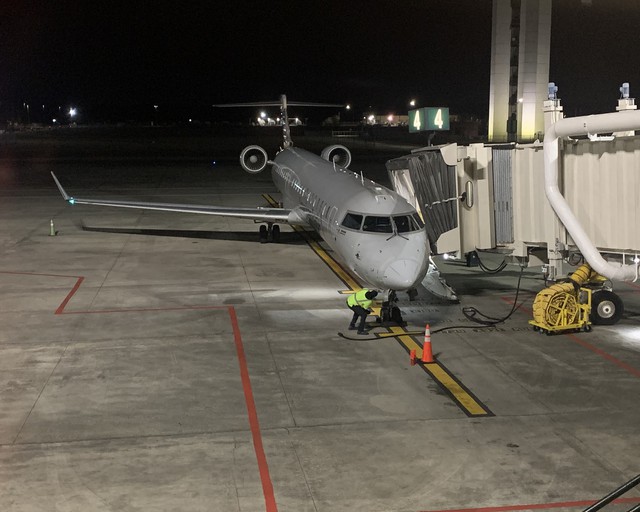 #48 out of 78 Airlines A minimum of 10 flight-reports within the past two years is required to appear in the rankings. 64 reviews

This trip report highlights a recent business trip I was on, with a one-way flight to Savannah and a subsequent trip report to follow on Piedmont Airlines flying from Richmond. February 15th’s flying was operated by PSA Airlines on what was supposed to be a Bombardier CRJ-700, but substituted for the larger Bombardier CRJ-900 to accommodate an equipment malfunction that delayed the flight by about four hours, leading to lots of impatient travelers scattered amongst PHL’s F terminal.

Bonus : Click here displayhide
This flight is usually scheduled on PSA’s CRJ-700, in a C9Y56 - 65 seat configuration, but an equipment sub brought upon PSA’s larger CRJ-900, which is configured in a C12Y64 - 76 seat configuration. 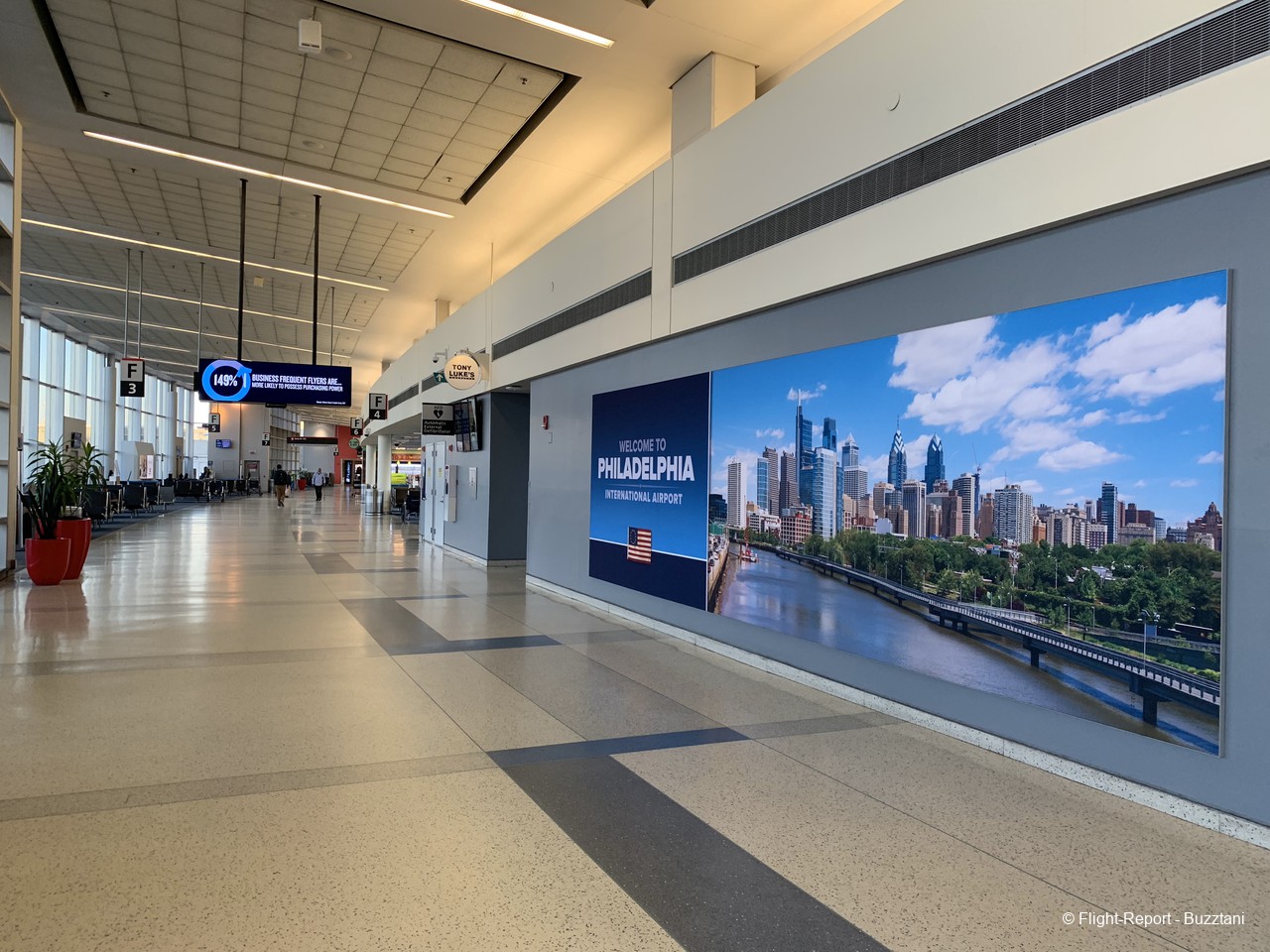 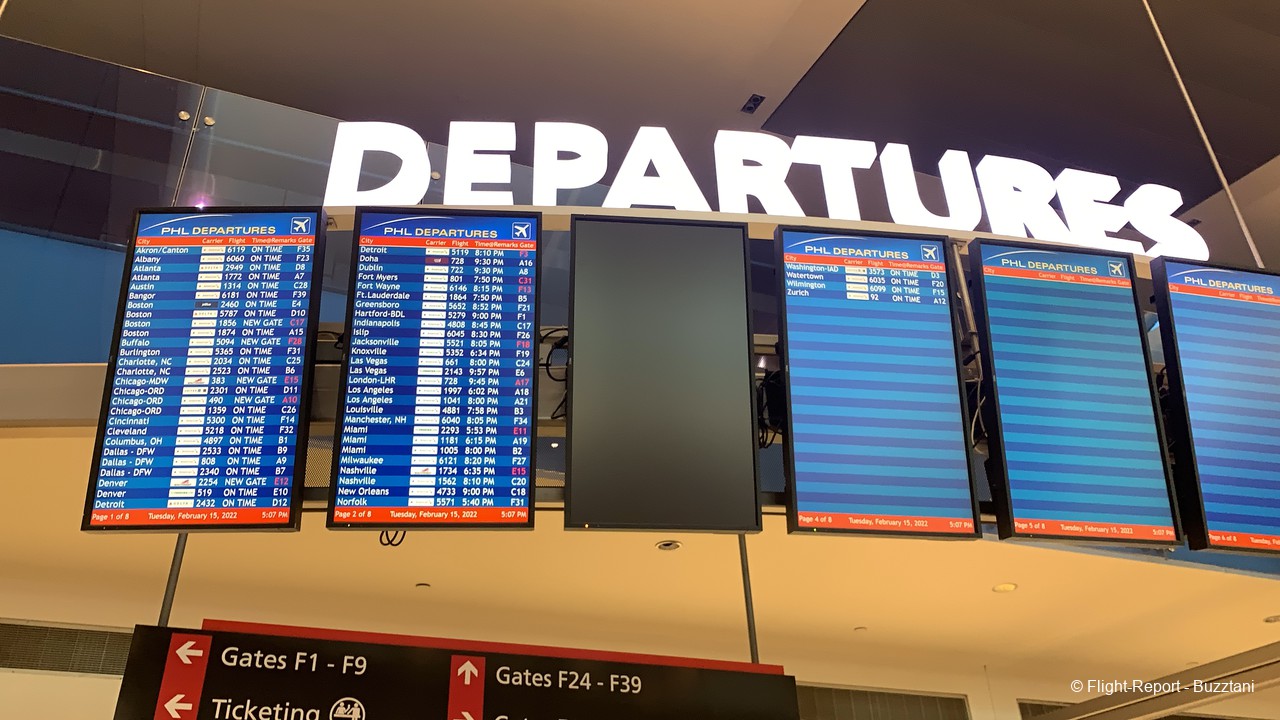 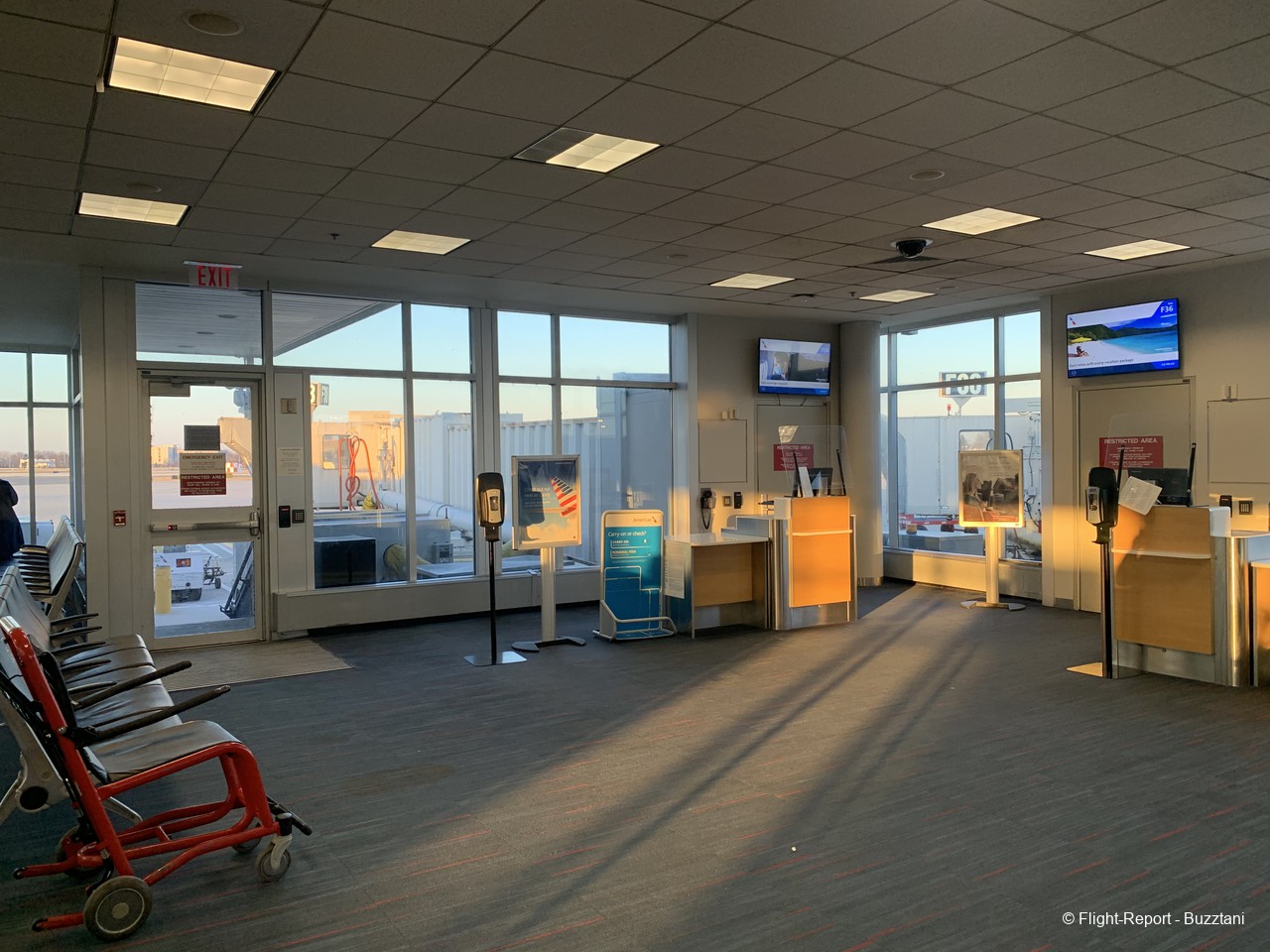 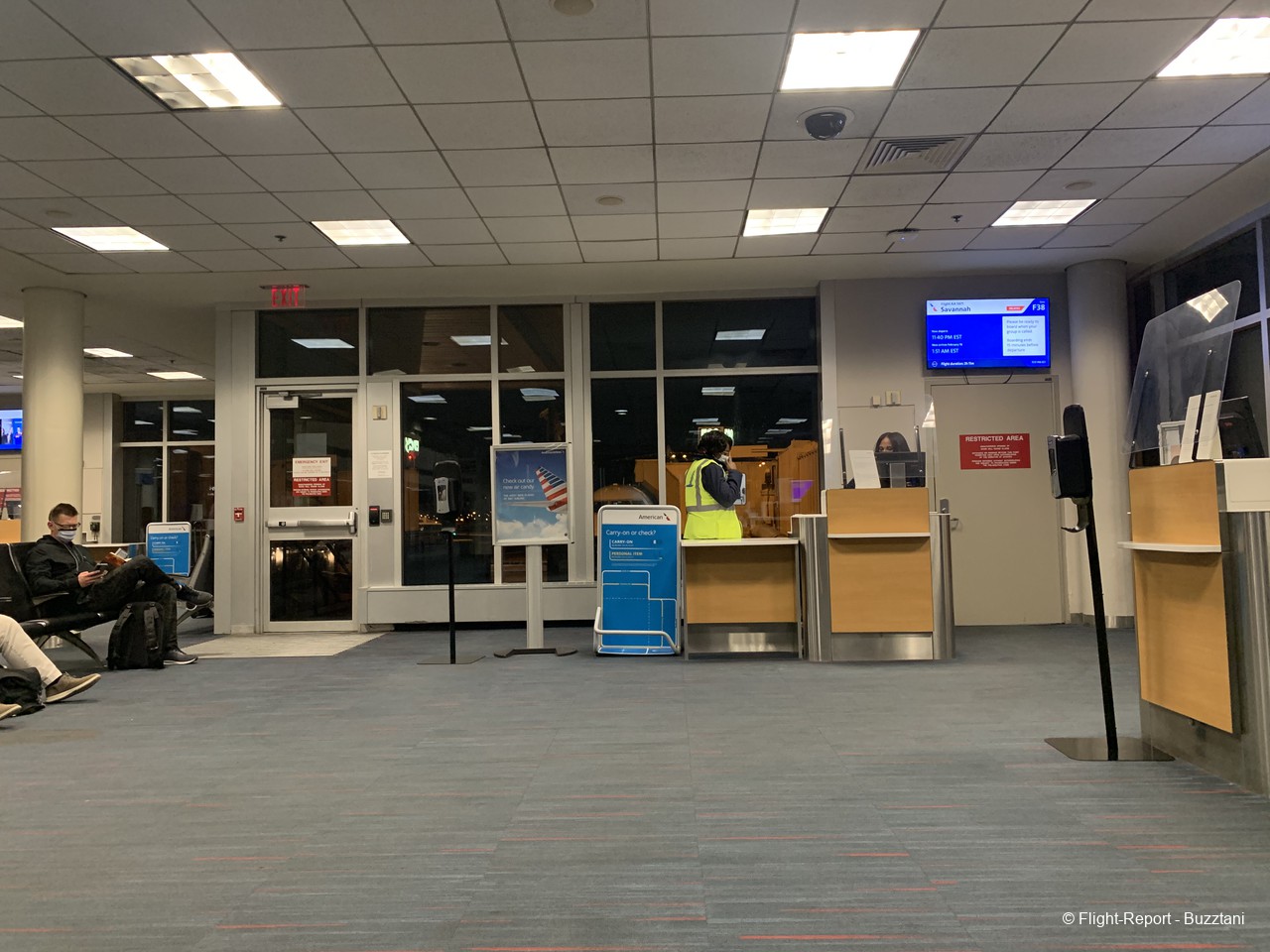 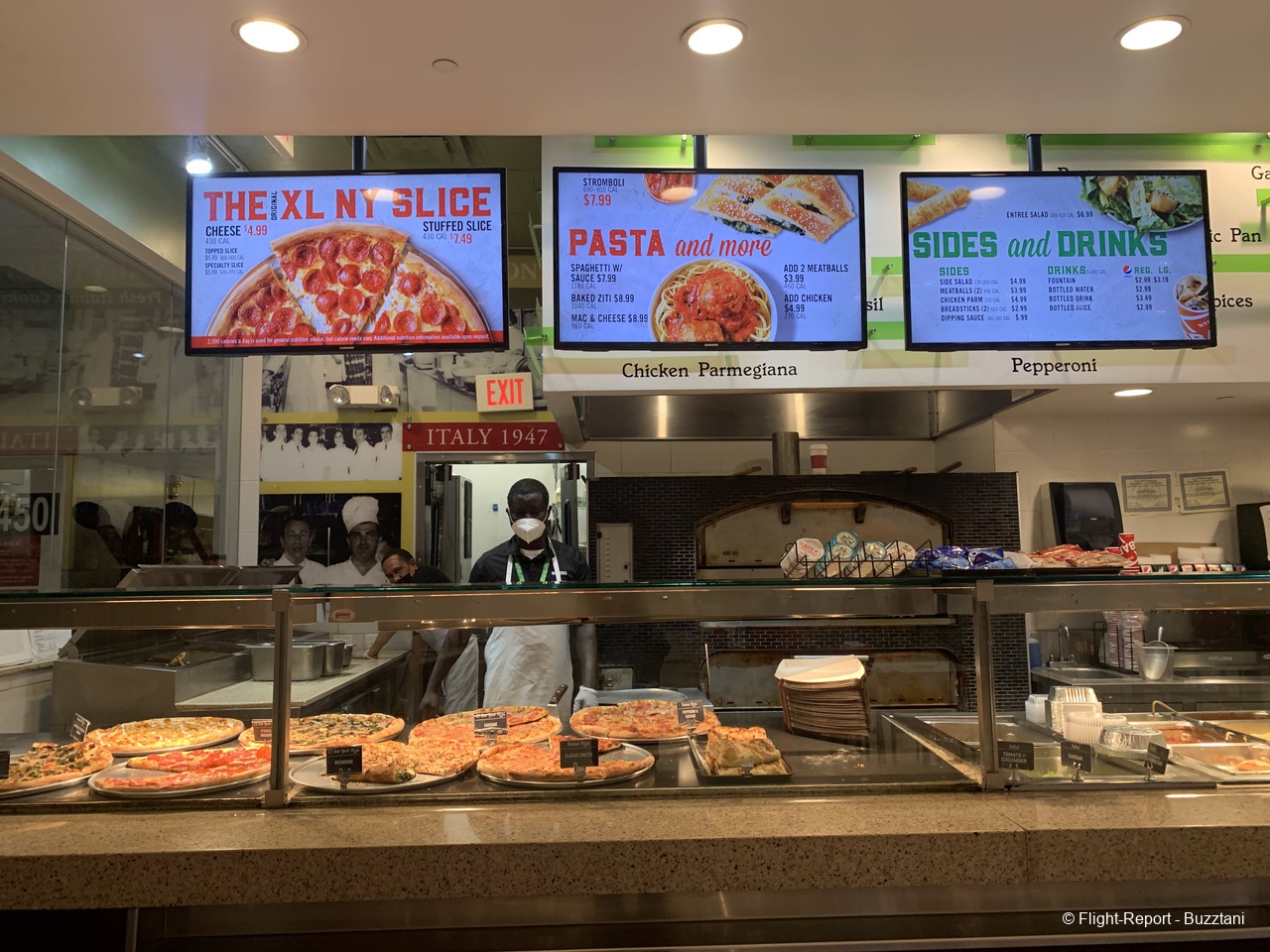 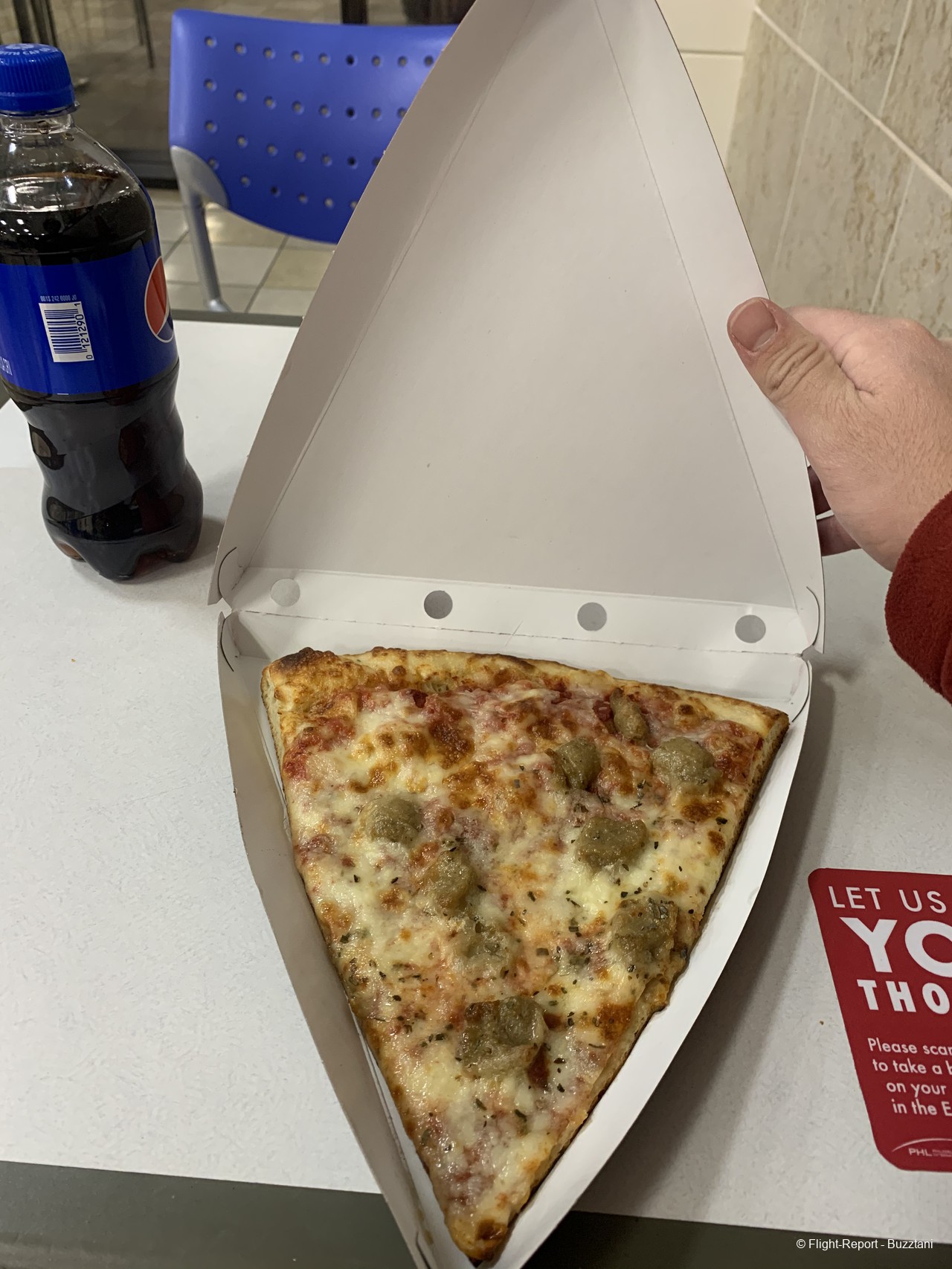 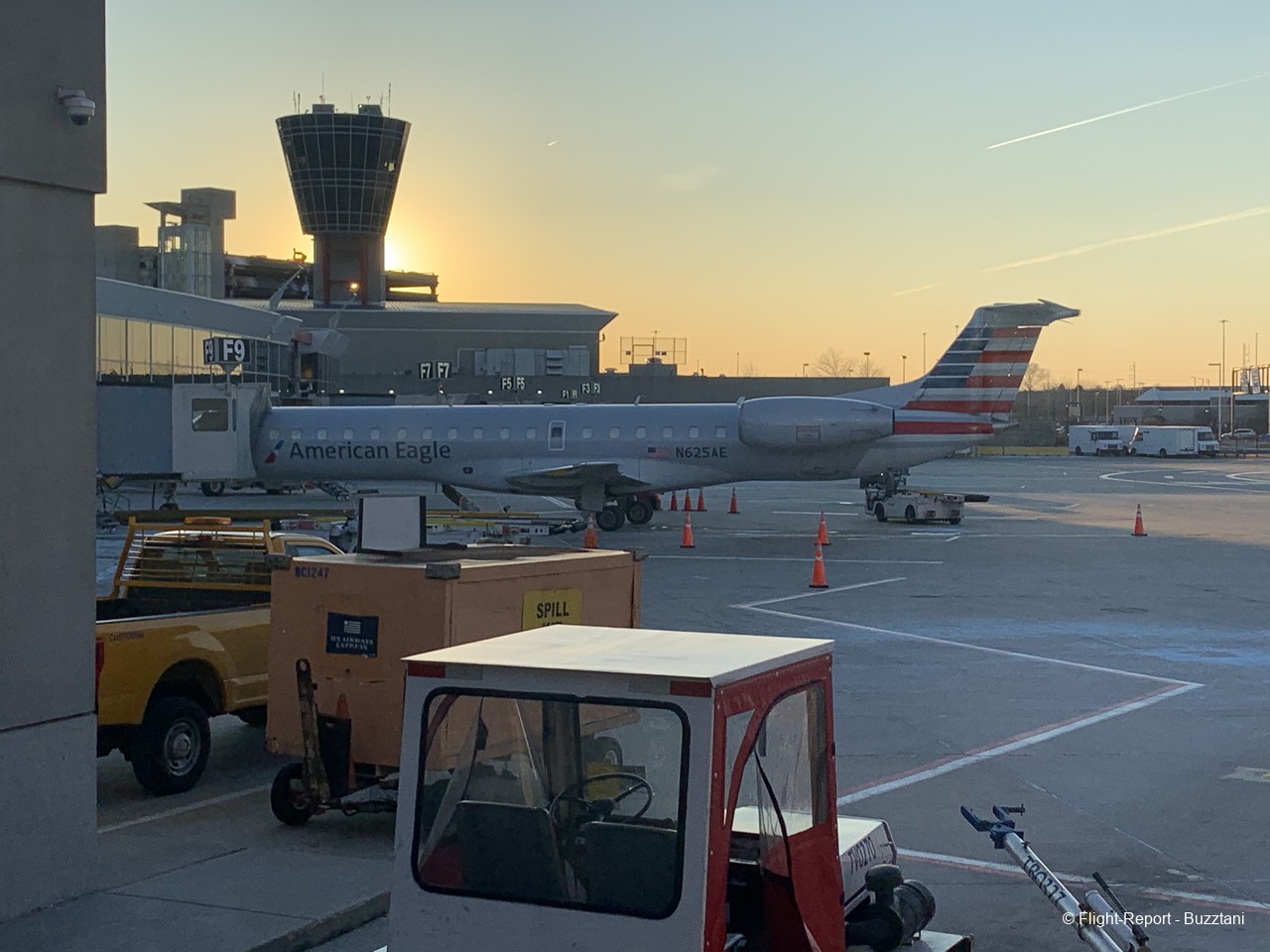 I had arrived at the airport at about 5 PM, unsure of what the security lines at F terminal would look like at this time of day. I was pleasantly surprised to be the only person in the security line and cleared in seemingly record time. It was then that I got a false notion of the trip going off to a great start. Philadelphia's F terminal is probably my favorite to travel from as all looks up to date on the surface. The aesthetics of the terminal are probably some of the best I've seen in an airport with the capacity of Philadelphia. However, it ends with the ergonomics as finding a working power outlet seemed to be the challenge of the night.

After walking to find my gate, I realized that the flight was delayed for the first of many times throughout the evening. I took this as an opportunity to go terminal spotting and hunt down food. F terminal does not provide for the best terminal spotting, as it is littered with American Eagle CRJs and ERJs, not providing too fun of a variety. Food, on the other hand was of an abundance. The terminal featured no less than two bars, a Sbarro, a Tony Luke's cheesesteak joint, a Le Bus (which was closed), a burger joint and a Philadelphia Pretzel Factory. My first choice was to go sit at the bar, but since I didn't think to provide proof of vaccination, I was not permitted to enter. I then went to Sbarro to grab some pizza and dwell on violating post-COVID travel rule 1. I had five hours to kill and with night falling, plane spotting was frivolous so I roamed the interconnected terminals, socialized with fellow passengers, and texted with friends to pass time.

The hours kept progressing slower and slower until on the virtual horizon, while an empty PSA Bombardier CRJ-900 made its way to Philadelphia from Birmingham, Alabama. This just so happened to be where the original PSA Bombardier CRJ-700 had a mechanical cancellation. At 11 PM, the airplane landed and I checked in with the gate agent to get my free First Class upgrade from flying non-revenue. With three additional first class seats, I was not the only passenger to receive a free upgrade. After a brief cleaning, the boarding process commenced and the end of the travel day was in sight. 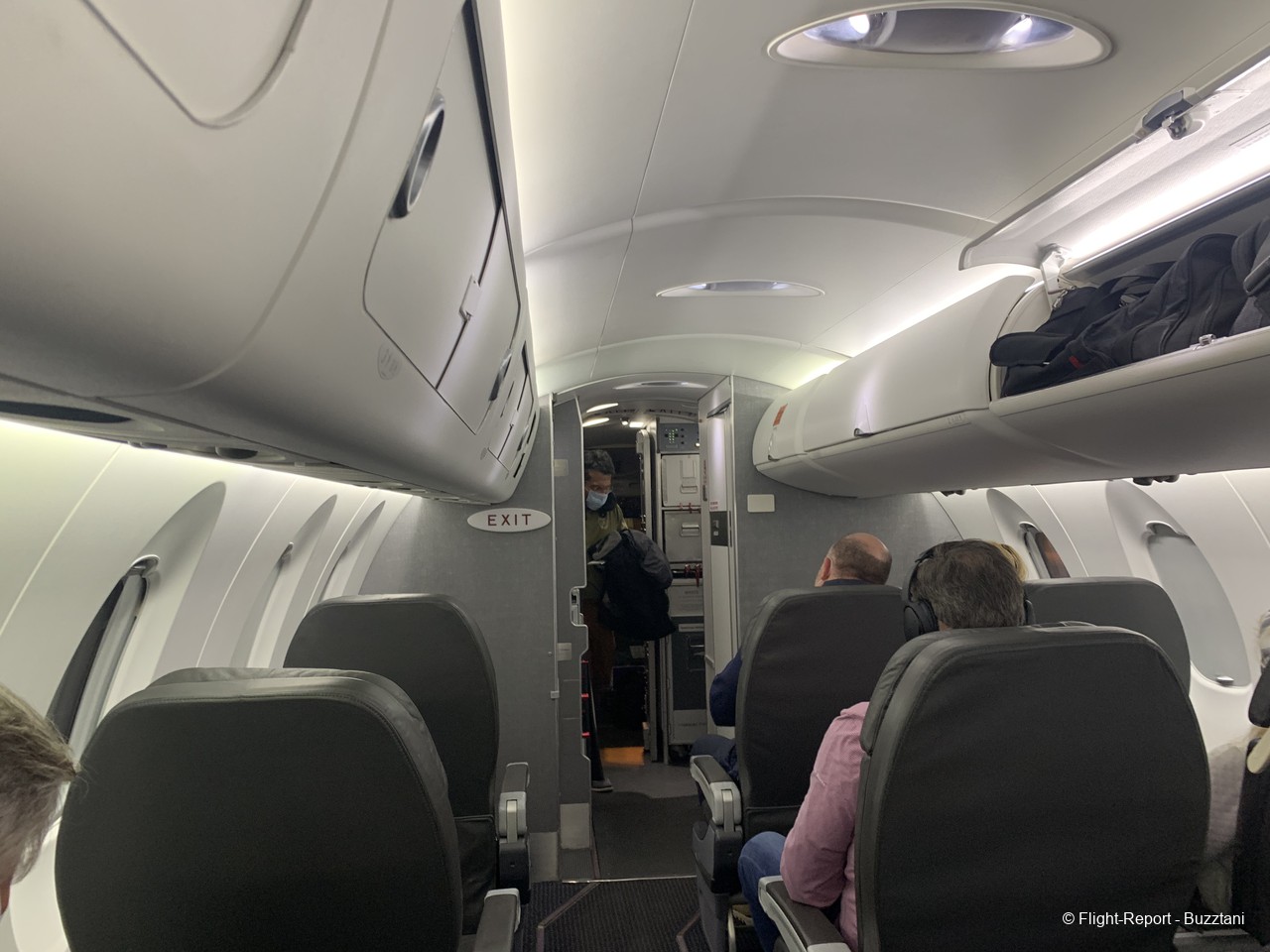 PSA's Bombardier CRJ-900 is configured in a C12Y64, meaning 12 first-class seats and 64 economy/economy plus seats. Essentially, first class on the Bombardier CRJ-900 is just priority boarding, a nice chair, legroom, and priority non-alcoholic drink/snack service. Regional first class is in terms business class on a mainline. I had one seat in my row, making this a window and an aisle seat at once. The flight attendants were very nice and energetic, although the flight was technically operating tomorrow, as they joked.

Pushing back, a collective sigh of relief was sensed throughout the cabin of the airplane. The engines started and being the only airplane operating this late at PHL, we were quickly off of PHL's Runway 27R and turned enroute to Savannah, Georgia. Up at cruise altitude of FL320, the flight attendants passed through with snacks and drinks. I opted for a Coca-Cola and a 0.6 ounce bag of mixed nuts, which would hold me over for the hour and a half flight to beautiful Savannah, Georgia. 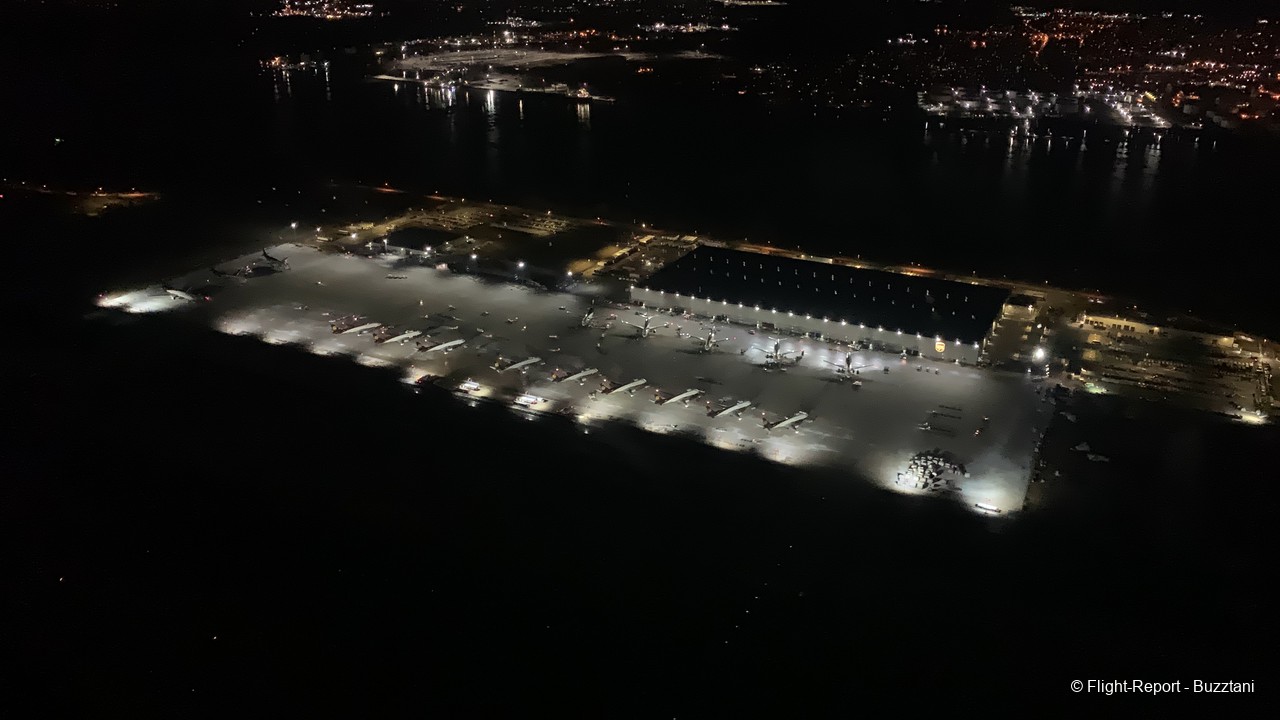 PHL's busy UPS base loading the night's turns, which will all be departing and arriving within the east coast and midwest before sunrise. 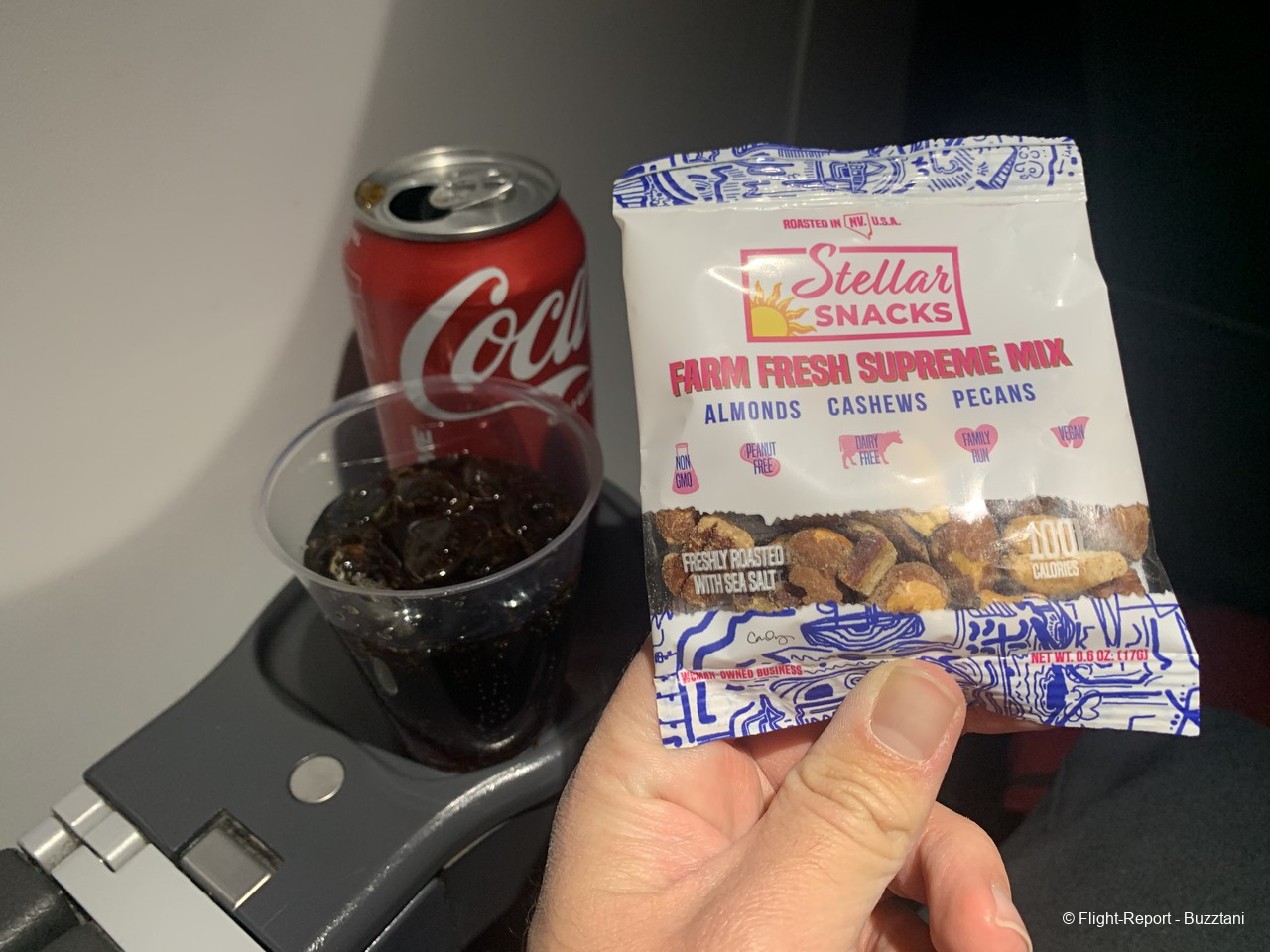 The first class snack and drink service. It was my first time getting the entire can of Coca-Cola on an airplane and I greatly appreciated that and the cup with ice The bag of snacks was quite delicious too - it's a shame it was only 0.6 ounces. 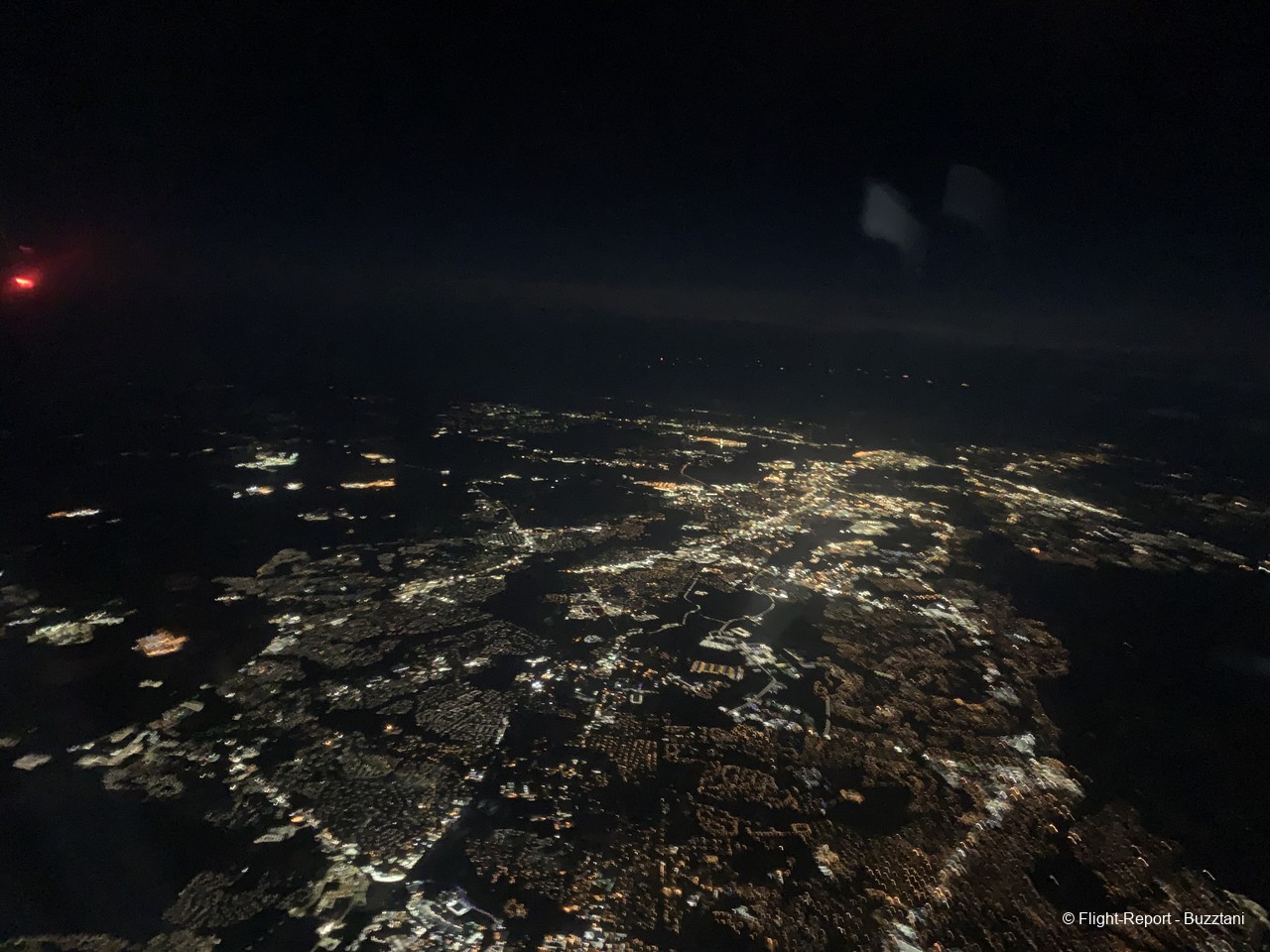 Passing over Norfolk, Virginia on the way to Savannah. It's hard to keep entertained on these red-eyes, so a scenic route is appreciated.

Paid promotion was executed perfectly. The inflight entertainment system was top-notch with movies, but Wi-Fi was $13 unless that is you have T-Mobile or Sprint. The in-flight entertainment system was good nonetheless with movie options such as Avatar, a live flight tracker, and weather for Savannah, Georgia, which we were on track to arrive at 1:30 AM. This system was not all too important for the hour and a half flight, with travelers yawning away after their four-hour delays. 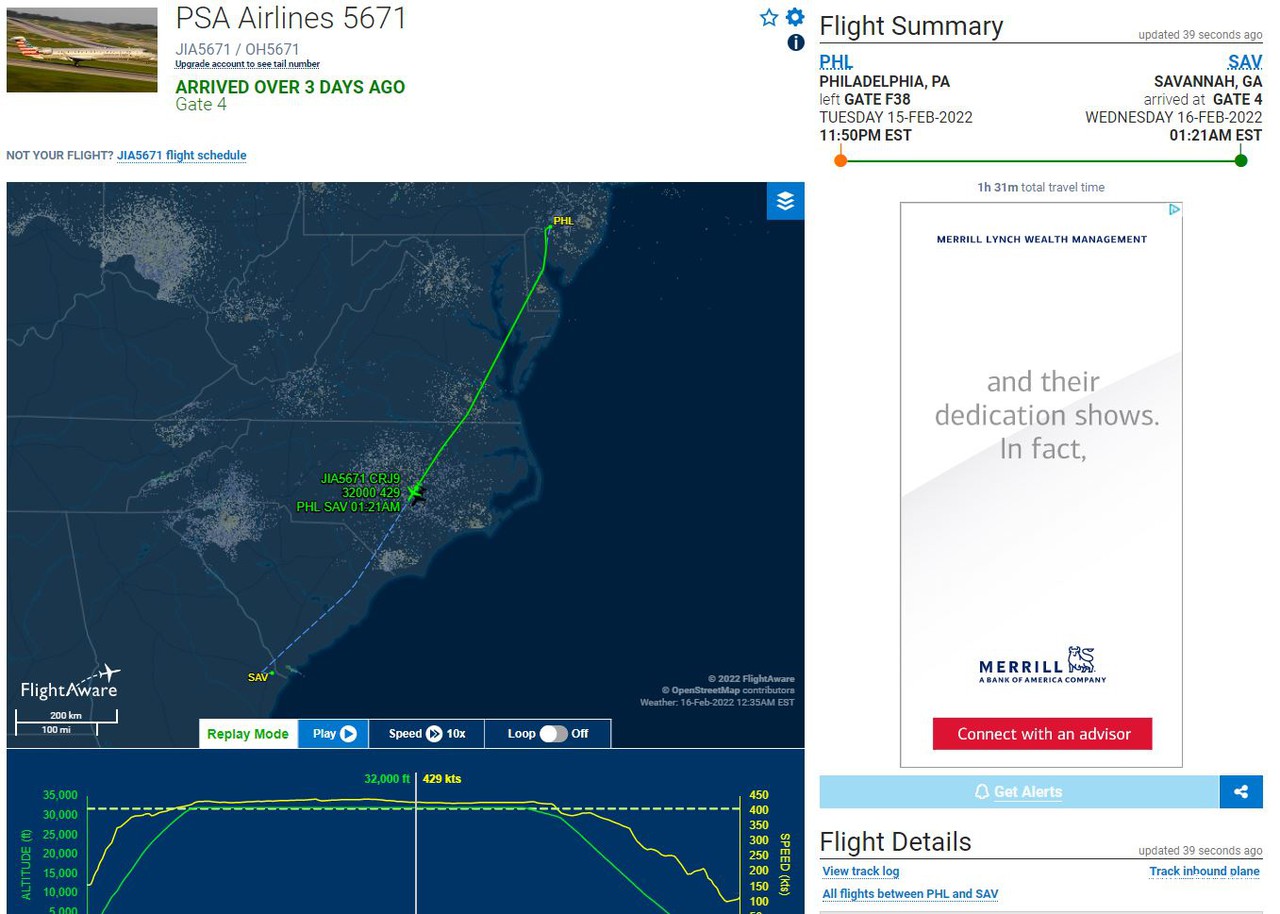 Arriving into Savannah's Runway 10, it became apparent that everyone was at their destination after the lengthy delay. The pilots who were most likely at the end of their reserve day gingered onto the brakes, and taxied to Gate 4. It was the end of a long day for most travelers, including myself and it felt so good to be at the tail end of it. American Eagle's CRJ-900 first class was an unexpected bonus to this trip and it was a blast to finally say that I have flown first class on an airline flight. A regional, but first class nonetheless. 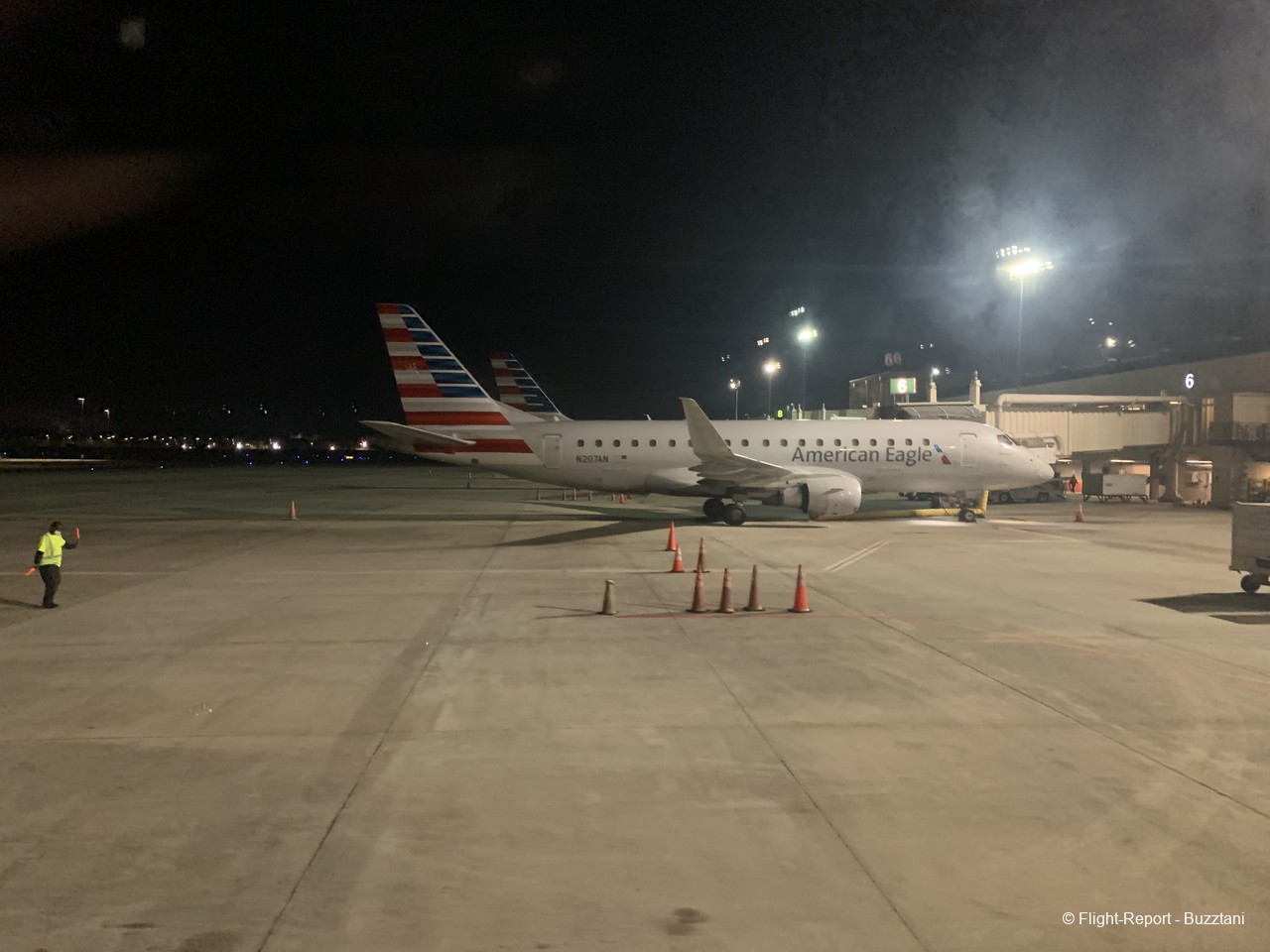 Parking at Gate 4, next to an even fresher Envoy ERJ-175, it was time to deplane and find the Uber to the hotel room. Normally, I would've spent more time looking at the terminal, but since it was 1:30 AM and I had to be up in six hours the next day, I rushed to find an Uber to my hotel room. Being the last flight in, Uber was hard to come across, but a comfortable half-hour sit netted me the 2 mile ride to my room from the rideshare pickup area. Other travelers were less lucky with their rides, but I was comfortably settled into my hotel room at 2:30 AM. One last peek at N577NN, the 7-year old Bombardier CRJ-900 that I experienced my first taste of first class flying on.

First Class on the American Eagle Bombardier CRJ-900 is good for if you do not like the 31 inches of pitch provided in Economy Class. On this configuration of CRJ-900, the first class seat pitch is 37 inches, providing you with an extra half-foot of room. It should be noted that the exit row provides you with a seat pitch of 35 inches and it is more likely to get lucky and be told to sit next to the exit row on the CRJ-900. Or better yet, you pay less for Main Cabin Extra and only sacrifice 2 inches of seat pitch. First-class on a regional carrier is not the same as first-class on a mainline carrier, as more comfy seats, priority boarding, and priority non-alcoholic drink service are the only real benefits of it.