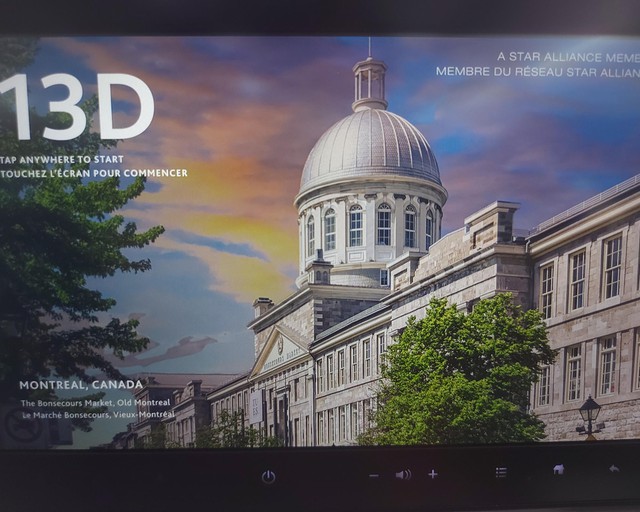 #20 out of 79 Airlines A minimum of 10 flight-reports within the past two years is required to appear in the rankings. 348 reviews

I’ve flown many times from Iceland to Canada/US but it’s always been with Icelandair. This time I booked an open-jaw flight with Air Canada from Keflavík (KEF) to Montreal (YUL) to Halifax (YHZ) and from St John’s (YYT) to Toronto (YYZ) to Keflavík. The price was reasonable in economy class for about 500€ return. Premium economy class on the international segments (and regular economy on the domestic ones) would have been around 1500€ - that’s definitely not reasonable. Business class was not available for this booking.

I booked in Galileo, a GDS for travel agencies and I couldn’t access my booking on Air Canada’s website until check-in started. My allocated seat was 16A, a window seat with a misaligned window. I changed it to 13A, a “preferred” aisle seat with extra legroom and, according to the check-in page on Air Canada’s website, priority boarding. It was expensive for about 100€.

Keflavík Airport is being extended. Tourism in Iceland has reached pre-covid levels this year and a further increase is expected for next year. There were two check-in desks for this flight and absolutely zero passengers. I had already checked in online. 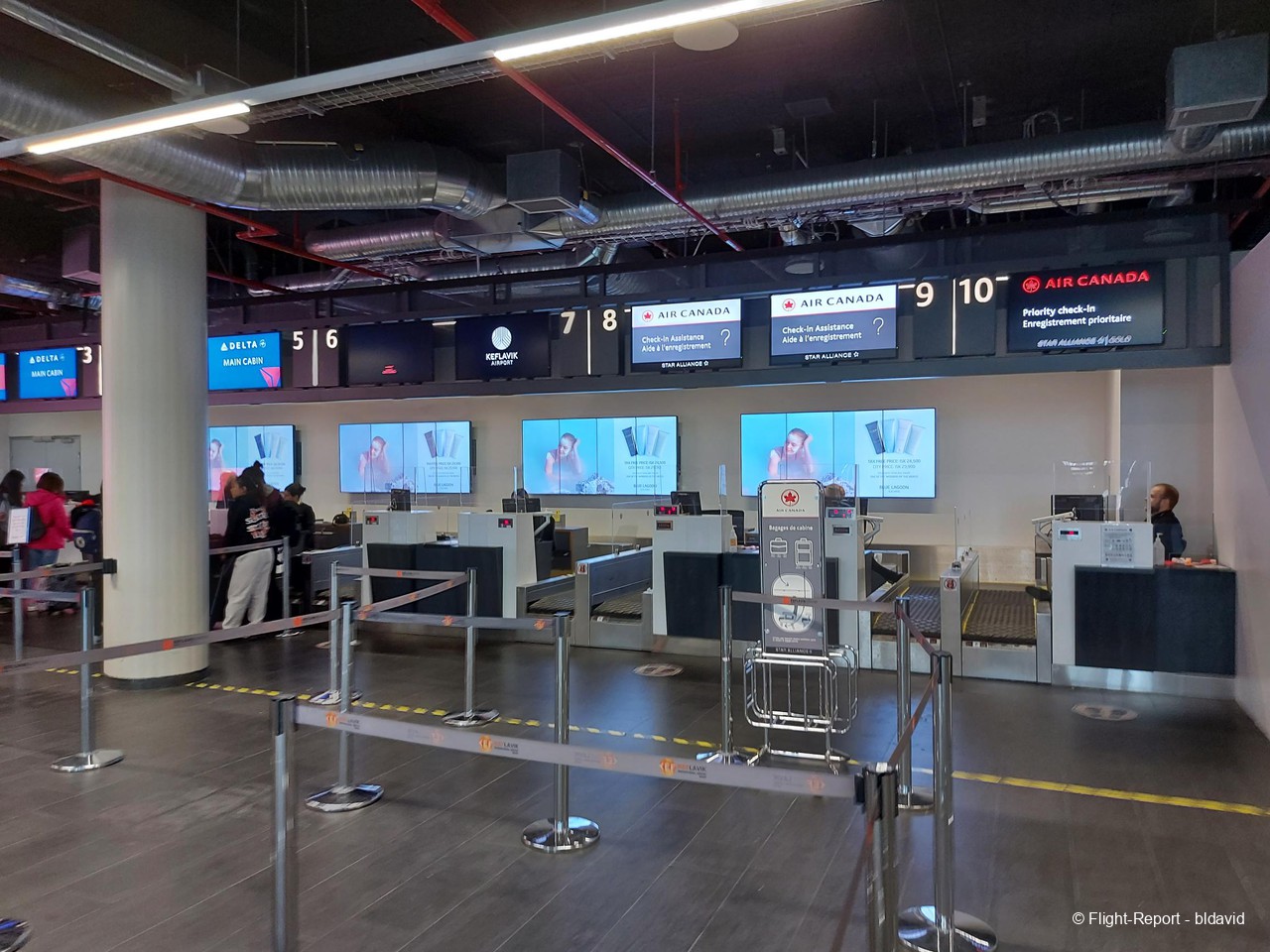 There was a queue for security with a group of Greenlandic kids but waiting time was not more than 5 minutes.

Icelandair’s numerous morning flights had already left by the time I got to the airport but the terminal was still quite crowded as many other flights were about to leave: Easyjet to Milan, London and Manchester, Transavia to Nantes, Delta to Minneapolis, Icelandair to Nuuk and Boston and my Air Canada flight to Montreal.

Although Iceland has a huge shortage of workforce the airport managed to keep most of its employees and it does not experience the same difficulties as London Heathrow, Amsterdam Schiphol and many other airports in Europe.

There was zero waiting time at passport control.

There’s a shopping area in the non-Schengen zone. 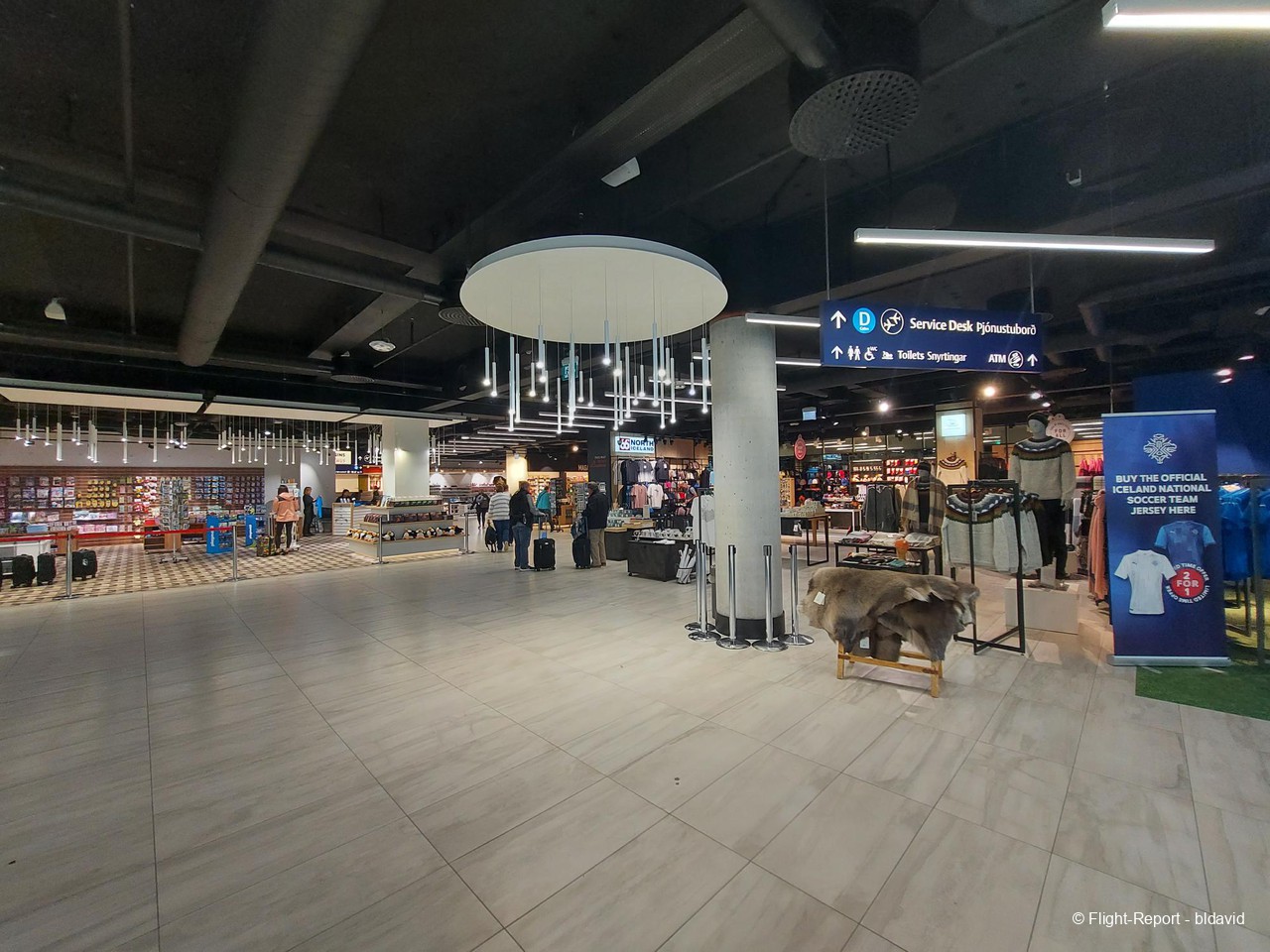 My boarding pass showed that I was in zone 5 for boarding – that’s definitely not priority. I discovered only later on the airline’s website that “Due to COVID-19 restrictions, we have modified our boarding zones to allow for adequate social-distancing between customers, therefore priority boarding for preferred seating is currently suspended until further notice.” But when I was offered to pay for a preferred seat it clearly included priority boarding.

Boarding was a bit chaotic. There were two lines – zones 1 to 3 and 4 to 5 – but this was only communicated verbally by the gate agent and there was no signage. 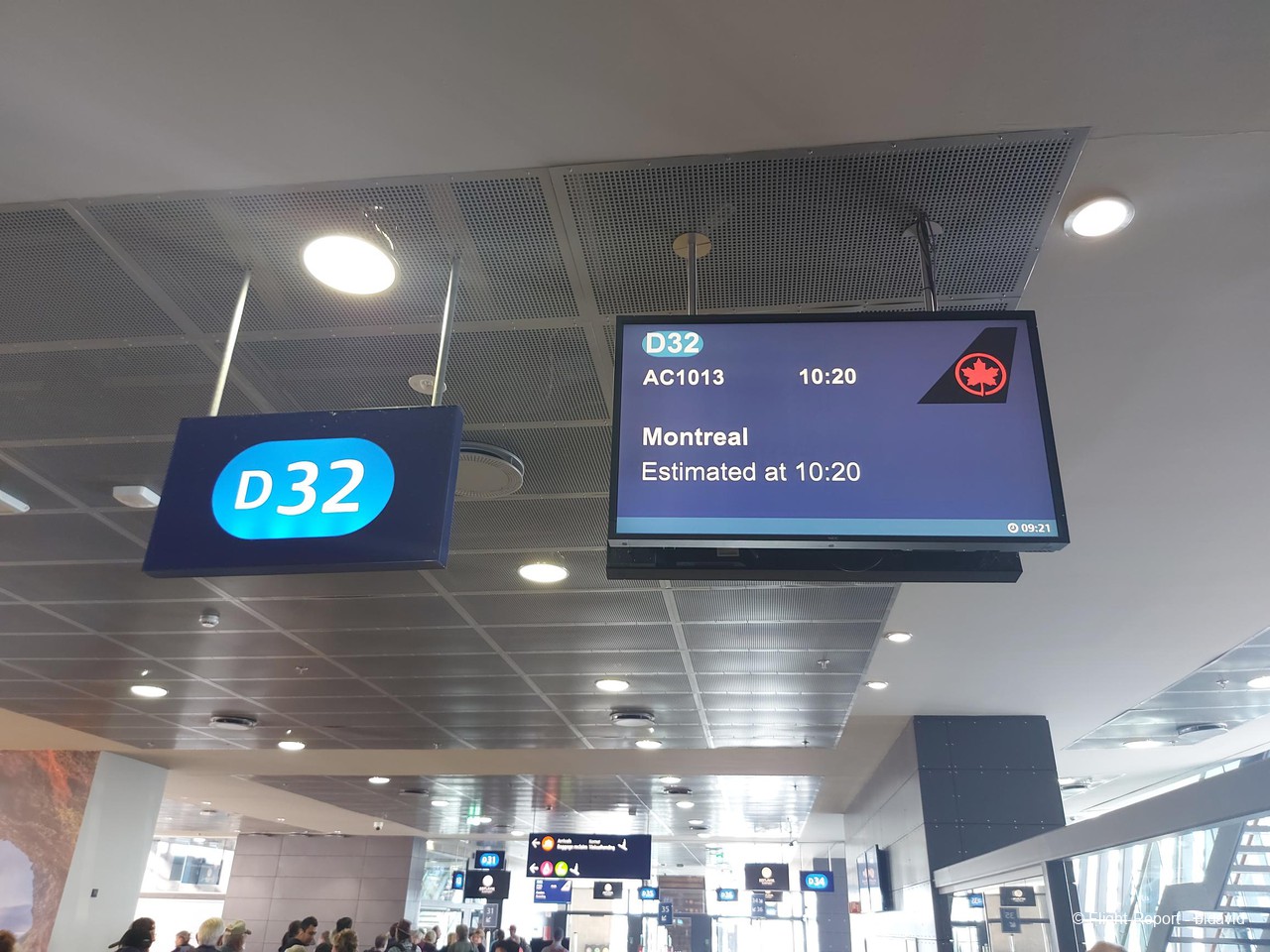 Only my passport was checked at boarding. I was not asked to show my eTA, ArriveCAN or vaccination certificate.

I entered the plane at 10.18 and I was offered a face mask in lieu of a welcome.

There are four rows of US Domestic First Class type business class sold as premium economy on this flight. 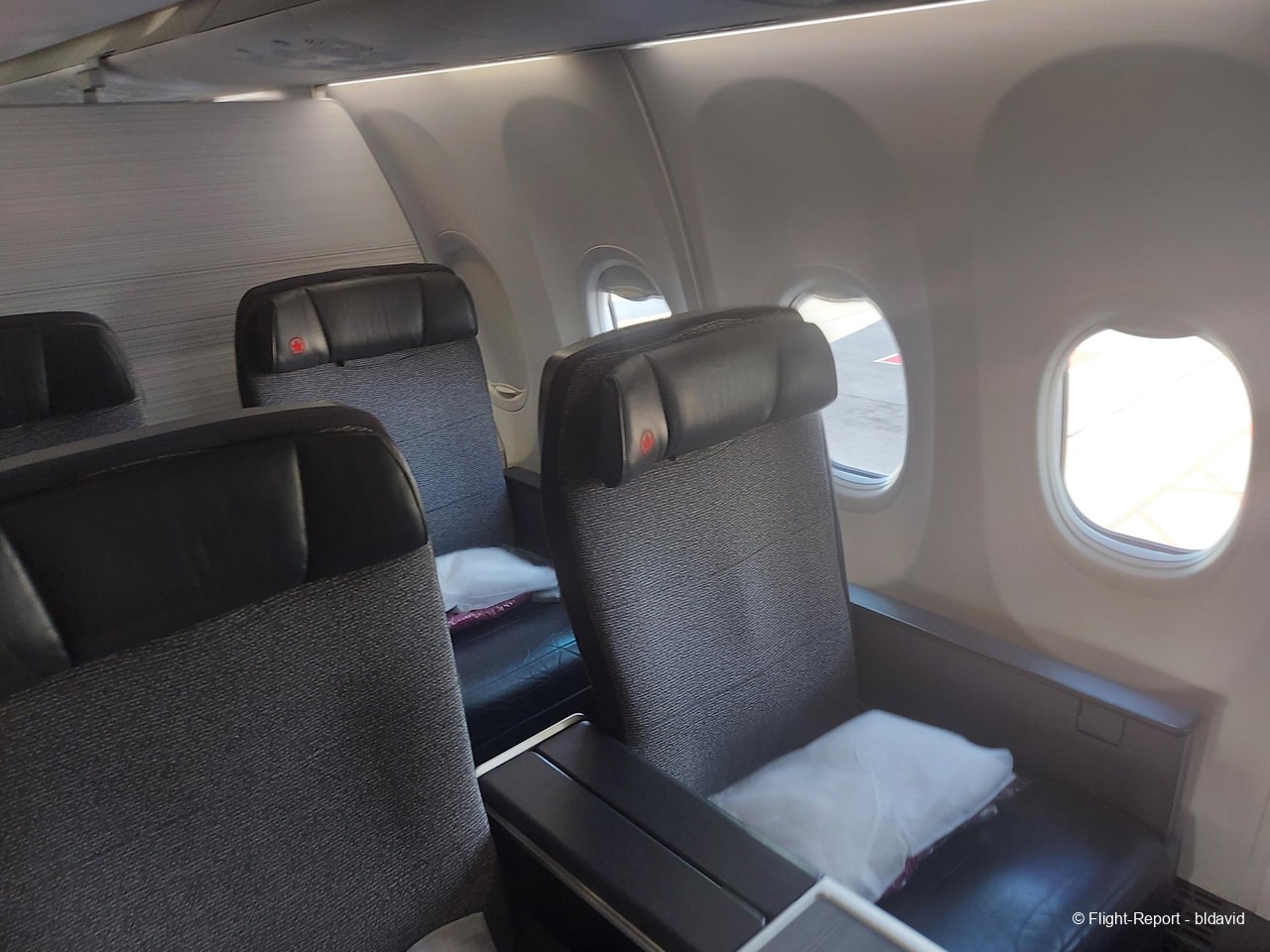 There are no rows 5 to 11. Seat 13D is an aisle seat in the second row in the economy class cabin. 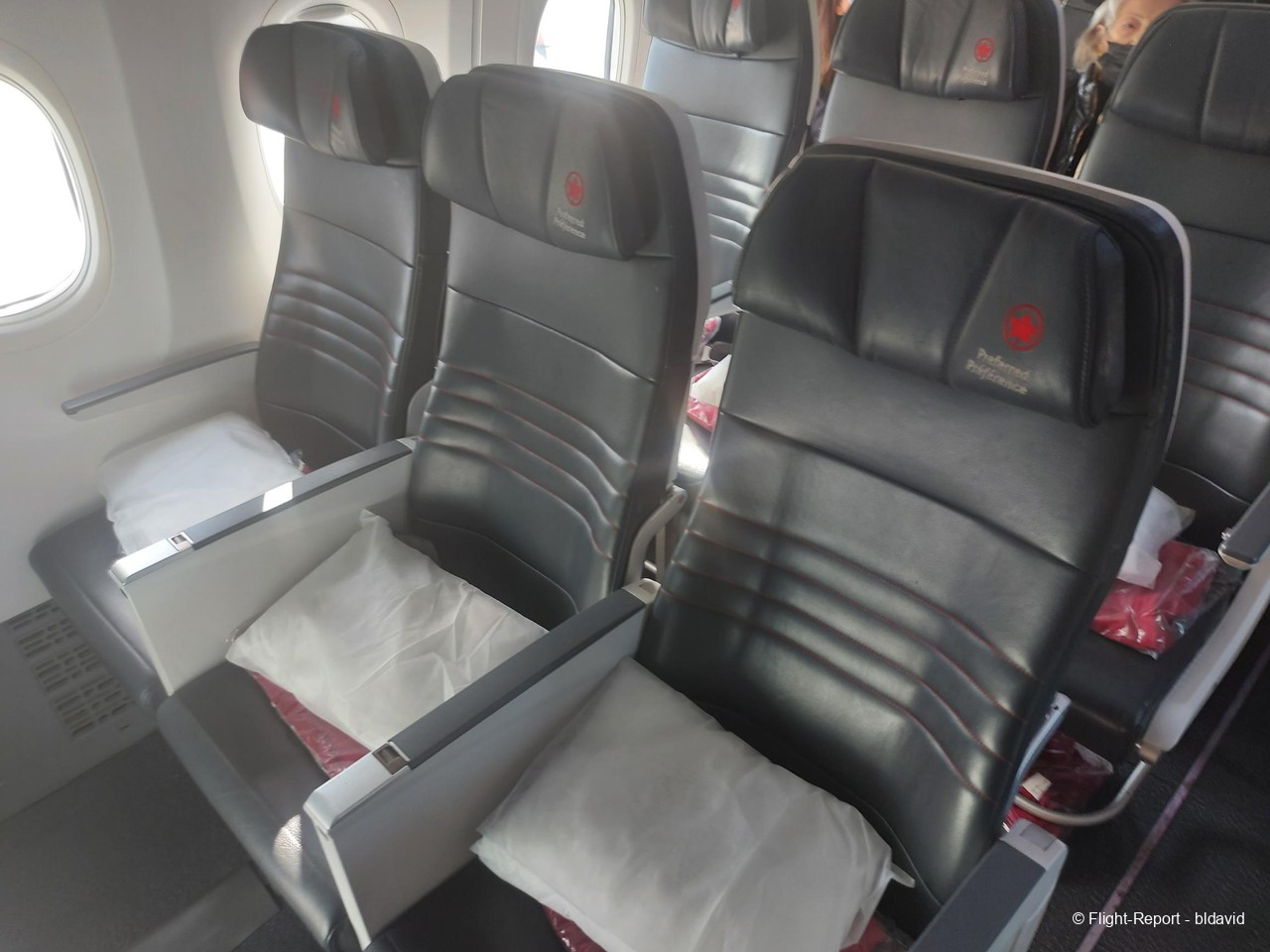 Legroom is very good. I wouldn’t say it’s worth an extra 100€ for this flight but it’s definitely worth more than a regular seat. 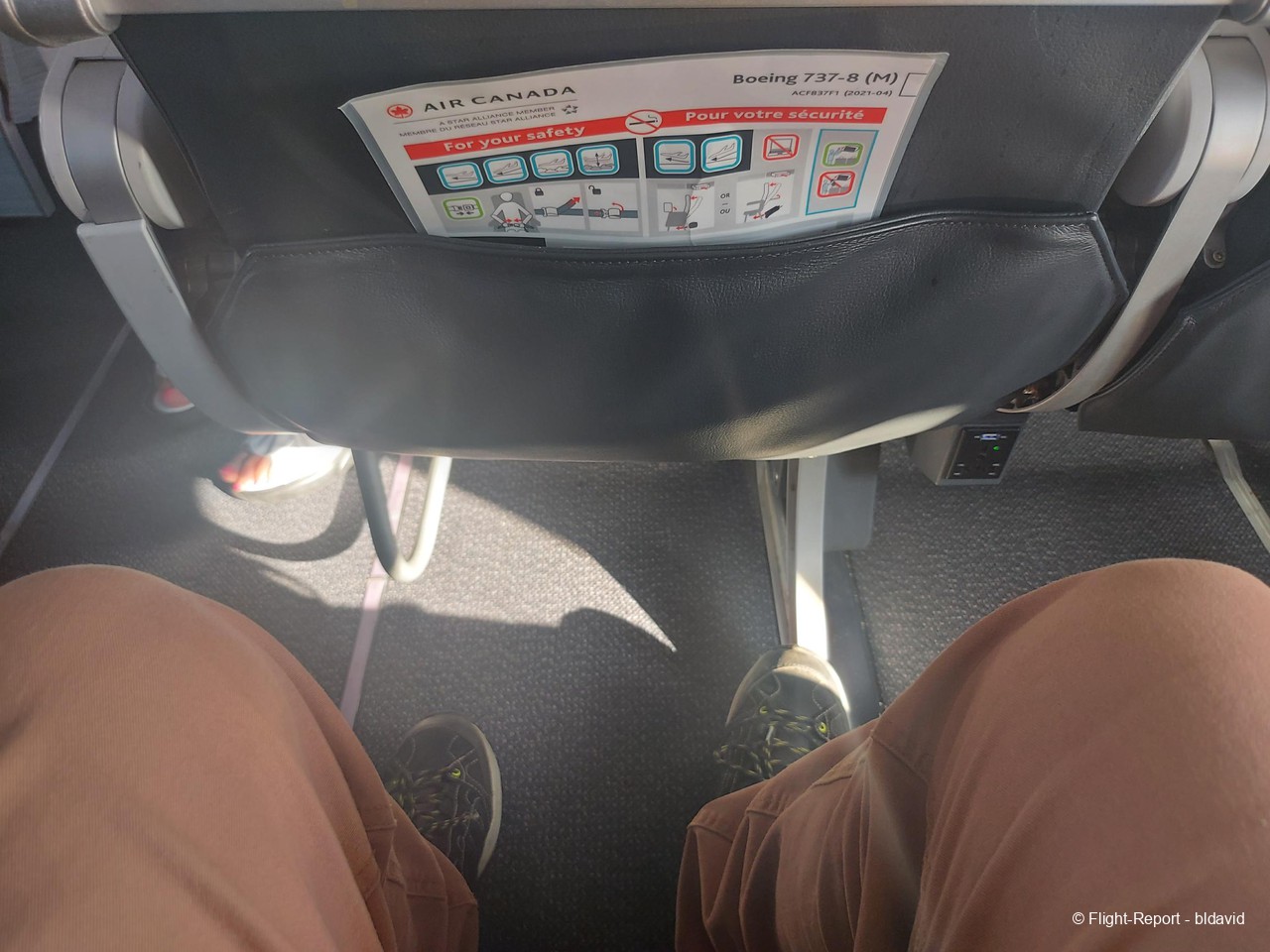 The seat next to mine was unoccupied which also made the flight a lot more comfortable.

A blanket and a pillow were on the seats. 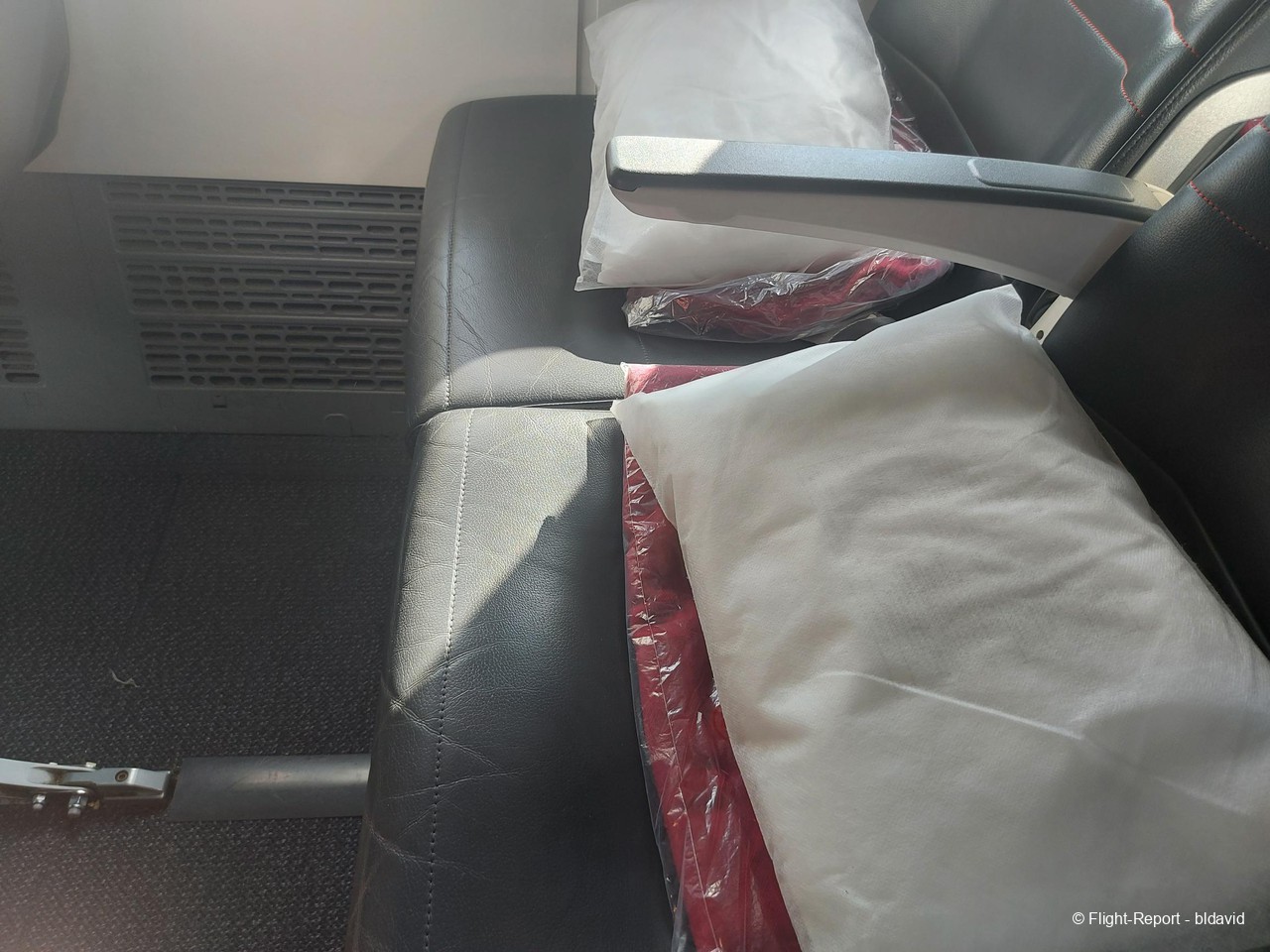 This is what 12F bulkhead seat looks like. The IFE is on the bulkhead wall and not a fold-out from the armrest as stated incorrectly on Seatguru.com. 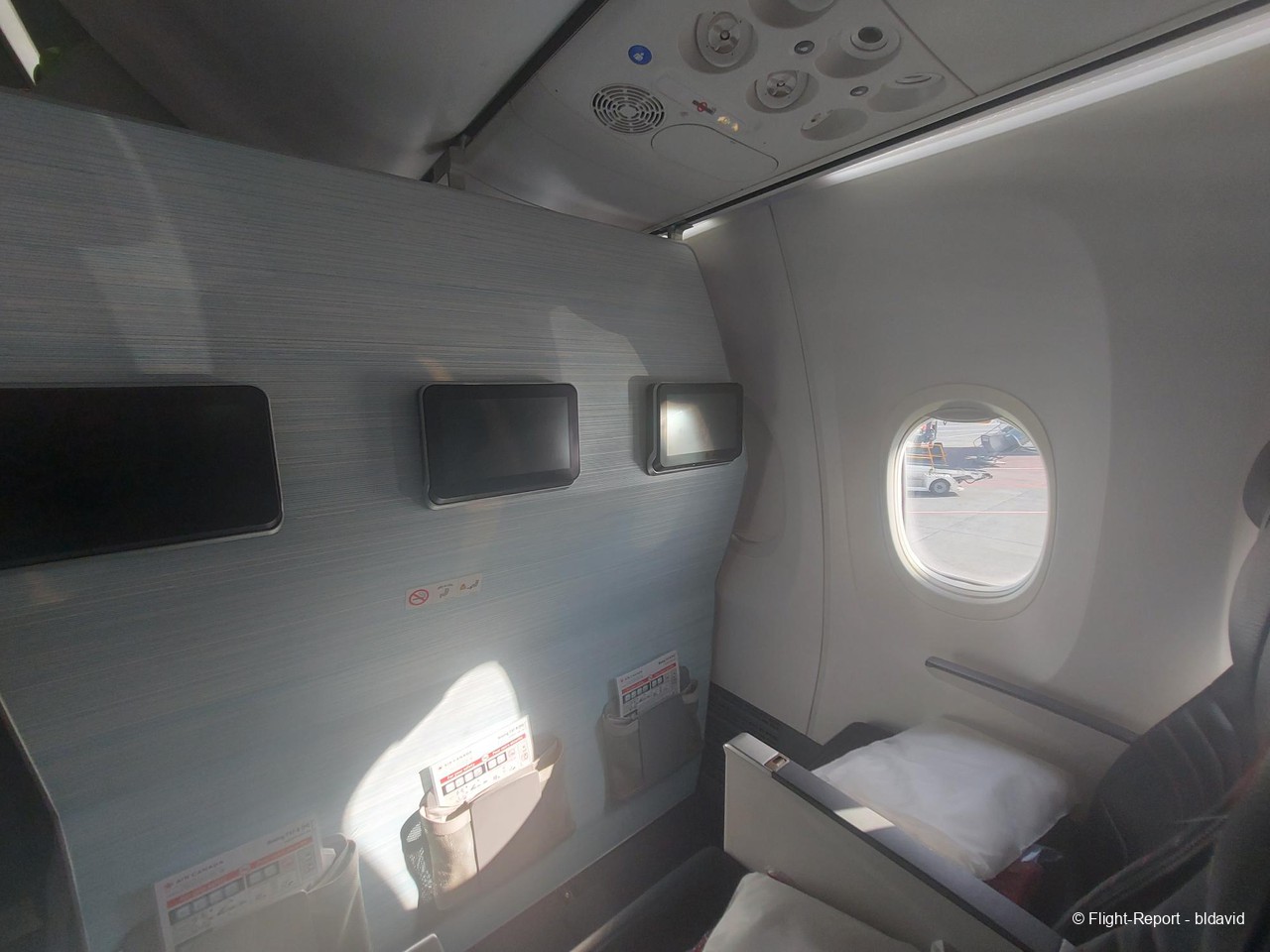 You can charge your phone at the seats and the charging speed is quite good. Simple headphones were offered free of charge after take-off. I had my own so I didn’t take them.

A complimentary drink and meal service started about 45 minutes after take-off. Soft drinks, tea and coffee were offered but wine was also available on request. 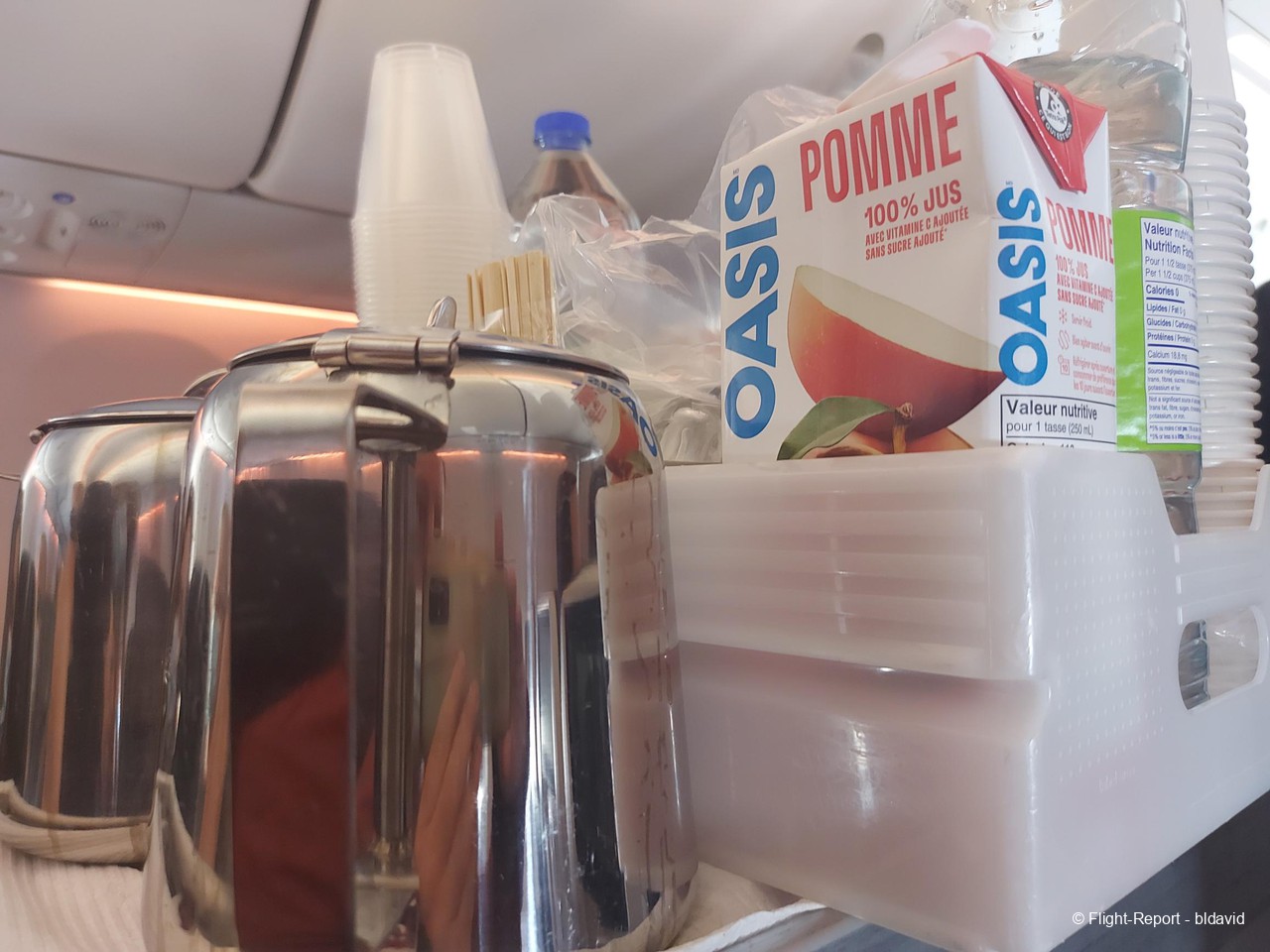 A hot meal with a salad, bread and a cake was included in the price. 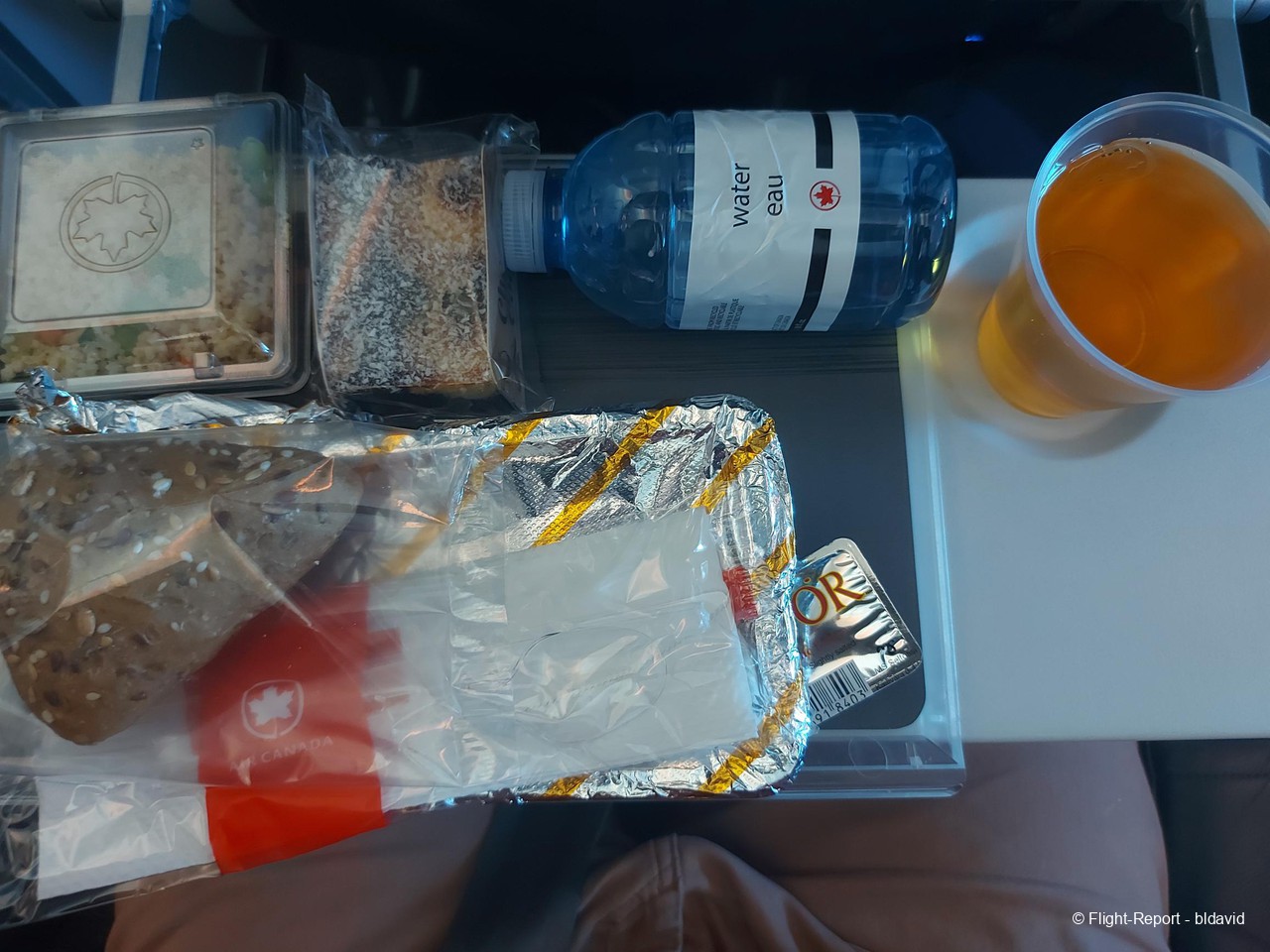 The salad was quite good. 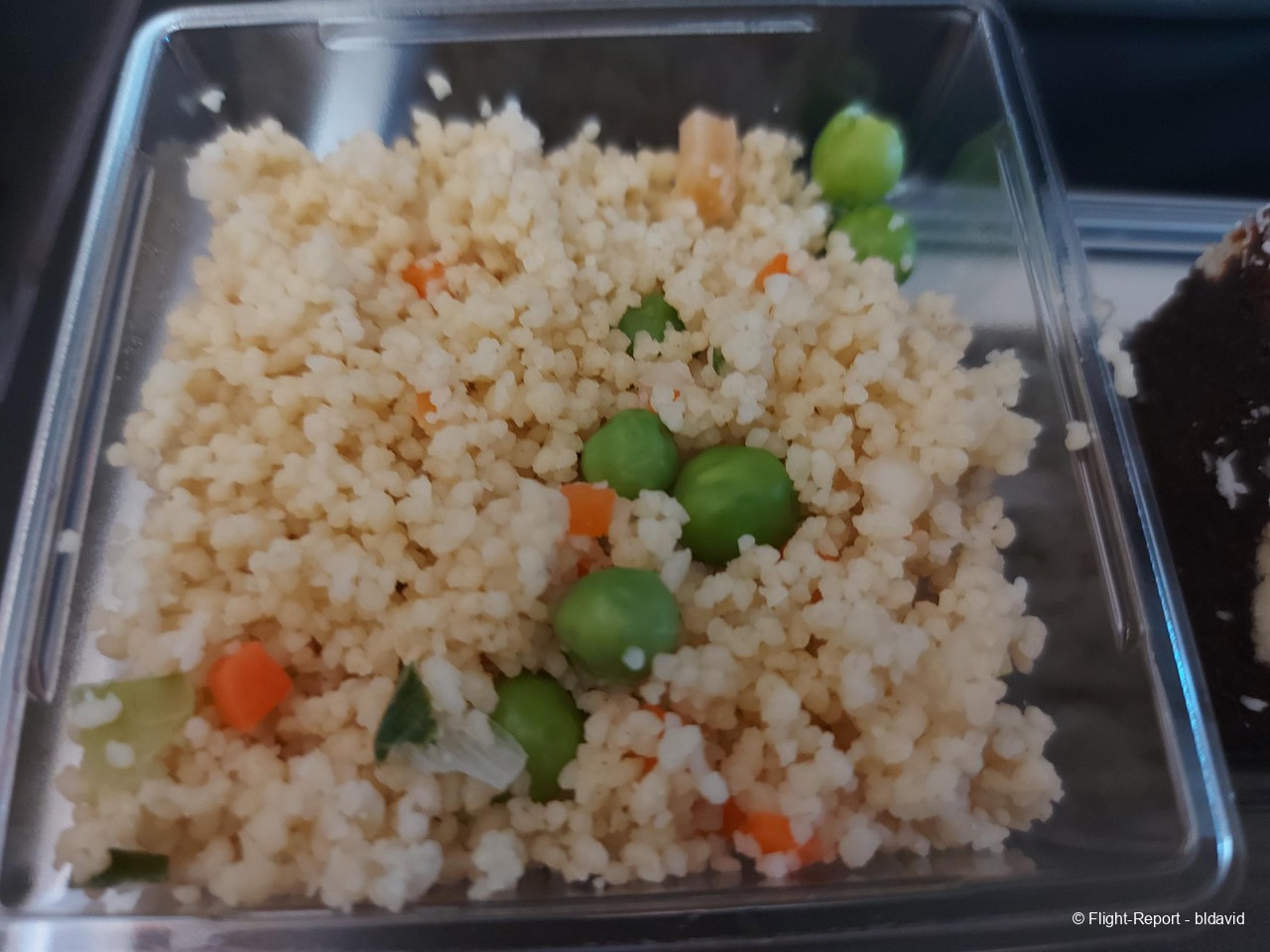 There was a choice of chicken and pasta. I choose chicken. The chicken and the carrots tasted OK; the mashed potato tasted very industrial. The portion was too small. 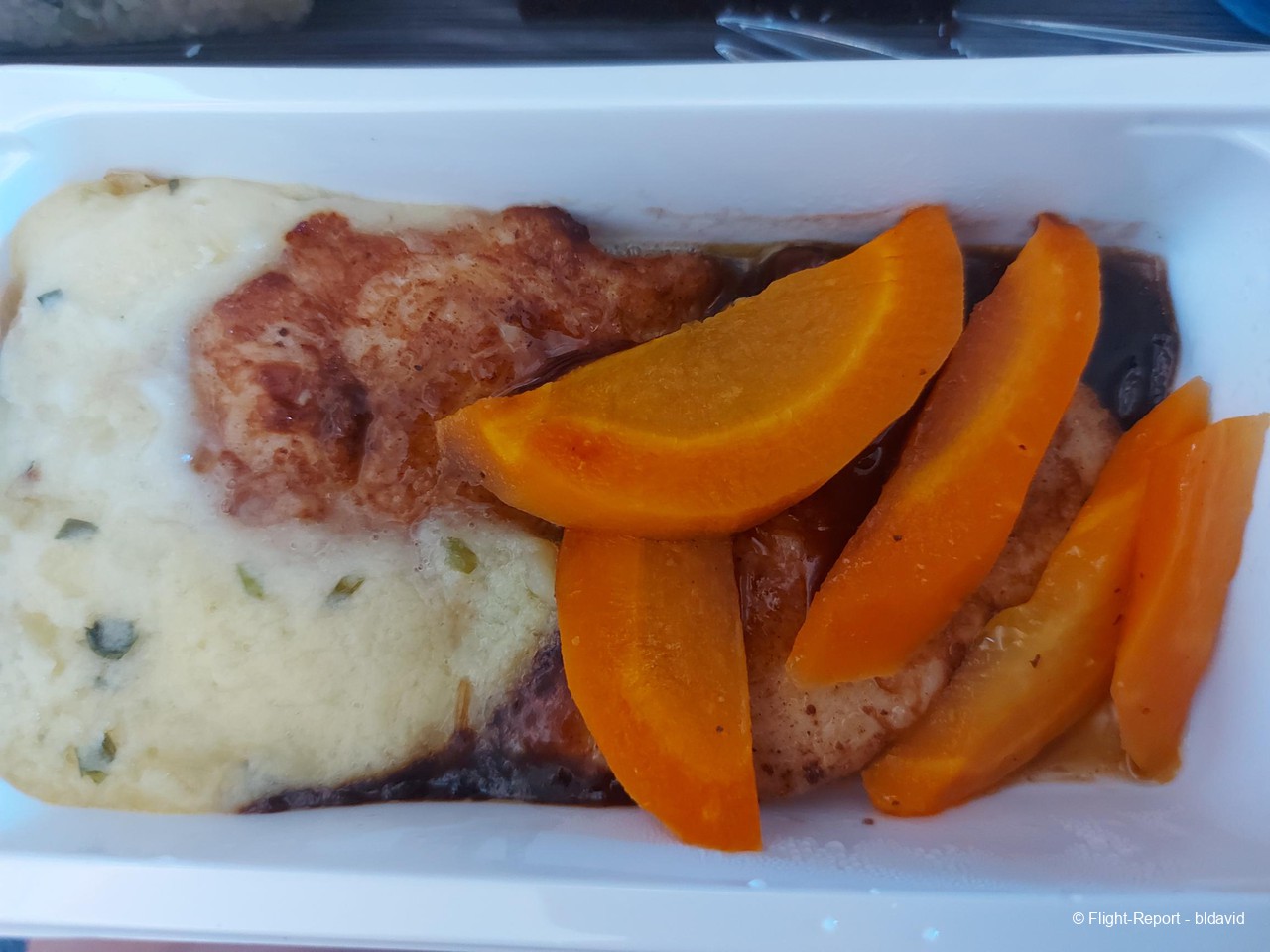 The cake was also quite industrial but tasted OK.

The crew was OK. They did their job but didn’t go the extra mile.

Air Canada offers some of the best in-flight entertainment in North America. The screen was of reasonable size and easy to use. 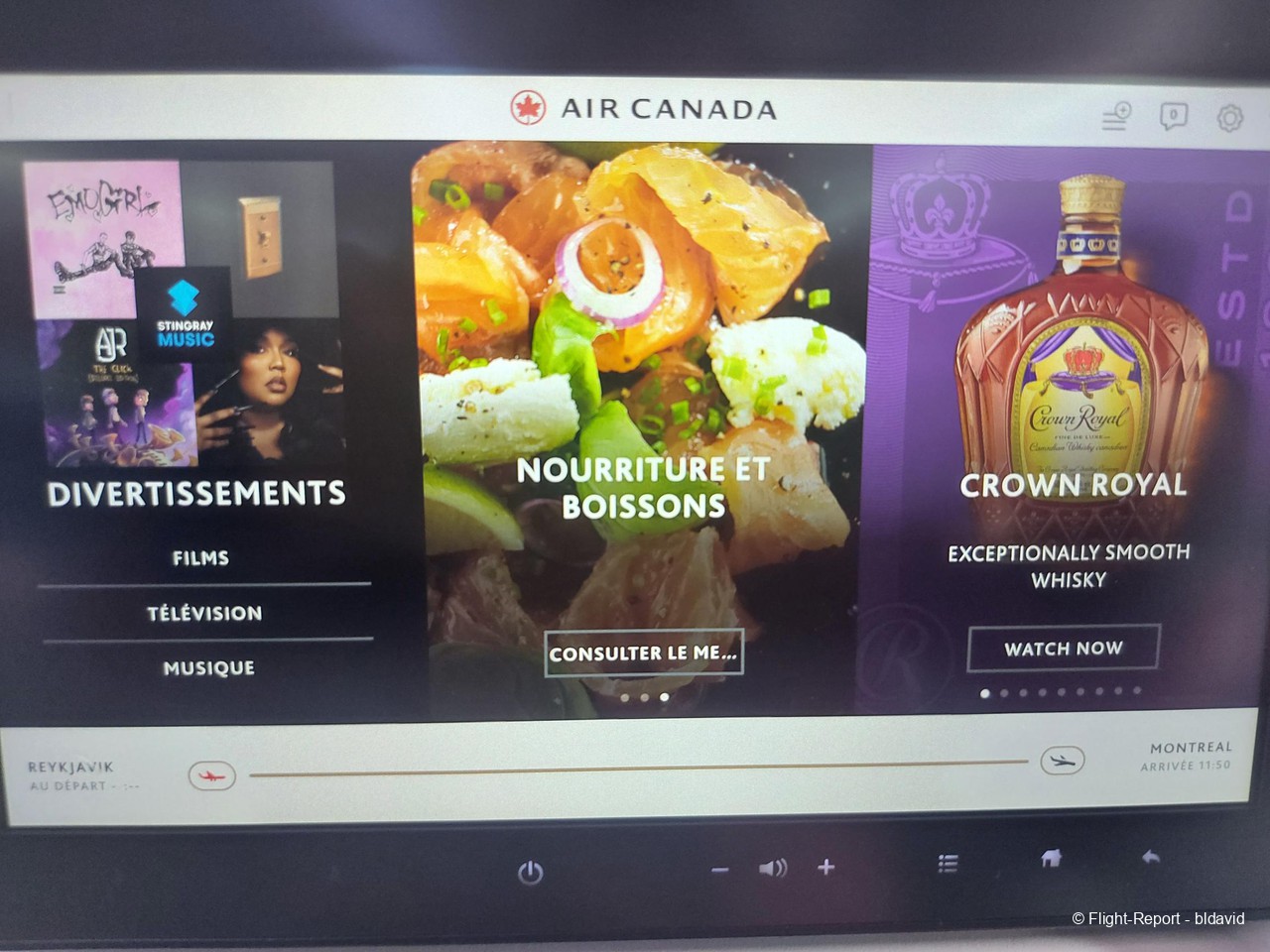 There are 346 movies to choose from. That’s very impressive. 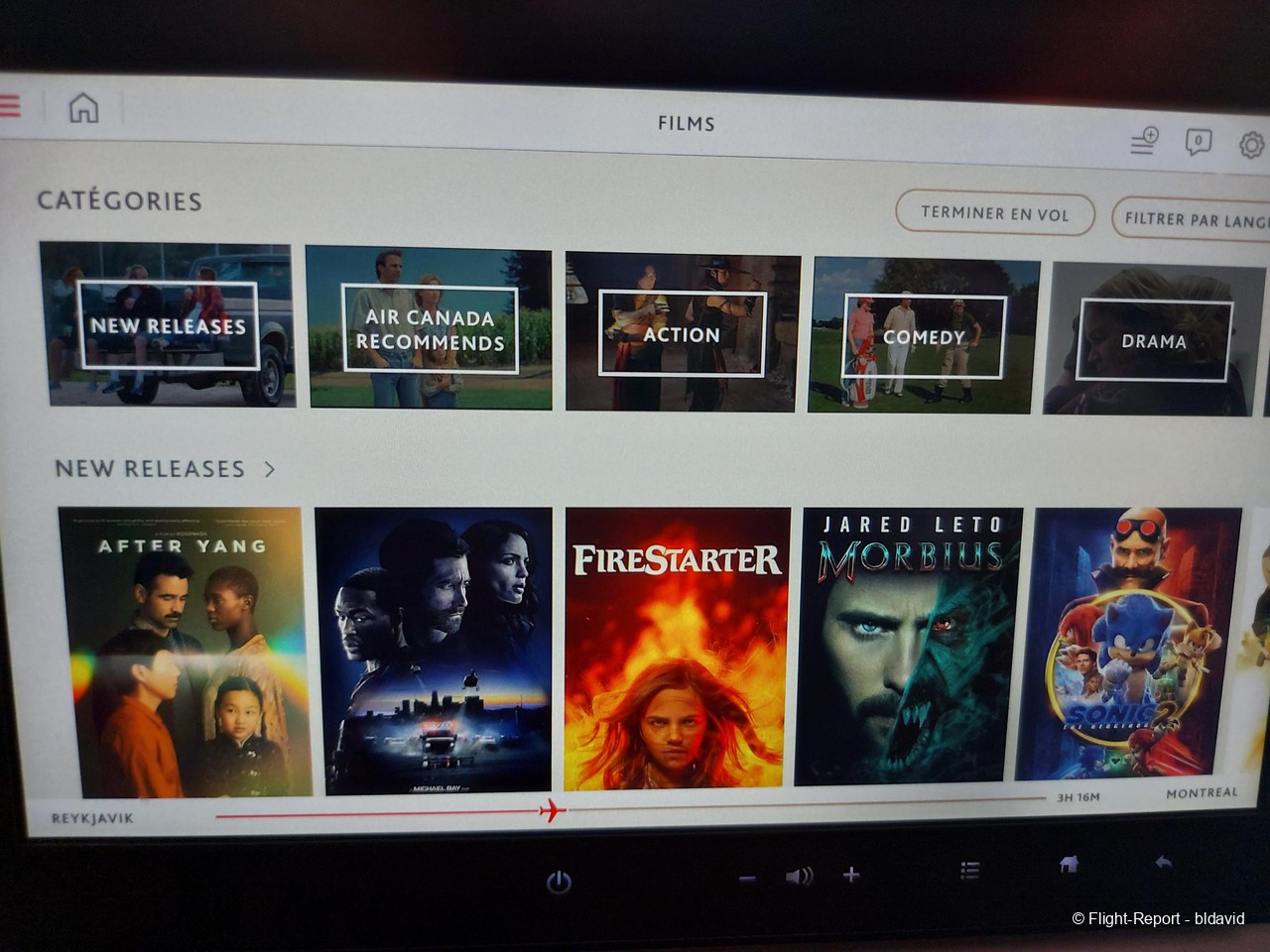 There are also many TV shows and several music playlists.

We left Greenland by the time I finished my first movie. The map is good and has several viewing options. 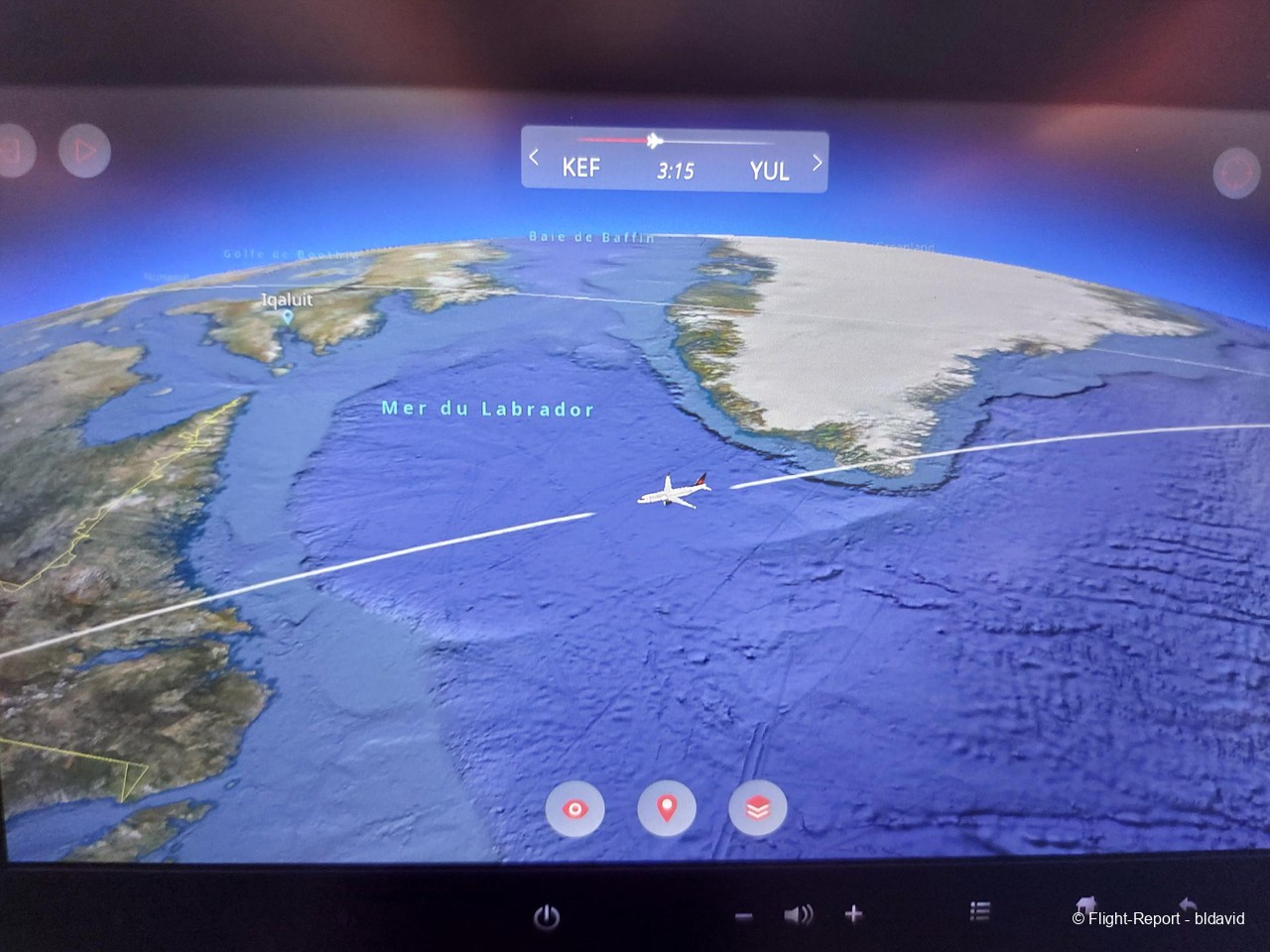 A warm chicken or vegetarian wrap was offered about 4 hours after take-off. It was quite good. Drinks were also offered. 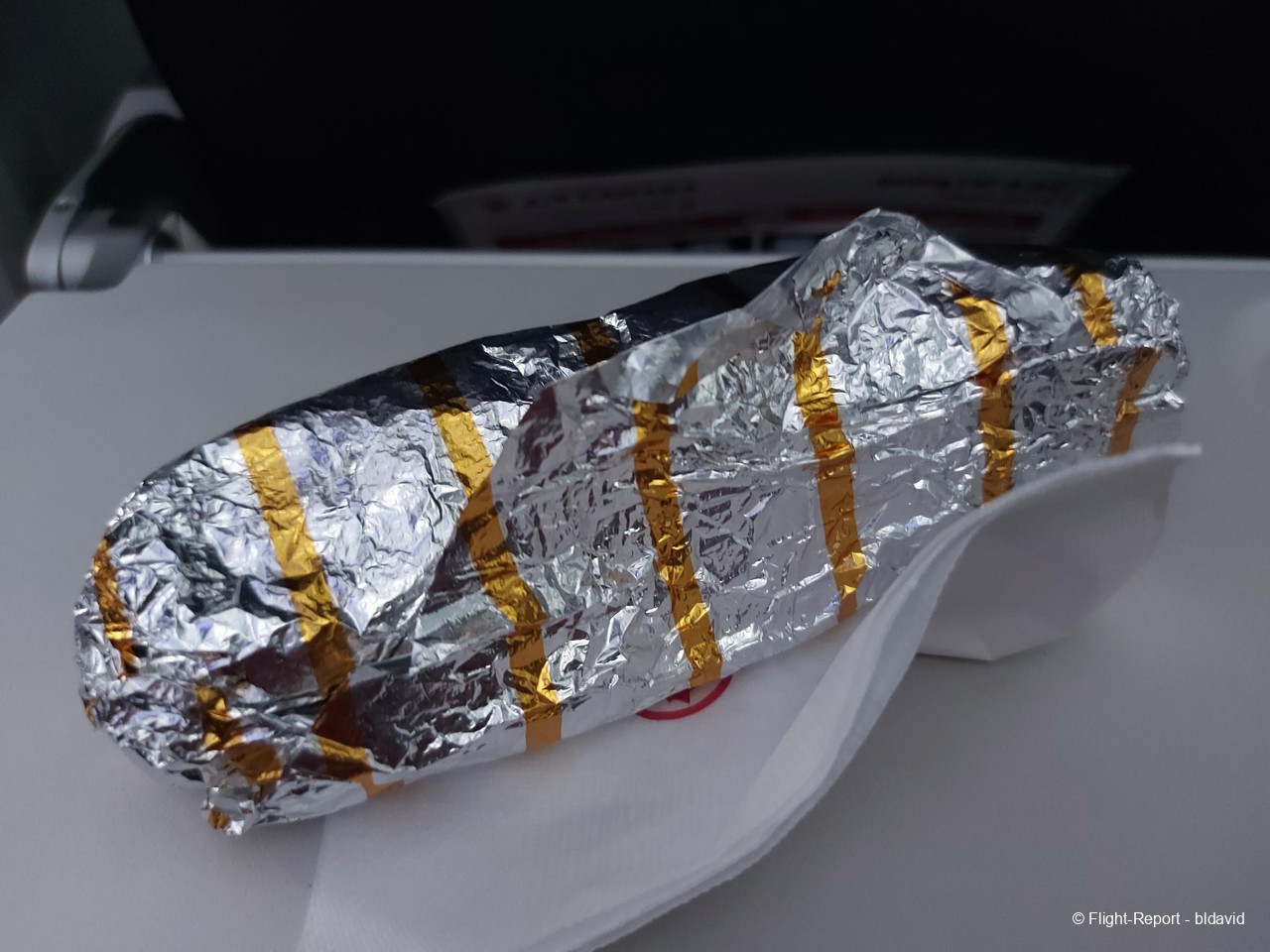 Our position 1 hour and 12 minutes before arrival. 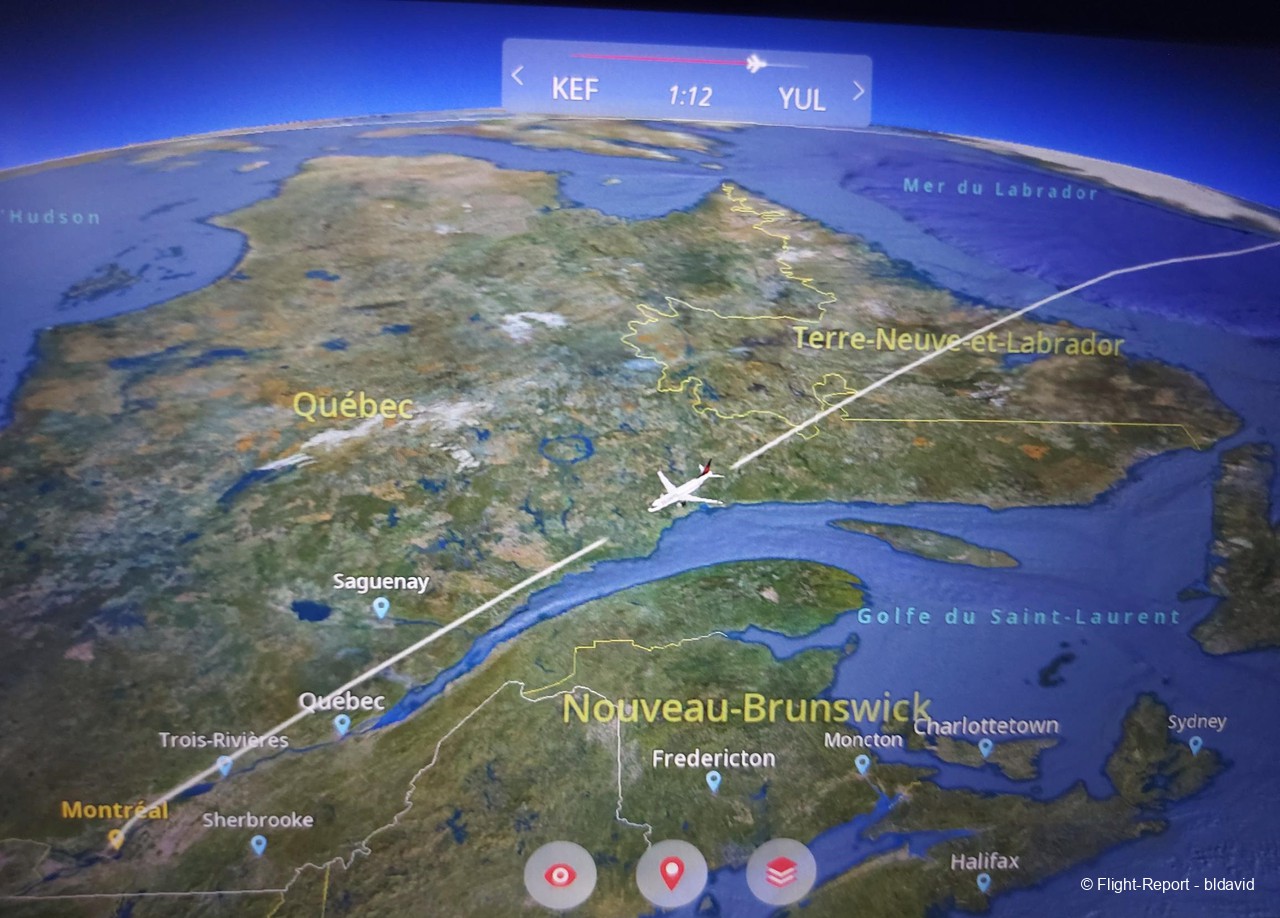 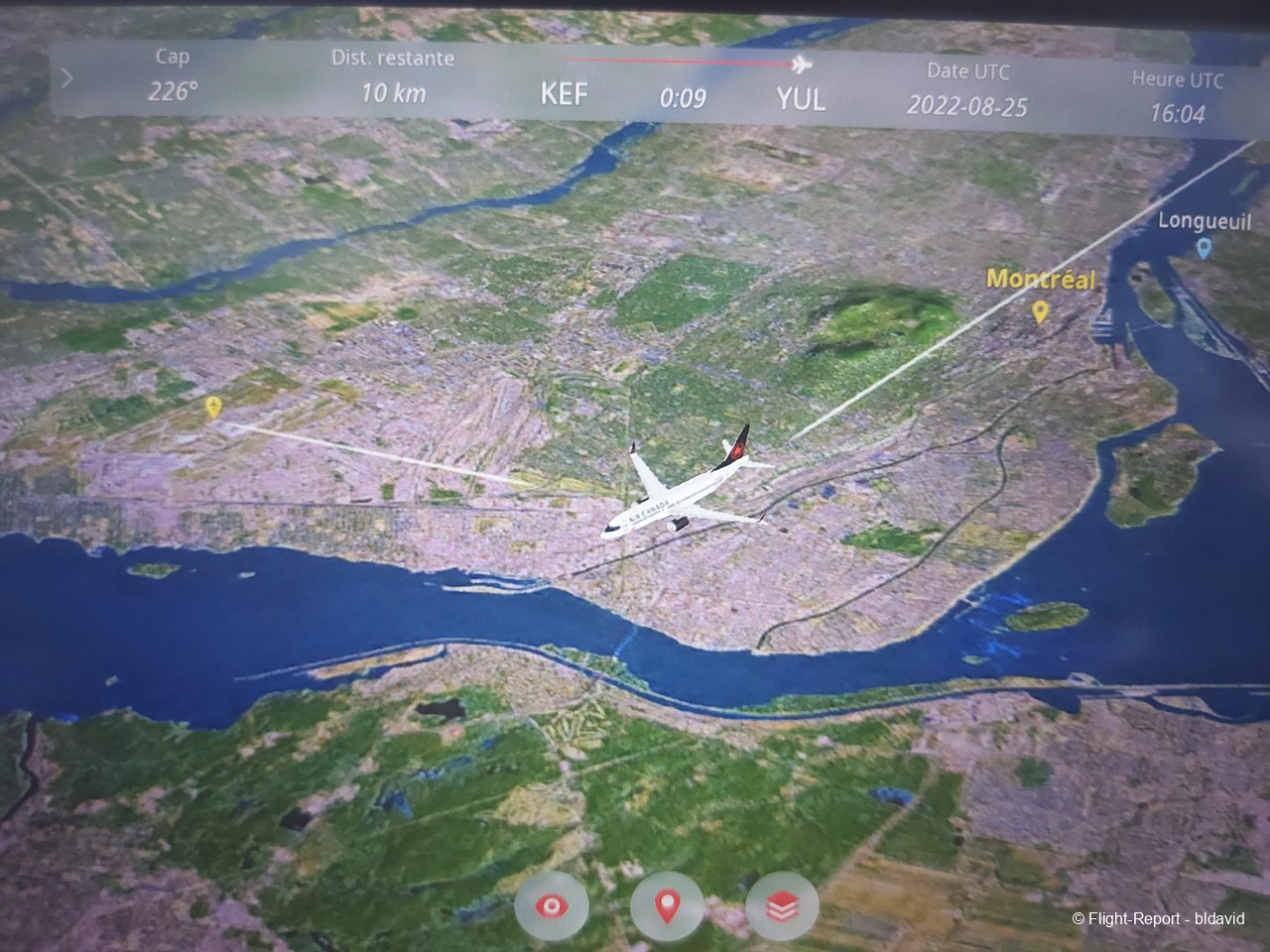