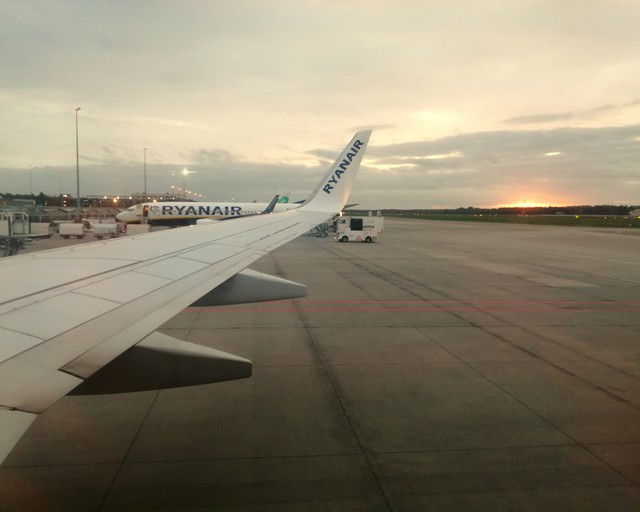 #11 out of 11 Low-cost airlines A minimum of 10 flight-reports within the past two years is required to appear in the rankings. 329 reviews

My first report will cover a route I commonly follow to visit my family. In the near future I plan to cover all carriers that fly from the Netherlands to Barcelona, and perhaps attempt to draw a comparison. 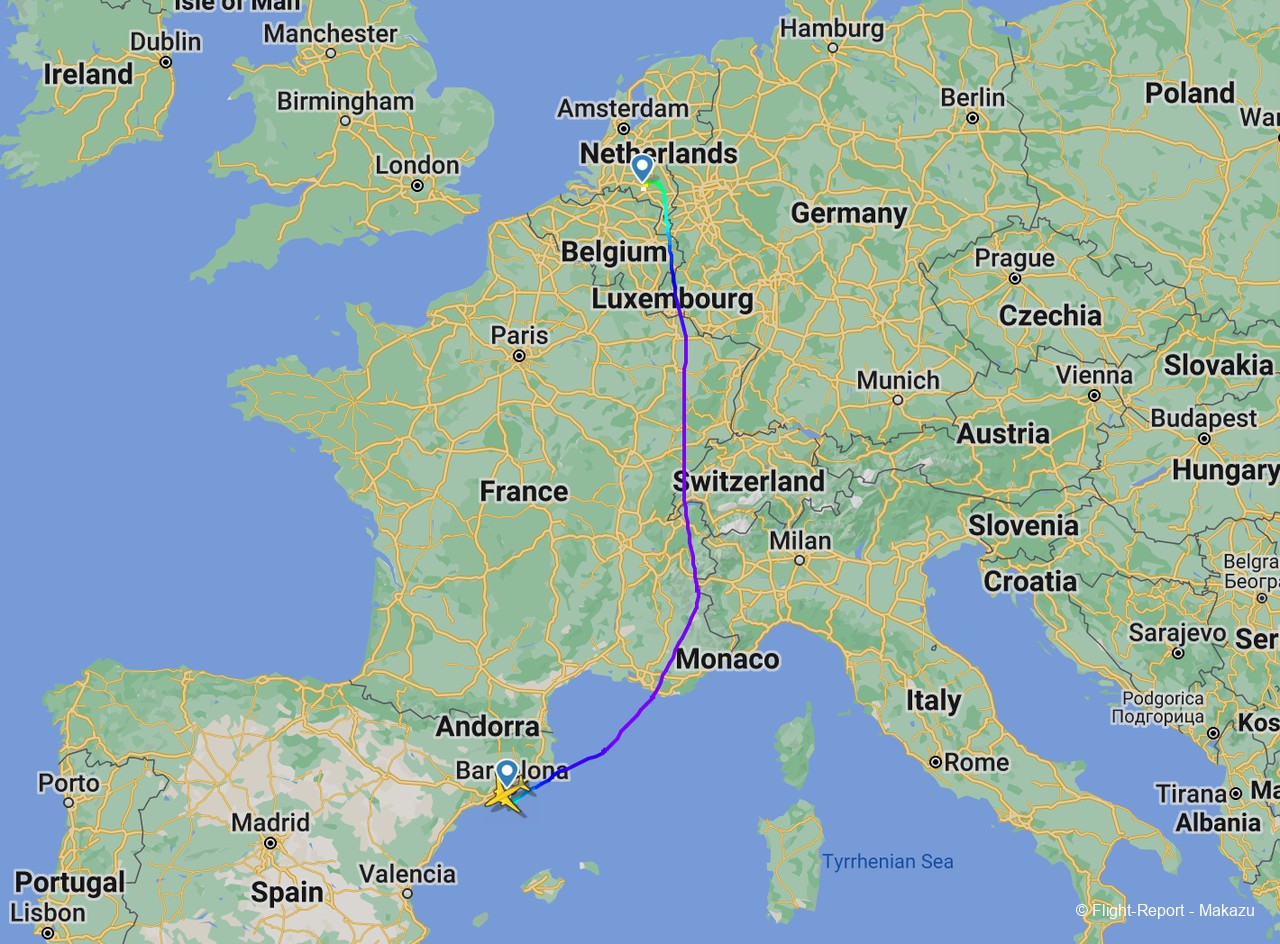 The trip begins at Josep Tarradellas Barcelona - El Prat airport, terminal T2 as usual for low cost carriers. I arrive by car, however the airport is very accessible by public transport.

Bonus : Click here displayhide
As a piece of advice, the metro and "Aerobús" do not accept the metropolitan transport card and are more expensive than most transit passes.

I recommend reaching the airport by the "Rodalies" R2N line that connects BCN T2 and Barcelona Sants, the main rail hub of the city. It is easily reachable from anywhere in Barcelona province, and Rodalies services do accept the metropolitan transport card. Even more, from Barcelona it is only considered 1 zone, so if you have a pass that covers 1 zone trips, you can just hop in normally. Furthermore, it is usually not as crowded as the other options. To reach T1 from the train station, you can go to T2 through the tunnel, go downstairs and take the free shuttle bus, which takes around 20 minutes.

If you prefer taxis due to personal abilities, baggage or any other reason, make sure it's one of the yellow and black official ones. They also charge a special airport fee, though.

Despite the large crowd, security is cleared in minutes, also being stopped for a random check. After a mandatory duty free, I arrive at the departures area. It is a bit crowded, which is understandable at a peak hour right after autumn break. There are also large monitors showing connections, including those from terminal T1. 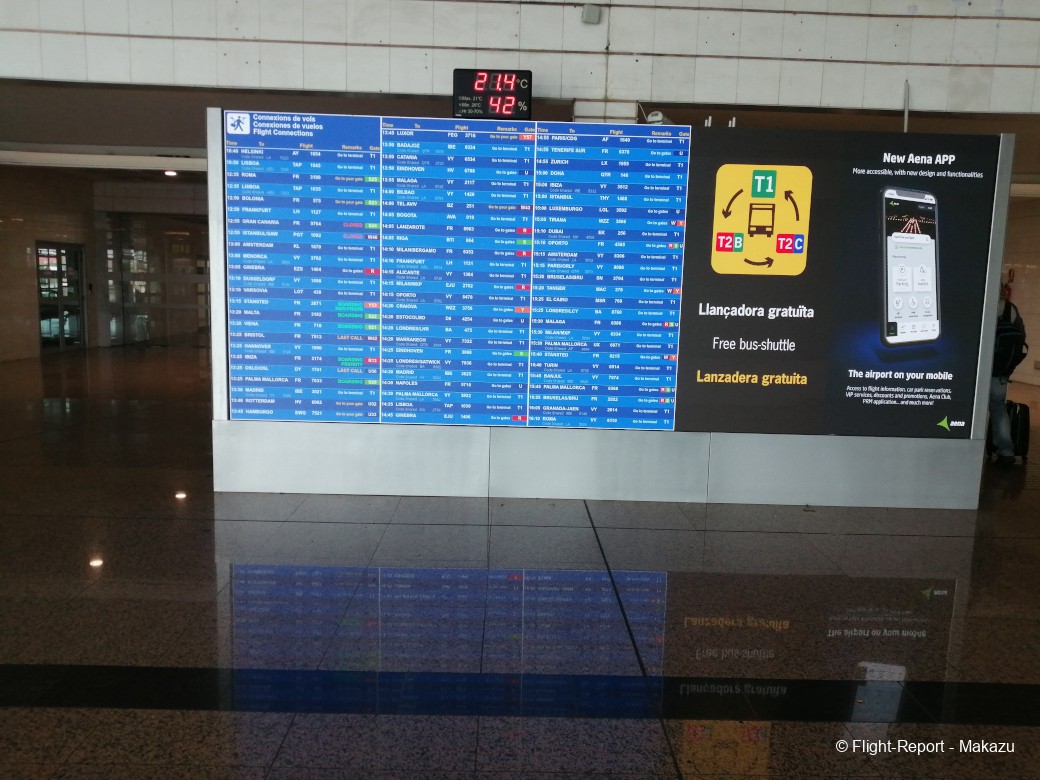 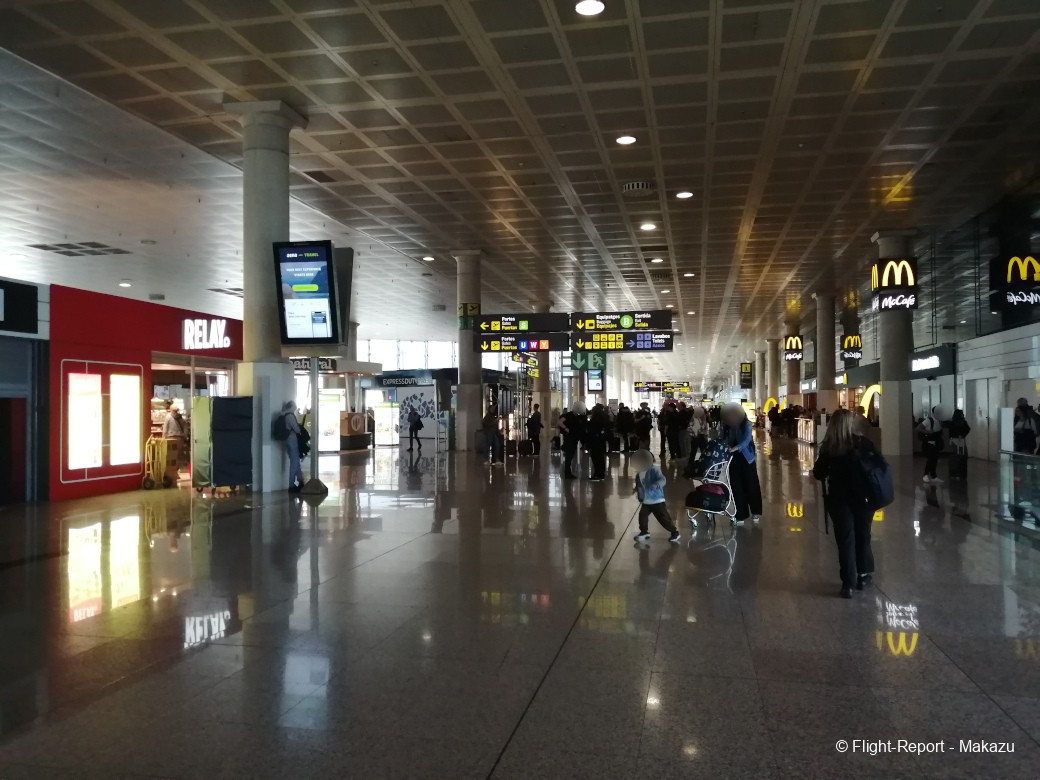 Due to its location, T2 only has a good view of runway 25R which is nearly always used for arrivals. 25L is used for departures and 02 for late night arrivals due to noise regulations. The better spots for landings are towards gates R and M. The whole terminal has glass windows which allows good visibility for spotters, though the variety is not the best, due to LCCs taking over the terminal with their 737s and A320s. 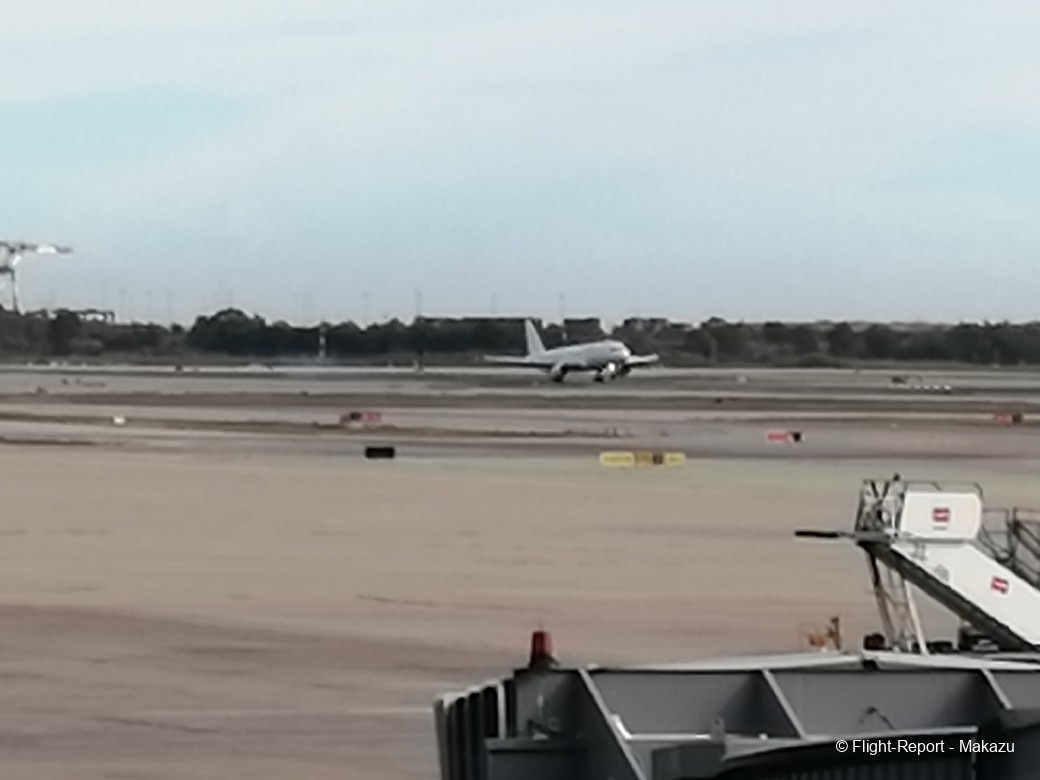 Back to our gate, our ride today is EI-EKH, a 737-800 delivered in 2010. It is the same aircraft that brought me here a couple of days ago. In the background, you may see a Transavia 737 that is flying the same route to EIN. 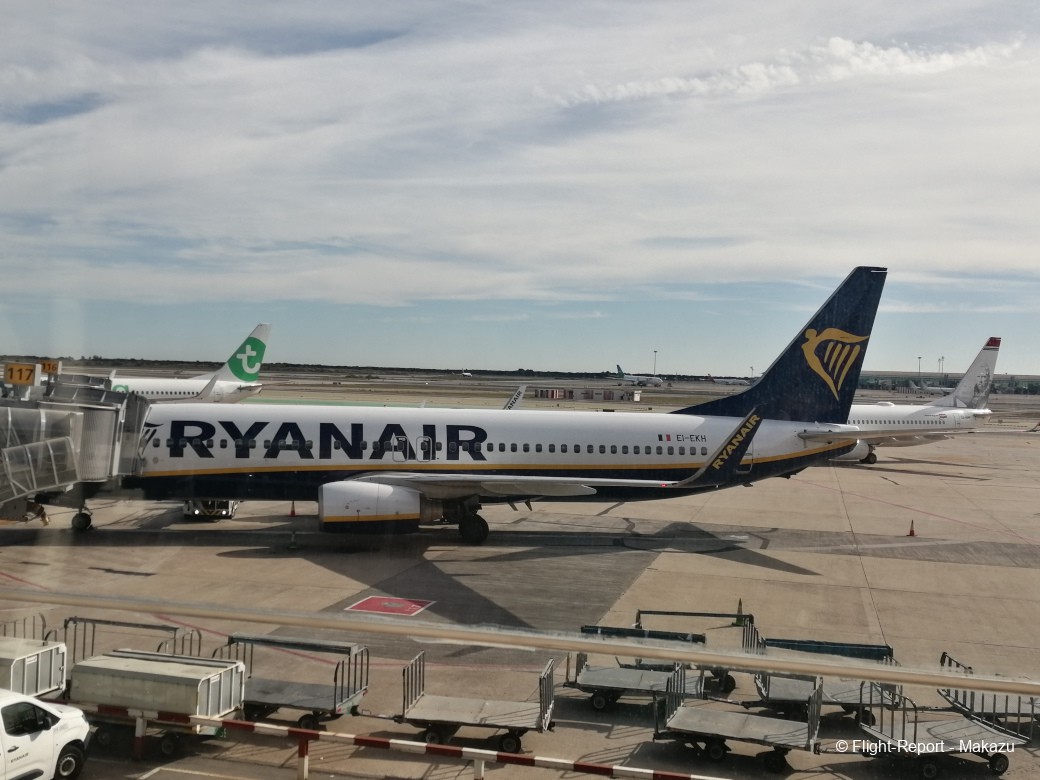 I take my seat at 23F, which has a good view of the wing and its control surfaces. The photo of the seat is taken after arrival, since my neighbours had already taken their places. I personally prefer this type of seat as they're more comfortable than their "modern-looking" ones. However, it is still as ugly as Ryanair gets.

The seat is no luxury, but at least is comfortable enough for intra-European flights, and the legroom is actually better than what some legacy carriers offer in short haul routes, though this has never inconvenienced me. As reference for the pictures, I stand at around 170 cm (5'6''). 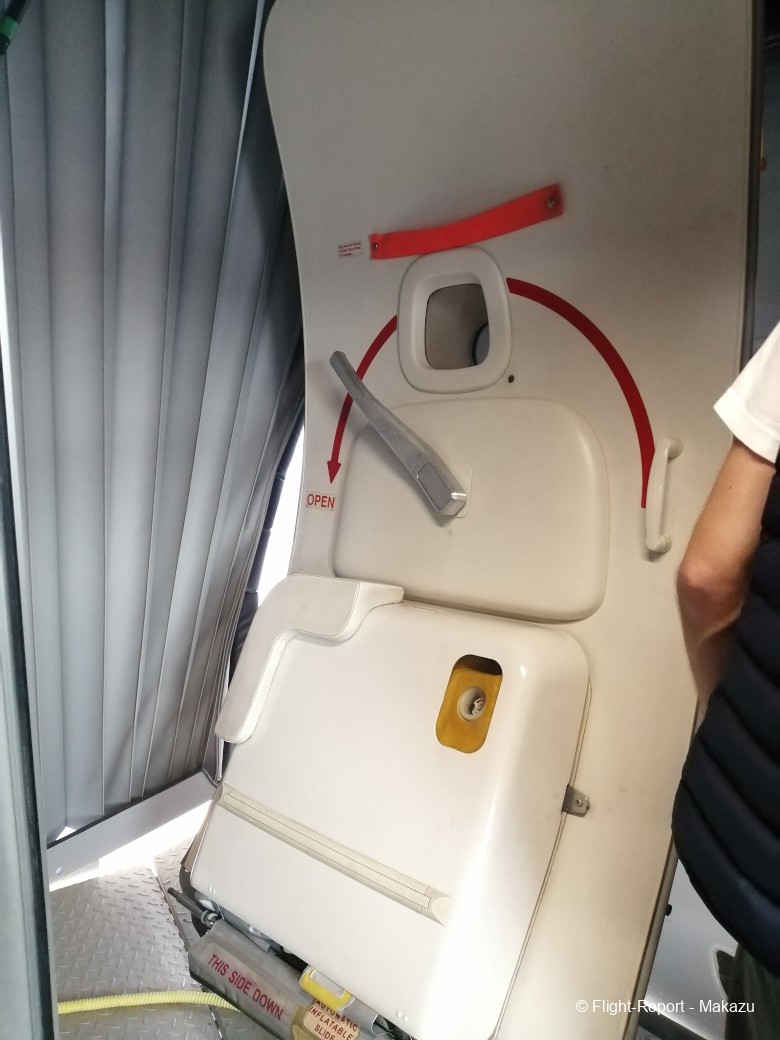 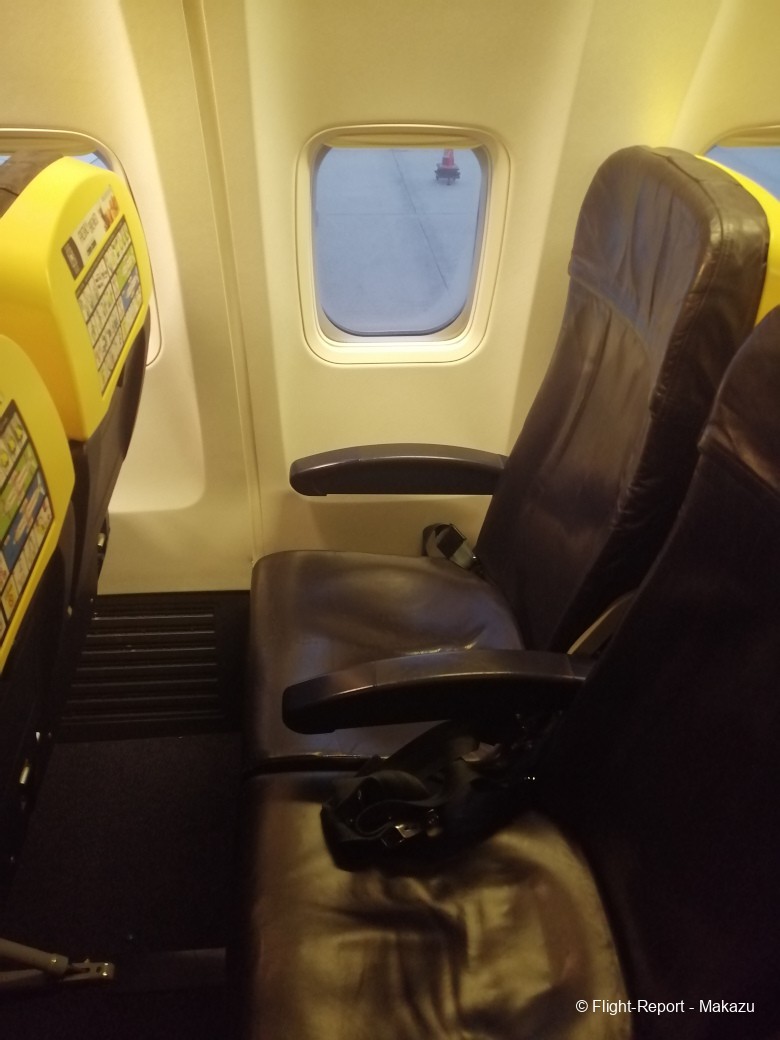 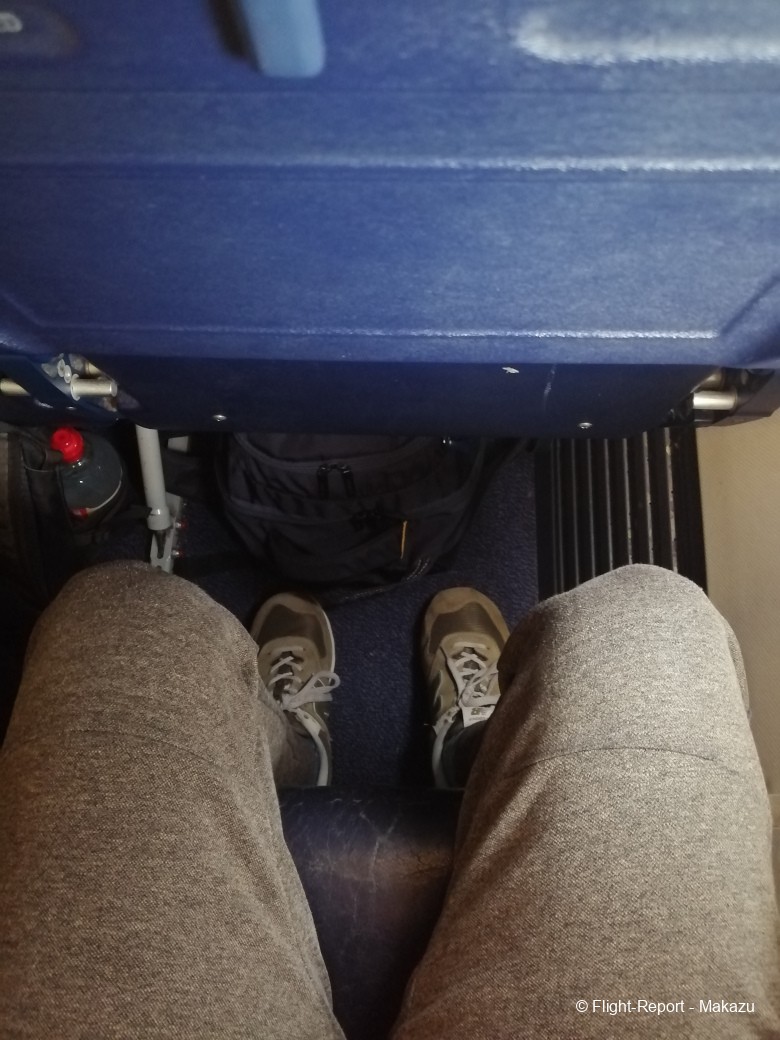 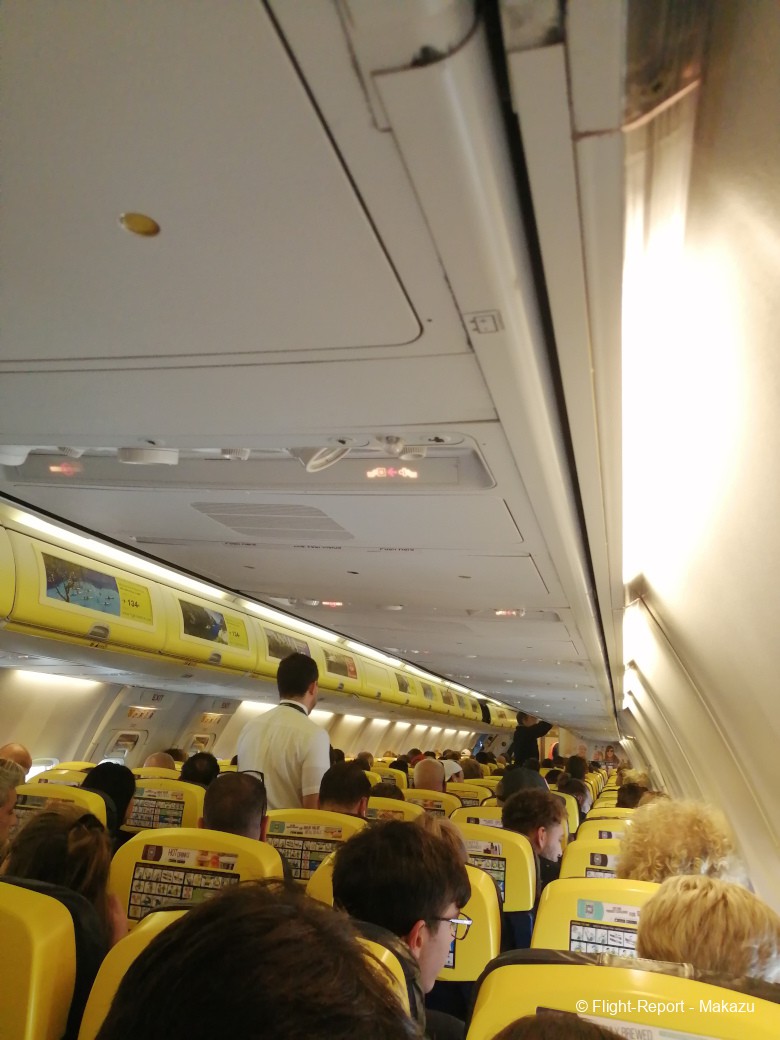 After a small wait, we push back and start the infamous BCN T2 taxi at 14:35. 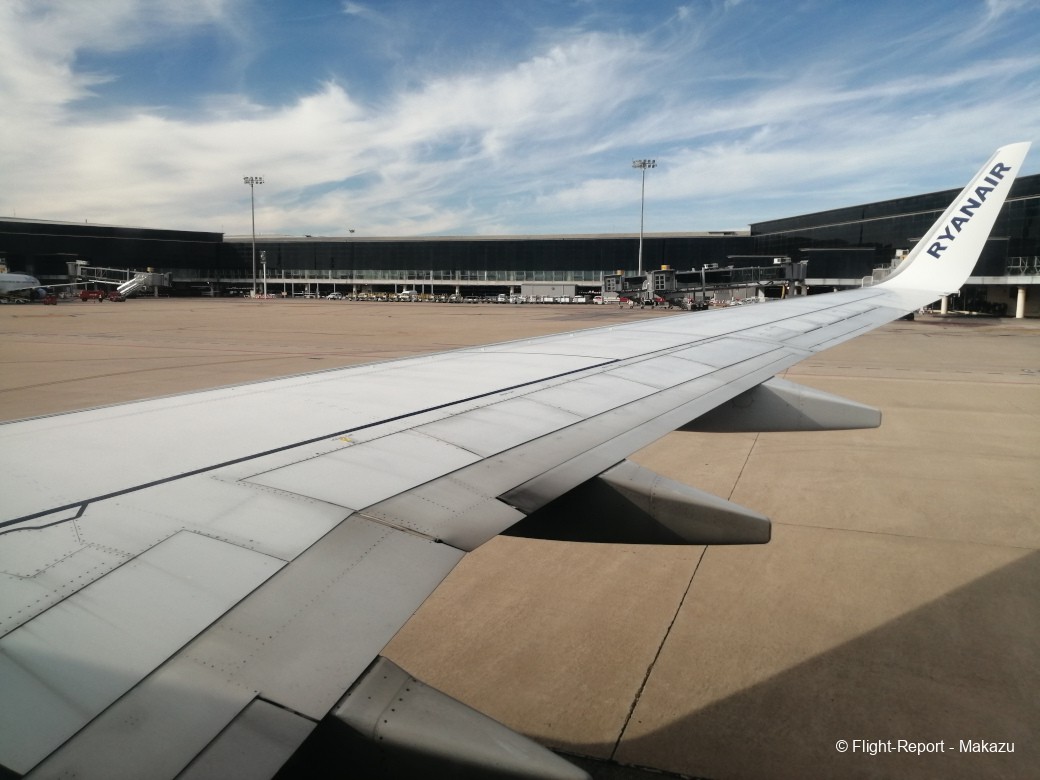 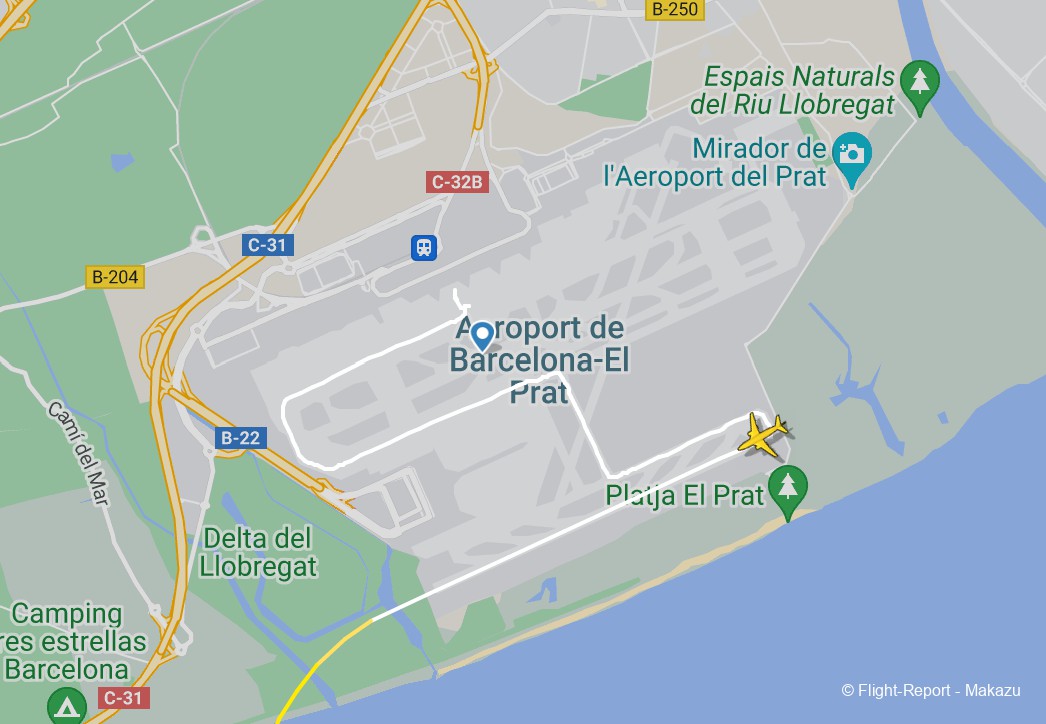 The rarest sight of the day, an MD-87 of defunct charter Pronair. 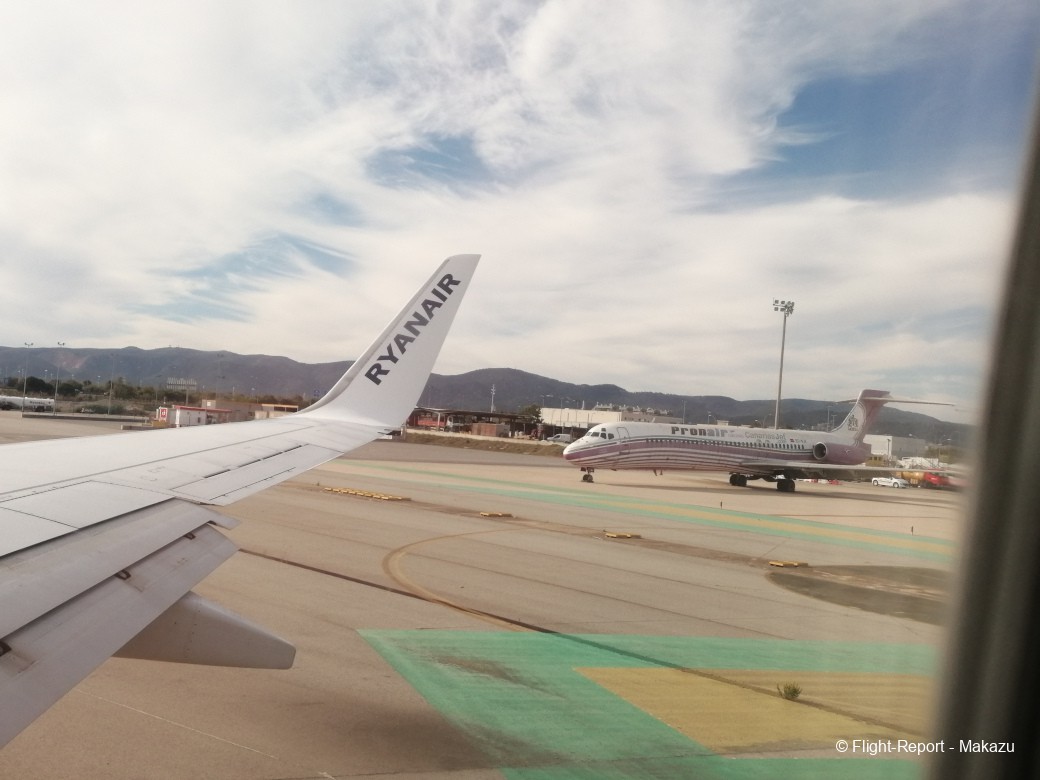 We finally reach the runway after close to 30 minutes of taxi. I wonder if Ryanair domestic flights from BCN spend more time taxiing than flying… We take off and turn towards the Mediterranean.

I seldom eat at airport restaurants, even less in planes without complimentary meals; however I decided to test Ryanair's inflight service for the sake of the report. I order their "Rich & Saucy" beef lasagna, which costs 6,50€. Not the worst for this airline, however they only accept Mastercard, Visa and American Express, and the terminals sometimes just decide not to work. Eventually, I get my meal, within an acceptable 12 minutes.

Surprisingly, there is some flavour in there. It's far from a homemade or restaurant lasagna, but up to most airline standards. Around the same quality as Auchan supermarket frozen lasagnas, for a reference.

The highlight of Spain-Central Europe flights for me is how breathtaking the Alps look every time. 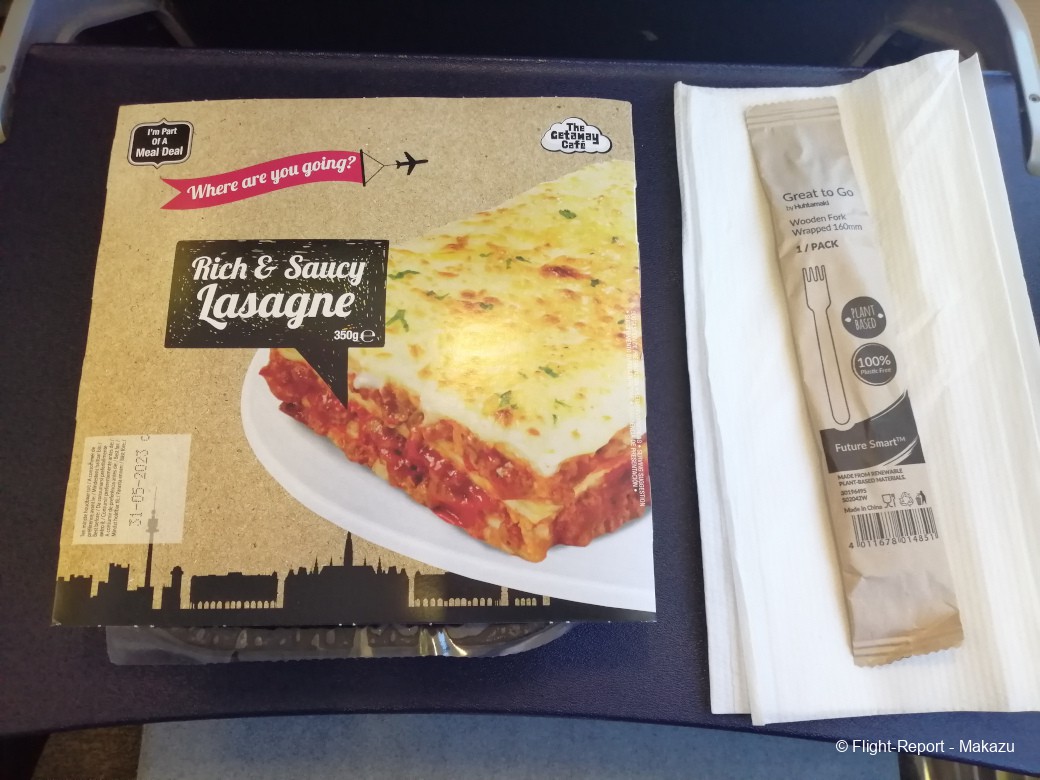 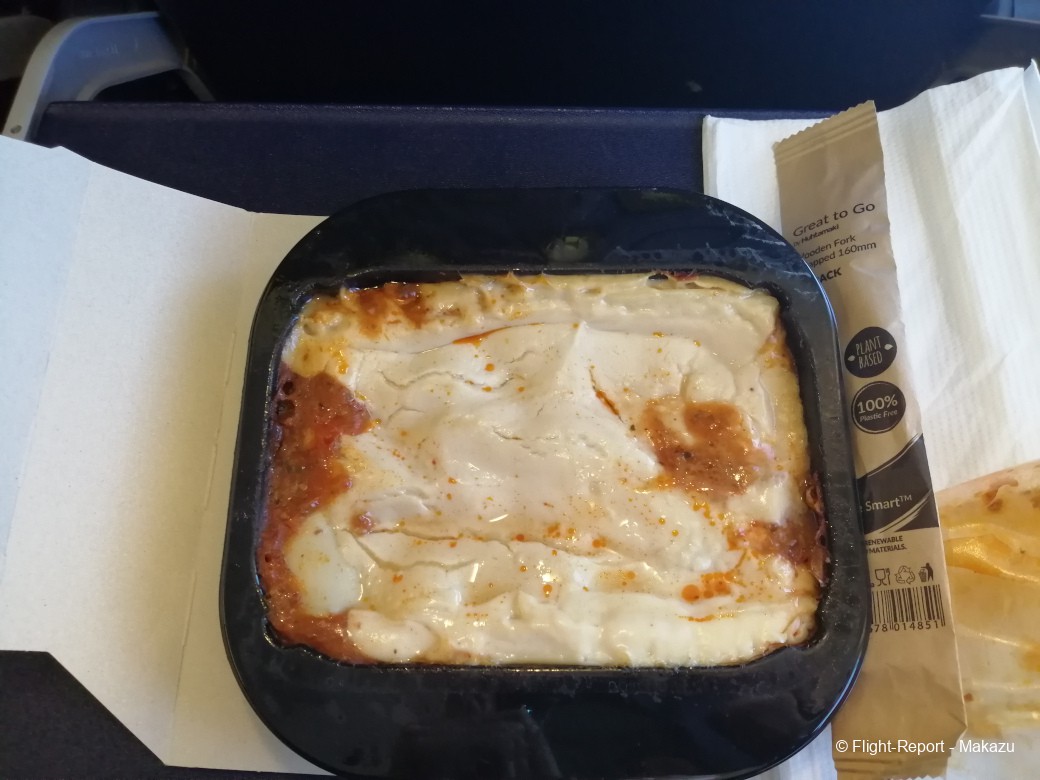 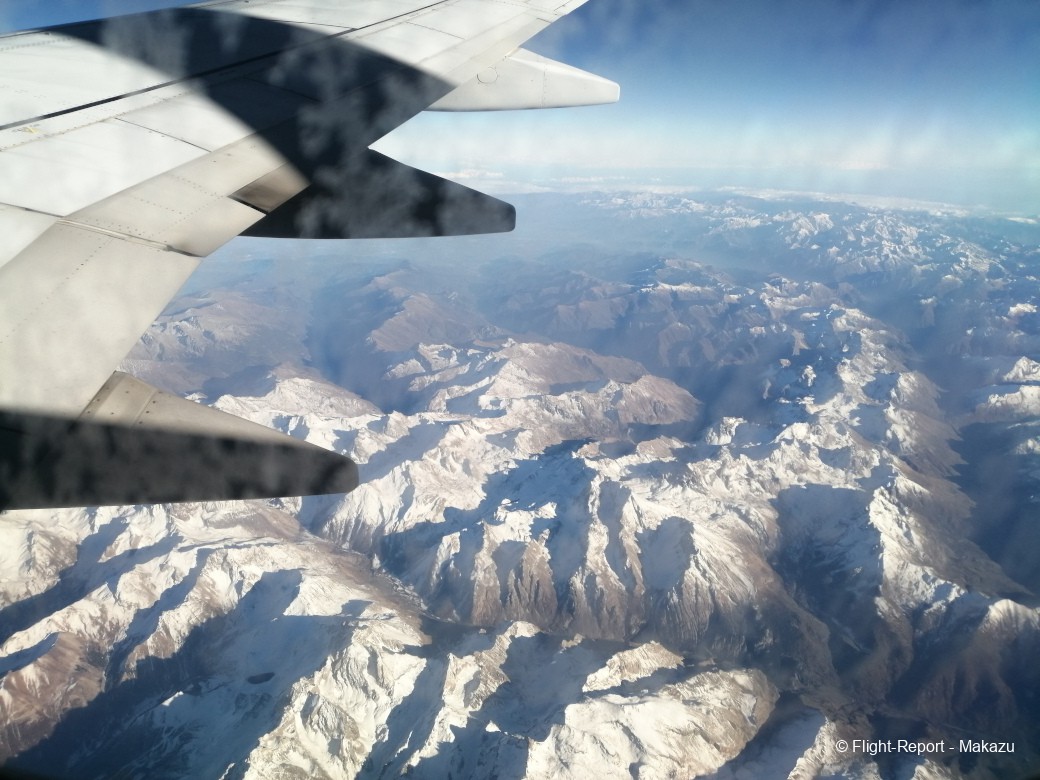 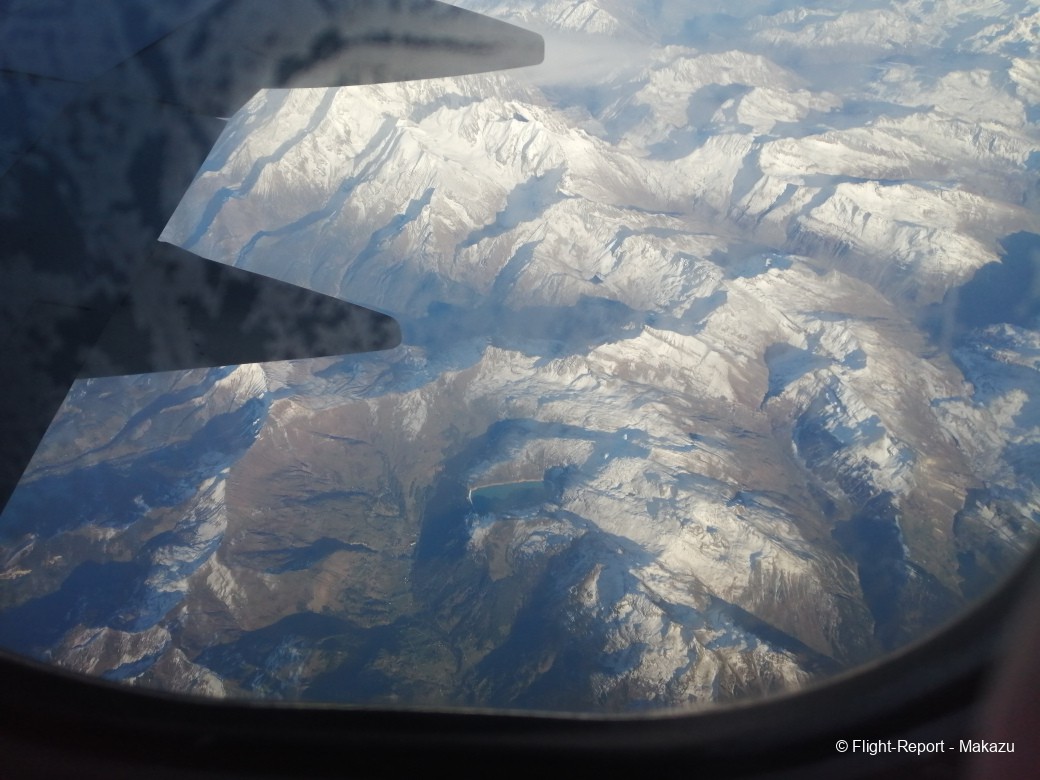 As we begin our descent, the strong Dutch winds can be felt around the aircraft. Breaking through the clouds, we can see a bit of Germany and the Netherlands… 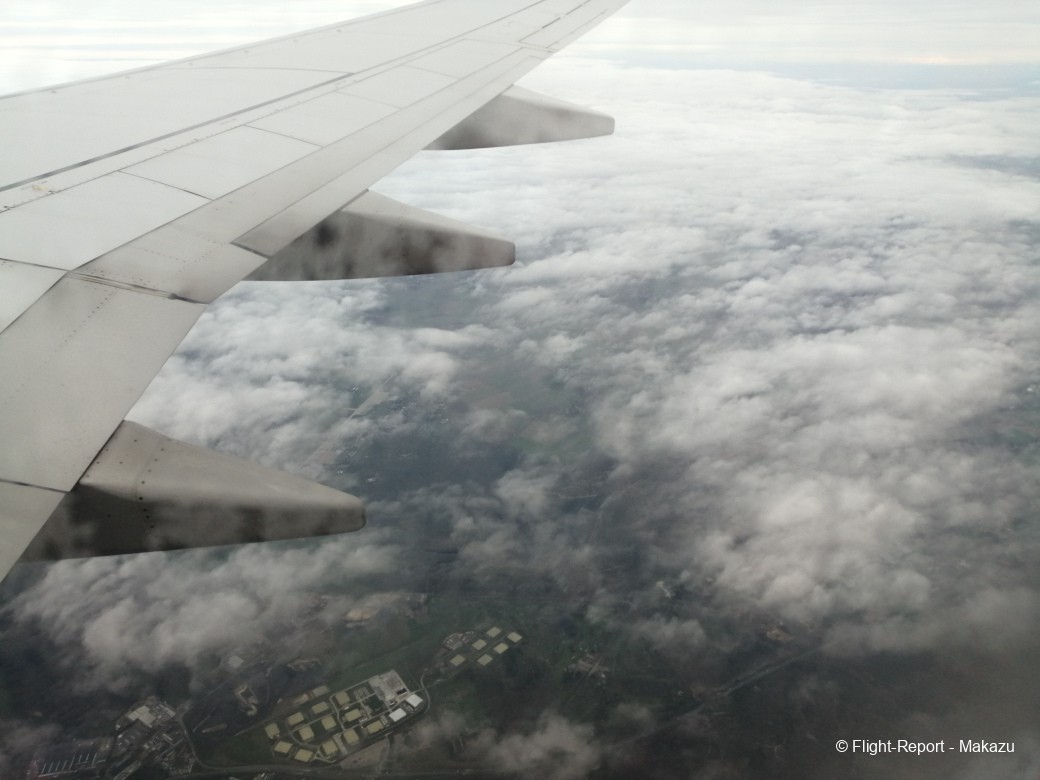 The landing is pretty good, as expected of an airline whose pilots perform the maneuver countless times a day.

We taxi to our gate, making a loop through the runway as is usual in EIN… 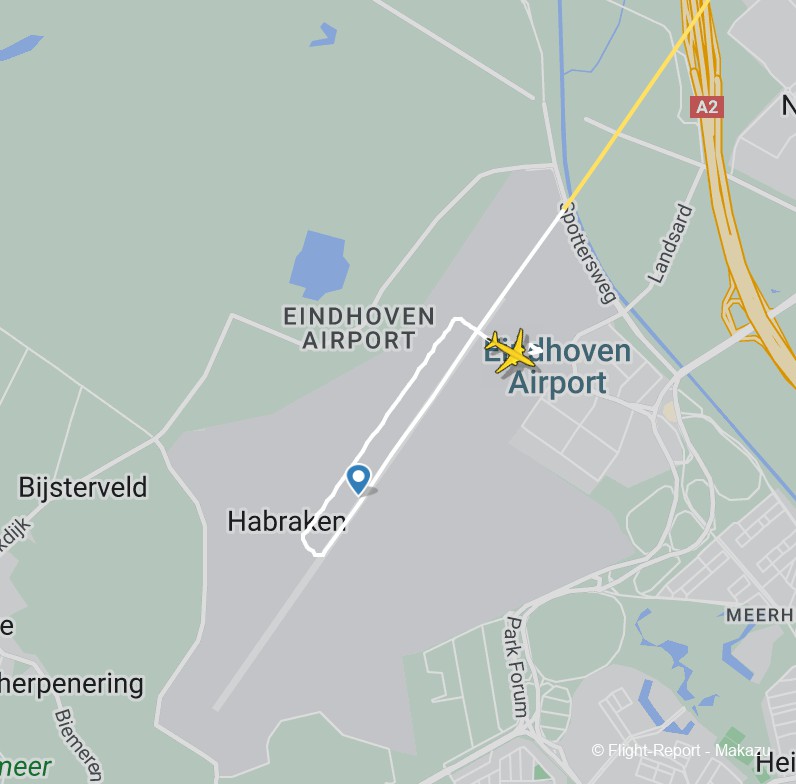 I leave through the back door and take the chance to snap some pictures from the tarmac. 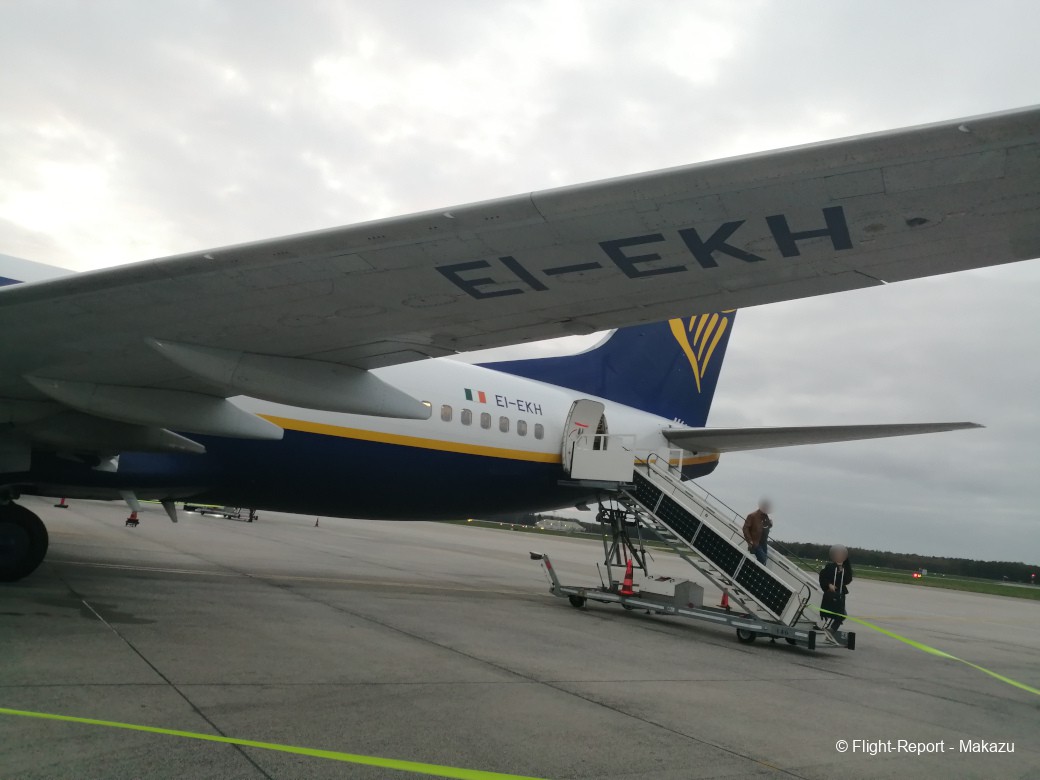 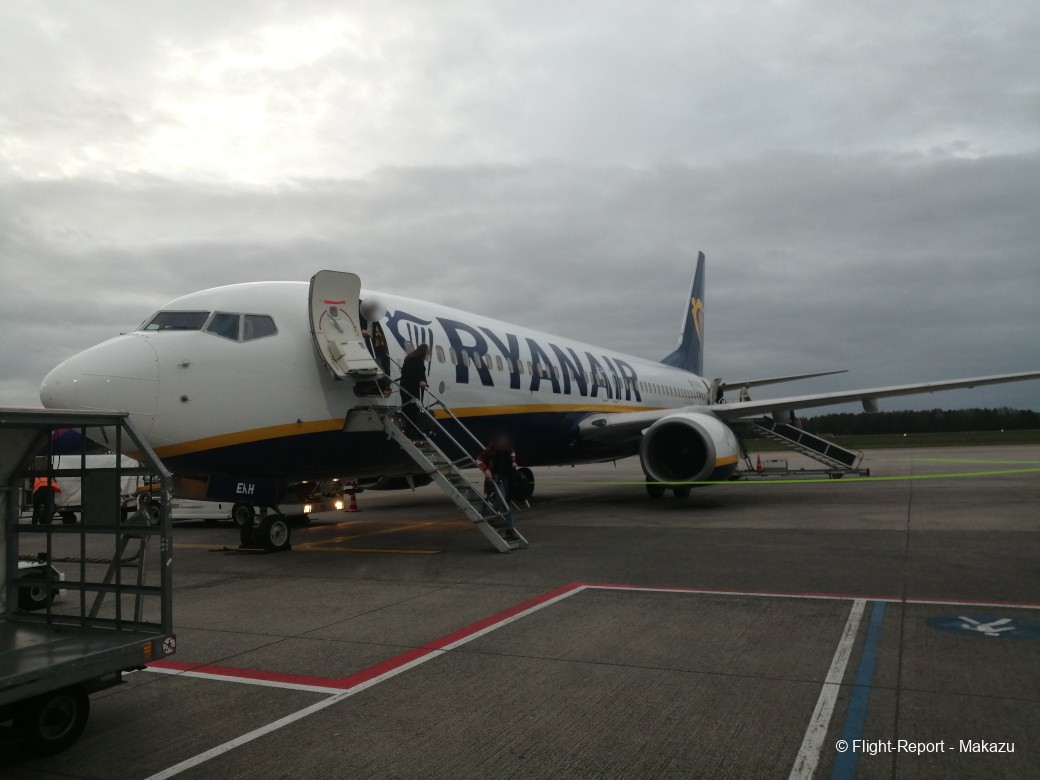 Being on the smaller side and with so many passengers, EIN tends to get crowded. However, I only have my backpack so I leave with no issues. 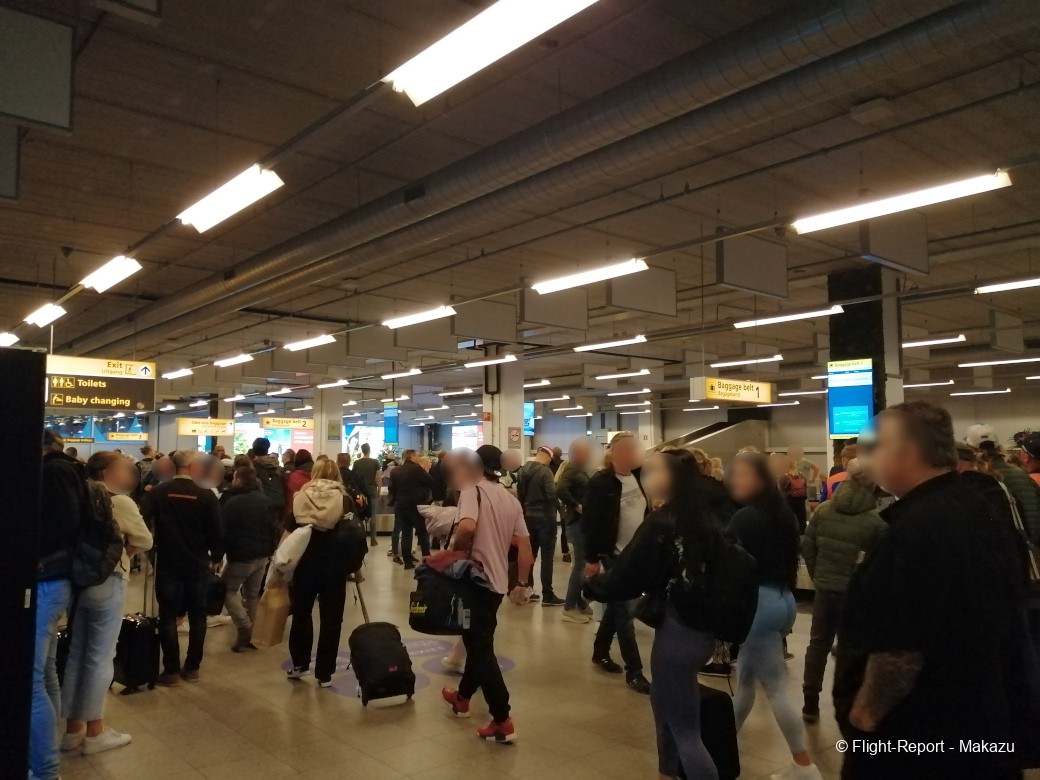 EIN is pretty accessible by car, public transport and bicycles, being in the Netherlands. I usually take the shuttle bus to the central station, which takes around 40 minutes. Eindhoven Centraal has frequent services to Utrecht, from where you can reach Holland easily and anywhere else in the country within a couple hours. 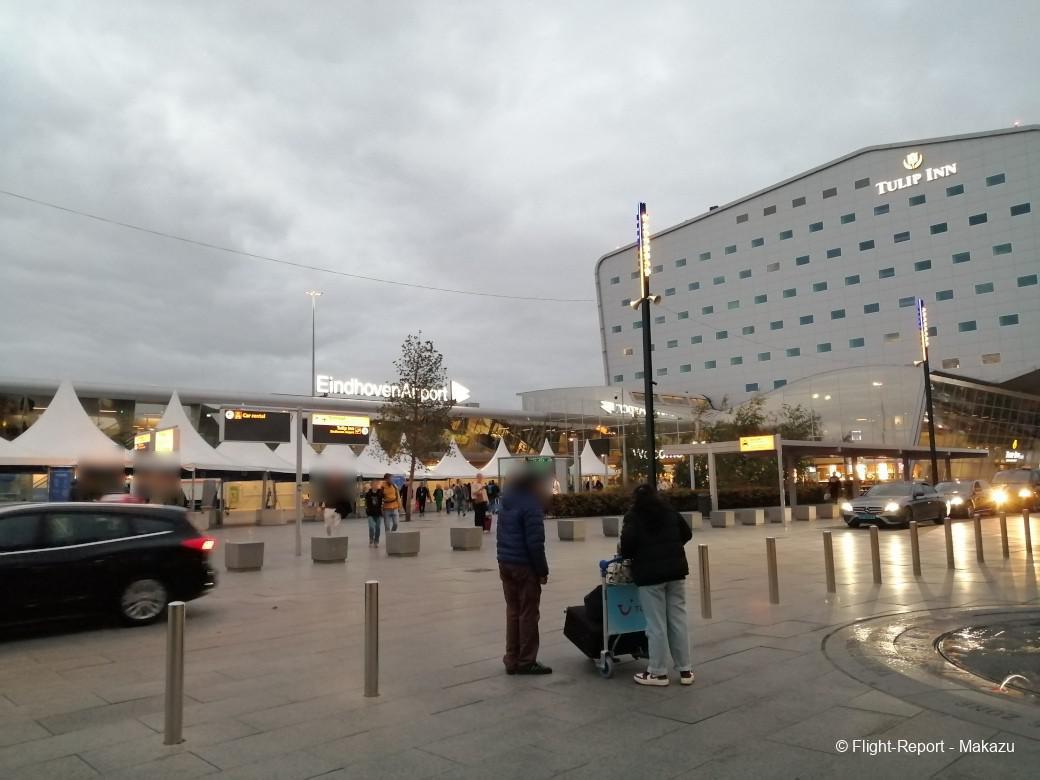 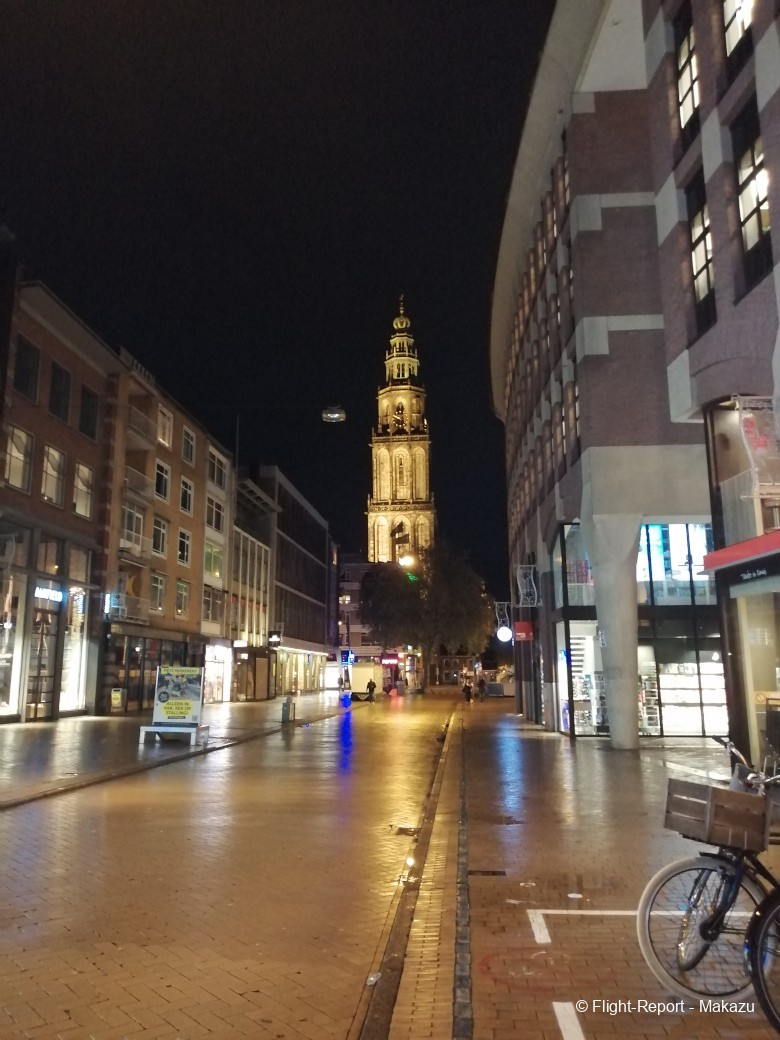 BCN T2 offers most services needed by leisure travelers, and features a lounge which I do not plan in accessing anytime soon. However, the departure taxi is always very long.

Ryanair offers an ordinary European low cost experience. Always check what is and is not included in your ticket, which may surprise you. There were no inconveniences and the meal was not bad.

EIN makes arriving passengers go straight into baggage collection with no chance to buy duty free or have a snack at a restaurant.

The only issue is that no one (including me) wore face masks even though they were "mandatory." As a result, I am writing this report with a fever, a box of tissues and a deep feeling of regret.