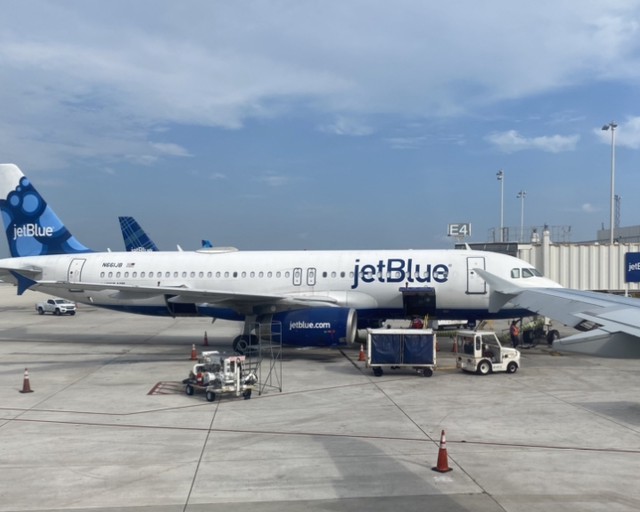 #2 out of 79 Airlines A minimum of 10 flight-reports within the past two years is required to appear in the rankings. 53 reviews

This flight wasn't exactly… expected to say the least. Originally booked on Delta 1696 from Fort Lauderdale to Atlanta (B757) and Atlanta to Charlottesville (B717) (would have liked to fly on a 717 but oh well) we had this planned for a while. Unfortunately, our aircraft had some issues on the flight down to FLL, and we would have missed our adequate 1h 45m connection in ATL. We scrambled for any other option, and we came across a JetBlue flight nonstop to Richmond, only 1 hour away by car to Charlottesville (yes, Delta refunded everything). Now, back to the flight. 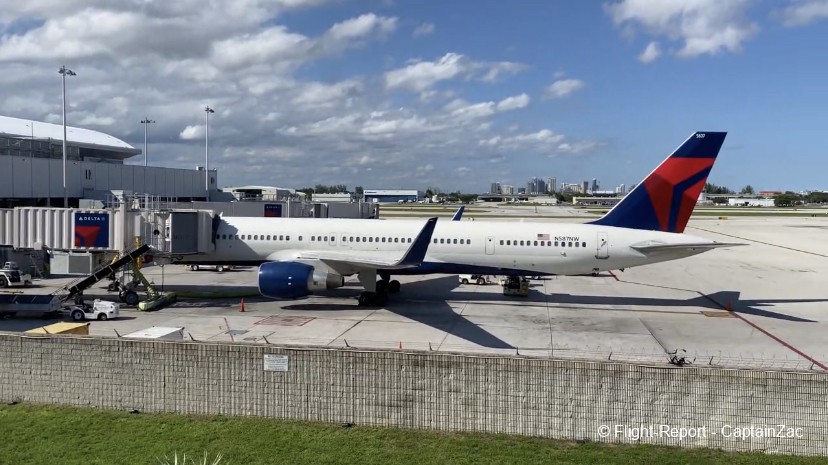 After making my way over to the JetBlue counter and buying tickets (first time I've ever had to do that at an airport), I secured an Even ore Space seat at the front of the plane. Purely for the purpose of the inner AvGeek inside of me (and admittingly not wanting to be in a middle seat), I was moved to seat 8F, a normal window seat, which I was perfectly fine with. 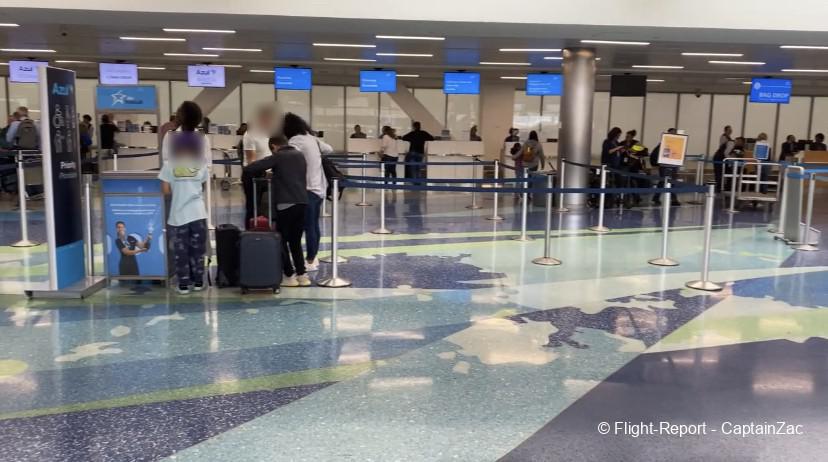 After checking in, I headed to TSA, and even though I had PreCheck, the normal line was totally empty as well. After clearing, we quickly went to my favorite restaurant in the airport, the Jack Nickolas Bar and Grill located by gate E6 in Terminal 3, which just so happens to be the gate we are departing from this evening. 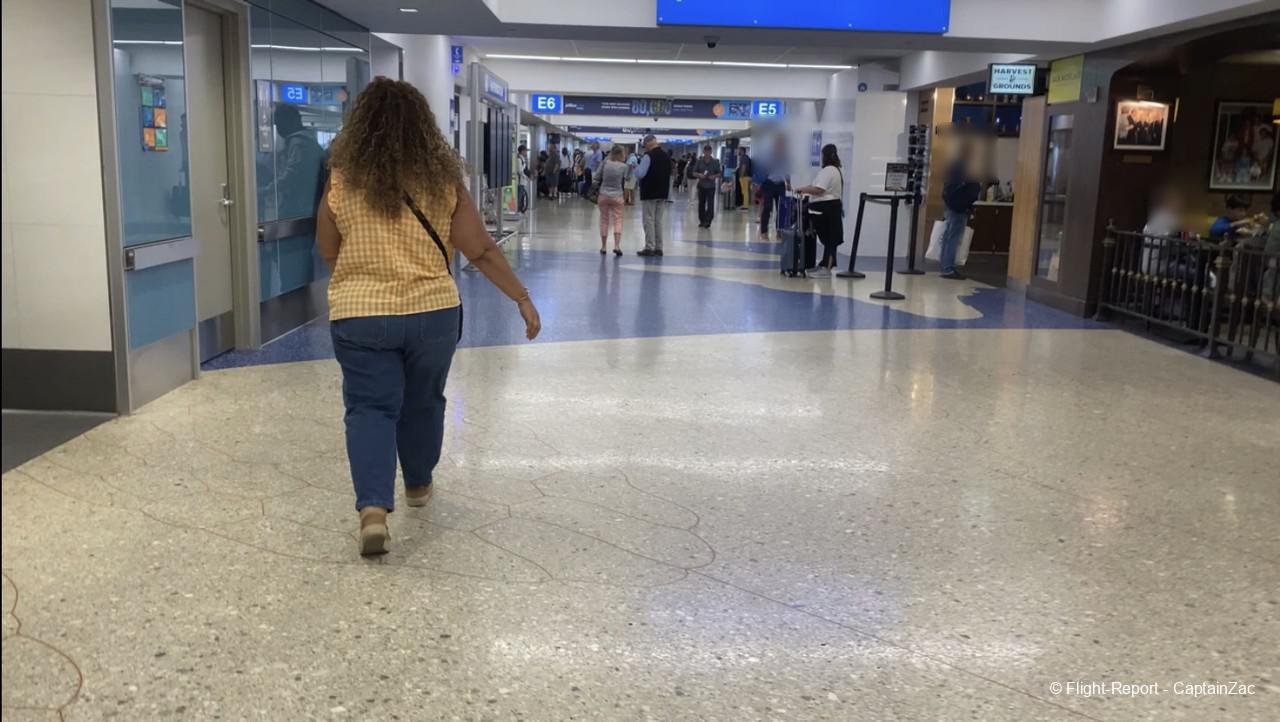 I had a burger, and it was really good, but no time for much more as we were literally paying as boarding was about to start. Talk about good timing.

Boarding wasn't chaotic, but it was busy considering this was a nearly full flight. Just makes me think about how lucky we were to even get on this plane last minute. 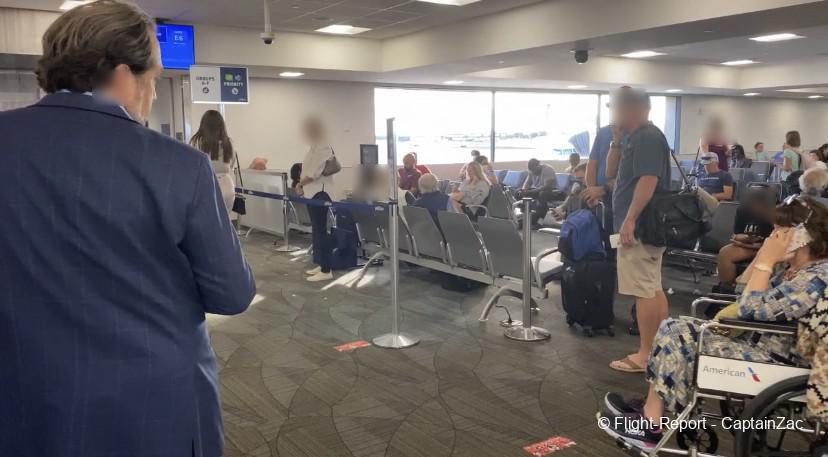 We soon began boarding. Since my seat was technically still Even More Space (but sitting in a normal economy seat), I was one of the first to board… that does not mean I was able to get a good shot of the cabin, though…. oh well. 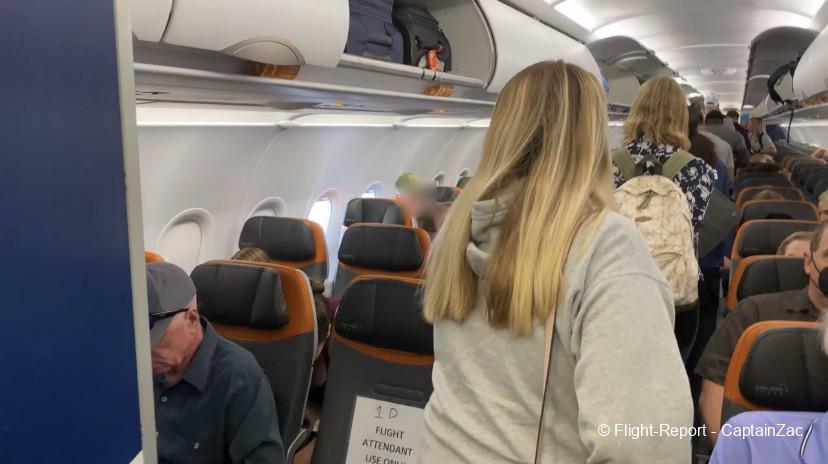 Today, our aircraft is N630JB, one of the last A320s still in the old Blueberries tail, which is one of my favorite tail designs. This plane was repainted to the newer "Spotlight" livery just 2 weeks after taking this flight. Despite the "older" tail it was updated with JetBlue's new A320 Phase 2 interior, which is incredible. The colors and the cabin look so inviting upon boarding always, and I love the attention to detail which I'll continue to point out through the trip report. 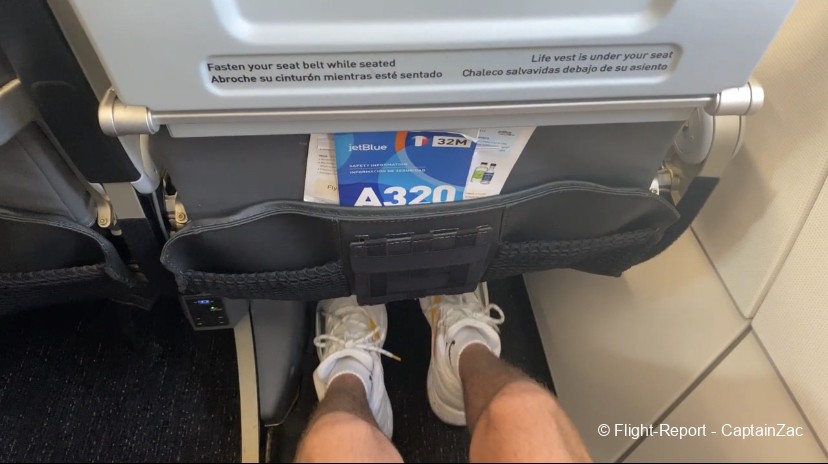 JetBlue has industry leading legroom on all their aircraft, ranging from 32 inches to even 34 inches on some aircraft. The blows airlines like Spirit with 28 inches as well as even American with sometimes as low as 30 inches out of the water. I find all JetBlue economy seats to be comparable to extra legroom seats on most airlines.

On their Phase 1 and 2 A320s, JetBlue has power ports at every seat - 2 for each row of 3. Each IFE screen also has a dedicated USB port for charging. Speaking about under-seat-stuff, the seatback pocket is huge, and I love all the different compartments for every item you may or may not need on a plane. 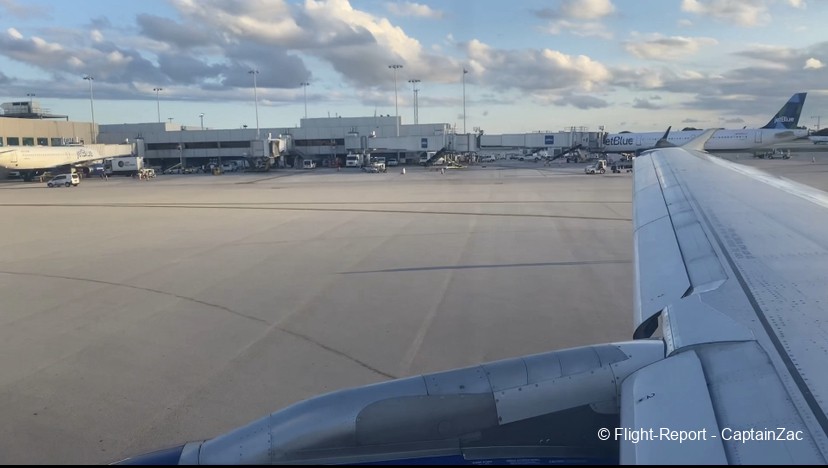 We soon began our pushback and taxi to runway 10L for departure from FLL. Even being late in the day, JetBlue had our flight leave exactly on time, and despite some operational issues they had a while back, they seemed to have recovered for now. Keep in mind that JetBlue has a large base in the Northeast. JFK, LaGuardia, and Boston are prone to delays during the winter, so while this is an issue that would affect every airline, JetBlue (as well as Delta, American, and United who have bases in NY airports) are sometimes affected more if one of these airports is shut. 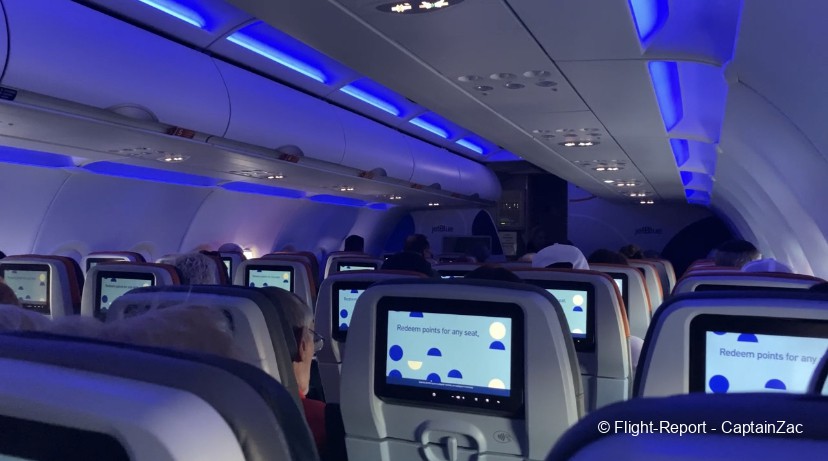 Before departure, I want to comment how beautiful the JetBlue A320 looks with the blue mood lighting. I can't say they outdid Virgin America, but the lighting is even cooler when it is pitch black outside (just wait). 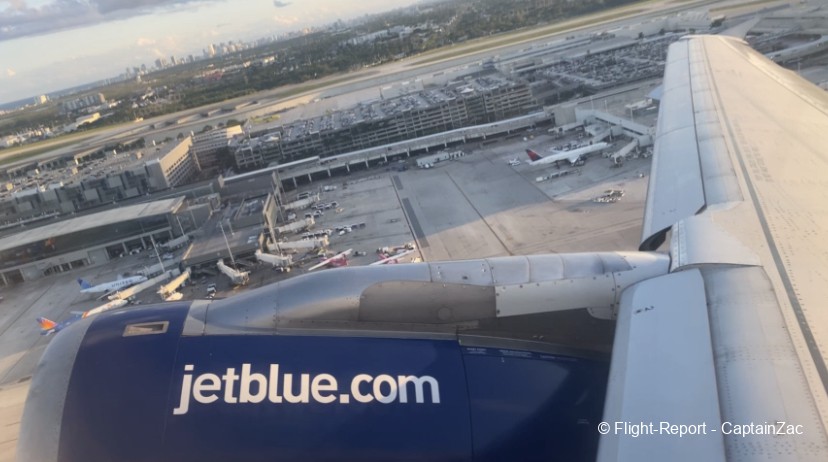 We soon departed FLL, and I got ready to connect to the free JetBlue Wi-Fi, cleverly named "FlyFi". Oh, you didn't hear me? FREE WI-FI. FOR EVERYBODY. JetBlue is the ONLY US airline of offer completely free Wi-Fi for everyone on the airplane, no matter your status with the airline. It is honestly one of the most valuable things about the airline, and it opens up a whole new world of entertainment on the plane. I feel this drives me to flying JetBlue, which is almost always priced lower than the competition anyways. That plus free Wi-Fi on all aircraft, plus free live DirecTV on all aircraft and streaming movies on most of their new aircraft, the entertainment on JetBlue is so impressive.

JetBlue also offers free unlimited snacks and drinks on all of their flights, no matter the length. They actually have a solid selection, and I appreciate that it is not just generic pretzels. Instead, the offer brand name snacks, like Popcorners chips, Cheez-Its, sugar cookies, and Rold Gold Pretzels. They also give you the entire can of the drink, and that is unlimited as well. On their A321NEOs and A321LRs, they also have the "Pantry" in which all passengers can grab unlimited snacks for the whole flight. However, on the A320s, A321CEOs, A220s, and E190s, you can still ask the flight attendants for as much as you would like. 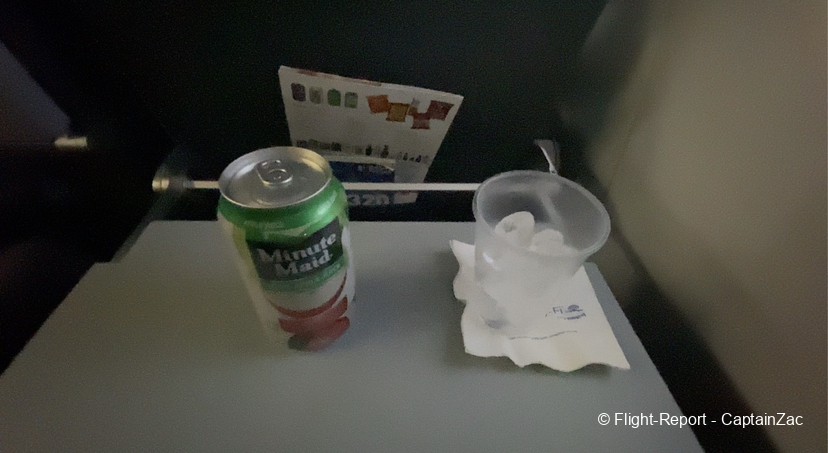 Speaking about flight attendants, the crew on this flight were great. Better than average for sure. I couldn't tell you her name, but the lady serving my portion of the plane drink and snacks was so nice. She was patient, attentive, and always was smiling. 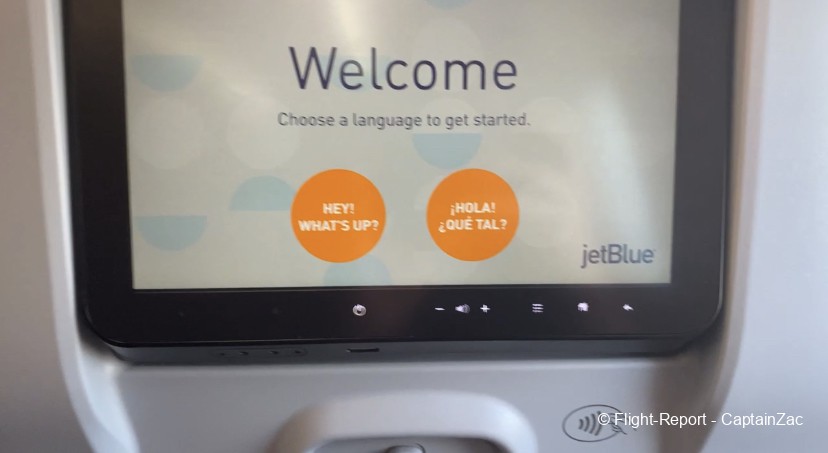 The JetBlue IFE screen has a clean and easy to use user interface, equipped with games, movies, shows, and live TV. Something on their older A320s, E190s, and A321CEOs that I miss is the SiriusXM radio, but it is no big deal since the free Wi-Fi allows me to stream it from the SXM app on my phone. 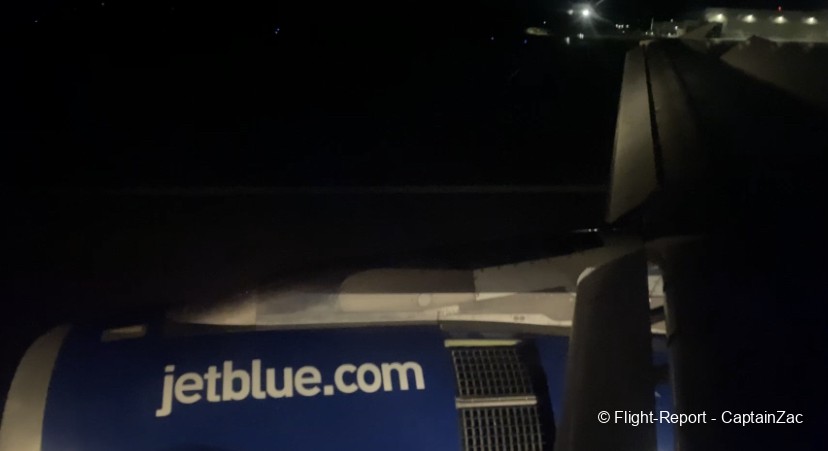 We soon landed in a dark Richmond, ready for our ride to Charlottesville. The Richmond Airport, for the 15 minutes I was there, seemed to be open, comfortable, and just the right size for that city. Picking up a Lyft was easy, and there were plenty of signs around the terminal to help us get to our ride. Overall, this flight with JetBlue was amazing, and made up for the sadness of missing the 717 flight to Charlottesville. Everything from the ground staff to the seats were perfect, and it was a great journey up to Richmond!

This flight was amazing, and everything with JetBlue is still great. If you every have any doubt of flying them, don't! The snacks, entertainment, seats, and crew were amazing, and I would happily fly them again!

He wrote 2 reviews about 1 airlines and 4 airports.