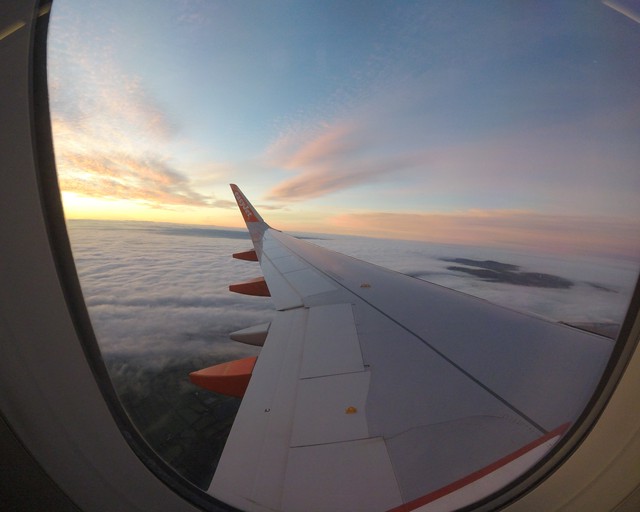 #8 out of 12 Low-cost airlines A minimum of 10 flight-reports within the past two years is required to appear in the rankings. 706 reviews

And for once I'm not saying that because of the Christmas décor that the airport terminal has adorned with! 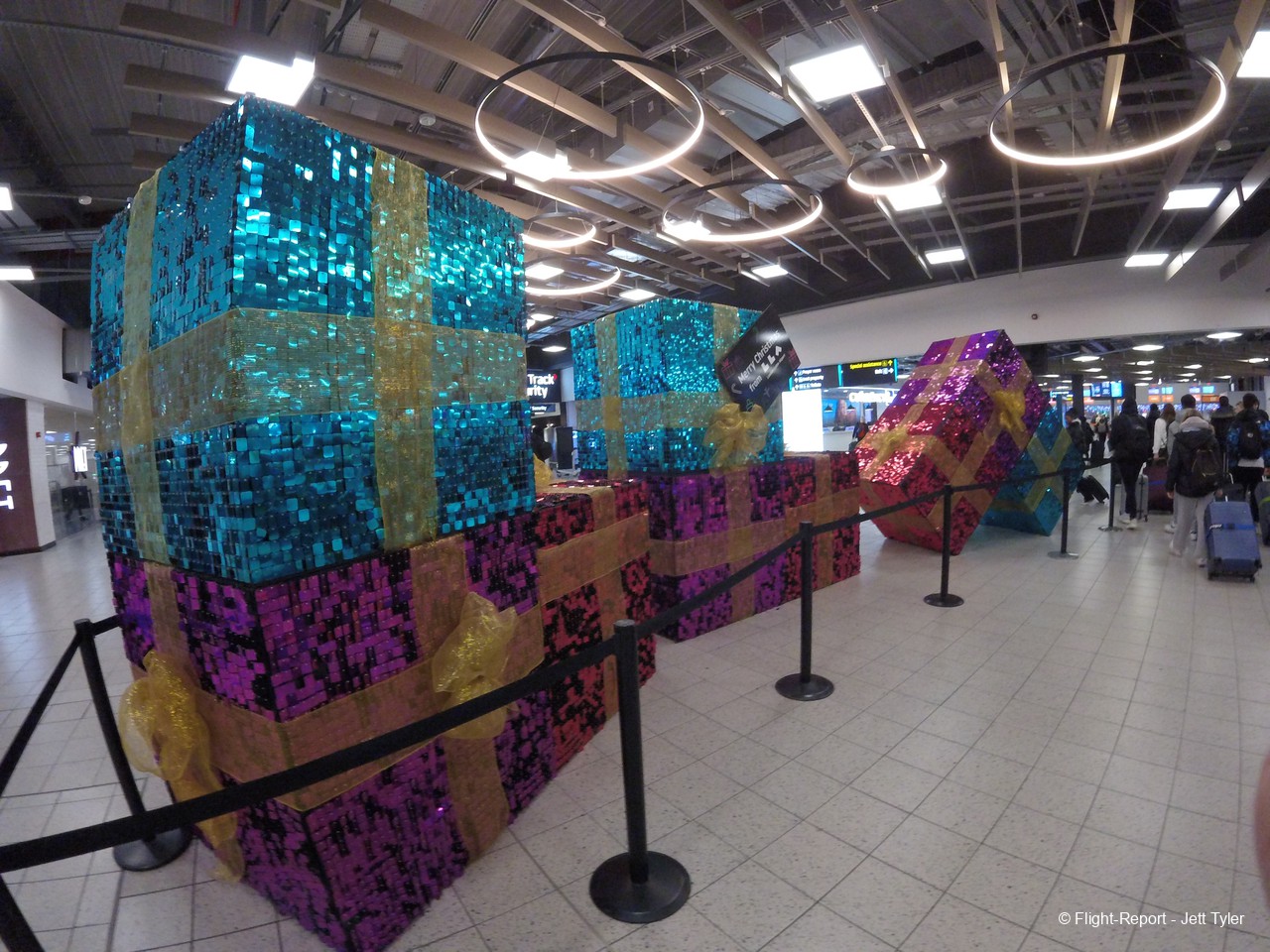 The outside has been modernised and expanded, there are almost no construction works going on when I was there, the new DART transport link is almost up and running. Overall it was a good experience landside. We had a short wait from going to the long-stay car park, which was £25 for one day (not too bad for a "London" Airport) to the Terminal on the free shuttle bus. Going airside, security was quite an easy affair as there was almost no major wait in the que, when I went it was a breeze through with a minute or two at most just before getting onto the security section to have the bags checked.

The only drawback to Luton Airport is how busy it gets in the main centre of the Terminal airside, where everyone congregates, fittingly for the LTN Accountants, around the main shop and restaurant area. There is a Lounge for the airport which I will give a shot one day in the future, but this wasn't to be the case today as I was part of a four person group. 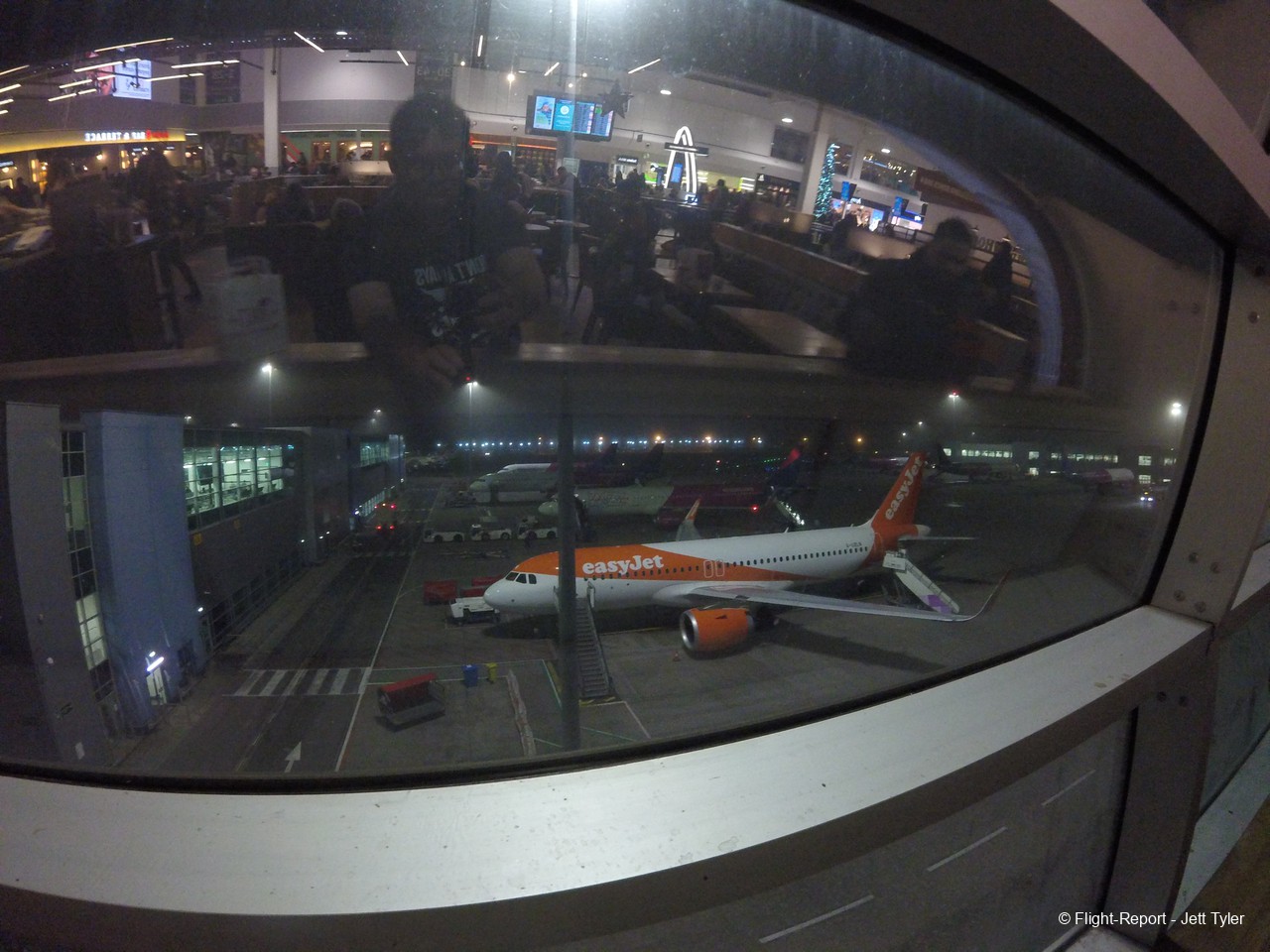 A Pret-A-Manger coffee shop occupied the once public seating by the main window that overlooked the apron, luckily two of the party I was with chose to enjoy "Pret" breakfast over the easyJet "Bistro", so it gave me an excuse to grab a cheeky ramp photo overlooking pre-dawn Luton.

We soon found out we had Gate 1, which was one of the bus gates used by Luton and it was a bit of a hike, it can easily be done in about 10 minutes though. The section that holds Gate 1 is in what could be deemed an original part of London Luton Airport, as it looks quite dated compare to the more "modern gate facilities" elsewhere at the Airport. 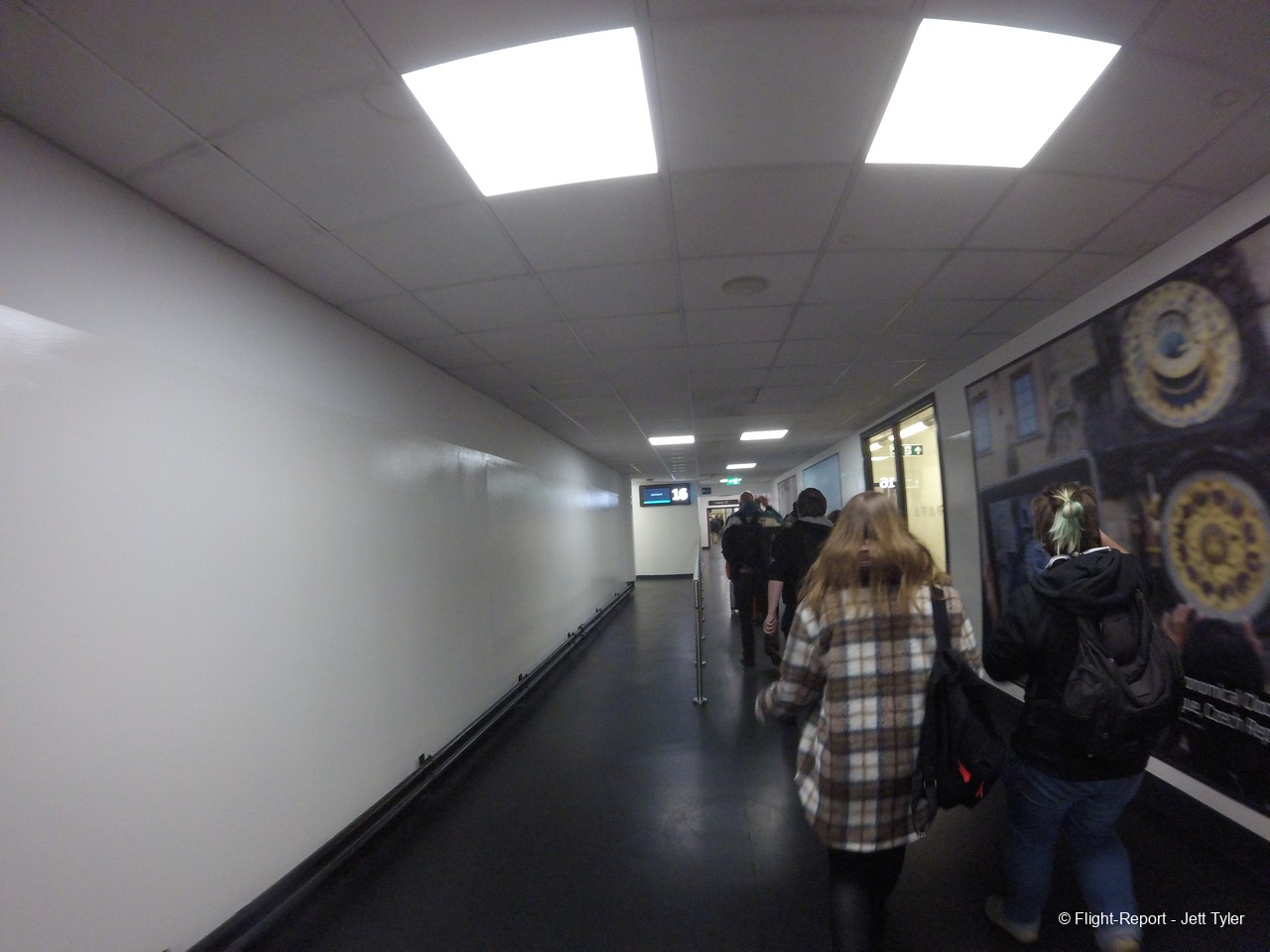 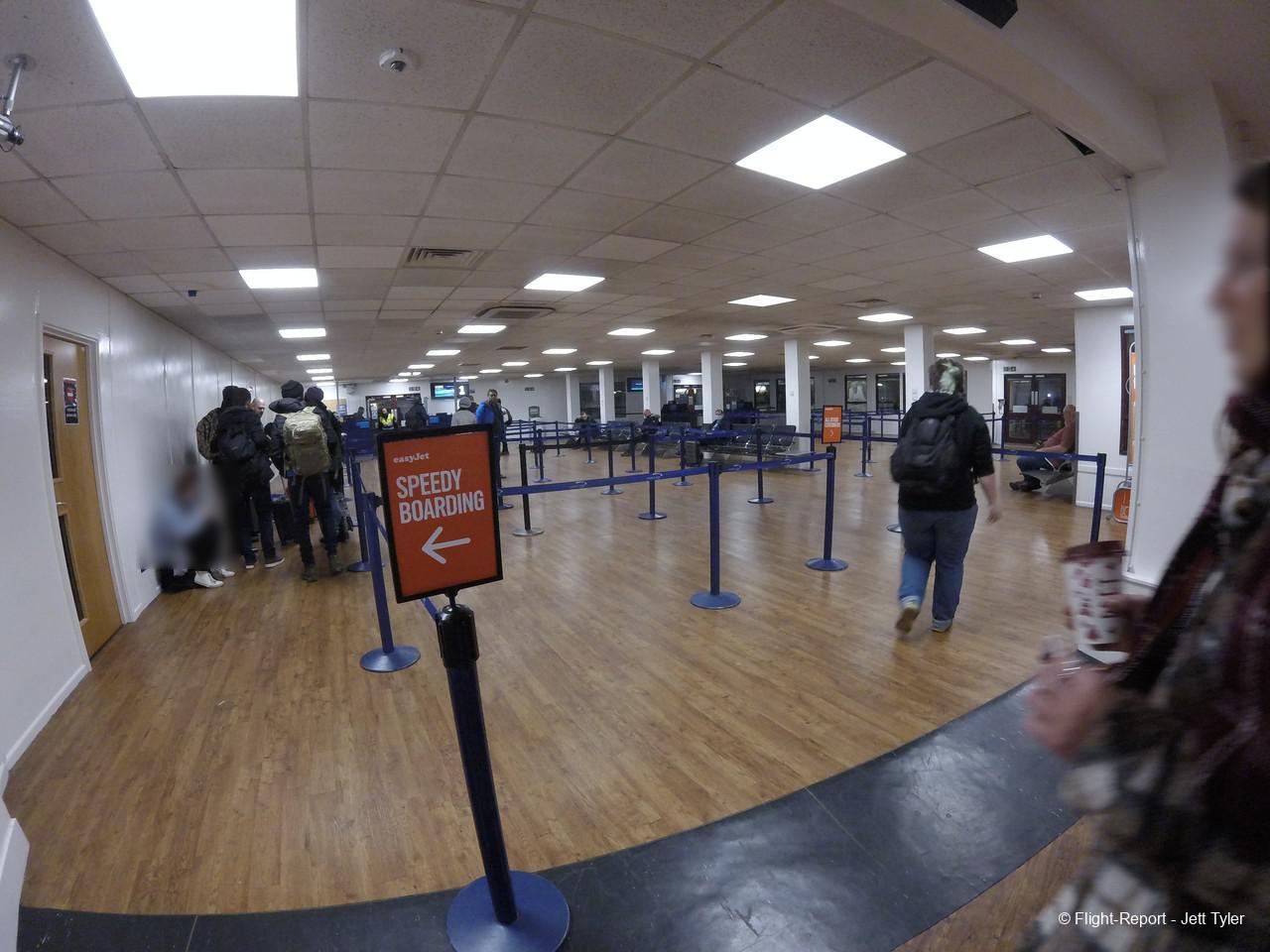 We started boarding on time and made our way onto the bus. It was a very quiet flight (about 60 pax of 186 available seats) with a load factor of 32%. 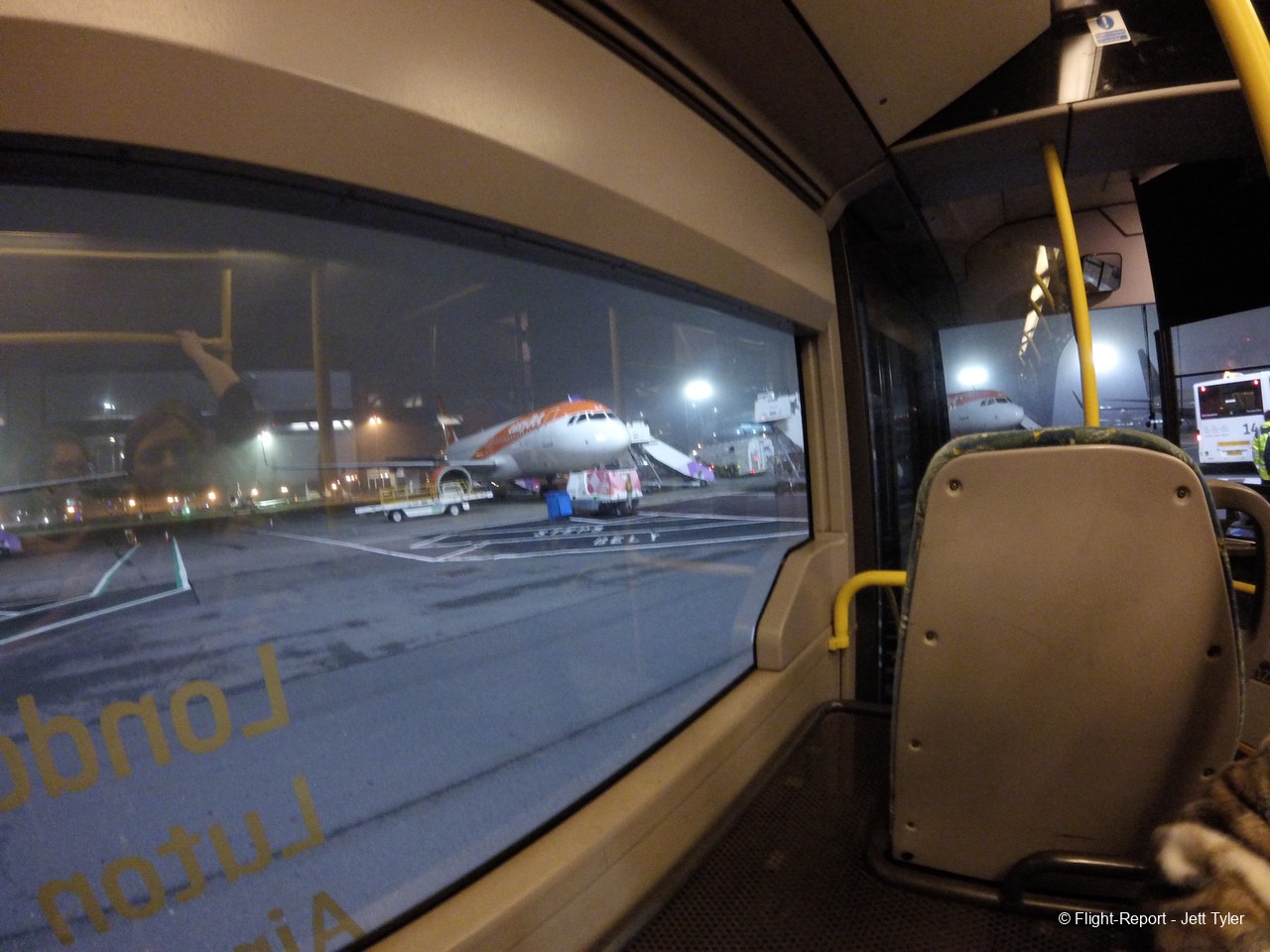 Our ride from the remote stand would reveal our aircraft for today as Airbus A320-ceo(WL), G-EZWL. This Airbus A320 was built in July 2013 (Also around the time I left Secondary School) and has been flying for easyJet ever since, this aircraft was delivered in the old livery with the conventional wing-fences. The sharklets appear to have been added in late 2013 or early 2014, whilst the new livery was painted onto this aircraft in either late 2018 or early 2019. The new style easyJet Airbus A320-ceo (and early A320-neo seating) were introduced in December 2016 when the capacity was increased from the original 180-seat configuration to 186-seat configuration. 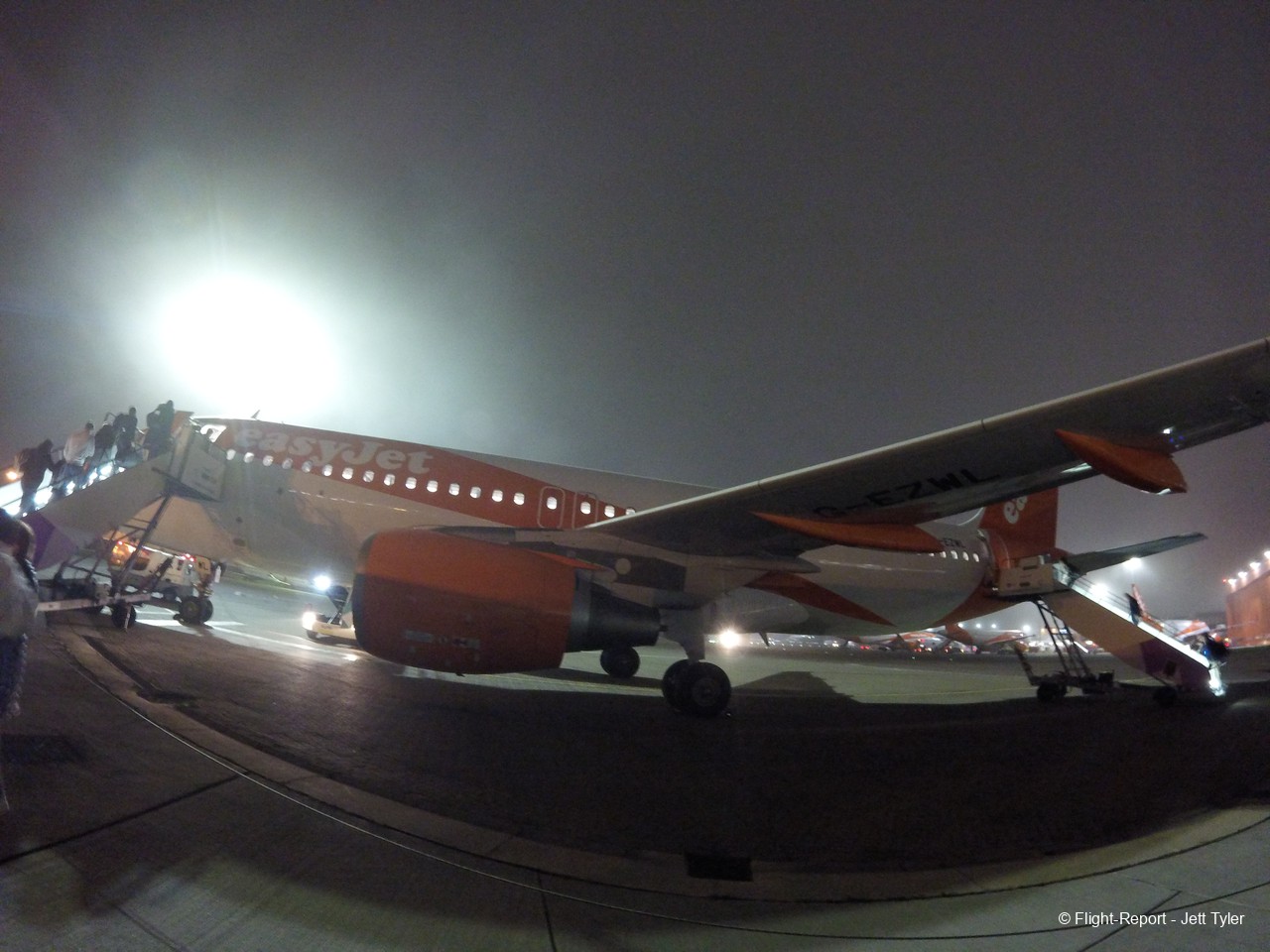 We quickly boarded and found our seats. I got not only a whole row to myself with my choice of window seat (17A) but the row on the right was also very empty. NICE!

Continuing my earlier comment about the easyJet cabin, this Airbus A320 had the slimline seats with the black-orange fabric covering. Whilst most of the A320-NEO/A321-NEO fleet has these seats with all black leather seating, I think this is a slightly better seat design. The original easyJet seat design is solely on the Airbus A319 fleet, who won't see the newer slimline seats. 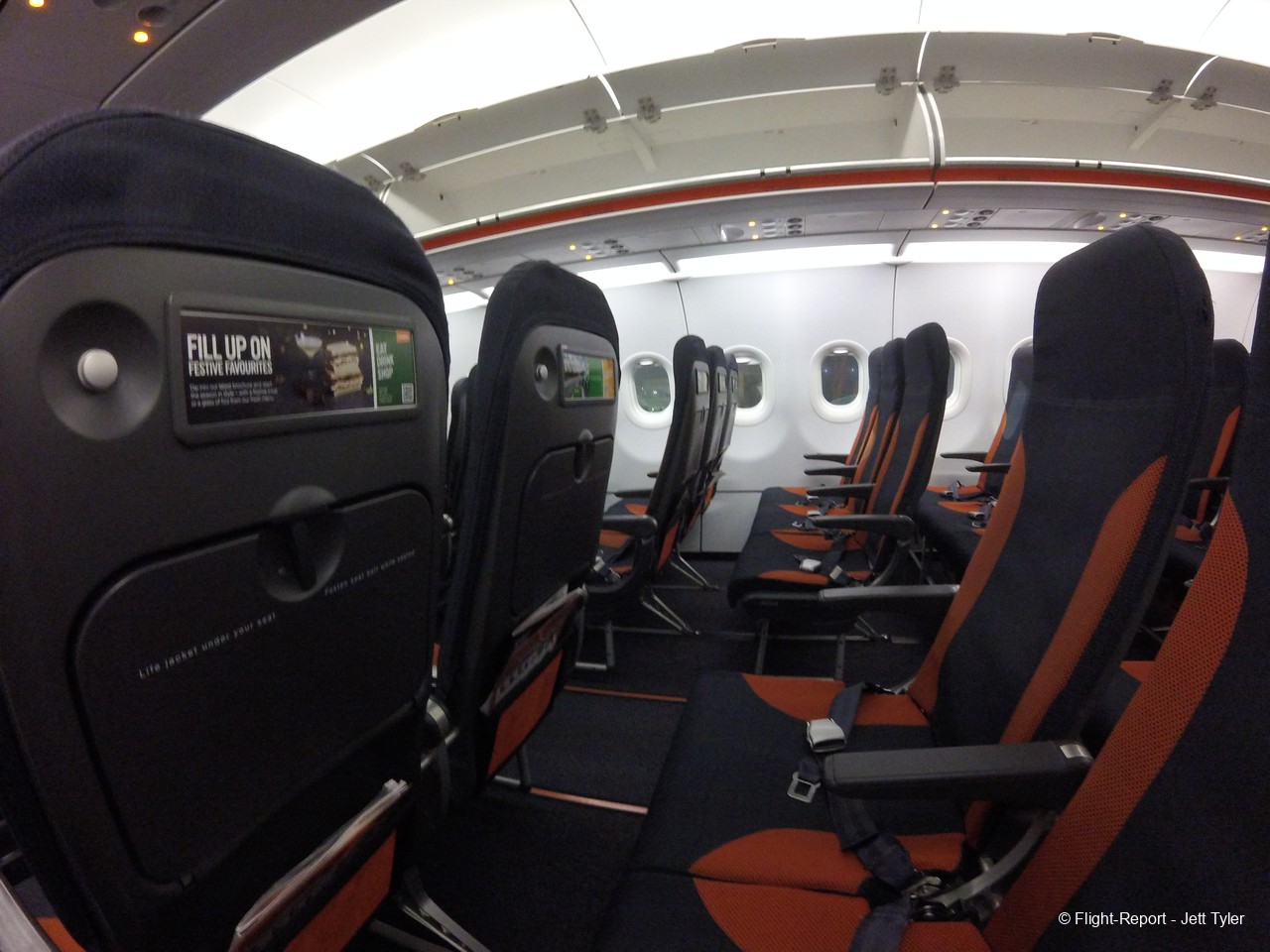 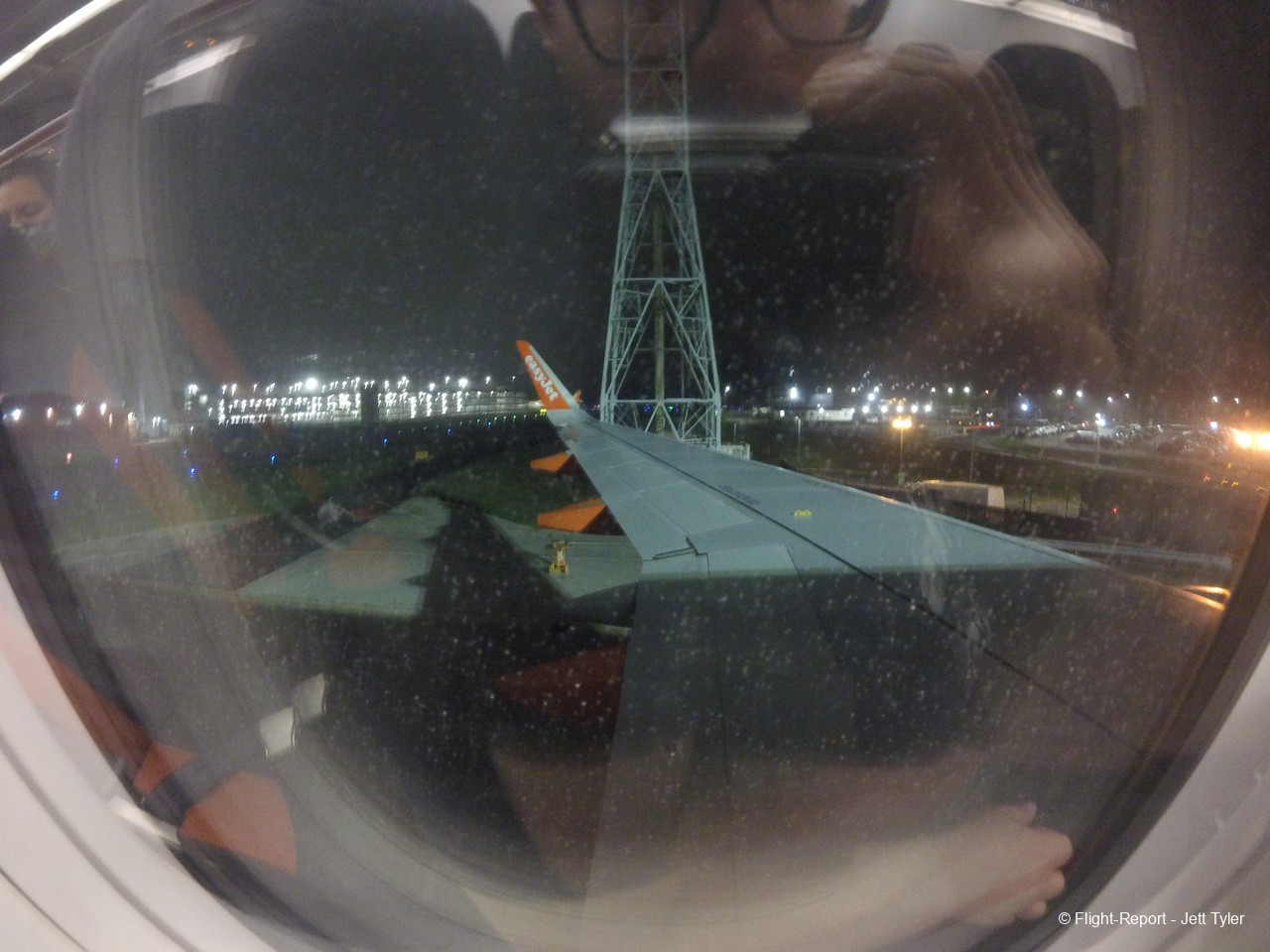 It was soon time to go and the crew did the usual in-flight safety brief. Followed by the news that all phones had to be turned off completely due to the low visibility departure out of London Luton, it was badly fog-bound. Though one "stupid muppet" refused to follow the instructions for a while and argued with one of the stewardesses over it… I give the stewardess my sympathy, this guy from overhearing their discussion sounded like a total dipstick… 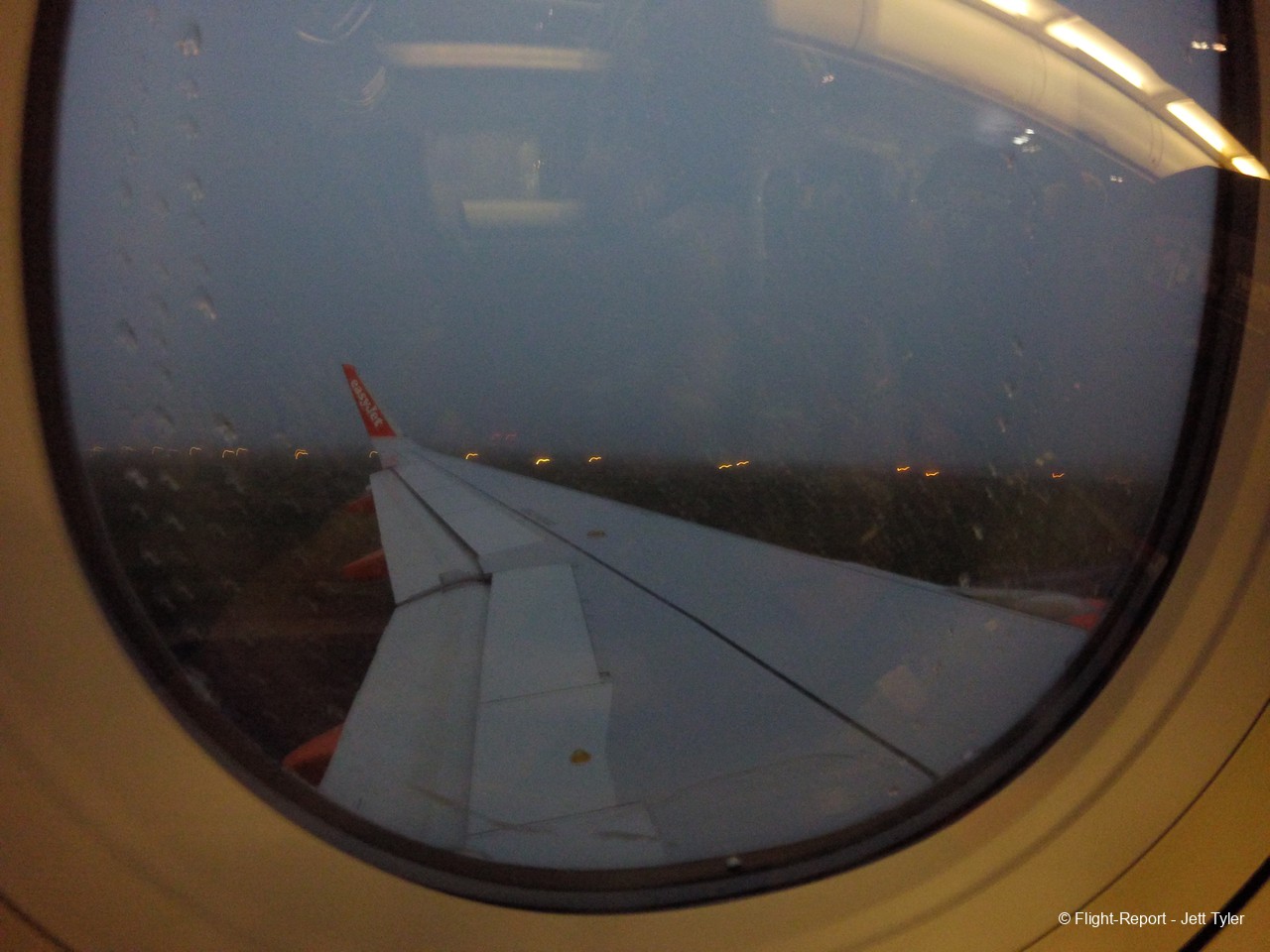 I managed to film the departure on my GoPro, which didn't have any Wi-Fi or emitting signals coming from it (its quite an old model now), and within 10 seconds of lifting off the ground, we had entered the low clouds. Hot damn it was some low cloud that day! 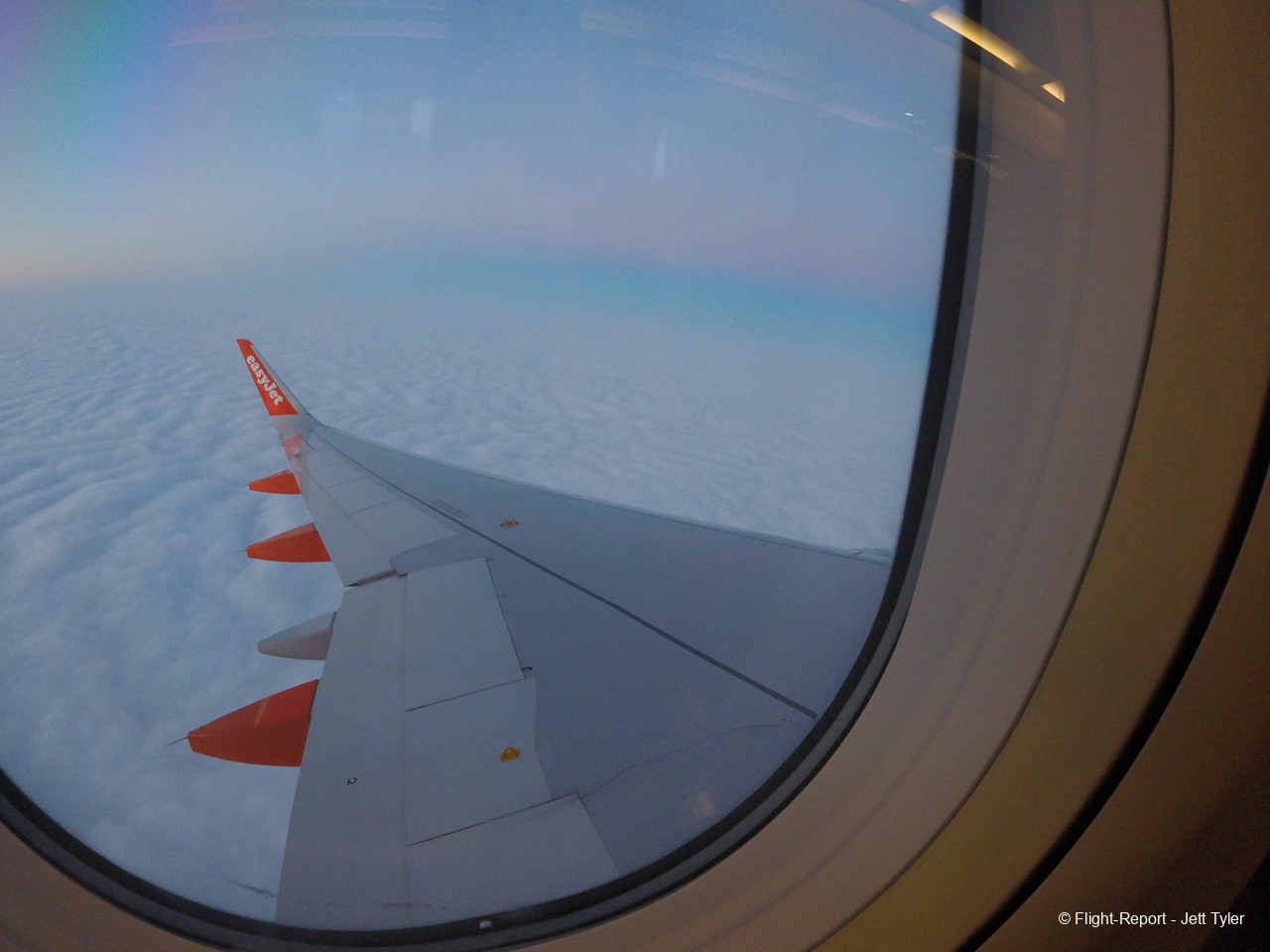 Wasn't long before we punched through the heavy clouds and we had the early morning sunrise in full swing, leading to some beautiful views for this morning's shuttle over to Belfast International Airport (aka. Aldergrove Airport).

For a bit of history: easyJet first began serving Belfast International in 1998 serving the airport with Boeing 737-300 from London Luton Airport. The Belfast International Airport is now a 30 destination strong network and base for easyJet at the time of writing (December 2022). Belfast has long been easyJet's main focus for Ireland as they don't fly to the Republic of Ireland and the airline has recently began selected intra-UK operations at nearby Belfast City Airport. 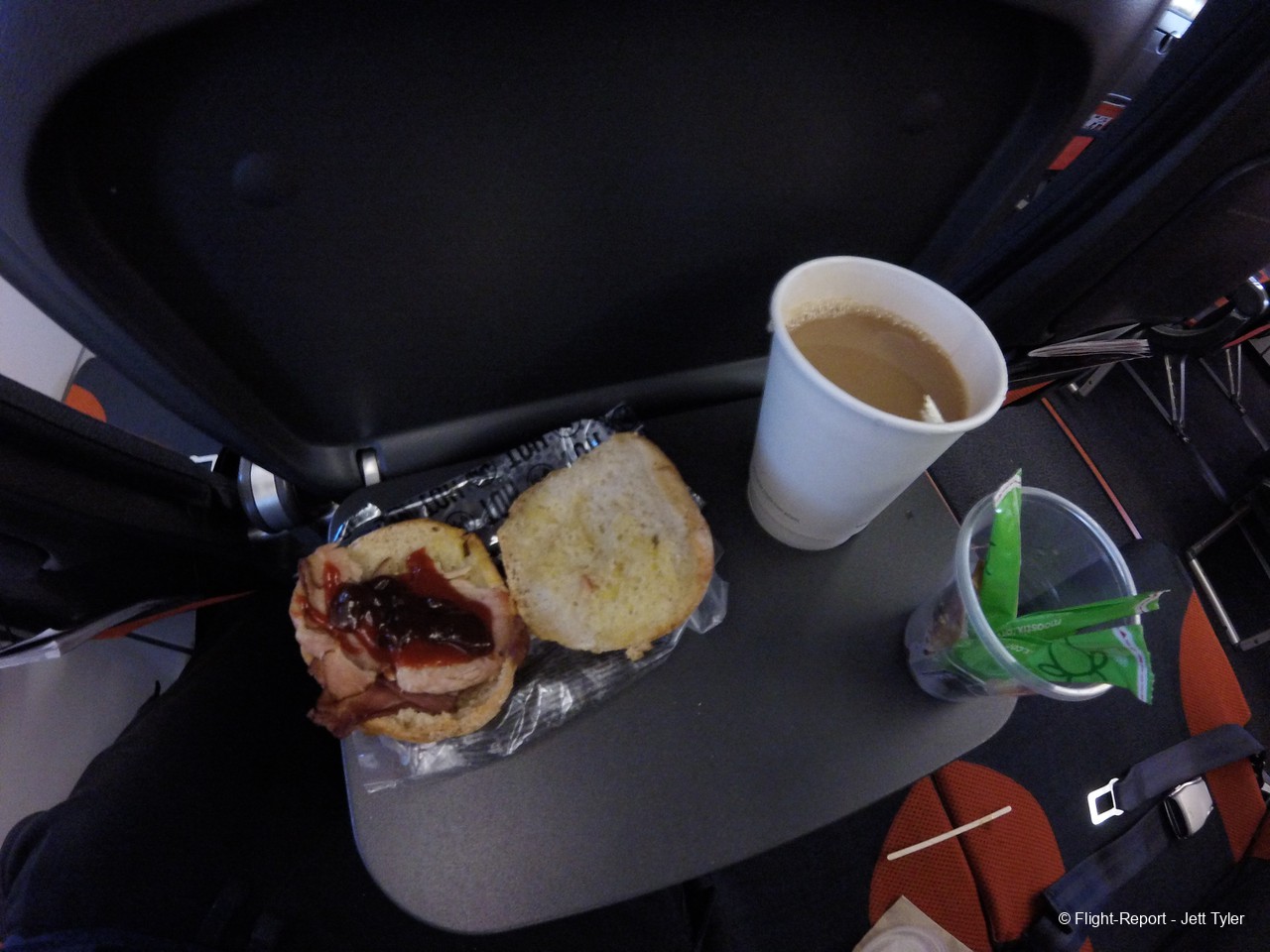 Grubs up this morning!

I ordered myself a solid breakfast for this flight. A nice bacon roll with some ketchup and brown sauce and a Hot Tea. This was included in a meal deal by the Airline for £6, which might sound bad if a café was selling this, but for airline prices- I'll allow for it. 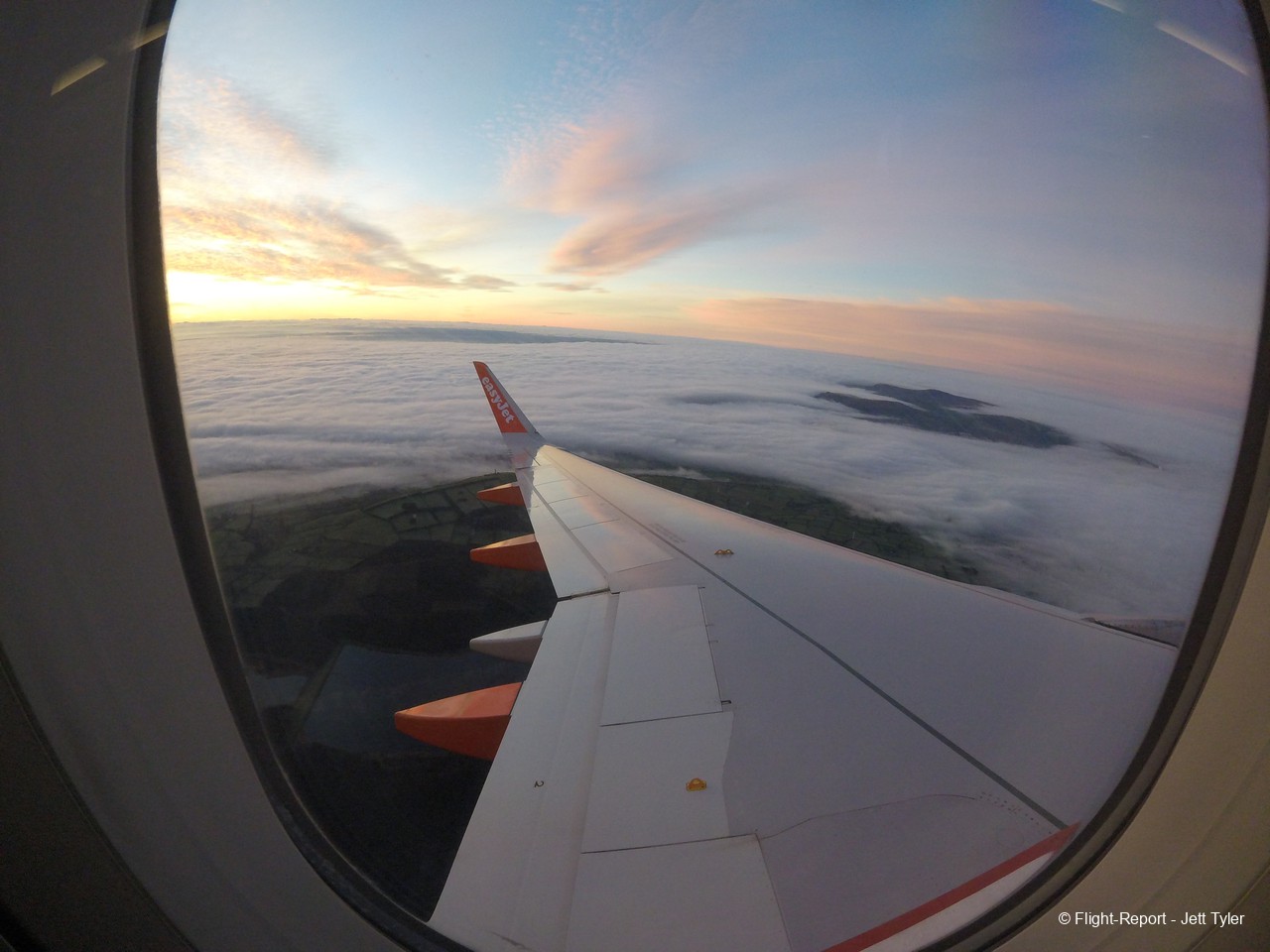 What a beautiful view that morning! 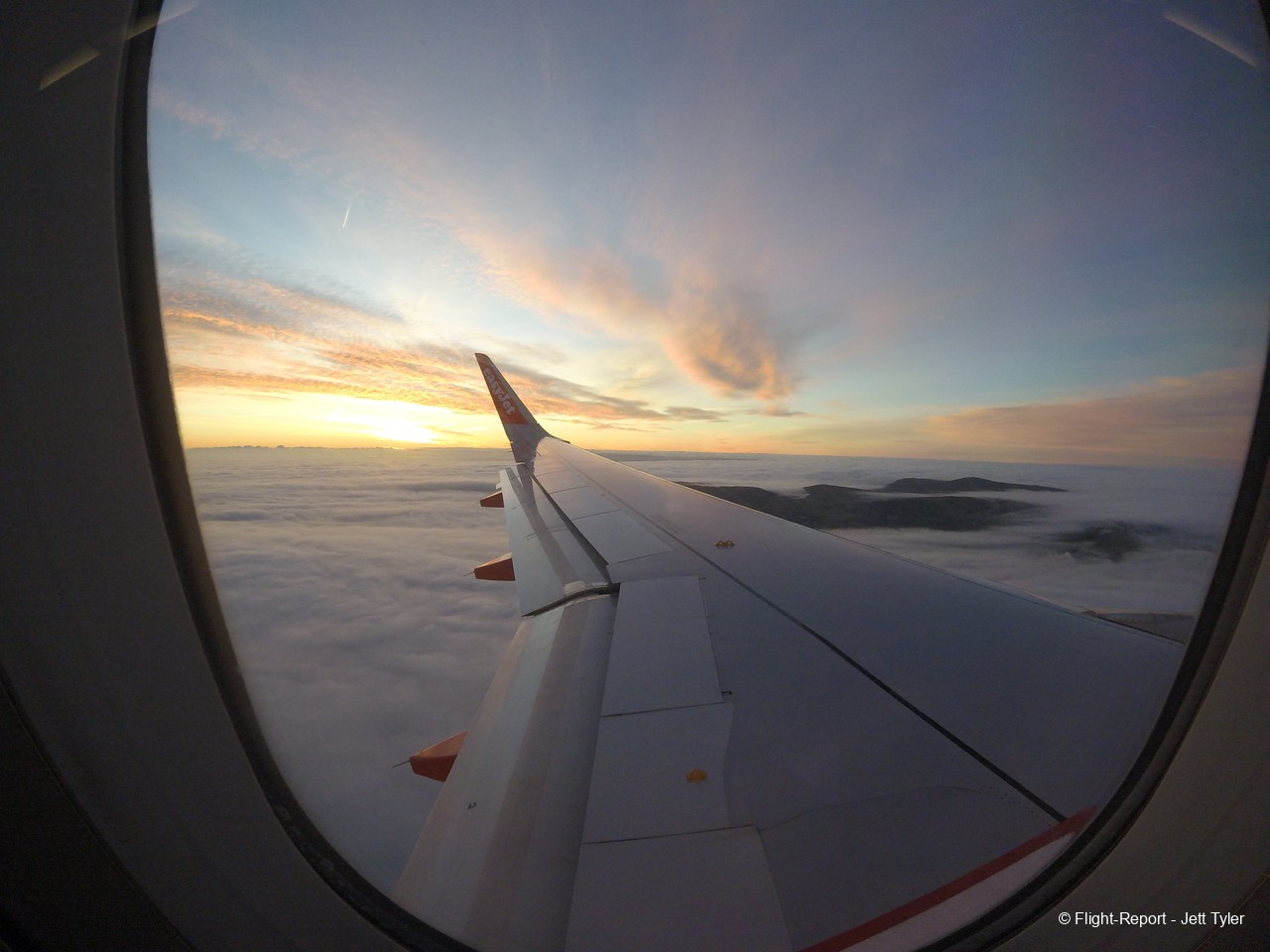 We began our decent into Belfast International before we knew it, as you can see from above we had some beautiful views out of the window before we dropped below the clouds.

The weather in the mainland UK had crossed over into Northern Ireland our decent into rural Northern Ireland for Belfast International was cloud and fog bound until the final seconds before we landed! 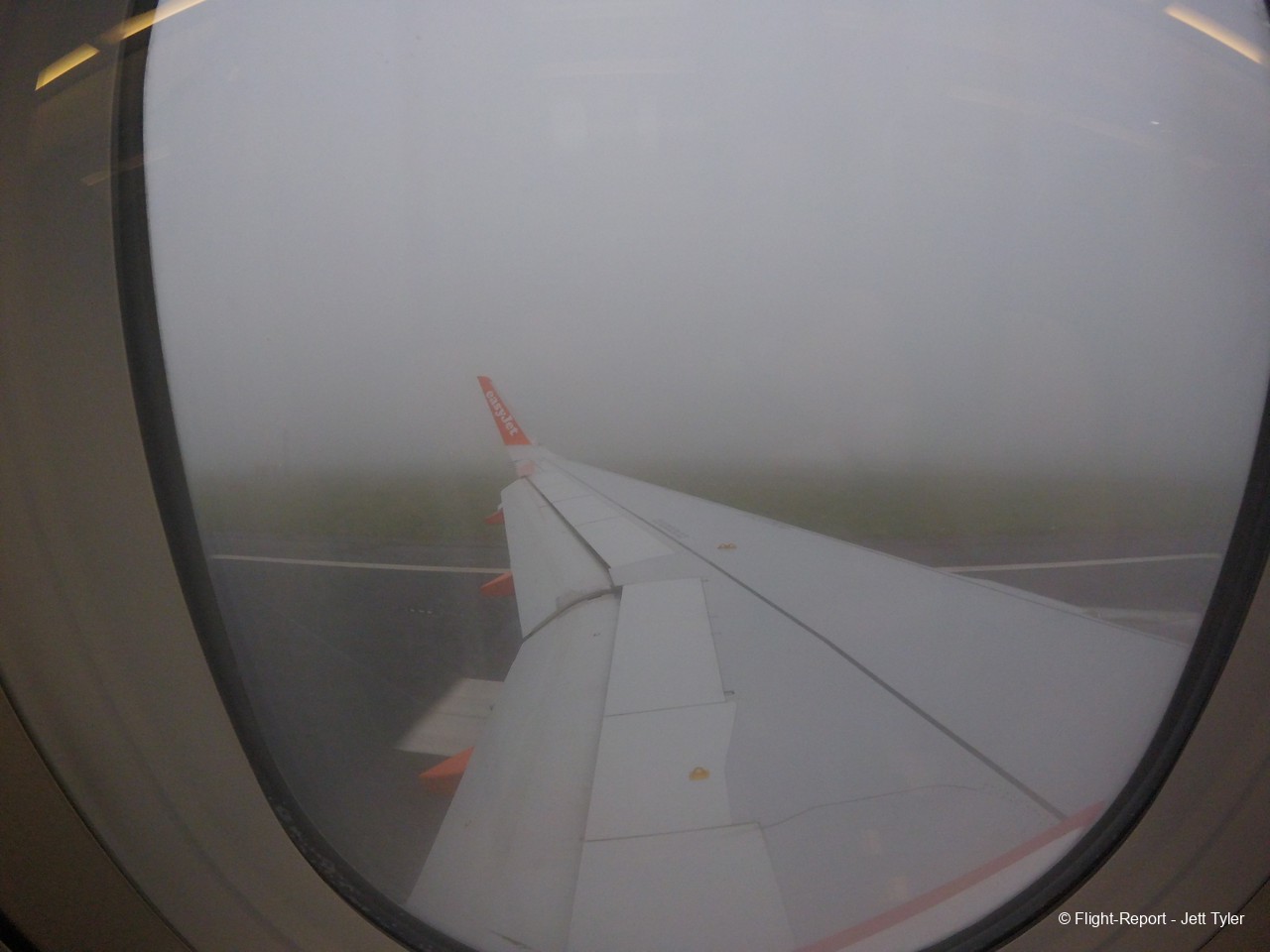 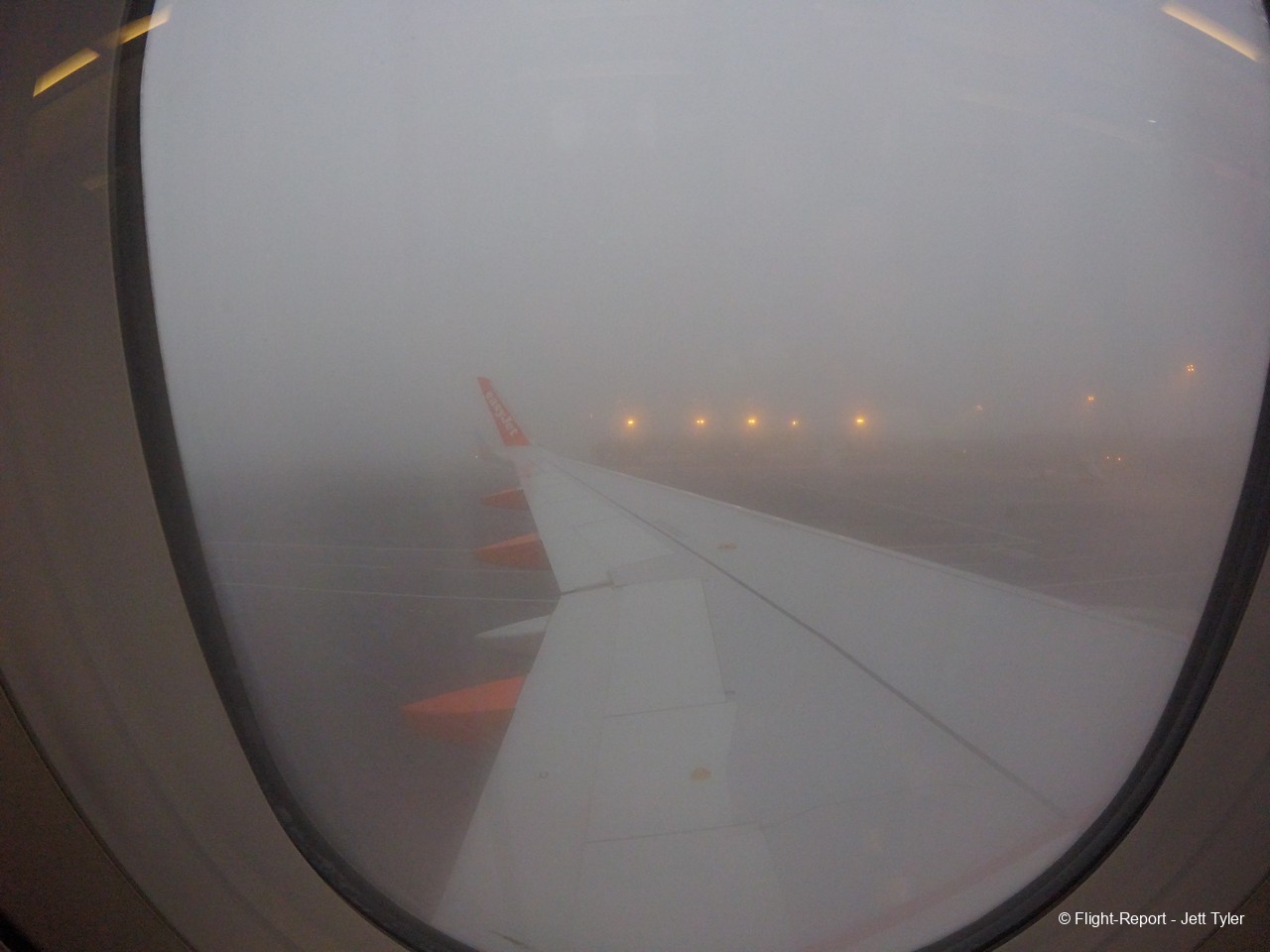 After an interesting landing, the aircraft taxied around BFS, though it took a few minutes to figure out where we were until some more planes came into light through the thick fog. However we soon parked on a remote stand right in front the WELCOME TO BELFAST sign which was adorned to the walls of the Terminal building. 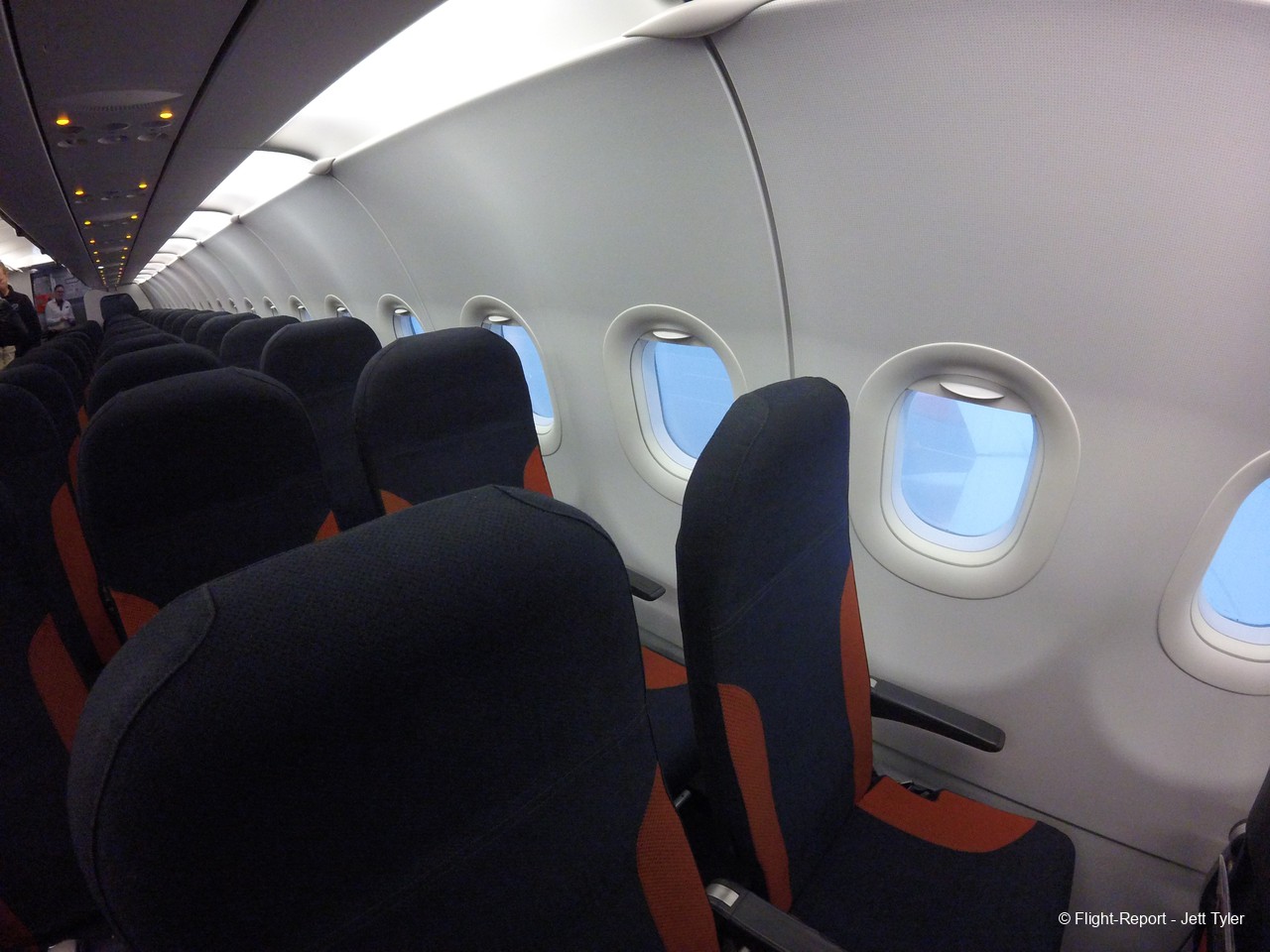 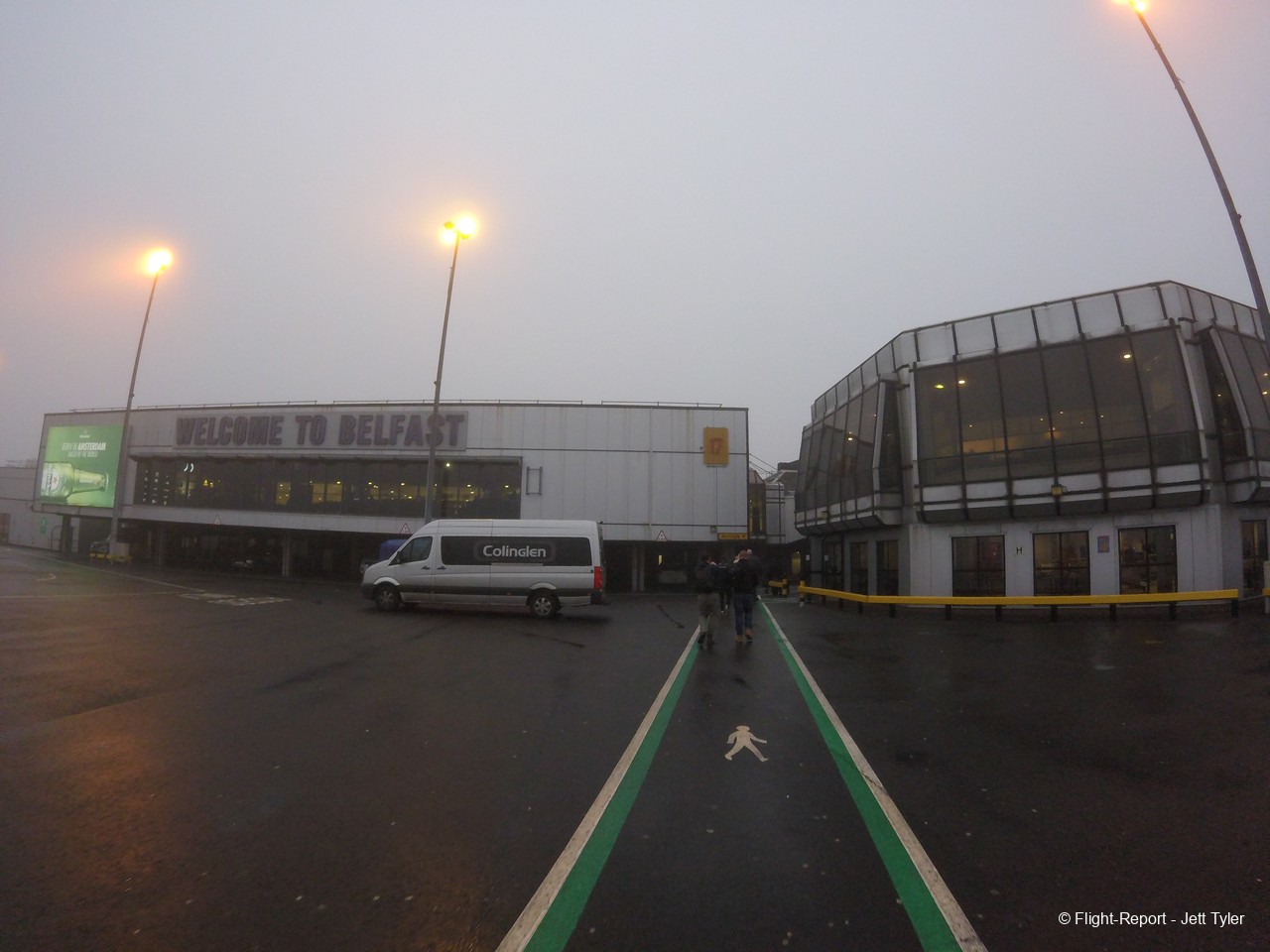 Welcome to Belfast! The panoramic windows make up the observation terrace, though it has been closed because of the pandemic.

We left the Airbus A320-ceo so it could make the return trip to London Luton later on. We had a quick look around BFS Terminal before we grabbed a bus into the city centre. Check out the funky giant model on display! 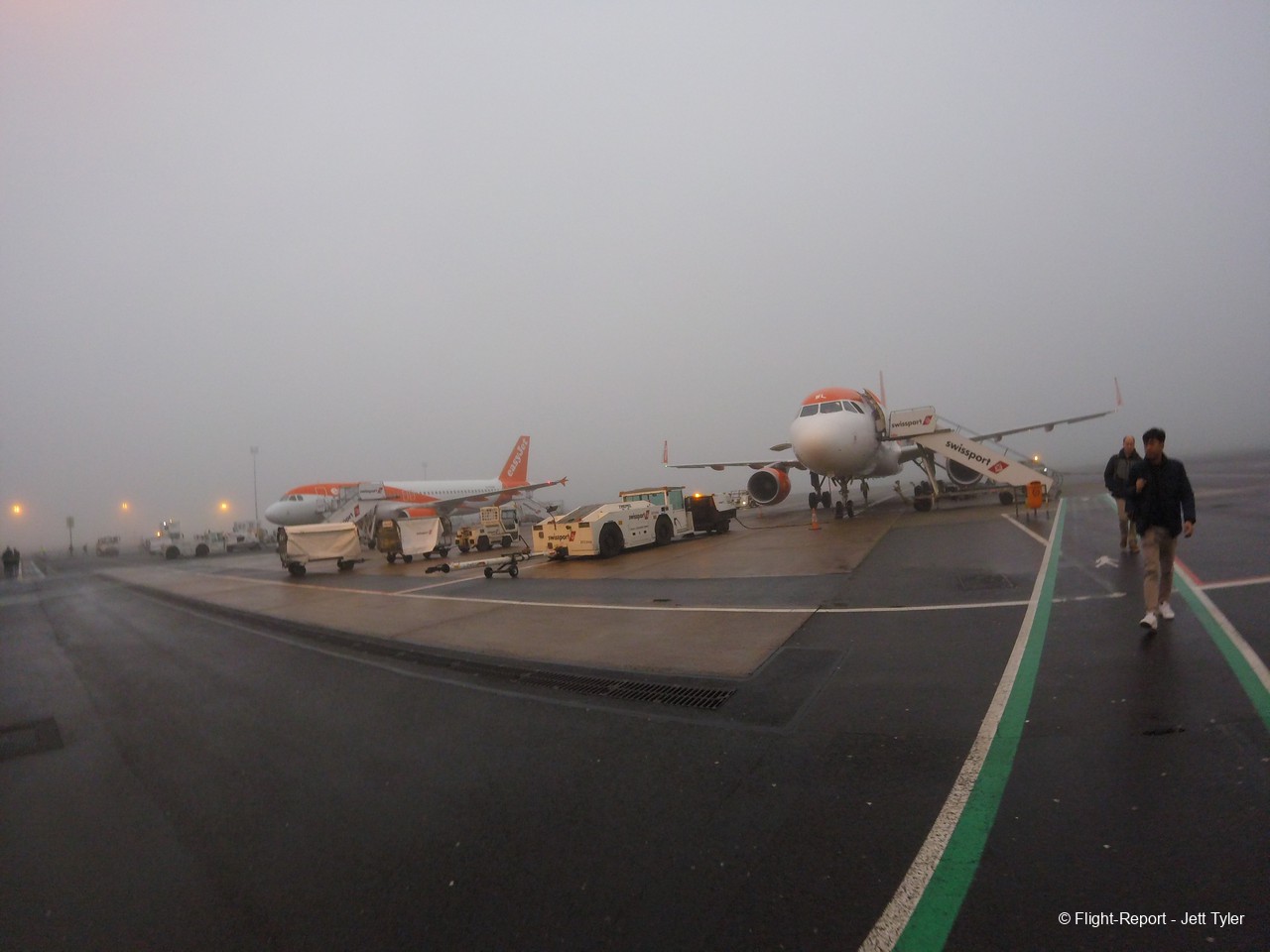 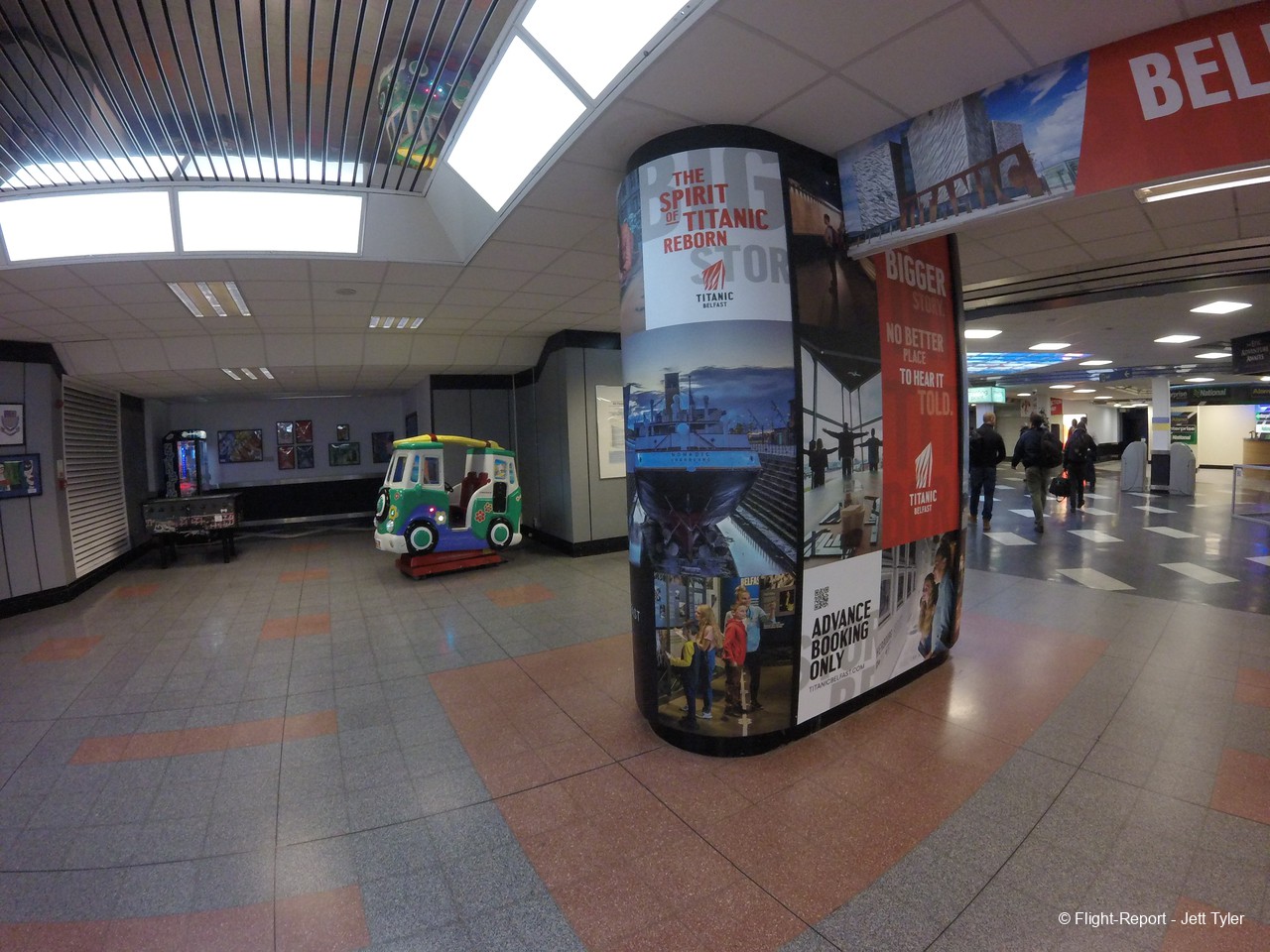 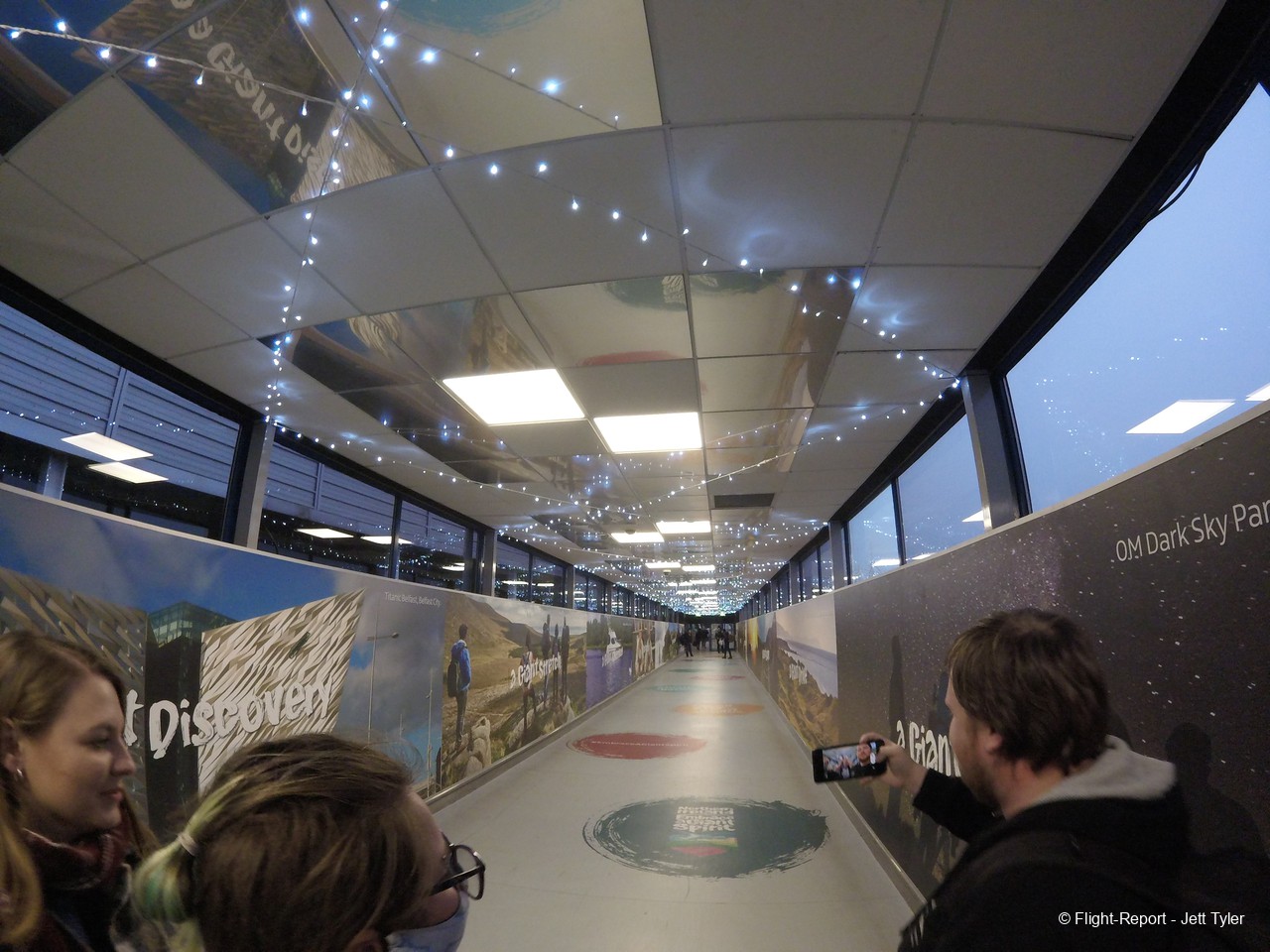 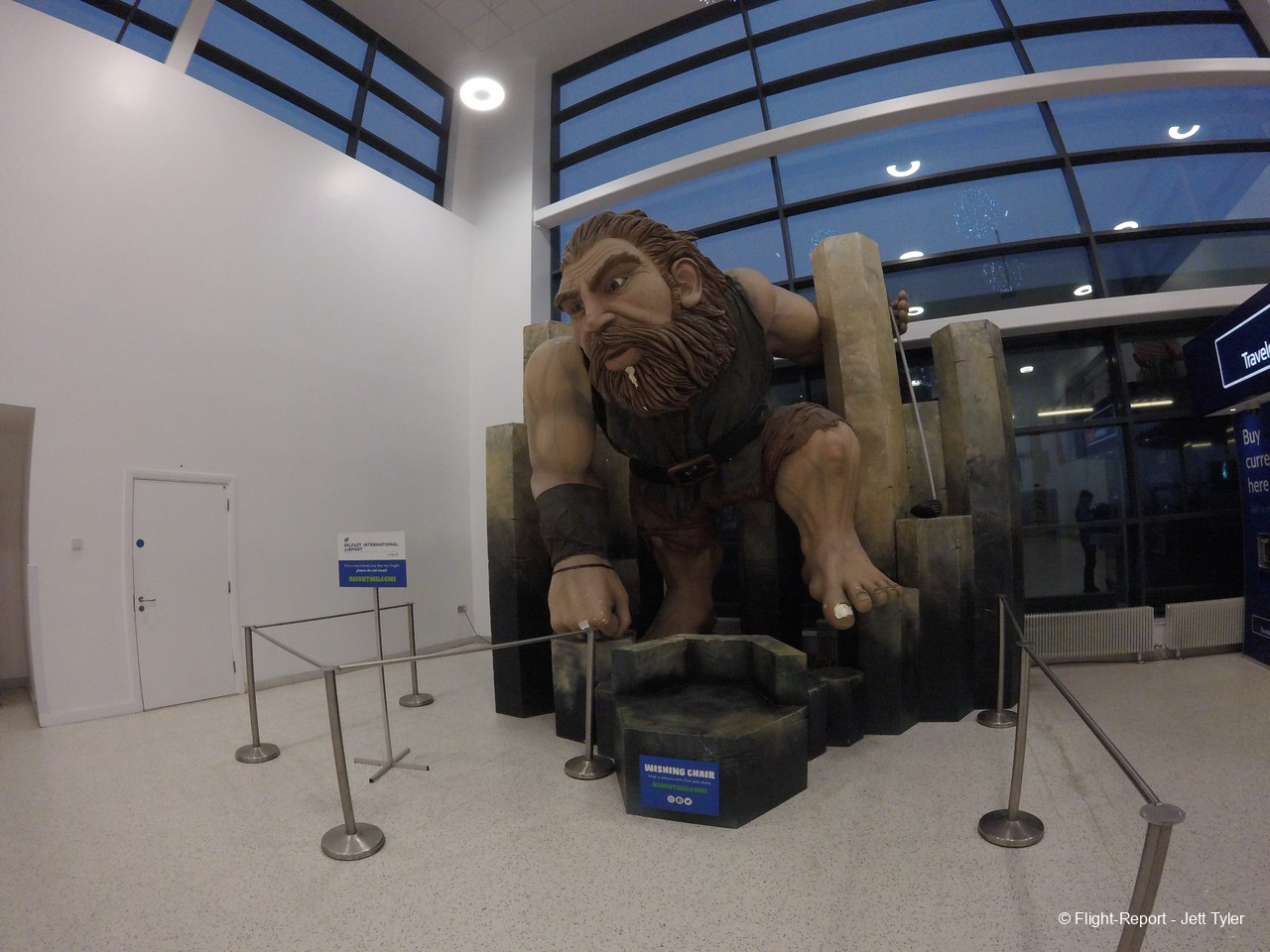 Good to give easyJet another dusting off in 2022, they're a good airline to fly with- however I don't get to fly with them much as I used too.

Belfast International is a bit more basic and not as nice as its rival Belfast City Airport, but its a good airport with the needed facilities. It's easy to get to and from with public transport. I am looking forward to the viewing area being reopened now the pandemic is in the UK's rear-view mirror.