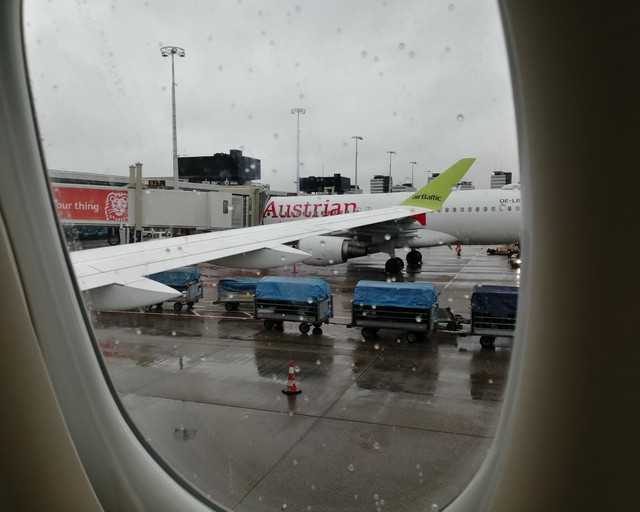 #1 out of 12 Low-cost airlines A minimum of 10 flight-reports within the past two years is required to appear in the rankings. 68 reviews

This is the first section of my winter break in New York. It will be my first time in the USA and the first time in years that I fly a traditional airline, the last being Lufthansa short haul to SOF through FRA.

Today we're flying SWISS to JFK with a stopover in ZRH. This specific flight is operated by Air Baltic, the national airline of Latvia, due to agreements with SWISS. However, they fly the same A220-300 aircraft and should provide a similar service.

I board the first train of the morning in Groningen and after a couple of hours and a transfer in Zwolle, I'm already at Schiphol Plaza. Definitely one of my favourite features of the airport; it has local, long distance and even high speed rail connections without need for a shuttle.

AMS is as peaceful as it gets today. I skip check-in since I'm traveling with hand luggage only. I've heard horror stories about security queues during peak season, and experienced them personally in EIN, but now that the holidays are behind us the queue isn't intimidating. The single terminal setup is quite practical, which in combination with the inbuilt long distance rail station makes it one of the best airports I've flown from. 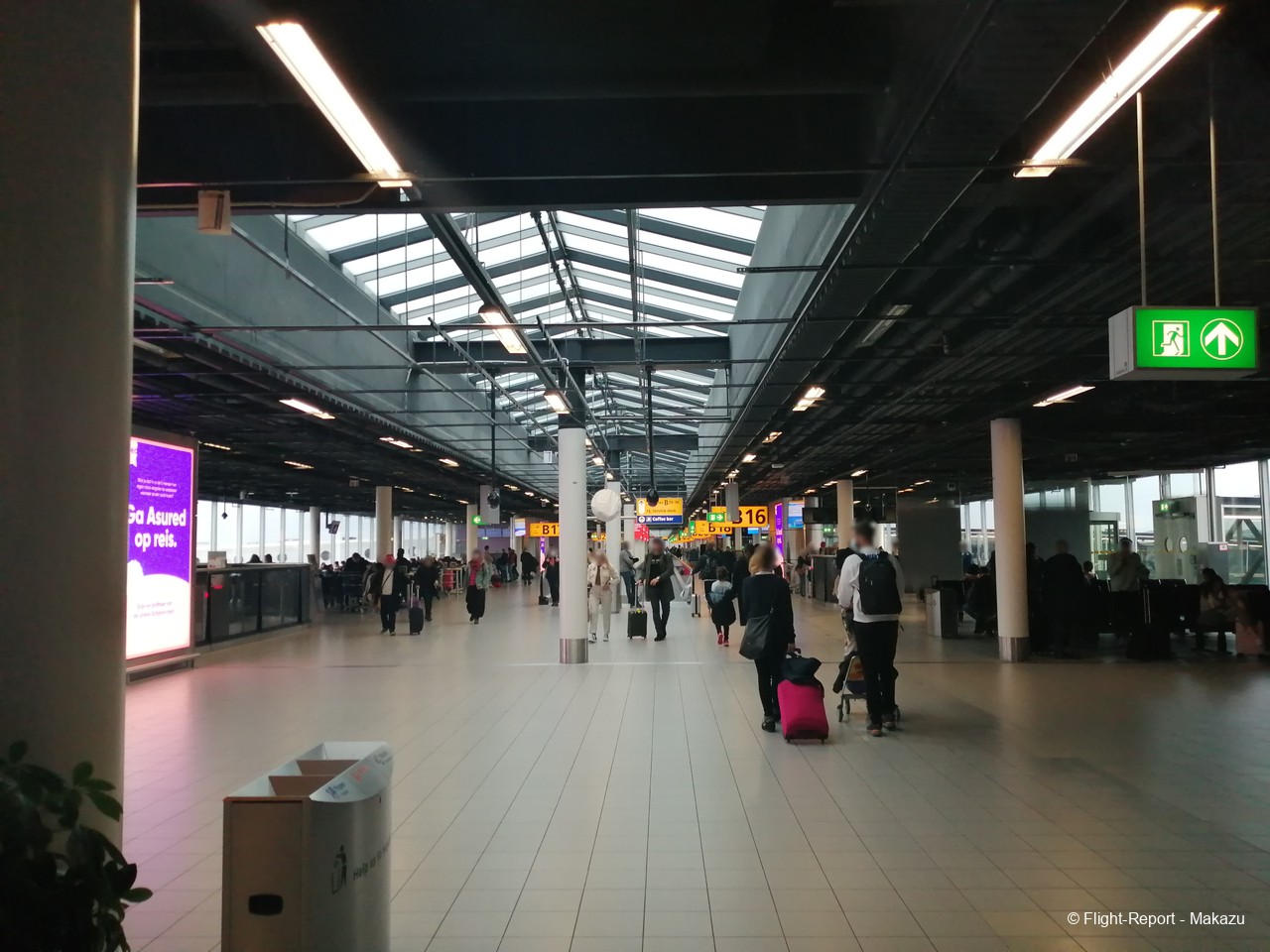 Security in AMS even lets passengers bring drinks through security, though they have to be scanned with a special machine. It takes longer than expected, but eventually I am heading towards concourse B with my trusty water bottle. The pier has decent views of the Kaagbaan, which is being used for departures. 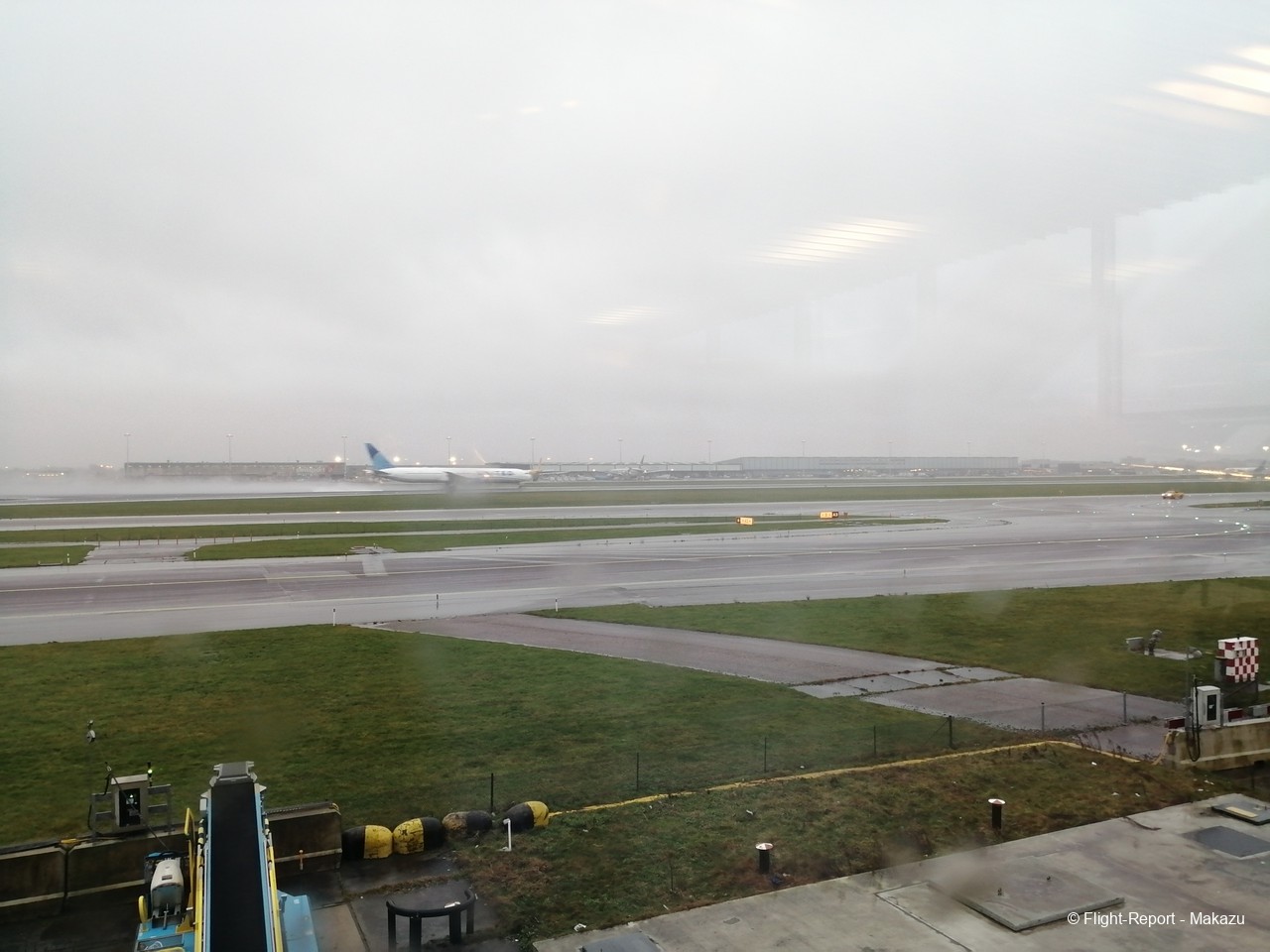 The airport features multiple seating areas where travelers can wait for their flights, including multitude of charging stations so passengers can work, read or just chill until their flight boards. There is decent free Wi-Fi. Our gate today is B35, where our flight is nowhere to be seen. We are notified that our flight is almost an hour late due to weather in AMS and operation complications in ZRH. I try not to worry about my connection, since I have a single booking through SWISS. 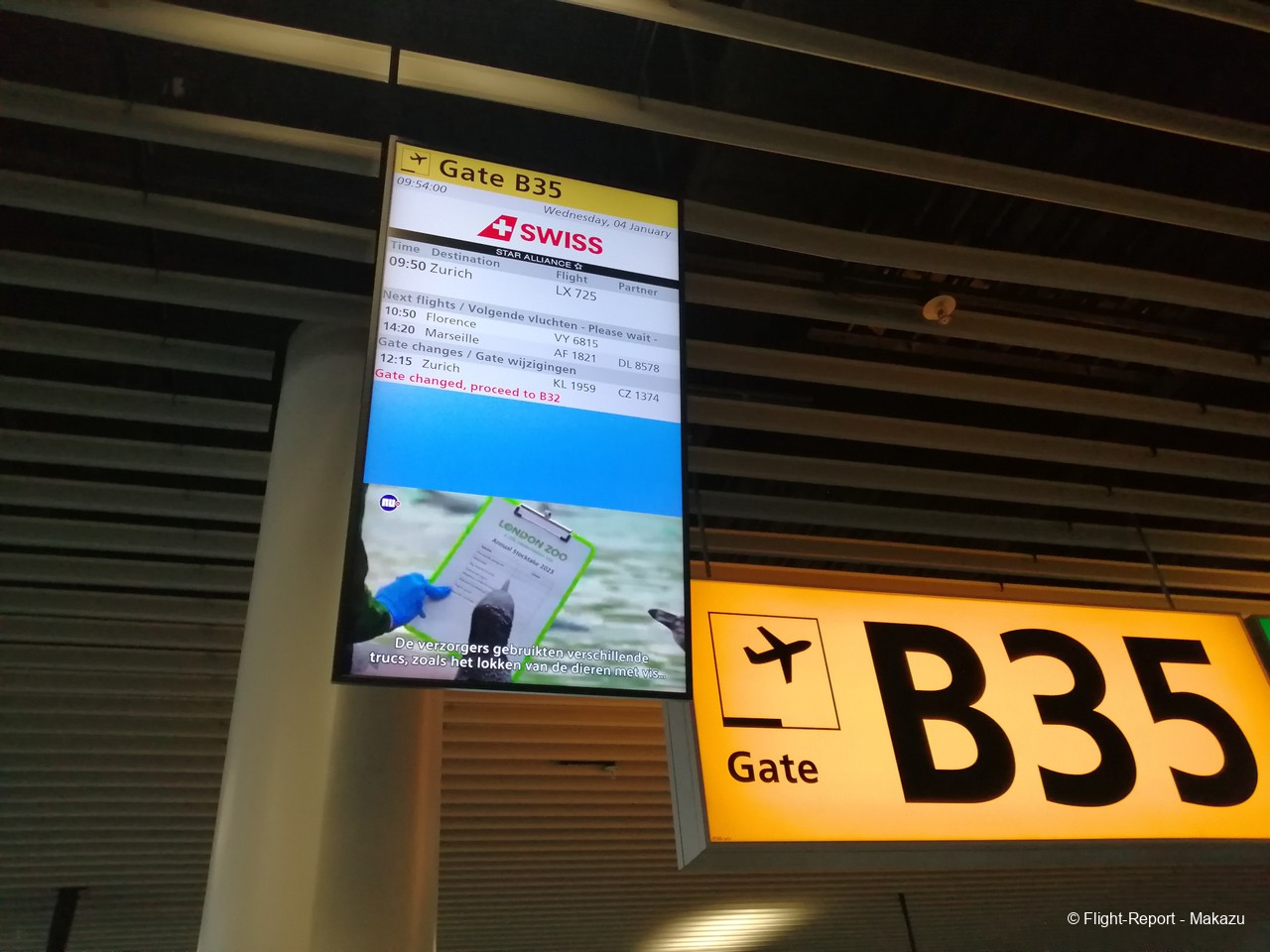 Finally YL-ABK arrives. It is a brand new A220-300, delivered in August last year. The livery looks good and fits with the aircraft. There's nothing groundbreaking, but it's recognizable and elegant. We board well past the scheduled time and I head towards 27F, which has decent views. The seats are quite comfortable overall. They recline and legroom is divine compared with my recent experiences: Low cost carriers and Lufthansa short haul. The tray table is wide but short; it may accomodate some laptops but others may be a bit wobbly. There are small screens overhead displaying flight information in English and Latvian. 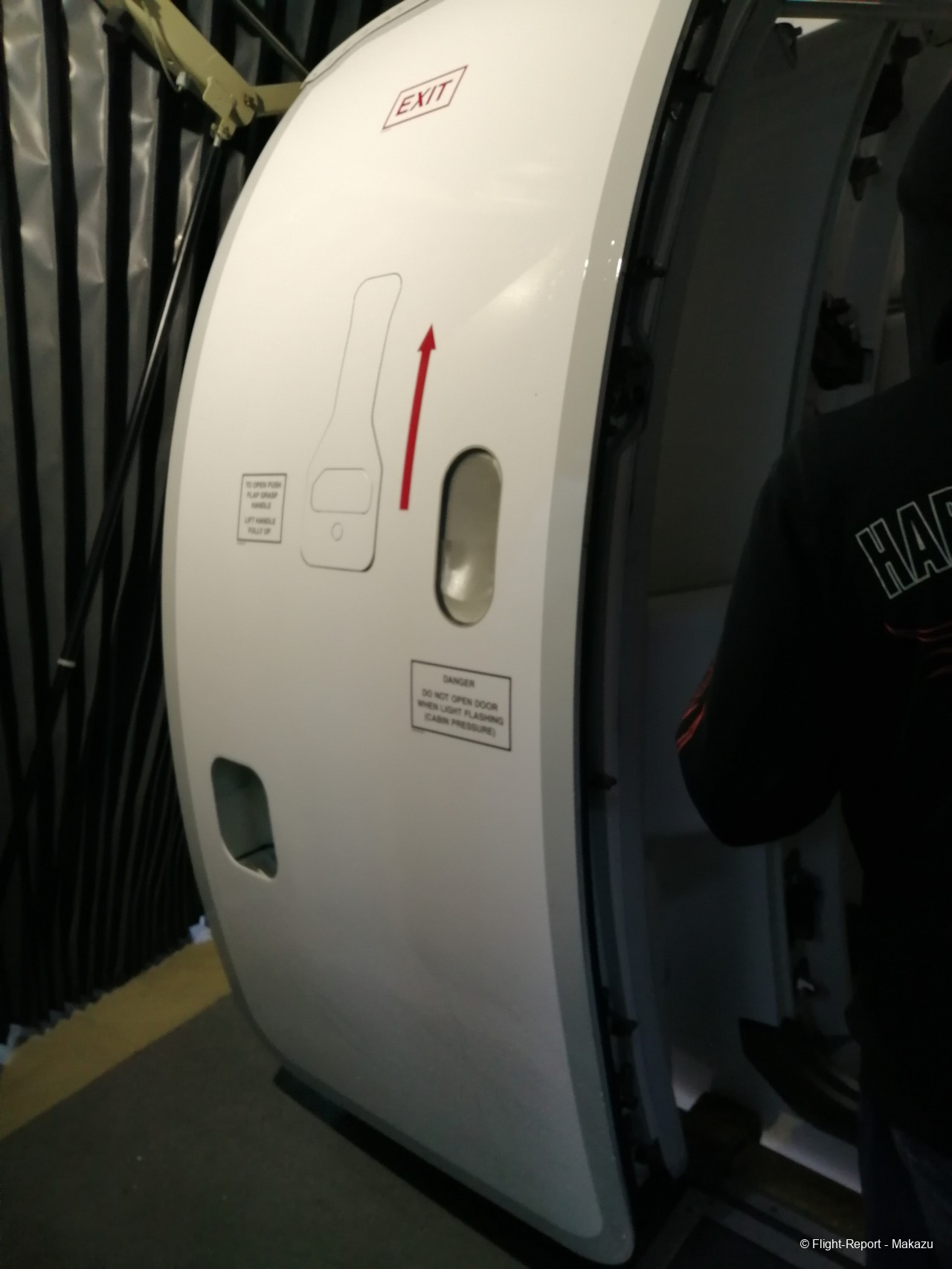 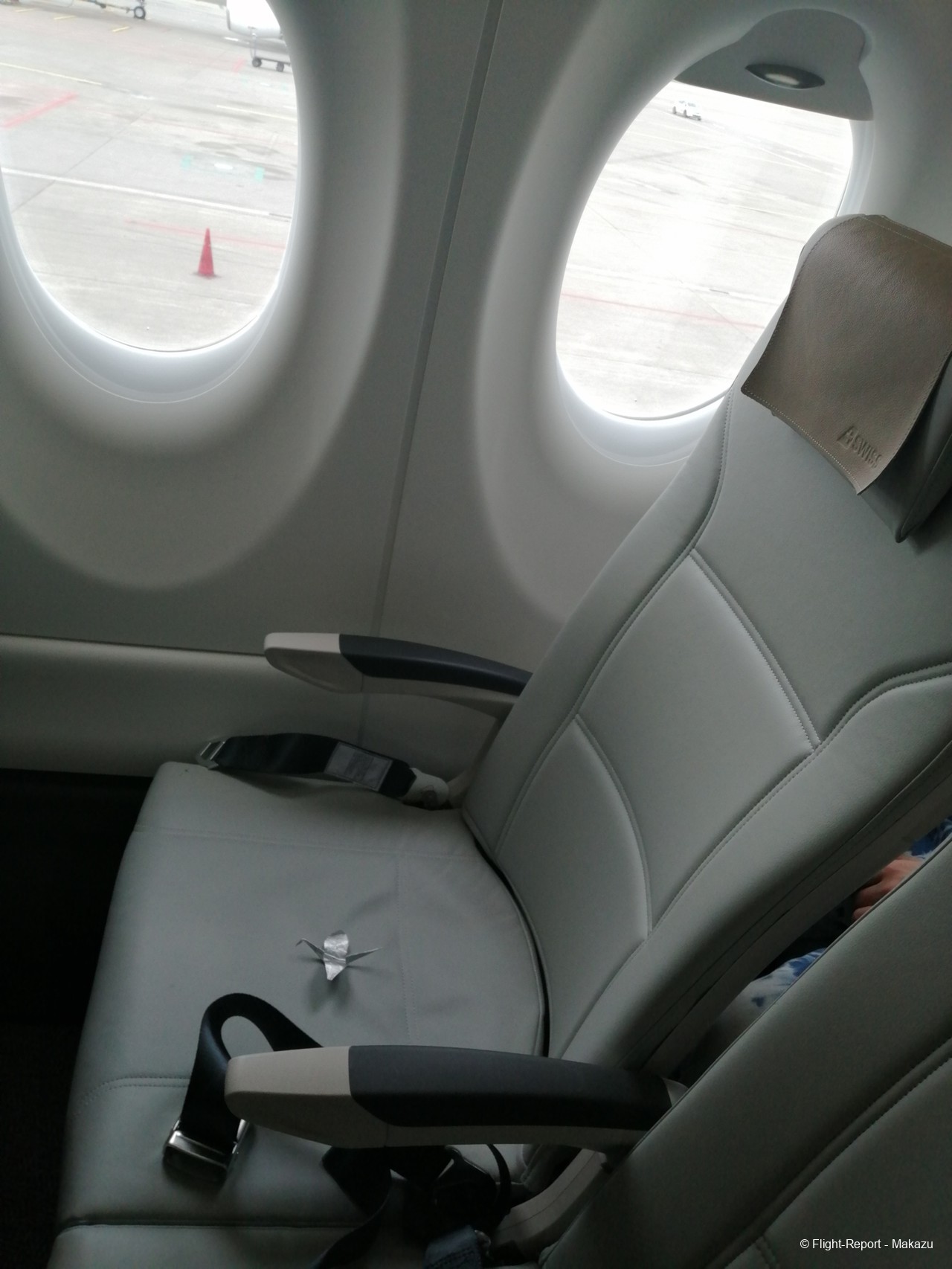 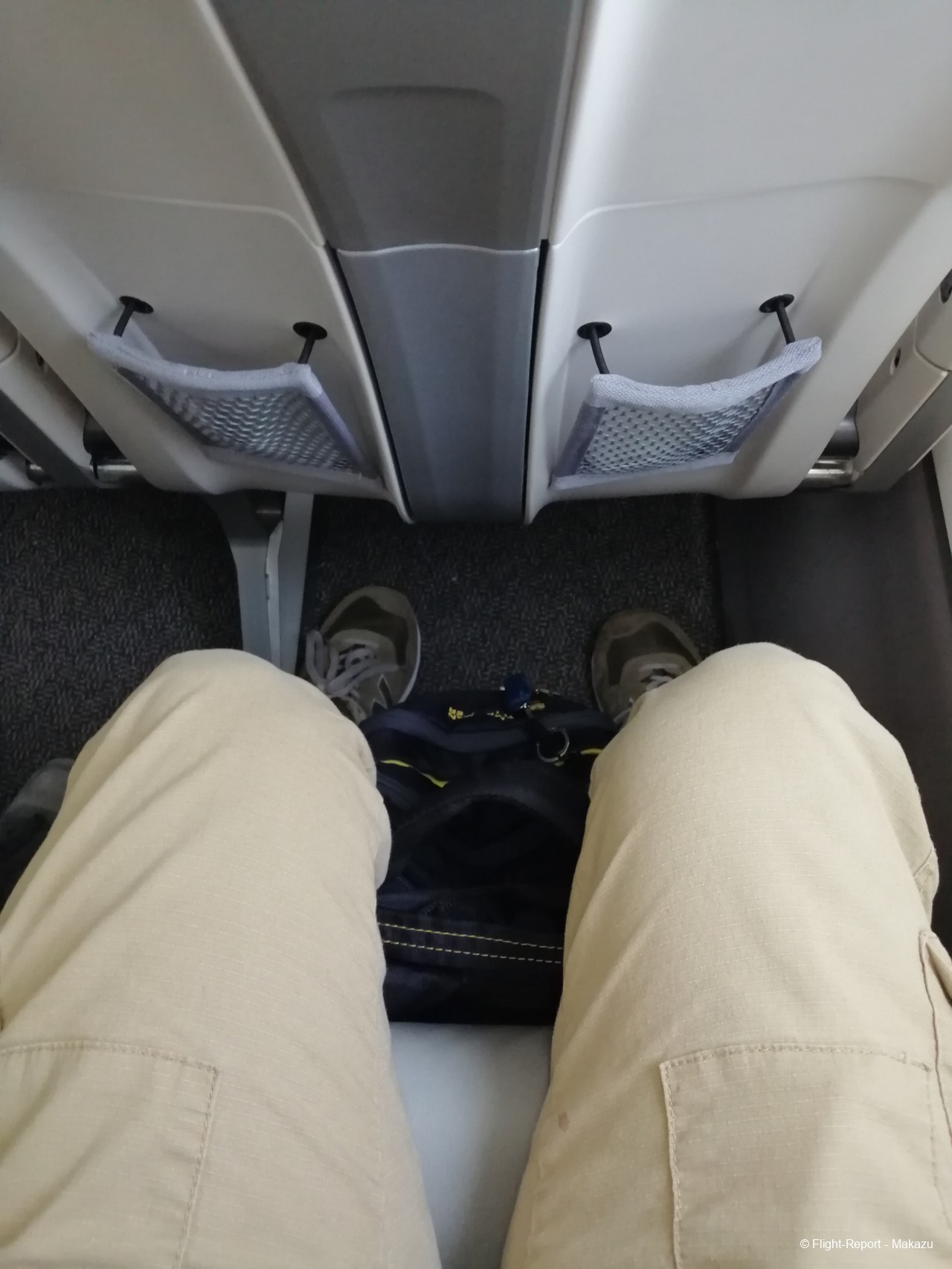 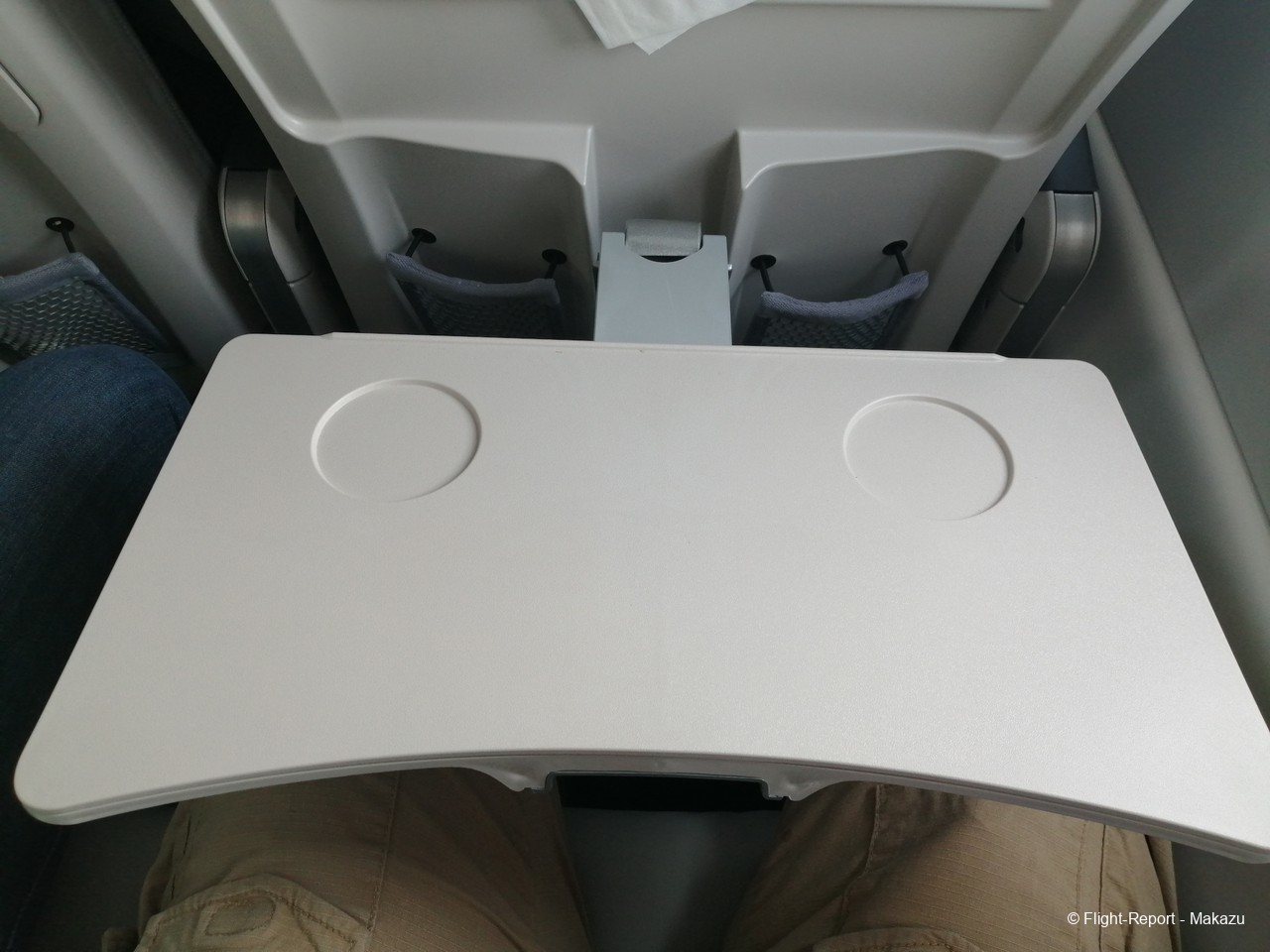 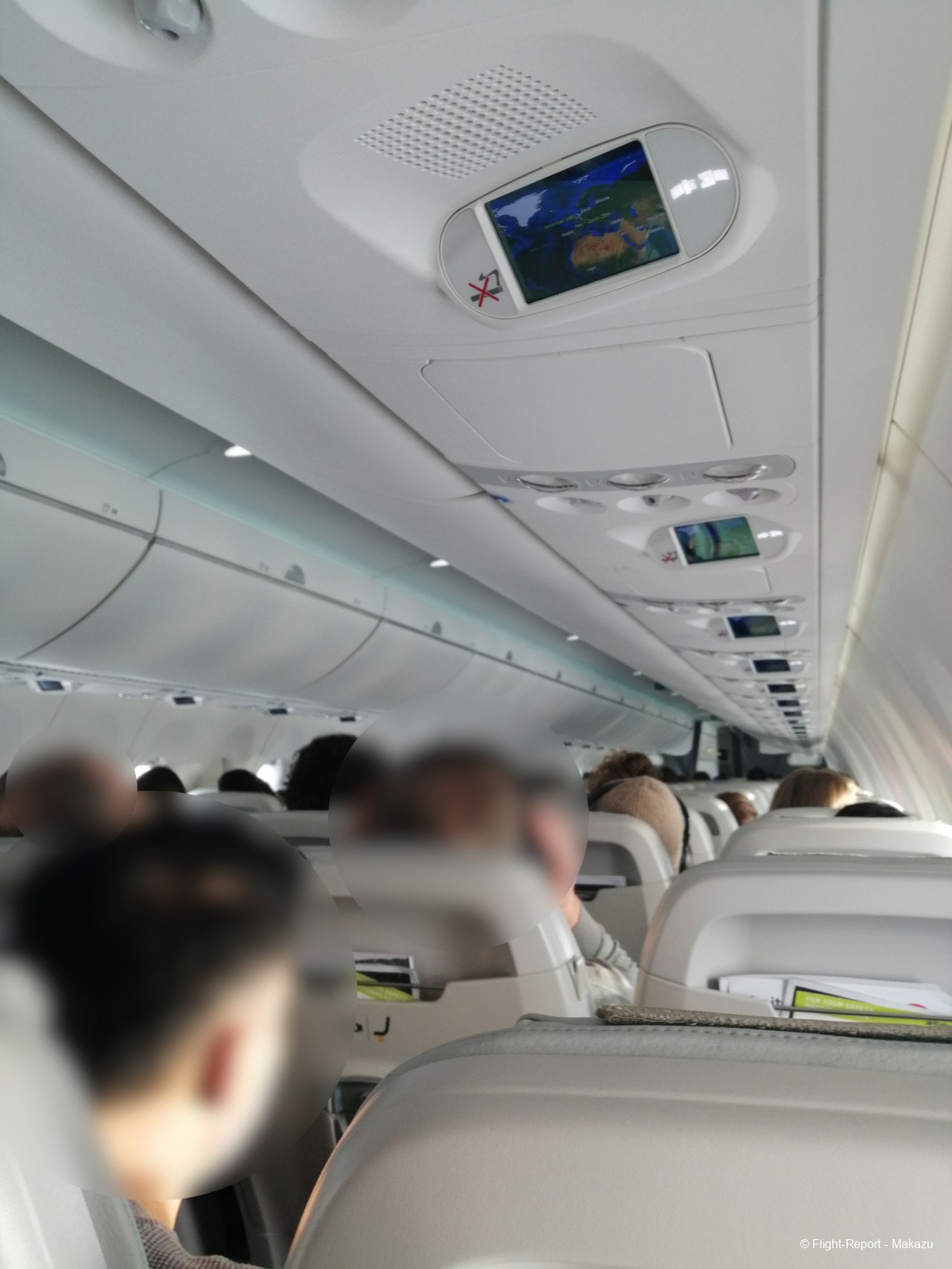 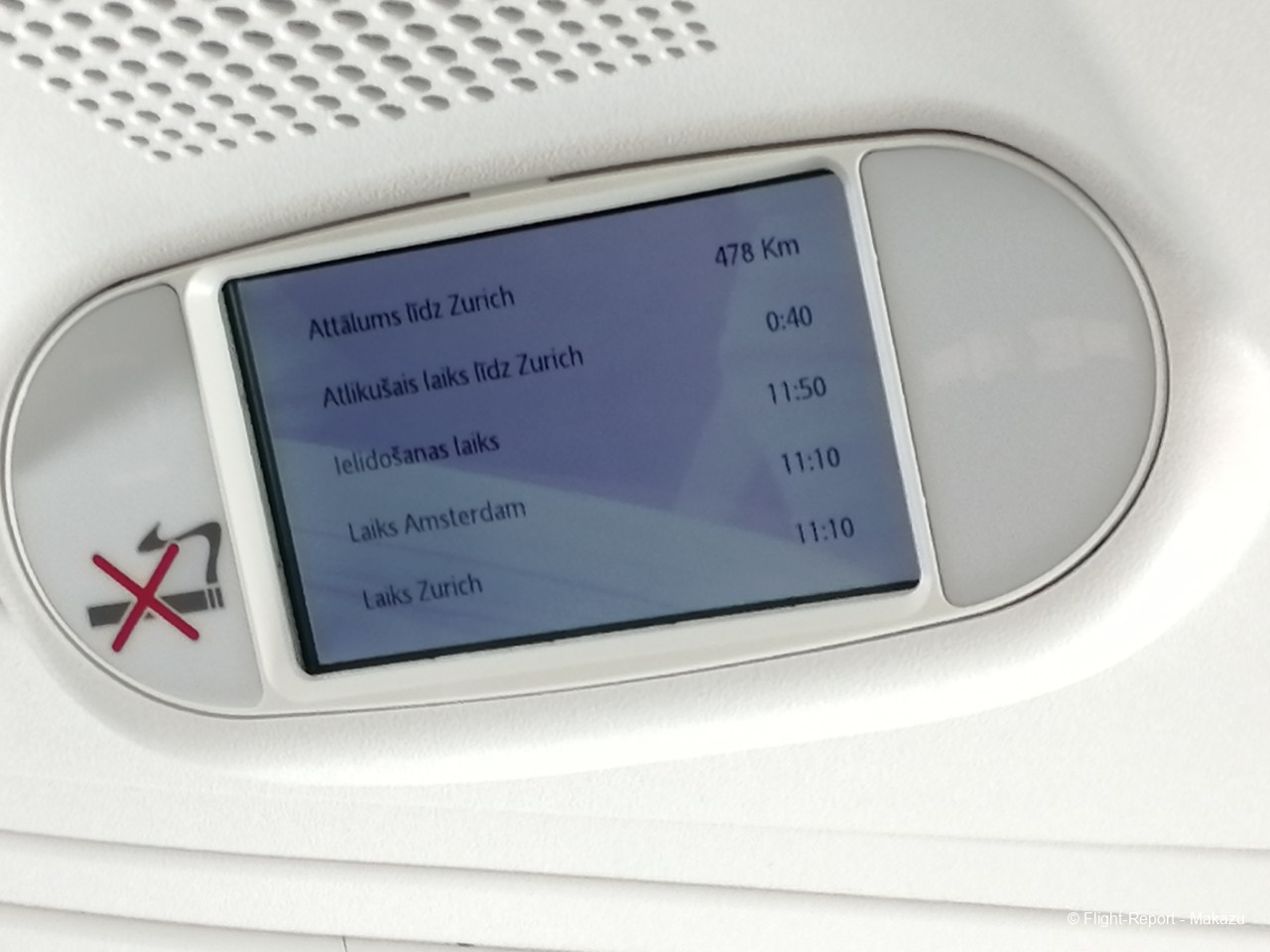 We push back at 10:28, almost 40 minutes late, surrounded by Air Baltic siblings. We taxi to runway 24 and take off quickly, which is possible thanks to the small aircraft and strong headwinds. 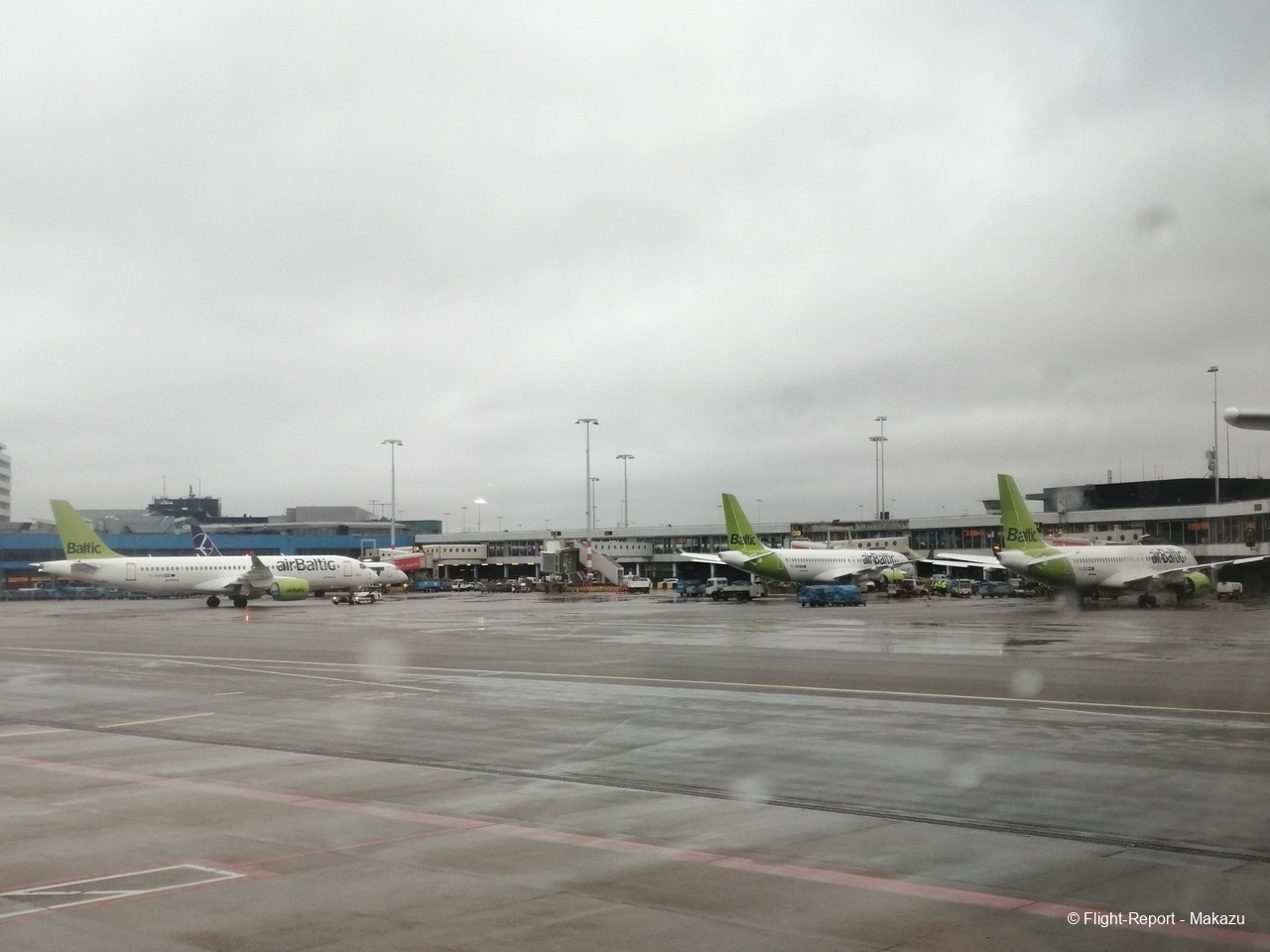 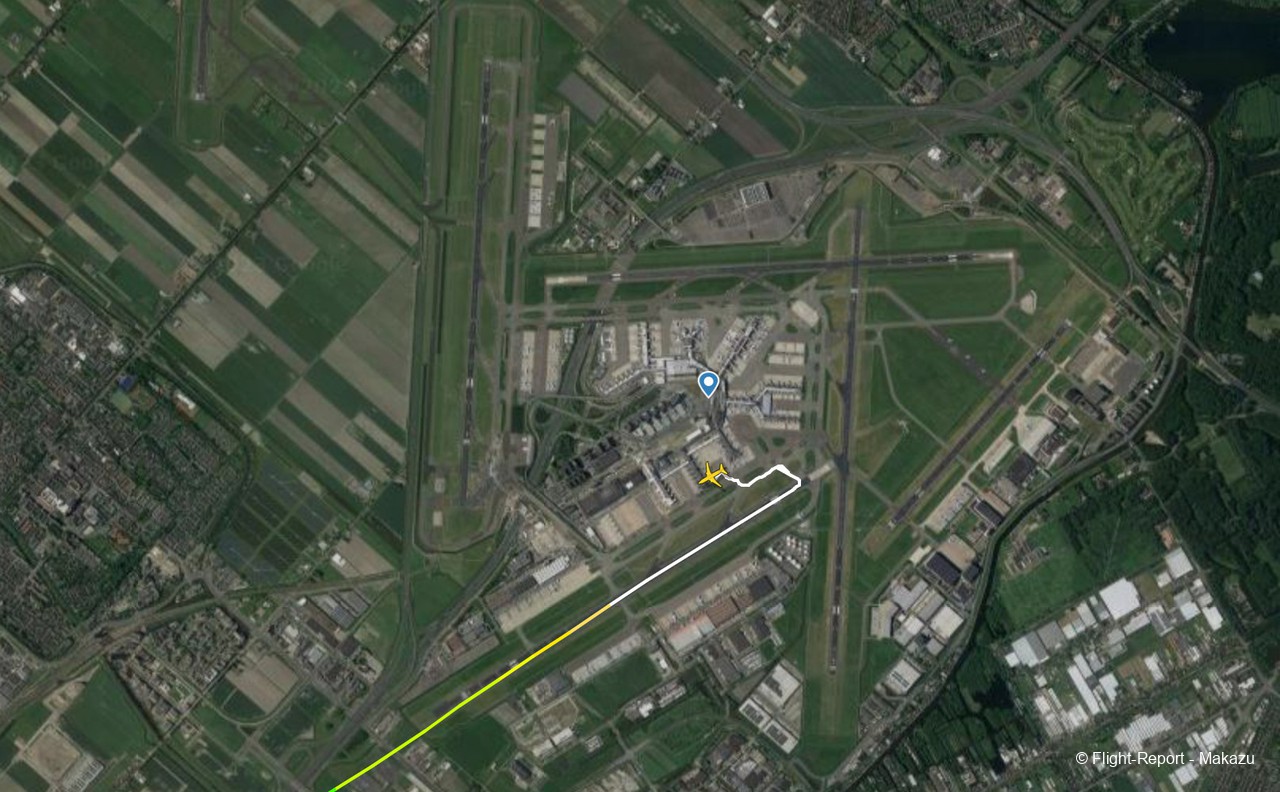 Service onboard was a bit disappointing. After an hour long delay and flying with a reputable airline, I would expect at least a snack or quick breakfast, but we're only provided with a bottle of water and the characteristic SWISS chocolate. The chocolate tastes like any other, but the water is surprisingly good. 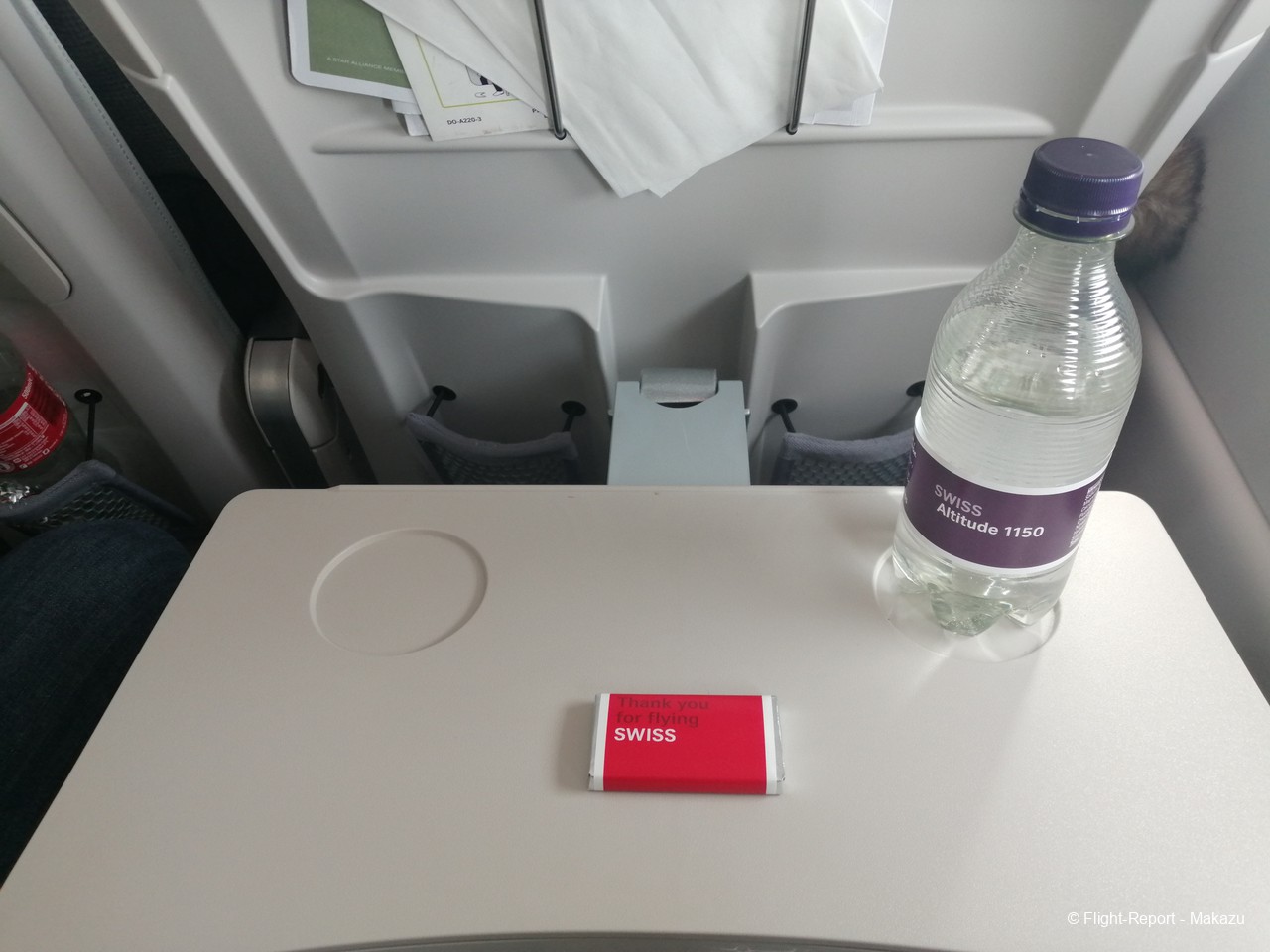 As we approach ZRH we break through the clouds and are greeted with Swiss hills and the Alps in the background. The flight has been uneventful with not much movement, but it seems we're arriving a bit earlier than announced after the delay. 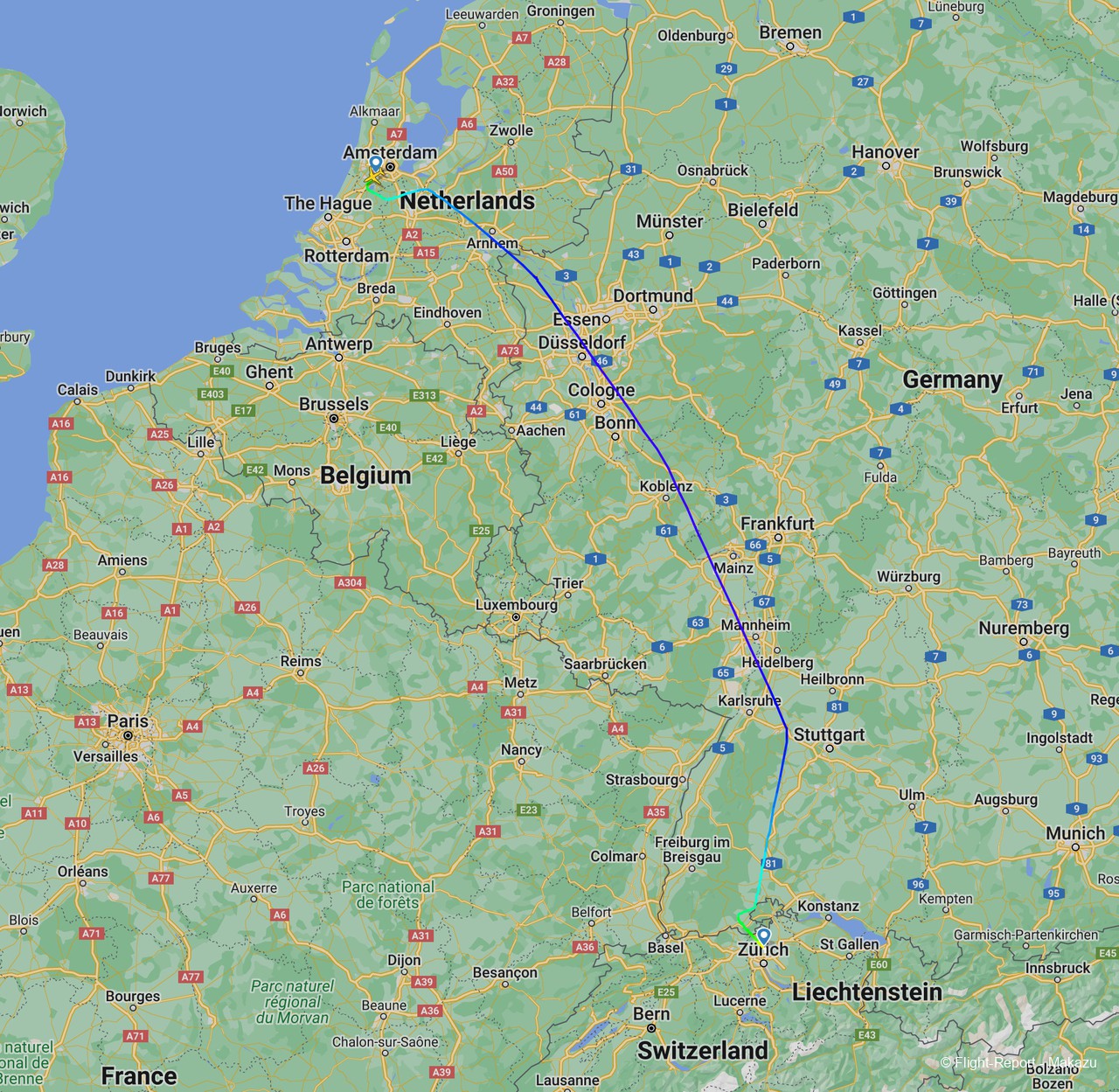 We touch down at 11:54 in […]. After a moderately long taxi, we arrive to our gate and everyone stands up, rushing to get their bags and run to their connecting flights. I stay to take a picture of my seat and another of a Chair airlines A320, but then join the runners heading towards the shuttle train to the E gates. 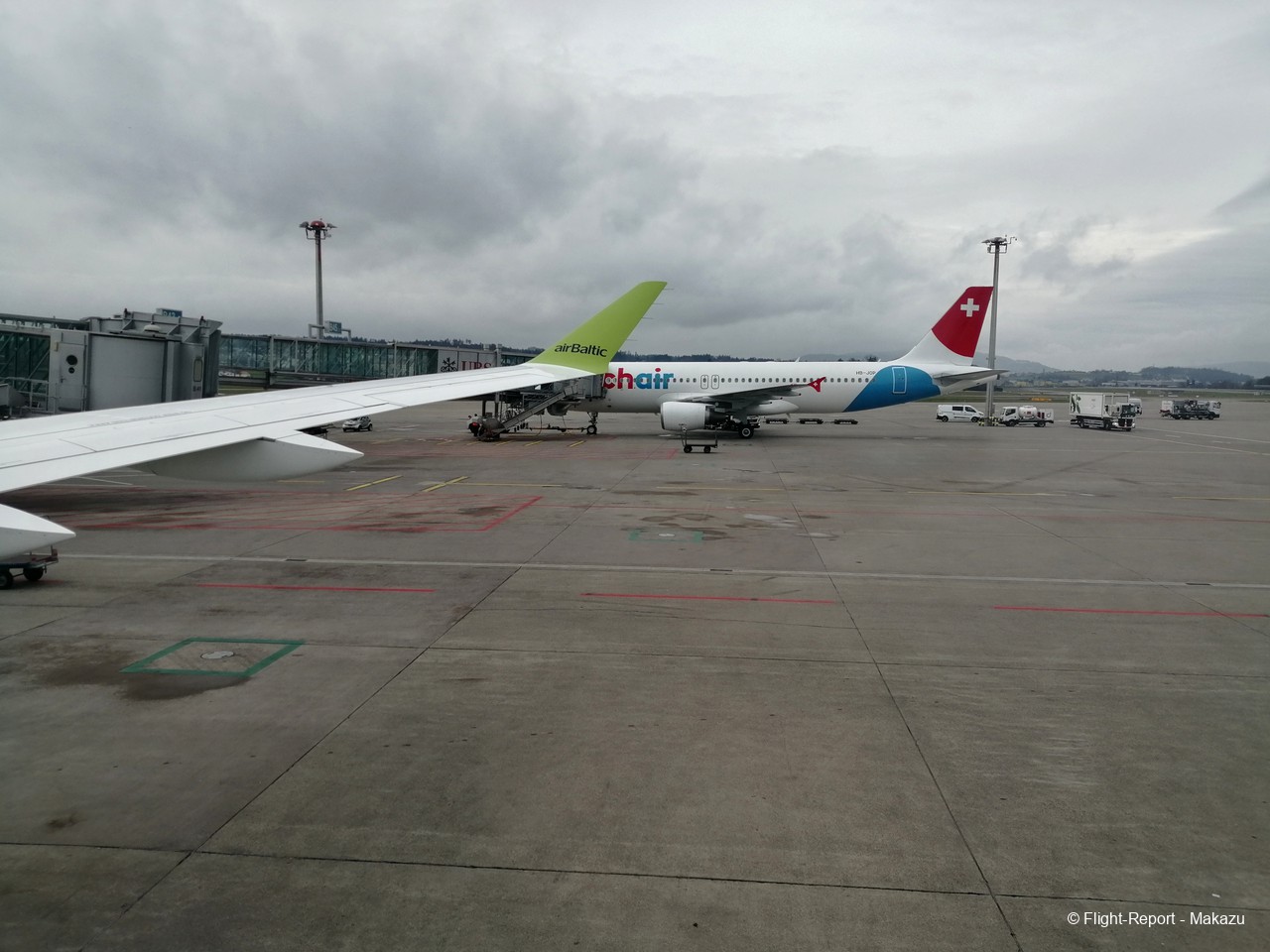 While the seats are comfortable, I would expect better service from a traditional airline. It was by no means bad, but it seems like they aren't even trying to compete with LCCs in short haul routes.

The delay was also an inconvenience, but since that is harder to control, it will not affect my rating unless I experience repeated delays with the same airline or airport.

AMS is a great airport with good connections and comfortable terminal, while ZRH does a great job at connections with a more compact size and fast terminal shuttle.

The contributors of Flight-Report published 10 reviews of 3 airlines on the route Amsterdam (AMS) → Zurich (ZRH).

He wrote 5 reviews about 5 airlines and 5 airports.