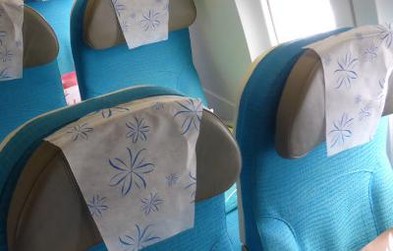 We live in Tahiti, French Polynesia, and we fly to France 1 or 2 times a year, with Air France via LAX. I’m tired to always fly with the same companie, the same plane, always transiting in LAX.

Here are the Flight Reports of my first round-the-world trip, with my family (2 adults and 1 child 3 years old), in Economy class.

For this last flight, and fly back to PPT from AKL, there is not so much choice. Only 2 airlines operate this route, Air Tahiti Nui (3 per week) and Air New Zealand (2 per week), with a code share on some flights between these 2 companies, and Qantas has a code share with Air Tahiti Nui.

We arrive from Singapore Sunday at noon, so the connection will be with a flight operated by Air Tahiti Nui and also marketed by Air New Zealand and Qantas.

To buy this one way ticket, I choose Air New Zealand for several reasons :
- This is the cheapest : NZ sells one way ticket half the price of return flights, and it would have cost 3.5 times more to buy the same ticket with TN !
- We have a *A Gold status (status match with Turkish Airlines) which should provide us some advantages
- I arrive with a Staralliance companie (Singapore) which should help for transit procedures (I thought… )

So here we are with a NZ ticket (NZ314) for this flight operated by TN (TN102) on a separate ticket of the TLS -FRA -SIN -AKL booked with SQ, because there is currently no possibility of such a routing in a single ticket.

At check-in of the previous flight in Singapore, the hostess confirmed what I feared : she can’t check in for the next flight (what about cooperation between Staralliance companies ?) but could label our luggage to PPT.

You can tell me that I could use online check in. But no! No OLCI with ATN, unlike ANZ, and ANZ do not provide OLCI for this flight because of the code share with ATN (crappy code share, act 1)

That’s why we were forced to make the whole process of entry in the NZ territory at the end of the previous flight, and we'll make all the check in and boarding procedure for this last flight .

We are landside 30 minutes after landing

The departure table shows flights of the day, our next flight is on time

A bit tired after a red eye flight, we headed to the Business check-in counter, proudly wearing my *A Gold card

The agent tells us that we have no right to this privilege because of the share code with ATN (crappy code share, act 2), but since we are here and no one is waiting behind us, she cares for us.

A new concern ahead, that I identified before the flight in the conditions of this particular share code, but I was hoping to get through the cracks. We have 4 checked-in bags (23 kg each) from SIN, well below our franchise of 130kg with SQ for this trip. For this last flight (ticket with ANZ), piece concept applies. We should be entitled to one bag per person (we are 3) plus 1 piece bonus for the 2 of us *A Gold. But no! Despite ANZ ticket, it is the conditions of the carrier ATN that apply to the letter ( crappy code share, act 3). We have one excess bag in these conditions, the check in hostess asks us to pay the fixed price in this situation : 70 NZD

But this is not done at the check in counter, I have to go to Air New Zealand’s sales counter a little further

I’m not alone here and it does not move quickly before me. I pay and I get my receipt .

Back to the check in counter where I must wait 5 minutes in front of the hostess over the phone, and finally get my boarding pass in exchange of payment receipt

Finally, we can redirect airside. Behind this door, passport control will be long before security checks

That's it, we are finally airside more than an hour after finishing the landing and entry procedures ! It took us over one hour and 30 minutes from the arrival of the last flight to make this transit procedure in tiring conditions, I thought I was in LAX ! The international transit procedure by the dedicated path takes 5 minutes in AKL normally (see the FR of my travels from Tahiti to Australia, for example, only in french at this time)

Note nonetheless that SQ and NZ just finalized a cooperation agreement on SIN AKL which should enter into force in late 2014, which should avoid this difficult transit in the future (even with a code share ATN ? I don’t know)

Now let’s go for a more enjoyable part of this report. The terminal of AKL is very pleasant with a large duty free area

And multiple views on the tarmac for a varied planespotting :
B772 Thai

A little further, my future bird, A343 ATN

This is Rangiroa, F-OSEA , that will allow me to present the new cabins of ATN (3 planes out of 5 refurbished)

A332 Fiji Airways (formerly Air Pacific ) : currently one of the finest livery in my opinion

B77W Singapore who brought me here and now returning home

I am surprised to see no Emirates aircraft during our visit, at a time when three A380 should arrive within 1 hour

We now want to have rest in Air New Zealand’s Lounge.

Will we be expelled because of this code share with ATN (crappy code share, act 4 ) ? I put my boarding pass under the scanner and a red light turns on. Ouch! I give my *A Gold card to the hostess, and we can go in . Phew!

I don’t think we had access to the lounge but our goalie did not care. Good for us

Here are some general views

TV corner with a rugby match

Finally, I found this vast area fairly quiet, the same level as may be the AF lounge 2E gates K or L for example. It means not unpleasant but not at what should be the flagship lounge of a companie of the highest level.

We go down to the gate at the scheduled boarding time. We will wait here 10 minutes before it will be called

Thanks to the presence of the kid ( and not because of my *A Gold card) we board first , leaving me plenty of time to make several pictures of this new economy class cabin

I notice immediately some poorly designed details :
On the 3 rows on the back of the plane, the attach to the floor of the seat in front is misplaced for my legs

View from my seat on the cabin during boarding

In the Air Tahiti Nui’s magazine (Revatahiti), the network map : ATN dessert Paris, Los Angeles, Auckland, Tokyo. Code share with AA to 17 U.S. cities, and with Qantas to Sydney, Melbourne, Brisbane. After this flight a new code share with Korean to Seoul via NRT has been added.

As I could not make you discover new Business cabin, I only offers the description made in the magazine

The blanket is turquoise blue fleece, very soft to touch

We push back shortly before the scheduled departure time, but taxiing is very short and we take off at 4:00 pm local time

I explore the IFE :
3 choices of language : French , English and Japanese with respect to the destinations served by ATN

Commands are placed via the ? button, top right. The screen is tactile

Choice of movies : the weak point of this new IFE, only 14 choices. Once removed cartoons and movies that you don’t like, there is a risk of getting bored for a company that offers 24 hours flights like CDG LAX PPT !

I watch The Prestige.

Quiet cabin during the beginning of the flight

You can guess that the hostesses are also very beautiful, making the myth of vahine alive. I do not have the right to show a non-blurred picture (which would ruin everything), but a public photo in Revatahiti magazine, it’s allowed !

It’s time to lunch, less than 1 hour after takeoff. No paper menu distribution, everything is on IFE

Meal with 2 choices of hot dish (beef) or fish (hoki)

I choose the sparkling wine in small individual bottle

The screw cap looks like a false champagne cork

Poor quality for this sparkling wine, I prefer the real Champagne (despite a plastic glass) with Air France

Here is the tray

As a starter, couscous salad and chicken is good

Full stomach, it is nap time. The kid finds his favorite place, and it '"/>

The viewing angle of the screen is not restricted, to avoid disturbing the neighbors as in Singapore Airlines (see my PREVIOUS FR)

Quiet and sleepy cabin for the end of the flight

This is time to fill out the immigration forms

Novelty since a few months to PPT, it is this small duty free shop in the carousels area

This is the end of this journey, we are outside the airport 40 minutes after landing


Long and tiring journey throughout Asia anyway. Make this kind of journey without stop over and in economy class throughout Asia would be too tiring. A remake ? Yes I want, but not every trip to France.
"/>
" />
" class="image-report-bloc" alt="image" >
See more

Air Tahiti Nui
My rating concerns ATN, and unfortunately can not concern Air New Zealand that issued the ticket, for this code share giving no benefit to passengers despite a Staralliance status.
The new economy cabin is successful on the whole, a great visual. Comfort is OK but I regret a 90° position of the seat that I feel uncomfortable, but it is very nice when reclined and not bothered by the front seat when it tilts
Smiling and pleasant crew.
Catering is average of what I know of ATN, good enough but no extraordinary. After a flight with Singapore, ATN still suffers from the comparison.
IFE is good with a beautiful image, a touchscreen responding well, and finally the VOD that was sorely lacking before the retrofit. What a pity of having savings on the choice of films, really too small , it's cheap

In the end I found the successful retrofit economy class, with some caveats on some details or small choice of movies on the IFE

Air New Zealand Koru Lounge, International Terminal
I have not had the time and the courage to explore it in detail, but food was correct but below what I expected while we were at lunch time. The setting is nice and spacious, not overcrowded at that time. ANZ should do better for the flagship lounge of its hub.

AKL airport
This airport is usually very nice for quick transits. But this time it was not the case with a painful procedure for check in and controls. Because of the lack of agreement between Singapore and Air New Zealand / Air Tahiti Nui. But ultimately the image of the airport suffers. What a pity because apart from that, I find it very pleasant

PPT airport
The airport remains functional for landing but not pretty, would need a facelift

The contributors of Flight-Report published 14 reviews of 2 airlines on the route Auckland (AKL) → Papeete (PPT).

The average flight time is 5 hours and 22 minutes.