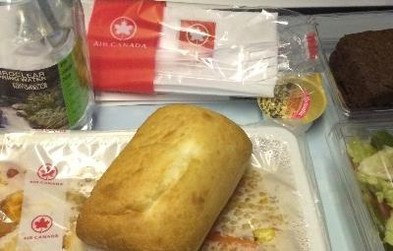 #18 out of 74 Airlines A minimum of 10 flight-reports within the past two years is required to appear in the rankings. 345 reviews

This is my first flight report so please provide some feedback in the comments section. After two years living in Toronto, Canada on a working visa the time had come for me to return home to Australia. Instead of taking the usual route via Vancouver then onto Australia with AC, or through the US with AA and QF via LAX, I decided to go the opposite way round. My open jaw ticket was with Singapore Airlines and would see me fly: AC848 from YYZ to LHR; SQ319 LHR to SIN; and finally SQ227 SIN to MEL.

This flight report is for the first sector on AC848, or as it was ticketed to me, codeshare flight SQ1027. Please stay tuned for the following two reports.

I arrived at Toronto Pearson International Airport with plenty of time to spare and proceeded right to check-in where I used the self service machine to print my boarding pass and baggage tags. One of the benefits of my open jaw flight with SQ was that I was permitted two pieces of baggage each weighing 23kg. This is SQ's baggage rule for flights from North America and as my flight commenced here this fare rule carried over to my subsequent sectors despite standing baggage rules differing. I think my fare type was a little unusual, as when I took my two bags to the drop off counter the agent added two priority tags. I do not hold any type of status. After a hassle free check-in I proceeded through security. The airport was very busy with families, most of which I imagined were heading to Europe for a summer vacation. I had some time to stroll around air side and take in the terminal. A sculpture in the centre of the terminal. There was free use of iPads on tables throughout. You could order food and drinks from the nearby cafes/restaurants. 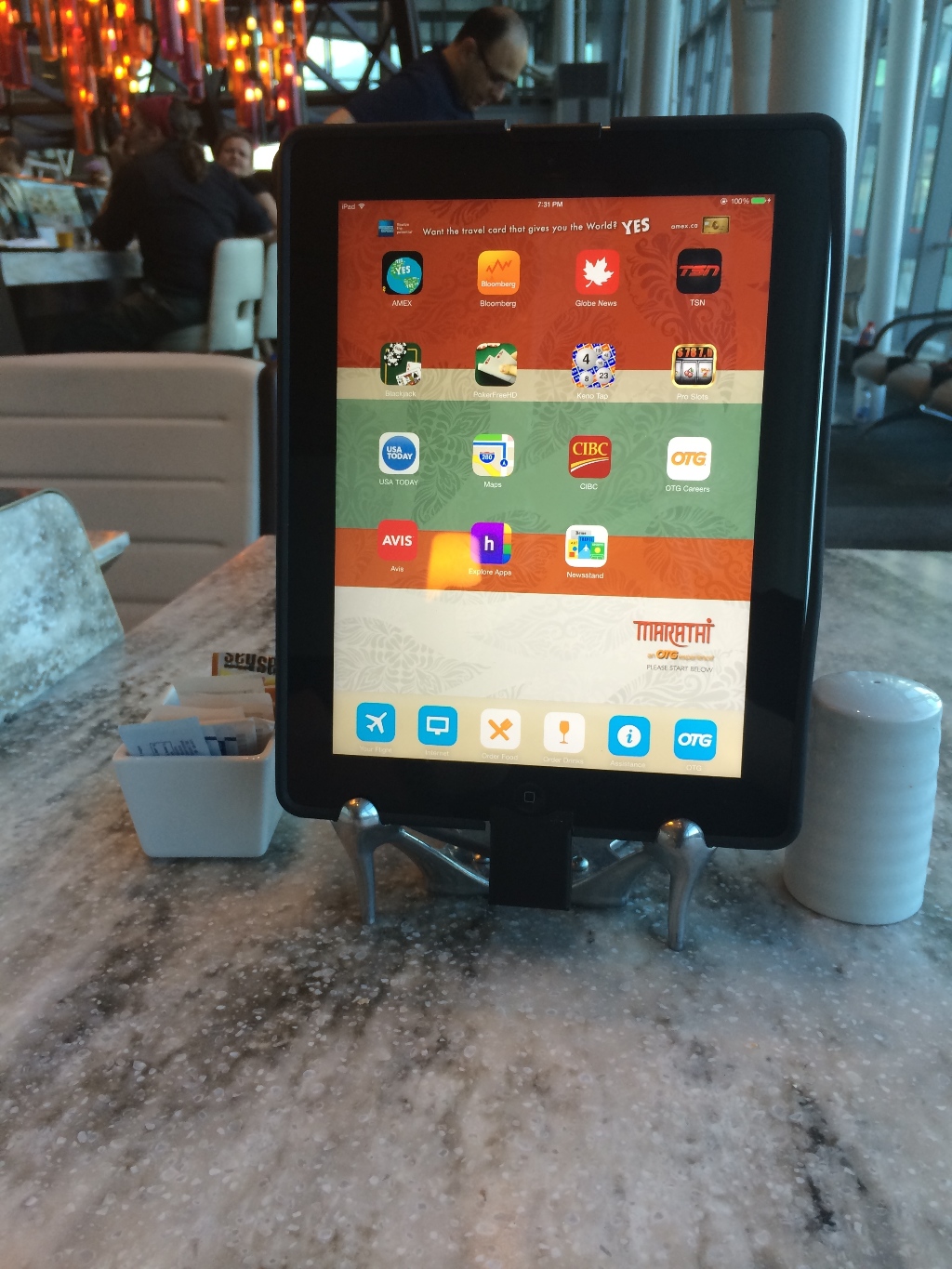 A little bit of plane spotting. There actually were't a lot of planes about. I had a feeling my flight would be full and when I swung by the gate people were already lined up. They were blocking any one else from passing by which was, I suspect, particularly annoying for those at the accompanying gate that had a flight to Mexico City.

Our gate agent continually came over the PA, before boarding had even commenced, to tell people to stop queuing and that no one would be getting there any faster. When boarding did commence, it followed the usual protocols. My seat for the next five or so hours 62A. These seats are AC's older B777 seating and as such are rather roomy unlike the new 3-4-3 configuration on the new B777s. I was in the second last row where due to the nature of the curvature of the plane the seating is 2-3-2 (not 3-3-3). I'd chosen this seat as I don't mind being up the back and being able to see that's going on in the cabin and also because secretly I'd hoped no one would sit next to me. This was not the case.

(At this point my iPhone accidentally switched to some filter, so excuse the filter.) 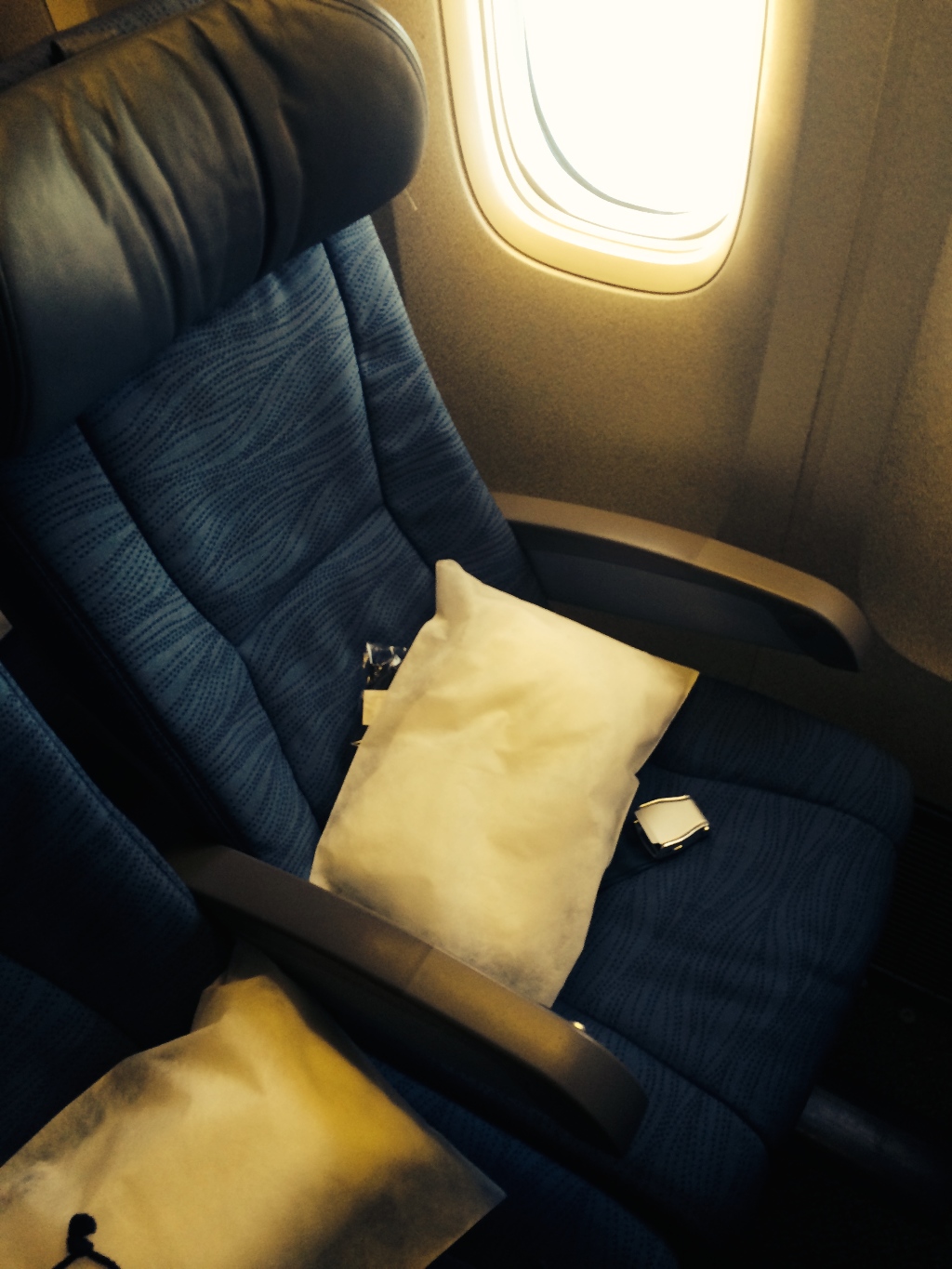 On the seat there was a pillow and blanket of rather poor quality, but I guess we're in economy. 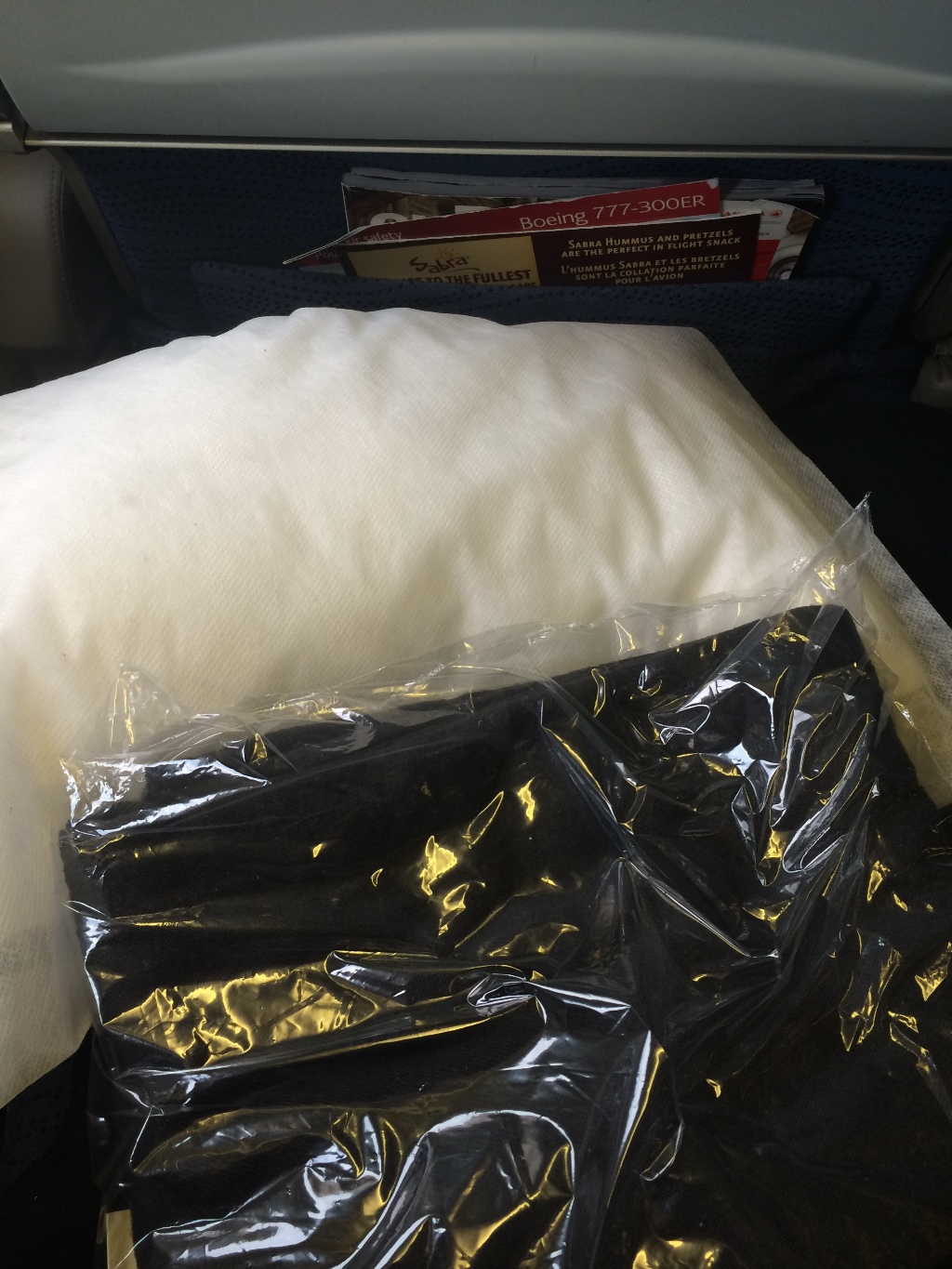 The PTV was showing its age in both size and technology. It was touch operated, but lagged a lot. Overall the aircraft was a bit dirty and tatty. I noticed later that there was chewing gum stuck behind the headrest diagonal to me. 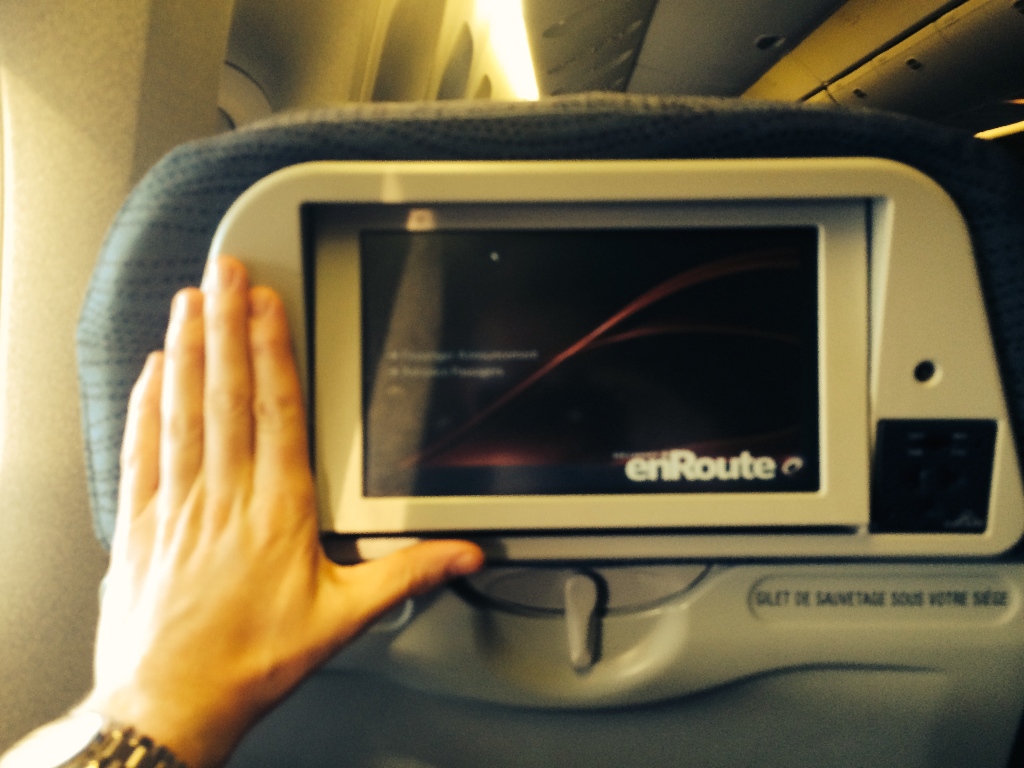 Take off was at at 9.05pm. Here are a few photos from the tarmac and take off. Service began immediately with the distribution of headphones. This was followed by dinner service. No menus were distributed with the FA informing each row of the available two choices: chicken or tomato pasta. I went for the chicken which was served with a gravy of sorts, and vegetables mixed with pearl couscous. This was accompanied by a warm bread roll with butter, a bean and cabbage salad, a chocolate brownie and a bottle of water. I also went for some white wine. The food wasn't bad as such, but it was nothing special and I still felt hungry at the end. The serving sized weren't the biggest and notably there was no cheese and crackers (or the like). The brownie was dry and really not enjoyable, however I did like my hot roll! 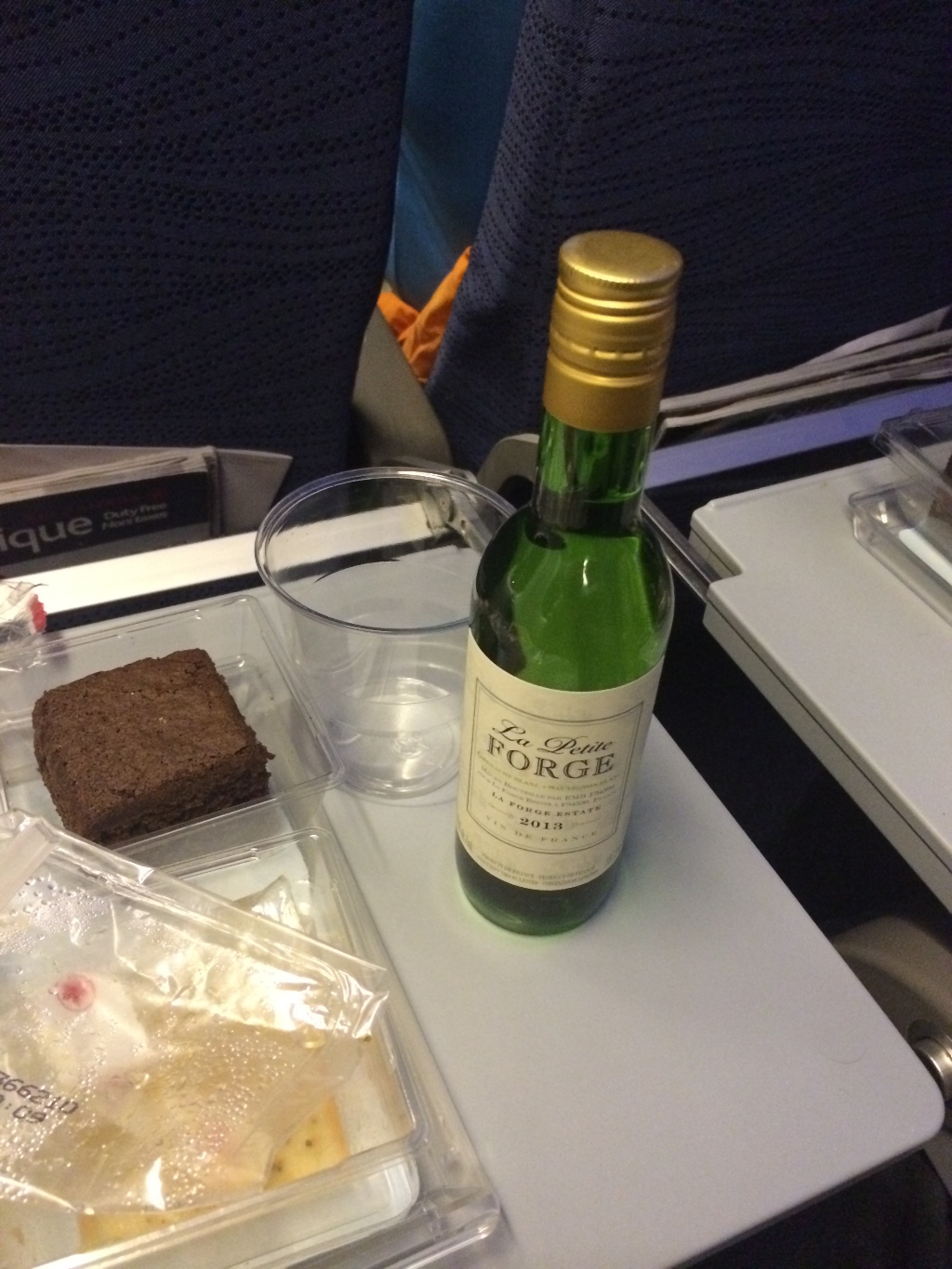 After dinner I watched a movie and settled in for a short sleep. When I woke the cabin lights were in full mood lighting effect. I really do enjoy this feature on planes, it really makes for a much more relaxing mood than the bright intrusive fluro lights. It was a few hours out from landing and breakfast service began. I say breakfast because all it consisted of was a slice of packaged banana bread. I wasn't particularly hungry, but it would have been nice to have something like fruit or yogurt to accompany this stodgy item. Landing was on time and we pulled up to the brand new Terminal 2 at London Heathrow. As this was still during the introductory phase of T2, there were few airlines using the terminal. This meant an easy breeze through immigration. It was also nice to find my bags among the first out on the carousel with those priority tags. Overall AC848 was an okay flight, just that. The flight arrived on time, the crew were friendly and efficient and catering was passable. Cabin comfort was rated high as I found the seating spacious and comfortable, however wear and tear is beginning to show. In terms of IFE, AC's system lags a lot when in use and lacks a wide selection of material. I've flown AC in the past and will continue to rate them the best North American airline, even if they do lack a five-star service.

The contributors of Flight-Report published 13 reviews of 3 airlines on the route Toronto (YYZ) → London (LHR).