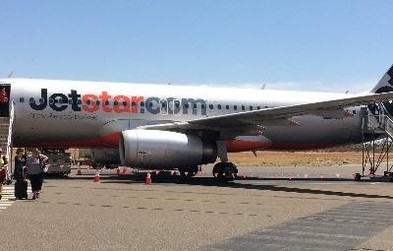 Once again I'll uploading the other FR as I get time to write them.

This flight was the continuation of my flight from Singapore (previous FR), and theoretically we should have been on transit. We quite weren't. Because our flight was operated by Jetstar, we had to pick up our luggage at the conveyor belt, check-it back in at the Jetstar counter and proceed to the gates, through immigration and security. So despite having more than 2 hours of transit, we ended up swallowing our breakfast in a rush. Being a LCC flight, there isn't much to say about the flight itself, since there's pretty much no service at all, so this FR will be a fairly shot one.
Back to the report.

Upon arriving from Singapore, we glimpsed at the TV screens searching for our flight. 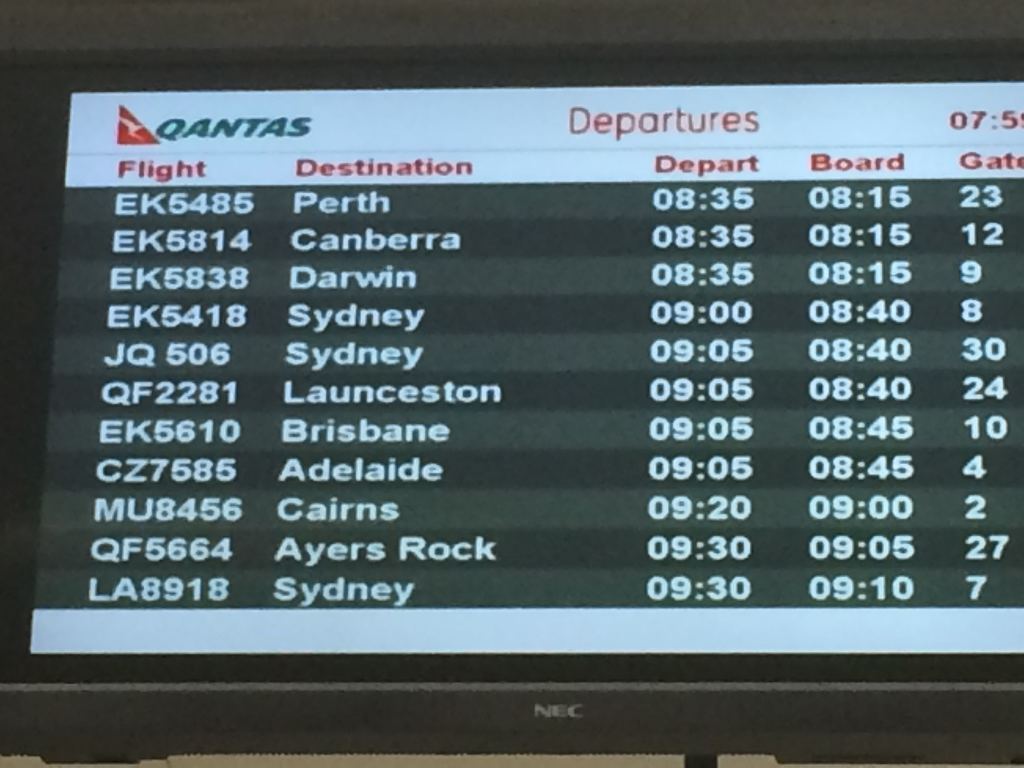 Because we were transferring from an international flight, we had to walk to the domestic terminal.

We had to walk to the domestic terminal to check our luggage back in: 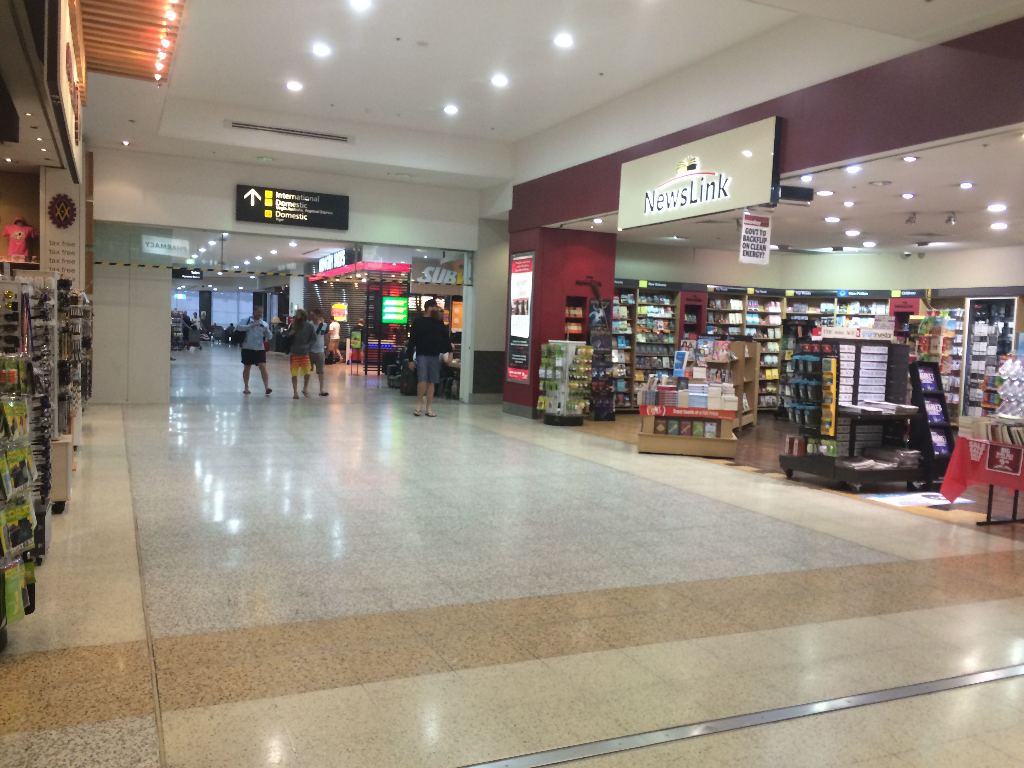 At Melbourne Airport, Jetstar uses self-check in kiosks: just enter your name or booking reference, and it prints out your boarding passes and luggage tags.
You then proceed to the bag drop off. So despite the queue being quite long, it doesn't take much time to get through.

Although it looks quite cramped, the Jetstar counter was pretty efficient: 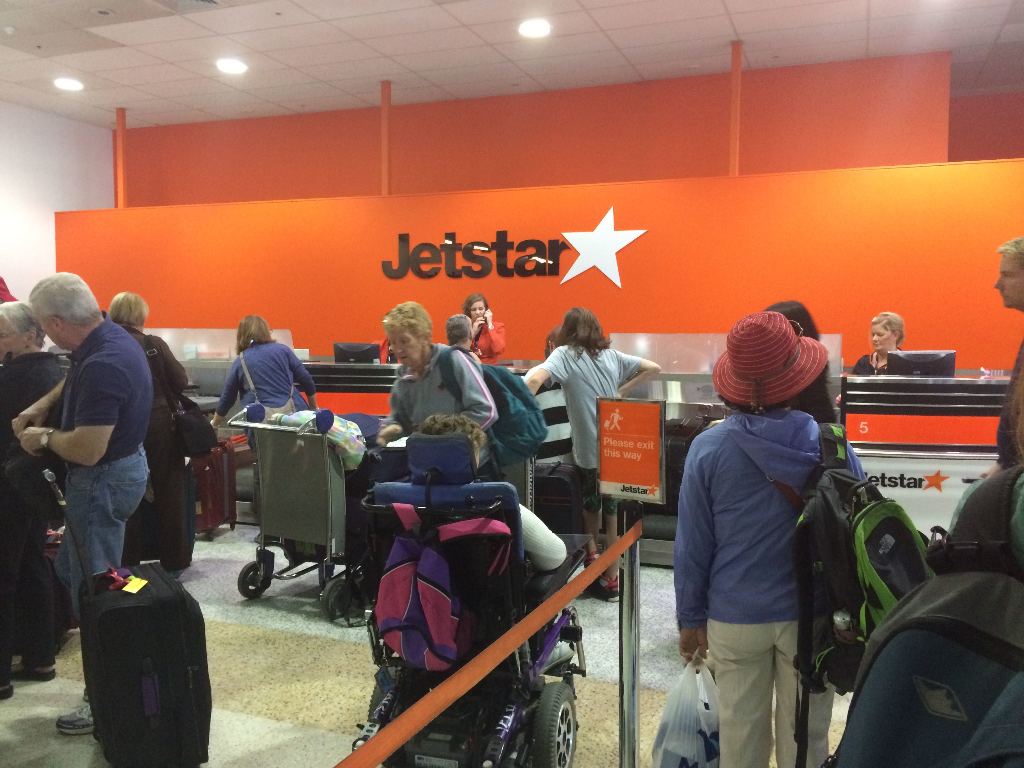 We had a quick breakfast while watching airplanes come and go.

This part of the domestic terminal looks like Qantas' land: 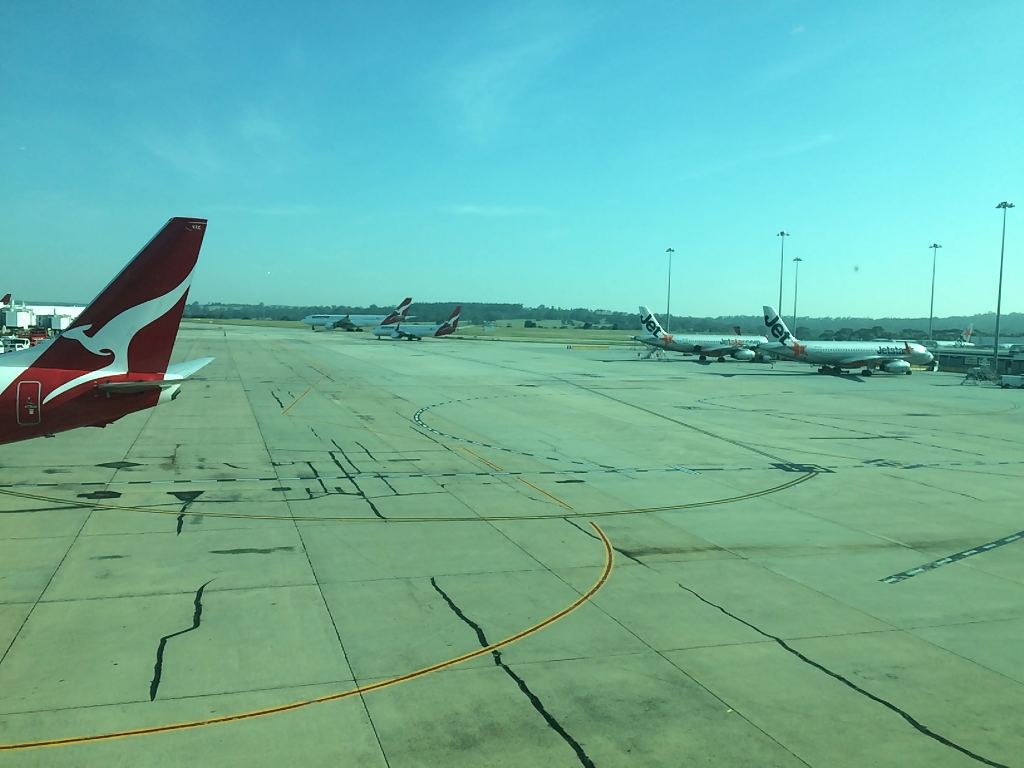 We then proceeded to gate 27, took the stairs to end up on the tarmac, walking to our aircraft.
I managed to snap a few pictures, though for that I was reprimanded by some Jetstar ground staff. 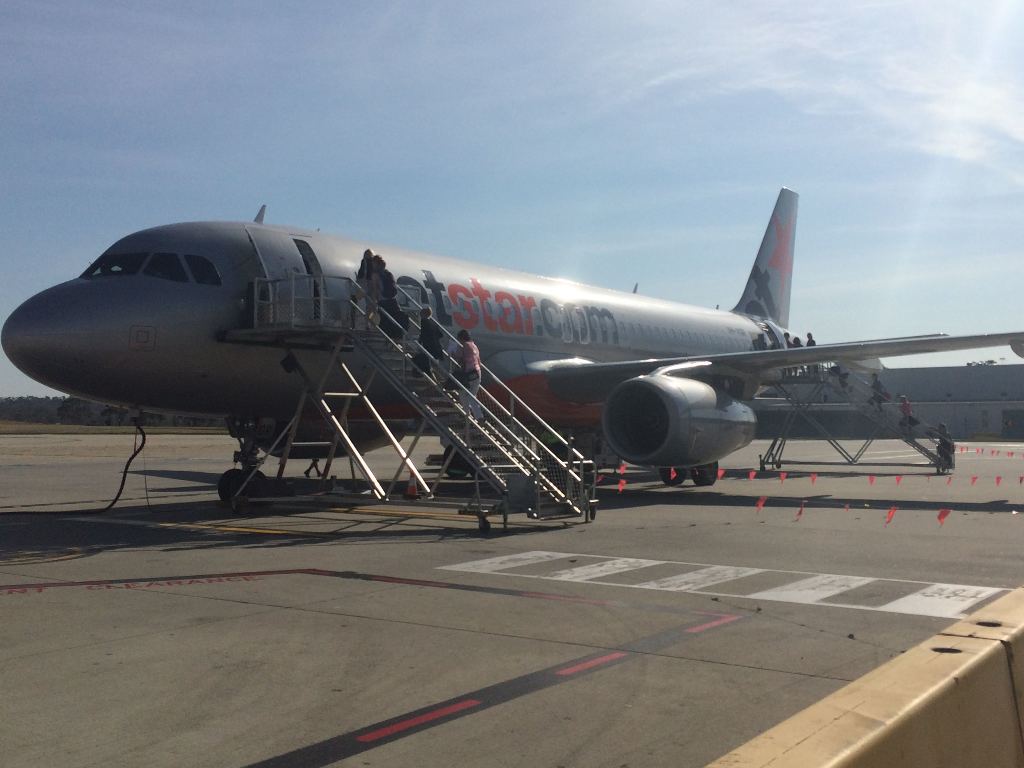 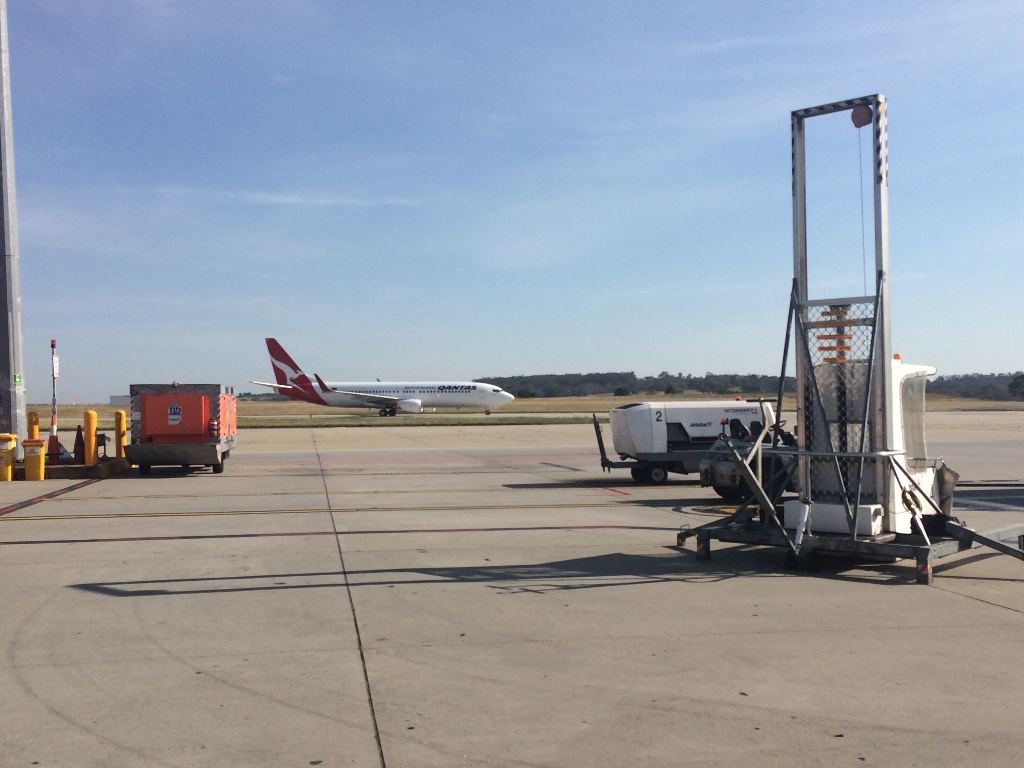 While my boarding pass attributed me seat 17B, I swapped with my brother to get the window seat. 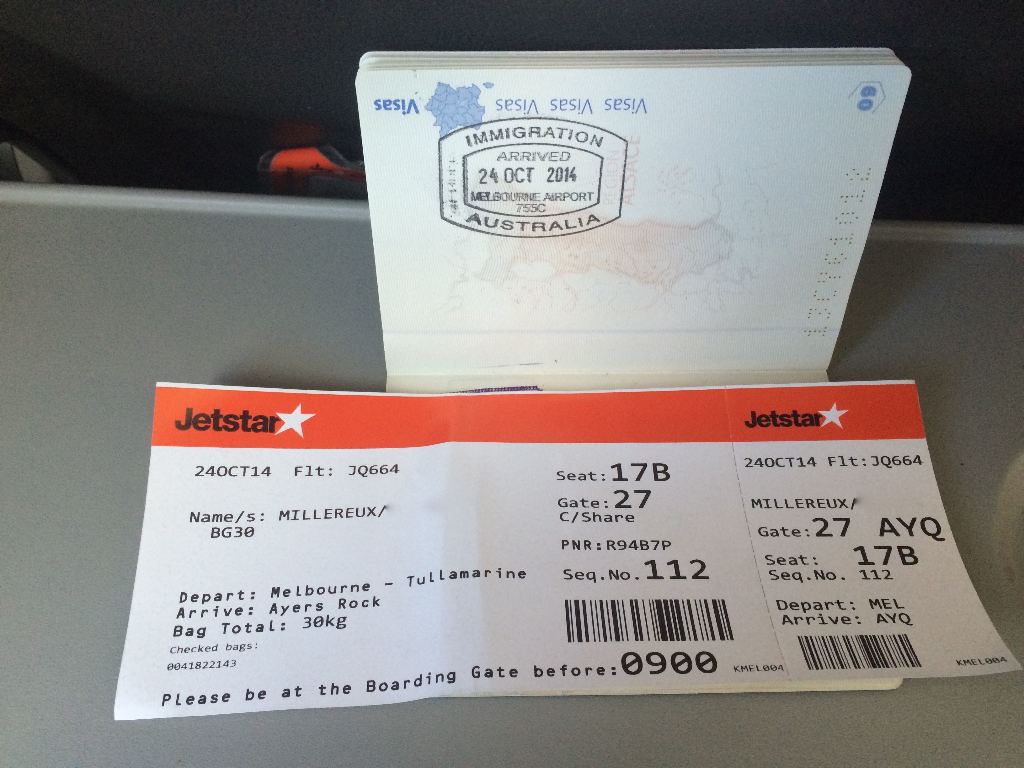 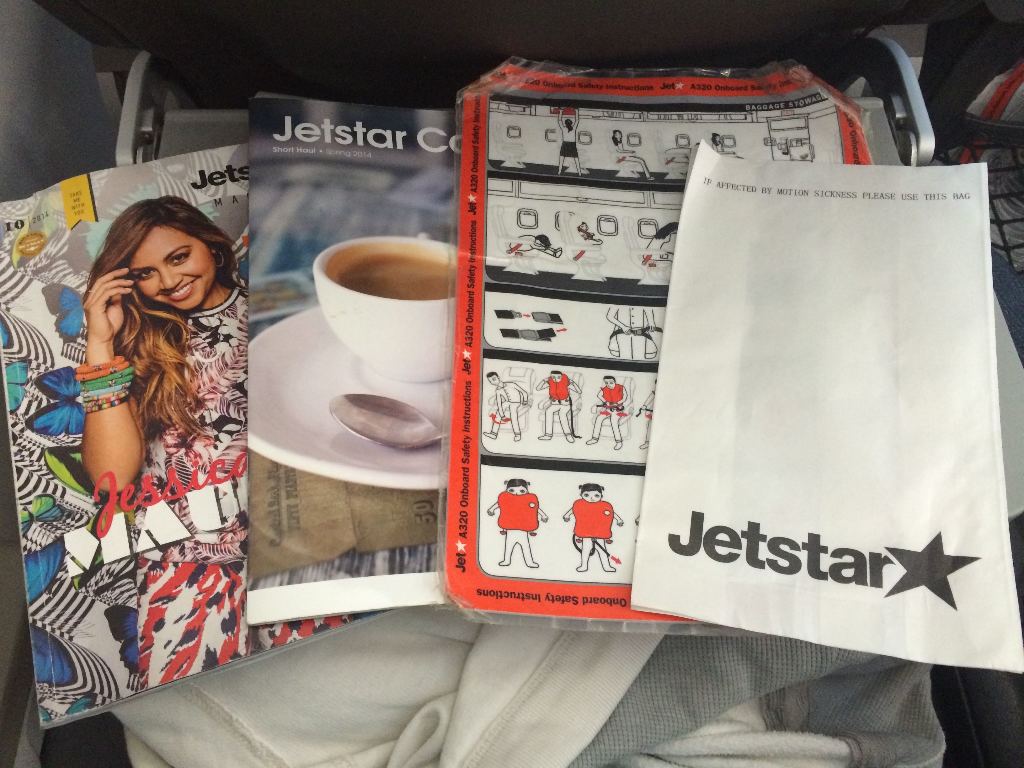 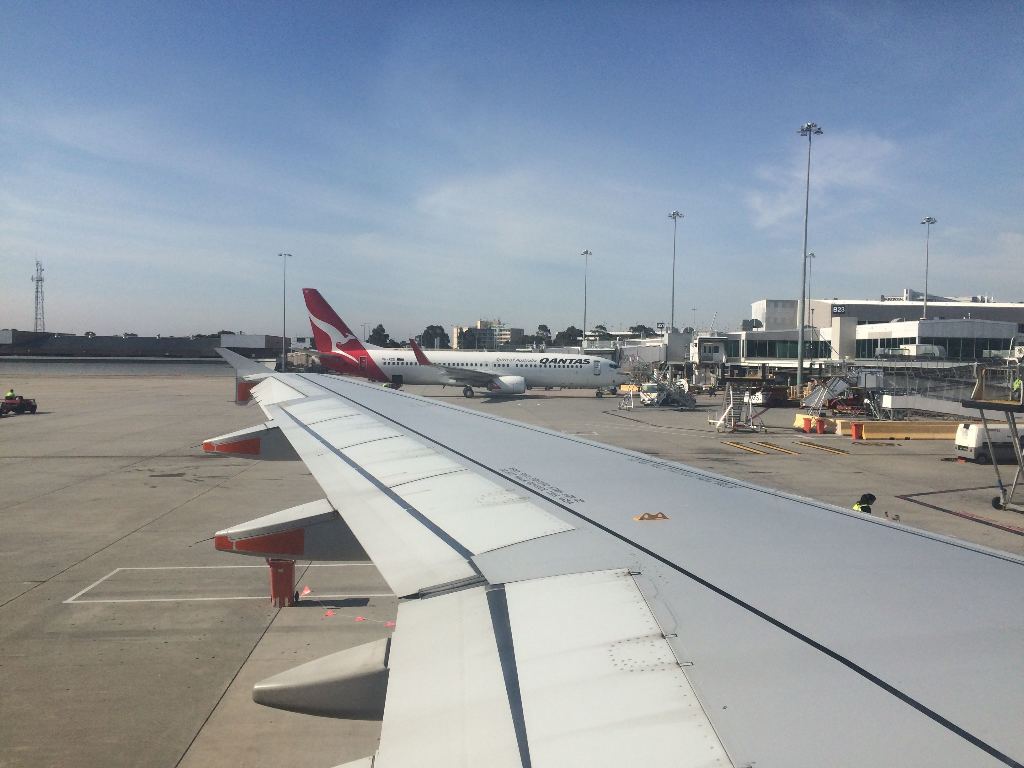 Now, what to say about the pitch. I am not tall, around 176cm. But hell did it feel tight. I could barely fit in there. It actually felt much tighter than I had previously experienced on Jetstar Asia, despite being the same aircraft. Yes the leather is quite nice, but i would rather have some fabric seat with a respectable legroom than this appalling pitch. 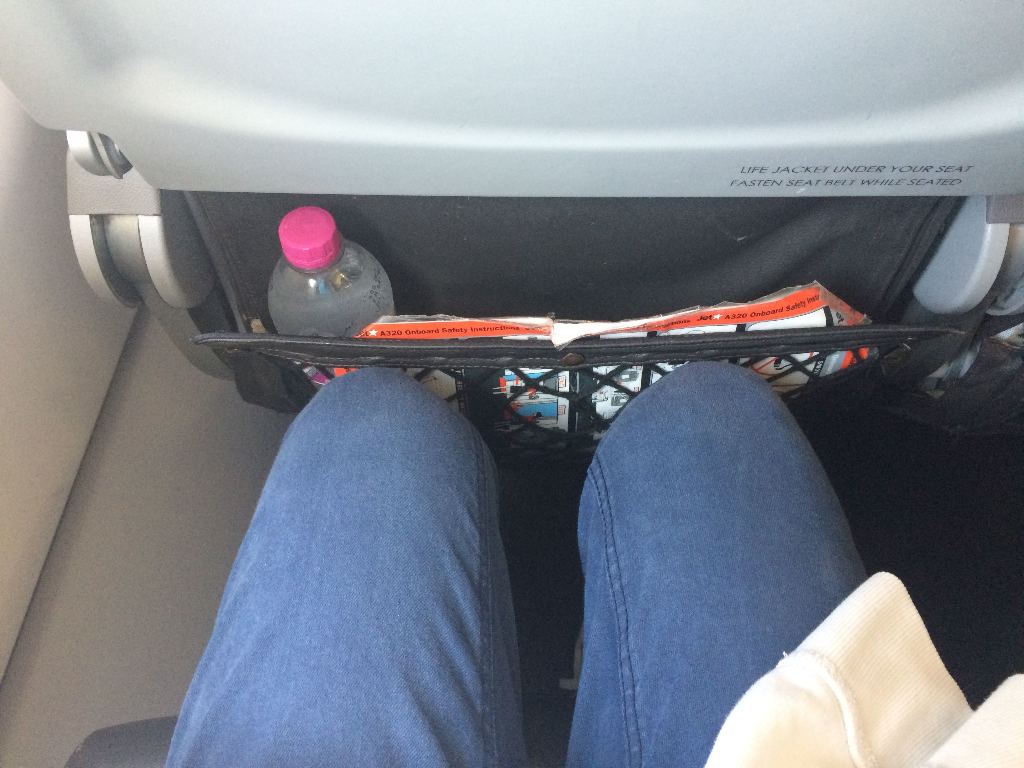 Push back was pretty much on time, and I could take some pictures of planes at the ramp while we were taxiing. 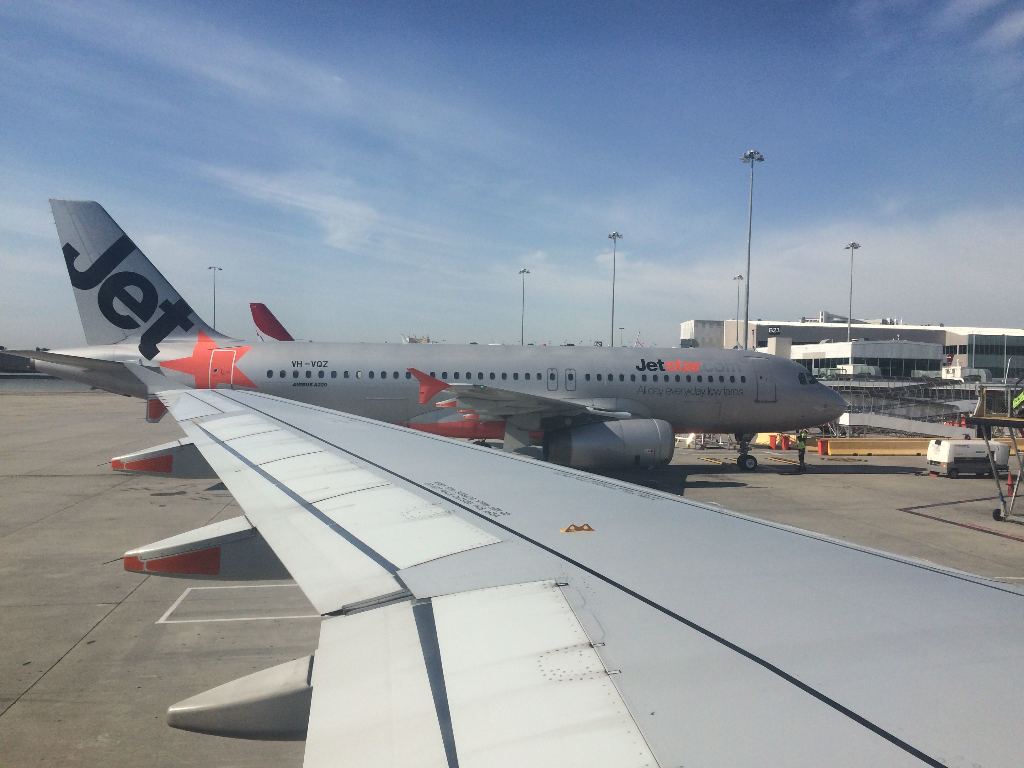 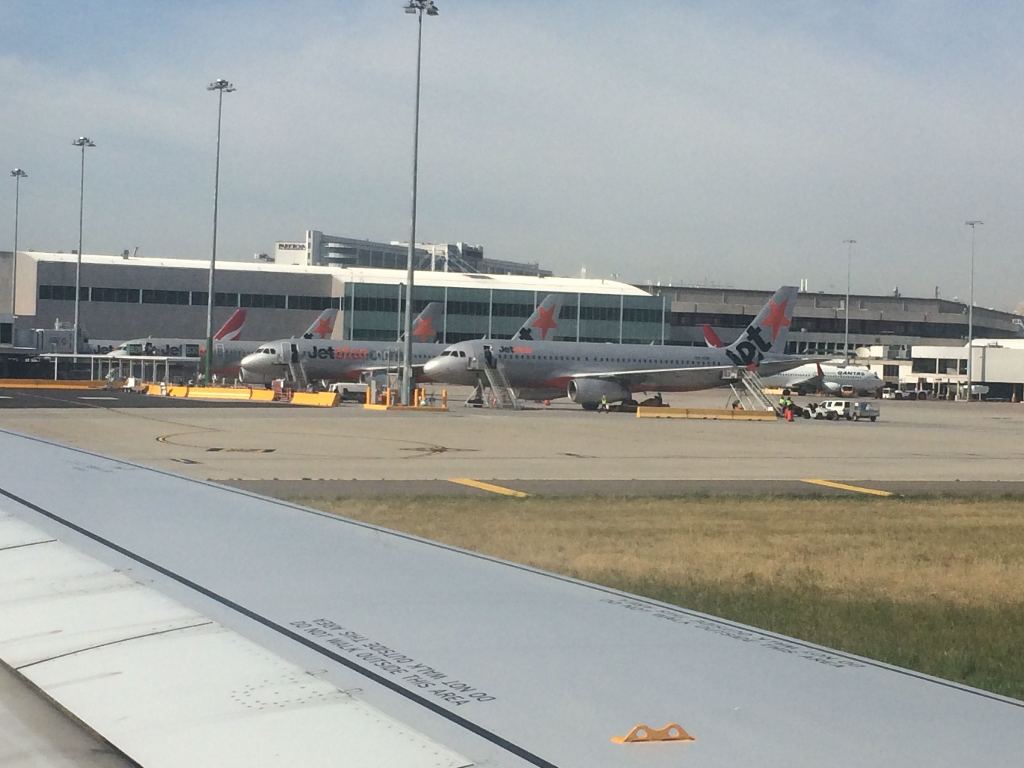 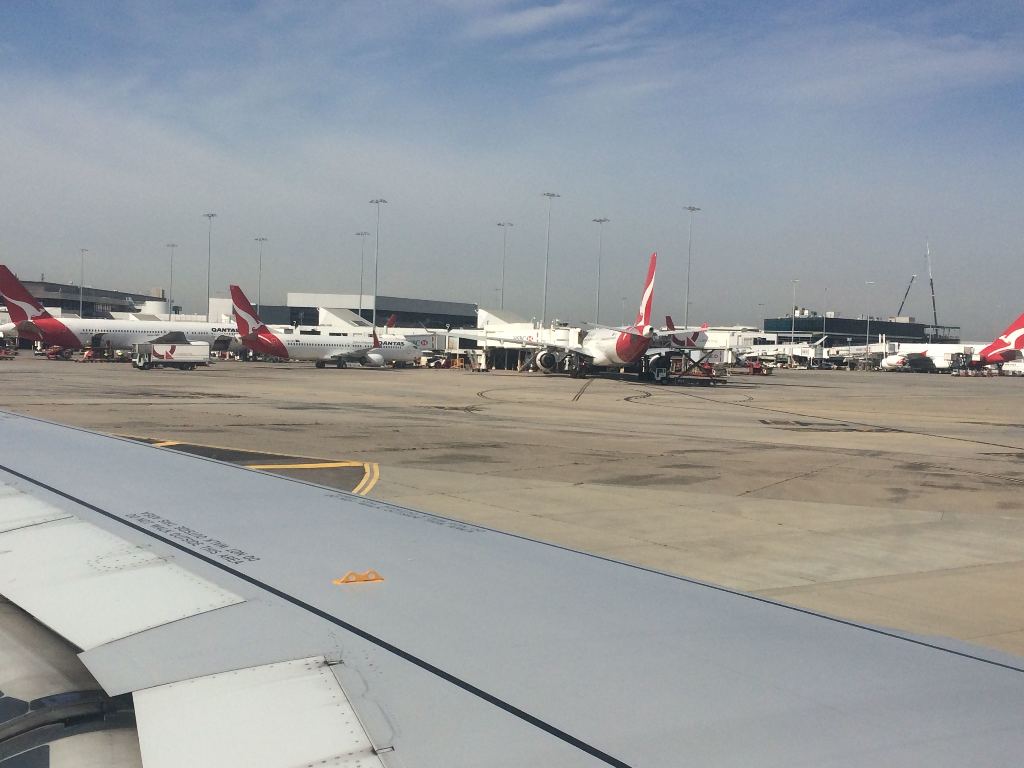 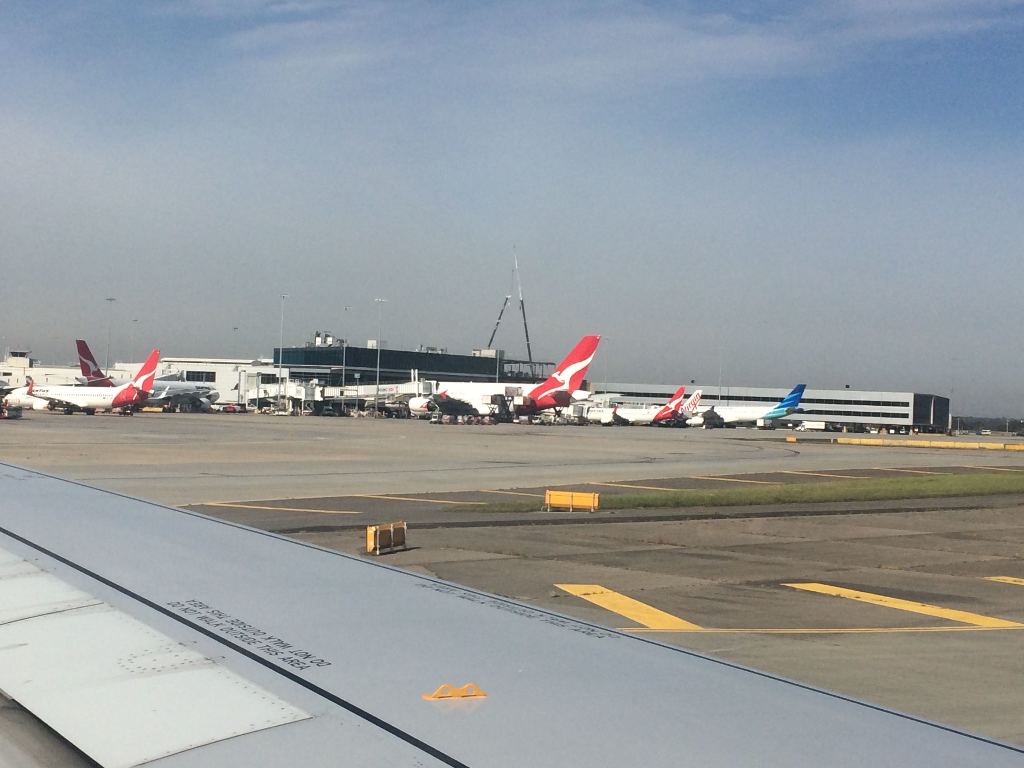 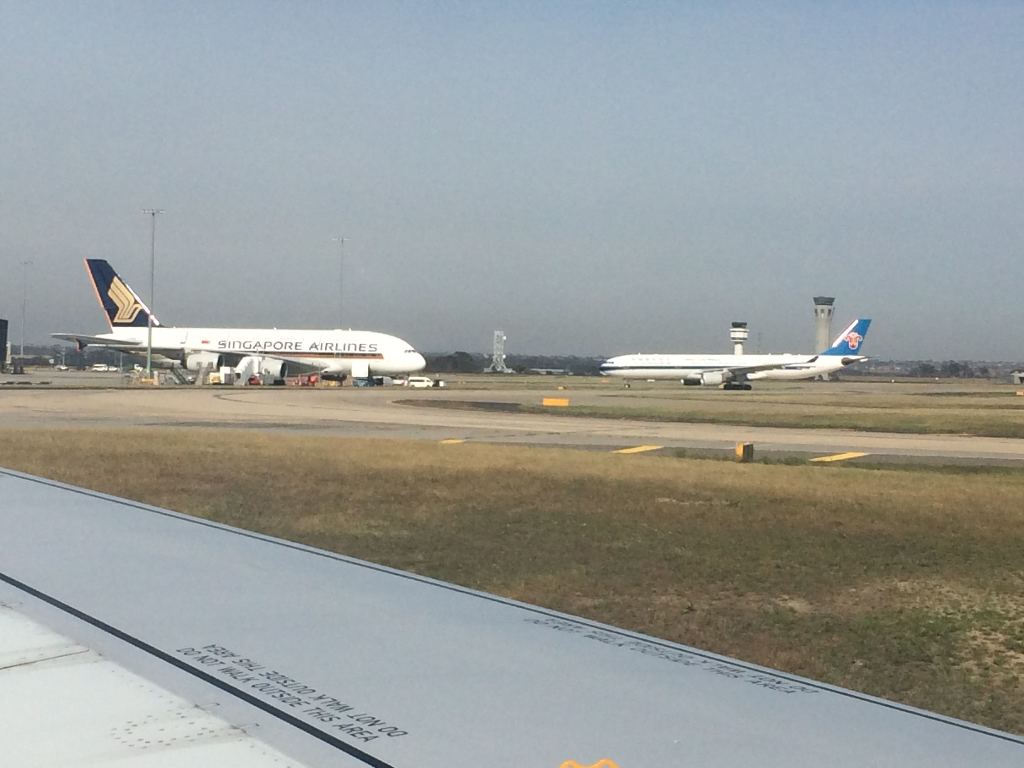 We took off 10 minutes behind schedule, at around 9:40.
I honestly don't have much to say about this flight because I tried to rest as much as possible, given we had had a short night on the previous flight, and our trip in Australia would be quite hectic.
At one point I almost managed to get a comfortable position, by resting my legs on the wall in hope for ever so slightly more legroom.

That's the most comfortable position I managed to find: 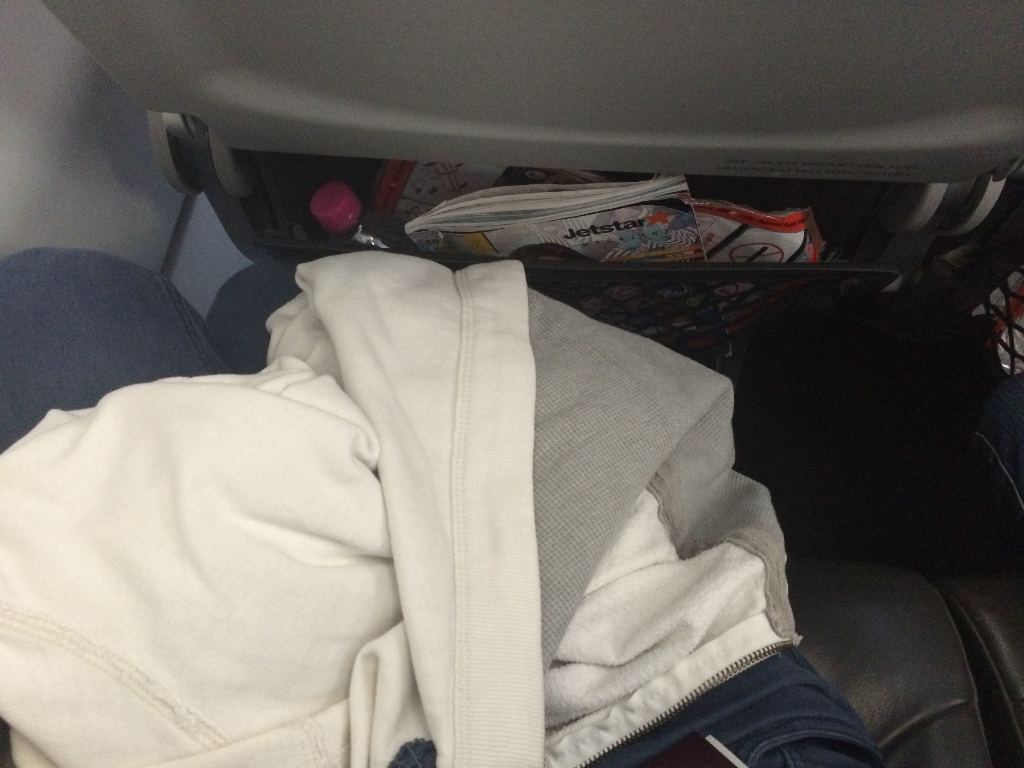 Nice landscape out the window: 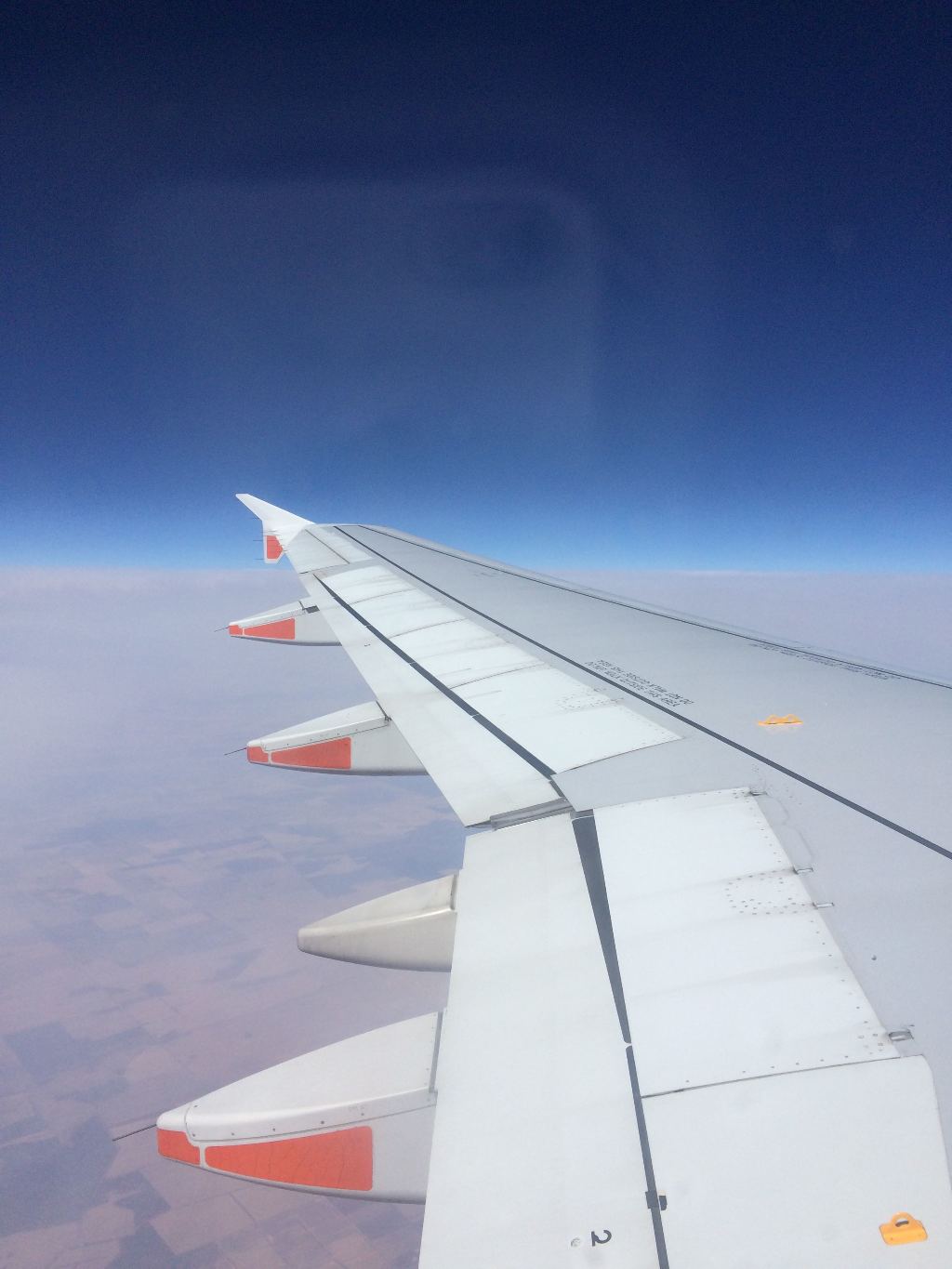 View of the cabin from the rear galley: 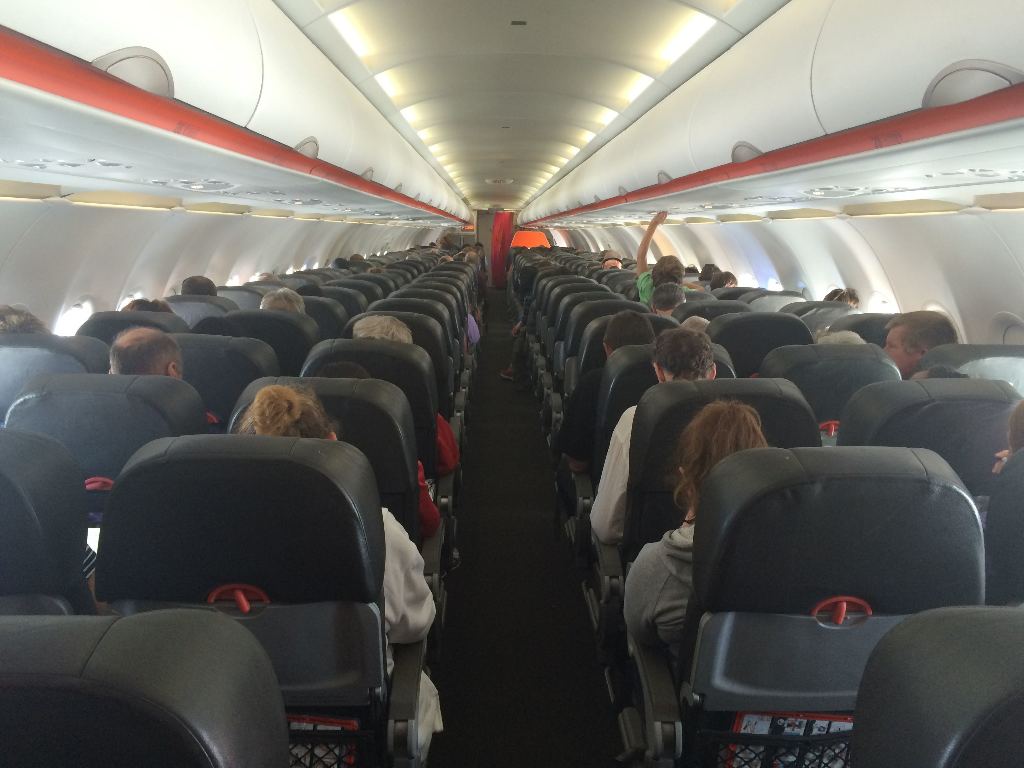 Around 20 mins prior to landing we started our decent to Ayers Rock, with some beautiful landscapes out the window.

It was pretty cloudy when we started our descent: 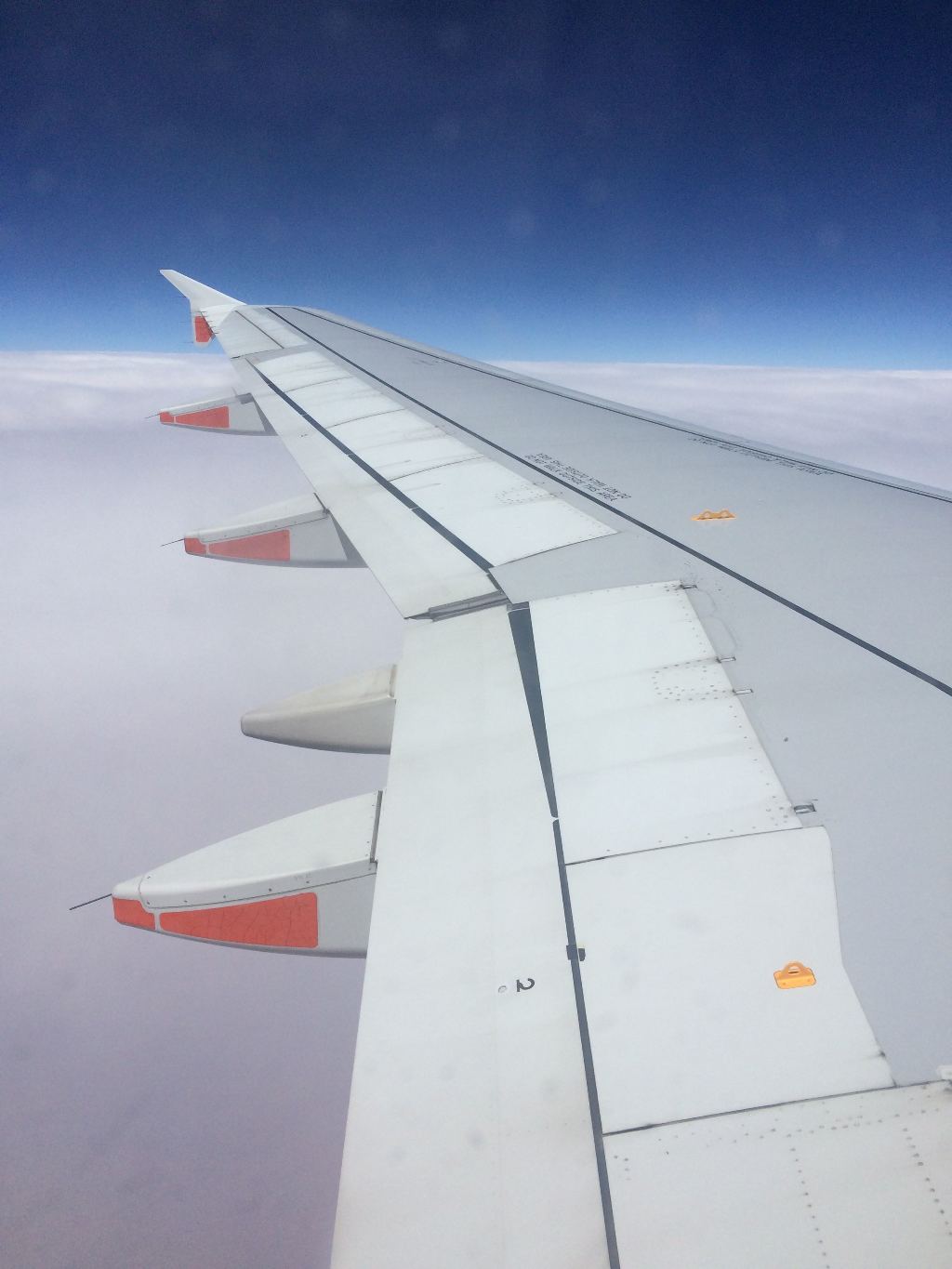 But it then cleared for some nice scenery: 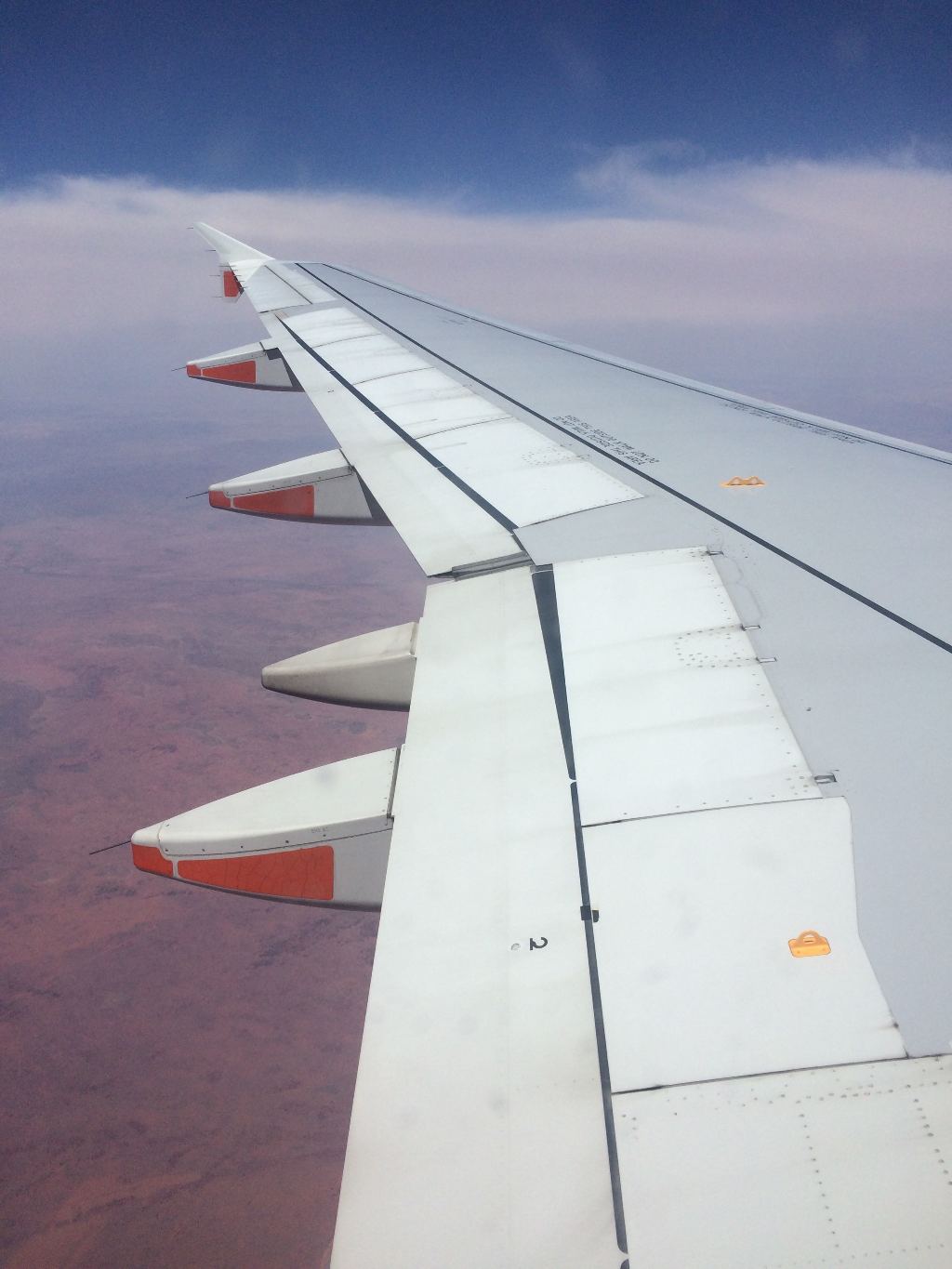 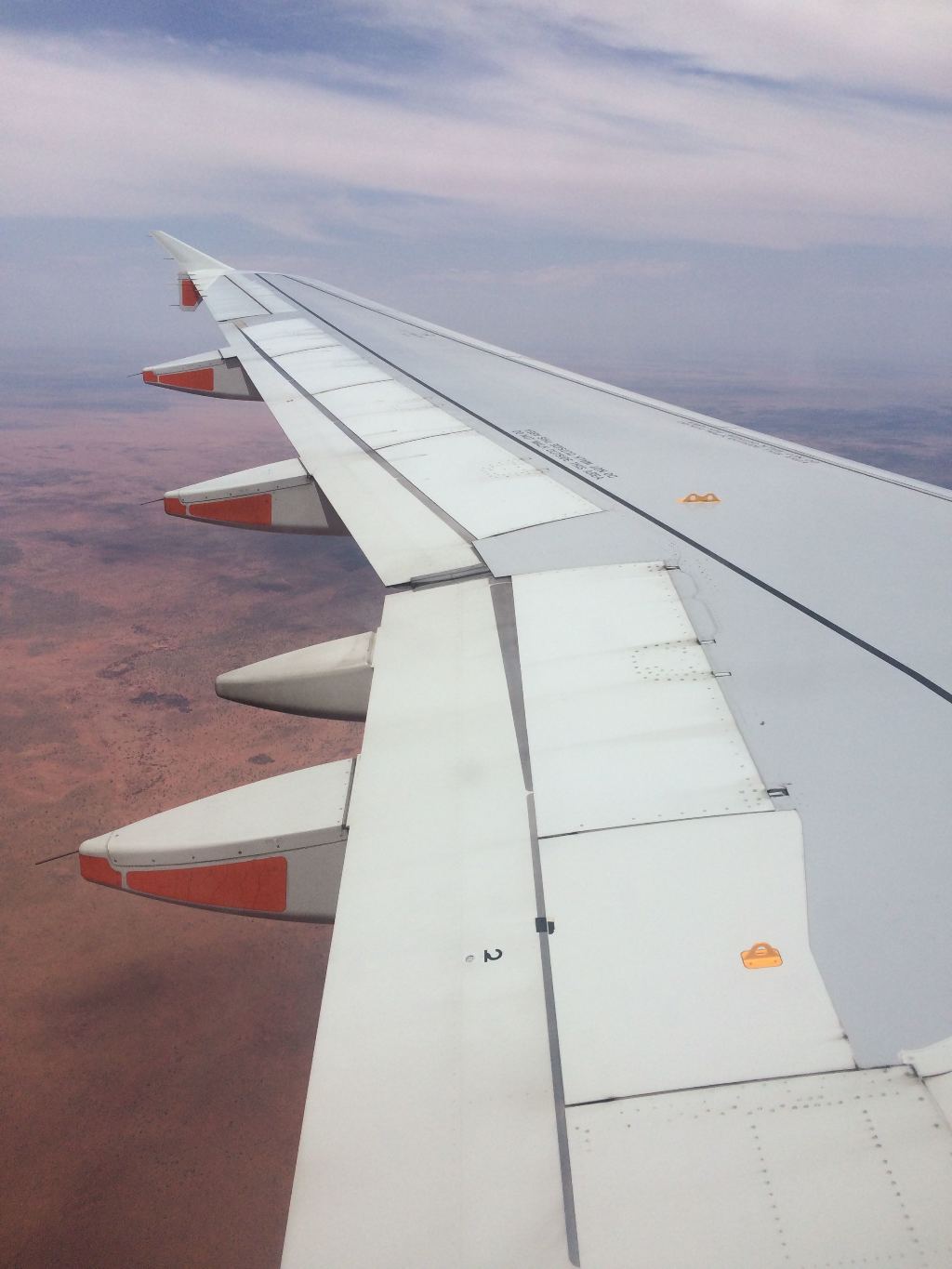 And finally after 2 hours and 40 minutes of suffering, we landed at Ayers Rock at 10:50 local time (Melbourne is 30 minutes ahead of Ayers Rock) 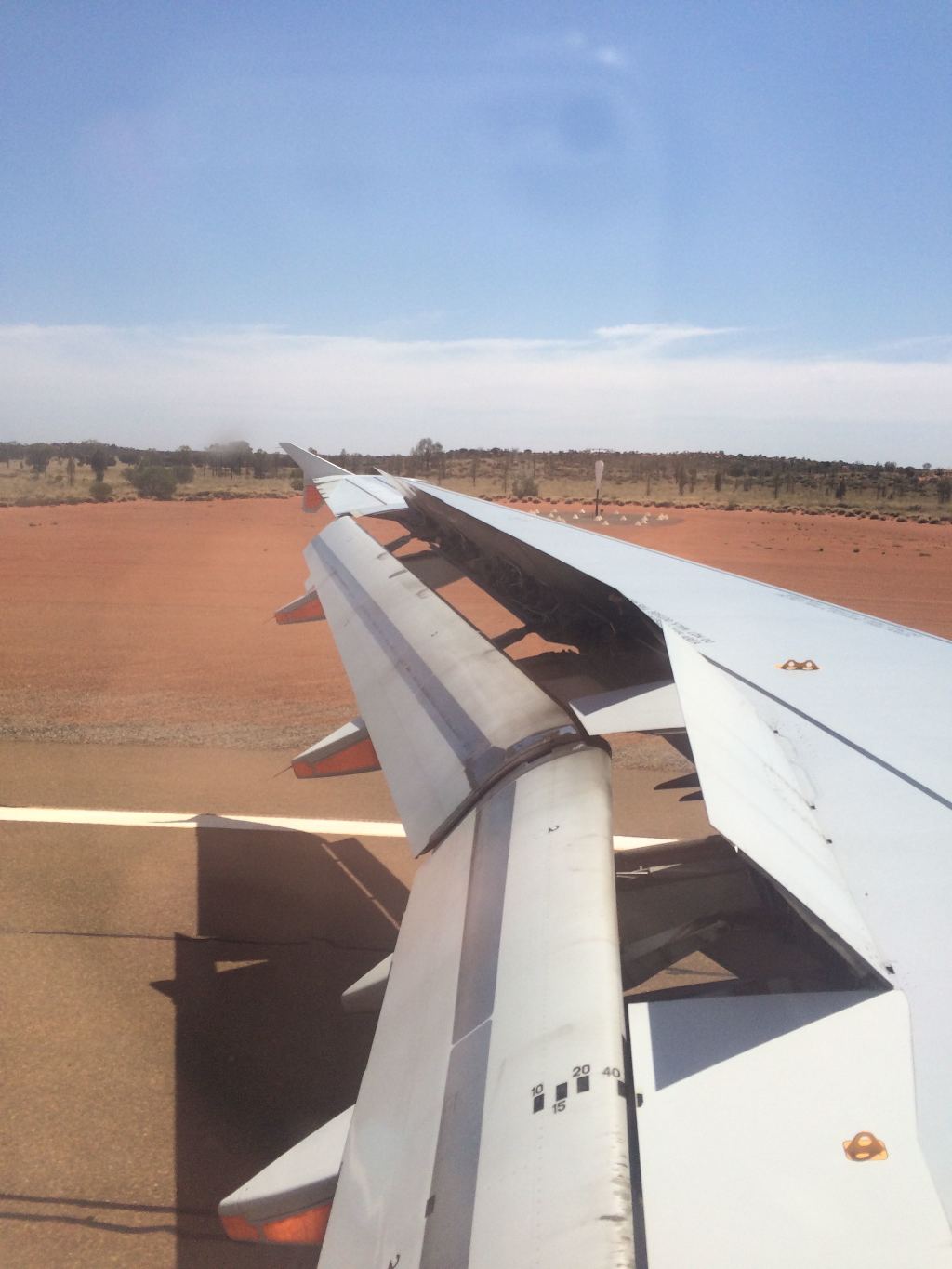 Ayers Rock is a small airport, so when we arrived in front of the terminal, the pilot turned the aircraft to 90 degrees, so he could go back to the runway without pushback.
We disembarked quickly, and this time nobody shouted at me when I took a photo of the bird.

The bird after the short hop: 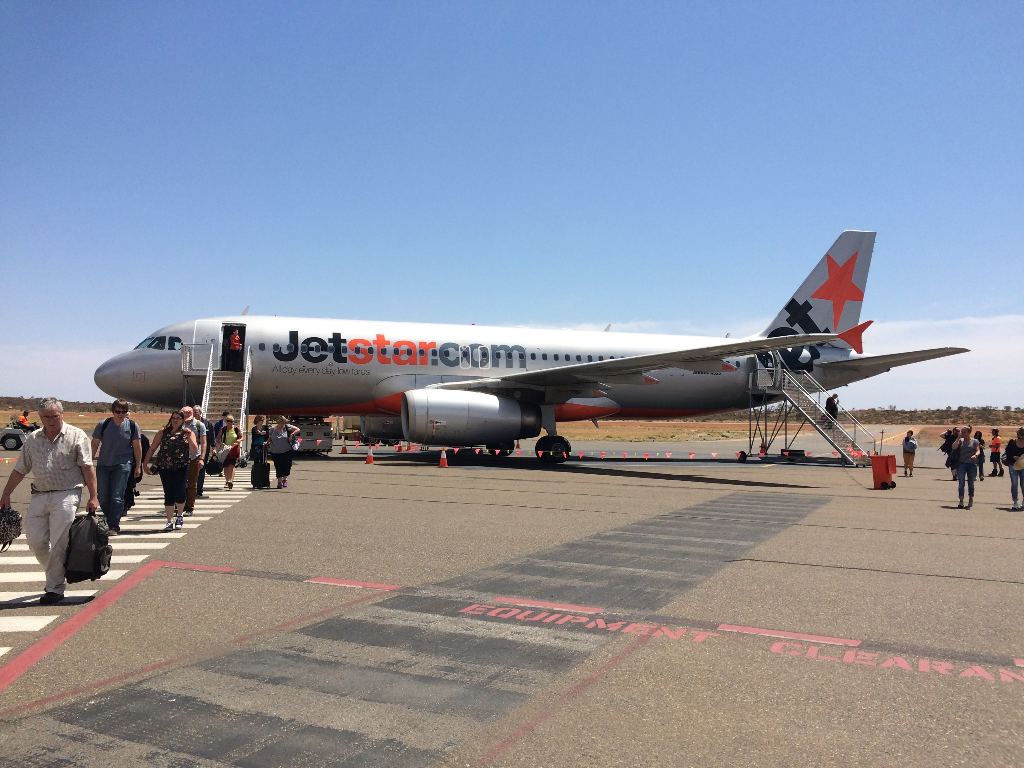 We arrived at the terminal, and well we couldn't really miss the conveyor belt since there was only one, right when you enter the terminal.
After 10 minutes, we collected our luggage, and started our great Australian trip! 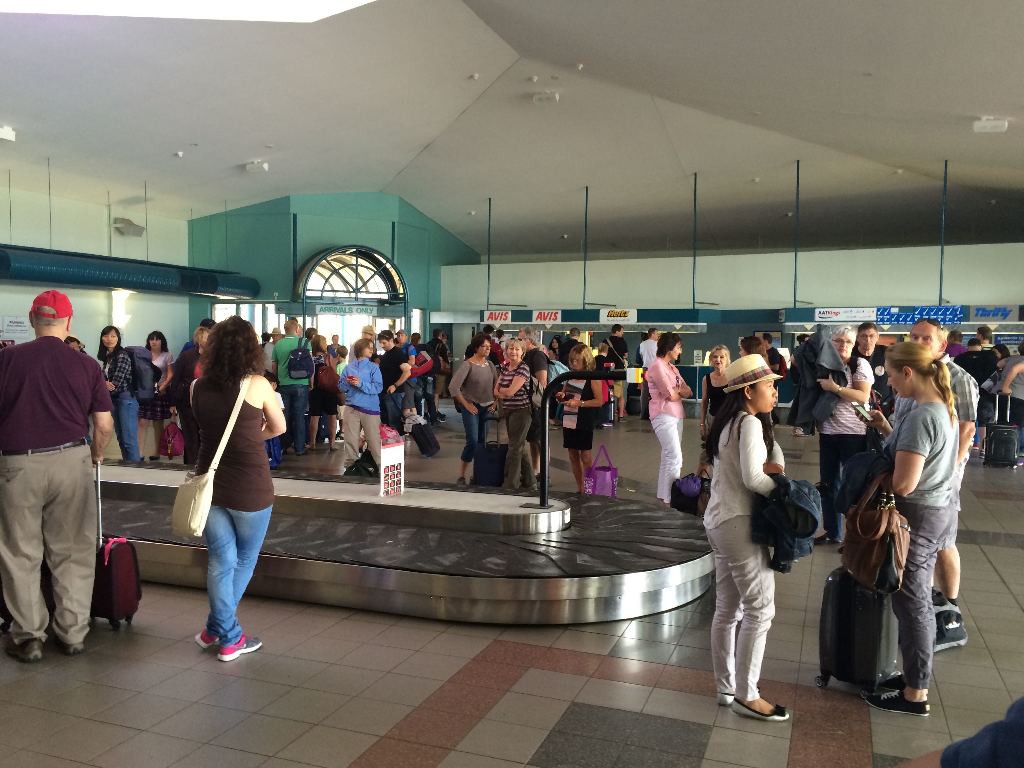 There is one thing I have to say about Ayers Rock airport: it's oddly organised.
Should you wish to have something to eat upon arrival, you need to go through security, even without a boarding pass, in order to access the café which is located on the departure side… Pretty much anyone can have access to the gates without having a boarding pass. Rather odd.

Thank you for reading this rather short report. The next one will be slightly more interesting as it's on a pretty rare aircraft: a 717-200!
Once again, all comments are welcome and much appreciated.
See more

Overall, it gets the work done, but nothing else.
Cabin comfort is very limited, and apart from selling a bottle of water for 10$, you don't see the crew much.
These conditions were acceptable for a short flight, but I was honestly relieved to leave the aircraft, which is probably the first time I say so.