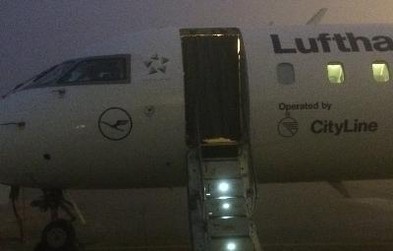 By Carlos 2563
Published on 8th November 2014
As I decided to run for the title of “slowest flight-reporter ever”, here starts the report of my trip to New York City in March 2014.

I had to go to New York because that’s where the first international Flight-Report.com meeting took place. It was really an amazing experience to meet so many interesting people and talk about Aviation and so many other topics!

If you missed that meeting, you should definitely check Flight-Reports Blog and join us for the next one!

Here is my routing:


As usual, the first step of the trip was to reach the airport in time, and it didn’t start really well as I missed the “S-Bahn” I initially planned to take. Waiting for the next one was too risky and the only remaining solution for me was to find a cab and ask the driver to go to the airport as fast as possible. And that’s what I did! Those are the moments when you enjoy having no speed limit on German “Autobahn” highways.

It only took us around ten minutes to complete the 20km (12,5miles) from Leipzig “Hauptbahnhof” in the city center (Central railway station) to the Airport located on the outskirts of the town.

I paid the taxi driver at 5:50am (36€20 that’s approximately 8 times more than the 4€20 I would have paid for the “S-Bahn”… Next time I’ll wake up earlier!), knowing that the boarding time was 6:05am, so I rushed through the security controls took the first picture of that flight report five minutes later, once airside.

By chance, my boarding gate 01 was located exactly in front of the security controls.
That gave me a 10minutes break to breathe and take a few pictures before boarding, after such a stressful beginning.

The gate opened exactly in time and passengers carrying a big hand luggage were given a Delivery at Aircraft tag.

Indeed the size of the CRJ700 cabin is pretty small and those luggages had to be put in the hold, because they don't fit in the overhead compartments.

A PAX-Bus was waiting for us in the fog, just in front of the door.

This trip was for me the perfect occasion to test my brand new Samsonite Short-lite upright 55cm for the first time.

It’s the lightest hand Luggage Samsonite ever made with 1.6kg (3,5lbs), but not the strongest as it didn't come back from that trip to New York undamaged!

I really love that carry on suitcase, it’s well designed, extremely light and has a big volume, but as a piece of advice: don't check it in, if you don't want to get it back with holes everywhere!
(Anyway, I bought a new one after that trip and won't check it in, ever!)

A few minutes later we arrived to the plane, it's a Bombardier CRJ700 named Neumarkt i.d. Opf that flew for the first time in 2002.

The cabin was still being prepared and we waited another five minutes before boarding.

Jet bridges can be cool, but I still love boarding directly on the runway!

Here's a quick sight in the cockpit. (sorry for the portrait orientation of the picture)

One of the flight attendants welcomed us with a German “Corny” cereal bar, that I didn't eat.

As the flight was quite empty, I had the opportunity to sit in 3A instead of the 8A I booked.

The first three rows are theoretically “Lufthansa Business Class”, but I’m not really sure if the pitch is better than behind or not.

Speaking about the pitch :

Then I wanted to take a picture during the safety briefing but my flight attendant was shy and grassed me to up her colleague!

Time to check the content of the seat pocket in front of me: A Lufthansa magazine, a bag and the safety card.

Here is the safety card: (translated in German, English and French)

…and we were asked if we'd like to drink something. For me a Coke as usual.

My neighbour took an orange juice and a cofee, but we had nothing to eat apart from the cereal bar.

There is a pretty smart coat hook integrated in each seat :

A few minutes before landing, we were able to catch a sight on the Alps.

But I knew that I would have a better view in the next flight between MUC and CDG.

We touched the ground at 7:17 and taxied to reach our parking area.

And last sight into the cockpit before deplaning :

While the sun contunued to rise, a PAX Bus took us to the gate, that we reached exacty in time.

LEJ is easy to reach when you take a taxi, the security controls were fine and I was pretty lucky to have the gate 01.

The flight was good, and perfectly in time; I had the chance to seat alone in the front rows which improved the comfort.

I would have liked to have something else to eat with my drink, but it’s a domestic flight and people are probably not supposed to be hungry on domestic flights.

MUC airport will be described more accurately in the second flight of the routing !

Carlos is member of Flight-Report since October 2013.

He wrote 9 reviews about 5 airlines and 7 airports.