#17 out of 72 Airlines A minimum of 10 flight-reports within the past two years is required to appear in the rankings. 366 reviews I already had the boarding pass for this flight as I am connecting on Singapore Airlines from Delhi to Bangkok via Singapore. During my layover in Singapore, I had the chance to meet up with friends in town and thus I headed to the gate as late as possible. Upon crossing the immigration easily, as it is always the case in Singapore, I head to the Thai Airways Royal Silk lounge located at Terminal 1. Star Alliance Gold member can access this lounge and the entrance can easily be seen since it is using Thai Airways purple colours. Inside the Royal Silk lounge

The lounge was quite empty when I arrived and inside there was a very good range of magazines and newspapers. Behind the shelf, there was also some food and light snacks with a bar fridge filled with the usual sodas. This was quite a good lounge to wait for a flight and more or less on par to other airlines' outstation lounges. There was also lounge wifi but then again the whole of Changi Airport has free wifi anyway. I did not linger long in the lounge and made my way to the boarding gate which is probably 5-10 minutes walk away. The short flight to Bangkok today was served by a 777-300 and it seems to be quite full in both Business and Economy as there was a lot of passengers waiting in the gate area. Boarding commenced shortly after I arrived at the gate and it was quite orderly with Business passengers and frequent flyers being able to board first. The business class cabin onboard the 777-300 was configured in a 2-3-2 arrangement like the ones in KLM and it was also in an angled-flat seat. Generally this would be adequate for a 3-5 hour flight in my opinion as long as it is not a red-eye departure. The seats are also similar to what Thai Airways installed in their A330s, though the 2-2-2 configuration there was much better. Though there seems to be more legroom in the 777. The aisle seat next to me was soon occupied as it seems to be a full flight today in Business class and I settled down fairly quickly after flying the whole night yesterday and meeting up with friends for brunch earlier today. Cabin crew gave out drinks and towels upon boarding but the service was a bit rushed due to the full business class cabin. There was also a short queue for take-off and before long we were cruising the skies headed north. 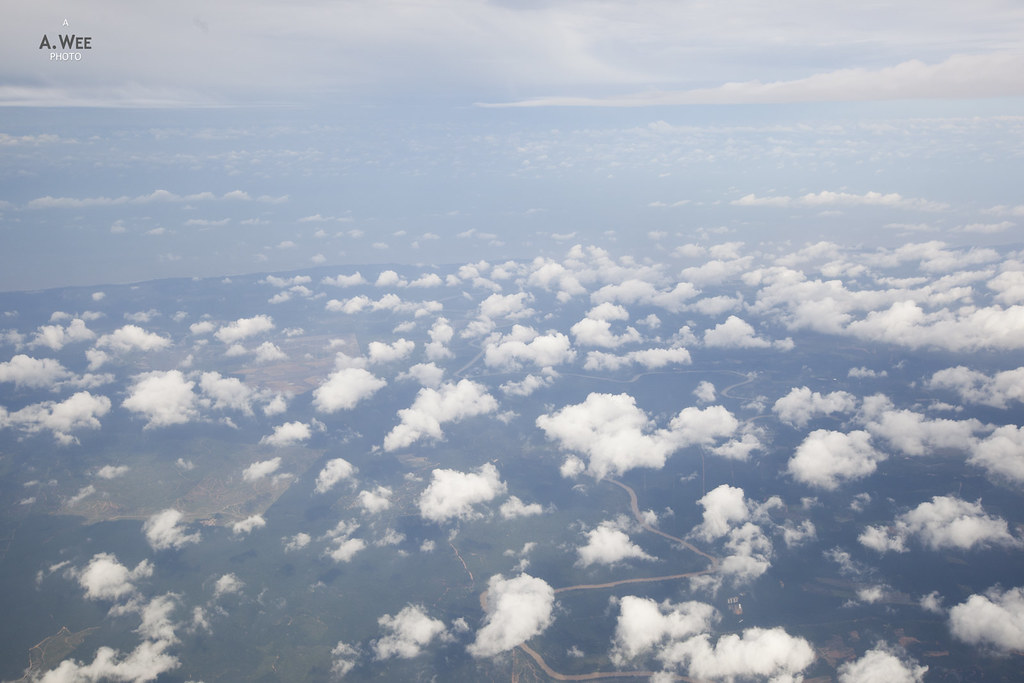 Clouds off the coast of Malaysia

After the seat belts signal was turned off, the cabin crew came out to distribute sunflower seeds and our choice of beverage. I had the Thai iced tea which are sweetened and a refreshing beverage for a flight on Thai Airways. I then perused the menu in expectation of my late lunch and the menu for the flight read as:

I picked the roast duck for my meal and it was served in a tray along with the appetizer and dessert. The crew then came around with offers for bread and garlic bread. As usual, they crew always gave 2 garlic breads to passengers. The meal service onboard Thai Airways were always well presented even with the whole tray service as they pay enough attention to details such as having the cutlery wrapper with the 'I Fly Thai' insignia and their use of nice porcelain. The roast duck main course was better than I expected as the meat was surprisingly juice and not dry. The rice noodles also maintained a chewy and moist texture. Thus I did enjoy both the appetizer and the main course. However the dessert was a bit too sweet and not very well done. However I was quite full anyway since I did have a very good brunch in town earlier on. After the short meal service, I reclined my seat to the angled flat position and took a nap all the way until we started our descent as we passed the Gulf of Thailand. Coastline of Thailand on descent

It was a nice sunset landing into Bangkok Suvarnabhumi and as we taxi-ed to the gate, I was able to spot some interesting mix of airlines, which was always the case in Bangkok. In addition to Israel's El-Al 747, we parked next to an Air Madagascar A340 so that made for a nice ending to this short but excellent flight. Thai Airways provides excellent service and great food for a short regional flight and makes for a great airline within the Star Alliance team.