#30 out of 74 Airlines A minimum of 10 flight-reports within the past two years is required to appear in the rankings. 957 reviews

Another report this time on my return to Europe from Lima on KLM.
This report is not as detailed as other past reports because I had the luck to arrive a bit late to the airport for check in and then having some kind of KLM deadhead (maybe pilot? he was a very nice and friendly seatmate I must say) on the way back to Amsterdam seated next to me…so I wanted to avoid catching more attention than usual :P

After a long drive I managed to arrive to Lima Jorge Chavez Airport. This is a small/medium unique terminal building with a single runway (15/33) and handles aprox. 16 million passengers/year. It is a big hub for Oneworld (LA,LP) and StarAlliance (TA/AV). There are concrete plans to start the building of the T2 next year 2016 with the second runway (15R/15L) which will make the airport handle 35million passengers for 2030. After checking in at the joint check in desk of AF/KL ( Handling KL744 772 Dep:2015 and AF483 77W Dep:2120 I proceeded for the security control and immigration check. The airport is very busy but it is well managed and everything takes little time , as a remark this airport has been awarded the Skytrax Best South American airport for 6 years in a row and is one of the top 50 airports in the world for quality of service. It has 20 jetways and many remote parking positions.

After all checks were done I walked to the Sumaq VIP lounge, the international area has two lounges, both operated by private handlers. Sumaq and VIP Club managed by the airport consortium. There are plenty of seats and relax areas on the lounge, unfortunately as I state this airport is overcrowded and exceeds easily its capacity. I was lucky enough to find a seat as most passengers were flying to Europe at the same time.

My selection was the peruvian national drink 'Pisco Sour' - Pisco is a distilled spirit of white grape grown in the South of Peru since the 17th century- This cocktail has been featured lately worldwide and according to the history it was created by an american bartender back on the 1920's in Lima- consists of pisco, lemon juice (squeezed), egg yaw and bitter, shaken and served chilled.It is one of my favorite cocktails by the way… After some minutes I proceeded to gate 19. KLM flight 744 to Amsterdam was ready to board. The bird today was PH-BQN with the old style 90's World Business Class seat. I was greeted at the L2 door and shown to my seat 1A. After settled on my seat I was welcomed with the amenity kit and Nicolas Feuillate, standard for KLM.
Leg room shot: 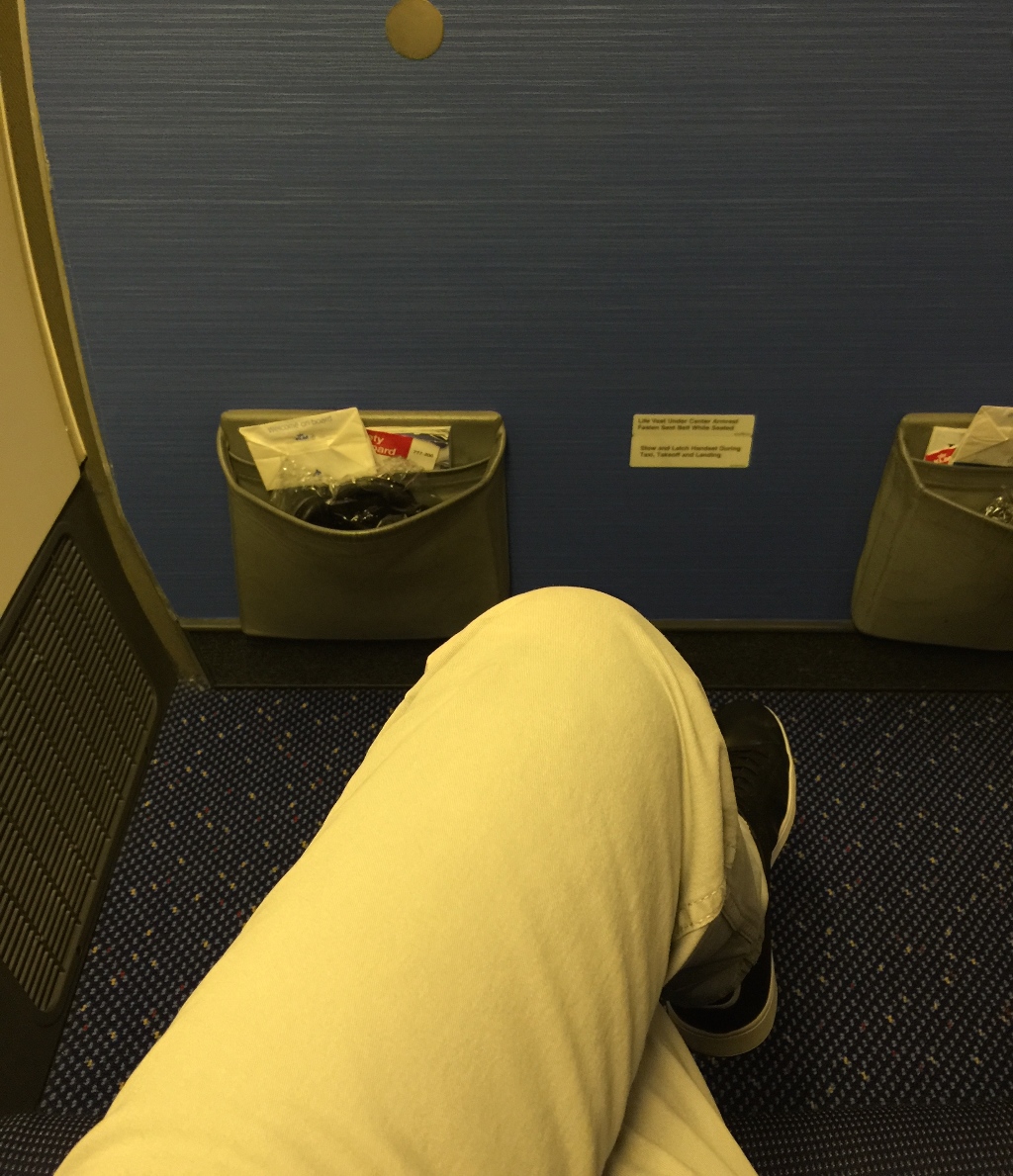 After some few minutes door was closed and we were ready for pushback. 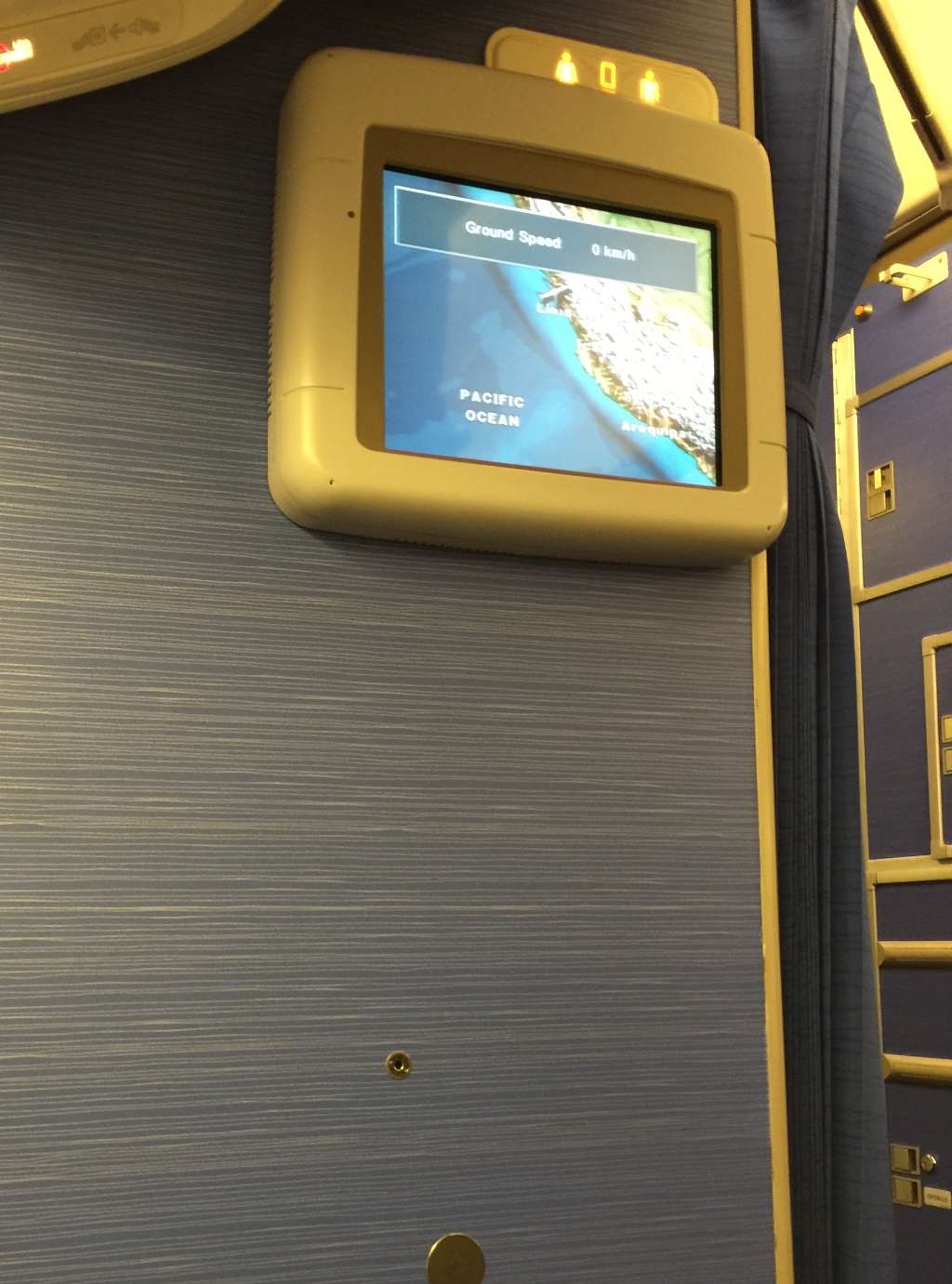 We took off with that beautiful roar of the 777 engines and headed south over the Pacific Ocean to gain altitude and turn right again to cross the Andes Mountains just a few miles away from the water shores of Lima. The highest peaks on the Andes can reach 25,500ft. 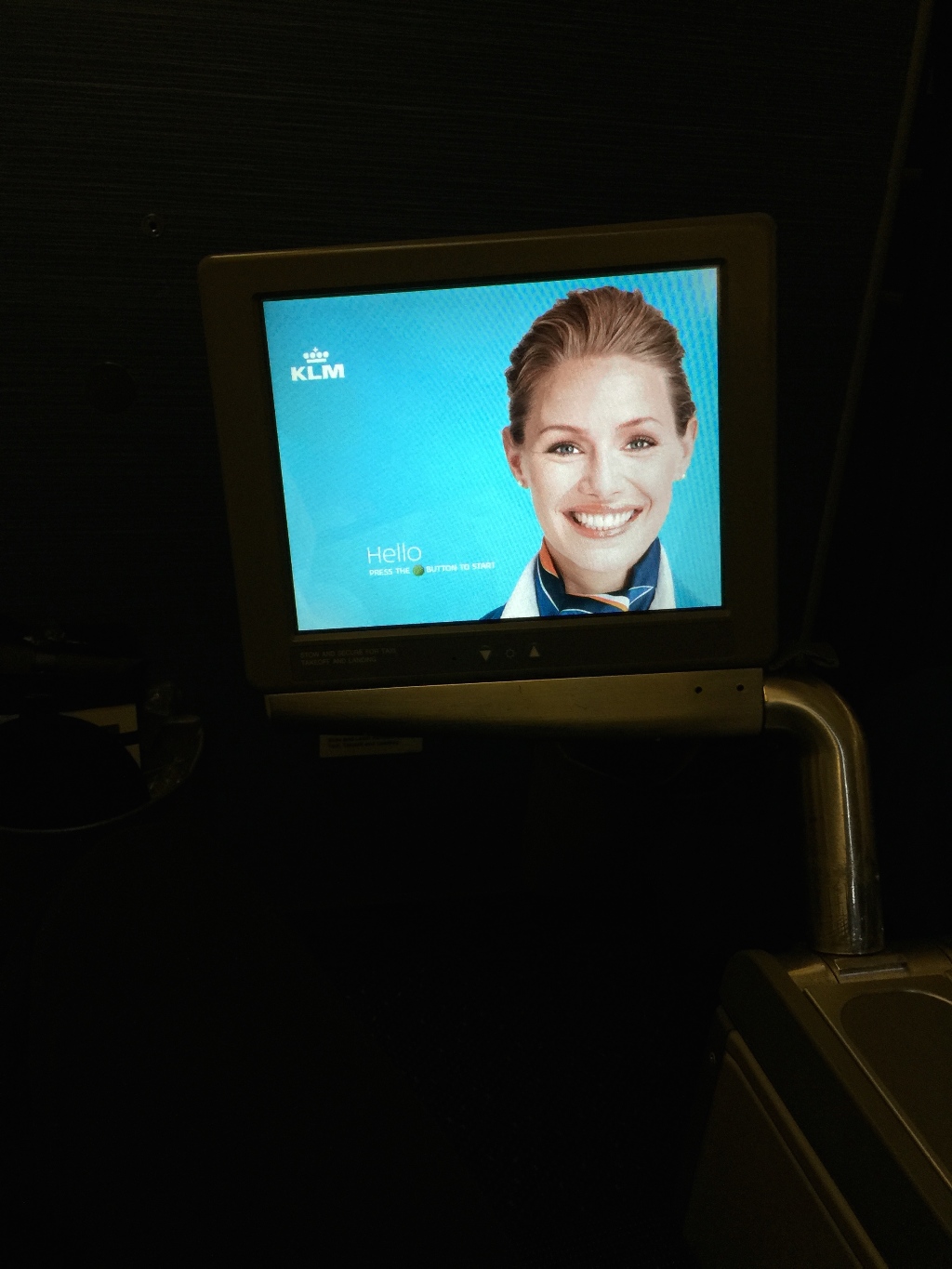 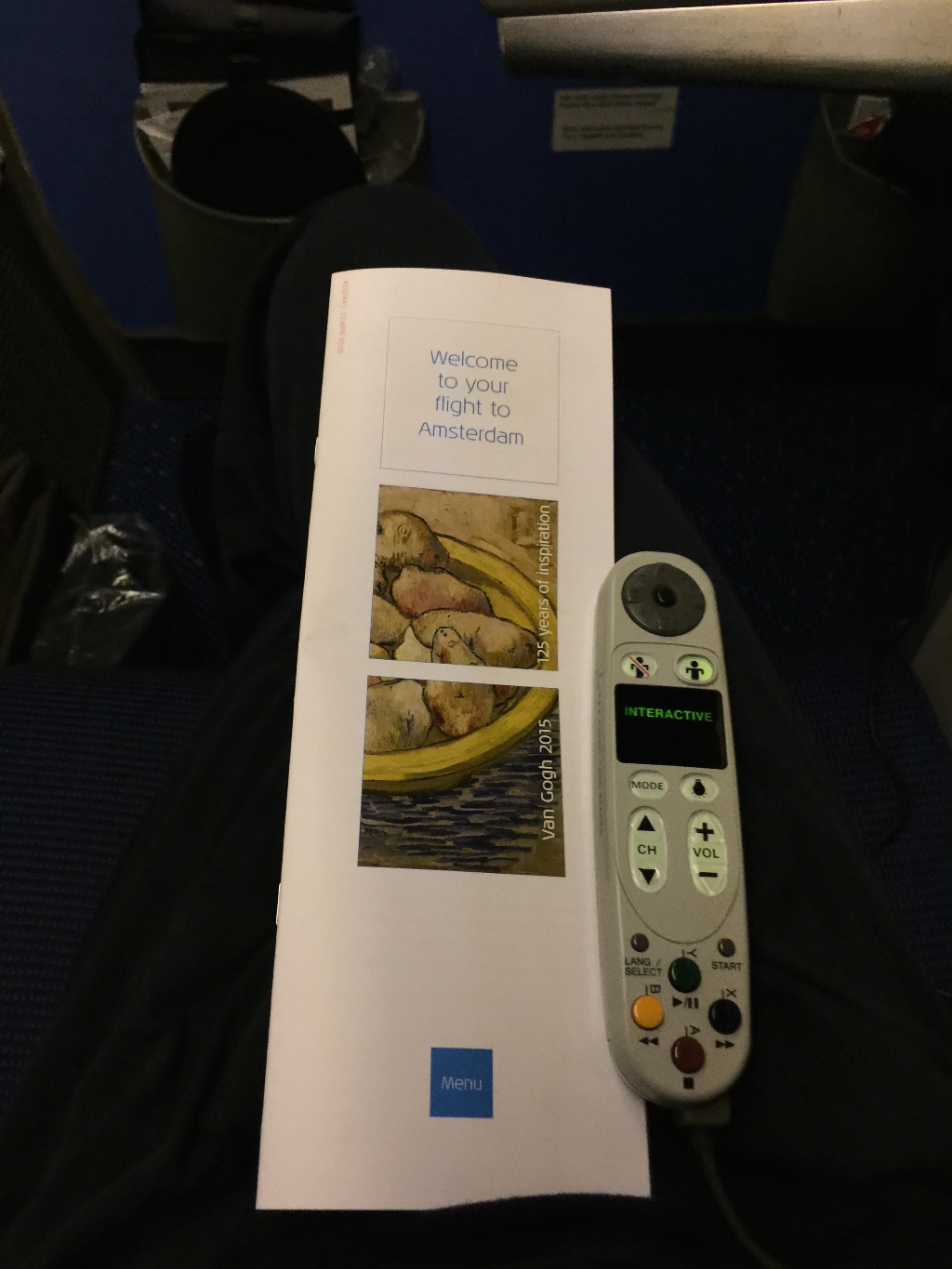 Menu was handed out, options are the usual for KLM. I decided not to take pictures as the menu was the same as many lately WBC reports published here. Starter, I choose the potato and leek soup, it came together with a small portion of garden salad and warm bread. Cabin crew service was outstanding on manners and friendliness.

Wine options were varied, more options than chez AF…quality was so so, let's say the wines offered are for everyday table use at home. I remember on white Marques de Caceres Verdejo which is alright for a day at the beach or a sunset evening and on the red Marques de Caceres Excellens and a french Bordeaux which was adequate. The main options were fish, beef or pasta. I decided for the beef with red wine sauce, veggies and rice. This was a huge let down again on the meal quality of KLM. Beef was good but there were only three pieces of sliced beef (3) yes , only 3! this was worse than BA's first class beef cut which is a shame already.

Here is the testimony of this outrage! :D Following the ''light'' meal , dessert trolley came and I decided to try the caramel cheesecake, which was not a cheesecake by any end I have seen before, once again quality was below standard. Cheese was fine, presentation was a shame though. 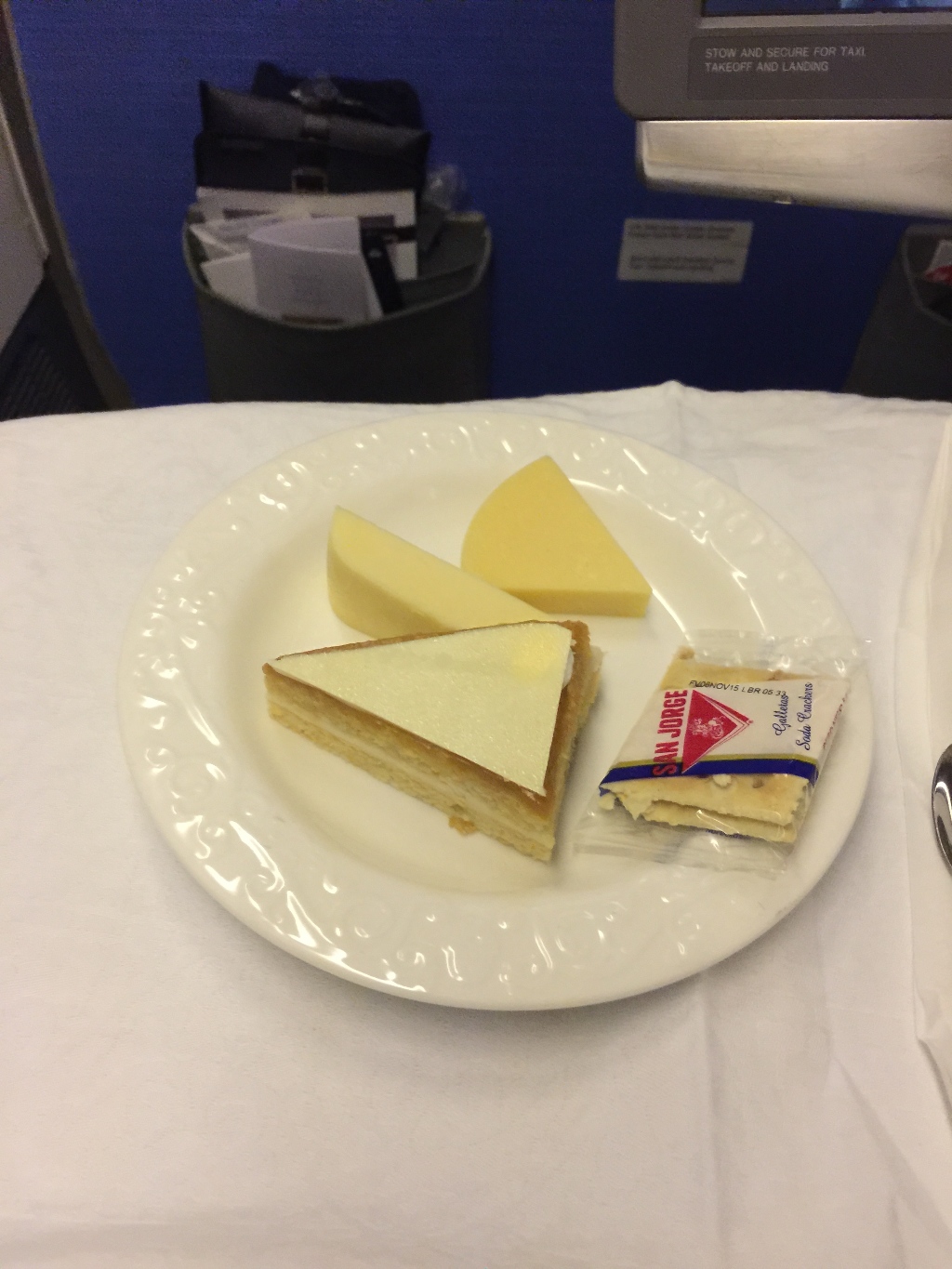 Some few minutes later the tray was collected by the excellent cabin crew working on my aisle, I declined for any digestive and unfortunately I forgot that KLM doesn't have an espresso machine aboard…such a shame nowadays :(

I managed to reach a solid 4 hours sleep and woke up around almost over the Azores Islands. Now comes the interesting part, I love KLM serving pure fresh orange juice, which is a premium over other carriers including sister AF. But the breakfast was…OMG I don't have words to describe it. First of all, comparing trip reports from back 2006 on the same route they have cut the size of the servings to less than a half. The options were savory (eggs) or sweet (danish) I have had bad experiences with eggs on airplanes on the past so I opted for the latter. The danish was from the size of my fingers and it was old as the seat itself…this was the biggest shame , the biggest disappointment of KLM Lima's catering division ever! 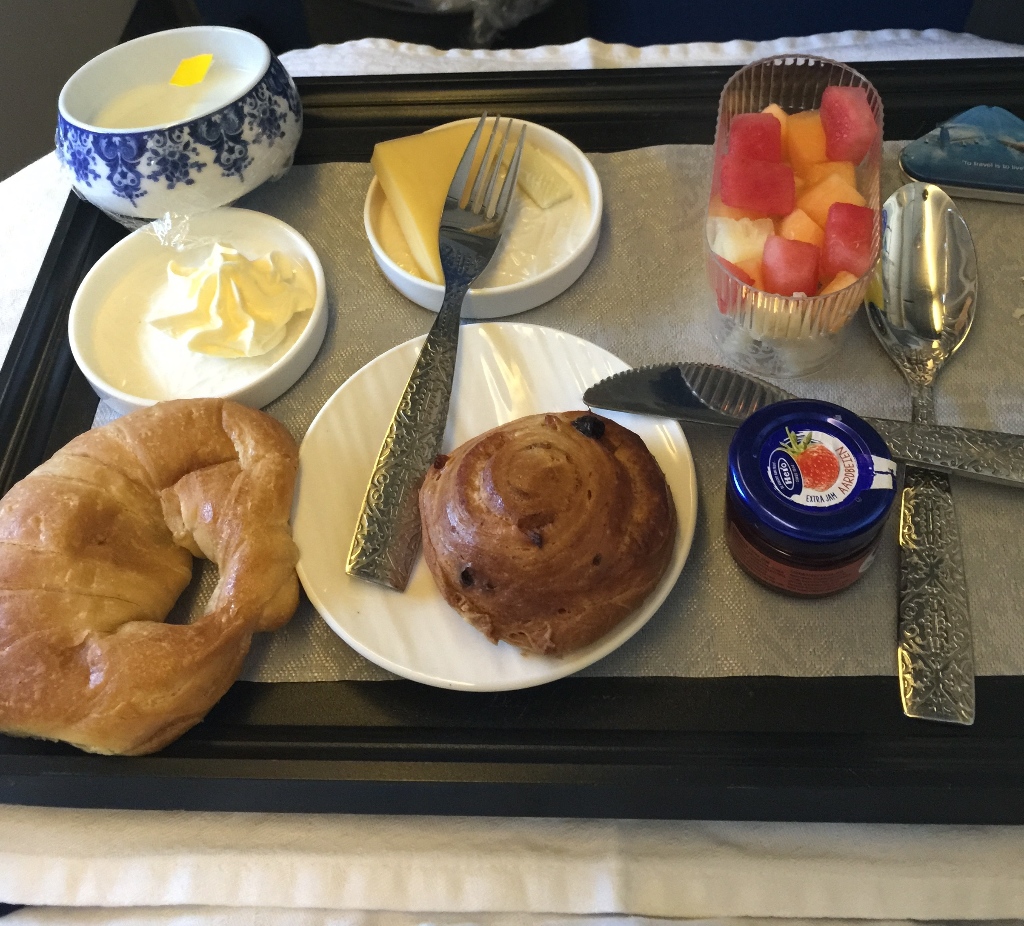 I tried to forgive this big mistake and just enjoy the final minutes of my flight to Amsterdam. Few moments after, we started our descent and landed on the north oriented runways of AMS (hence a quick taxi to the E gates).

I thanked personally the cabin crew lady working on my side of the aisle, which spoke excellent english and spanish and we exchanged some opinions on KLM's service and I gave her my feedback from the catering serving which was nicely welcomed by her promising that she would let the management know about it. The issue is when us the passengers don't complain of something we are not happy about, the airline has no way to know that someone (usually a genius seated behind a computer and a desk at KLM's main HQ) is messing up something on the service in order to save some cents to the company , but cutting costs on the wrong corners when the air tickets at least on Business Class are not cheaper now than they were 10 years ago. 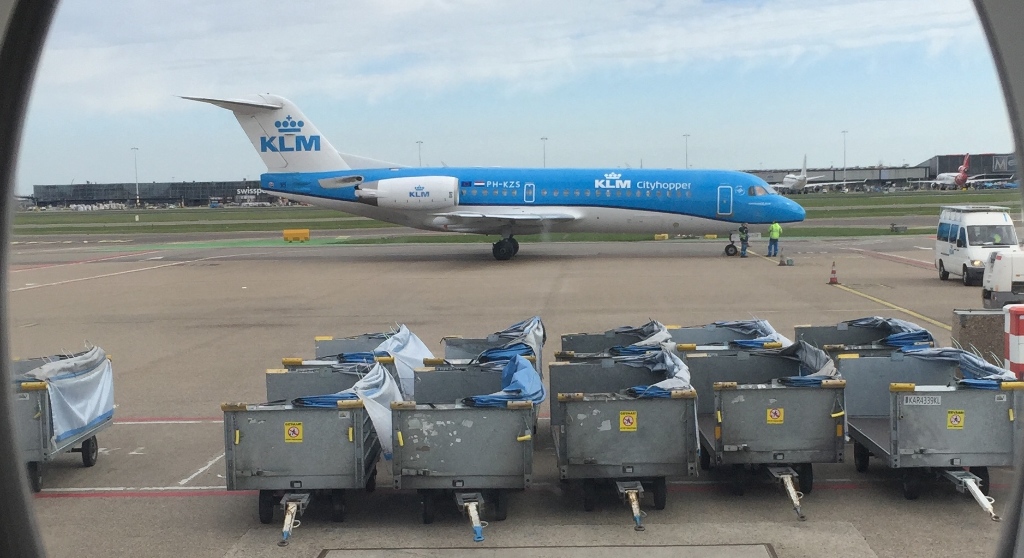 As I stated before KLM is a reliable airline. It manages to make their service work, take you safely and almost always on time without any luxury as other Business Classes (specially of the bling bling ME carriers) but I do like some points of it, for example I was given two KLM's signature delft houses as a gift which was greatly appreciated. We can say crew is natural and not forced or following a script like some asian or middle eastern airlines.

Amsterdam is a pleasure to transit and with all the issues of the catering which is truly a shame on KLM to offer that kind of service to a premium cabin everything went fine, flight on time and sort of rested on the 'sliding' old seat of WBC.

I am a big fan of KLM because of its history, I feel safe with them as also with AirFrance and mainly all legacy airlines. I am a Flying Blue Elite Plus since 2010, with that in mind I sent already a complain to the catering department letting them know this is not acceptable. I truly do hope they can correct this and be able to compete against EK/QR/EY etc and be able to keep their position of reliability for many years to come.

Thanks again for reading everyone and I apologies for the lack of pictures on this opportunity. I promise more pictures on my upcoming flight reports to Asia next month on AF NEV4 J 777/KL NEW WBC 747 and MU J A320.

The contributors of Flight-Report published 5 reviews of 1 airlines on the route Lima (LIM) → Amsterdam (AMS).

The average flight time is 12 hours and 19 minutes.