This was the third flight in my vacation in the south-east of China:

Quanzhou – Jinjiang Airport is really inside the city. In this panoramic picture, there is an avenue on the right.

There it is, from nearly the same location, shot with a not very powerful telelens: less than 400m away, it is the city center. On the other side of the runway, the houses are equally close.

But note, this is an international airport, which takes pride of welcoming from the 7th of November of that year a third daily flight to Hong-Kong (that is what makes it international, because HKG has a quasi foreign status as far as traveling are concerned), operated like the other two by Shenzhen Airlines, with fares 400 RMB up. Probably not everyday that cheap, because it usually is rather 550 RMB + taxes + fuel surcharge (at the time of writing this FR, of course).

It is not a major airport: this is the exhaustive list of the thirty domestic flights that day, in three screen shots,

… but the resulting web of theseroutes is nevertheless impressive (thanks to gcmap.com) 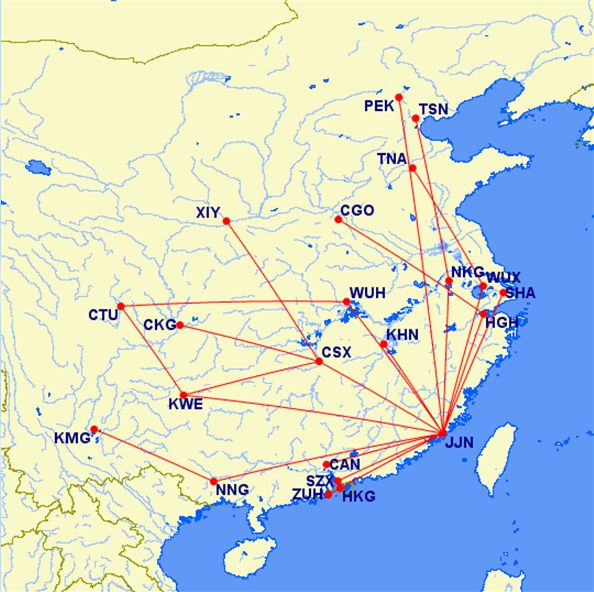 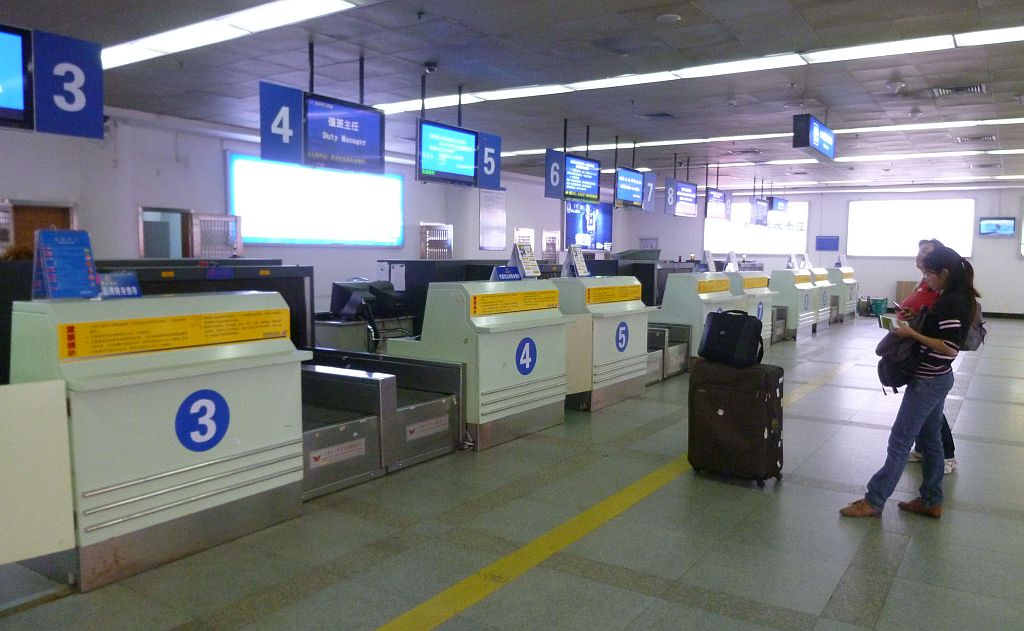 At 16:25, two Chinese on the left will pass me, because the counter on their side opens. In the foreground, this Chinese girls is actually a tour guide: she holds a thick pile of white credit sized Chinese IDs, and also an unexpected green travel permit delivered to a Taiwanese (Mainland China and Taiwan do not recognize each other's passports, for political reasons, and deliver travel permits to avoid giving credence that each is really an independent country). 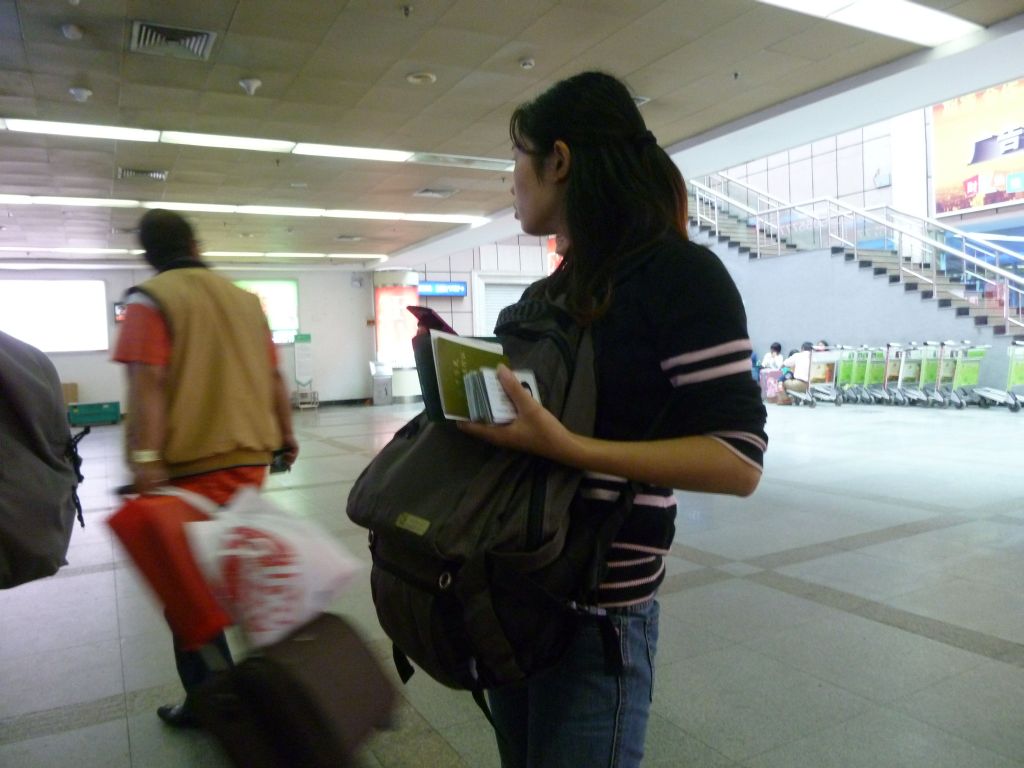 There were a little more people Somewhat later, but you would not call it a rush.

The landside area is quite wide. The steel seats that I already saw in other Chinese airports are acceptable for an hour, but I have painful memories of waiting for three hours on a similar seat after landing from an international flight, until check-in for a domestic flight opened. 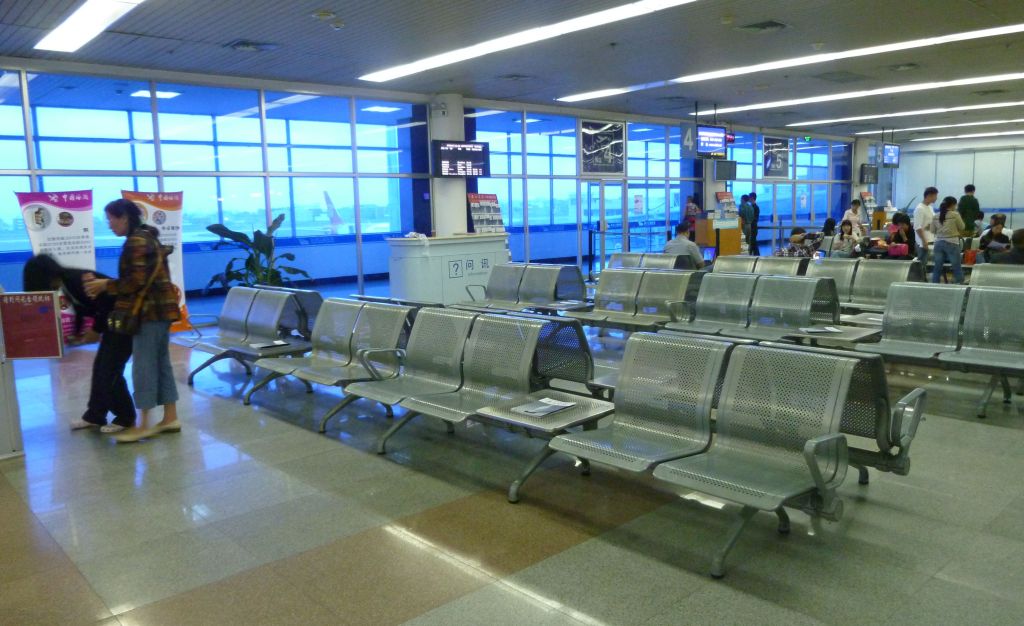 This is not the result of some wild Photoshop experiment: the windows are really blue, and even deep blue, which strongly reduced plane spotting possibilities.

There were few planes, anyway. Too bad for the departing Sprint Airlines aircraft. Note how close the buildings are on the other side of the runway, even more so that there is no taxiway.

Boarding was a quarter of an hour late, without any explanations, and once passengers were on board, we waited at least another quarter of an hour. It was dark by then, and I could do no better than this picture. 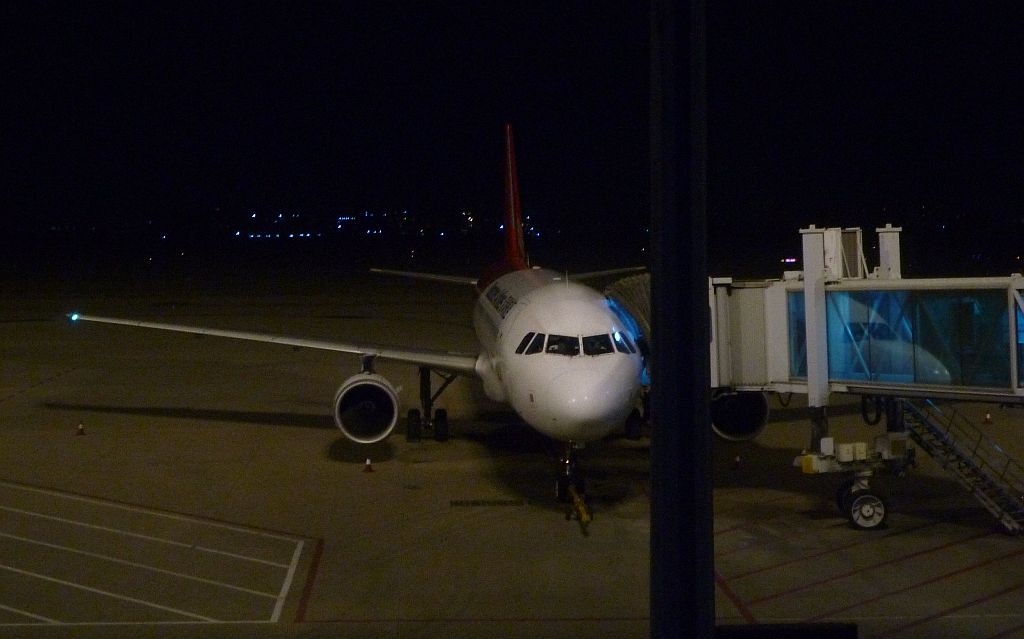 The cabin is extremely commonplace : two 2+2 rows in business class (photographed when leaving the plane) 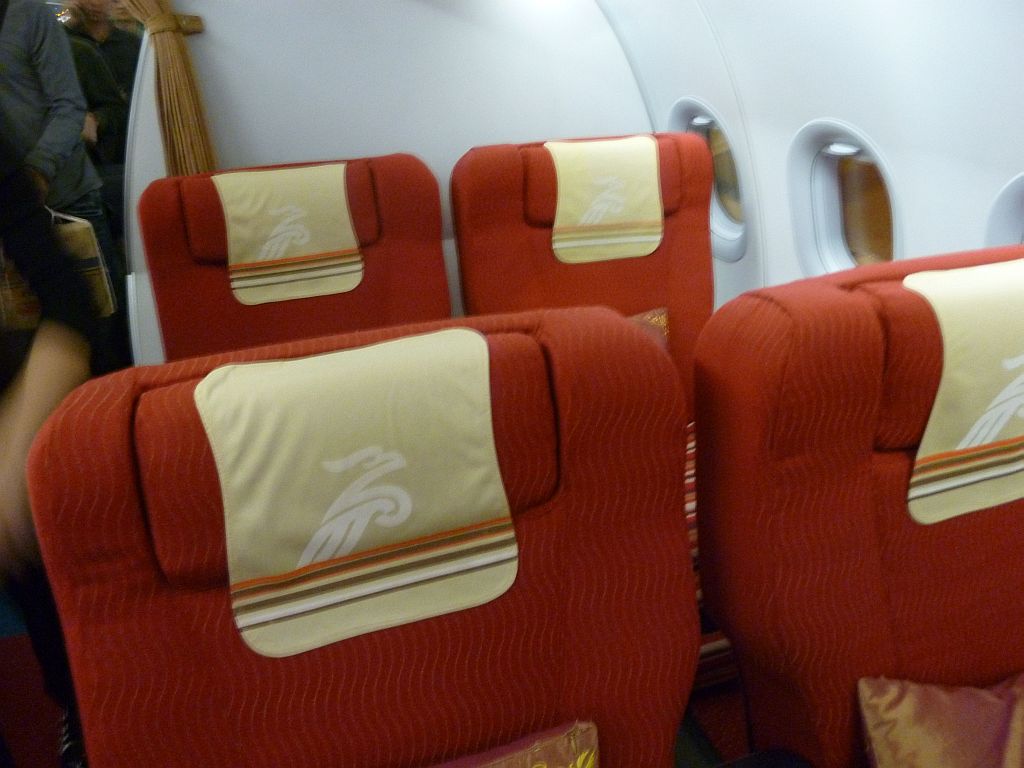 And economy, with a 3+3 layout

Safety demonstrations were entirely on the IFE, with English and Chinese subtitles. Chinese subtitles are very common in Mainland China, especially on TV. This is because the Chinese languages have the unique peculiarity of being quasi-identical in written form, but mutually unintelligible in oral form. All schooling is in Mandarin Chinese, but many Chinese citizen are less than fluent. I had several cases of waiters in restaurants who understood no Mandarin, and needed the improvised help from a customer to translate from my Chinese to her Chinese.

This flight is from Jinjiang, in the province of Fujian where many people speak minnan or hakka, towards Quangzhou (Canton), where people usually speak Cantonese. I understand nothing of these languages, although I often hear the two former in Taiwan, in particular in the subway where stations are announced in Mandarin, Taiwanese (a variant of minnan), hakka and English. 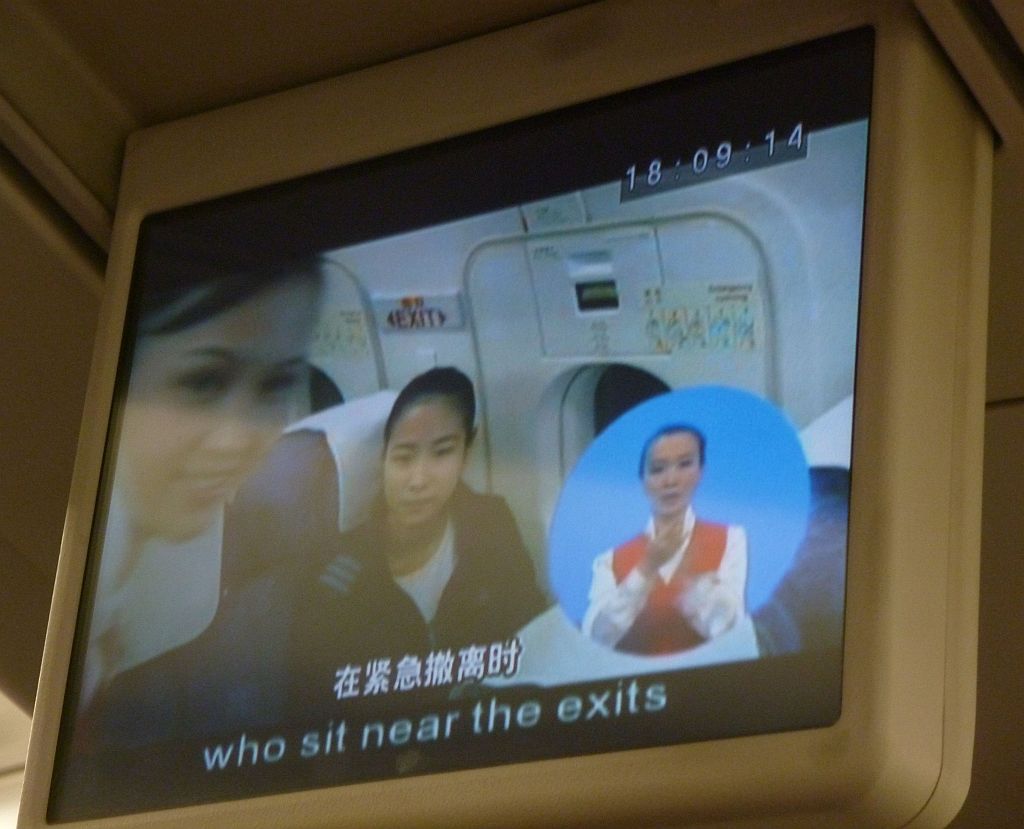 Sign language is actually quite universal. A teacher in a school for the deaf, who was used to international conferences, told me that it only takes two days with local people to master the local sign language variant. Sign language, not English, should be the international means of communication… with a video link in the case of air traffic control !

The distribution of the meal was a remarkable commando-like operation by the four flight attendants, with amazing coordination which did not exclude smiling, delivering in a single pass the dinners and a 330ml bottle to each passenger. 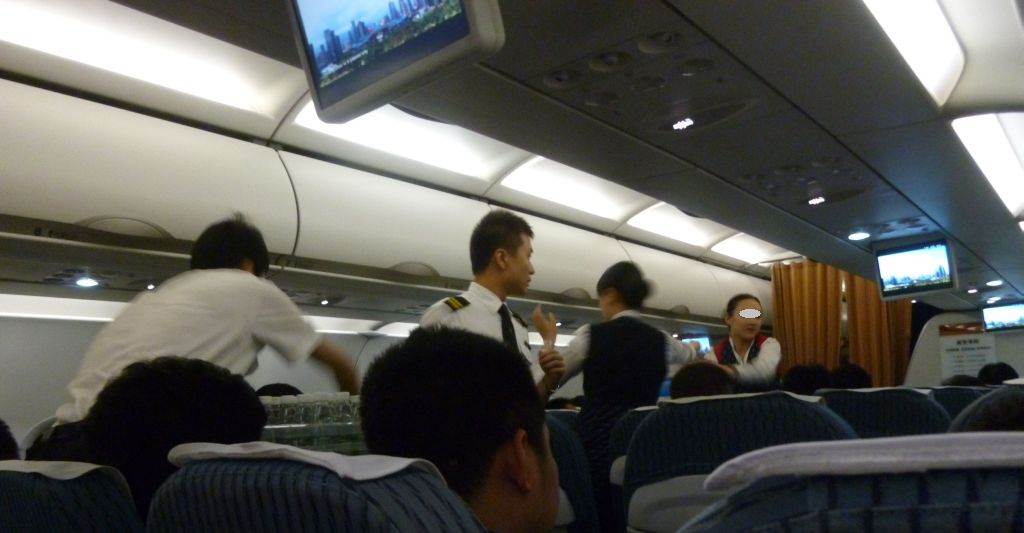 Sweet or salty? Shenzhen Airlines gives both, and a bottle of water whose brand always draws smiles from French speakers. 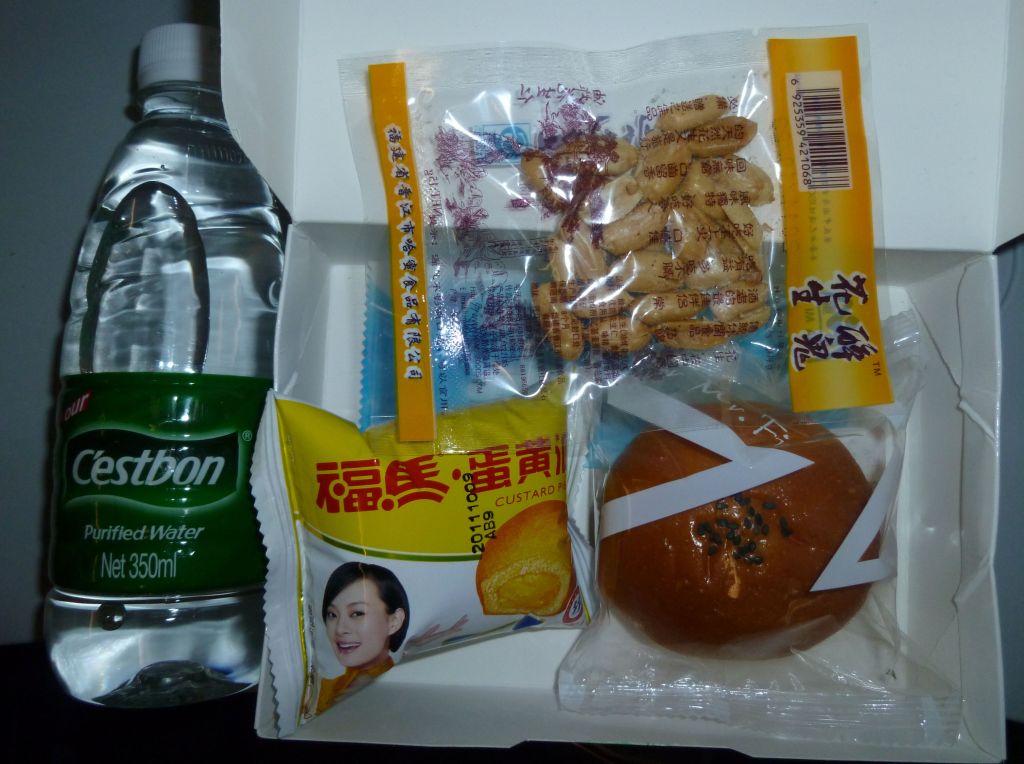 Cestbon (C'est bon = It's good' in French) is the dominant brand in Sichuan; I drank dozens of bottles of the stuff on construction site in Chengdu. It has a fair market share in Guangzhou too.

The refreshing towel, bearing Quanzhou Jinjiang Airport's name, displays the long term hope that it may welcome one day an A380 on its tarmac.

The IFE show a pot pourri of Chinese comedy, an American cooking program and whatever else. Meanwhile, the flight attendants took refuge in the galley, where I guess they ate a quick dinner. But no problem, they reappeared at the beginning of the descent to gather all the rubbish. 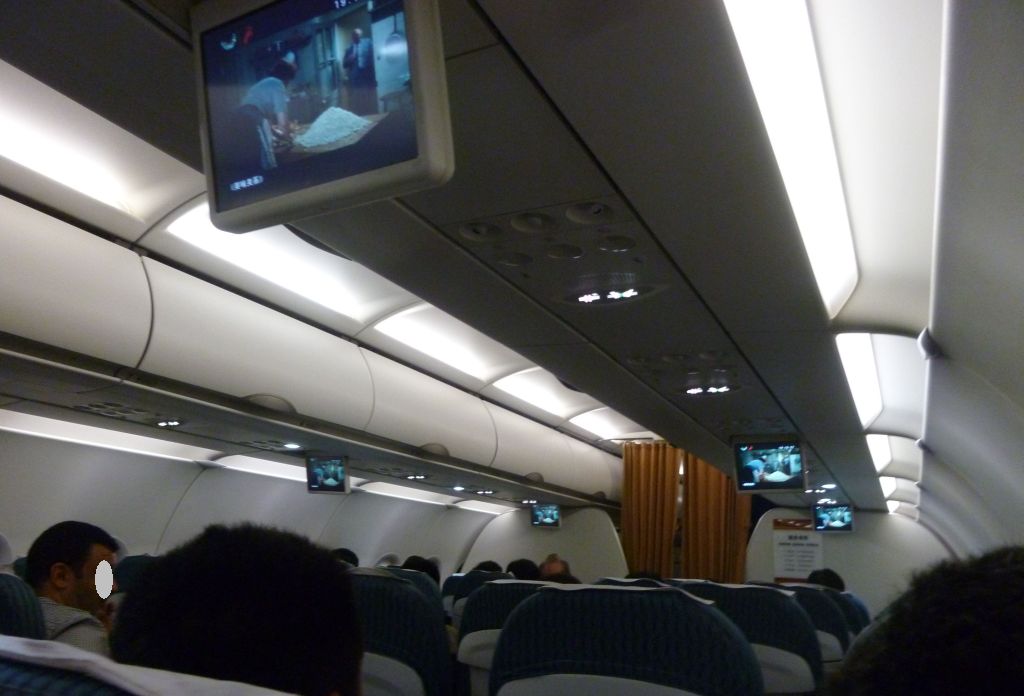 Landing 30 minutes late in Guangzhou, next to a rarity: a Chang'an Airlines 737. Chang'an is the ancient name of Xi'an, the former imperial capital, which is so famous that it gives its name to the avenue which separates the Forbidden City from Tian'anmen Square in Beijing. But that airline only as four aircraft; it is another airline in the Hainan Airlines group.

With all the reflections on the windows, this is the least bad picture of a Shenzhen Airlines aircraft that I managed to take that night.

A 75 minute flight does not give much opportunities for marvels of gastronomy in economy, and there was not even the choice of beverages. This may have been the Chinese domestic flight which was closest to the fare in a French domestic flight.