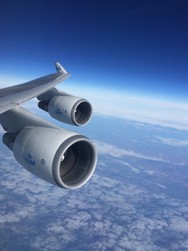 #34 out of 80 Airlines A minimum of 10 flight-reports within the past two years is required to appear in the rankings. 965 reviews

After a really wonderful week in one of the prettiest cities I have been, time had arrived to leave the city of New York. After some delay caused by the subway (maintanance work I guess) I arrived on-time at Jamaica Station, from where I took the AirTrain to Terminal 4, a 10-minute ride. 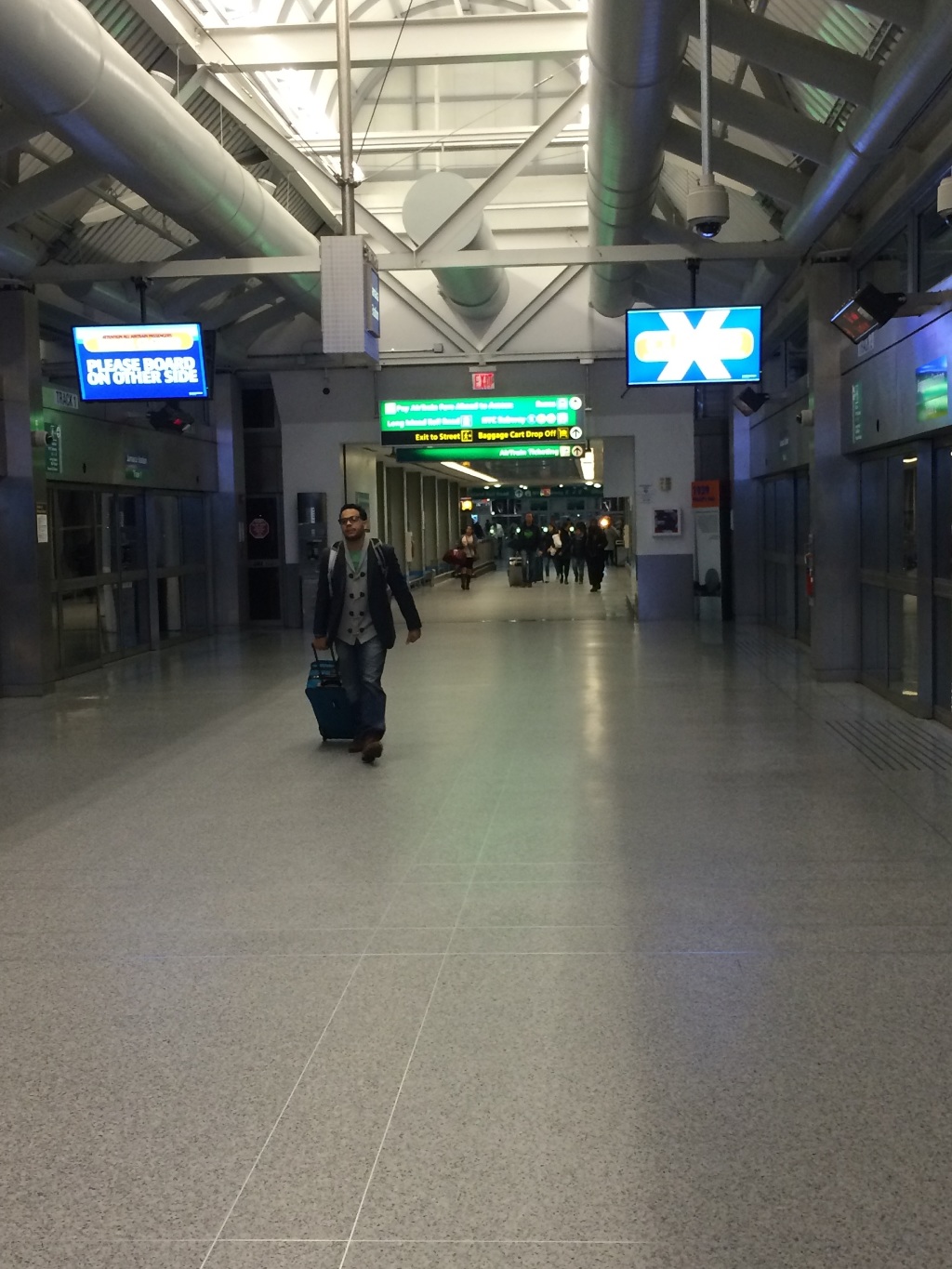 A short walk down and up the stairways brought me in the departure hall of terminal 4, which was really quiet at the time I arrived (around 20.30, 2.15 hours before my flight would actually depart). Since I already checked in online, I only needed to drop-off my suitcase, and at KLM/Delta's check-in counter I obtained my boarding pass, dropped my suitcase, went straight to the security checkpoint, and within 10 minutes I was standing 'airside' already! Americans can work sufficiently… ;)

Time to explore the airport behind the security checkpoint then, since I still had 1,5 hour before boarding. 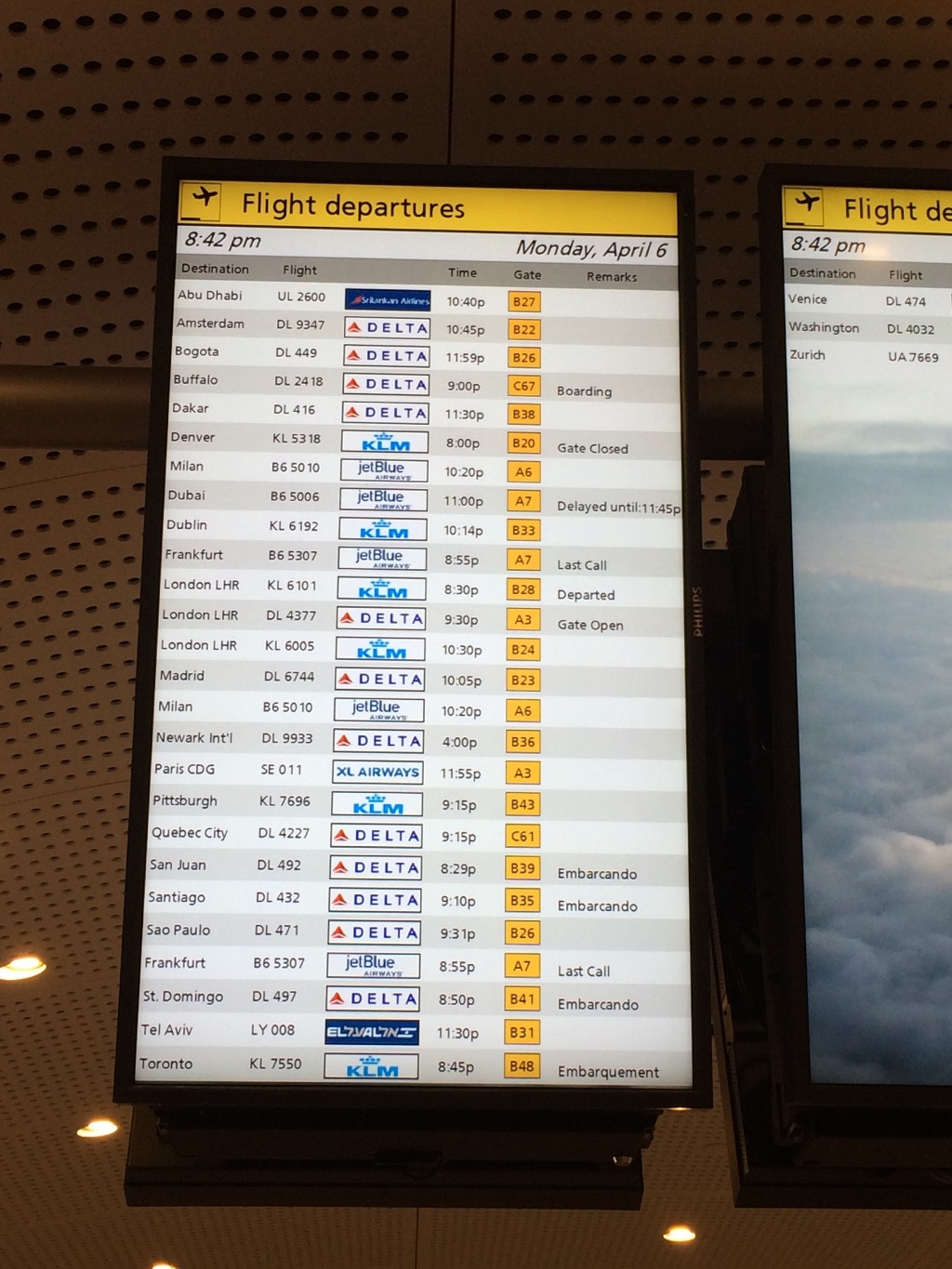 First checking out my flight on the monitors, my flight would depart from gate B22.

Terminal 4 offers a lot of bars and restaurant, some shops but not quite a lot. After a short walk I decided to sit down somewhere, and spend my last Dollars to a Belgian beer (which costed me by the way $12, but I enjoyed it while watching a baseball game and a chat with some Dutch passengers that were on the same flight as me). 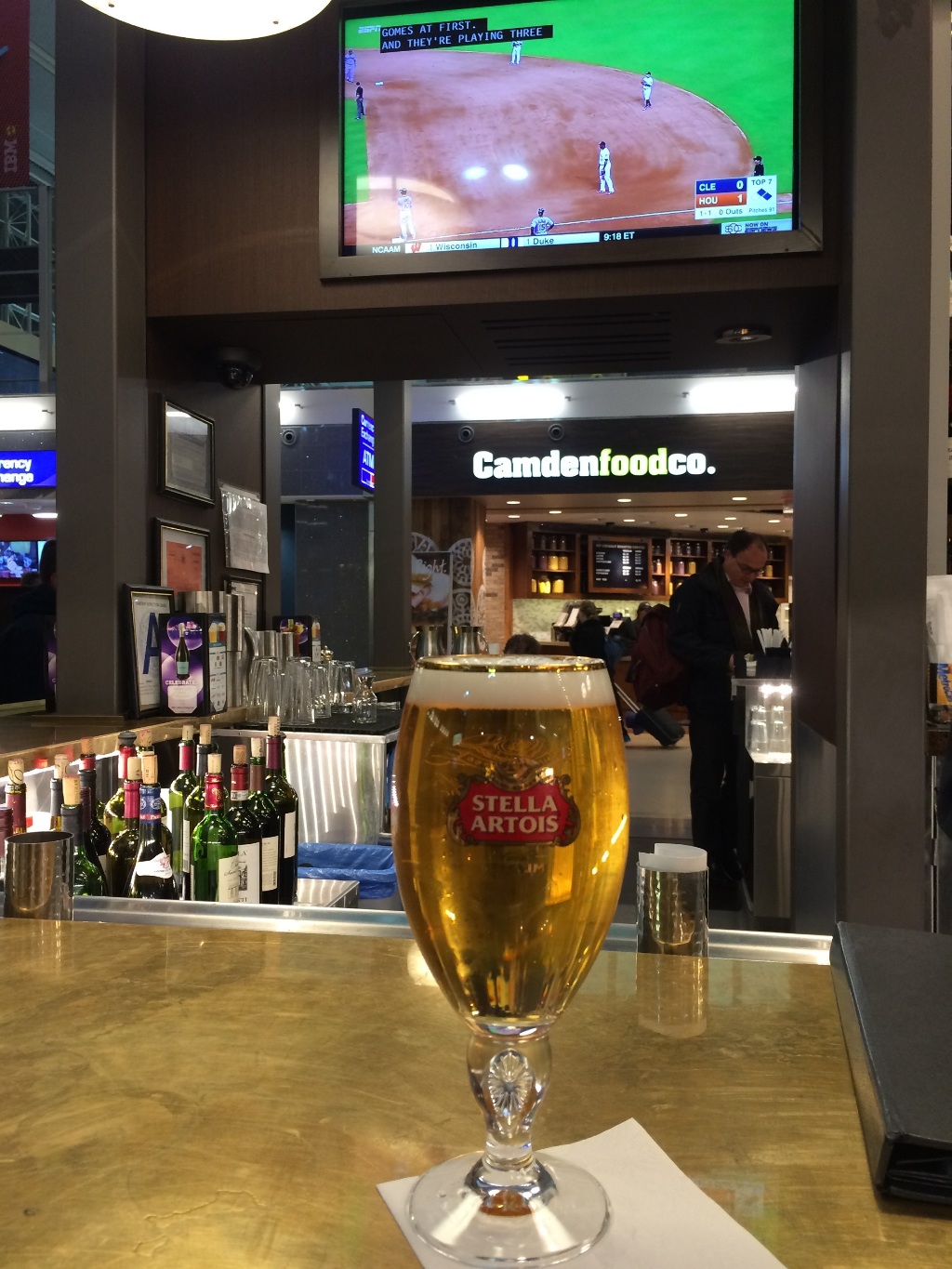 Time to head to the gate, B22, where the 'Queen of the Skies' already had arrived. 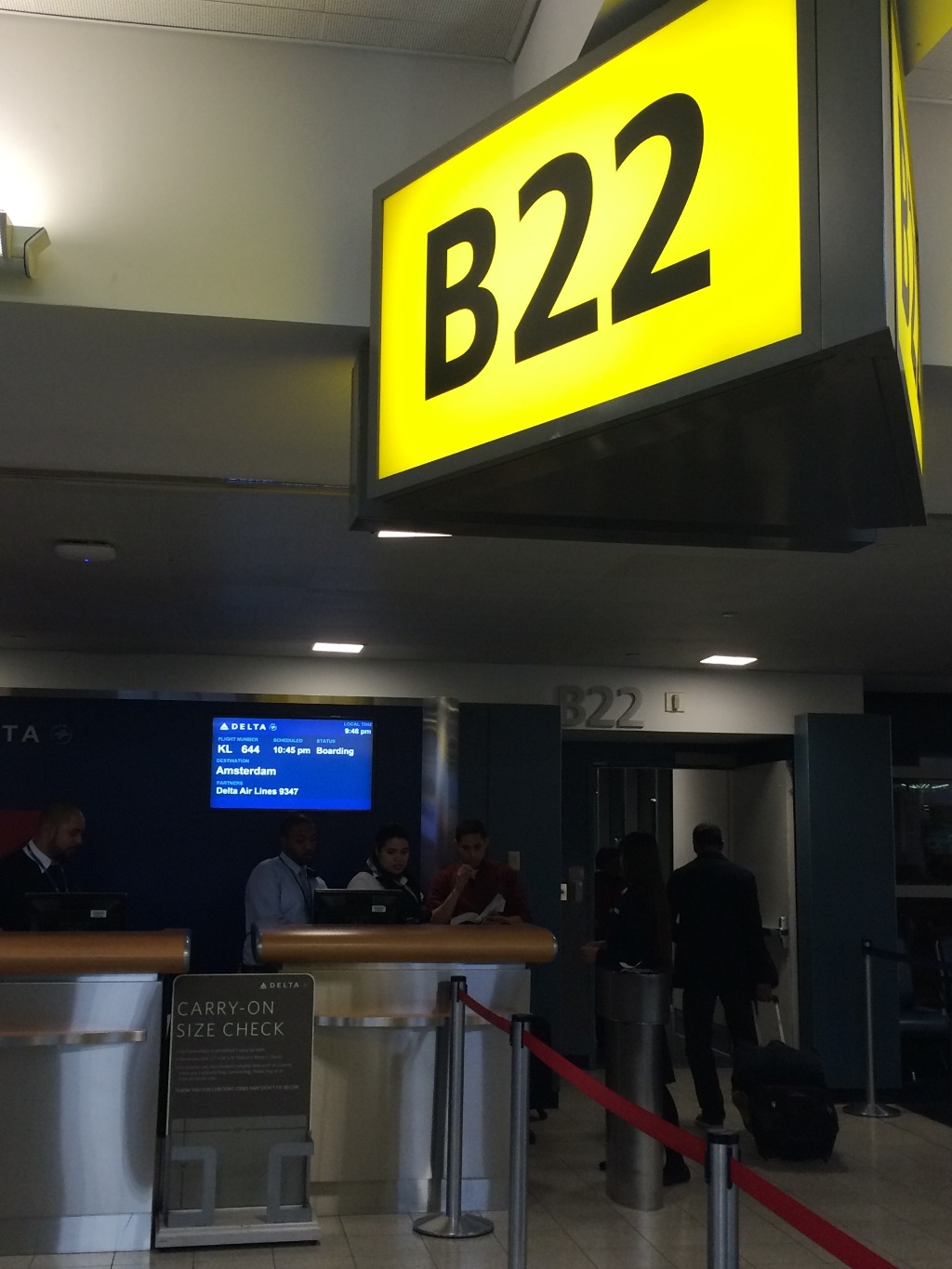 At the desk, upgrades to the World Business Class (WBC) where sold for 'only' $849, I thankfully rejected the offer since I already had obtained an Economy Comfort seat and the legroom should be sufficient enough to have a few hours of sleep during this night flight.

The beautiful Boeing 747-400 PH-BFD (Mixed Configuration, so both Passengers and Cargo), nick-named City of Dubai, would fly me back this night towards Amsterdam. 'City of Dubai', PH-BFD, would bring me back to Amsterdam.

I managed to select a window-seat in Economy Comfort, and I chose seat 14A. 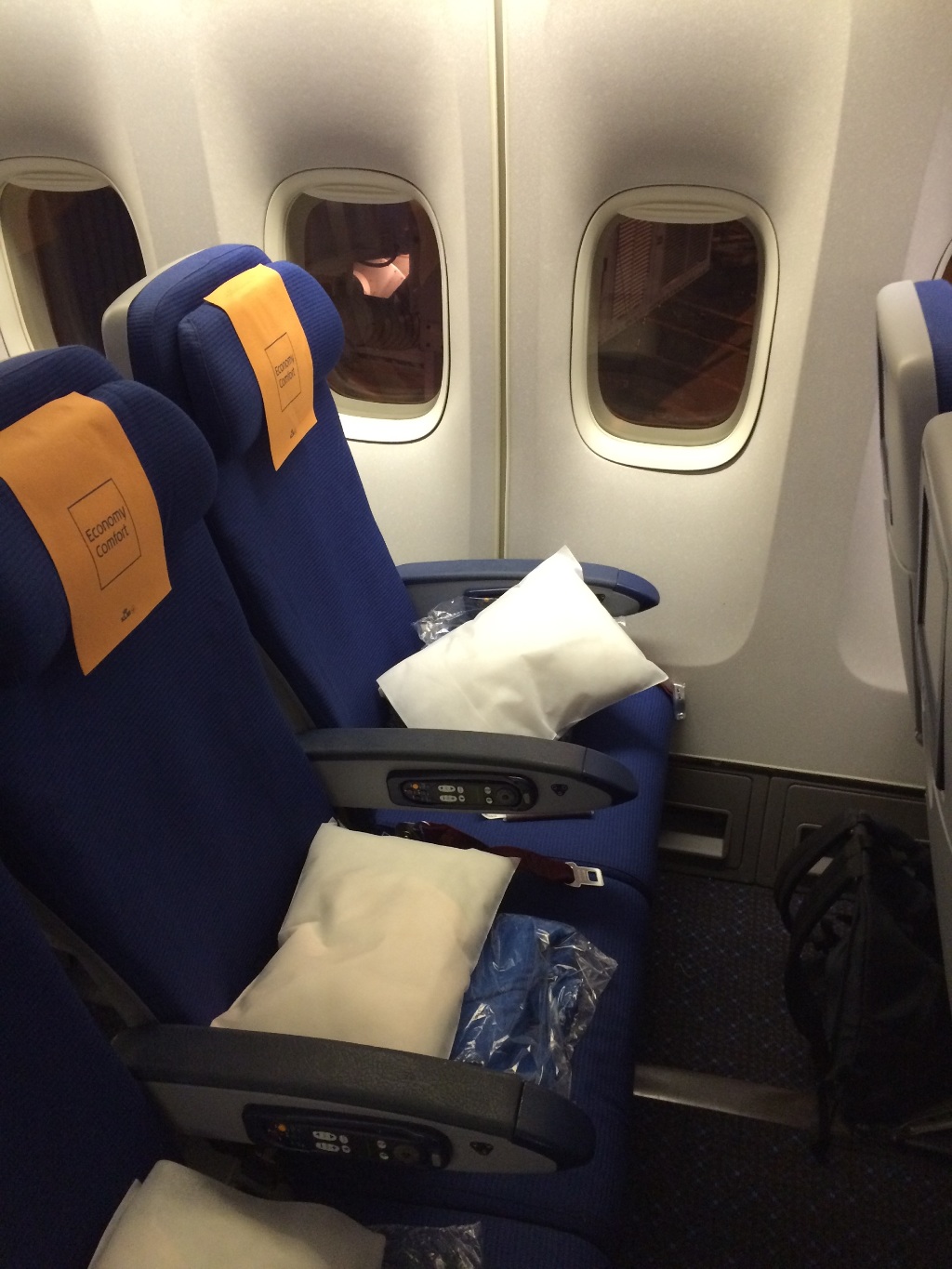 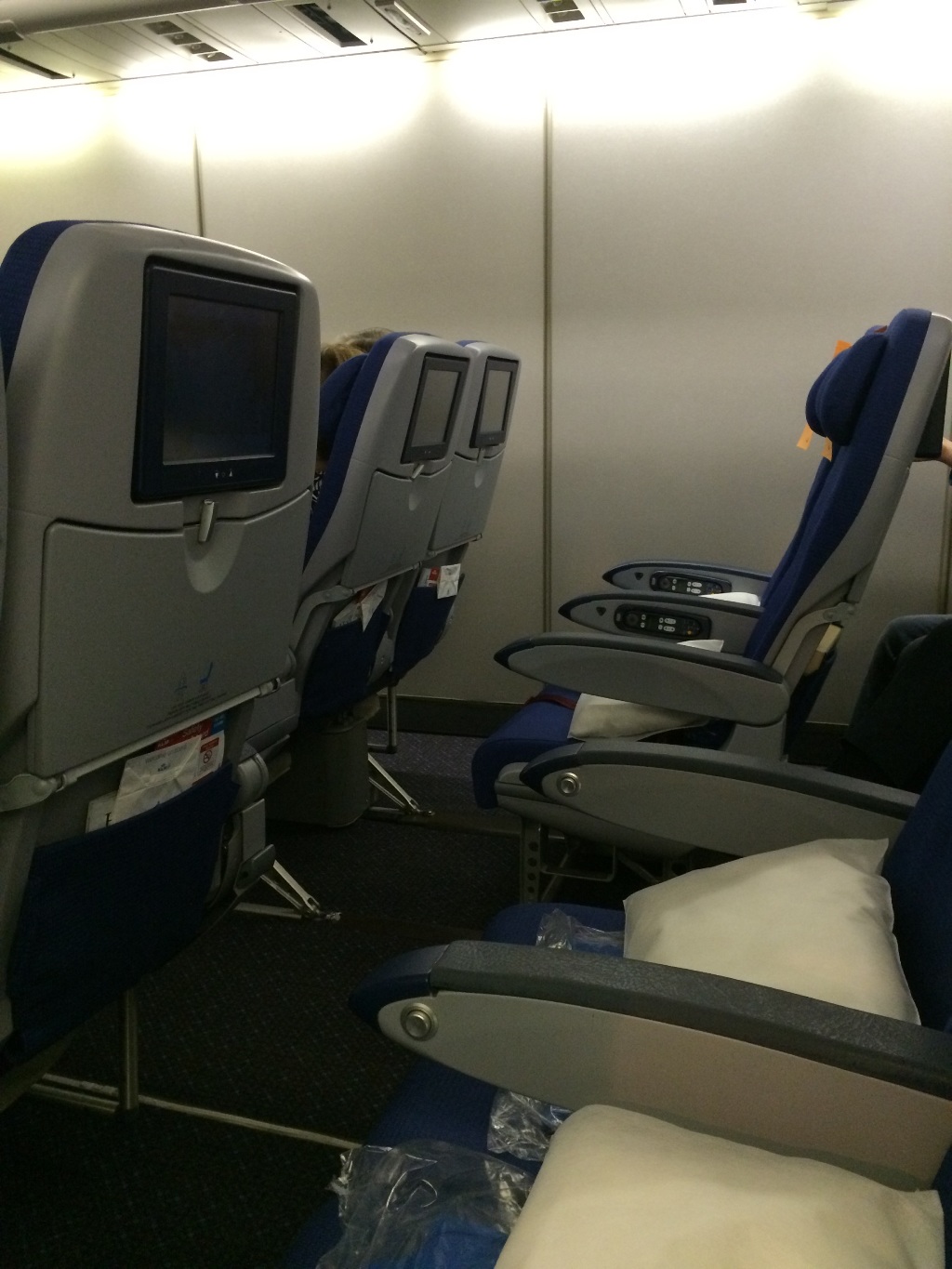 View on seats 14BC and 14DE, the last ones next to the kitchen, but did not hear any sound from there during the entire flight! The obligatory legroom-shot, plenty of legroom for a 6,5 hr flight.

After a fast boarding process, everyone had been boarded 22.30, 20 minutes before actual departure. The aircraft was pushed-back round 22.35, but it took 20 minutes to arrive at the departure runway and we got airborne around 22.56. A check on FlightRadar24 to see if the aircraft already got visible ;) 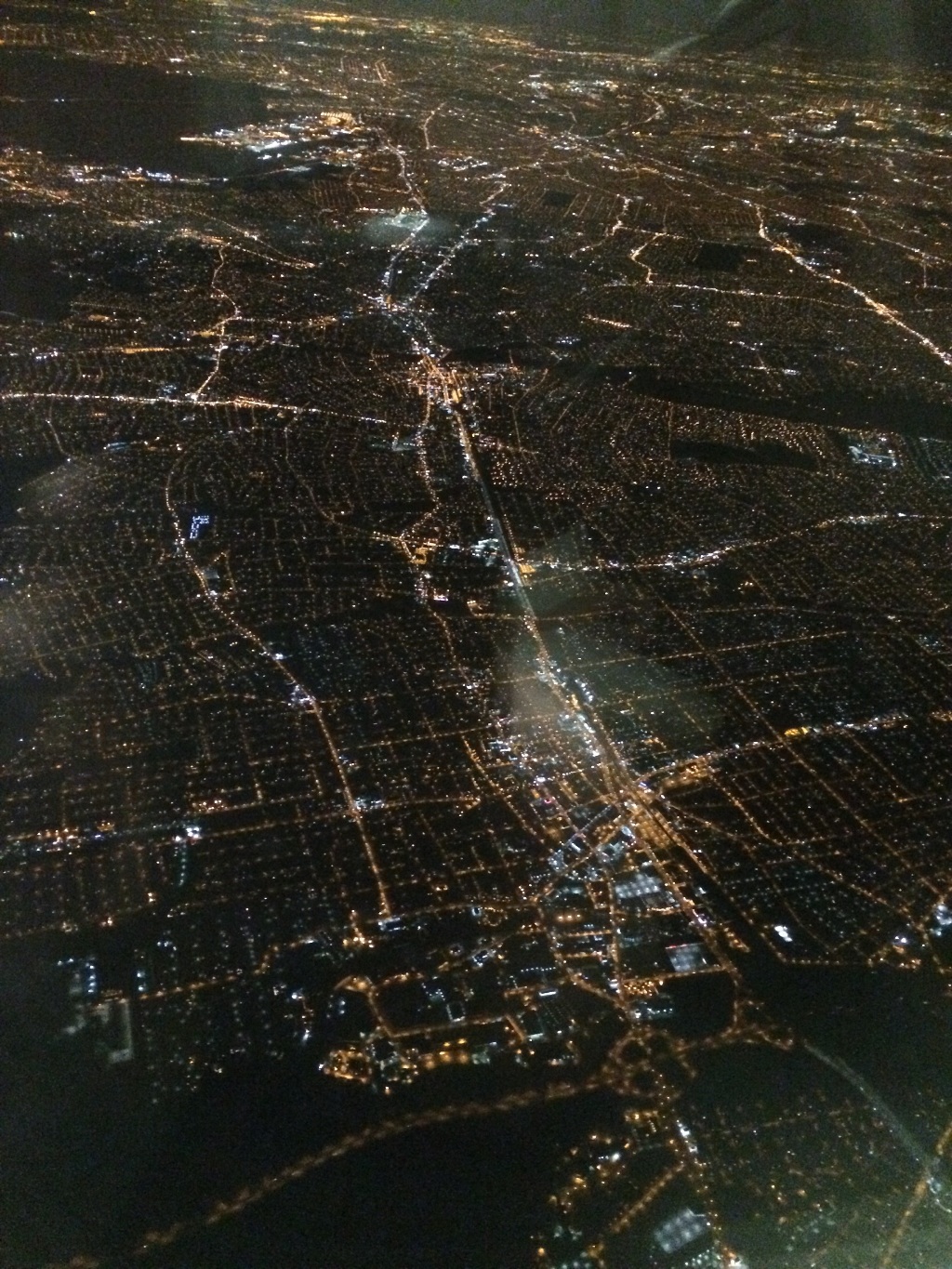 Twenty minutes into flight, the crew came by with some drinks and a small bite. 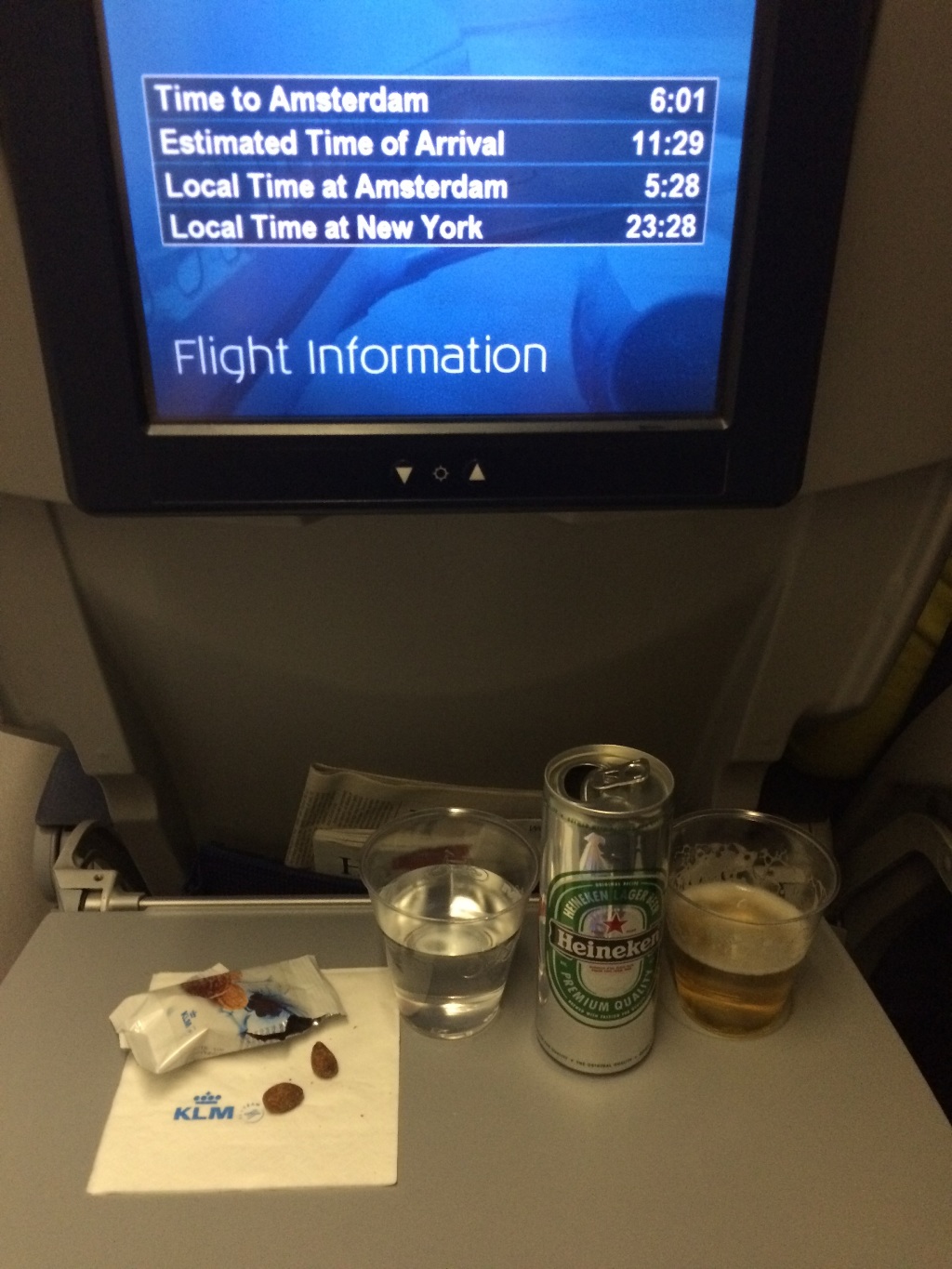 I chose a beer, and the well-known nuts.

Approximately half an hour later, dinner service started, again the choice between pasta and chicken. Since I already had the pasta on the way towards New York I decided to pick the chicken this time. Chicken as 'dinner', accomplished with bread, salad, and a sweet cake-like desert, it all tasted pretty nice!

Before lights were dimmed, coffee/tea and a liquor were offered for the ones that were not already sleeping. Coffee and Amarula liquor before getting a short sleep. At the moment flying over Canada we where flying quite fast ;)

After this last view on my screen I switched it off, went to the bathroom, after which the lights were dimmed (around 2 hours into flight) and I tried to have a sleep.
I managed to have a (light) sleep for 3 hours! :)
Shortly after I woke up, crew started breakfast service, nicely timed I would say. :) 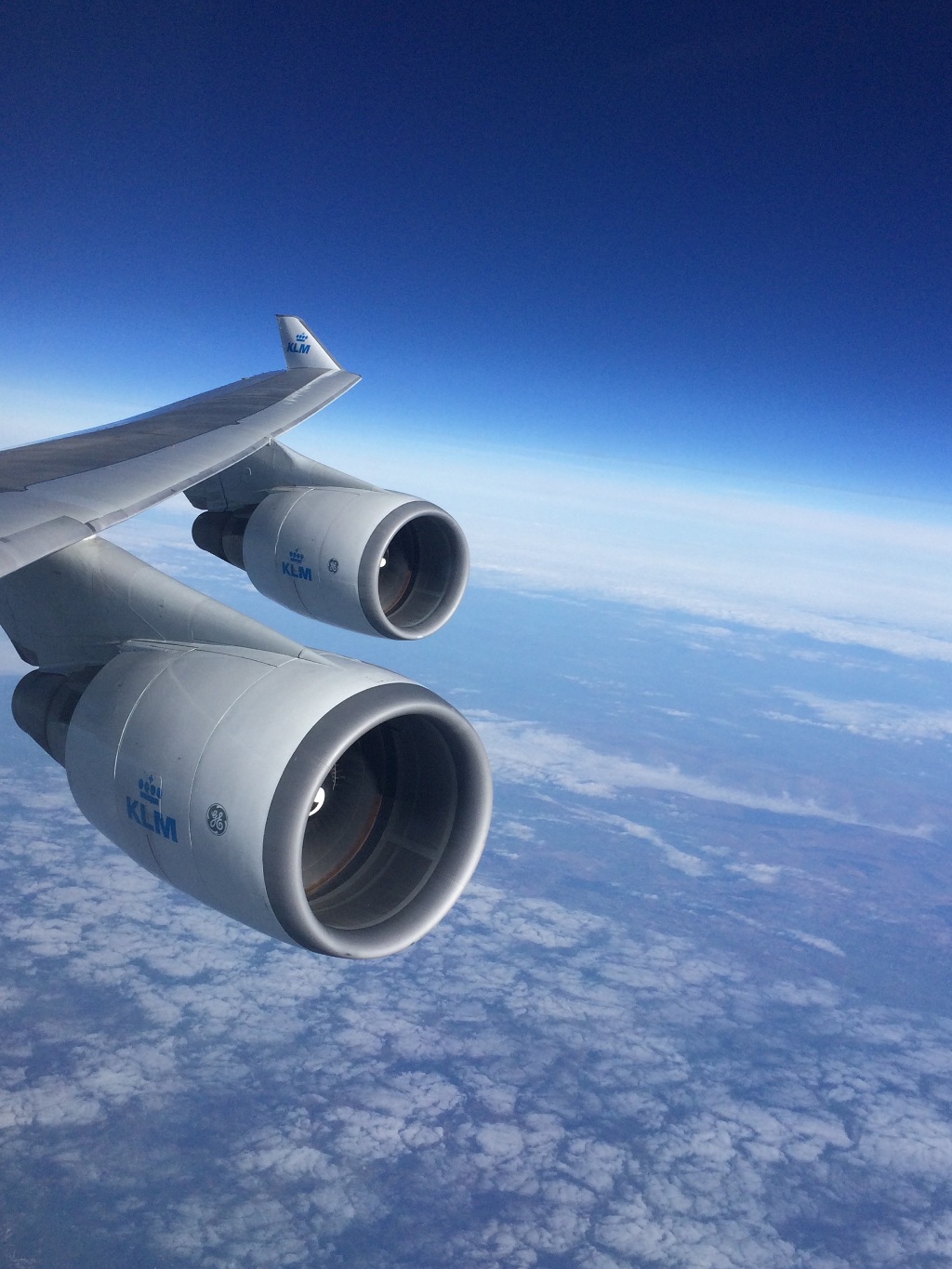 Woke up with the view, really loved it! 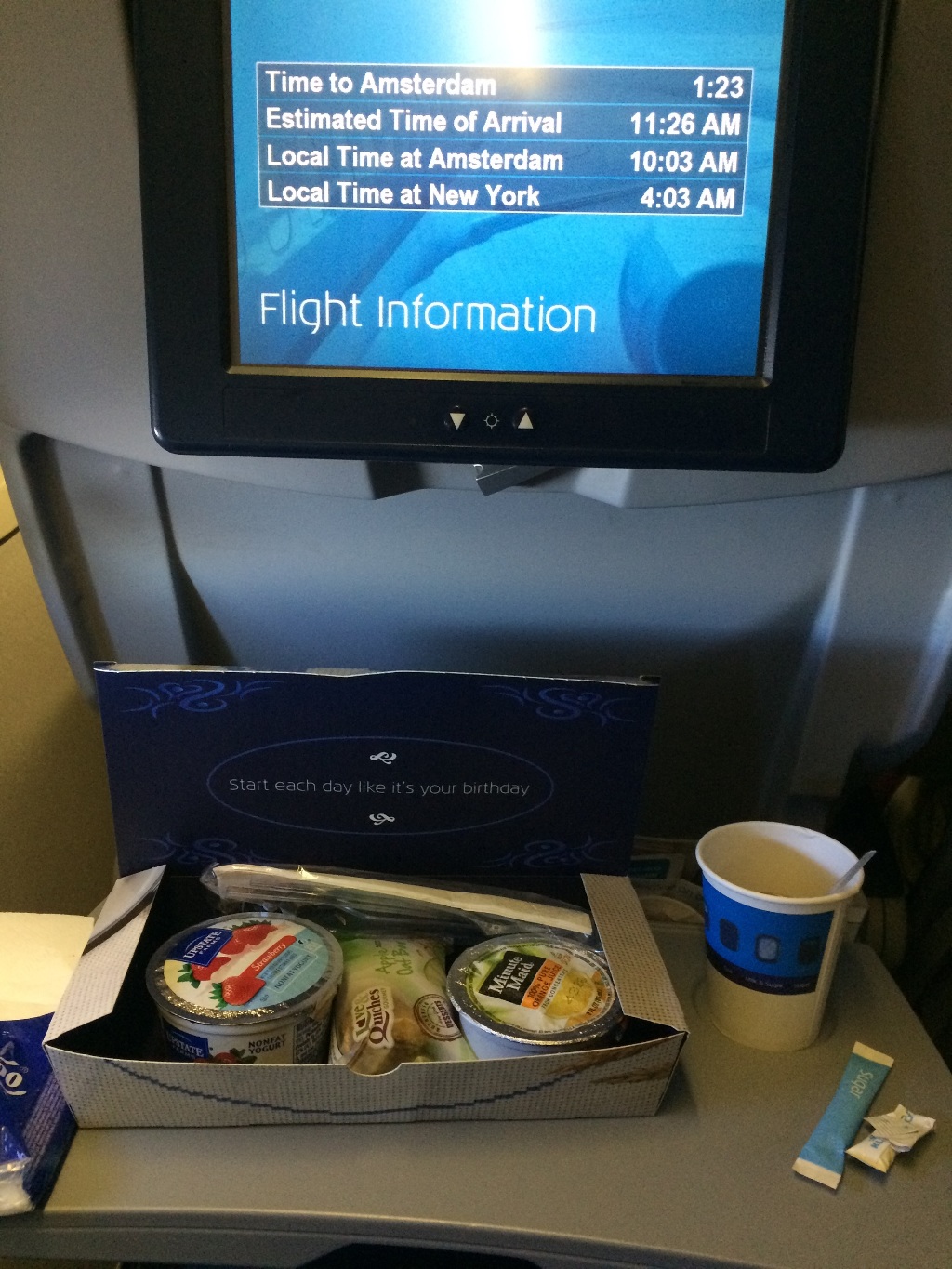 Breakfast this time consisted of orange juice, strawberry yoghurt and a sweet-tasting apple bread-cake thingie (hard to describe this :P), accomplished with a cup of coffee. I enjoyed it at least, since I don't at a lot for breakfast usually and this was definitely enough for me. While having breakfast we passed the UK, offering nice views. 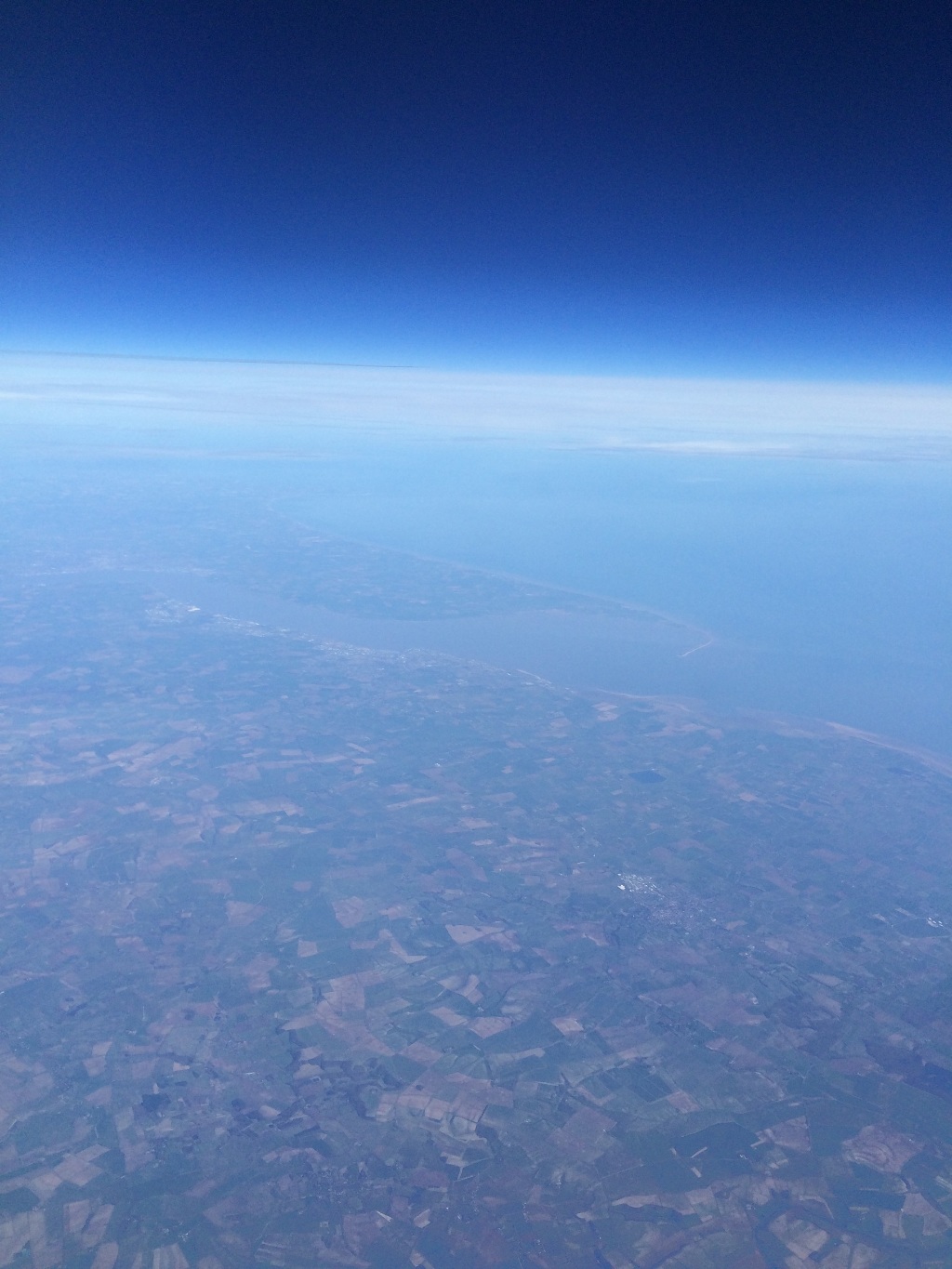 View on the eastcoast of the UK before heading to the Netherlands. Approaching the Dutch coast, a last view on the flighttracker on my screen. 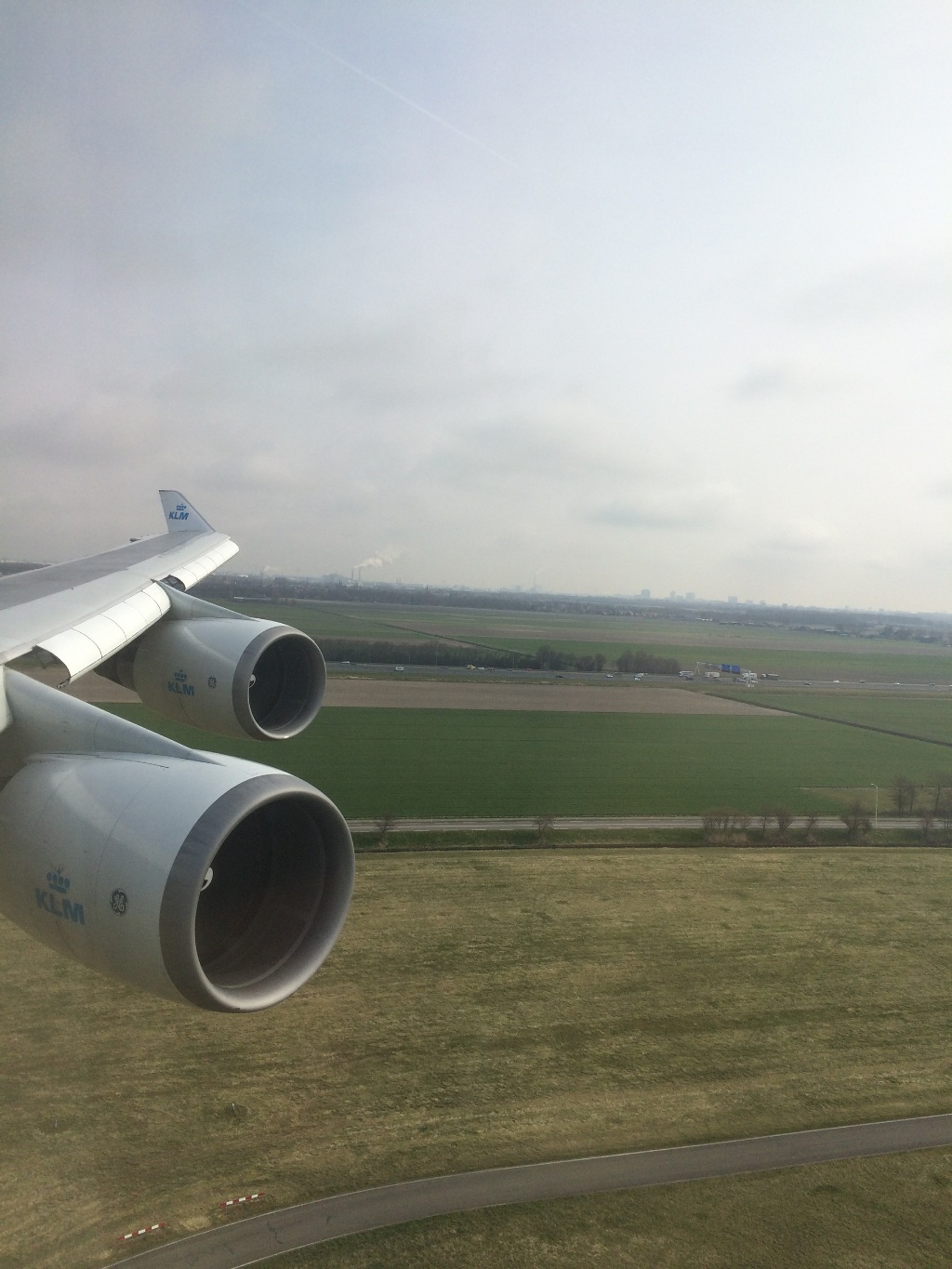 Shortly before a smooth touch-down on one of Amsterdam's runways. 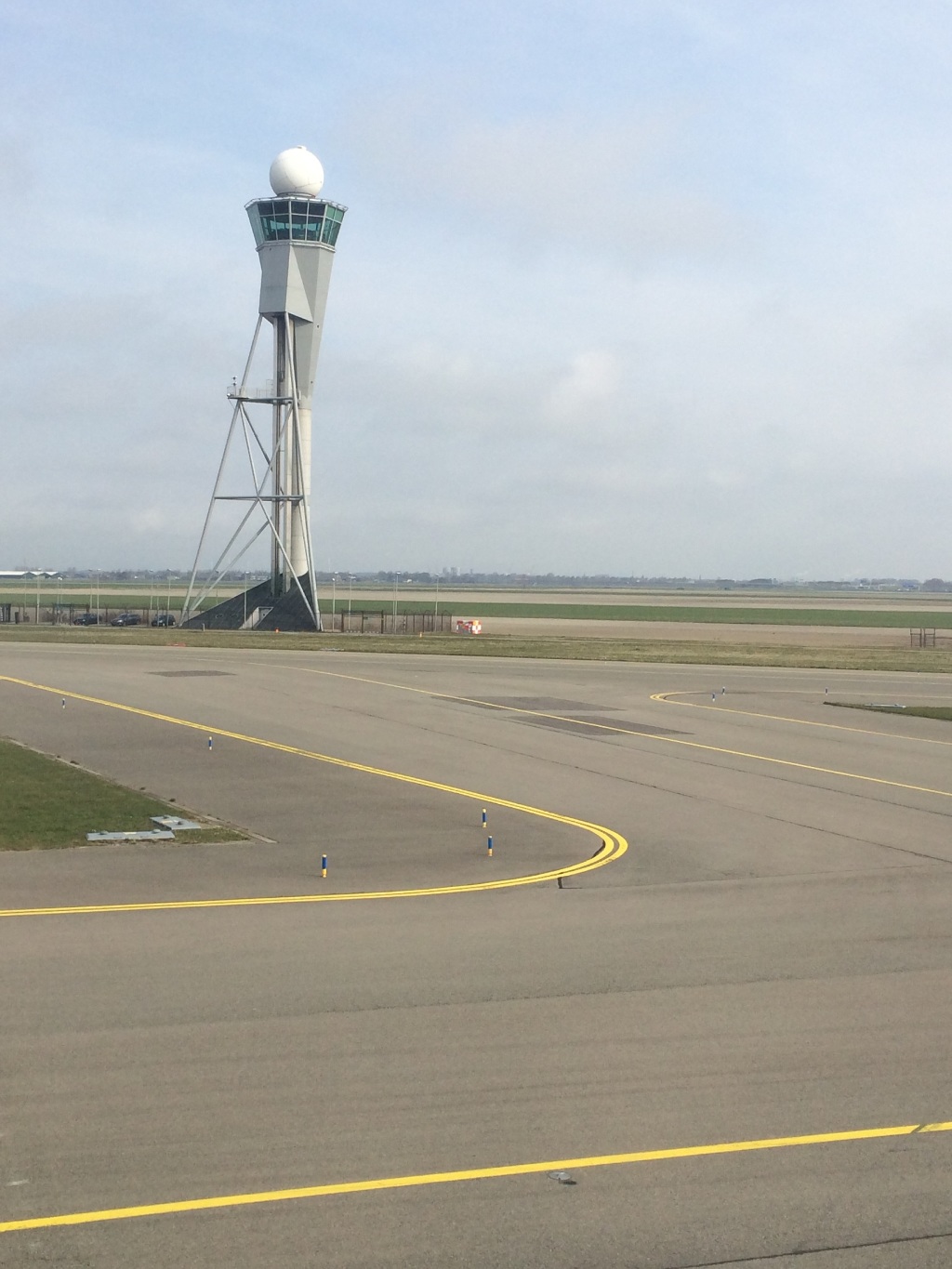 Last view on the tower of Schiphol's famous Polderbaan.

We touched down at 11.27 LT, 40 minutes ahead of schedule on Schiphol's famous Polderbaan, after which it usually takes a 20 minute ride to the gate. Because the 747 is large aircraft and has a higher speed we arrived at the gate after some 10/12 minutes luckily. Tracking the flight on my phone via FlightRadar24 after being landed.

Finally back in town, and since I only had a short sleep I decided to sleep for some more hours when I arrived at home :)

Thanks for reading this report, comments are always welcome and appreciated!
See more

Overall a nice flight again back to town with KLM. I appreciate the crew's friendly attitude towards passengers and they work hard to please everyone on board. On this night flight I also liked it that light were dimmed to give everyone the opportunity to have a sleep, but I believe that is a common thing during night flights. The entertainment system is a bit old compared to the newly installed IFE I used on my flight towards JFK a week before on the newly refitted B772. The IFE on this B747 does not offer a touch-screen, but has a 'controller' in the arm of the chair, and the screen is not that bright compared with the new ones. However for a night flight, you can survive with such a screen, but if you would have a day flight I would recommend a B777 over this B747 then ;).

danny_89 is member of Flight-Report since February 2015.