#36 out of 79 Airlines A minimum of 10 flight-reports within the past two years is required to appear in the rankings. 1004 reviews

By danny_89 3074
Published on 2nd February 2015
After 5 pleasant days in Lisbon with terrific weather (30 degrees Celsius and sunny) time had arrived to head back to cloudy Holland.
We had chosen for the afternoon flight (KL1696, STD 11.40) so after an early breakfast, and a half-an-hour metro-trip we arrived 2 hourse before departure at the airport.
I already checked in via the KLM-app on my iPhone, and printed the boarding passes at a self check-in counter, and within 5 minutes we also delivered the luggage at the baggage drop-off desk. After having a coffee and a last moment of enjoying the warm Portuguese sun outside the airport terminal we decided to go through security, which in fact went smoothly and quite fast.
We had left an hour or so for boarding so checked out the after-security facilities: lots of restaurants and shops, especially one big duty-free shop! Monitor showing the flights that would depart this late morning / early afternoon.

Then we moved to the gate, Gate 116, and as a surprise I saw the KLM retrojet, a Boeing 737-800 with registration PH-BXA just coming in! What a nice surprise to fly the only KLM aircraft in retro colors, simply beautiful! 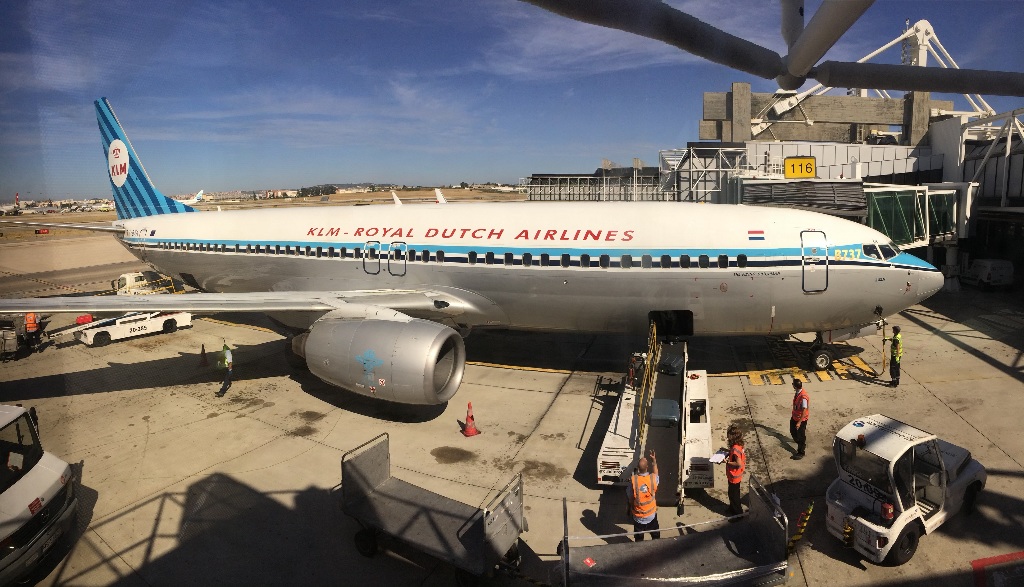 The PH-BXA, called 'Zwaan' (Swane) KLM's only Boeing painted in retro colors because of the 90th anniversary of the airline.

Boarding went a little chaotic, first some Elite-plus members but also some 'regular' passengers thought the might get boarded, but after 5-10 minutes general boarding started and after 20 minutes everyone had boarded the plane on time. Last view on the aircraft before I boarded the plane.

Departure was expected to be on time, but at the time of departure the captain entered the cabin and announced that there were some problems regarding the radar control in Northern Spain, which was not functioning and departure had been delayed for 2 hours, but everyone needed to remain seated in case the radar problem would be solved so we could depart immediately.
Luckily after half-an-hour of waiting cabin crew closed the doors and we departed quickly from the gate.

This time I was seated on seat 8E, a seat 2 rows right behind the Economy Comfort zone. Not extremely spacious, but legroom was for me sufficient enough and more spacious than flying a low-cost carrier such as Transavia or Vueling. Legroom on my seat 8E during this 2h30 during flight.

At 12.26LT the PH-BXA took off from runway 03/21 into the sky in a northly direction. After the seatbelt signs went off, cabin crew started serving drinks accompanied with a 'delicious' hot snack. My hot snack accompanied with a nice Heineken beer.

The snack, which this time included a Semoia panini with roasted veggy and turkey, was warm and tasted quite good for a hot panini! As a drink a chose a beer, since it was the end of my holiday trip I wanted to enjoy every single moment! :) View out of the window.

An hour before landing the crew came by for a second time offering coffee, tea or water and a small biscuit.
After an uneventful flight we touched down at 15.47LT on Schiphol's Polderbaan (runway 18R/36L), a 15-minute taxi-ride to the gate left, in which we passed the Airbus A380 from Emirates that was about to depart. Emirates Airbus A380 on Schiphol.


We arrived at 16.03LT at gate B31, in the end only a 20 minute delay because of the radar failure.
In the meantime I already followed our aircraft on Flightradar ;) Overall we had a nice flight back home with KLM, and I am a satisfied customer flying KLM because of the in-flight service they provide on these intra-European flights and the price I paid for (about €170 for a return ticket, which is in my opinion a really good deal for a flight to and from Lisbon).

The contributors of Flight-Report published 7 reviews of 4 airlines on the route Lisbon (LIS) → Amsterdam (AMS).

The average flight time is 2 hours and 52 minutes.

danny_89 is member of Flight-Report since February 2015.