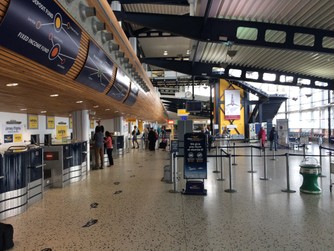 Here's the report of my short hop back to Southampton from Guernsey.


This time I flew with Europe's largest region airline - Flybe! This was simply do to the price and time of flight (and maybe just a little bit about being more interesting to fly with another airline I had never flown before :P)

I arrived a little later than planned as it seems taxis in Guernsey are more difficult to find on Sundays. There are also buses to the airport from the main town - St. Peter Port. I was told these run every hour on normal days, but not sure about Sundays. The taxi dropped me off directly outside departures and due to the rainy weather I didn't take a picture of the terminal from outside, but here is the check in area. I hadn't checked in online this time so had to go the the desks to get my boarding card. There was only one person in front of me so I got my card in no time. Security, like in Southampton, comprised of just two x-ray scanners, but due to the small planes in use this also proceeded quickly. The departure lounge is one small area with a small duty free shop and a cafe. Departure screens showed all the flights were to either the UK or other Channel Islands, mostly run by Aurigny. Leg room on Flybe was similar to that on Blue Islands, which was ample for the small flight duration. The cabin was also lit with purple lights, similar to that of the newer livery. My plane was however still in the old white and blue livery. In the seat pocket was provided a magazine with the routes operated by Flybe. During take-off we again got a view of the island, however due to low cloud this time this soon disappeared. In contrast to Blue Islands on the outbound flight, this time there were no freebies. Any drinks and snacks therefore had to be paid for. We landed safely in Southampton about 5 minutes ahead of schedule This was a pleasant flight and arrived perfectly on time. The was little difference to that I had on Blue Islands, except for the free beverage on Blue Islands.

I'd fly again with both airlines and will definately look at flying again from Southampton due to the ease of access.