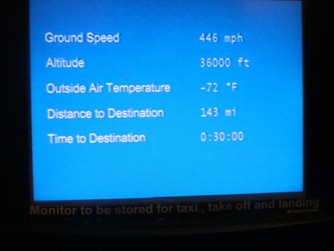 By Jamil_Itani 2165
Published on 24th March 2015
Initially I was planning to stay in Saudi Arabia for a period of 10 days to have my inner peace by visiting the holy places of Muslims in January 2014,

However, after 48 hours of my arrival, I received a phone call urging me to come back to Beirut for a job interview. I immediately approach MEA, and found that the night flight on this Friday is almost empty and will be operated by the airline’s A321 (OD-RMI).

I reached King Abdul Aziz Airport in Jeddah 3 hours before my flight time. I had immediately performed my check-in, and headed to the First Class Lounge (not listed above) which I have access privileges to it using my Platinum MasterCard issued by Banque Audi S I then headed towards the duty free shops to buy my mother her birthday gift. A variety of golden bracelets (24 K pure) can be found. As mentioned earlier, our plane is OD-RMI received by the airline in 2004. This aircraft was later repainted in MEA retro-colors and it is expected to be phased out of the fleet in late 2016, especially when the airline starts receiving its A320 and A321 neo planes. Upon boarding, I took seat 31A which is an emergency exit seat offers a large legroom. Moreover, most of the aircraft seats were empty. The seats of the A321 are still neat and nice despite the age of the aircraft. They have an IFE PTV for each passenger. This flight flies towards north of Saudi Arabia, Jordanian Airspaces, over Syria, then banks west to arrive fly over Lebanese airspaces. As usual, meal offered is extremely generous. I had opted for the chicken choice as I hate fish. My meal is offered with tuna salad, water goblet, cheese, butter, and a large variety of warm bread. My main dish is formed of two chicken breasts cooked in lemon mustard sauce served with cooked potatoes and steemed vegetables. The meal was accompanied by tomato juice, and a cherry tarte cake The meal was extremely delicious and realllllllly yummy. Coffee and tea services followed.

I slept for the remaining of the flight, and didn’t watch any PTV until we reach Beirut. We had collected our bags, passed through Beirut customs, and existed the airport in less than 10 minutes

Another great flight with MEA, however really the staff at Jeddah airport should do something about their attitude towards passengers

The contributors of Flight-Report published 4 reviews of 2 airlines on the route Jeddah (JED) → Beirut (BEY).

The average flight time is 2 hours and 26 minutes.

He wrote 19 reviews about 1 airlines and 6 airports.