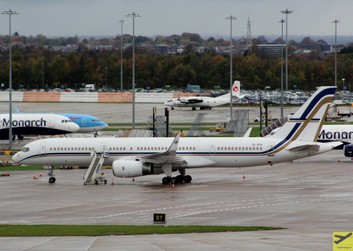 #45 out of 71 Airlines A minimum of 10 flight-reports within the past two years is required to appear in the rankings. 875 reviews

By AviationEagle32 1663
Published on 29th December 2015
Arriving at Manchester Airport - just 4 a half hours before my flight - I decided to go and do some planespotting from level 13 on the top of Terminal 1 Car Park. The weather was mixed but during my stay at the cat park it didn't rain, thankfully. There were some interesting types parked up on the remote stands opposite Terminal 2 including an AN-26 LZ-FLL and a private B757 SX-RFA. Also while I was there the first Qatar Airways B787 at Manchester arrived operating QR45. 3 hours before my flight I decided to head to the Terminal 3 departure lounge. Arriving at Terminal 3 from the T1 car park I made my way to security with only hand luggage. Security was alright, taking about 5-10 minutes which given it was during the low season and so many of the lanes were not open. After clearing security I made my way through the shopping area which like the terminal is quite compact. I grabbed some food and headed to one of the seating areas that look out onto the apron at Terminal 3 and Runway 05L/23R and carried on with my planespotting. About half an hour before our departure time, the departure board instructed everyone to head to the gate. I had discovered that day that I was no longer going to fly on a BA A321 but one of the Golden Dove A319s, G-EUPH. We waited some time to board due to our flight arriving slightly behind schedule. My seat was 15A and I boarded on stairs to the rear of the plane which gave me an opportunity to photograph the tail and get a wing view. Boarding was quick due to half pax, but we still pushed back from stand 18, 20 minutes late. We proceeded to taxi to Runway 23R, which was only a short distance. Takeoff was smooth as we ascended to a peak altitude at 19,000ft. Beautiful flight with the sun setting as we headed to London Heathrow. The interior is pleasant and the seats were very comfy but such would be expected when flying British Airways. A drinks and snacks service was provided but didn't last long as we soon began our descent. Flight time was only about 50 minutes with time on the ground making it about an hour from takeoff at Manchester Airport. Our journey from Manchester took us initially west before we banked left heading south. We passed over Birmingham and the West Midlands. We turned left over Oxford and joined the holding pattern for Heathrow. We circuited it twice before being given permission to continue. As we passed Canary Wharf to the north we banked right continuing in an arc to line up with Runway 27L for our final approach. Finals into Heathrow was quite a steep approach but we touched down very gently which I think was the best landing I had ever experienced. We vacated the Runway and began our taxi to Terminal 5. We were directed to a remote stand, 527. Deplaning took slightly longer as we had to be bussed to the terminal. There was very little hassle otherwise and I was soon landside. Onboard G-EUPH during the descent into Heathrow Parked at our stand at London Heathrow A very enjoyable flight. Manchester Airport was as always, very good to do some planespotting. The service on the flight was very good. I would certainly consider flying British Airways again. Although a criticism I find is the poor availability of internet at Manchester Airport and onboard British Airlines to short haul destinations. Manchester only provides 1 hour of free wifi while no major British airline apart from Norwegian provides internet access to customers onboard their aircraft.

The contributors of Flight-Report published 12 reviews of 2 airlines on the route Manchester (MAN) → London (LHR).

The average flight time is 0 hours and 57 minutes.