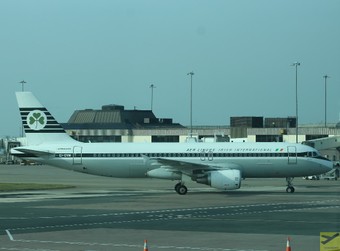 #6 out of 11 Low-cost airlines A minimum of 10 flight-reports within the past two years is required to appear in the rankings. 698 reviews

Arriving at Terminal 1 at Manchester Airport it was a lovely warm Sunday, one of the first this year for myself. I took my luggage and headed for check-in A upstairs. On my arrival at the check-in desks I was guided to an automated bag drop machine (a first for me). The whole process was pretty smooth. I then made my way through to security where I queued for about 10 minutes before going through. I made my way through the departure lounge to the main foyer. The departure lounge is well equipped and features a food court upstairs and another one downstairs. I had 2 hours to spare and so made my way down one of the piers to do some planespotting. An empty concourse on a Sunday afternoon Boarding was delayed by 15 minutes due to the a/c arriving late from Copenhagen. The flight was nearly full (180 pax capacity), but the crew were very good and the aircraft turnaround was soon finished. We pushed back at 16:30 and after the usual checks we began our taxi to runway 05. We were cleared for takeoff and took off into a light headwind from the North East. We continued straight out before turning right heading east. Our journey over the United Kingdom took us over Sheffield, the Pennines and then North Lincolnshire before passing over the North sea. Our cruising altitude was 37,000ft. We reached the Dutch Coast around 17:00 (GMT). Our journey over Europe took us over the Zuider Zee and then just North of Hannover. By this time the last light had disappeared and we began our approach under the night sky. Passing over the Pennines. A British Airways B787 passing alongside Window view from seat 25A of North West Germany.

The interior of aircraft was light and spacious. The seats were pretty comfortable and leg room was not bad - seat pitch on EasyJet A320s is 29 inch. There was a simple drinks and snacks service. I opted for a beer - cost £4 (€5.50). The bistro is not exactly value for money but prices aren't horrendous and there are some offers to be found. Unfortunately there wasn't a duty free service due to the turnaround being quite tight and the crew seemed eager to land and get on with their return journey. View of the cabin We began our approach over Northern Germany. Our approach was straight in. Our route took us over Potsdam and Southern Berlin. We lined up to land on Runway 07. Our approach was pretty smooth and apart from a thud on landing was very enjoyable. Exiting the runway we taxied past several remote stands continuing round to a stand over by the relatively new lost cost pier. Disembarkation was a bit sluggish. Passport control was not great and took about 15 minutes to get through. Baggage reclaim was also not great with it being very congested. I eventually made my way out of the airport and continued on my way to my hotel in Berlin. Arriving on stand at Berlin Schönefeld View of the terminal building landside at night.

Below is the video of the flight

My time at Manchester Airport was not much of a hassle and I enjoyed my time waiting. The flight was good and I was content with the service provided by EasyJet. The cost of things onboard was reasonable for what it is charged onboard airlines. Schönefeld was a bit disappointing and its age and small size showed. This was my first time onboard an Airbus with sharklets fitted which looked good and sleek. The cabin was clean and there was a good amount of space onboard.

If there is anything I could improve on then your comments would be appreciated.