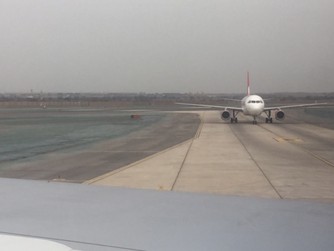 #26 out of 71 Airlines A minimum of 10 flight-reports within the past two years is required to appear in the rankings. 526 reviews

By 767 traveller 2384
Published on 8th March 2016
Hello and welcome to my latest flight report! About a week ago, I flew from Lima to London in American Airlines with a stop in Miami. This was my first time flying from South America to Europe through the USA. Although it is far from the fastest way to get there I was eager to try it out.

My flight would leave Lima at 9 in the morning. We arrived at about 7. The line at the AA check in was quite long but it did move quickly.

I was checked in by a friendly agent. She said the flight was completely full in all classes and that was true!

I then met my father who was flying the first segment in LA. We went through security which was slow, however there were not many people in immigration.

By the time we were airside, it was already close to boarding time. I bid goodbye to my father and went to my gate. I was seated in row 26, a standard main cabin seat. Legroom was a bit tight but bearable for a 5 hour flight.

We took some time to take off due to the usual traffic in LIM. About half an hour after takeoff the flight attendants rolled the carts and started giving breakfast. I did not like their system. Rather than just delivering food and drinks from the same trolley and at the same time, there was one flight attendant giving the food and then another one with another cart giving the drinks. The thing is that drinks took ages to arrive. Choices were Omelette or sanwich. I chose the Omelette which was fine and washed it down with a cup of tea. The flight attendants in flights from LIM to MIA are Peruvian, while the Pilots are from the USA. The crew members serving me were quite friendly. Perhaps I just had low expectations from AA.

I then had some failed attempts to sleep, but eventually gave up and started watching a few shows I had loaded in my Ipad. The sky was clear, allowing some nice views of the Carabeean. An hour before landing the crew started to deliver a pre arrival snack. This time it was a tasteless sandwich and some sort of brownie. Again my coke took ages to arrive. We landed on schedule without any hassle.

I bid goodbye with my seatmate whom I had a long chat before takeoff and made my way to immigration. My plane in MIA.


There was quite a queue and it took me about 20 minutes to be seem by an official. There was another Peruvian guy who was also transiting through the USA. Apparently he didn't know where to go. I saw immigration staff yelling at him telling him that he should know where line he should go. Then they sent him the wrong way. My official was not rude but not soft either. He asked
me a few questions before stamping my passport. I had to pass through baggage towards the main hall and then re clear security. All of that took more than an hour.

I will then include a report of my flight from MIA to LHR on an AA 77W.

It had been a long time since the last time I flew AA. Quite frankly I tried to avoid them if possible. However, having low expectations of their economy product, I have been pleasely surprised. Although the cabin in their 757 is very dated and there is no IFE in Y, the crew provided positive and consistent service throughout the flight making it enjoyable.

The contributors of Flight-Report published 4 reviews of 2 airlines on the route Lima (LIM) → Miami (MIA).

The average flight time is 5 hours and 50 minutes.

767 traveller is member of Flight-Report since March 2014.

He wrote 19 reviews about 9 airlines and 11 airports.