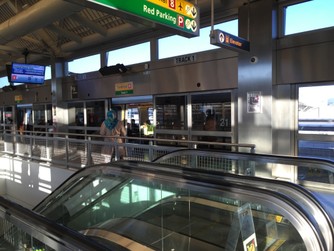 By viajero90 2375
Published on 15th March 2016
Hello! So this is the second part of my series of report from my trip to New York on the past weeks.

I had arrived on flight LA4546 of LAN Argentina from EZE at 18.30, and we disembarked on Terminal 2 (part of the old GRU). I still had a couple of hours until the flight to JFK.

The area I was in Terminal 2 doesn’t offer much. There was another part which was closed because they use it during the day for domestic flights (the part where the gate for my flight was). There was a Starbucks, another café, a Duty Free Shop, and that was all. 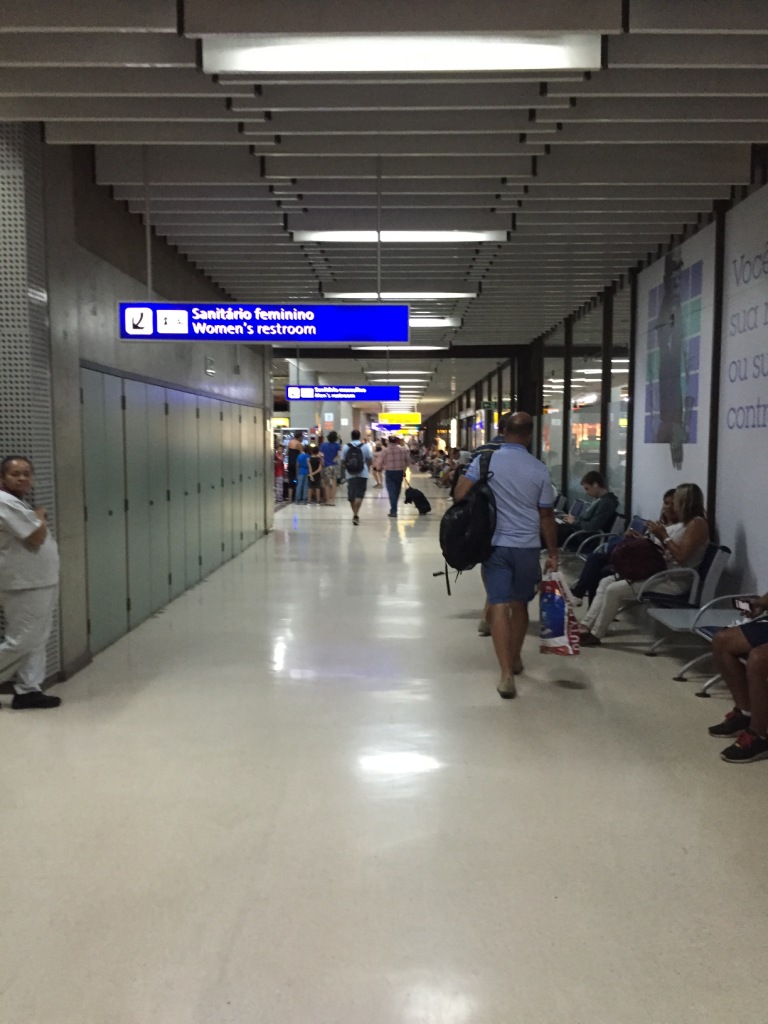 Later, I discovered GRU airport offers one hour of free wifi, so I got online, and entertained myself for a while. Then I saw the other area was opened. This part has better places to buy a drink or something to eat. There is Café Havana (an Argentinean chain of cafés that has branches in other south American countries) and La Casa do Pao de Queijo (in English “The House of Cheese Bread”), a Brazilian place which I love. 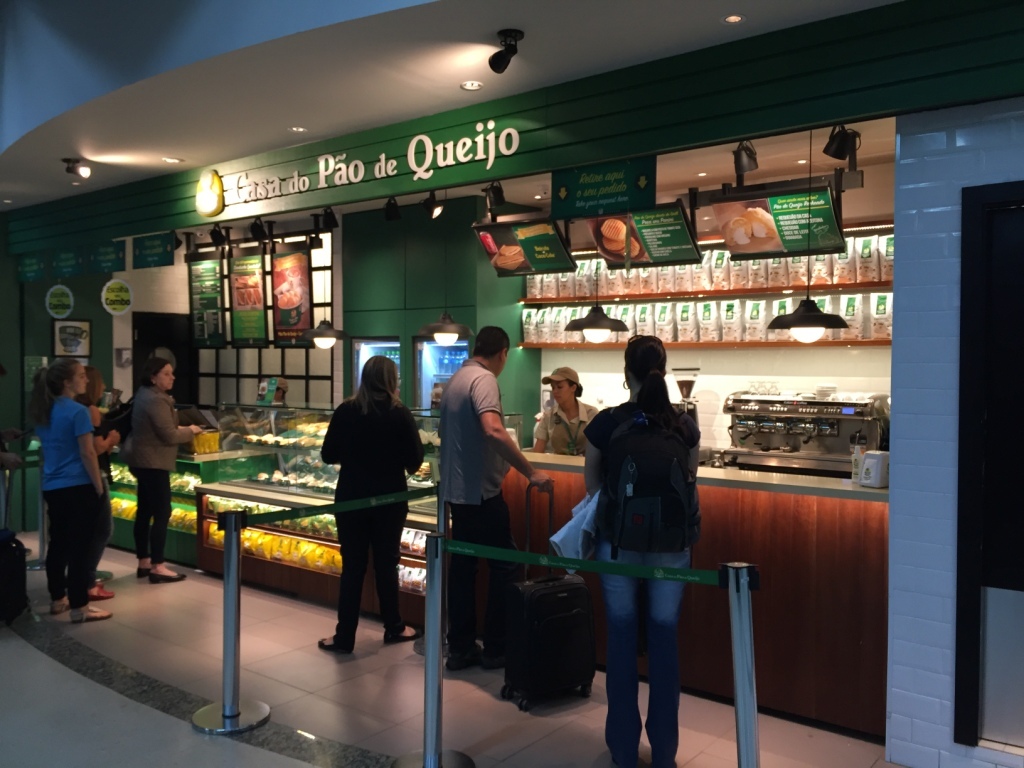 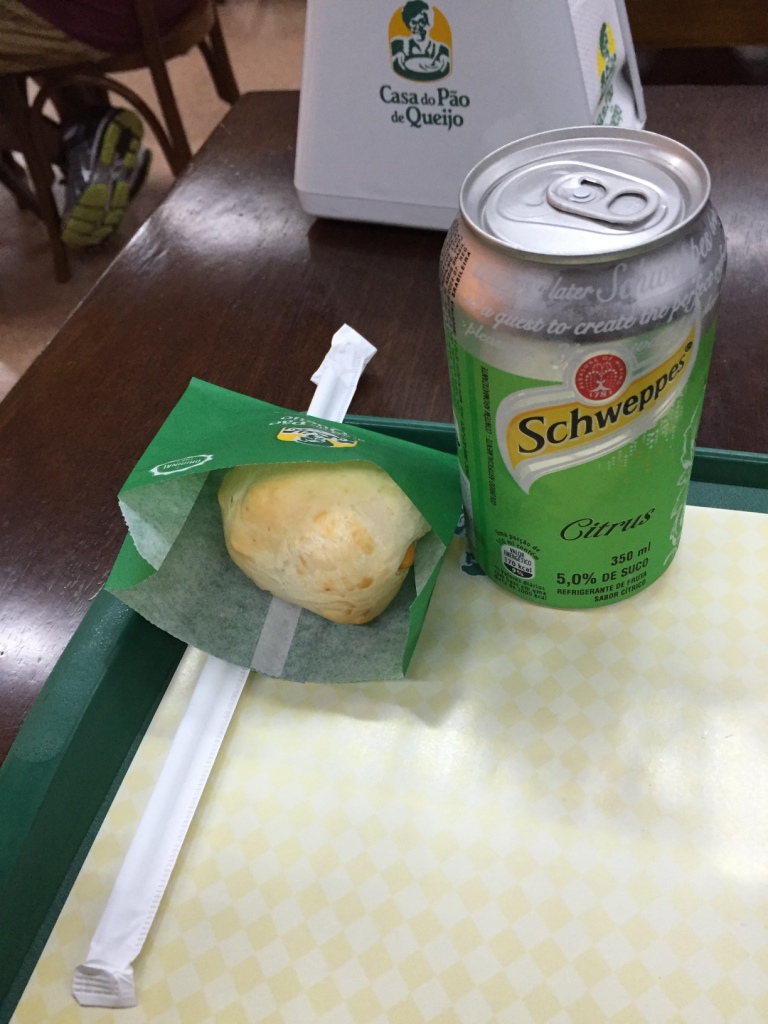 At 21.30 they announce that the boarding for my flight to New York was going to start. Most passengers were Brazilian and Argentinean and I saw some Americans too. There were many people I saw on my flight from EZE. The boarding process was in the same order has in my LAN Argentina flight, and it also was the same kind of aircraft. This was Boeing 767-300ER, register PT-MOA that TAM received from LAN. 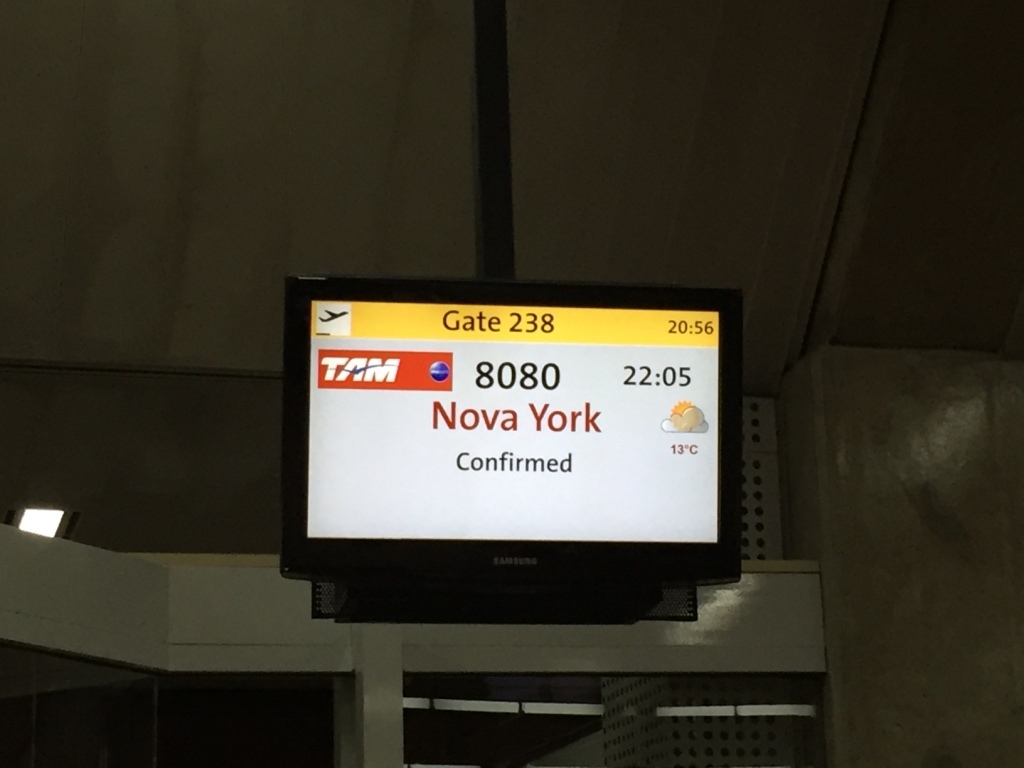 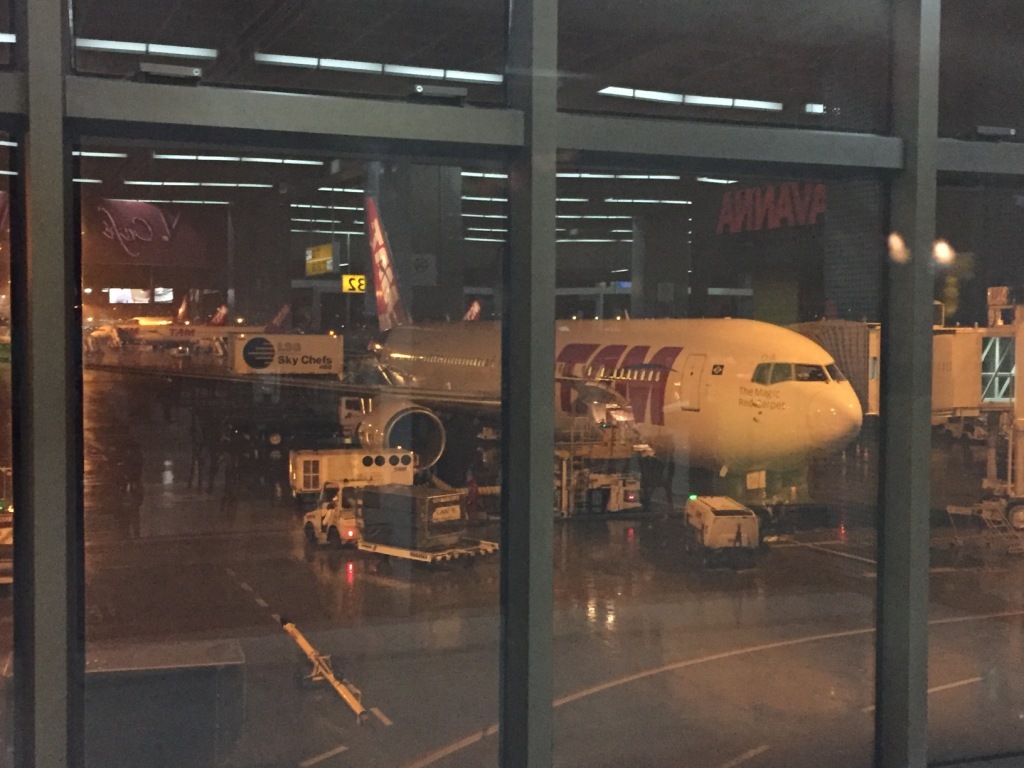 At 21.50 I boarded, the plane looked very clean and new. The FAs greeted me with a big smile. This 767 has new interiors and entertainment system with touch screen. It’s the same system offered in LAN’s 787 that I saw last year on my SCL-EZE flight. 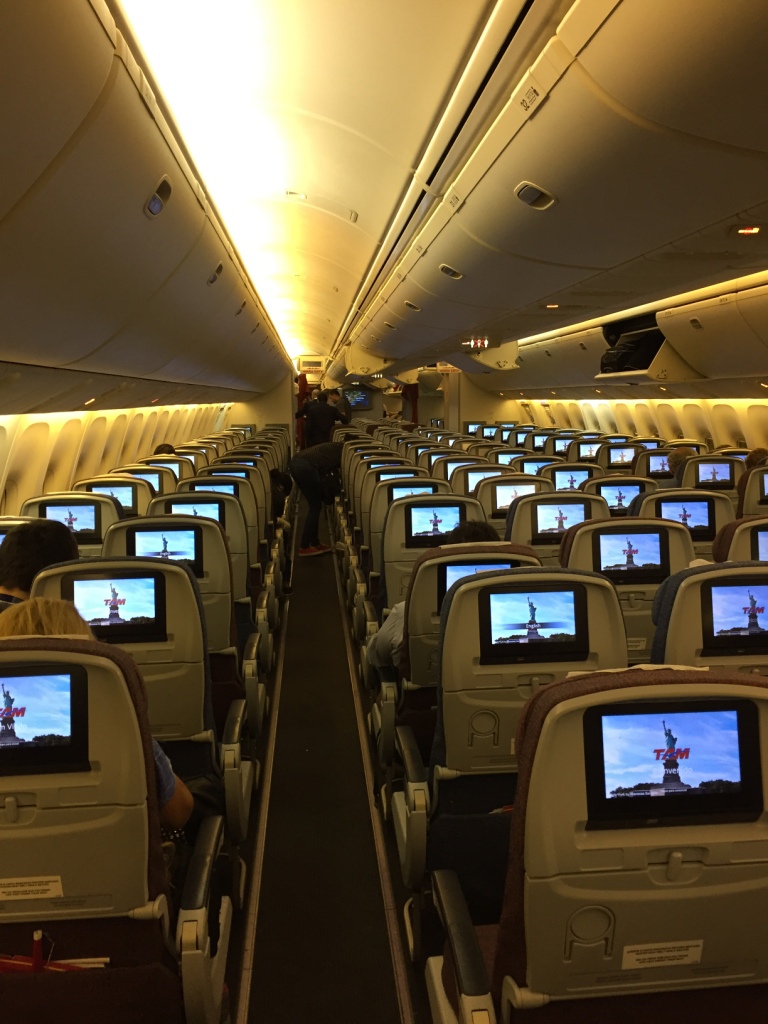 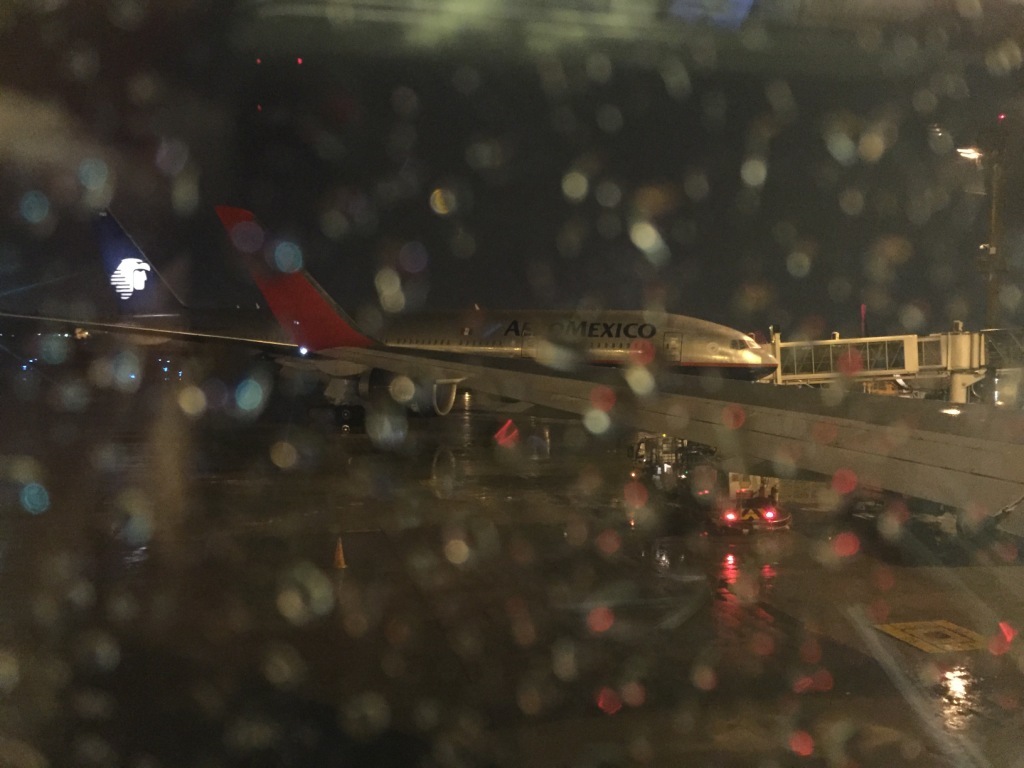 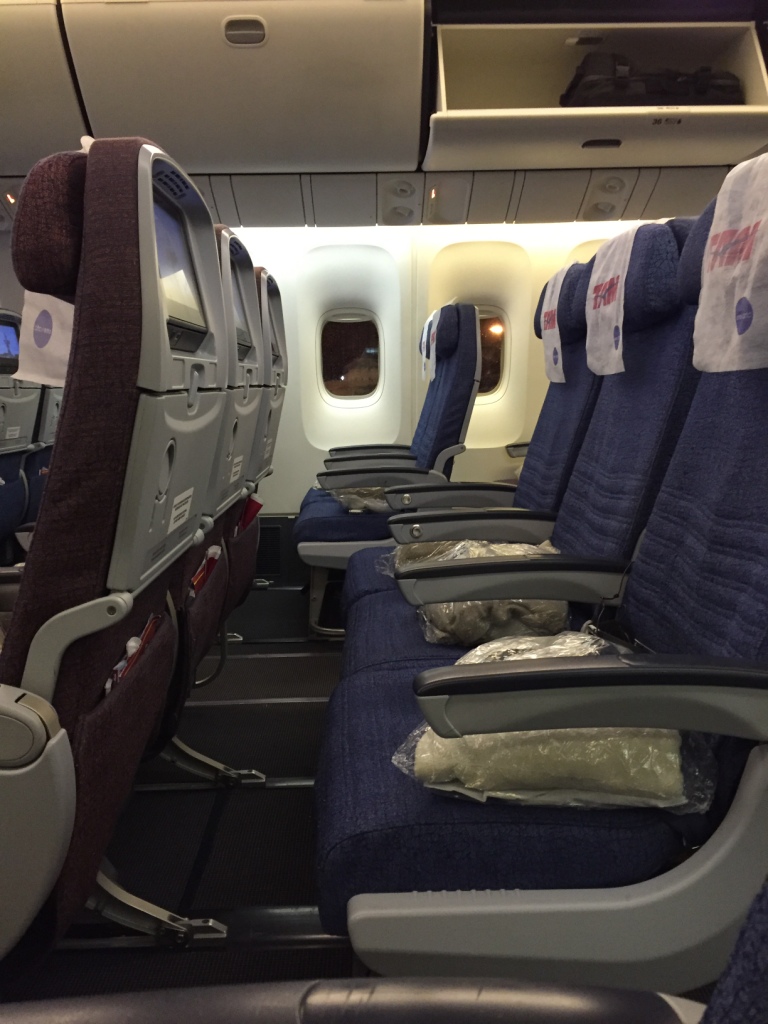 Some in flight magazines 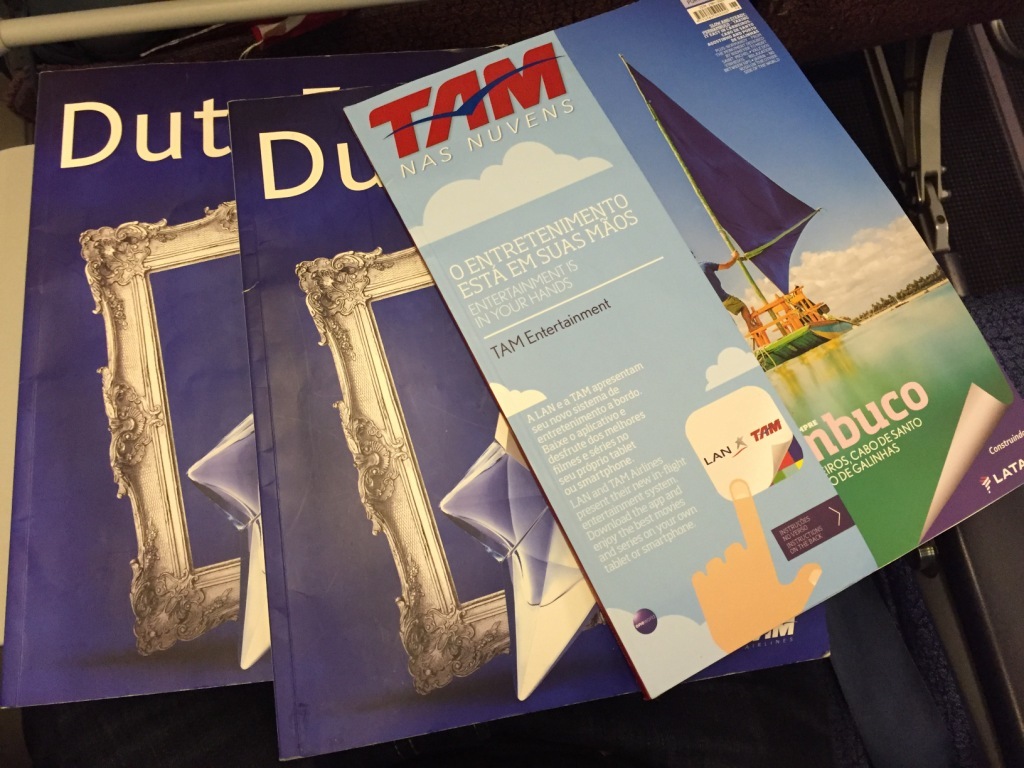 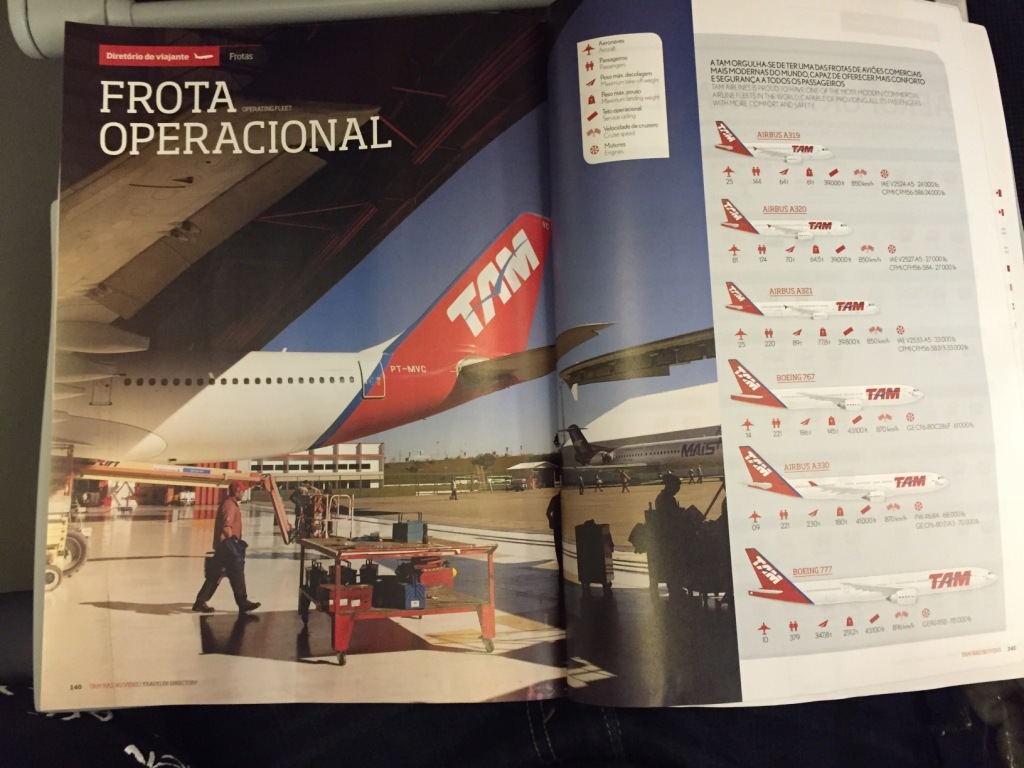 The FAs handed me a welcome banana flavored candy 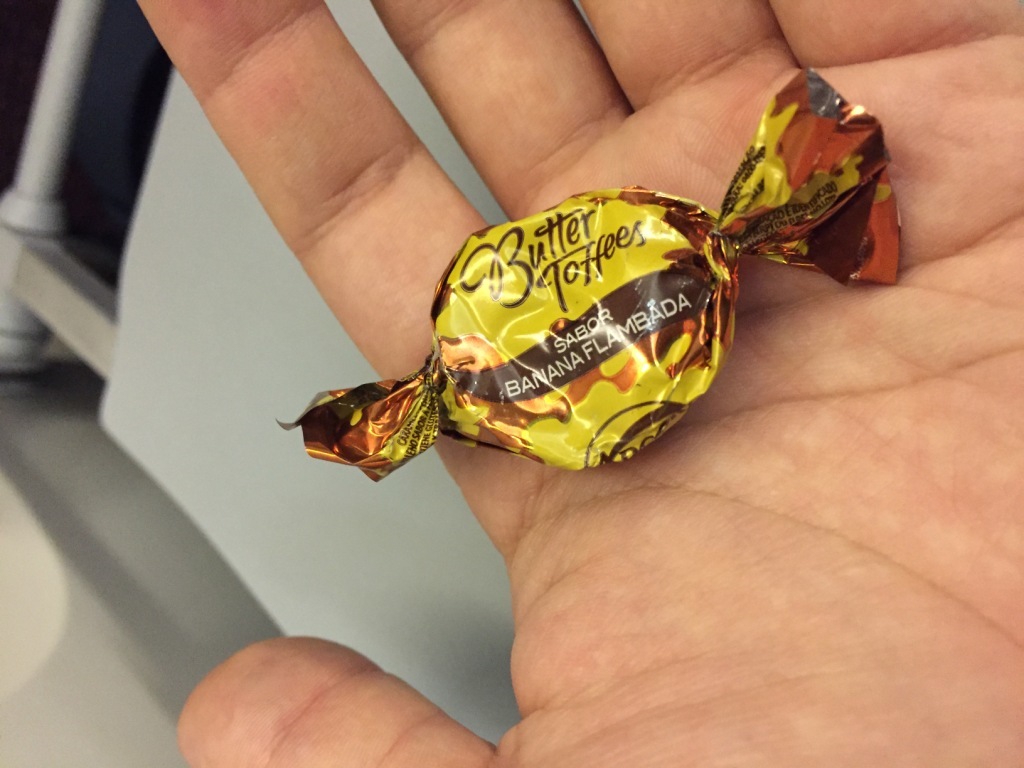 At 22.30 the captain introduced himself and welcomed us. He said the flight will take 9 hours approximately. Then the chief FA greeted us and they put the security demonstration video while the plane was pushed back. All the announcements were made in Portuguese and English 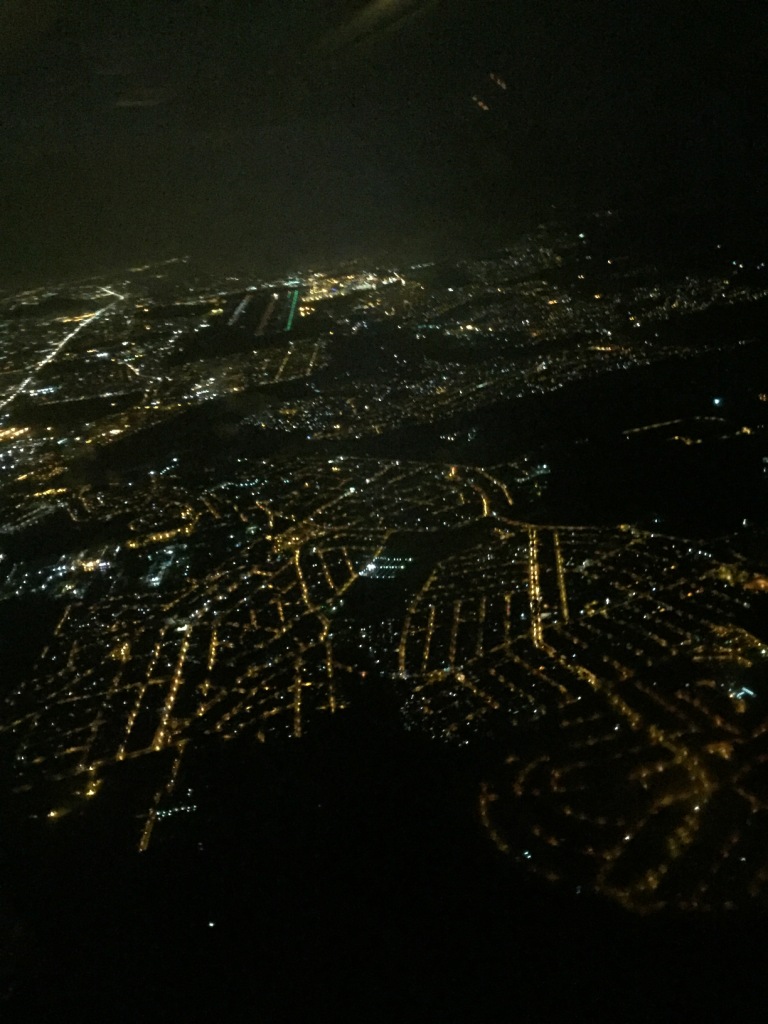 An hour later they served dinner. Choices were chicken or pasta. I took the pasta. There were cheese ravioli with cream, very tasty. There was also a salad; some crackers, cheese, and a small portion of chocolate cake vary very tasteful. 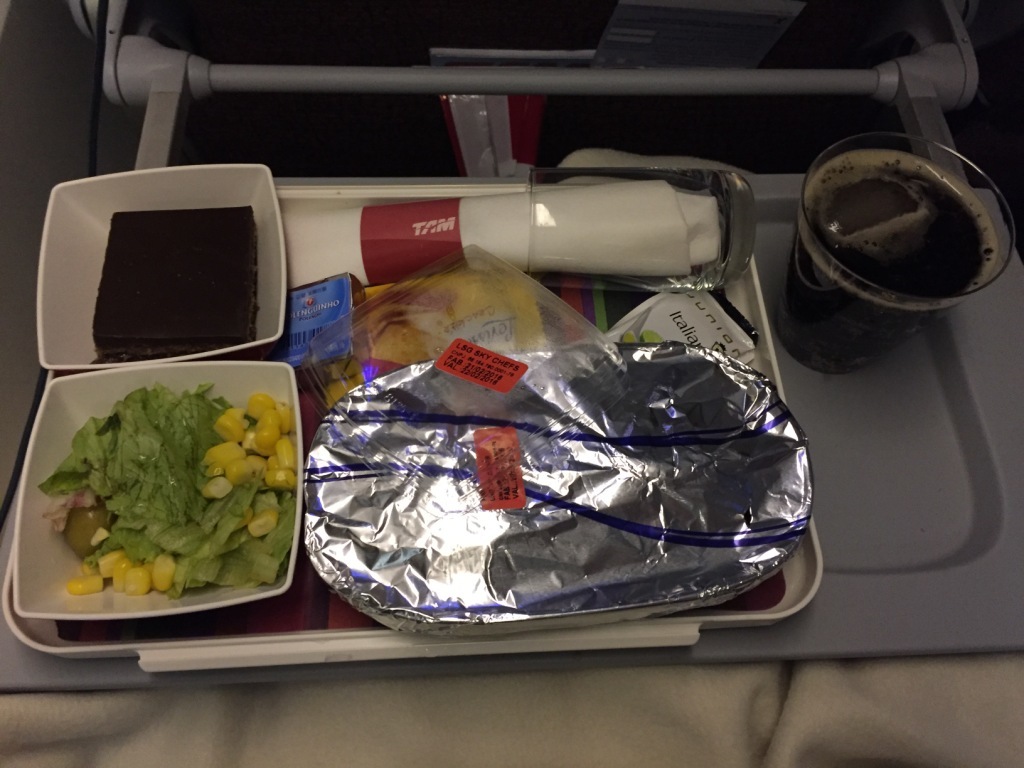 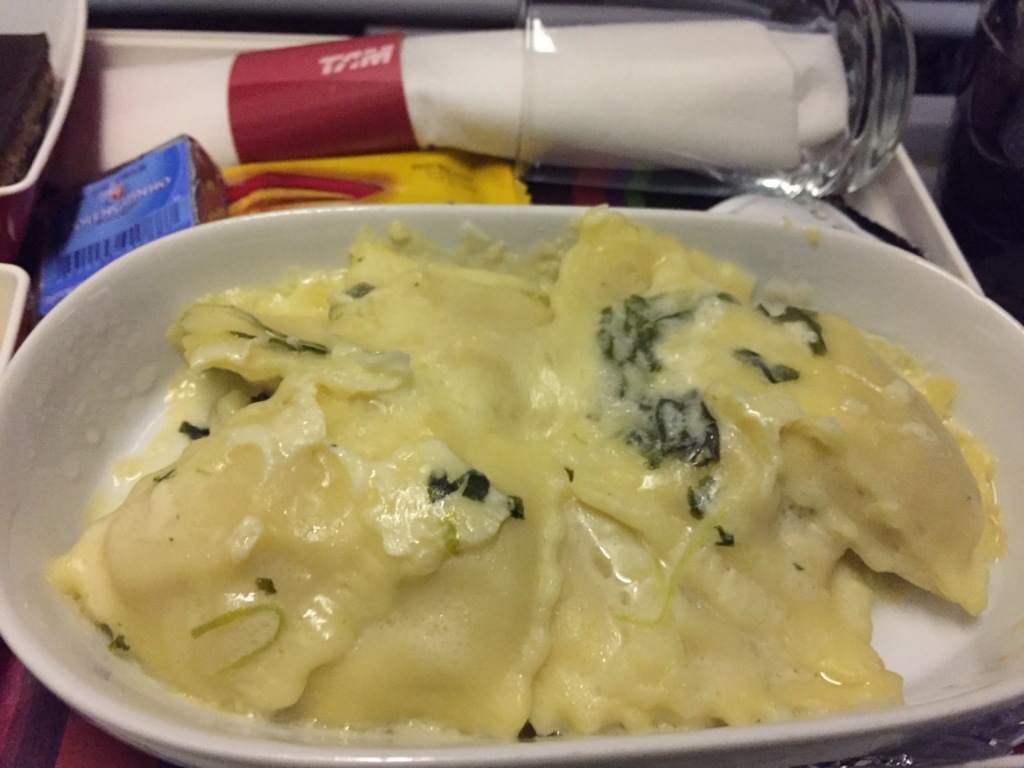 After dinner the FAs passed by, offering wine. As I wanted to have a peaceful flight and sleep well I said yes! Haha 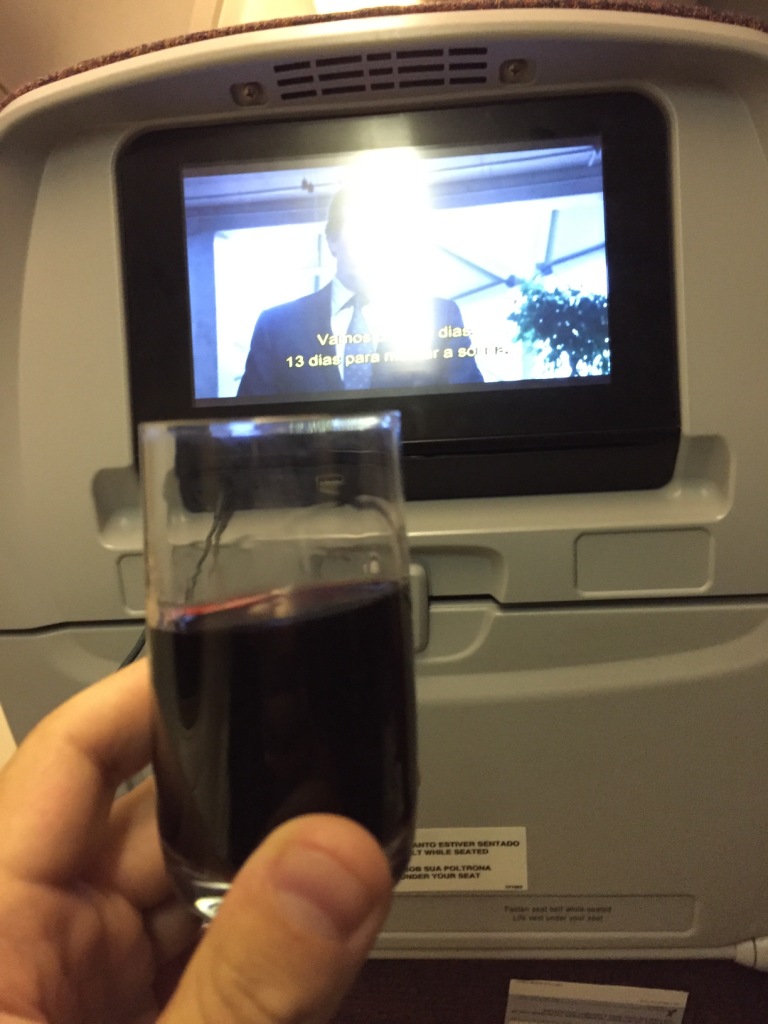 Finally they took away the trays and offered coffee, tea, water and chocolates too. 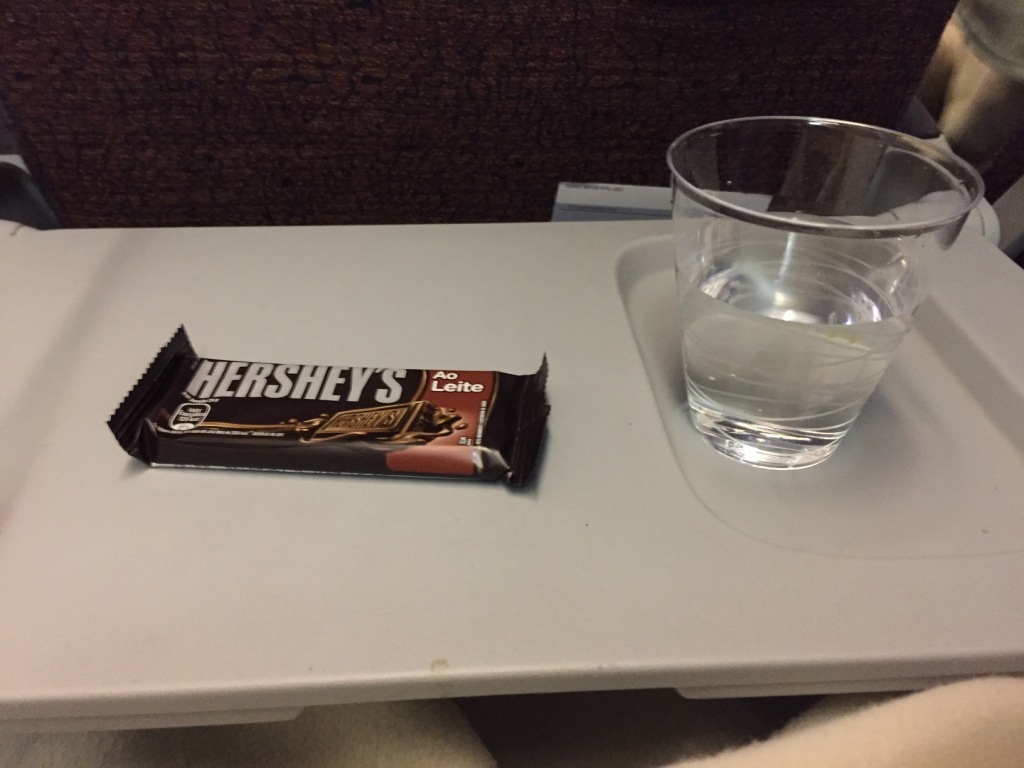 When I first got on the plane I asked one of the FAs if she could bring me an eye mask. She told me that she will bring me one later. I thought she had forgotten. But after the last service she came and handed me and eye mask! What a nice gesture!

When I went to the restroom I could see in the back galley there was a tray full of these eye masks, socks, toothbrushes and toothpaste and earplugs available for anyone who wants to take them. I think this is remarkable. The other airlines which fly these routes (I mean American carriers), offer a very lower quality service: uncomfortable planes, bad food, and rude FAs (I wrote this thinking of my American airlines flights between the US and EZE)..

Flight map before I fell asleep 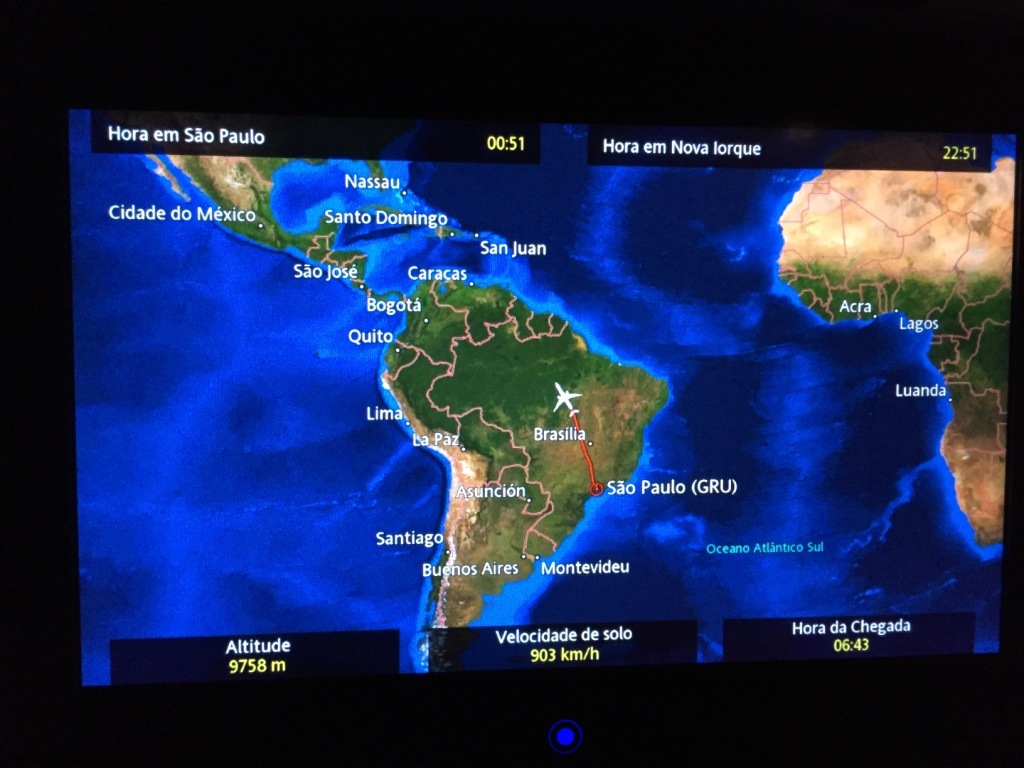 About the entertainment system, it is very complete too. They have almost the same contents as I saw in LAN. On this flight I watched the movie “The Martian” with Matt Damon. When it finished I tried to sleep. Thankfully for me this flight wasn’t full at all. The occupation level was about 60%. In the middle rows there were people lying on the 3 seats. There wasn’t anybody on the seat next to me, and I had 2 pillows and 2 blankets. The air con was very chilly, thanks God I has an extra blanket.

At 5 am, New York time, I woke up and saw the FAs were serving breakfast. There was still an hour for landing..
The breakfast included a ham and cheese hot sandwich, crackers, butter and jam, coffee or tea. 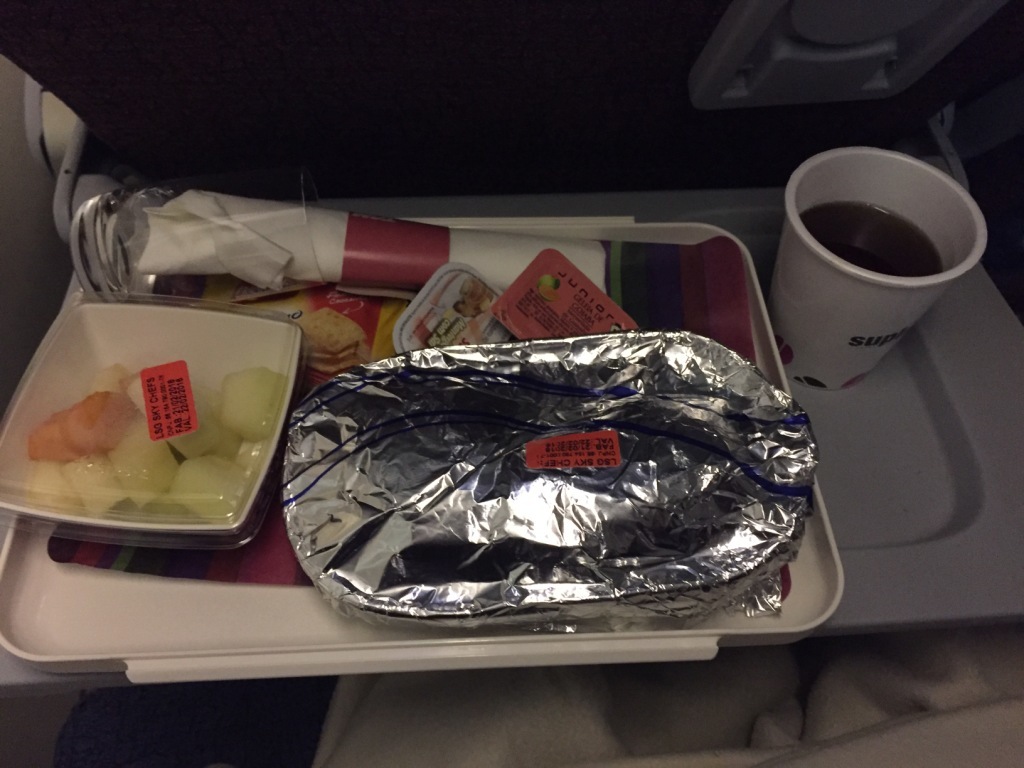 At 5.45 we started our descent 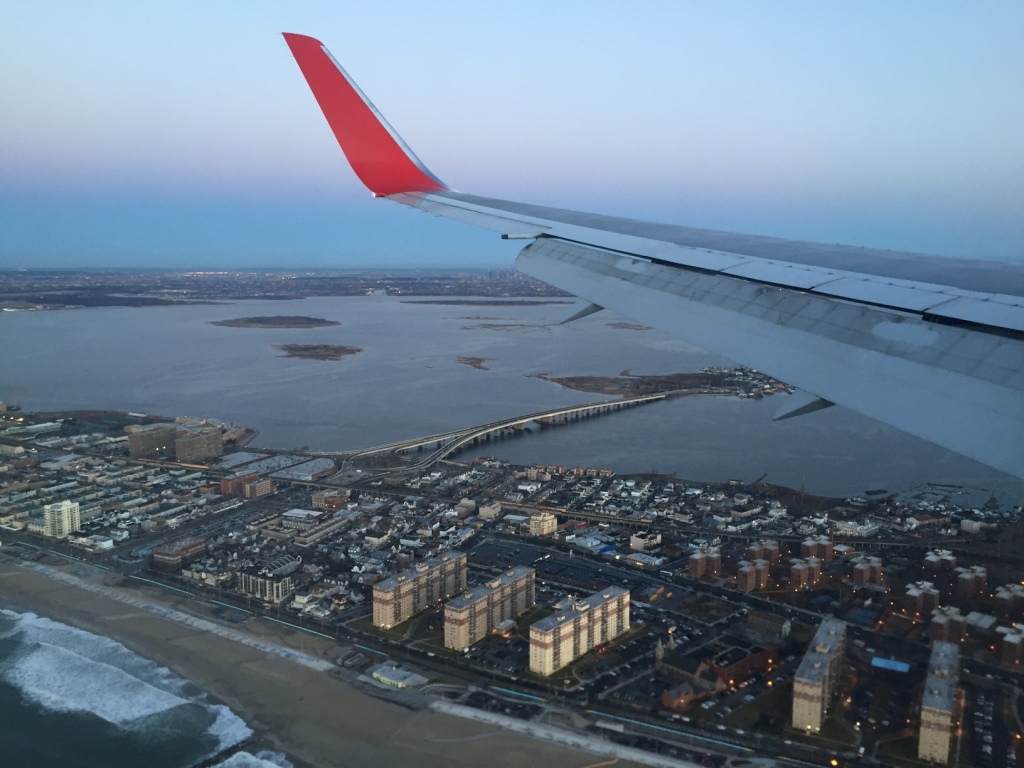 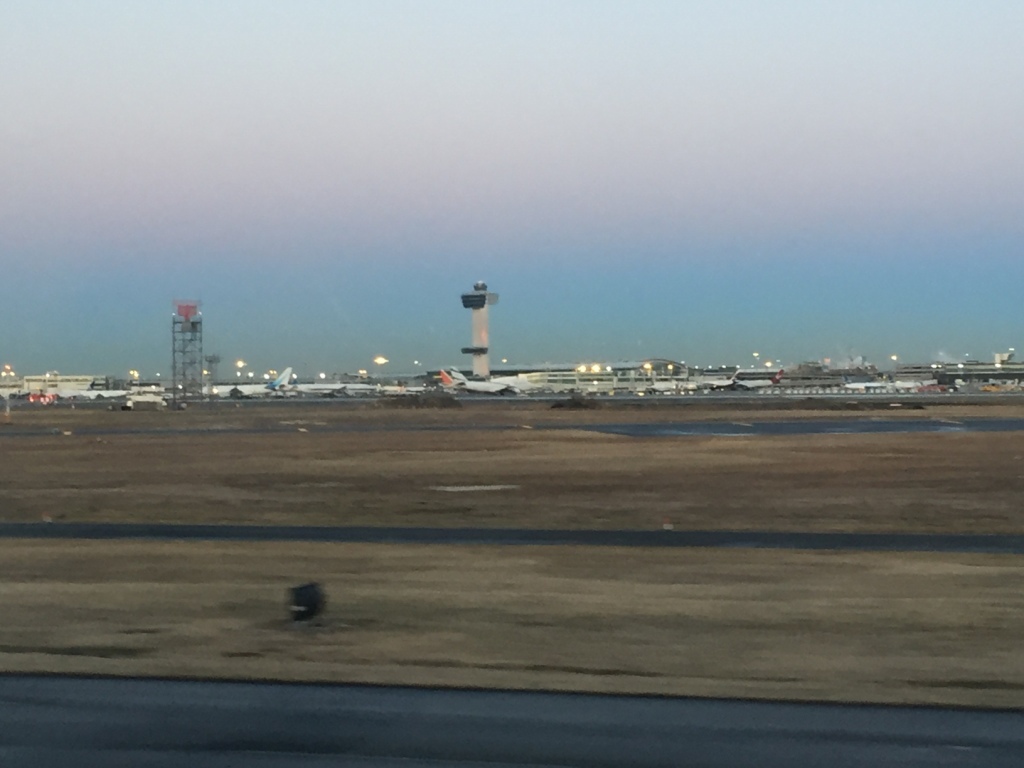 Once on the ground I could see many planes from different airlines, some I recall: El Al, Air India, JetBlue, Virgin, British Airways, Air Canada, etc. It was on the way to Terminal 8, the one TAM operates in. 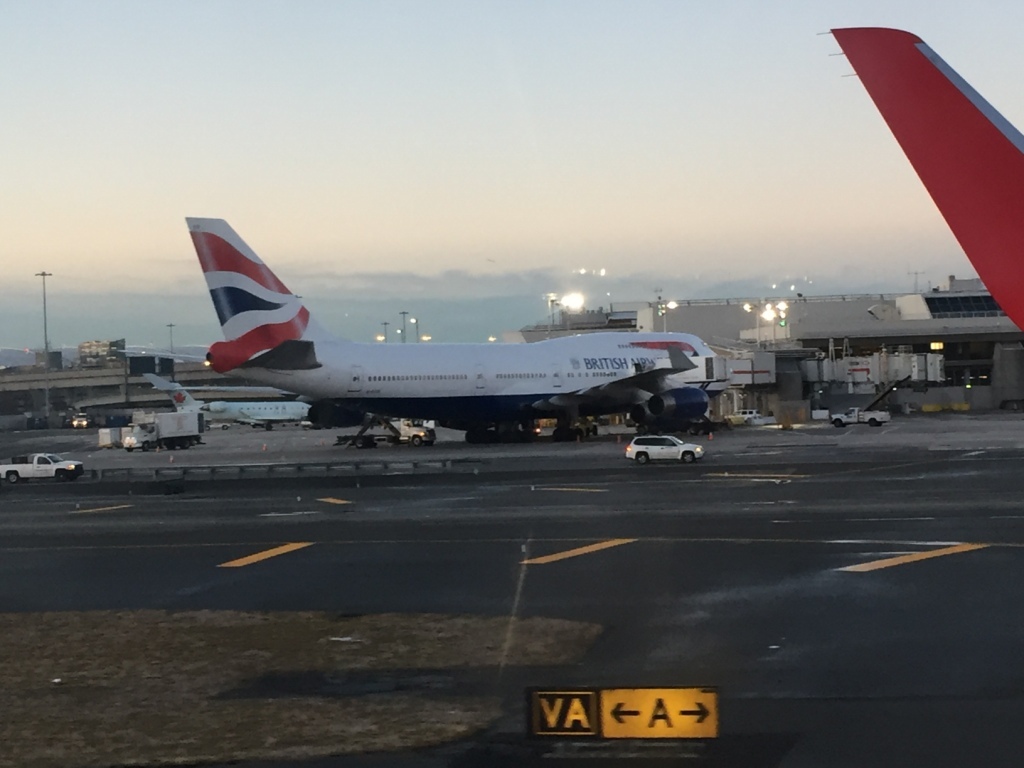 When I got off the plane there was a long walk to migrations. There I was greeted by very cheerfully in Spanish by agents who accommodated people in different lines. There I saw some unfortunate people been taken to the mysterious interrogation rooms.

When my turn came, the agent was a very gentle lady and she only asked me how long was I planning to stay and if I was travelling alone. That was all and she welcomed me to the United States of America!
After that I went to look for my luggage, which took an eternity to come in! At the same time they were delivering luggage from the direct flight from Buenos Aires.

Finally my suitcase came and I passed through customs where the agent asked me the same questions as in migrations, and that was all. 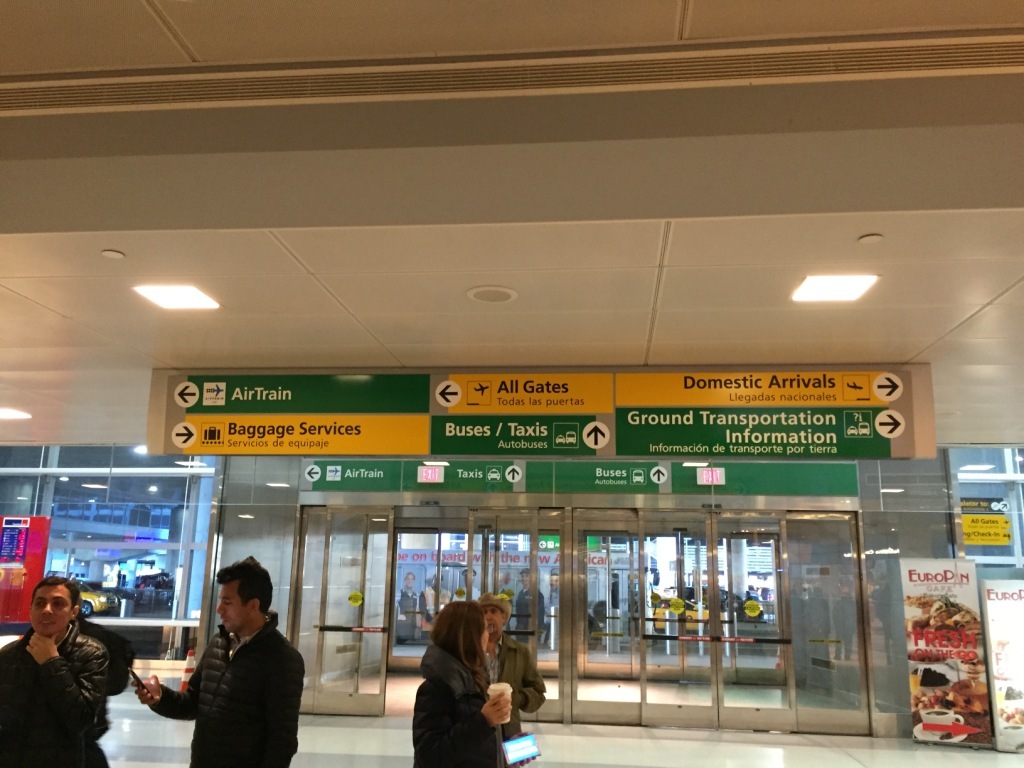 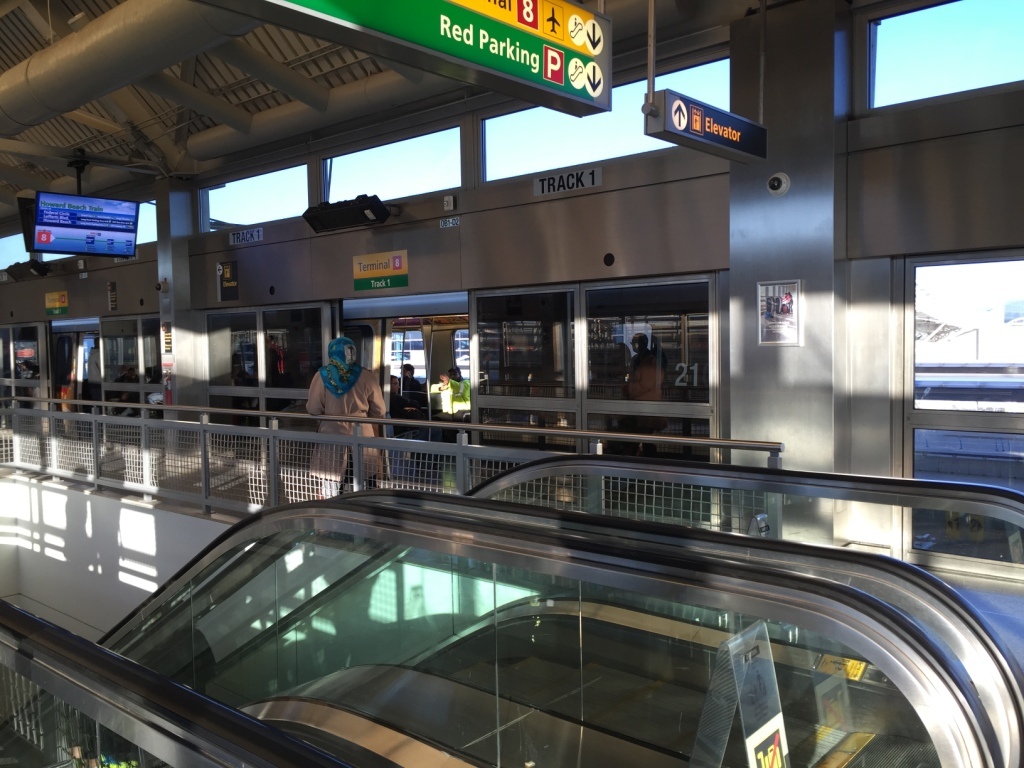 From there, downstairs to the metro, and one hour and a half later I got to my hotel in Manhattan. 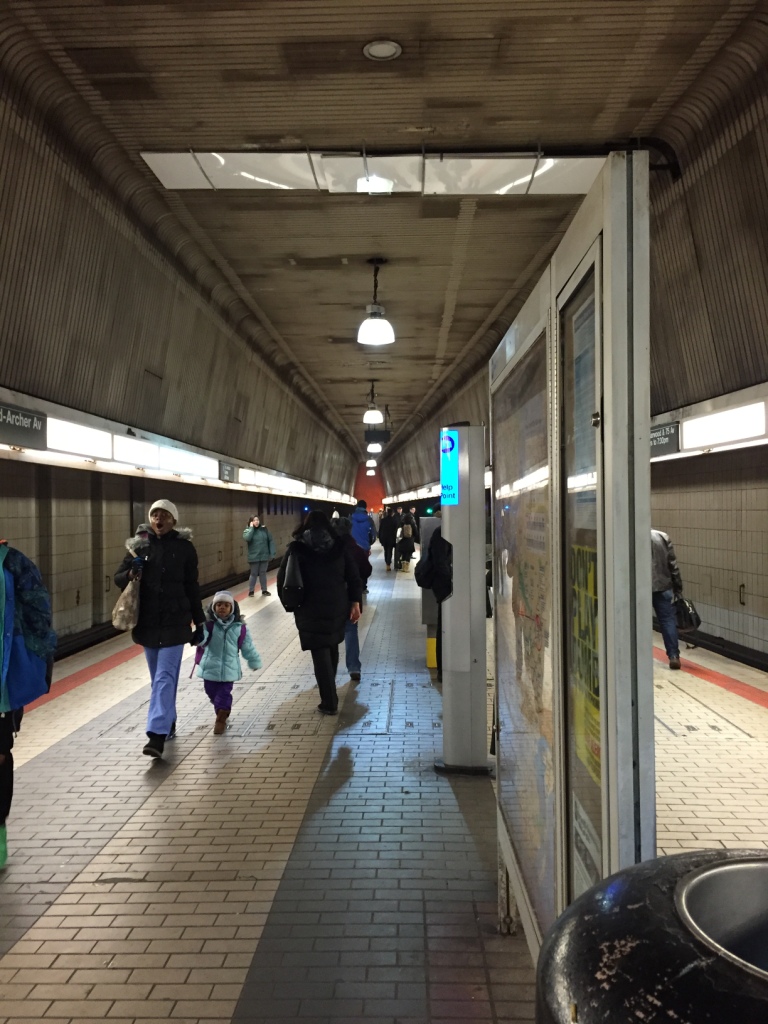 It was a very pleasant flight. The crew was amazing. TAM improved a lot the service since its merger with LAN..

viajero90 is member of Flight-Report since October 2013.

He wrote 32 reviews about 17 airlines and 26 airports.