#7 out of 115 Airlines A minimum of 10 flight-reports within the past two years is required to appear in the rankings. 42 reviews

By Jetset 2490
Published on 9th February 2016
Background:
This was my first time in Chicago during winter and it was like I expected it to be: cold and windy. The air seemed to be pretty fresh compared to New York where a lot of pollution is.

As the ride with the CTA "Blue line" to the city worked so well, I used it for the return trip to the airport too. The price for a single ride ticket, like I had, is $3. Except when departing from O'Hare where it is $5.

The subway ride takes about 40 minutes and terminates in the clean and modern station of O'Hare Airport.

For my JetBlue (B6) flight I had to find my way to Terminal 3.

The Christmas baubles prove that this flight took place back in December.

The check-in area is shared between many airlines which do not need much space.

The JetBlue area with its creative decorated check-in kiosks.

I already checked-in online, but did not have a printer available, so I printed my boarding pass at one of the machines.

The next step was the security check with almost no queue, so again no need to purchase "Even More Speed".

The first glimpse of the apron on that very foggy day.

As always ORD has some kind of nice decoration to offer. This time it was a sentimental Christmas theme.

One of the most important things for travellers: Connectivity. At Chicago O'Hare Airport you are offered 30 minutes of complimentary Wi-Fi.

After some time discovering the terminal I realized it already was boarding time. I rushed to my gate "L5".

The aircraft was an Airbus A320-232 with the registration N643JB. In 2006 it entered service and since then it is part of the JetBlue Airways fleet. It is configured with 150 Y-seats. 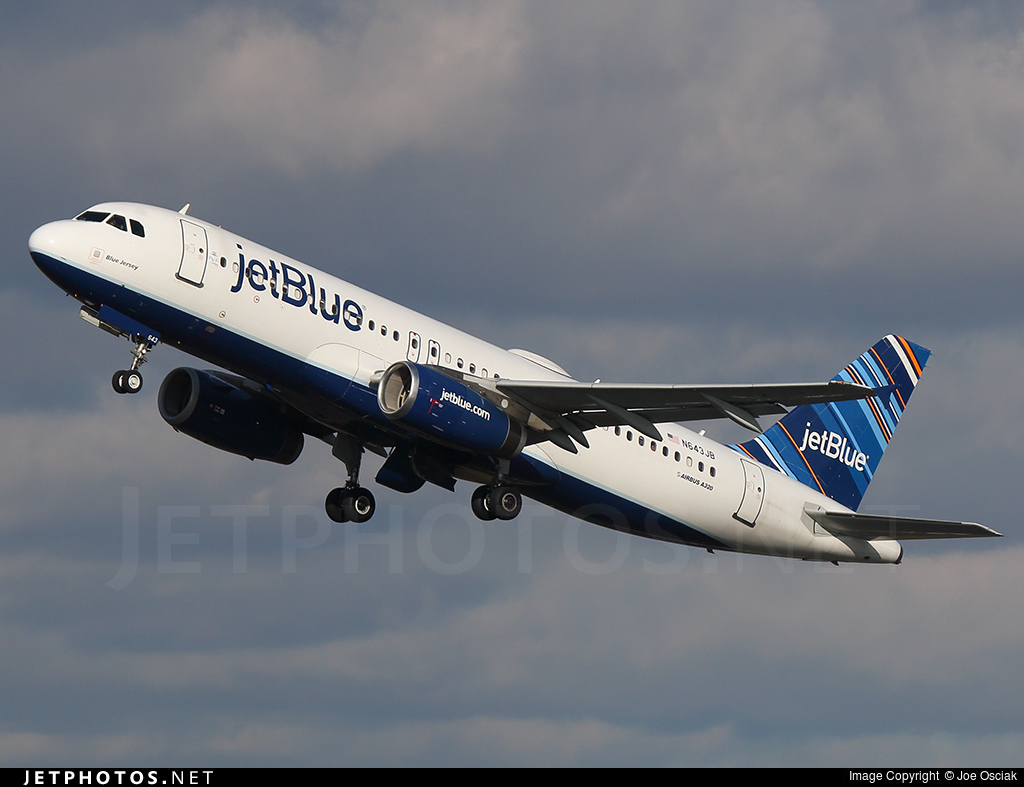 Upon entering the Airbus this sticker attracted my full attention. The Embraer on my flight to Chicago has not been equipped with it.

Being excited if Fly-Fi would work on that flight, I tried to connect my phone as soon as I got in my seat.

By the way: The seats in JetBlue's A320s have an outstanding 34" pitch, but are a bit narrower than in the Embraers. Again I stored my luggage and coat under the front seat. The flight was fully booked.

Being number 8 in line for runway 32L.

Diving through the thick clouds…

…to meet the sun!

Soon Fly-Fi came online. I was amazed! The first time texting and sending snaps via Whatsapp inflight. On the other hand, people enjoying the seclusion above the clouds won't like this new trend.
But first you need to register, JetBlue promises that your data will be handled confidential.

With this innovational technology available, I did not even use the inflight-screen a single time.

After the seatbelt-signs turned off the cabin service began. I ordered the same than on my flight to ORD. Two cans of apple juice…

…and a pack of Skeeters. This time I also tried JetBlue's famous blue "Terra Chips"

I was a bit disappointed that there were no wet wipes handed out. Somewhere in my bag I found some from an earlier flight I took.

Fly-Fi offered me some enhanced flight information, what I found just awesome.

Flying over Queens during approach. JFK can be seen in the background.

Terminal 5 is a very modern, bright building with not too long ways to walk.

Even though the airport is very busy, I could grab my suitcase just after a few minutes.

A final overview of the departures level before heading to the AirTrain.

The old TWA Flight Center in front of the later built B6 terminal.

For me this screen is totally confusing. Which sense does it make to display exactly the same information in two different ways at the same time?

Riding the AirTrain inside the airports area is free, but if you want to exit (for example at Jamaica station) $5 have to be paid.

At Jamaica station I got on a Manhattan-bound Long Island Railroad (LIRR) train.

I think this was the very first flight on which I've been online. So far for me a unique experience!

#Cabin comfort
It was an awesome experience enjoying a legroom this large in Economy Class.

#Crew
I don't remember anything negative with the crew. It must have been average.

#Catering
Free drinks and snacks on shorthaul-flights in Economy Class are always to point out.

#Entertainment
There were no newspapers or magazines offered. Also the onboard screens were not that good. But they offered free WiFi on cruising altitude what I really enjoyed.

Jetset is member of Flight-Report since June 2015.

He wrote 6 reviews about 2 airlines and 5 airports.