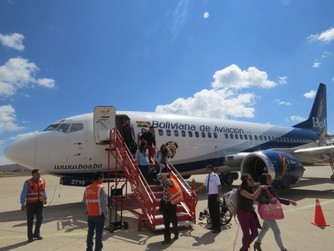 This was the the continuation of my fast trip by Bolivia. Indeed i stayed one day at Cochabamba, but enough to see the highlights of the City and even visit a historic village, Tarata, home town of many important figures in the history of Bolivia. The day started earlier having a hearty breakfast, but also drinking a Coca tea, because now i was going to higher grounds (Sucre is at 2.800 meters above sea level as average), so i had to prepare for that. Going to airport by taxi costed me about 5 dollars, and was a quick ride (not more than 10 minutes from the city center). As Santa Cruz Check In was faster, i was advised to have patience in Cochabamba because in the sierra the people is different and has another rhythm. And the guy from the hostel in Santa Cruz, was right, because here there was not a big line, but it took about 30 minutes to drop my baggage because people didnt respect the lines, and also some problematics situation by some passengers that carried more baggage than the allowed and other that lost a flight to Santa Cruz and were asked to buy a new ticket in the counter.


After such slow Check in, i went to walk thru the departure hall. We were not allowed to go to airside until 50 minutes before flight, and we pass the security check quite faster.

then in the boarding room i made some pics of some historical planes that were in the airport, some 727 from Lloyd Aereo Boliviano and a DC 3 The tower of the Jorge Wilsterman Airport A Boliviana 737 arriving from La Paz This time the seat was more incomfortable, and the legroom was really tight. But for this 30 minutes hop from Cochabamba to Sucre, i made the sacrifice. (made this leg by bus meant to travel in a overnight in dangerous and curvy roads) View from the window of another Boliviana 737 parked View of the cabin

The takeoff was in the opposite direction than the last day arrival. There was offered just a snack box service like last day from Santa Cruz, but without drinks.

One interesting thing of this flight, is that the flight doesnt end to get cruise level when start to descend. The descend is quite scenic because the plane practically glides thru mountains. The Landing was normal, but took the whole runway in sucre. Also is very scenic the little terminal of Juana Azarduy Airport (it's supposed that soon will be put out of service) and everything looked so close to heaven, really we were almost at heaven gates. This second leg with Boliviana continued in the line as the flight Santa Cruz-Cochabamba, but this time the seat was more uncomfortable for a taller person like me. In the other hand, this is a short hop so it's possible to survive it.

He wrote 8 reviews about 7 airlines and 12 airports.