By aussenrist 966
Published on 28th June 2016
Hi and welcome to my third installment of flight reports!

This series will cover my quick business trip to San Francisco. In order to make the reports more interesting, I will reveal the routing as we go on.

This is a boring US domestic flight report, so in the second part of this report I will show you my life in HKG during the Chinese New Year.

Precedently on last report, I was here once I rechecked my baggage. My flight was already listed on the bottom of the middle FIDS and shown it would be departed at Gate 83, Terminal 8.

I exited from the Terminal 6.

The first thing to do after a 9-hour flight was to have a break. I got relaxed near the famous Theme Building.

Having about a 2-hour layover, I decided to explore the LAX.

The first checkpoint is the TBIT. I backed to Terminal 6, took upstairs to the departure level and walked along the World Way, the airside connector between TBIT and Terminal 4 was still in construction at that moment.

Inside the TBIT. Not many passengers in the meantime.

Then I headed back to the southern terminals.

Still having time therefore I wandered around outside Terminal 5, 6, 7 and had some breaks…

It was a bit cloudy at LAX today

And it was very hot! (compared with HK and Tokyo @@)

In order to prevent my ex-ORD incident happened again, I went to airside from Terminal 7 about 1.5 hours before took off.

The check-in counters at United Terminal 7. Very long queue! I should be happy that I did not need to rechecked my bag there. I even could not figure out where the end of the queue was.

The FIDS. My flight was shown departing at 1:39pm on time.

I took the escalator upwards to the security checkpoint.

Luckily only 5 people were waiting for TSA. I cleared the security in 5 minutes.

I was here once passing the TSA. The directory of Terminal 7 & 8.

The United Terminal is undergoing renovation.

Will the Polaris Lounge be here?

Walking to the Terminal 8

I refilled my bottle and walked around in the Terminal 8. I like those tarmac facing desks so that passengers can have a nice view.

Far view of my previous B789

I arrived at my gate which was not ready for my flight and even my plane had not arrived yet. It was just closed for the flight to HDN (Hayden, CO)

Passengers sat aside and waited

And my Gate's FIDS changed to my flight information.

Today the plane was fully loaded.

Boarding started 20 minutes prior to departure. I was in group 5 so I queued last minute.

My boarding pass (this picture was taken in HK)

I witnessed my baggage was loaded! ;)

Once I entered the cabin, I spotted 2 pilots were preparing for the flight.

One of the pilots noticed that I was looking them. He got up and warmly greeted me. We shook hands and he even invited me to visit the cockpit. But coincidently there was a FA intended to call the pilots, I politely declined and returned back to the cabin.

The cabin, it equips with leather seats which are the same as my previous B789.

I found my window seat 12D. But there was a businessman who already sat on my seat and sleeping! I tried waking him up but he remained unconscious! OK it was just a short flight, I tolerated and “exchanged” the seat with him lol

My “new” aisle seat 12C. Good seat pitch for an US domestic flight.

The seat back materials.

There were 2 FA on this flight. The FA marked down the drinks preference of those 1K members before push back.

We pushed back on time and the FA made the flight announcement.

The pilot announced that because of the busy traffic in LAX, we would have a 15 minutes wait on the North runway. I felt asleep when we were off.

Beverage services immediately started after the seat belt sign was off. As promised, the FA firstly served those 1K members who also had a pack of free snack provided.

My turn. I asked for water.

I tried the United Wi-Fi and it worked (where I could not use the NH one on the 1st flight). 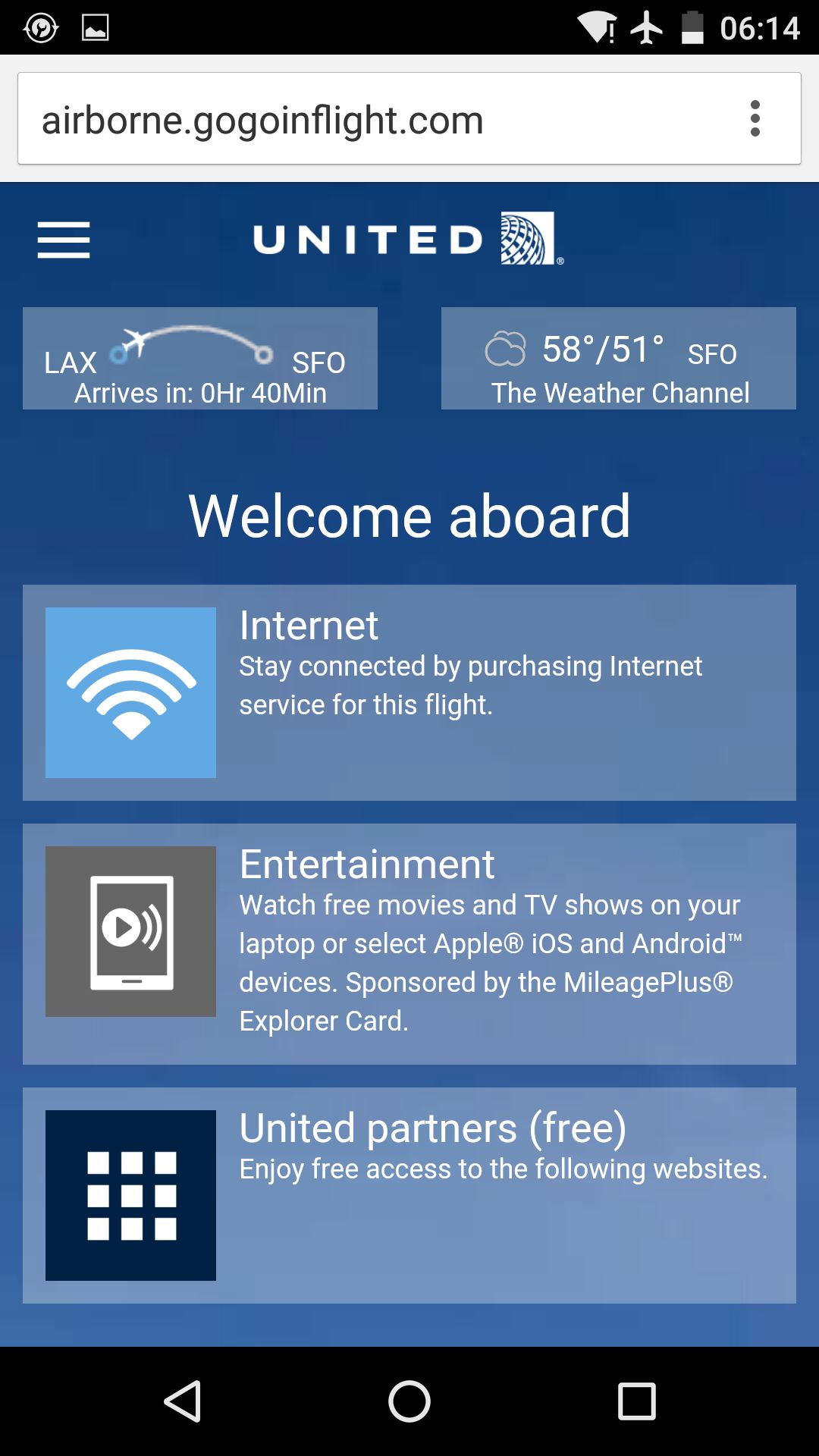 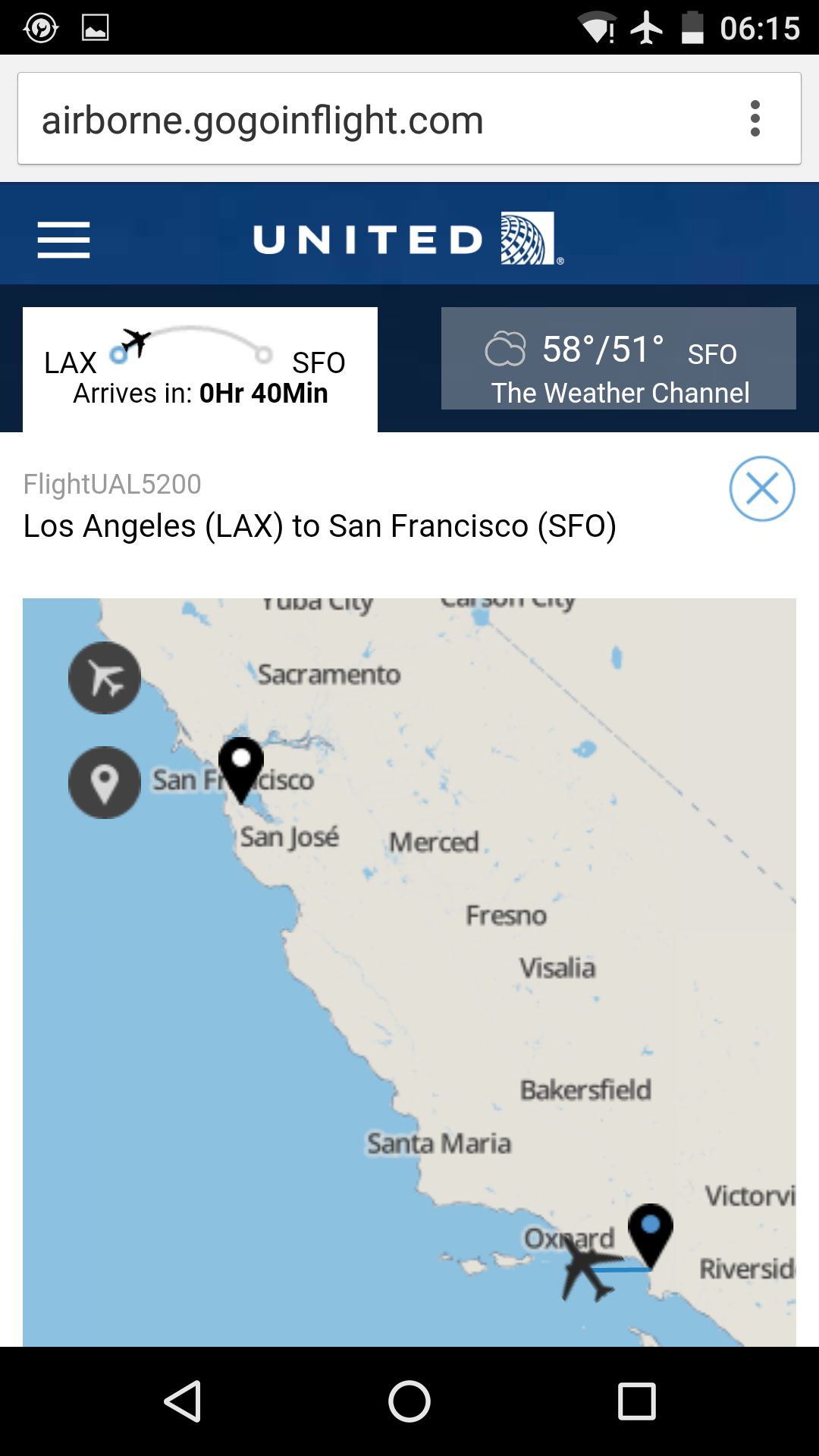 It also features some TV shows. 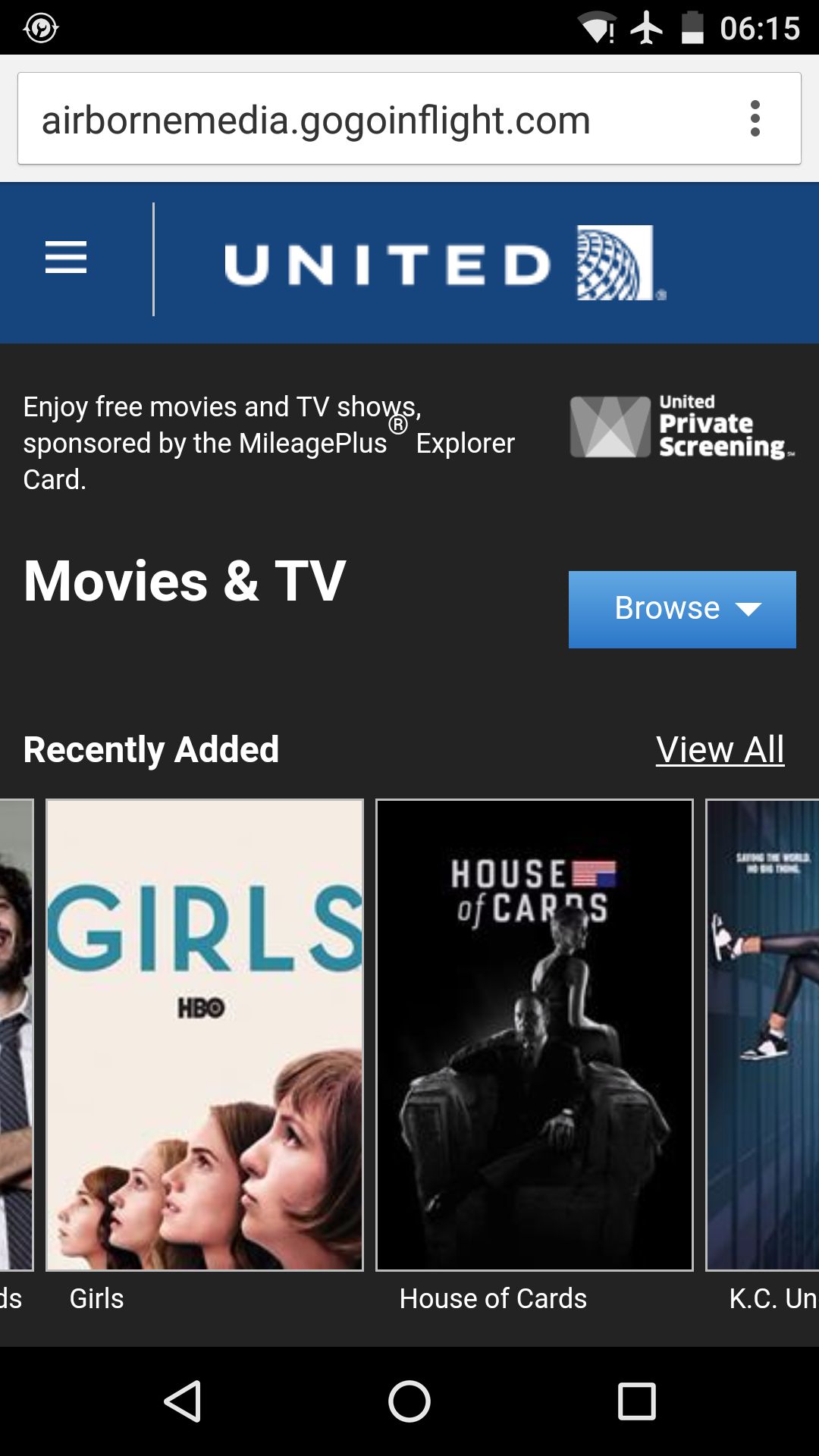 Although I slept on my previous flight, I still felt a bit tired on this so indirect itinerary to SF. I went to the front toilet before having another nap after the beverage service. It was so-so but clean.

I woke up when the plane already started decent.

And we landed from the South shortly.

We arrived at our gate. View from the wing. The weather in San Francisco was not good today. Drizzling

Seat belt signs off and the passengers started picking their belongings.

But after a 10 minutes wait, he announced that the airport made mistake and we were at correct gate lol

Last view of the tarmac

Arrived at the recently renovated United Terminal at SFO

The baggage claim. My baggage was already here.

I picked my baggage, exited the terminal and waited. SF was much colder than LA…

Soon my company car arrived. My US colleague drove me to the hotel. I had a quick shower, changed my clothing and met my colleagues to have a business dinner.

Every year I have part time job in HKG during Chinese New Year. The HK Airport Authority dumps a lot of $$$ to promote CNY. CEOs of CX, KA, HX, UO and HKAA attended the CNY opening ceremony on the 1st day of CNY

As usual, there were lion and dragon dance performances inside the airport everywhere.

But this year was a bit special. They also had a booth for tourists learning and playing the lion dance which lasted for 2 months starting from January!

A booth game. Tourists need to use chopsticks to pick the “food” for prizes

There was also dancing cappella performance. But It was a very demanding job. Please imagine you had to sing and dance 36 times in 6 hours each day, and it last for a week lol

The FIDS stand with CNY decoration. (2016 is the year of monkey)

Some peach blossom close up

In order to kill time, plane spotting was necessary (I am a hard working staff :P ). A BA B77W just arrived, where her relative A380 and an AY A340 parked at the adjacent gates.

It is so simple but iconic!!!

A CZ A330 with special Asian Games livery

There are several NH planes departed in the afternoon every day.

A NZ B777 with new livery (very uncommon in HKG). A CX bird just took off in the background.

One day afternoon suddenly many fire engines rushed to the HM plane with unknown reason. Boarding even stopped but boarded passengers did not deplane.

The new CX livery on a B77W

An UA B744 preparing her flight to SFO

Sunset in the airport

Outside the terminal, this is how HKG recollects the baggage trolleys


This is the third part of flight report and please stop by the end of this series! Now here is a glimpse of next report: Queen

Thank you for your reading!

Another standard US domestic flight. The cabin and toilet are clean while seat pitch is good. No IFE but has an accessible Wi-Fi. A bit late arriving SFO. Standard crew services, but it would be better if you are 1K member.

For SFO, the renovated UA Terminal looks bright, spacious and clean. It has clear guidelines for passengers.

The airline with the best average rating is Virgin America with 7.9/10.

He wrote 24 reviews about 7 airlines and 16 airports.