#75 out of 142 Airlines A minimum of 20 Flight-Reports is required in order to appear in the rankings. 451 reviews

By ShamrockGoldCircle 2934
Published on 24th July 2016
Hi all, welcome to my sequel to my outbound trip from Dublin to New York JFK in June 2013.

This part covers the transatlantic flight of the return journey, American Airlines from New York JFK to London Heathrow. I'd later connect onto British Airways to fly home to Dublin.

After too short a stay visiting friends in NYC and The Hamptons, it was alas time to go home. Taking the Long Island Rail Road from Montauk to Jamaica Station. At Jamaica I took the short 10 minute JFK AirTrain ride to Terminal 8, home of AA at JFK.

T8 was very busy, with queues at almost all check-in desks. AA staff were on the ground directing people toward self check-in machines which apparently everybody was being asked to use. A number of people seemed to be having issues using the machines and there was certainly a lot of frustration.

I had 18L in Main Cabin Extra prebooked for the JFK-LHR leg, but had to choose a seat for my BA connection at LHR here at the machine. After checking-in, the machine printed out baggage tags which I attached to my luggage and dropped it off at the baggage belt.

The meandering queue for security took 30 minutes to pass, although the security screening process itself was efficient and without delay.

WIFI access wasn't great (this was July 2013, anybody know if it has since improved ?). Aside from the Admirals Club signal the other connections were poor at best, and I struggled to find power sockets to charge my phone and laptop. Food prices in the food outlets were extortionate, although I did very much enjoy the views of AA ramp operations - particularly of the 777s in both old and new liveries. 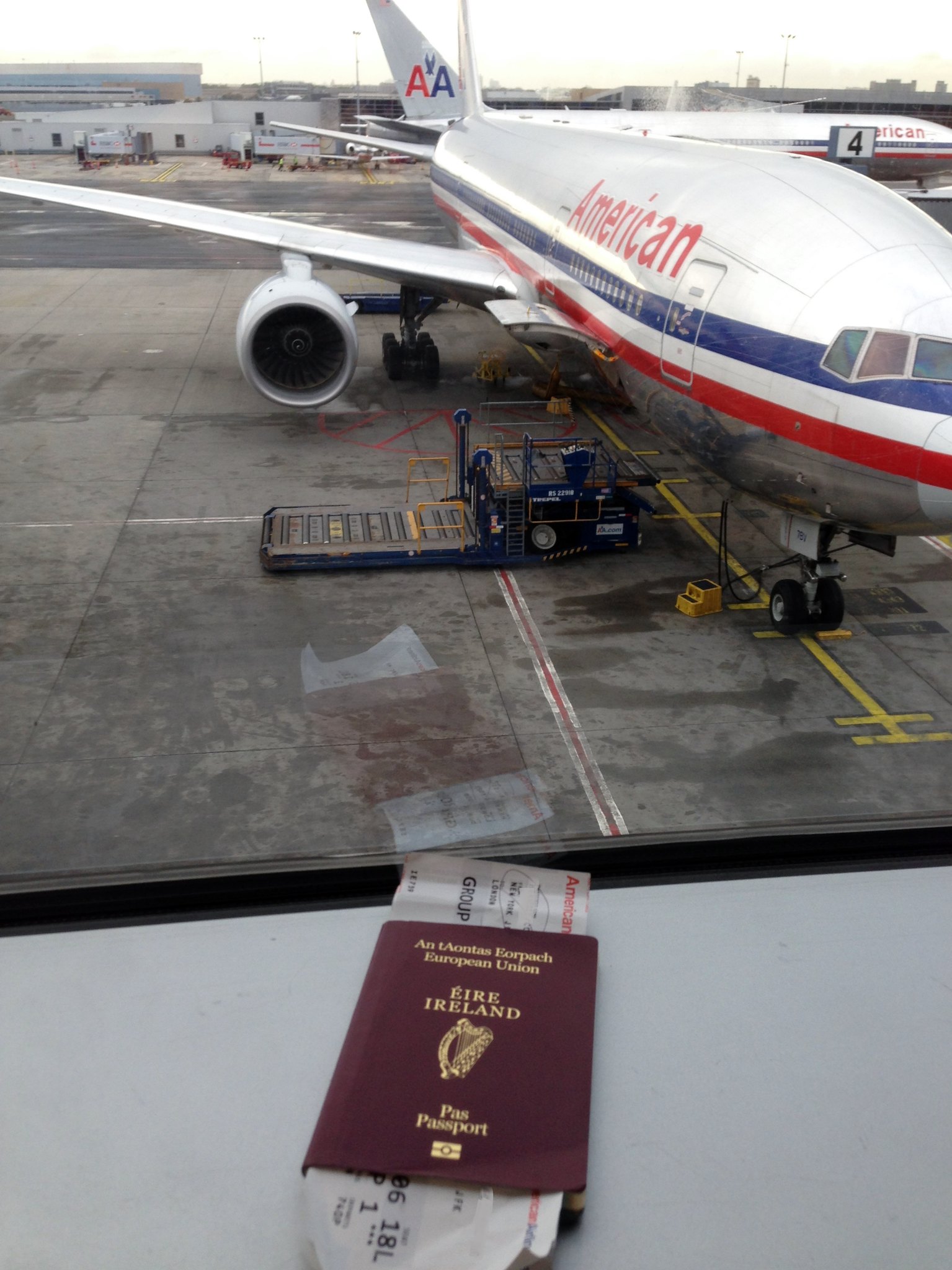 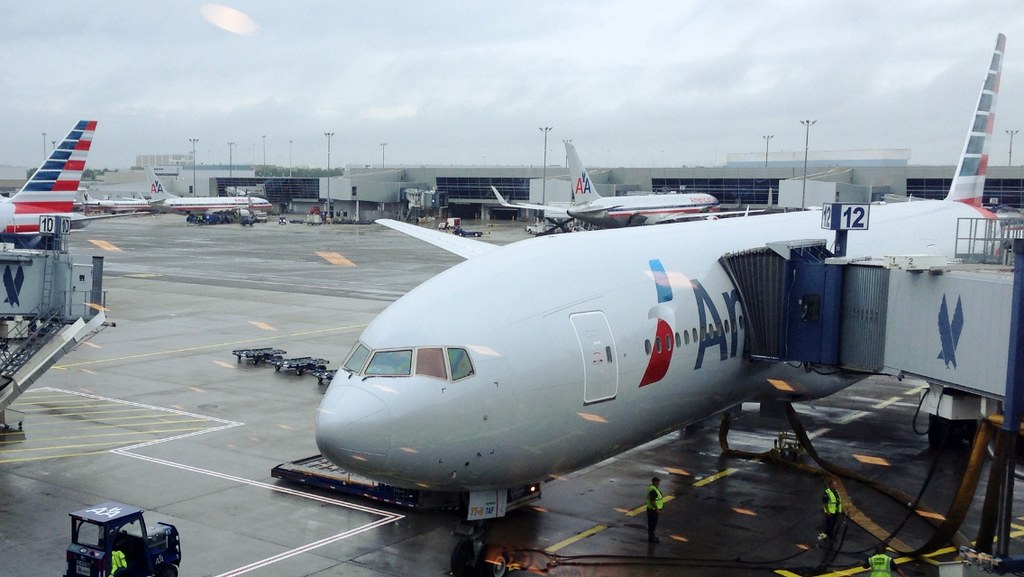 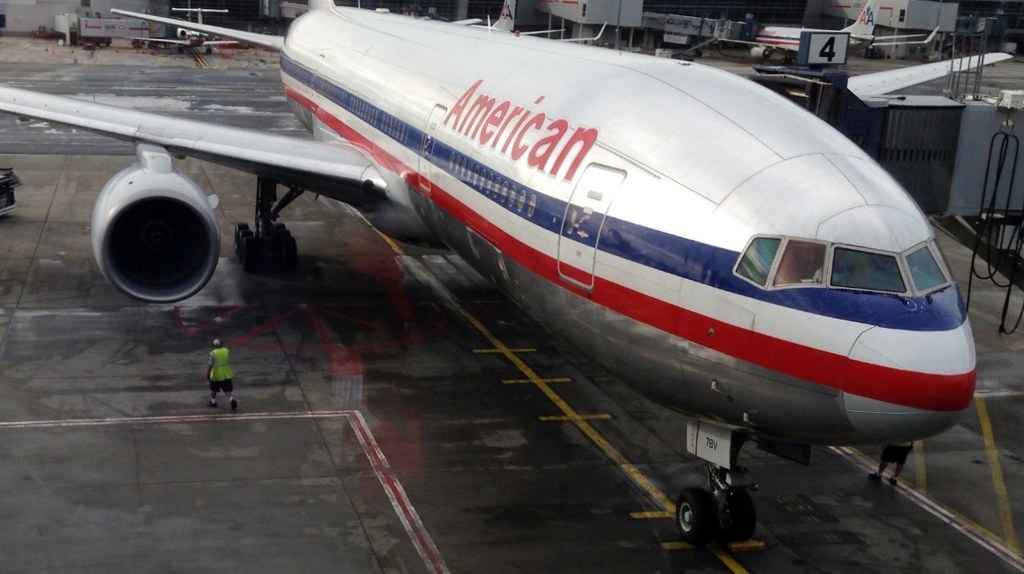 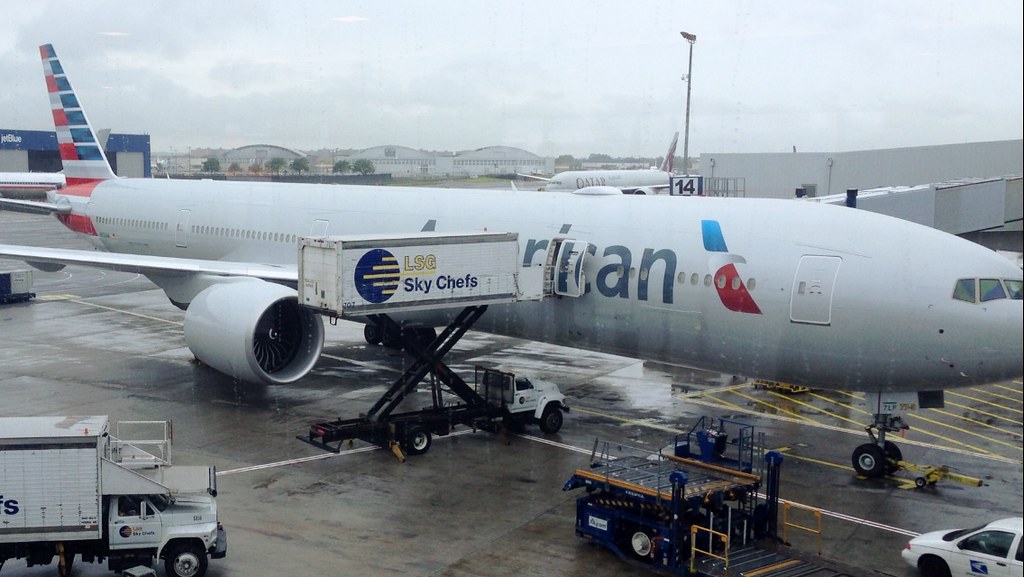 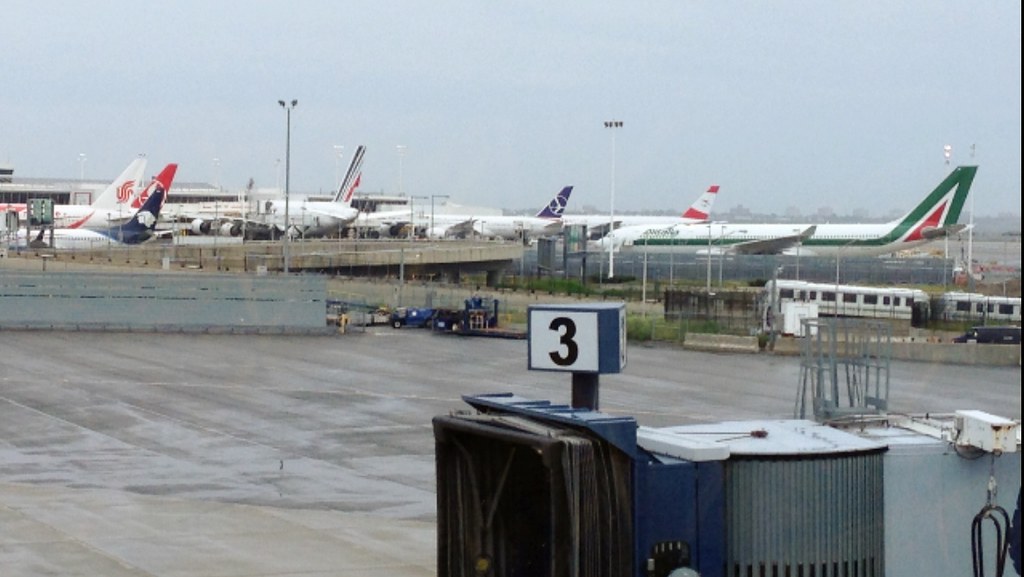 I came across the boarding gate for flight AA291 to Dublin. On this day I'd be taking the scenic route to Dublin, via London Heathrow. 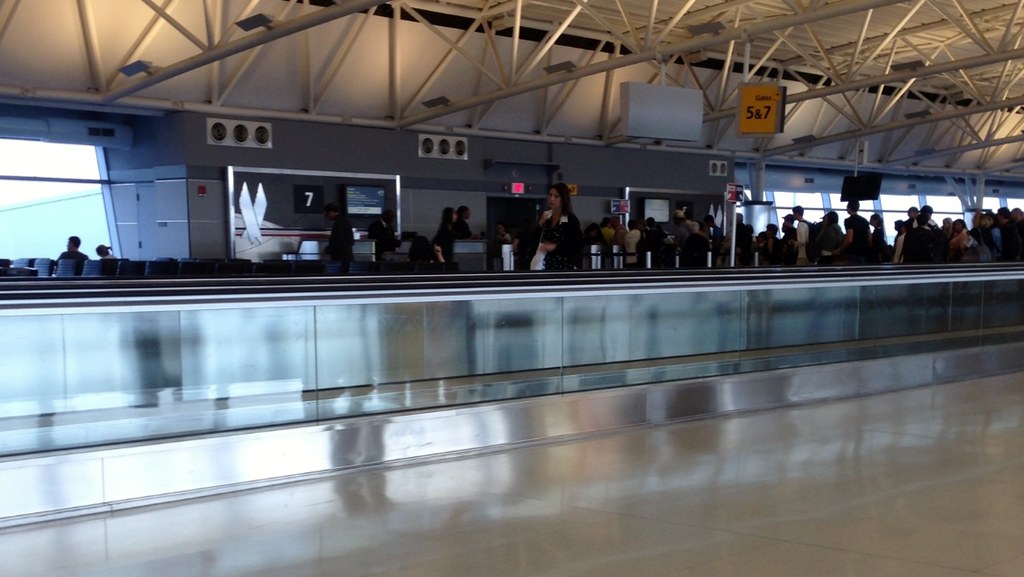 When I got to my gate I was delighted to see that my ride to LHR would be AA's very first 777-300ER, registration N717AN. 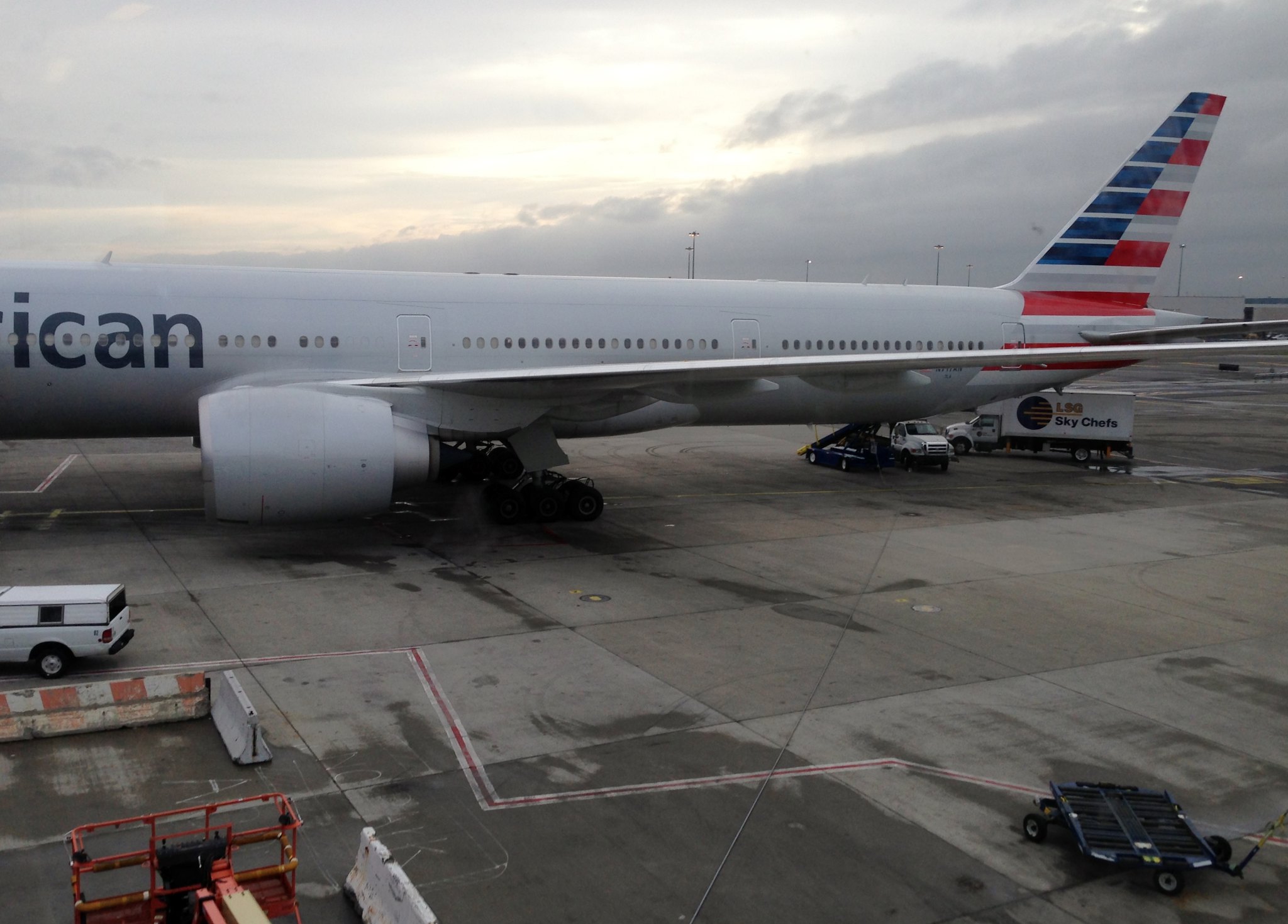 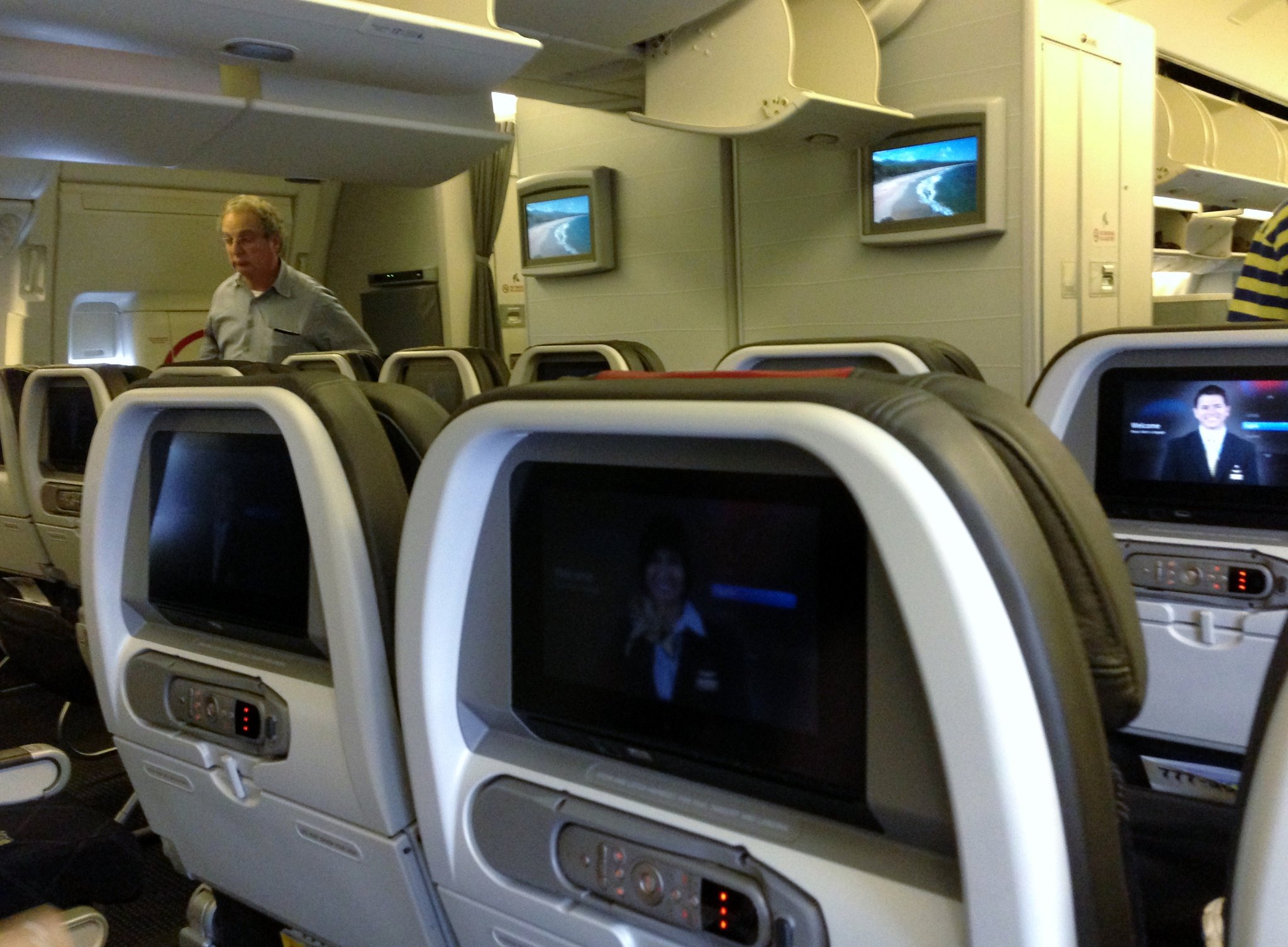 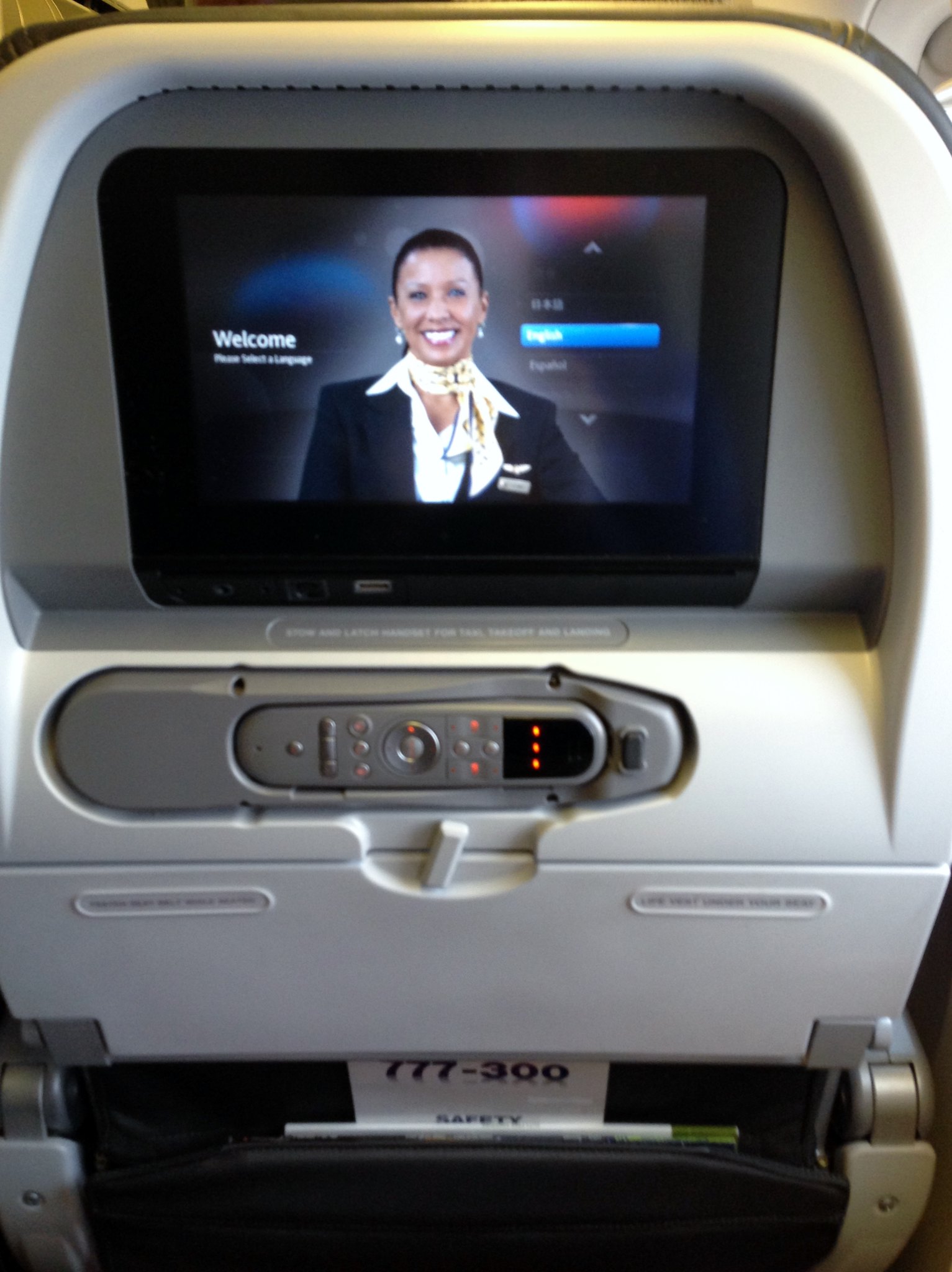 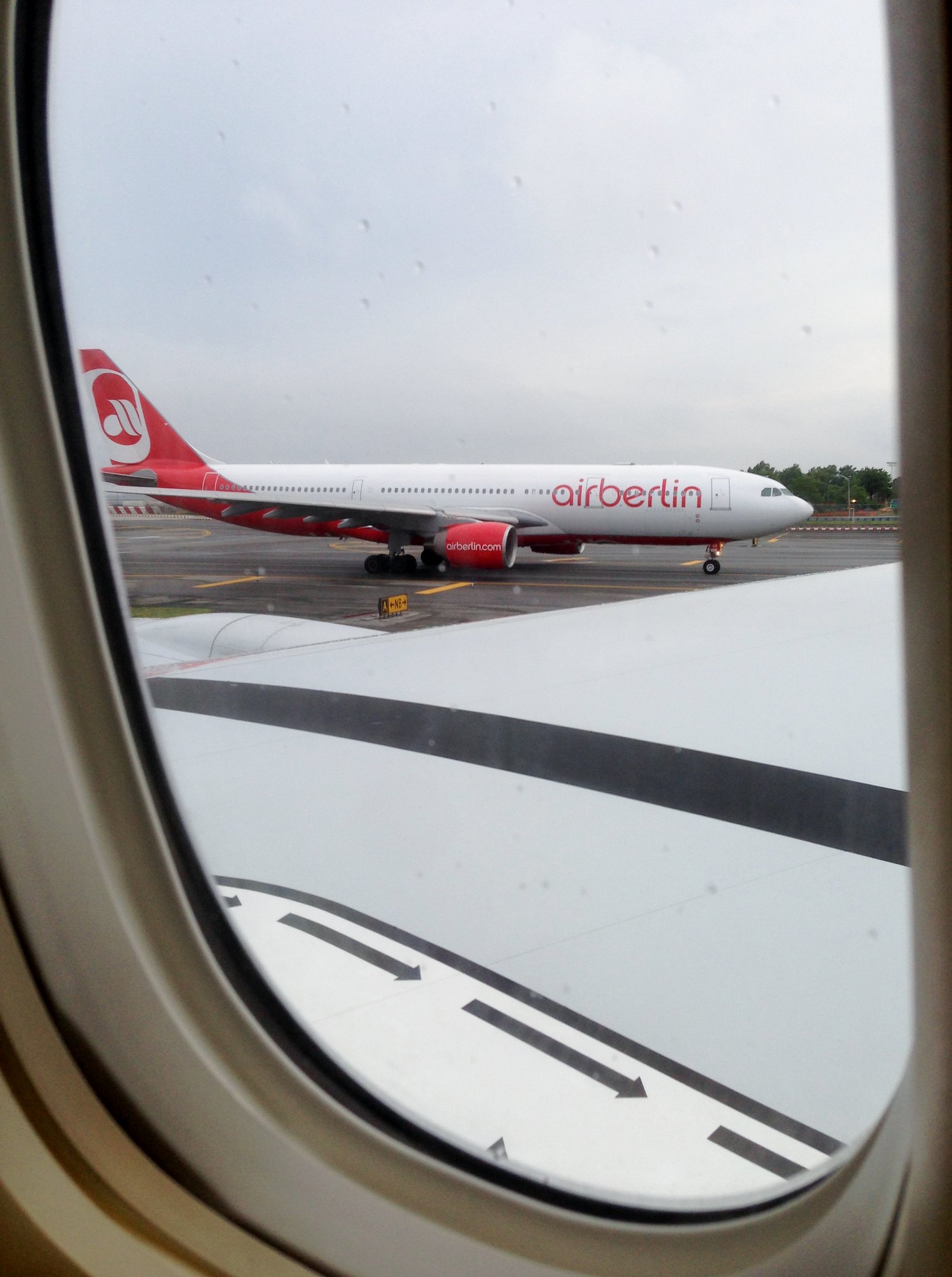 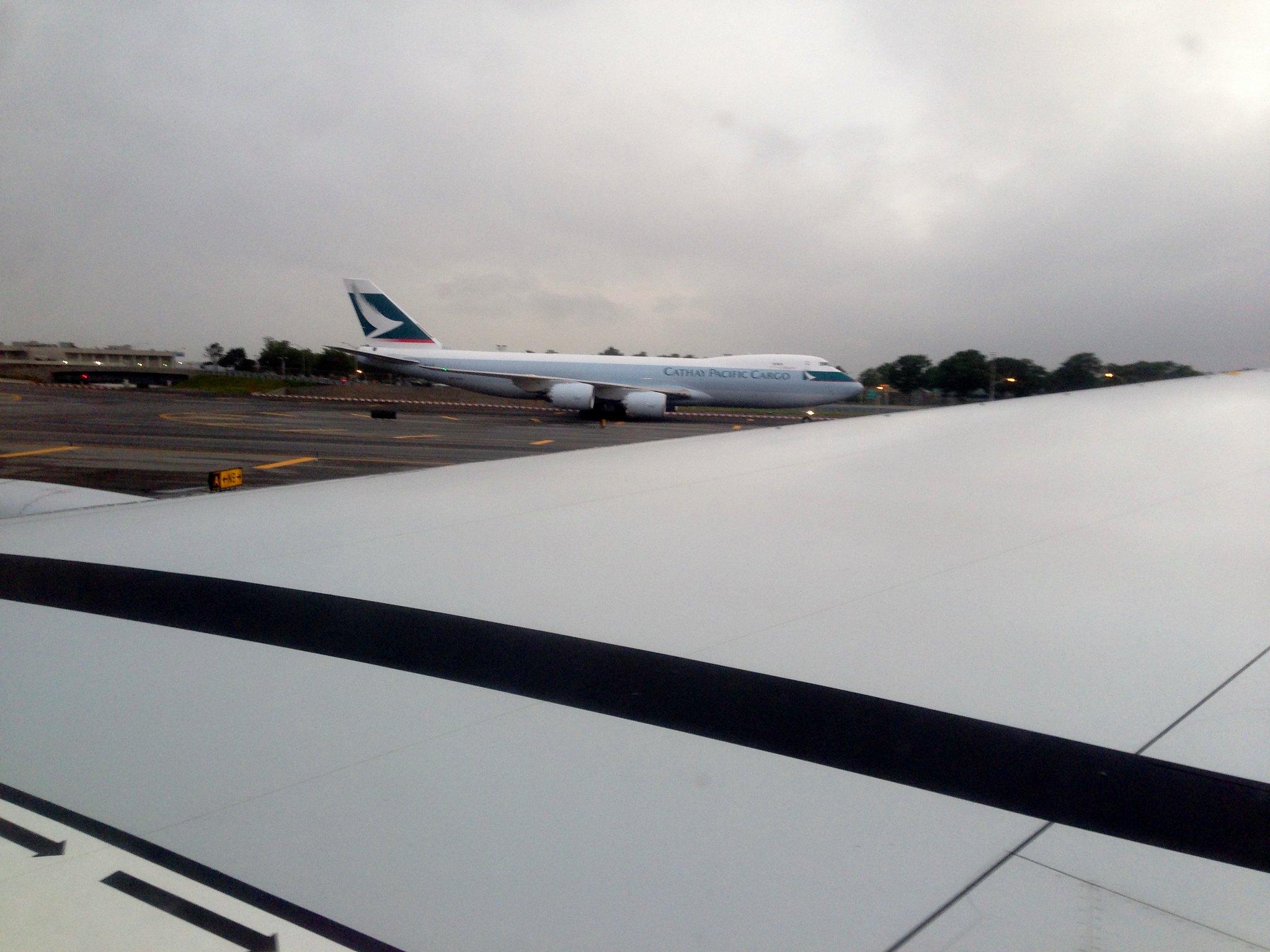 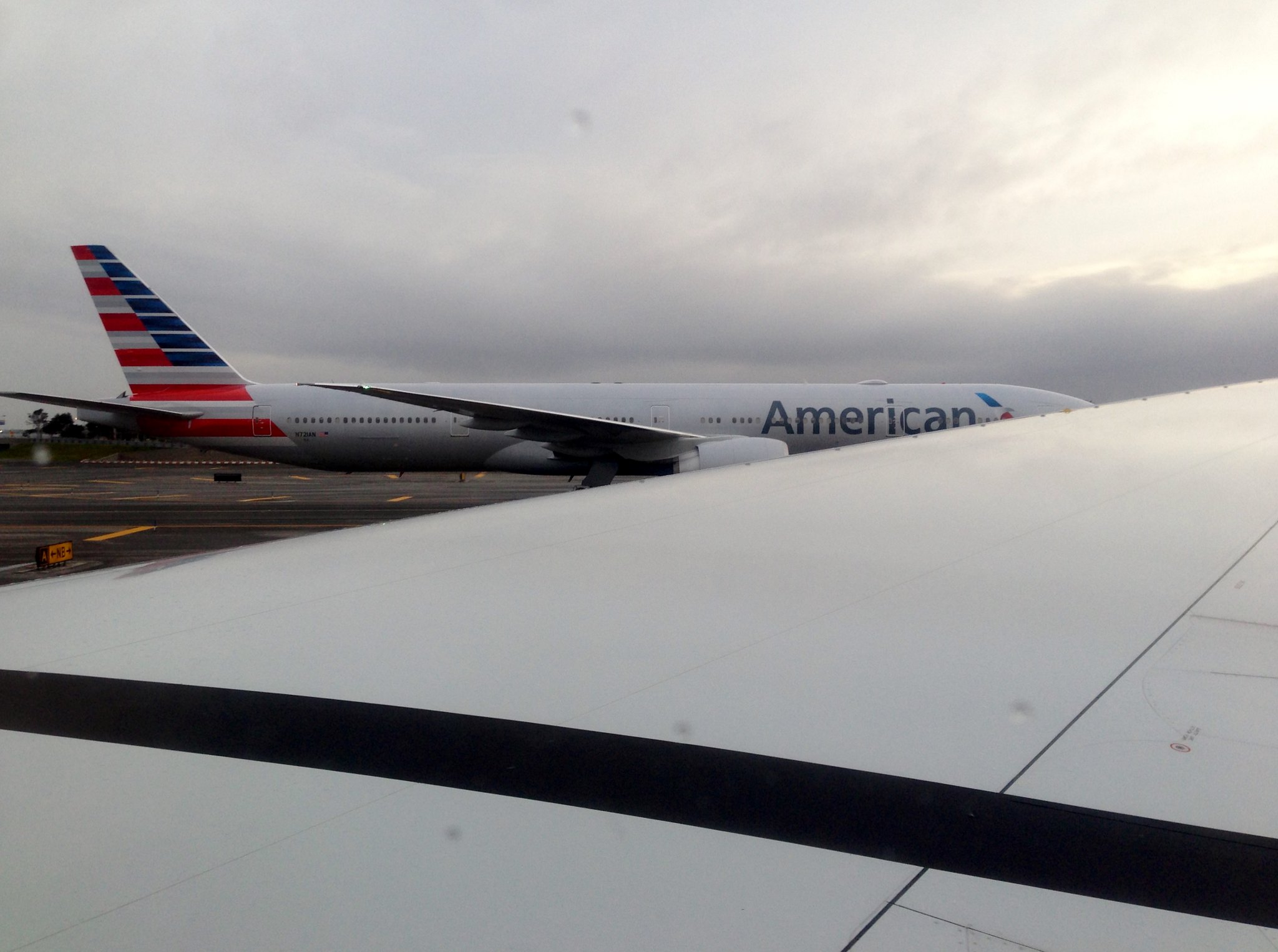 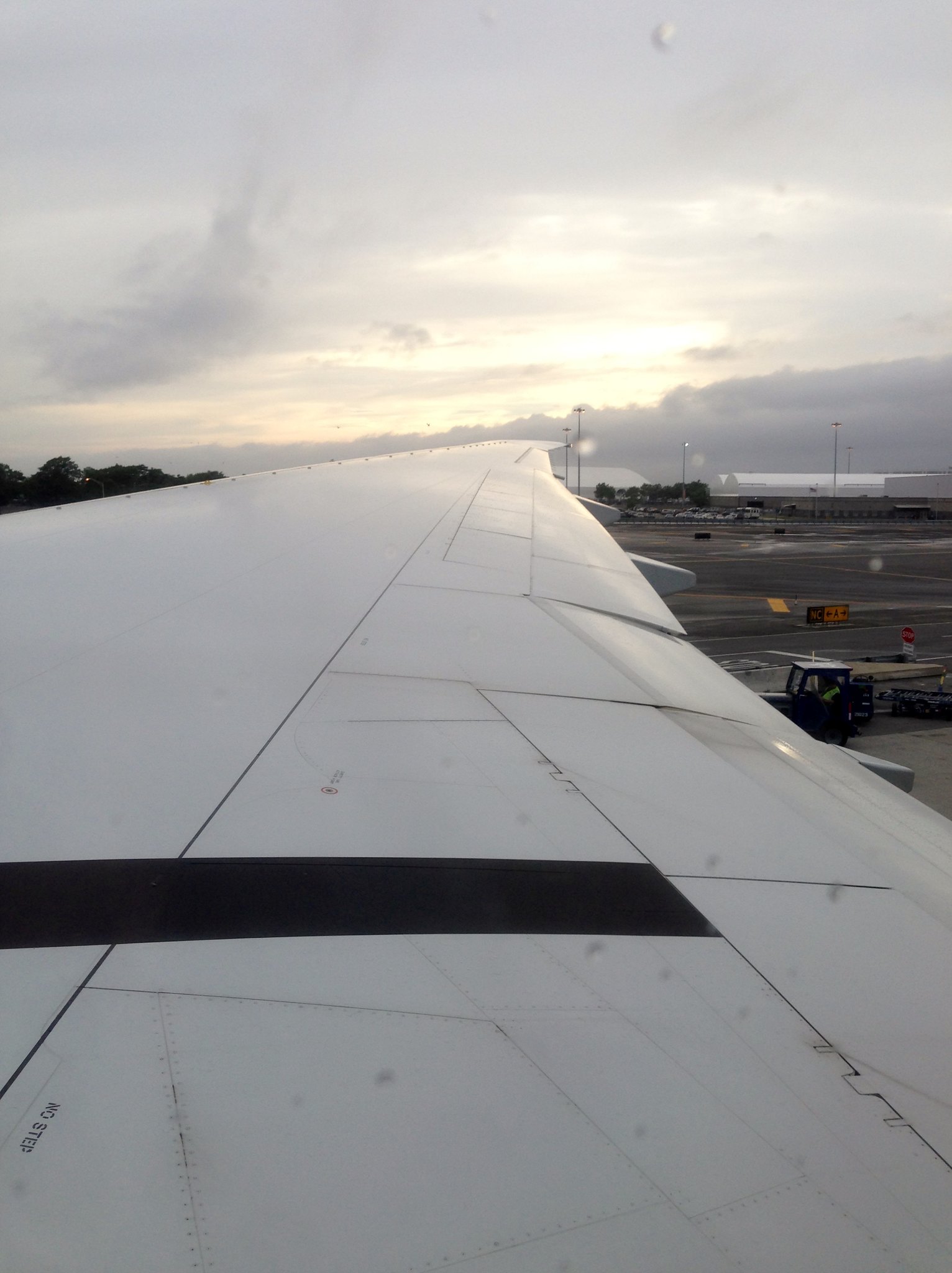 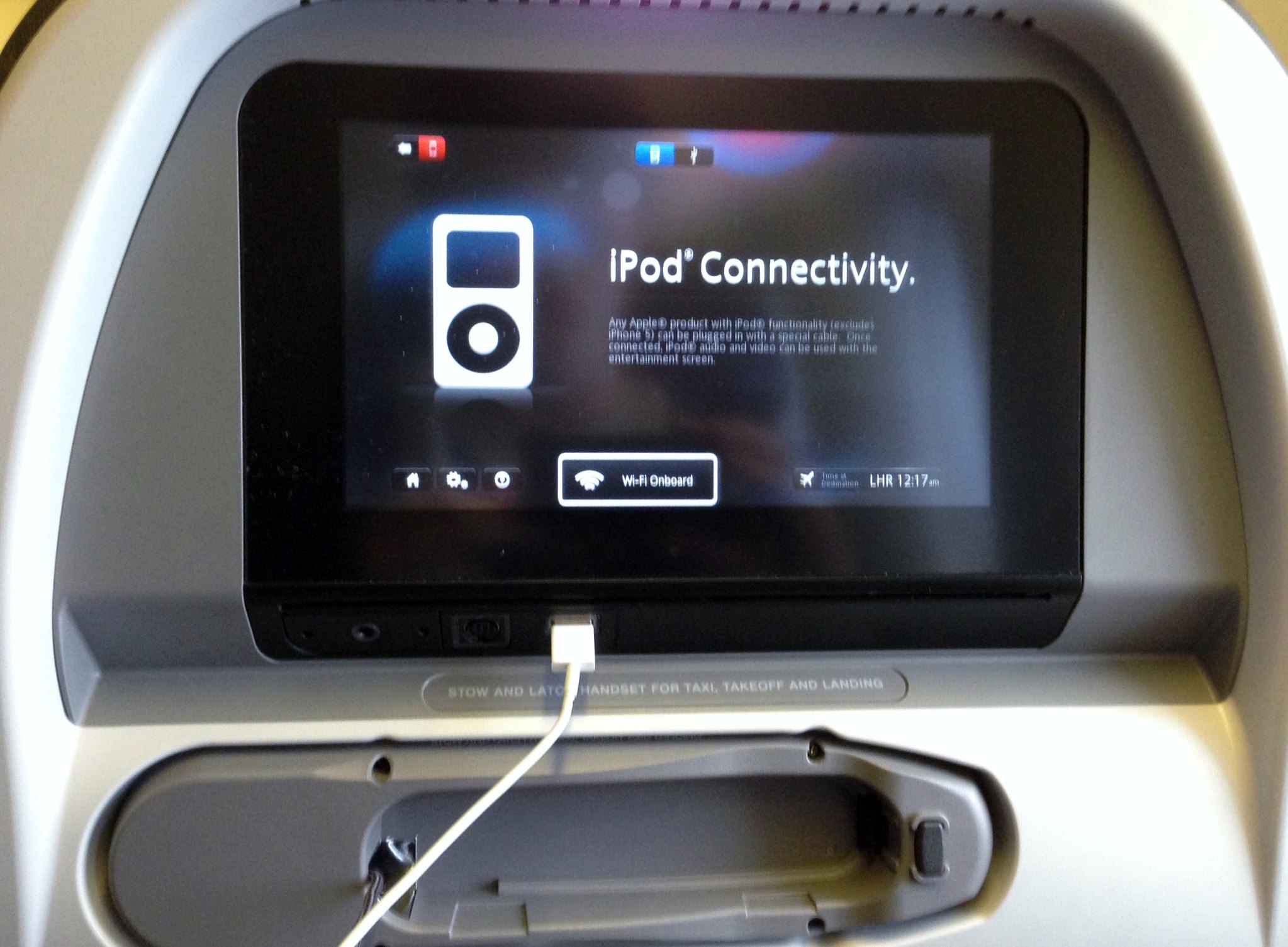 I really liked the cabin product. Being only a few months old the aircraft still felt fresh, with stylish colours and textures used in the seats and cabin decor. The Main Cabin Extra section is in 3-3-3 configuration - as opposed to the 3-4-3 of the Main Cabin. The premium charged for this westbound transatlantic sector I feel was very reasonable.

Taxi time from the gate to the runway was approximately 40 minutes, with a large queue of planes waiting to take off.

A video of the takeoff is available here. It was exactly sunset and so was quite spectacular to watch: 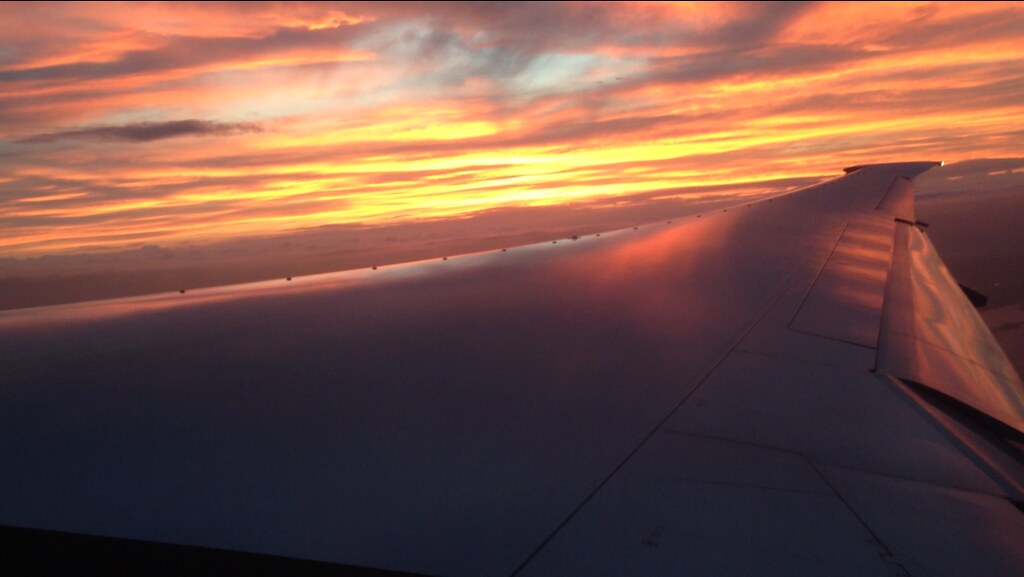 I took advantage of the in-flight WIFI which was available. It was very fast…while it was working! From around approx. 2 hours before landing the inflight map froze and the WIFI stopped working. No explanation was given. Did/Does this happen regularly ? 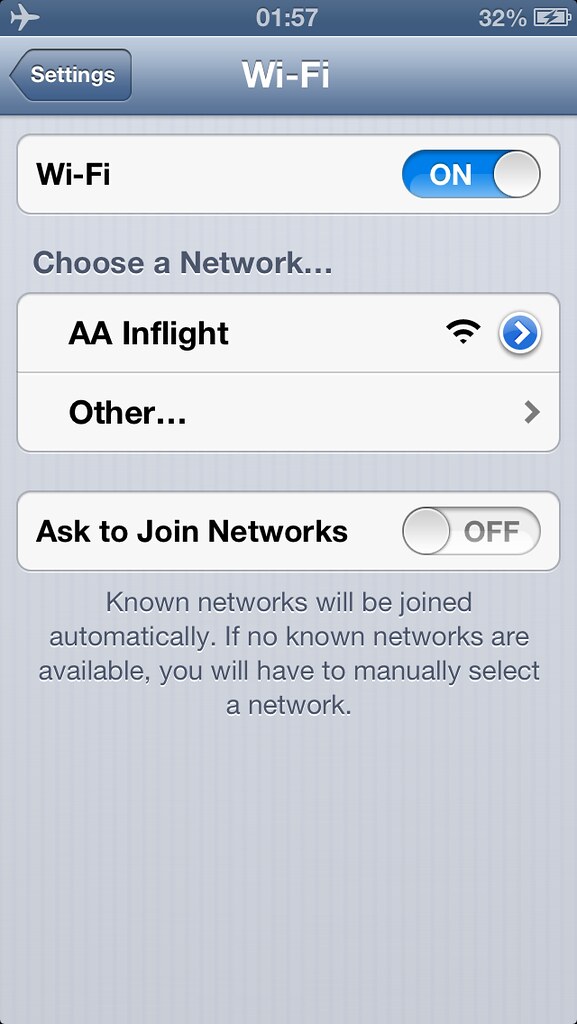 Dinner service was up next. It wasn't bad, but as always I had to warm up the freezing bread against the boiling heat of the pasta. Otherwise, the meal was satisfying, considering what one would expect to receive in Main Cabin. 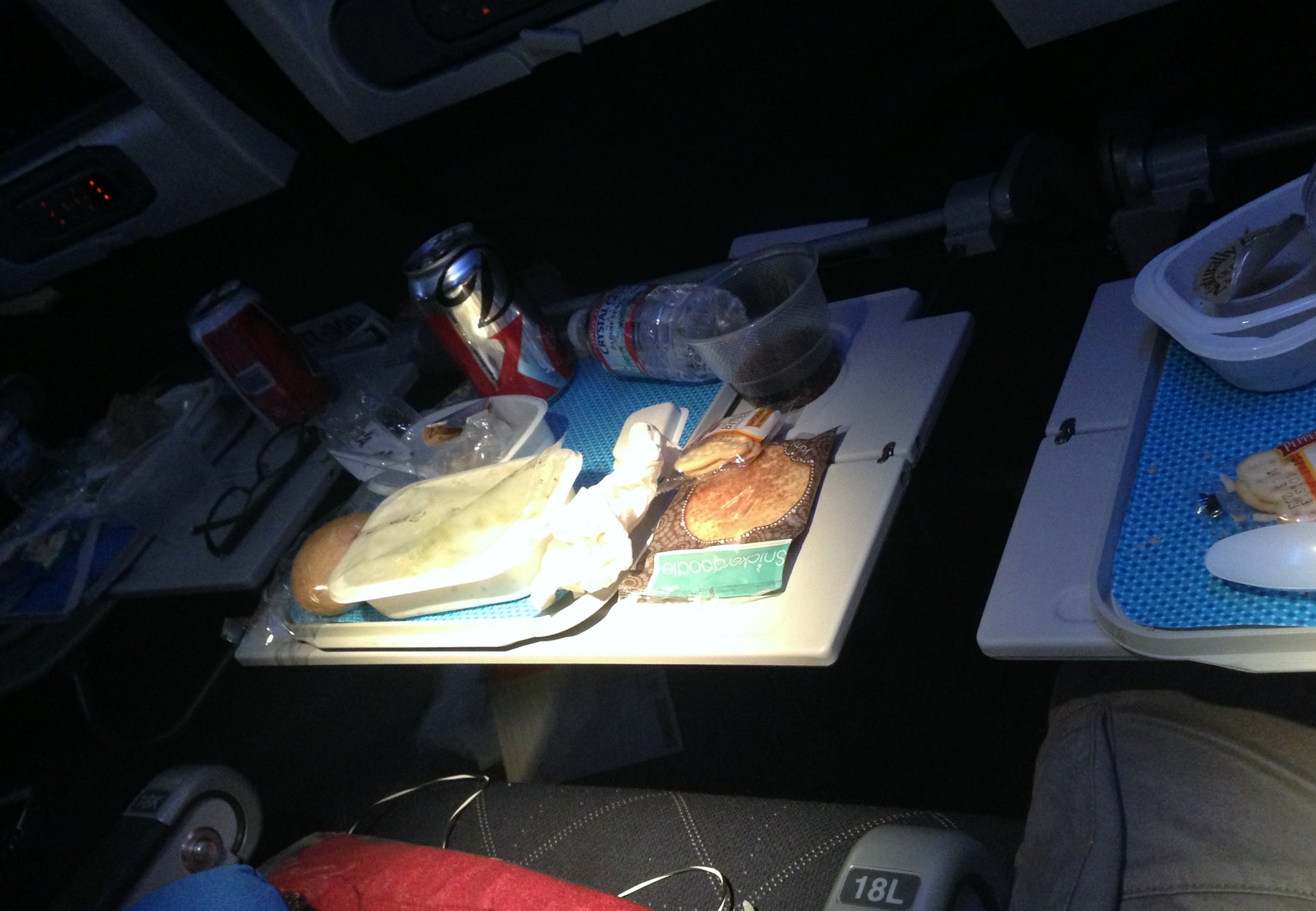 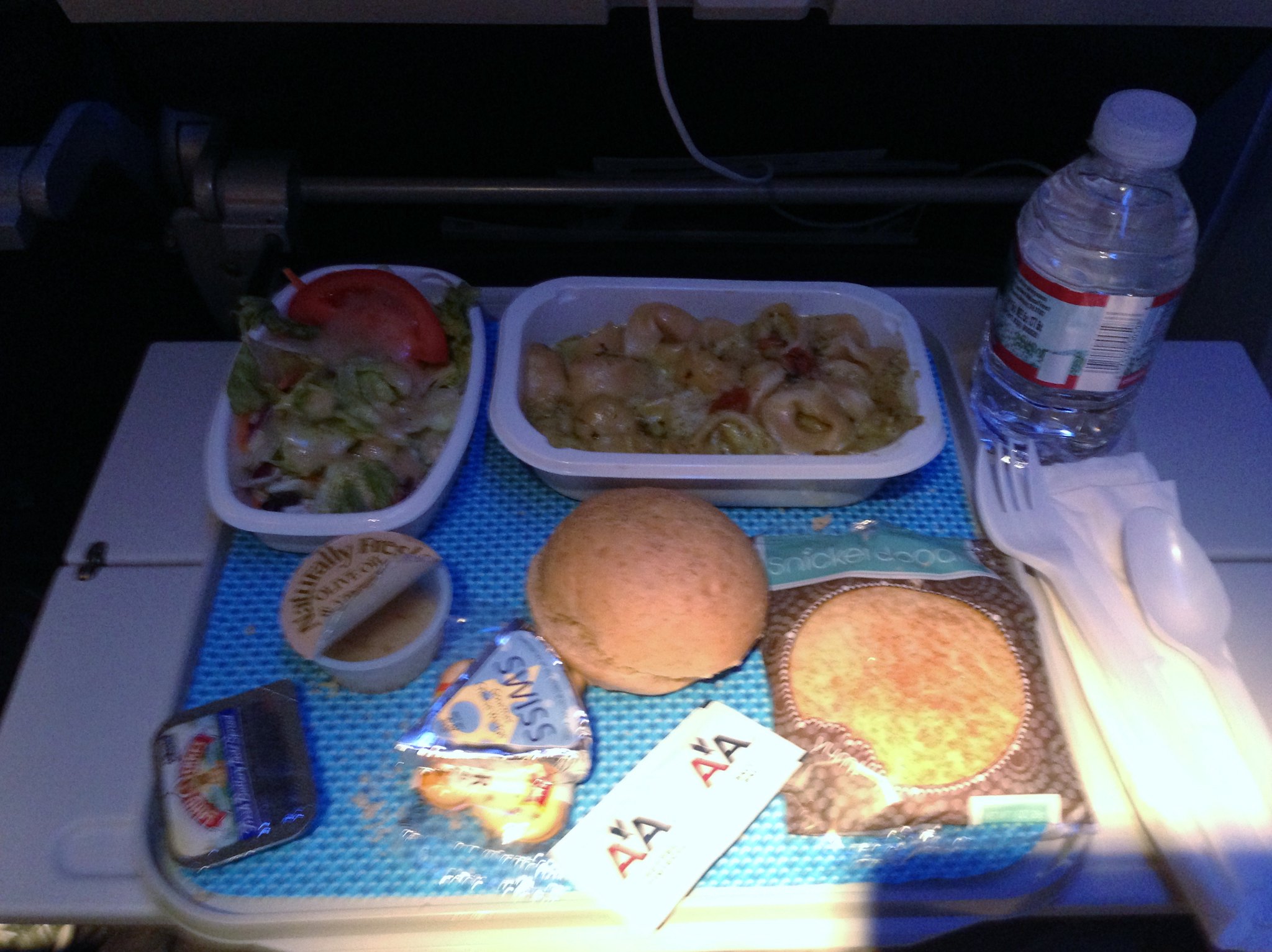 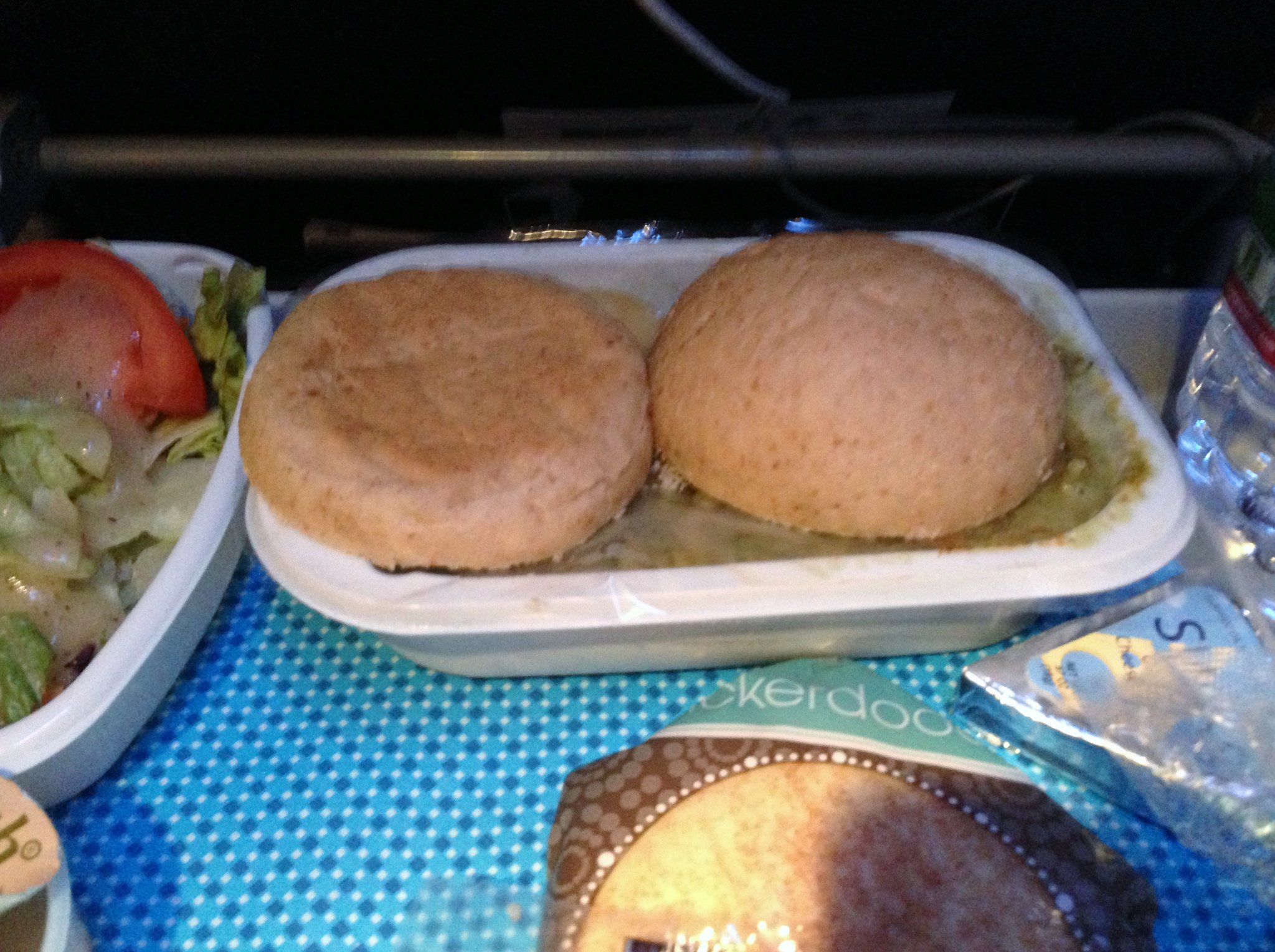 The cabin lighting was then dimmed to allow people to sleep. 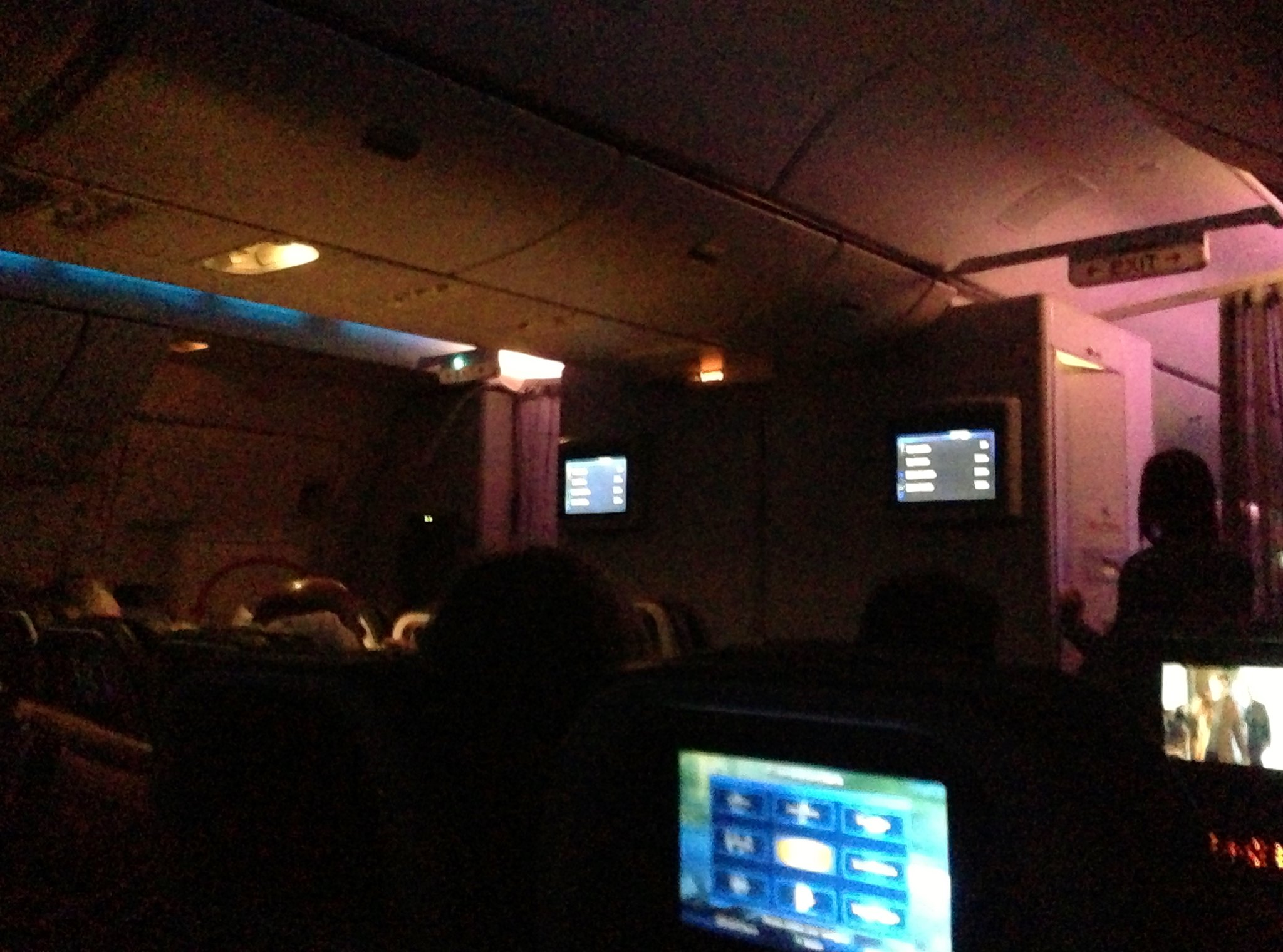 Breakfast was quite basic, as one would expect, and was served as the sun rose. 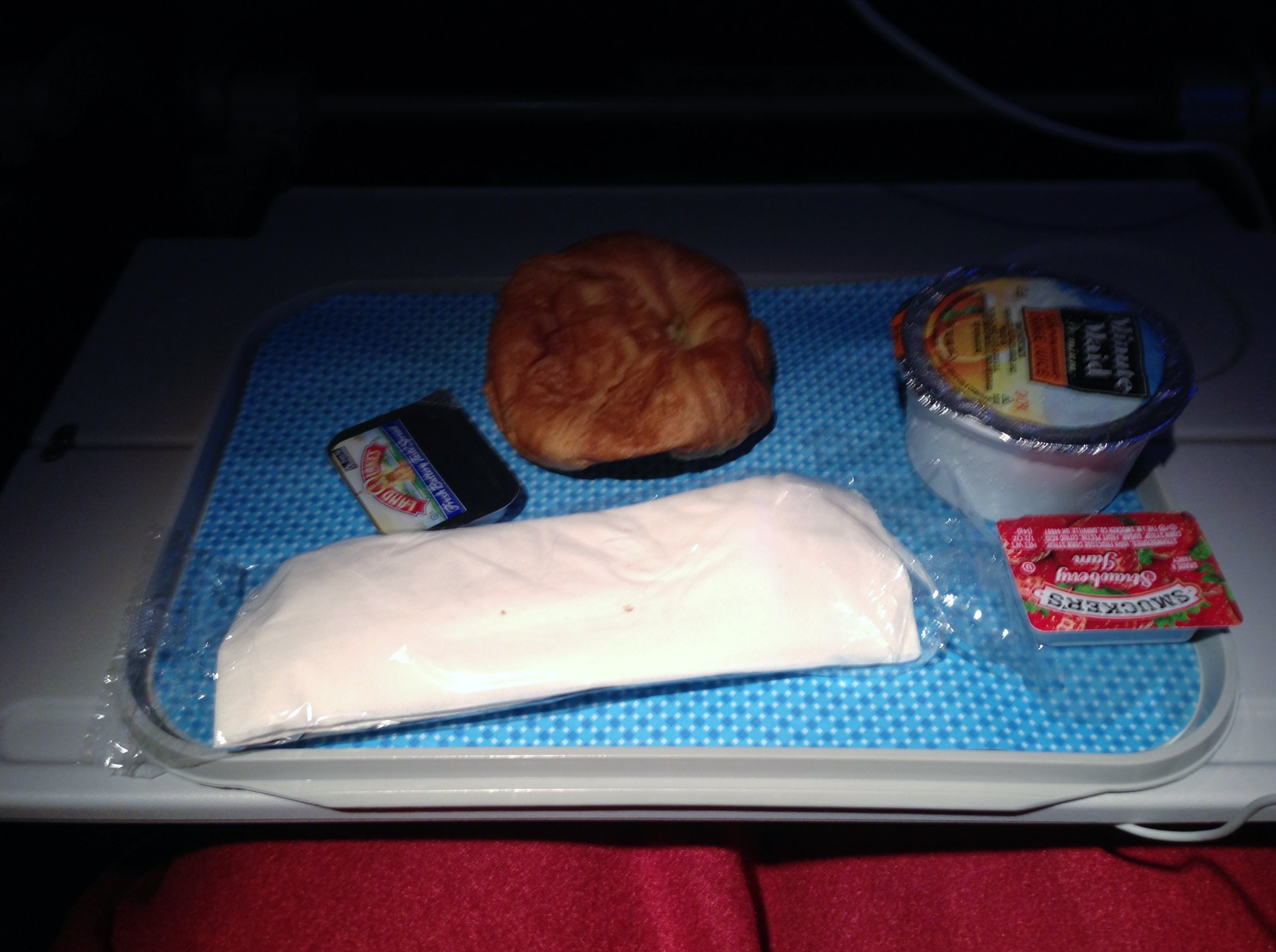 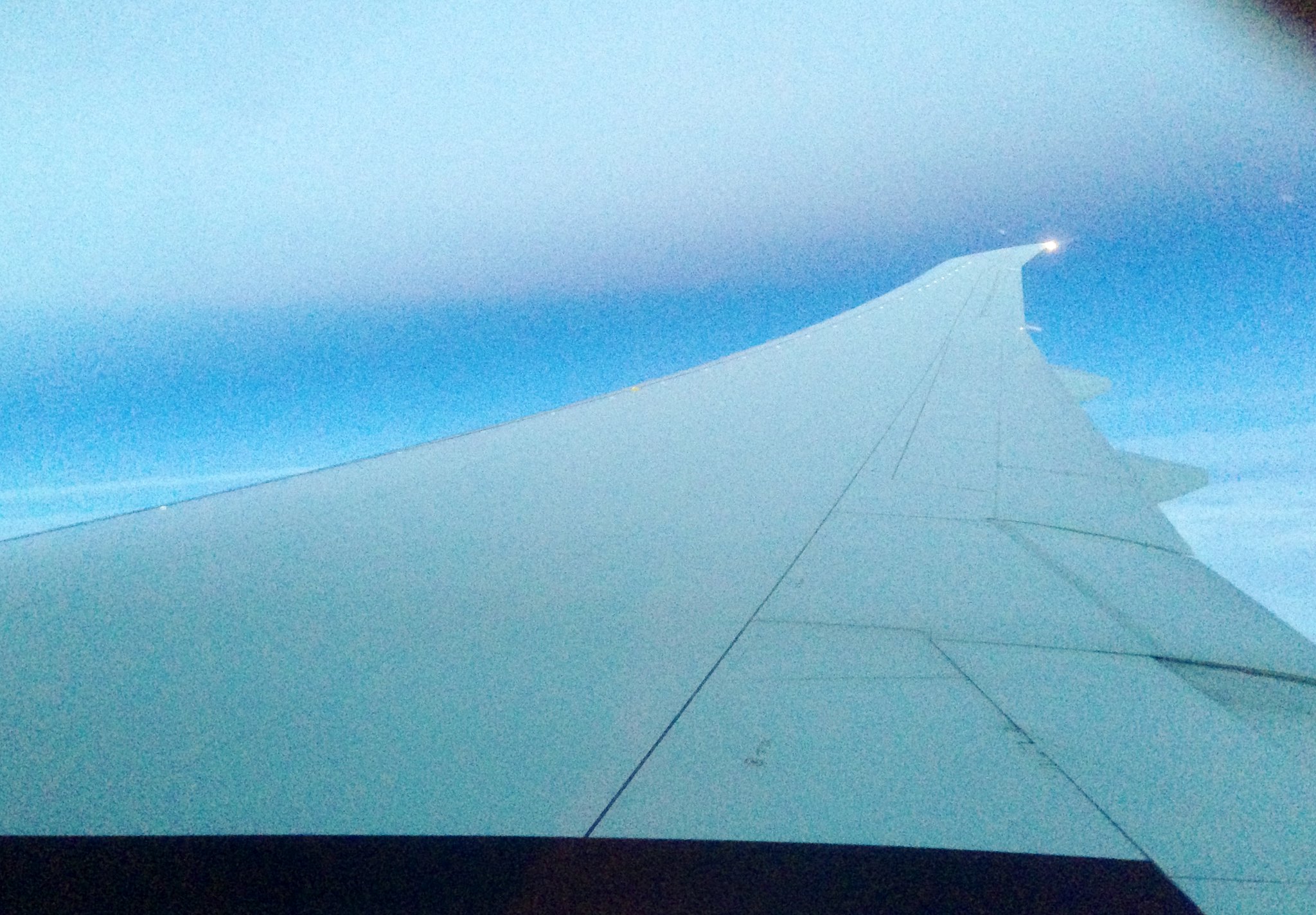 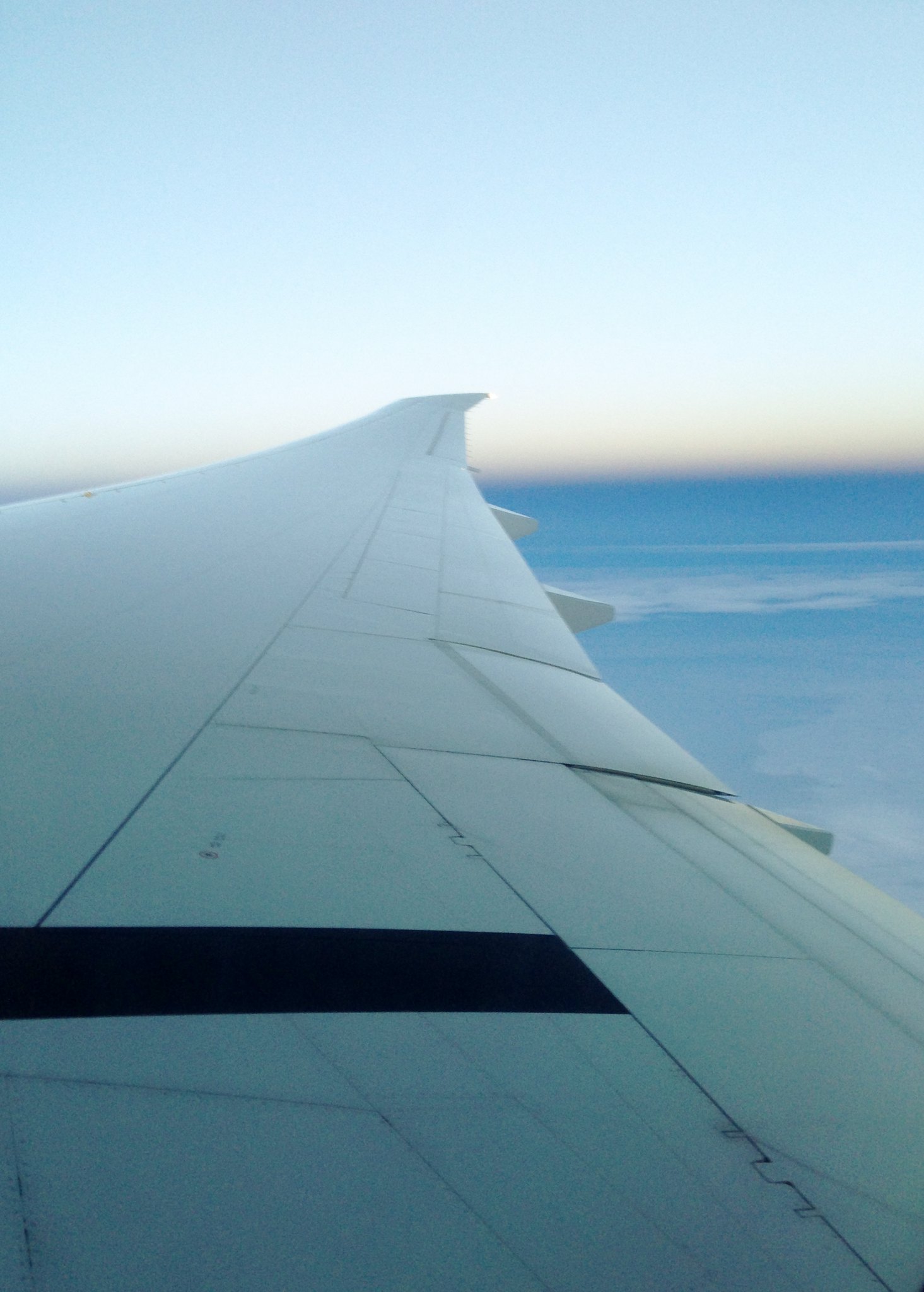 Circling as we wait for clearance into Heathrow. 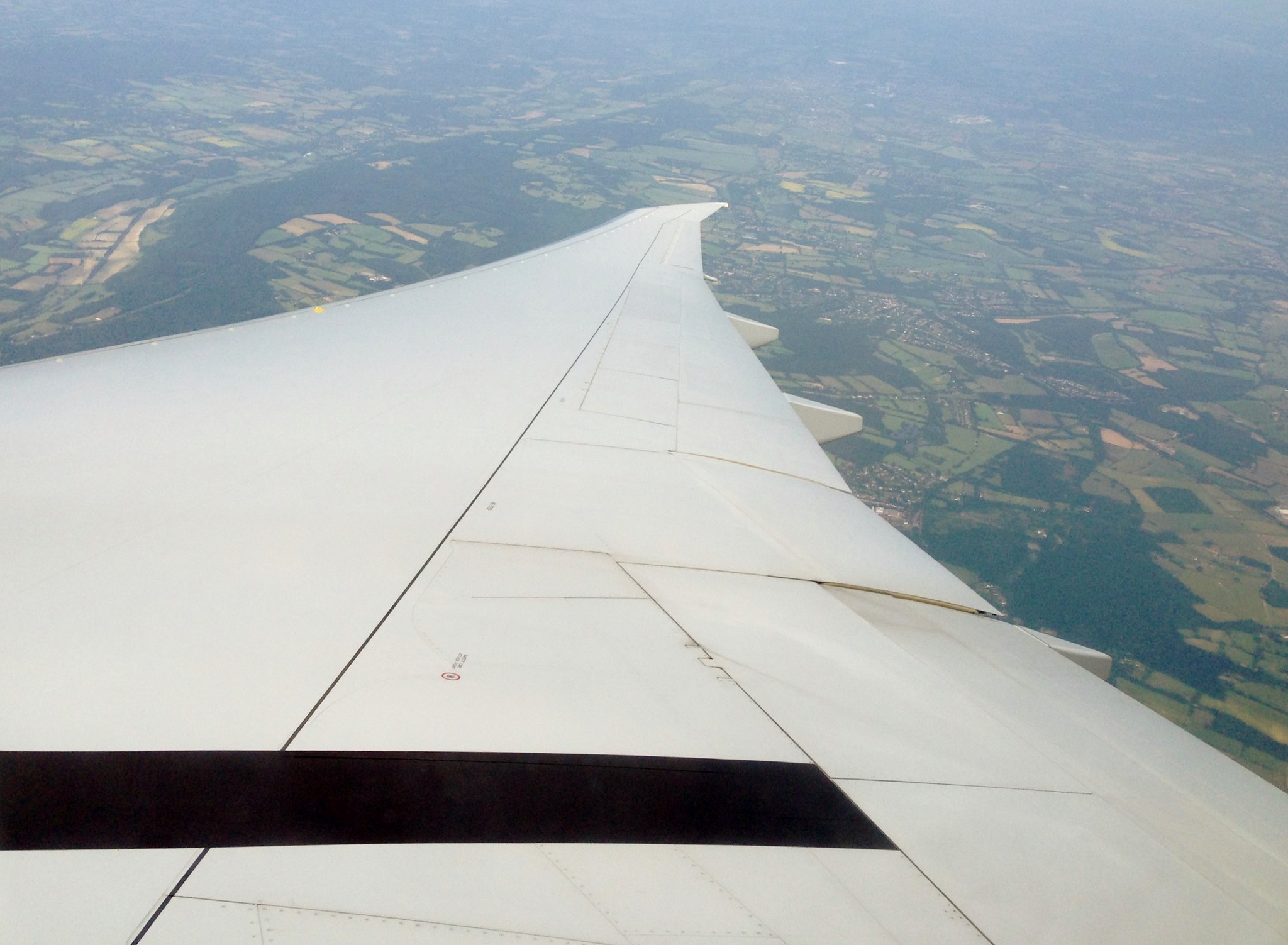 The video of the slightly windy landing is here:

My final view of N717AN as I disembarked at Heathrow's Terminal 3. 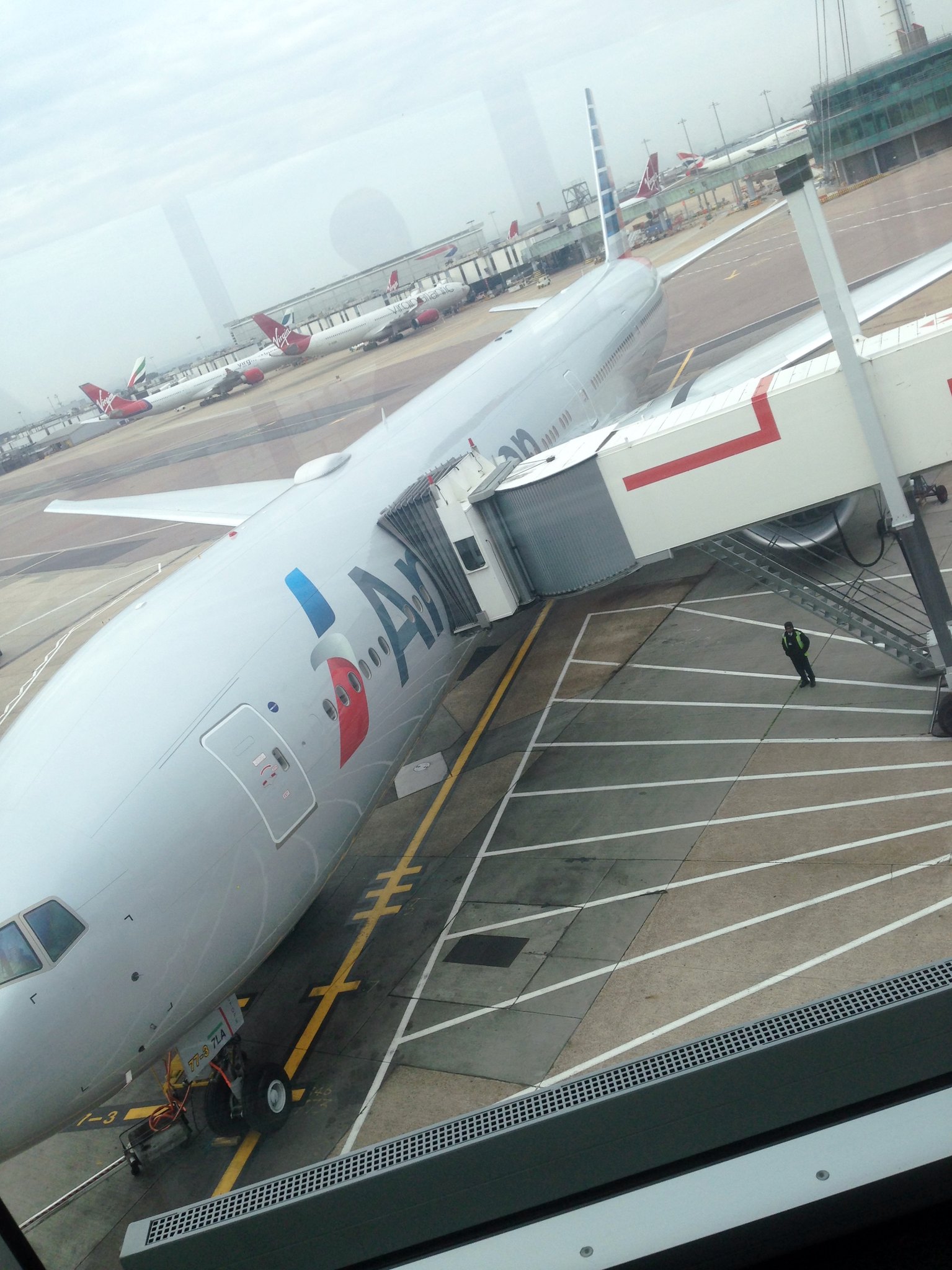 In comparison with the obsolete interior on the AA 757 on my outbound leg, the product on the new 777-300ERs is naturally far superior. The service on AA was quite good, however I was rather tired and perhaps should have taken a direct EI flight JFK-DUB.

The contributors of Flight-Report published 28 reviews of 4 airlines on the route New York (JFK) → London (LHR).

The airline with the best average rating is Virgin Atlantic with 8.0/10.

The average flight time is 6 hours and 56 minutes.