#25 out of 79 Airlines A minimum of 10 flight-reports within the past two years is required to appear in the rankings. 5548 reviews

By TBloemink 3936
Published on 28th September 2016
Hi folks. Just a quick intro telling you that the pictures in this report were not made with a professional camera and some of them are not horizontal. This is because of the time I took making them. I make them for a memory instead of making a report and some of them were saved for sending to others on my phone. These are unedited and I am using them to tell you about my experience. I hope you don't mind.

Initially I had booked KLM to Los Angeles for the weekend (quick visit of both the area and a convention in the area). I booked this in May through KLM.

I had selected my combi of flights routing me directly to LAX on a combi 747 and back home via JFK on Delta to a KLM 777 back home.

Due to the first one being cancelled, I was rerouted through Paris. This part is about the A380 flight from Paris to Los Angeles.

Once in the terminal, I walked towards the first toilet I could find (oh stress…) and made my way to terminal 2E connections, when finding that my concerns were about to come true.

Lines. The end of the line for passport control. The end of it is not in sight for a loooong time and my flight would start boarding the minute I took this photo. Yikes 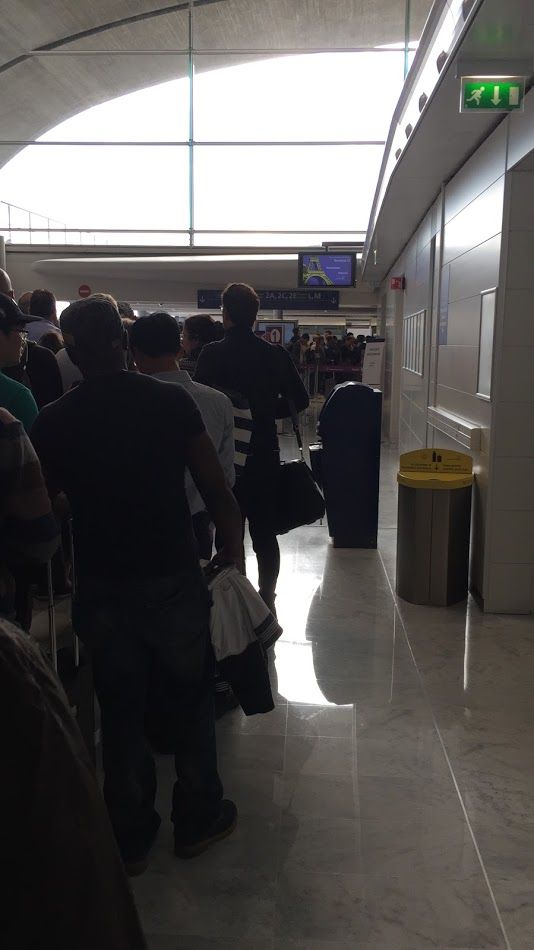 Instead of EU/Non EU passport, there apparently was a line for regular passengers, SkyPriority passengers (or other priority services which were as far as I know, not named), and the, by user Marathon explained, impopular automatic system PARAFE. I joined the main line but when stress kicked in, I tried using the PARAFE system, to which I apparently was not registered. When asking about my flight, I was rushed into the "less busy" priority lane. That took too long as well, so I got out again and got mad. I was rushed to the front of the line and was through in three minutes, ran to my flight, and barely made it. But boy, it was a close call. I should not have waited in that long line. And no fun either, simply because I at first did not ask for this connection (I wanted the earlier flight for this reason).

At the gate I scanned my BP at the automatic gates and rushed into the jetbridge when I realised I wasn't called for additional screening, seeing F-HPJC as I walked in. 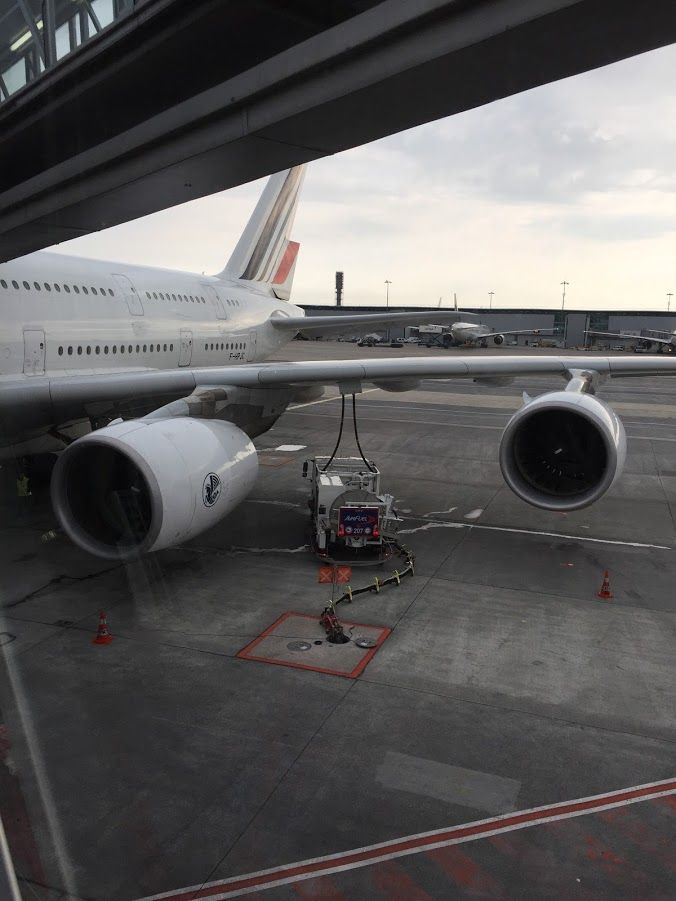 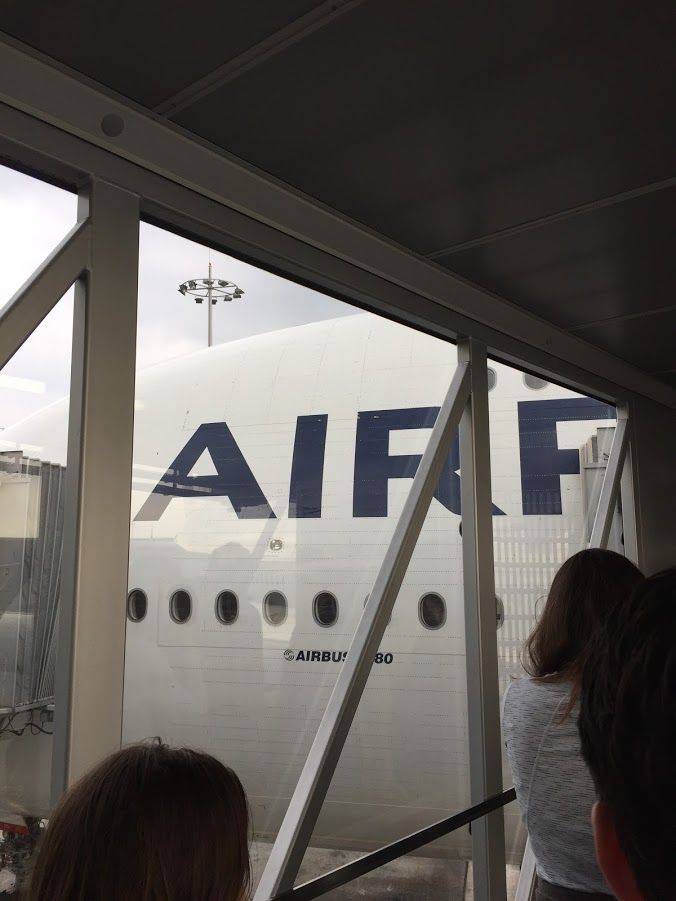 I have always enjoyed my flight on board A380's. This would become my third, after QF and EK. First AF flight as well. Once on the plane I found my seat, 37A, with my seat mate in 37C already. We had a short chat and made the arrangements for the empty seat in our middle. The seat mate would use the seat itself, I would utilise the floor. I am overall still around 6'3".

The amount of room on this A380 is simply amazing. I believe there must be someone who knows how much exactly, but between the seat and the wall there is this much room that when properly stowing your pillow and blanked, a nice table-like thing is made for your headset and menu. Nice. 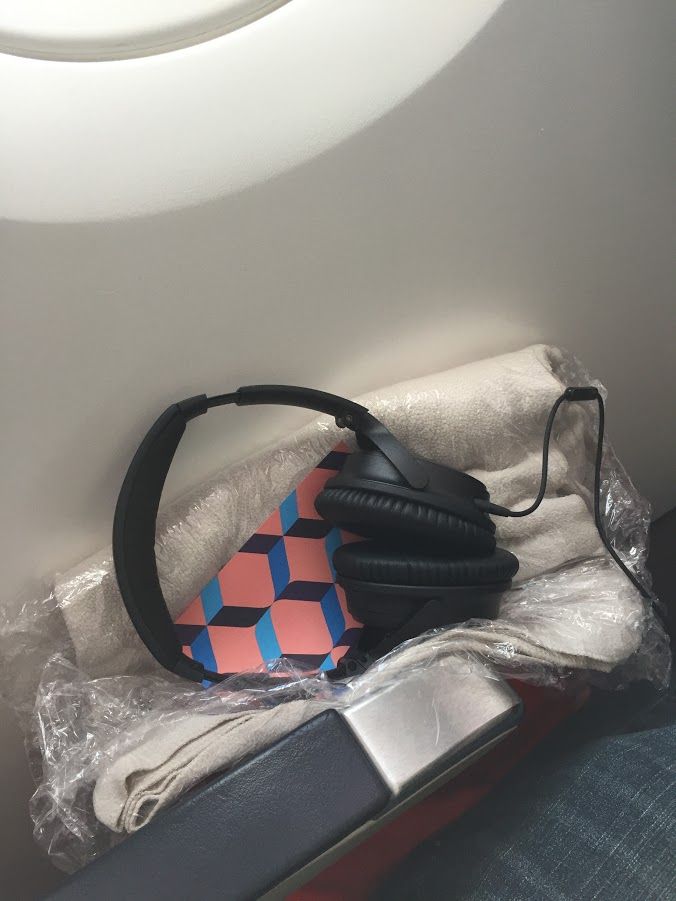 I mounted the gopro like action cam I had bought for 80 euro's on the window with the suction cup, fully charged and ready for action. We were pushed back on time-ish, announcements were made, including one interesting one about owners of the Note 7 which was not allowed to be charged or turned on while in the aircraft. Which makes sense, I believe, given the concerns.

View from my seat 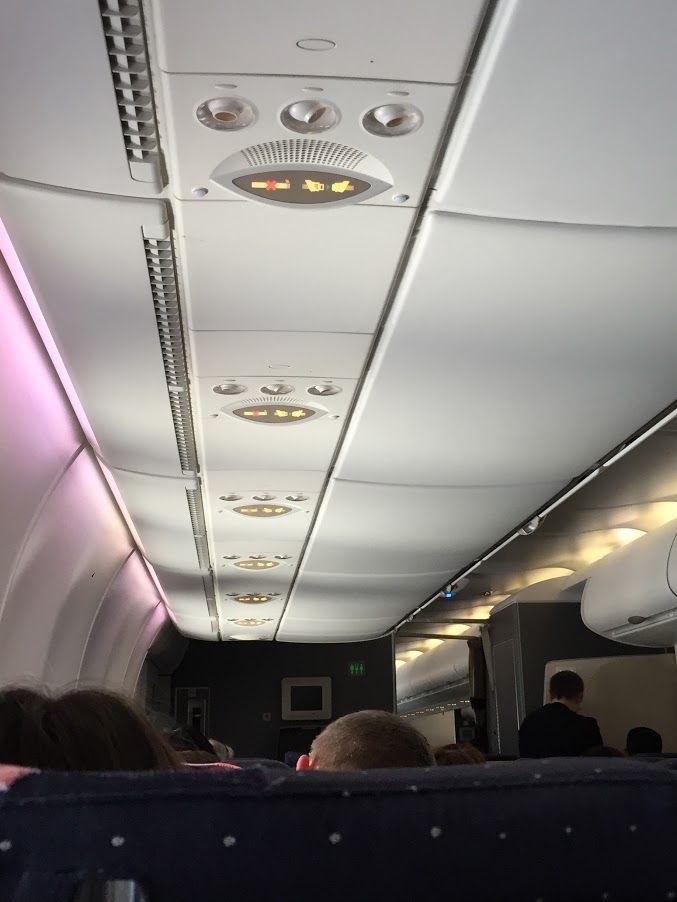 We took off from a for me unknown runway (it was eastbound though, probably 09R) and turned westbound (video here
, the message about the phone in French and English at 1:14). At around cruising altitude, an apéritif was served, of which I had the complete 'I do not care what you think, there's still 11 hours on this flight' pack, taking a champagne. I then, after getting up early, the stress at CDG, fell asleep. Bááád idea. I missed the meal service.

Champagne. No cares at all. Life is good. Champagne in Y. Kudos for AF. 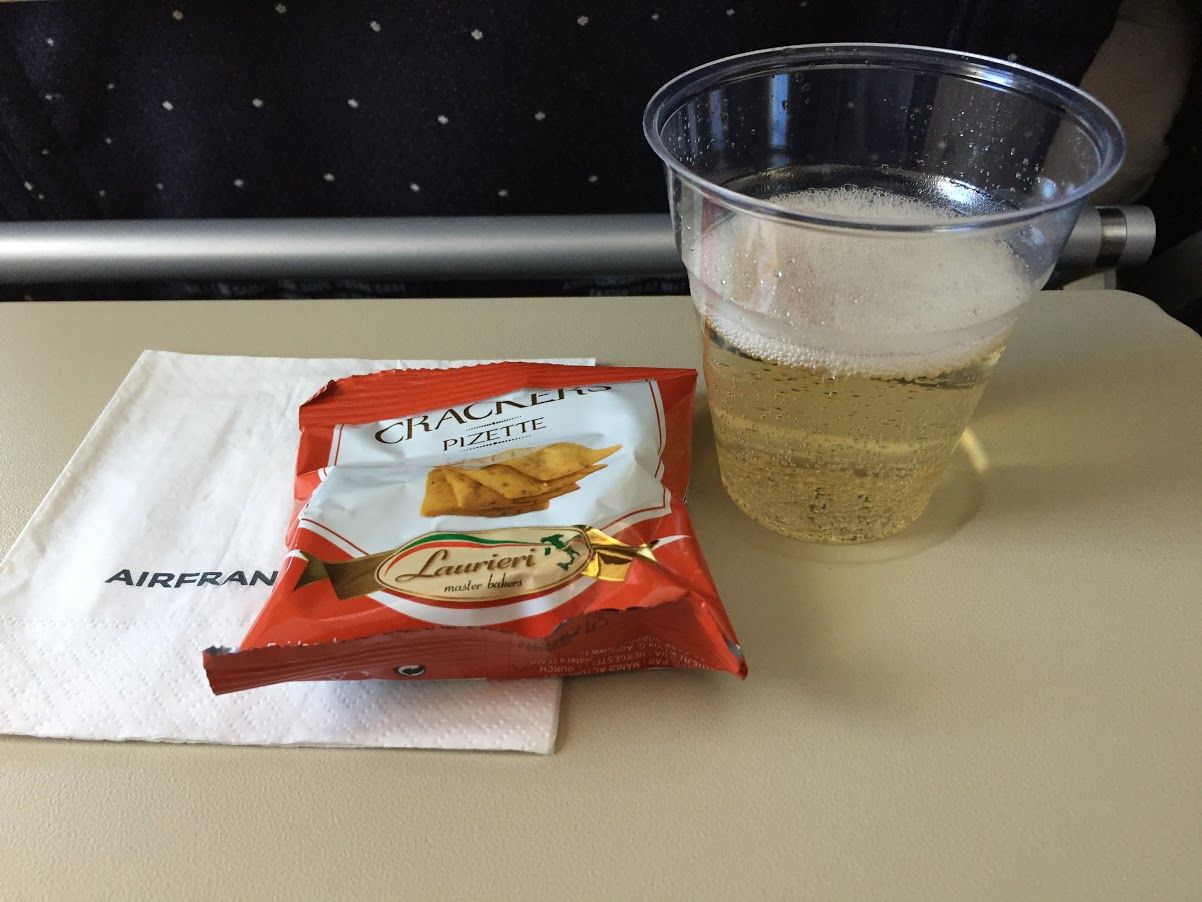 Waking up, I saw empty plates, and informed about my meal. I was given the only left option, the multi grain risotto. Judge yourself.

The appetiser was consumed already here. I am sorry. It was edible… 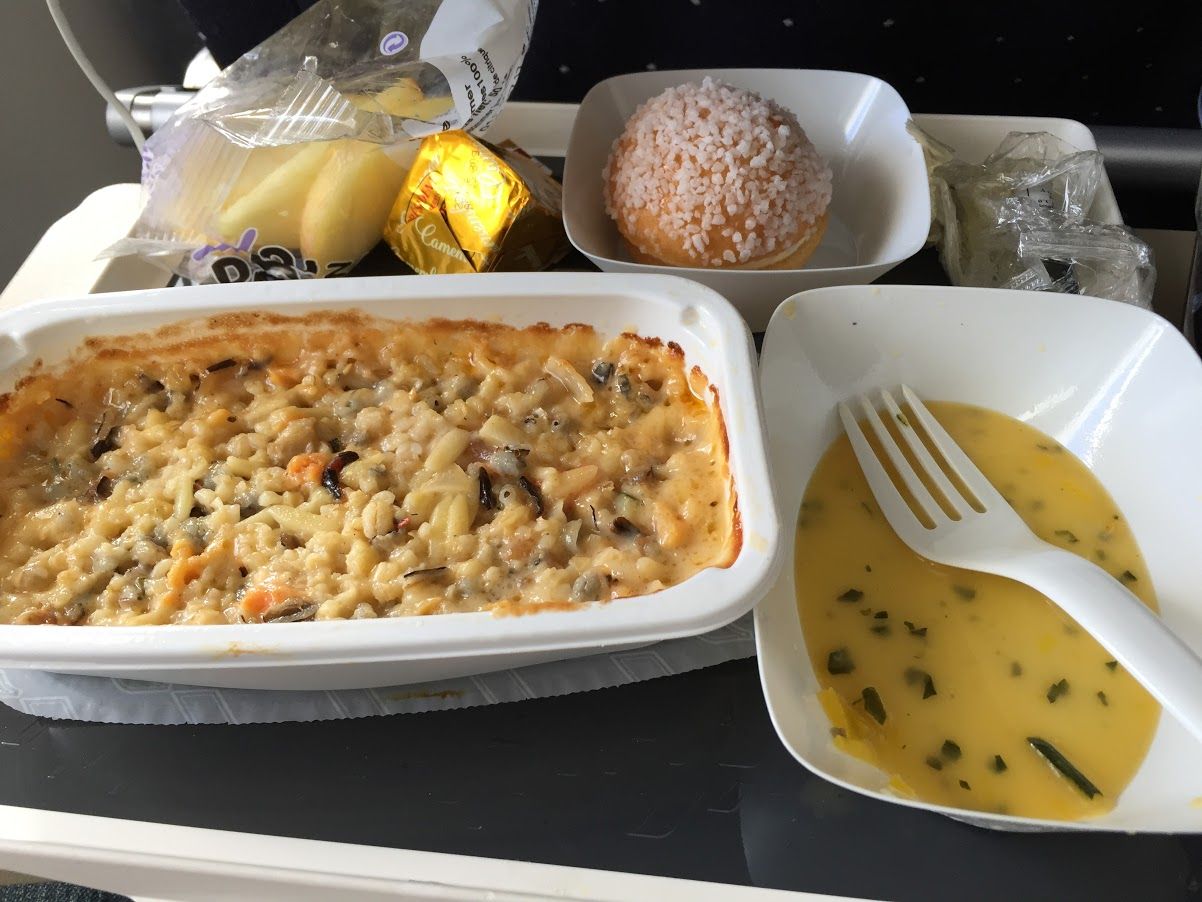 …the risotto wasn't. The dessert, while I do not know what it was exactly, was really good.

I started exploring the entertainment. Overall impressions weren't good, but better than KL's 747. The system wasn't really responsive, choices were acceptable. The on board camera's were a huge plus, even though the nose and down camera weren't working. The tail cam is what's important to me. Amazing feature.
Picture taken on arrival at LAX terminal B. 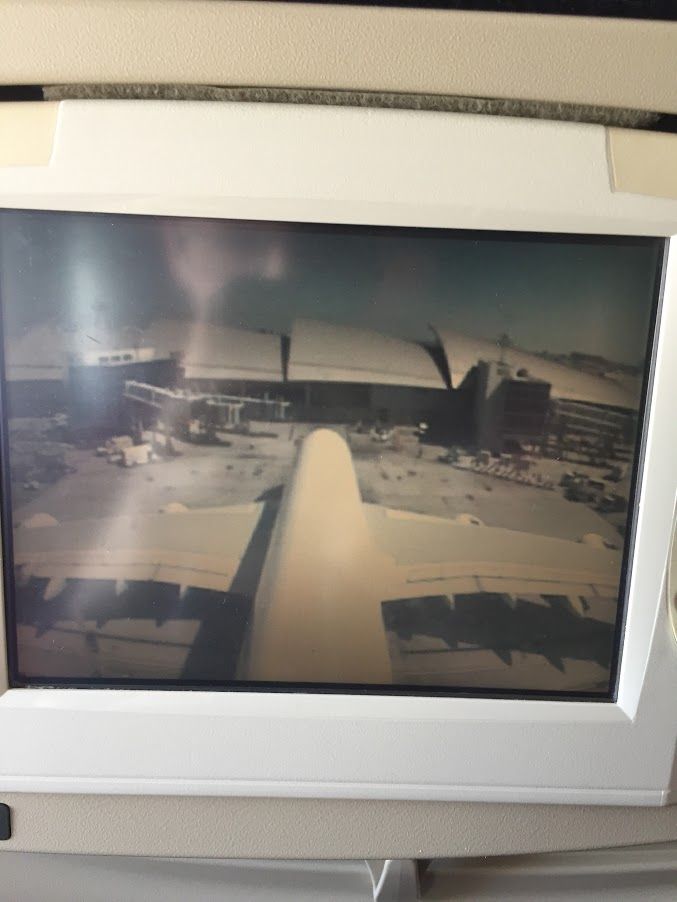 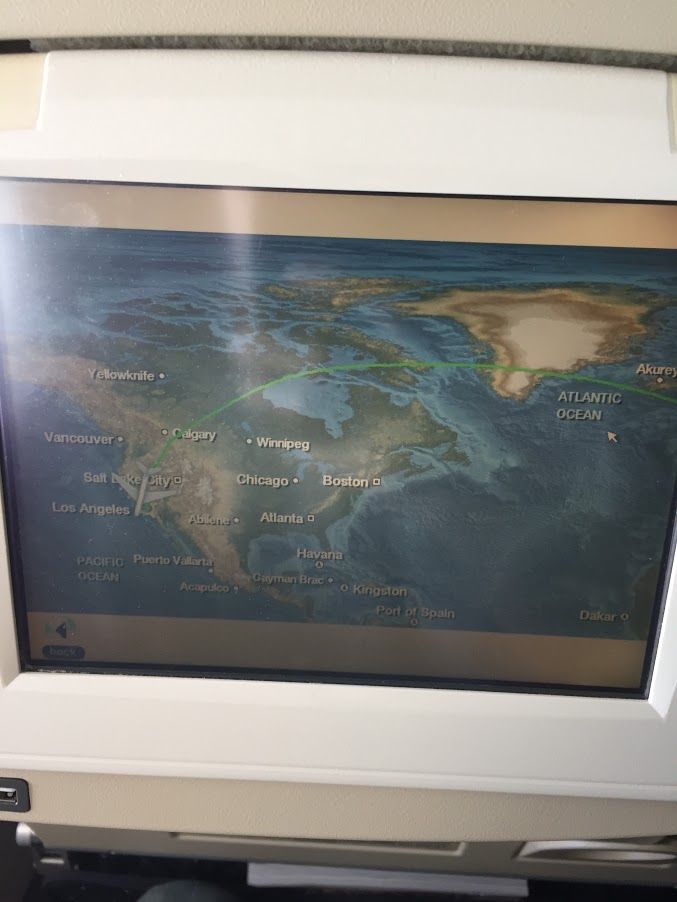 I watched some movies, starting with 'The Nice Guys', followed by 'Daddy's Home', before dozing off and waking up, hungry, tired, and réally not in the mood for food. When the cabin started filling with damps again.

The 'warm snack' was distributed, a 'tarte de fromage' and again, the appetiser was nice, as was the dessert… 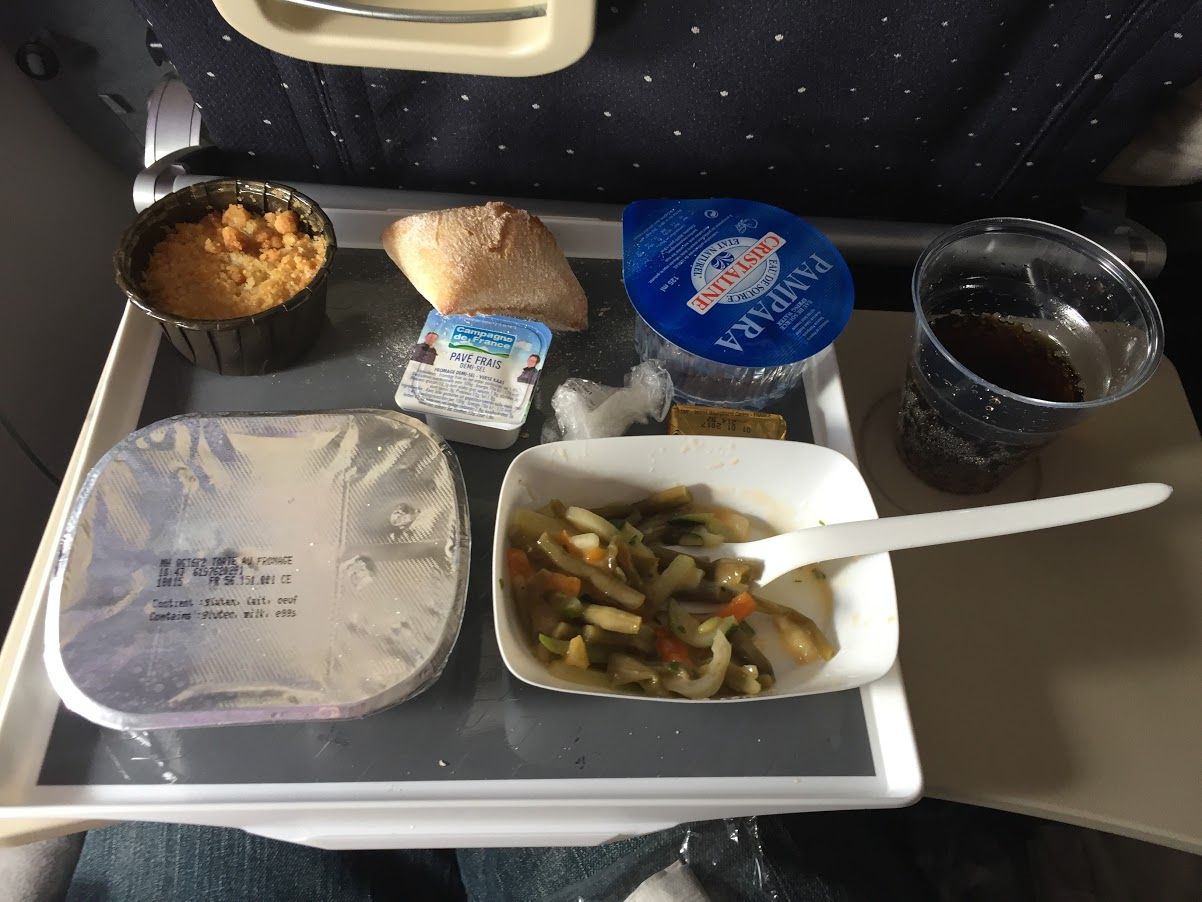 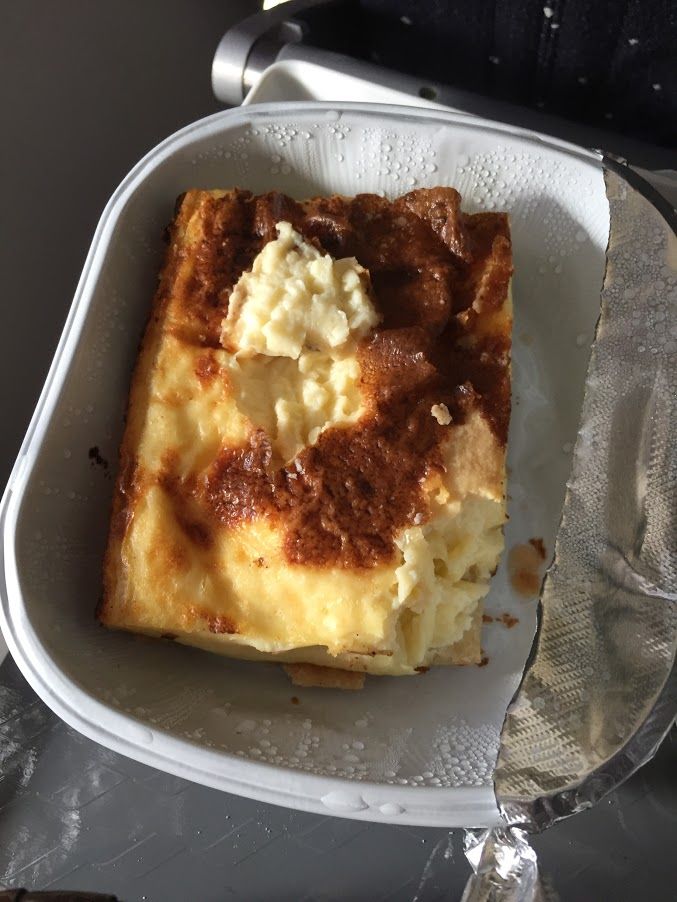 ..inedible. I had one bite before putting the foil back. Nasty, nasty, nasty.

The rest of the flight was uneventful, with me sleeping, enjoying the view of the window blinds in the dark cabin. I explored the cabin as well, finding the stairs with the closed gate at the top, but still, cool.
Stairway to heaven… or not, as there is another small section of Y class up there. 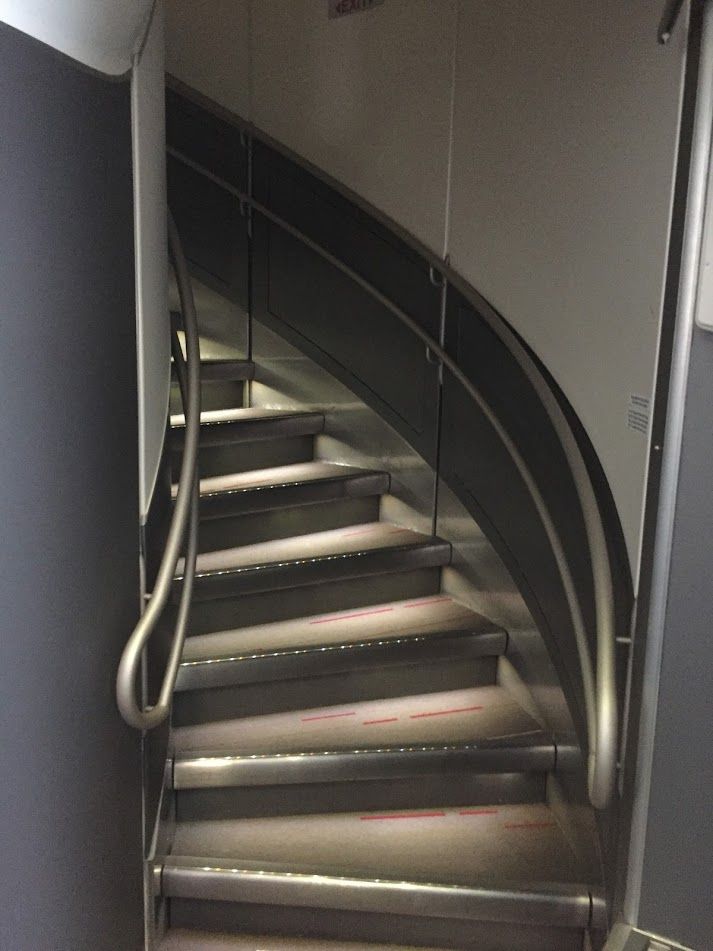 The stairs were blocked off unfortunately. 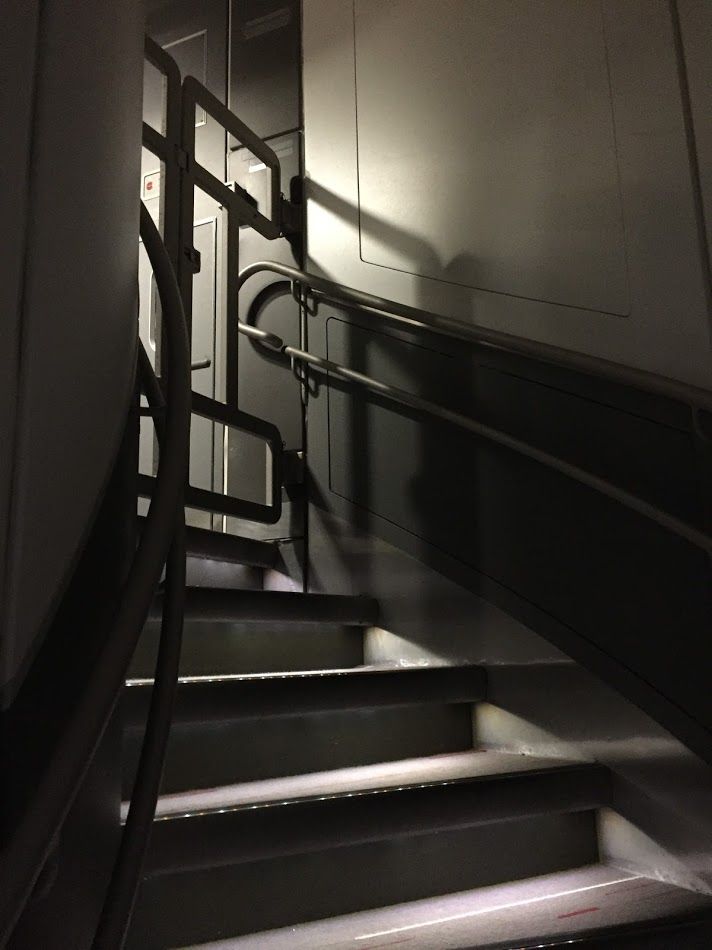 I also visited the lavatory, which was clean. 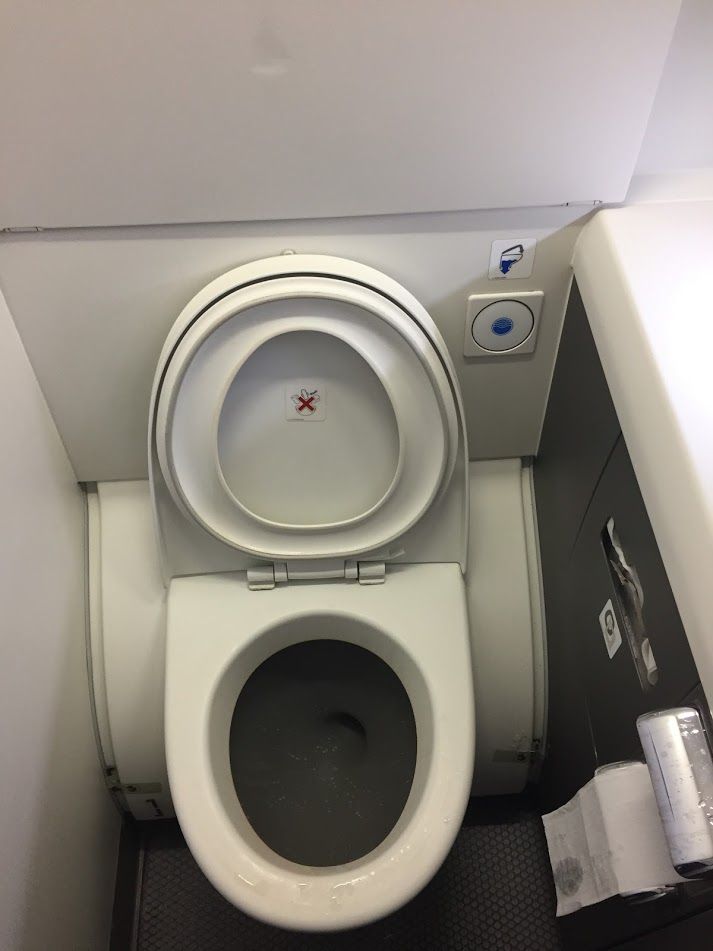 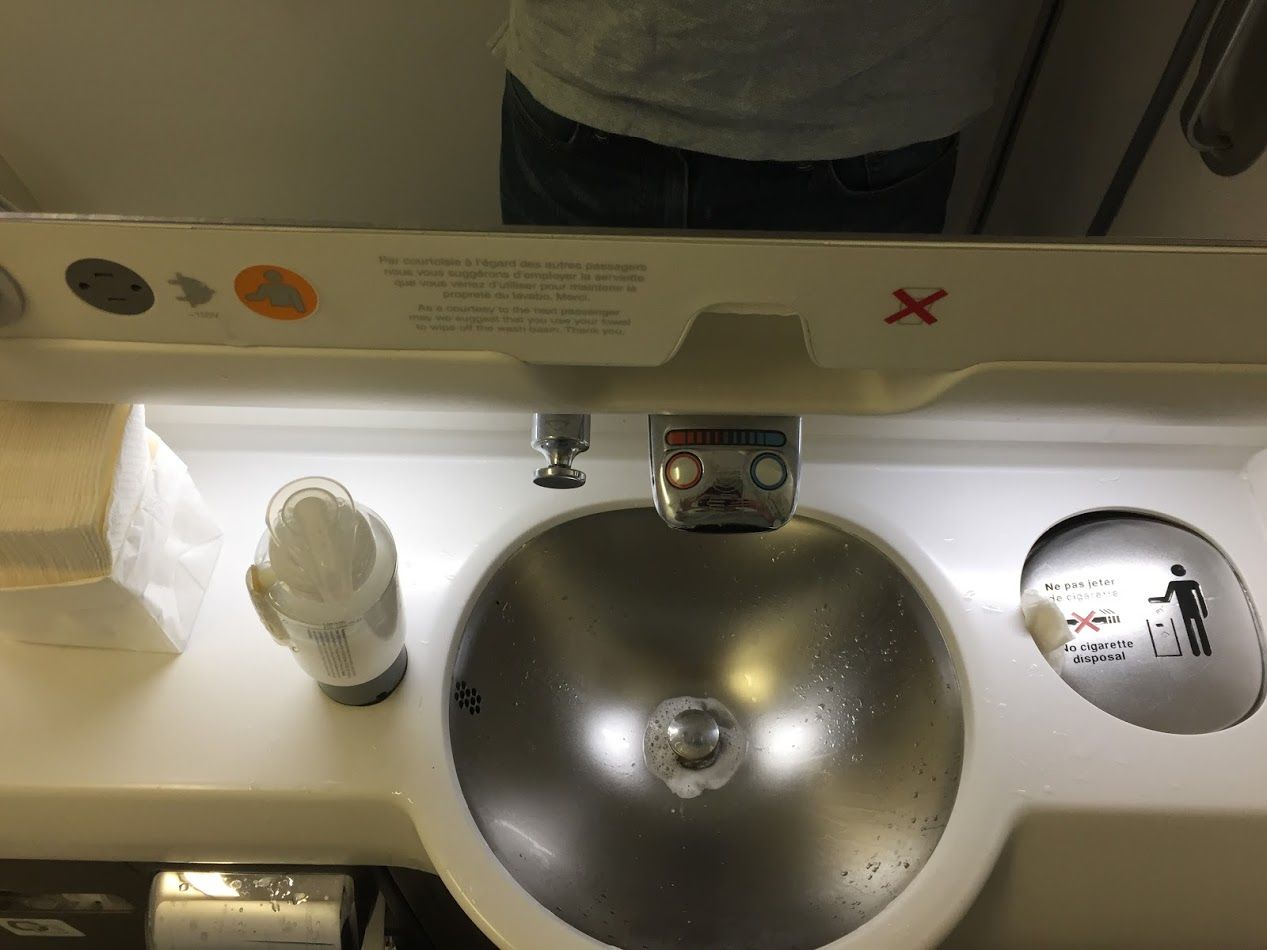 Overall, the cabin itself was quite clean as well.

My seat mate asked at this point if I had a pen for the CBP Declarations Form. I gave him a pen and asked him where he got it because I knew I needed one but hadn't got one. He replied they were handing it out at the airport. D'oh, that's where I walked past. Stupid mistake. I asked a member of staff who happily went on a search and came back with a huge pile of forms and I filled it in.

When I was done filling in the form, the purser came over the PA telling us there was a passenger who had become quite sick and needed medical assistance. I was hoping it wasn't serious enough we'd need to divert to the at that point most logical airport, San Francisco. Luckily it wasn't that serious but still attention was needed and we continued to Los Angeles, where descent started merely half an hour later. We were treated to best of views of California and Los Angeles which I am not afraid to share (and will also be in the landing video if you're interested).

At this point, the mood lighting turned red. 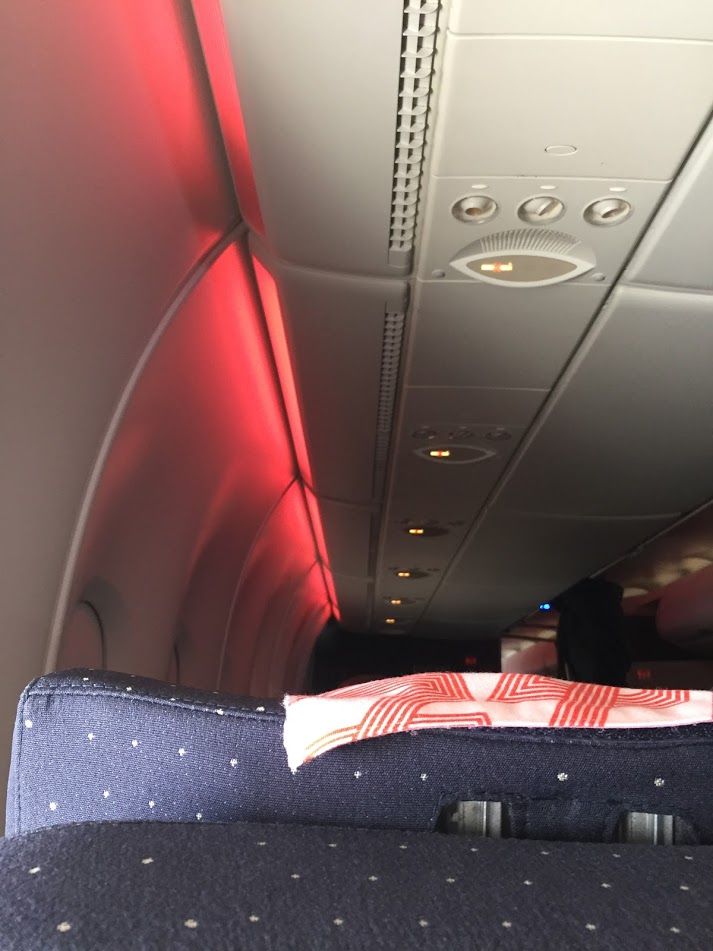 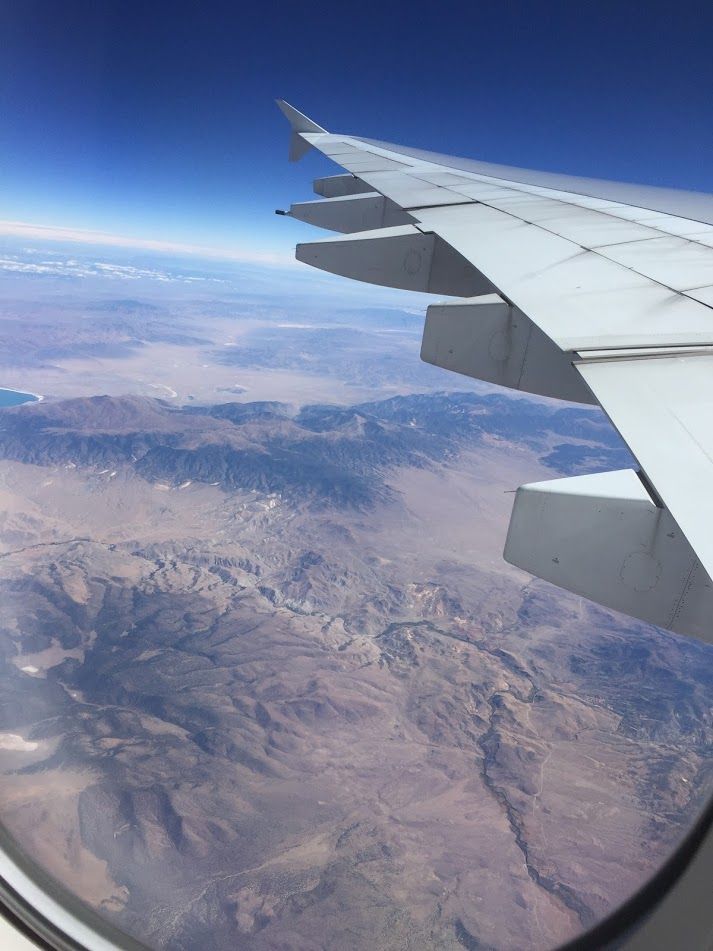 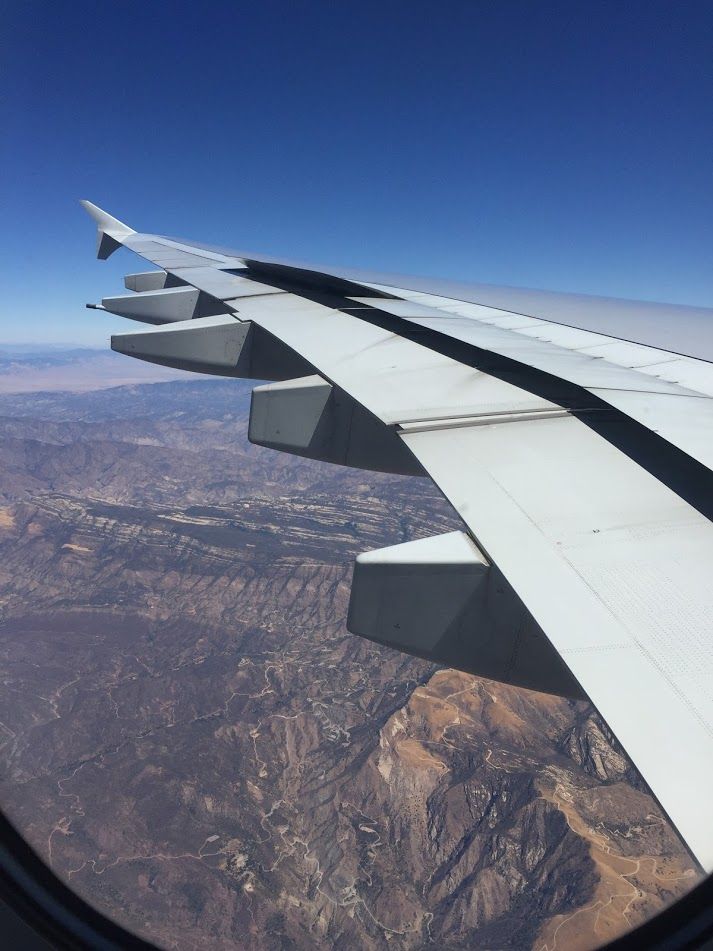 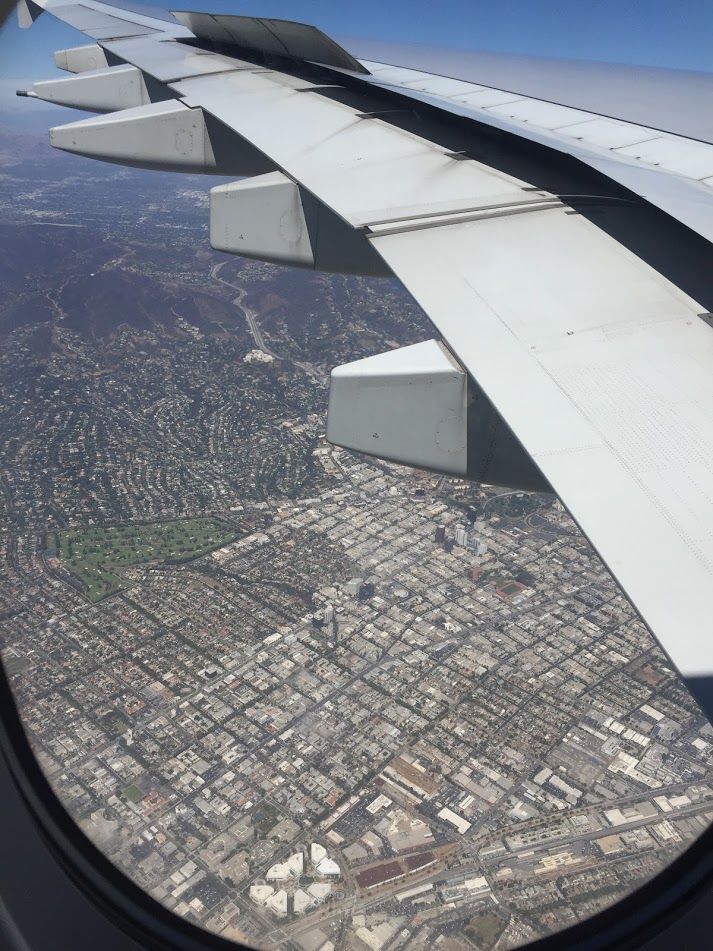 The views on the tail cam were quite limited as the sun was shining on my screen.

We treated folks at In n Out with a nice view and landed on 24R. The landing was undescribably hard. I feel that soft landings are quite rare on an A380, but this was insane in my opinion. Video can be found here.

Upon arrival we were advised to stay seated as there were paramedics that needed to join us for the ill passenger who apparently was on the upper deck as the main deck was cleared quite fast. I grabbed my belongings and exited the aircraft, bidding farewell to the crew in my best French "au revoir" and walked to CBP, which was smooth. I then collected my white Nissan Versa rental car at the Hertz lot and went to enjoy the weekend.

Thanks for reading and stay tuned for the next parts!
See more

First AF impressions were not great. Crew was nice and professional, the cabin was clean, the seat was comfortable in my opinion but the entertainment is not up to modern standard and I was simply impressed that it was a touchscreen. The catering was not good.

CDG airport was a hell to be quite short, while LAX was, up to my very pleaseant surprise, smooth.

The contributors of Flight-Report published 77 reviews of 4 airlines on the route Paris (CDG) → Los Angeles (LAX).

The average flight time is 11 hours and 43 minutes.

He wrote 8 reviews about 4 airlines and 7 airports.