#37 out of 78 Airlines A minimum of 10 flight-reports within the past two years is required to appear in the rankings. 643 reviews

By TBloemink 1760
Published on 11th October 2016
Hi folks. Just a quick intro telling you that the pictures in this report were not made with a professional camera and some of them are not horizontal. This is because of the time I took making them. I make them for a memory instead of making a report and some of them were saved for sending to others on my phone. These are unedited and I am using them to tell you about my experience. I hope you don't mind.

Initially I had booked KLM to Los Angeles for the weekend (quick visit of both the area and a convention in the area). I booked this in May through KLM.

I had selected my combi of flights routing me directly to LAX on a combi 747 and back home via JFK on Delta to a KLM 777 back home.

Due to the first one being cancelled, I was rerouted through Paris.

I left my hotel at about 6.15 AM which after all was too early. Traffic was congested as usual I was told and I had my TomTom guide me back to Hertz to drop off the car. Took me around 2 hours to get to the airport as I was on the bus at 8.15 AM. My flight would depart from T5 and I joined the queue for bag drop after I had re-printed my boarding passes (for the collection).

Took me 10 minutes to find out I was in the skypriority lane, which I left and kept looking for the normal queue (which after all, to my surprise, went quicker).

Not in the mood to explore landside T5 (which was boring), I went through security. I was told to use the Skypriority lane and TSA was smooth, like last time in Houston. Surprisingly as well.

At checkin my gate was not known yet but soon enough I found out that this would be 52A. 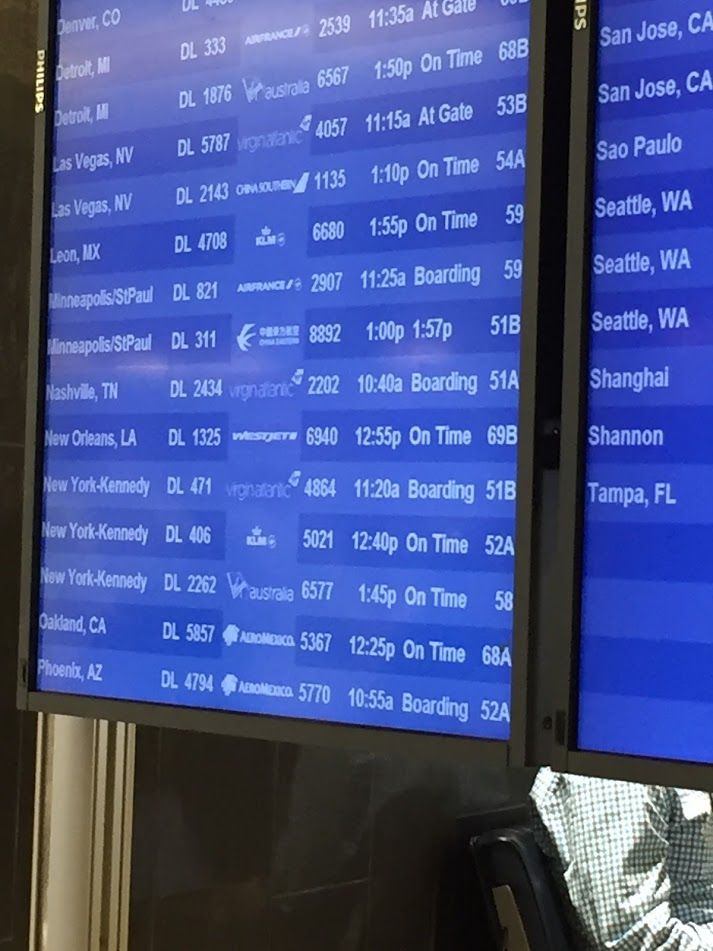 I bought something to eat and took a seat near 52A (at that point I did NOT know that the flight would depart from here. Plain luck after all). 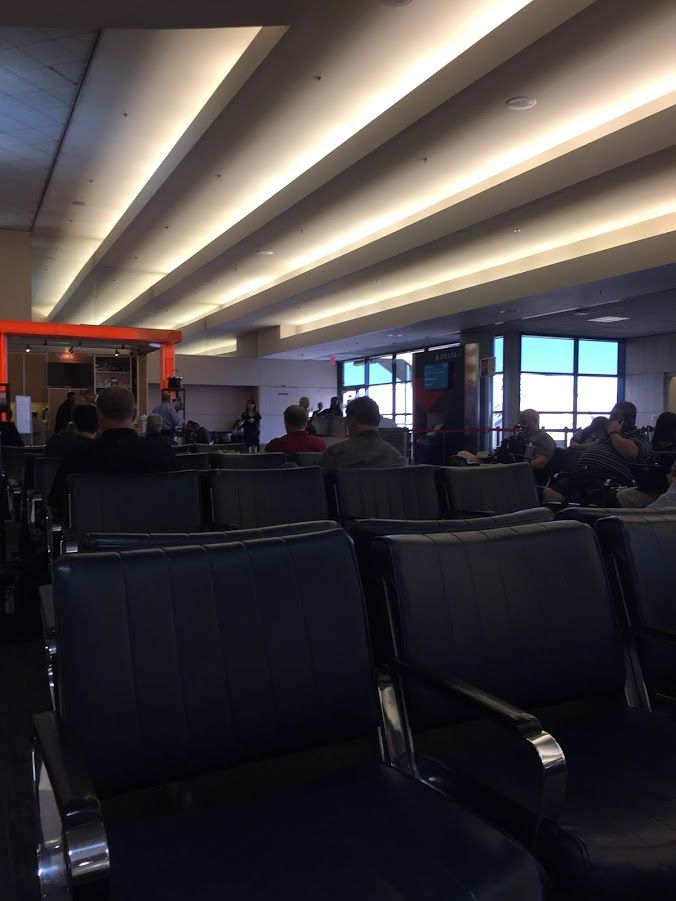 When finished eating I explored the airport. As I have a connection in LAX in February (AMS-SFO, LAS-LAX-AMS), I went to look for the T5-T4-TBIT connector, which was found quickly. Takes about 10-15 minutes for me to transfer from T5 to Tom Bradley which is totally fine. I had some coffee in terminal B and returned to my, still empty, seat, and waited for my plane to arrive, which was inbound from New York as per flightradar24. 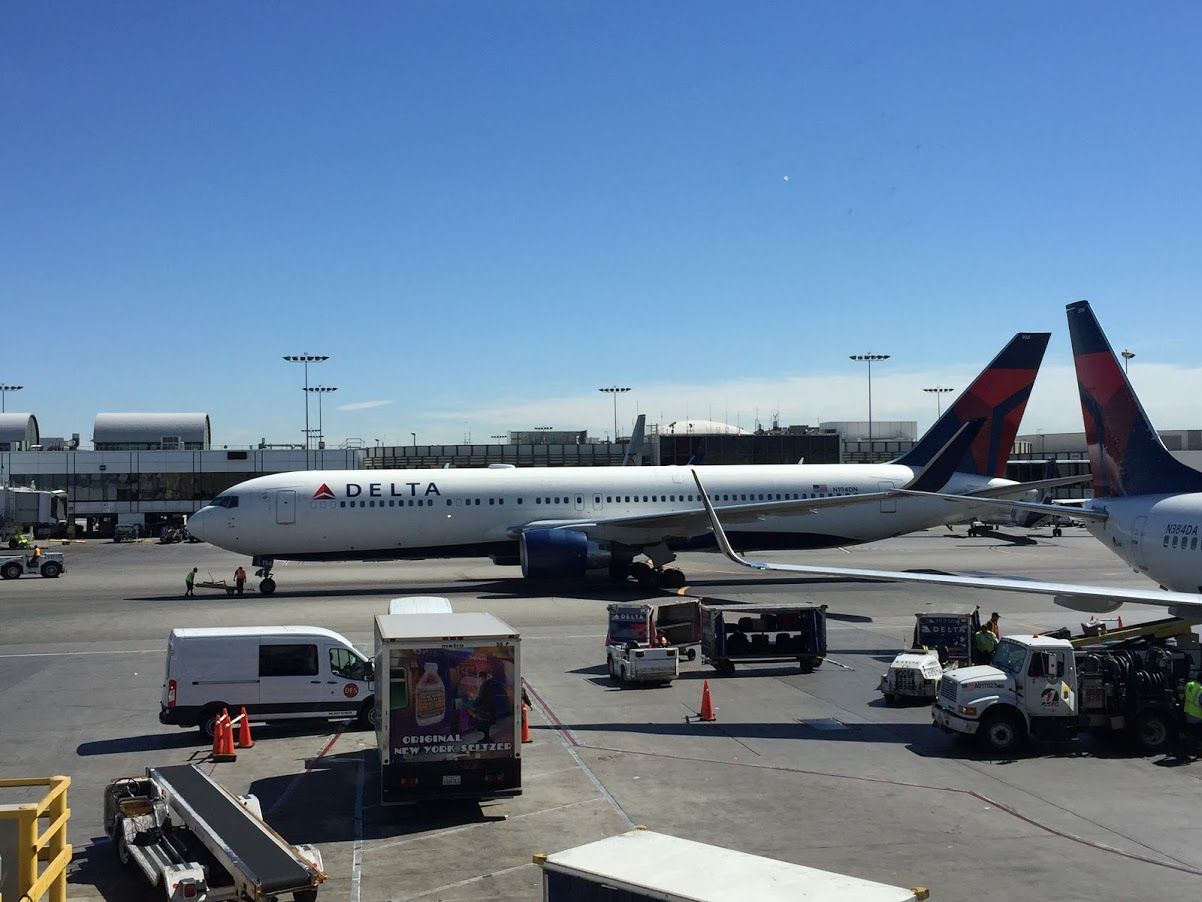 This was the best shot I could make from the pier. 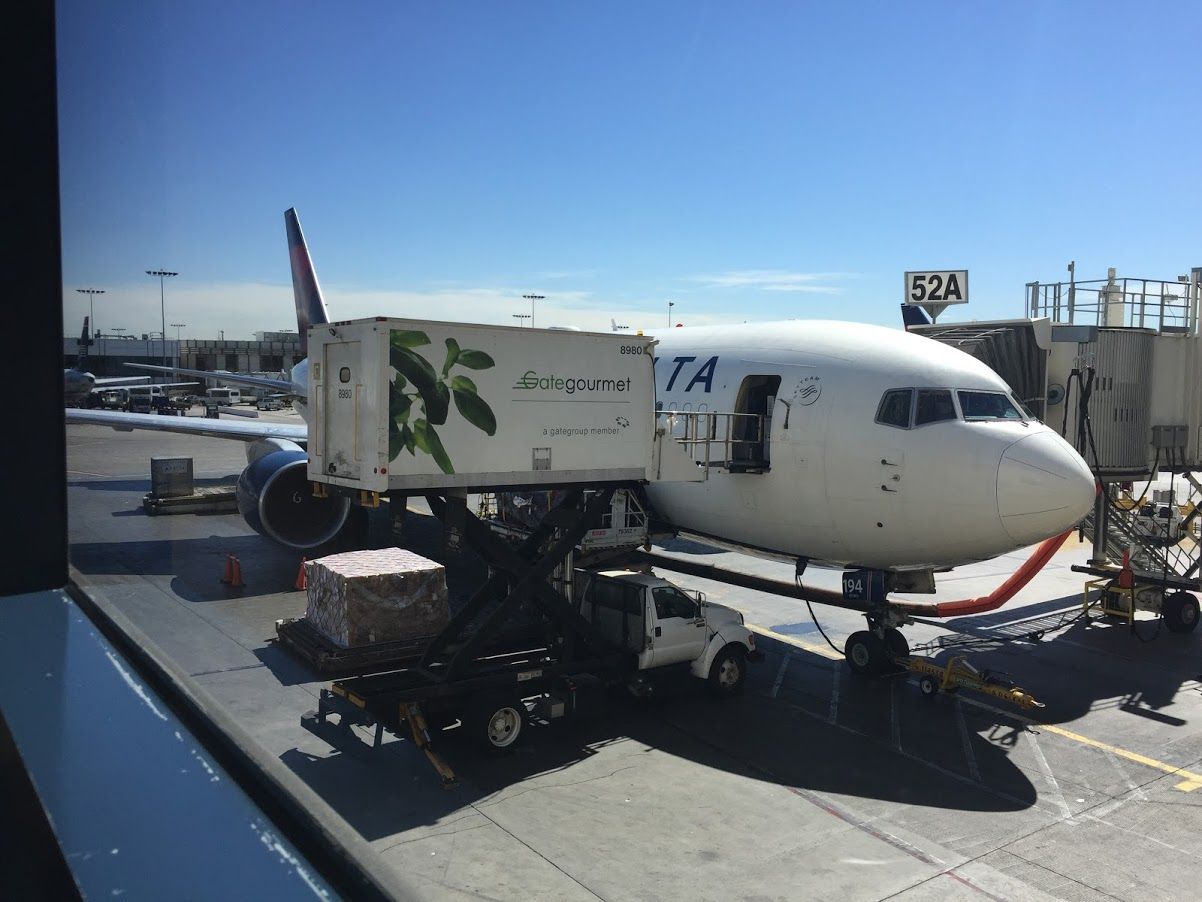 Boarding was announced on time and I was in zone 3.

This domestic leg of this flight LAX-JFK was the first part of DL406. After New York, it would continue to Shannon, Ireland. A lot of passengers were bound for New York.

I found my seat, 33A, and settled in. Soon enough I found out that the aisle seat would yet again, just as KL1229, be empty. This meant I would have direct aisle access AND space for my bag, which is amazing.

View from my seat 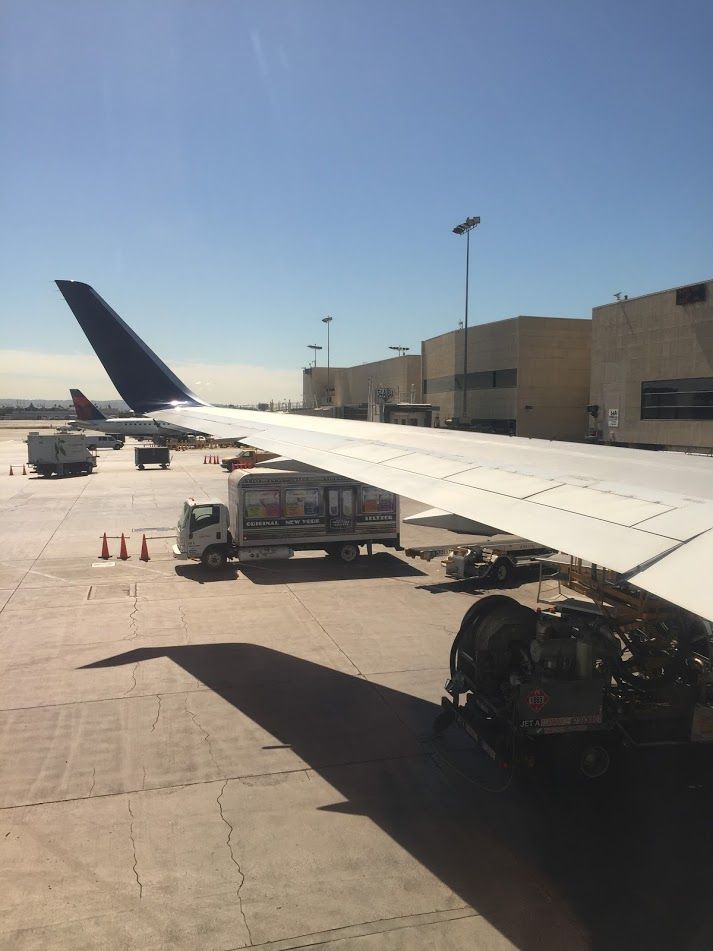 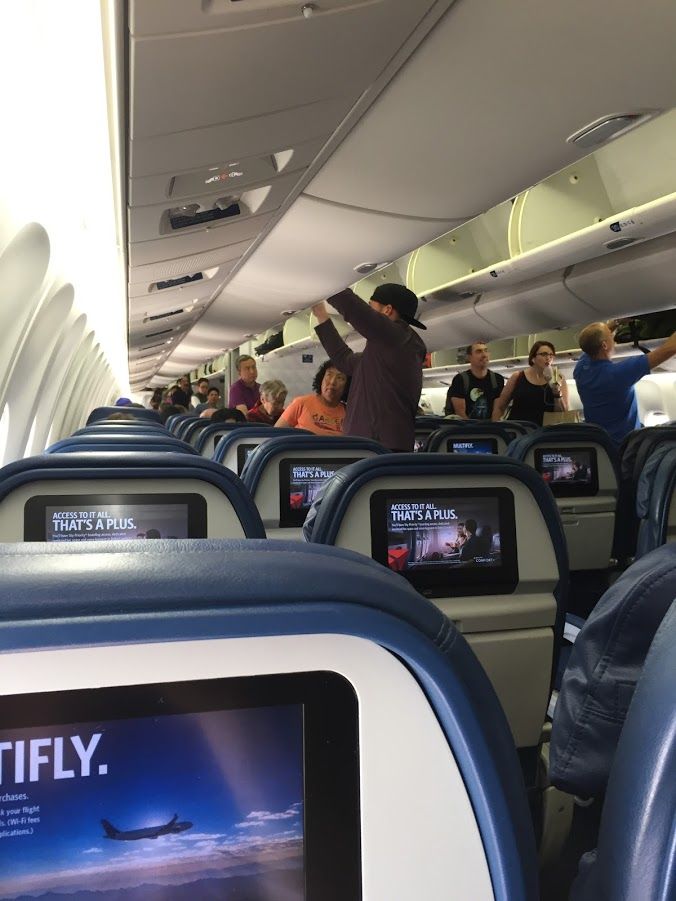 Nice 9 inch screen. Along with the window my companion for this flight. 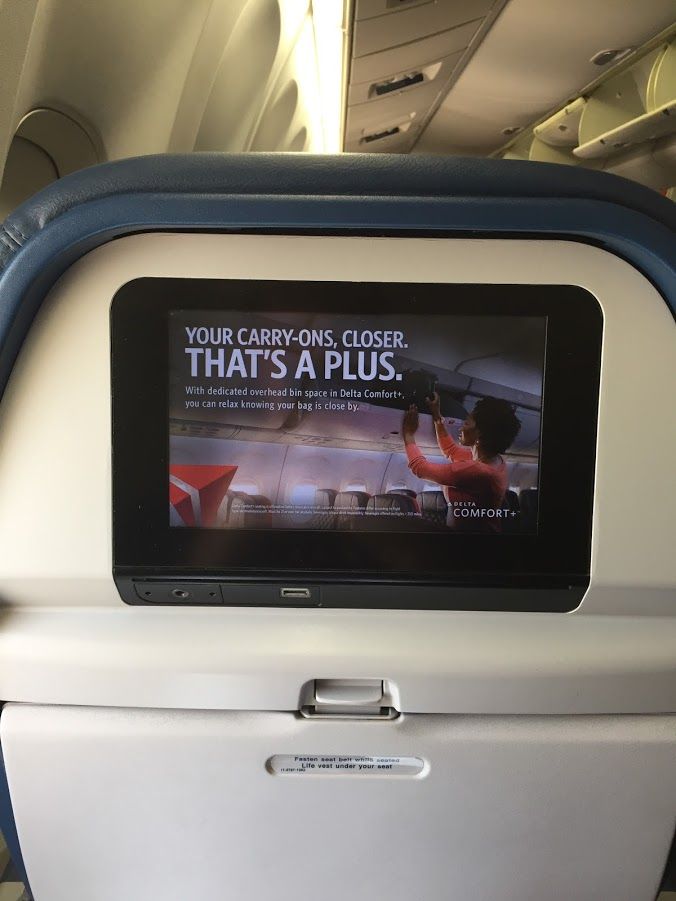 I mounted my camera again to record the takeoff. 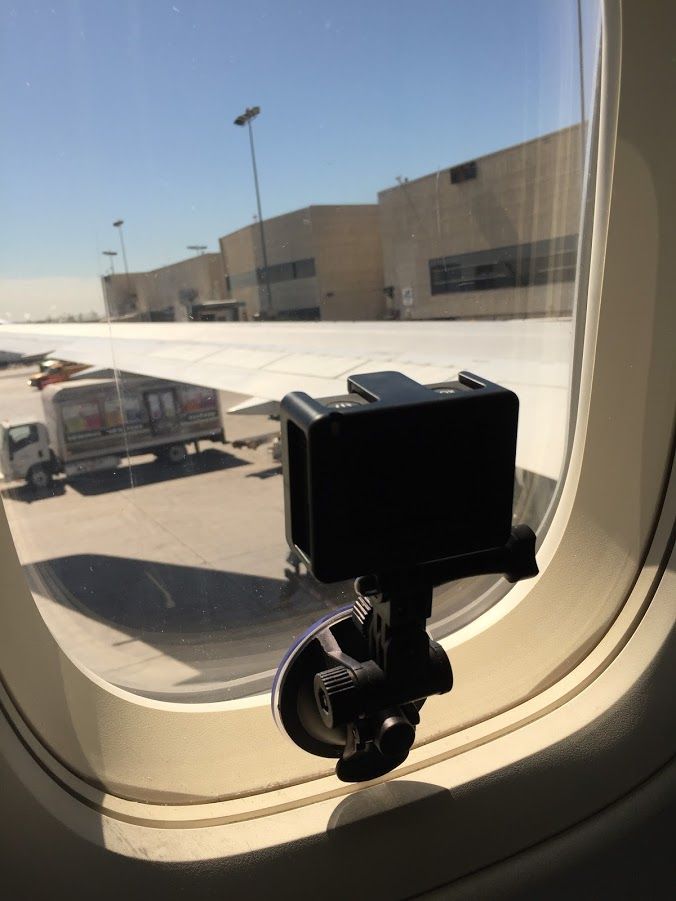 We pushed back on time and the engines started while the safety video was played. Thereafter another announcement was made that passengers posessing a Galaxy Note 7 should turn it off. This is all documented in the takeoff video which you can find here.

We took off in westerly direction and made a left turn. 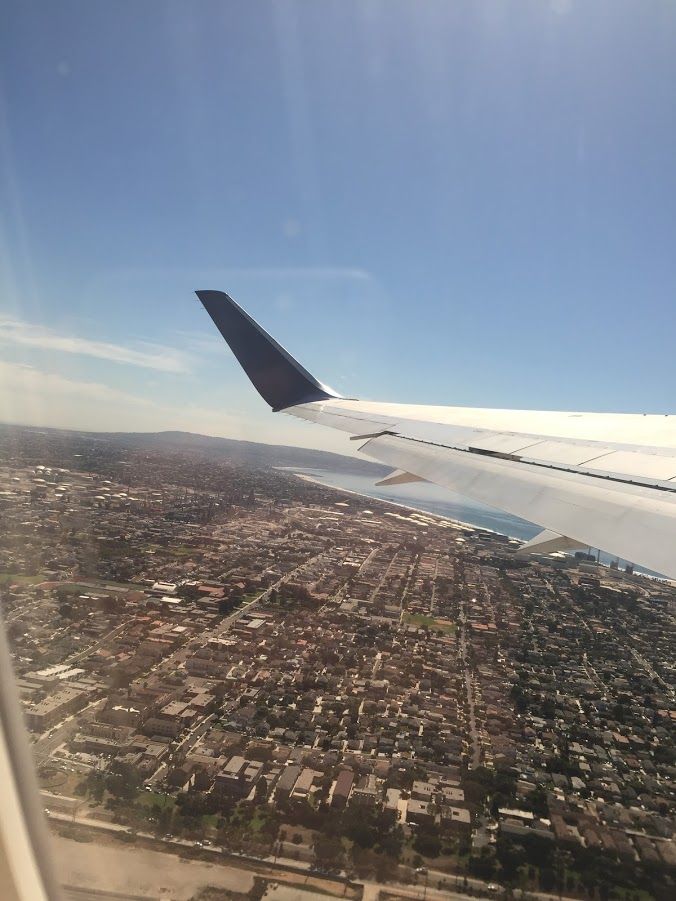 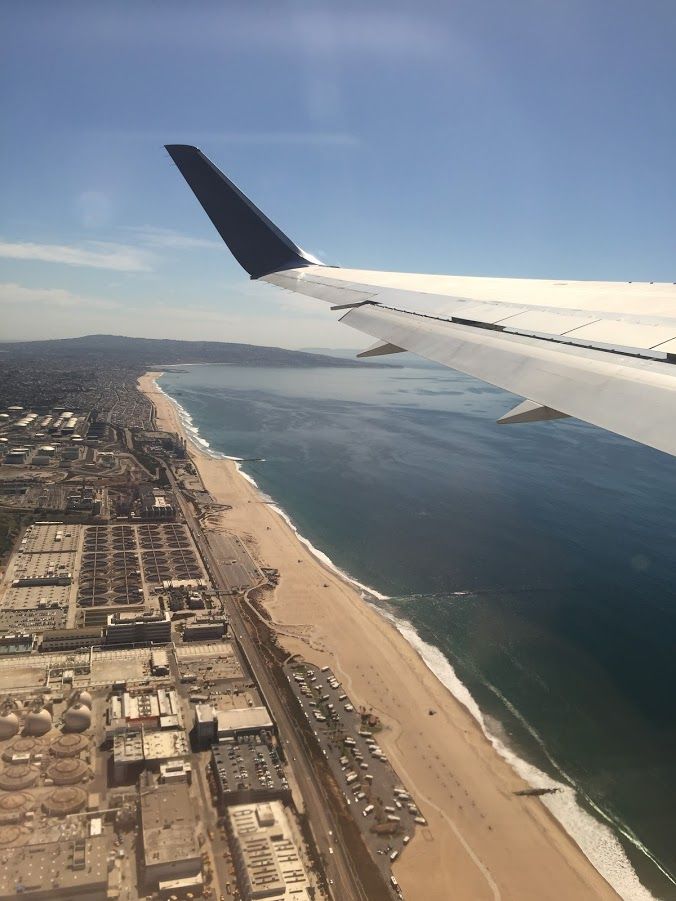 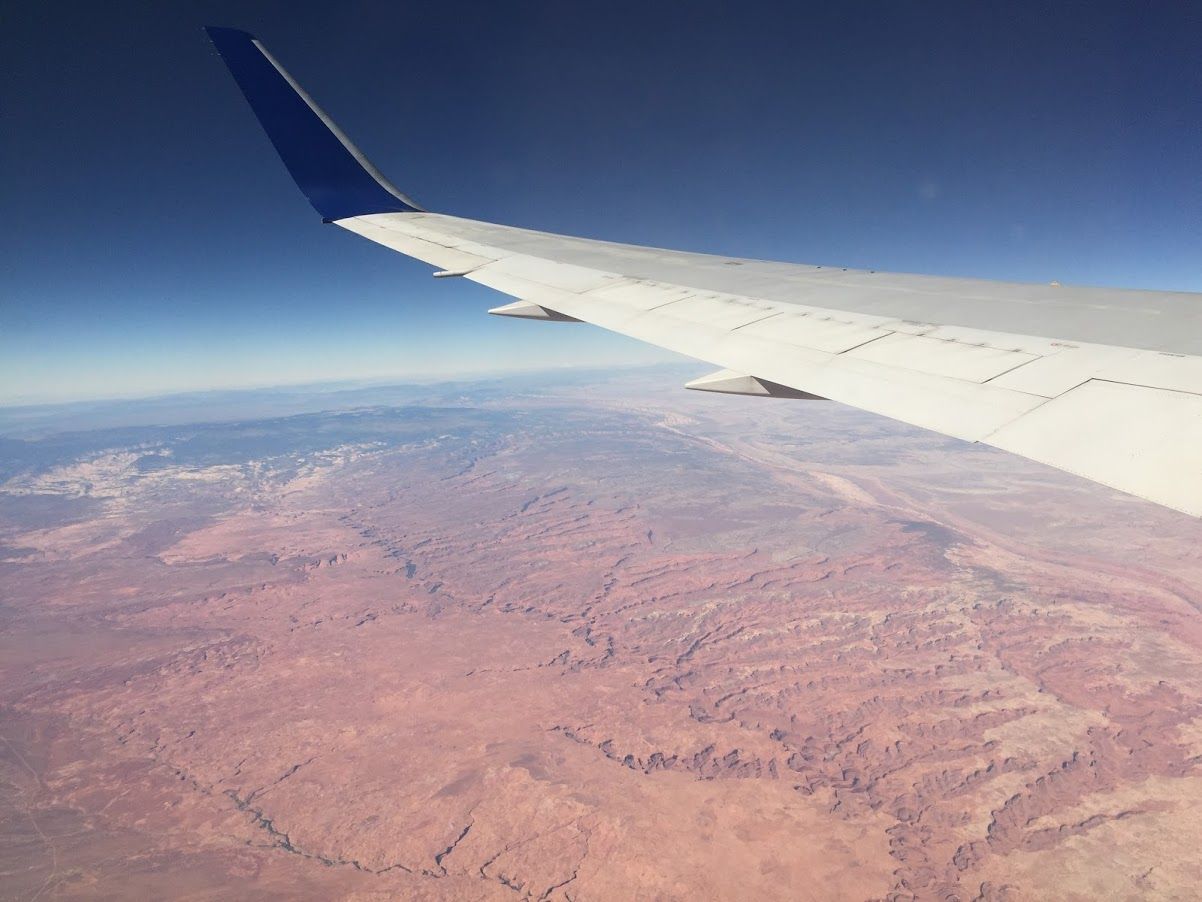 Service began with me taking a coke and some salted pretzel bites and eventually I bought a crunch box for 7 dollars which is a rip-off but oh well, I did not have any food with me…. 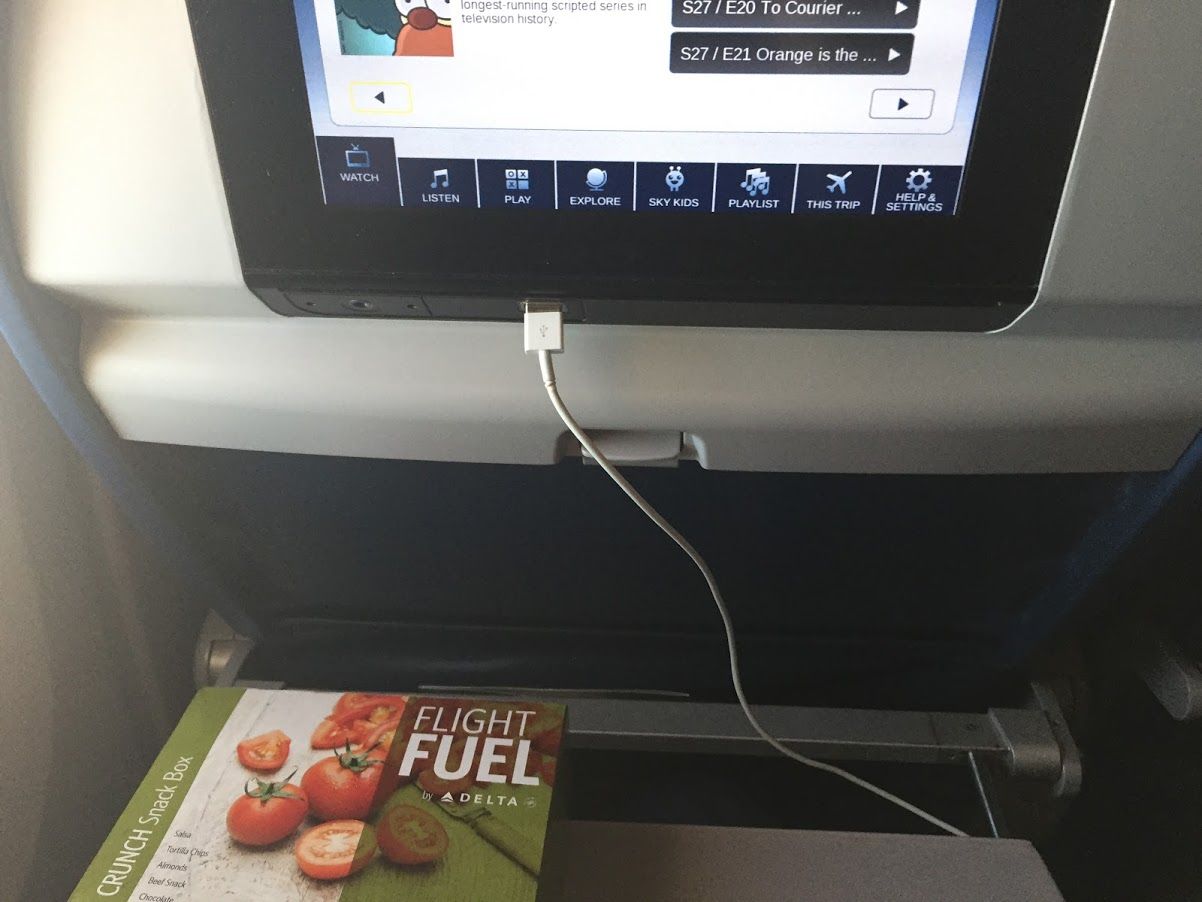 I enjoyed the scenery in the mean time. 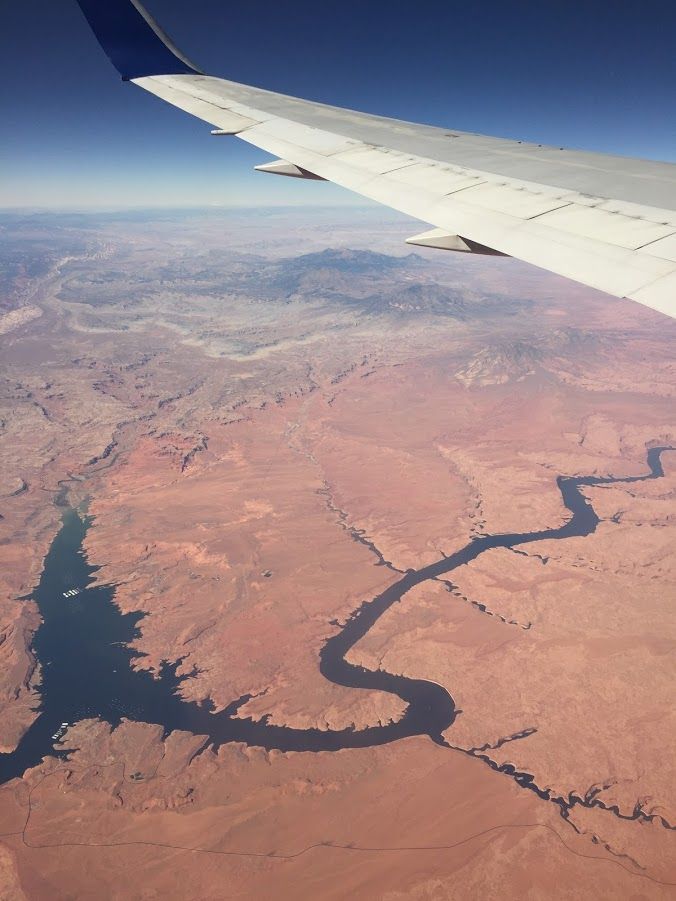 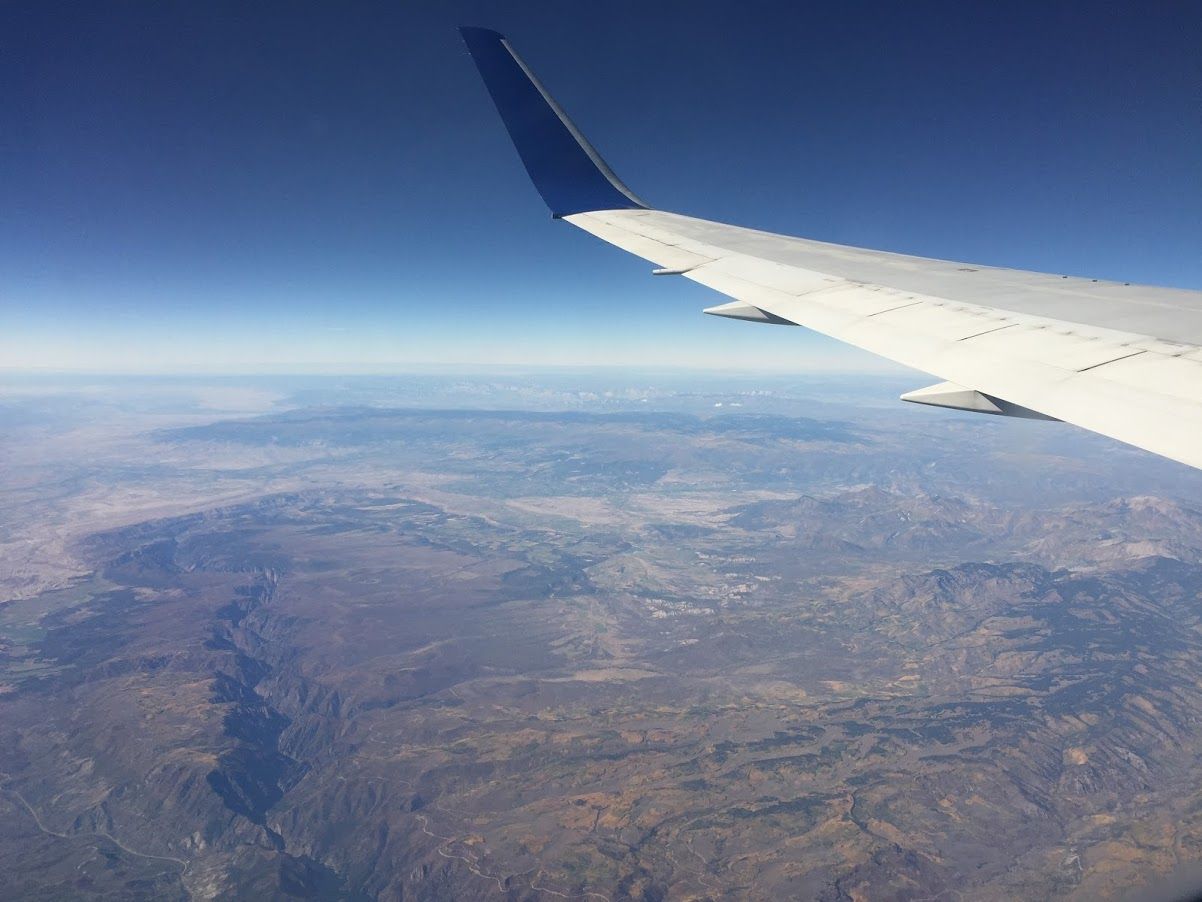 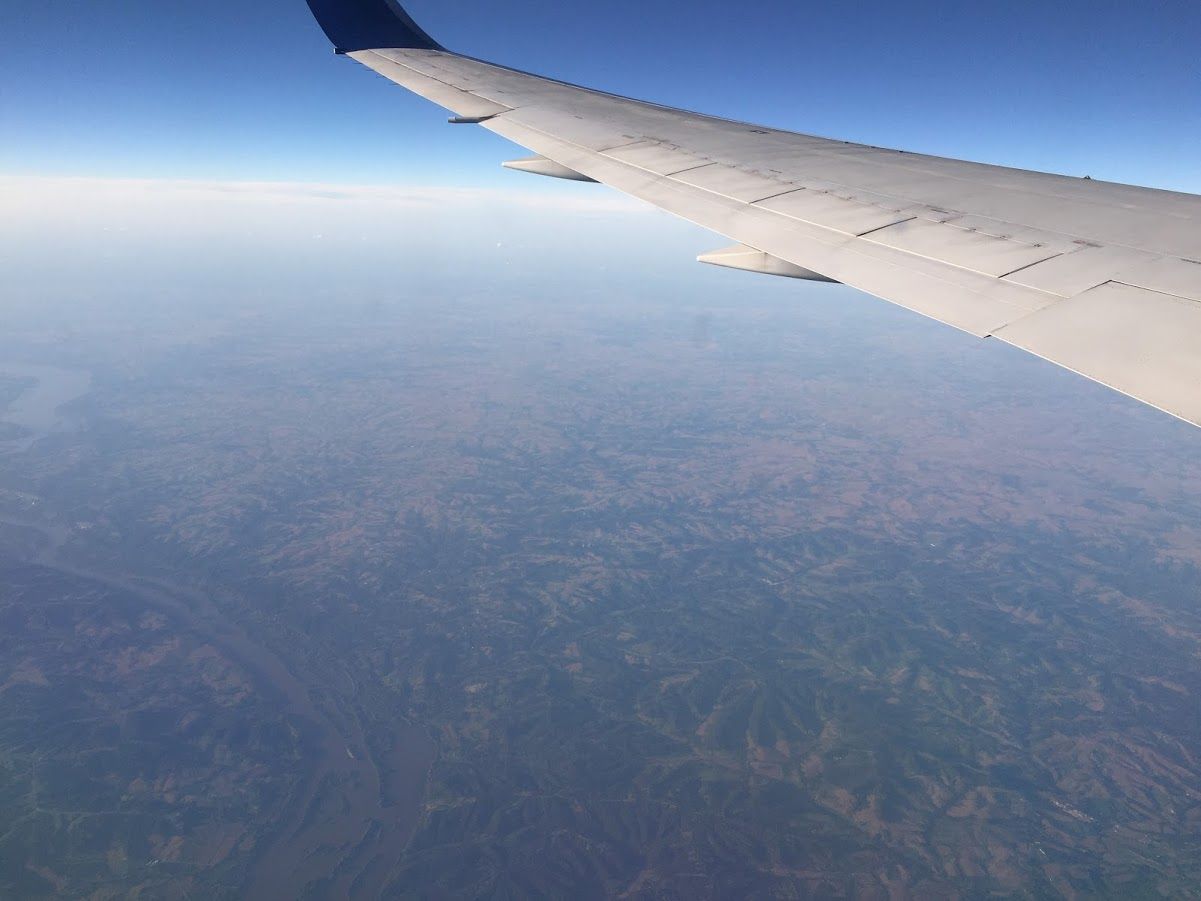 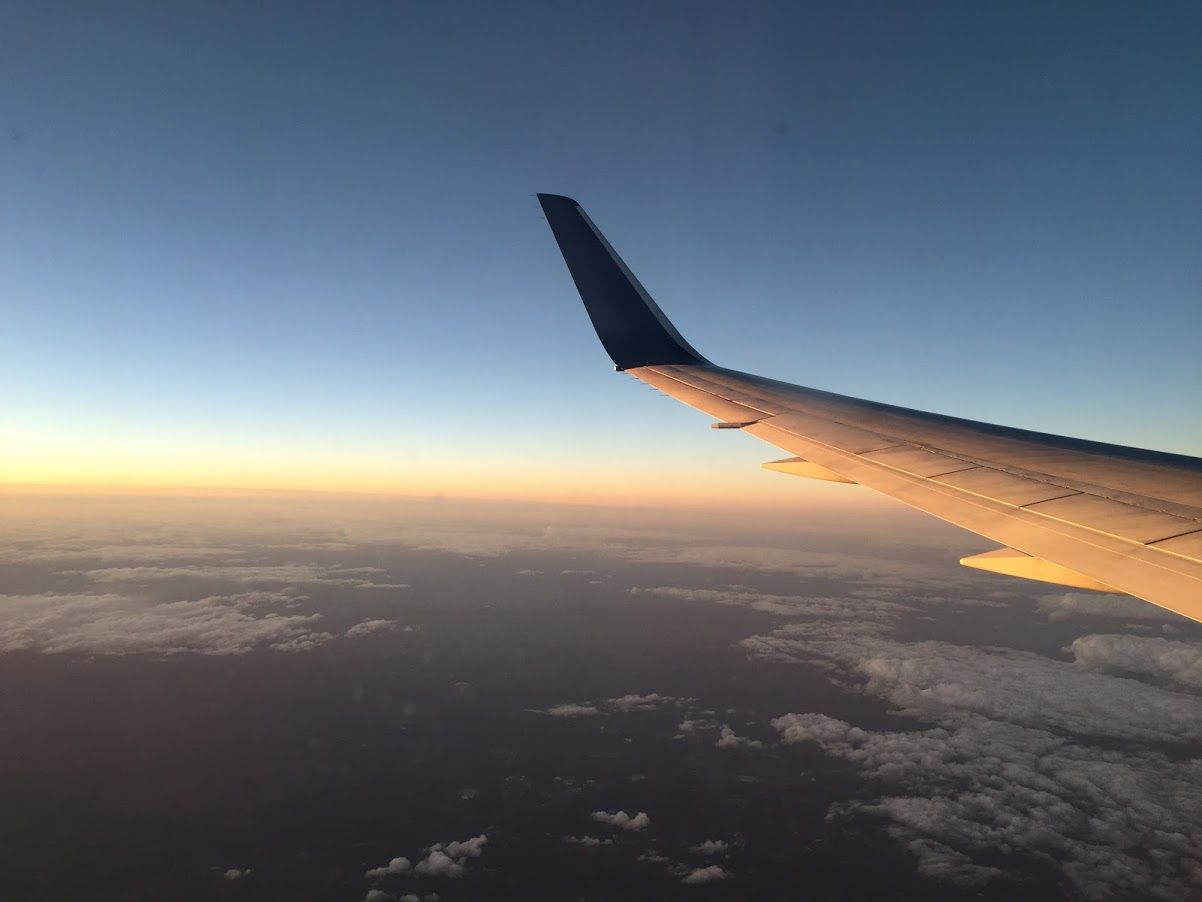 The IFE was very decent, everything on offer was free, so I watched some Simpsons and played some Solitaire. It was a pretty enjoyable flight.
Simpsons did a pretty well impression of CDG airport as far as I can tell. 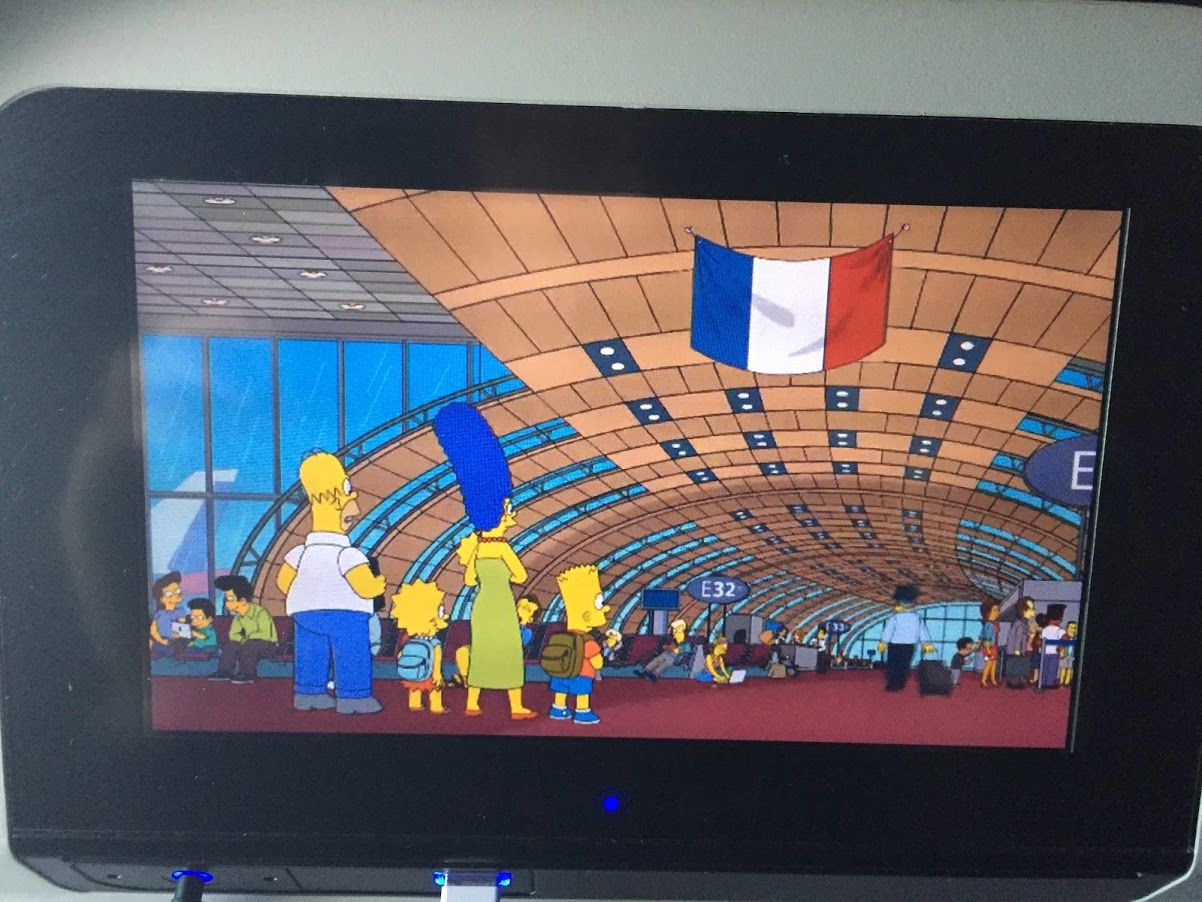 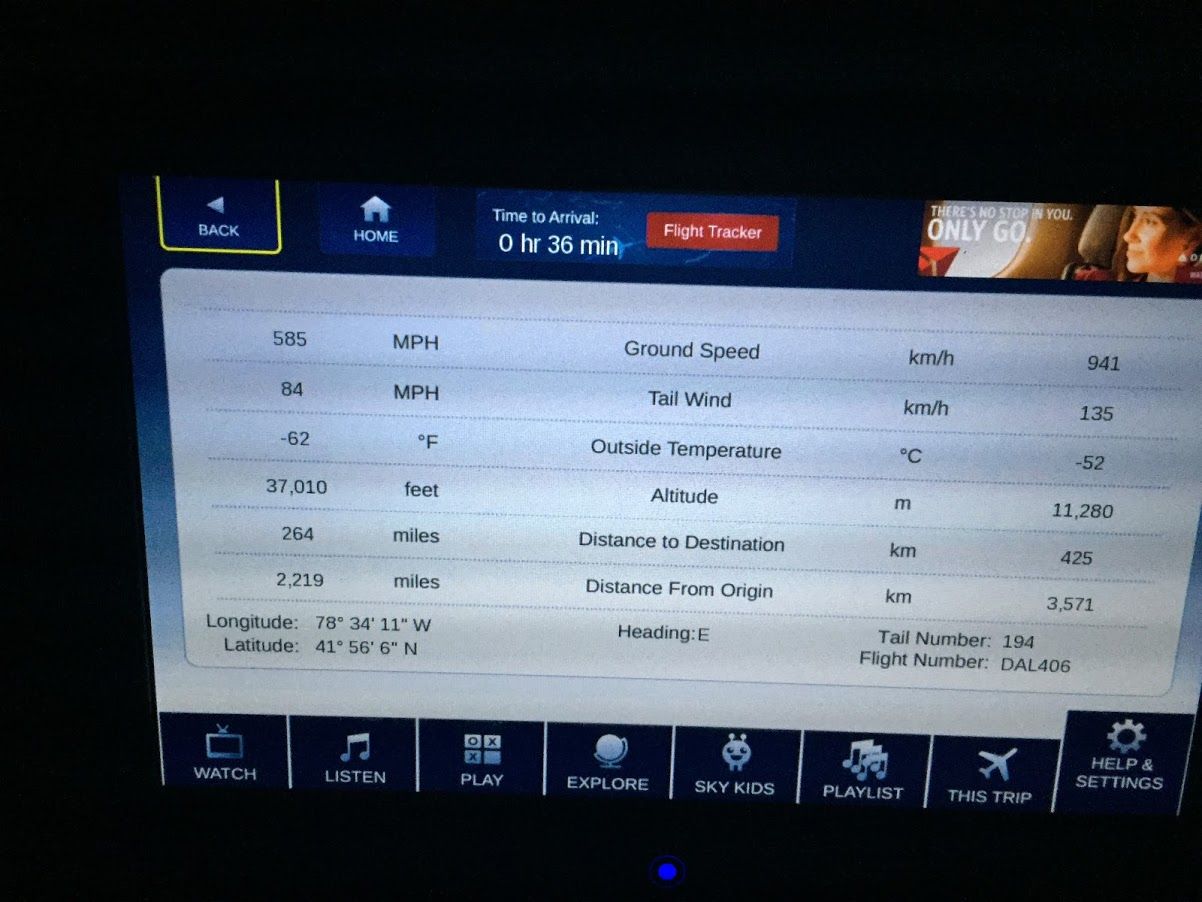 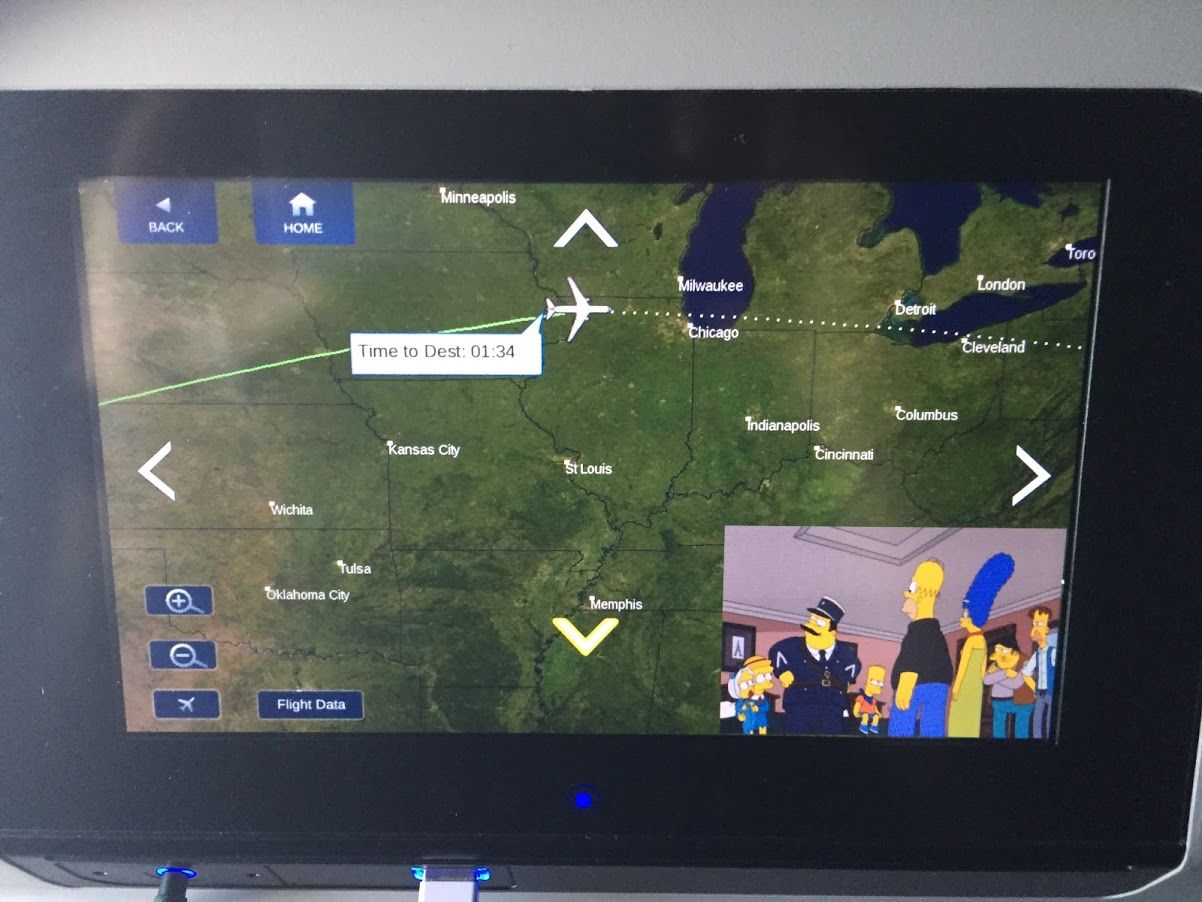 After about 2,5 hours flying time, the cabin lights were turned off and people went to sleep. I stayed awake and kept on using the IFE and enjoying my oceans of space.

After flying for about 4-5 hours descent started. As far as I could tell, we flew north of NY, circling around it.

Approach was breathtaking, overflying New York but I totally lost orientation so I have no idea what I saw. I did not document it that much, I was too busy watching. We landed on runway 13L as far as I could tell. 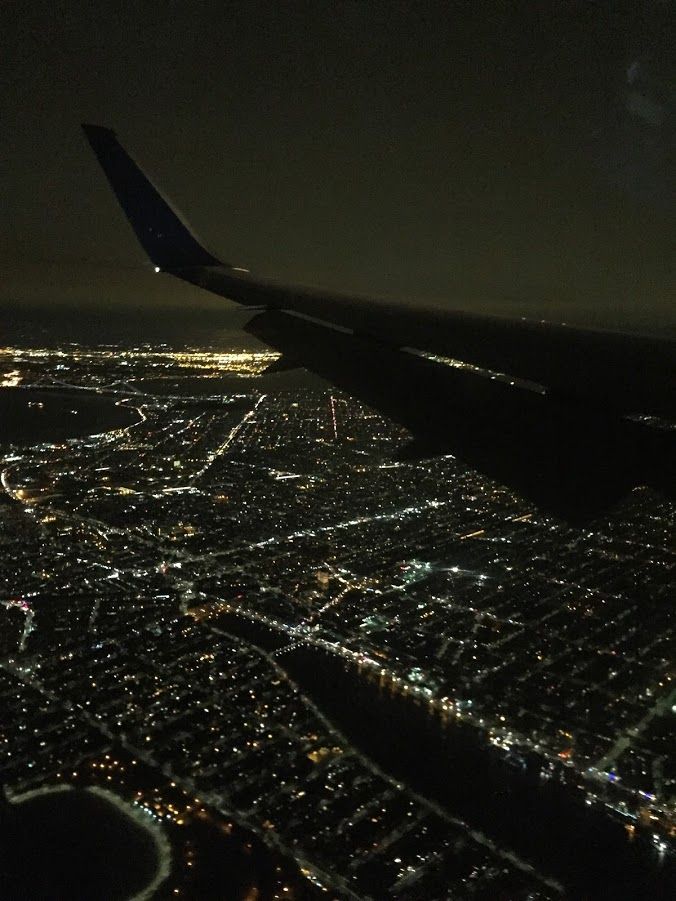 We arrived a bit too early and were released into JFK's terminal 4. My connecting KLM flight was 2 gates away which I will document in the next report.
See more

The flight itself was pretty OK even though we hit some pretty bad turbulence on the way and the catering wasn't that good. IFE was responsible and had enough on offering and the scenery outside was amazing, just like the approach.

Cabin crew was friendly and the cabin itself was clean.

Thanks for reading and stay tuned!

The airline with the best average rating is JetBlue Airways with 8.2/10.

He wrote 8 reviews about 4 airlines and 7 airports.