By jetsetpanda 3464
Published on 4th March 2017
Hi and welcome to the return segment of my short trip to CGK. I will post pics of my visit at the end of this FR in the BONUS section for those who are interested.

My itinerary is as follows:

Early morning flights are always challenging so I decided to spend the previous night at the Jakarta Airport hotel in order to make things easier. This property served its purpose but things can be improved, like the WC and room which can use a renovation and the toilet that stopped working before I checked out. Another nuisance is the lack of elevators so people with heavy luggage have to use a series of ramps to drag their belongings to their rooms.

On my way to the airport, I was planning to pay my taxi by credit card. As it turned out, the front desk of the Holiday Inn Express where I was staying informed me that the only way that I could use my credit card was through a reserved car with a driver, so I requested this service. Within 20 min. the car arrived and I was whisked to the airport in a comfortable Toyota Camry.

My ride to the airport through the southern part of the city which was characterized by new construction and high risers.

Jakarta Airport Hotel
The major advantage of this hotel is that it is located inside T2 and within meters of security and the check-in counters. Rooms and WC need a major renovation but the view is semi decent and the bed is comfortable. The two free bottles of water were appreciated. A few hours before I checked out the toilet broken down.

Security before entering the hotel.


My flight today was departing from Door 1 and upon reaching security I noticed that there was an express lane that was empty. I asked if Elite members were allowed and the attendant just waived me through. Going through security was quick and soon I was at the ANA counter which was about to be opened.

IT was very busy early in the morning.

The staff finally appeared and performed a bow greeting in front of customers. Then they took their respective places. There were a few people lined up in the Economy lane but I was the only one in Business for the moment. A smiling agent quickly checked me in and issued my boarding passes. She mentioned that I could use the Premier Lounge and after a quick pass through Passport Control I was on my way to the lounge.

This was a third party lounge used by other carriers and companies.

I was greeted by two attendants at the desk and one of them warned me that the WC's were out of order due to a water problem throughout the airport. Great, first the toilet at the hotel and now this. Good thing that I did not have to use the WC.

The place was pretty big and had plenty of seating areas. The buffet consisted of salad, a few hot items like chicken porridge, grilled chicken, fried bananas and an assortment of pastries.


The WC had a shower but I did not use it.


I headed to to the gate where an agent sitting at the entrance checked my boarding pass, detached it and gave me the stub before allowing me to enter the area. There was a counter and seating on either side of the room. WC's were located one floor down which was kind of inconvenient for pax who had to bring their luggage with them through the stairs.


Getting ready to board.


Boarding was very orderly with priorities dutifully respected. At the door there was a FA greeting passengers with a smile.


The flight today was not going to be full and I was lucky to score a row for myself.


It was a raining day outside.


FA's distributed forms and welcomed pax with a bow after the announcement.


The door closed and we taxied out to the runway .


This is how the darkened window looks compared to one that is not.


The service begins with the customary wet towel and a bottle of water.


The visual menu makes its appearance and the choices for breakfast were fried fish with rice OR omelette with chicken pate. Both dishes were served with probiotic drink, potato salad, soba noodles and fruits.


I chose the Japanese option and the fish was tasty - more of an Asian comfort food with all that warm rice. One thing that I don't understand is the serving of "fried" dishes in an airplane cabin. In this environment the crispiness of the fried food does not maintain well so it becomes a soggy lump after a while. On breakfast flights, one of the components is a probiotic drink like Yakult.


Main dish surrounded by veggies and a side of rice.

We hit some mild turbulence after the meal but FA's still performed a coffee and tea service advising passengers to be careful with the drinks.


Meanwhile outside of my window…


At one point I decided to stretch my legs and went up to the galley to ask for some souvenir items. I chatted with one of the FA's there and she asked if this was my first time flying NH and how I liked it. I told her that so far I was very impressed with the professionalism and top notch service of the crew and she thanked me for choosing NH. She proceeded to ask for my seat number and said that she will stop by with some things.

I returned and decided to browse through the selection of films but couldn't find anything that interested me. Eventually I dozed off for a bit. At 1:30 hr. before arrival the snack service started with a chicken sandwich and wet towel followed by drinks.

During the flight I asked a FA passing by if she had a pen. She told me that she will get back to me and appeared to be in a hurry. I later found out that she was busy trying to take care of a child that felt sick and she was in the back of the plane with the mom and kid trying to comfort him. I almost forgot about my request until later on when she returned to my seat with a pen in her hand and thanked me for waiting so patiently with a smile. I was very impressed by the way that she dealt with this situation without forgetting me and this really convinced me that ANA crews are among the best in the industry.

Before arrival the basket with candies was offered but I declined. Then the FA that I talked to earlier in the galley appeared and handed me a little pack full of things. There was also a card with a personal note from the crew thanking me for flying NH. That was very special touch and made this flight truly memorable. If the crew is reading this report, I want to thank you once again for taking such good care of me and making my trip so fantastic. This left me with a great lasting memory of this trip.


We parked at a remote location and had to take a bus to bring us into the terminal, which meant a chance to see the airplane close up.

A great hotel that felt more like a "boutique" property with its fun decor and freshly cooked buffet breakfast with a variety of rotating local dishes every morning. The location is extremely convenient just a few meters from Sarinah dept. store and restaurants nearby. I paid about USD 45 (EUR 42) a night at the hotel website which was a superb value.


First time that I tried "salak" or "snake" fruit, a sort of palm fruit with a scent that is floral with pineapple and guava undertones.

Morning walk around the neighborhood

Jakarta is a big city full of contradictions. If Hong Kong is considered by many to be the New York of Asia, then Jakarta is the Mexico City equivalent - sprawling, energetic, polluted, extreme poverty next to ostentatious wealth, friendly people and horrible traffic congestion among other things.

While walking through a food stall alley, I found this curious and friendly "local" staring back at me and I just had to take this shot.


Setting up the shop. 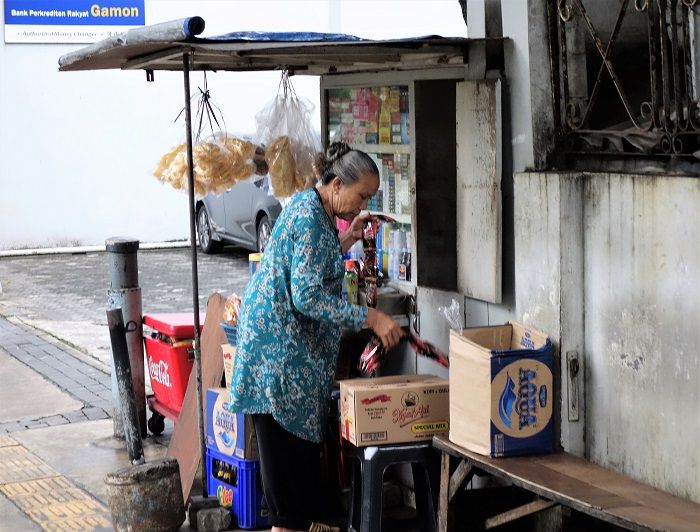 Rooster in the parking lot.

I was able to visit the mosque during prayer time thanks to a security guard who escorted me inside and gave me a private tour. This is the largest mosque in Southeast Asia with a capacity for 200,000 people. "istiqlal" means "independence" in Arabic.

Standing in front of Istiqlal Mosque, this church was consecrated in 1901 and built in the neo-Gothic style. When I visited there were 2 weddings happening and I was privileged to witness this festive occasion discreetly from the back.

Gorgeous colonial ambiance with views to match. I ordered a beef rendang and ayam gulai (chicken in a spciy Indonesian curry sauce). They tasted great but the beef was not as tender as I expected it to be.

Contemporary and stylish restaurant with excellent food. I arrived here by 23:00 to have a bowl of "laksa" soup. It was delicious!

This restaurant specializes in "padang" style food which hails from West Sumatra and has a very particular way of serving. Once the guest sits at the table, a server brings all the dishes offered at once and stack them up in front of the patron. You get charged for the dishes that you take. I was curious about this type of service but I don't think that I will have it again. For once, the untouched dishes are destined to be served to the next patrons and the dishes that I ate were lukewarm at best.

The Premier Lounge was spacious and provided a decent assortment of food, especially this early in the morning. It's unfortunate that there was a water problem at the airport that prevented guests from using the WC's but this was not the fault of the lounge and it was eventually resolved later on.

Once again this was a very enjoyable flight with ANA and the crew is one of the strongest assets of this airline. FA's were attentive, proactive and smiling at all times. I was impressed by the note and the bag of souvenirs that was brought to me towards the end of the flight, in addition to the pen that the FA gave me. They made me feel like a special guest and these things leave a positive impression.

The contributors of Flight-Report published 7 reviews of 3 airlines on the route Jakarta (CGK) → Tokyo (NRT).

The average flight time is 7 hours and 7 minutes.