#58 out of 78 Airlines A minimum of 10 flight-reports within the past two years is required to appear in the rankings. 343 reviews

By Niko 4854
Published on 19th May 2017
On September 6th, 2016, my family flew on United’s International Business Class product, known as “BusinessFirst” from Zurich Airport to Newark Liberty International Airport, in standard B/E Aerospace Diamond seats. The scheduled boarding time was 9:20am, but before we even got to the airport, we had a major problem. Because of the Brussels Bombings earlier in the year, the local police set up a roadblock in the beginning of the departures ramp (sorry, no pictures) and, of course, our kind and innocent Nigerian Uber driver was pulled over for over ten minutes.

While this sounds like an issue, we moved on from that quickly, as we were very excited for our first trip in an international business class, but that was quickly shot down after we saw the situation at check-in. There were three different Check-In areas, there was the Premier Access Check-In, which we had access to, but the line was unusually long, with over 6 persons in line. There was the Self Check-In tag and drop, which looked like an unorganized mess, and an Additional Services desk, which is the basic Full Service desk, and considering it only had two persons in front of the desk, we chose the Additional Services desk. 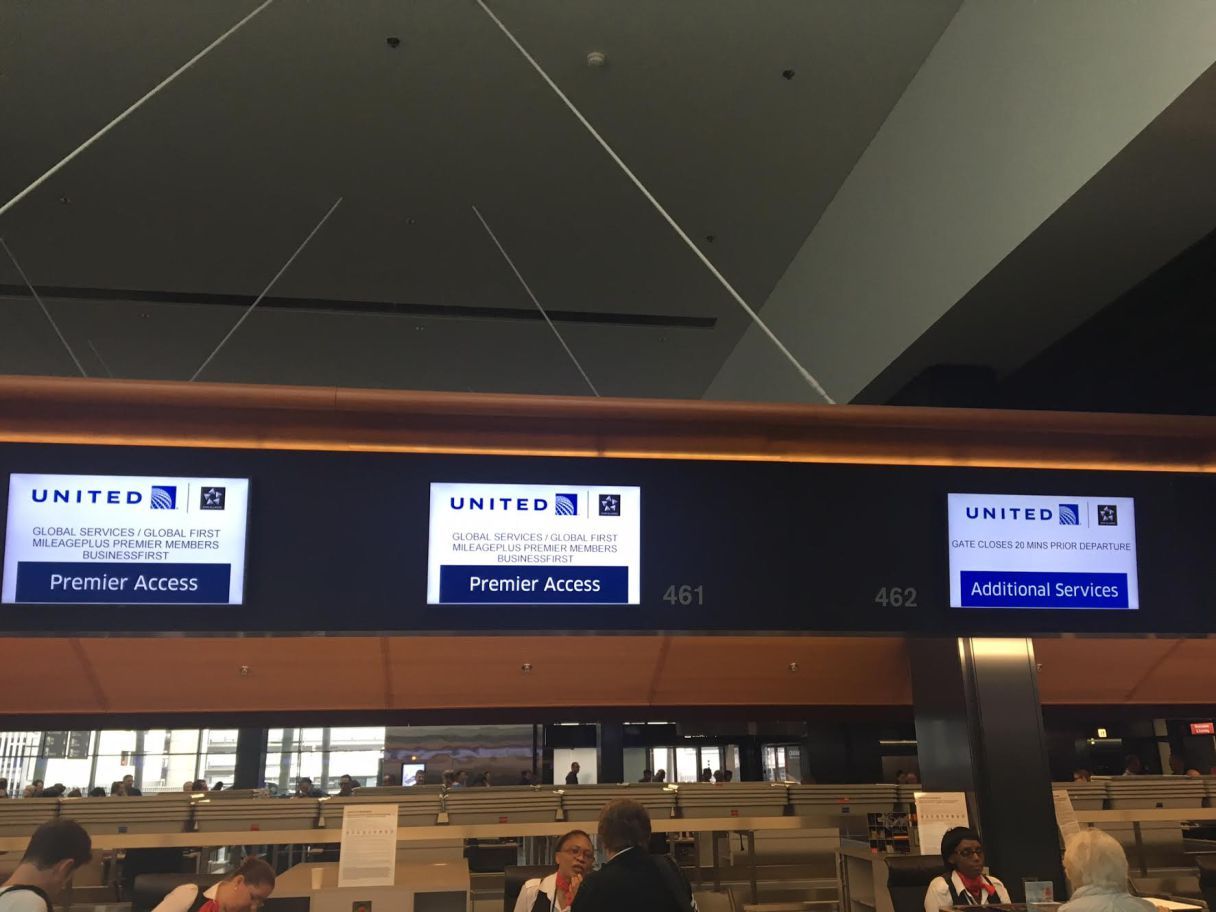 The first thing that surprised me was the fact the employees at the desks weren’t wearing the blue and yellow ties that United employees typically wear. Upon closer examination, these employees were workers of “Swissport,” an equivalent of the Red Coats that we have here (or, generic workers that work for the airport and not the airline). In true red coat style, these workers were robotic, and while they were asking “essential security questions” they didn’t seem to process anything that we said, and to a certain extent it ruined my airport experience.

The airport itself was nice, however, and like all of the international flights, we had to take an underground train (similar to Denver’s train) to go to the E Pier.

Unfortunately, the flight was boarding, so their was no time to visit the “Aspire Lounge”, and frankly, it received poor reviews anyway so it wasn’t a huge loss.

The gate, E56, was very hectic, and they checked the passports one more time. Luckily, I got to hold on to my boarding pass to keep it as a souvenir. 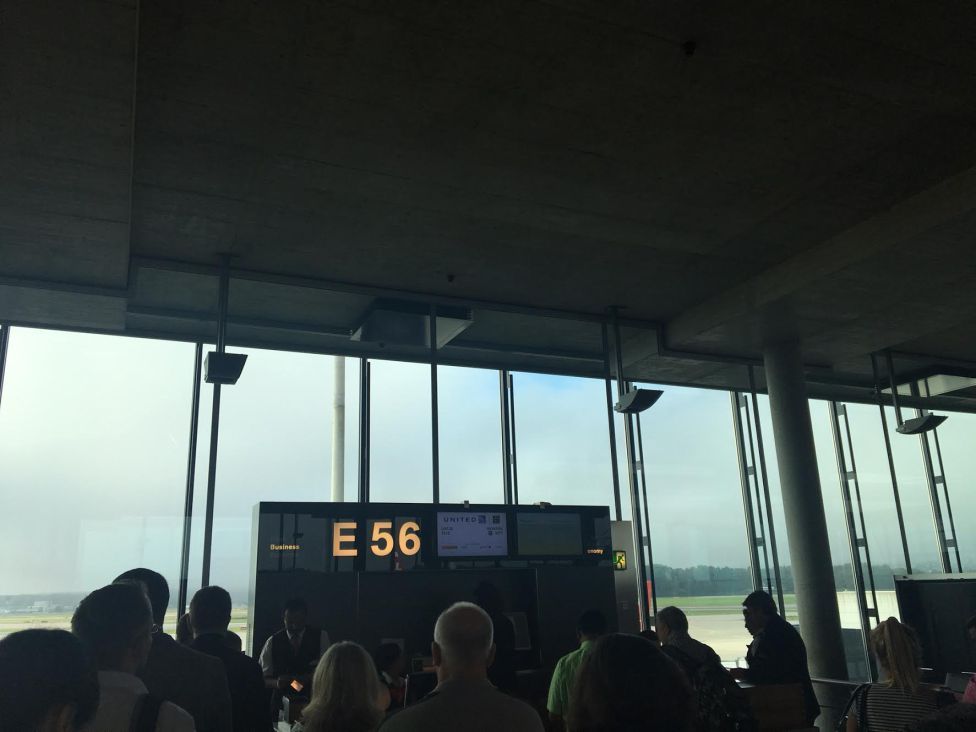 We boarded through Group 1, and I quickly recognized the crew as the same crew that was waiting for a shuttle at the Renaissance Hotel earlier in the morning. They seemed nice, and we boarding through door 2L. The cabin looked nice and clean, and the amenity kit and blankets were already waiting for us on the seats. 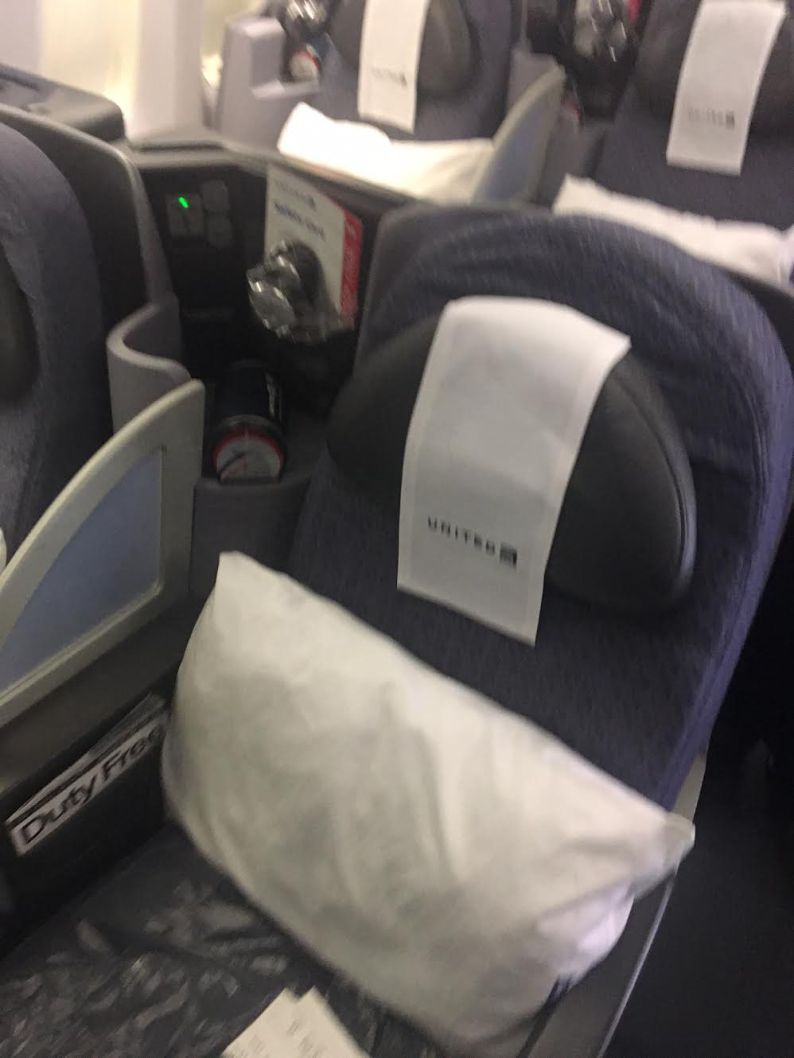 I liked how the amenities were waiting for us at the seat. My only previous experience, on TAM, the pillows, kits and blankets were stowed in the overheads, and there weren’t enough for the entire cabin. Having them on the seat eliminates that problem.

The Menu had a sleek look that I enjoyed. Executive chef Jerry McLoughlin was on the cover: 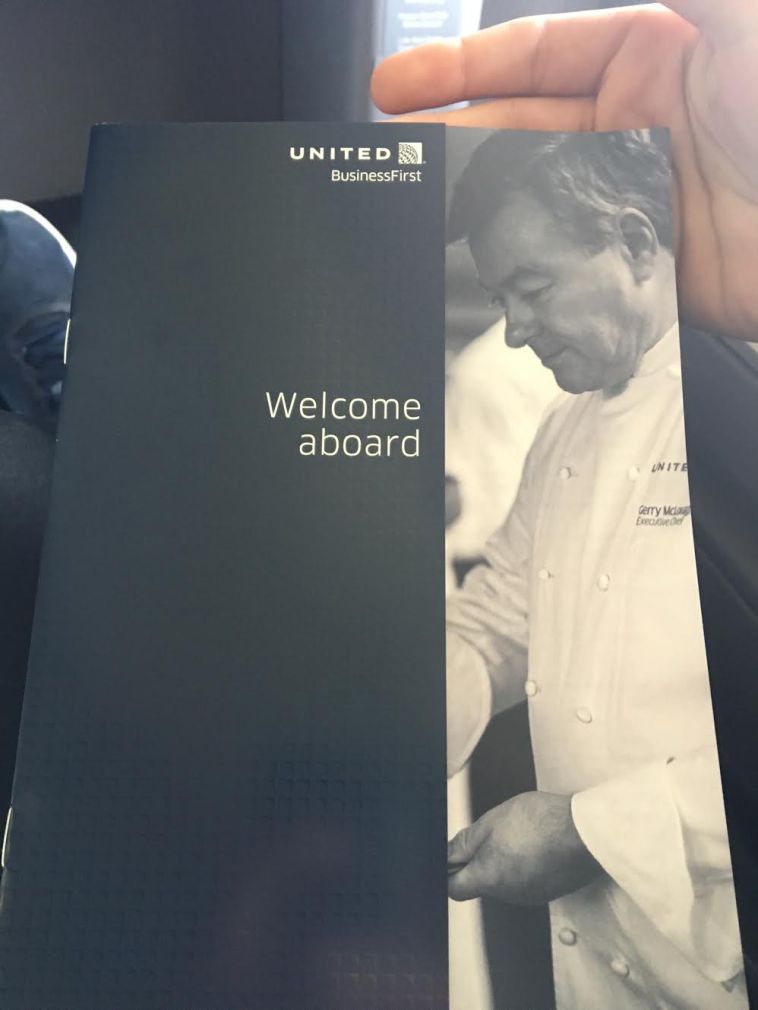 Nice look for the menus

The menu was a five course meal, with two appetizers, a choice of four entrees, and a cheese course and desert. 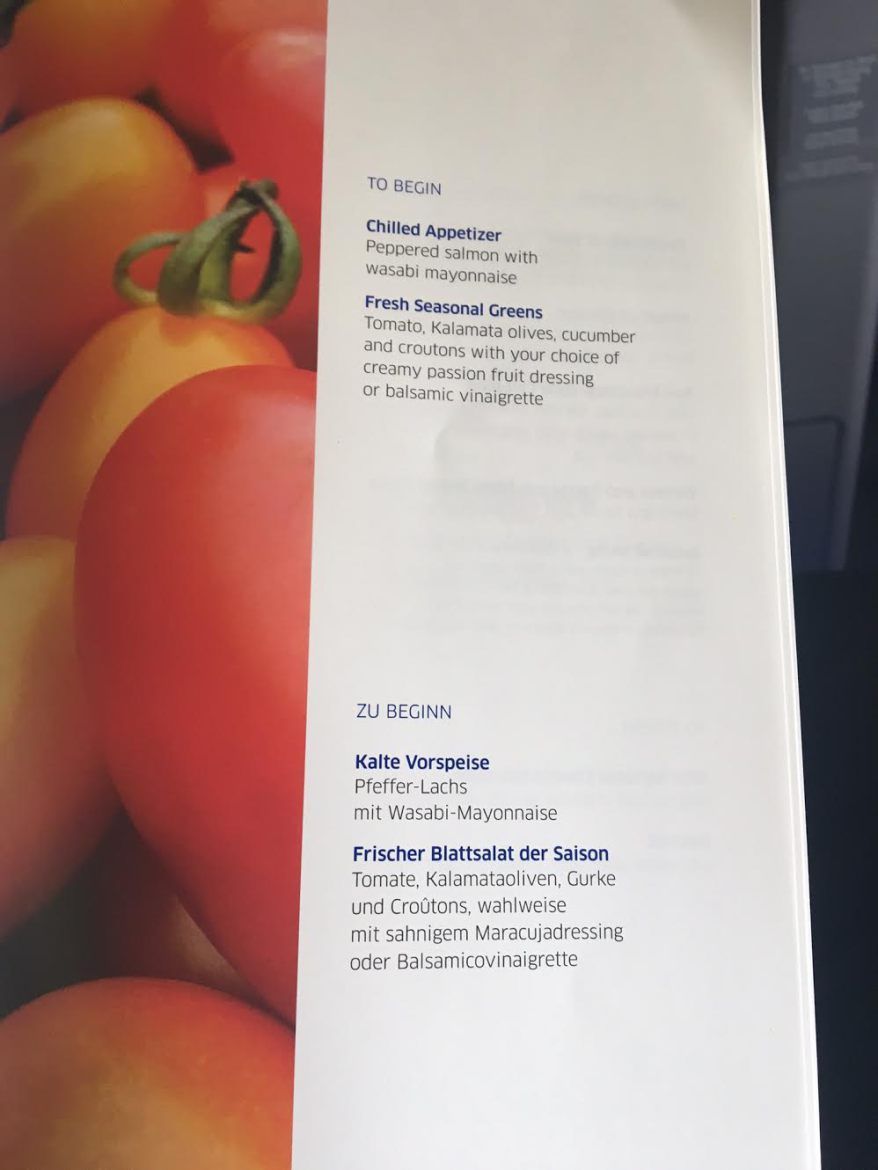 A chilled salmon appetizer and a salad to start 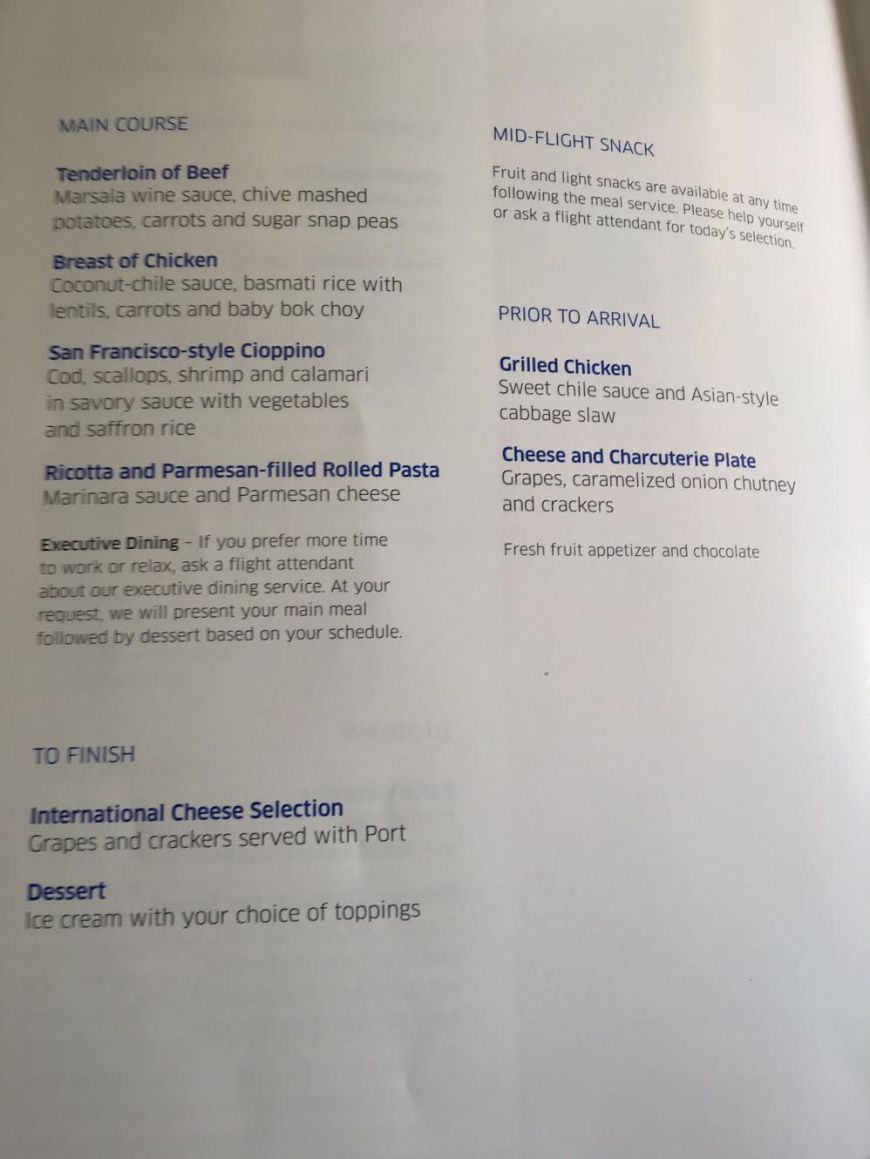 Now would probably be a good time to talk about the service, which was iffy. On my way to Europe the week prior, the entire flight crew distributed flawless service, and I was in Economy. On this flight, the service wasn’t bad at all, but every time I wanted to chat with one of the flight attendants, they always seemed like they had somewhere to be. That doesn’t mean they didn’t comply and give me a rude response, but it wasn’t overly pleasant either.

Annie, the purser working our side introduced herself by name, and said hello to us by our last names, which was professional. She explained to us how the system works, and offered us pre-departure drinks. I enjoyed some ice water while my mother enjoyed a mimosa. 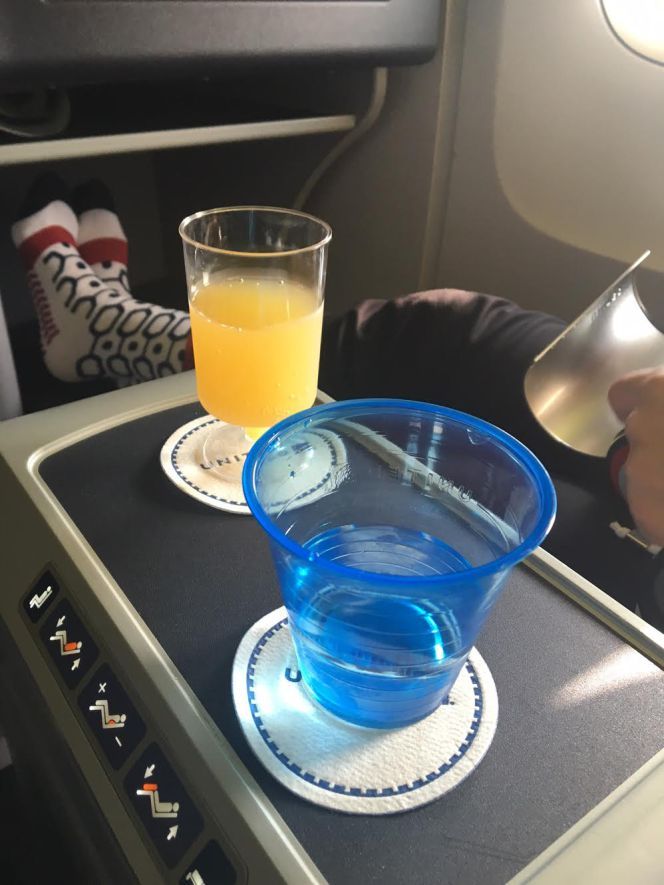 After takeoff, meal orders were taken, and an initial drink service, along with a ramekin of warm nuts were provided. The nuts consisted of cocktail peanuts, cashews and almonds. 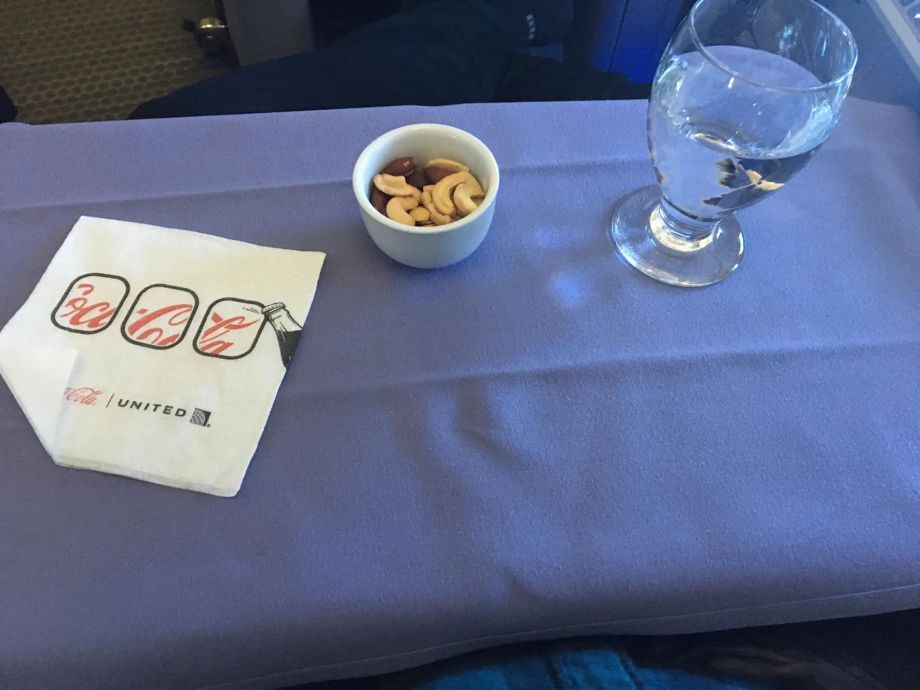 Before the first course, which was the, Chilled Appetizer, or a peppered smoked salmon dish, the bread basket was taken around the cabin, and it was well stocked with mini-baguettes, pretzel rolls, multigrain and garlic bread. 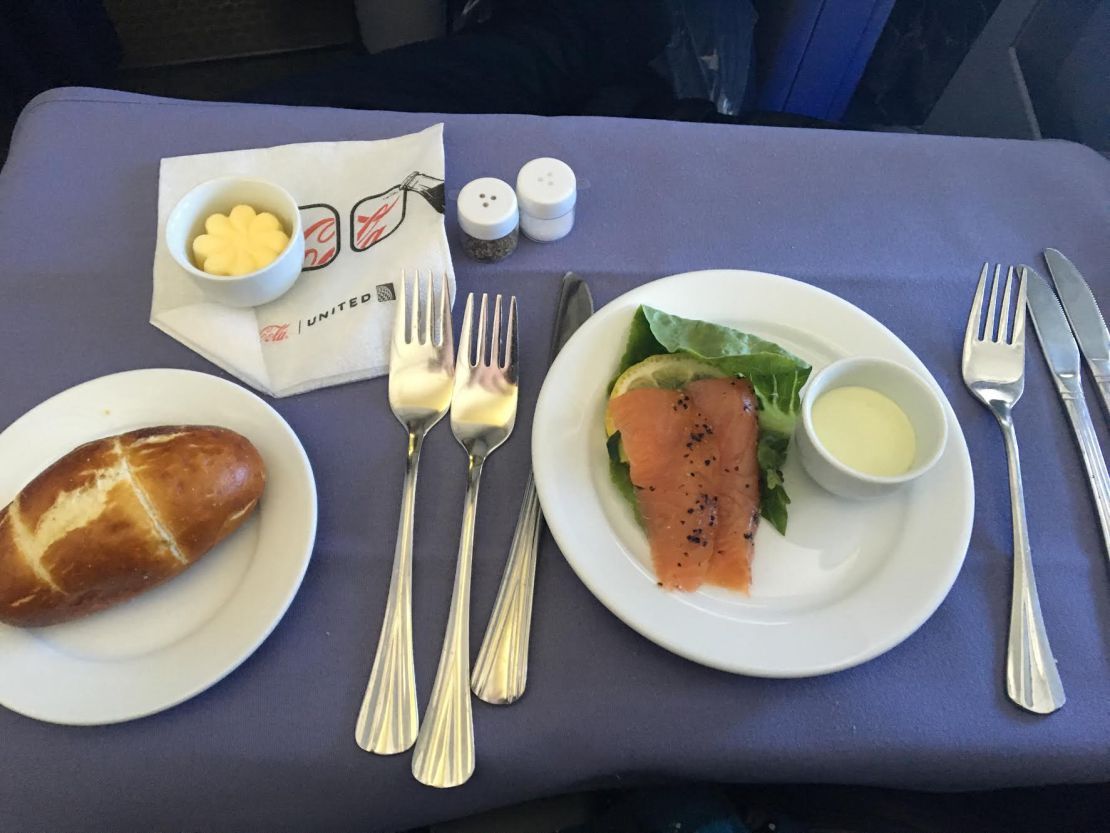 Also on the plate were small little salt and pepper shakers, and butter.

The first, course or the salmon, was very impressive. I was a little worried when I saw seafood as the first thing that came into my mouth, but it tasted super fresh, and paired well with lemon and the pretzel roll. I also had a cran-apple to drink. 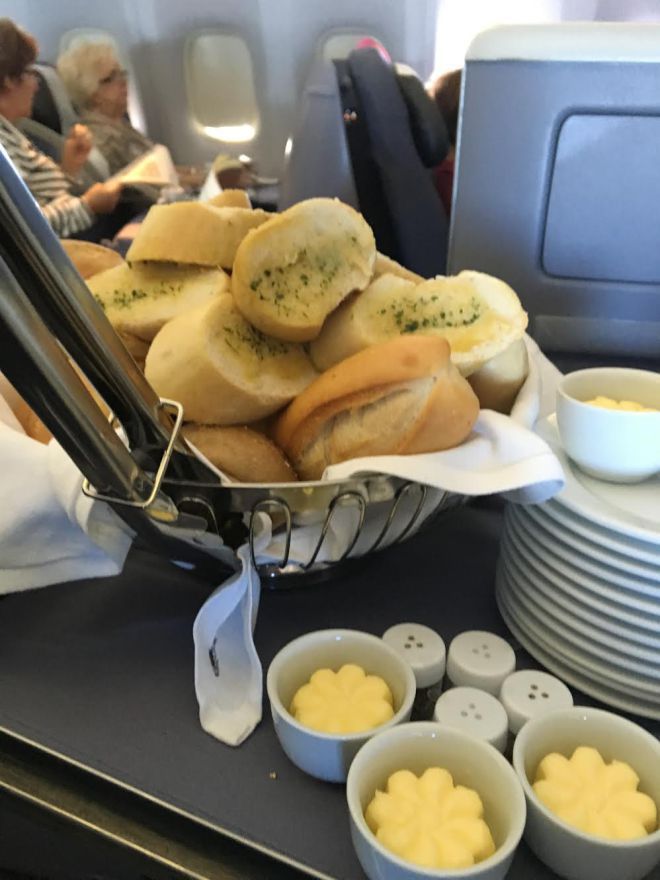 I ate the salmon and was pleased, unfortunately, the salad was slightly less-impressive. 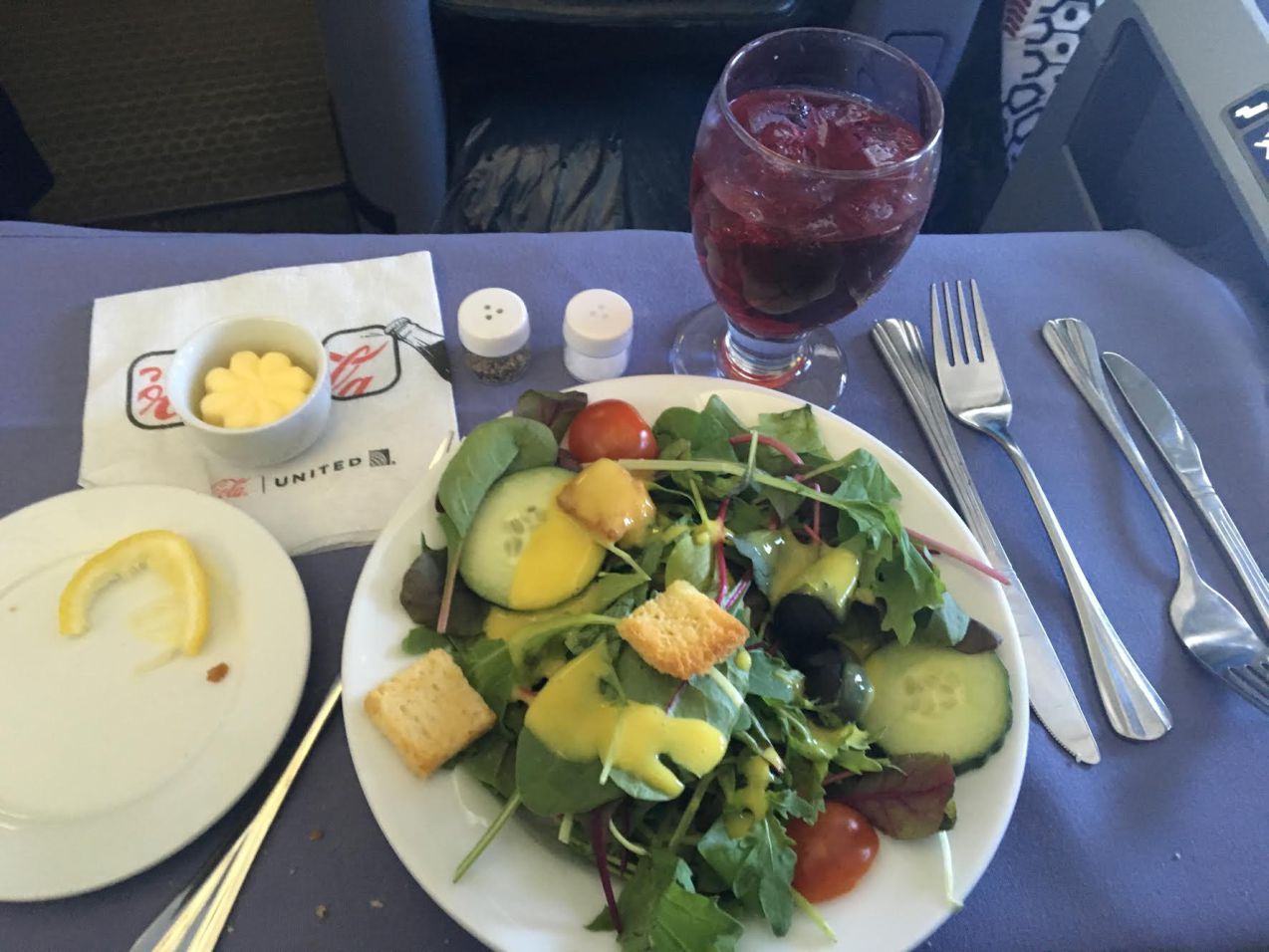 There were two choices when it came to vinaigrette for the salad, a regular balsamic and a “passion berry”. I choose the passion berry and instantly regretted it. The salad tasted fresh and sharp, but the dressing was meant for something completely different, and they didn’t add up well together.

After this, the main course was presented. I got my first choice, the Tenderloin of Beef. 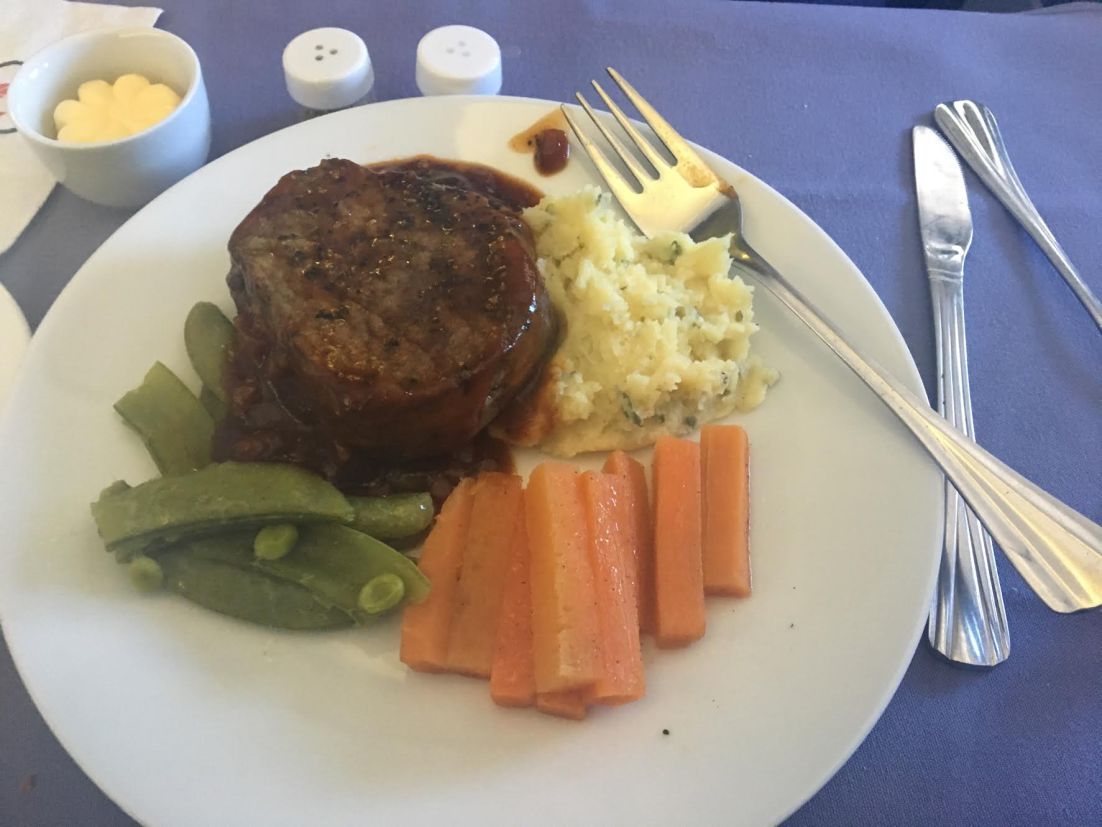 The tenderloin was actually pretty tasty, and while my parents gave it a mixed reaction, I devoured the meat, and the chive mashed potatoes hit the spot. The vegetables weren’t necessary, as they tasted like something you’d get in a good economy class meal.

To be honest, the meal could have stopped here, and there were two courses remaining. The next course was probably the best course, which was the International Cheese Selection. 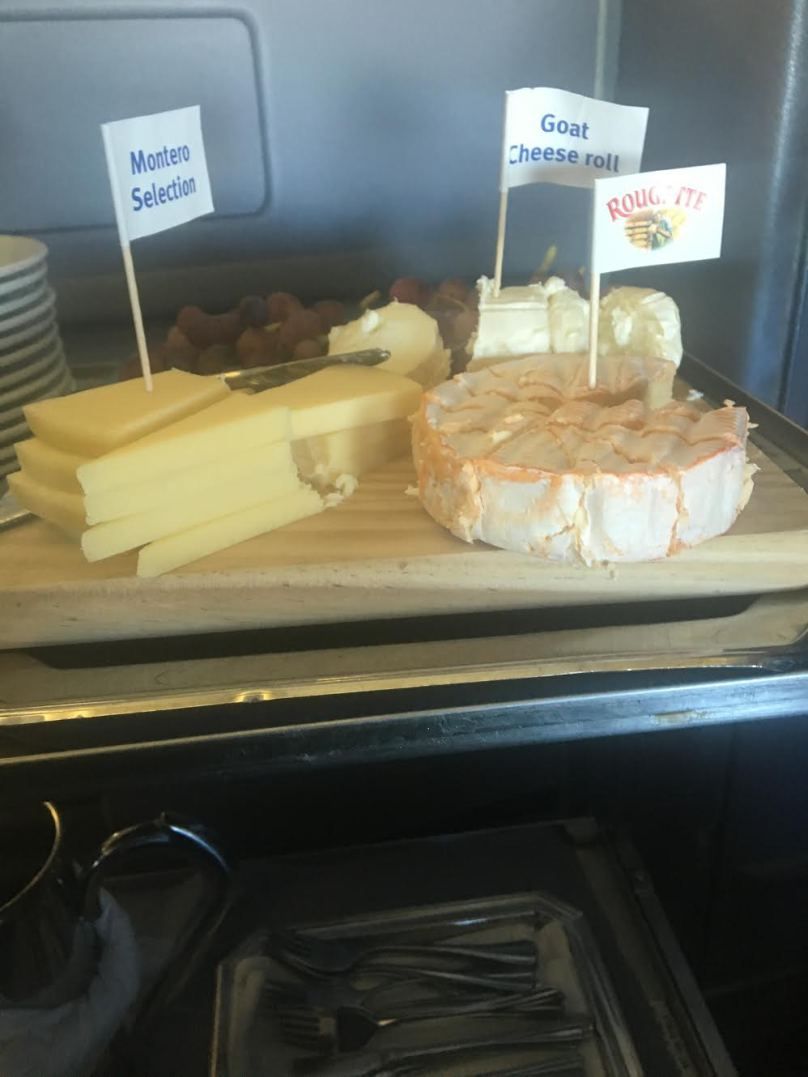 The cheese was served with champagne grapes and port for the adults. 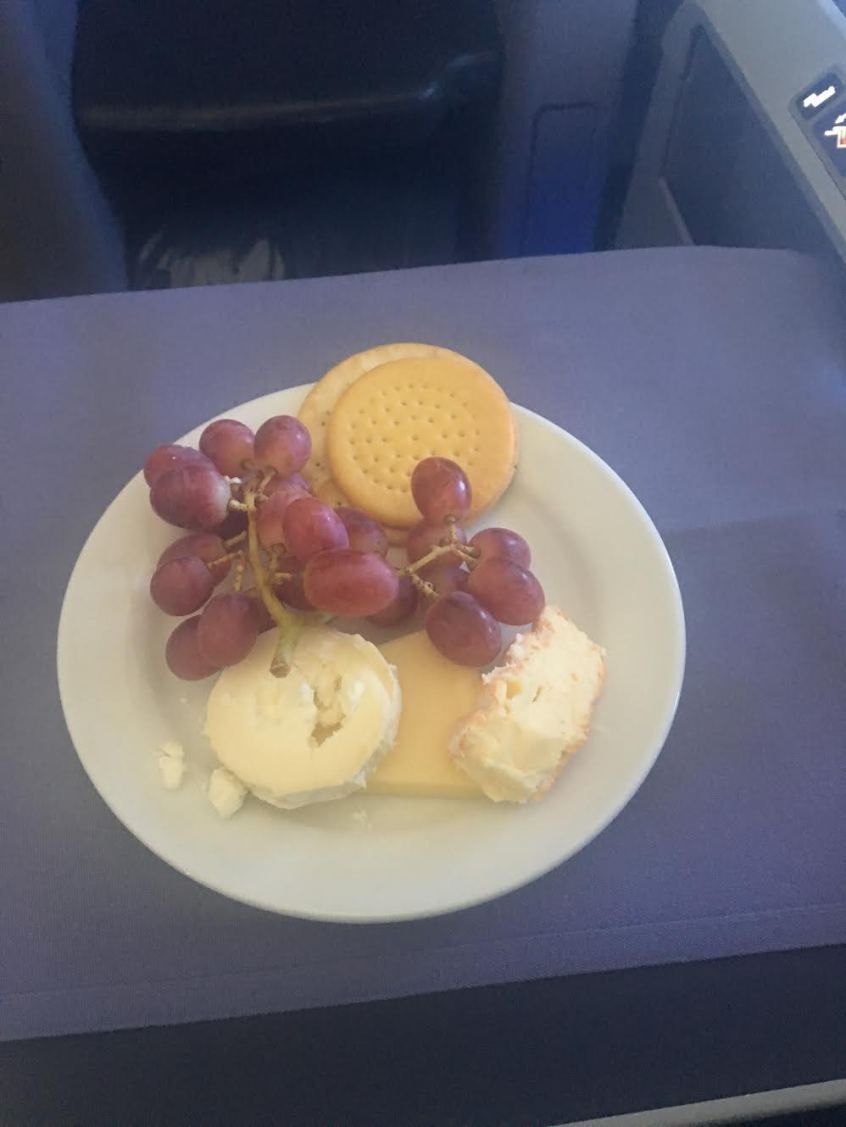 Since this was prepared live from a cart, the presentation was slightly messy, but the taste was exceptional. The grapes seemed to be European and were perfectly chilled.

After the cheese course, Ice Cream Sundaes were served. 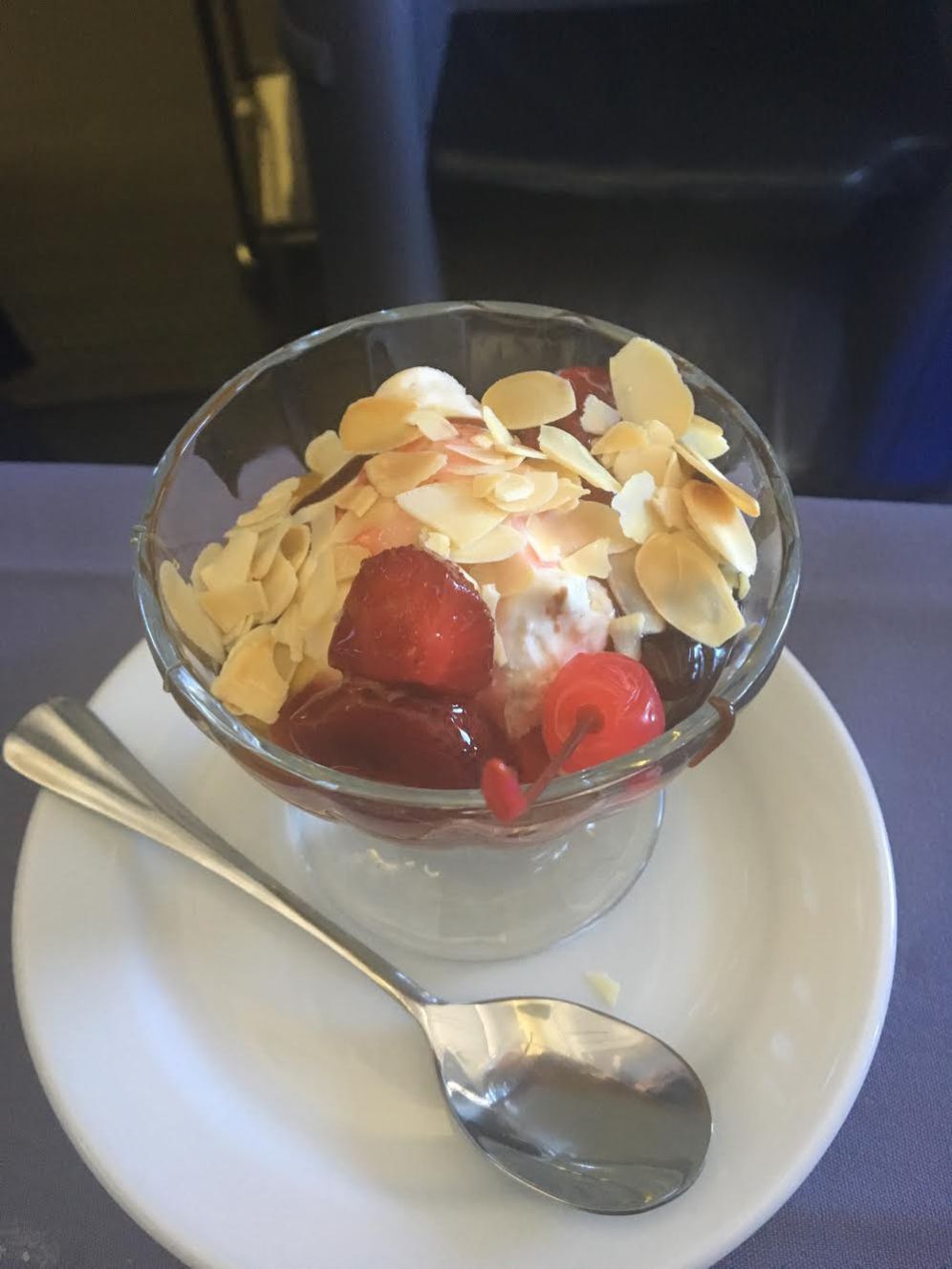 I enjoyed all of the toppings, which made it a very enjoyable treat. There was nothing disappointing about this part of the meal!

After this service (which lasted over two hours), the cabin was dimmed, and water bottles were distributed. 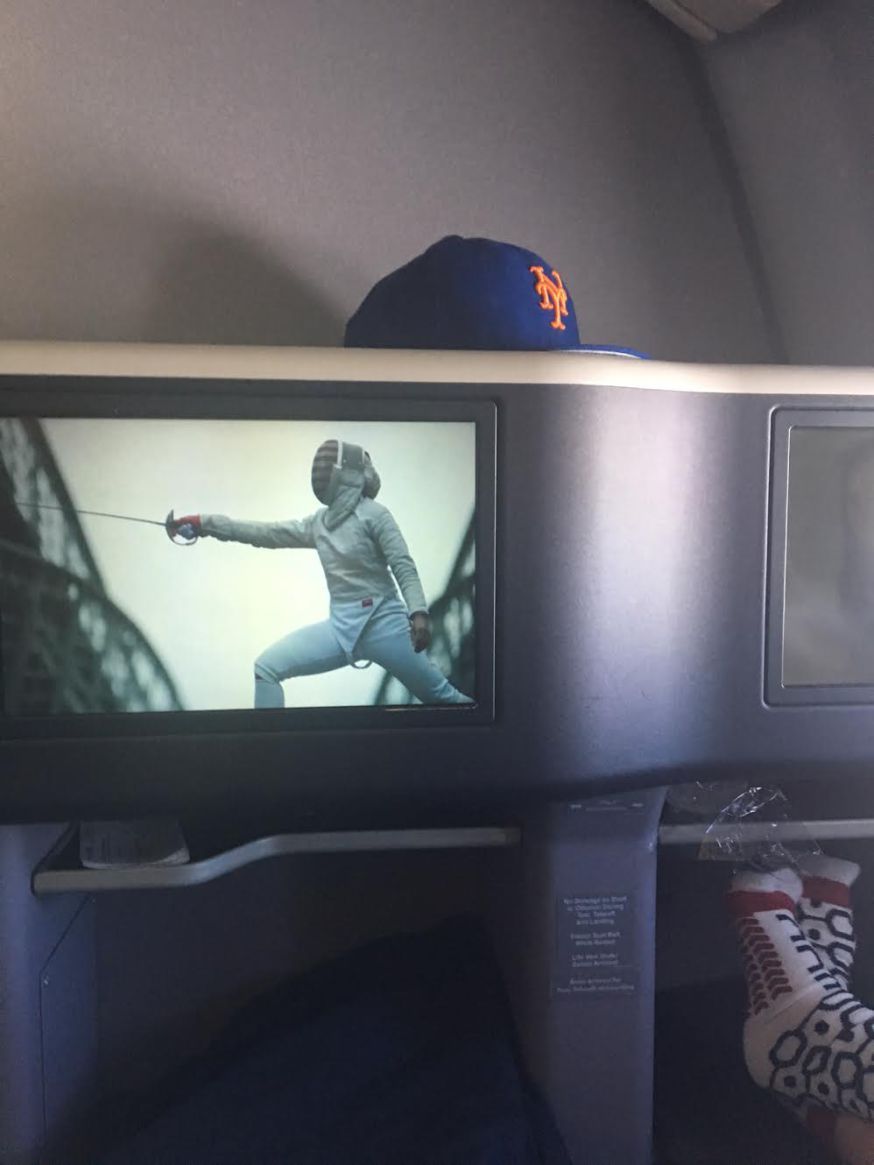 I then watched a movie, and relaxed for about two hours. Unfortunately, I didn’t sleep much, not because it wasn’t comfortable, but I was too excited to sleep for more than an hour.

So, I went to the galley in the rear to see what the situation was. There was a light selection of snacks, chips and around five hours into the flight, hot cookies were distributed and placed into the back. 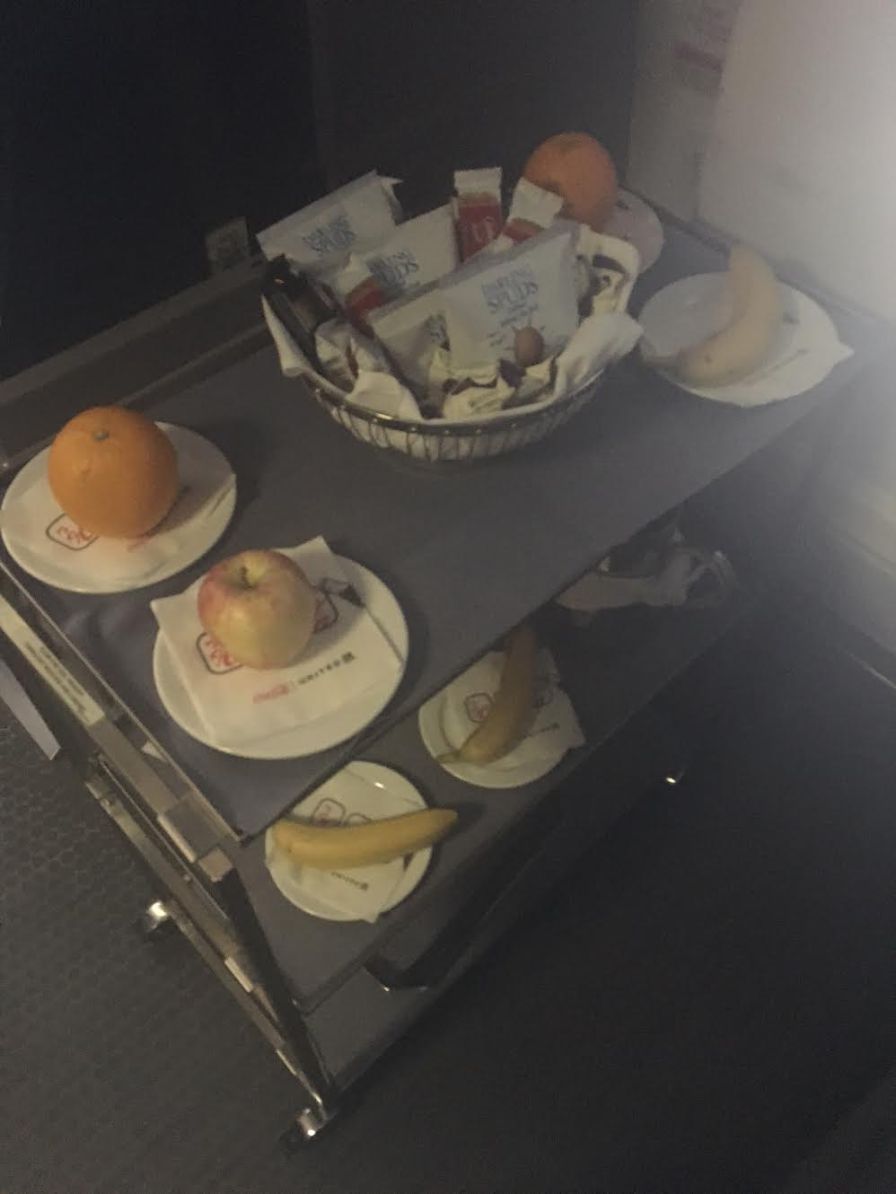 I took an apple, some chips and a Lilly O’Brien brownie. 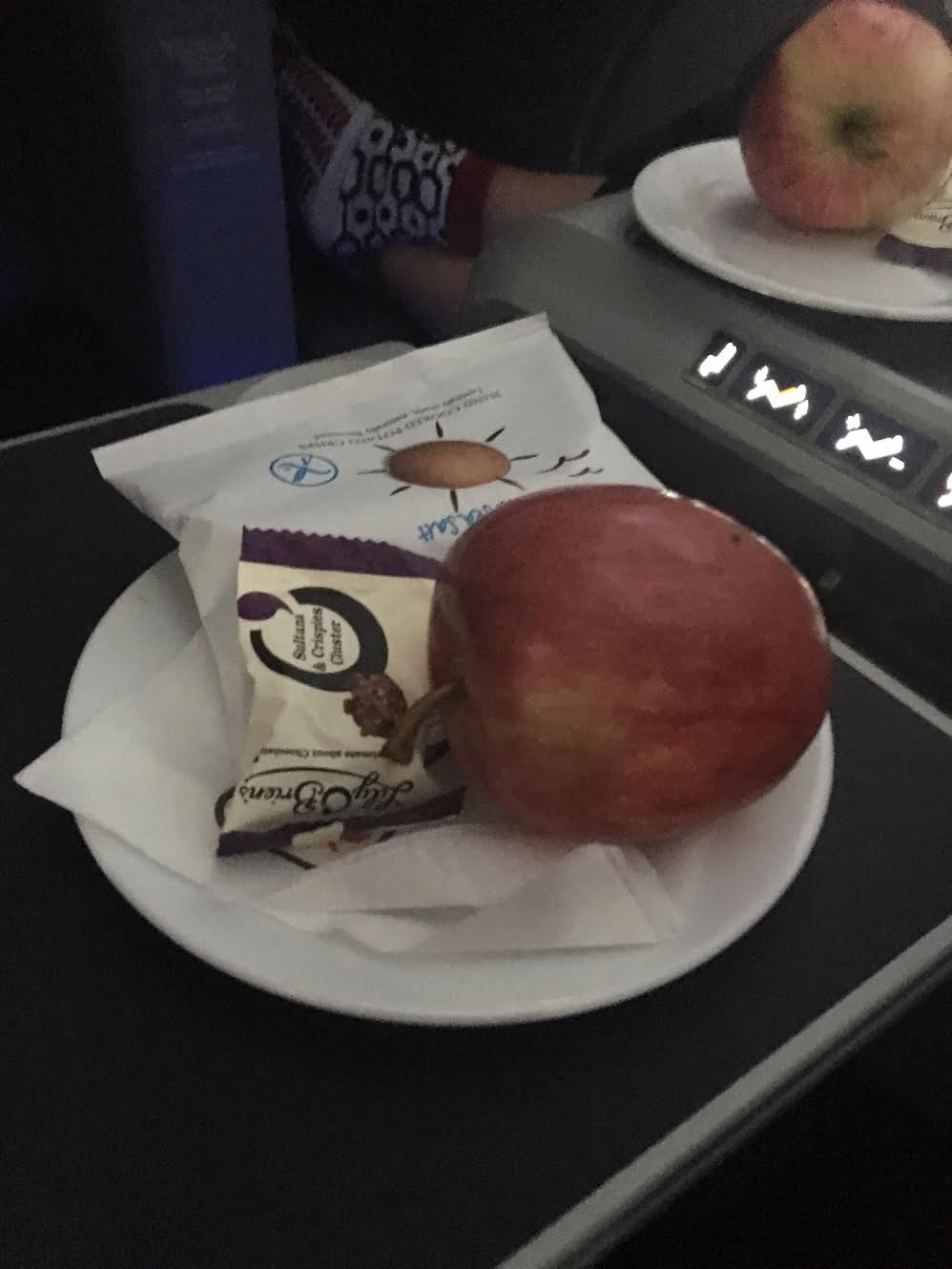 I then watched an episode of Brain Games, which was very good, and a great way to burn time.

At this point, we were close to the Canadian coastline. 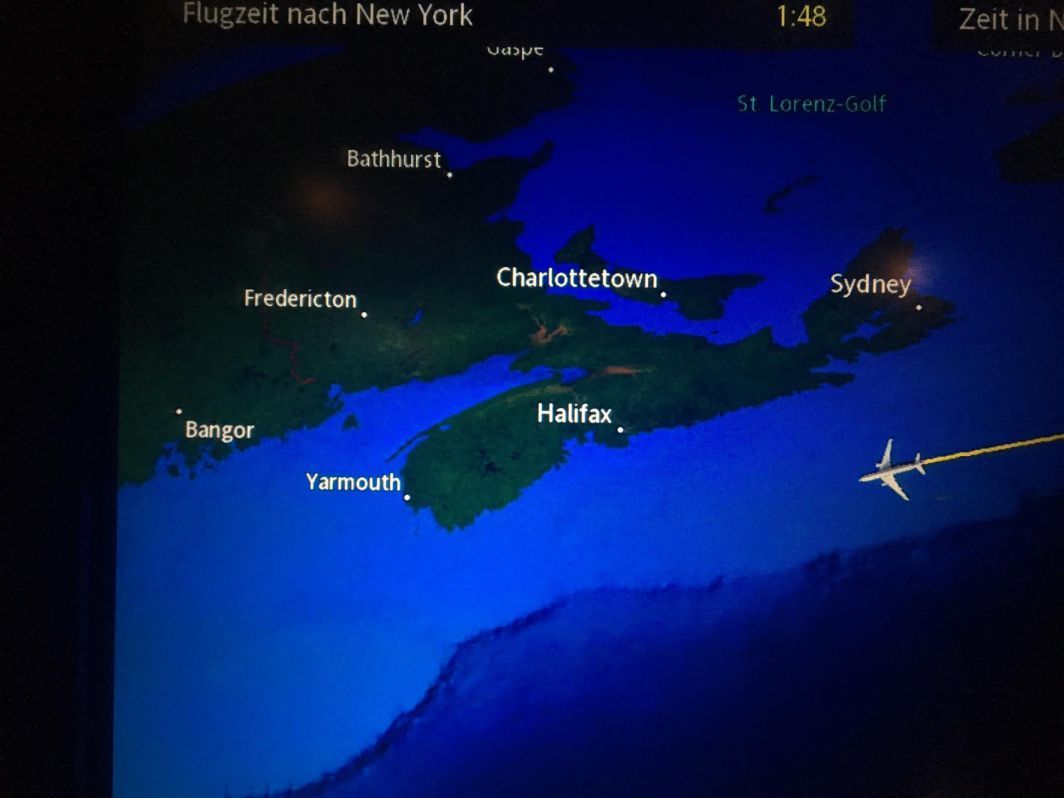 I didn’t really feel like eating any more but there were two choices for pre-arrival, a chilled chicken or a cheese and cold cuts. I chose the chicken, and unlike the first service which was served in courses, this was a rushed service served less than an hour prior to landing. 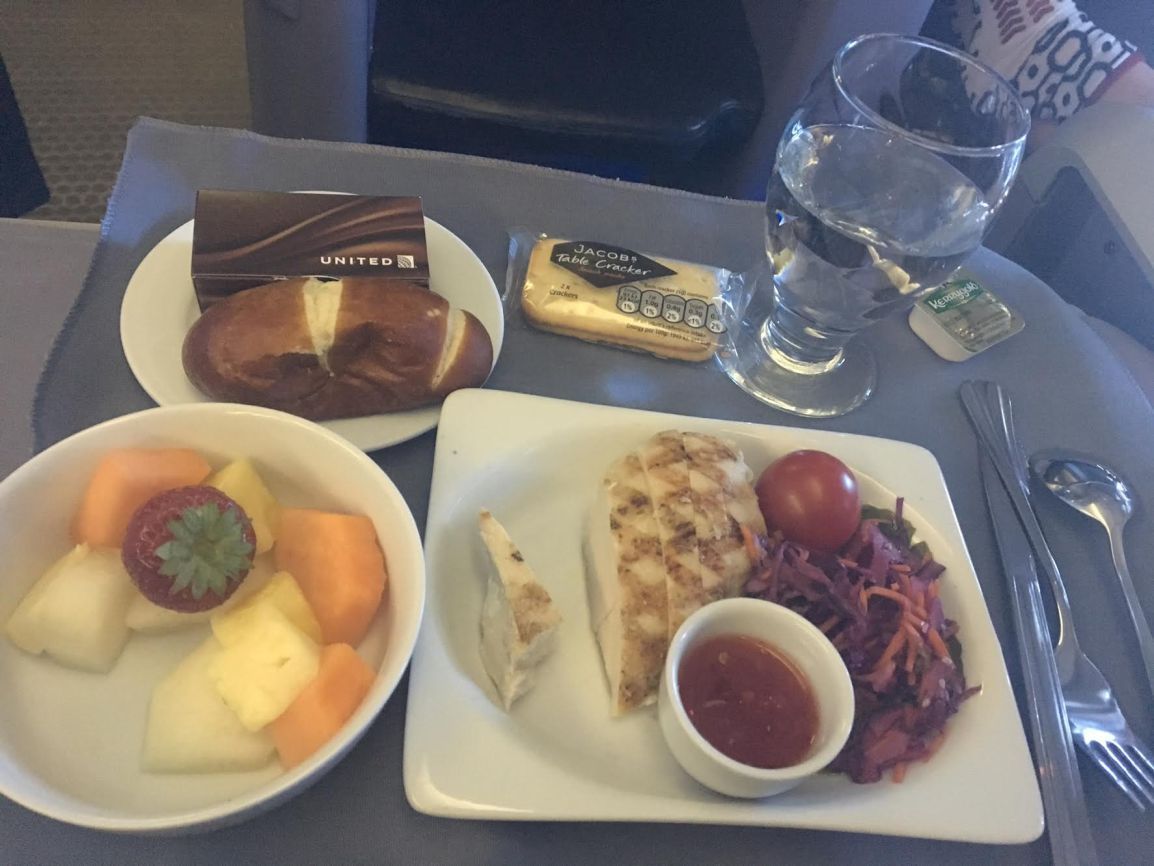 Grilled Chicken with a Asian Cabbage Slaw, side of fruit and chocolate truffles

The side sauce was surprisingly very good, and the chicken being chilled made it better, especially when you consider this was kind of a wake-up meal. I enjoyed a pretzel roll on the side and the fruit was pleasing, but didn’t really fit in.

After that, Annie and Carlos, the other premium cabin supervisor, thanked us for the service, cleared our plates and we descended for the Newark area.
See more

First off, I would have appreciated more pro-efficient re-fills on drinks. No, they didn’t keep the glass empty for more than two minutes, but I had to ask for “more” of something at least five times, which made me feel un-comfortable and as if I was overstepping my bounds by asking for too much. That shouldn’t be the case in any premium cabin.

Would I fly BusinessFrst again? Yes, but considering it’s being phased out for the new Polaris, I won’t have the chance. I do look forward to trying out United Polaris, however.

The contributors of Flight-Report published 5 reviews of 3 airlines on the route Zurich (ZRH) → Newark (EWR).

The airline with the best average rating is Privatair with 8.0/10.

The average flight time is 8 hours and 50 minutes.

Niko is member of Flight-Report since May 2017.