By KL651 2927
Published on 12th February 2018
It's been a while since I last posted a Report in English, and I thought this flight would be a good opportunity to change that.

So here I am for my almost annual trip to DC.

I booked this flight in October after AF/KL started a promotion to the US with flights to DC for $550.
I was about to book those flights with KL via AMS on the 789 and AF direct flight back to CDG, however I checked the prices on Star Alliance, as I had a $100 voucher on UA and bingo, they had matched that fare!

So, for $450 I got this nice itinerary, flying back from DCA, as I thought it'd be more convenient to access than IAD.

UA departs from Terminal 1 at CDG, which is mostly used by Star Alliance.
Though it is the oldest terminal of CDG, I love its 70's architecture and after the recent refurbishment it is nice (again), and convenient as it is much less crowded that T2 Pier E of F.

There was no line at check in, I received my boarding pass and was given instructions on how to get to my gate and when from an efficient but not overly friendly agent.

Then it was time to ride the the mythical elevator to the satelitte, the highlight of the CDG1 experience 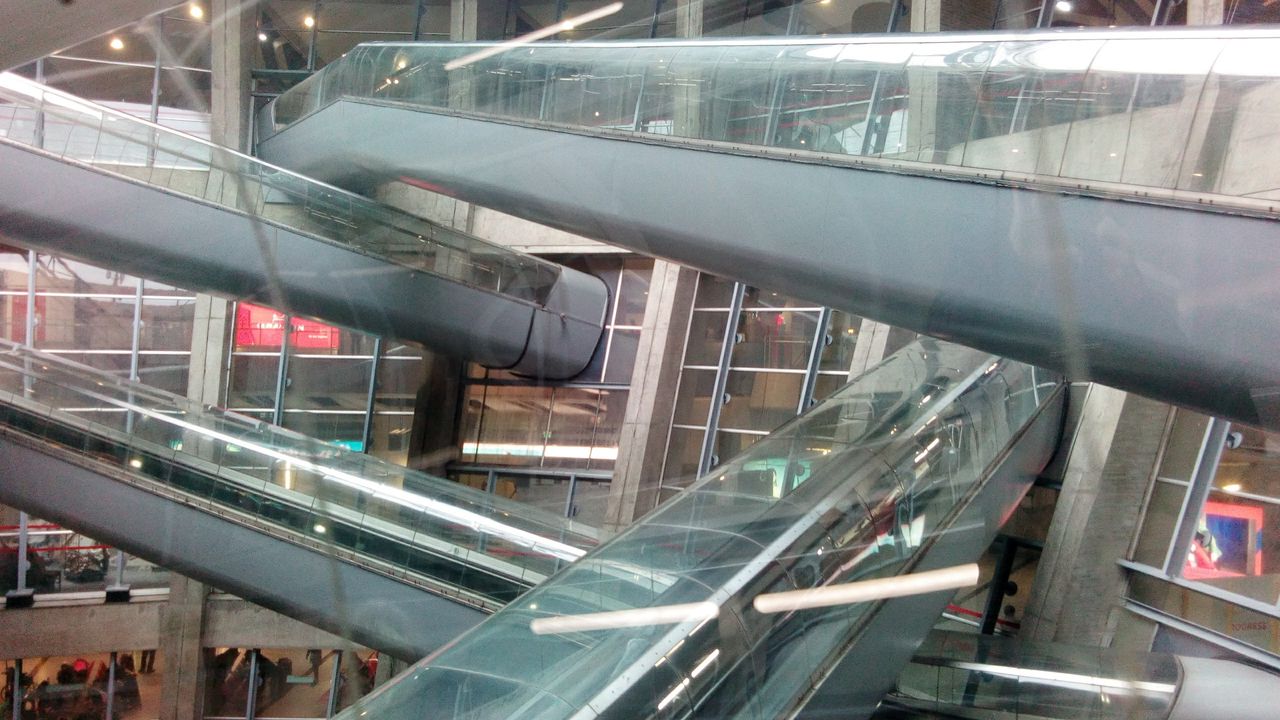 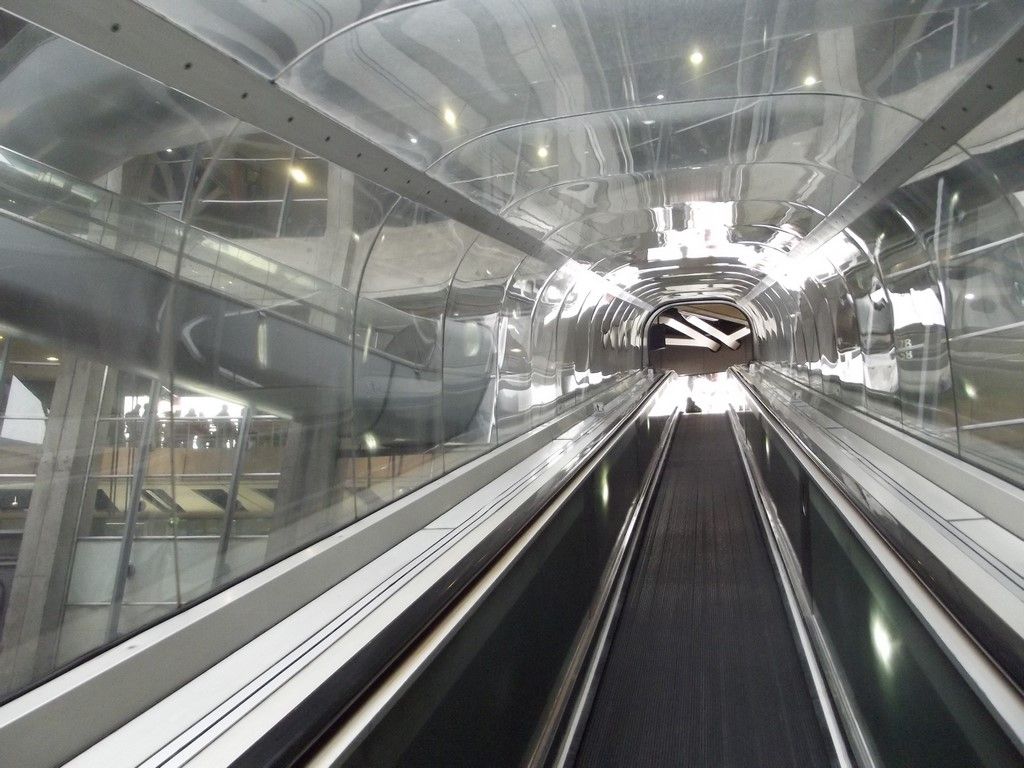 Once you exit the elevators you pass immigration, the wait was decent at 10 minutes.
All in all, I was airside less than 20 minutes after entering the terminal.

After immgration there's the mandatory Duty Free zone but you do not go through it, you just pass it, so you're free to enter the shops or not.

After buying a bottle of Champgne for my friends, I was off the satellite, via another escalator that passes under the taxiway

The fact that gates are in several satellites means that there are usually no more than 2 flights departing from there, and both the ride to the satellite and the waiting areas are quiet, with only announcements regarding your flight.

After passing security in the satellite, which was thorough for all UA passengers, I just had to find a chair and wait for boarding to begin.

I found one in front of my plane, N30913 which I already flew on that same flight to IAD a year ago 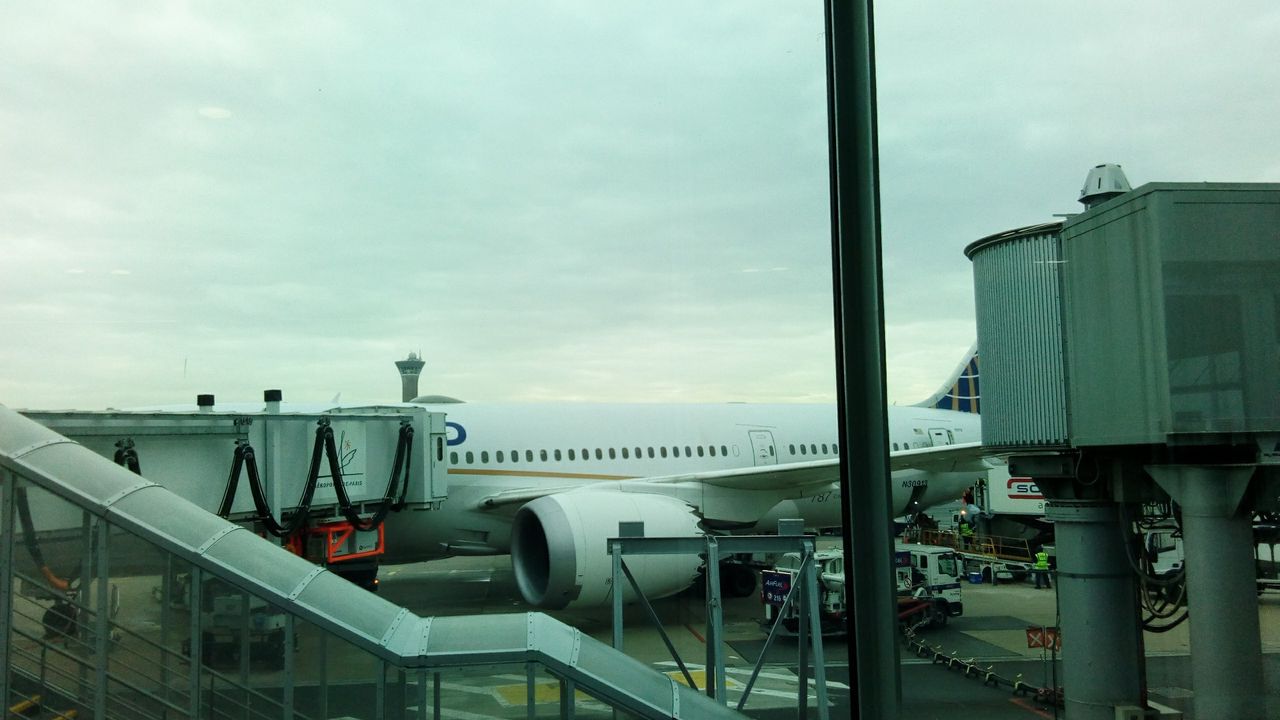 I tried some spotting but the satellites are not really convenient for that, and the only other plane was this CA A330 to PVG. 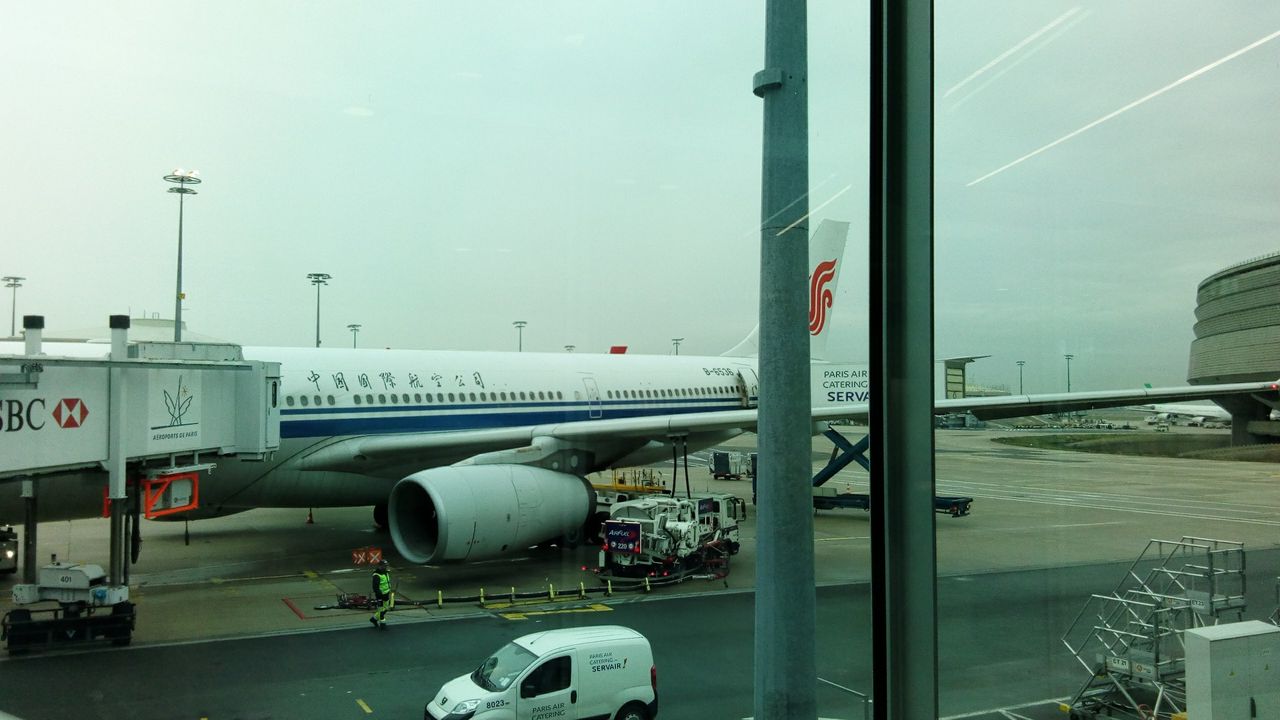 On the right side of the pic you see the main terminal building where you check in, pass immigration and shop before heading to the satellite

Boarding started right one time, for some reason I was in group 3 even though I was sitting in the first Y cabin

I noticed that the seats had been changed to the 2 tone leather ones, also found on the 787/9. I really like how these seats look. 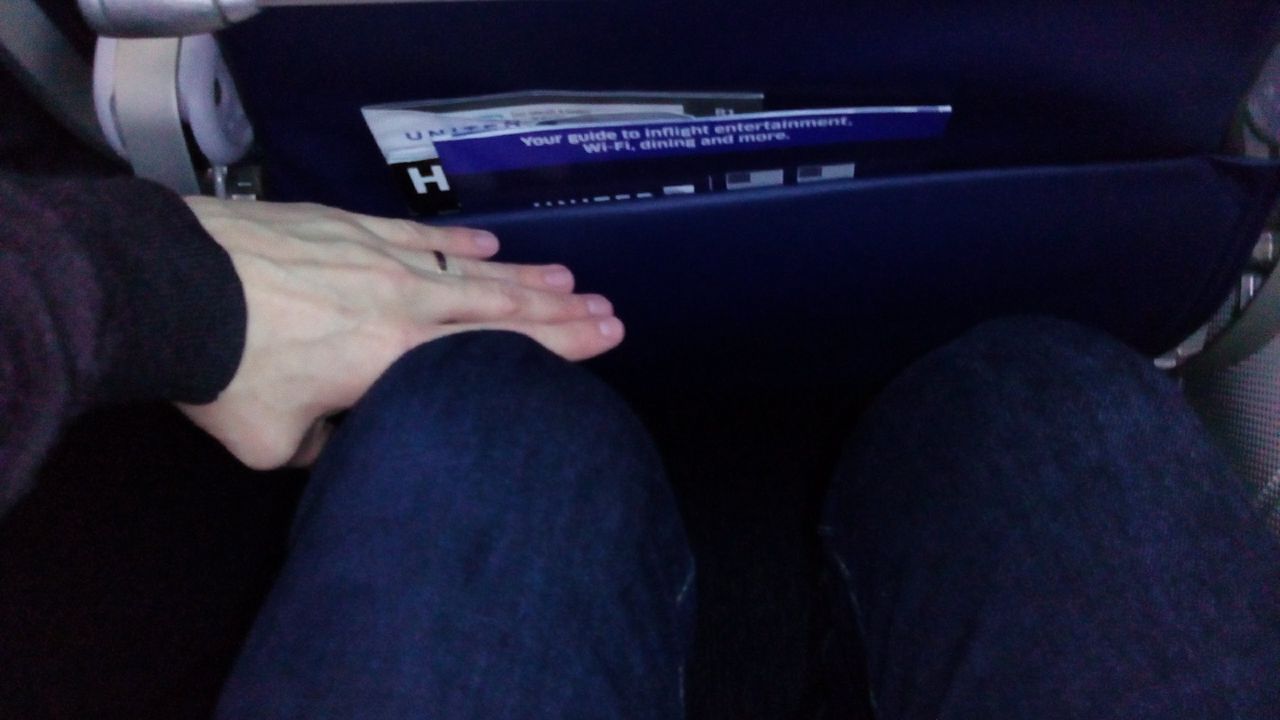 I couldn't take any cabin pictures, as seats around me were already occupied by the time I got on the plane. 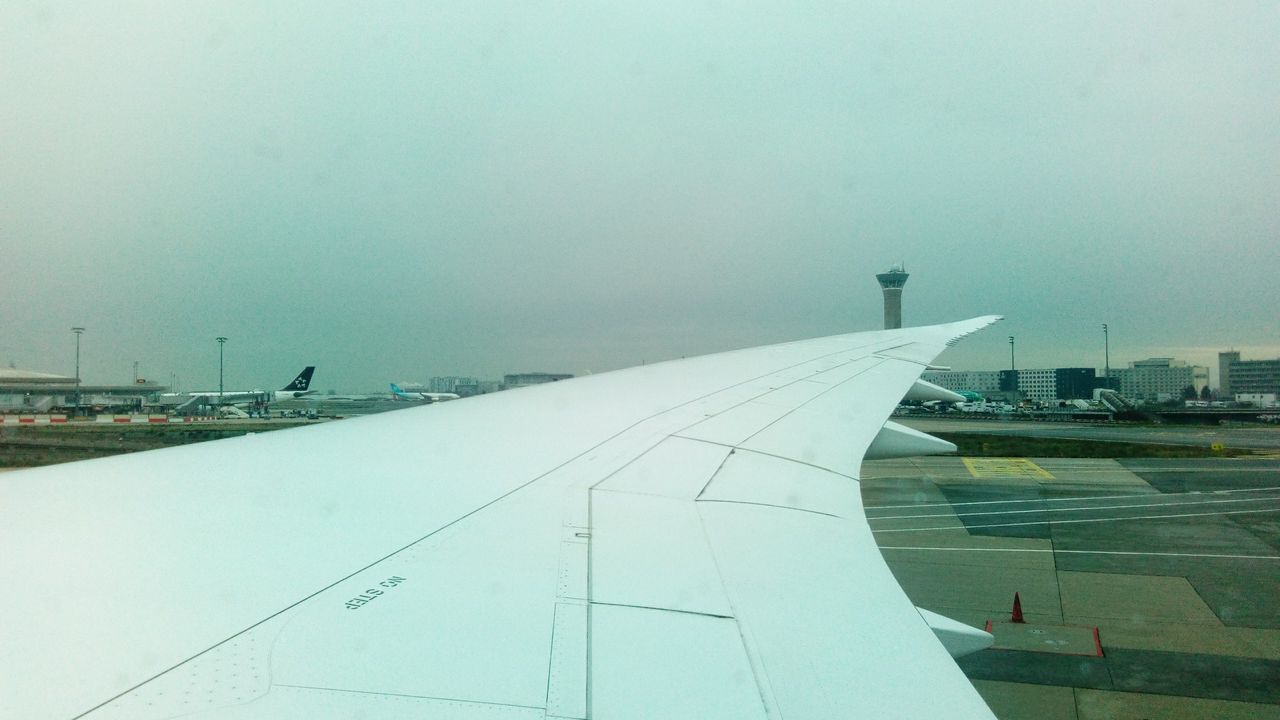 Boarding was completed and I scored an empty middle seat, yay! The safety video was played. At first I liked the concept of showing off some destinations, but after a few UA flights, I find the video too cliché on the desitnations and too "high school musical". 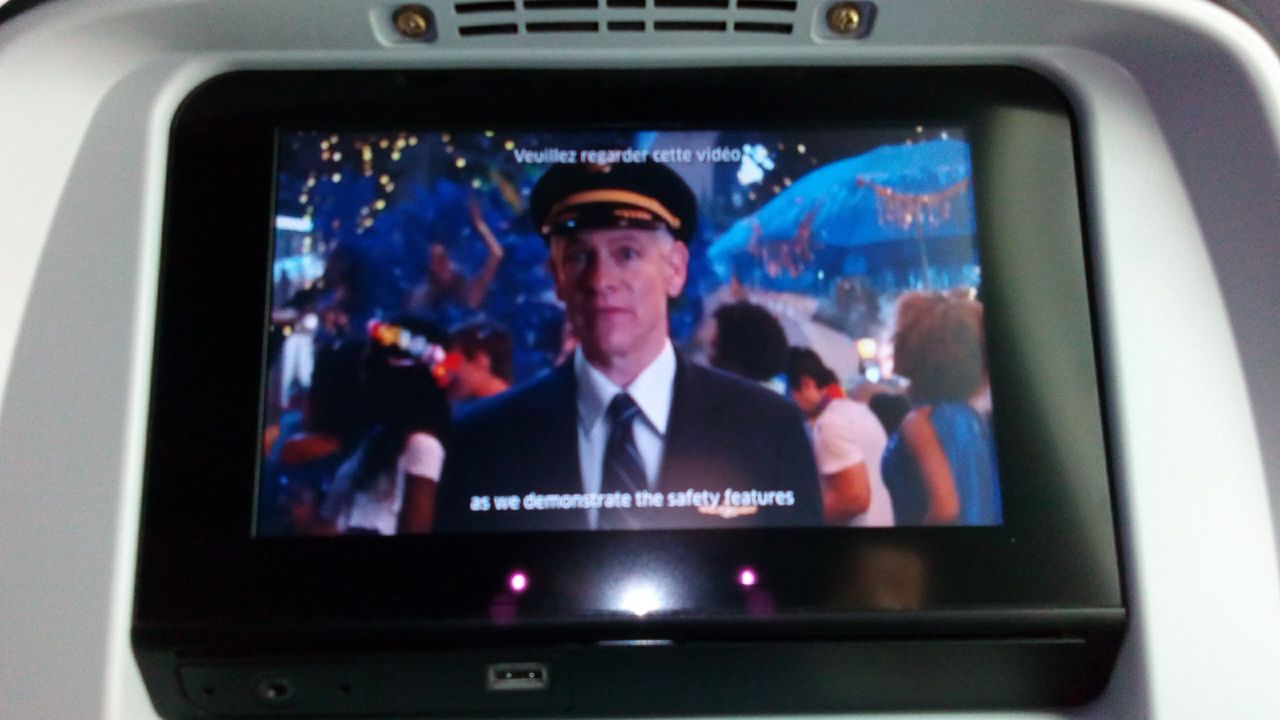 Anyway, we were off to the runway on time, and passed this La Compagnie 757 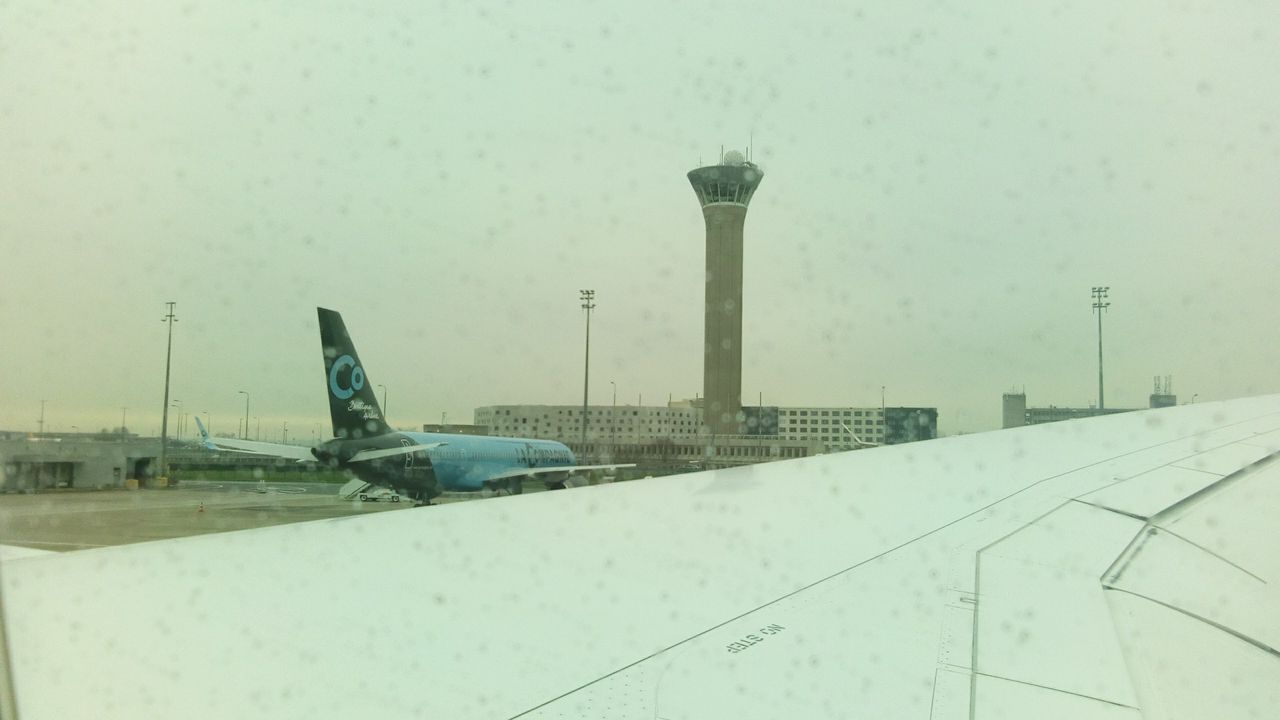 A few minutes later, we took off and left rainy Paris behind 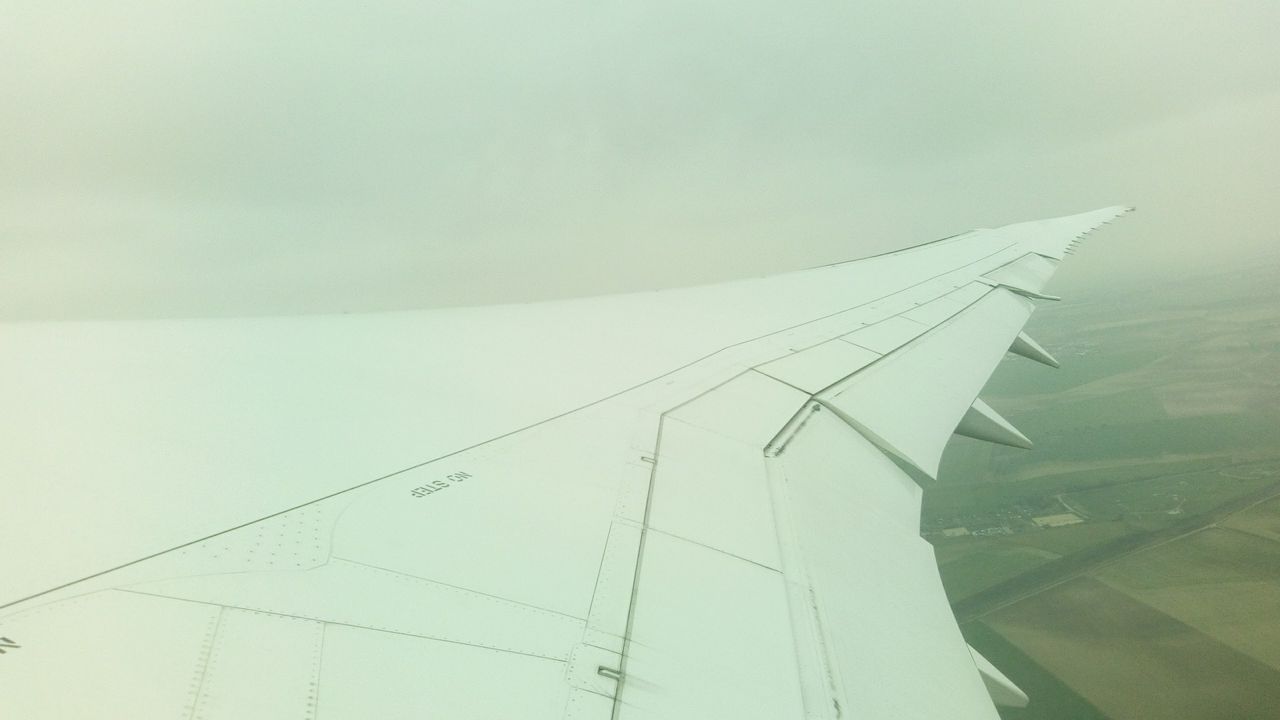 "Hello blue sky! How have you been?" Weather had been especially grey and dull in the past weeks in Paris. 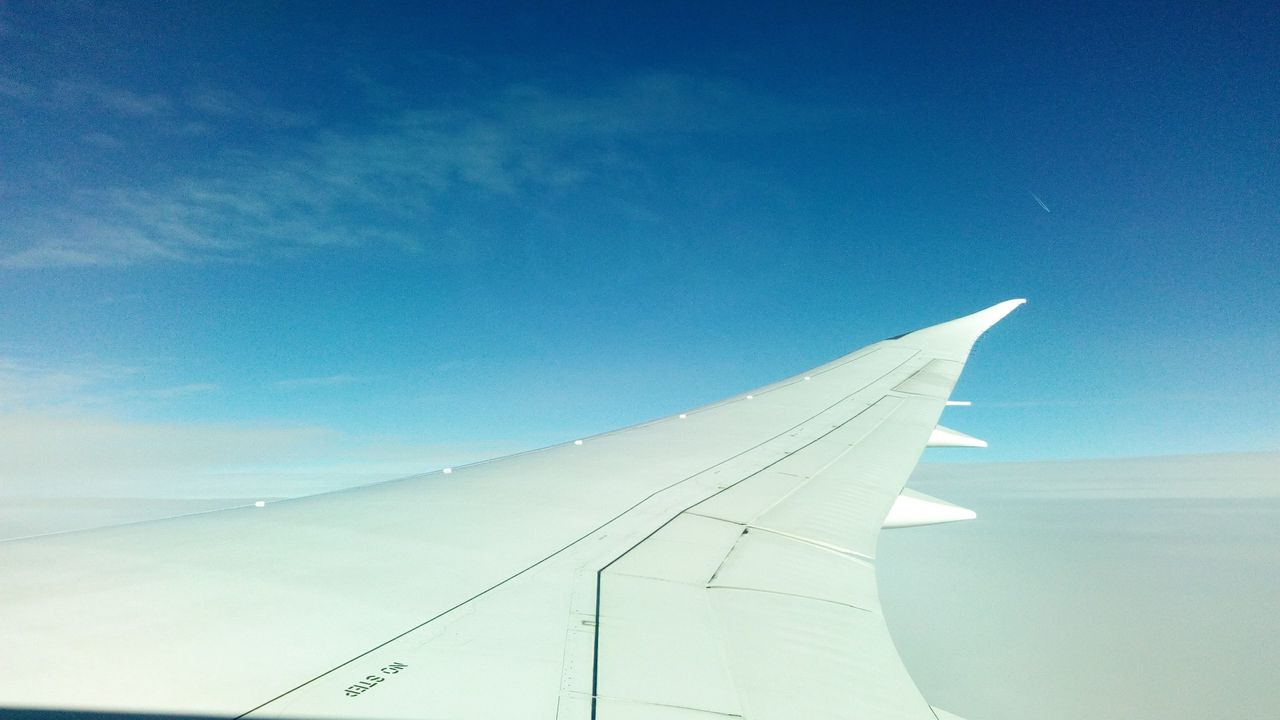 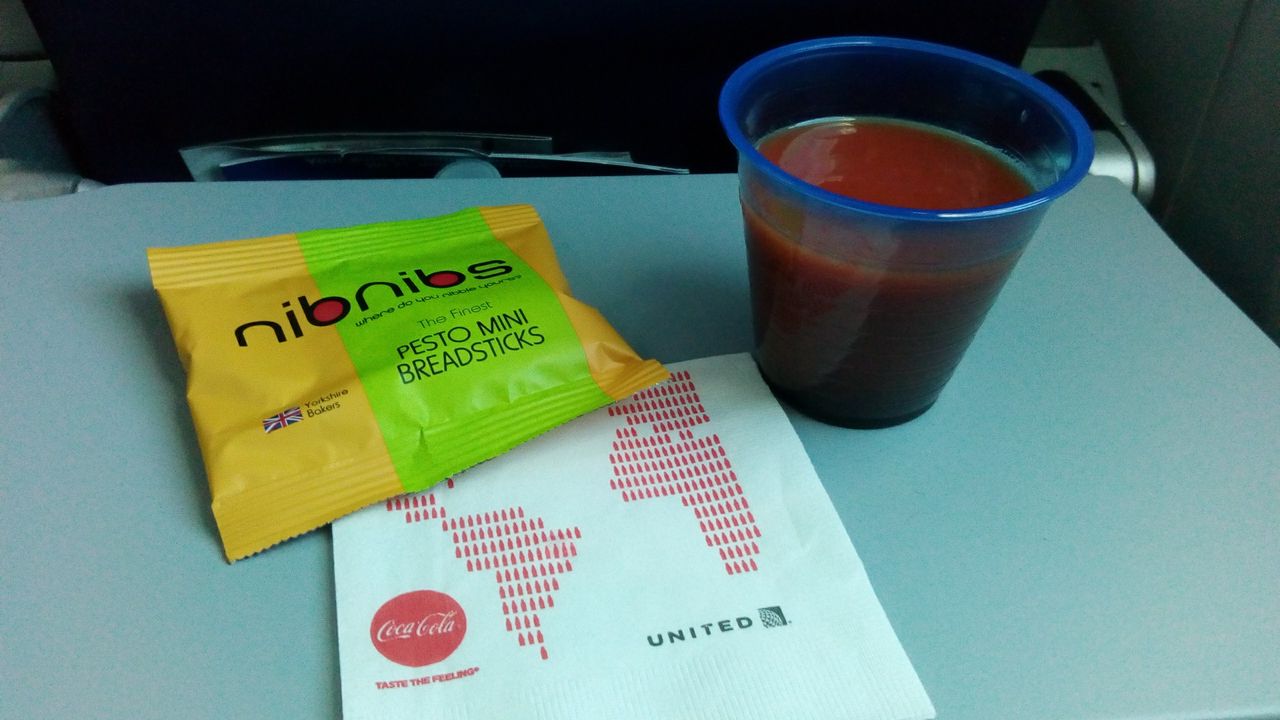 The salty snack was pretty bland and didn't taste like pesto. I prefered the pretzels served on the way back to CDG.

Lovely view as we were flying over the UK 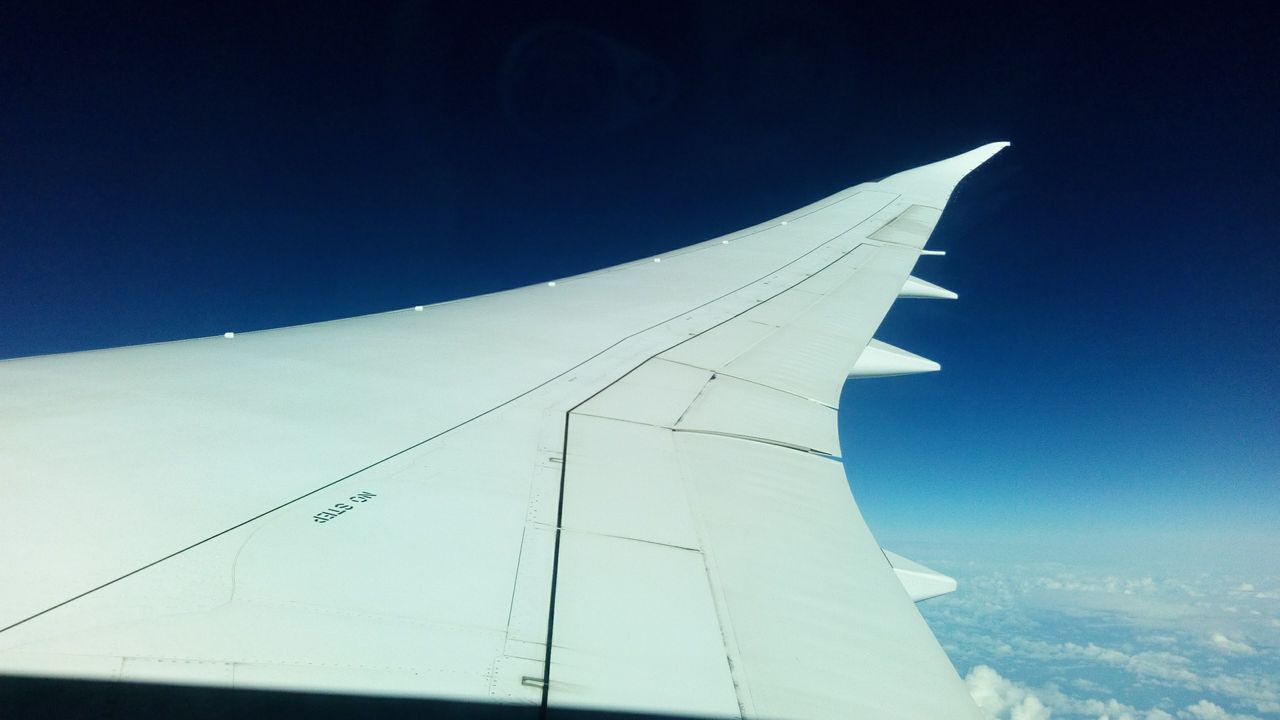 Lunch was served about an hour after take off, choices were chicken, pasta or indian vegetarian, which is always yummy on UA, so again I went for the latter.
I asked for white wine and ginger ale to go with my meal. 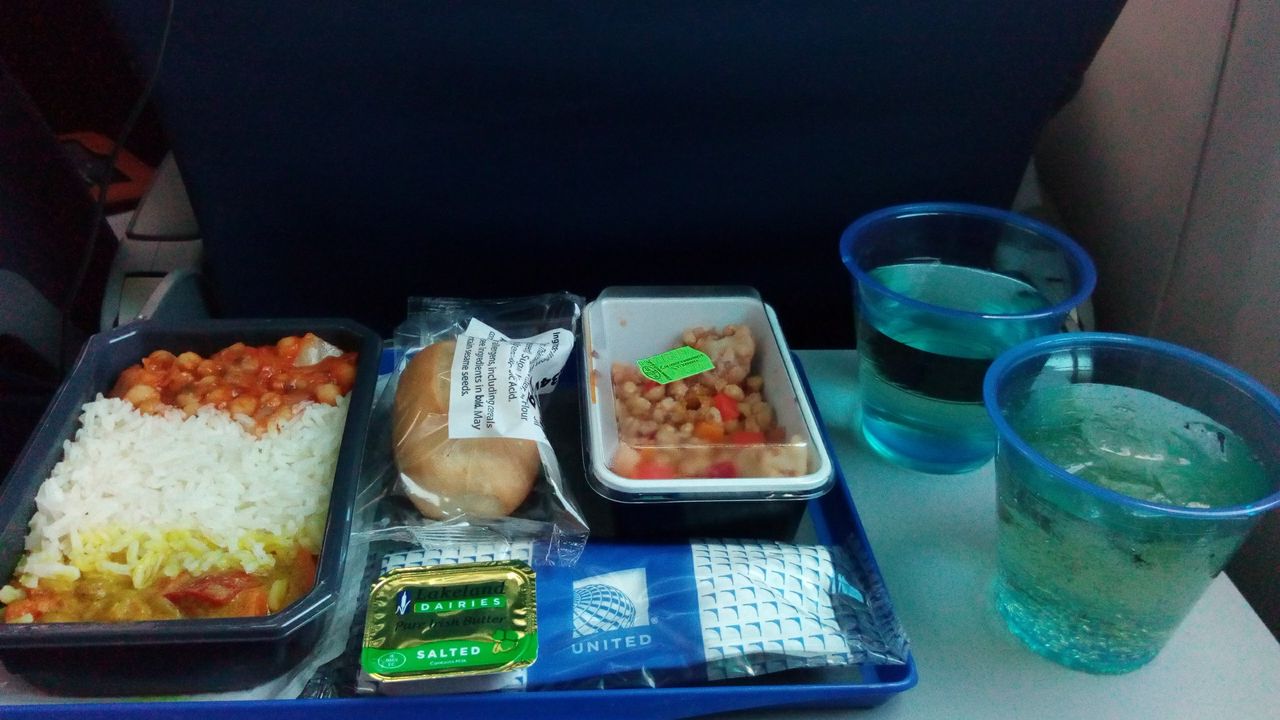 The salad was okay but the entree was really good and spicy, I definitely recommand that option!

As I was still hungry, I asked the FA picking up the trays if there were any leftover entrees and a few minutes later I was offered with the pasta version: spinach manicotti. 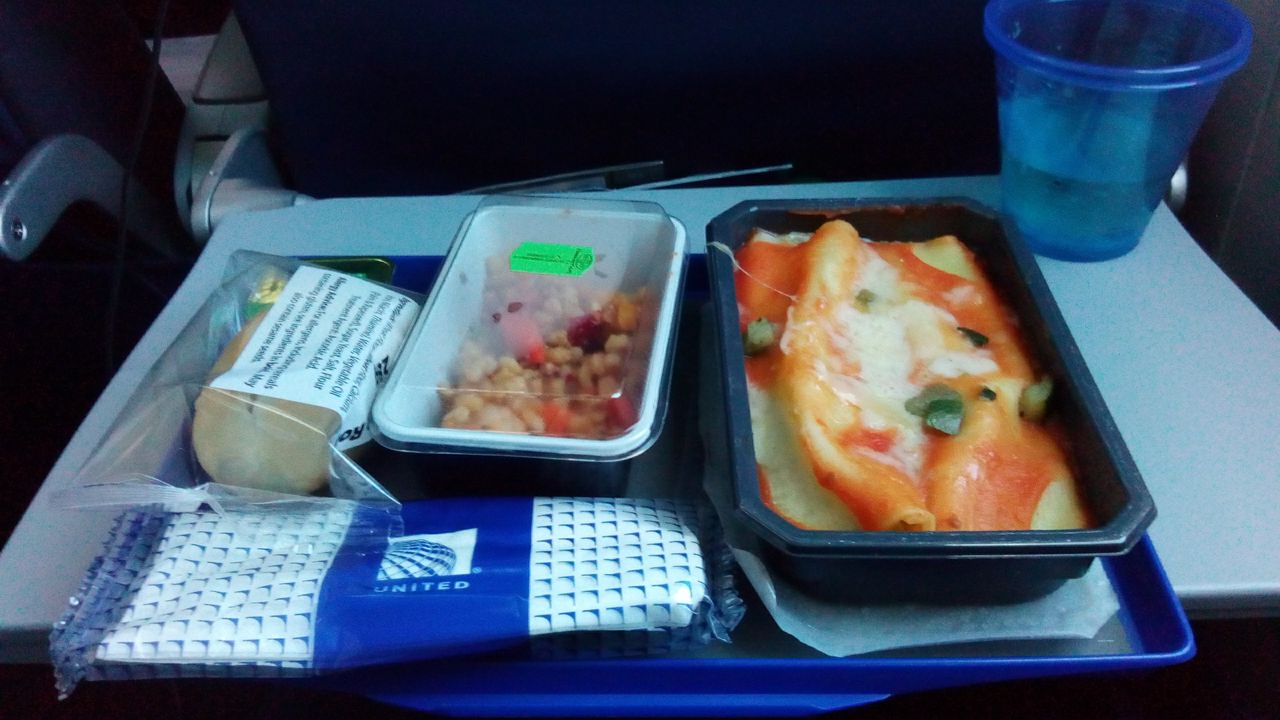 I'm not a fan of spinach but it was pretty good.

I find UA meals pretty good, and the entrees are actually better than on DL, the only problem is the presentation of the meals.
The cheap mini plastic tray really makes you think you're served a bad quality meal when it's not the case.

A tasty Ice Cream was then distributed along with more drinks, and another ginger ale for me (and I got the whole can!) 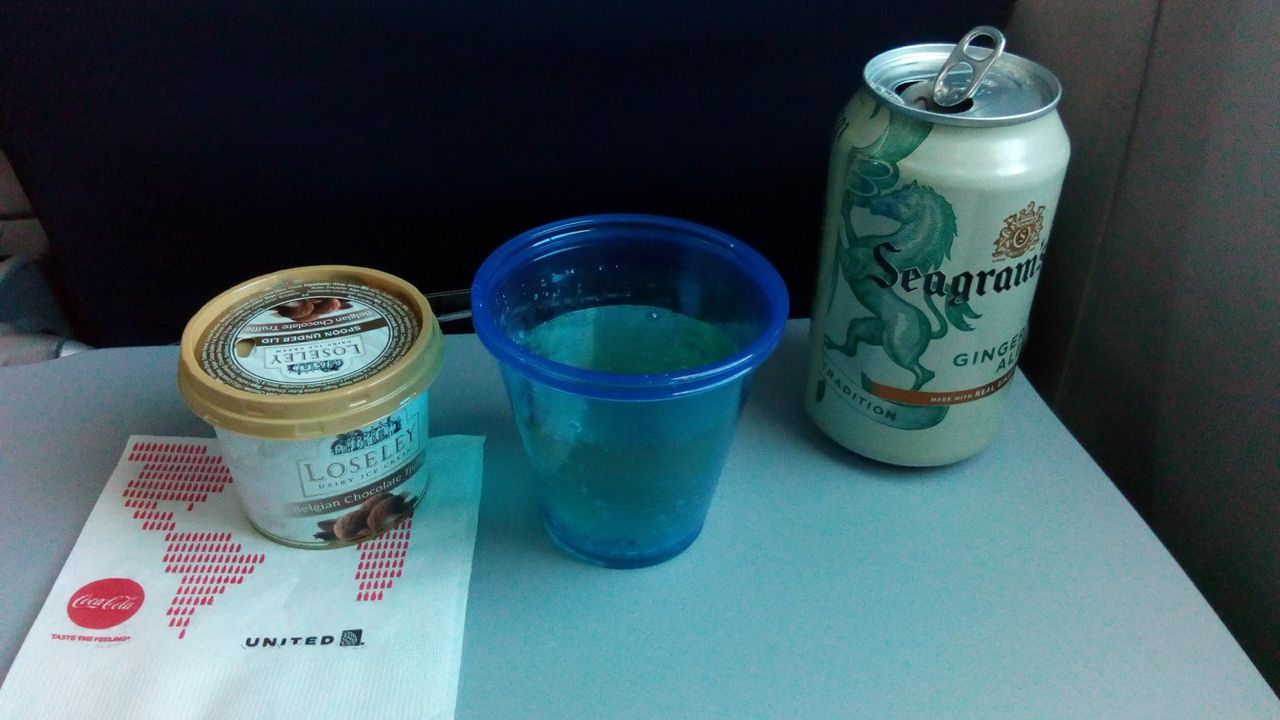 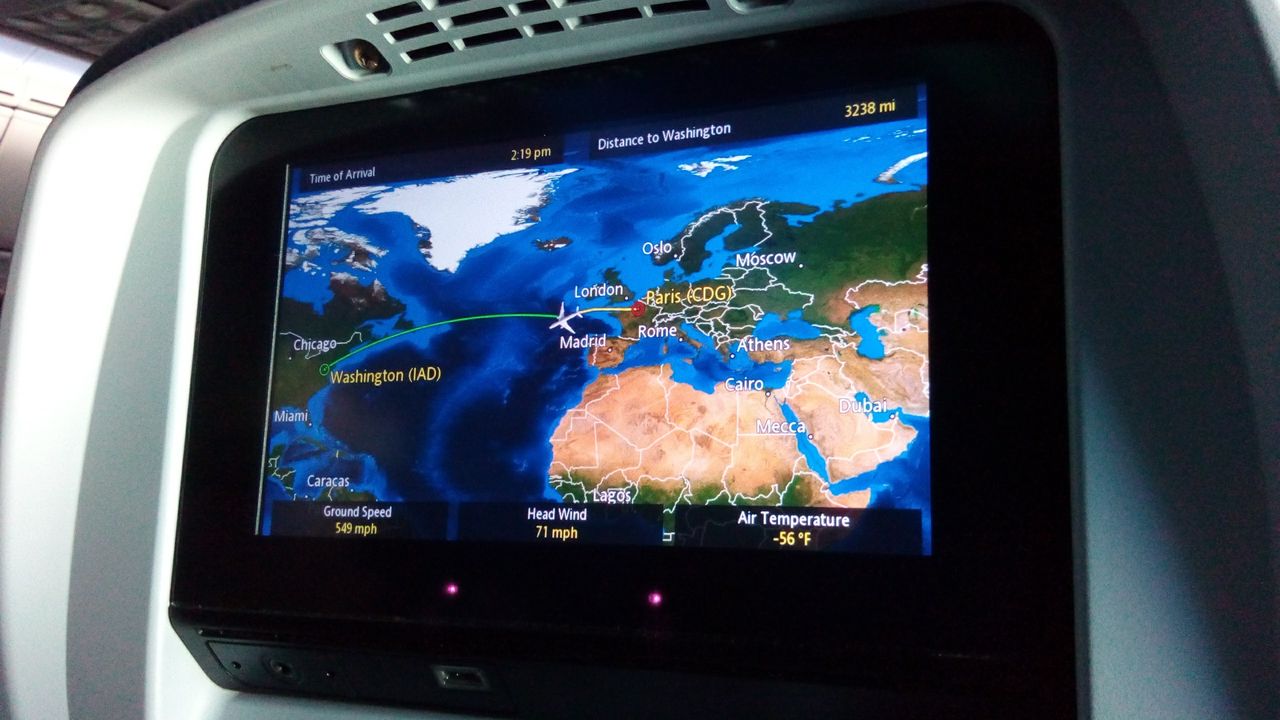 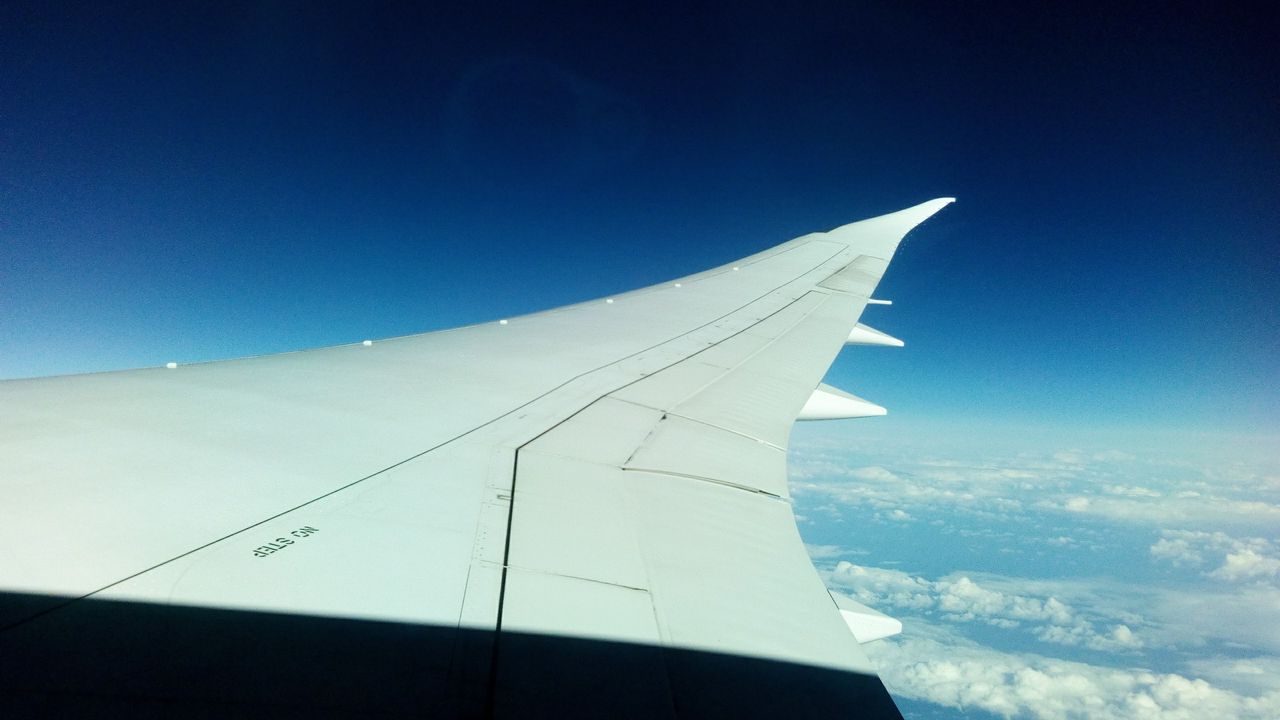 The windows were darkened (but not blocked) by the crew 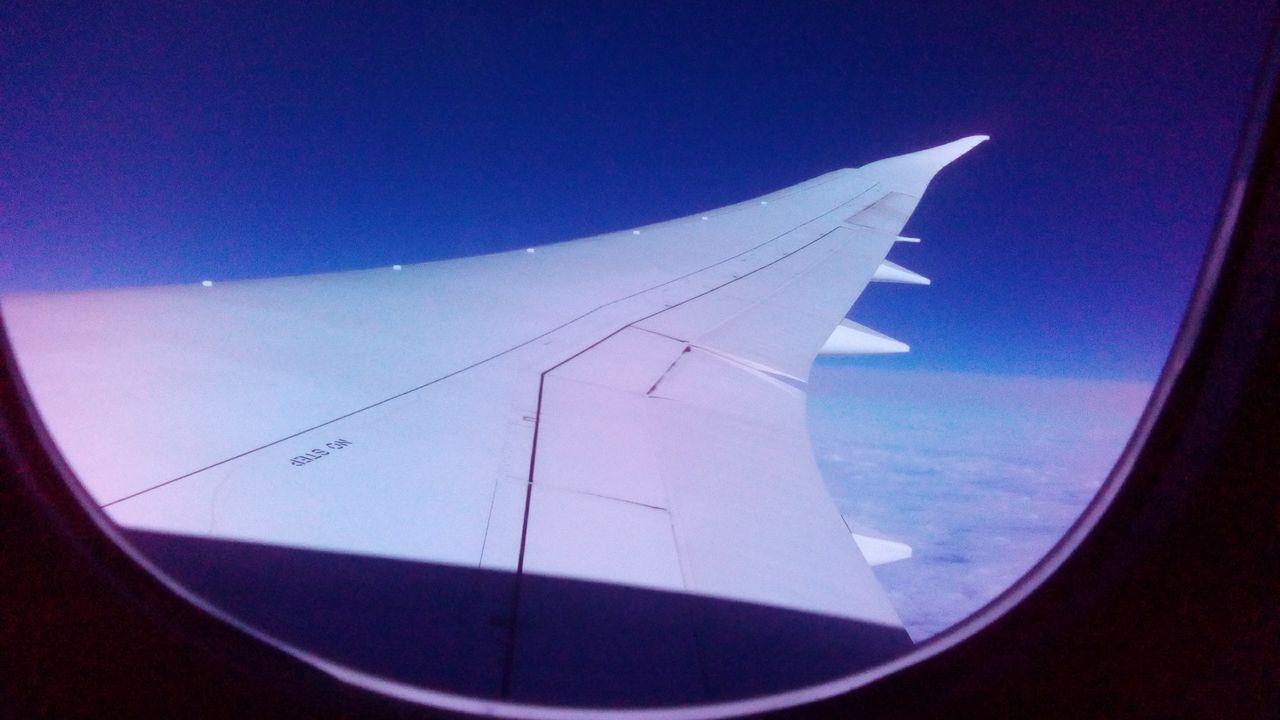 Time to talk about the crew: they were globally friendly for US airlines standards, they did a few rounds of water during the flight and they didn't look like they wanted to be somewhere else than on that plane.

After 2 movies that were so-so, we finally reached the North American continent near Boston.
We really took a southern route today. 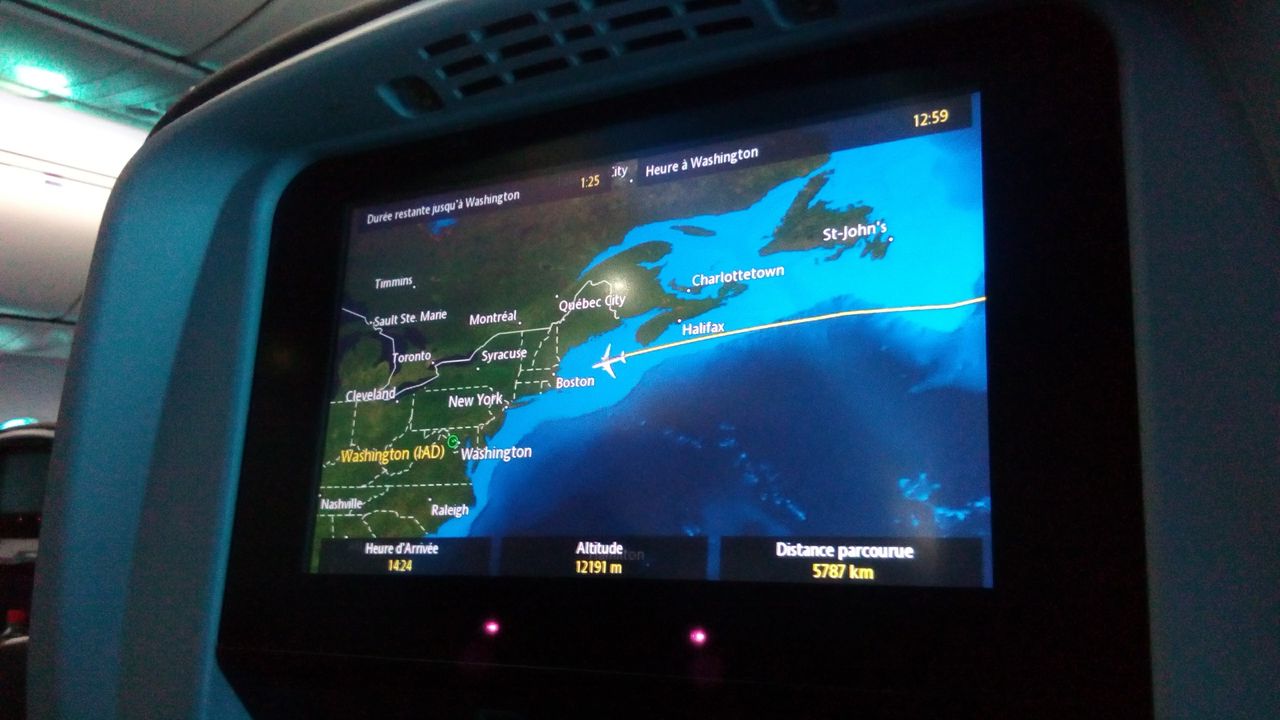 The pre-arrival snack was served. A turkey and cheese sandwich with my choice of coffee 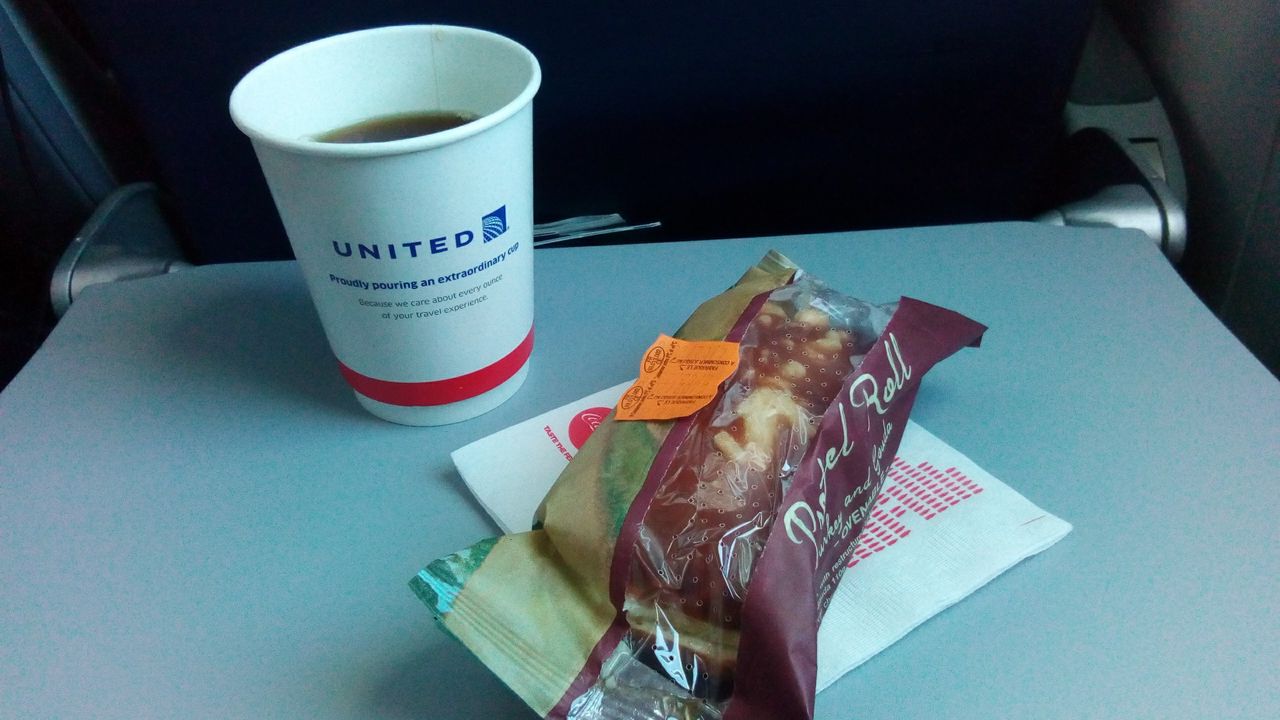 Well the sandwich tasted good, but no choice was offered (it used to be turkey and cheese or just cheese) and it is still too small for a 8h30 minute flight, especially as there is no snack available in the galley between meals.
I had had two lunches so it was okay, but otherwise I would have been hungry upon landing,

Snowy landscapes between Boston and NYC 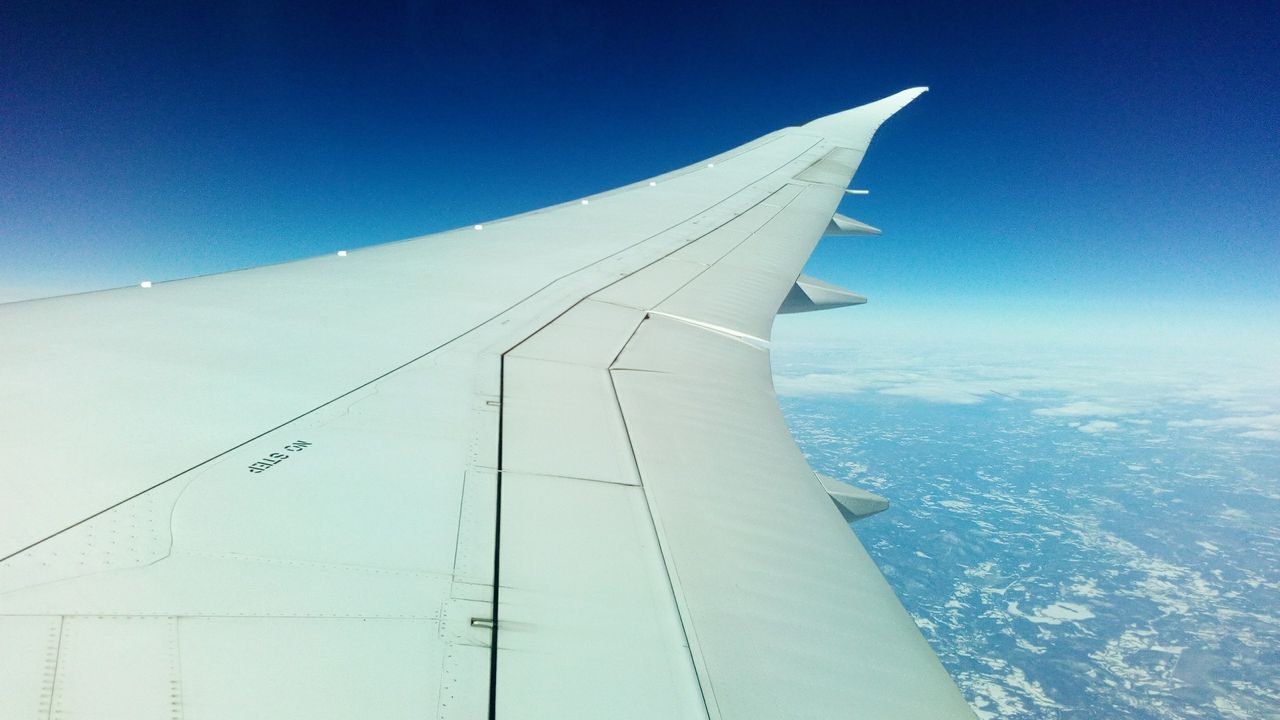 And not snowy at all as we neared D.C, bummer I would have loved to see the city under the snow 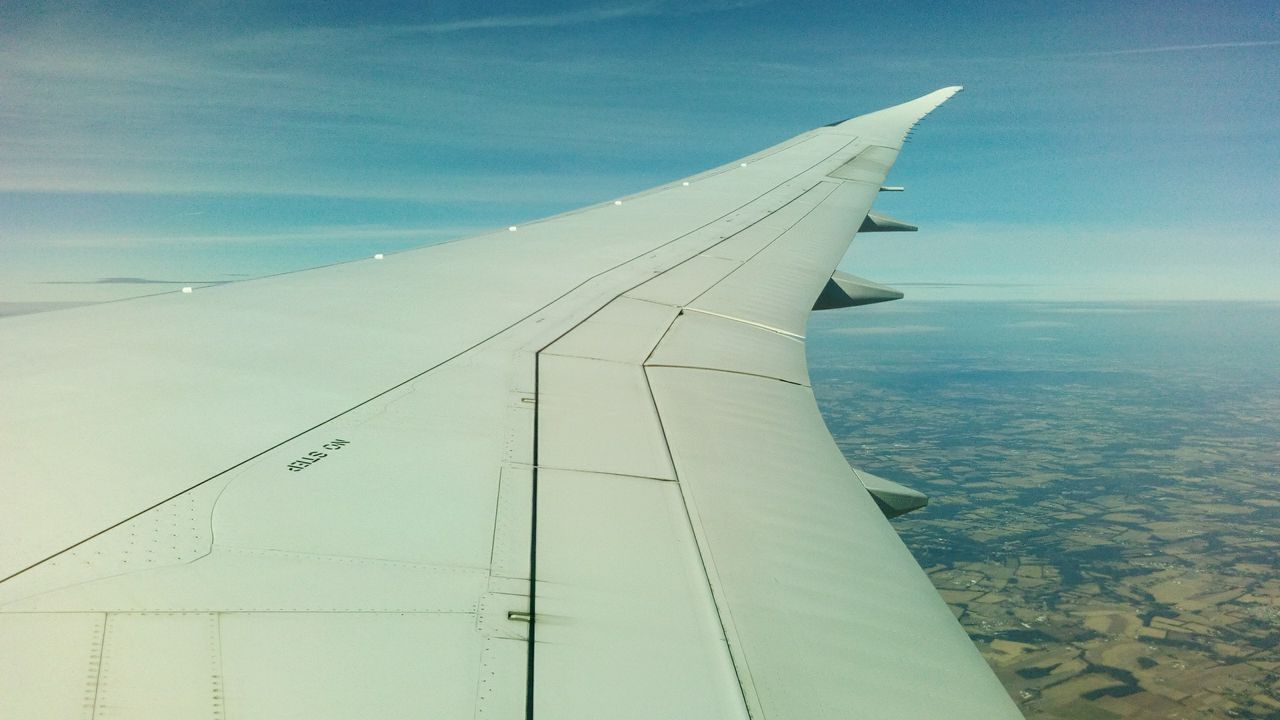 Final approach into Dulles, we landed from the east and thus didn't get to fly over the airport before landing, which I love. 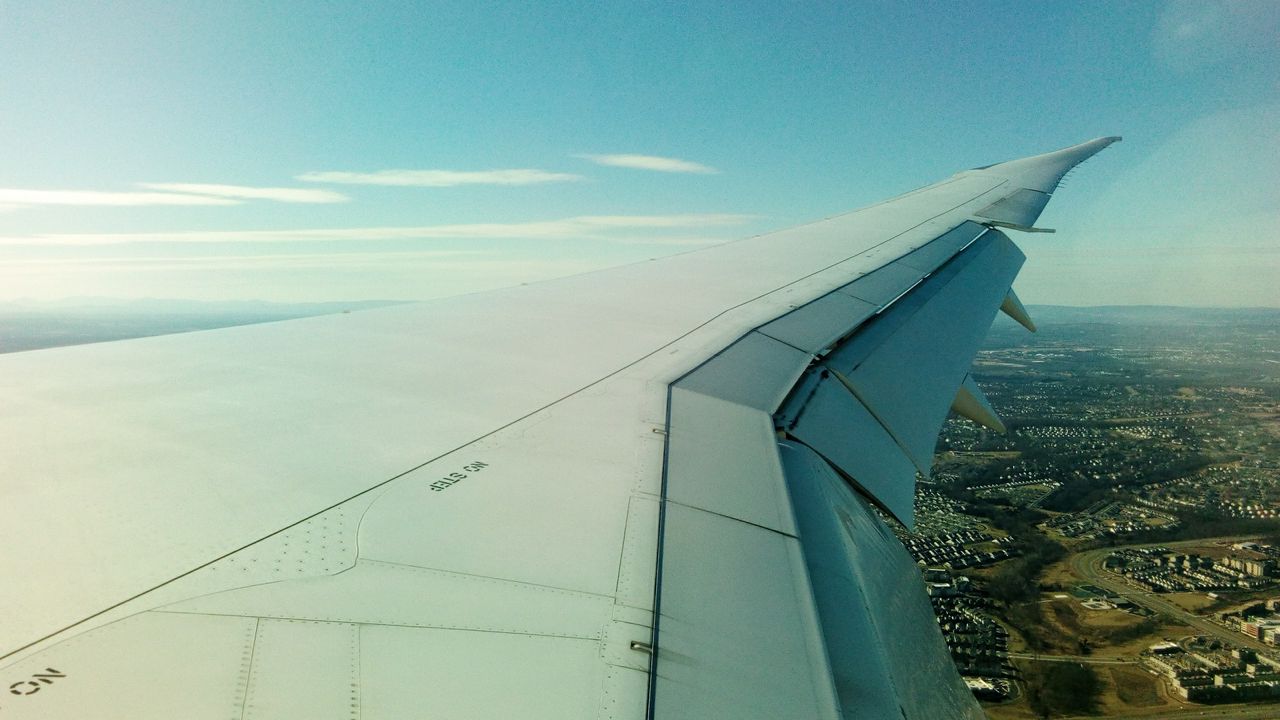 And touchdown, 15 minutes ahead of schedule. I love how the 787 wing literally changes shape during landing with the flaps, airbrakes and ailerons out. 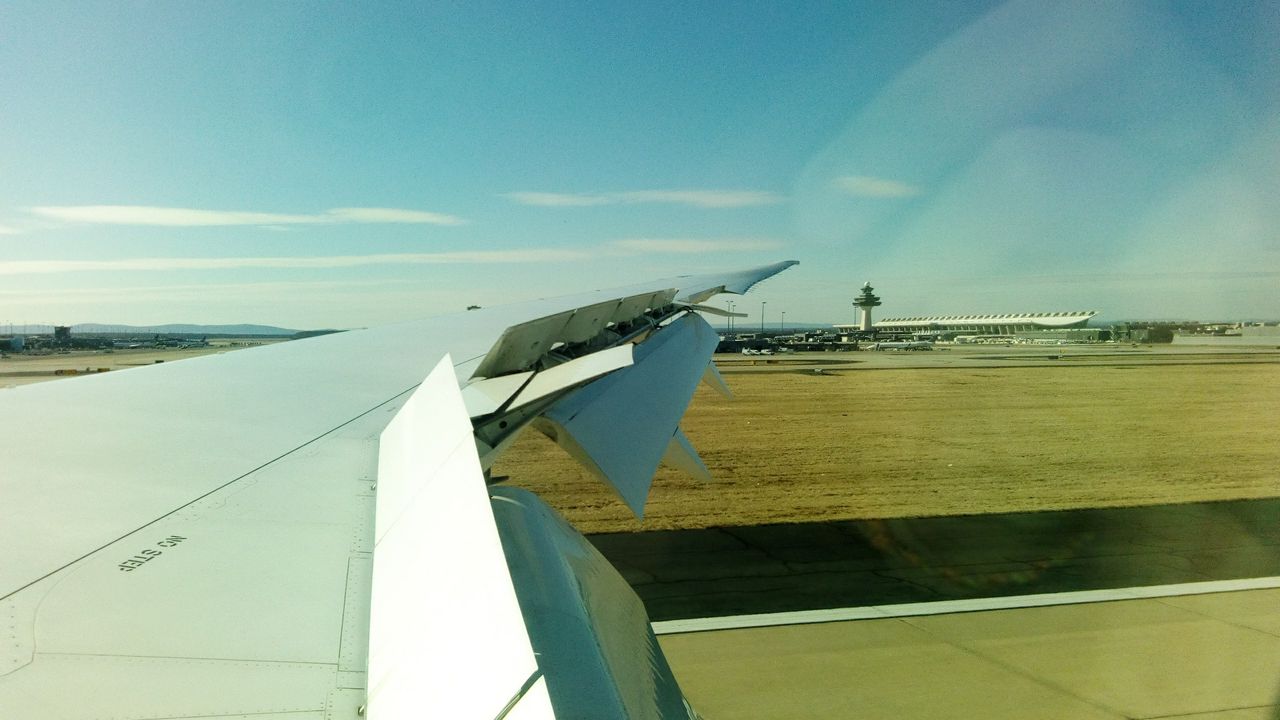 We parked at the gate about 10 minutes before our arrival time, and more importantly before most other arrivals from Europe.
After getting on that people mover to the main terminal, I passed immigration in less than 5 minutes (that returning ESTA system is a blessing).
30 minutes after exiting the plane I was meeting with my friends at the curb.

Thanks for reading !
See more

A good flight with UA.

Though the catering is badly presented and the pre arrival snack is not sufficient, I still feel that it tastes better than DL's.
Crew was pretty good, if they were on a european airline I would have given a 7, but with US standards and in Enconomy they deserve an 8.
I really liked that cabin, the seat is indeed quite firm but you really have room for your legs.
Only the IFE was disappointing to me, there was some choice but not many to my liking, and no music at all.

The contributors of Flight-Report published 40 reviews of 2 airlines on the route Paris (CDG) → Washington (IAD).

The average flight time is 8 hours and 22 minutes.