I was travelling to Sydney. Since I wasn't able to get a seat on Sydney bound flight, I flew to Melbourne. The choice of airlines were Qantas, jetstar Airways or Virgin Blue Airlines.

Virgin Blue Airlines was formed as a Low Cost Carrier year before collapse of Ansett Airlines. Virgin Australia was a trading name of another business in Melbourne.

Being one of the busiest air-routes in the world, I knew getting a flight wasn't going to be difficult, Decision was save time or money.

I had ruled out Qantas / Jetstar as the fares quoted were too high in $300~450. I checked with Virgin Blue counter. Early departure flights were very expensive,

I was quoted single ticket price of $250 for a 2 p.m departure. I could have waited for cheaper flight in the evening but being sick and tired, the thought of dragging the luggage around. I decided to go ahead and book the flight.

I accepted the price and got my booking confirmation. As I had a check-in bag, had to pay extra for luggage.

I dropped my luggage at check-in counter for the flight. Queue wasn't long at the check-in as DJ catered to leisure travellers. 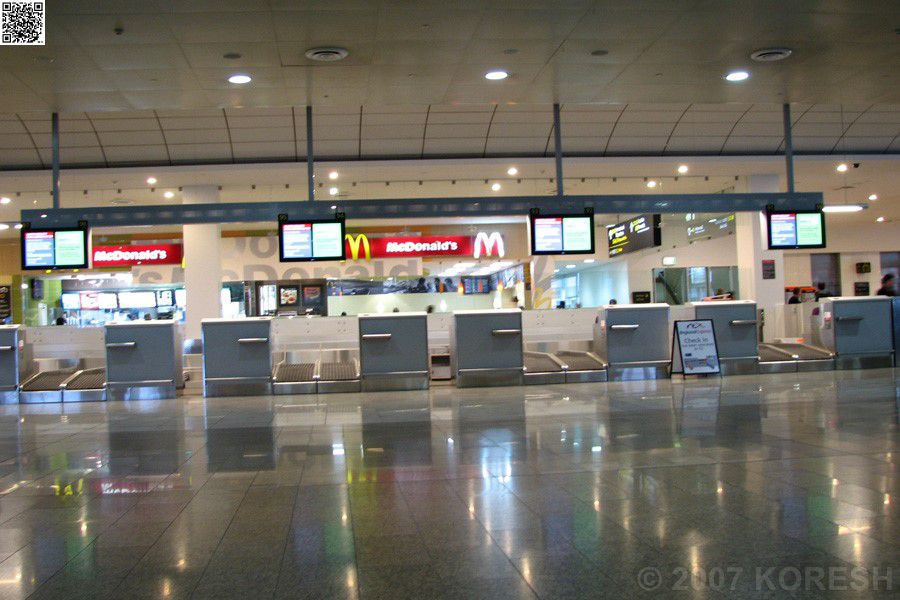 Being mid-day, not many passengers flying domestically with check-in bags. 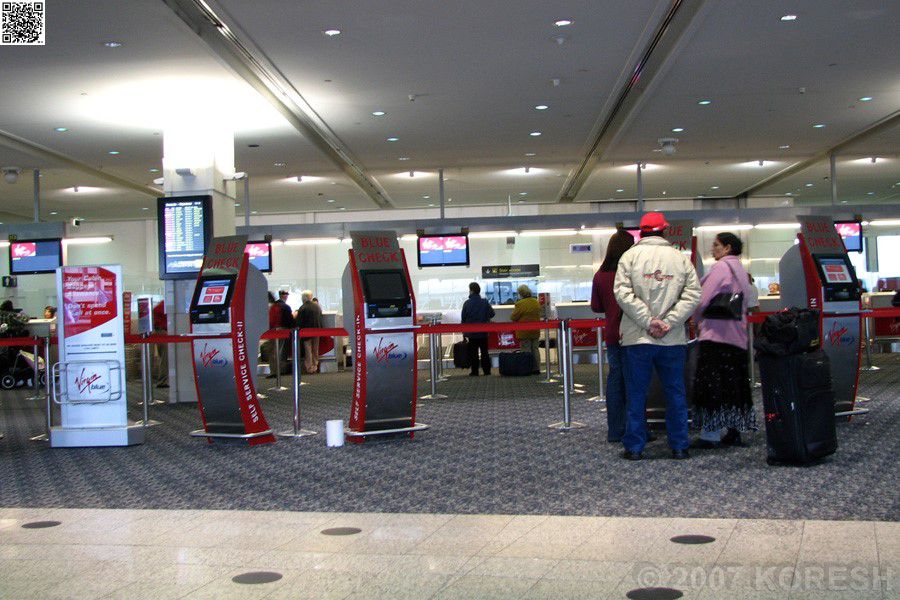 Most were carrying carry-on's and checked in through self-service kiosk. 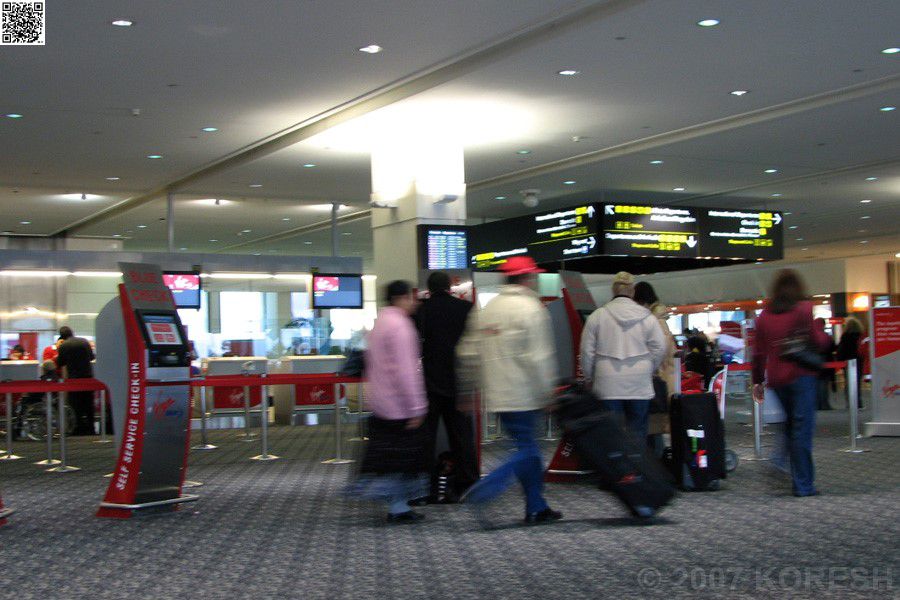 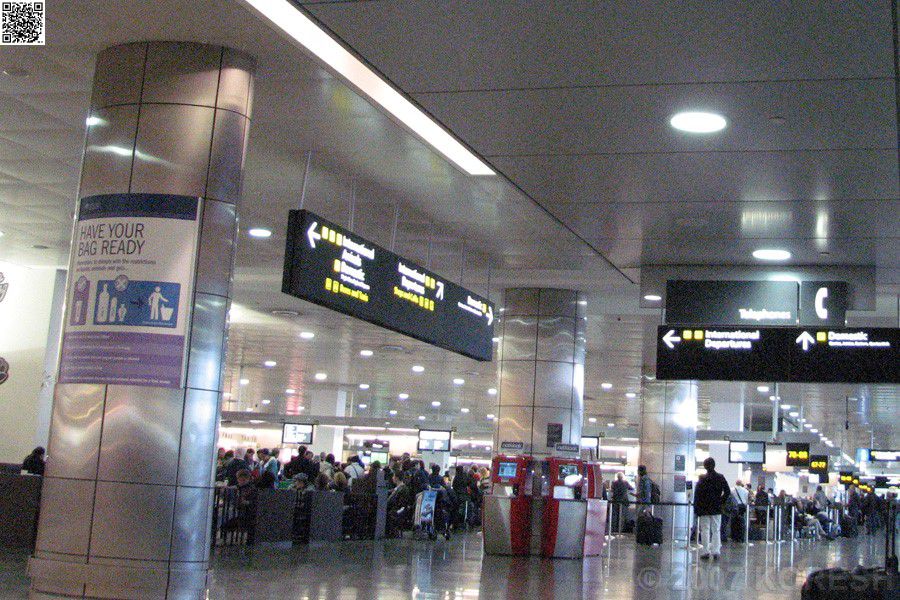 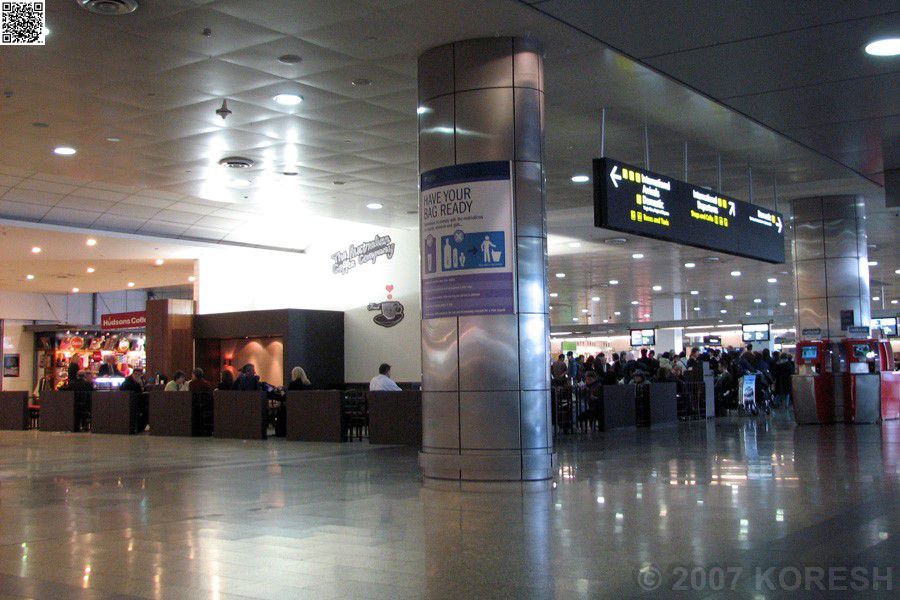 After sorting the ticket, I still had about 3 hrs before flight I went to McD for meal. While having breakfast, had view of the air-side action. 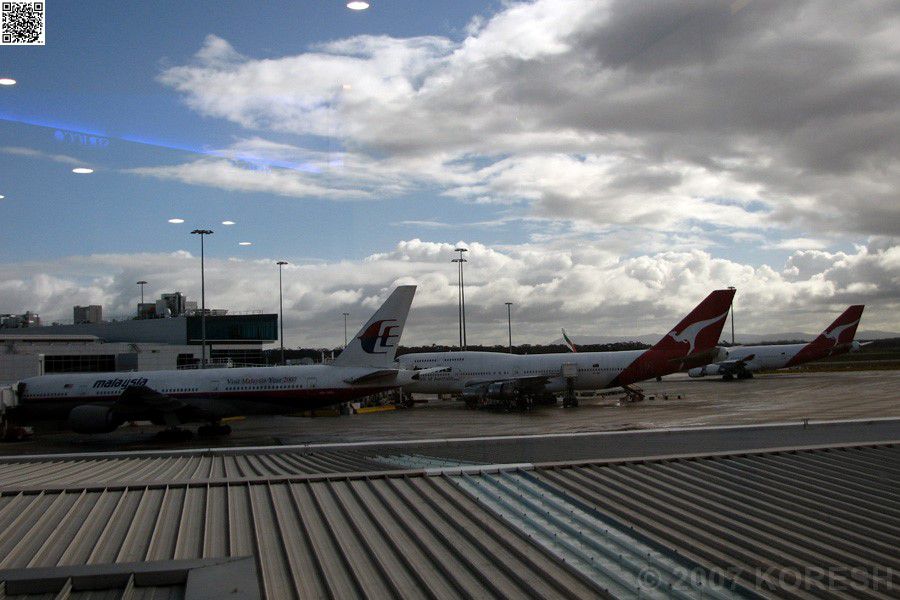 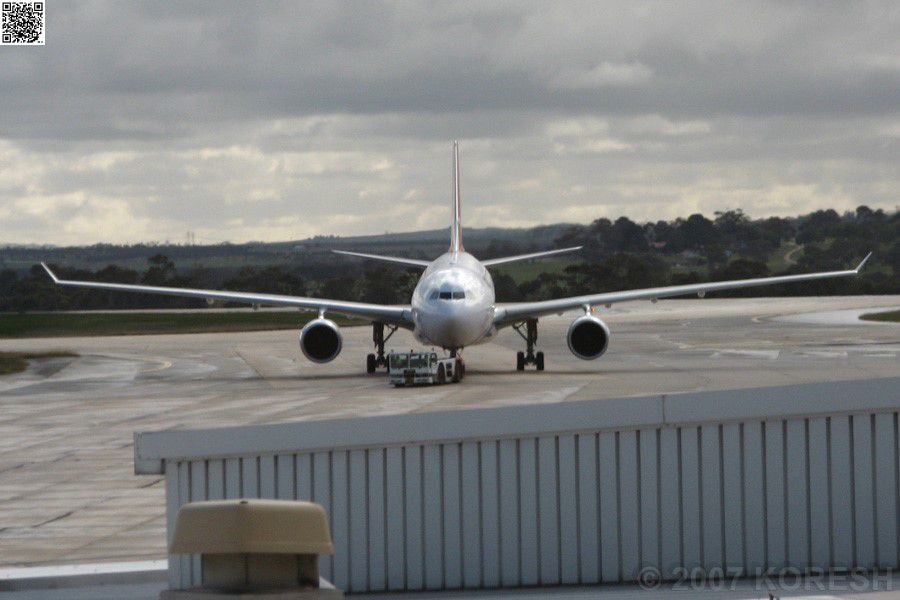 With time to spare after meal, did some plane-spotting. 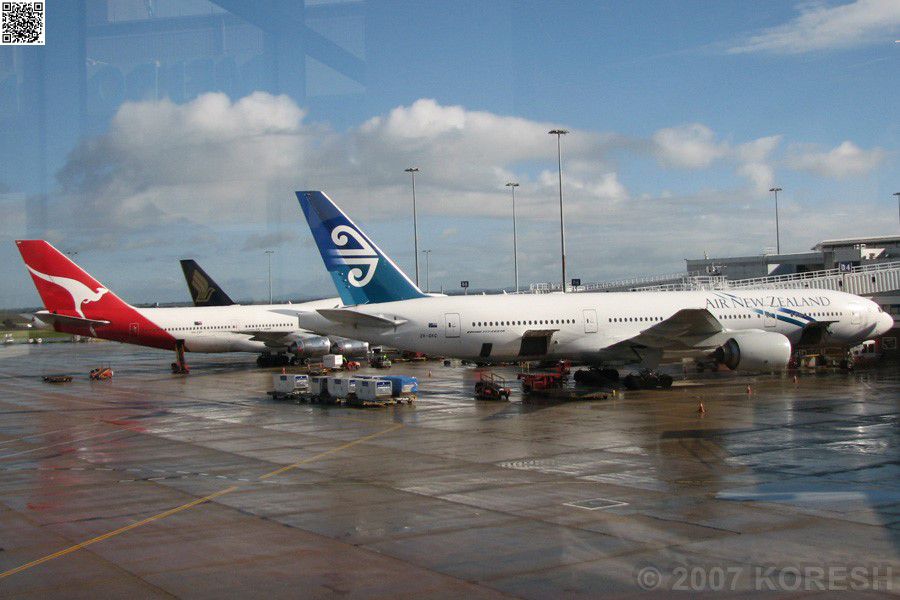 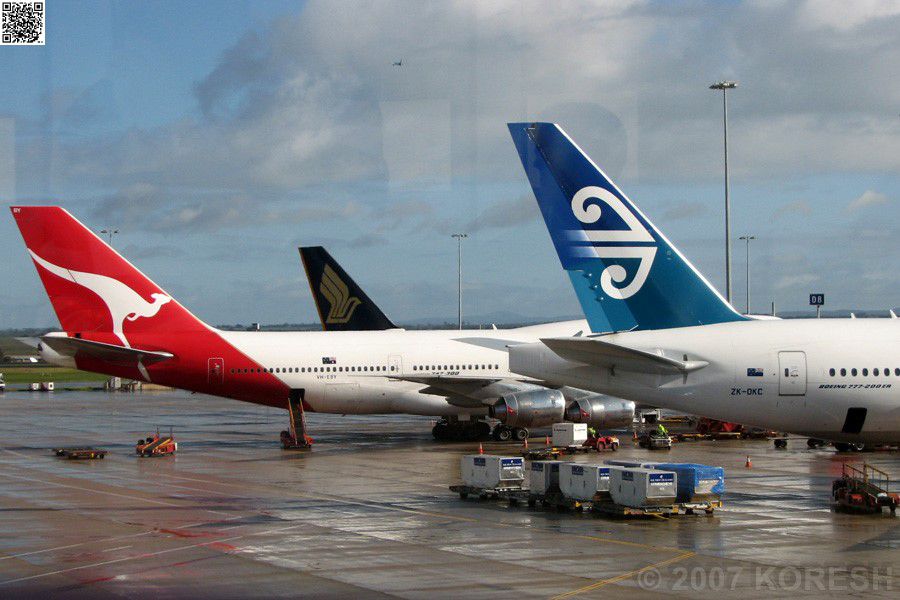 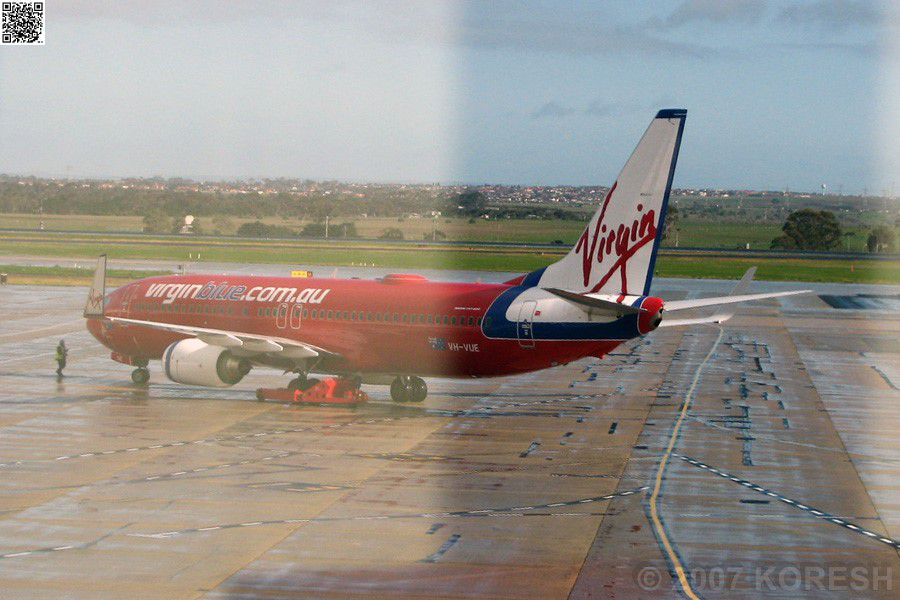 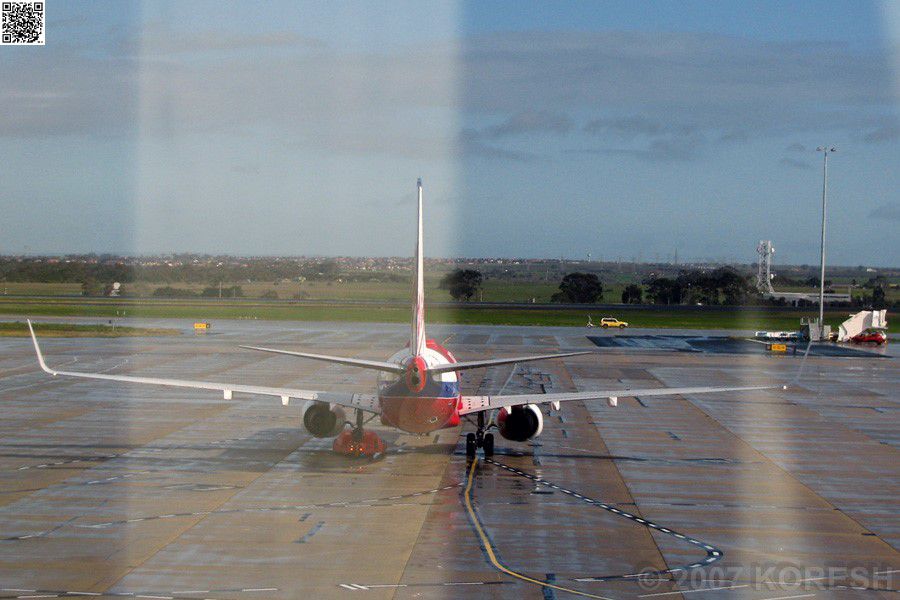 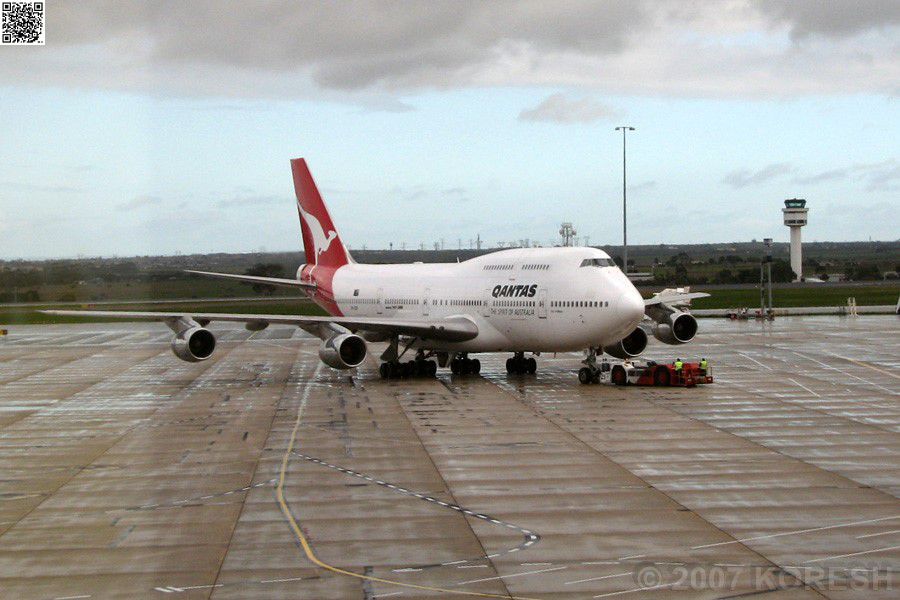 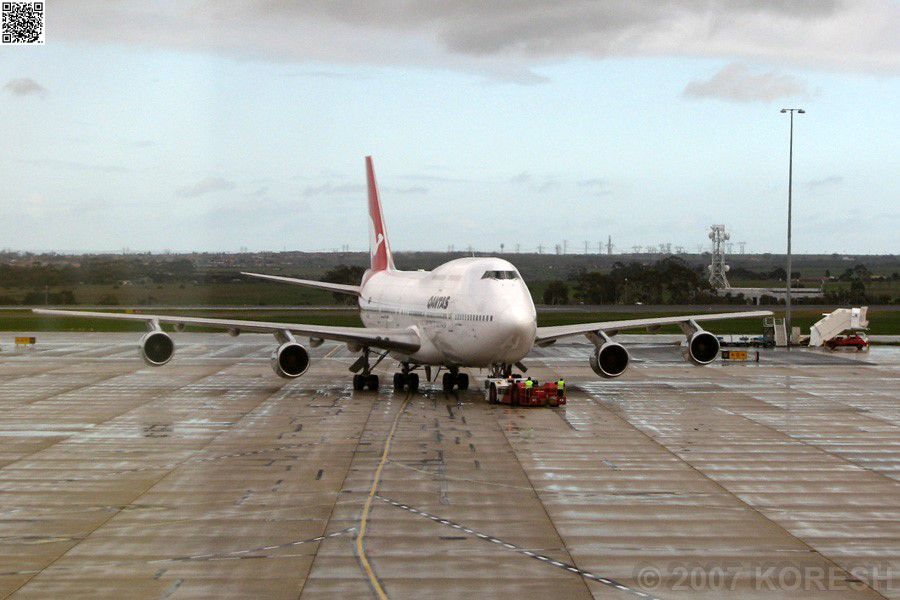 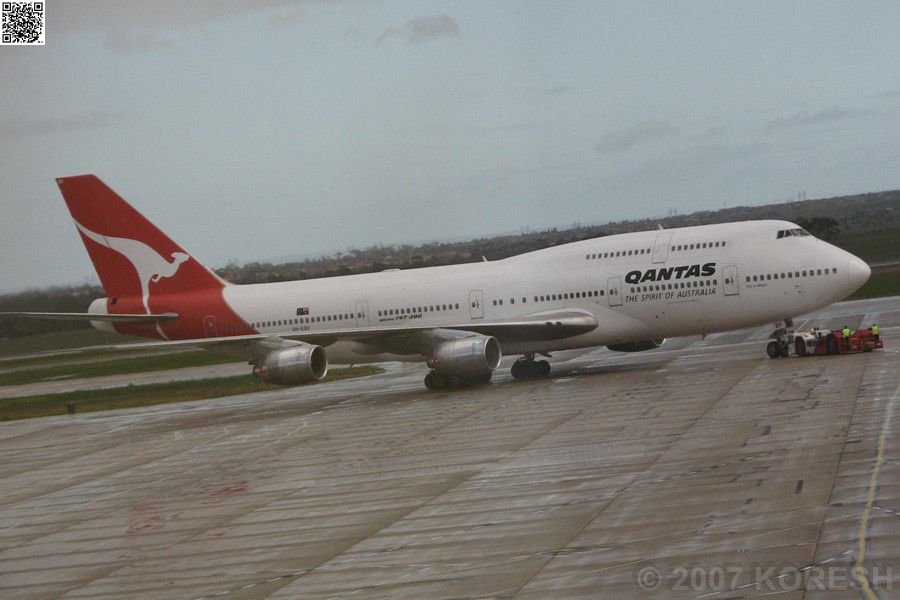 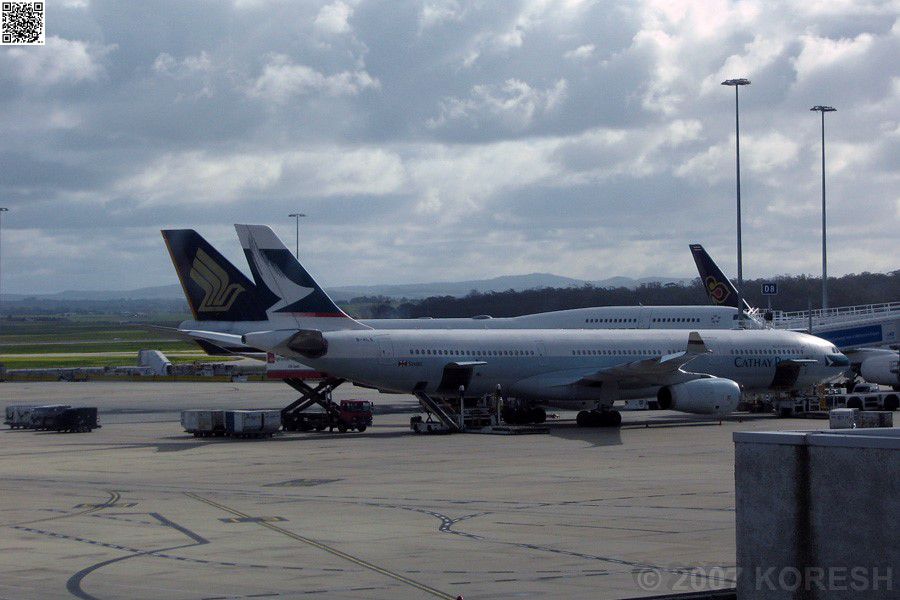 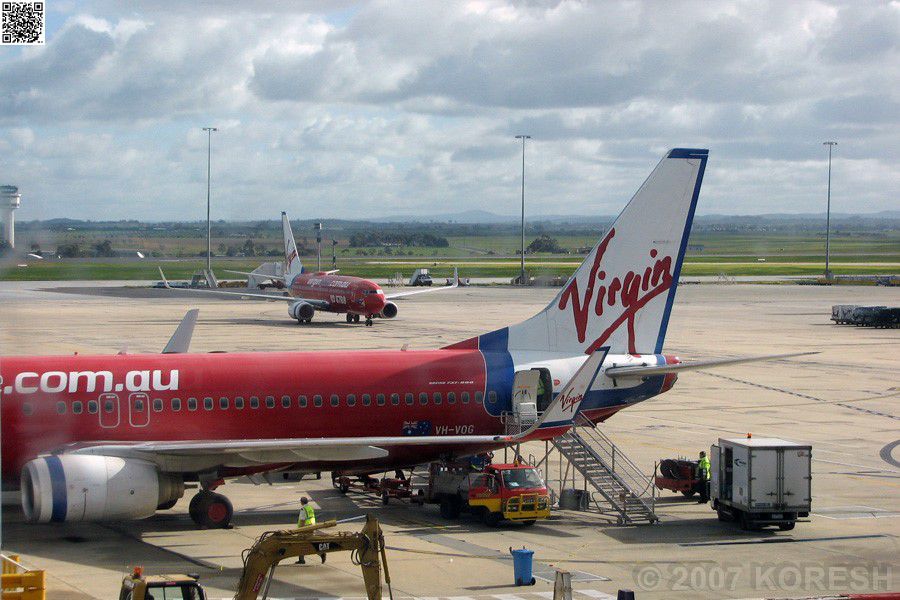 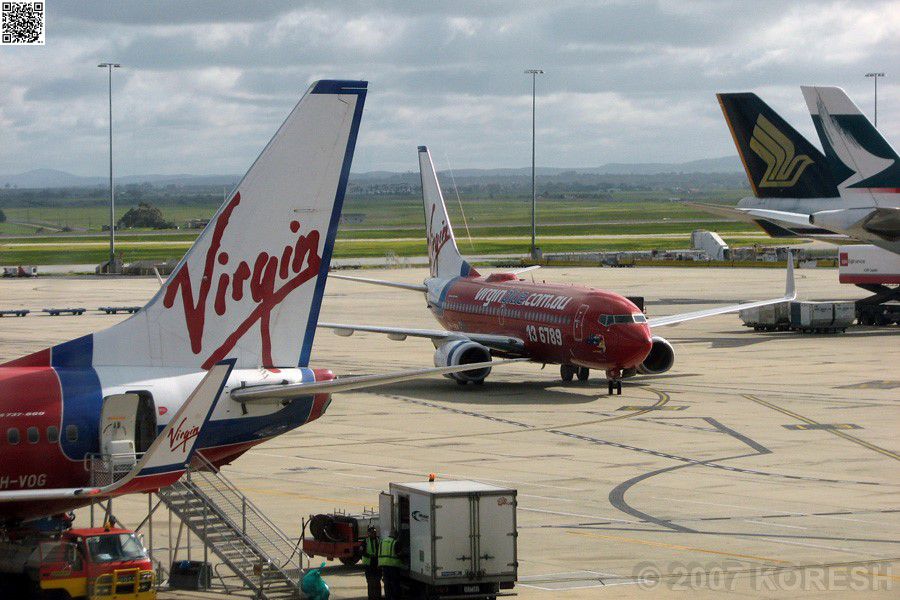 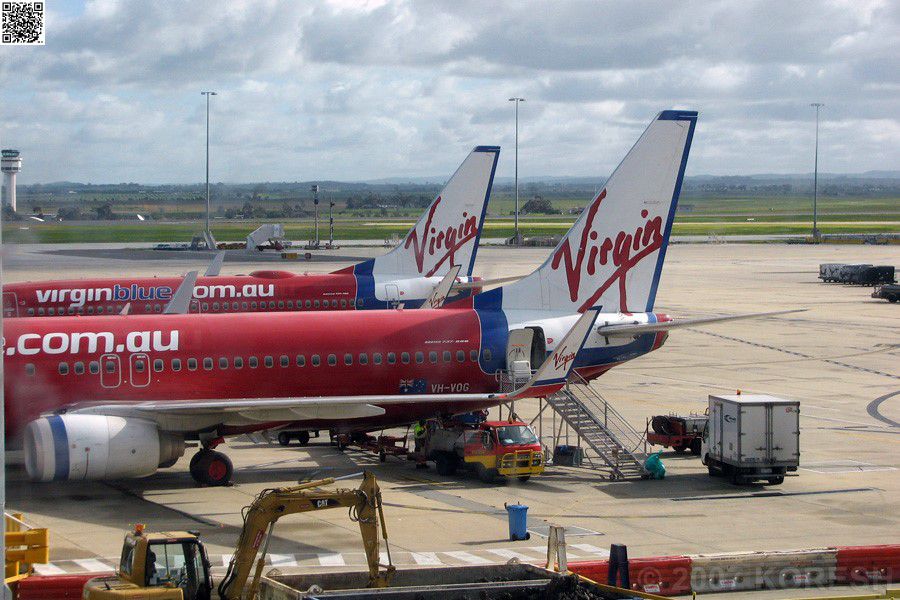 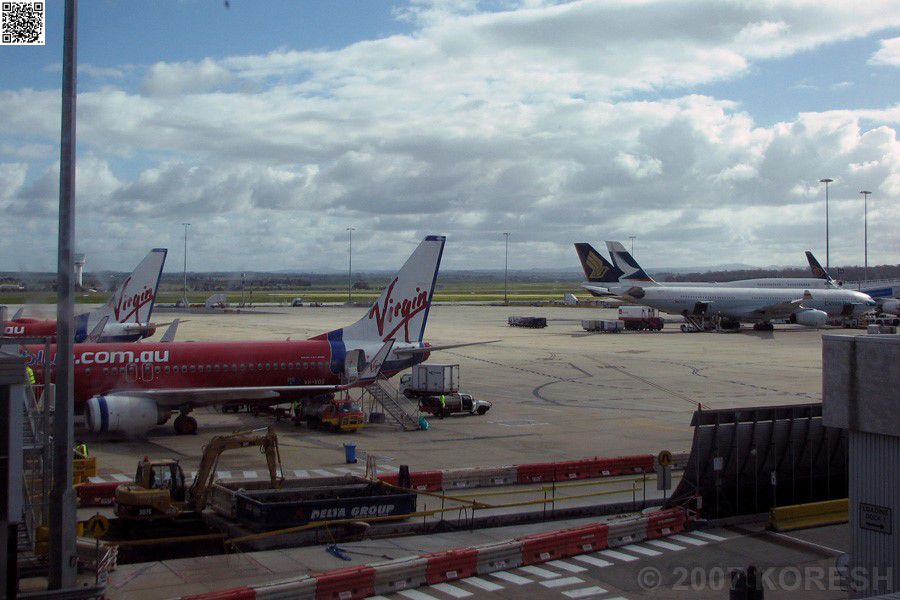 Soon it was time for boarding. After passing security. entered the waiting area 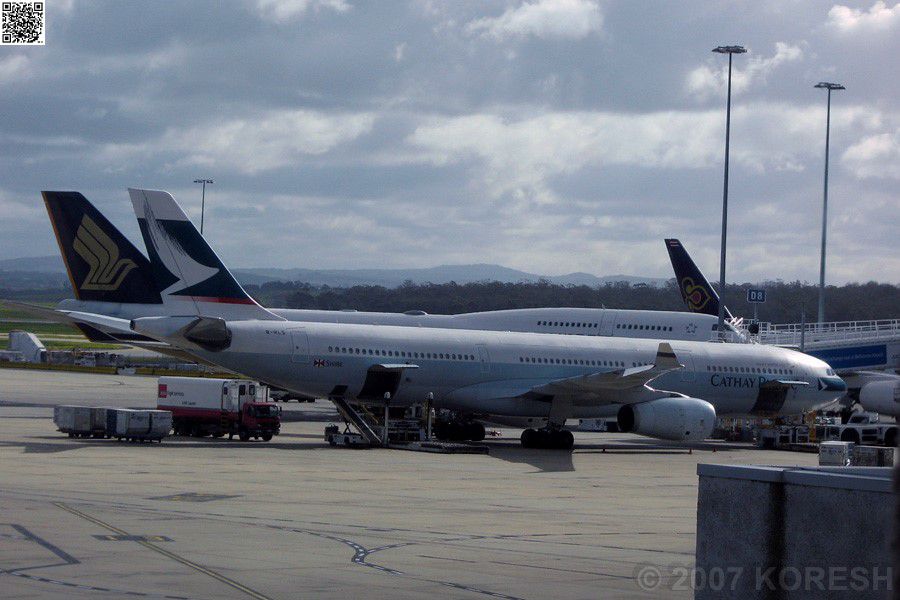 VH-VUA "'Bondi Babe" was operating DJ849 to SYD . This was going to be my 1st flight on Virgin Blue. 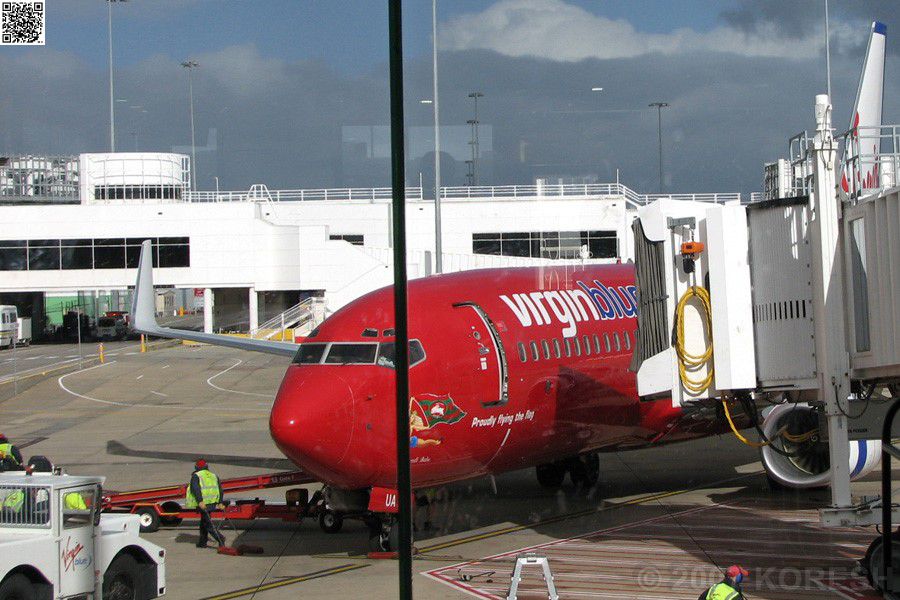 Boarding was called shortly after entering the waiting area. Boarding pass was scanned and allowed to proceed to board. Boarding was through aerobridge.

Virgin Blue had 3-3 seating in the Economy class. I was seated in the window seat, which I requested while booking seat.

Flight was partially full. I had a seatmate and we stuck a conversation.

Push-back commenced after boarding of all passengers.

Taxi and take off

After a short taxi, lined on the main runway and headed north towards Sydney. Flew over the Snowy mountains and being winter, witnessed snow-capped mountains.

Crew carried out manual safety demonstrations. Virgin promoted itself as a young and happening airline in those days. The crew was friendly but I didn't have any interaction apart from showing my boarding pass.

After attaining cruise level, buy on board [BOB] commenced. As I had meal earlier skipped the BOB.

While discussing the going on in Australia with my seatmate, our conversation turned to the mining boom and how long the boom. I remember the hearing that the boom was going to last for another 20 yrs with export of iron ore being the top commodity. In 2008, during the GFC , the company we had discussed about was close to bankruptcy. 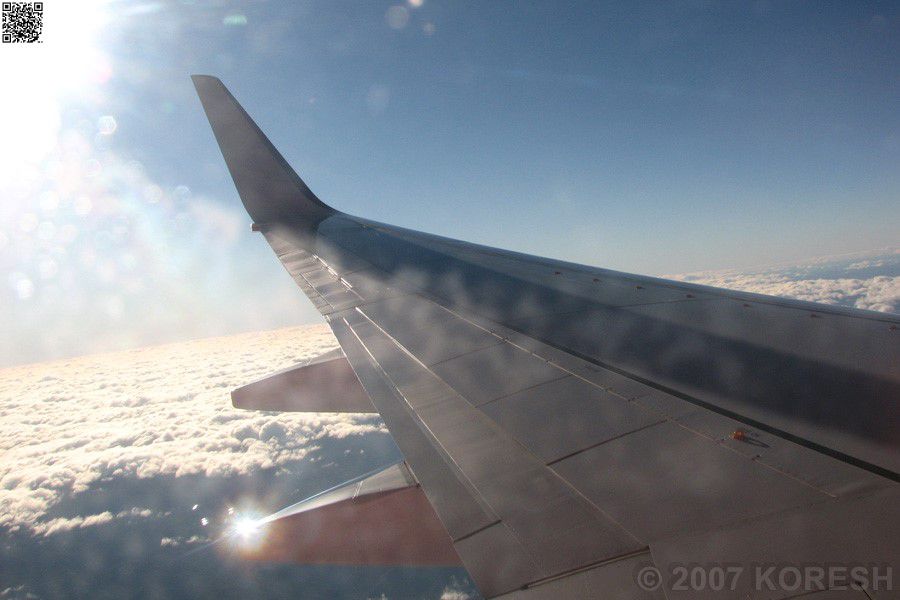 Flight deck came on the microphone to report we are close to Sydney. Cabin crew conducted rubbish collection and checks.

Landing was from the north to arrive on runway 16R. Docked at the Virgin Terminal gate. 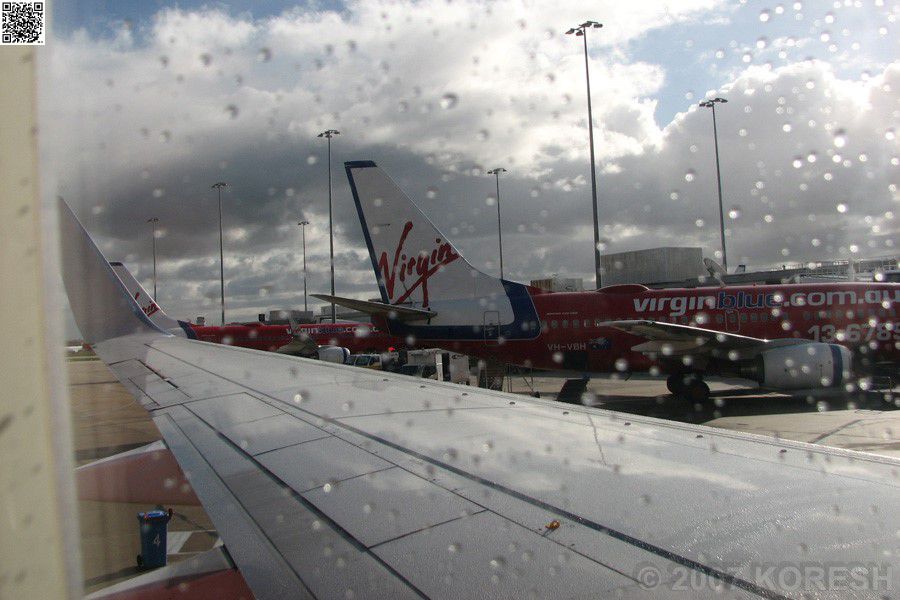 After arriving at the gate, disembarkation was through aerobridge in the front or stairs in the rear. I disembarked through the stairs.

After entering the terminal, headed towards the exit. Baggage came in 10 mins.

After collecting bag, I exited the terminal and queued for taxi home.

Hope you enjoyed the trip. Thanks for reading.

Virgin Blue was my choice for convenience of being able to reach my destination for reasonable fare. Flight took off on time. I had my lunch earlier and did not use the Buy On Board [BOB] service. Crew were friendly, I didn't have much interaction apart from showing my boarding card. Being a short domestic flight, entertainment wasn't an issue, I got into a conversation with my seatmate and time flew.