Hello and a warm welcome to Trip Report 28!

Flying back to India once again within a span of 6 Months was definitely something least expected as I was almost on the verge of flying on Saudia's Boeing 777-300ER to Saudi Arabia for Pilgrimage. However once again, the Saudi Government's unreasonable Law's regarding Pilgrimage (Umrah) Visa's had been amended again!  This meant that anyone travelling from Sri Lanka to Islams's Holiest Cities was permitted to do so with a Three Year gap between visits  (and not 2 Years as they announced previously)

With hopes being dashed for the second consecutive time, we decided to go ahead with Plan-B and India was back on the cards once again.
My idea was to fly out to Jaipur, connecting in Chennai on IndiGo, to visit the Ajmer Dharga, and then again from Delhi to Chennai on Vistara's all new Airbus A320Neo en-route to Tiruchirappali on Air India's ATR72-600 to visit Nagore Dharga located 150KM east of Triuchirappali and back to Colombo on IndiGo. This itinerary proved to be tough and a bit on the expensive side with many people questioning the practicality of covering both North an South India in a matter of 7-8 days.

Upon Amending the Itinerary, I decided to keep it simple and booked a Multi-City Itinerary on Sri Lankan Airlines that would take us from Colombo (CMB) to Trichy (TRZ) with our return sector being from Bangalore (BLR)

A total of 2 Flights Operate daily to Trichy with UL flying their Older Narrow- Bodied Airbuses to TRZ.
BLR-CMB on the other hand looked  more attractive with 3 daily connections comprising of IndiGo operating flights 1 x daily with the remaining 2 slots operated by Sri Lankan Airlines

FR24 showed A320CEO's being operated by UL to and from TRZ with an odd A321 and A320Neo being operated from time to time. This was considered acceptable since it was the early morning flight that was usually having a higher load factor when compared to the second rotation that had low yield's, thereby it been impractical for UL to operate one of their better aircraft.
UL's website also showed Seat Maps for the Older Airbus A320's upon booking and during the process of seat selection

Moving on to the FR!

With Departure scheduled at 1330hrs, Taking the Airport Expressway, we managed to get to CMB airport within a 1 1/2 hour time frame with absolutely no traffic en-route due to school holidays and the up-coming Sinhalese and Tamil New Year

CMB was empty, just as it was a couple of months ago at this time. Personally I do prefer such Weekday Morning departures in contrast to a afternoon or late evening Departure from CMB which coincide with departures to the Far East and the Middle East

Colombo Bandaranaike International Airport was still under renovation as it was before. The usual Passport and Ticket checks were carried out and we were allowed to proceed into the terminal building.
Unlike Indian Airports, Sri Lankan Airport authorities do not insist on printed ticket copies upon entering the airport

Checked in Online the night before with Sri Lankan Airlines giving us customers the option of a 48 hour check in window prior to departure.
Making our way to the Online Check in counter to drop off our bags and to collect our BP's took almost an Hour!

The dedicated Online Check-in counter was unbearably slow, with just one family and another 4 Passengers in front of us, the Ground Handling Agent in this case was lazy, lethargic and taking his own time in performing a simile task that should be carried out fast and efficiently. The regular  check-in counters were operating at a much quicker pace compared to the Online Check-in counters which are set up purely for a quicker service to customers in order to minimize time spent in going through such formalities. Sadly the counter today just seemed to be the opposite

Immigration was just a matter of minutes and we moved to our assigned gate B4, located on the ground level which meant that we had to take a bus to board the aircraft very  much to my liking.

Spotting was a tad bit monotonous with the usual Airbus fleet of Sri Lankan Airlines taking center stage. Nothing unusual or spectacular could be seen from the viewing area today.

I did catch a glimpse of a Thai Lion Air Boeing 737-900ER from outside the airport though.
Nice to see more carriers such as Thai Lion Air and Thai Air Asia venturing into the Sri Lankan Market. With LCC's and Hybrid LCC's such a Malindo Air establishing themselves as full on competitors to full-service airlines, we do have reports that SpiceJet would be operating new frequencies to and from Colombo Bandaranaike International Airport connecting Hyderabad (HYD) and Mumbai (BOM) filling in Jet Airways vacant slot. Vistara too would be looking to connect Delhi (DEL) in the near future and I do speculate IndiGo expanding its operations in Colombo.

So this was my routing for today:

First of all, I'd like to apologize for the low quality images on this FR, as i downgraded my device to an iPhone 6

Making our way downstairs to Gate B4, after spending some time at the Duty Free shop's located at the upper level of the Departure terminal prior to boarding the bus that'd take us to a remote stand where our parked A320-200 awaited us.

MRE! after many years of avoiding this very aircraft, I was just moment's away on flying Mihin Lanka's ex-Airbus A320-200, incidentally the last ex-Mihin Lanka  Aircraft remaining in UL's fleet (2 of their A321's and an A319 had been returned back to the leasing company)

I was low key happy though, since I had never had the opportunity to fly on Sri Lanka's first (and probably the last) home-grown LCC. I did manage to book on Mihin Lanka a couple of years before they merged with Sri Lankan Airlines, booking a CMB-MAA-CMB itinerary which was scheduled to be operated on their Airbus A321. However I was re-booked on a Sri Lankan Airlines flight with my itinerary changing to Kochi (COK) due to the Mega Floods in Chennai  (Dec 2015)

To be honest, the Crew wasn't outstanding, however they were very accommodating in filming on-board  and did allow me to change my seat prior from seat 7A which had a severely scratched window making it very difficult to focus my GoPro. I thereby moved to the aft cabin to row 23A and had the entire row to myself. Here we have the view from  Seat 7A on 4R-MRE

Knowing the fact that MRE was one of UL's A320CEO's that wasn't configured with IFE didn't seem to bother me due to this sector being more or less under one hour.
However, the usual Sri Lankan Airlines "Serendib" magazine as well as "Serendib Treasures" On-board Duty Free Magazine were available in the aircraft seat pocket 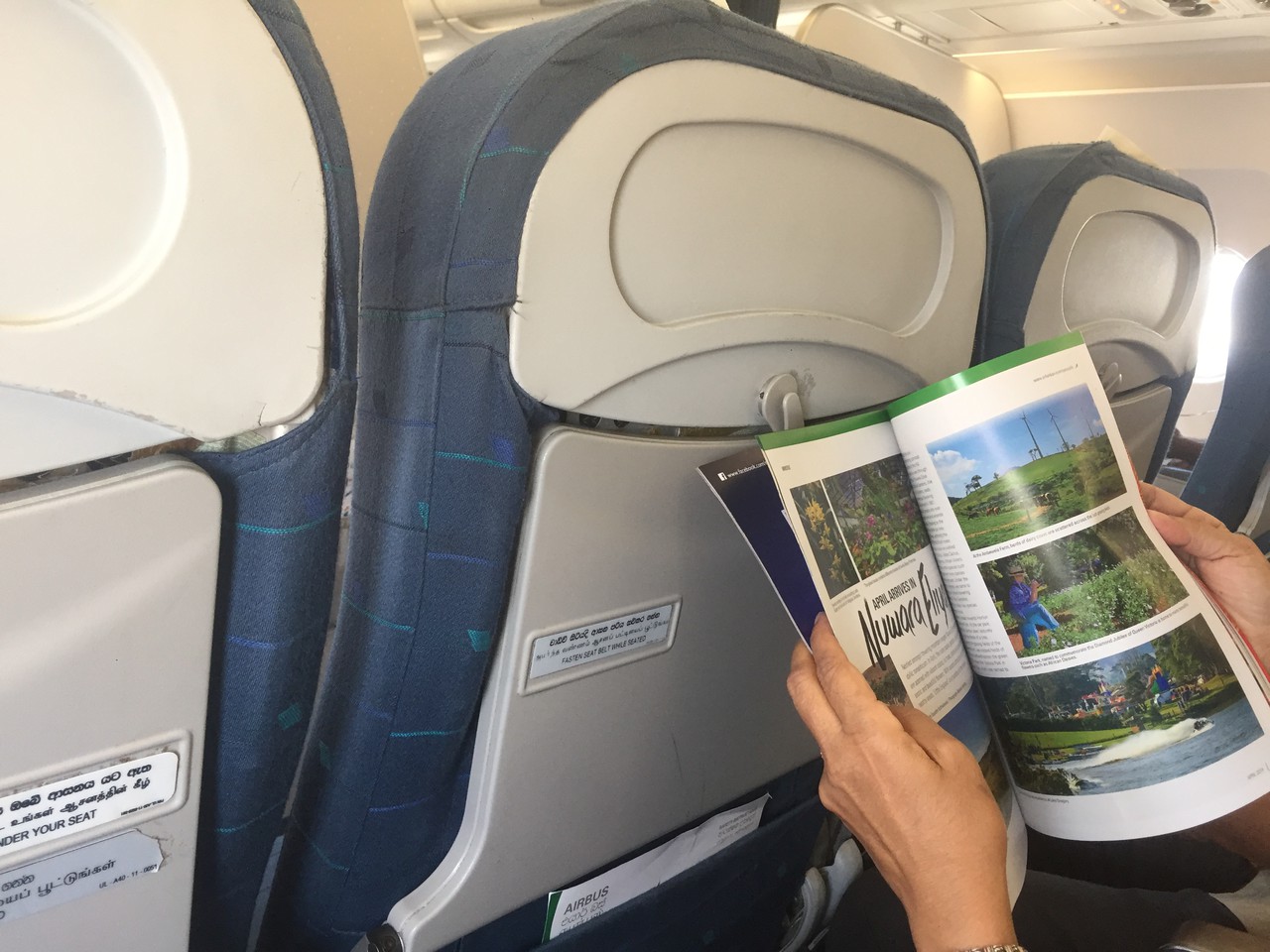 Worn out, but decent for a short hop (Definitely better than 4R-ABL) 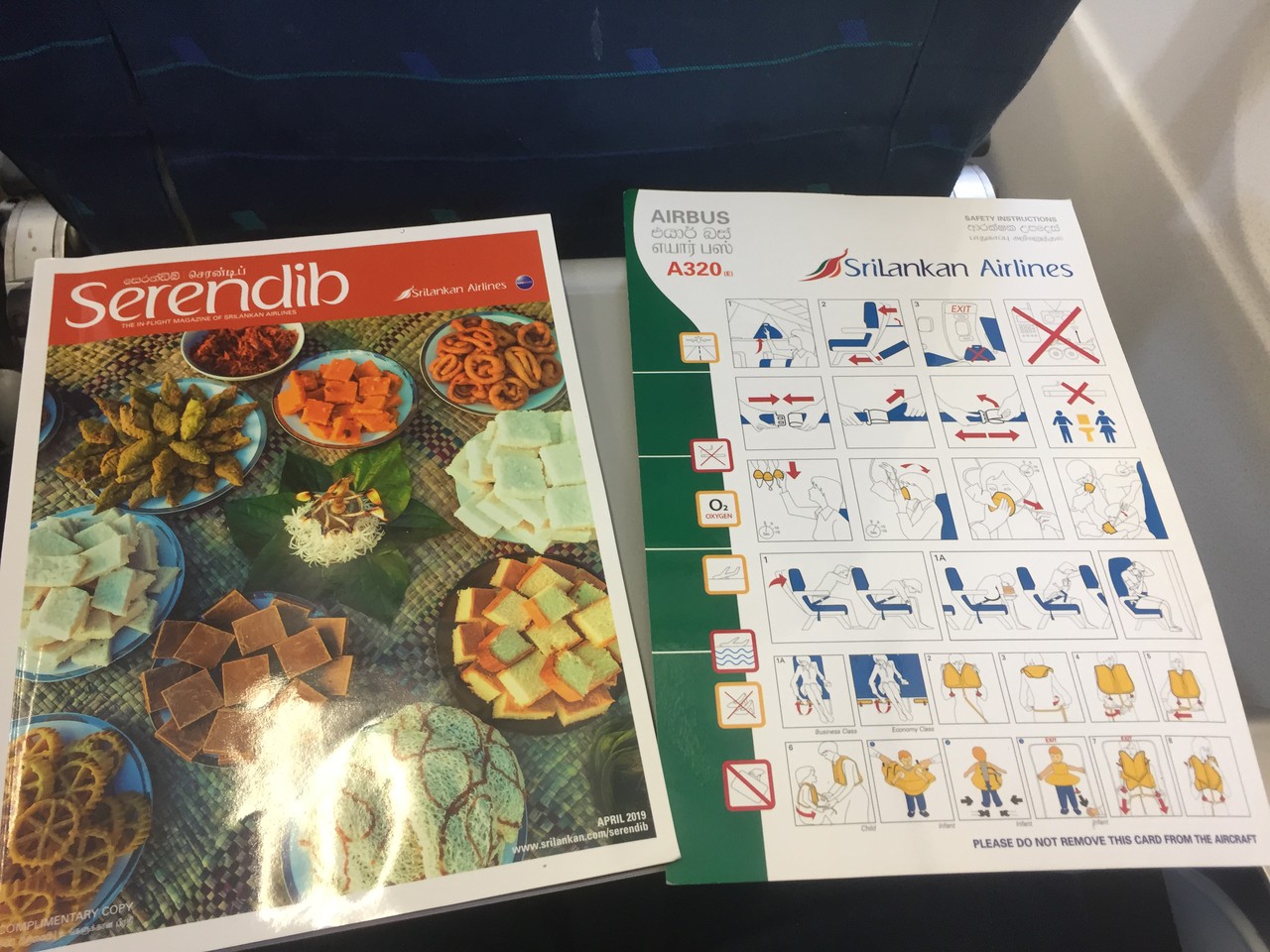 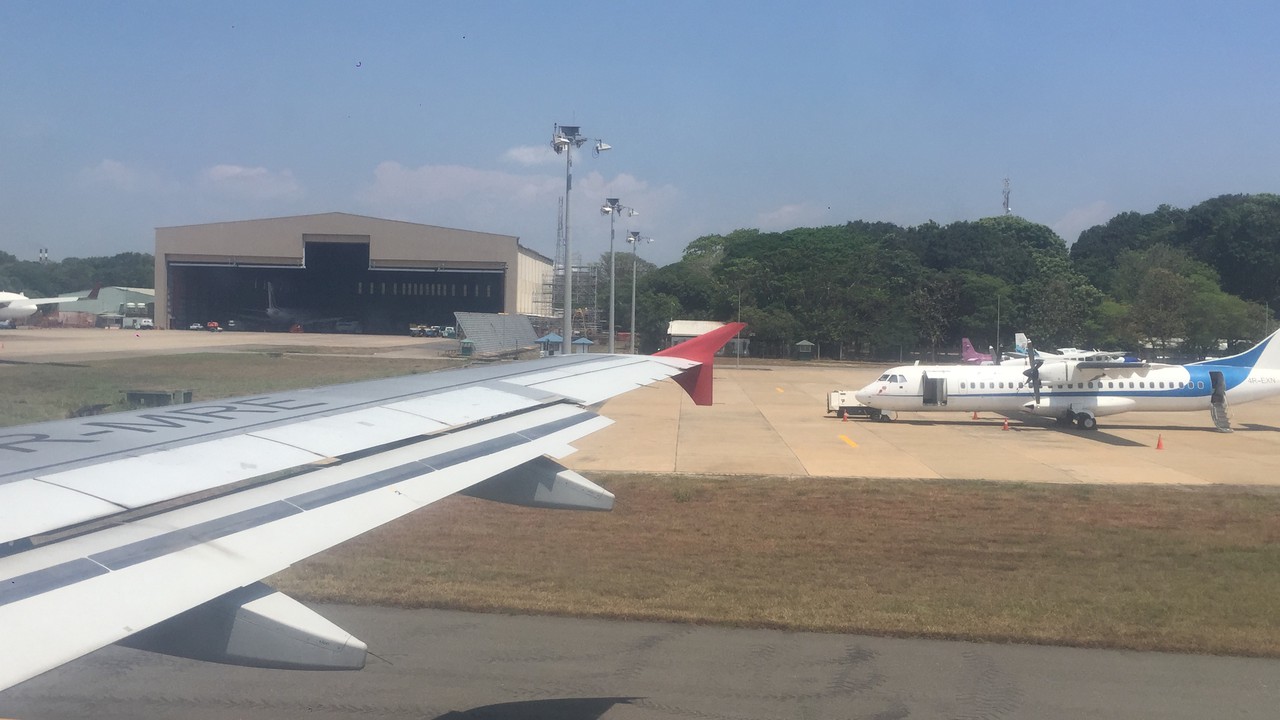 Take-off was on time with the 13 Year old Airbus A320-200 clearly showing signs of age.
Maintenance was poor, probably due to the fact that this aircraft is utilized only on short-haul and on the occasional flight to Bangkok (BKK), Mumbai (BOM) and Dhaka (DAC) and would probably be the next aircraft that would leave Sri Lankan's fleet.
However, such maintenance is unacceptable. Seats were discolored and falling apart windows were terribly scratched and even the galley looked lost in time. I didn't visit the lavatory due to obvious reasons. 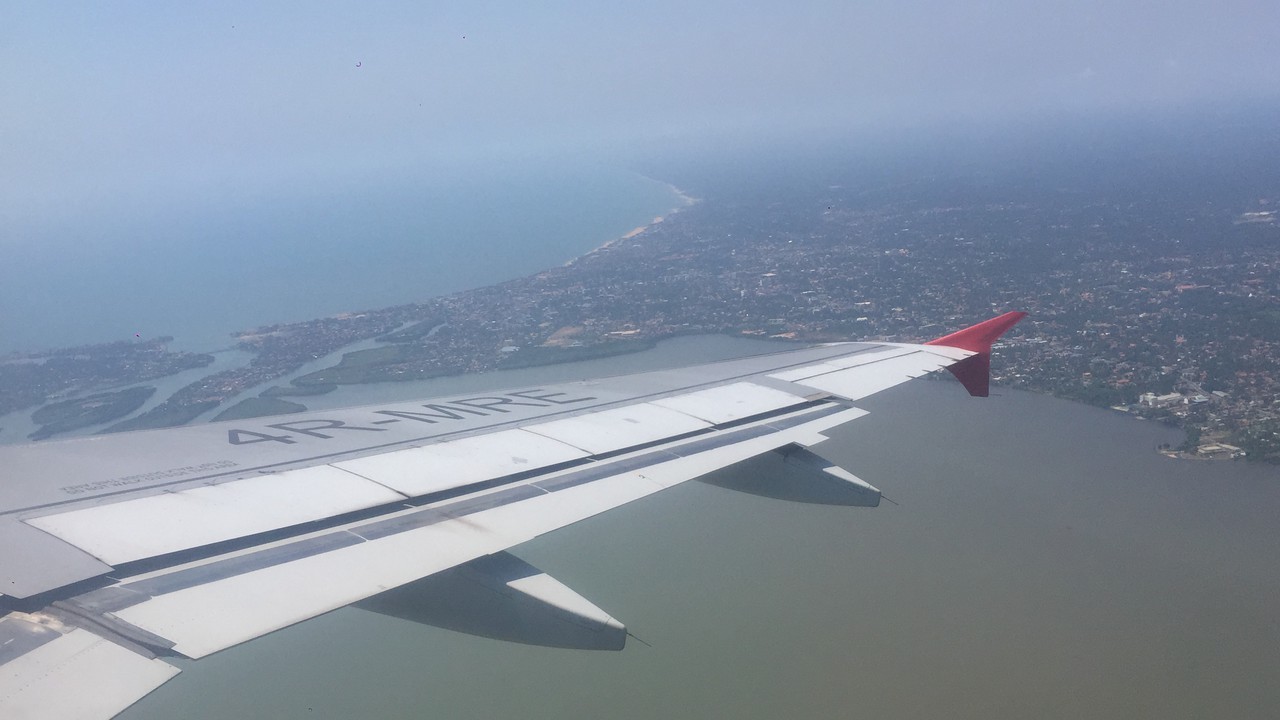 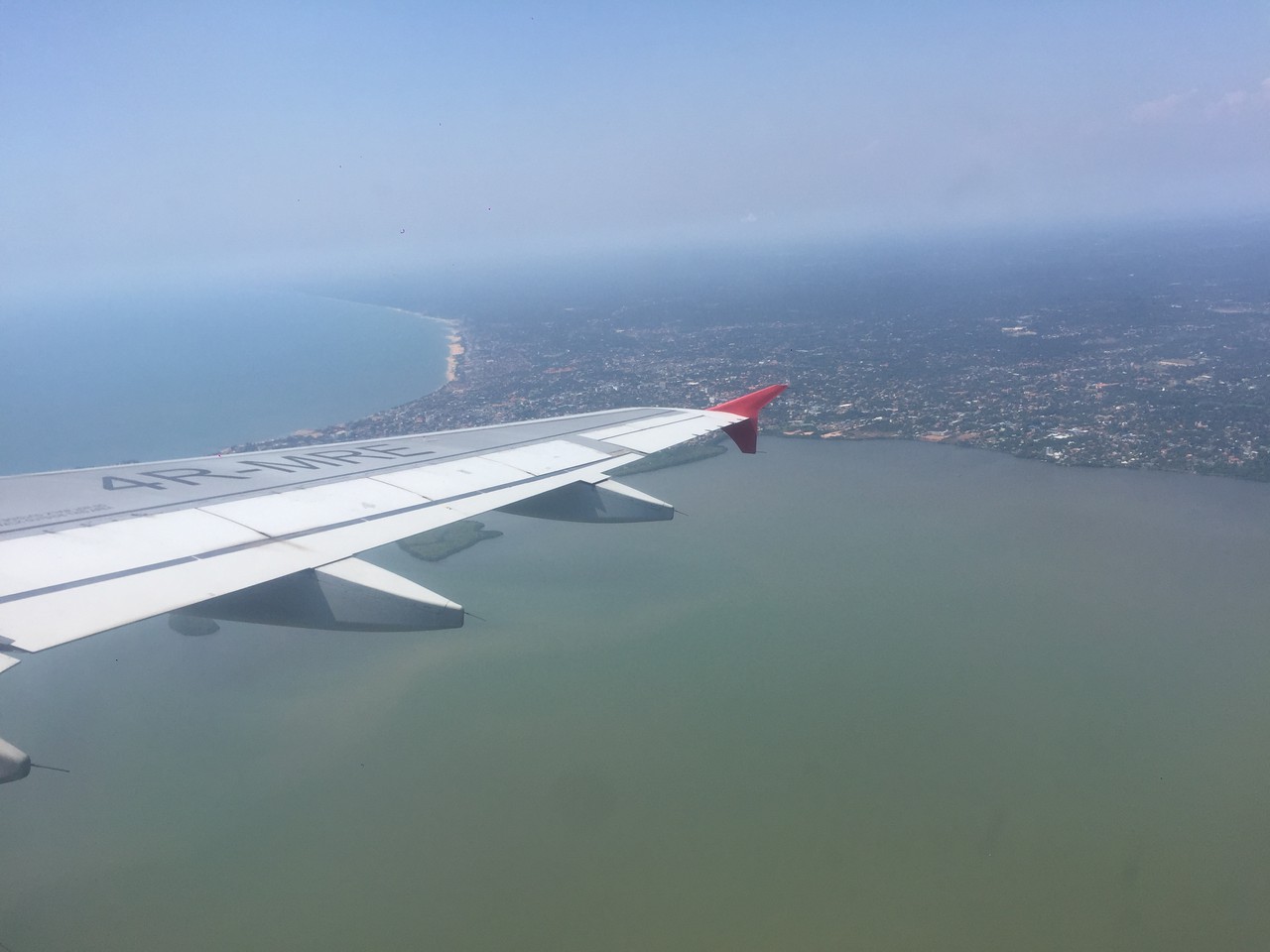 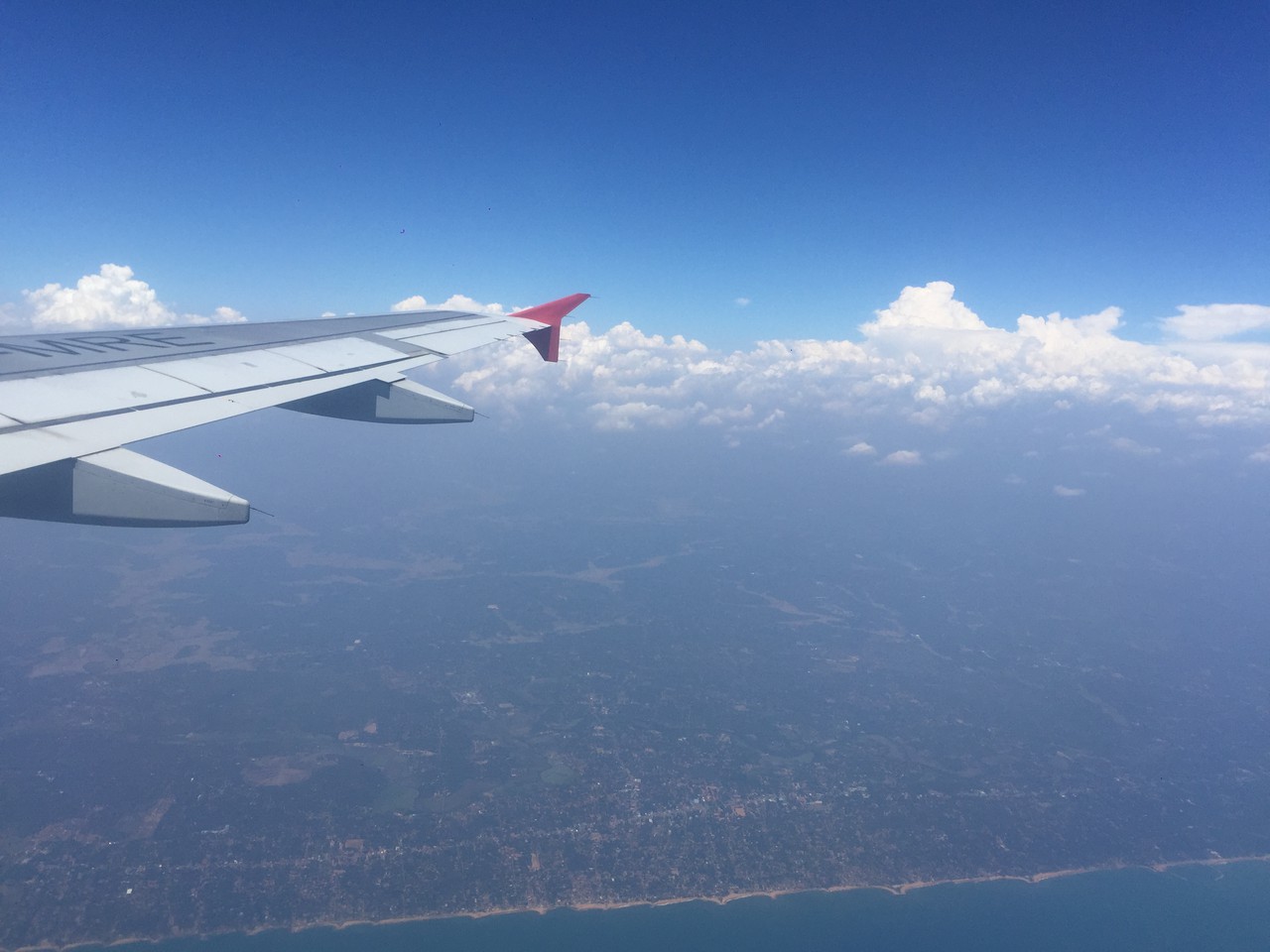 The crew did impress me in terms of Service. Unlike in my previous rotation to Chennai (MAA) which a cup of  water and a Cold bun was served as refreshments. Today's meal service comprised of a neatly packed Toasted Vegetable Bun accompanied by a selection of either Apple or Orange juice and water. UL had finally done away with the poorly presented cold bun which had earned them many negative reviews on their catering which they deserved. It was good to see that the National Carrier was now focusing on Short-Haul product and their catering 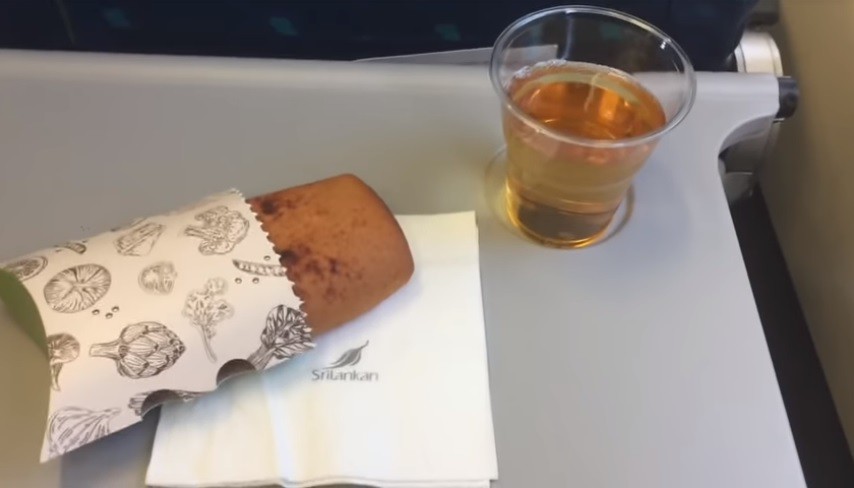 I switched seats once again for Lading as there were a bunch of inconsiderate passengers playing loud music who probably thought that they were flying on their own Private Jet. Upon voicing my complaint to the crew, they apologized for the inconvenience and the passengers mobile device was turned off much to the relief of the handful of passengers in the aft cabin.
Upon checking on my folks in row 7, I managed to take a headcount of pax flying inbound to TRZ. The load as expected was on the low side, a total of 30-35 pax were traveling in Y class and J Class flew empty

Landing was announced and we landed in Trichy (TRZ) ahead of schedule. 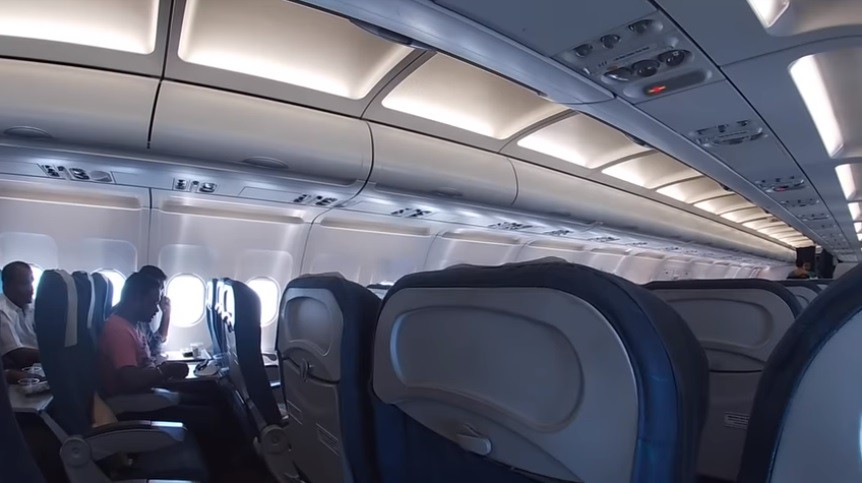 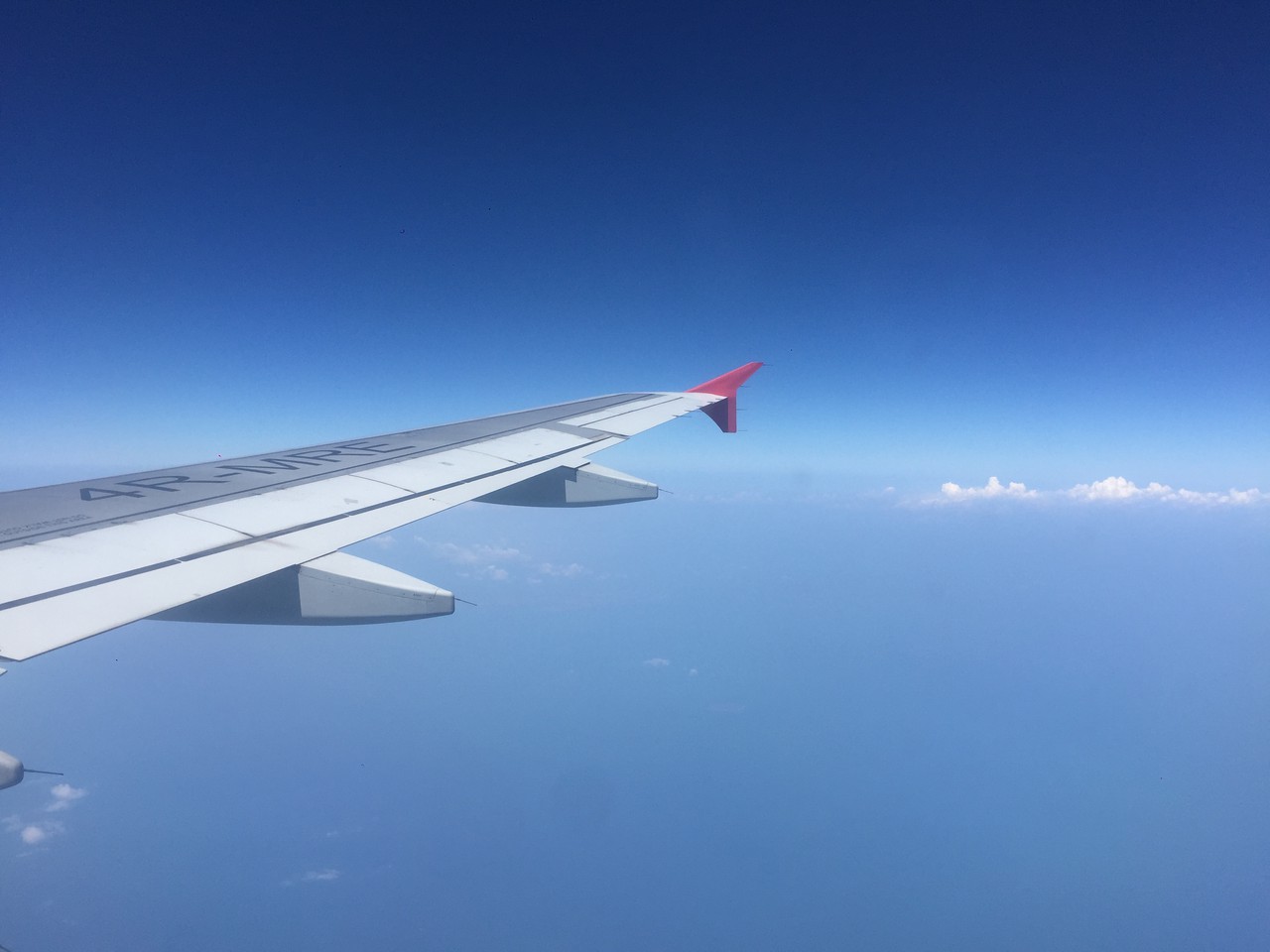 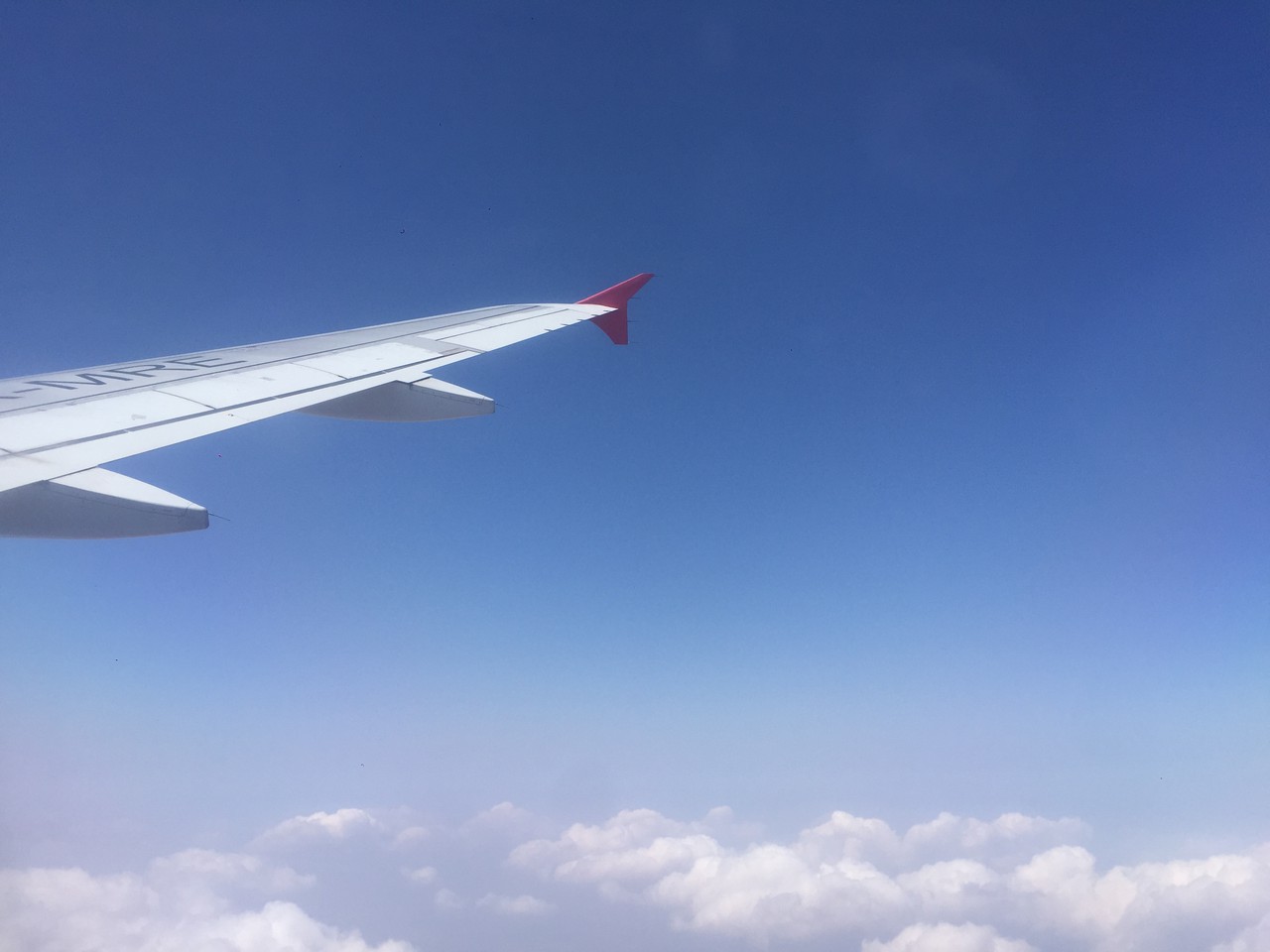 First Impressions of Trichy was that it was a much smaller airport, quite similar to Madurai (IXM was far nicer though)
I stopped filming in the aircraft since I was unsure about the local restrictions on filming in the airport and on the ground. 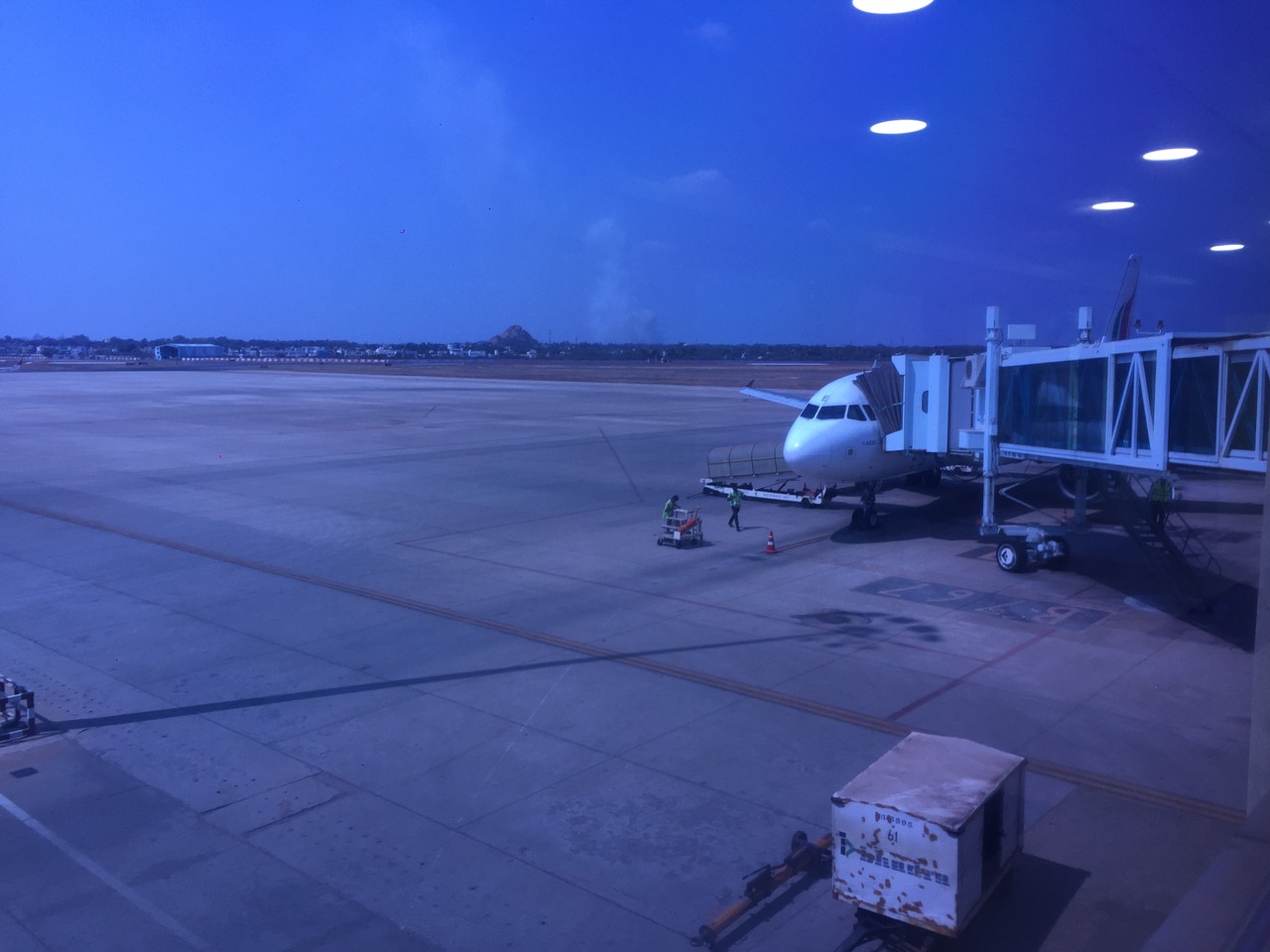 We disembarked via. the one of the three aero-bridges and made our way towards Immigration. Even though the airport was small, it lacked signage and getting about wasn't as easy as it should have been. We filled up our arrival cards and we proceeded to completing immigration formalities. With a very few selection of places to have lunch, I thought it would be best to head straight to the hotel and order ourselves some decent lunch form the Hotel's restaurant

Pre-paid airport taxi cost us INR 350/- from the Airport to Trichy Central which was situated about 8KM away
Trichy was absolutely boiling! The temperature was probably hitting 40 degrees Celsius far warmer than Sri Lanka
Probably spent more than I should have on the Taxi, but do note that Trichy is limited to only Uber Tuk's (UberAuto) with OLA being the local operator dominating the market.

There is another cheaper mode of transport to and from the Trichy Airport though (and no it is not public transportation)
Find out in my next FR!

Overall, an above average experience on Sri Lankan Airlines, even though it was on one of their Oldest Aircraft in the fleet
They've certainly revamped their overall short-haul product and service and I wouldn't hesitate to fly this sector again