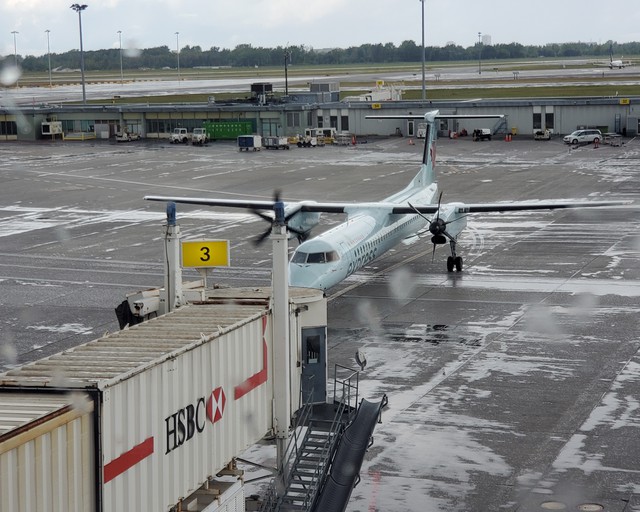 #20 out of 78 Airlines A minimum of 10 flight-reports within the past two years is required to appear in the rankings. 348 reviews

This is the third flight in a short week-long trip with my family to Canada. It was my first time in Canada! We had a marvelous time and can't wait to go back.

I'll spare everyone a bunch of ERJ145 economy reports. This is the domestic Canadian flight between Montreal and Toronto. It is also my first time on Air Canada.

We got to the airport fairly early and checked in manually. The Air Canada agent at the Star Alliance Gold check-in was very welcoming and informed us the Domestic Maple Leaf Lounge was right next to our gate. It was a quick trip through security and we were soon at the lounge. 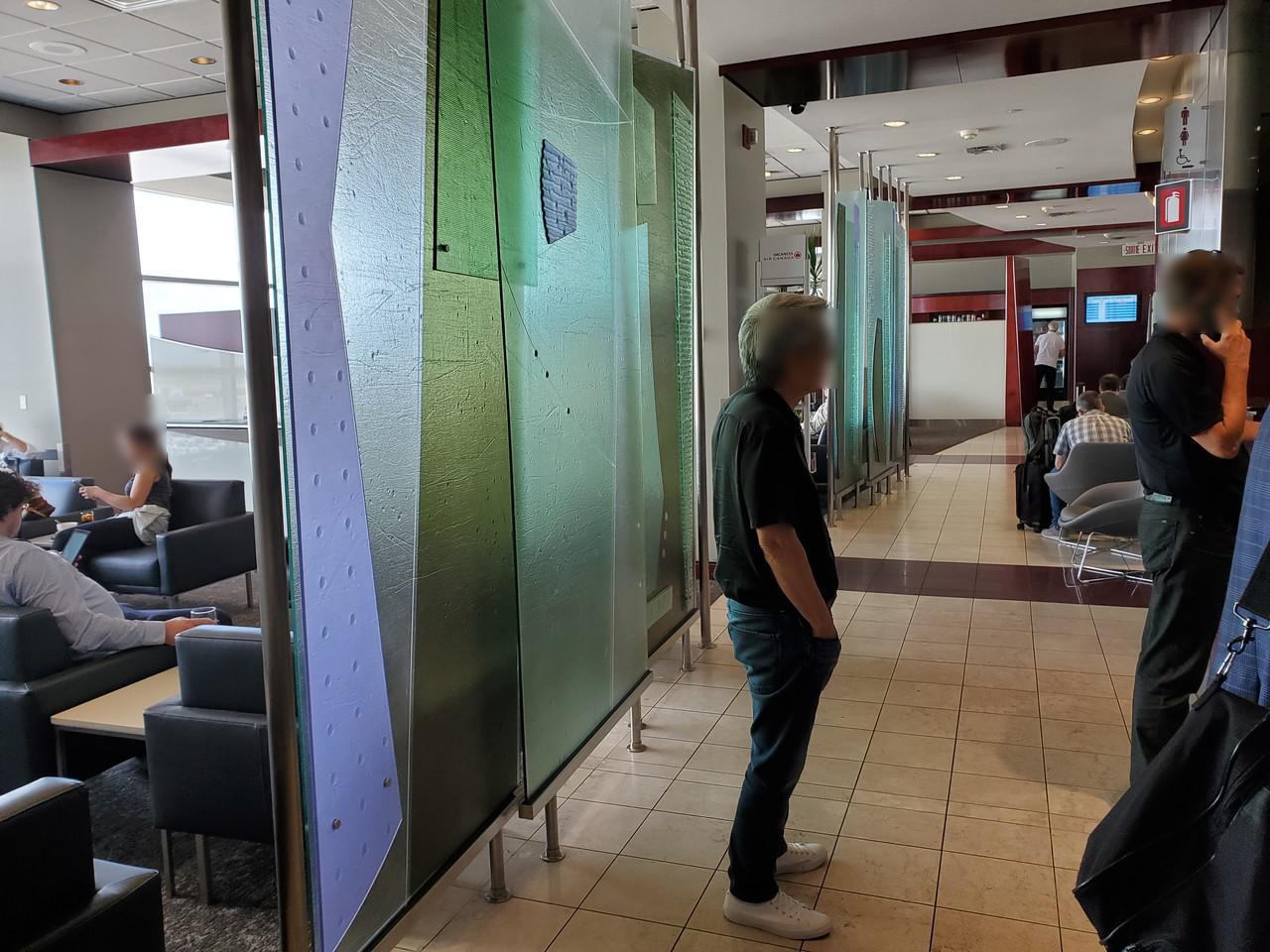 It was a fairly small lounge and decently packed when we first got there. It was hard finding seats together for the four of us, so we had to sit apart at first. Later we managed to grab the four seats right next to a telescope, but couldn't actually see anything through it. Not sure if the lens were too scratched/dirty or what. I should add that there were very few outlets throughout the lounge. 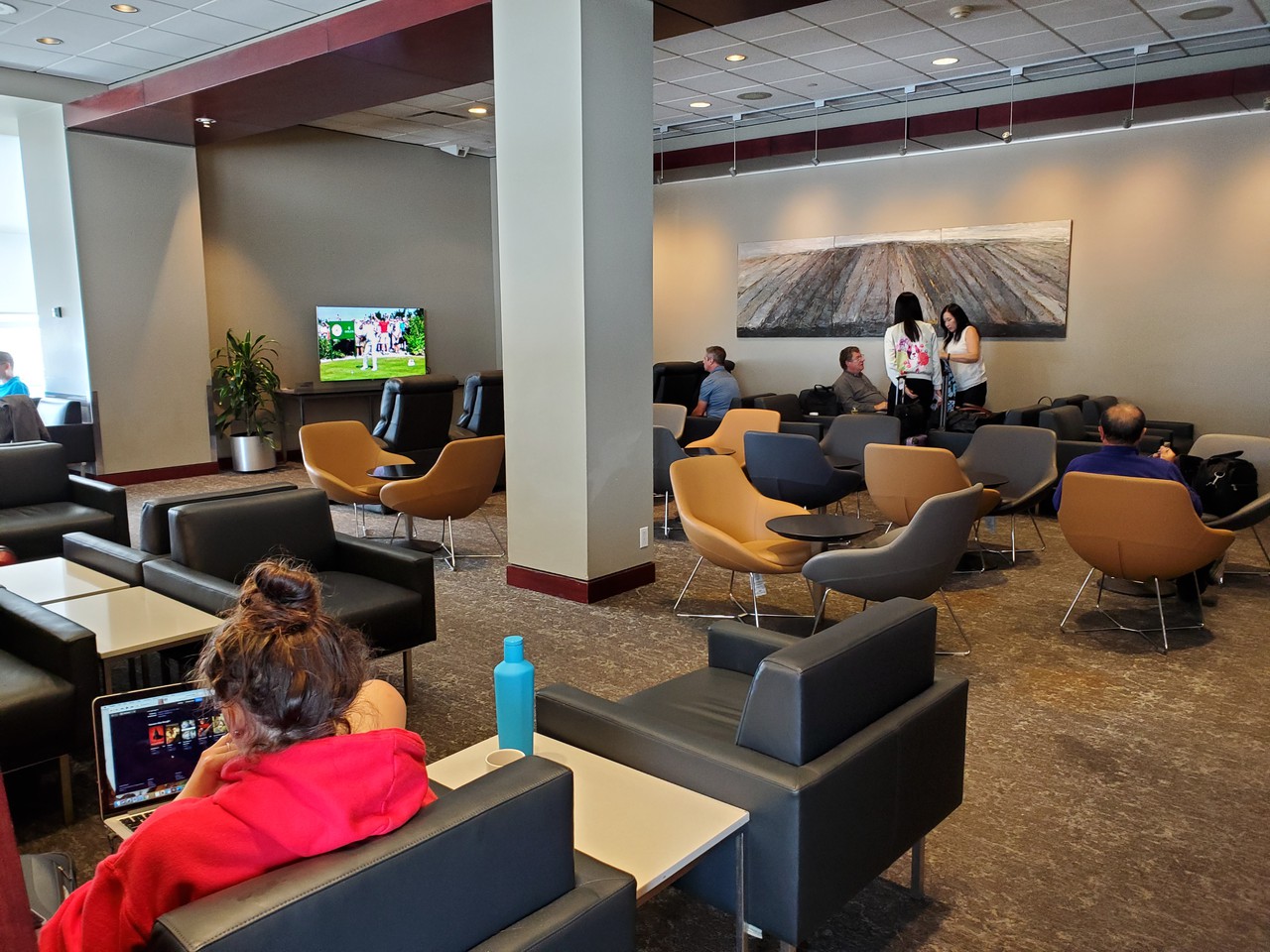 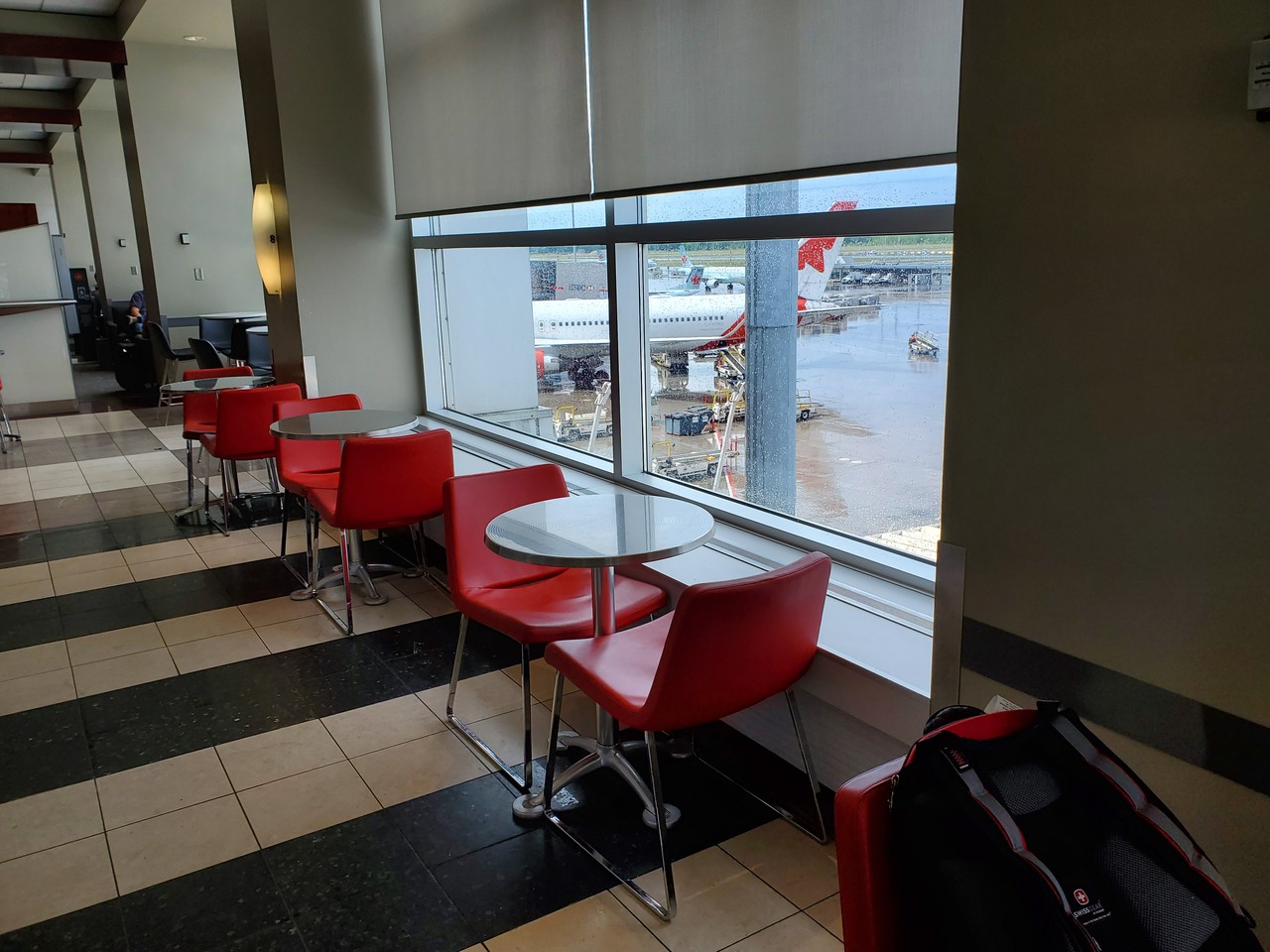 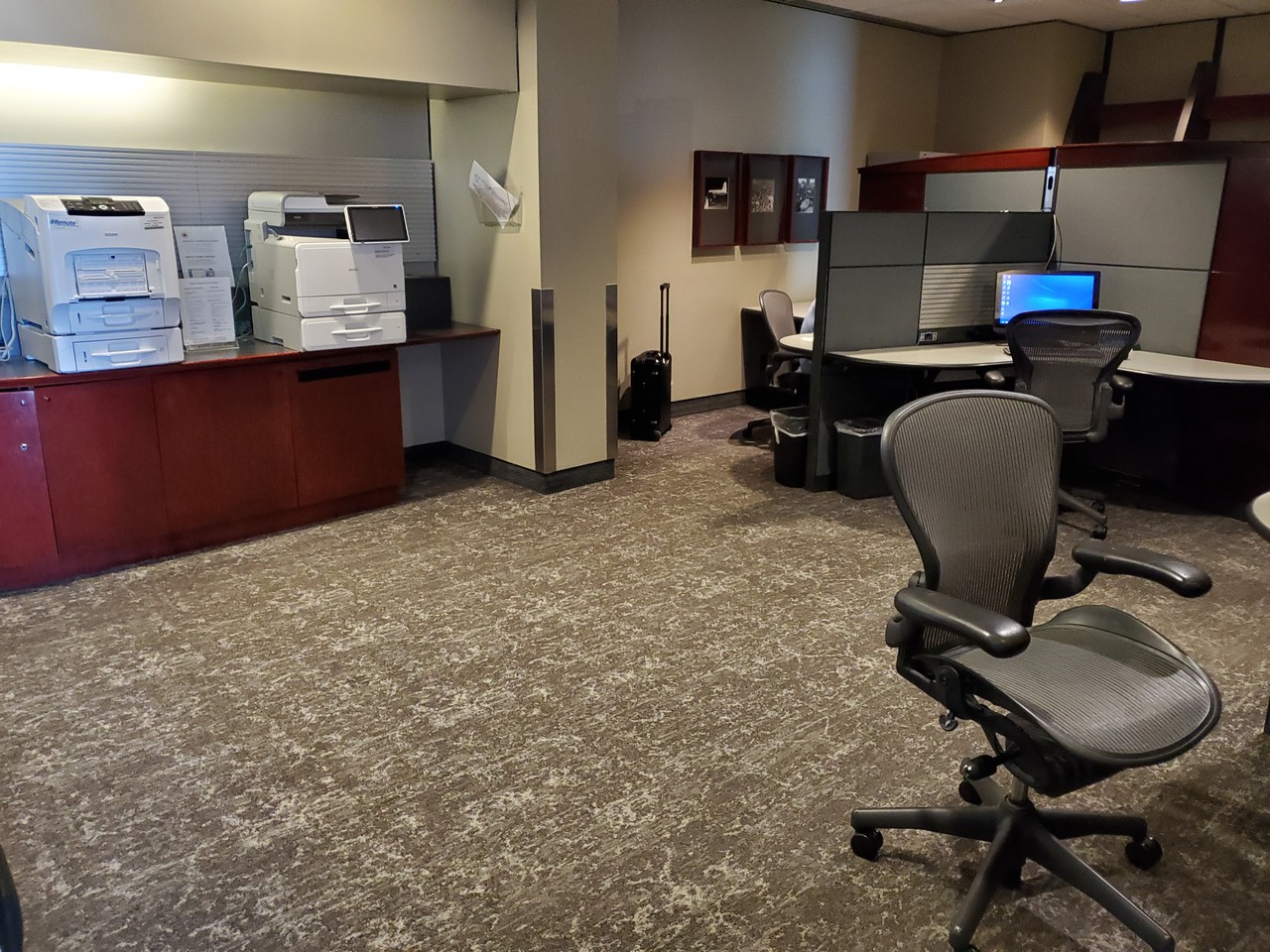 The bathrooms were small, but kept decently clean through my stay. 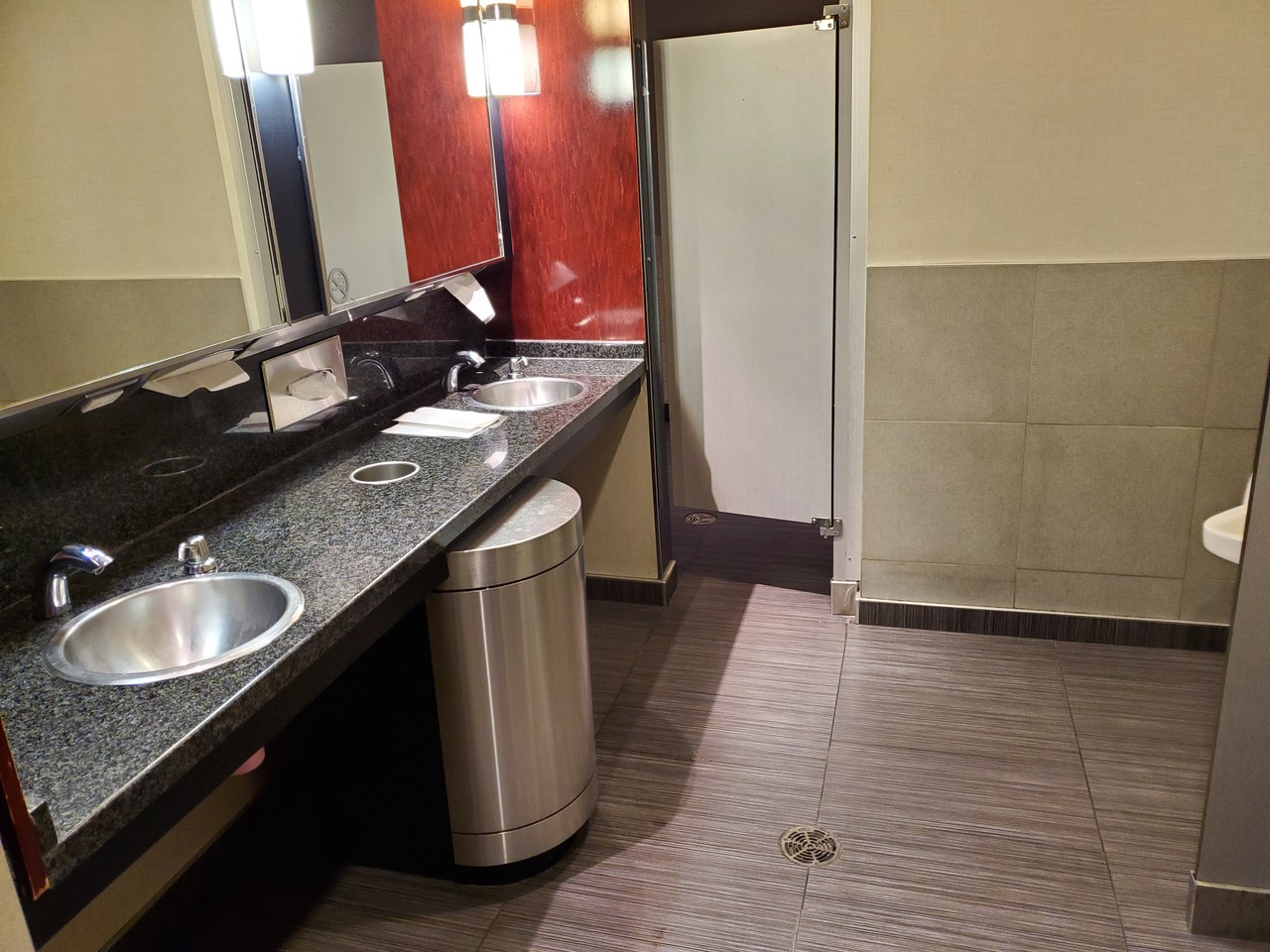 There was a small liquor and wine selection as well as a small buffet spread. The hot options were kind of lackluster, but better than nothing. The highlight of the food was probably the freezer with Häagen-Dazs bars. 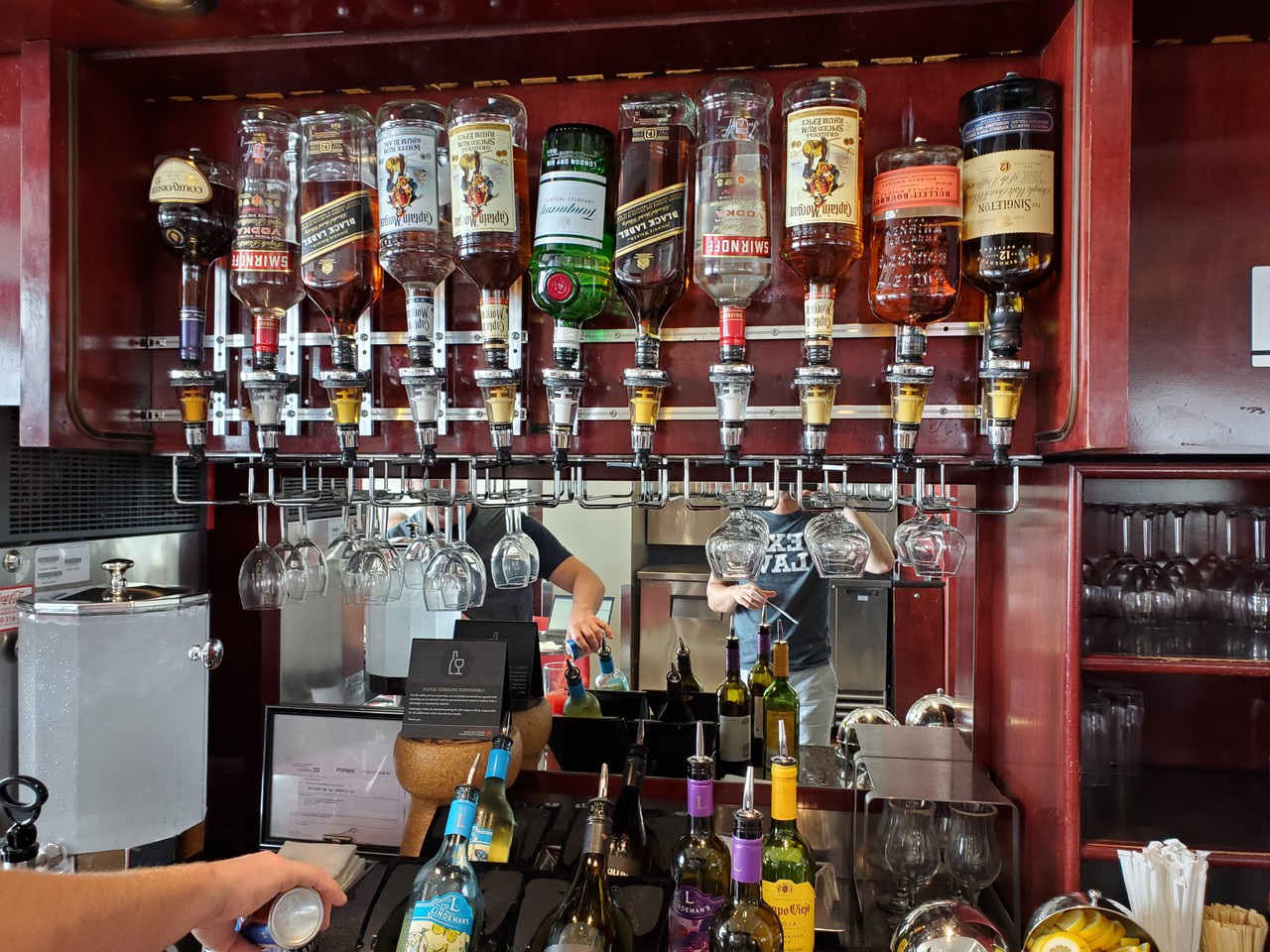 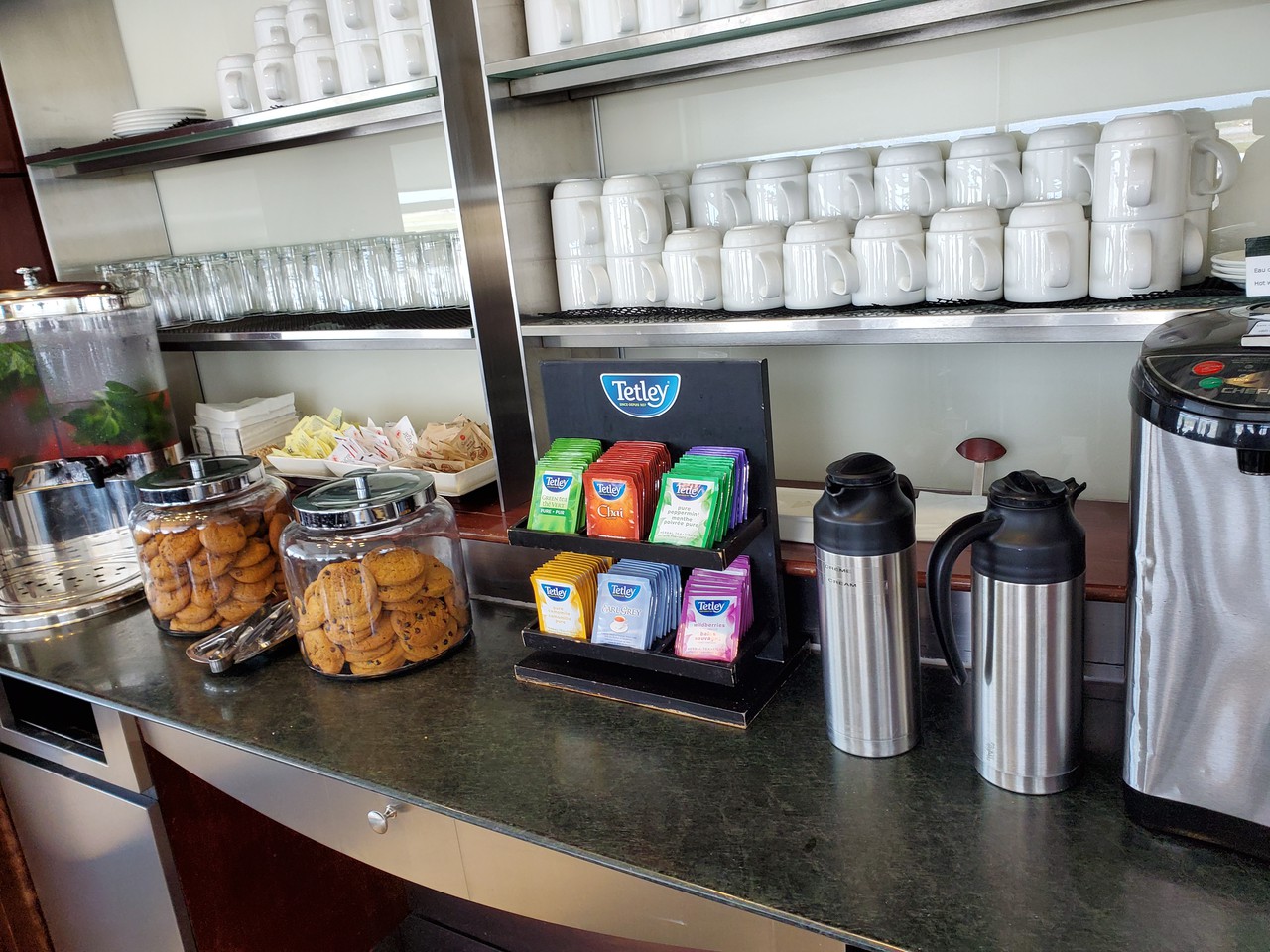 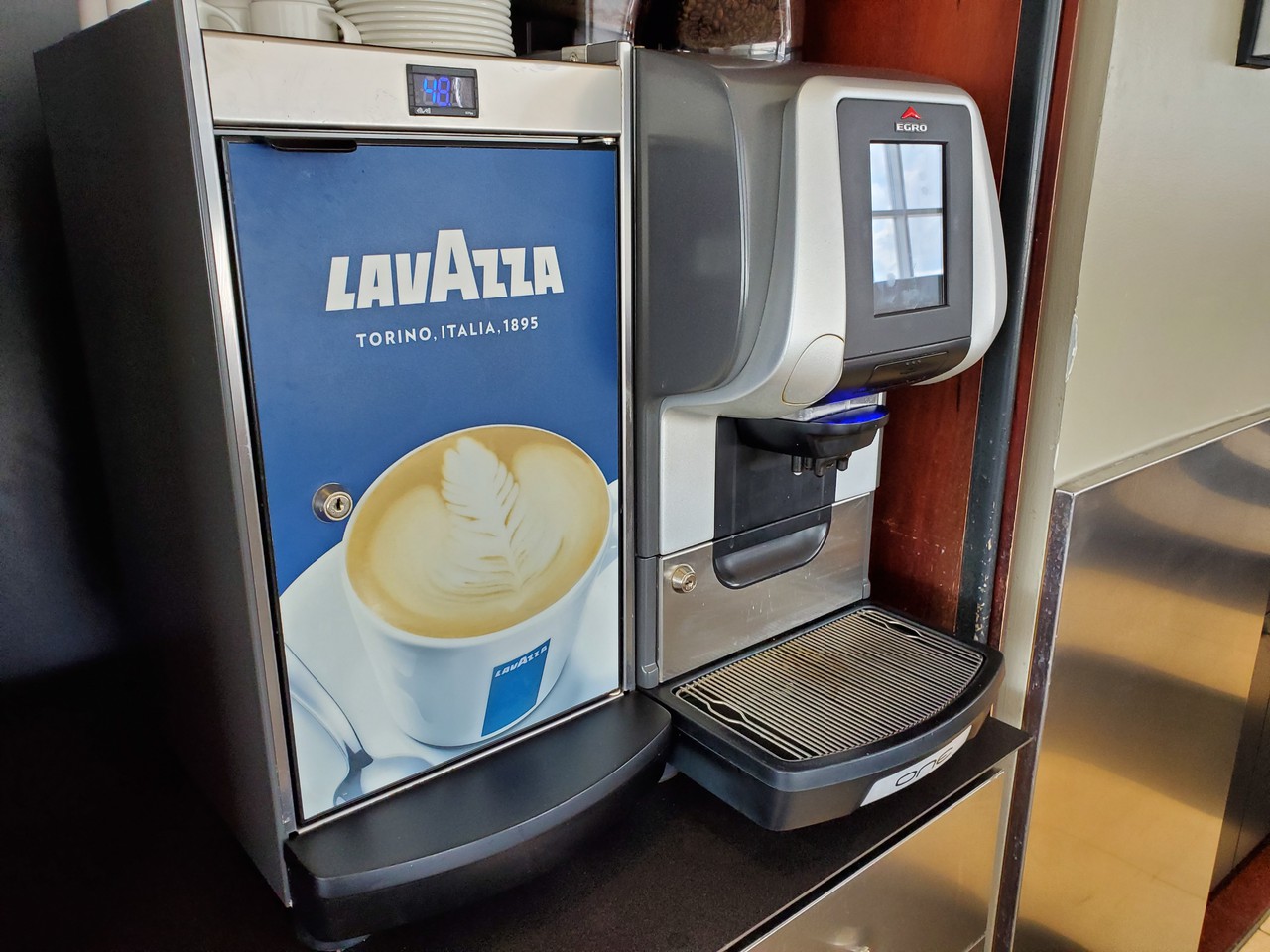 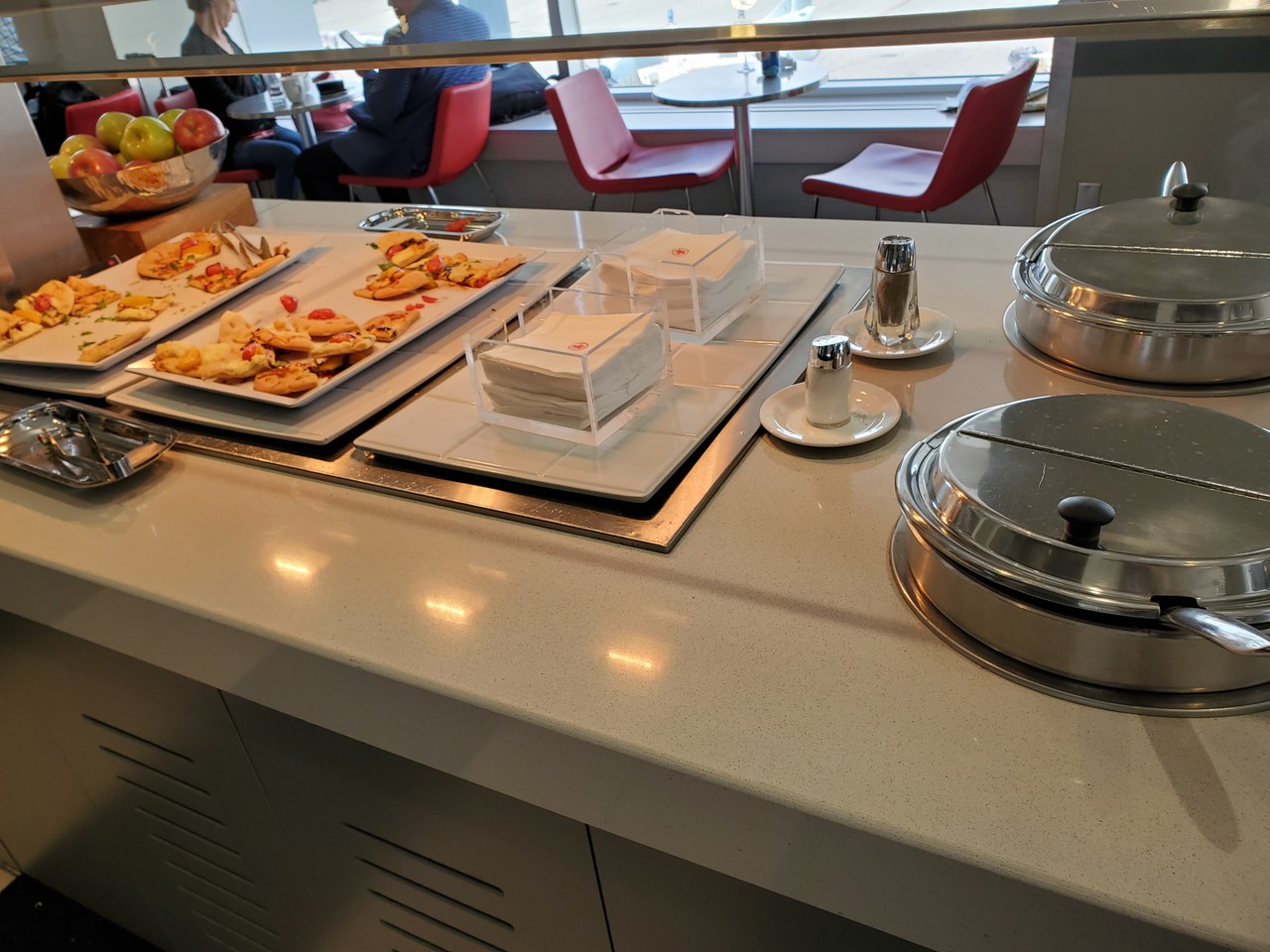 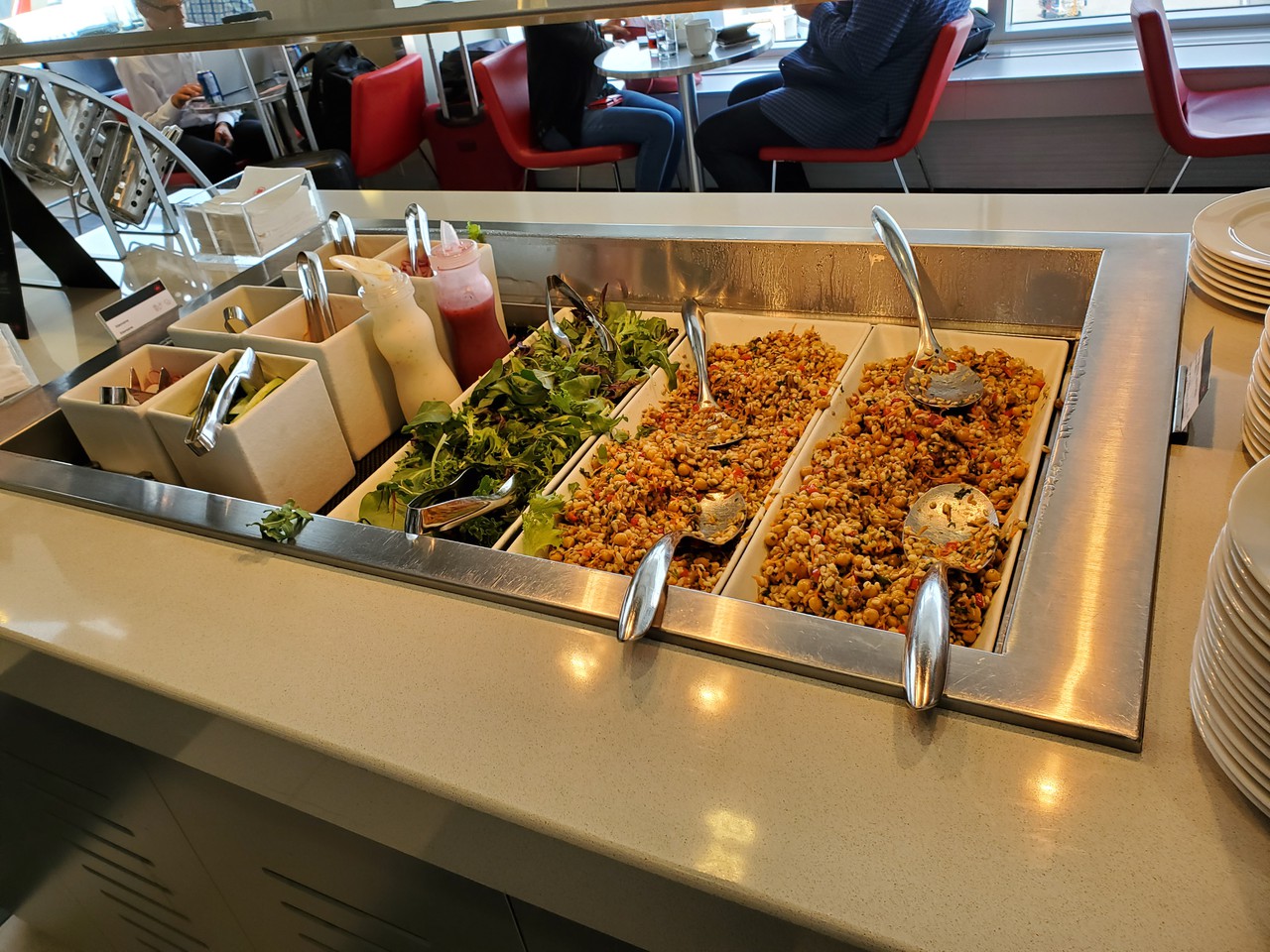 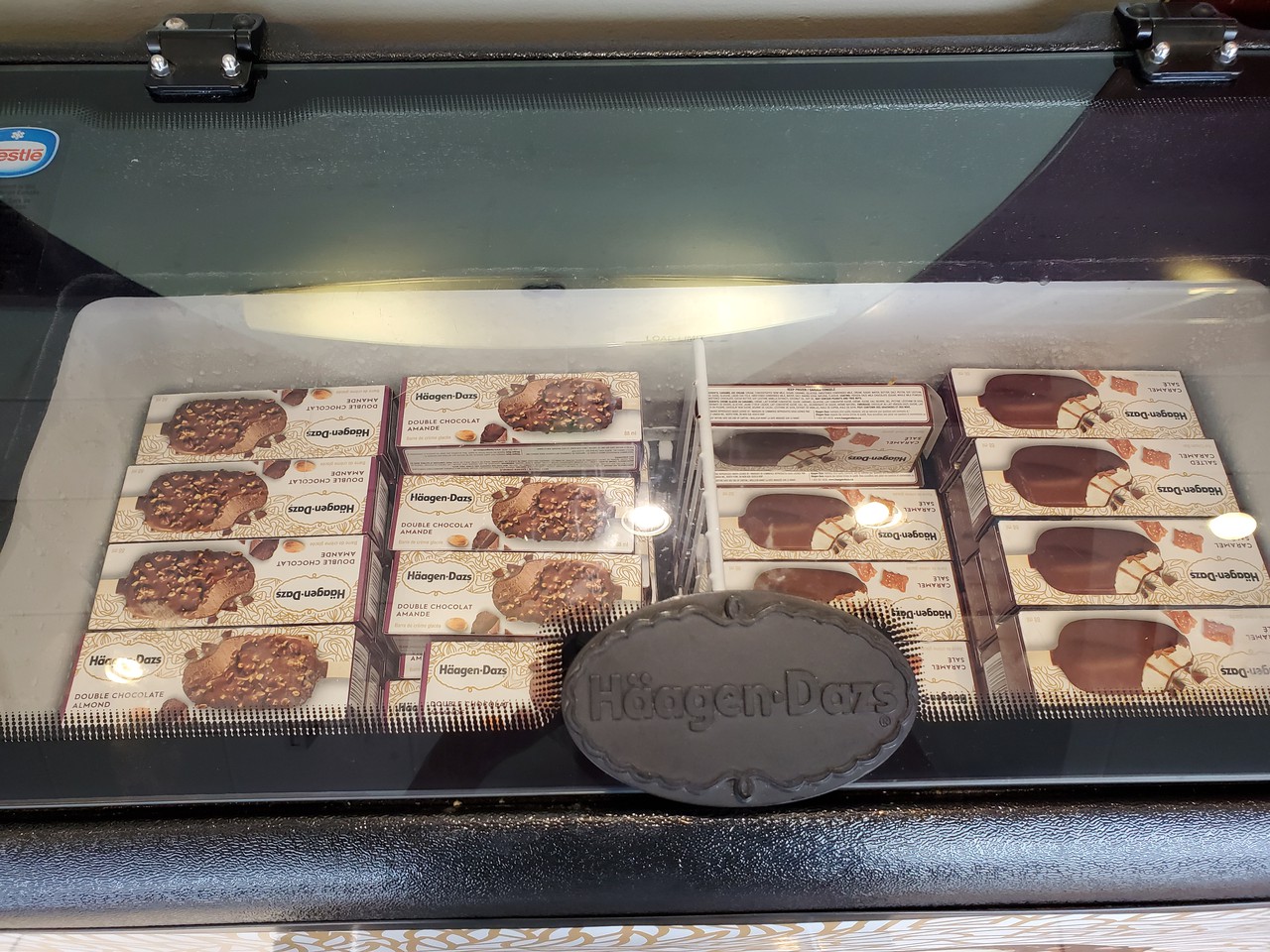 I helped myself to some bread and the Thai soup (decent), as well as ice cream and some cookies. All of them were fairly decent, good enough for a domestic layover. 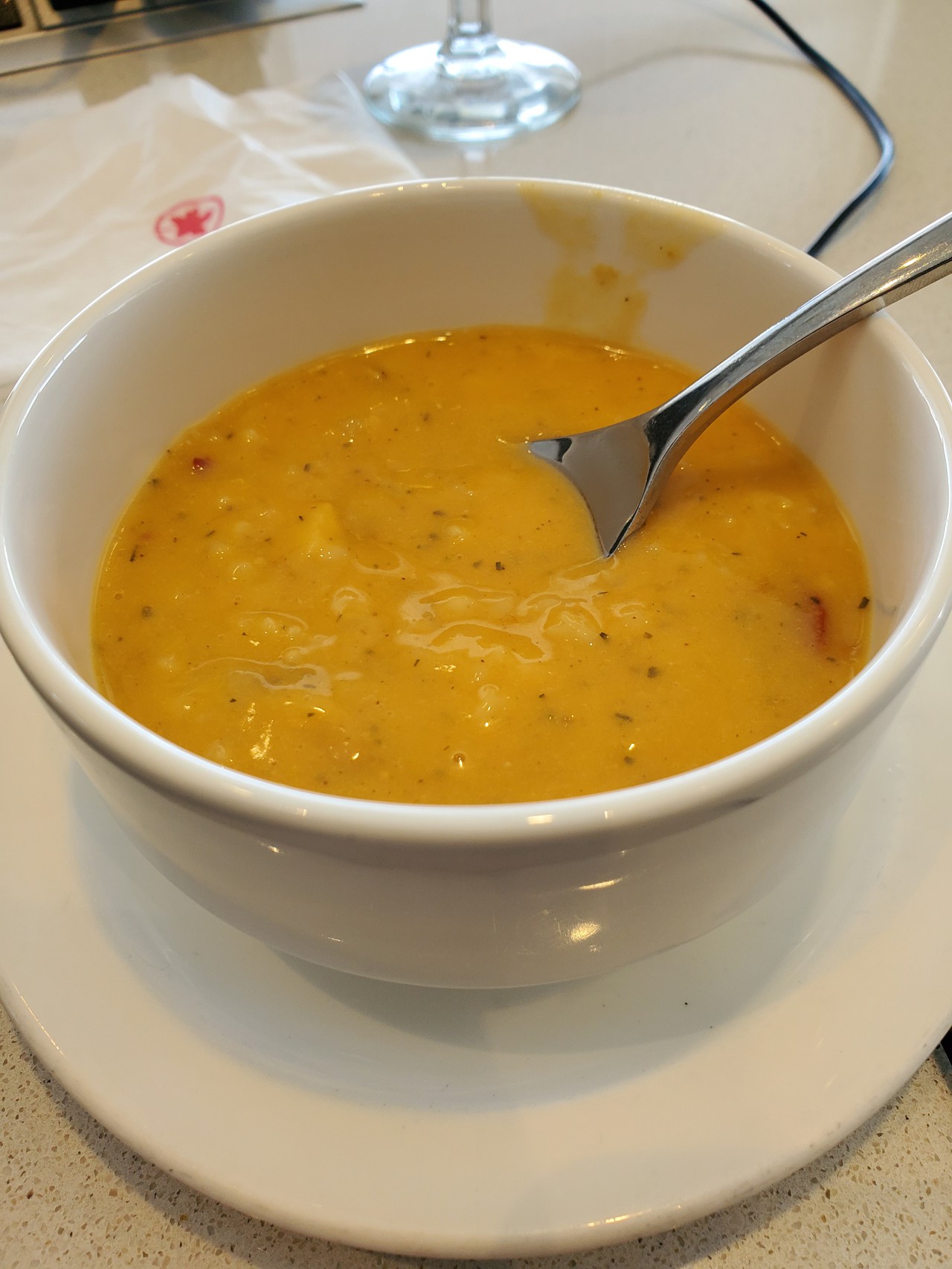 The best part of the lounge was the unobstructed view of the tarmac. 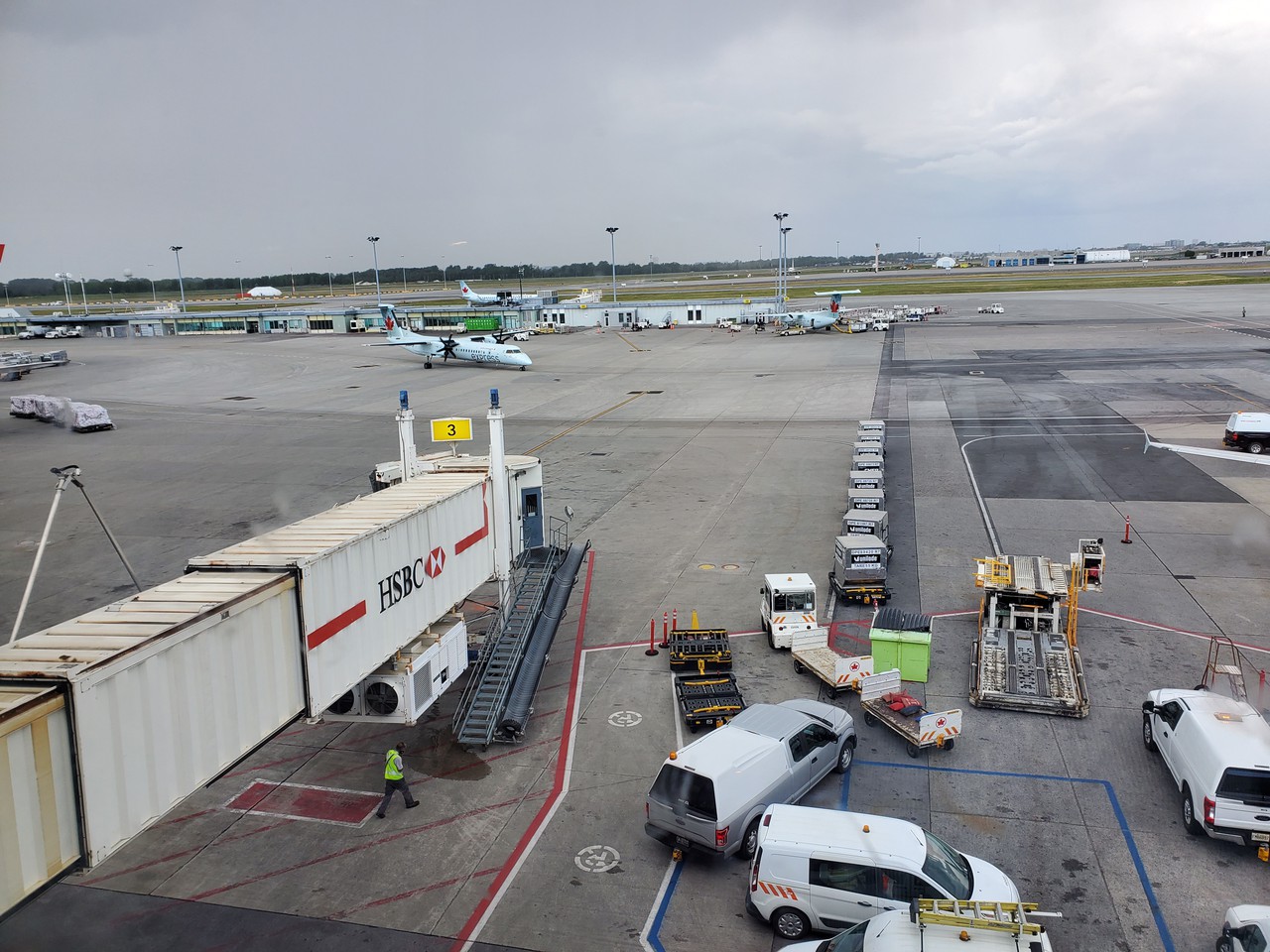 It has been a long time since I've flown a turboprop - should be fun for a short hop. Here is our chariot, C-GGNW, a 7-years old Dash 8 Q400. 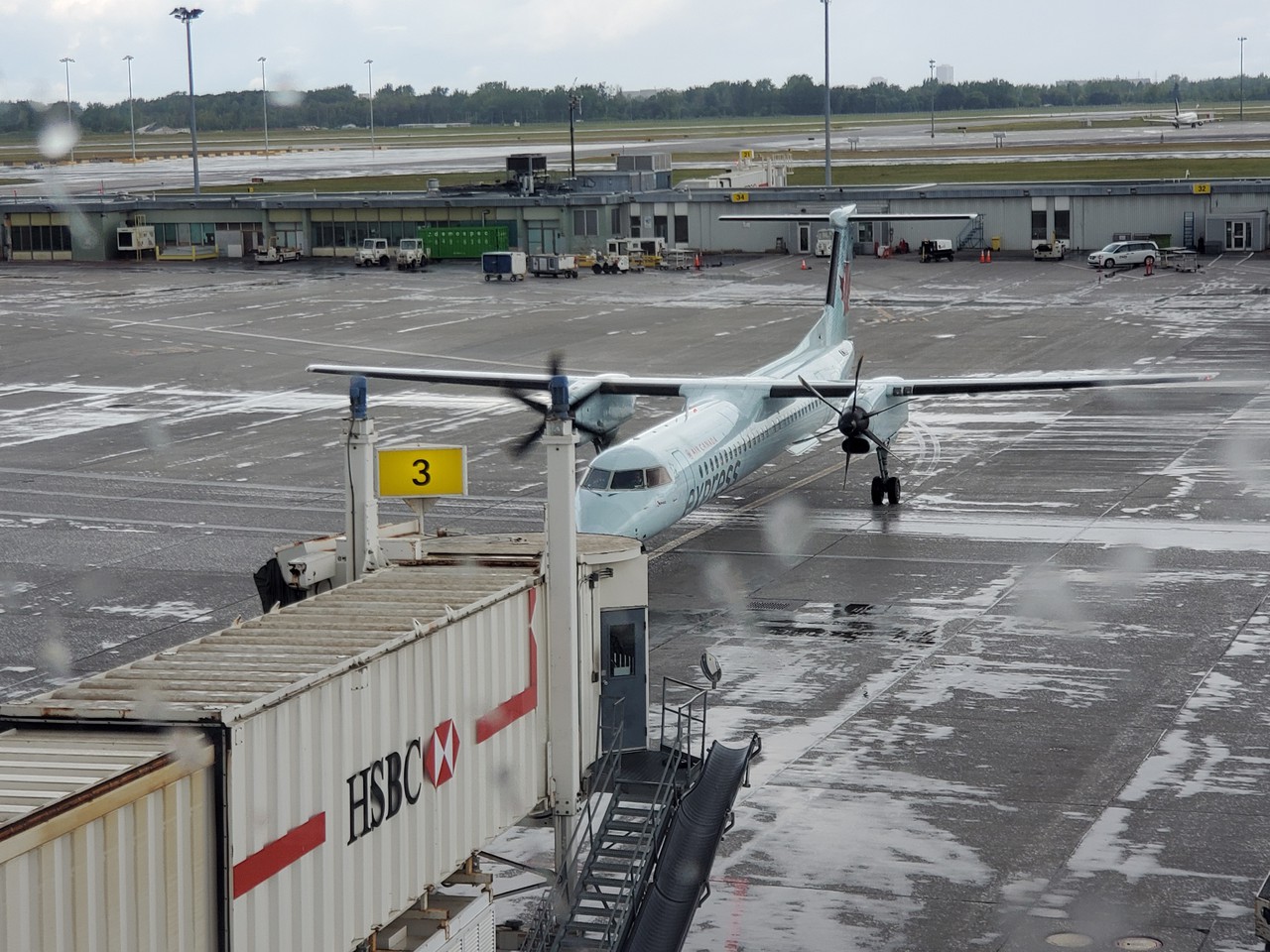 We had a very odd delay. Boarding was supposed to start at 3:00pm, but the incoming aircraft did not arrive at the gate until about 2:55pm. Then there was an issue with the gate and it took nearly 40 minutes for the ground crew to manage to lower the gate to accomodate the Q400. I've never encountered this personally before. After that, apparently it took a while to find the cleaning crew. Overall, we were delayed a little over one hour this way. 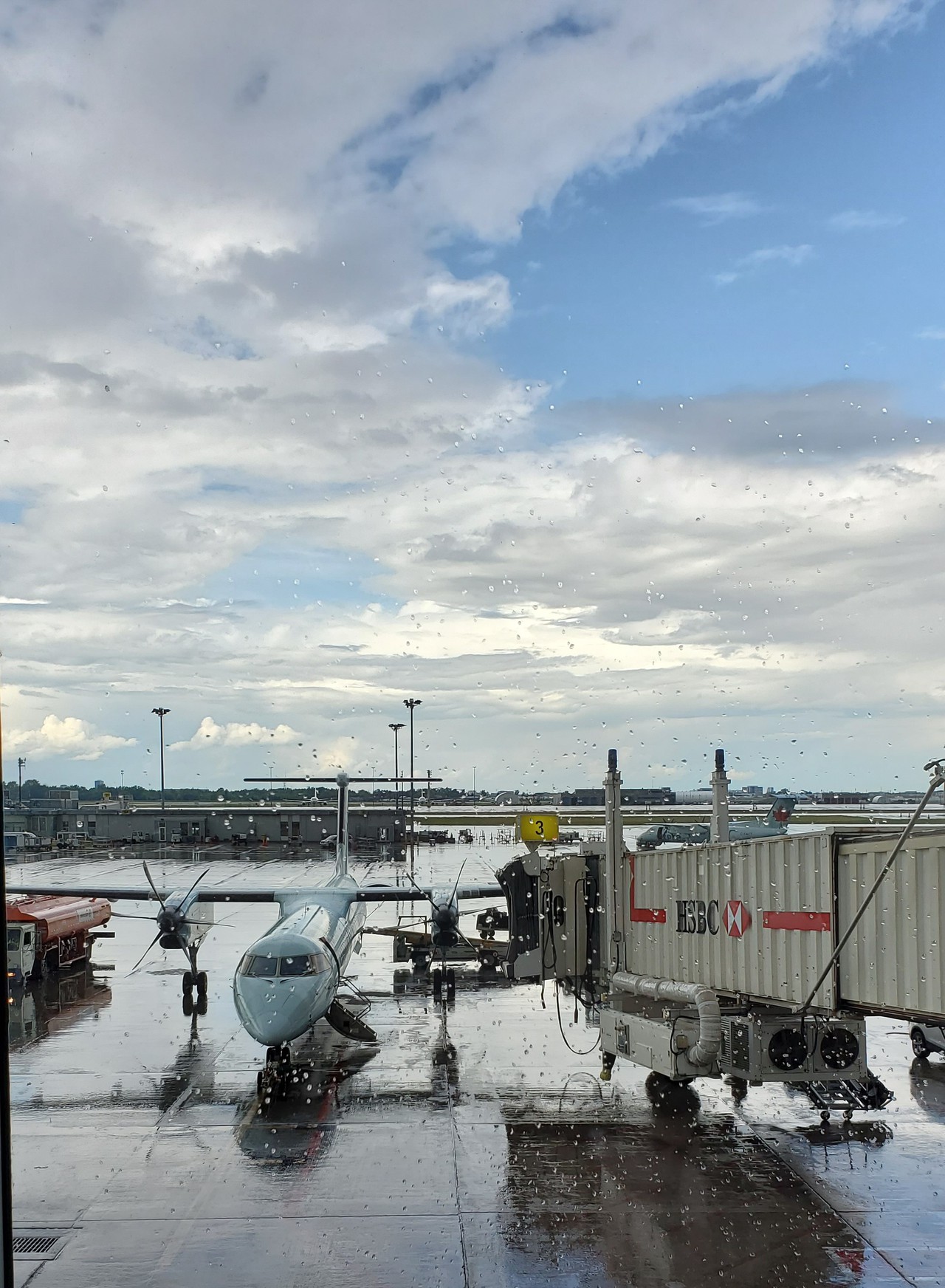 The Q400 is a small plane with a single cabin, arranged in a 2-2 layout. The seats themselves weren't too bad - decently cushioned. There are no IFEs nor power outlets; though, that's to be expected. My seat was 18D, the starboard aisle seat in the third-to-last row. 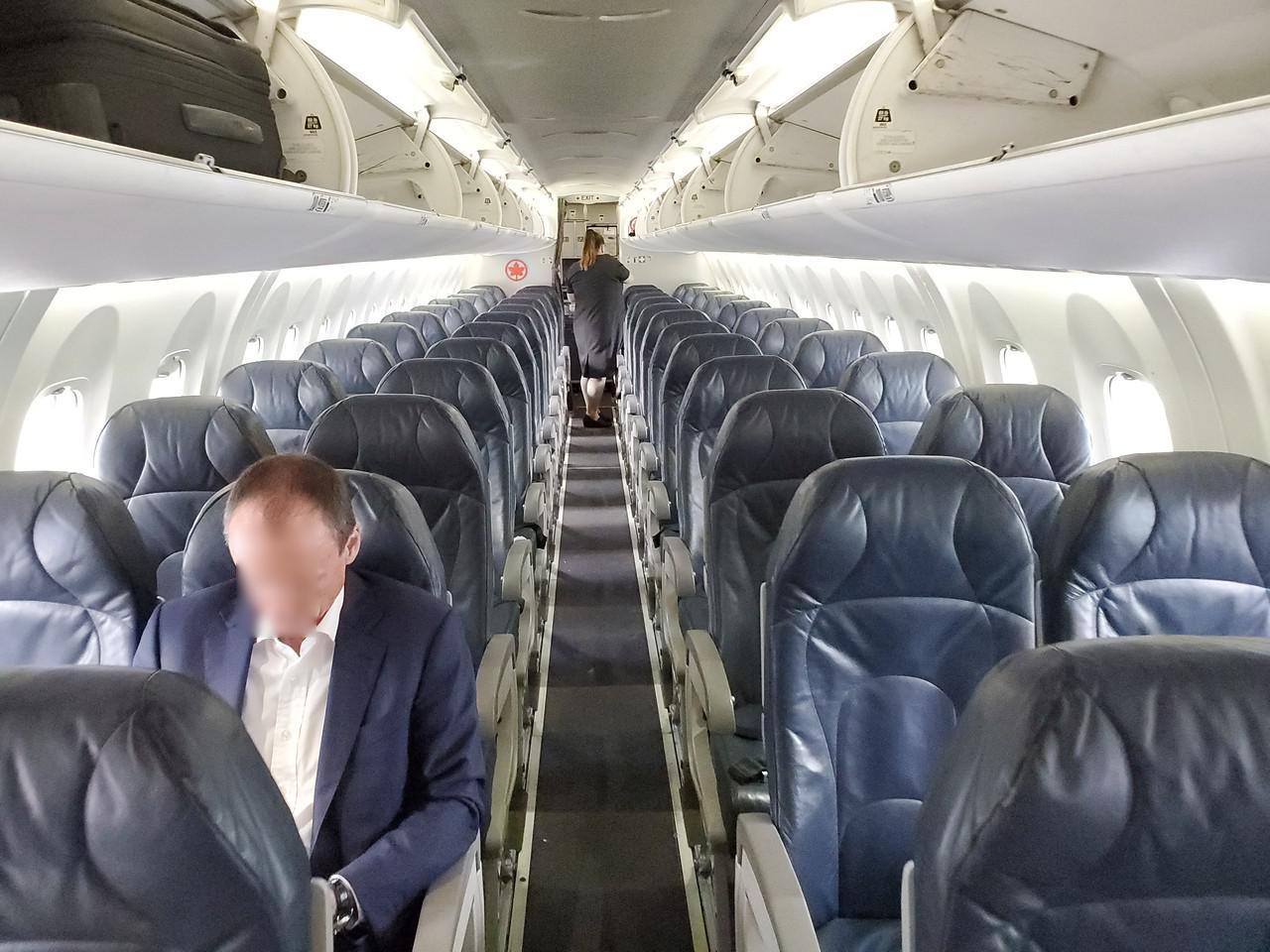 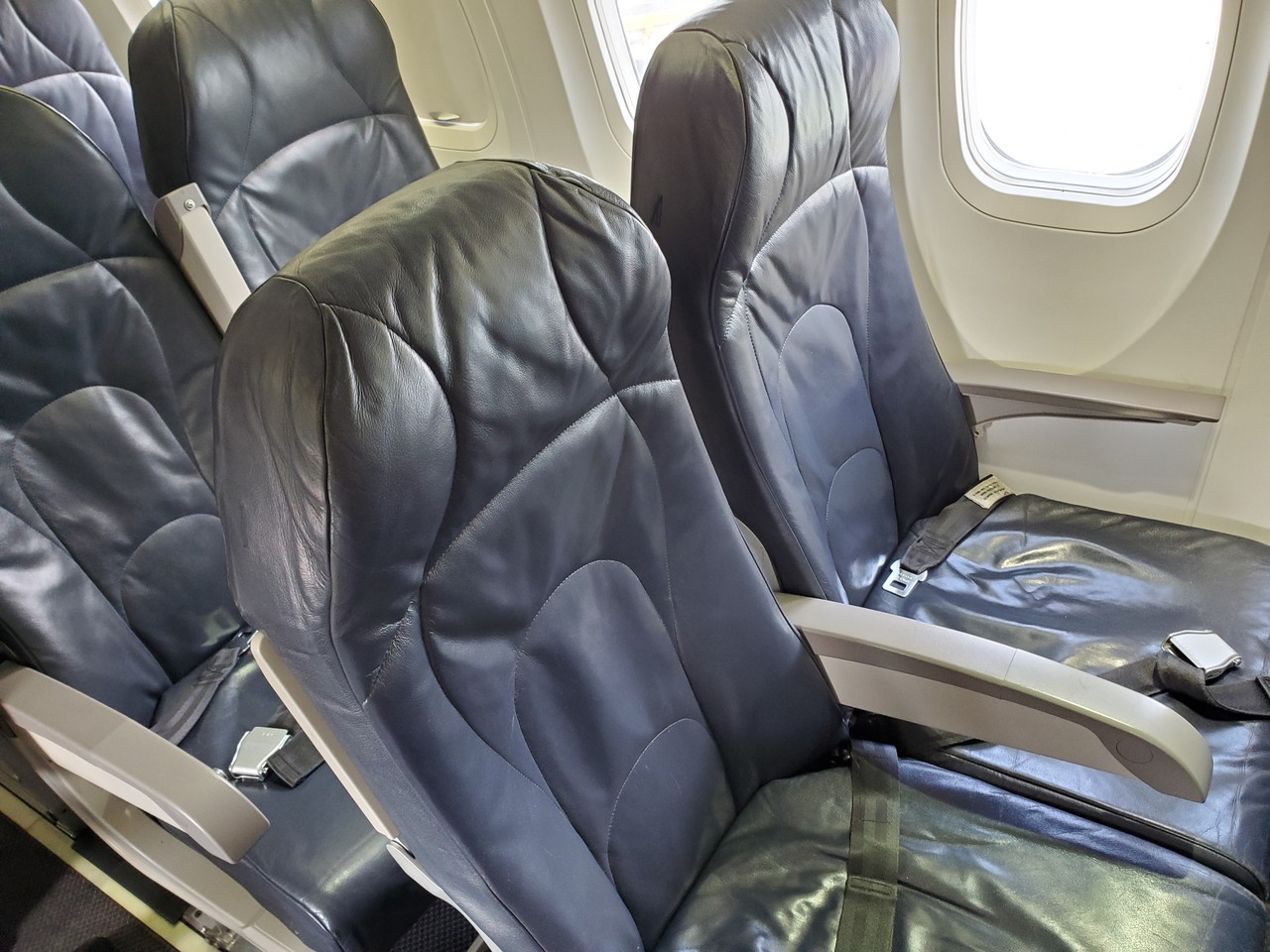 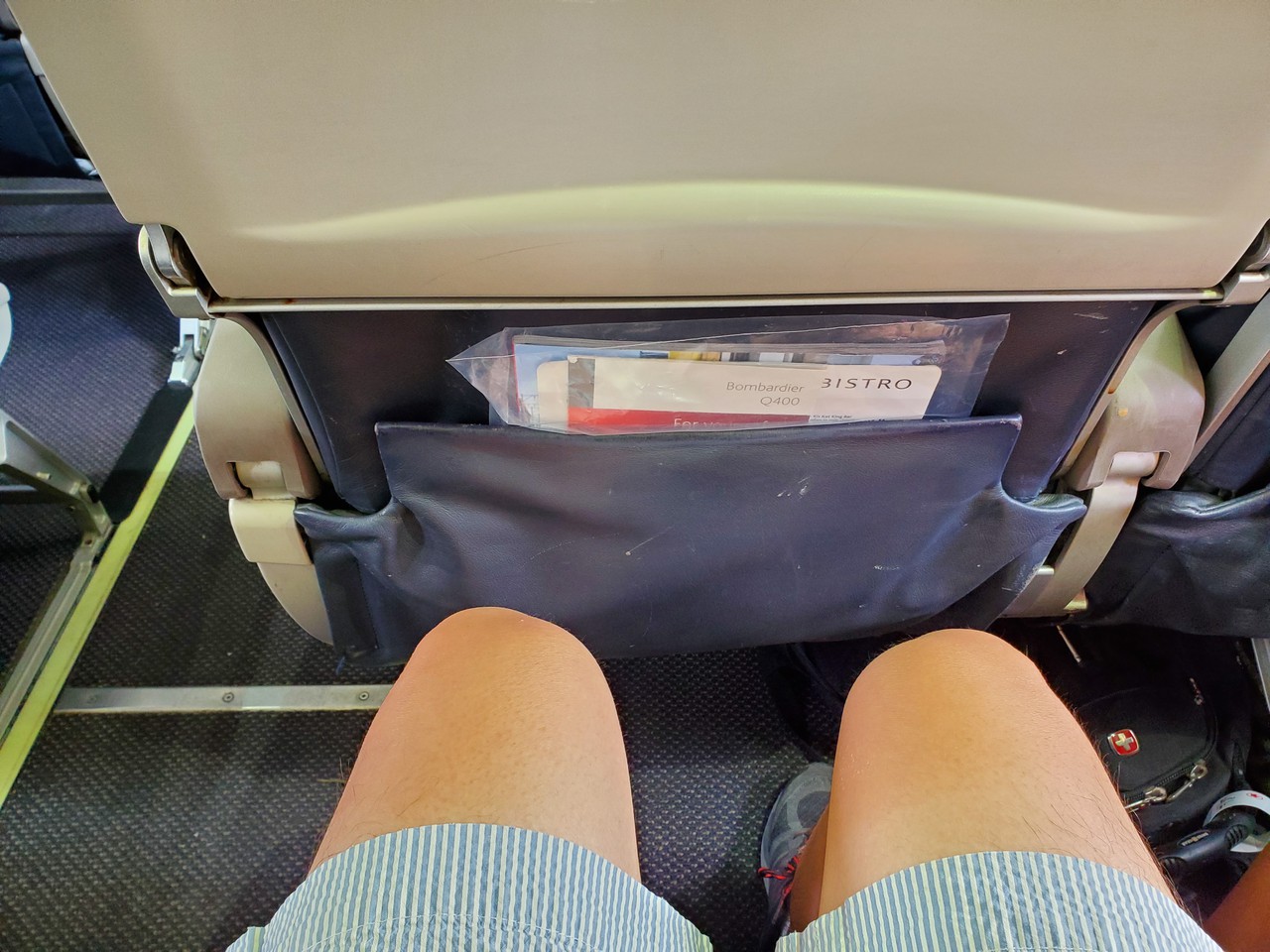 You can catch a glimpse of the back of the engine from row 18. 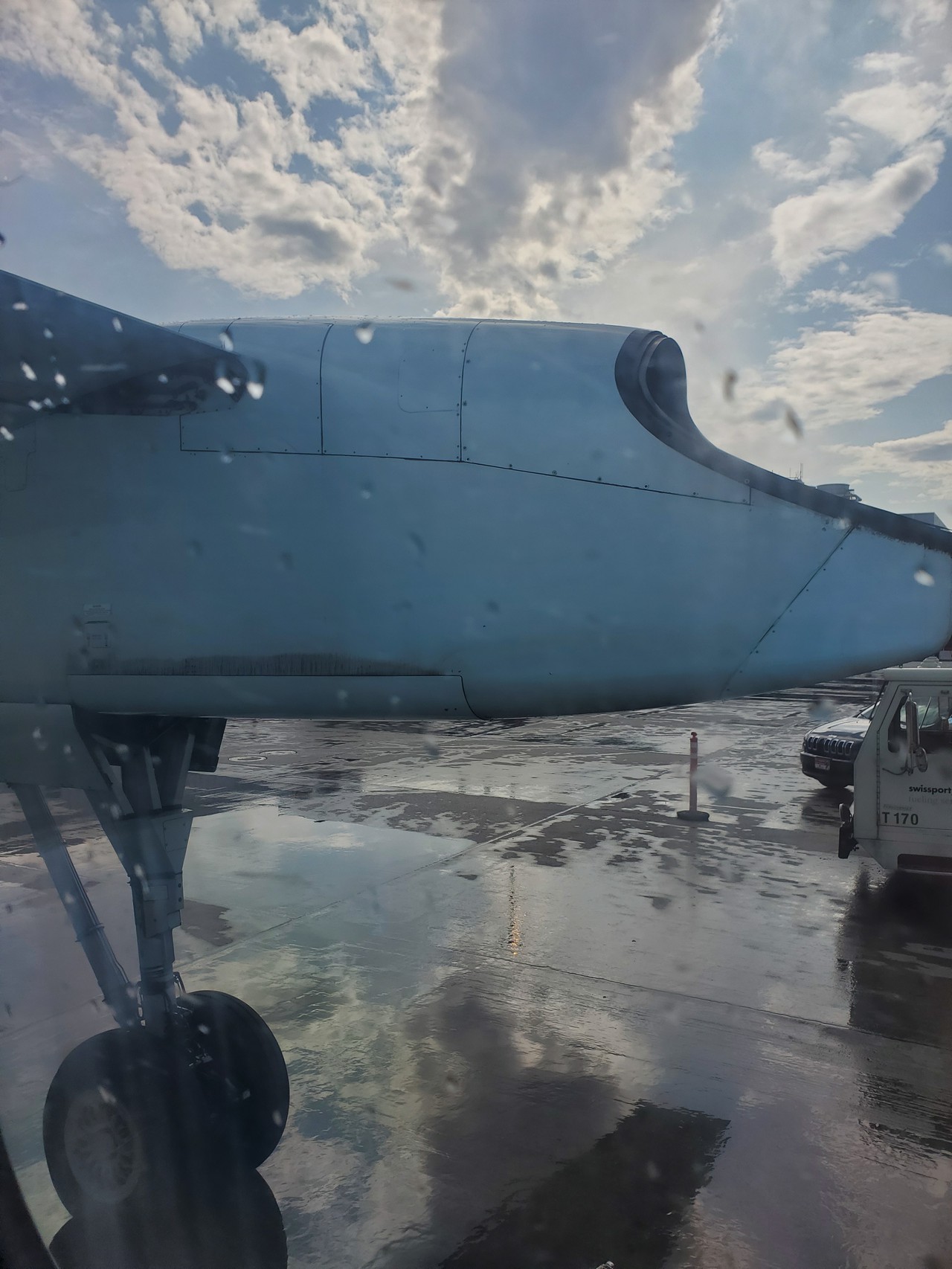 There was a further delay after an efficient boarding as we were waiting for a tug. The captain was good at keeping us informed about it and soon enough we pushed back at 4:23pm.

After taxing for a while, we took off at 4:35pm and service began around 15 minutes later. Air Canada had a very nice snack basket that I unfortunately did not take a picture of. There was a selection of different chocolate bars, chips, pretzels, and various other snacks that I did not recognize. Delta loyalists may brag about their choice of snacks, but Air Canada's snack basket blows Delta's choices out of the water. I opted for a Kit Kat bar and asked for a cup of tea. Throughout the flight the flight attendants were very kind and always smiling - hard to find that in the U.S. 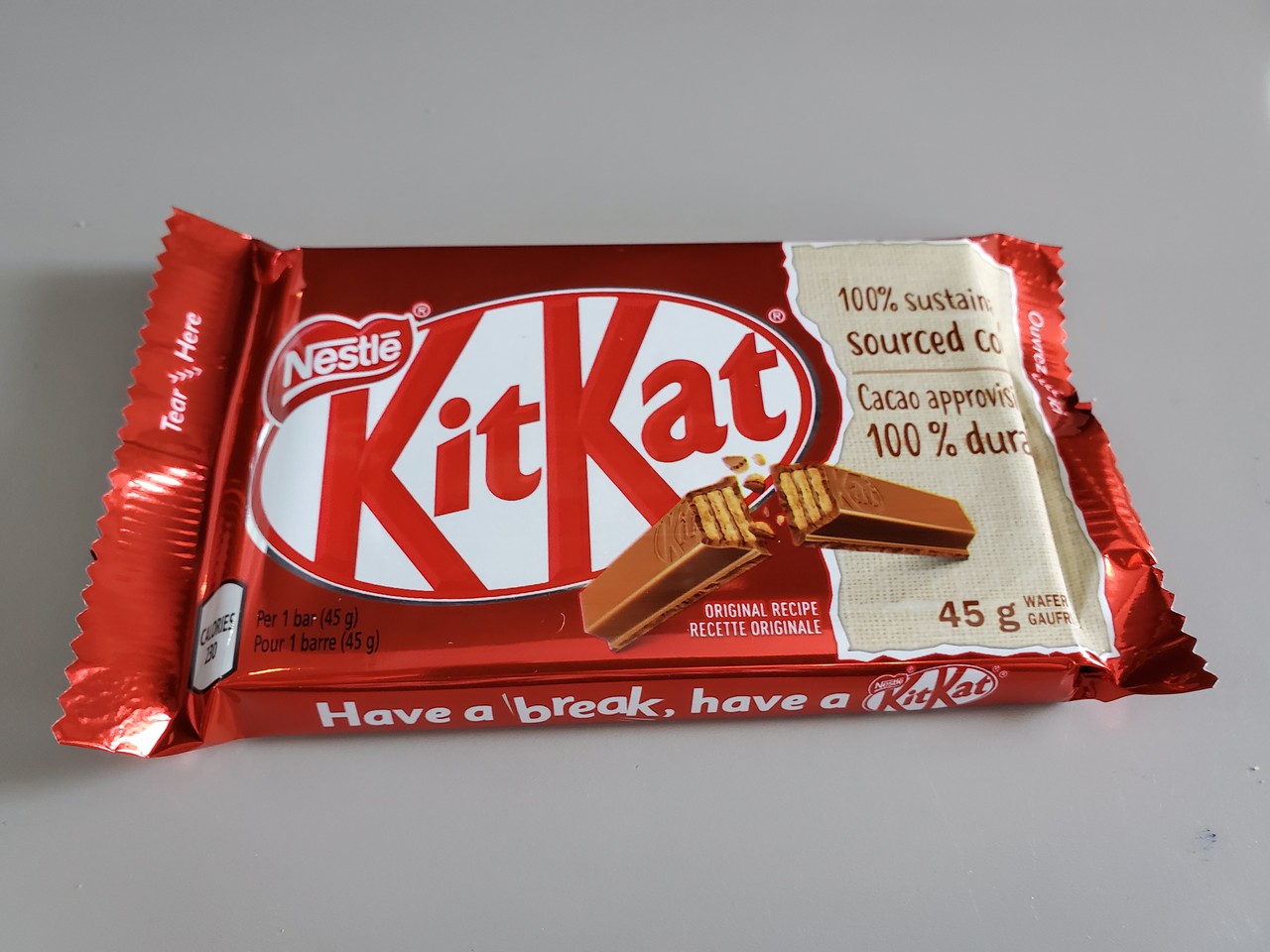 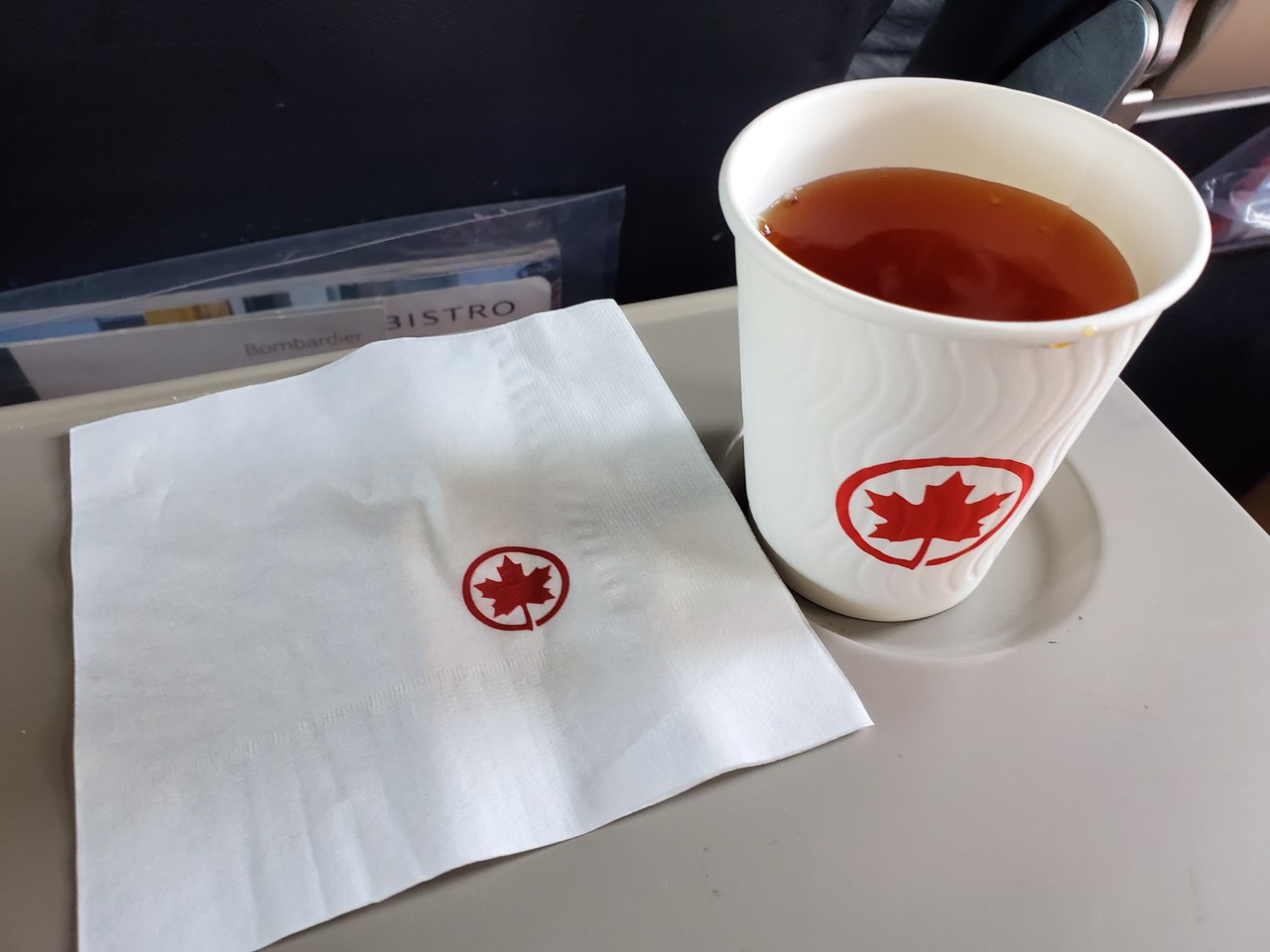 We began our descent at 5:20pm and touched down at 5:36pm. We were at our gate a short 3 minutes later. Billy Bishop may be the most convenient urban airport I've ever been to. After walking through the underwater tunnel to Toronto, it was a short 12-minute walk to our AirBnb.

It was such a short flight, but I enjoyed my first flight with Air Canada. The delay was unfortunate, but we were kept informed of what was going on the entire time.

Lounge: The Domestic Maple Leaf Lounge is decent for a short stay as Wifi was fast and the food good for a quick snack. Any longer, however, and it becomes less comfortable because of its small size, lack of outlets, and lack of many hot food options.

Cabin & Seat: The Q400 wasn't nearly as cramped as I had feared. Other than that, there's nothing to say about it.

Service: The flight attendants were welcoming and always smiling, service was efficient - can't ask for more on such a short flight

Meal & Catering: Air Canada has an excellent snack basket - easily the best in North America, though catering cannot compare to most Asian carriers on short flights.

Bottom Line: Air Canada has a fine domestic flight. I'd love to try them out sometimes for an international flight.

The contributors of Flight-Report published 12 reviews of 3 airlines on the route Montreal (YUL) → Toronto (YTZ).

The airline with the best average rating is Porter Airlines with 7.6/10.

He wrote 56 reviews about 17 airlines and 37 airports.