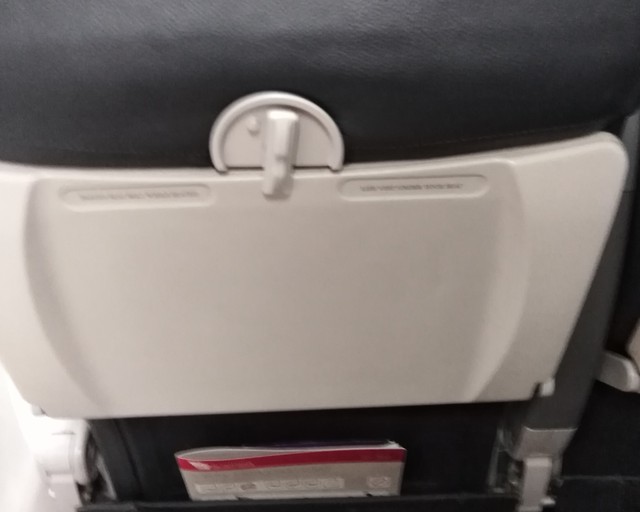 I had just booked a last minute ticket to fly on Qantas' Boeing 747-400ER on a rare domestic sector from Brisbane to Sydney. However, I needed a return flight for the same day as I had an early start at my job the day after the flight. After considering all my options I realised I had not flown on the Virgin since their Virgin Blue era (2001 to 2011) and immediately decided to book with them and experience their award winning service to see what all the hype was about. To allow for some plane spotting between flights and cheaper evening fares I selected VA989, the second last departure of the night with VA to Brisbane. The standard economy ticket cost me a reasonable $135, however I was soon offered a $25 upgrade to Virgin Australia's Economy X by Virgin's own booking app. Being an avgeek and wanting an excellent engine and wing view I immediately accepted this offer and upgraded.

The benefits of Economy X are as follows:
- Improved legroom over standard economy seats.
- Priority boarding and de-boarding from the aircraft.
- 675 Velocity Points when buying a ticket over the usual 500 you receive when booking an economy ticket.

SYDNEY AIRPORT TERMINAL 2:
Happy with my purchase I arrived at the airport for my flight by Uber around two hours before the flights scheduled departure time.

Virgin Australia operates out of Sydney Airport's recently refurbished Terminal 2 which is home to all domestic airlines with the exception of Qantas and QantasLink. Virgin operates out of the East Arm of the terminal, with the West Arm reserved for Tigerair and Jetstar with regional airlines like Rex, FlyPelican and Corporate Air operating from remote stands on a lower level of the terminal.

After checking in using a self serve kiosk, which was a bit dated and felt like I was using Windows XP, I received my boarding pass, which interestingly does not mention Economy X anywhere: I then headed through the chaotic security area, which is my only complaint about Sydney's Terminal 2. The security guards were rude and abrupt for no particular reason and the security lines were long. Something that further annoyed me was that Virgin Australia states their Economy X fare includes 'priority security screening'. However soon another line was opened up and I was on my way downstairs to find my gate which disappointingly did not include a window and VH-VUP, the 2004 built Boeing 737-800 I would be flying on was completely obstructed from view!

BOARDING:
Boarding began right on time at 1900 local time, ready for our scheduled 2000 departure time for Brisbane. Business and Economy X passengers, as well as Velocity Platinum and Gold members were immediately called for boarding through the priority lane. I was only fourth in line and was soon onboard the Boeing 737 aircraft where I was greeted by the friendly male Cabin Manager who looked after Business class throughout the flight, as well as making the PA announcements. One interesting note about Virgin Australia is after a 2019 passenger survey they have stopped the Captain's PA announcements during all flights, this routine announcement was notably absent aboard my flight.

CABIN AND SEAT:
Upon entering the cabin, there was a feeling of excitement and fun, probably because of Virgin's signature purple mood lighting, red trim on black seats and 'The Weekend' by Michael Gray playing as boarding music. My seat 5A, an Economy X window seat, was noticeably a bit dated but very comfortable. I estimate the legroom to be about 33 inches, a significant improvement over the standard economy legroom of 30 inches, which was great for me as a person over 6ft tall. 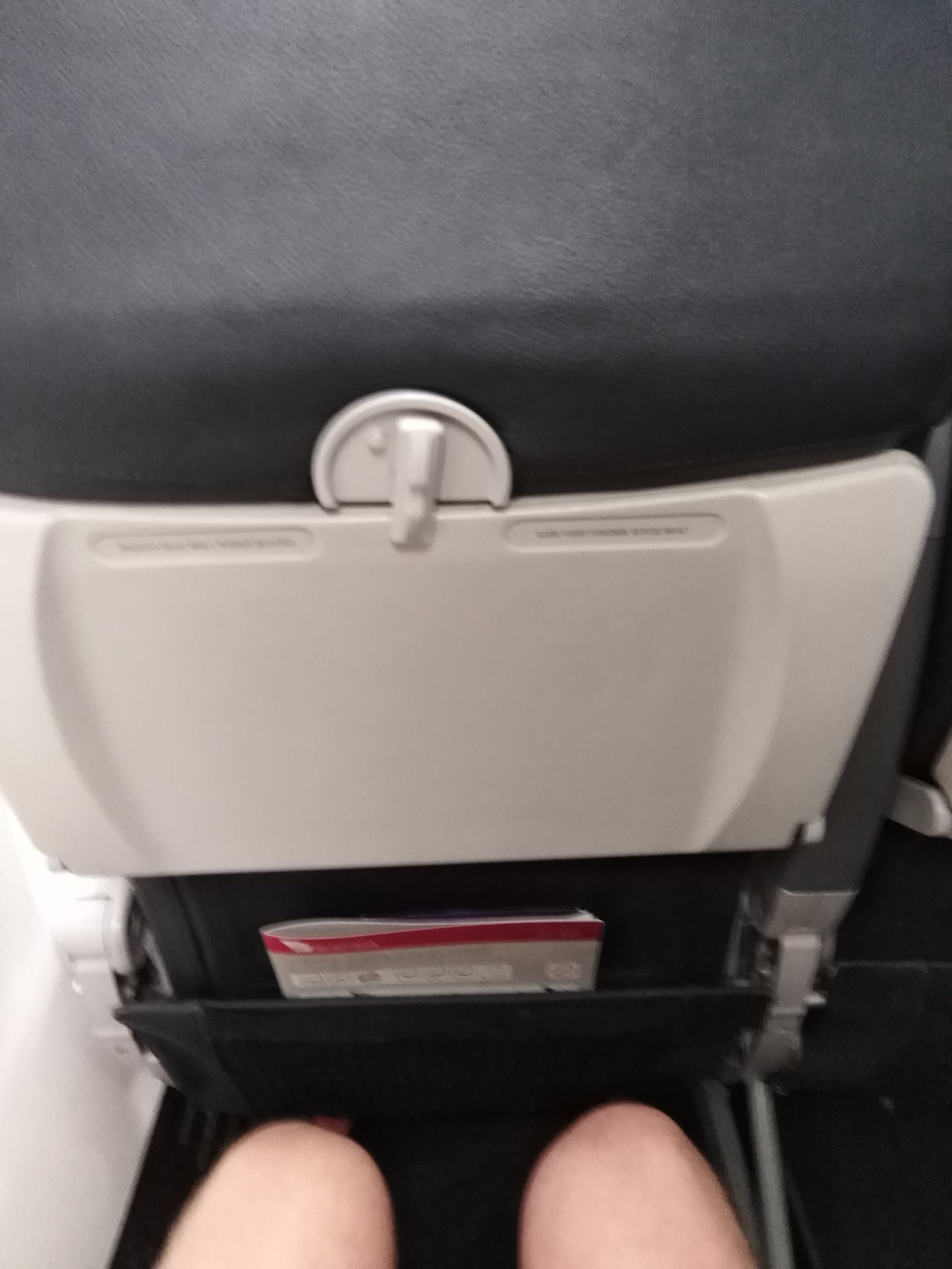 The age of the seat is demonstrated below by the old-school audio entertainment system: (I was not travelling with headphones so I did not bother to try it out). 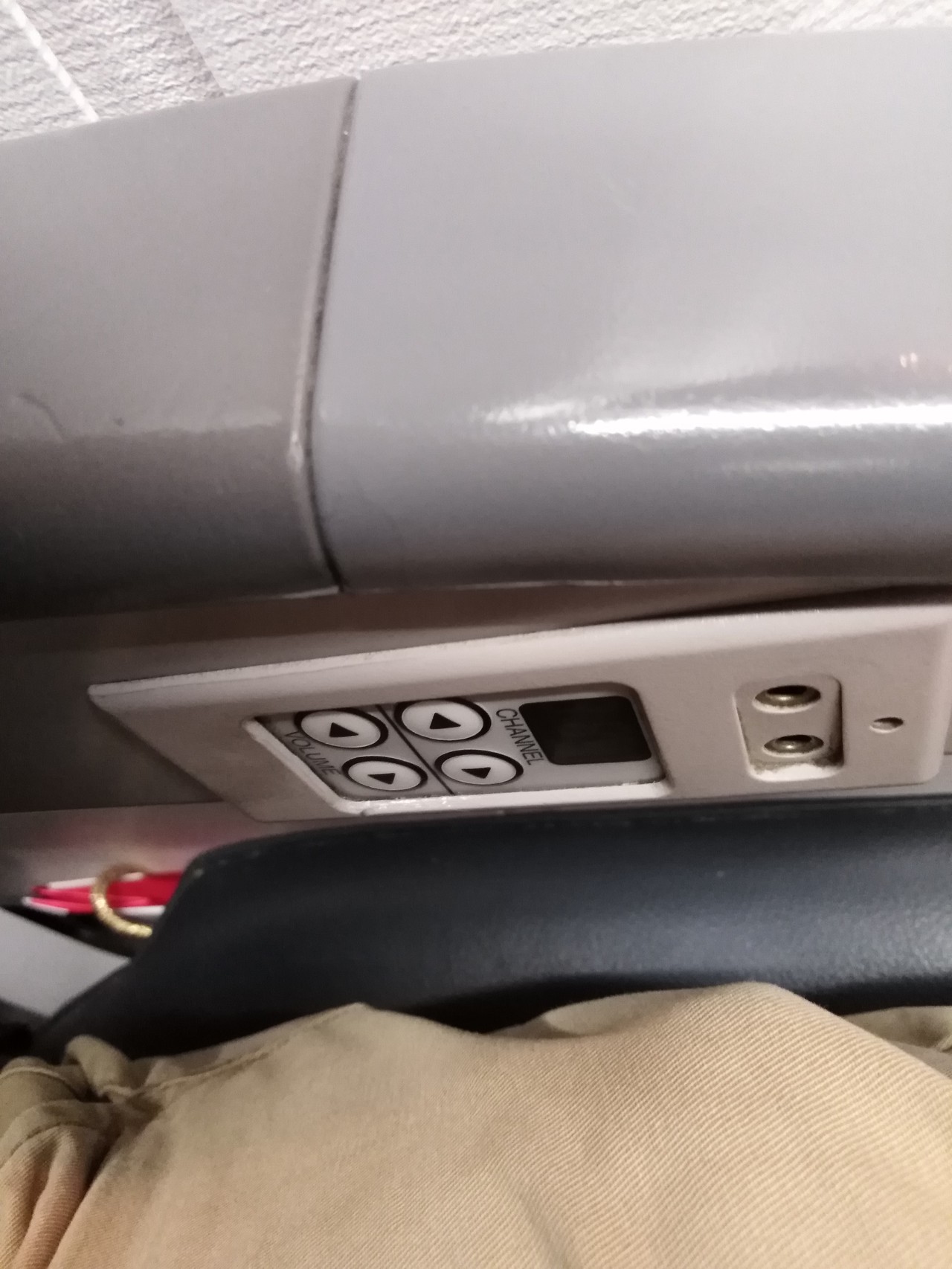 Noticeably, the seat is missing a seat-back entertainment screen because like Qantas on it's narrow-body aircraft, Virgin Australia provides stream to your device entertainment through their excellent app. Free wi-fi is also provided onboard, I used this service to track my flight on Flightradar24.com throughout the duration of the flight. Another thing to note is that the free wi-fi was also very fast compared to internet provided on some carriers.

DEPARTURE:
A view from the window of other Virgin Australia aircraft at Terminal 2 during pushback: 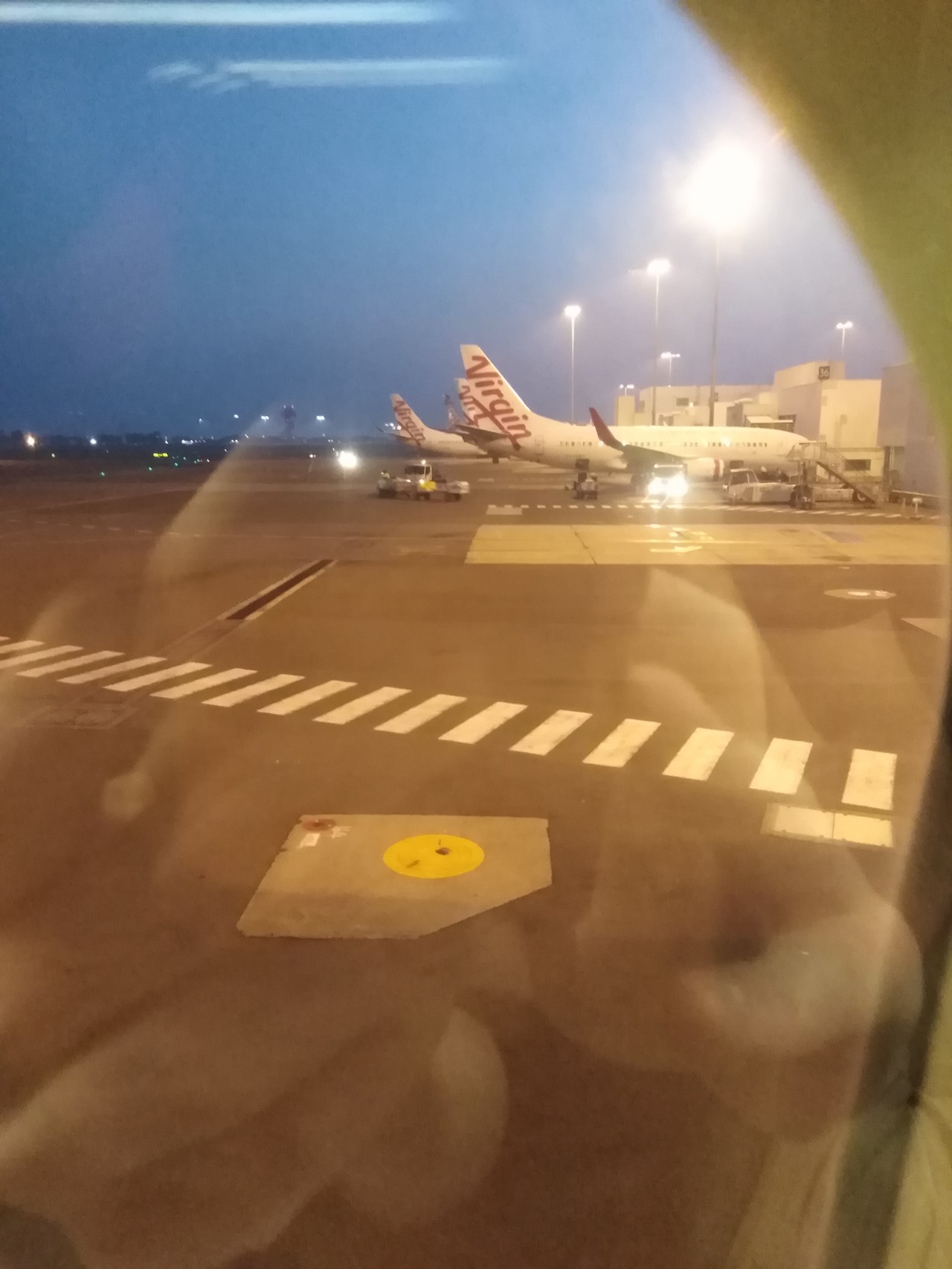 We soon were pushing back and were instructed to face tail north by Sydney's Air Traffic Control. Here is another view of the engine and wing during pushback, this view is the reason I love seat 5A on the Boeing 737 and Airbus A320: 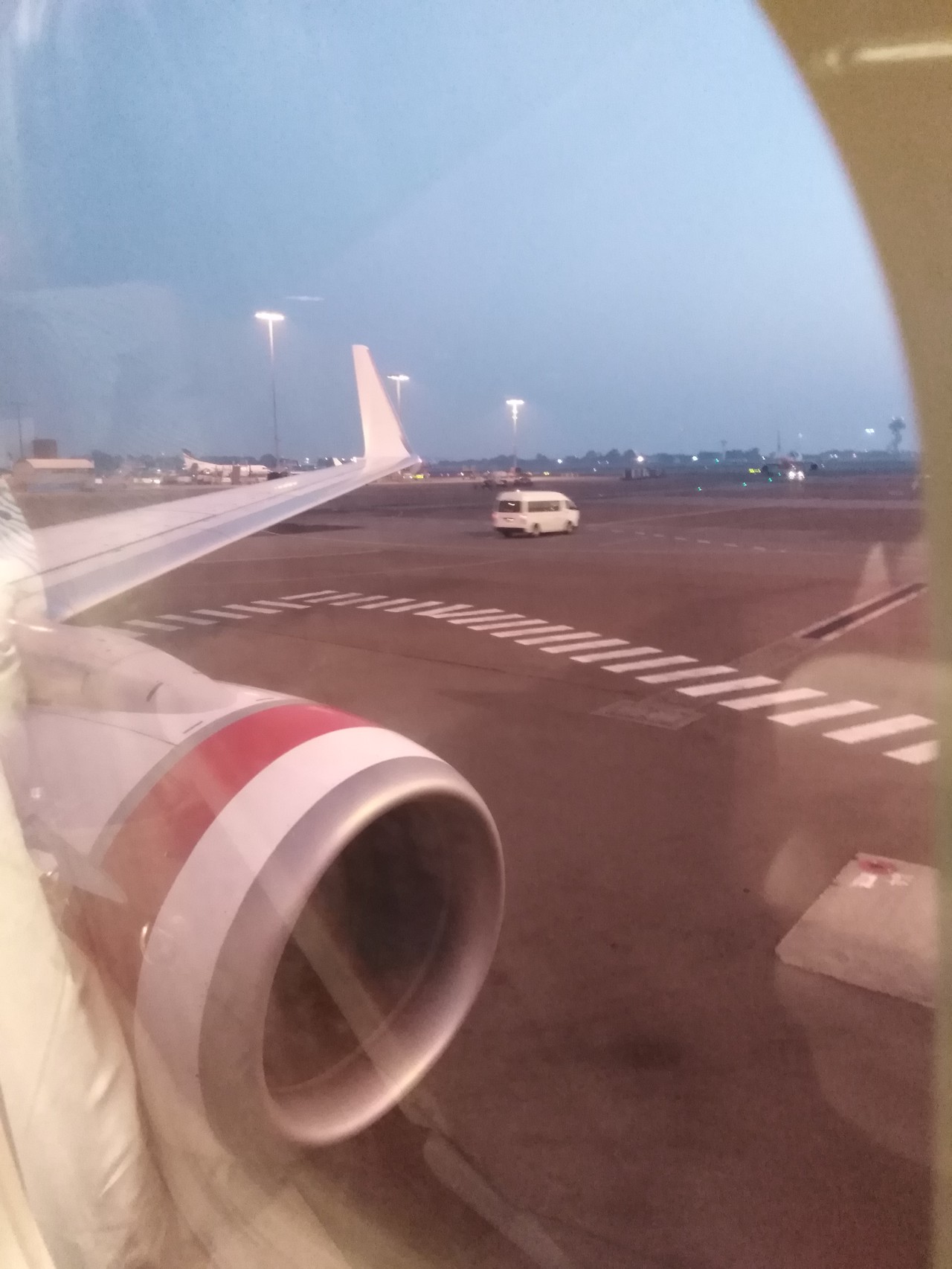 We then swiftly taxied towards Sydney's 'third runway', Runway 16R/34L, following the longest domestic taxi route in Australia before the aircraft lined up on Runway 16R using Taxiway Tango 6 for a roaring full-length departure off the runway and a steep bank right to leave the lights of Sydney behind and follow the coastline to Brisbane. I must add, I was very impressed by the buzzsaw sound of the CFM 56-7 engines.

Here is a view of Sydney taken shortly after departure, this is why I love to fly at night. You can just make out Sydney landmarks Central Station and Centrepoint Tower in the image: 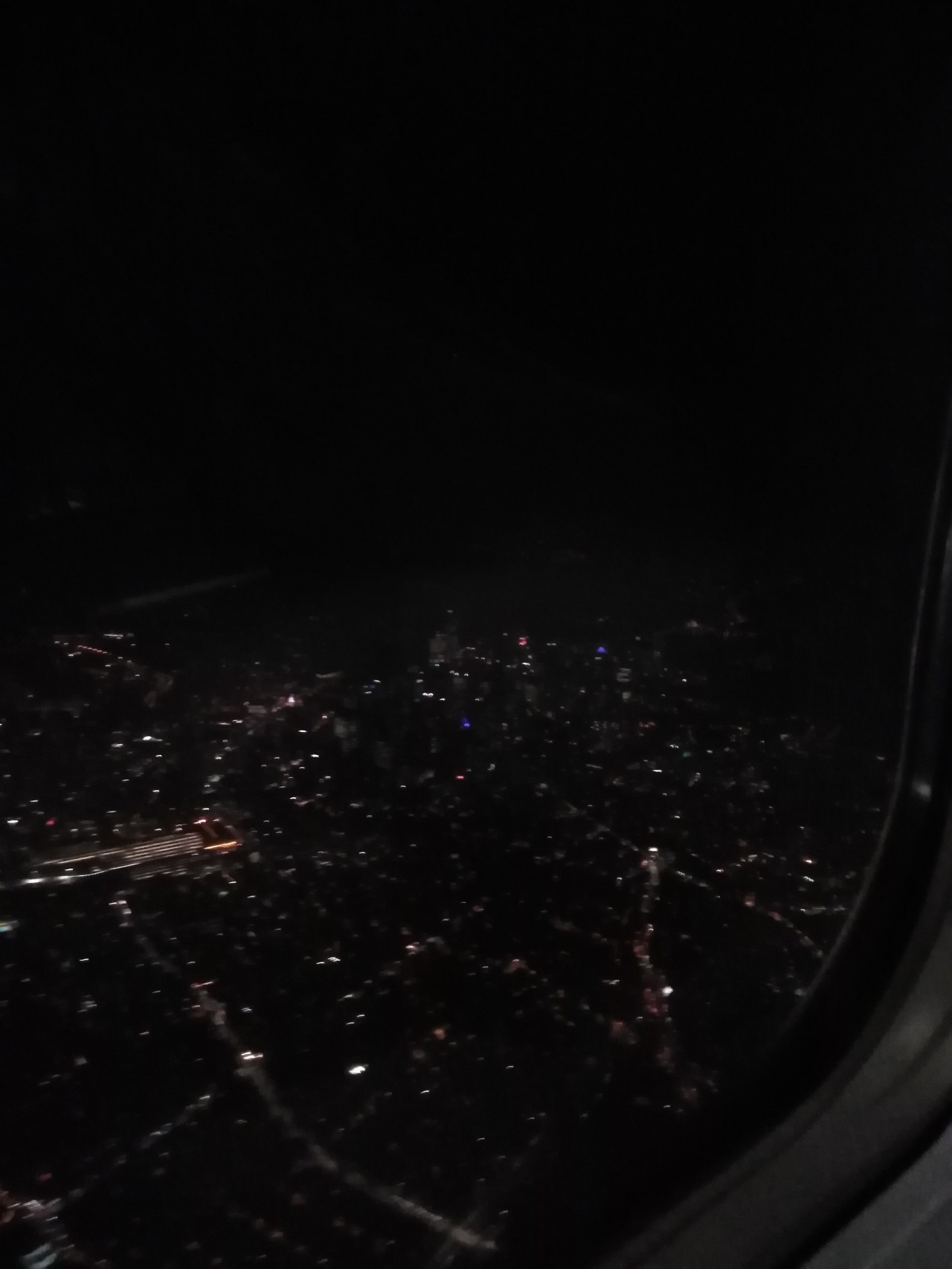 SERVICE:
On domestic flights below 3 hours in length Virgin Australia only provides a snack and drink service, which I think is completely adequate for a flight of this length in Economy class. For the drink service you have a choice of water, juice, tea or coffee. Tonight's provided snack was a packet of Cheese Popcorn, and I chose water as my drink, having already had juice and Pepsi that day. 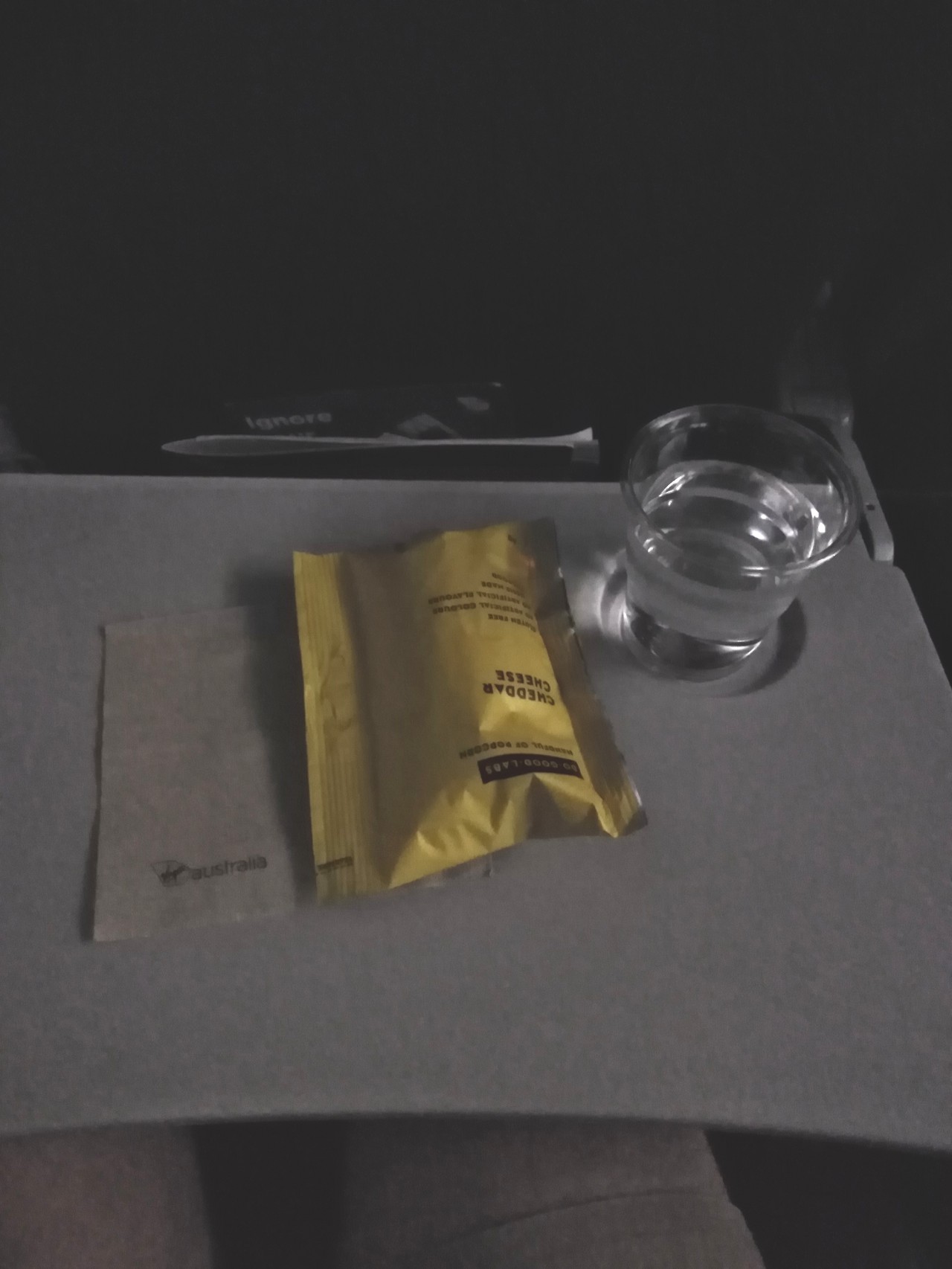 All other beverages and snacks other than the provided snack and drink must be purchased from Virgin Australia's buy-on-board menu which I mentioned above. Overall, the popcorn was surprisingly tasty and I appreciated the friendliness of the crew, not pushing buy-on-board purchases onto passengers like similar experiences I have had on low-cost carriers. I spent the remainder of the flight reading the in-flight magazine and tracking our progress on Flightradar24.

ARRIVAL:
The Cabin Manager soon announced our descent into Brisbane Airport. We followed the Gold Coast One Alpha Arrival into Brisbane, overflying the Gold Coast Airport with excellent views of Brisbane's CBD on final approach to the airport. After a short taxi to Brisbane's domestic terminal, I met the friendly pilots in the cockpit and disembarked very impressed with my Virgin Australia experience.

OVERALL IMPRESSION:
I was very impressed with the new Virgin Australia, a full-service airline still keeping in touch with their fun origins as Virgin Blue, founded by Richard Branson in 2001. I found Virgin Australia's Economy X product well worth the extra $25 for the priority boarding and excellent legroom, even if I was not offered priority security screening as listed on the carriers website. Another note is the crew, whose genuine friendliness I was very impressed with. It's no wonder Virgin Australia won "Skytrax: World's Best Cabin Crew" award. So as a final thought, I was very happy with my Virgin Australia experience and cannot wait to fly with them again, maybe on a long-haul flight?

Thank you for reading my Trip Report. I understand this trip report is considerably low quality as I took the images on my Huawei Y6 2018 phone, however I have since purchased a Kogan 4K Action Camera which I will now use to take photos and videos on future flights. Please leave some feedback as I would much appreciate it.

OVERALL IMPRESSION: I was very impressed with the new Virgin Australia, a full-service airline still keeping in touch with their fun origins as Virgin Blue, founded by Richard Branson in 2001. I found Virgin Australia's Economy X product well worth the extra $25 for the priority boarding and excellent legroom, even if I was not offered priority security screening as listed on the carriers website. Another note is the crew, whose genuine friendliness I was very impressed with. It's no wonder Virgin Australia won "Skytrax: World's Best Cabin Crew" award. So as a final thought, I was very happy with my Virgin Australia experience and cannot wait to fly with them again, maybe on a long-haul flight?

The contributors of Flight-Report published 12 reviews of 3 airlines on the route Sydney (SYD) → Brisbane (BNE).

He wrote 3 reviews about 3 airlines and 3 airports.