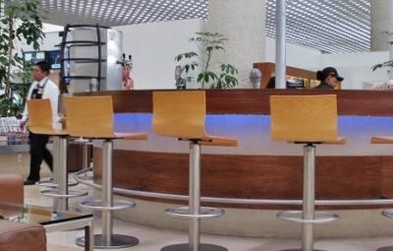 #28 out of 74 Airlines A minimum of 10 flight-reports within the past two years is required to appear in the rankings. 93 reviews

By jetsetpanda 3578
Published on 18th October 2013
During my stay in Costa Rica I went to Playa Blanca, which is a semi private and secluded beach located in Punta Leona, a rainforest reserve about 90 minutes from San Jose. I stayed in a private home there and in the morning I headed out to the beach to relax. It felt great to wake up surrounded by the impressive trees and relax in a beach all to myself.

There is more information about this reserve through this link.


Houses on top of the beach.


An intruder hiding behind the branches.


After a couple of days I returned to San Jose and spent the rest of my stay with relatives. Unable to sleep the night before, I got myself ready to go to the airport to take my flight at this ungodly hour. I don't know why AM has their only flight out of SJO leaving at this hour. It certainly cannot be for intl. long haul connections because these flights depart in the evening out of MEX.

Arrived at the airport with plenty of time and dutifully paid my departure tax at the counter before proceeding to the AM desk. There was a long line this early in the morning but it moved quickly. When I approached the AM counter, a cheerful agent at the entrance of the line inquired about my carry-on bags and made sure that they were within limitations. Her colleague placed carry on tag on the respective bags and politely invited me to join the Premier line. The agent who helped me at the counter was professional and friendly, unlike their counterparts at the AA, UA and TA counters in SJO who although professional, lacked a certain friendliness and enthusiasm. He issued my boarding passes and an invitation to the Copa lounge. I was not in the mood to go down and up so I headed straight to the gate.


Plane at the gate.


When it was time to board, I saw 3-4 agents who congregated at the gate. Elderly and wheelchair passengers were invited to board first, followed by families with children and J passengers. I greeted the purser stationed at the entrance and settled on my chair. I found the 36 (91.44 cm.) pitch tight on this 737-700. Even the lady sitting across who had 2EF for herself had to request the purser to ask the passengers in 1E to put his seat upright in order to allow her to go to the WC when we were airborne.


Pre-dept. drinks of orange juice and water were offered, and once we took off a flight attendant passed out immigrations and customs forms. There were no hot towels or menus on this flight. The purser served breakfast from the cart and the choices were omelette or crepes. I inquired if the crepes were sweet and to my surprise they were savoury. It would be nice to balance the options with a sweet or savoury choice instead of having two savoury ones. It turns out that the crepes were filled with spinach and turkey or chicken slices. Breakfast seems more generous than lunch or dinner, and the purser offered a variety of breads from a basket. I chose what looked like a croissant but actually turned out to be a sweet roll shaped like one. A muffin was already pre-plated in the tray, although I think that yogurt would have been a better replacement. The side of fruits was fresh and sweet. Personally I hate the present china pattern with the lines that AM uses for J hideous. The previous one with the indigenous motifs had more character and even the earlier version with the AM logo was better.


FA's retreated to the galley at the conclusion of the meal service and did one more round of beverage before arrival. This time our descent took us through downtown DF and it was worth having a window seat.


Once I arrived I cleared Immigrations and Customs and proceeded to the Salon Premier to have lunch. The first time I passed through here I did not have enough time to enjoy the lounge, so now I had a chance to fully make the most out of it.


AM has two Salon Premier lounges in T2, one for international and the other domestic at opposite sides. Unfortunately they are not marked as such, but you can tell by the clock locations on the wall once you are inside. As you enter T2, the intl lounge is located in the right side of the terminal so use the security checkpoint on that side to access it while the one on the left is the domestic one. I visited both and they are quite similar. However, the domestic one had a corner that was being renovated when I was there. If you are looking for a quick shower, only the intl lounge is equipped with one.

I started with the intl. one and entered through an open reception area in a circled configuration. The clerk was welcoming and upon checking my credentials, I was allowed to proceed inside. The first impression that came to my mind was the openness of the lounge with a bar complete with stools in the middle. Everything is out in the open and computer terminals were located on one side by the entrance. Restrooms are located inside which is quite convent. There are attendants hovering around who are happy to bring you anything you want. A small lounge was tucked away in a corner with a large counter and TV with stools set in a communal table. I saw an attendant set up the lunch items like soup, sandwiches and Vienna hot dogs on the counter. I also saw a spa area but did not venture inside. AM's long haul flights depart in the evening and this lounge can get pretty crowded during that time. For a hub lounge, I feel that AM could have made this place larger with more privacy.

As far as food is concerned, the options were adequate and are definitely above what U.S. domestic lounges offer. Most items were finger foods and were on the light side. Don't expect any hot dishes or elaborate desserts.


After lunch I visited the domestic lounge which was similar in layout to the intl one. As for the buffet offering, I have read reviews stating that there is not much difference in the food between these two lounges. However, this was not my experience and I beg to differ. In my experience the food at the domestic side is a downgrade from what is offered at the intl one. Choices were more limited and I only saw tortilla chips, salsa, mini turkey wraps, packaged goods and cookies on the buffet counter. So if you are hungry, eat at the intl. side.

Flight was fine and the purser attempted to make conversation with me while I was waiting in the galley for the lav. The catering was a bit more substantial than my lunch or dinner flights and I appreciated the assortment of breads served from a basket. Unfortunately the seat was not very comfortable due to the tight pitch between seats. I would fly AM if the price is right, but wouldn't go out of my way to use them. I felt that catering and crew on TA were better compared to them.

For being a hub, the Salon Premier is not as big as expected. During the evening when most of AM's long haul flights depart, the lounge can get extremely crowded. Catering inside was adequate, but quality was not the best, especially when you have little buns with Vienna sausages passing as hot dogs. The presence of waiters adds to the perception of service, but personally I prefer to grab things myself. It feels a bit elitist to be waited upon when there is a buffet available, but that is just me.