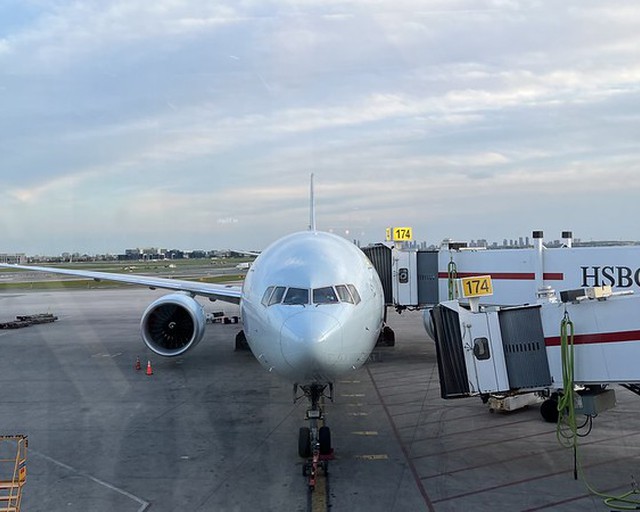 #18 out of 75 Airlines A minimum of 10 flight-reports within the past two years is required to appear in the rankings. 345 reviews

Another gorgeous day for flying. We arrived 3 hours before scheduled departure due to ongoing madness at Pearson airport and other international airports across Canada. Due to the surge in passenger traffic and people wanting to go on vacation again, all major airports were caught unprepared and could not keep up with demand. This caused severely long delays at security upwards of 2 hours minimum which started as early as 6am. If you were lucky enough to have priority access via business class or one of the Black credit cards or Nexus, then the line up took less than 15 minutes. 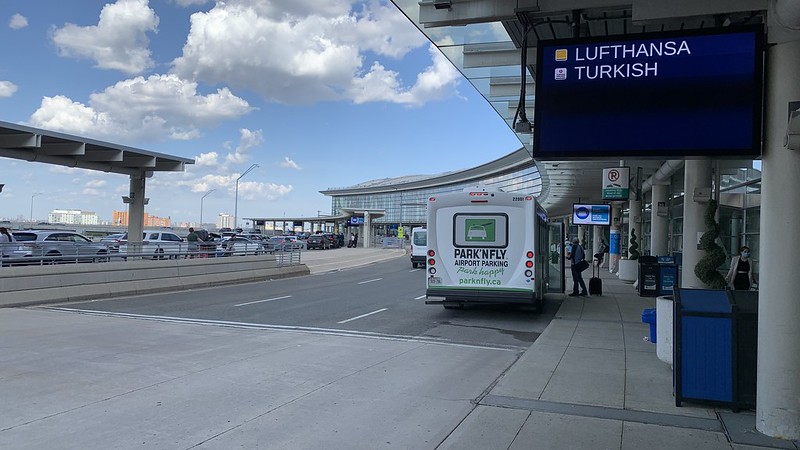 The priority check in area for Air Canada. 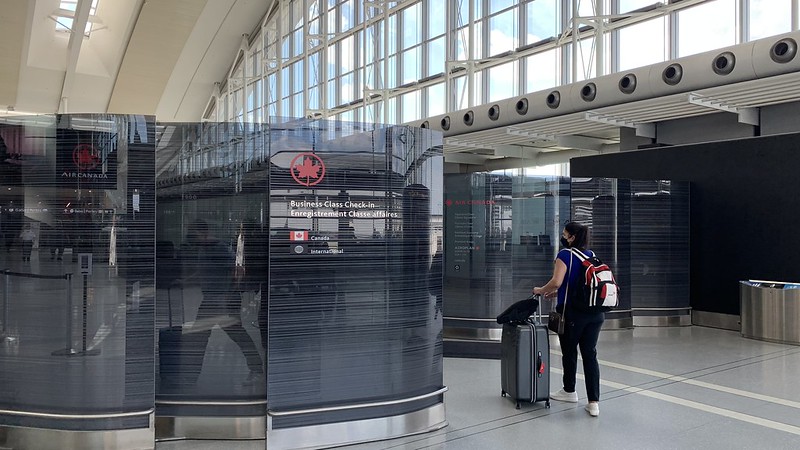 There were 3 passengers in line before us and we were called up after a 5 minute wait. Check in was a breeze with proof of vaccines provided plus an online immigration form. 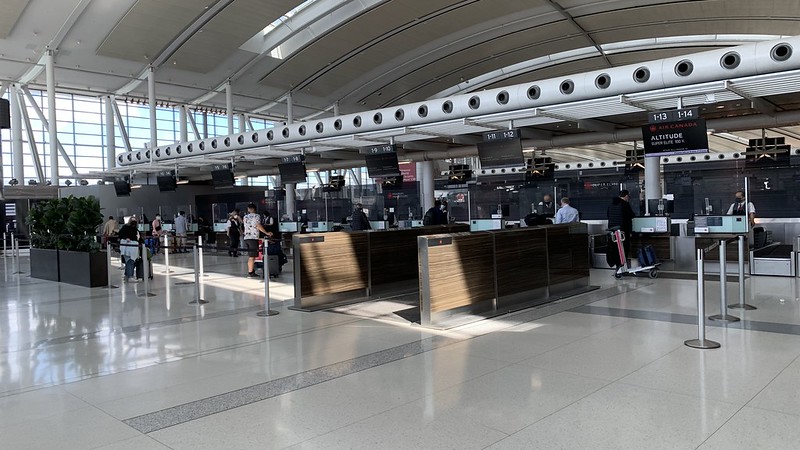 The priority security line was straight past the check in area. Got into the Nexus queue which was longer than the regular Priority queue. Eventually, a security officer came around and bellowed at the top of his voice to keep moving forward and get your boarding passes ready. Magically, the line moved quickly and we were past security in no time. 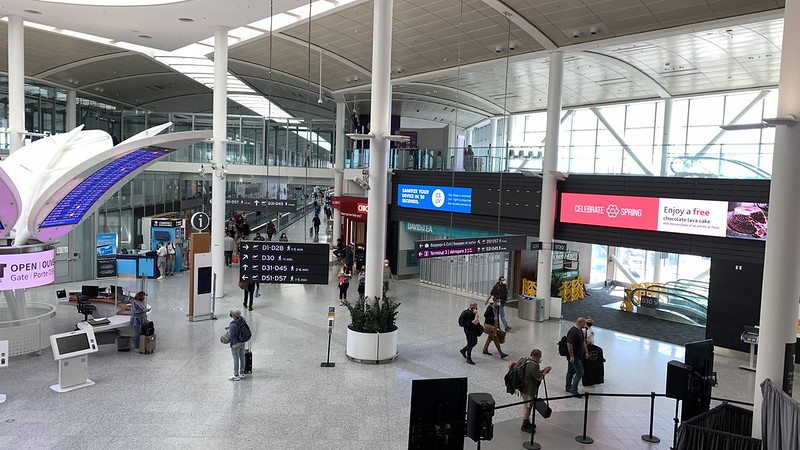 Making our way along the neck of the terminal connecting us to the outer pier of gates. 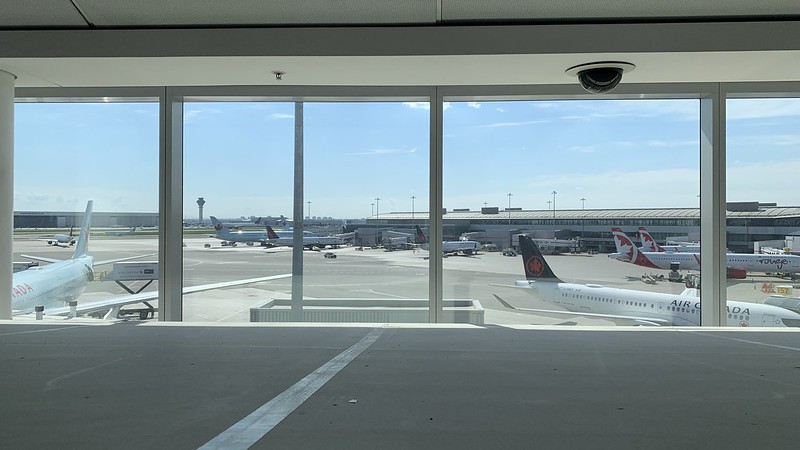 So far, everything is looking good. A foretelling of a wrench in the plans. 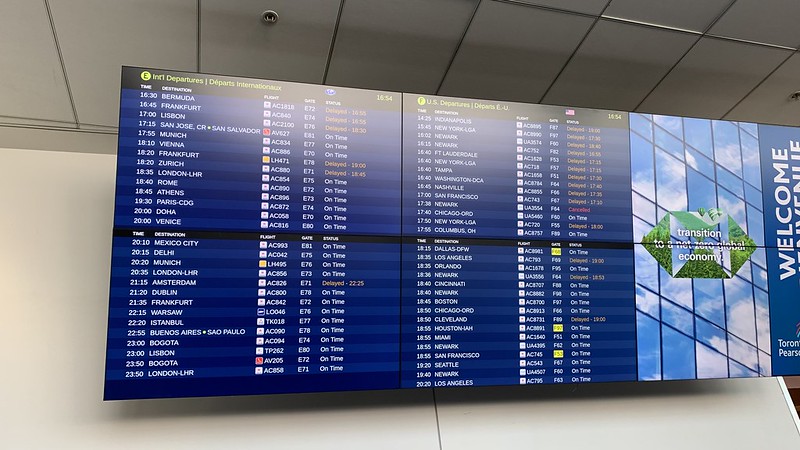 We spent some time at the Maple Leaf Lounge as a lot of time to kill before boarding. Safe to say that even post COVID, the YYZ MLL still continues to disappoint. It was jammed to the gills. Self service was still non-existent for hot food and drinks. We managed to find two seats and parked ourselves there for 1.5 hours before heading down to the gate. 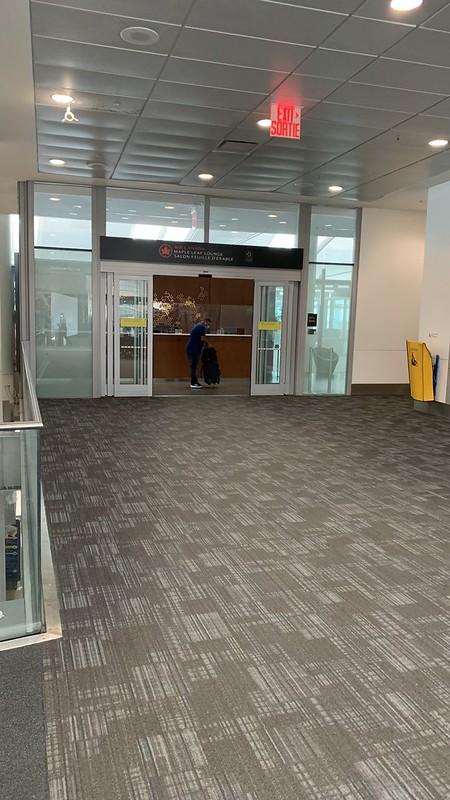 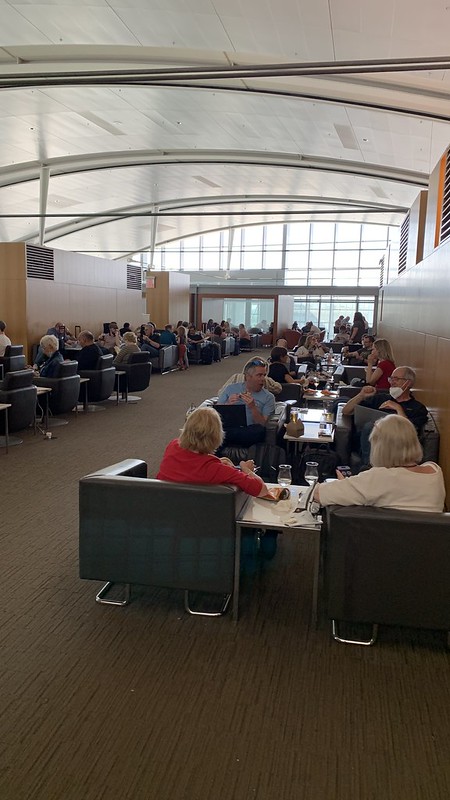 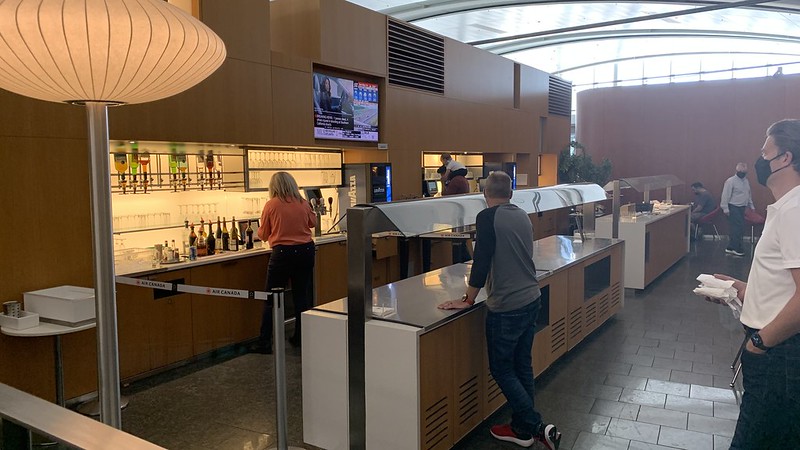 We went down to the gate as per the indicated time on our boarding passes. When we reached the gate, people were lined up and there was no sign indicating when boarding would begin other than a sign at the front indicating “On time”. An announcement was finally made after 30 minutes of waiting that boarding was delayed due to late arrival of the aircraft which delayed the cleaning crew and then delayed cabin crew from getting onboard to set up everything. Boarding was finally called at 8pm (initial departure was 7:30pm). 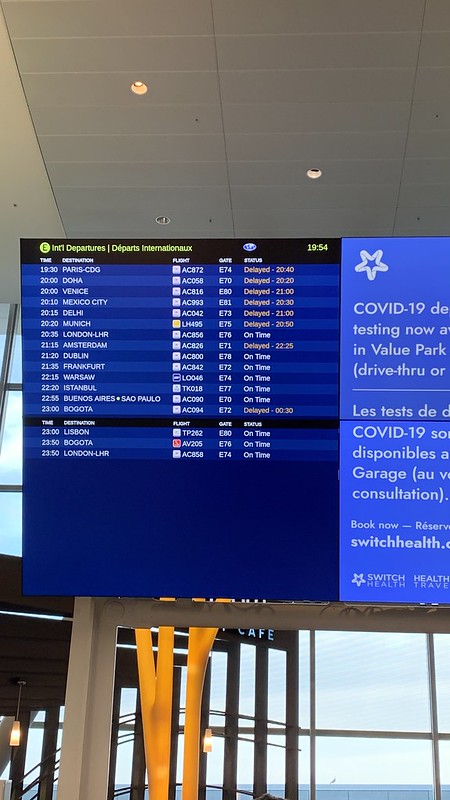 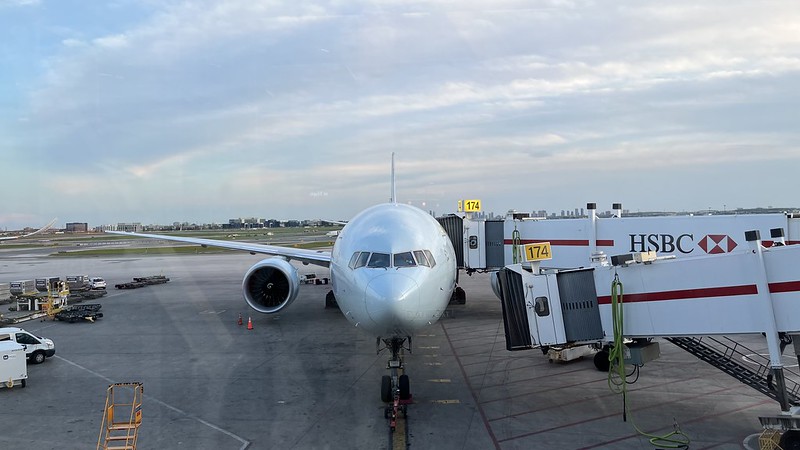 Slight line up in the tube but we were on quickly and turned left. 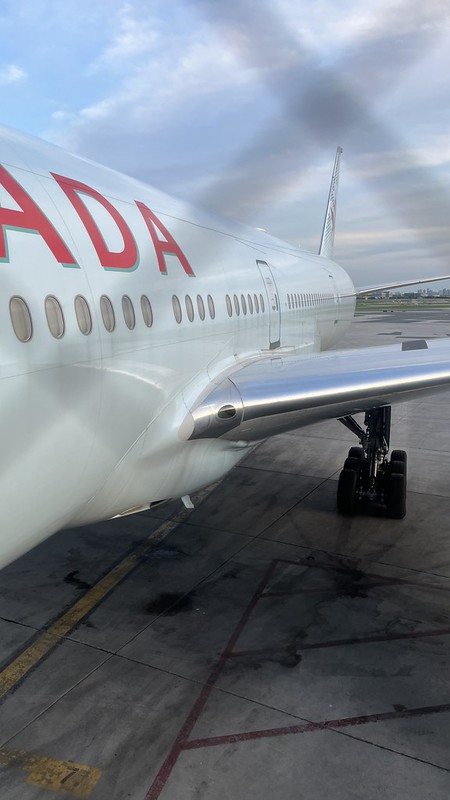 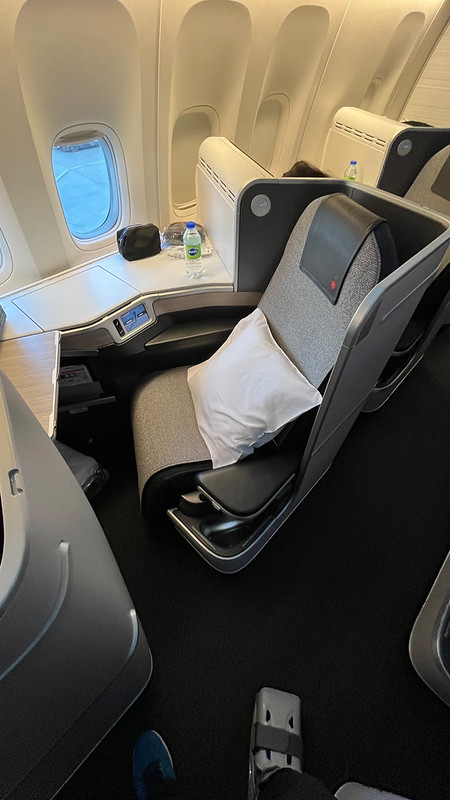 My impressions - this seat is just a poor product does not even compare to the likes of EK, QR, EY, SQ. It was perfectly comfortable when sitting but the TV was right in your face. When in bed mode, there was little room for your feet in the cubby hole and is tough to sleep if you are a side sleeper like me. 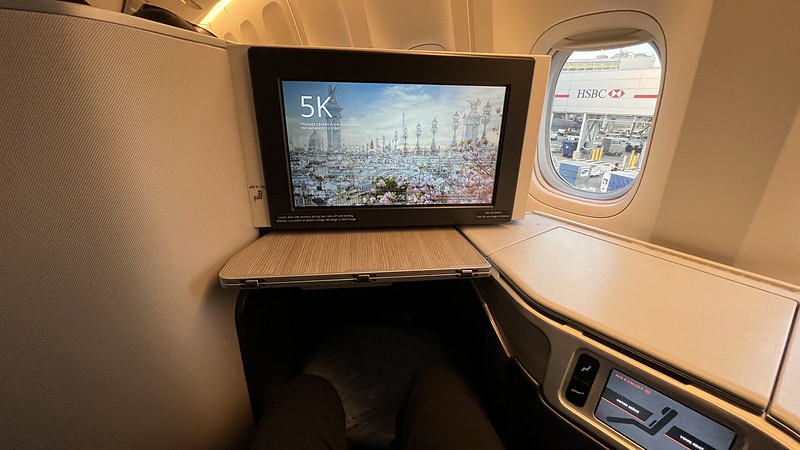 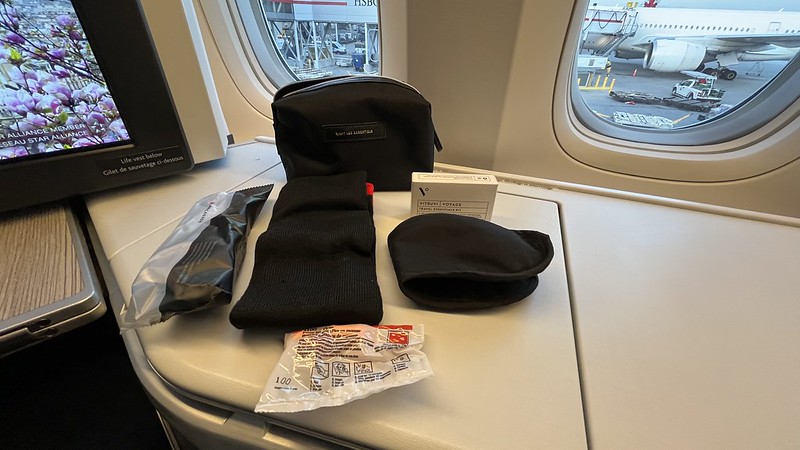 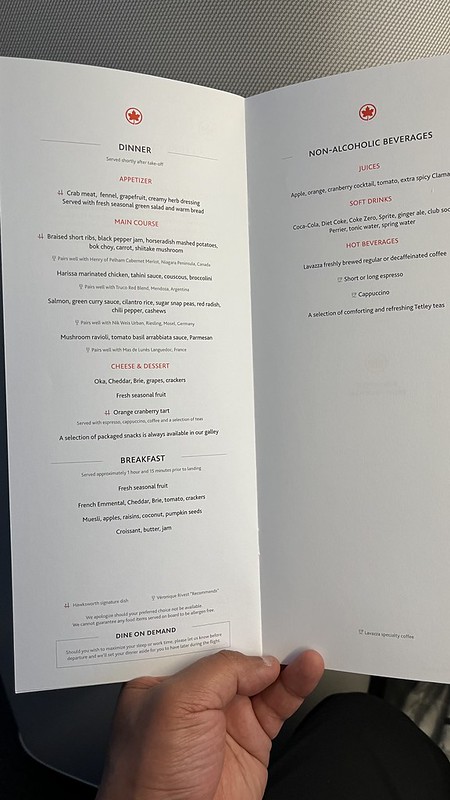 Everything was going well until the clock hit 9pm and then the captain made an announcement which no one wanted to hear. As per union rules, a flight cannot be operated with 2 pilots after 9pm and we required a relief pilot to be on board. The oncall pilot was paged and there was no ETA until when he would arrive. The captain promised that he would keep us all updated and true to his word, he came on every now and then to give us updates. While we were waiting, the cabin crew came by to take dinner and drink choices.

Cant go wrong with champagne in a plastic cup. LOL. 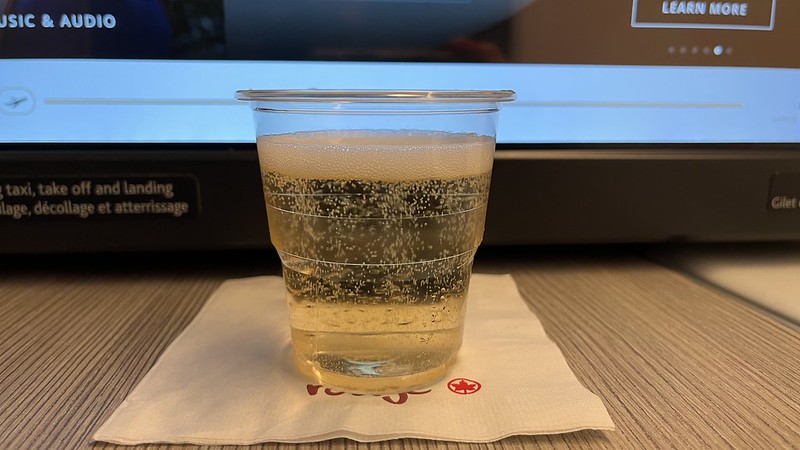 We finally got good news around 11pm and the relief pilot was going through security and he requested to buckle in and get ready. The moment the pilot relief entered the aircraft, the door was closed and we pushed back.

Booked it out of YYZ like a bat out of hell. 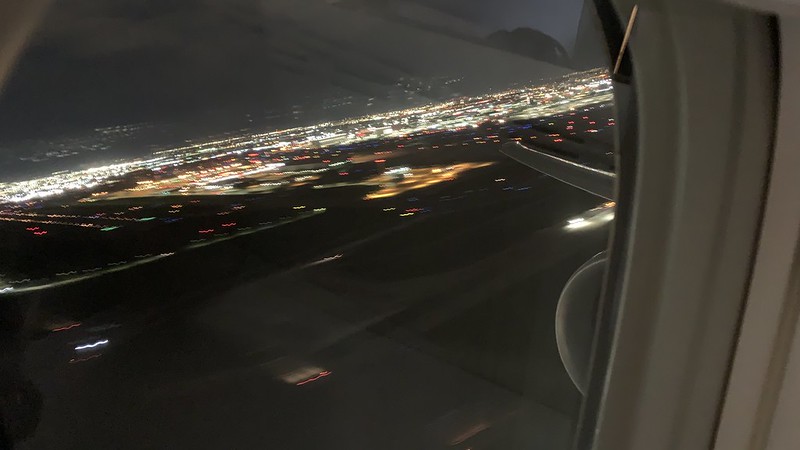 Dinner was served quickly and efficiently and I was done eating 90 minutes after take off.

Appetizer - I only picked at the crab meat and salad. Bun was rock hard. 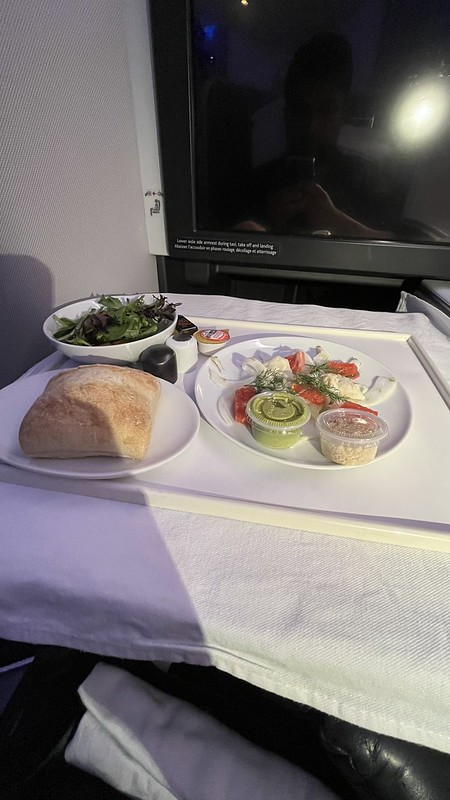 Beef for me which was delicious and had a good spicy kick to it. 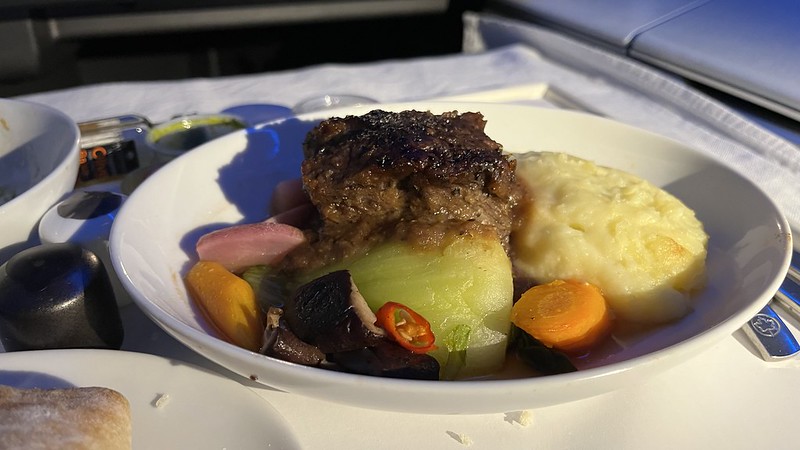 The Mrs went with the chicken and her verdict was “good” :D 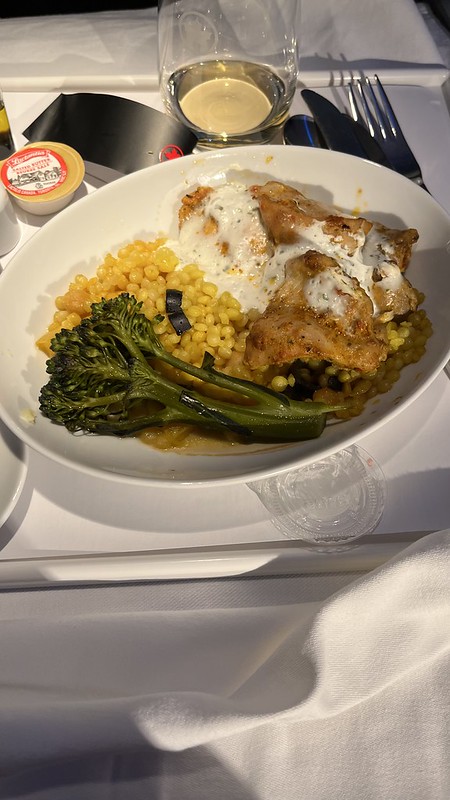 Lemon tart which was ok again. 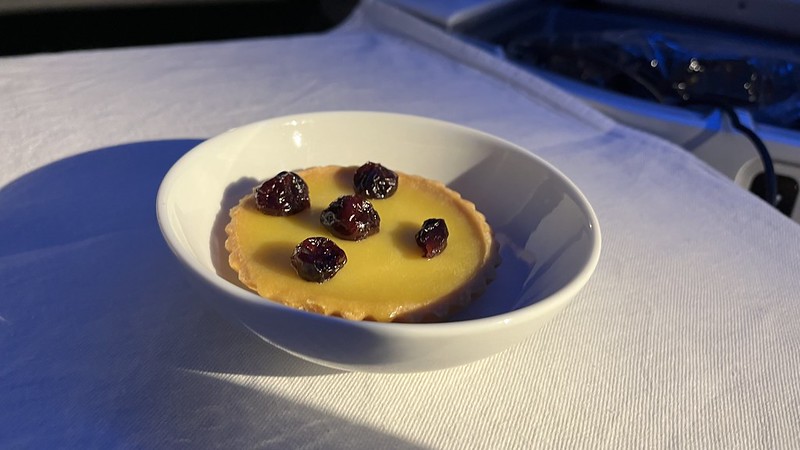 I slept for a few hours and got up an hour before landing. The cabin crew came around asking if I wanted anything to eat or drink and I kept it light with a glass of OJ. 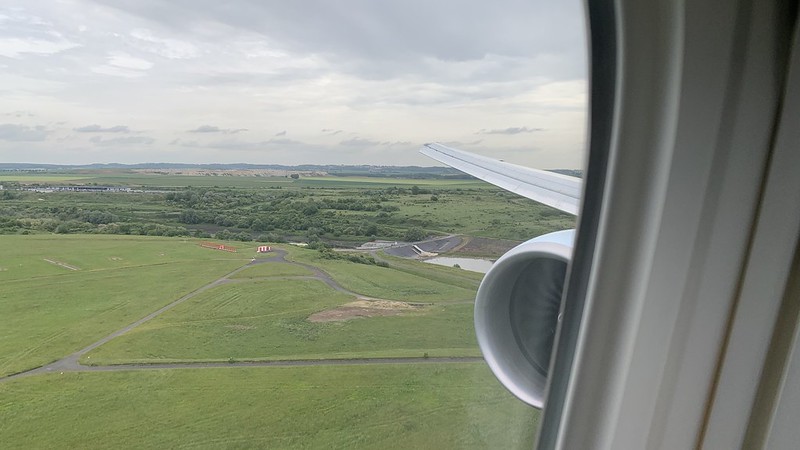 EK heading back to DXB. 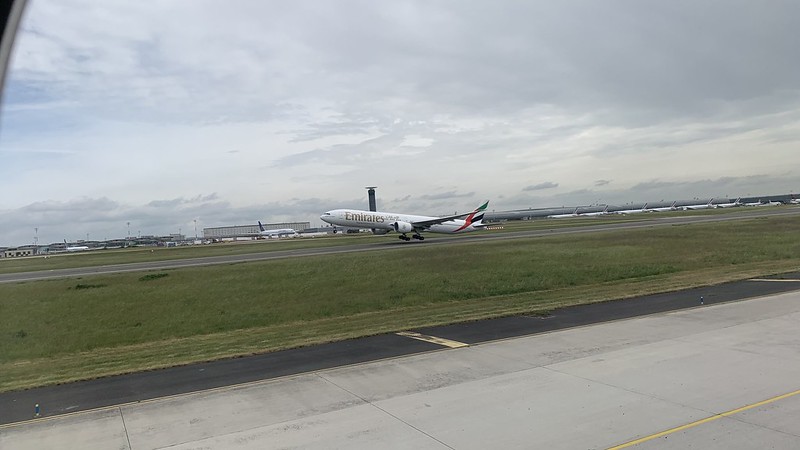 Once off the plane, we headed to immigration and was past in 10 minutes. Collected our bags and walked to the train station to catch the RER to Gare du Nord. 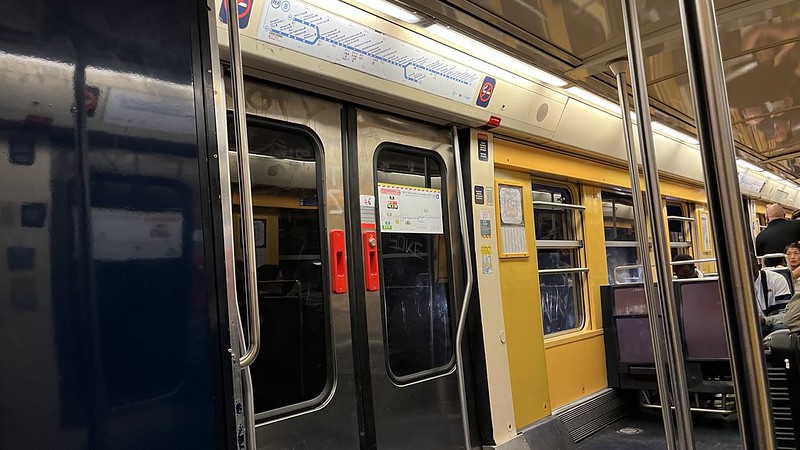 1. Pearson airport is an absolute cluster F.
2. The pilot and crew were good in keeping us informed about the situation on the ground.
3. Food was surprisingly good overall.
4. Cabin crew was professional but not overly engaging.

The contributors of Flight-Report published 25 reviews of 2 airlines on the route Toronto (YYZ) → Paris (CDG).

The average flight time is 7 hours and 7 minutes.

He wrote 35 reviews about 15 airlines and 27 airports.