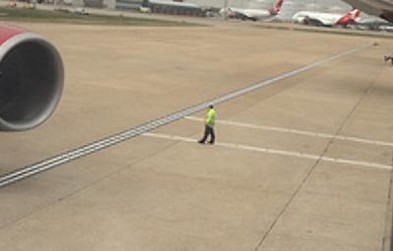 #4 out of 78 Airlines A minimum of 10 flight-reports within the past two years is required to appear in the rankings. 47 reviews

By Sealink 9120
Published on 14th December 2013
This was my first flight in UC since 2009 and my first long haul flight with Virgin since 2010. On every level I was delighted and impressed with the service provided; proof to me that using miles to upgrade is their best value.

The experience started with Drive-Through check-in.
Although a chauffeur is not included in G-class fares, I decided to book a taxi from my home to Heathrow. Not only was it easier, I also had a, *cough* suitcase full of provisions to take to my hosts over there. Fairy Liquitabs are a currency amongst ex pats out there!

This was the morning I woke up to:

I booked drive through check-in a few days earlier, and advised them I would arrive at 9.30am.

What happens if traffic is clear and I arrive earlier? I queried.
More time in the Clubhouse! was the cheerful reply, which suited me fine!

So on Thursday morning my taxi arrived, and enroute I called the Upper Class team to advise them of the registration of the car and the make and model. And that was that.

The very sharp turn off at Heathrow is signposted now, and my taxi driver commented at how nice it was.

My door was opened, my boarding cards handed to me, and my luggage was lifted from the boot and I didn't see it again until Shanghai.

I went through private security and even though I hadn't packed a liquid in a clear plastic bag (they provided one for me) it was a quick process. Eight minutes later I was in the Clubhouse, first with a greeting (by name) at the reception desk. y)

The Clubhouse looked busy at first glance but actually I found seats easily enough and service was fairly prompt.

First things first, I booked a haircut at 1030am and then went for breakfast. 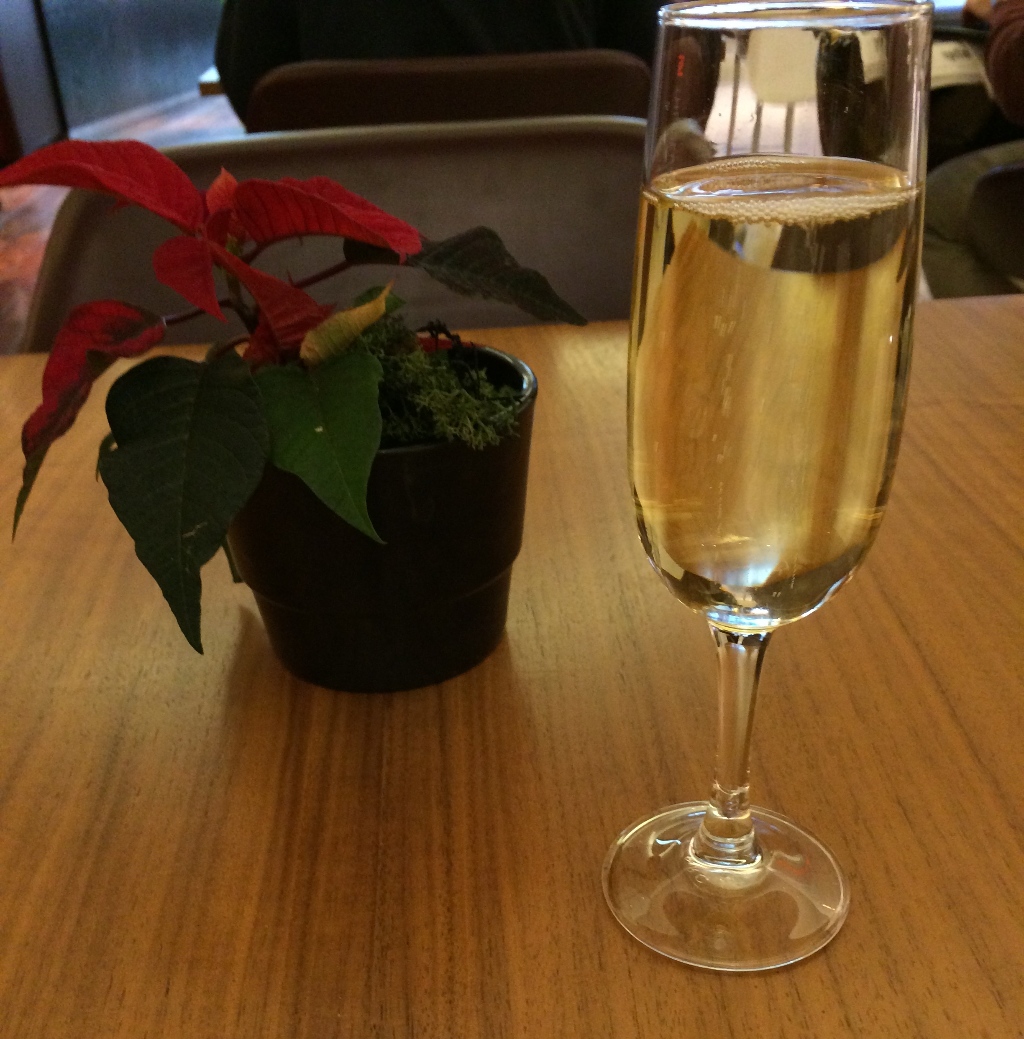 Then an English breakfast. Followed by a potter about the Clubhouse - it was far far smarter than on my previous visit. 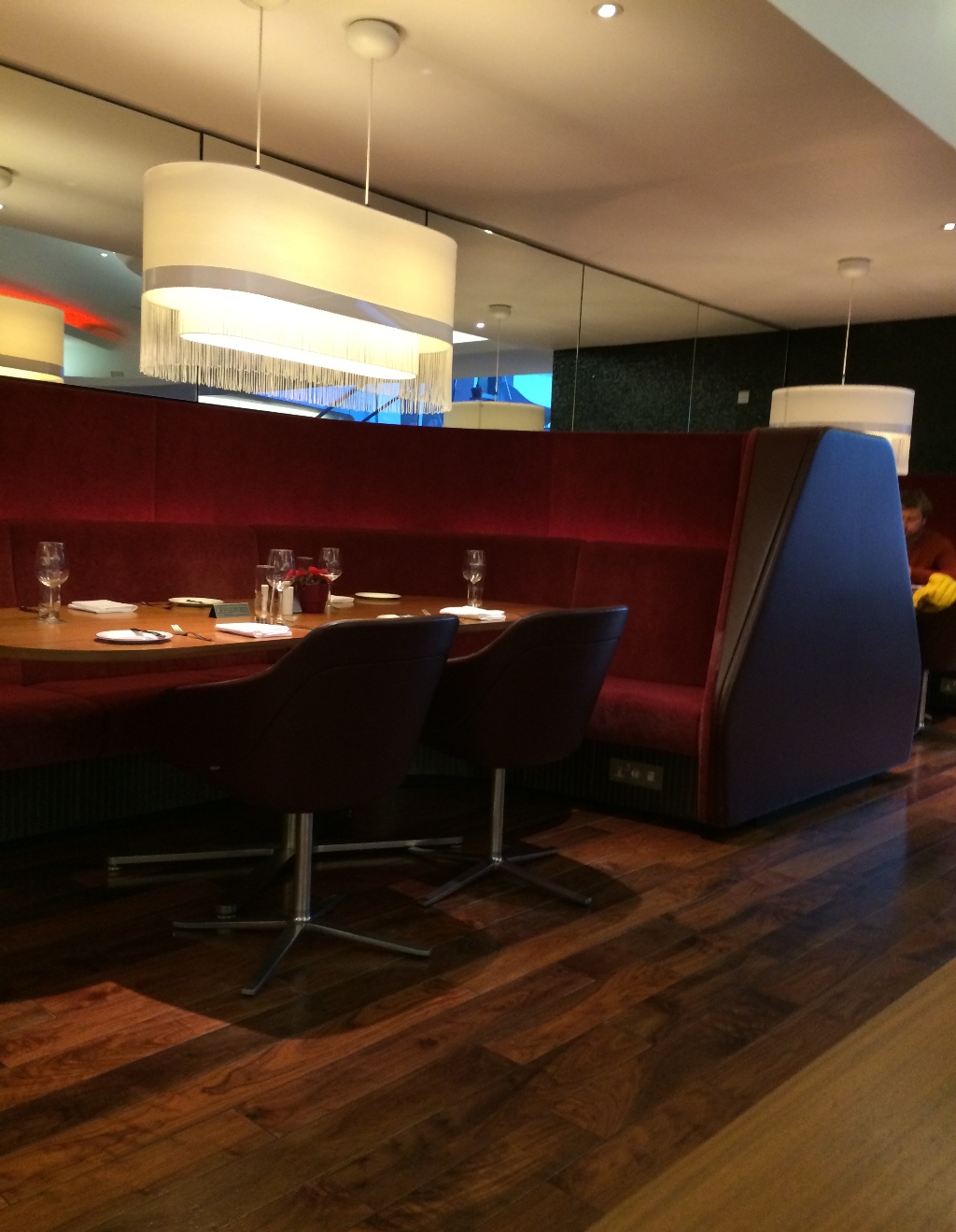 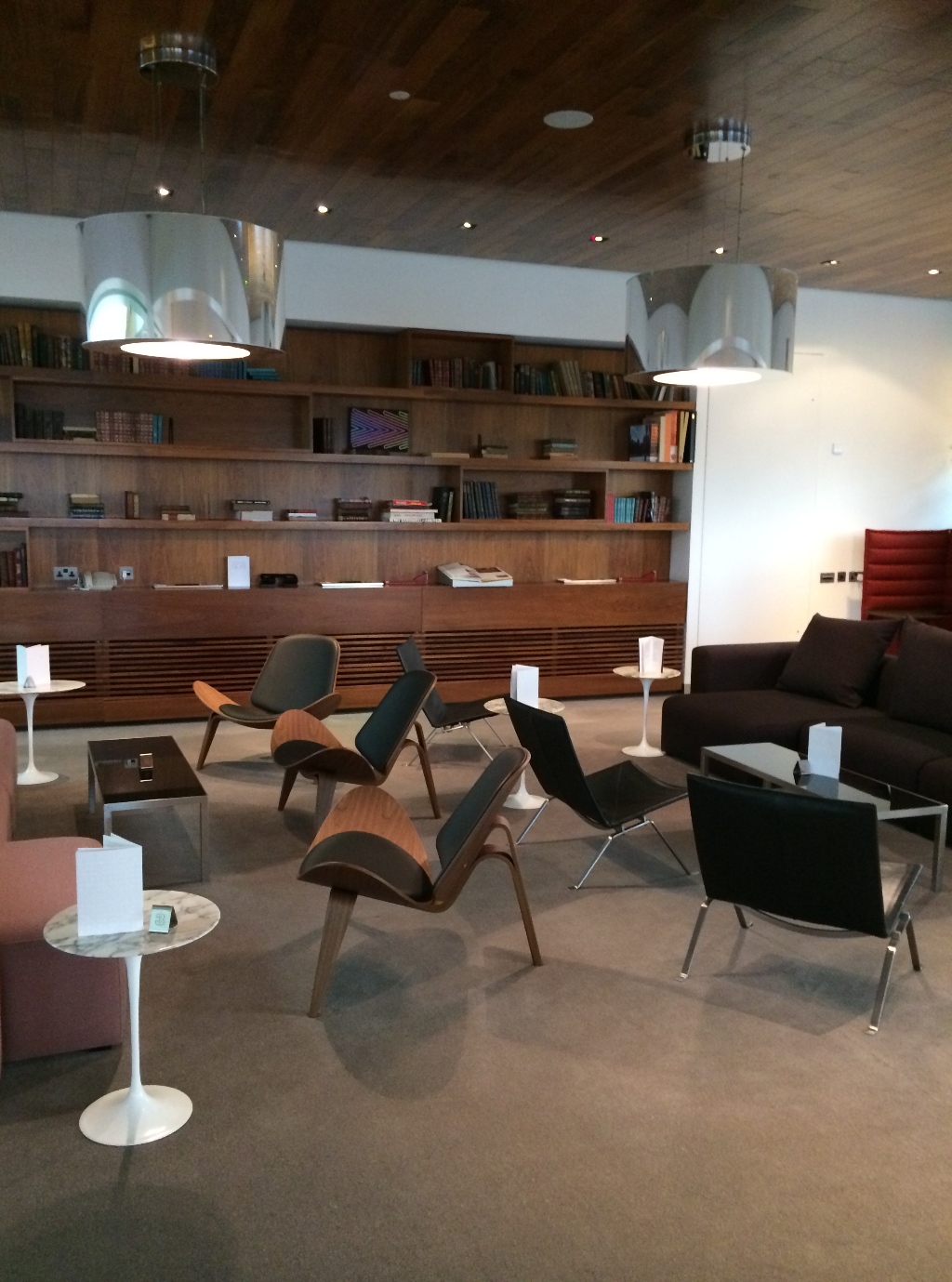 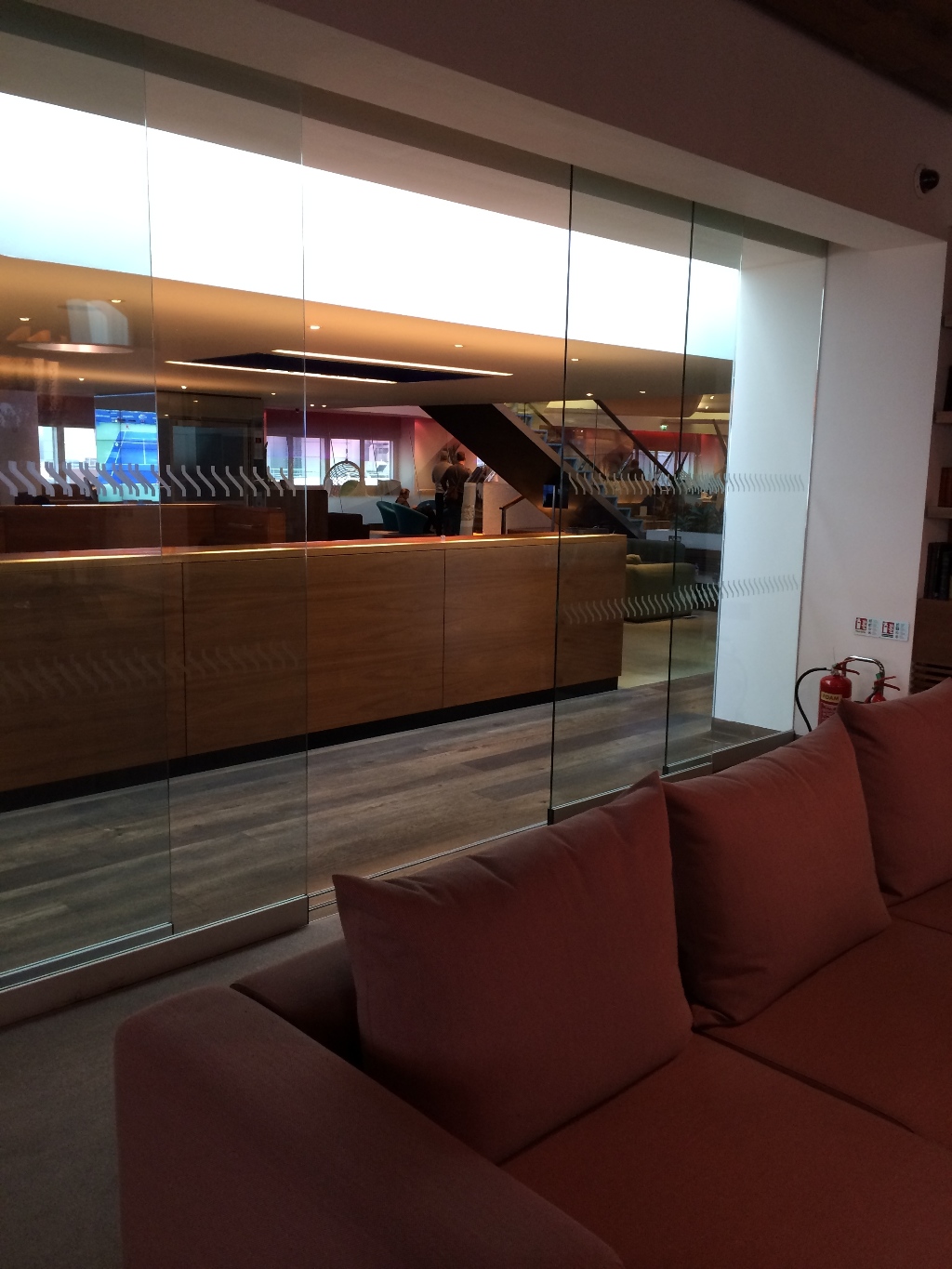 This was the view from the Bumble & Bumble Hair Salon in the Clubhouse. 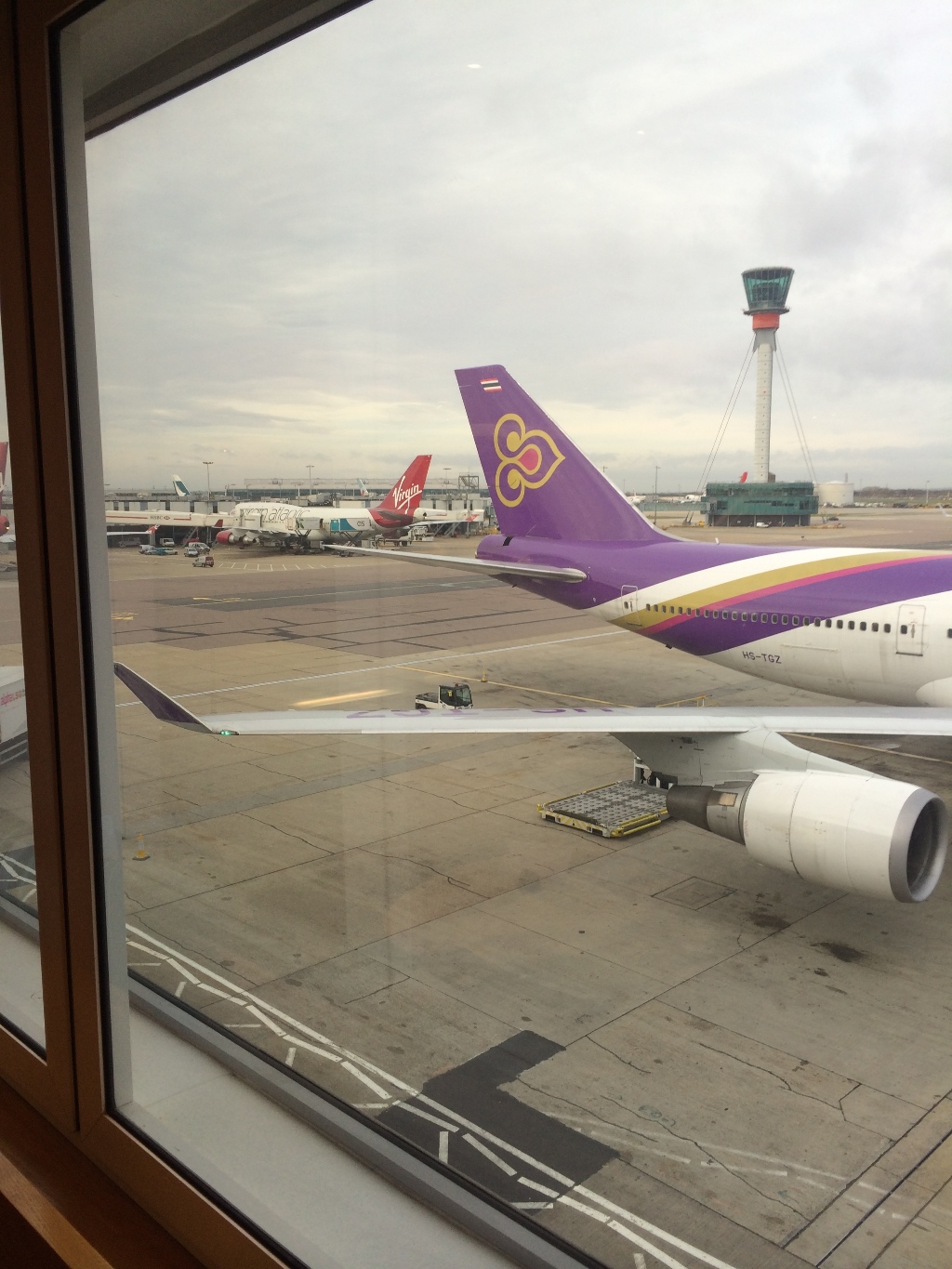 I sat at the bar and had an obligatory redhead, however, it was a tad sweet for my tastes… 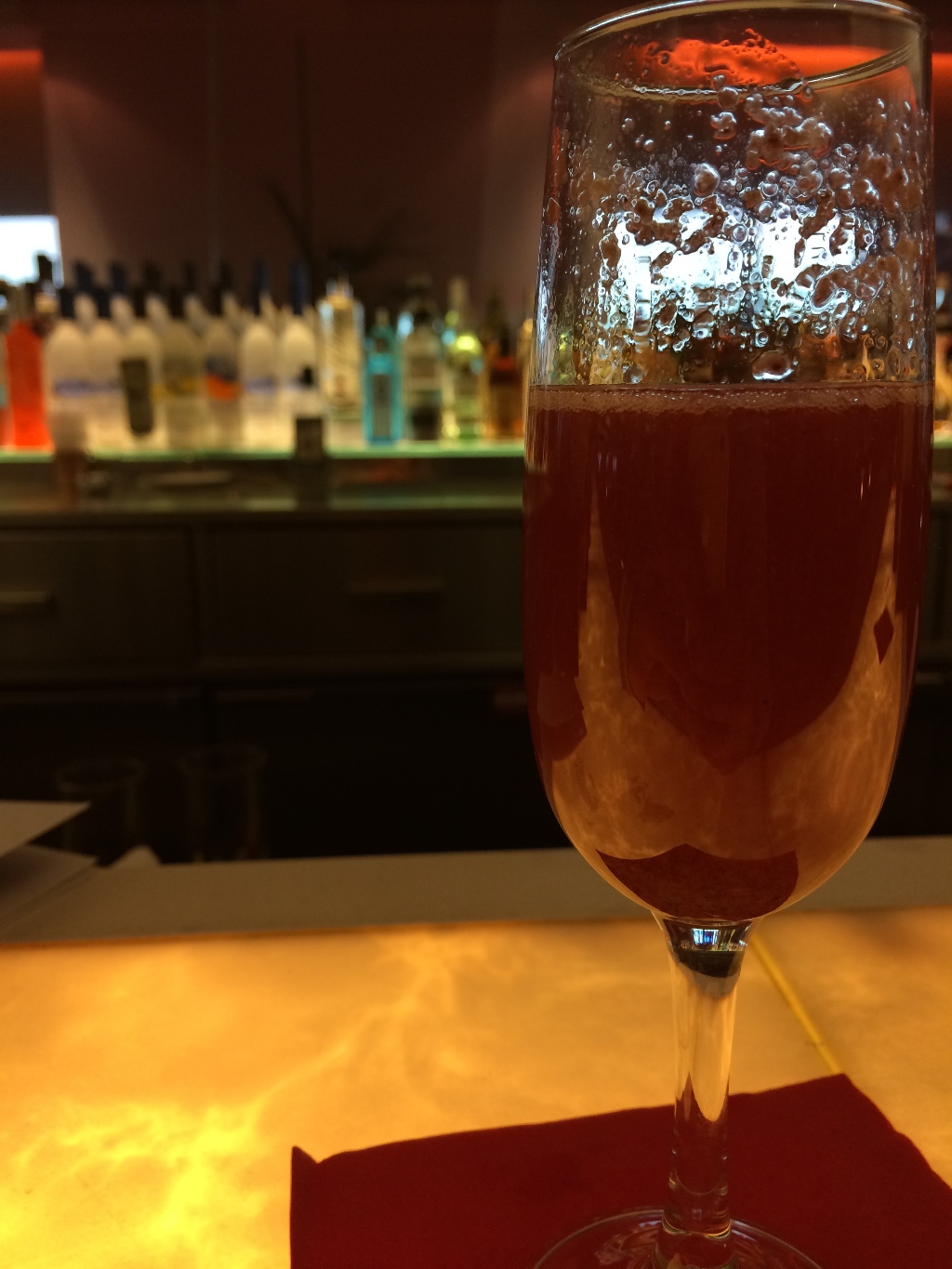 So I then tried a rather lovely Breakfast Martini. 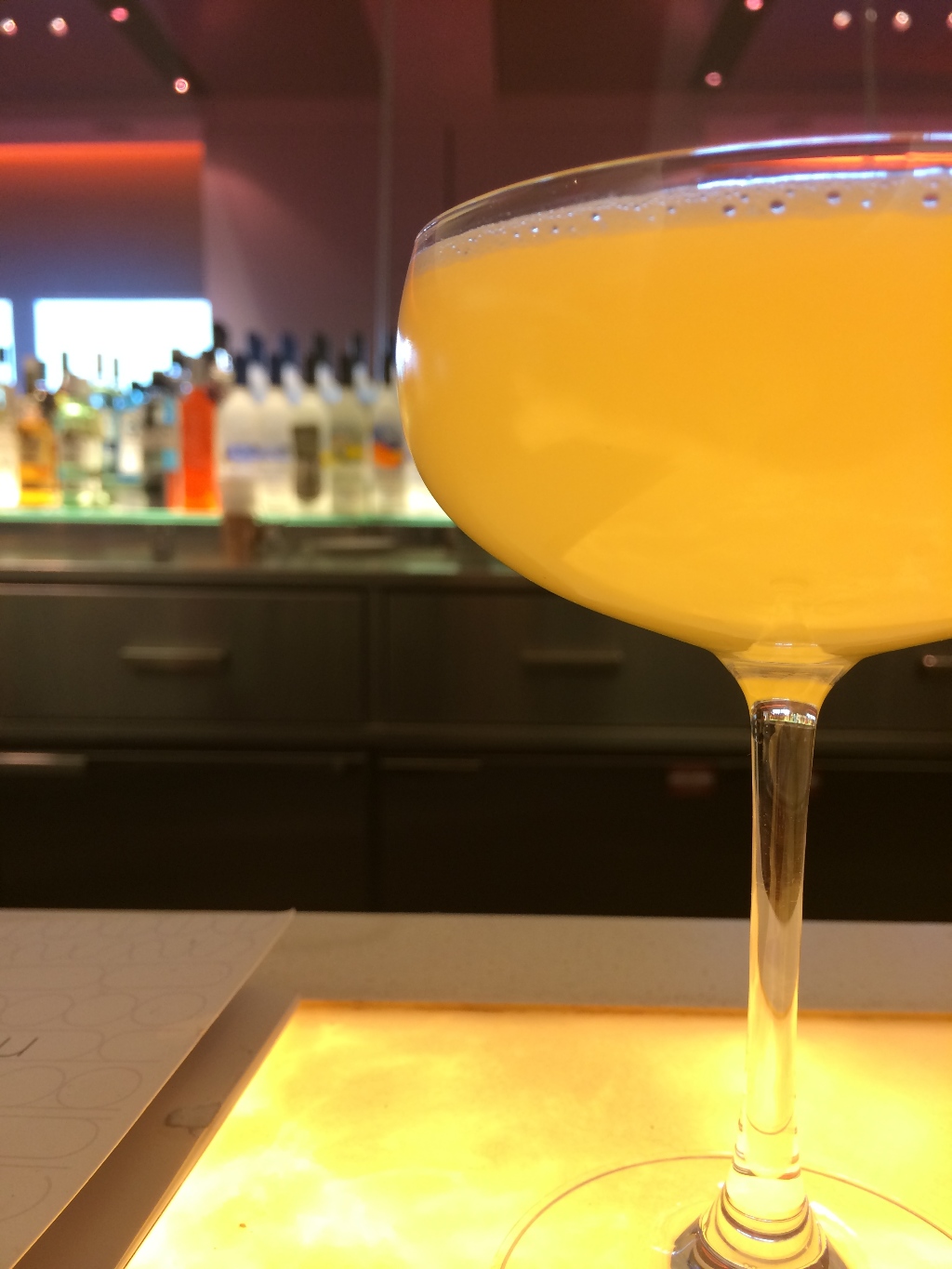 This was Noilly Prat Martini, marmalade infused vodka and orange and lemon bitters. 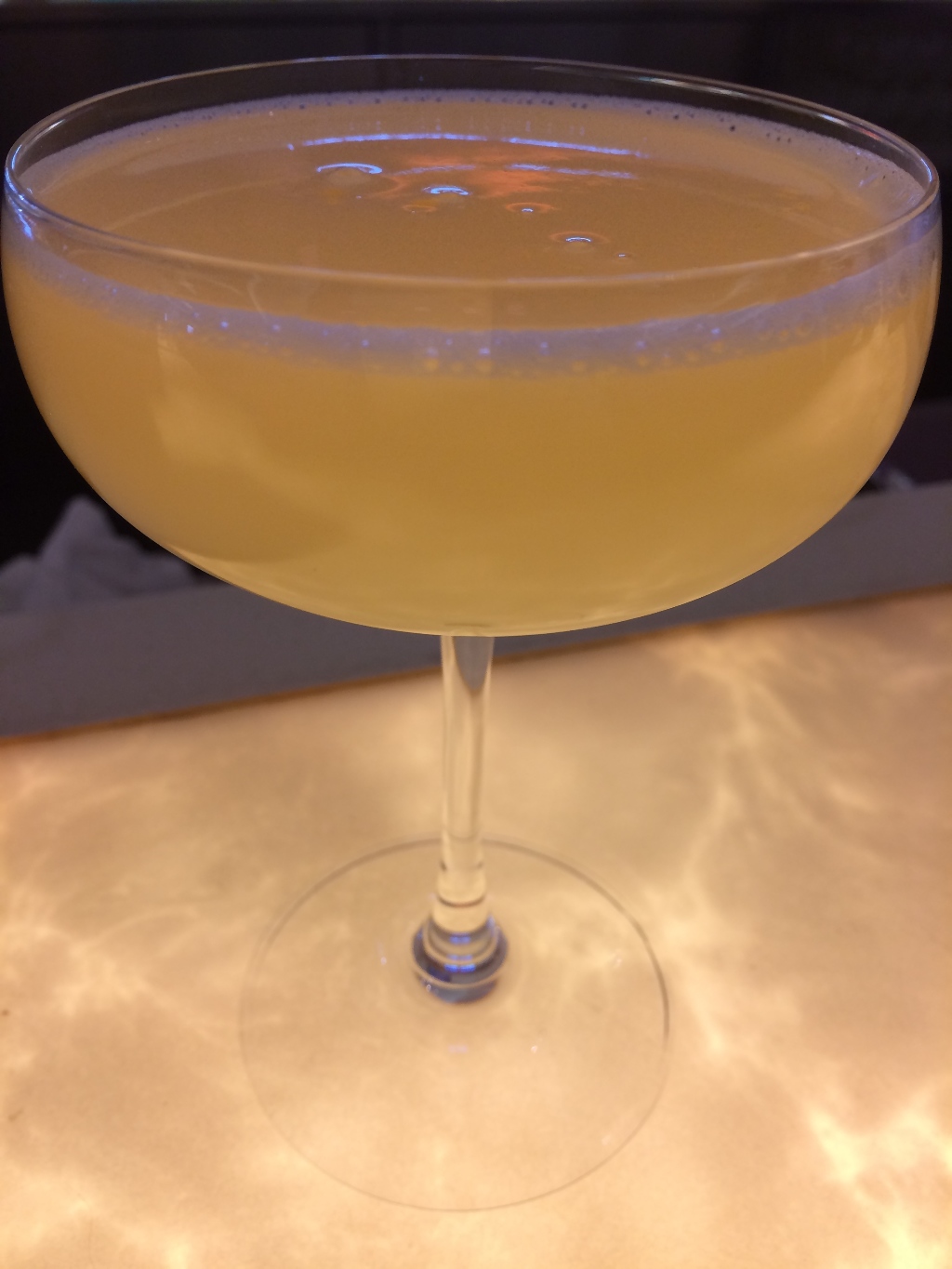 Later still, I decided to try the famous Clubhouse burger…

My flight was called before the burger was served.
A quick check with the waiter who said 'Oh don't worry, that's only the first call' and then presented me with this: 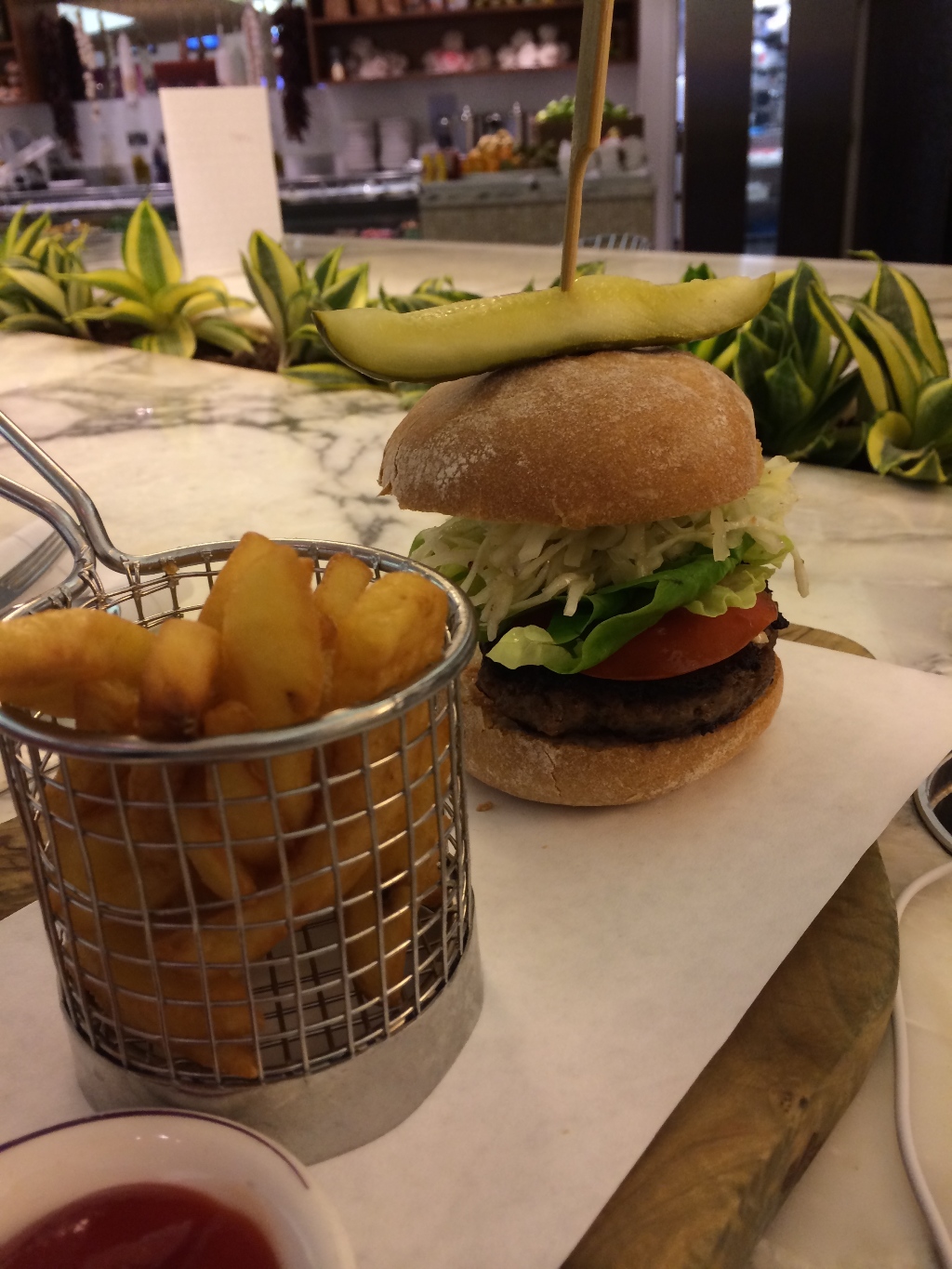 Then down the steps to my gate, where Varga Girl was waiting. 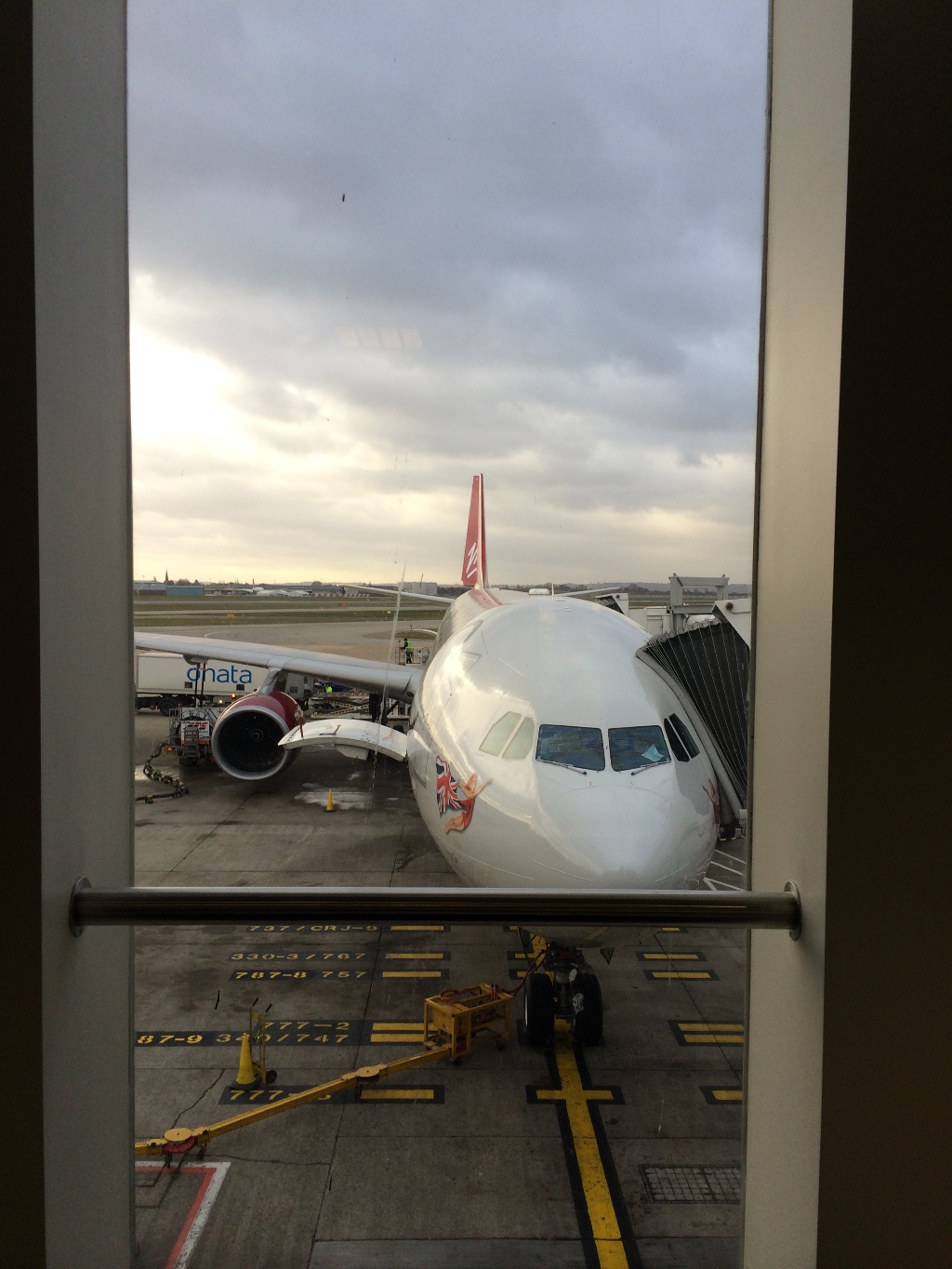 I was greeted by name upon boarding and found my seat (11A).

Before long I was offered a glass of Champers, gratefully accepted and refilled. 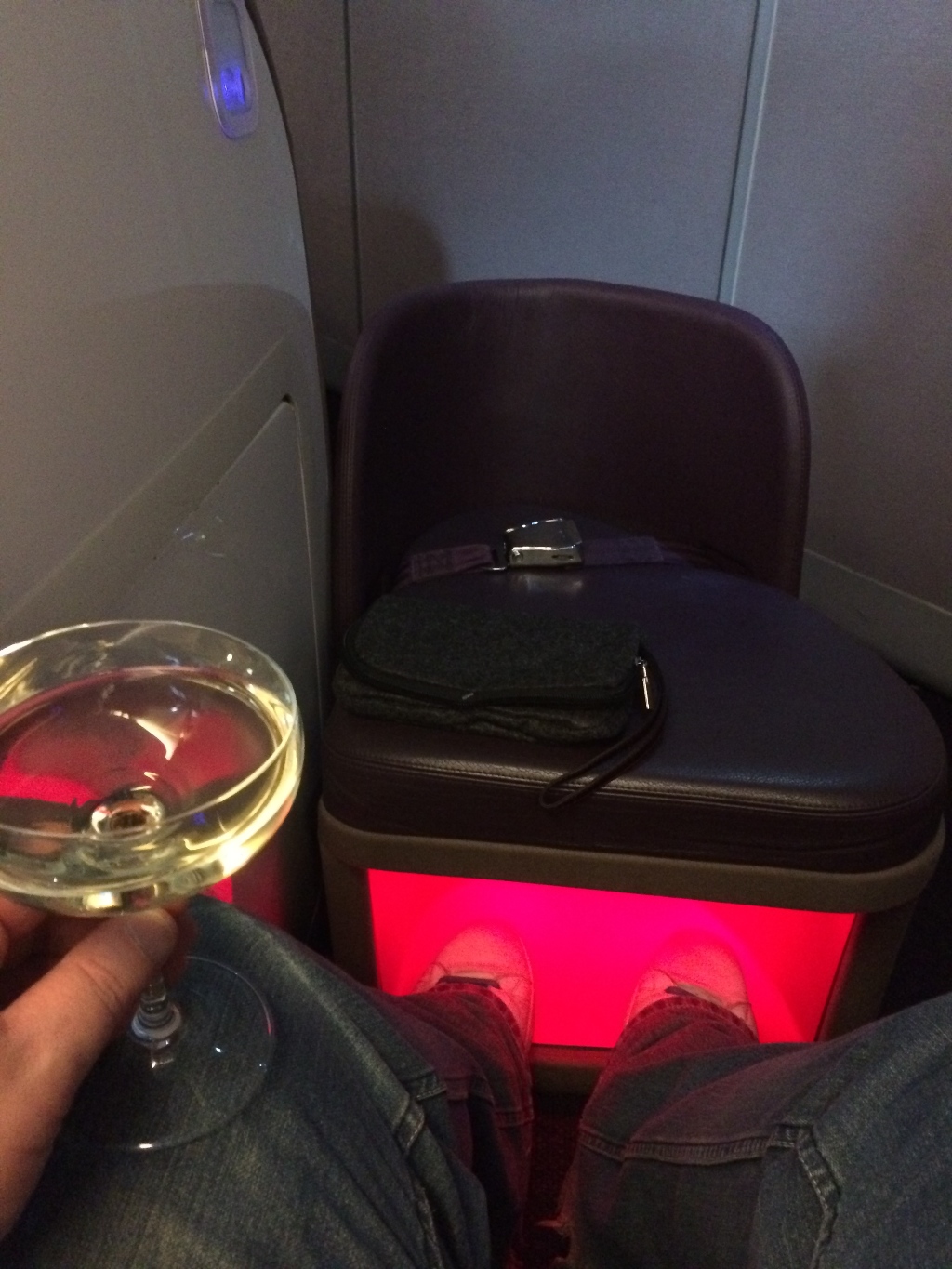 The announcement was that there were 259 pax, 13 crew and 3 pilots on board today. One strange announcement from the rather curt (but still friendly) FSM was We can refuse to serve alcohol based on consumption, not just behaviour - a shame that it's come to this!

Bowls of crisps were provided too and I settled in for the flight. 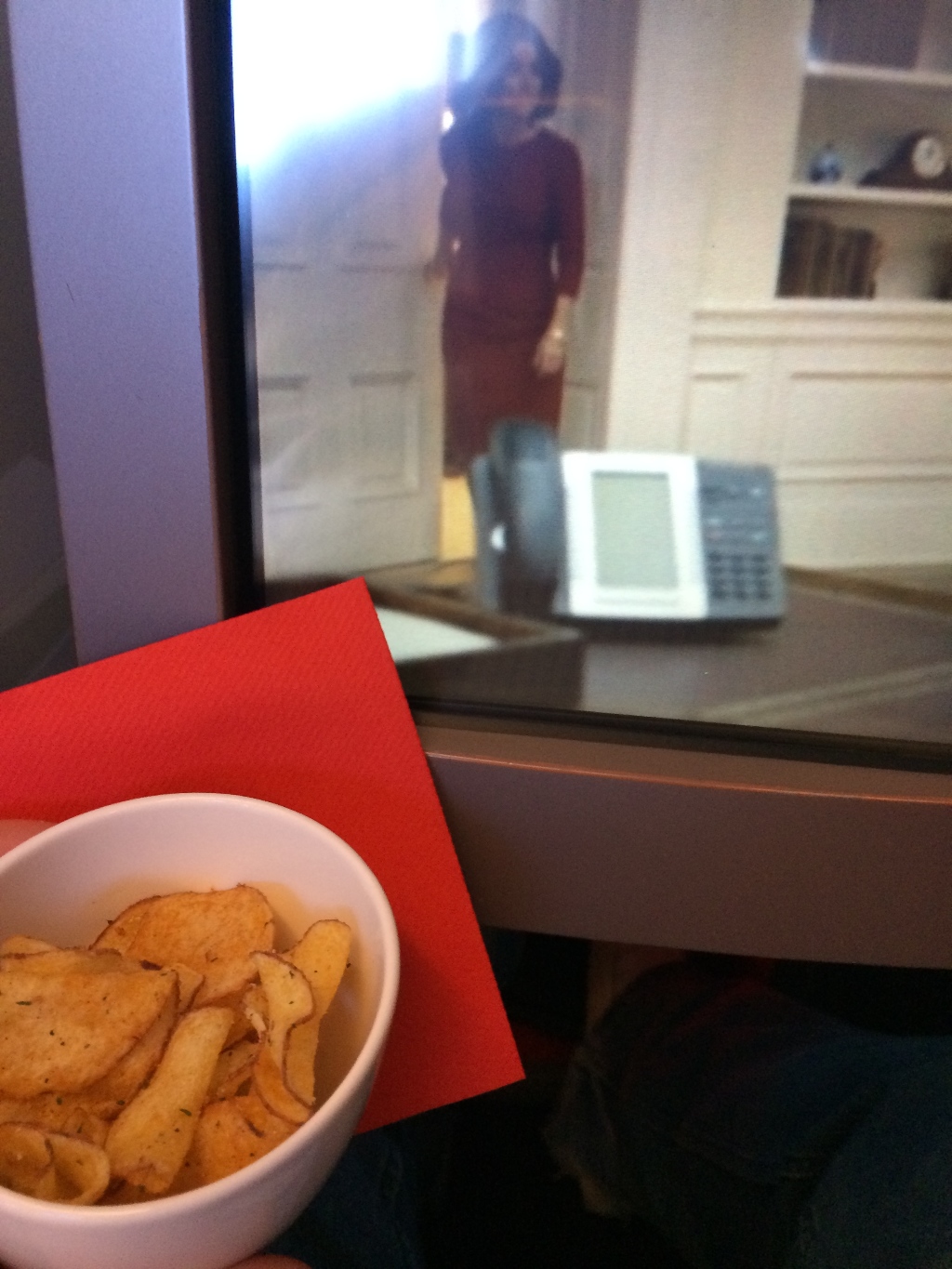 Before take off hot towels were distributed. I still find this practice odd, such a funny little ritual.

There is a little shelf behind your shoulder in UC, however it's almost useless, which is why I am holding the bowl of crisps.

The cabin looked really quite good. 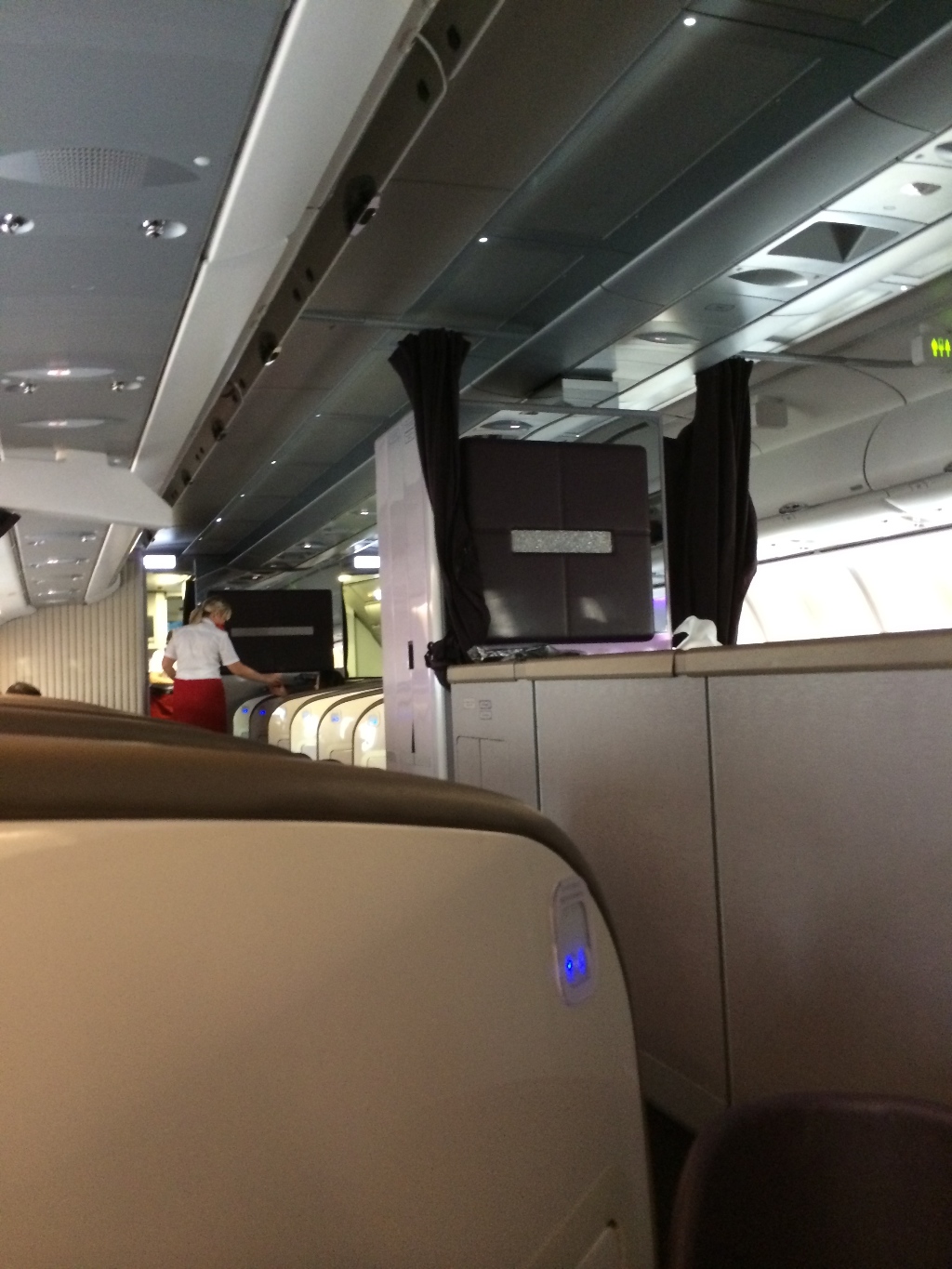 Before long it was time for lunch.

I was mightily impressed with the way the food was presented compared to previous years. For example, this was the starter: 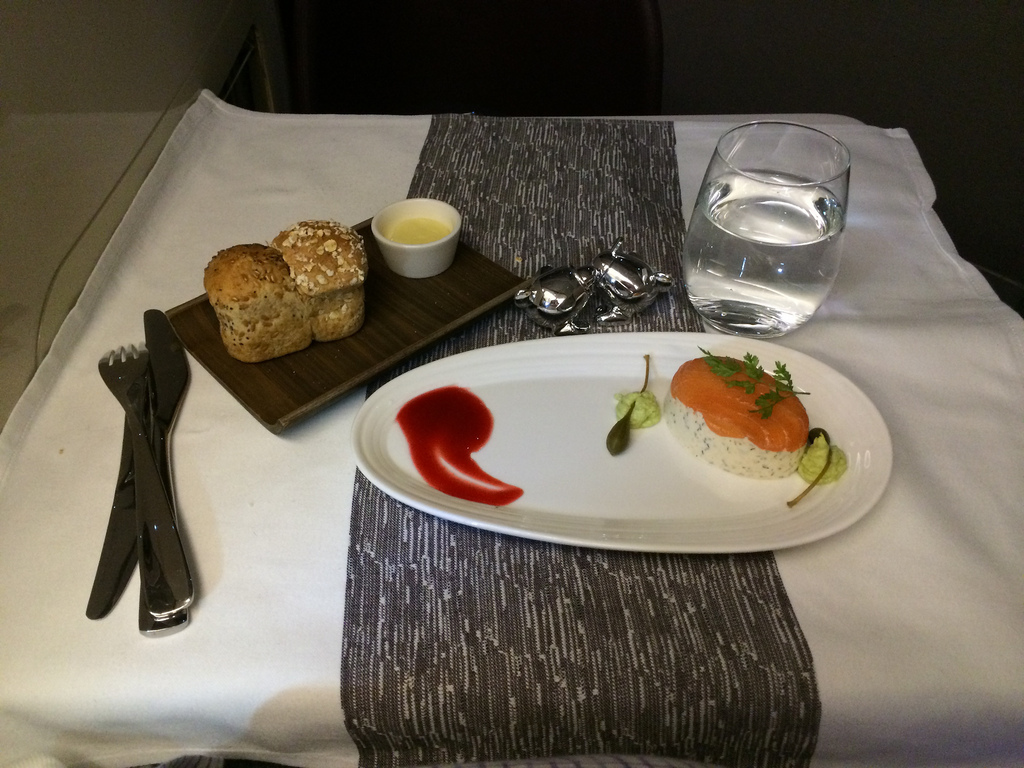 The main course was beef, served with mash and celeriac chips. The chips unfortunately did not look good on the plate. 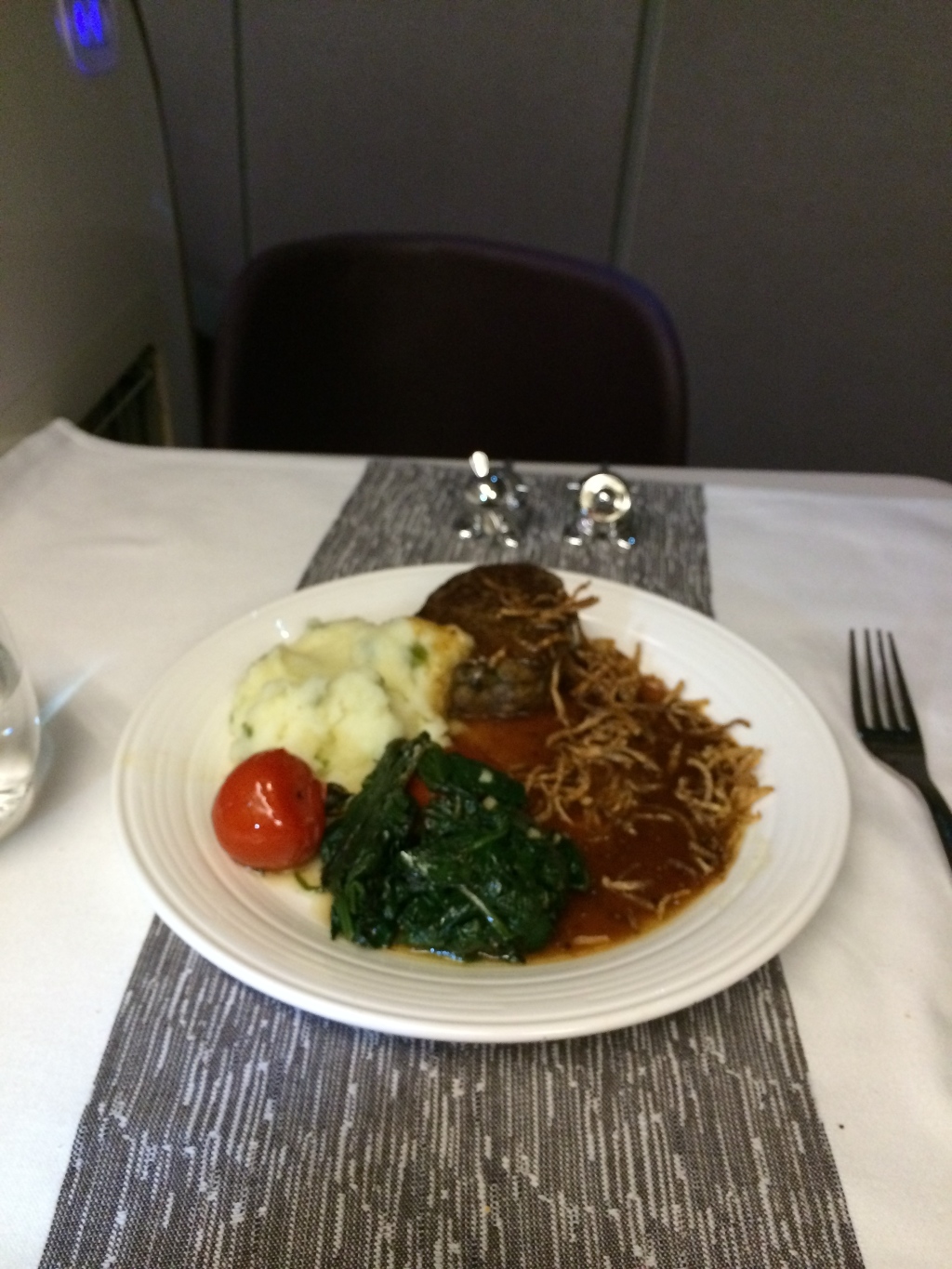 However it was really tasty.

I had the tiramasu for afters. 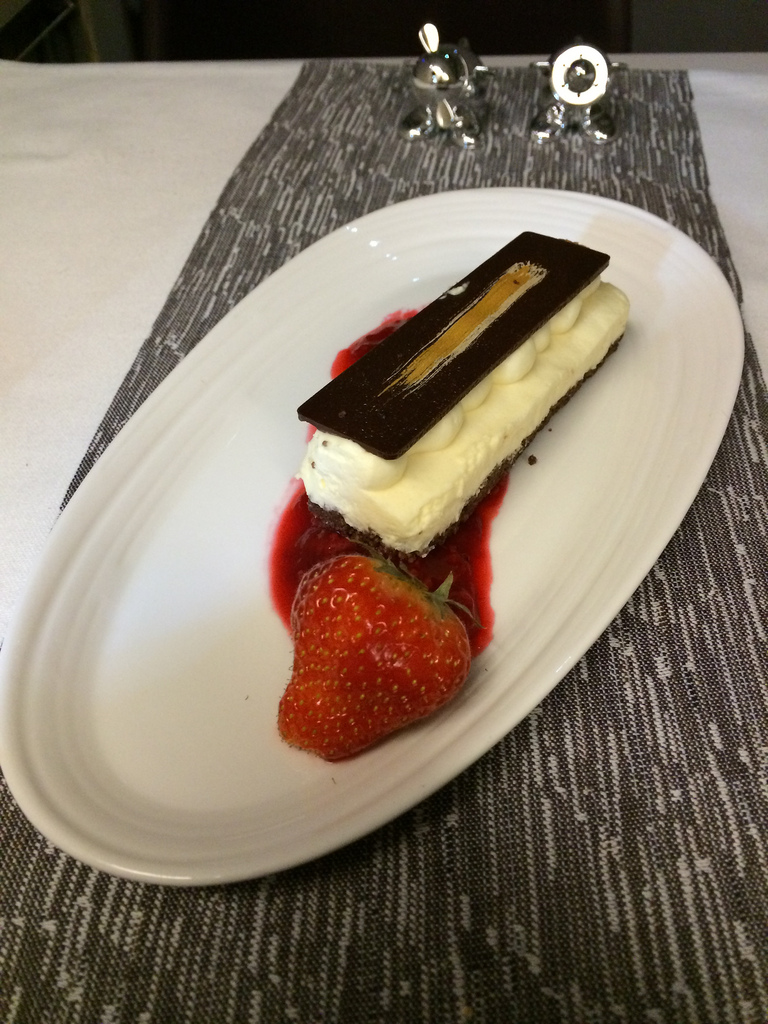 Then cheese and biccies - served on a plate and not from a trolley was quite nice too. 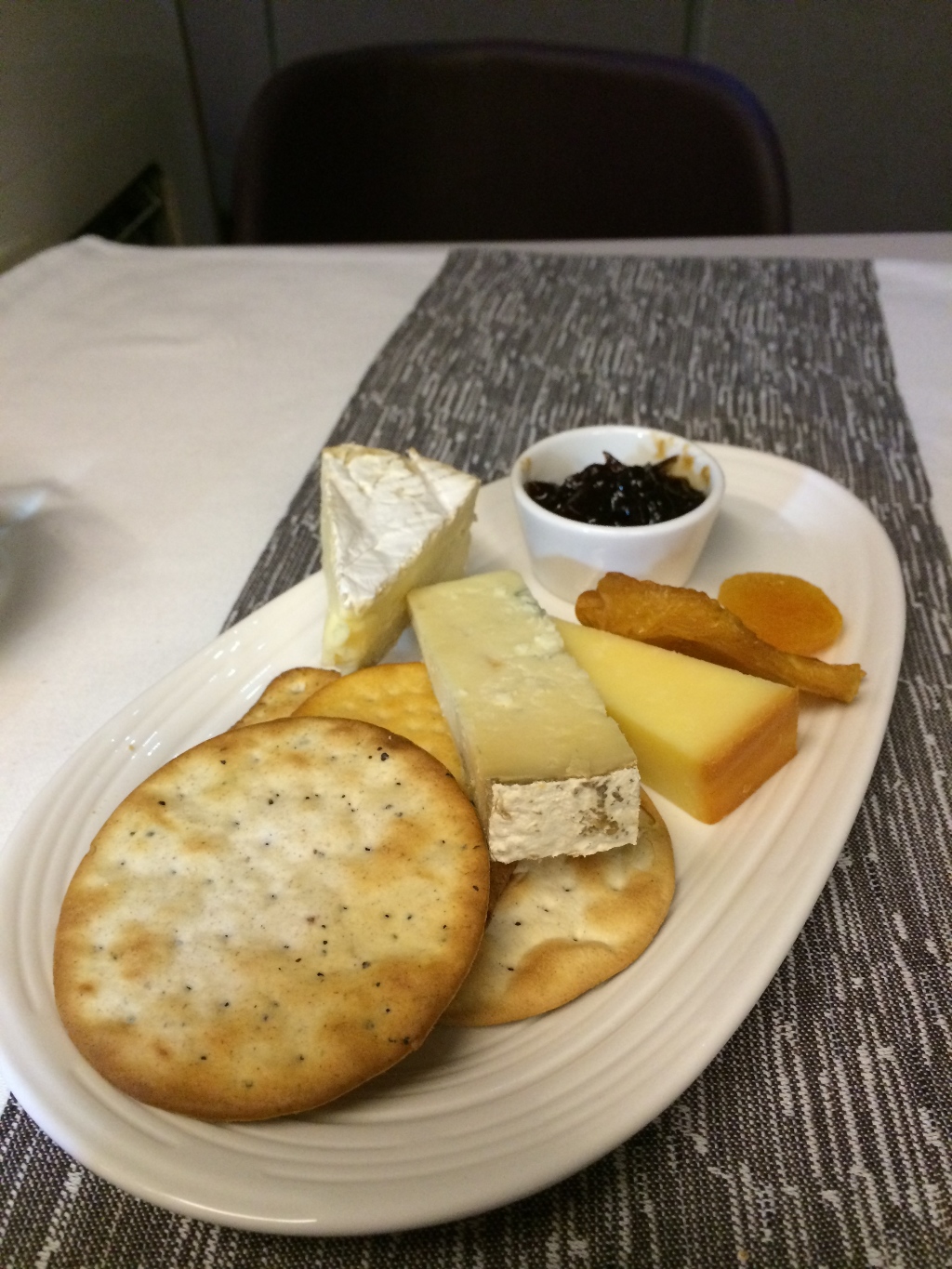 I watched an episode of Family Guy and American Dad, then tried to watch The Croods, but couldn't finish it. Either I was not in the mood or I couldn't find anything worth watching on Vera.


I popped up to the bar for some Champers and had a chat with a fellow passenger heading to NZ, connecting via Shanghai onto Air New Zealand a few days later, which seems a good way to get G-class (miles booking class)
availability on such a long journey. 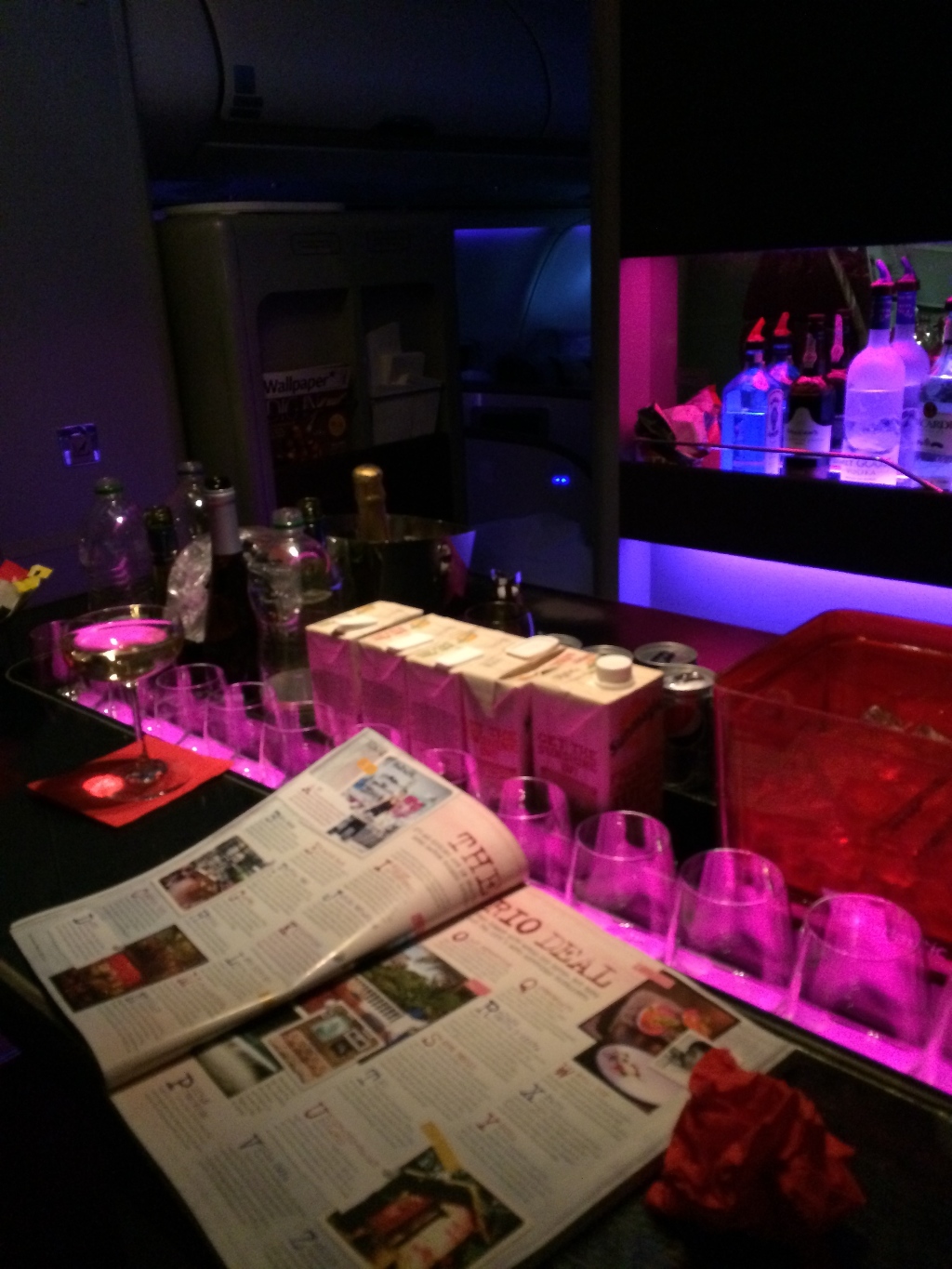 I tried to sleep for a bit, but that wasn't working either! The bed was quite comfy really, but I can't sleep when travelling, for some reason. 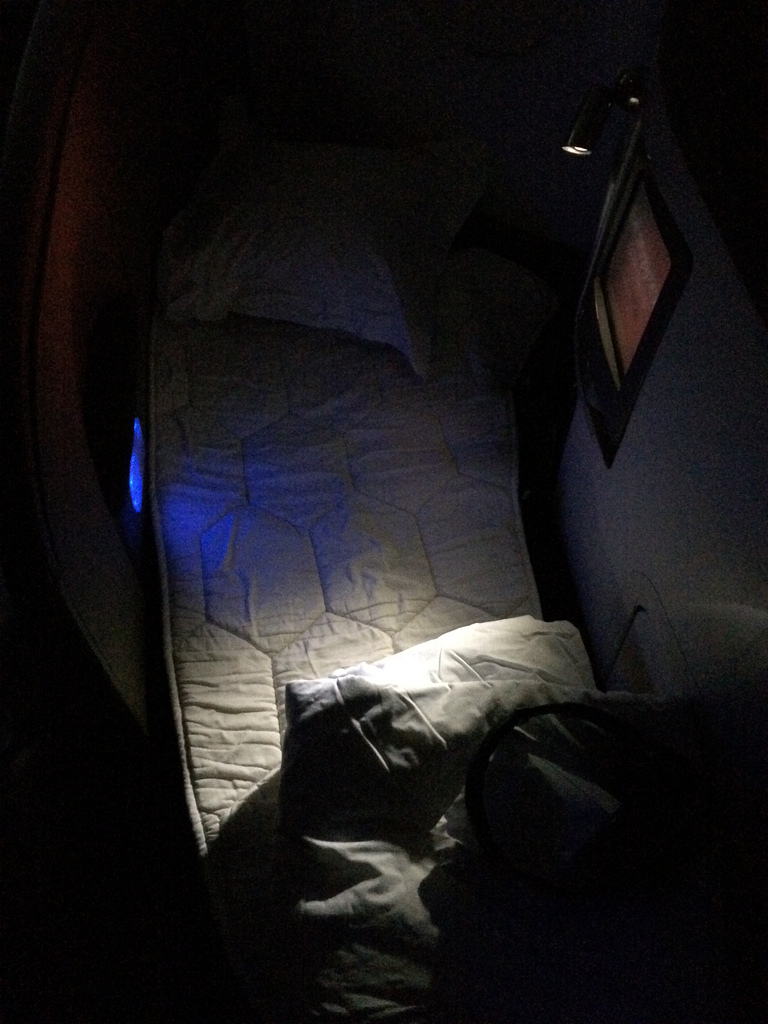 I watched We're the Millers and enjoyed it more than I expected.

Morning some came around, and the steward asked if I wanted breakfast.

I opted for the full English.

And a bacon roll? he enquired.

I didn't find the English breakfast that bad, but on reflection, the bacon roll was the better of the two. 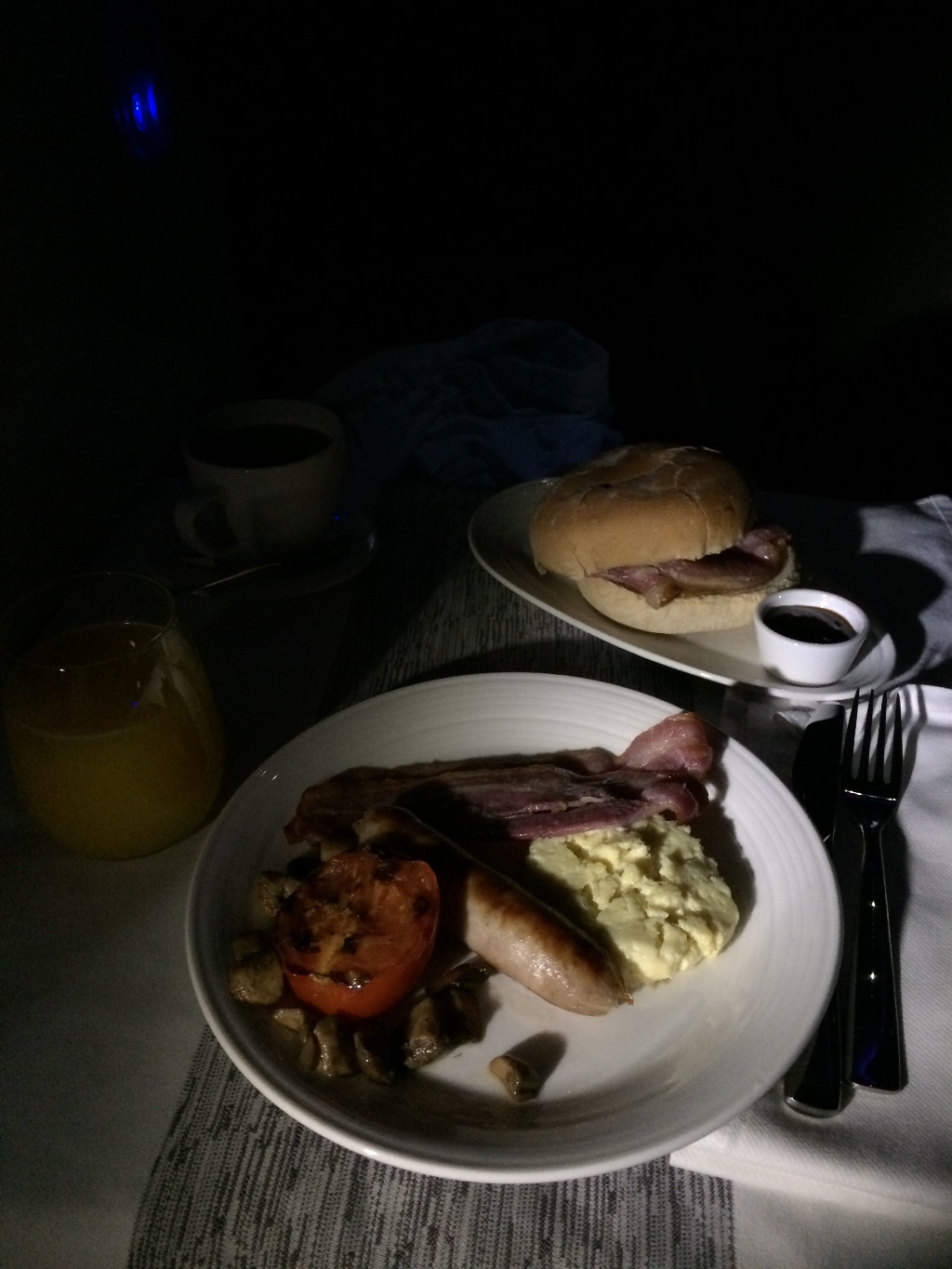 Landing was into a smog ridden Shanghai.

Staff were on hand at the gate looking for connecting pax to Air NZ.

At the airport, I rubbed my eyes as there was something misting them up… in fact, it was smog inside the buildings.

Yes, pollution levels were at an all time high!

A very very long walk to Customs and Baggage, and then through to the MagLev station, for a fast journey to the city. 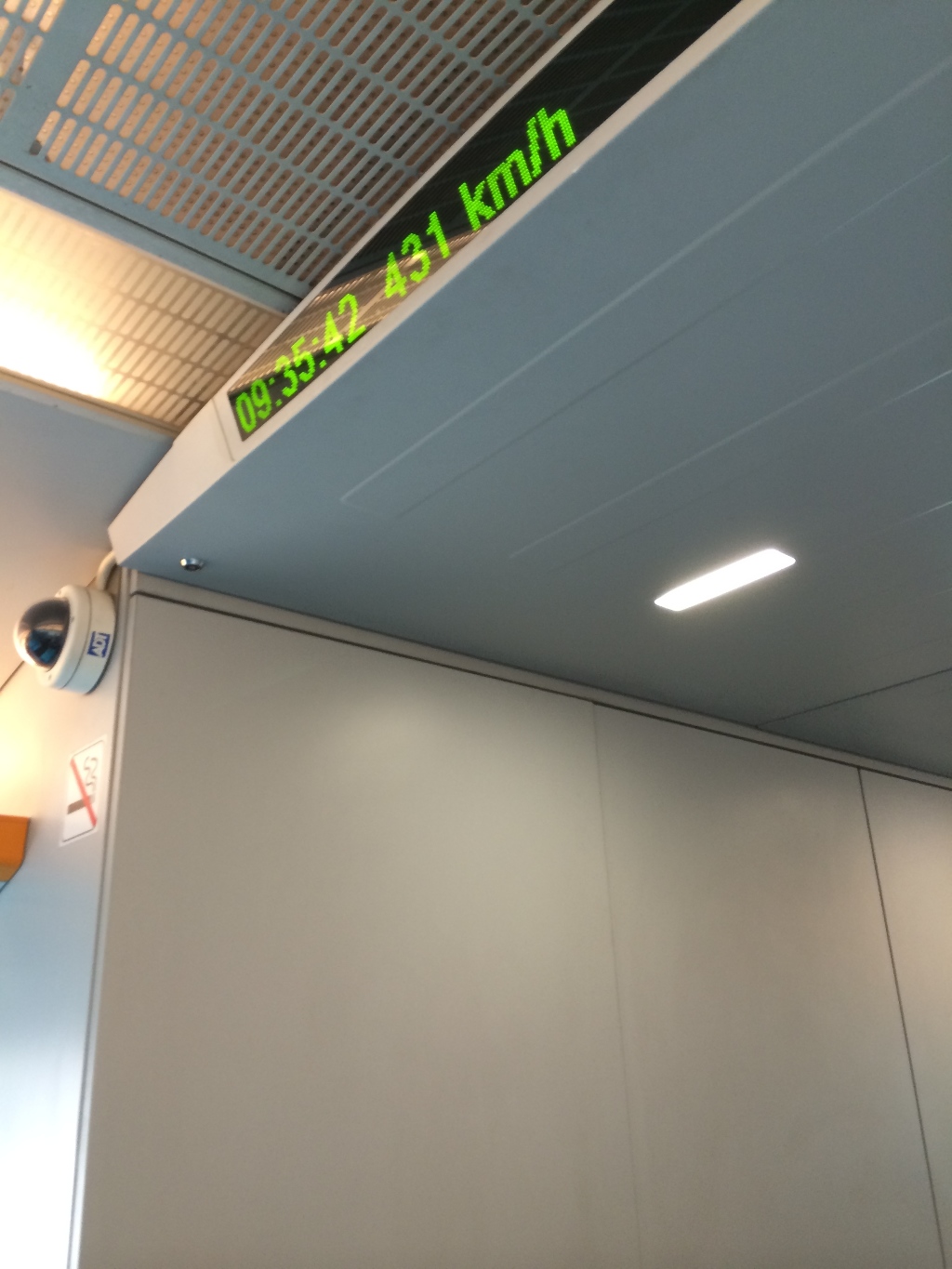 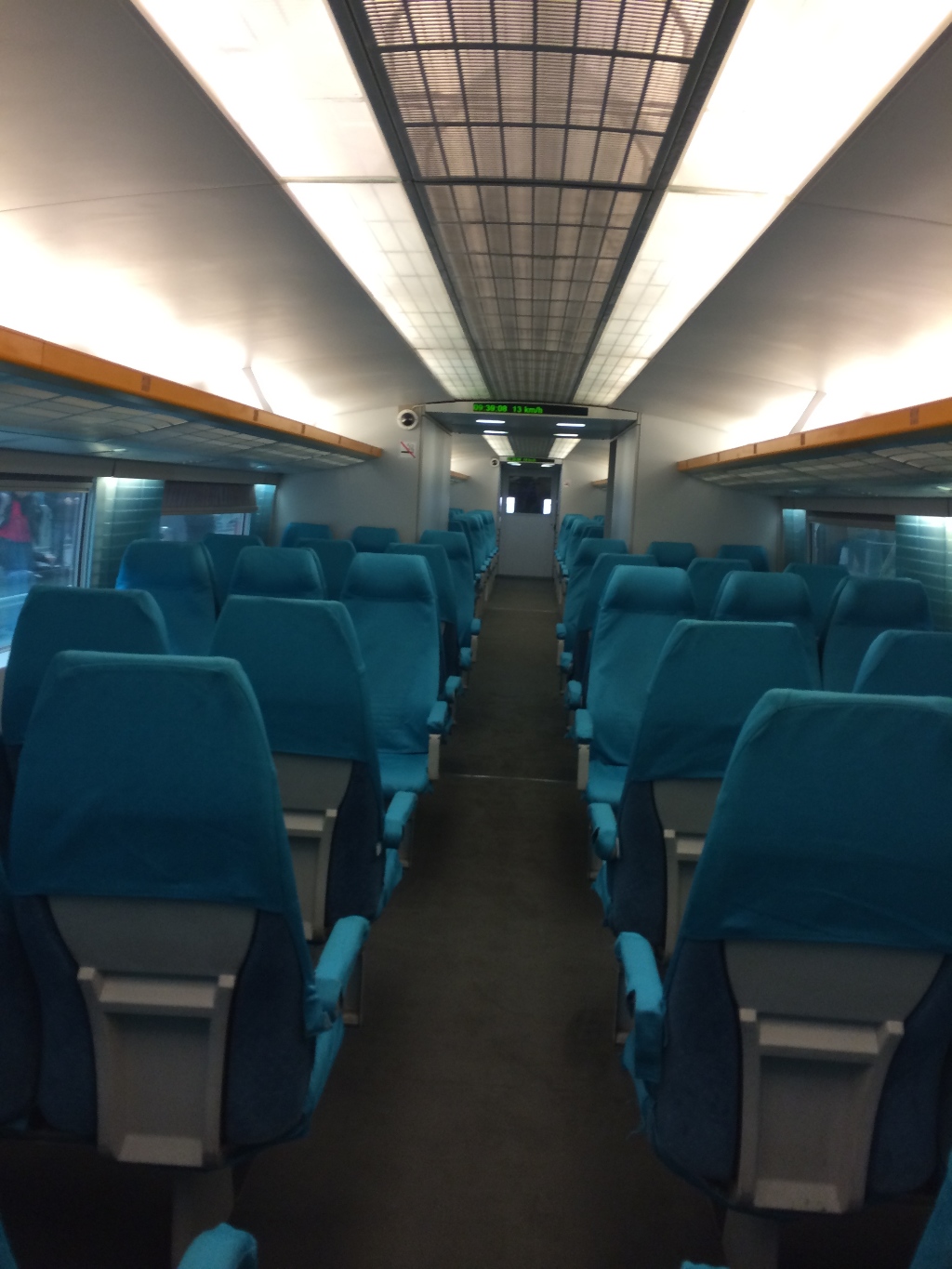 Finally, a look at the amenity kit. It's not great. 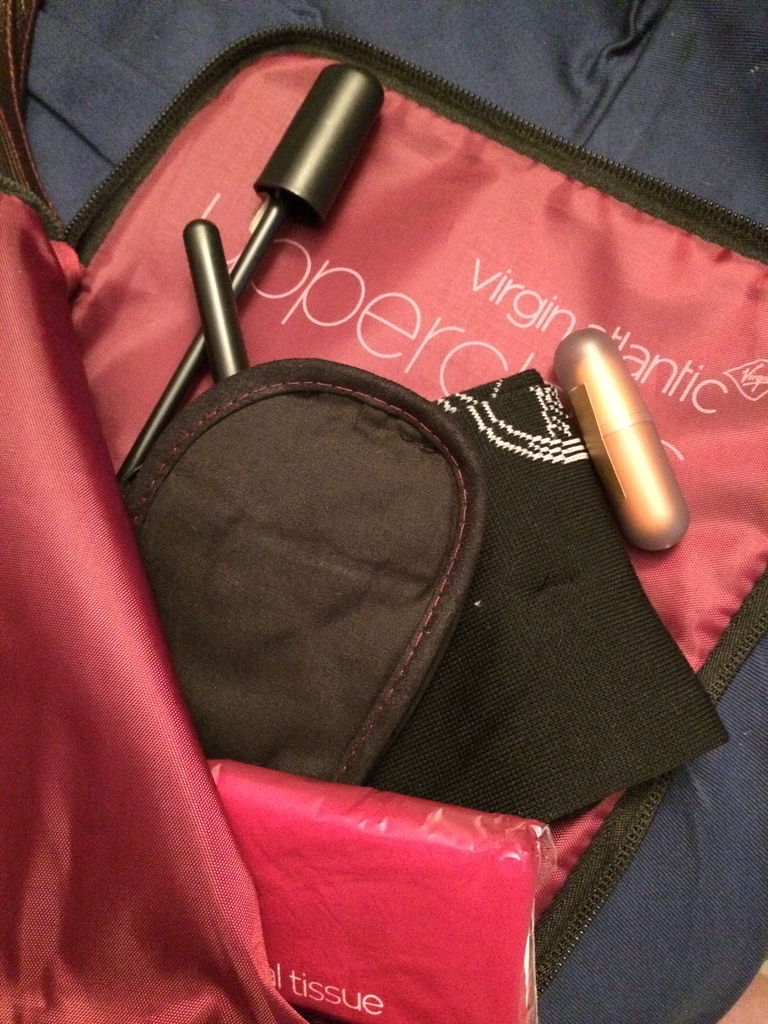 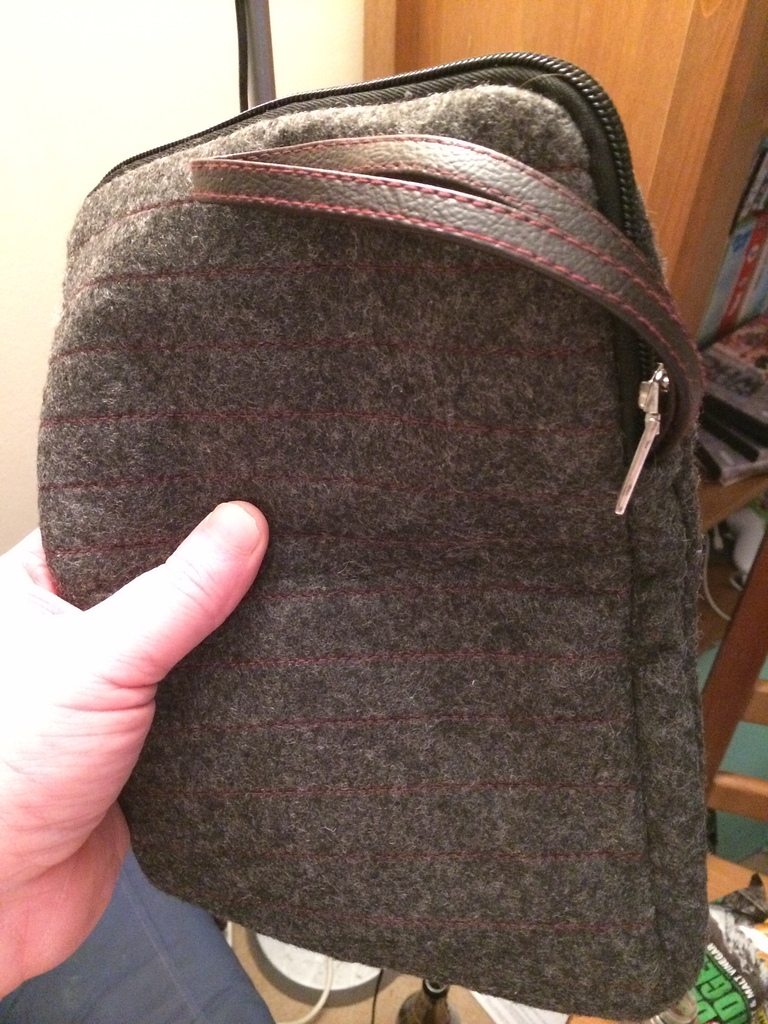 The contributors of Flight-Report published 4 reviews of 3 airlines on the route London (LHR) → Shanghai (PVG).

The airline with the best average rating is Virgin Atlantic with 8.2/10.

The average flight time is 11 hours and 16 minutes.