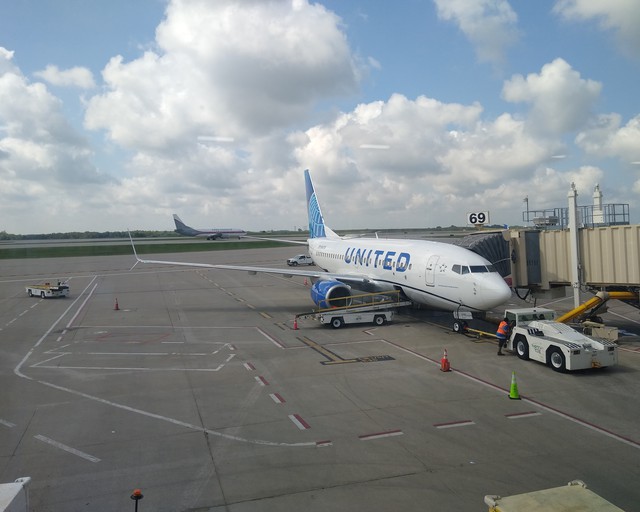 #50 out of 72 Airlines A minimum of 10 flight-reports within the past two years is required to appear in the rankings. 368 reviews

Hello everyone, and welcome to another trip report!
As promised, I have been working on my most recent flight report with United Airlines, and this is a review of my trip from Kansas City, Missouri to Newark, New Jersey.
I hope you enjoy and wish you a great rest of the week! :) 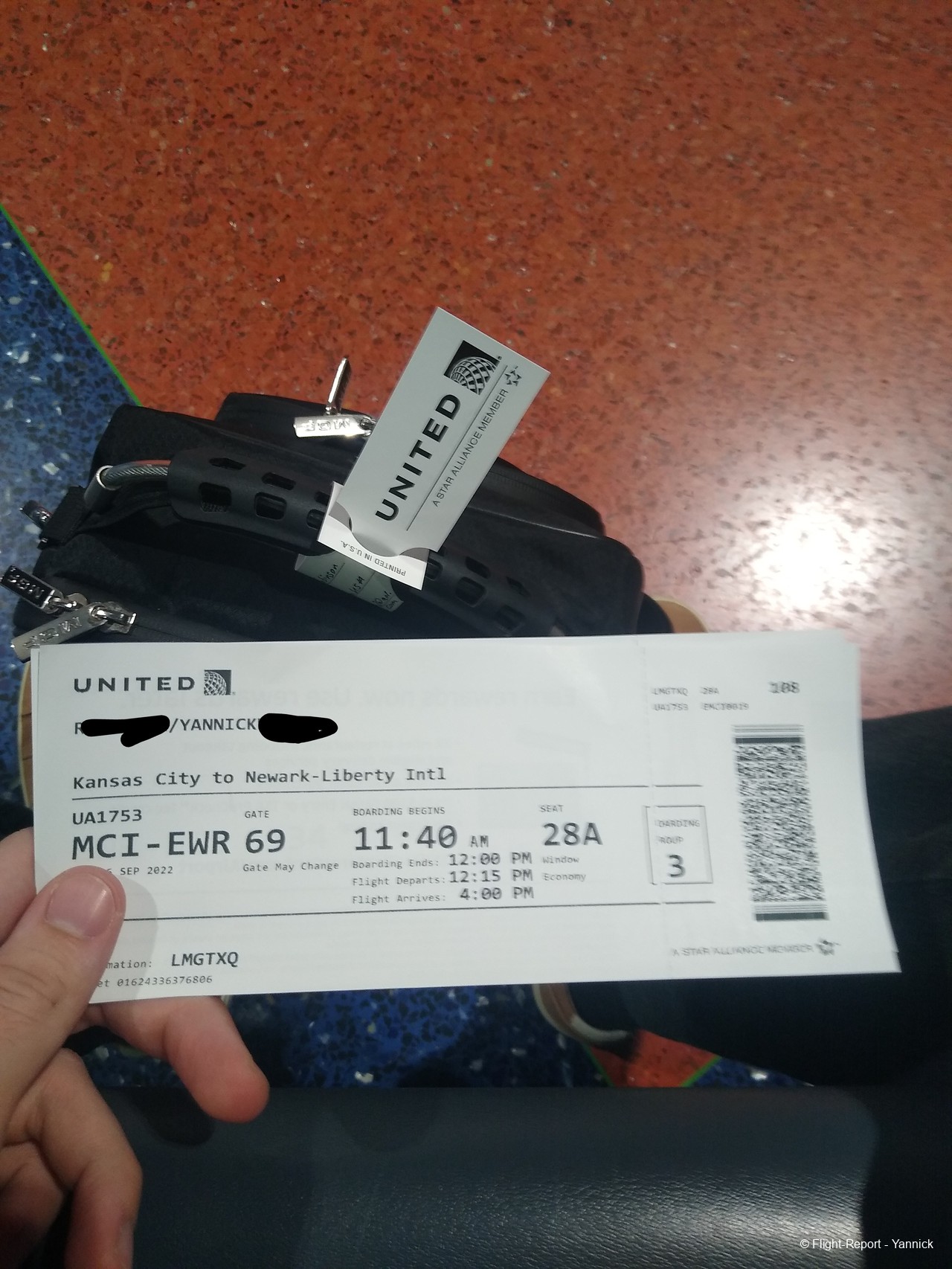 The occasion for this trip was that my Mom was flying from Newark to Germany, via Oslo, Norway that day, and I decided to get on the next available flight and say one last 'good-bye'. Me showing up at Newark Liberty International Airport was meant to be a surprise, but then she found out, haha :D Still, I was glad that I was able to fly! :) This trip, however, was a bit different from my usual flights, because I would fly back to Kansas City on the same day (flight report of that trip coming soon :)), so I did not check any luggage. All I had was a small carry-on bag with my iPad and something to read. I used the self-checkin machine at KCI Airport, and quickly got my boarding pass (I still stick with paper rather than digital passes :)). 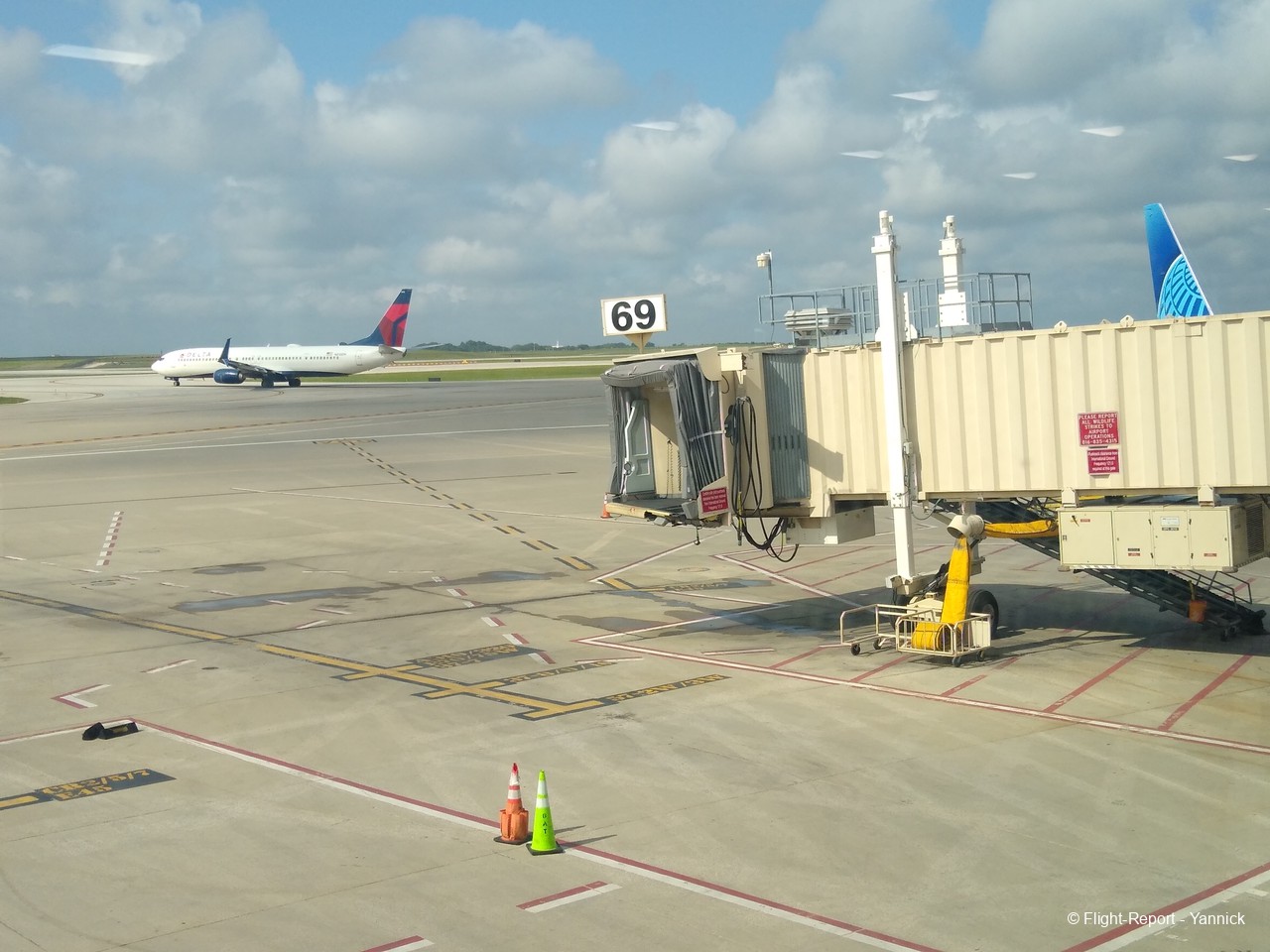 Before going through security and heading to the gate, I decided to hang out in the entrance area of the terminal, since I had some time.
There I actually had a good view of my departure gate. My plane, a Boeing 737-700, was still on its way to Newark, on descent into MCI, as
I found out on flightaware.com. Meanwhile, I did some ''plane-spotting.'' :) On the left you can see a Delta Air Lines Boeing 737 heading to Atlanta, Georgia. On the right, behind the jet bridge, is the tail of a United 737 getting ready for its flight to Houston, Texas. 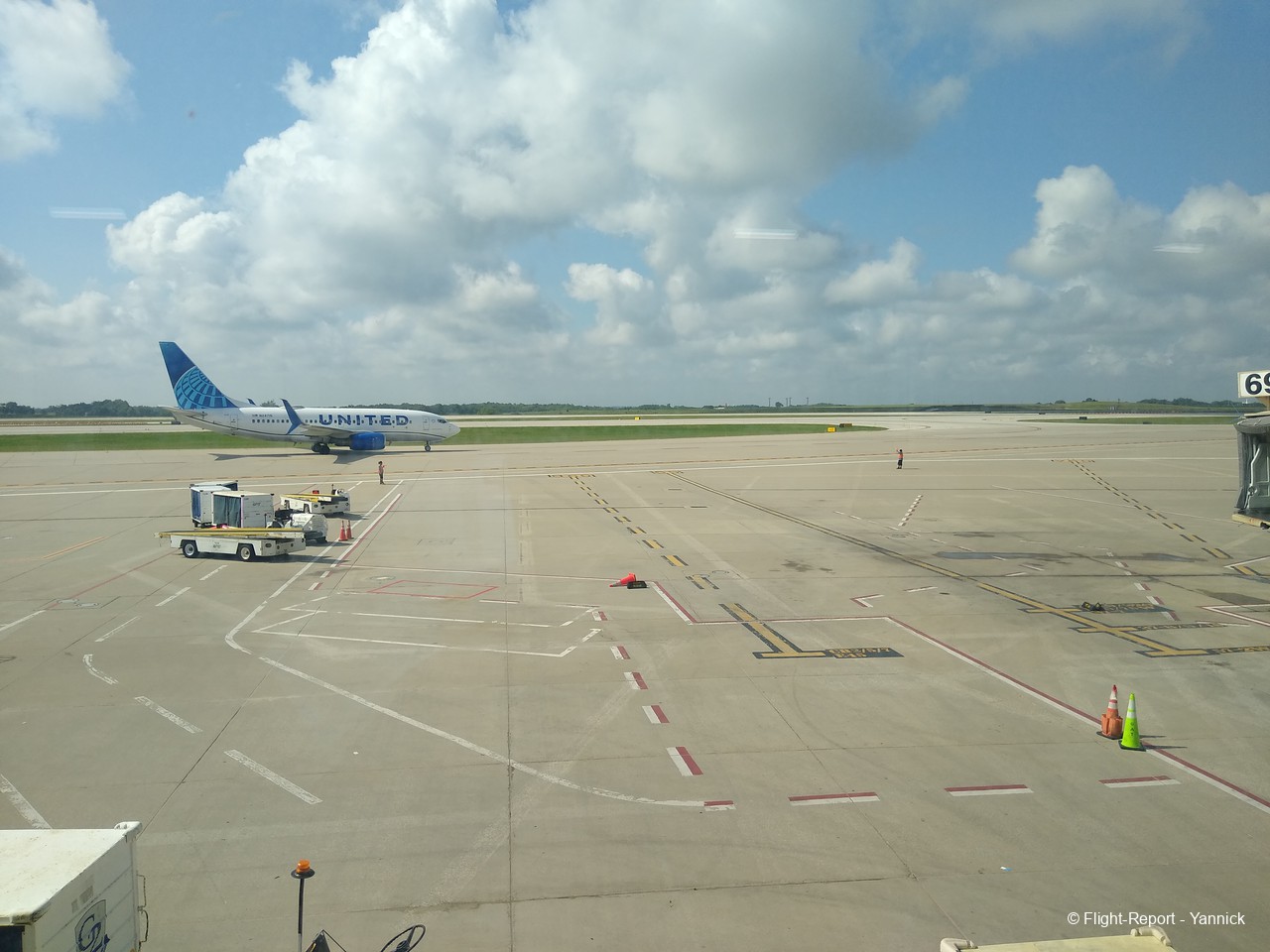 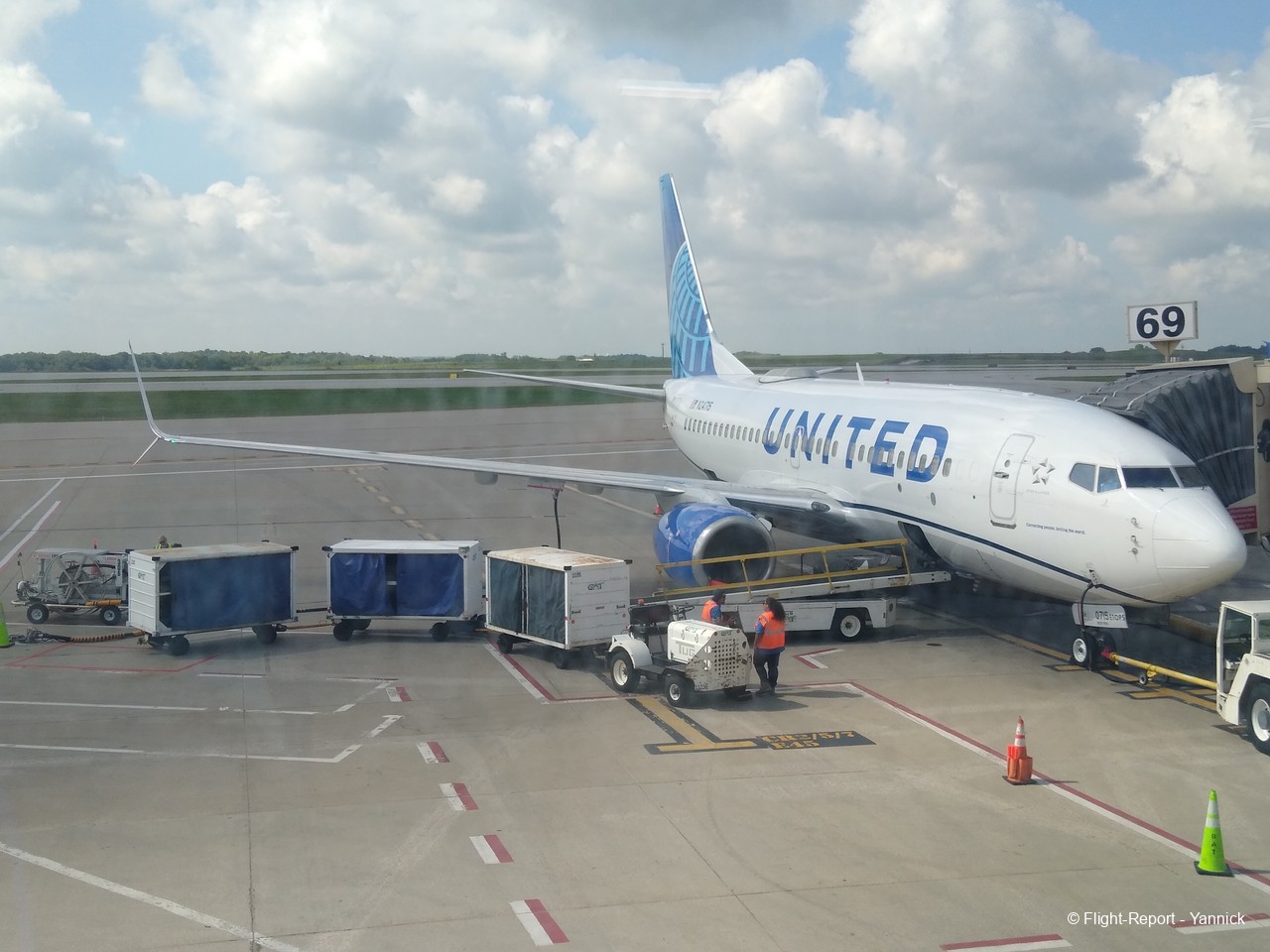 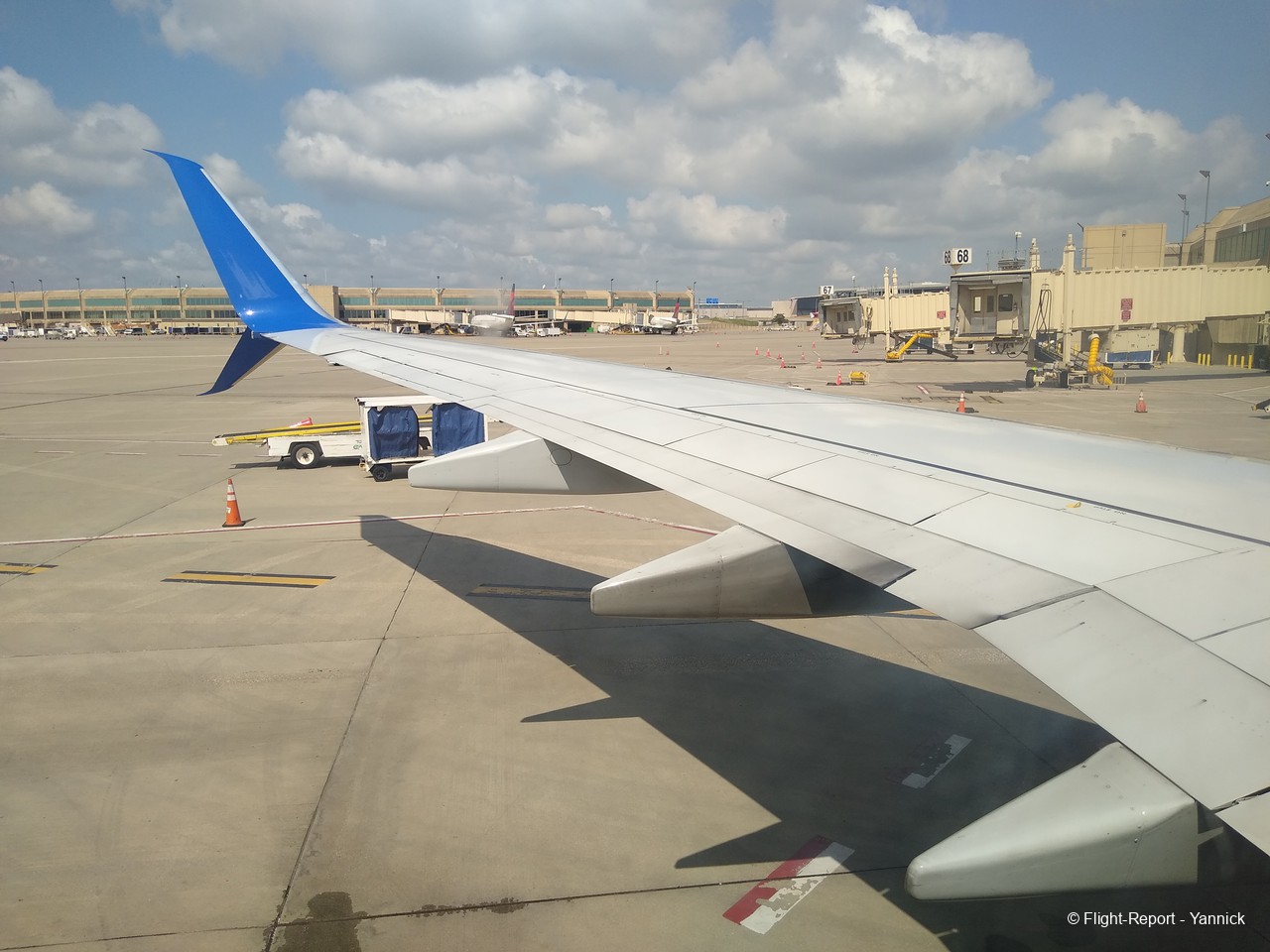 Boarding began on time at 11:40 am, and I made my way to seat 28A, but would soon move one row back, because a lady asked me if I was willing to switch seats, so she could sit next to her husband. I agreed, and still had a window seat. :) 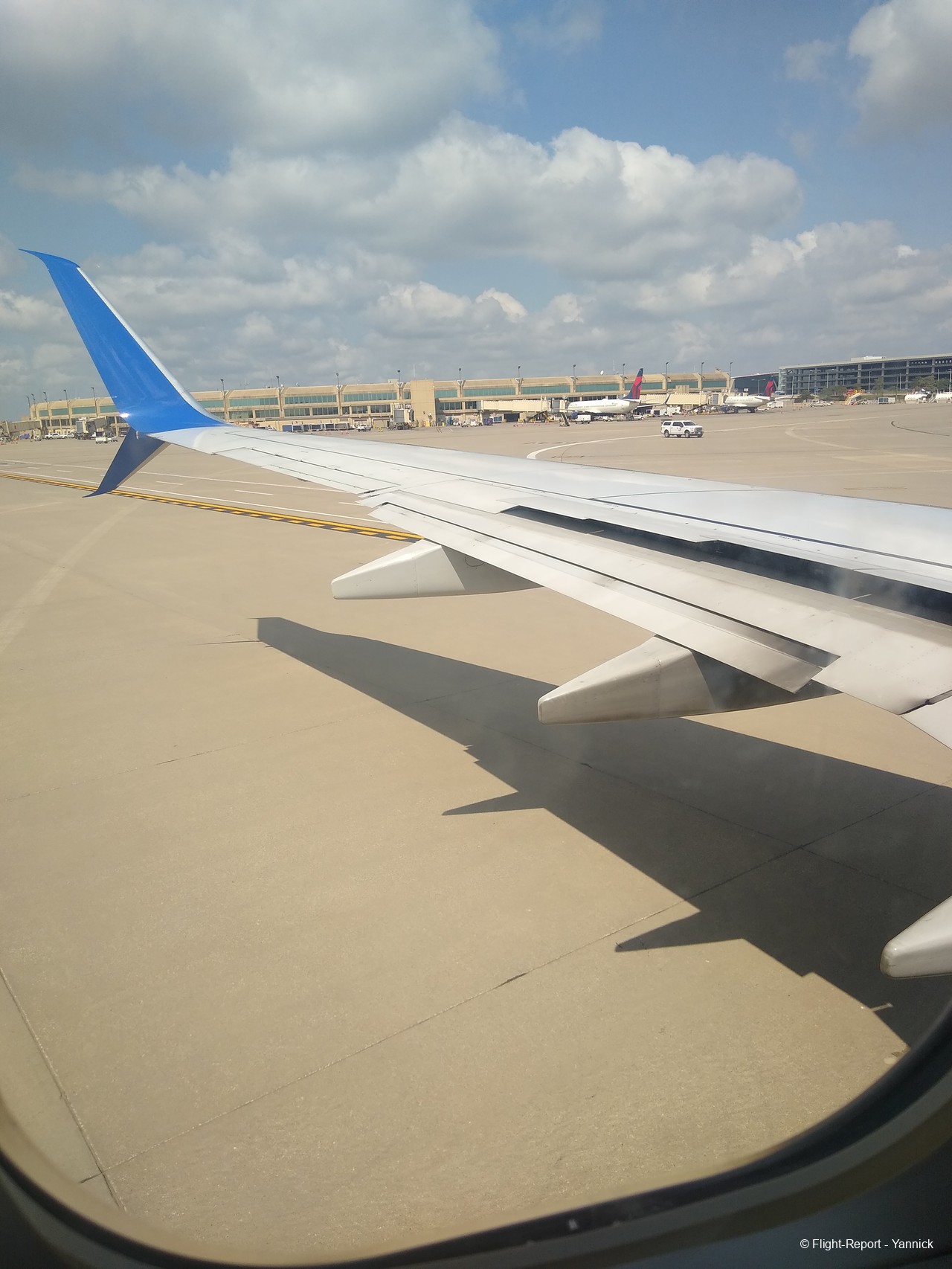 Boarding was completed soon afterwards, and we pushed back on time. After extending the flaps and checking the controls, we received clearance to taxi to Runway 01R. 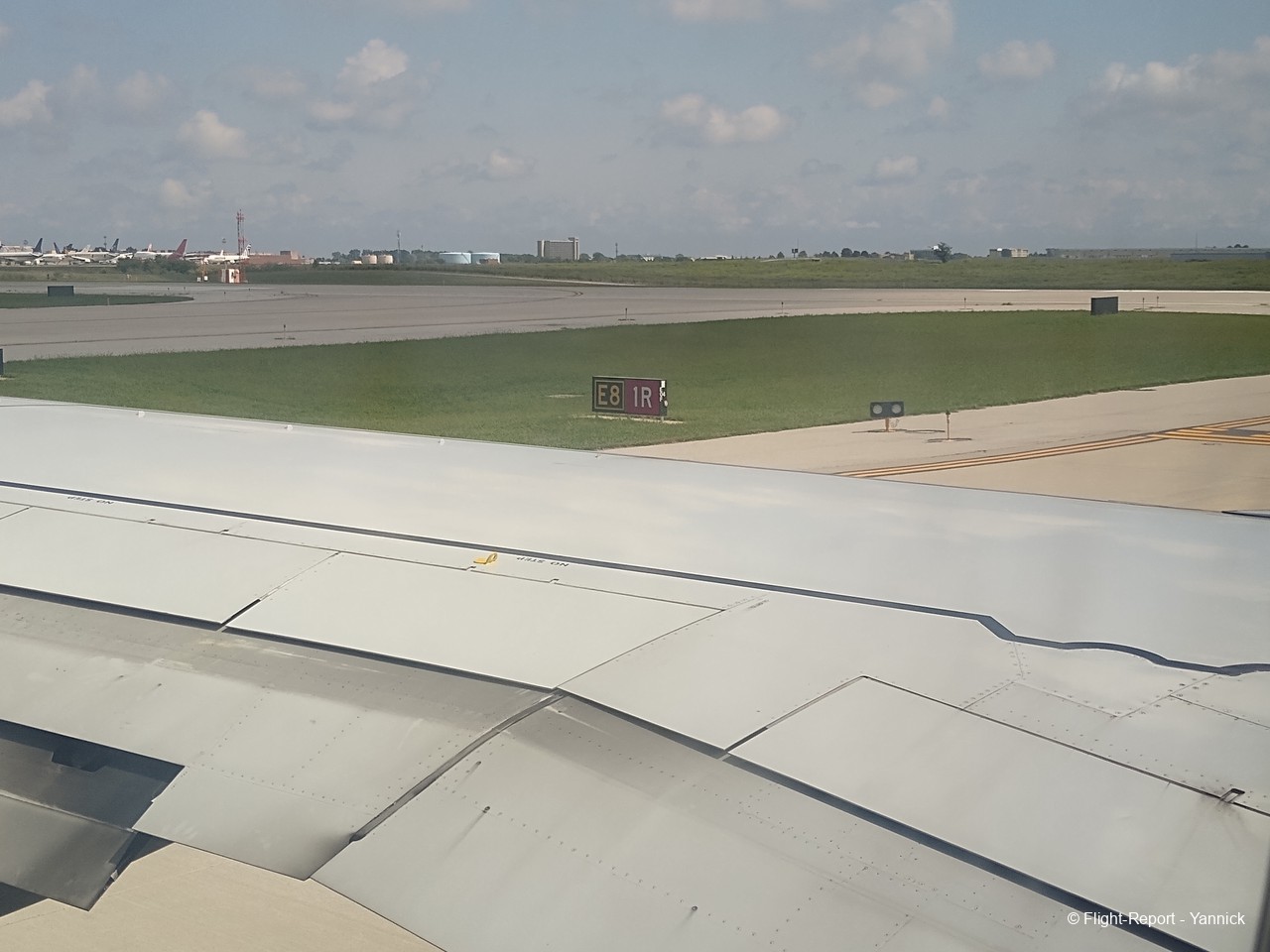 "Flight attendants, please be seated for departure." :) At that point, you know that you are close to the runway. :)
The Captain announced that our flight time would be about 2 hours and 30 minutes. I like flying East, since the flights are not quite as long as flying West.

Here is a video of the takeoff. Please also stop by my YouTube channel and take a look at my other videos as well! :) 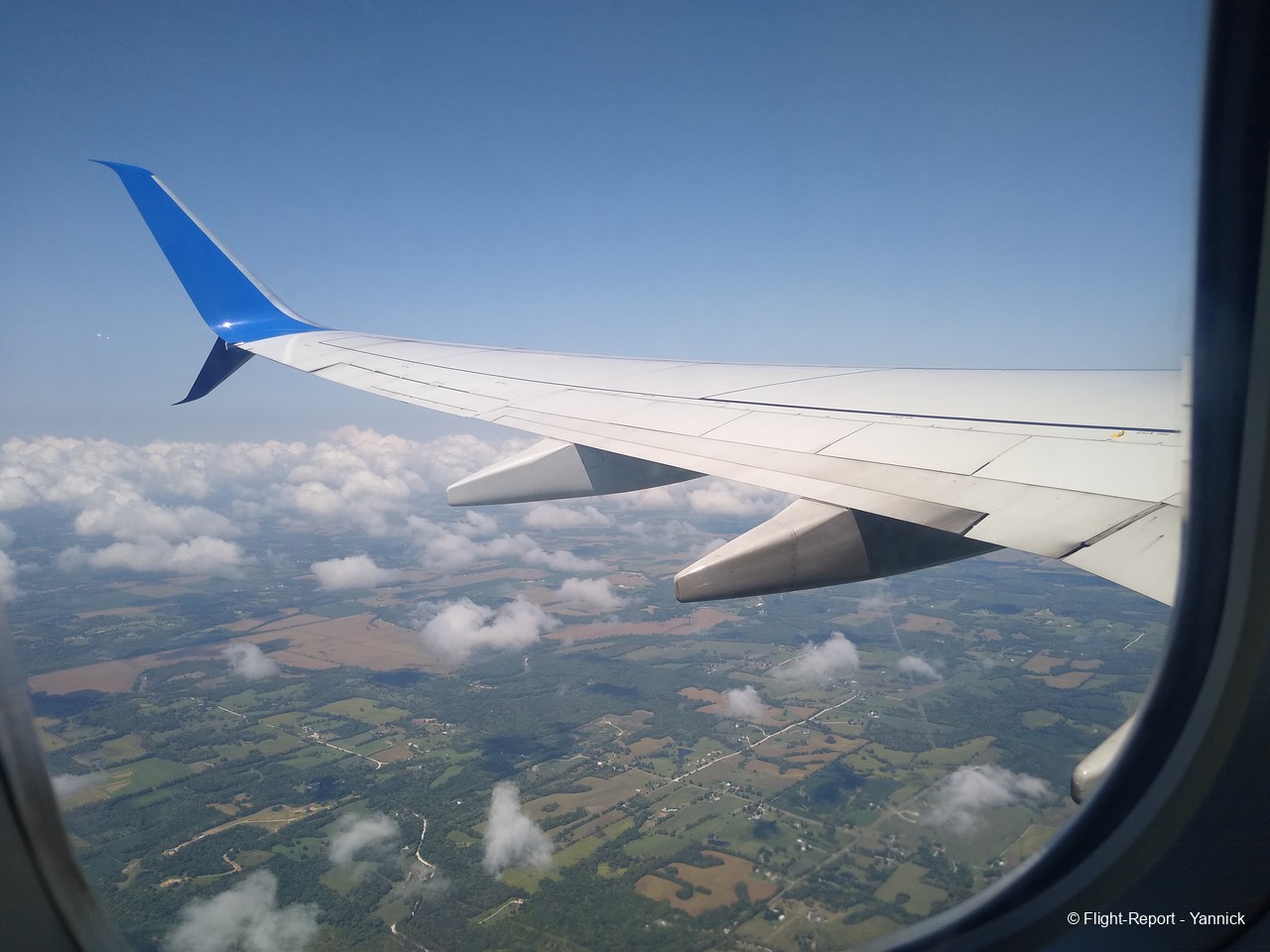 Above the clouds… :) Even though I have already flown countless of times in my life, it never gets old! It is always an exciting experience to feel free like a bird and seeing everything from above! :) 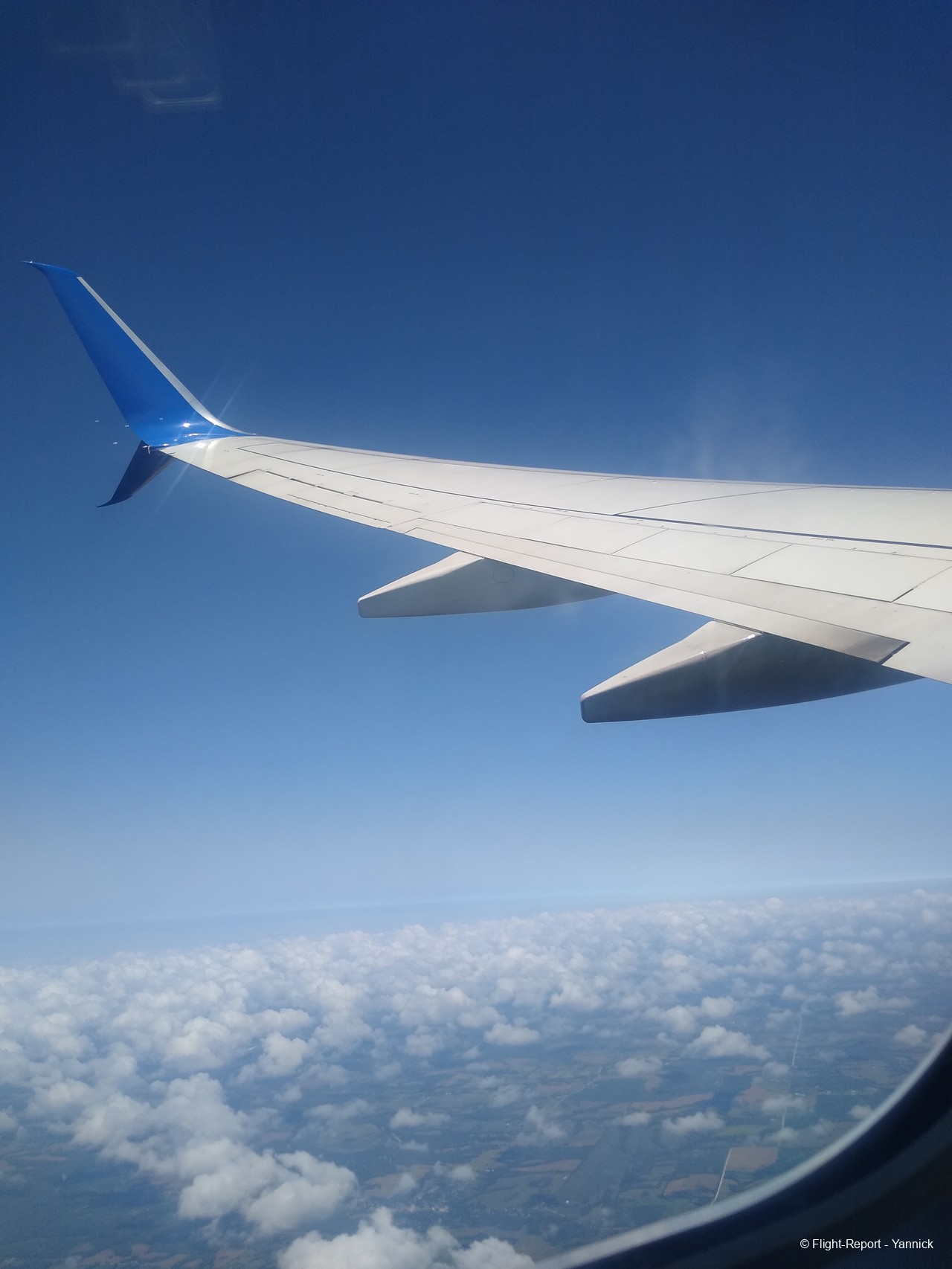 Banking right, onto an Eastern heading towards Newark. You can slowly but surely see more and more clouds, as the weather on the East coast was not so pleasant. :( 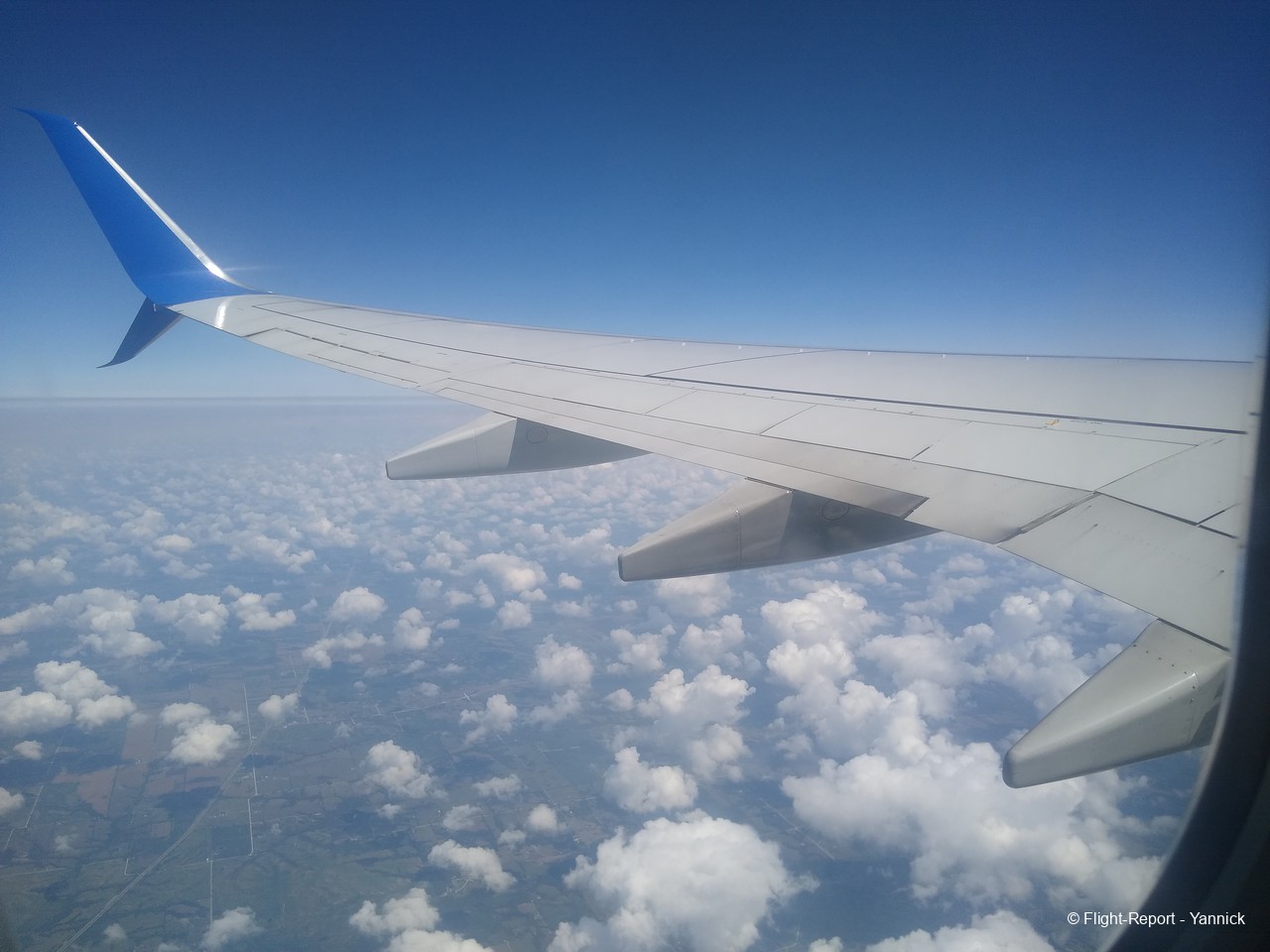 About 20 minutes after takeoff, we reached our cruising altitude of 31,000 feet and the pilots turned off the seatbelt sign. The flight attendants came through the cabin to serve beverages and some snacks. On shorthaul flights, passengers get to choose between pretzels and biscoff.
I chose the biscoff with some coffee. :) 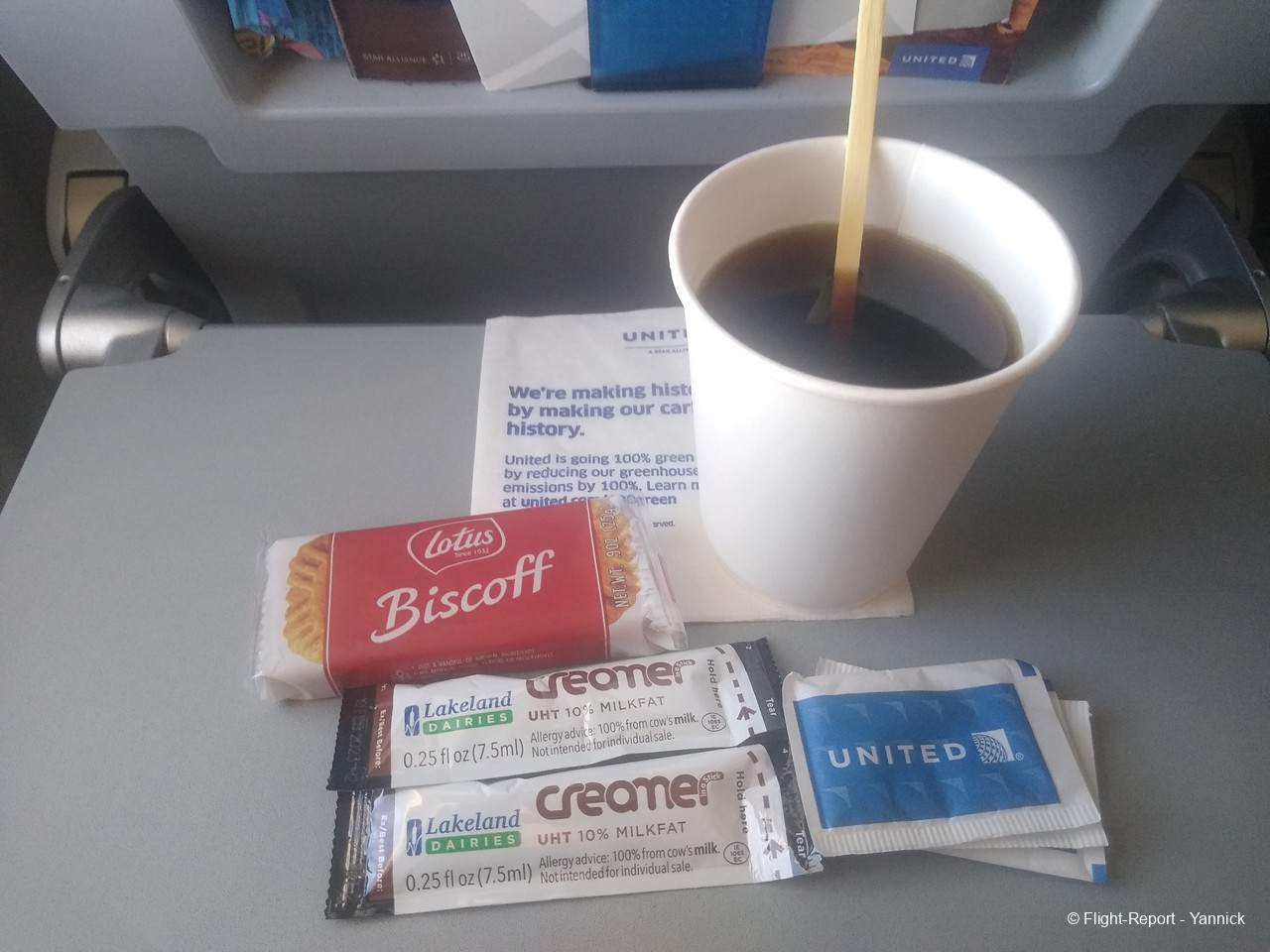 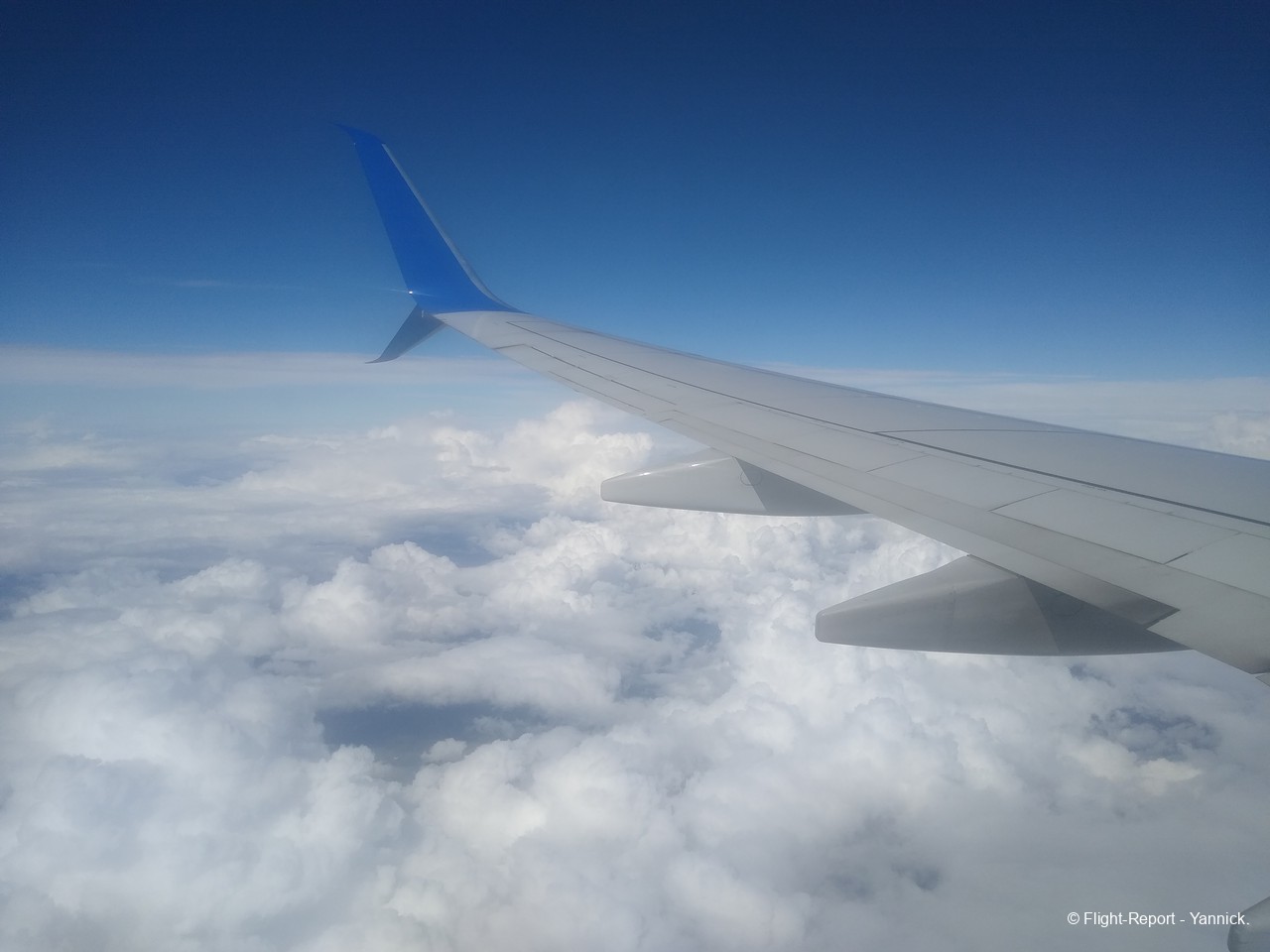 I spent the majority of the flight listening to music and posting pictures and videos of the flight on my social media pages. IFE screens were there too, but there was only DIRECTV, so I wouldn't give the entertainment a 10, but still, I believe that United is improving significantly in every way! :)
As we approached Pennsylvania, we hit some turbulence and the seat belt sign was turned back on. As you can see, the weather on the East side of the US was the complete opposite of the weather further West that day. I had never been to Newark before, so I was kind of hoping to get to see some parts of NYC during the approach, but that wasn't the case, unfortunately. 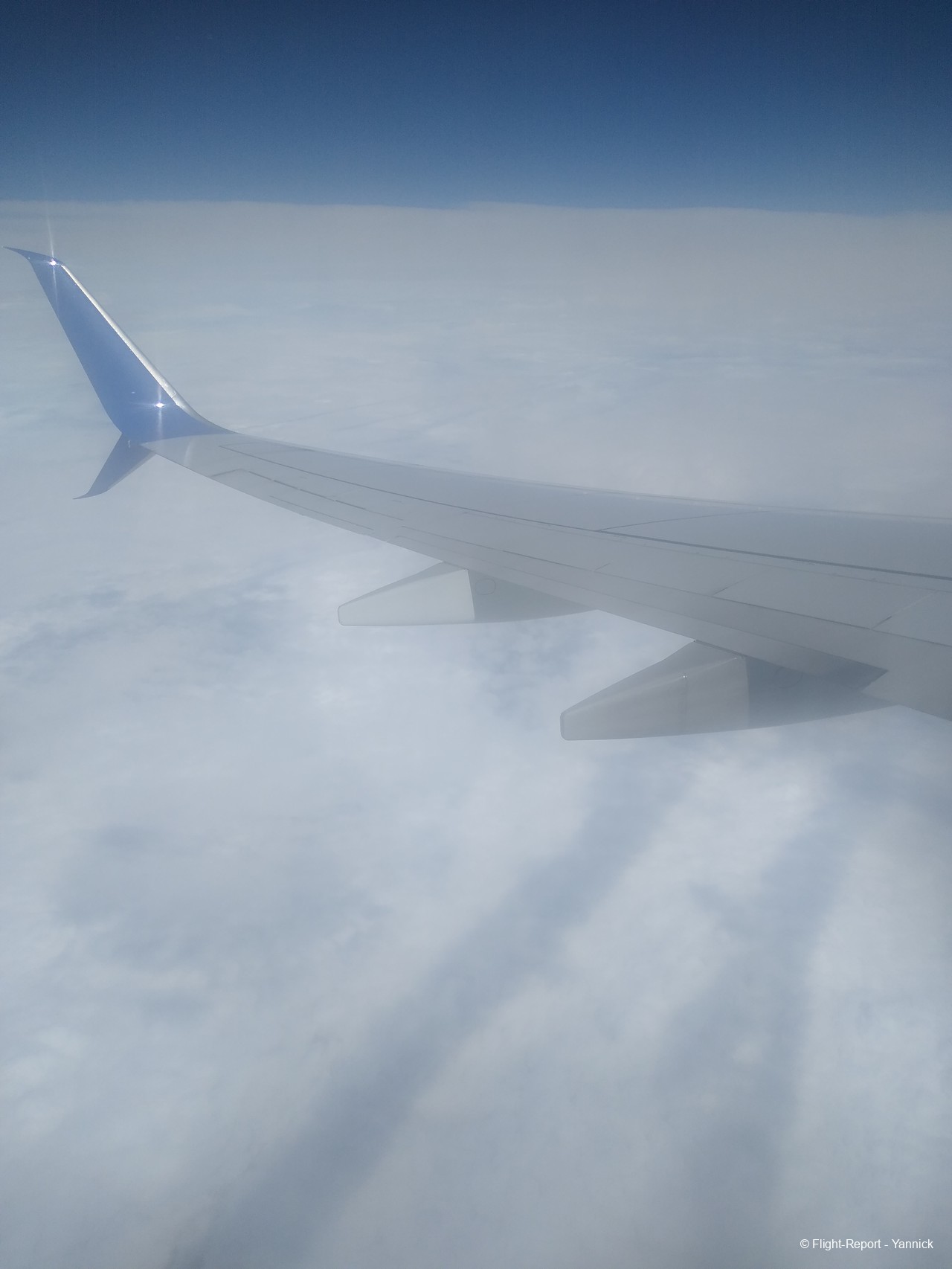 After two hours in the air, the Captain announced our descent into Newark. He reported overcast skies, light rain, and the temperature was 72°F. The ceiling was very low, which meant we landed under so-called "Instrument Flight Rules (IFR)," and we flew an "ILS Approach"
(Instrument Landing System, which guides airplanes safely onto the runway in poor weather conditions). 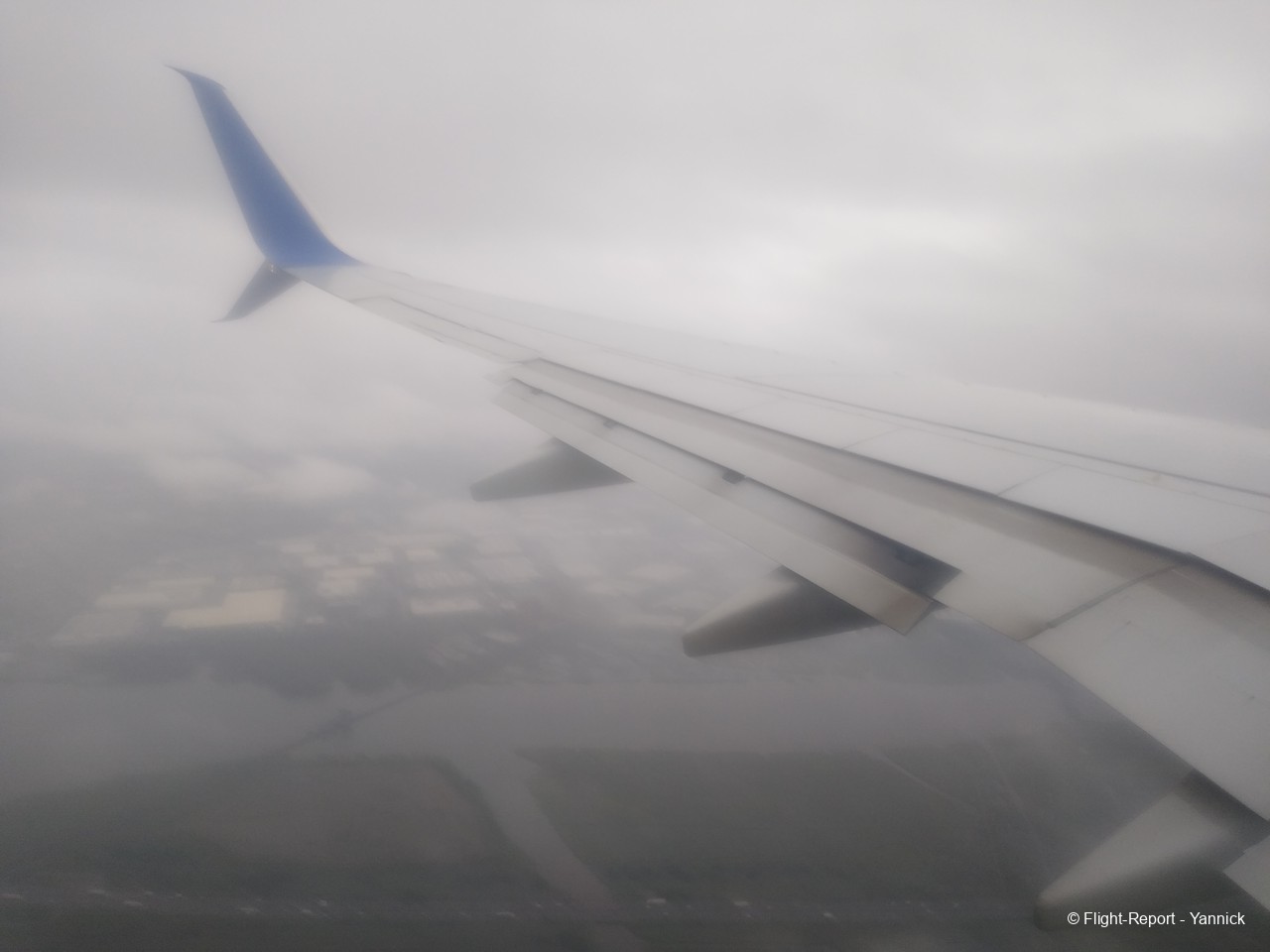 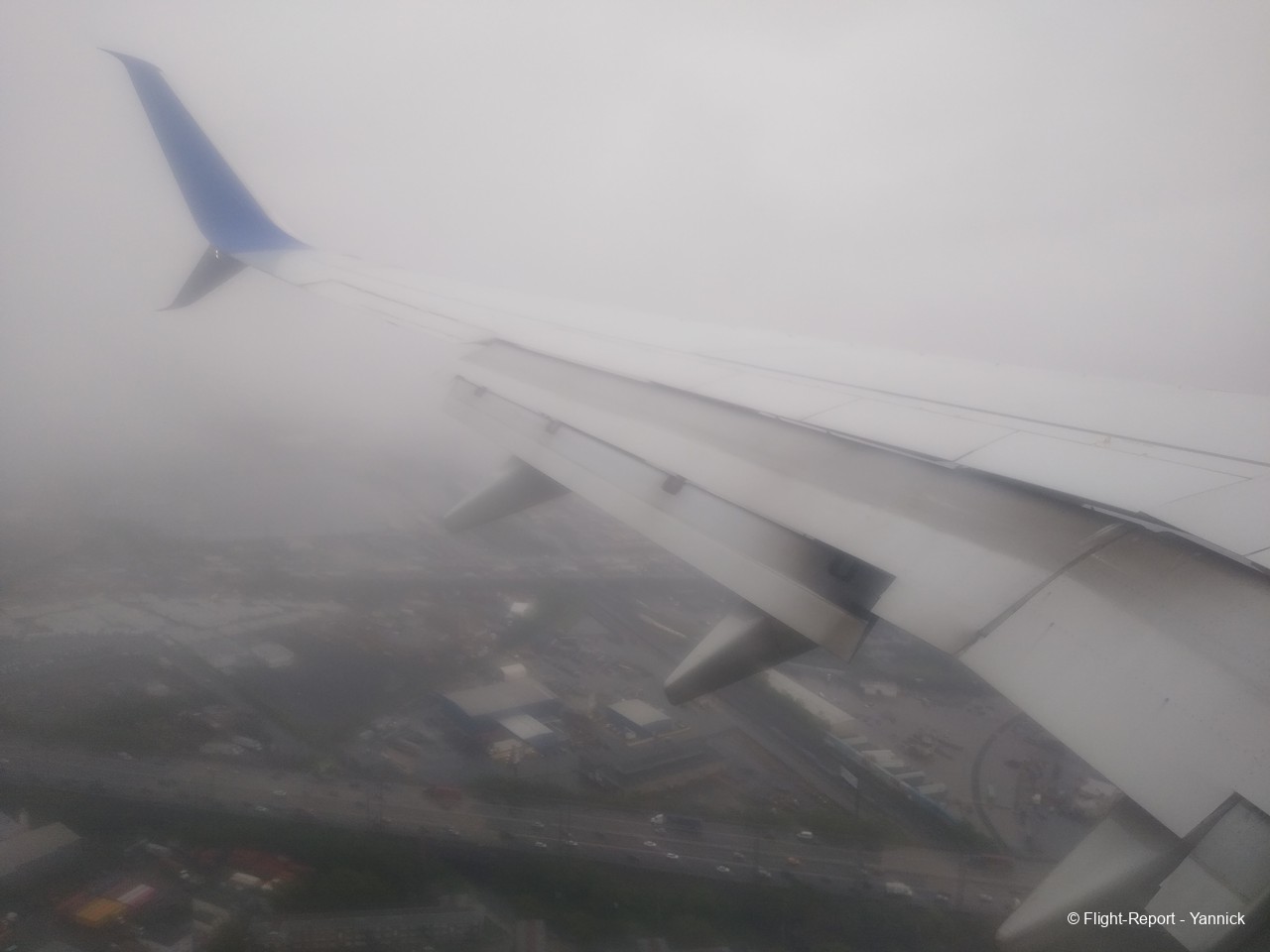 I do apologize for the low quality, it was a bit bumpy during the approach. 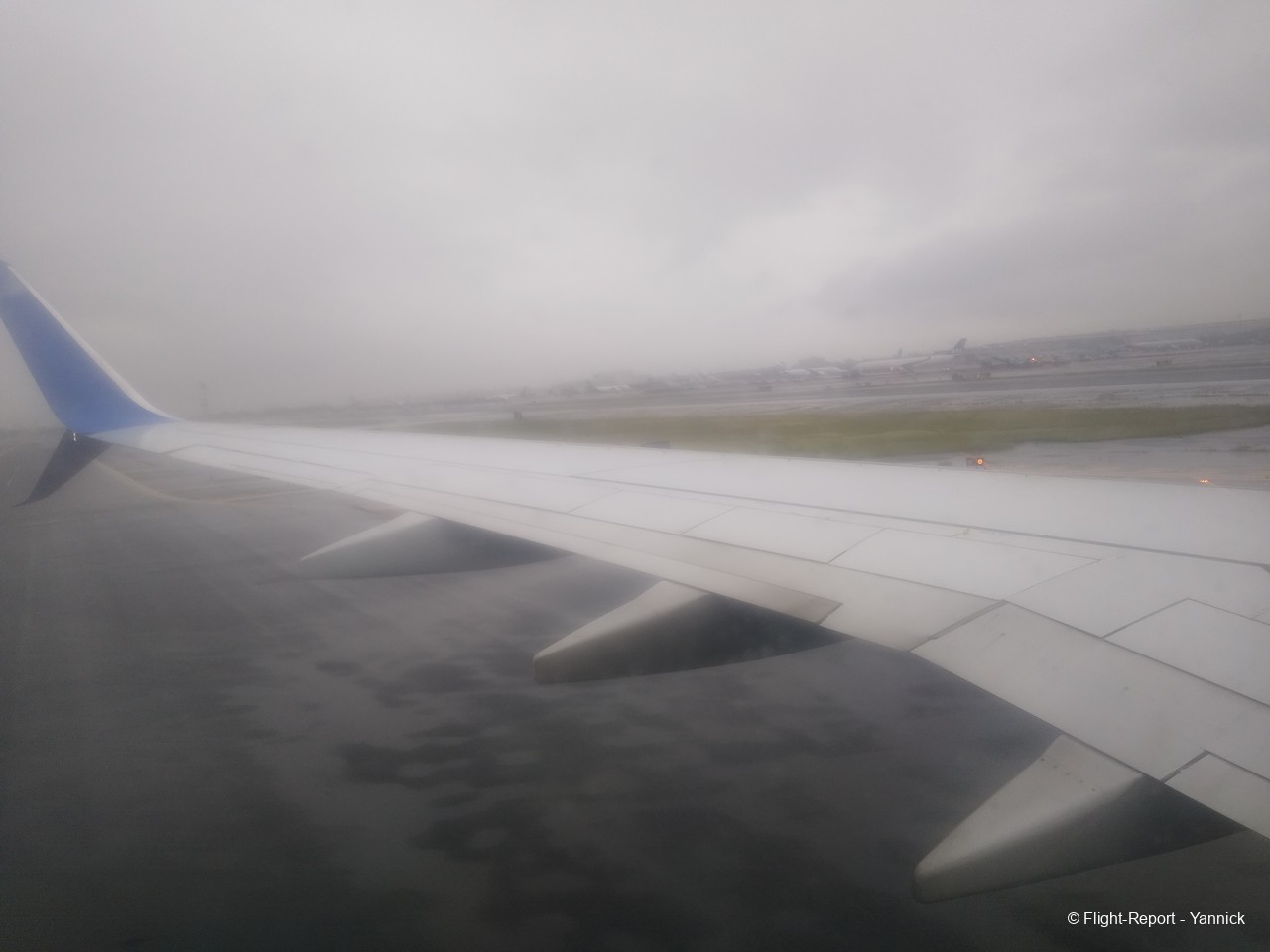 Holding short of Runway 22R. A Boeing 777 was taking off, but unfortunately I didn't have my camera at the right place at that moment. :( 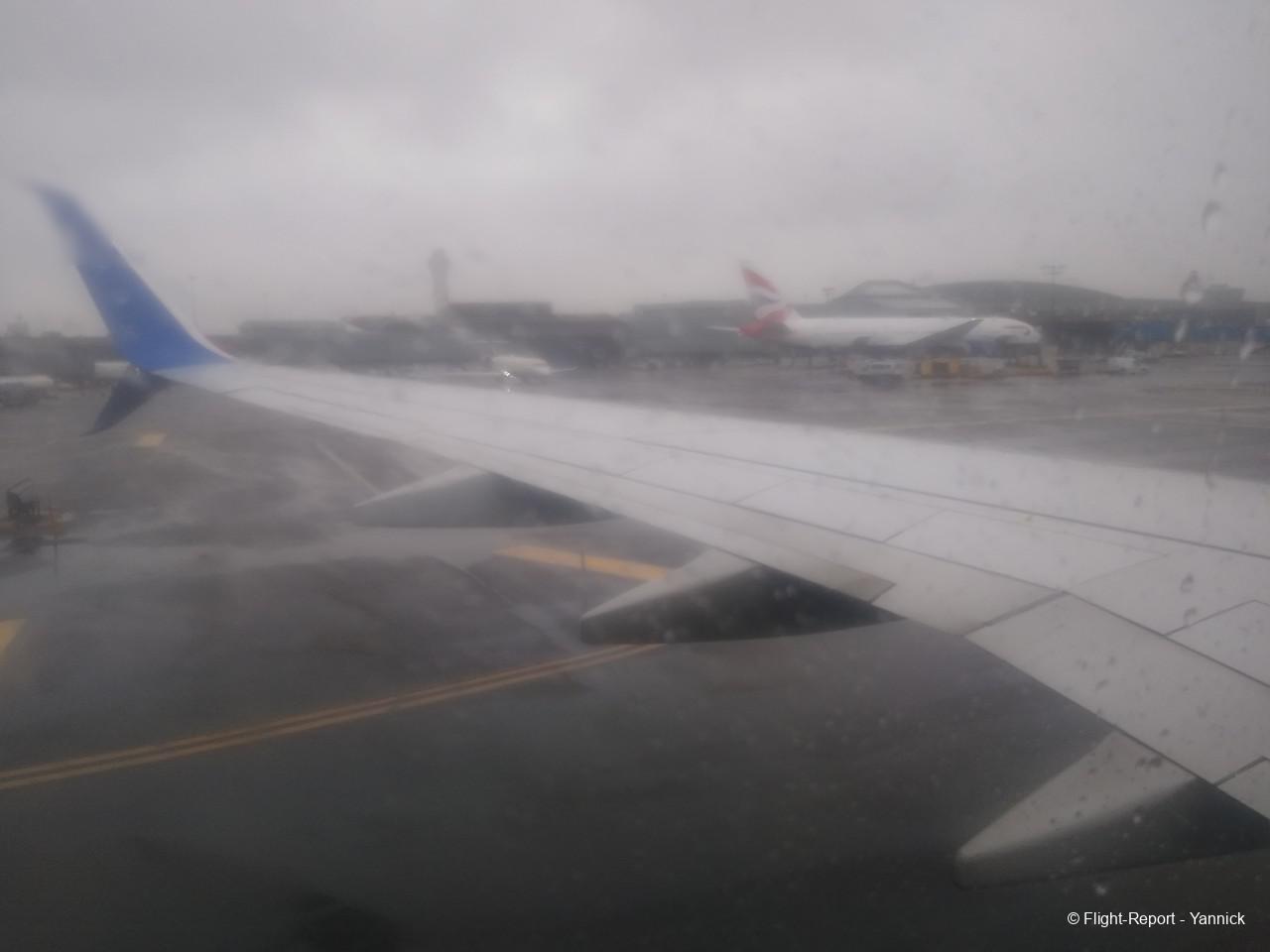 On our way to the gate we rolled past some big jets, such as this British Airways Boeing 777, being prepared for its return flight to
London Heathrow. 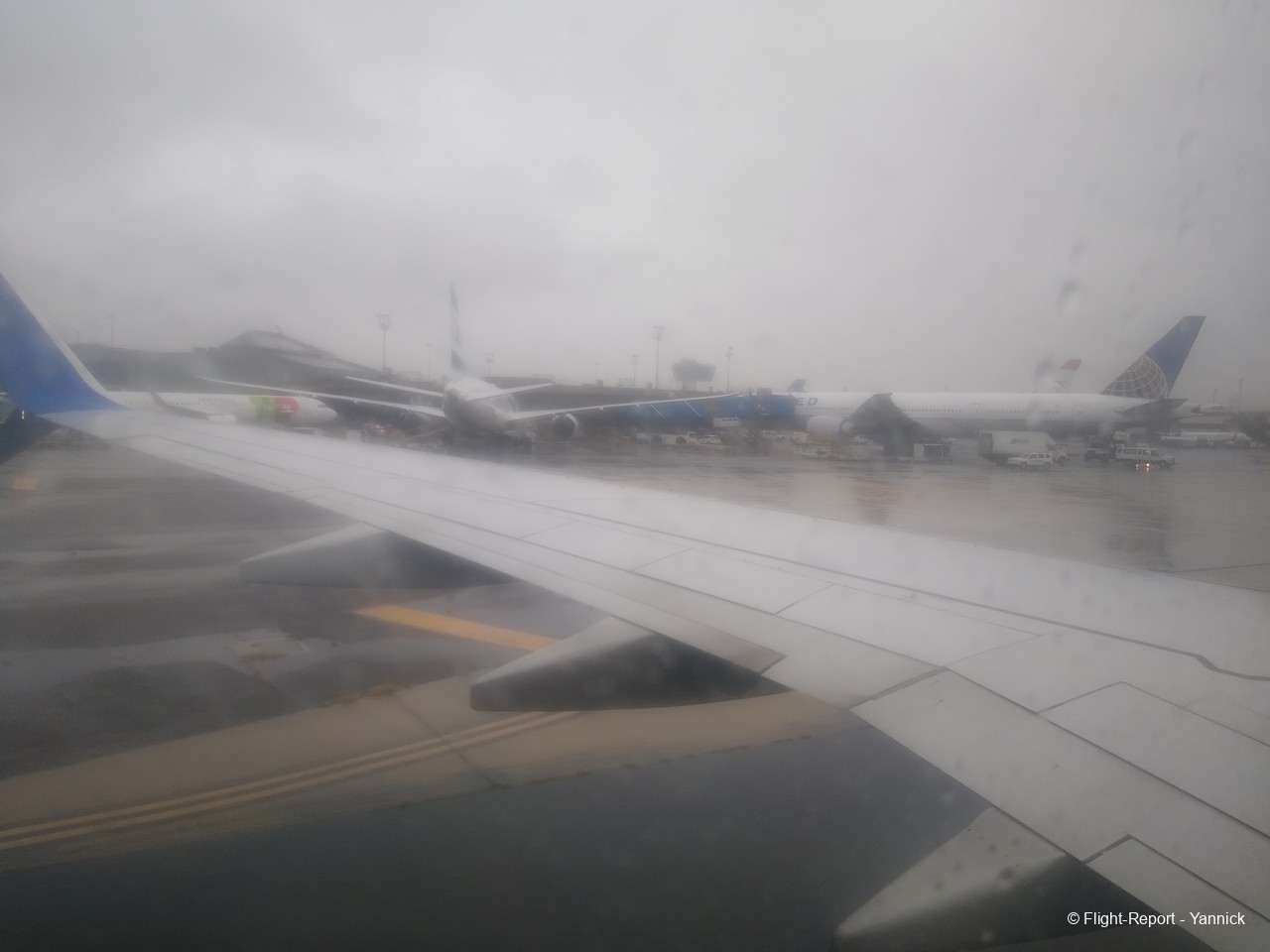 A United Airlines Boeing 777-300 on the right, and an El Al Boeing 787 Dreamliner on the left, bound for Tel Aviv, Israel. 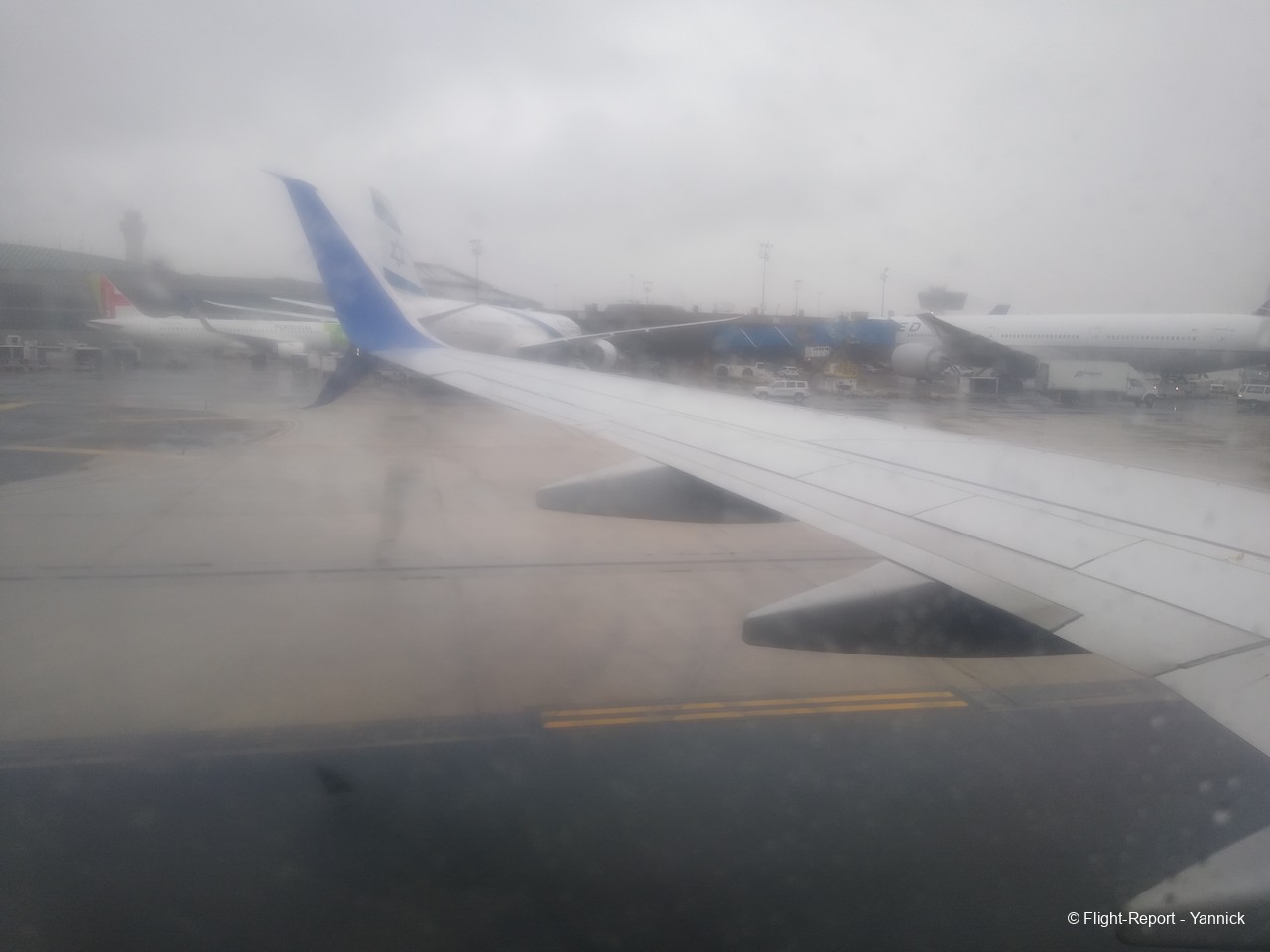 TAP Air Portugal (on the far left) also has an Airbus A321LR (Long Range) in its fleet, and connects Lisbon with Newark. After about a 10-minute taxi, we reached Concourse C, United's Terminal at EWR. 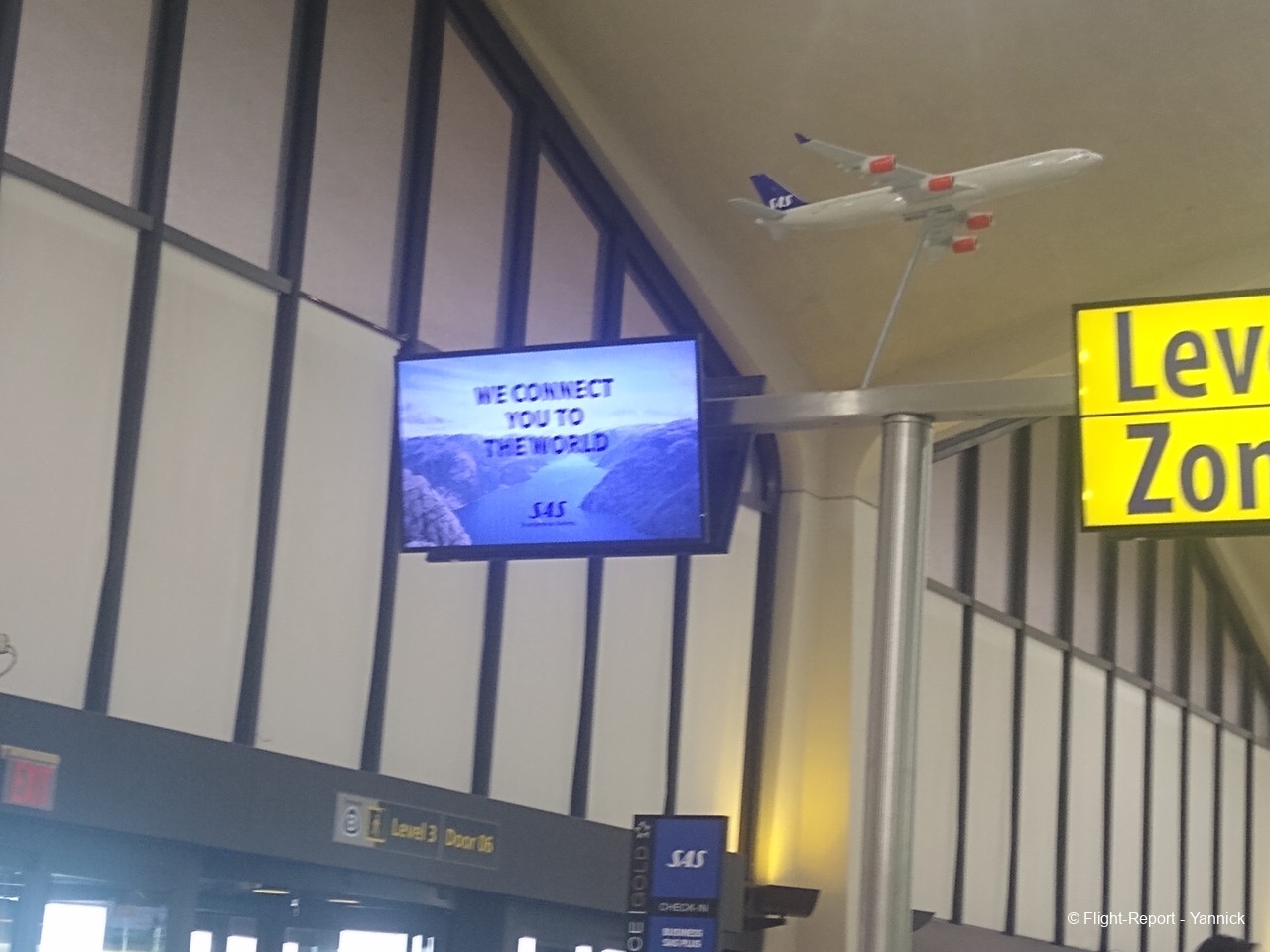 After getting off the plane, I called my parents, and we decided to meet at the SAS Check-in counter. Scandinavian Airlines (SAS) was going to be my Mom's airline to Europe, and since they operate out of Newark's Terminal B, I had to get on the train and change concourses. The check-in went well for her, but as the time approached evening, the weather conditions got worse, delaying multiple flights, including ours.
While her flight to Oslo was scheduled to depart at 6:55 pm local time, it actually departed at close to 8 pm, which was my scheduled departure time back to MCI, which in the end took off at 9:30 pm. But we didn't make a big deal out of it, and enjoyed our last couple of hours together. :) 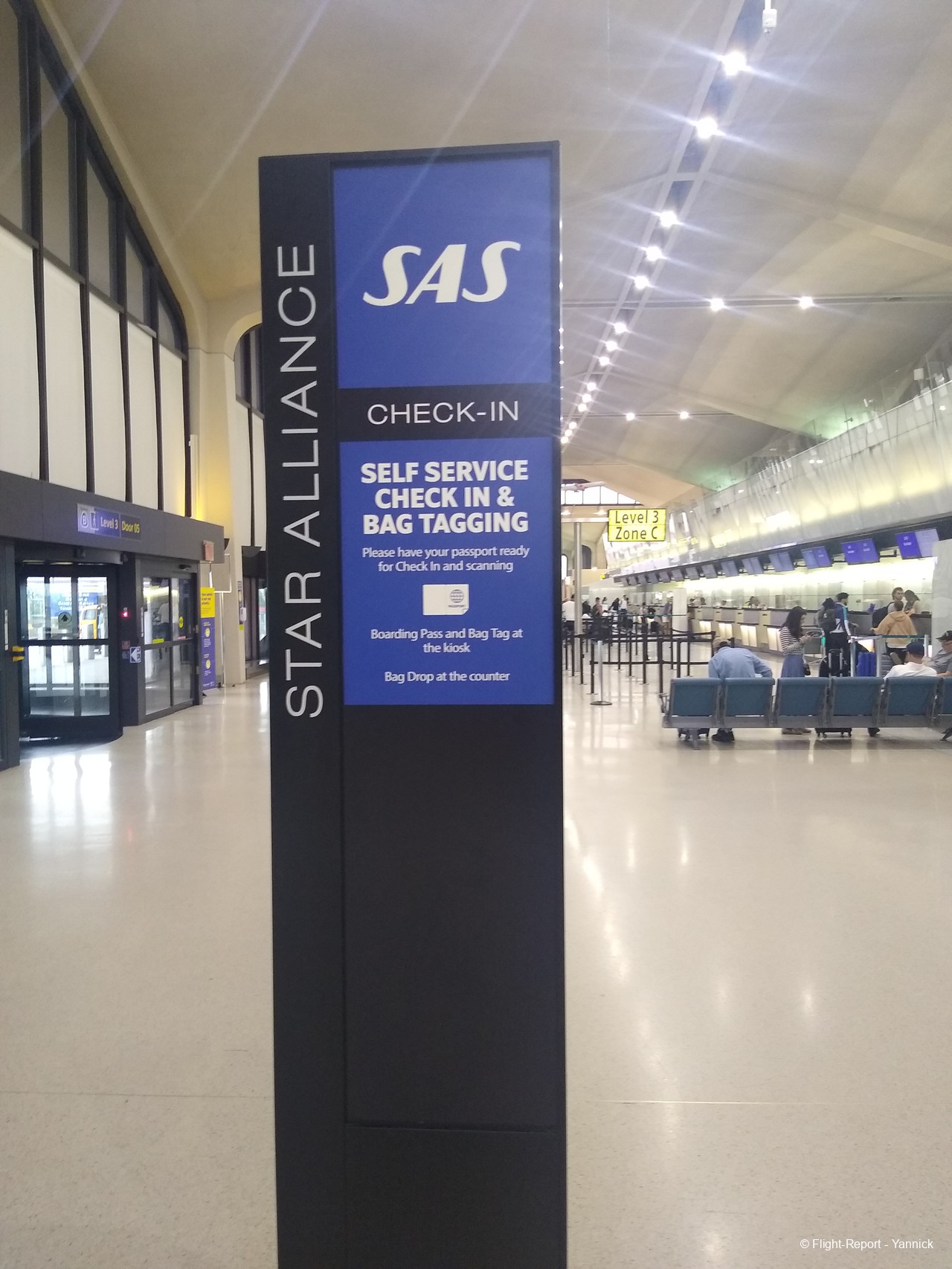 I too have flown SAS before, and I enjoyed it, although I wouldn't say that SAS is my favorite airline, as there is still some room for improvement for them. SAS has repeatedly been dealing with delays, cancellations, and strikes, and it is difficult to say at this point how the situation for the company is going to continue. However, I would be willing to try them out again in the future. :)

In conclusion, I really enjoyed this trip with United, as I have enjoyed the past few trips. There were a couple of downsides, such as the entertainment options on board and a couple of flight attendants were not "super friendly," but of course, I know very well that that does not define the character of all employees. :)
Until next time, United! :)