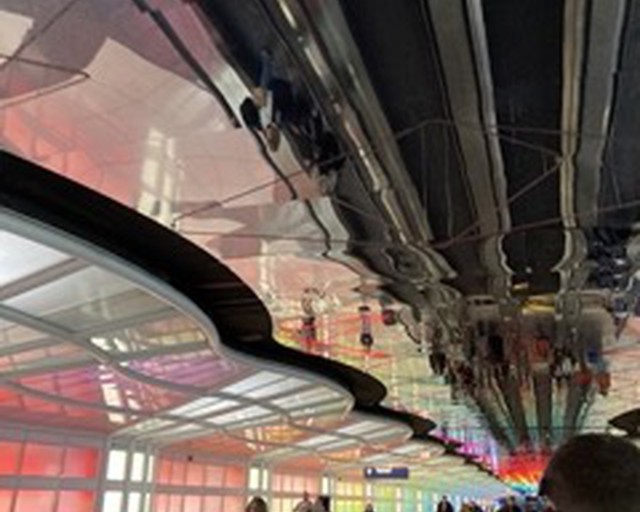 I flew a familiar route for Thanksgiving break. My husband's brother lives out in Portland, as do his wife and kids, so we go there often. The flight is pretty long for US standards - being born and raised around Chicago, I am used to (spoiled by?) short, easy flights to the East Coast, maybe 2 hours at most. Even so, the long flight is worth it to be with such important people. Also, Portland is an amazing city, and the experience with PDX is never much of a problem, if that.

I am attempting to build status on United, so we went with United for the outbound flight. It was predictably expensive because…Thanksgiving travel. Knowing that Thanksgiving plus airports always = shi!tshow, we booked Tuesday to Friday travel (Thanksgiving is always on a Thursday).  Travel on the Wednesday before Thanksgiving and Sunday after it are some of the busiest, if not the busiest, days in any American airport - translation: hell on wheels. I went to college within driving distance, but when I went to grad school on the East Coast, I flew back to school on the Sunday after Thanksgiving, and it was soul crushingly terrible. Don't do it!

I apologize in advance for very few pictures in this upload! I didn't commit as much as I should've to taking lots of pics, but I certainly will in future reviews, I promise! I am hoping that my ~*~*~*colorful words help offset such a dearth of visuals.

We began this trip at ORD, our local international airport (almost a bit of an oxymoron!). I have rose colored glasses for ORD, since it was our family's airport (closer to home than MDW) and one I associate with family vacations. I still think that it offers a fantastic array of restaurants, shops, seating, and other ways to spend time and money. Some bathrooms need updating, but some have received said updates and don't look like they're from 1996…for this, I am grateful.

One of my biggest tips at ORD is to eat at Tortas Frontera! Rick Bayless, a celebrity chef specializing in Mexican food, has put his stamp on these restaurants. My husband and I were going to order dinner to go, which is what most people do since there is little seating in any of the ORD outposts of Tortas Frontera. But then someone popped up to ask if anyone wanted to dine in, and we said yes, so we were taken to the bar. Tony took our order, made our drinks, put our food together, and was hilarious and so much fun to talk to. What a fun start to our trip! If you are at ORD, make sure to go to Tortas Frontera! :)

From there, we knew we had enough time to go from the B to the C concourse. Our awesome dinner experience was in the B concourse, whereas our gate was in C. We knew from previous flying experiences that the C concourse, unlike the rest of ORD, has very few sit-down options, and almost zero quality dining options in any way. We ate dinner in B and then went through the ICONIC multi-colored walkway to get to C. For the 90s kids (and those who love them), you might recognize this area from the music video for "I'll Be Missing You" - https://www.youtube.com/watch?v=NKMtZm2YuBE&ab_channel=BadBoyEntertainment 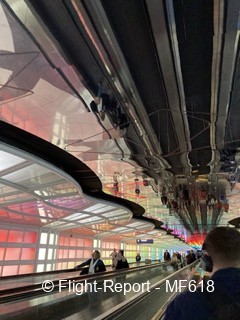 Now, after continuing to rack up the steps, we were at the end of Concourse C, at our gate. The boarding process had some "human clumping" but was relatively efficient, and we made it onto the sleek, updated-looking A320 in no time. I did not take a ton of pictures because it was pretty full by the time we got on, but I'll be more strategic in the future and take more! 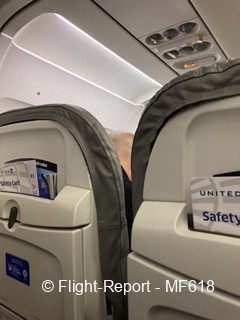 Something stood out to me immediately - the colors! I am used to United flights with dark blue or purple as the dominant color, but this cabin was all about…gray. A nice, inoffensive gray permeated the cabin; all of the seats were decked out in this color, which stood out to me as unusual. There were few pops of other colors. Even so, the decor and lighting looked sleek and fresh, so it felt quite modern overall. 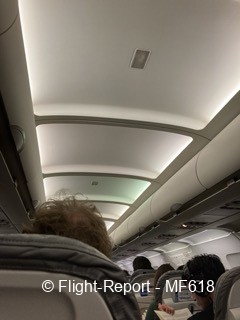 Here is my creeper shot of the cabin! It was pretty cramped, due to a full flight and the slimline seats adding to the sense of being packed in like sardines (feel free to disagree - I realize that the thicker seats probably cost airlines and thus customers more, and they look dated easily anyway).
Something odd happened. I already had little room, given the fact that I wanted to pull out my laptop, and that's always harder when someone reclines in front of you. But I thought the recline wouldn't be going on at the outset…it is not allowed, after all. I didn't have a ruler to check, but I am pretty sure the individual in front of me had his seat reclined the whole time, including during takeoff, and the flight attendants seemed to have missed his recline. Thus, my space was even more limited than it would be otherwise! This was quite annoying, and it lasted all 4.5 hours. I am not sure if the man in front of me was in his…uh…right mind? He might have been on something. He did indeed have his sunglasses on the whole time.
There was no IFE, and I looked ahead of time to see if there would be outlets in our kind-of-far-back section. Seeing that we would have no power or IFE, I made sure to charge and bring my portable Anker charger, which is always a lifesaver! We didn't eat onboard, since we chose to eat magical tortas earlier, but the free food consisted of pretzels or a cookie. I didn't eat either because I was full. United has a pretty good selection of drinks, so I got delicious seltzer and added some Wheatley vodka, which I actually didn't finish, because I am a lightweight.
Upon arriving in PDX, it was already quite late in PST and CST time zones, and we faced the unfortunate struggle of incompetent car rental professionals. The process took a very long time, and we didn't even get the class of car we wanted (I understand getting a midsize rental when you wanted economy, or a crossover SUV when you wanted a larger SUV…but we asked for a midsize sedan and got a crappy SUV). By the time we got to the hotel, we were grumpy but happy with the hotel itself, and the next day was a new one indeed :) 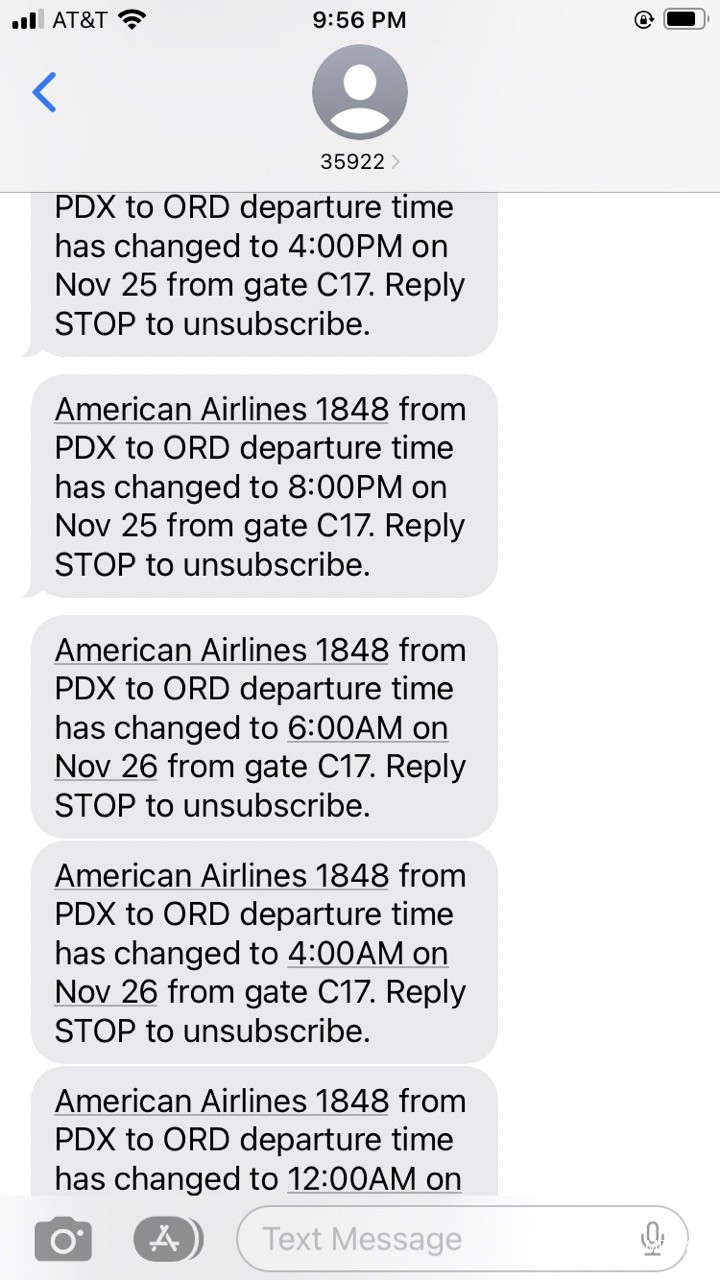 Our outbound flight was supposed to be on American, and it was going to be my first time in first class (we saw the $200 upgrade fee and thought "why not?"). Our flight wound up getting delayed from 11:50am to 12:45pm, then 4:00pm. This was already a bummer. Then it got worse… I received yet more automatic updates: 8:00pm, then 6:00am the next day, then 4:00am, then midnight (I think there was a midnight time announced between earlier updates too, but I was in a wee bit of a rage spiral by then). My husband avoided the super-long line of angry people, many with babies, and went to a different AA gate, getting us the last United flight that wasn't a weird red eye, instead leaving at 2:15pm and flying direct! We didn't get first class, since existing customers had those seats/were upgraded, but the UA gate agent got us into Economy Plus for no charge, which was very sweet. Later, our flight attendant heard about our delays with AA, and he gave each of us an alcoholic beverage on the house. There is no flight report for this leg, since we had been riding an emotional rollercoaster all day and just wanted to get a drink, plug in the headphone splitter, and watch Love Is Blind. Thanks for reading :) 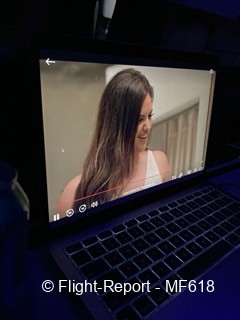 My UA flight to PDX was relatively incident free, save for a recline-obsessed likely stoner in front of me. The leg back to ORD was absolutely insane!