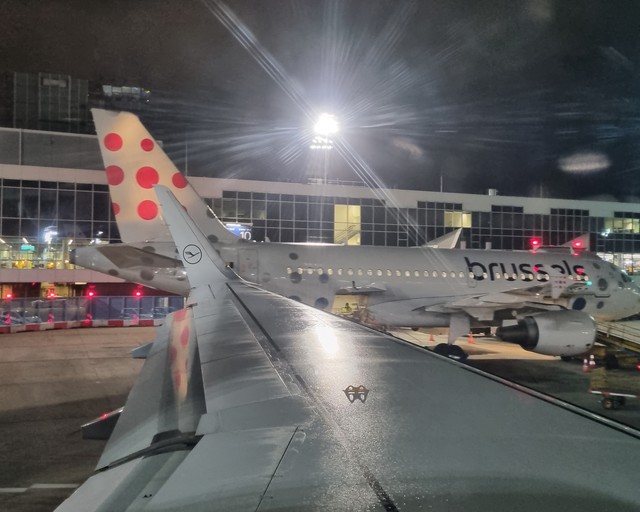 #53 out of 80 Airlines A minimum of 10 flight-reports within the past two years is required to appear in the rankings. 1458 reviews

After a great holiday in Thailand, it was the time for my last flight of today's itinerary and that would be a flight with Lufthansa to Amsterdam.

After arriving from my flight out of Bangkok, Passport control took about 15 minutes to clear and we were on our way to the schengen departure sector for our flight. Security did take 10 minutes or so, but it took longer mostly because the security belt decided to give an error prior to scanning my bags. After receiving my stuff, I went off to airside, which drops you off in this duty free section of the terminal. 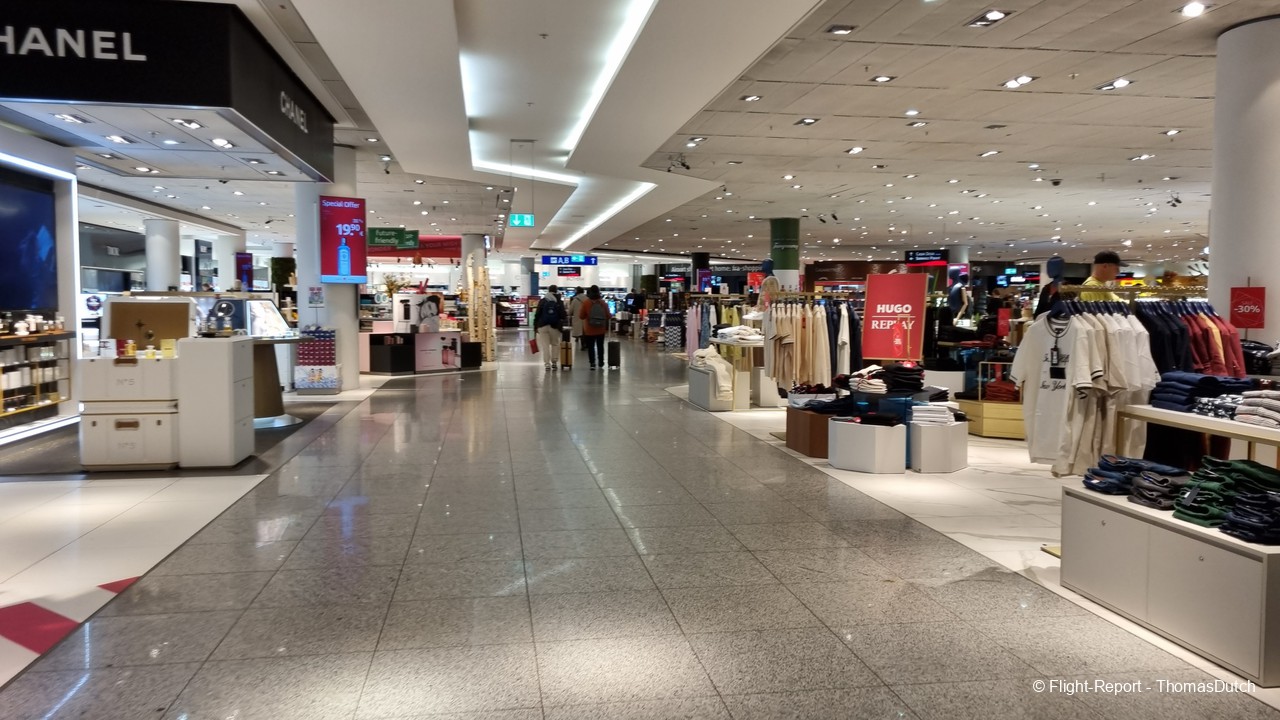 The main square of Frankfurt's terminal 1 which wasn't too busy this late at night, however I find Frankfurt a rather unpleasant airport with limited services / things to do for the size of the airport. 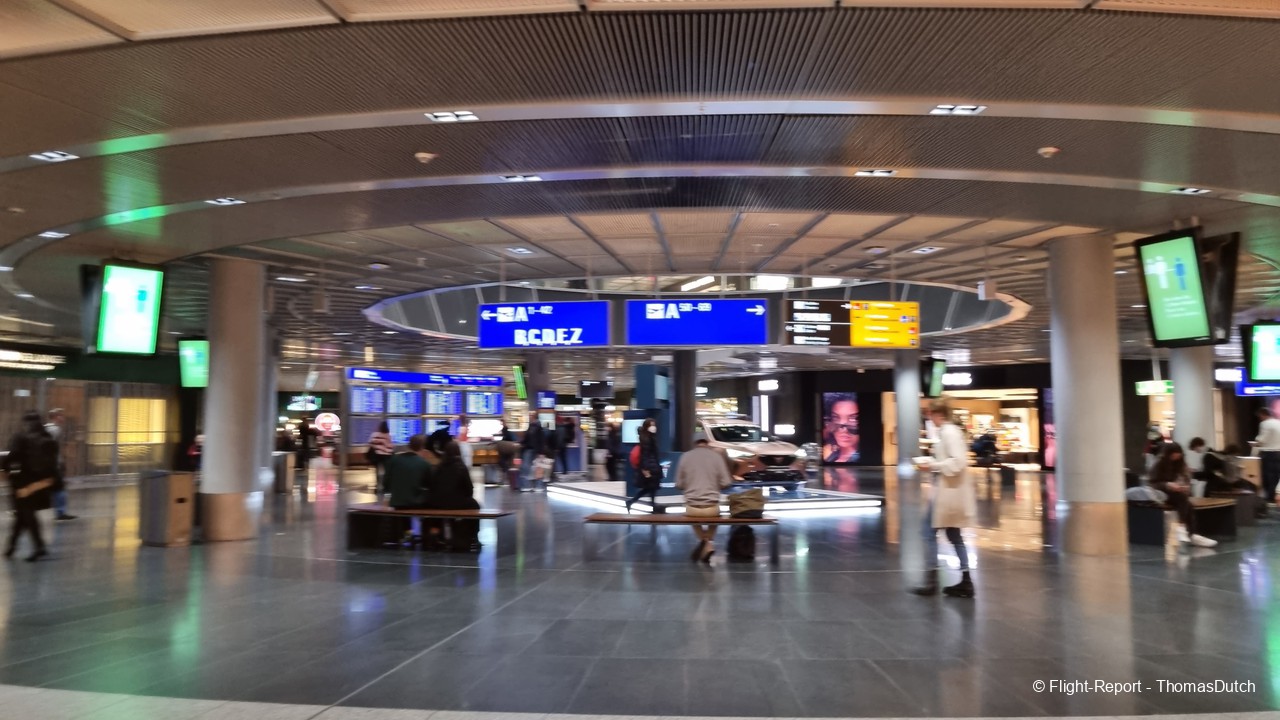 A1 would be the gate for today's departure and the flight would be performed by D-AIUN. D-AIUN is a 7.8 year old Airbus A320 which has been newly delivered to Lufthansa in April 2015. 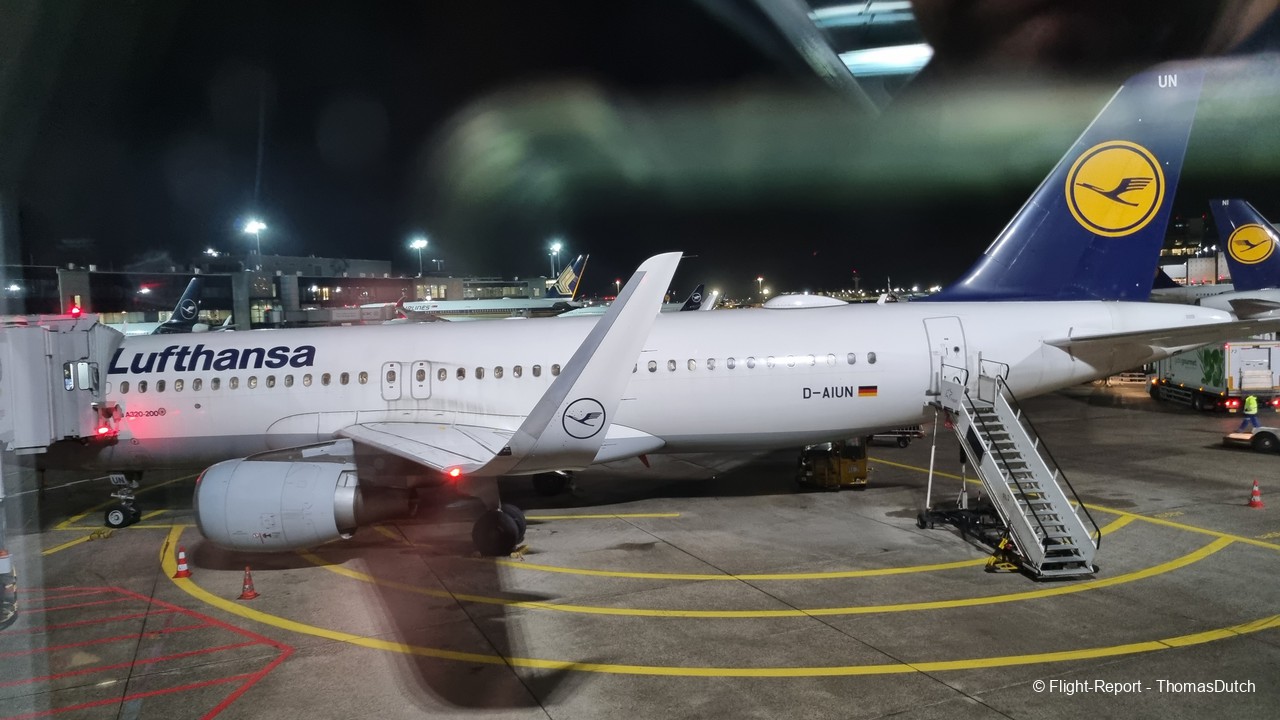 A1 was an absolute horrible gate with one person per time being allowed to the jetbridge, which went very slow. My wife was shocked about the flight attendants the moment she entered the cabin asking me why the flight attendants were so old and inattentive to their appearances. Now I tend to not judge flight attendant on their age, but the appearance was far from desired. They were friendly though, yet very distant from passengers too.

Unfortunately this A320 has Lufthansa's newest configuration, which means that the last hour will be siting on an iron board, though legroom was no issue. 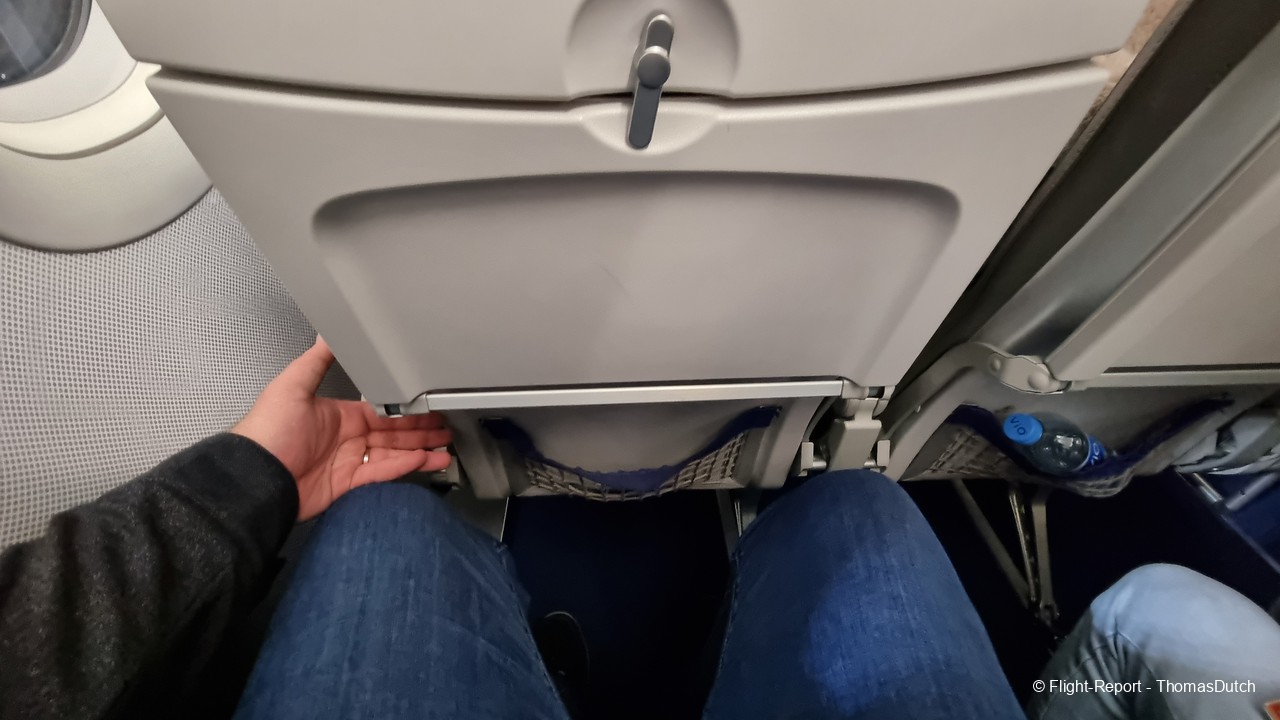 The iron boards of Lufthansa. 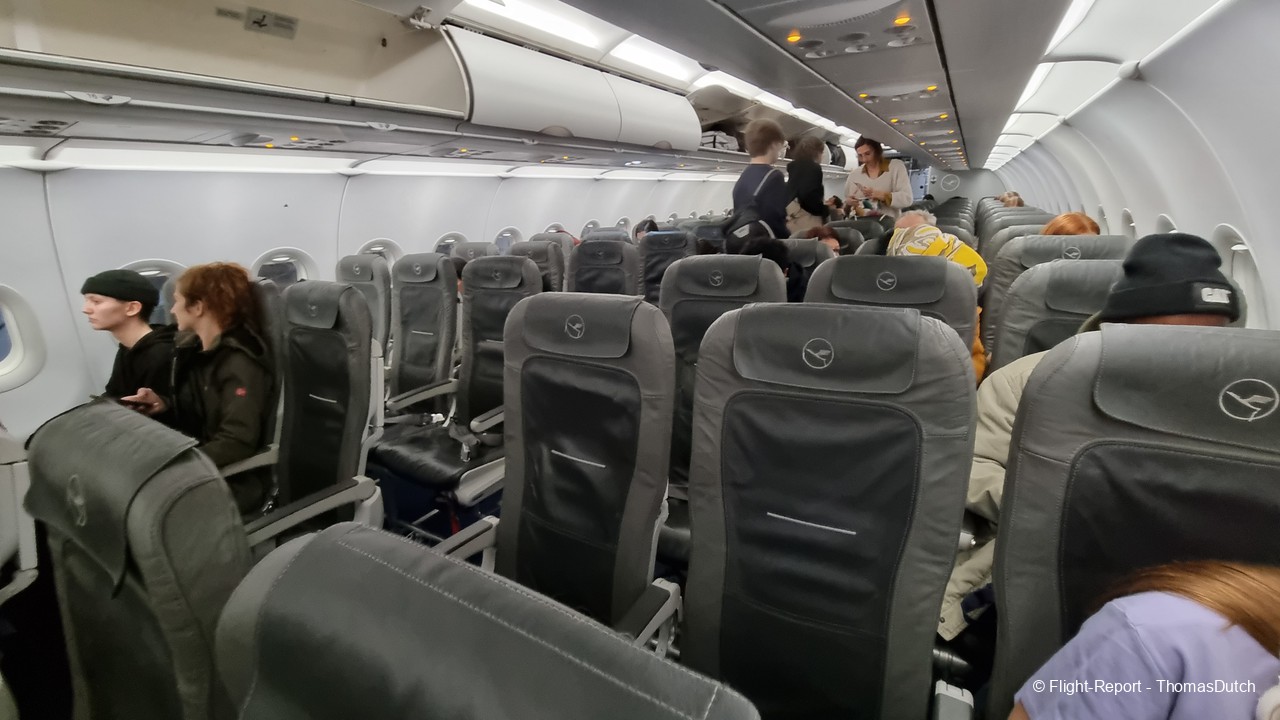 The window view of my seat. 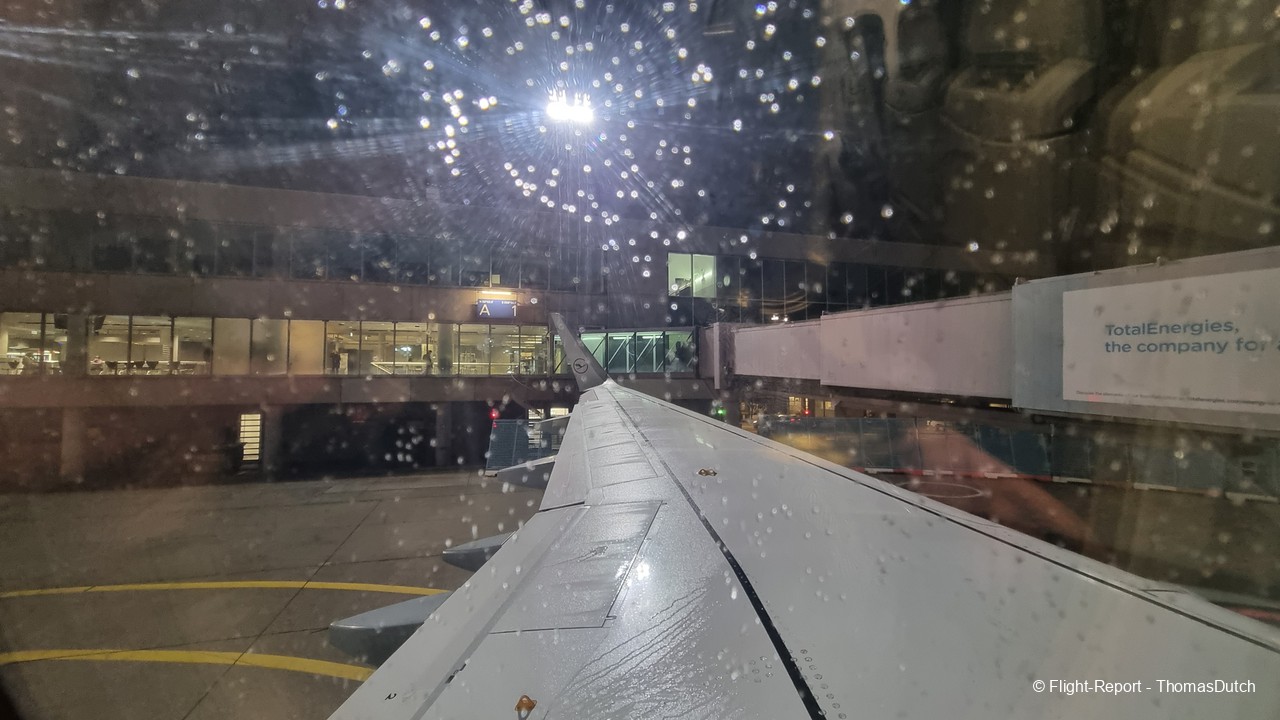 The aircraft is however equipped with individual air vents, which I kind of enjoy having when the cabin is on the warmer side than I'd like. 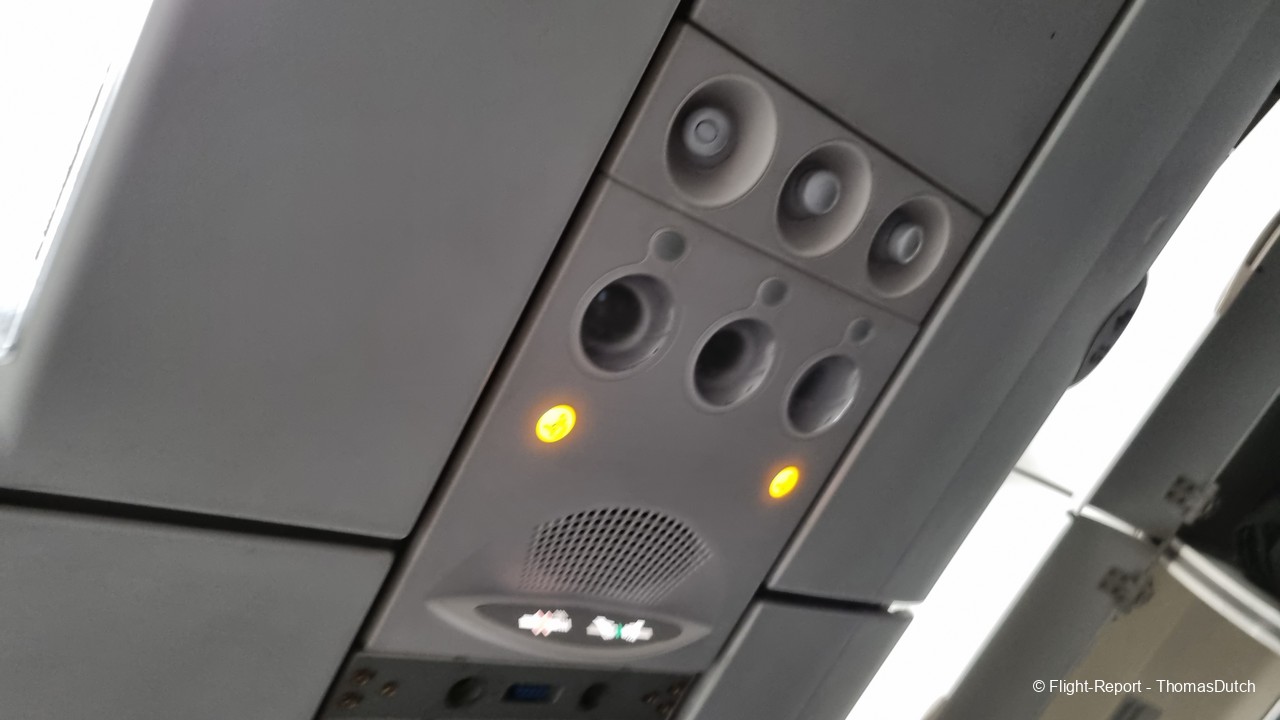 Engines were started right on time on our stand and it took no more than 3 to 5 minutes to be taxiing to our departing runway for tonight, which was going to be Runway 25C. The captain however seemed to be very chatty on the intercom and in a hurry with his taxiing.

The thing I noticed is happening with Lufthansa and only is done by Lufthansa is that the safety demonstration is a short message to pay attention to your safety card and an indication by flight attendants to your nearest emergency exits. I understand and many will say that they know what to do, but to visually show it to one, even the frequent travellers, is in my opinion of utmost importance…. 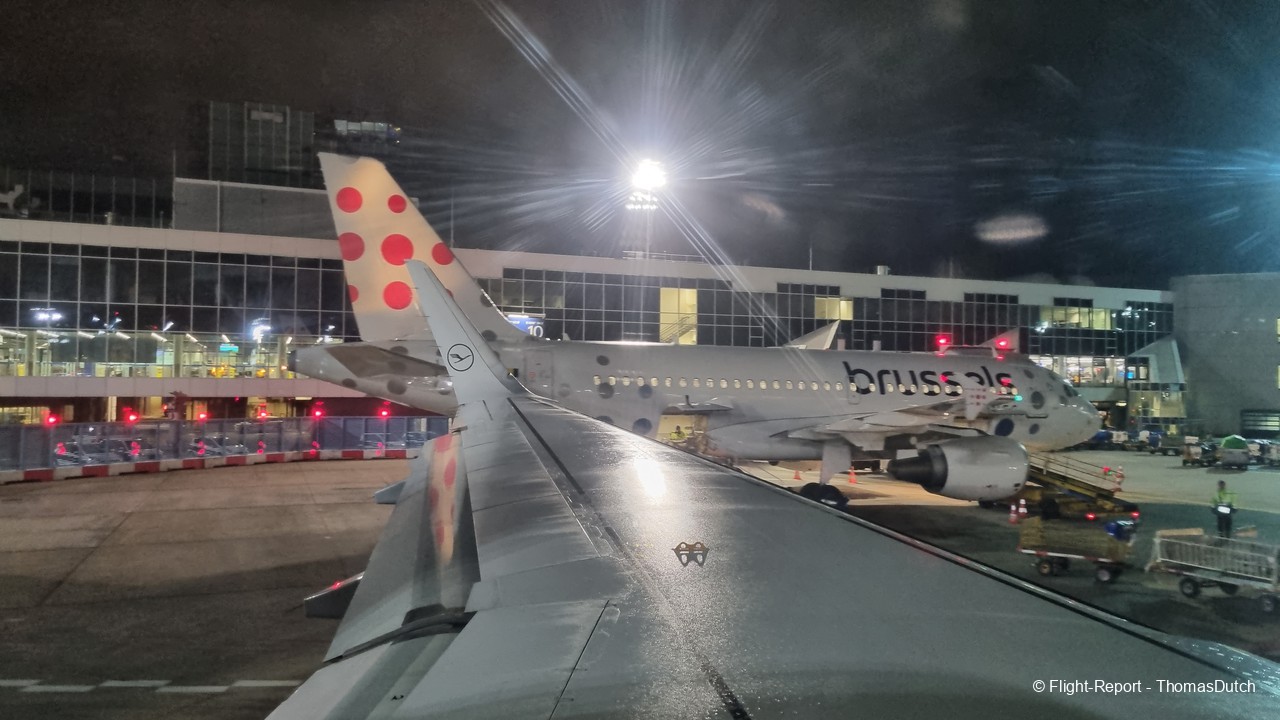 Departure was right on time and about 15 minutes into flight, we received a bottle of water and a chocolate with Lufthansa branding. Water is water and the chocolate was of cheap quality. 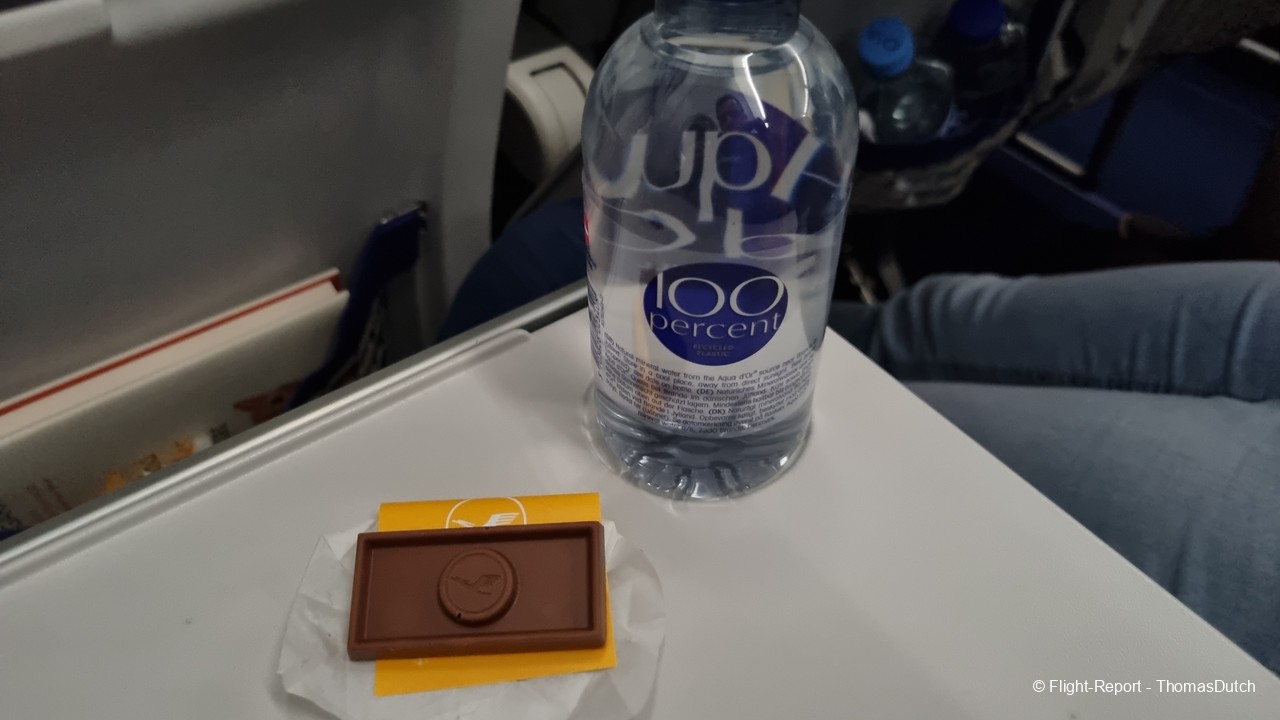 The literature of my seat contains a sickbag, safety card, BoB Menu and Lufthansa's magazine. The BoB service was not engaged due to the fact that the flight was too short. 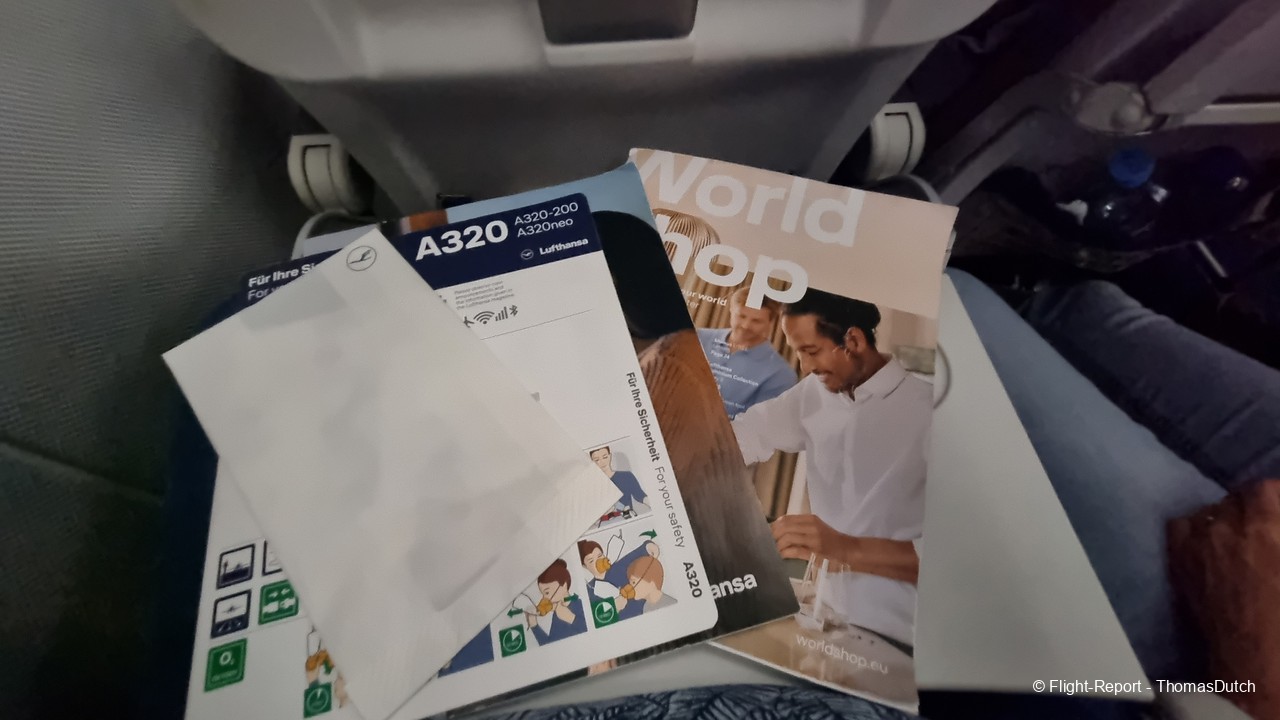 A view of the cabin with respect to J Class. 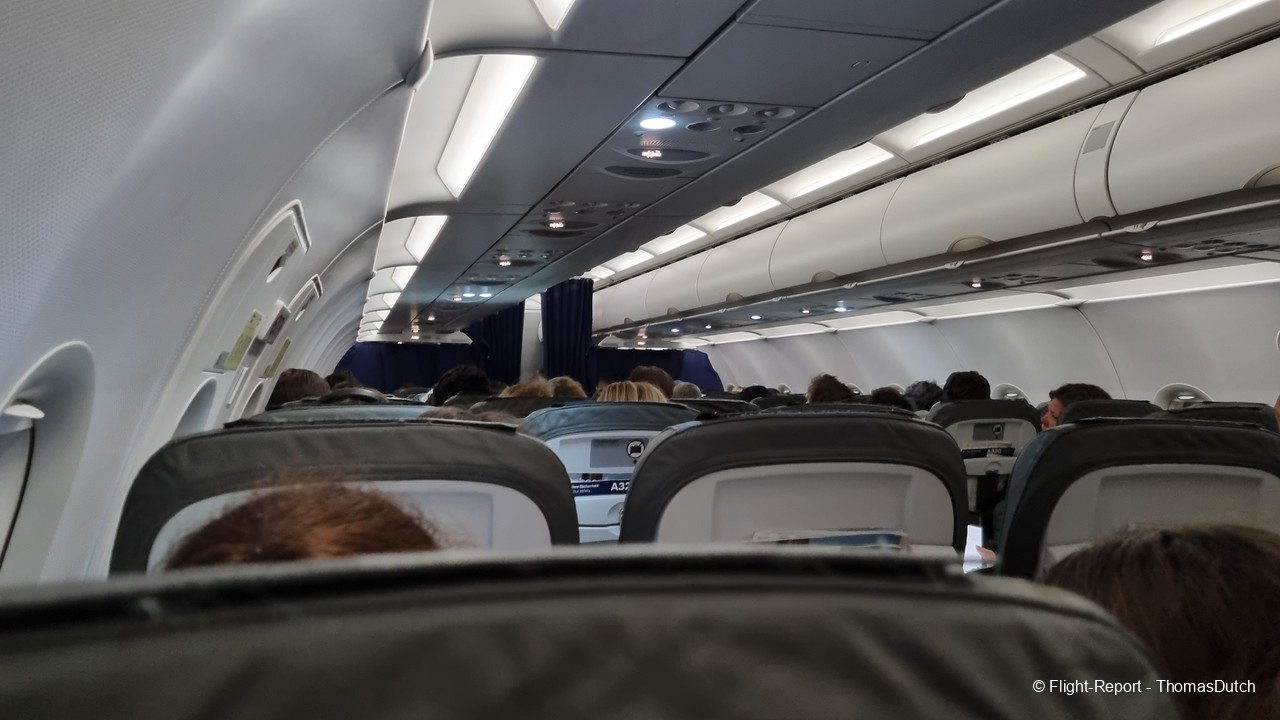 The flight actually took a bit longer than I expected and we touched down a few minutes past 10 PM on Runway 18R, which meant that we needed another 15 minutes to reach our gate. 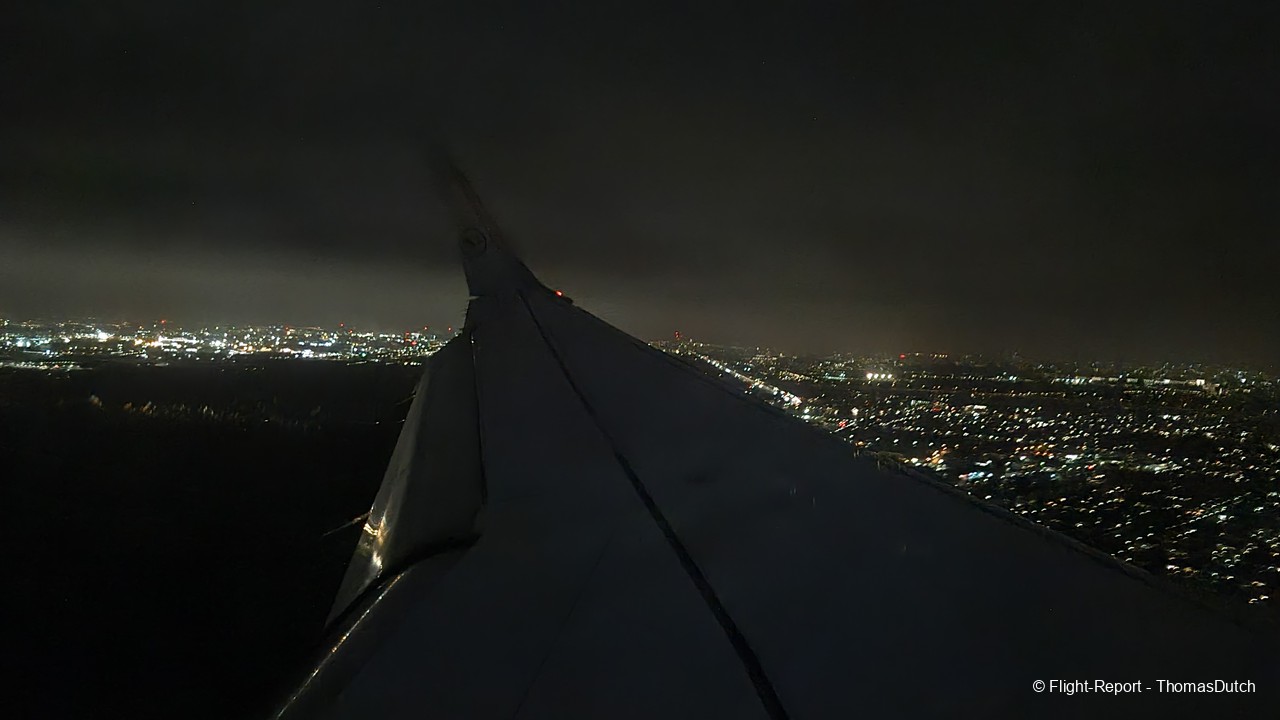 Remember that I said that the pilot seemed to be in a rush? He taxied quite fast to suddenly come to a stop at an intersection were every aircraft was turning. I felt like the pilot was suppose to turn there too, but simply missed the turn due to his high speed of taxiing….. and continued like two minutes later via Taxiway Q, the ride the long way around to our gate. We were parked next to a Vueling.com Airbus A320, though it took another minute for us to be standing in front of the gates with the captain making an announcement that the docking system was way too slow….. 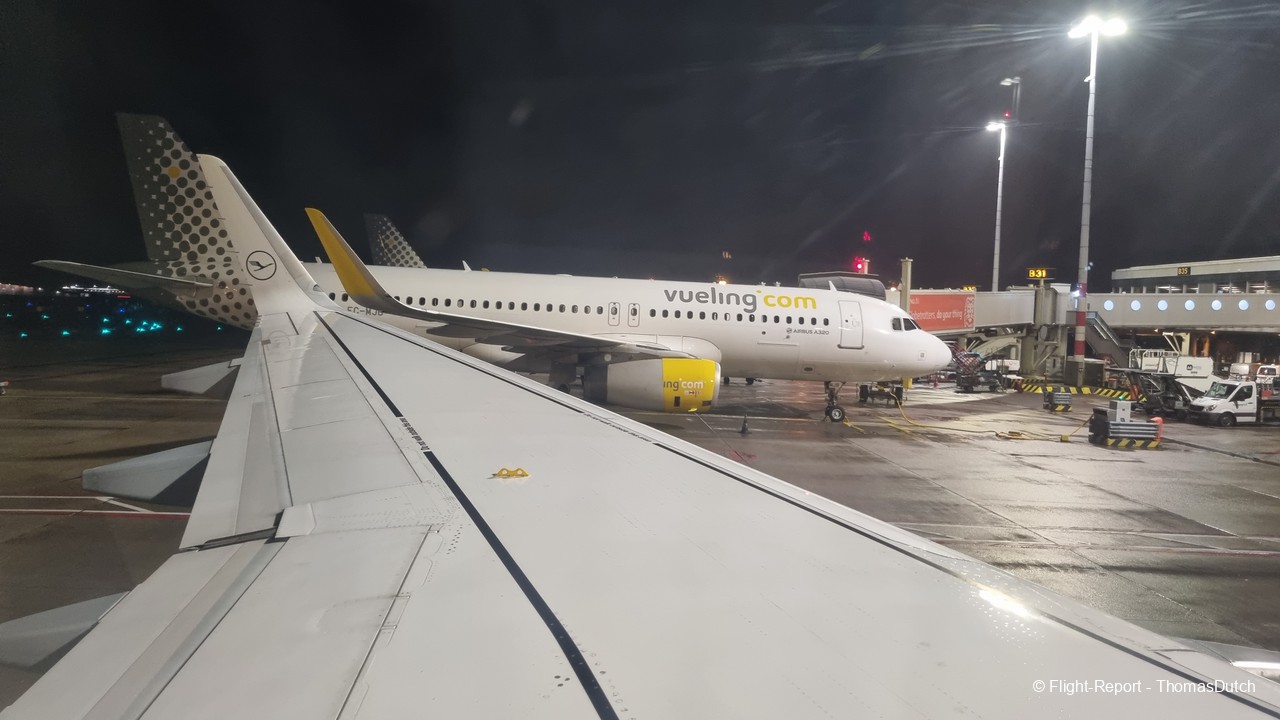 The last view of the Airbus A320 that brought us over. Baggage belt 2 was in use for our flight and was shared with another flight. It took about 15 minutes for us to grab our bags and be on the way to the busstop to our car at P3 Long Parking. The flight was rather unpleasant to me with a captain that seemed to be rushing for no apparent reason as we were right on. The flight attendants were friendly, yet very distant and were very inattentive to their appearance and the cabin is just absolutely awful with iron boards which is so uncomfortable.

The contributors of Flight-Report published 10 reviews of 2 airlines on the route Frankfurt (FRA) → Amsterdam (AMS).

The average flight time is 1 hours and 16 minutes.

He wrote 93 reviews about 37 airlines and 48 airports.