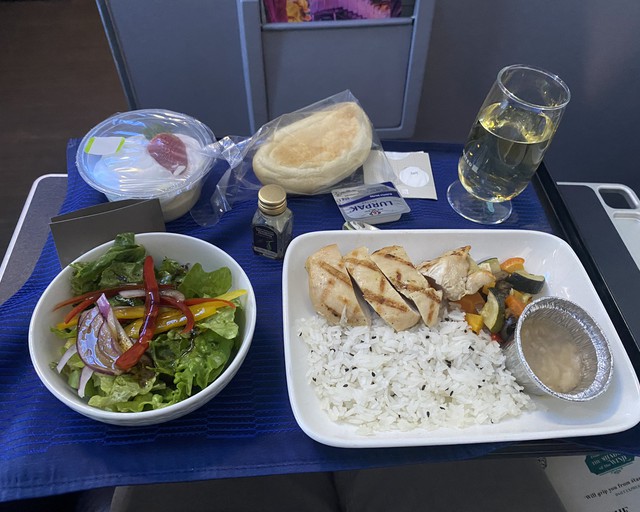 #60 out of 80 Airlines A minimum of 10 flight-reports within the past two years is required to appear in the rankings. 384 reviews

This is the return flight of a roundtrip I had booked for myself and my parents to Panama City over the holidays. This was our first time in this fascinating Central American country which I highly recommend for history buffs. They also use the U.S. dollar as their currency, making it convenient for American tourists. For this trip, the difference between economy and business was not that much, so I booked us into J class since it included checked bags and a meal. Other options out of New York included Copa from JFK and Delta from JFK (although that was discontinued. Delta cut the LAX-PTY route as well, so they only serve Atlanta out of Panama now).

Tocumen Airport is one of the busiest hubs in the Americas due to Panama's geographic location. Interestingly, the flag carrier of Panama, Copa Airlines, only flies narrow-body planes, which means flights to Europe are off limits. Still, Copa is able to reach as far south as Buenos Aires, which is very impressive range. The airport is a relatively short drive from downtown.

After we checked in at the United counter, we headed to the Copa Lounge as access was included with our fare. The lounge featured a great view of the terminal below and wasn't too crowded during the time we were there (8:45 - 9 AM). There was a decent selection of breakfast pastries, oatmeal and a sturdy-looking Nescafe Alegria coffee machine. I opted for a Cafe Negro (which we know as espresso). It was quite good. After a quick bite and coffee at the lounge, we headed over to the gate where we were subject to an additional security check before boarding. The flight appeared fairly full, but we were seated in no time as we were in the first row. Unfortunately, for the second time this trip our aircraft was downgraded from a 737-9 to a 737-8. I had been expecting a newer plane but you could definitely appreciate the wear and tear on this particular bird. The seat next to me was not particularly clean either. Note that since we were in the bulkhead we were required to store any larger items in the storage bins above our seats. 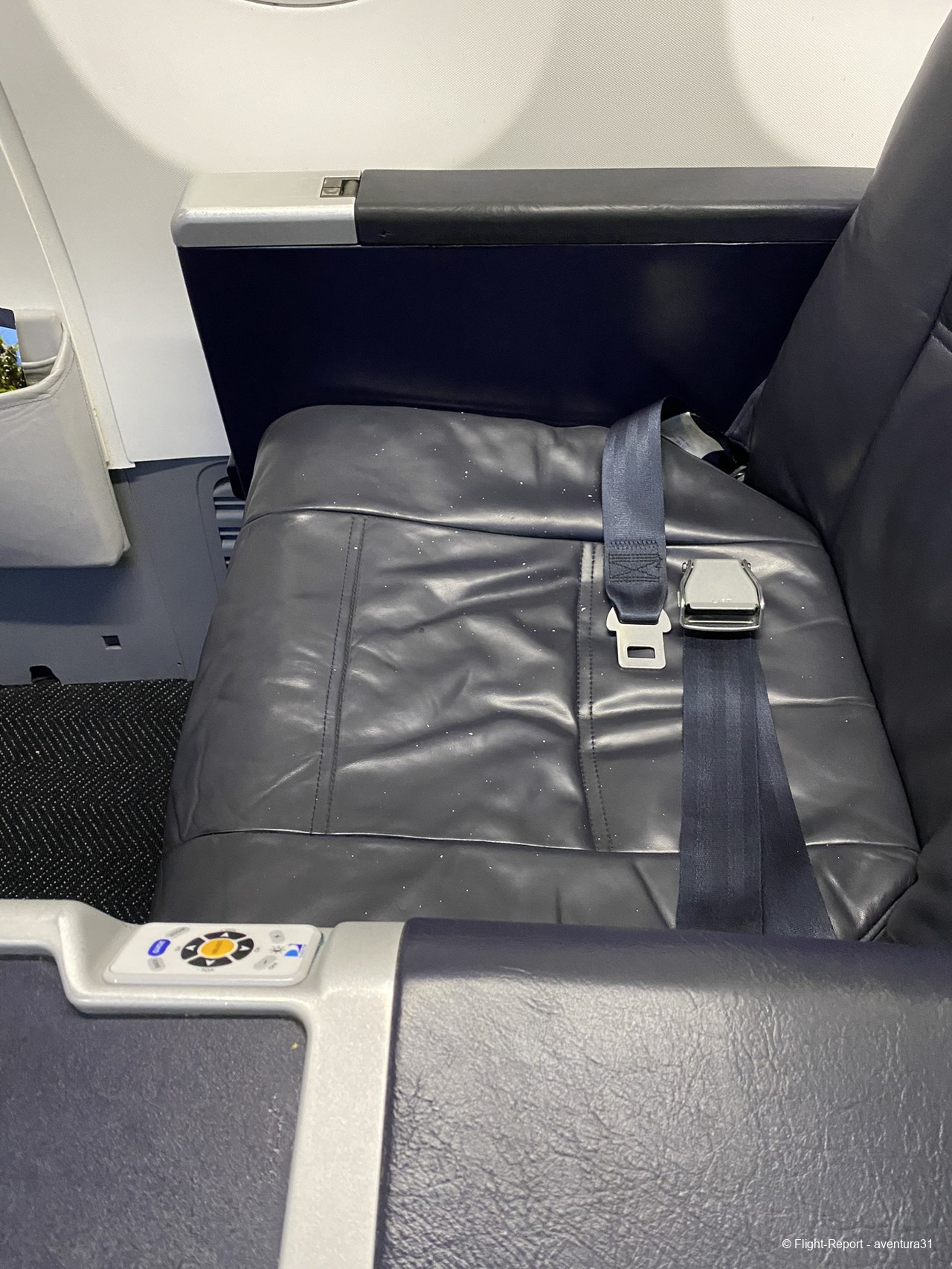 That said, leg room was quite good since we were in the bulkhead. There's an ancient TV monitor in front of us which I didn't use. Note also the credit card reader (I wonder what you could buy using the monitor). What I really enjoyed was the inflight magazine (Hemispheres), which is a rarity nowadays (American and Delta sadly discontinued their onboard publications). Storage was a bit limited, but the seat did feature a power outlet. 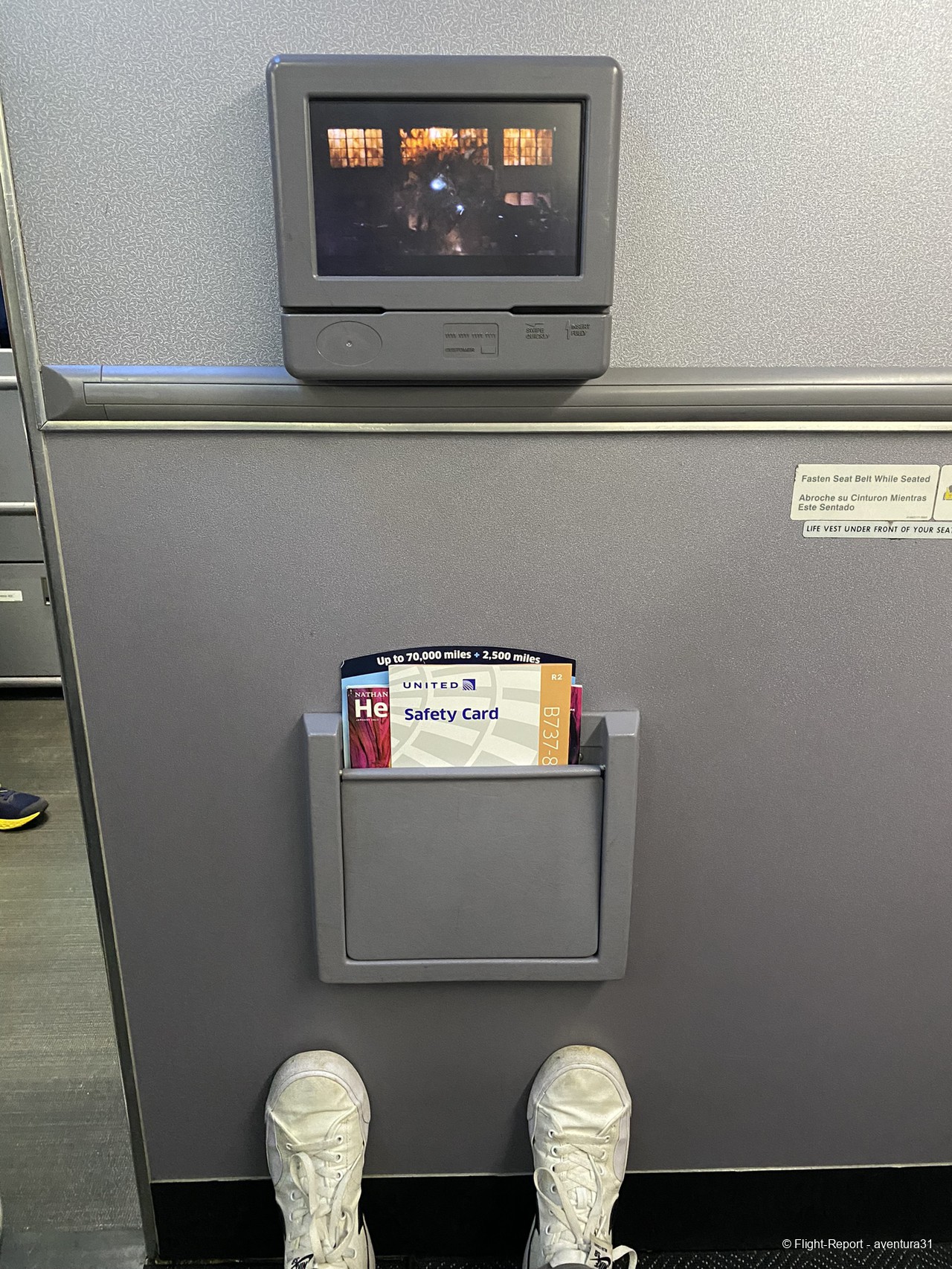 We received a small sanitary wipe to clean the seat. There's a very small tray where drinks could be placed. For the pre-departure drinks, they used blue plastic. 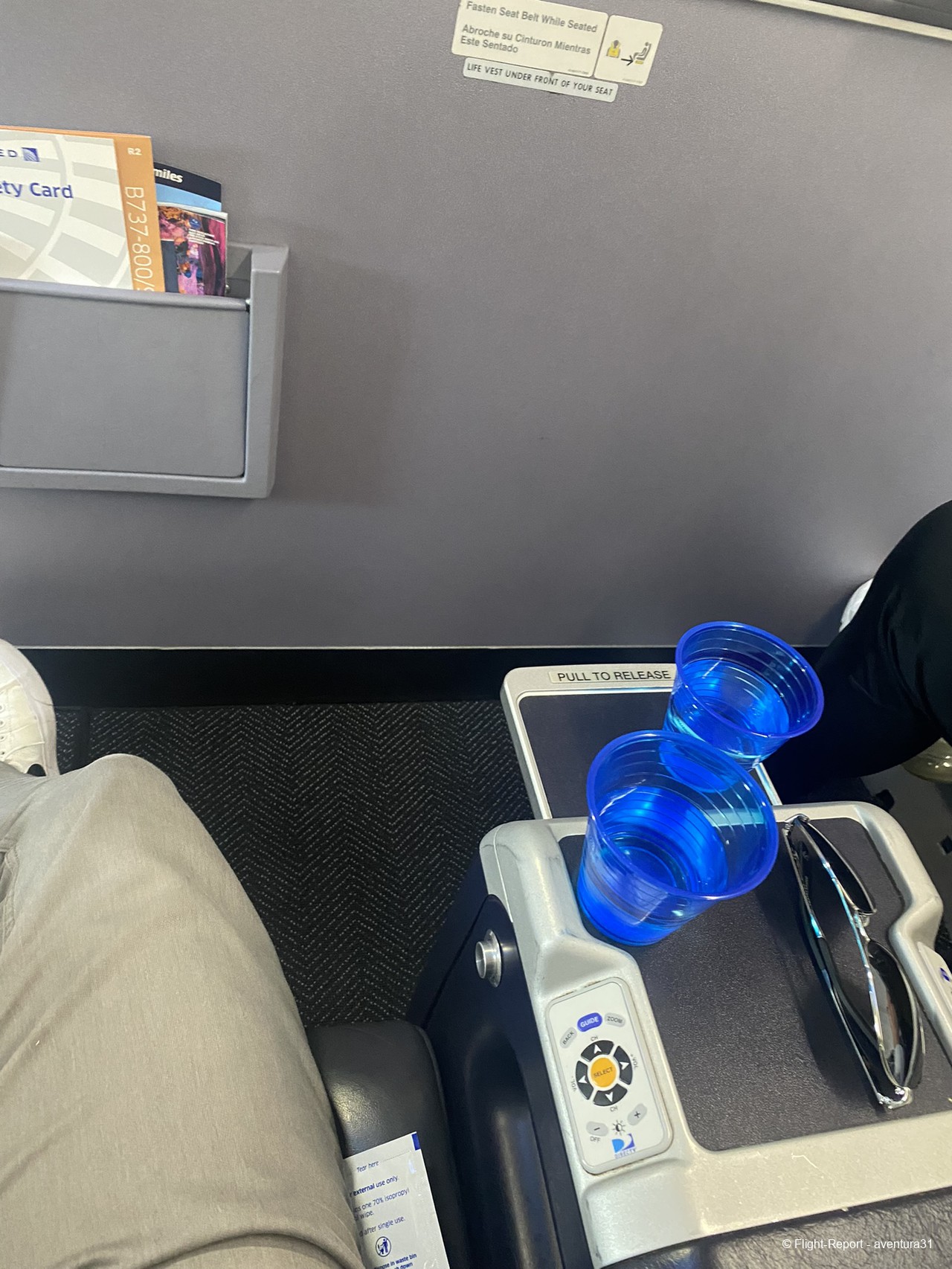 When time rolled around for lunch (which was served around 11 AM, a bit earlier than I would have preferred), everything was served on one tray. The salad was fresh and tasted great, accompanied with balsamic and olive oil. I chose the chicken option, which was served with white rice, roasted vegetables and a sauce which I couldn't identify (but was decent). The dish was a bit bland. The white wine was a nice accompaniment. Unfortunately the bread was cold (I recall it was served warm on the outbound from Newark. Dessert was a tres leches style pudding with a strawberry (this was quite tasty). Overall, a decent meal but I did prefer the outbound meal (which included bulgur salad, cauliflower rice with veggies and a warm chocolate chip muffin). 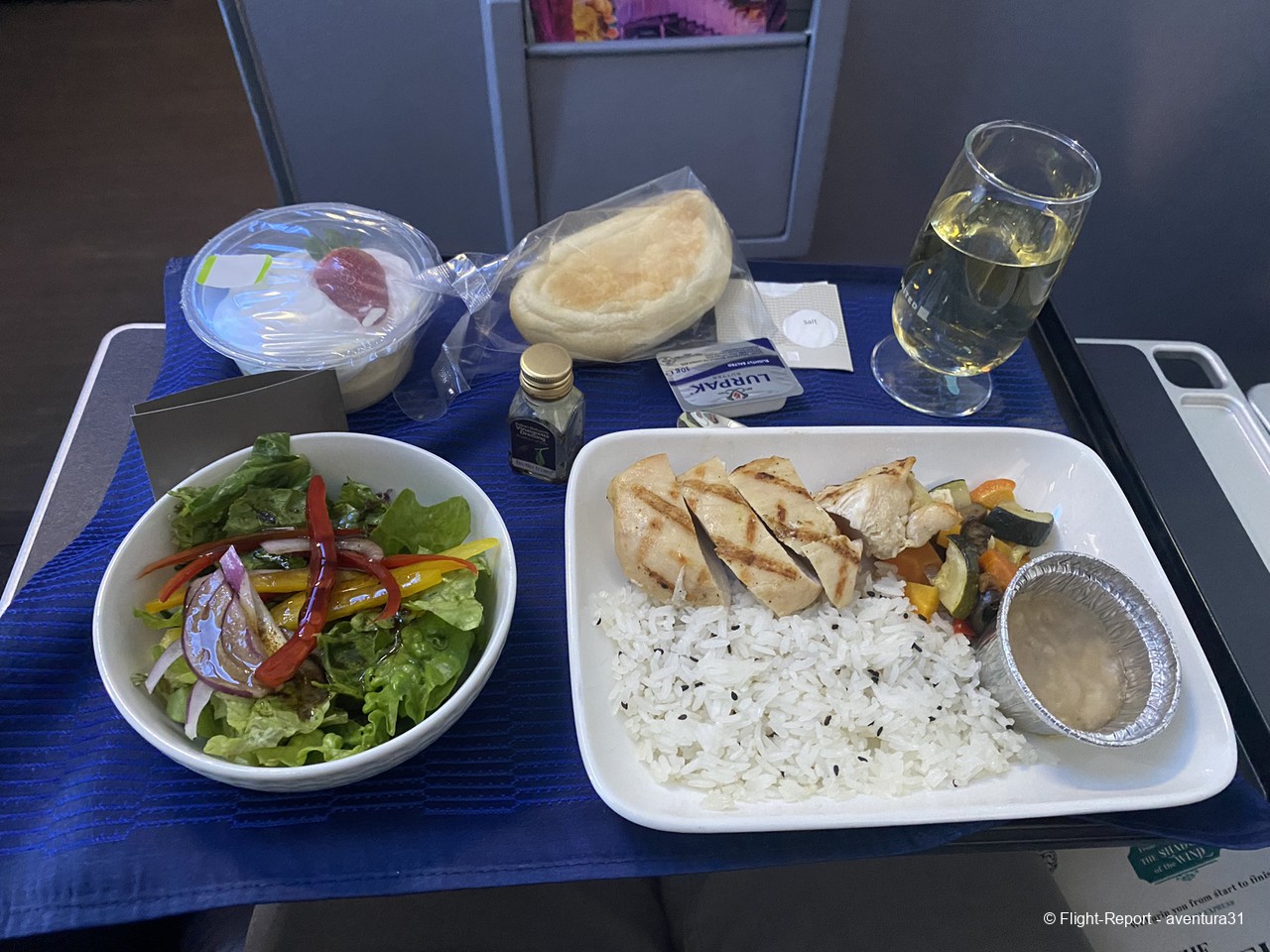 I made a few trips to the lavatory which was located at the front of the cabin. It was relatively narrow, but the sink is still wider than American's laughably small economy lav sinks. The crew was friendly throughout the flight, and they had one flight attendant who updated passengers in Spanish. 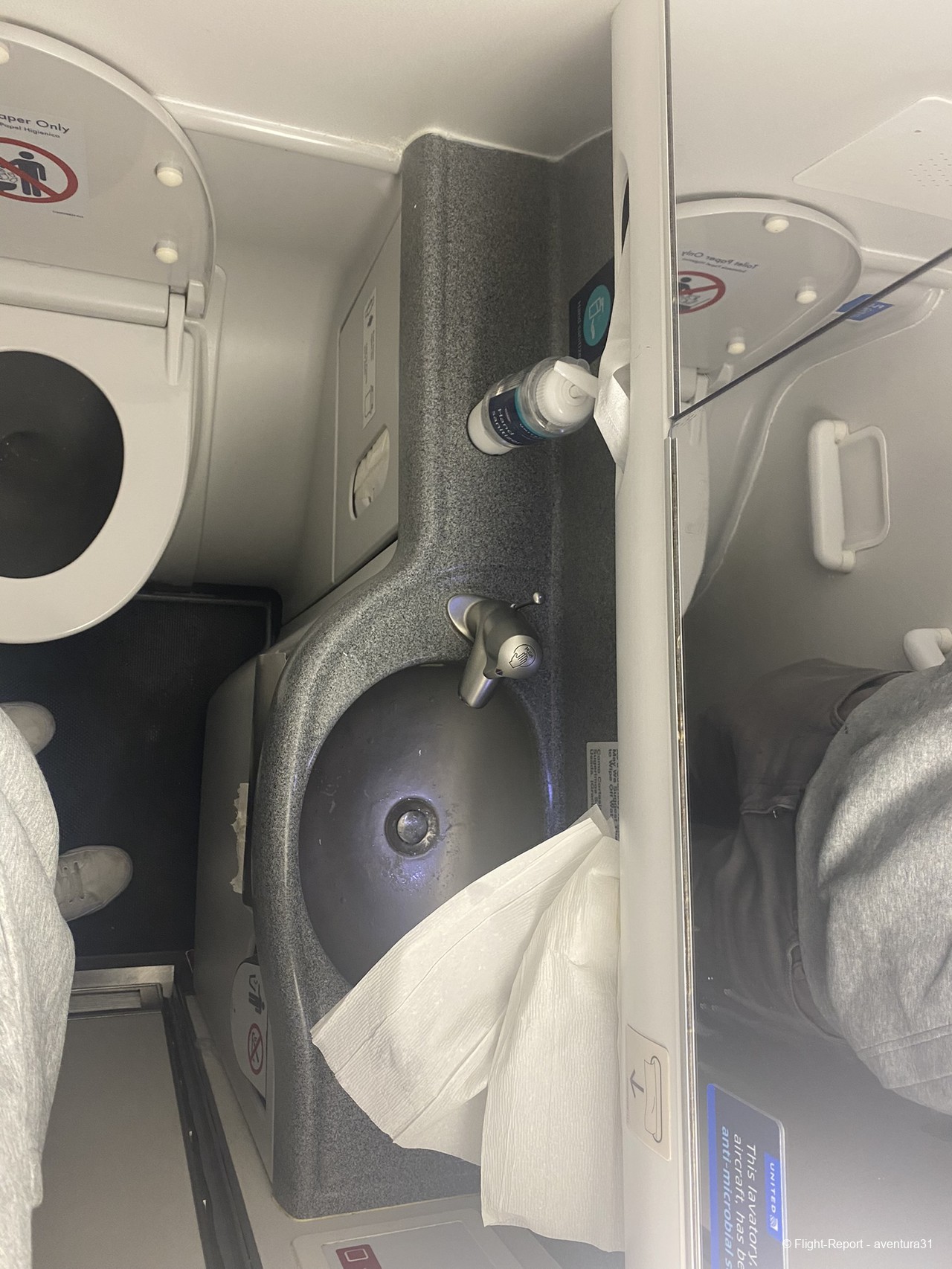 After lunch, I dozed and read Carlos Ruiz Zafon's 2nd novel in the Cemetery of Forgotten Books series, which is one of the best collections I've read in recent memory. We landed at a rainy Newark and thanks to Global Entry, quickly passed through immigration, collected my bag, and ordered an Uber back home to Manhattan.

This was a pleasant flight on United, an airline I normally don't fly since I'm Advantage Gold member with American. In the future, I would credit flights on UA to Avianca Lifemiles, which are more valuable. The crew was attentive, the food was very good, and the seat was adequately spacious for a flight of this length (5+ hours) despite the cabin being dated. Kudos to United!

aventura31 is member of Flight-Report since May 2017.