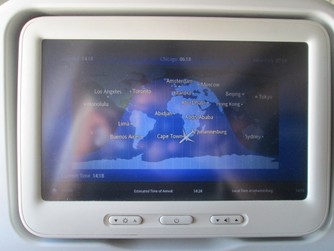 #16 out of 77 Airlines A minimum of 10 flight-reports within the past two years is required to appear in the rankings. 698 reviews

By Yonatan Paz 3980
Published on 19th April 2015
Hi and hello back, I hope that you'd a great easter/passover and welcome to my flight report!

Background:
Me and my family planned to fly to South Africa to meet friedns and celebrate a b.day for one of them. We decided to went nearly christmas, because there is a vacation from school. We used our United Miles and payed 37.5K for each direction. We hadn't so many choices to fly from Tel Aviv to Cape Town on Star Alliance, our choices were Ethiopian Airlines (TLV-ADD B738, ADD-JNB B77L, JNB-CPT SA A319) or Turkish Airlines (TLV-IST TK A332, IST-JNB-CPT TK A333). We decided to book TK flights, as we can stay at the CIP lounge, TK service is better than ET and TK flight is a red-eye flight as not as ET flight.
Turkish will start non-stop Cape Town service from November, I think that flights will be operate on A330-200. It will cut the flight length from 13h10m to 11h.

After Landing in Johannesburg, Before departure to Cape Town:
We landed in Johannesburg 30 minutes after the scheduled time. Cape Town passengers needed to stay in the plane when Johannesburg passengers left the plane. The plane was cleanded and the crew replaced by the crew of yesterday IST-JNB-CPT-JNB flight.
We weren't allowed to leave the plane like on AF flight from Singapore to Jakarta, so we needed to burn more one hour without Air Condition.
More one point to mark, the cabin crew didn't do a counting of the passengers, In fact, A JNB passenger could continue to CPT without paying of JNB-CPT sector.
While we were waiting in the plane, I did some spotting:
British Airways (Comair Limited) Boeing 737-400. My friedns family are the owners of this airline, one of the value airlines in South Africa: A close view of the Air Seychelles A332: More suprise to me, new airline that I've never see before, Cathay Pacific Boeing 777-300ER from HKG and departed after us. I excepted to see a 747-400: I didn't took photos of the take off, It was a rainny day.
After Take off, a lot of clouds were appearing durning the climb to FL340: The snack for this short flight: I orderd a diet coke and got a sandwich with cheese and vegetables. It was bit wet but tasty. In my opnion, It was enough for 2 hours flight. Cursing near Kimberley, half of the flight were passed: I decided to watch some movie: What an amazing wild, Just flew from the cold and rainny Johannesburg to the sunny Cape Town (And it was durning the middle of the summer, think about it!) :) 
Spotting in Cape Town:
Finally we arrived, after journey of 17 hours and only 4 hours of sleeping, I was happy and blessed that I finally arrived to this beauty and interesting country and the fact that will can sleep okay and take some refreshing shower!
I took some photos durning taxi to the gate, enjoy it!
SA (Airlink) CRJ 200:

Air Namibia Airbus A319 from Windhoek, Namibia hears a interesting country for me, I would like to visit there. The giant and the impressive South African Airways, ZS-SNC, A340-600, the only A346 that painted in Star Aliiance livery and still in service: After leaving the plane that I'"/> Bye bye TK A333 from the luggage claim area:

CPT model Airport, Like it, they need to add TK and ET planes!!! View of the Terminal: Thank You for reading!
Please left a comment!
"/>
See more

TK is a great airline with a cheap prices. TK is better than airlines that I've flown like UA,LX,LH,OS,AR,AC,TG,LY and more. Great meals, great IFE and cabin crew but seat pitch can be tight. My flight from Tel Aviv to Istanbul arrived latley and the plane to Cape Town wait so Turkish has a lot of delays (This is not my first time that I fly with Turkish)!!!
But I'll continue to fly with Turkish Airlines.
Destantions that I flew with Turkish:
Johannesburg (2 times)
Cape Town (2 times)
Shanghai
Singapore
Istanbul
Kathmandu
New Delhi

The contributors of Flight-Report published 21 reviews of 10 airlines on the route Johannesburg (JNB) → Cape Town (CPT).

The average flight time is 2 hours and 11 minutes.

Yonatan Paz is member of Flight-Report since September 2013.

He wrote 56 reviews about 24 airlines and 37 airports.