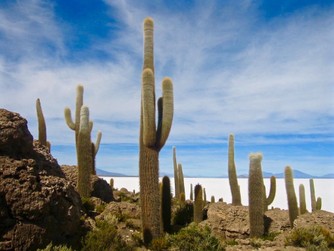 By flywunala 2782
Published on 18th May 2015
This trip is the support for publishing several photos from a 2007 trip to South America, which I hope are of interest to the FR readers. Unfortuntately I did not have my flight reporter hat at the time thus there is no cabin or catering shots..

My South America tour comprises of 8 sectors. The SYD to SCL flight stops over in AKL

This flight report focuses on the Sucre - La Paz flight operated by Aerosur, which has sadly ceaed operations in 2012. Some of the readers might recall some funky special livery of Aerosur 747-300 and 747-400, which the airline briefly operated between Santa Cruz De La Sierra and Madrid. Further information regarding Aerosur can be found here http://en.wikipedia.org/wiki/AeroSur
Ironically that flight was not part of the intial itinerary and was caught at the last minute to save time on the itinerary.

Sucre is a magnificent provincial town squeezed between the Bolivian Altiplano and the Tropical plain of East Bolivia. It is actually the administrative capital of Bolivia. Despite its elevation of more than 2000 m above sea level, the climat is mild.


Sucre airport is not far from town, but it is a long and winding road that leads to it. It is nested on a plateau which dominates the city. It seems like a miracle that developers found an area flat enough to build a runway…Well actually the runway looks anything but flat.
Taxis in Sucre come from another age and seem completely anachronic with steering wheel on the left side whether the car seems to be better suited for right handside driving…go figure!


The airport is very small and only basic services are provided. This is the view of the ramp. I can see my suitcases !


Our flight is operated by a 727-200 registrered CP-2462 which used to belong to Mexicana. Funny how tray table and some of the catering element were embedded with the mexicana logo. Boarding was very smooth with a great walk on the tarmac. See the rear boarding stairs…quite a unique feature of the 727-200


As often with small airport there is no taxiway. The runway is used as a taxiway and we turn around to line up. The terminal can be seen on the right handside just under the control tower.


The mighty Andes and high Bolivian Peaks. It is only a short trip to La Paz, about 45 min.


La Paz Airport is situated in El Alto, at about 4000 m above sea level, which is challenging for aircraft operation. El Alto is situated on a plain which sits on top of the Canyon where La Paz is nested. It is quite an extraordinary and dramatic layout. View of the Huayina Potosi culminating at 6000m.


Flying over the airport before turning back and landing. View of Mt Illimani


Just before turning toward the apron, a great view of Mt Illimani (6400 m) which dominates the city of La Paz. And if you look closer there is 2 very old planes that look like DC3…


Downtown La Paz, looking toward the South and the southern end of the Canyon. Amazing city, a must see.

Airshow on the AKL.SCL flight as we near the Chilean Coast


About to land in Calama. flying over the rugged and bare Atacama Desert. One of the most amazing airport location, which I would compare with Uluru (Ayers Rock)


Cuzco, Peru. Capital of the Inca Empire. Runway can be seen


TACA Peru A320 at Cuzco Airport


Runway seen from our LAN A320 bound for Lima. Our initial flight had been so delayed due to fog in Lima that it was cancelled and we were rebooked onto the next flight.


Flying over Cuzco Airport on our way to Lima


Just about to land in Lima, we are actually very low and close to land, visibily is extremely low to say the least…

A very exotic trip to say the least. Everything went very well from a flight point of view, except the delay in Cuzco due to fog in Lima. But the delay was handled pretty well and most passengers were re-booked onto the next flight. Aerosur offered very basic service, and I can't really remember what the catering was like. Such a short flight anyway. Other flights were really good, LAN and LAN Peru are very reliable and offer a very decent service.

He wrote 18 reviews about 10 airlines and 15 airports.