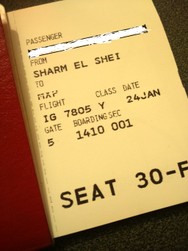 I am studying in Egypt, we have at least two weeks of winter break at the end of January. So I took this chance to spend my holiday in Europe. Ticket was bought on July 2015 to Milan Malpensa from Sharm El Sheikh that is located at the Sinai Peninsular (7 hours from Cairo). This resort city is famous for its beautiful beaches and casinos. Most of the tourists were from Russia and Europe. This airport ranked at third busiest airport in Egypt after Cairo and Hurghada. They served many chartered and seasonal flights to London, Moscow, Kiev, Brussels, Amsterdam, Birmingham, Jeddah and other European cities.

Sharm el Sheikh Airport once had been a controversial airport after an incident of Russian flight bound for St Petersburg was bombed.
Due to that, I could see the airport was deserted and not too busy. Most of UK and Russian flights were suspended till this time.

The airport has a unique yacht design As most of the users commonly European, and I was the only asian-look at that time, I was asked to check my ticket many times and refer to the information counter to make sure my ticket is correct before I can enter the departure hall. I am absolutely hated this and it is seriously not professional. What did they asked me was "Why didn't you take your flight from Cairo?". I should answer "Mind your own business" or "Would you buy me a new ticket? More expensive ticket?" … Yes, the reason I'm flying from here is just the airfare was super cheap rather than take a flight from Cairo.

All the passengers were allowed to enter the security clearance and departure hall one hour before boarding time commenced. When I asked the guy at the counter, he told me I was the only non-European passenger. Also, he suprised to know that as a Malaysian passport holder, I do not need a visa to enter the Europe (schengen countries). Yes, hat off to my past prime minister Tun Dr Mahathir. He is very well-known in Egypt. He had widen diplomatic relationship with many countries and as a result, we could enter 165 countries with free or visa on arrival.


After filling the departure form, I went trough the immigration and security clearance. This is the view of the waiting hall. I took my lunch at Burger King and from there I could see the arrival hall.


Sharm el Sheikh was hot and suitable for sun bathing. What a shiny and beautiful weather. The waiting hall was not too busy as there would be only my flight to Milan via Rome and another one airline, Neos for Verona also in Italy. My plane soon arrived from I don't know where. Boarding call was made and we were brought to our aircraft by bus. The flight load was full, together with me the 'rare' passenger.
Flight took off on time, excellent. I just knew that the flight will transit at Rome after the FA made welcome announcement. Light snacks were served one hour after took off. Sweet and savoury snacks. 'No pork' was stated outside the box. As I know, most of flights departing from Egypt are halal and no pork. So I have no hesitate to eat all of them.


We arrived at Rome after that and transit there for almost one hour. I was puzzled either I have to disembark or not as the FA only made announcement in Italian and passengers next to me cannot speak English. What else I can do, I mentioned him 'Milano' so he told me something in Italian and point to my seat which I make myself understand that 'I have to stay here'.

Flight from Rome to Milan took approximately less than one hour. We were given light refreshment.
Arrival process in Milan Malpensa Airport was a breeze. The immigration officer also nice and friendly, so different compared to the one in Sharm el Sheikh, why so serious?. Hahaha…

That's all from me.
I have another three flights on my way return to Egypt with Aegean Airlines.
Munich - Thessaloniki - Athens - Cairo. I had experienced the worst time ever in one of these airports. You should read them later.

Dear Sharm el Sheikh Airport Management. Please be nice to all passengers. Even they are not European-looking passenger. Please upgrade all of your facilities and your working attitude, be professional. Sharm el Sheikh is one of Egypt's famous gateway and your low attitude and not-so-professional working style really embarrassing. I am frustrated with Cairo Airport and I felt the same with this airport. Maybe later I can try to use Hurghada Airport and make some reviews.

Meridiana was okay for me. I have a good experiences in Malpensa Airport.