#3 out of 78 Airlines A minimum of 10 flight-reports within the past two years is required to appear in the rankings. 592 reviews

Welcome back to the second part of my trip report to Manama, Bahrain over the Easter Weekend for the 2017 Formula 1 Gulf Air Bahrain Grand Prix.

The connection time in DXB between the flight from MUC and the outbound flight to Manama was about 2.5h.
After arriving about 30min later than scheduled from MUC with EK52, my friend and I were a little bit in a hurry.
You never know how long you have to wait at the security control, because there are always a lot of transit passengers at DXB.

Overall everything went quite good. We had to wait about 15min for the security check and then had to take the train to DXB concourse B, where our Gate for EK837 was.

We arrived about 1h before the scheduled departure time at the gate.
Just a few minutes after we passed the gate and seated in the waiting area, we got the information, that the flight to BAH will have at least a 2h delay … well what a nice information.
The EK personnel at the gate gave everyone a voucher for some food and drinks.

We killed the time and walked around concourse B to check the other gates and then relaxed a little bit.

About 1h before the new scheduled departure time of 10:30 am local time, we went back to the gate.
Surprisingly for me, the current team principal of Scuderia Ferrari - Maurizio Arrivabene - and a few other Ferrari Personnel entered our gate and were on the same flight to Manama.
I used the opportunity and asked for an autograph - which I got - and wished them lots of luck for this weekends race :D

Boarding started at around 09:45 am - 45 min before the new scheduled departure time - … it took almost 1h to complete it because the new aircraft was located at a remote ramp which was very far from the concourse.

After the boarding the captain was speaking to us and told us the reason for the 2h delay.
He said, that the engineers were not happy with some engine data. After he looked at it, he agreed with the engineers that it would be better to chance the aircraft.
Well, safety first - right decision!! 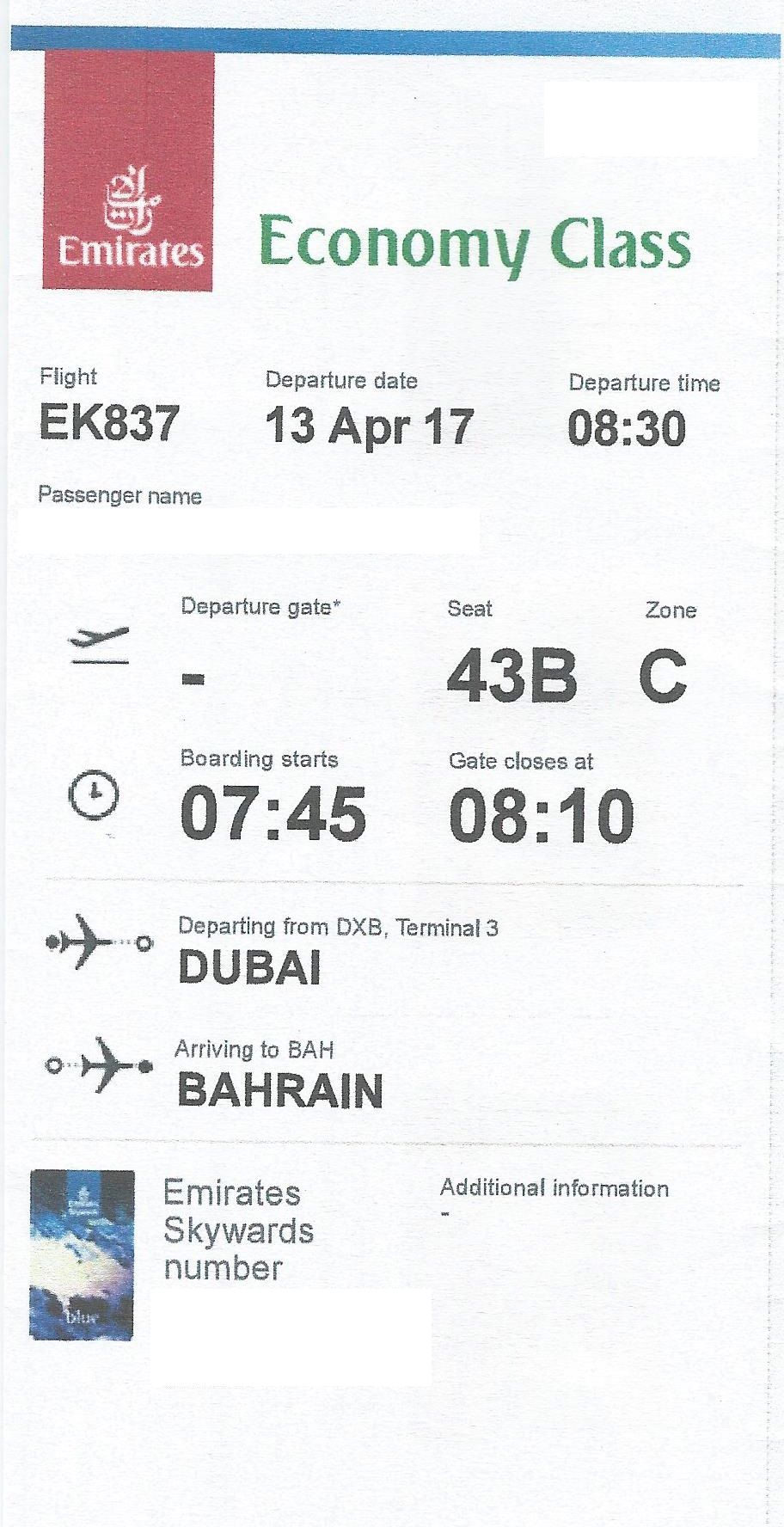 Pictures during taxiing and departure

After departure, we made a sharp left turn and headed south along the coast of the UAE.
That offered some great views to Dubai. 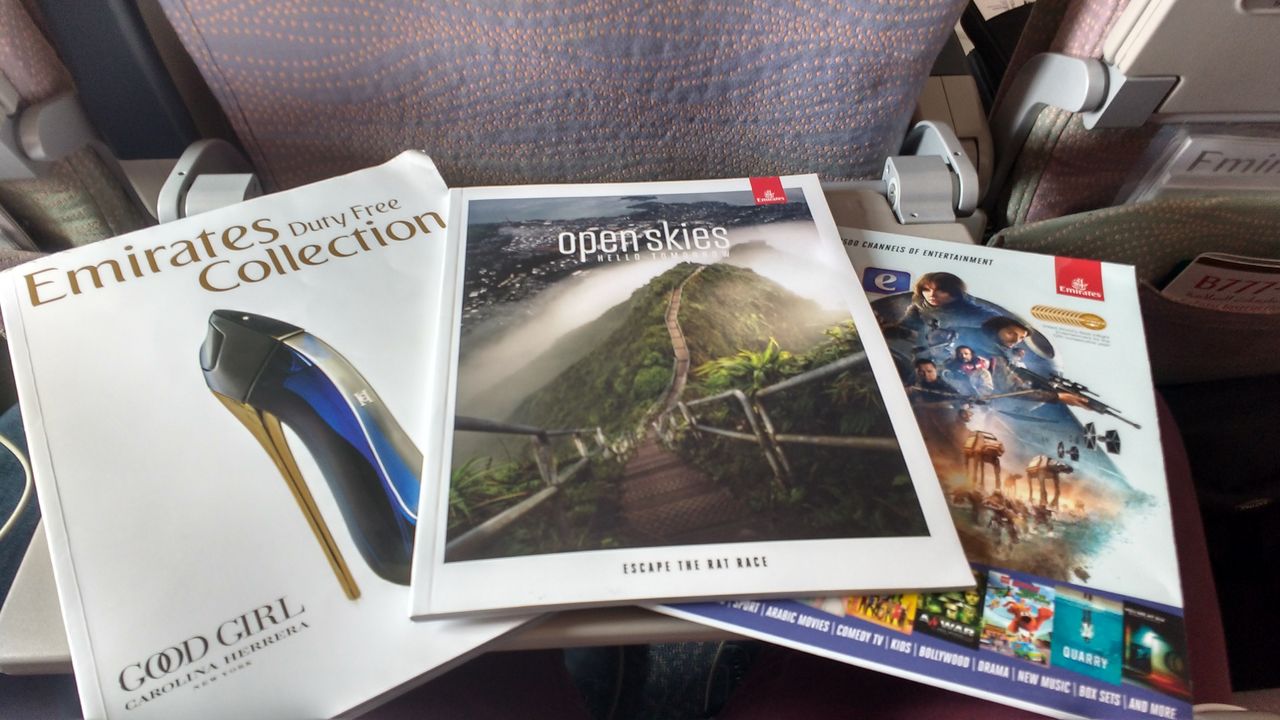 Food on EK837
There were no menu cards issued to the passengers.
The EK crew started with the service very early - no wonder for such a short flight and such a huge aircraft.
Everyone got a tray with a cheese and ham sandwich and some sweets, for example nuts.
Bottled water was also on the tray and coffee or tea was also offered.

So the meal for that short flight was nothing special, but it was okay.

An extra note: The cabin crew was very kind.
They appologized to almost every passenger and offered their help to make the flight as compfortable as possible - even with the delay.

As you can see in all the pictures, it was very dusty and – of course – hot in DXB and BAH.
Around 35°C and up to 45°C (on Saturday) in April …. haha way better than in Europe.
We still had some snow in some regions of Bavaria during the Easter Holidays :D

Lots of work is going on at BAH.
I guess they are building a new terminal and extend the Airport a little bit. 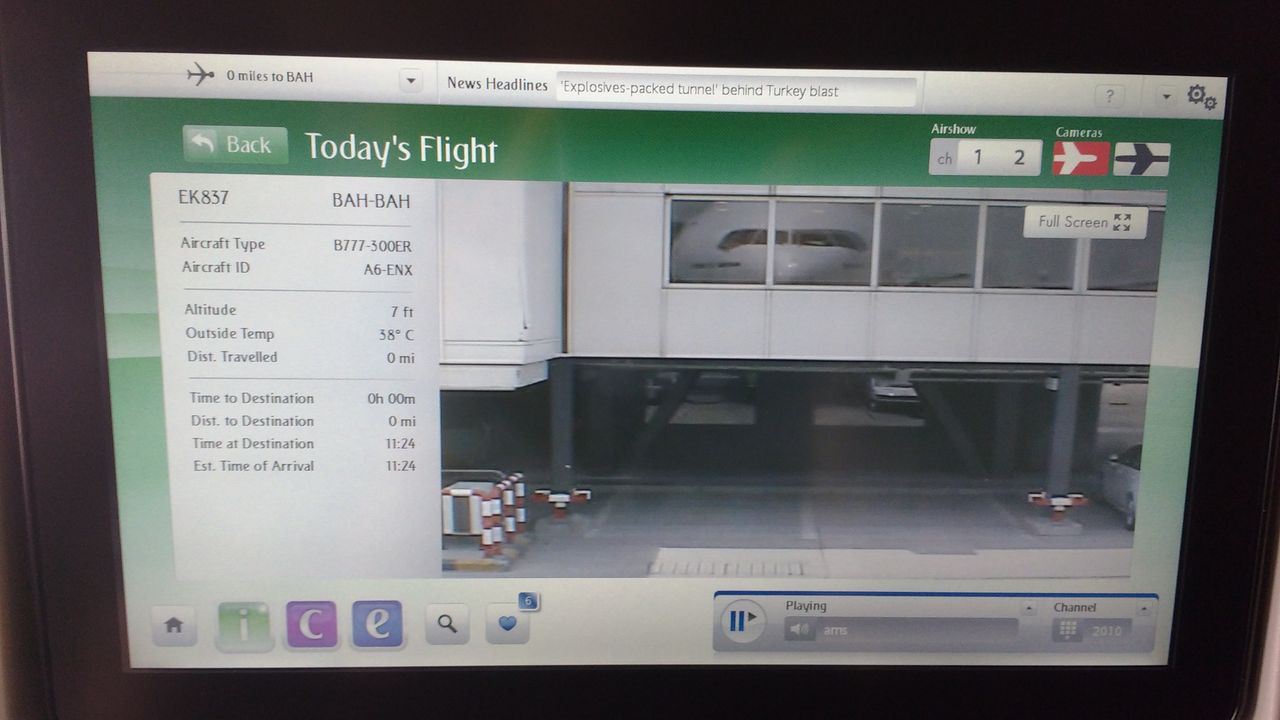 Another great flight with Emirates.

Yes, the delay was annoying - but like I said - safety first.

It is always nice, when a widebody aircraft is used for such short flights.

The contributors of Flight-Report published 11 reviews of 3 airlines on the route Dubai (DXB) → Manama (BAH).