By NGD16 BRONZE 2856
Published on 26th January 2019
Welcome to the second part of the trip to Asia in December, this part will cover the flight from London Heathrow to Hong Kong with Cathay Pacific Airways.

After arriving from Munich, because of the delay I only had about one and hour hour to my next boarding to Hong Kong. I took the shuttle bus from Terminal 5 to Terminal 3. Once I reached the security check at terminal 3, it was surprising that there was no people at all and staff were just chatting with each others. This was very good and I was through in no time. The gate for my flight to Hong Kong was assigned at gate 31. 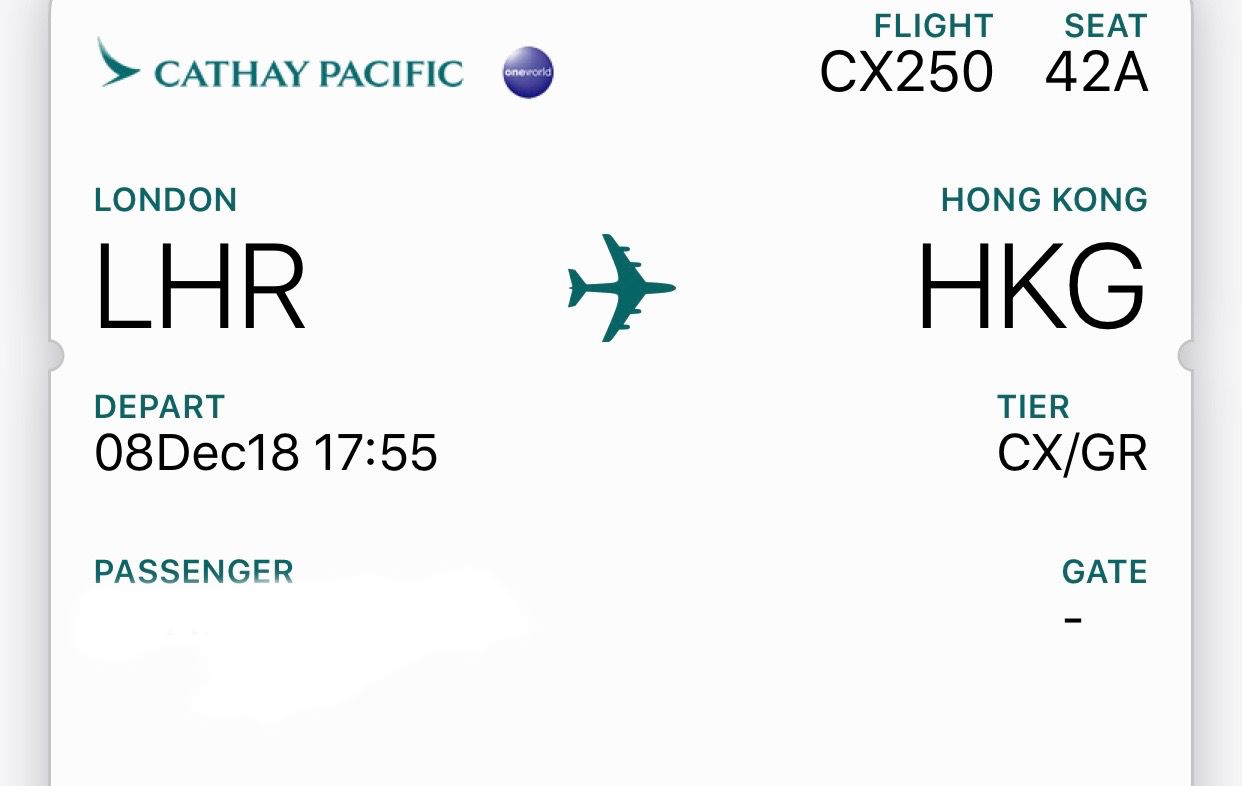 Obviously, I could not get any view of my aircraft due to the terminal design, after the trip I checked online and knew that the plane was B-KPW. This plane had already been painted into the new Cathay Pacific livery. It provided 4 classes in the configuration of F6C53W34Y182.
As I arrived at the gate, the boarding started soon in a few minutes. I boarded the plane quite late and a Japanese lady and a Chinese man were already seating the middle and aisle seats. That was why I did not take any photos during the boarding phase. Anyway, 42A was my seat, and was located in the 4th row of the economy class. The seat was still the old type that introduced in 2012. This was also implying that the plane had not yet refurbished into the latest 10 abreast cabin.

Back of the economy seat 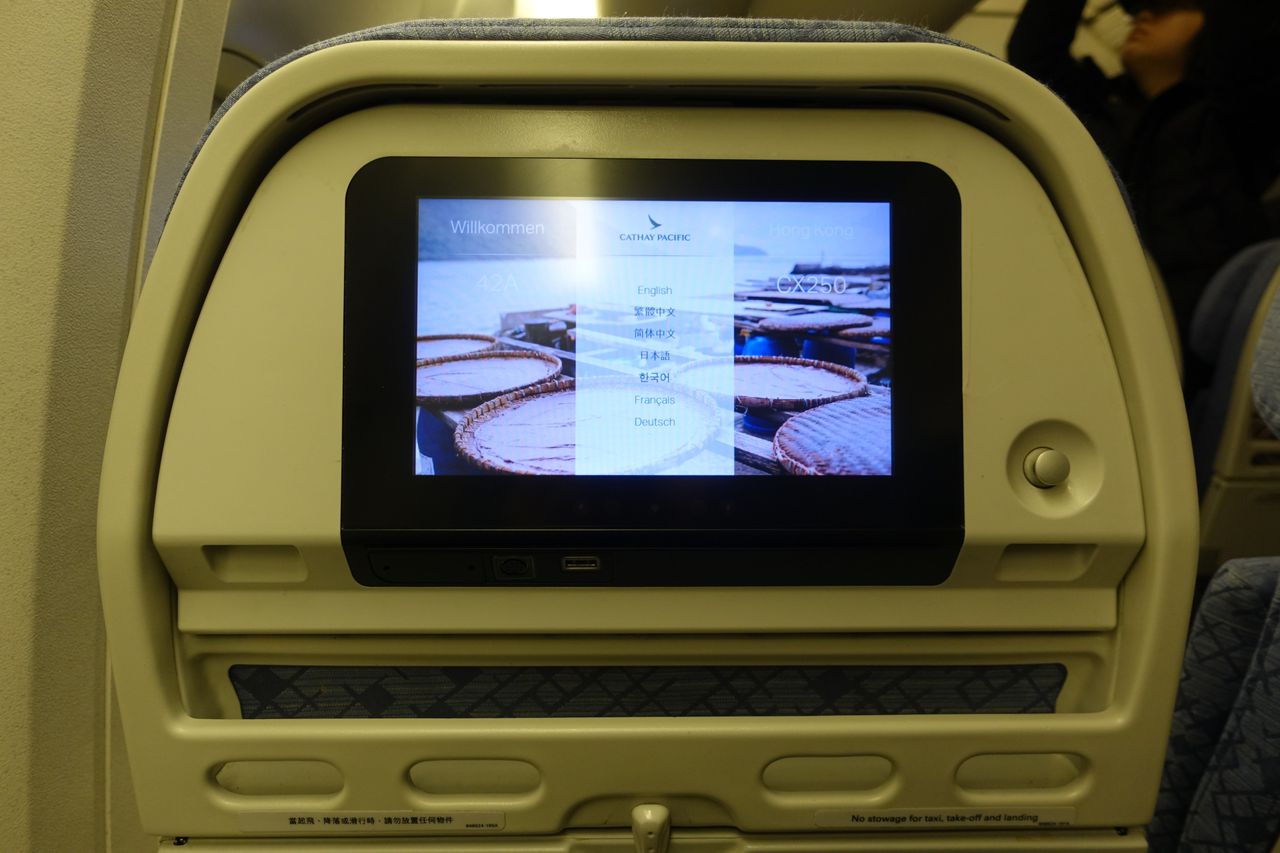 Cathay Pacific Airways had updated their entertainment system in this plane. and this version was identical with those in their A350. 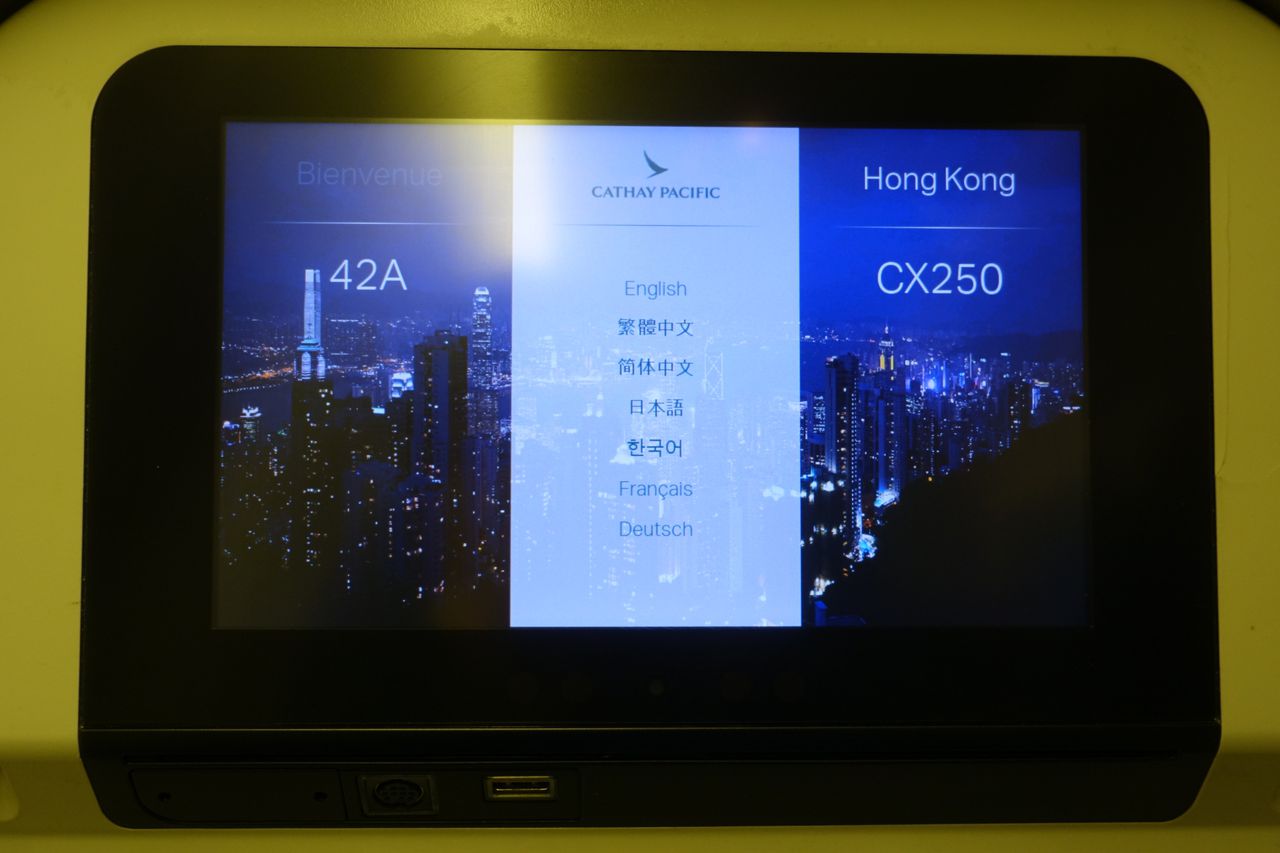 At 17:39pm, menu was distributed and according to the announcement, flight time was expected to be 11 hours and 18 minutes. 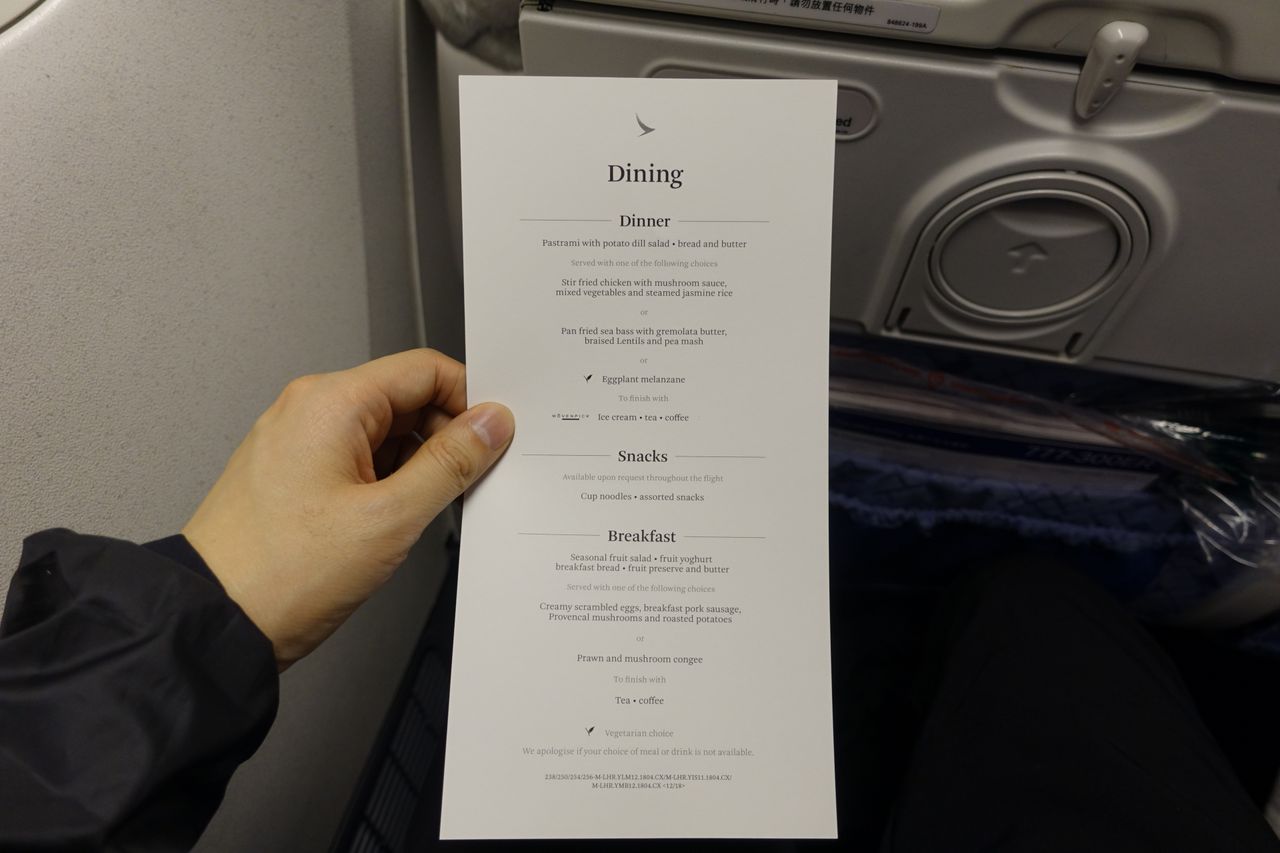 At 18:11pm pushback was commenced and cabin light was turned off for takeoff. It was raining quite heavily outside. With about 15 minutes taxi to the runway, we lifted off at 18:32pm at RWY27L.
10 minutest after takeoff, the seatbelt sign was switched off and I started to watch the first movie of the flight, The First Purge. 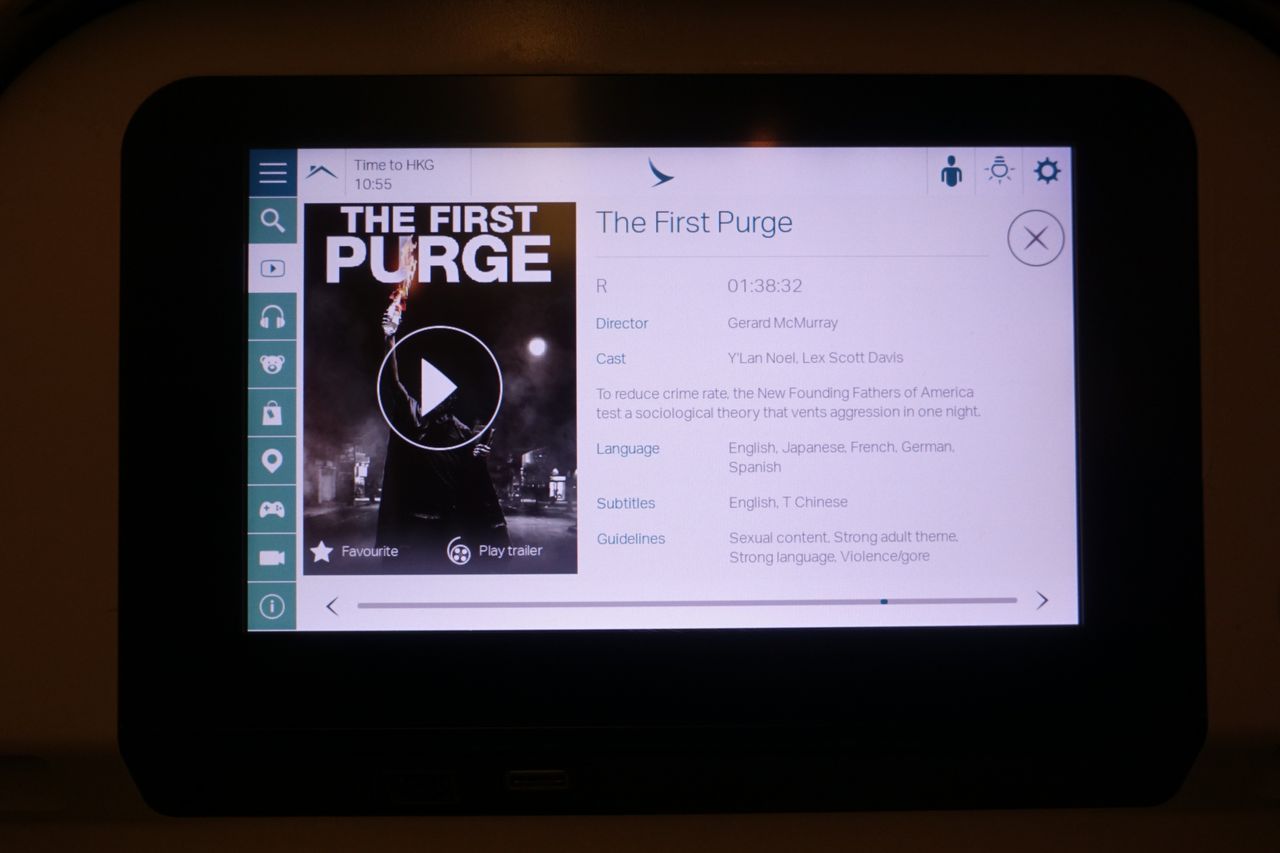 About 40 minutes after take-off, wet tissue, pretzels and drinks were served. 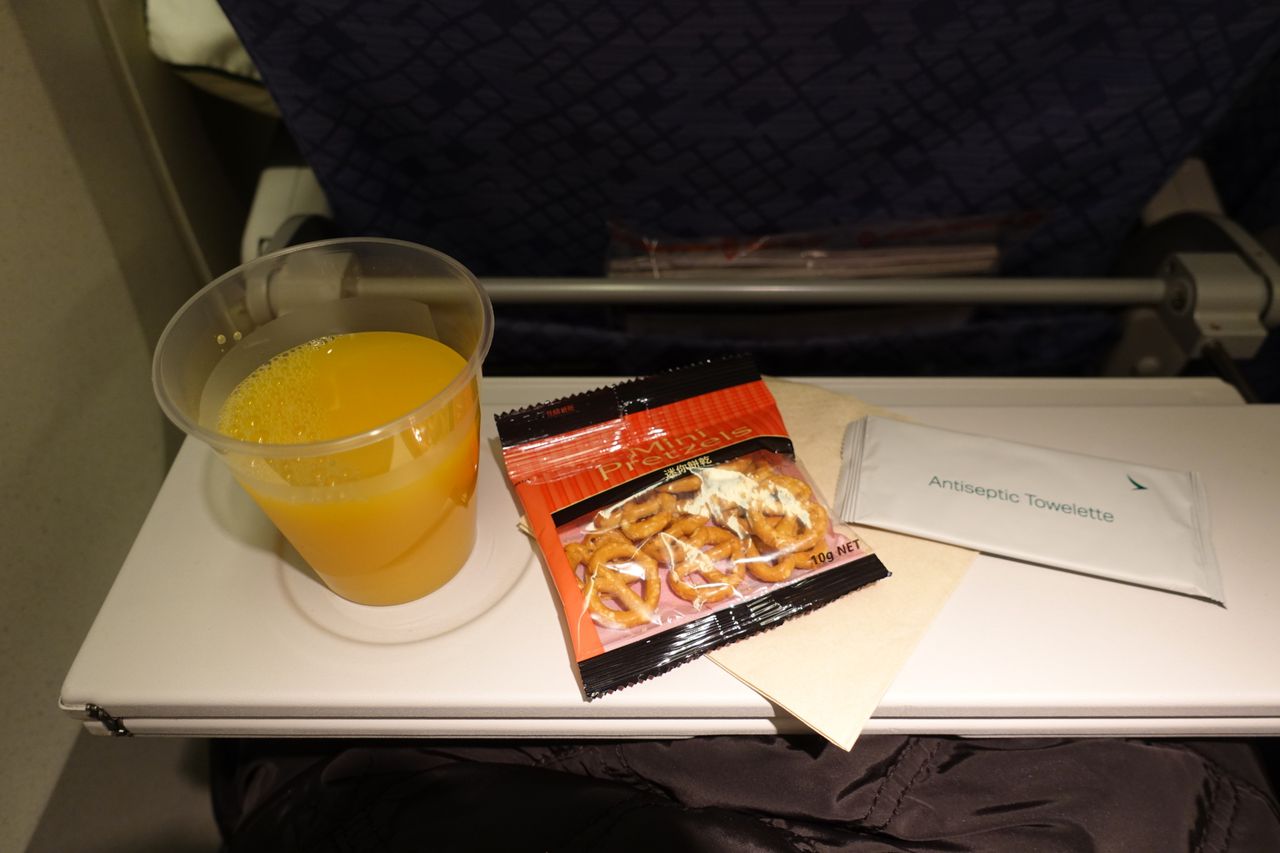 At 19:53pm, dinner was then served. I opted for the "Stir fried chicken with mushroom sauce". Honestly the taste was really good. 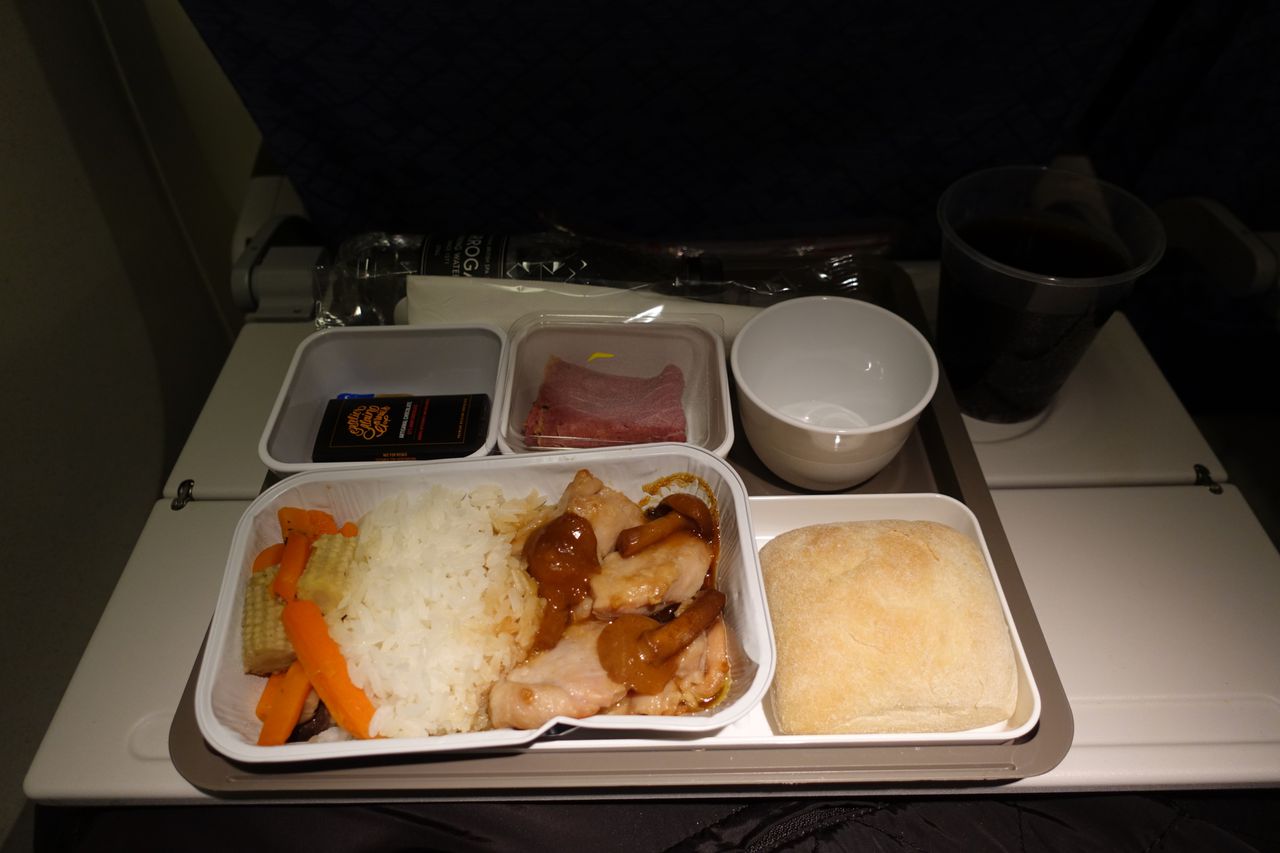 In the middle of the meal, ice-cream was given to everyone and I got the chocolate taste. 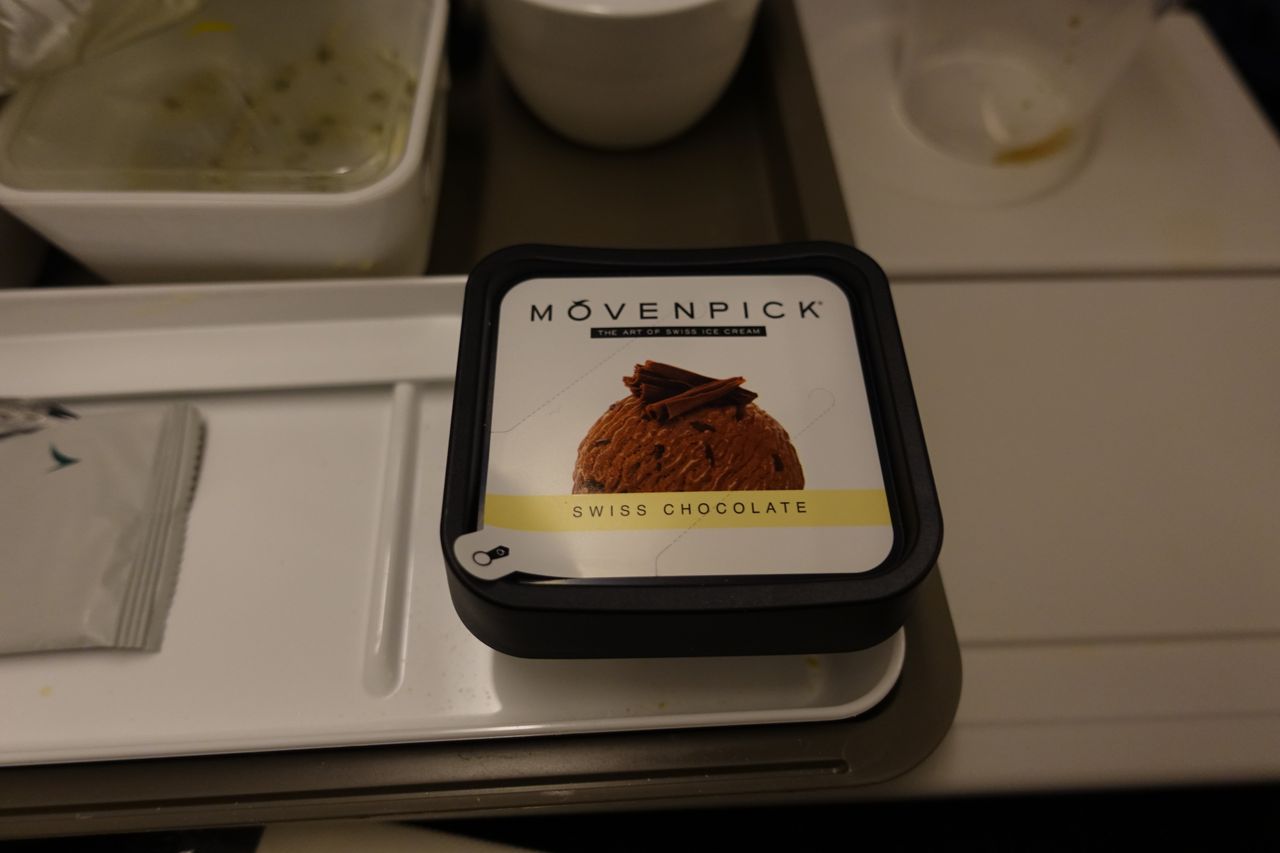 As I finished the movie, I checked out the flightmap. We were flying somewhere between Lithuania and Belarus. 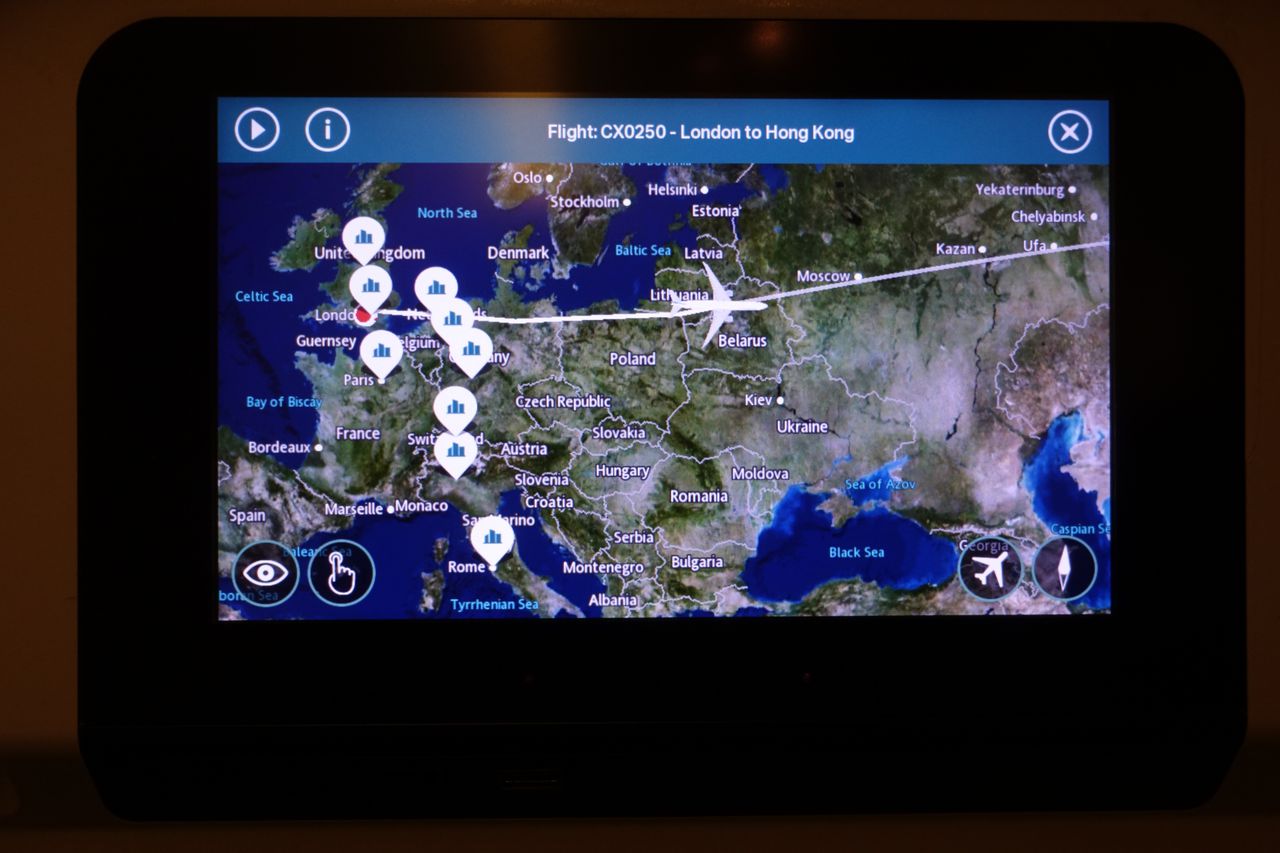 Then I started the second movie, Mission Impossible-Fallout, about 20 minutes later, the cabin light was switched off. 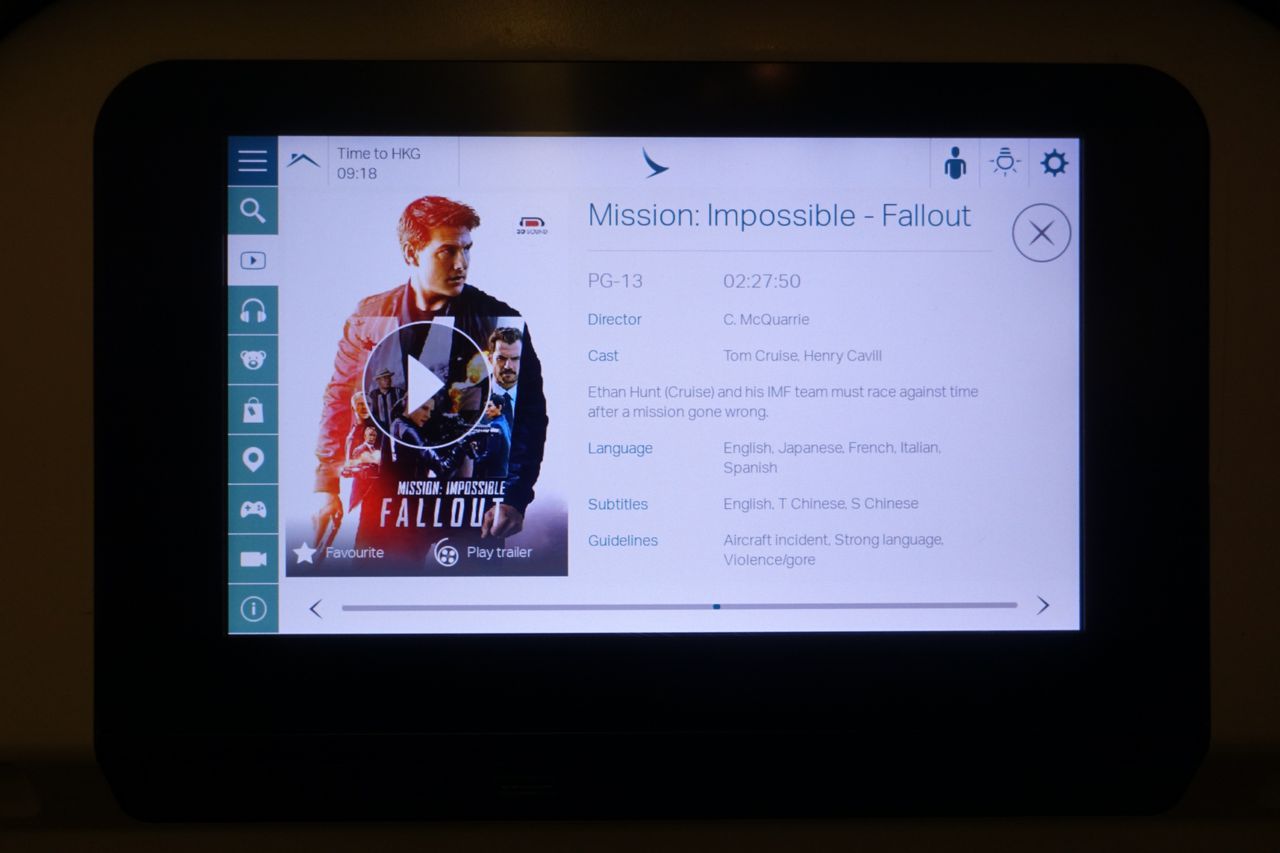 At 21:50pm, my neighbor was leaving her seat and I took the chance to go to the lavatory. The closest lavatory for me was the one behind row 45, otherwise I would have gone to the very end of the aircraft. 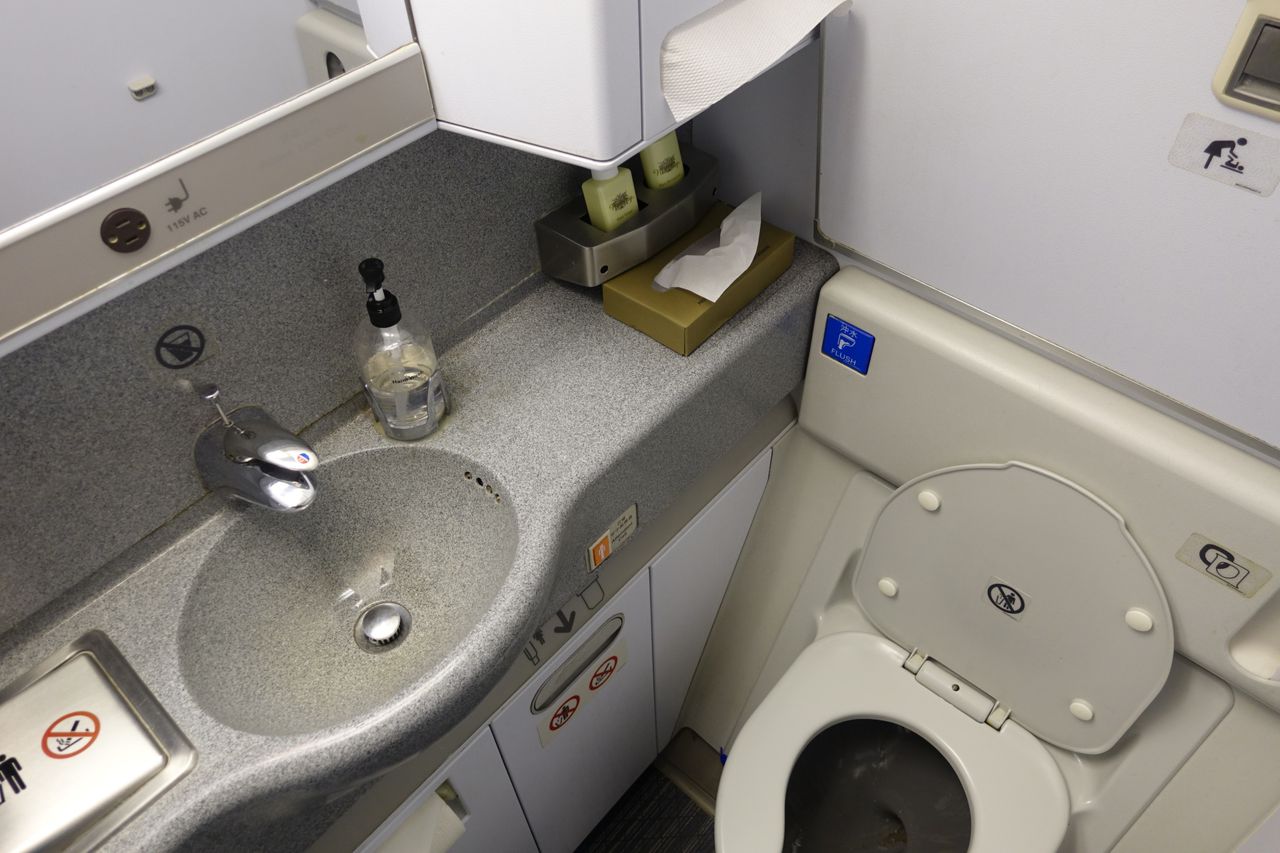 As I mentioned in one of my Cathay Pacific flightreport, I really like this hand cream. 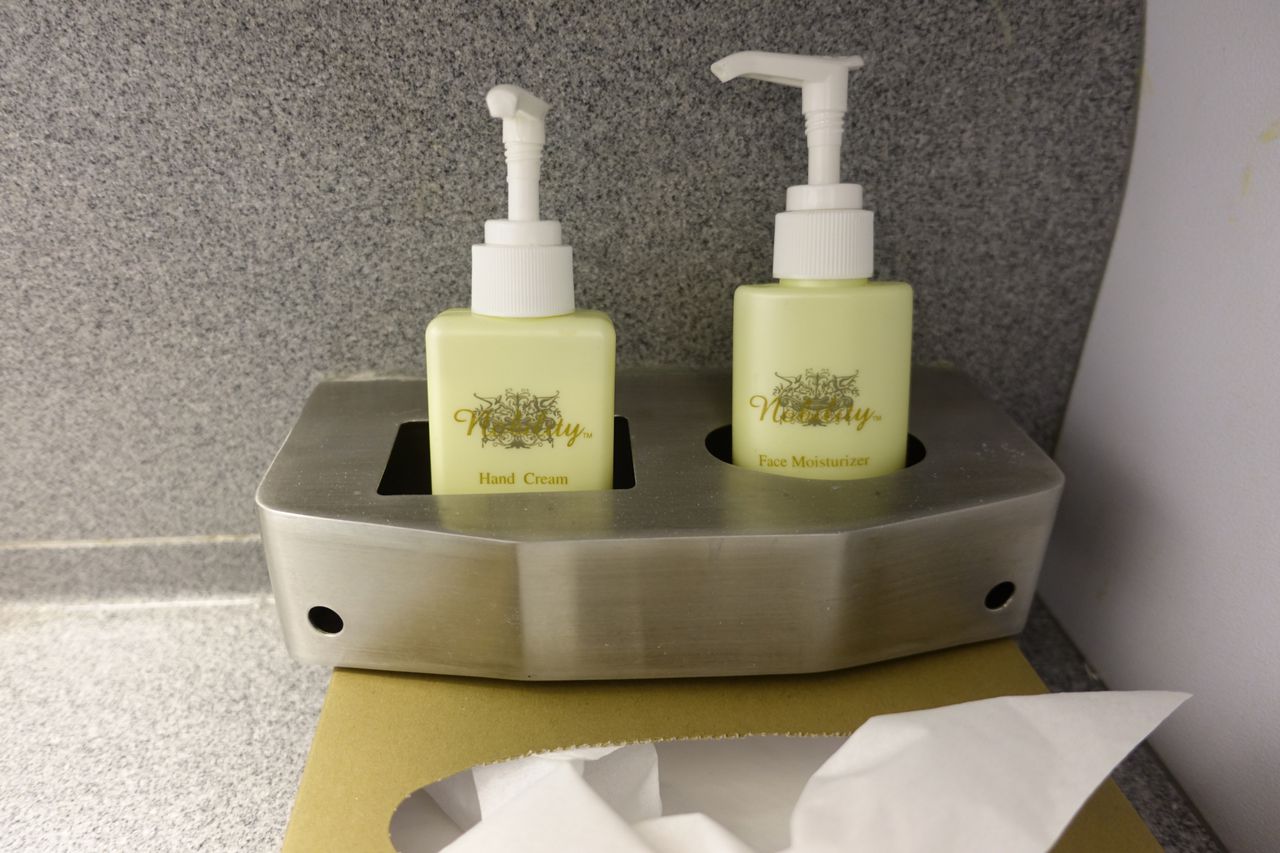 I also checked out the small snacks bar next to the toilet and grabbed myself a banana and an orange juice. I returned to my seat and continued with the movie. After I finished the movie, I slept for about 50 minutes and as I woke up, we had entered Kazakhstan territory. 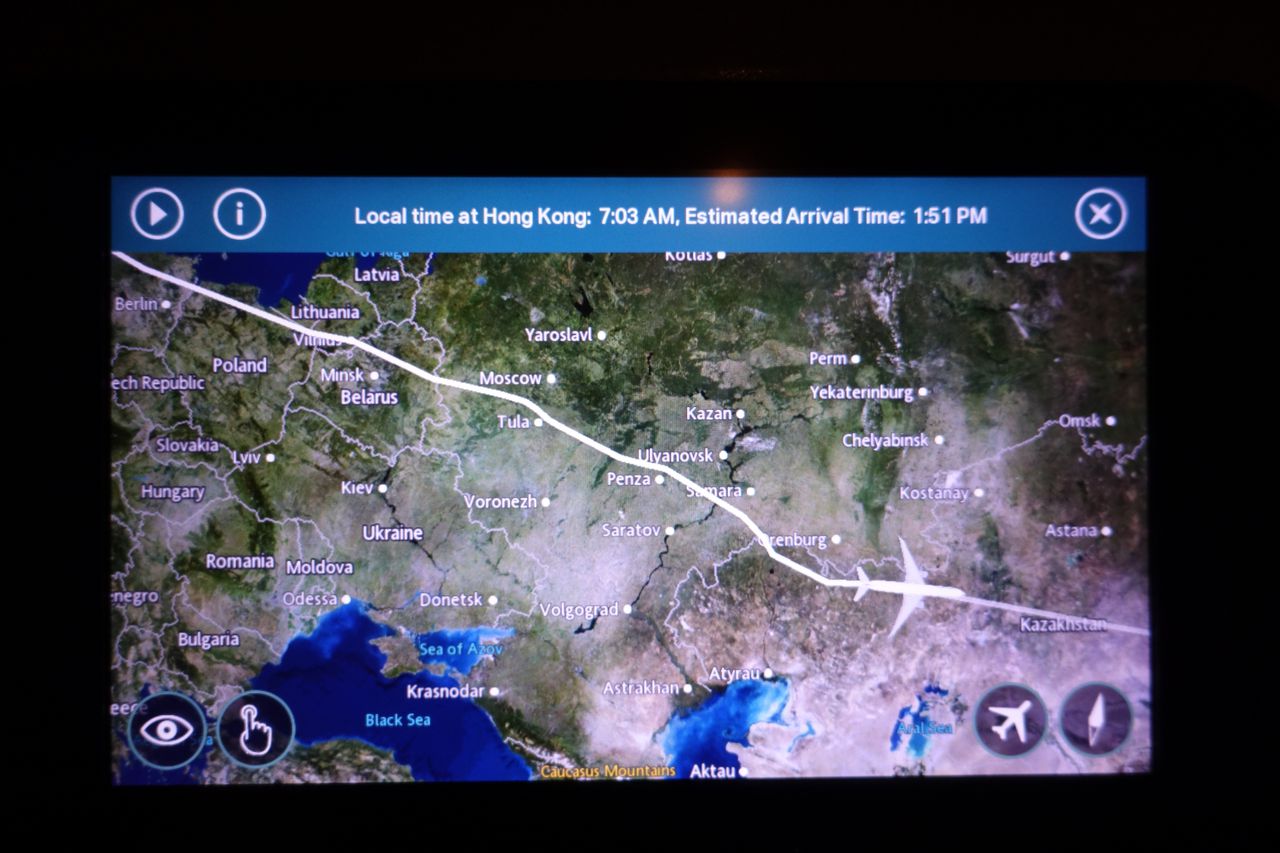 I eventually started watching the third movie of the flight, The Predator. 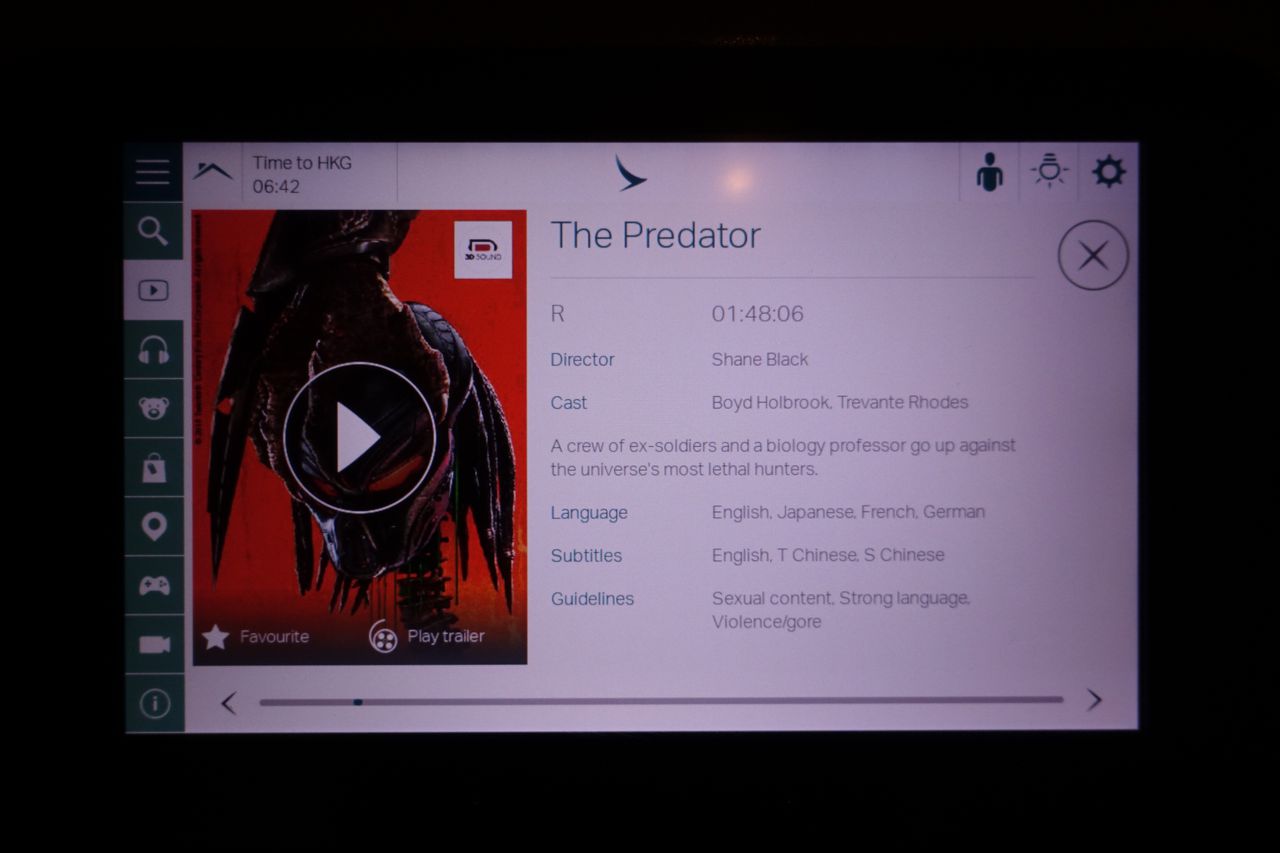 When I finished the Predator movie at 2:50am, we had just entered China airspace. Then I had another 50 minutes nap. 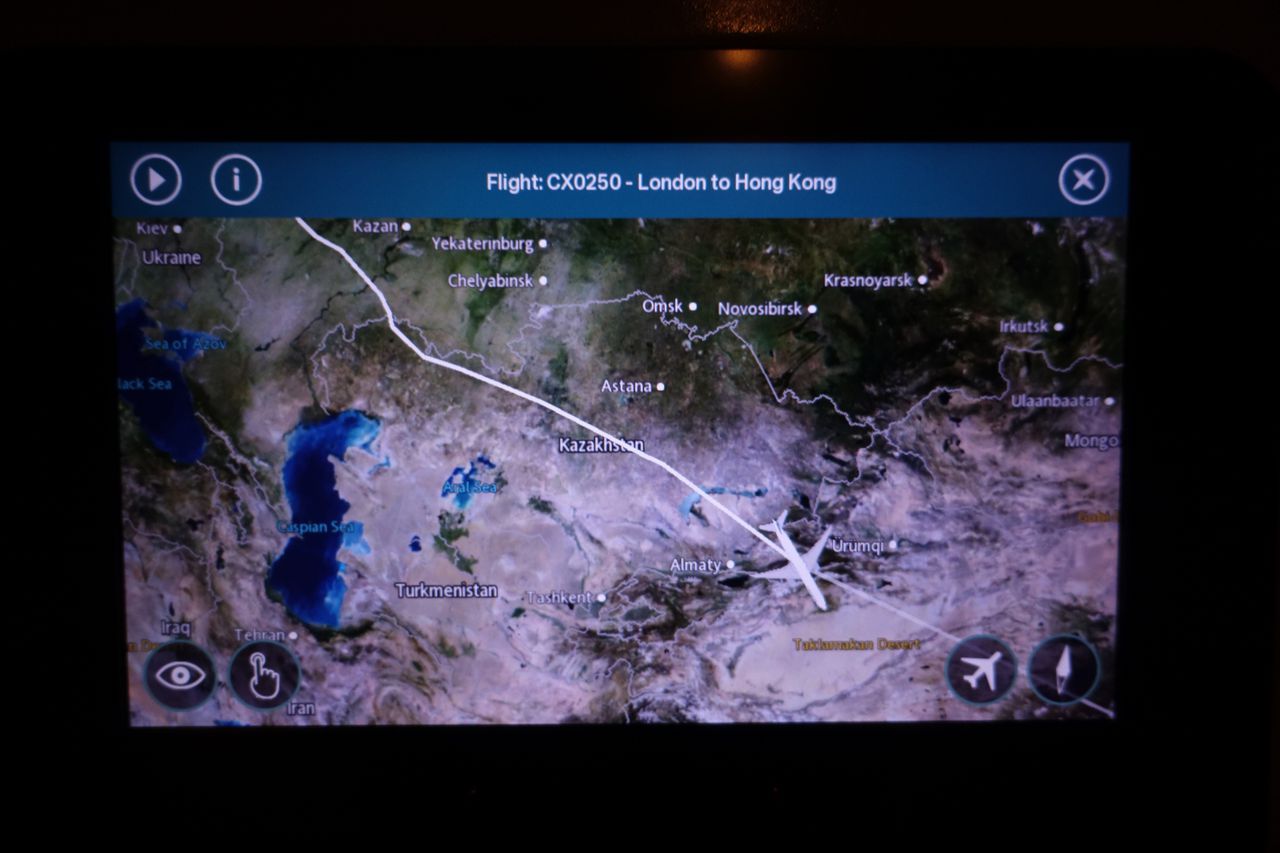 Flying over Qinghai province in China, somewhere east to the city of Xining. 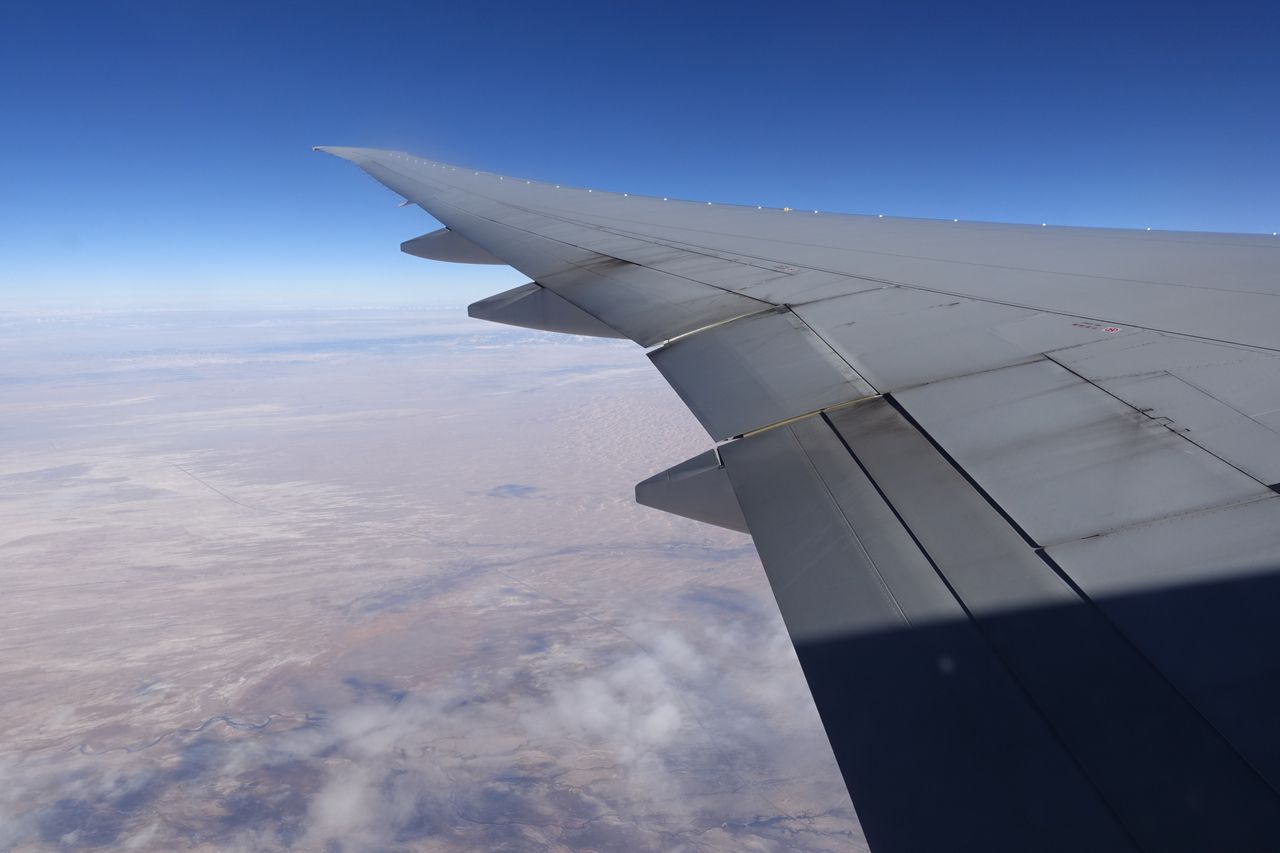 Still have approximately 3 more hours until we reached Hong Kong. 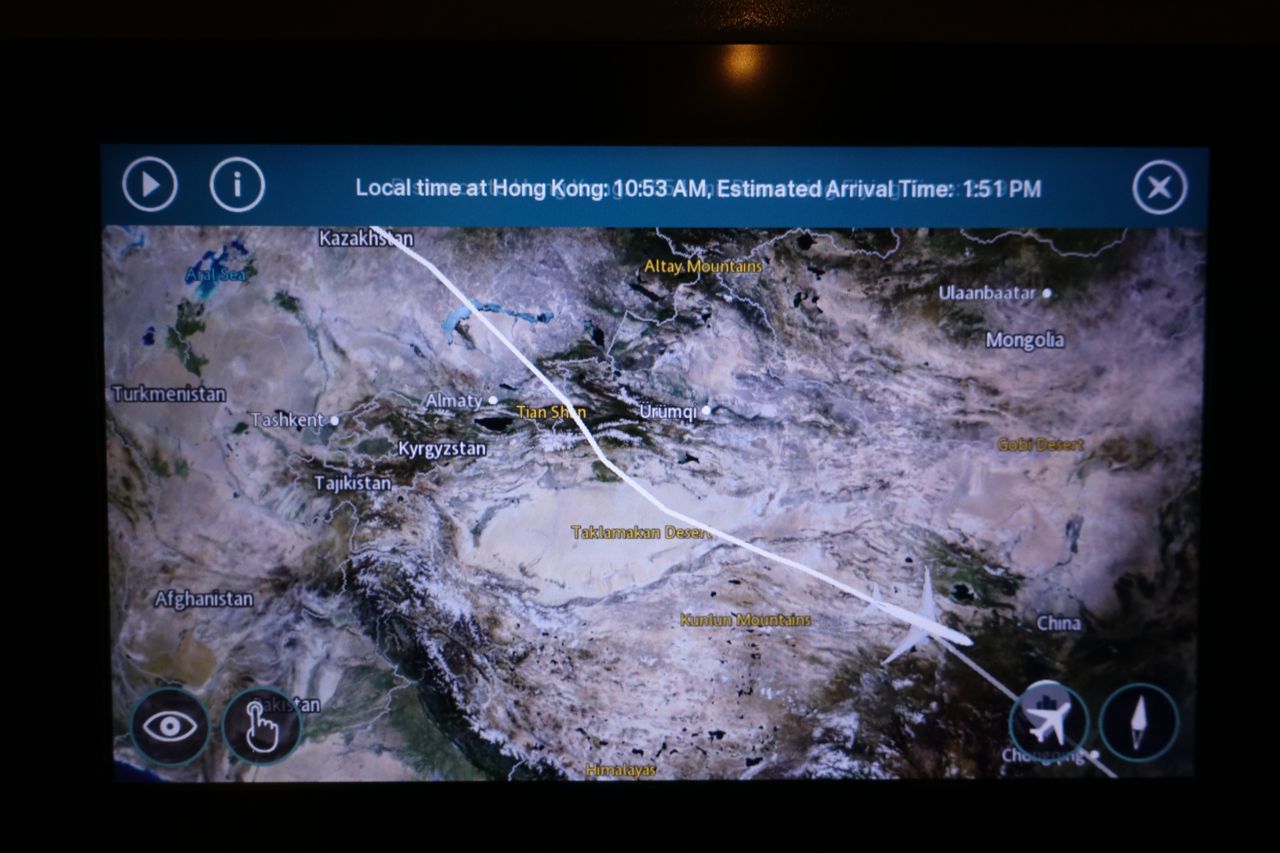 i then watched the fourth movie of the flight, The Meg, 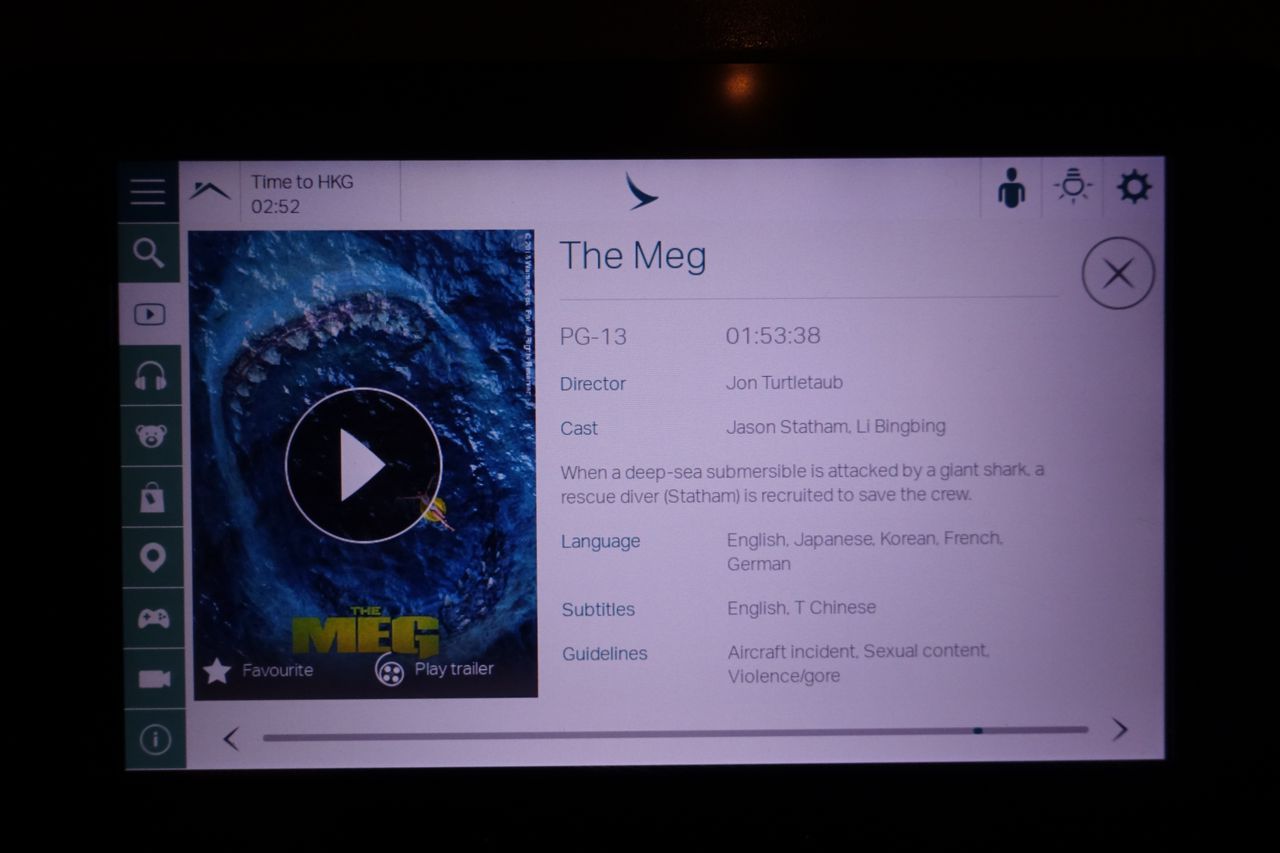 At about 4;00am, the crew distributed the wet tissue and some refreshment drink. Breakfast was served 30 minutes later. I took the scrambled egg option with orange juice. 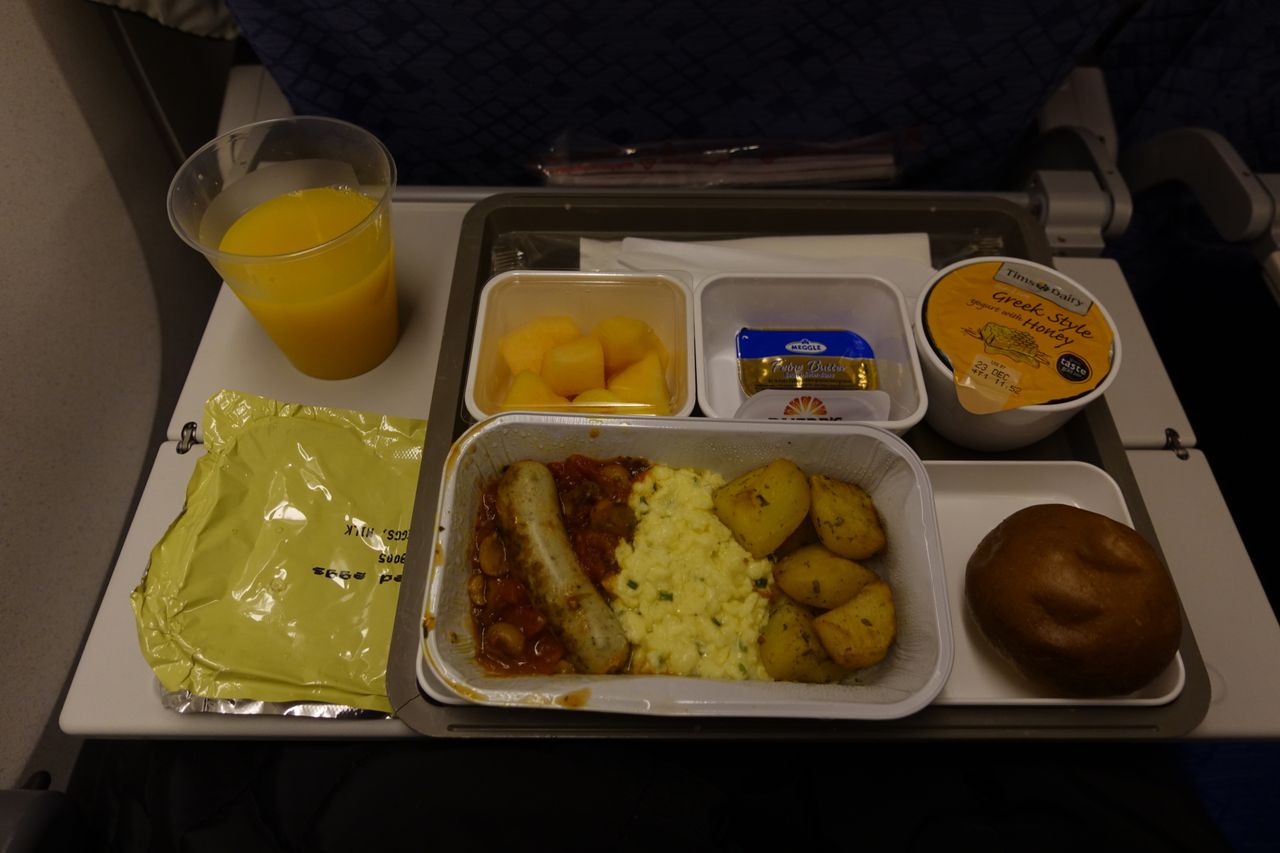 At about 5:10am, the announcement from the flight deck informing us that the expected arrival time would be local time 13:55pm and the descend would begin very soon. 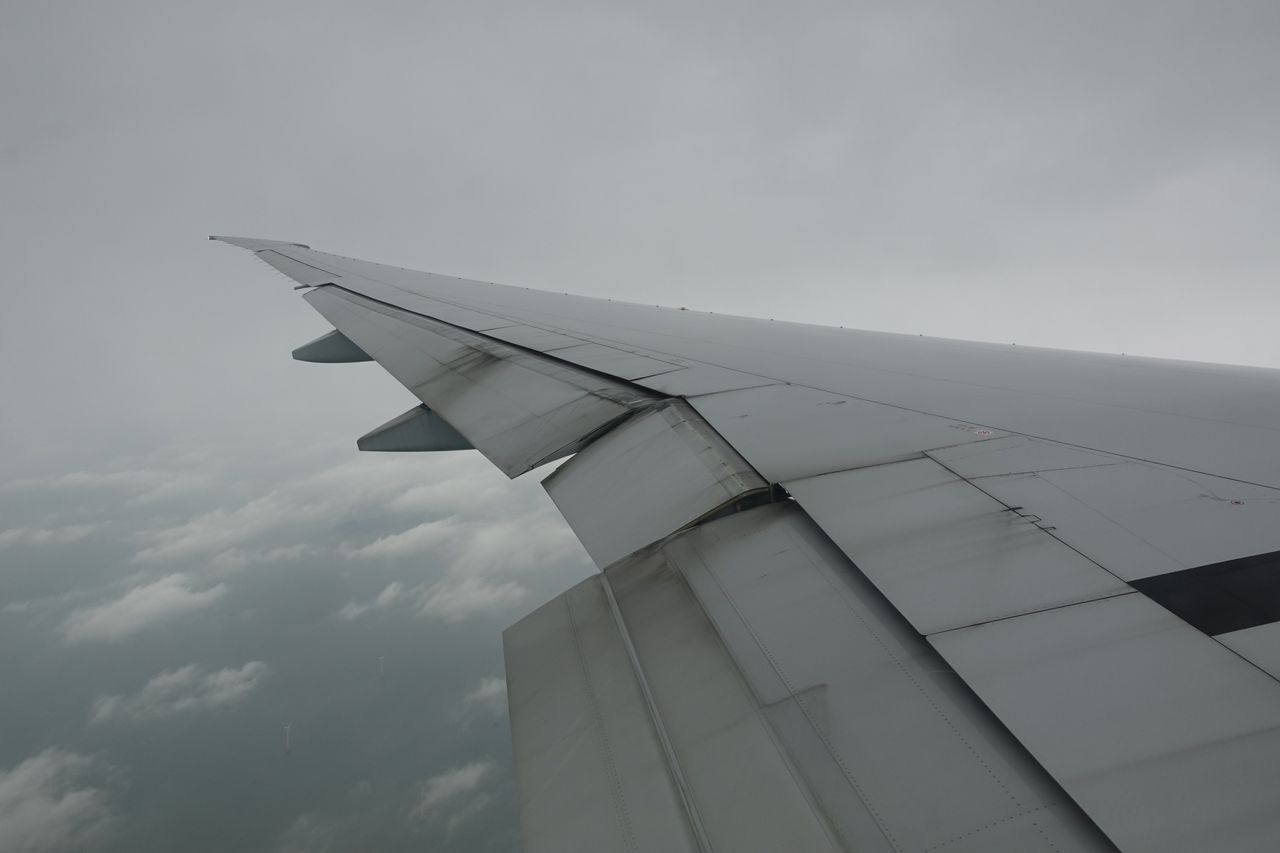 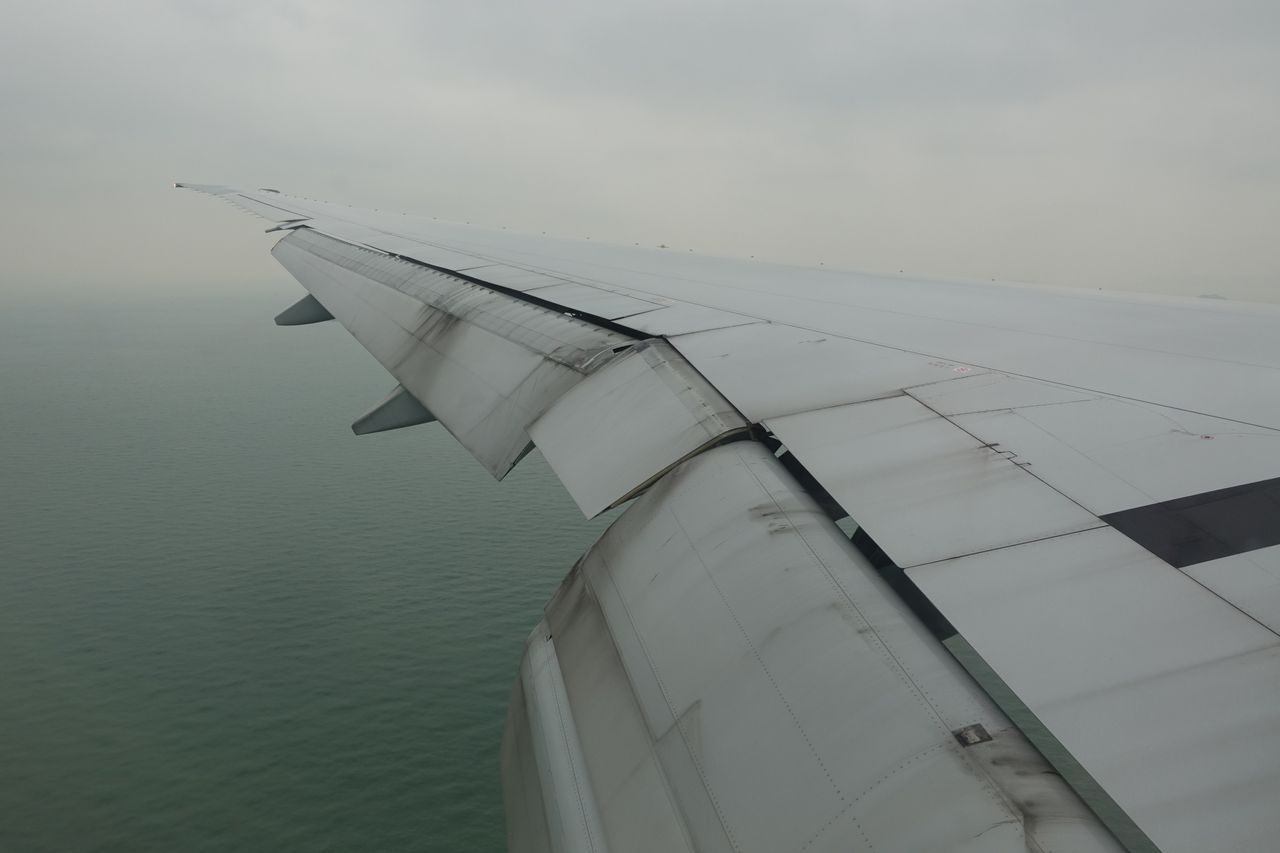 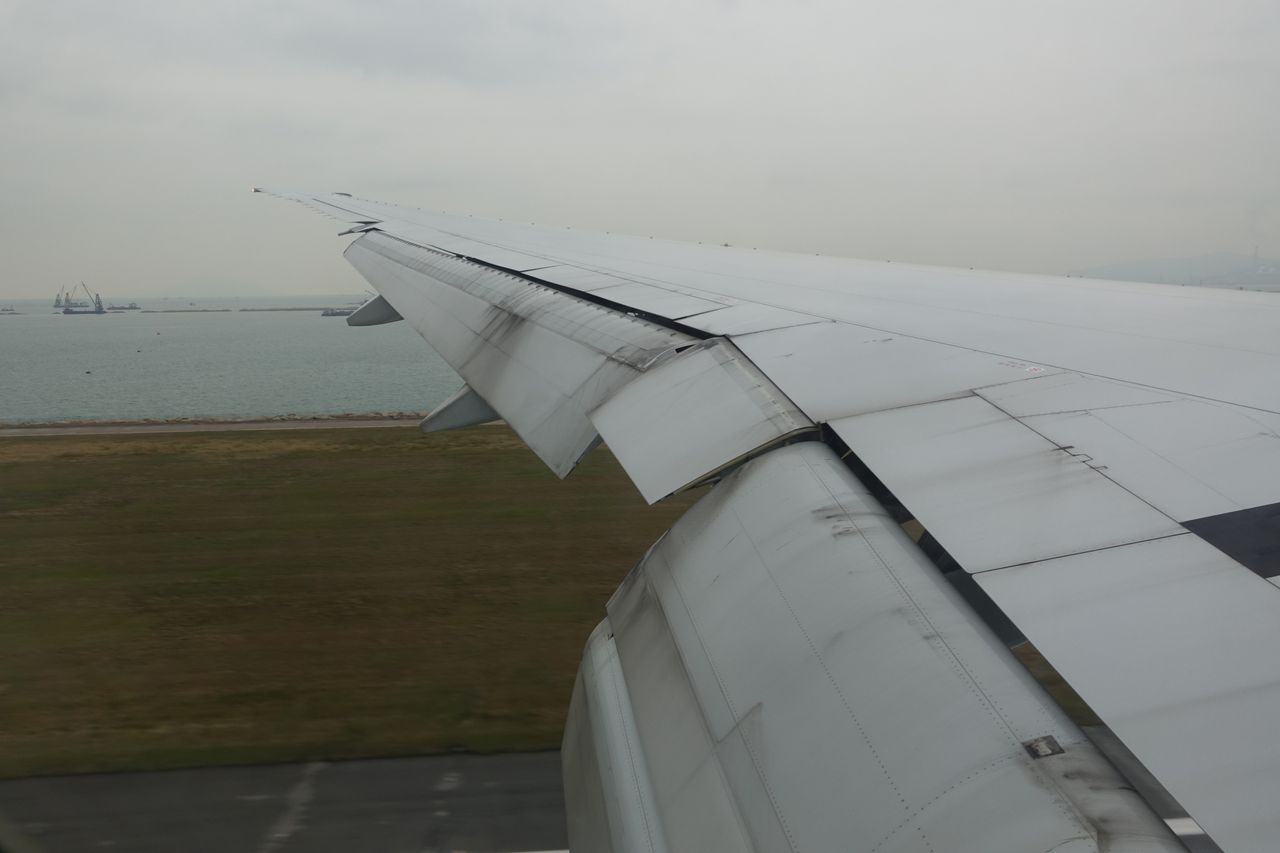 Finally we parked at gate 42 in terminal 1. 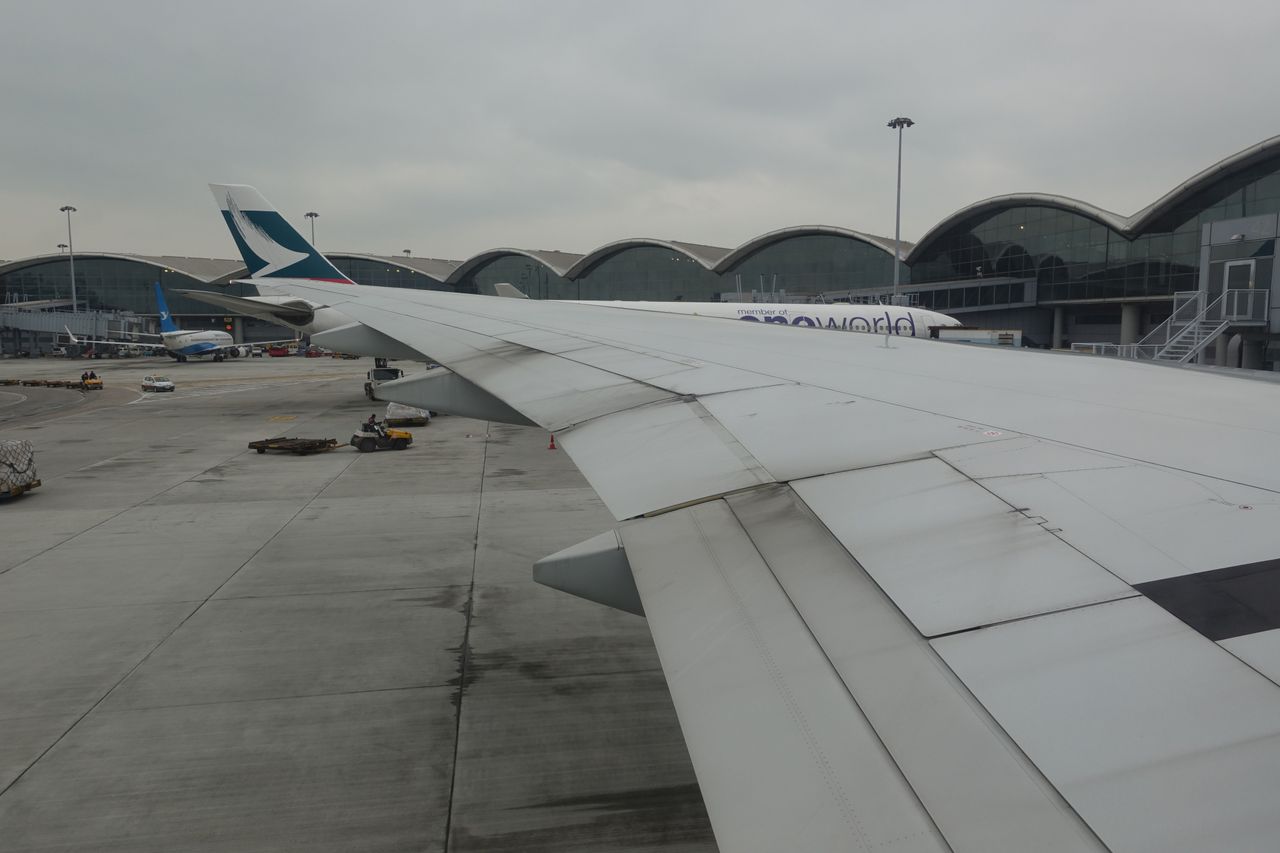 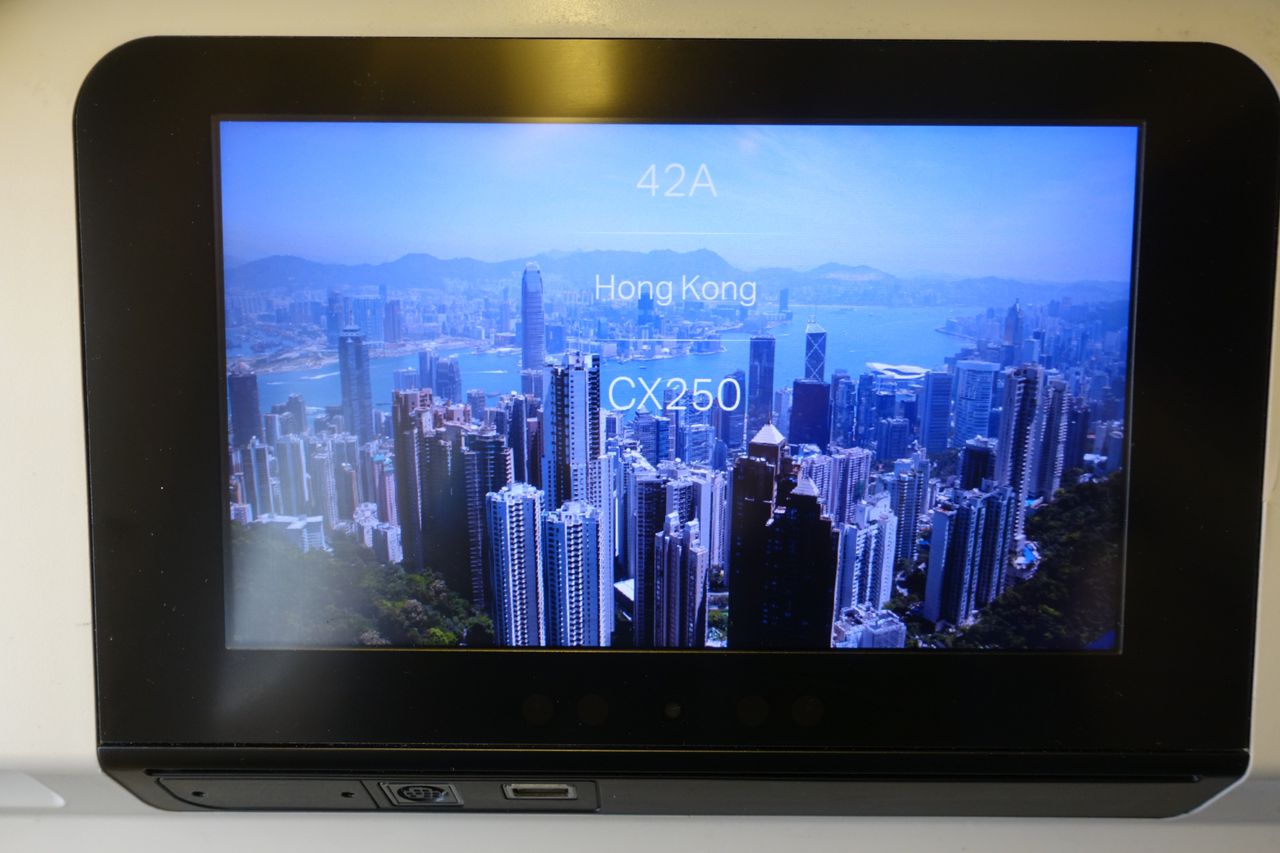 The last view of my seat. 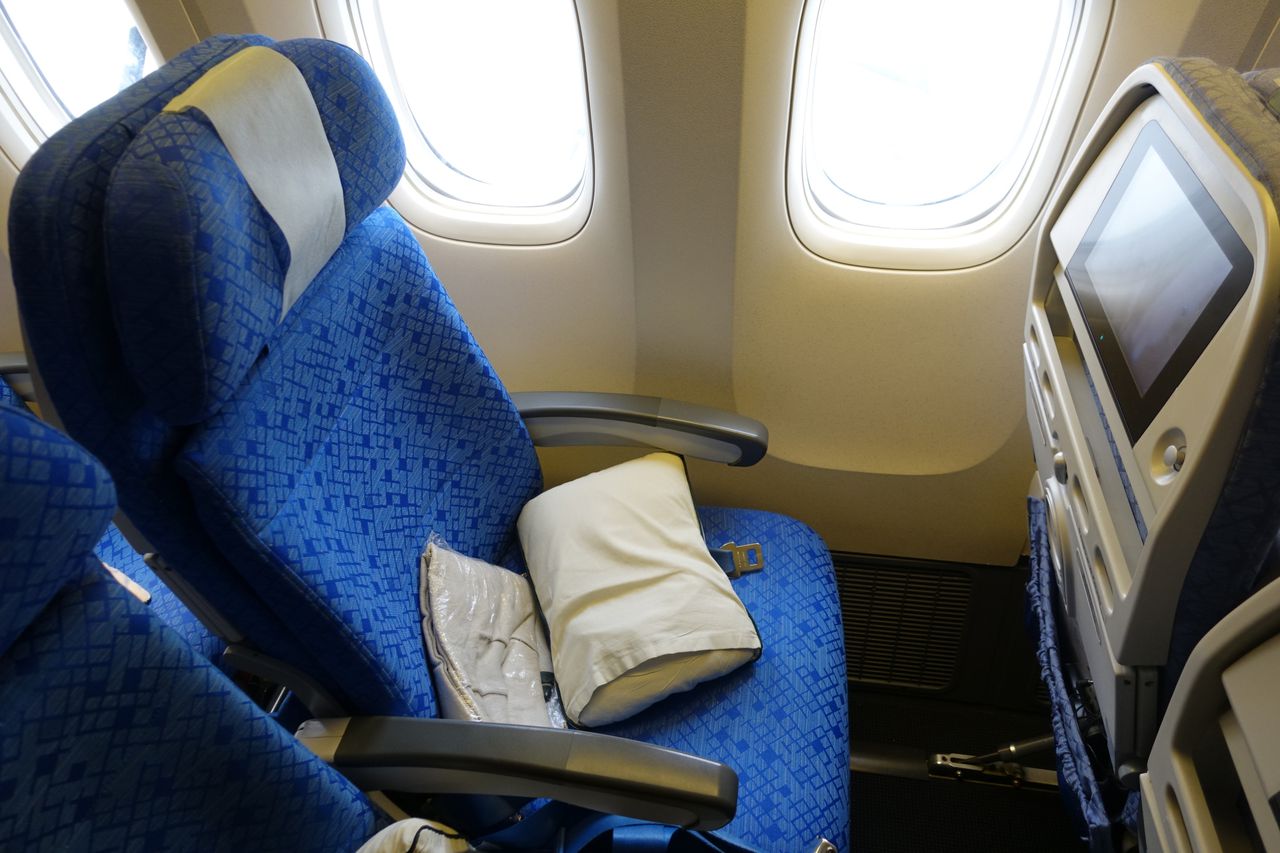 The contributors of Flight-Report published 9 reviews of 2 airlines on the route London (LHR) → Hong Kong (HKG).

The average flight time is 11 hours and 51 minutes.