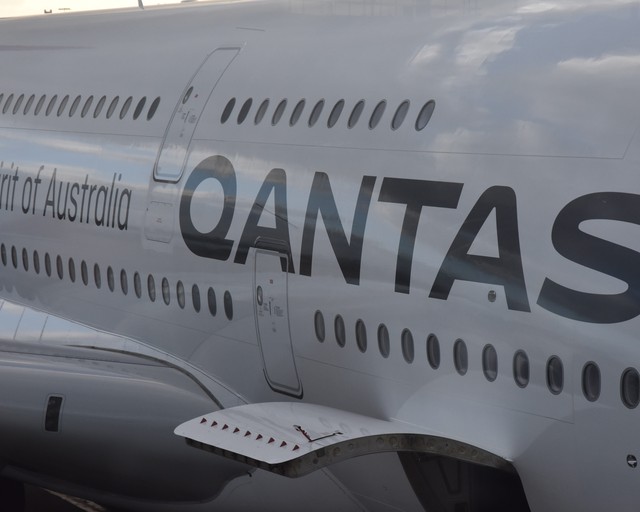 #13 out of 78 Airlines A minimum of 10 flight-reports within the past two years is required to appear in the rankings. 155 reviews

By thetravellingbloke 2846
Published on 25th February 2019

Upper deck economy on the A380s is one of the best spots to fly in if you’re stuck in economy as Qantas‘s A380 upper deck economy consists of only 5 rows, making it more quiet, less of a hassle and more importantly, priority boarding together with business and premium economy passengers.

Departure terminal: Terminal 1 (International)
The scheduled departure time for the flight was 9:50 am and I was at the airport 2.5 hours before departure.

Check-in was done through self check-in kiosks, followed by self bag-drop. 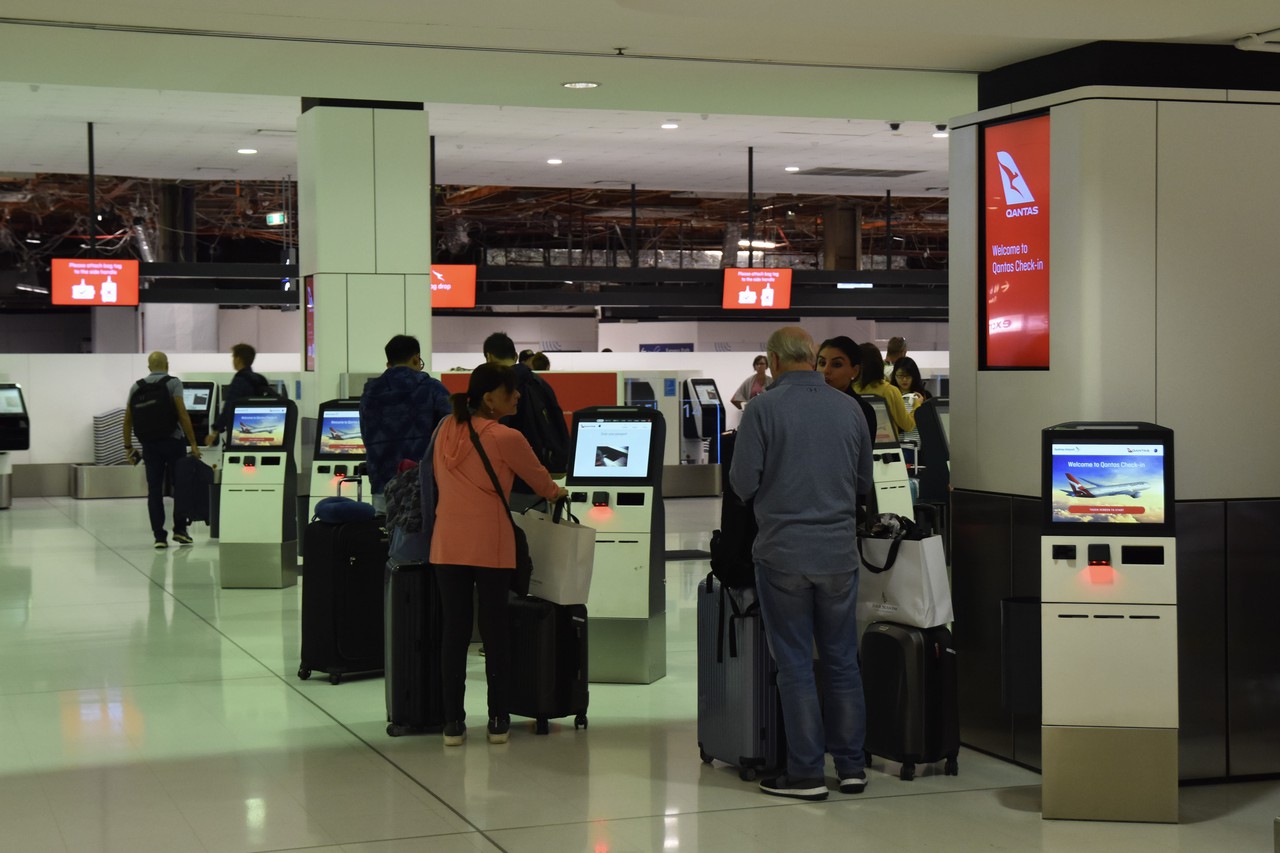 These kiosks make things a lot faster and more efficient, but at the same time taking over jobs and replacing staffs.

There’s a lot of dining options in the terminal, with a few restaurants and a relatively large food court area. 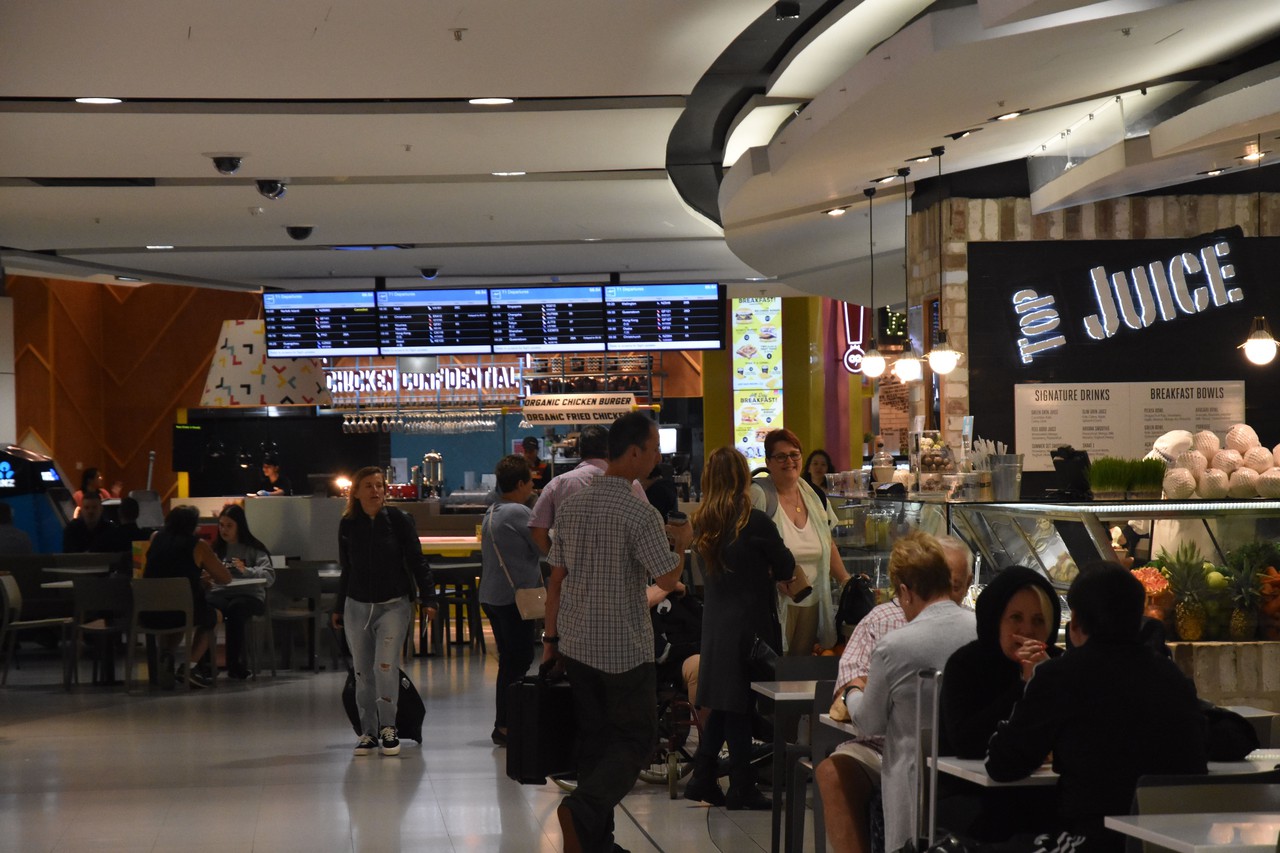 One of the best things about the food court here is the view. Passengers can look through the glass window to the tarmac. 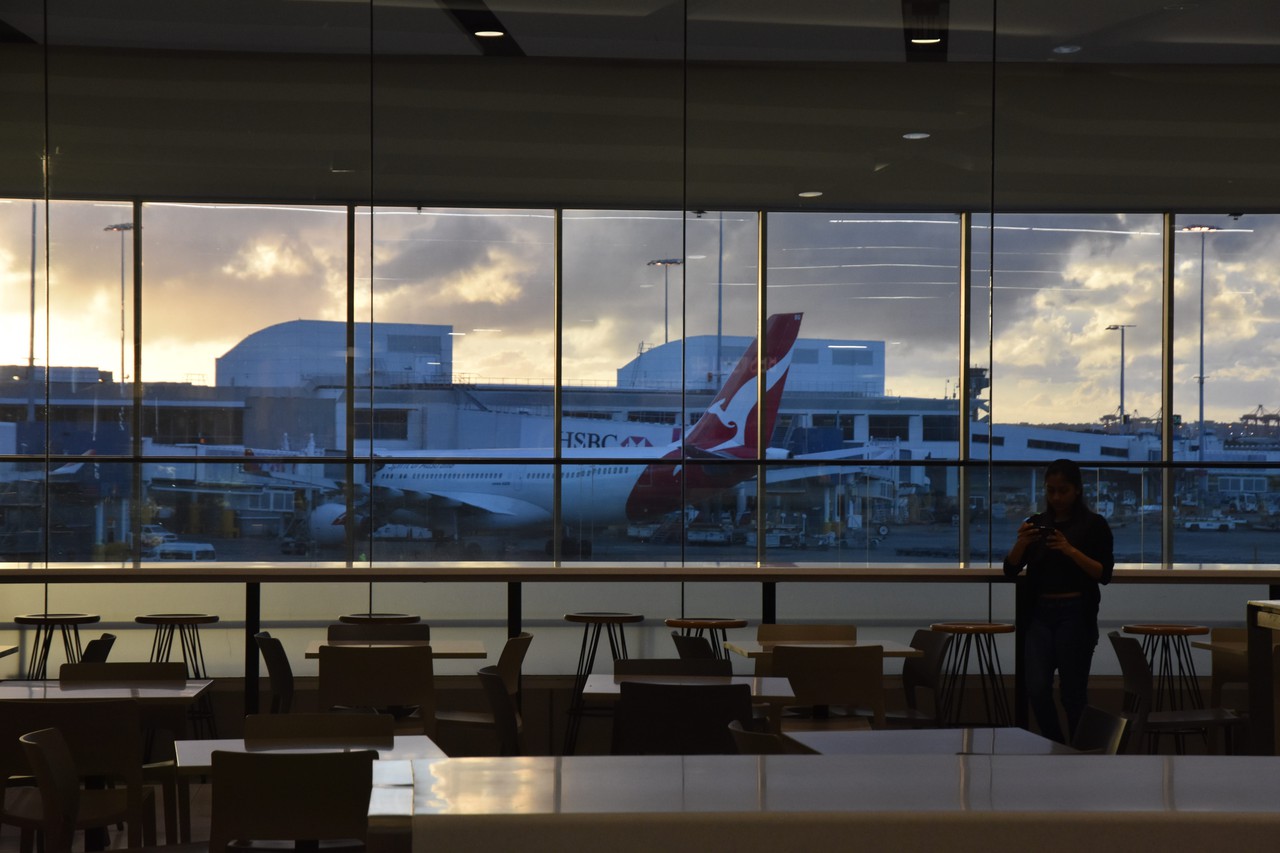 I always enjoy looking out the window with a cup of coffee and just stare at planes.

There was quite a fair amount of passengers in the morning but security and screening was quite quick.

After security, its a large duty free shopping area like any other airports. 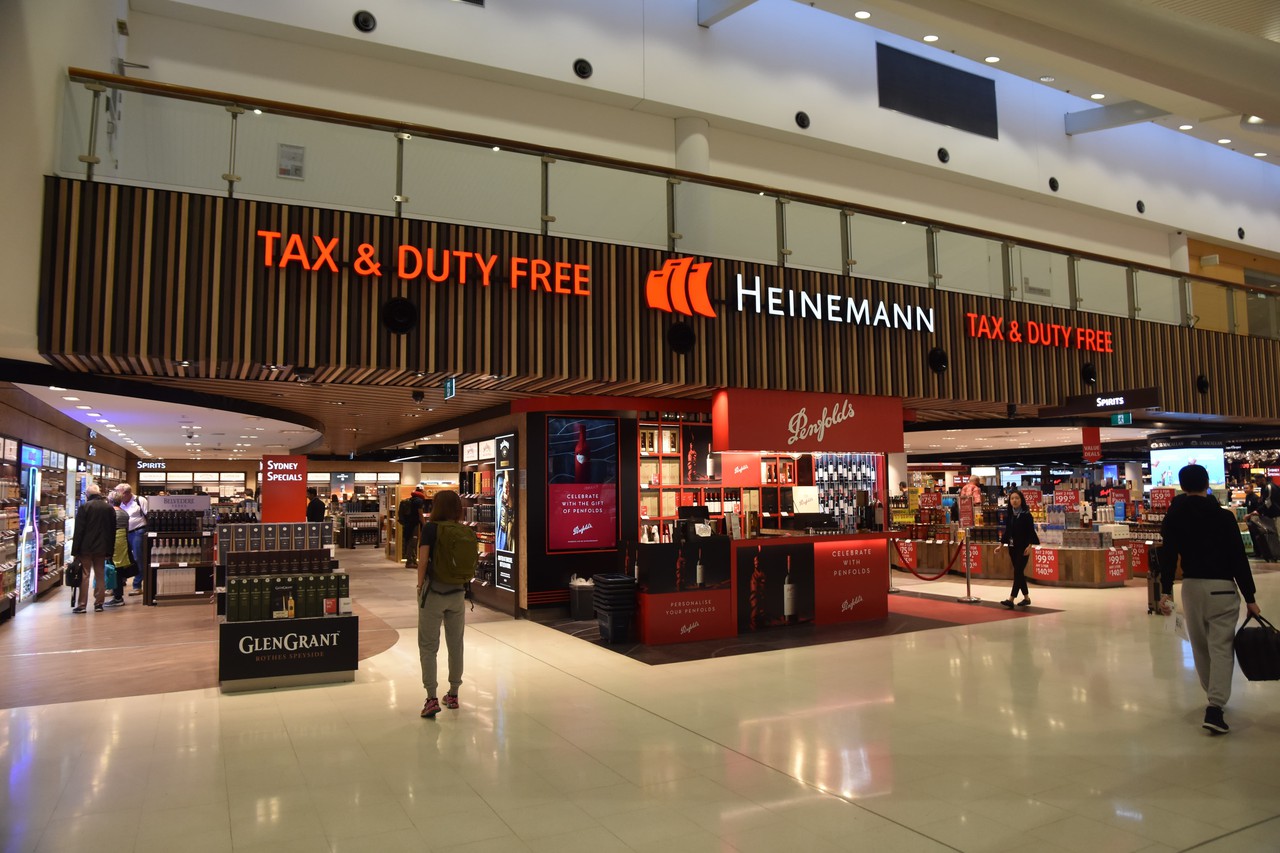 Apart from Australian brands and some last-minute souvenir shopping, there are also some luxury options on the other side of the terminal. 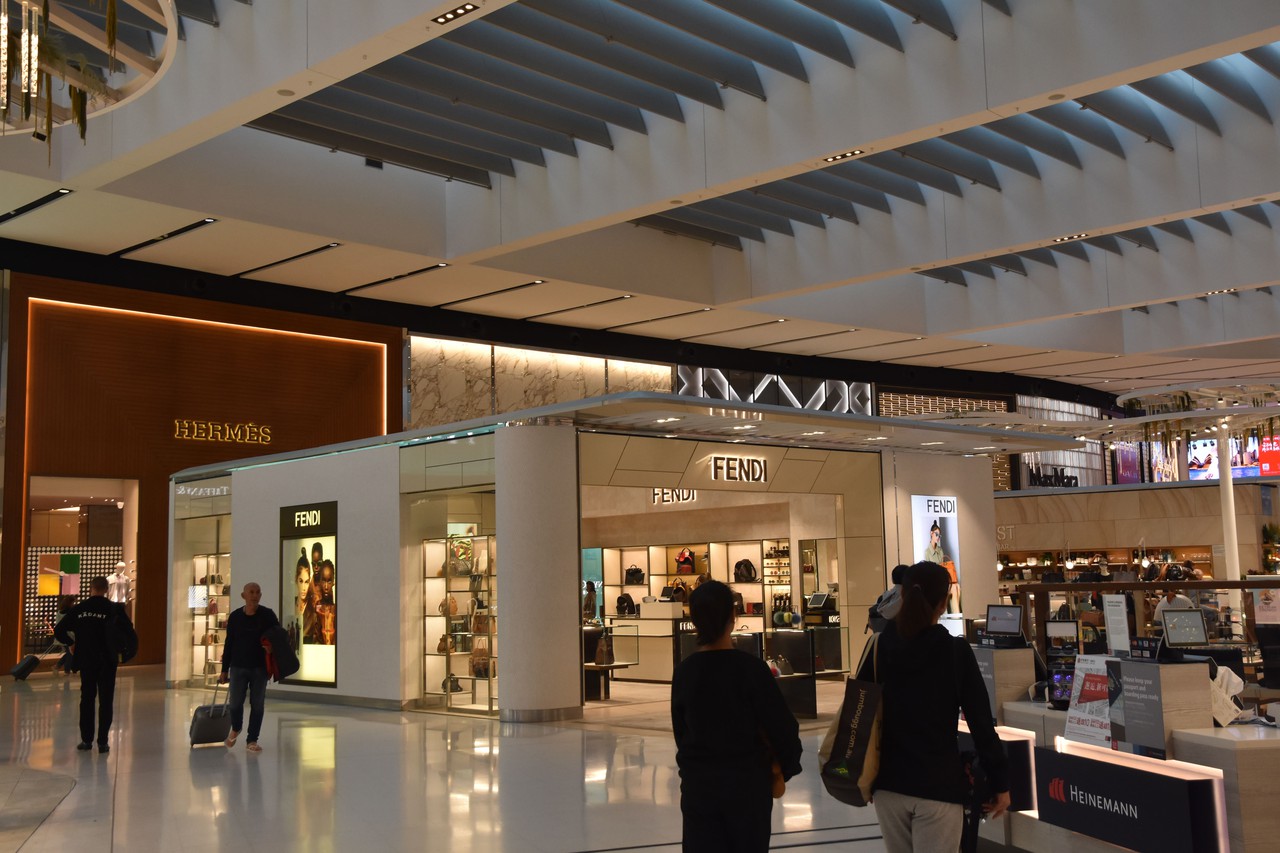 At the centre of the terminal, there’s another food court with some bars and cafés. 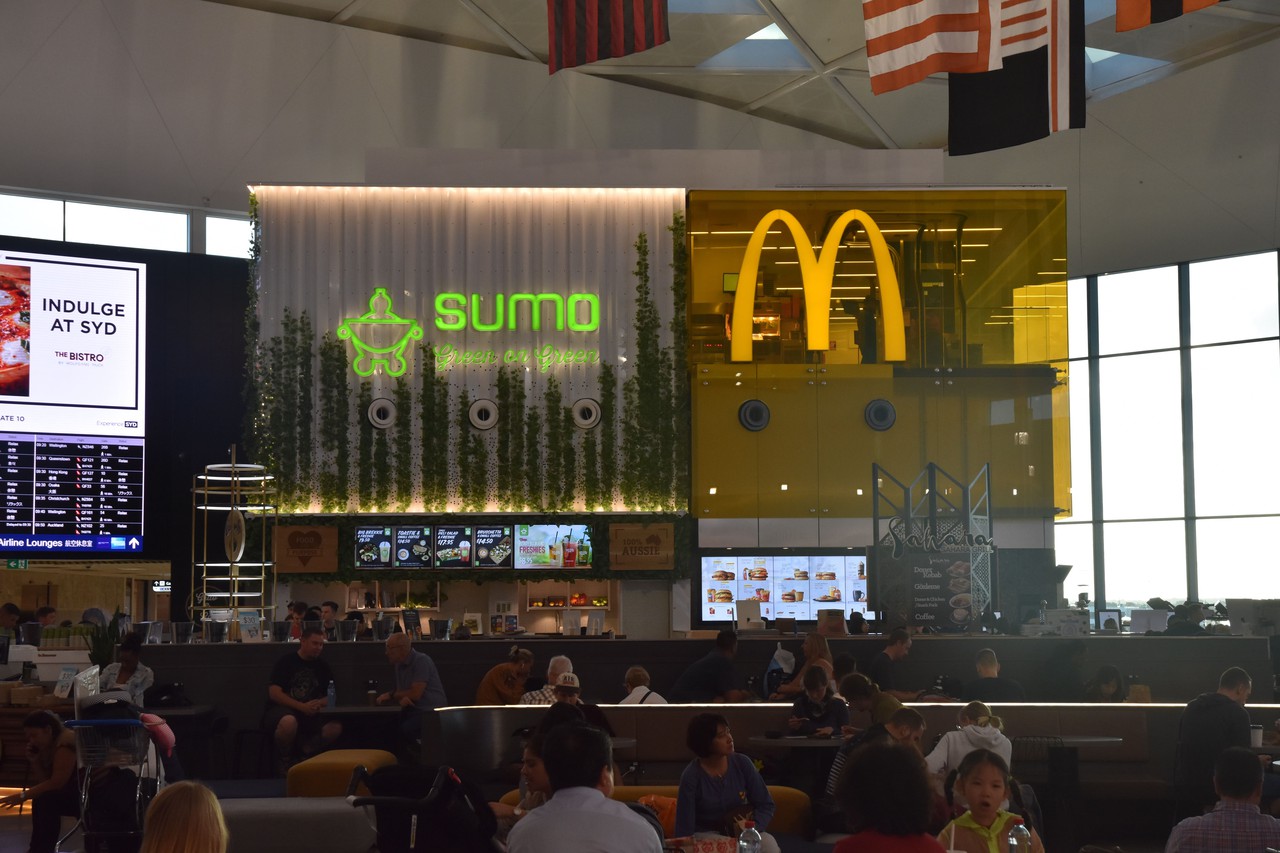 These dining areas also come with charging ports and comfortable seats, with a view to the tarmac and the runway. 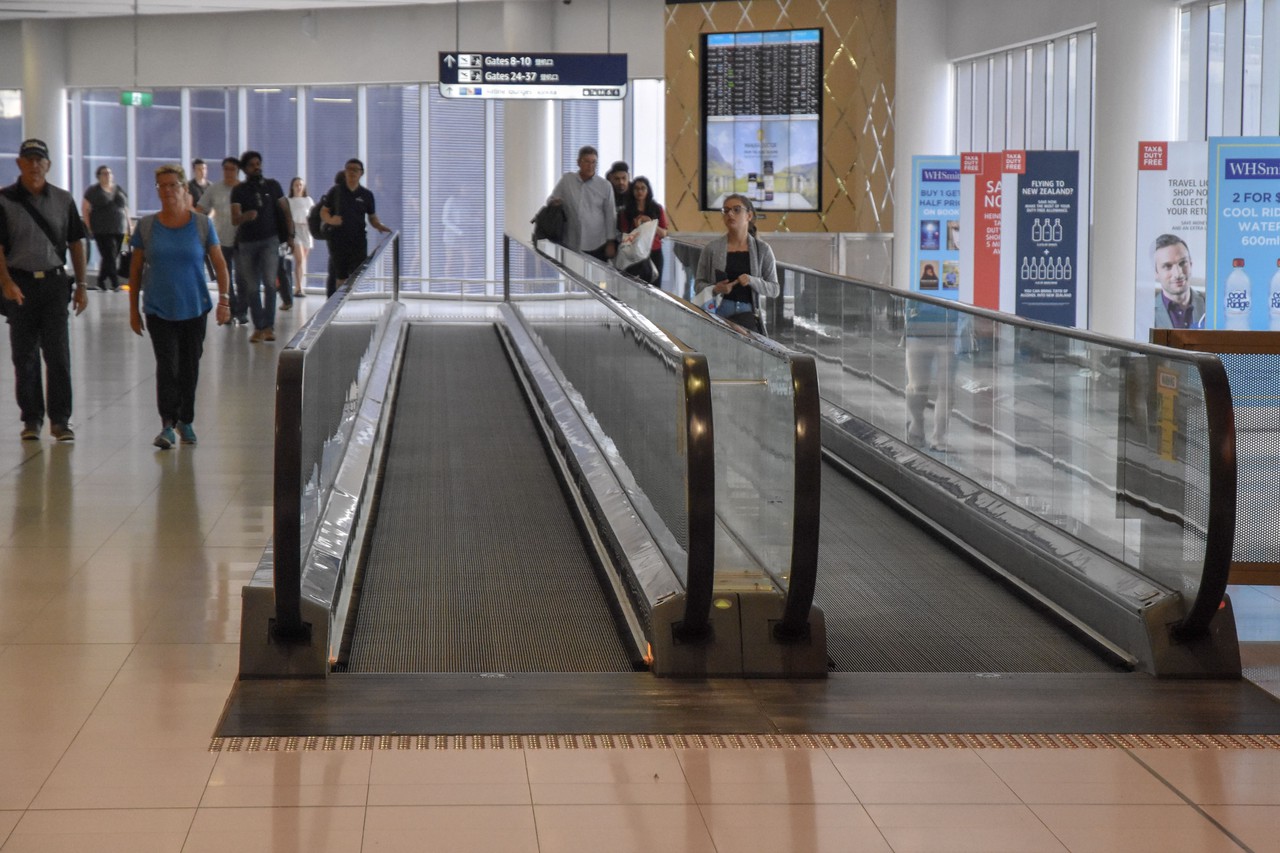 Boarding was through gate 10, just through the duty free area.

Serving the flight today was an A380, with registration VH-OQB, named ‘Hudson Fysh’. 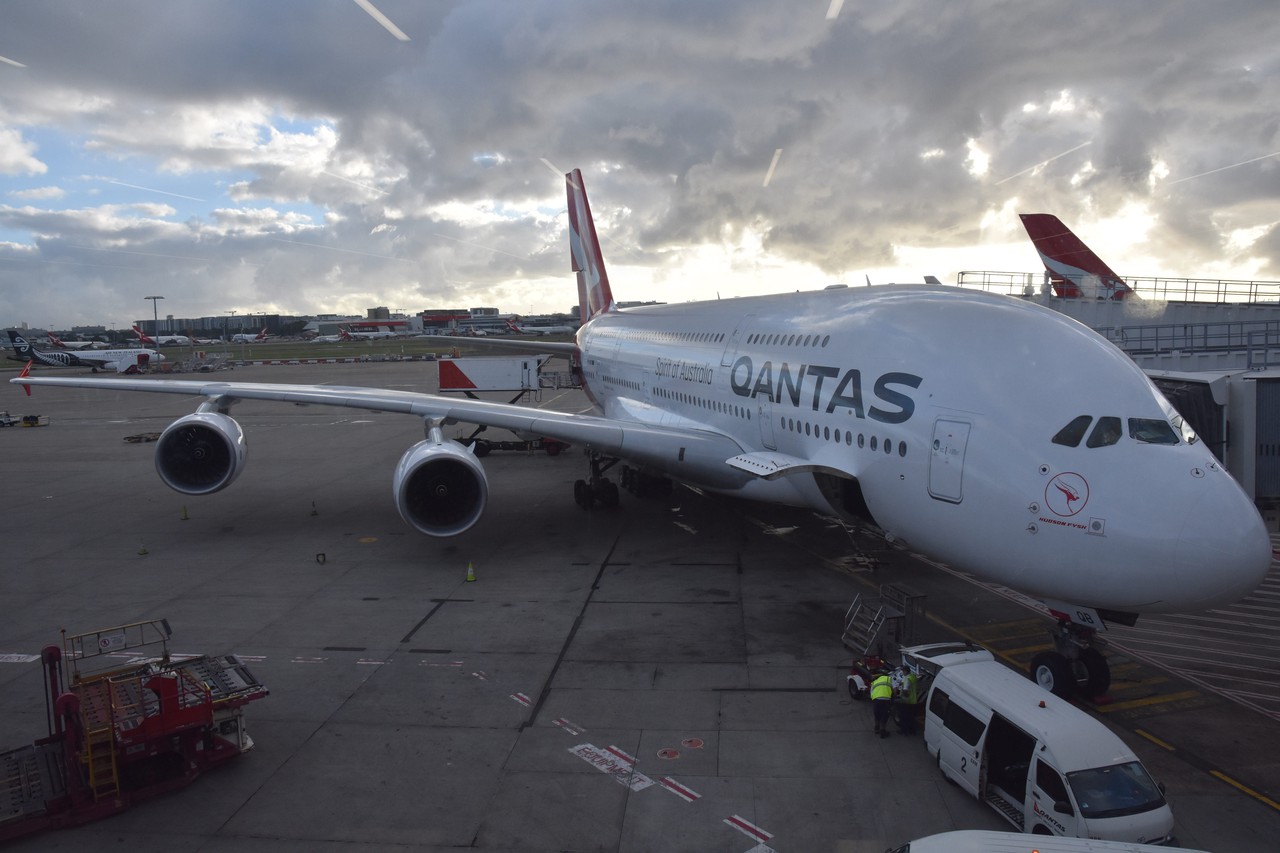 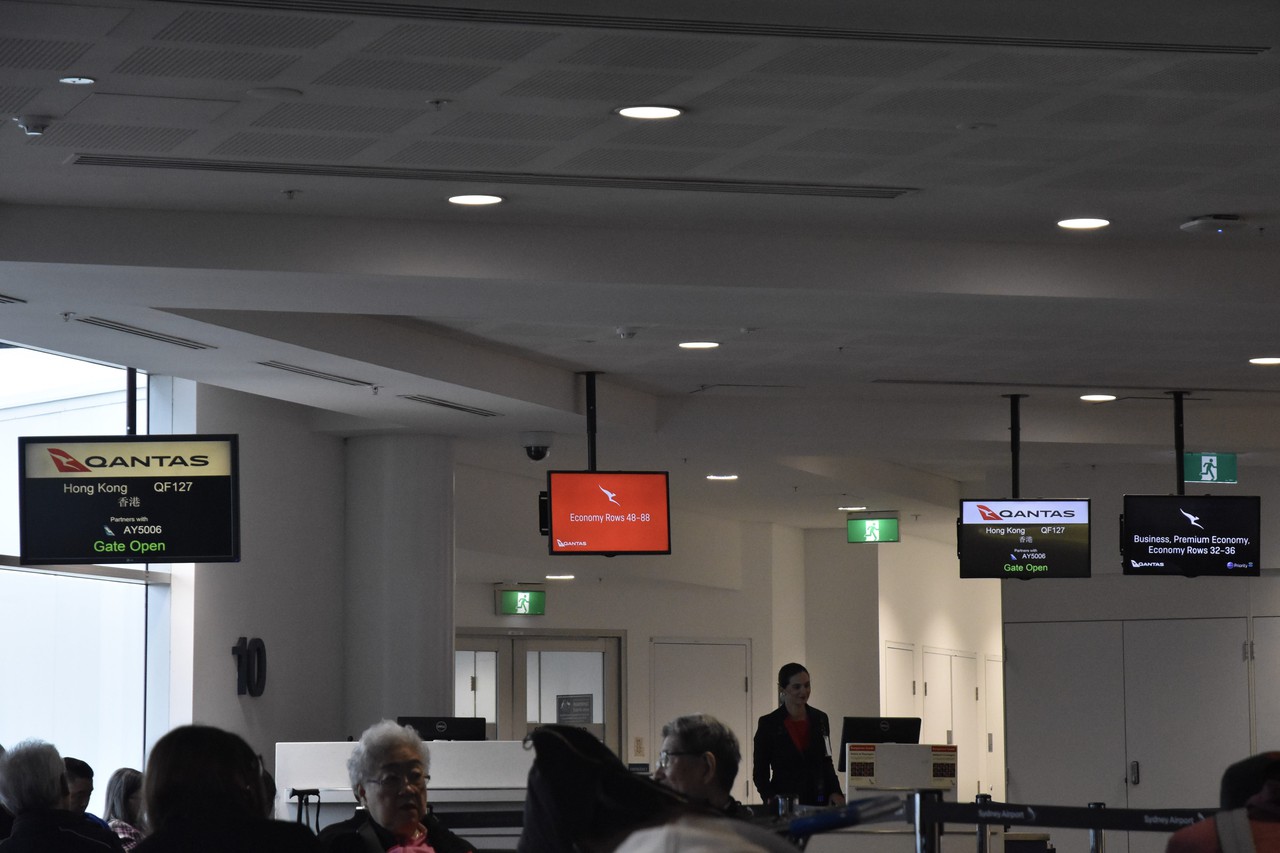 Boarding was on time and smooth and we were greeted by the crew at the main entrance of the aircraft and made my way to my seat, 33A.

And this is how small the economy cabin is: 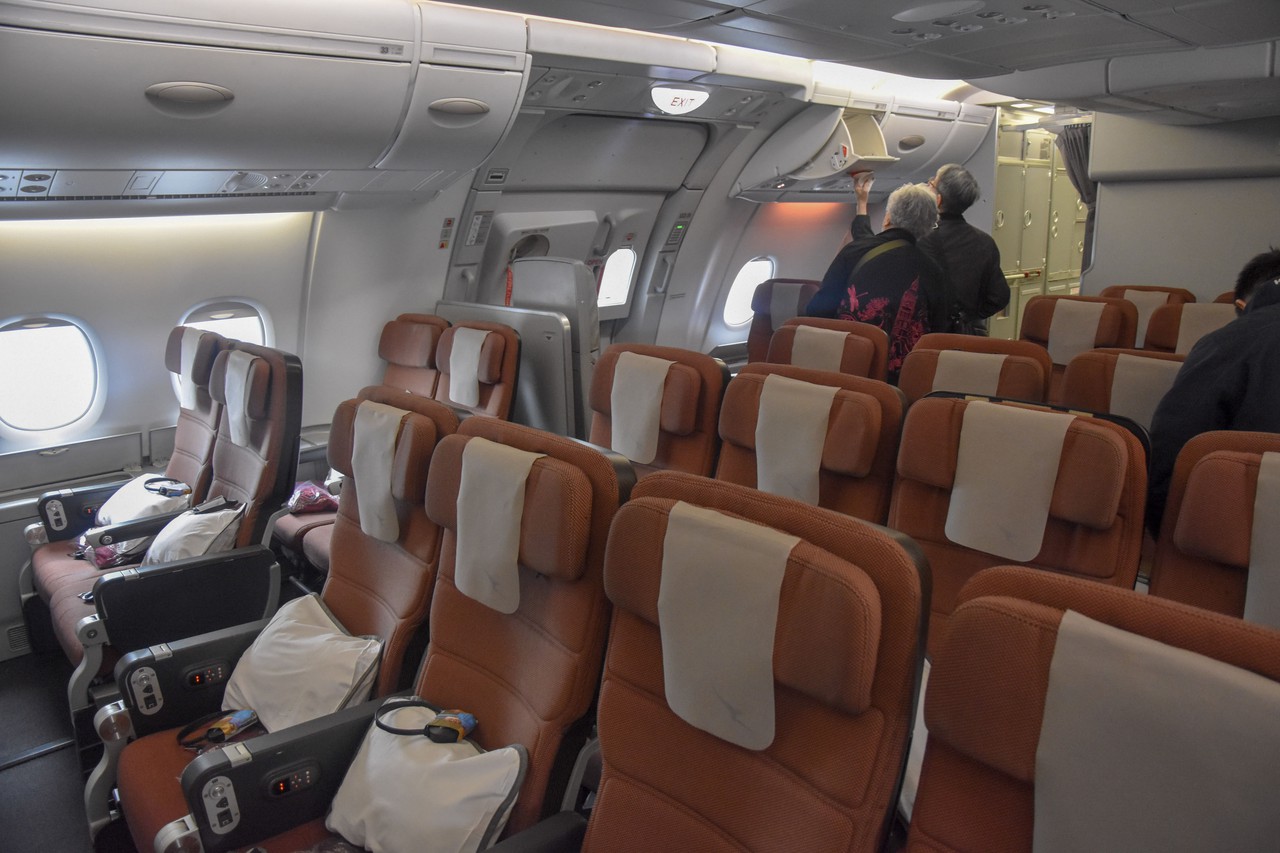 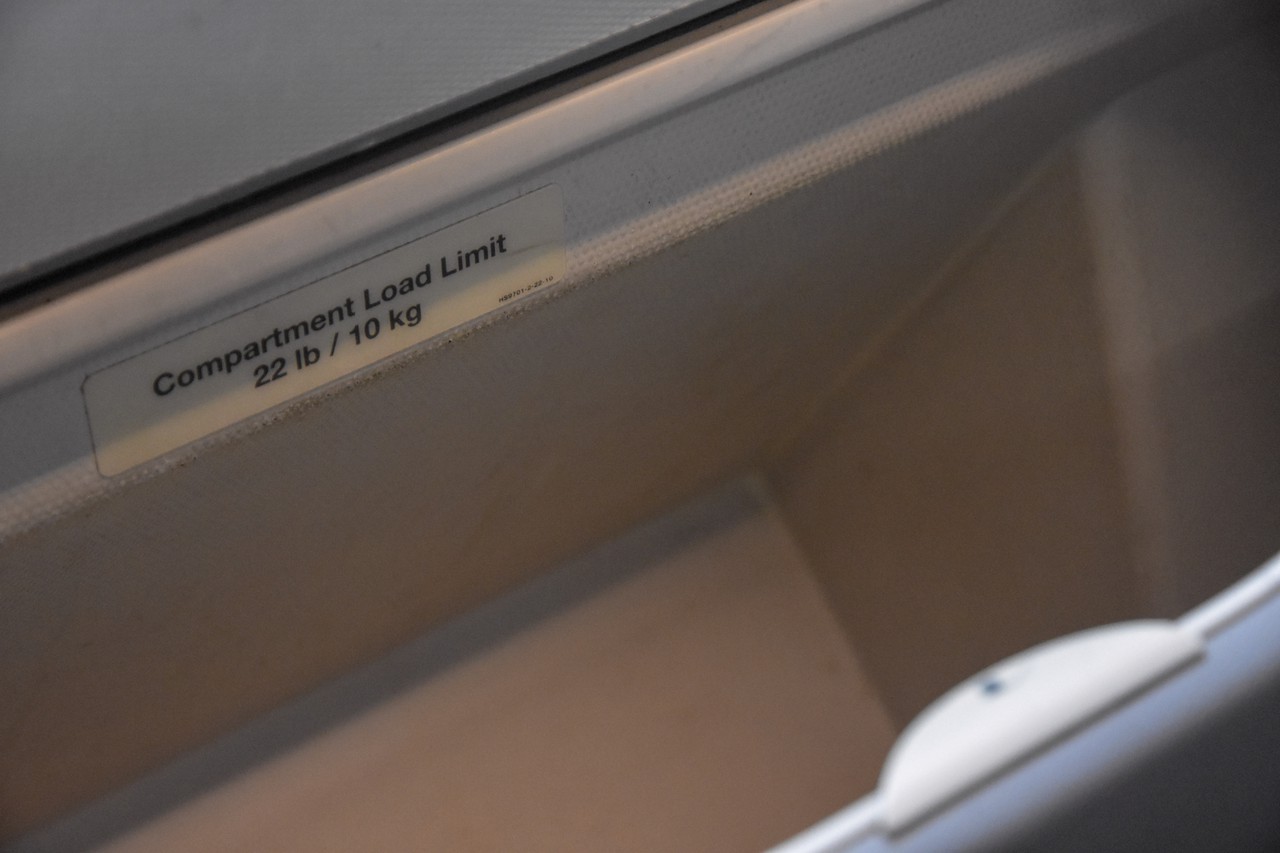 The only flaw of this seat is, in order to get a full view from the window, you have to crank your neck forward, which makes it hard for photography. 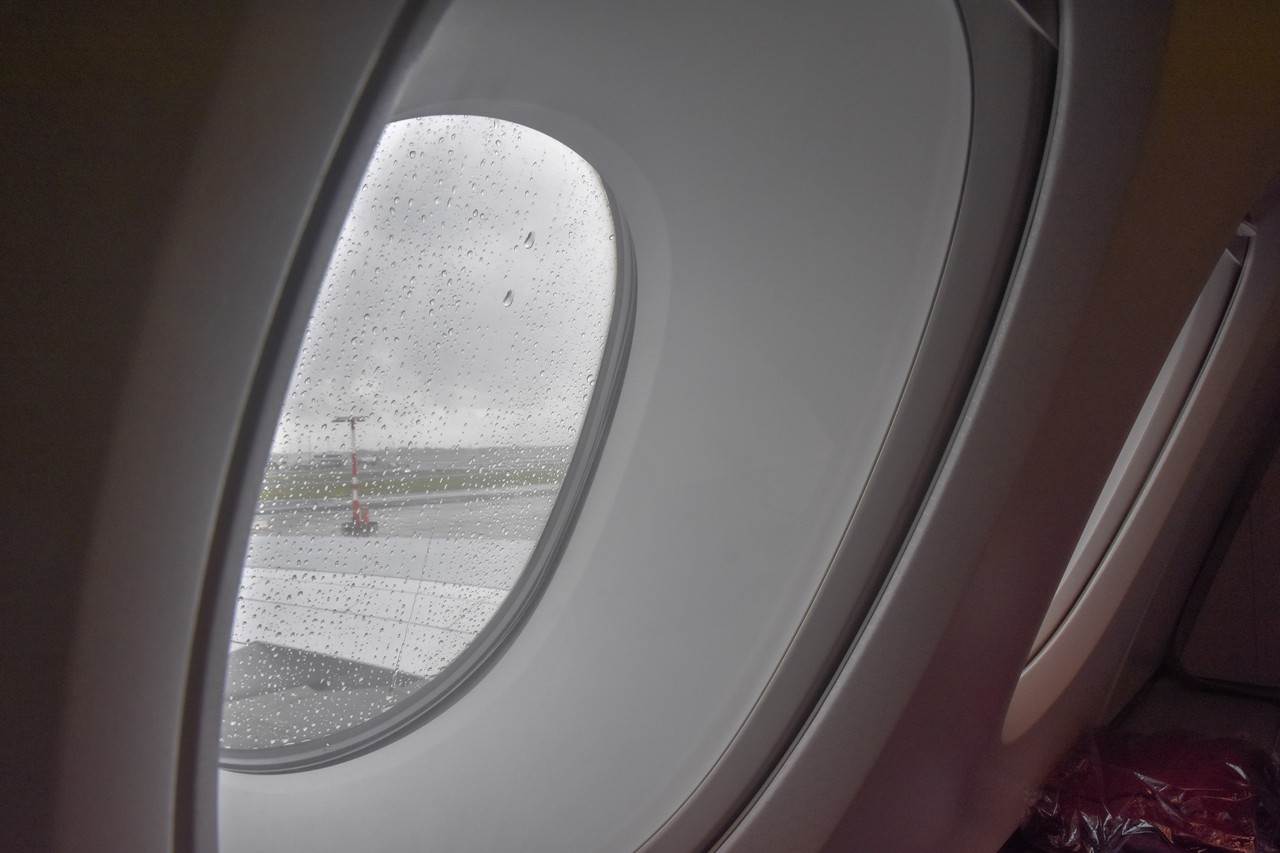 Here‘s the view out there. We were parked next to another Qantas A380. 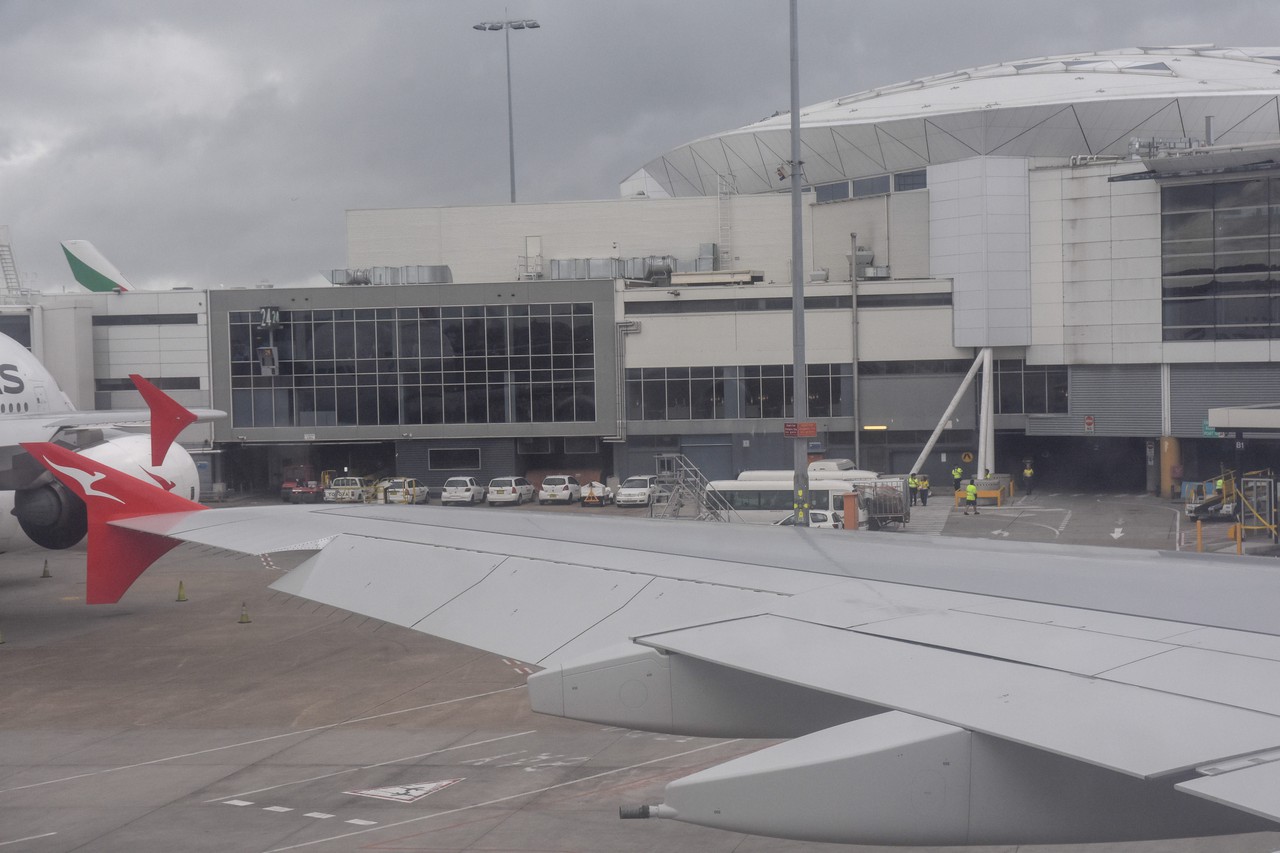 The flight meal menu was then distributed. 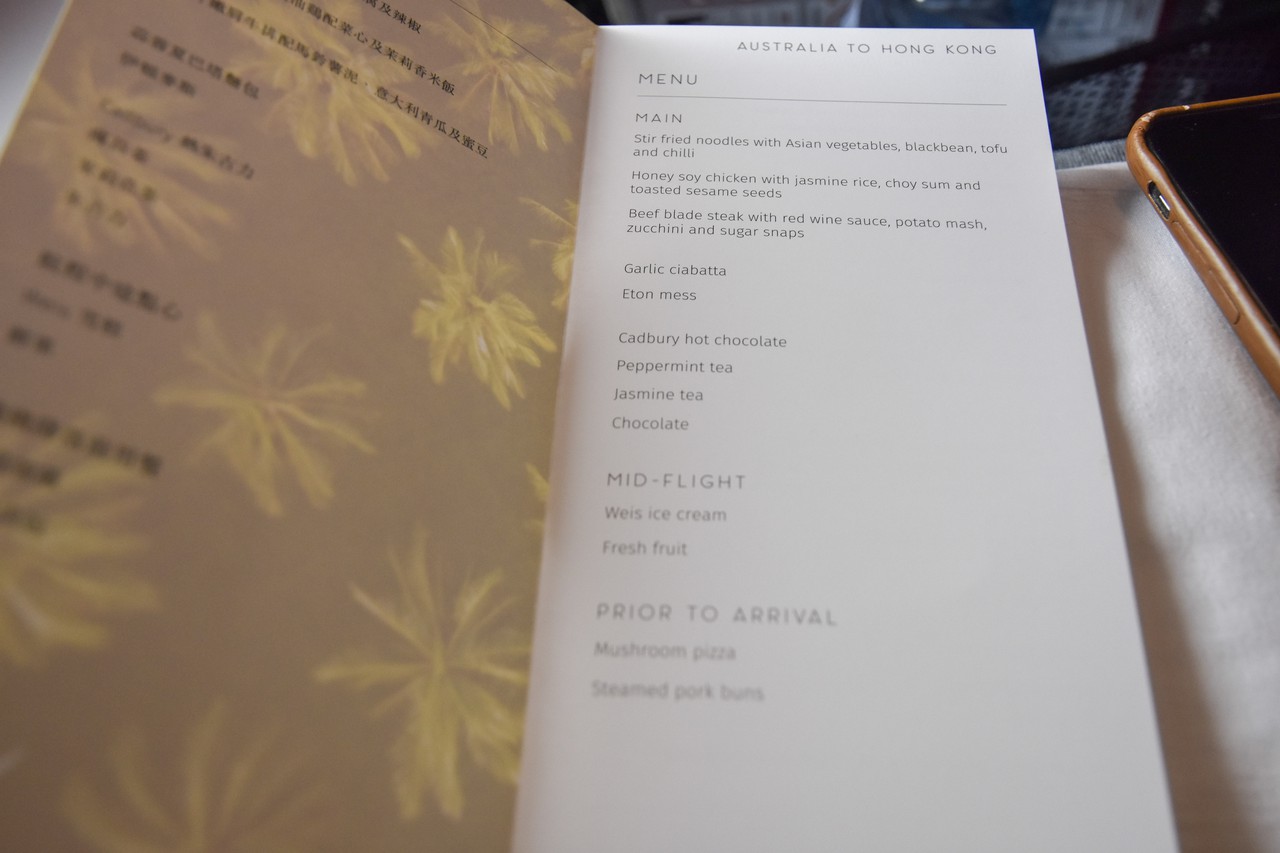 In brief, there’s a total of 2 meals. For lunch, you can choose from 1 of the 3 options: stir-fried noodles, honey soy chicken with rice and beef braised in red wine sauce. This meal also comes with a garlic bread and an eton mess.

The second meal is either a mushroom pizza or some BBQ buns.

The IFE system also features a SkyCam function, which is essentially a tail cam. 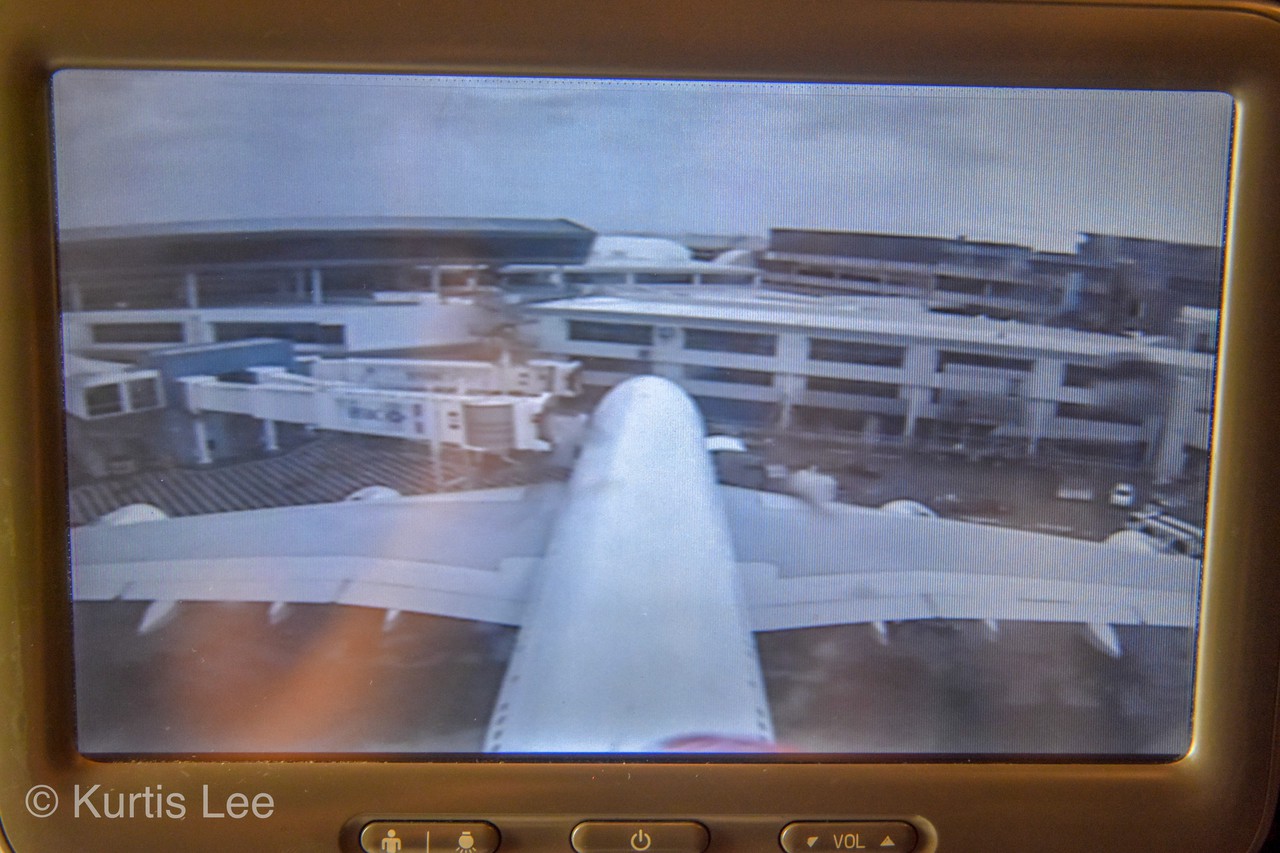 This is the flight preview for today: 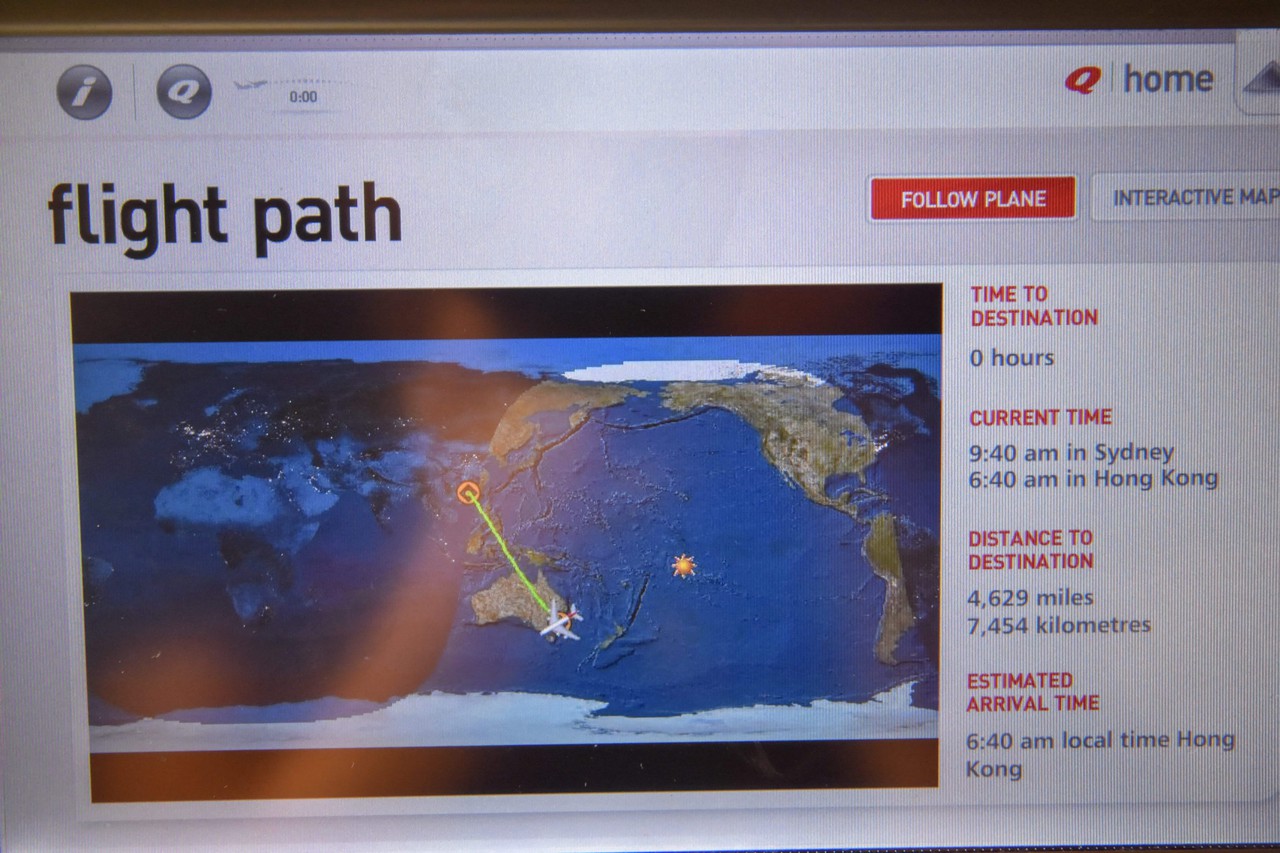 A 8 hours and 30 minutes flight covering a distance of 7450 kilometers.

We took off 15 minutes late and left cloudy Sydney as we made our way to Hong Kong. 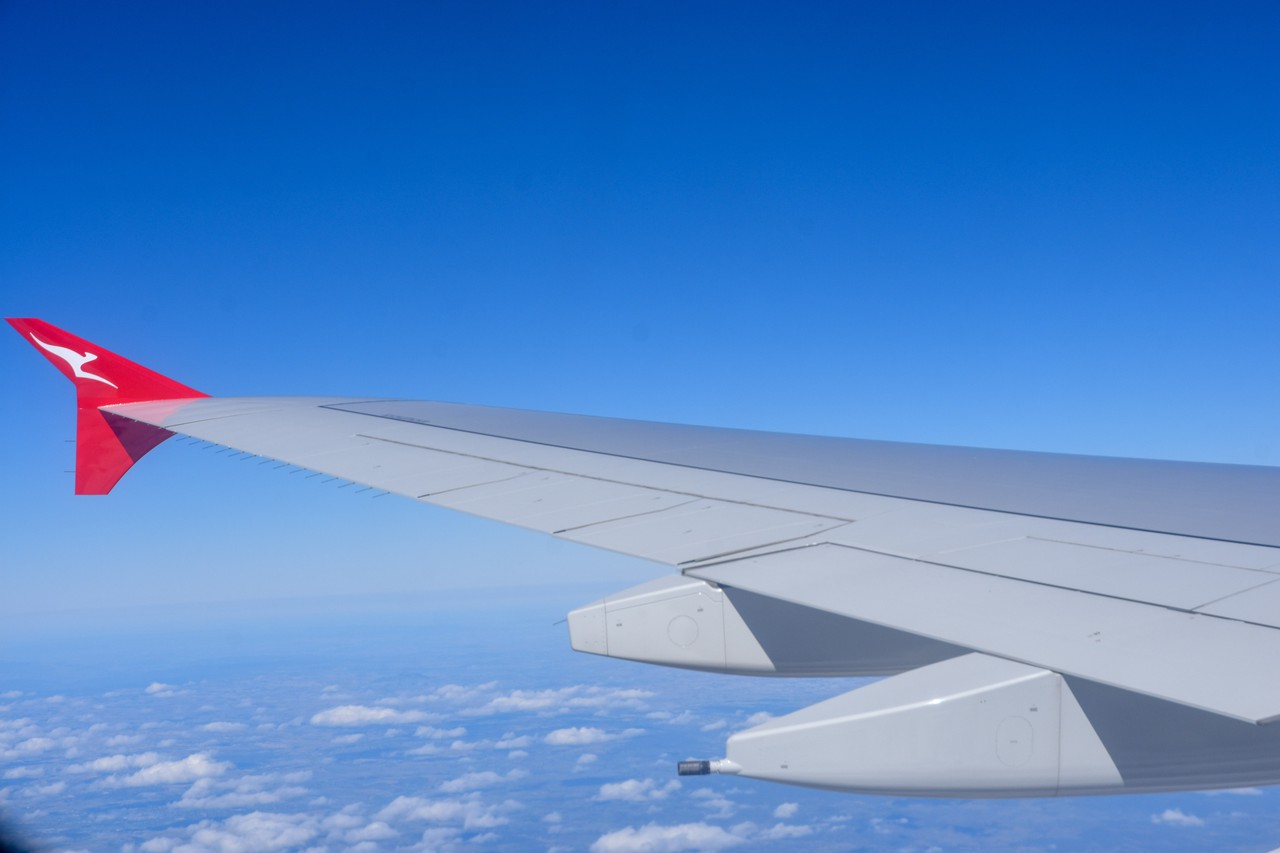 Not long after we reached the cruising altitude of 38000 feet, meal service commenced. It didn't take long for the entire economy cabin to be served as it is tiny compared to the main cabin down there. As mentioned earlier, there are 3 options to choose from. I went for the chicken and rice as I've tried it before and still love it.

The flight meal includes a garlic bread and a chocolate mousse 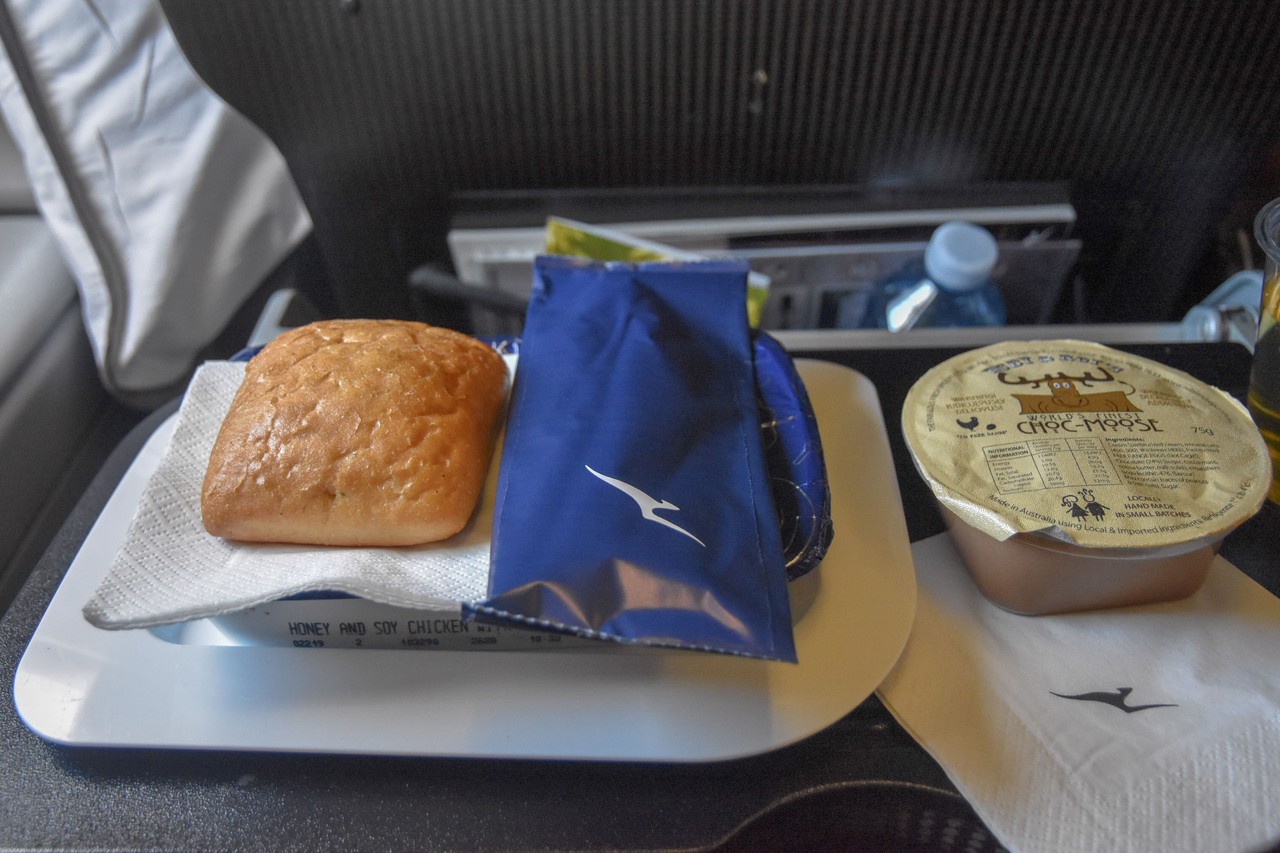 It might not look appetising, but it actually tastes good 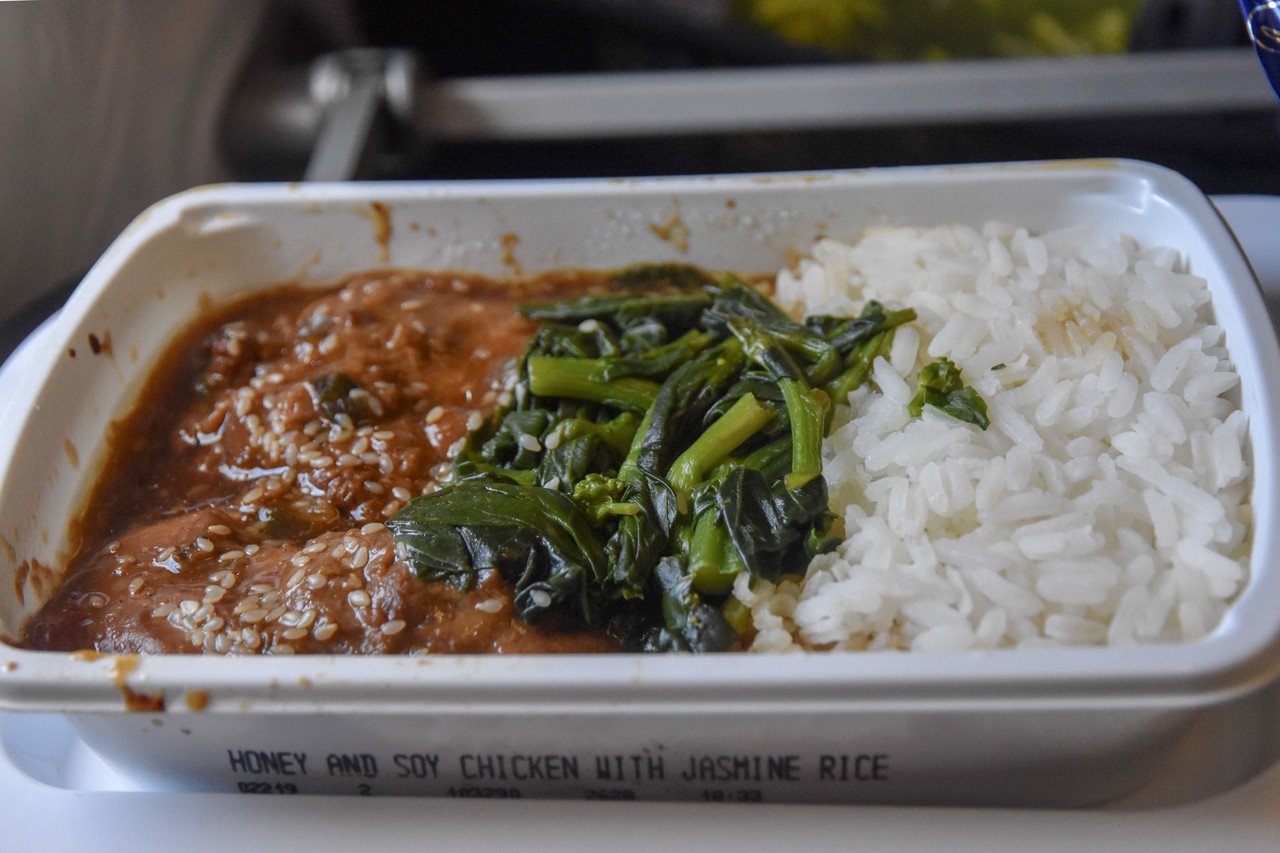 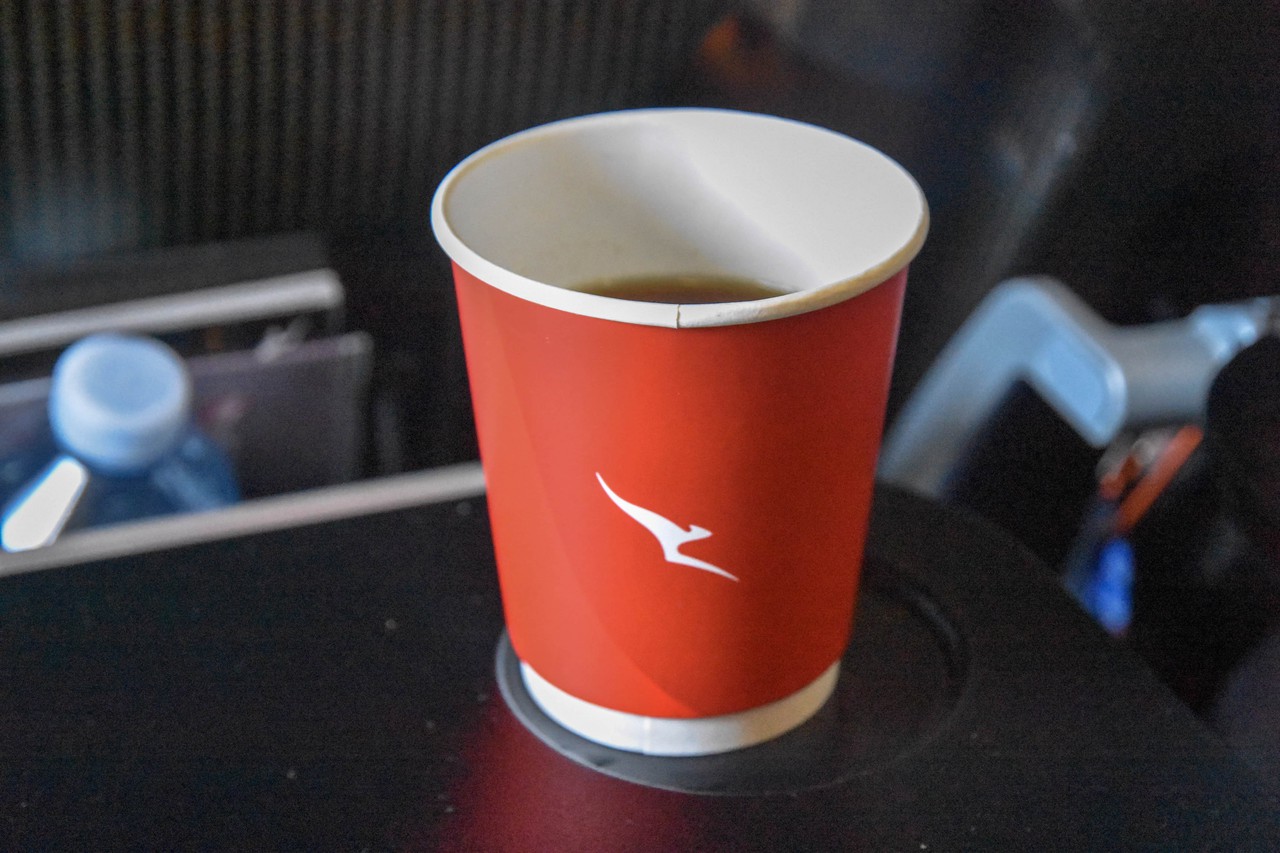 Weis ice-cream and a muesli bar were also offered, but since I eat neither of them, there’s no photos of them.

The cabin lights were then dimmed for the next few hours, until the next meal was served.

The second meal was then served 2 hours prior to landing. You can choose from a mushroom pizza and a BBQ pork bun. I went for the pizza and it tasted like it’s baked straight out from the oven. 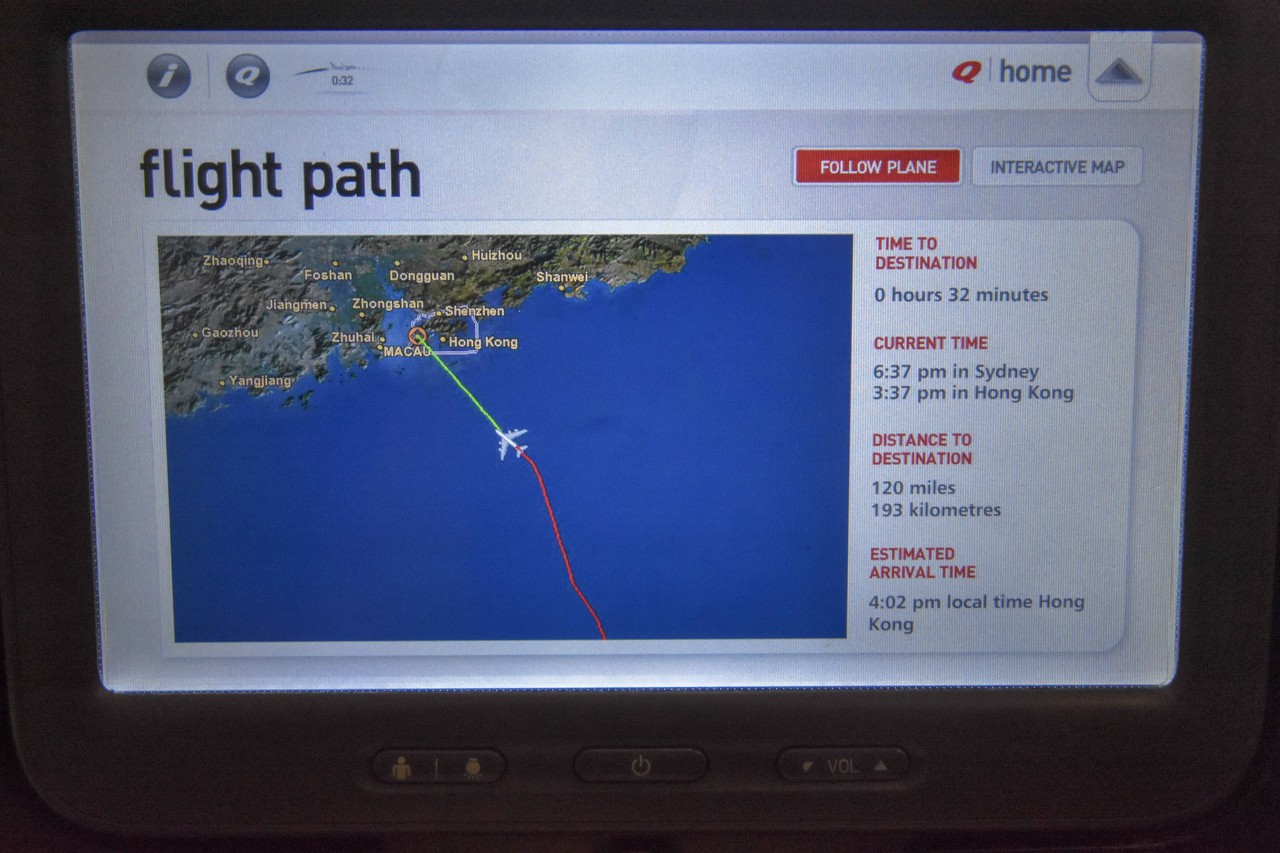 We were then told by the air traffic control that we will be landing 20 minutes later than the scheduled time due to huge amount of traffic and we made a few holding patterns above South China Sea. 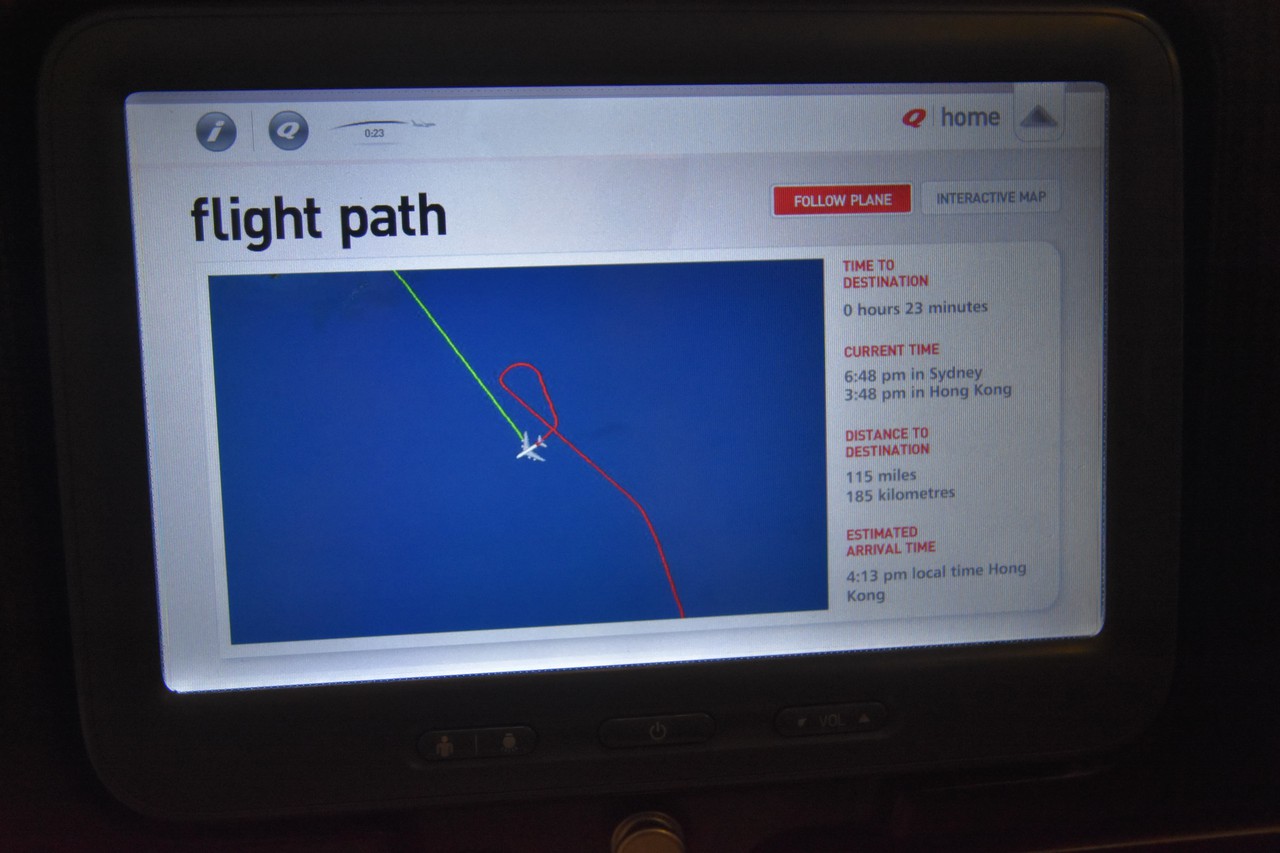 The descend into Hong Kong was quite turbulent as we passed through thick clouds. 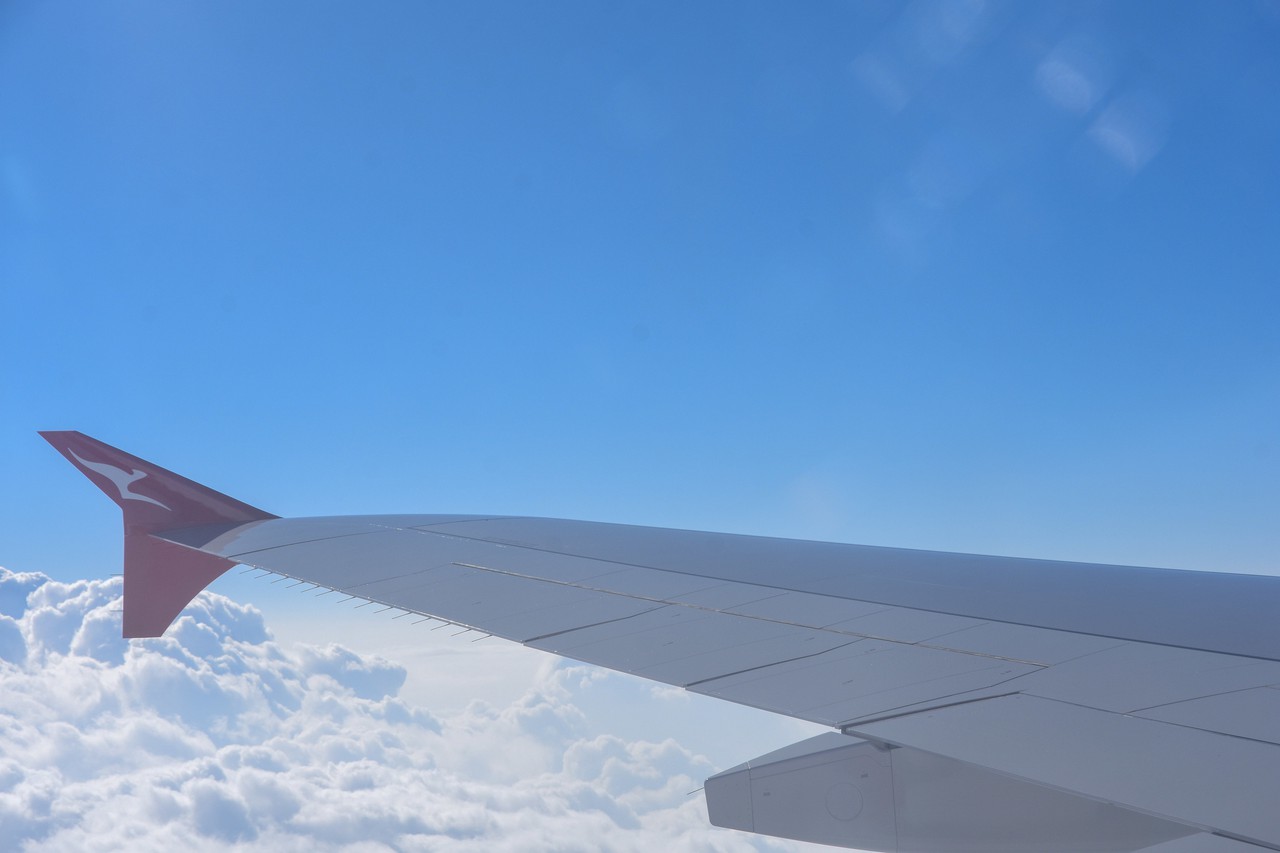 As we reached 13000 feet, we started descending through thick layers of clouds until we reached 1500 feet, which made it exciting due to the continuous turbulence.

We finally landed in Hong Kong at 16:15, 25 minute later than our STA, in a rainy and cold weather 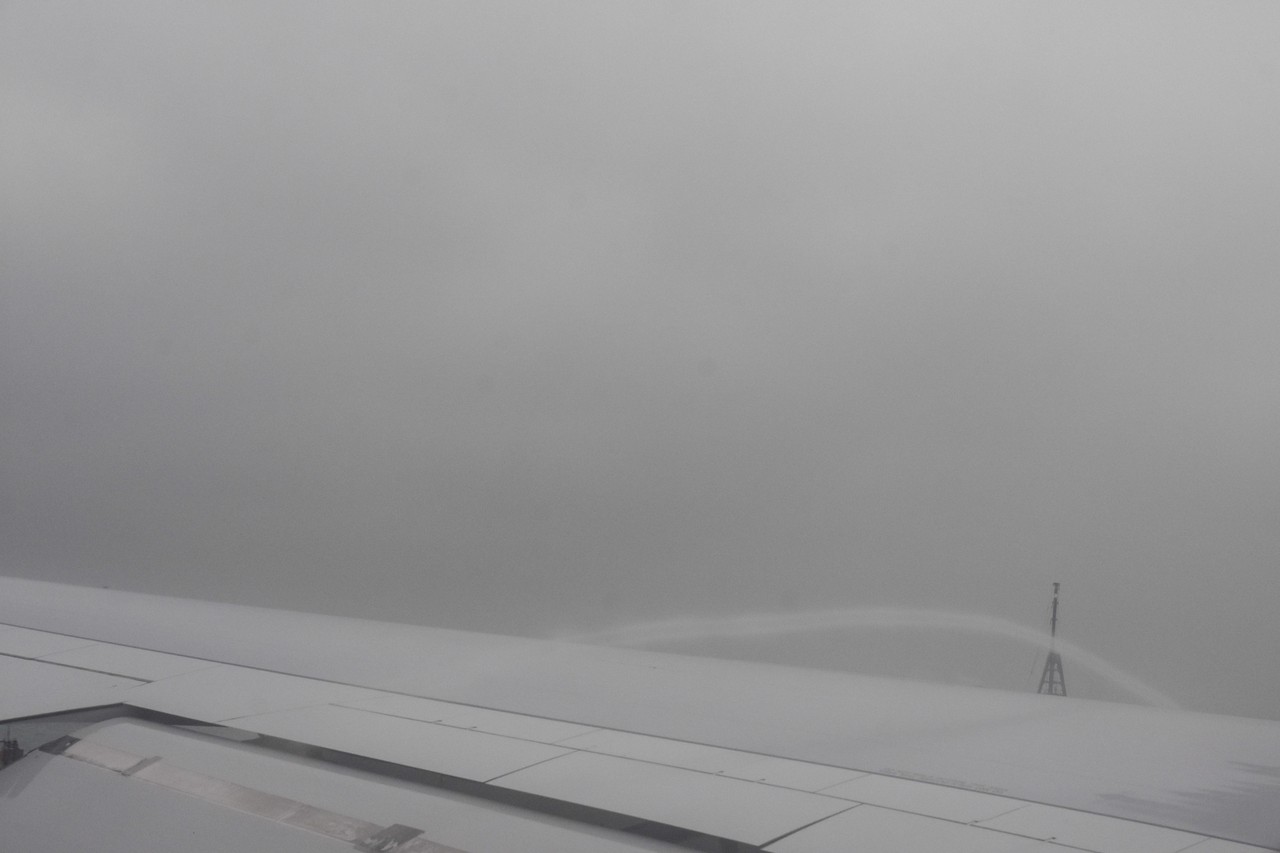 It definitely wasn’t a good weather for planespotting, but still worth taking a few shots 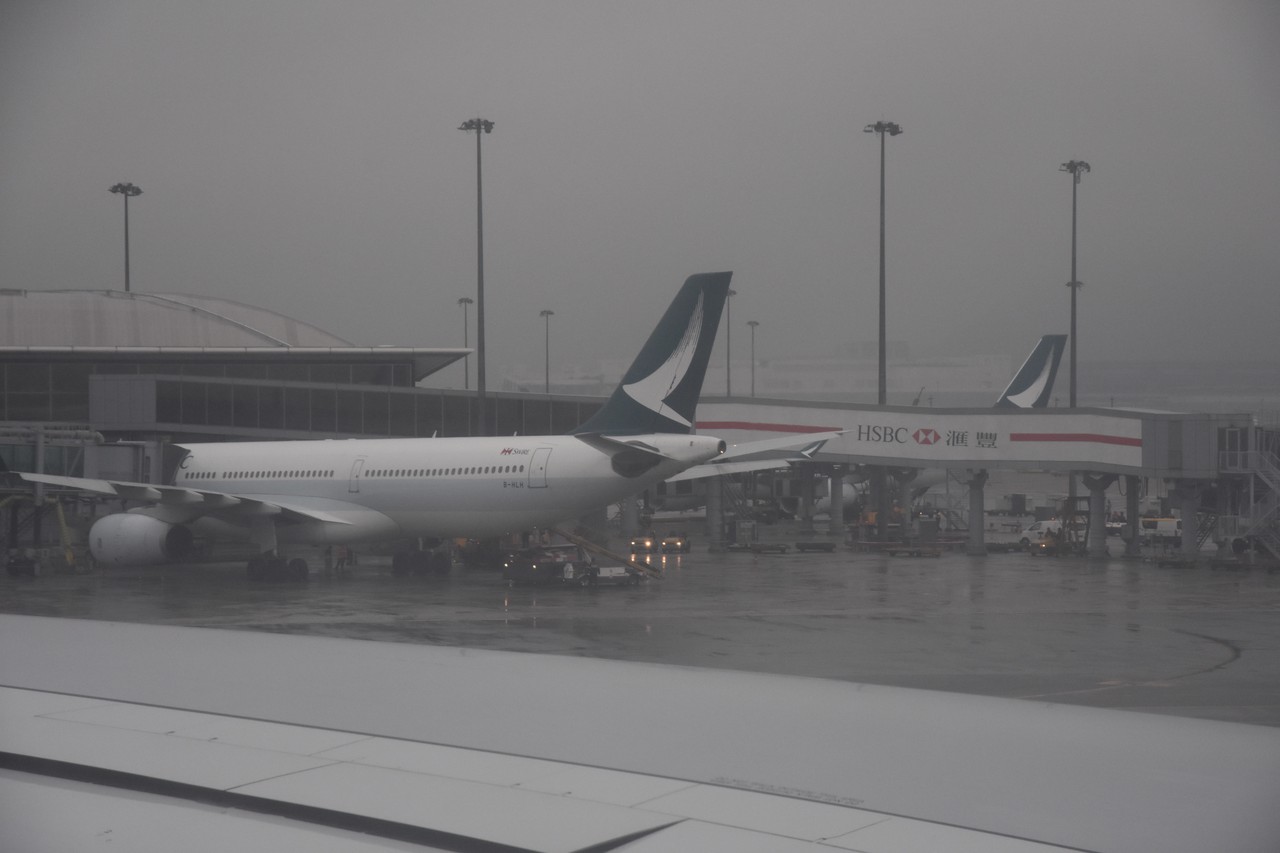 We then collected our bags at carousel 4. It was quite a long wait for many of us, probably because of the number of bags that the A380 carried.

It was generally an enjoyable flight but the strong A/C made me cold the entire flight. Entertainment was also very good as there is a wide range of movies available, making the hours passing through relatively quickly. Other than that, I reckon Qantas has done a good job in taking care of its customers and did their best.

The contributors of Flight-Report published 10 reviews of 3 airlines on the route Sydney (SYD) → Hong Kong (HKG).

The average flight time is 9 hours and 25 minutes.

He wrote 8 reviews about 6 airlines and 6 airports.