By AriffAzrai 505
Published on 12th March 2019
This is the flight report for our return flight from Ho Chi Minh City (Saigon) to Kuala Lumpur (KL).
The report for KL-Saigon can be retrieved here: AK524: KUL-SGN

On the day of our departure, we woke up early to have breakfast at the hotel's cafe and prepared ourselves to check-out from the hotel. After that, we waited for the pre-booked transportation that would bring us to the airport. We were a little surprised to see a large bus that can accommodate up to 30 people greeted us at the hotel's backdoor as we thought the agency where my elder brother booked the transportation would provide us a van. The bus driver explained to us that big bus was the only mode of transport available by the agency as other vans and cars were fully booked.


A unique-looking arch in the middle of Saigon's busy street. 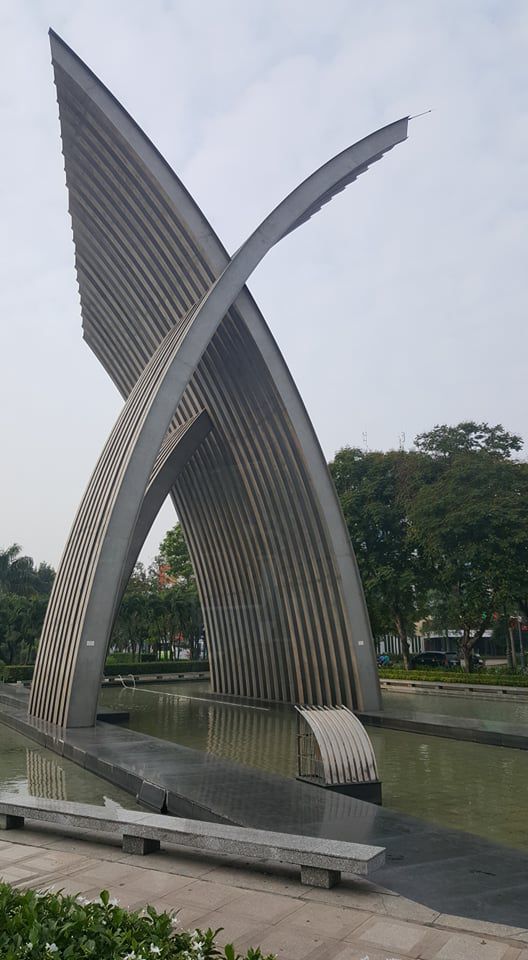 Around 20 minutes later, we arrived at Ho Chi Minh City's Tan Son Nhat International Airport. I never knew that the airport was so close to the city center. I felt the journey was extremely short compared to the distance of KLIA from KL city.


We took trolleys to carry all of our luggage and bags.


As we entered the terminal, we immediately made our way to the check-in counter to drop our checked-in luggage.


AK's check-in and baggage drop counters. We didnt spend a long time at the landside. Once we were done with dropping our checked-in luggage, we went through the security and customs to get into the airside area.


Some of the duty-free items available in the airside.

We did a quick toilet stop while walking to our boarding gate, Gate 26 where there were huge windows located near the restrooms that made plane spotting session possible.

Vietnam Airlines A350 and VASCO's ATR72. 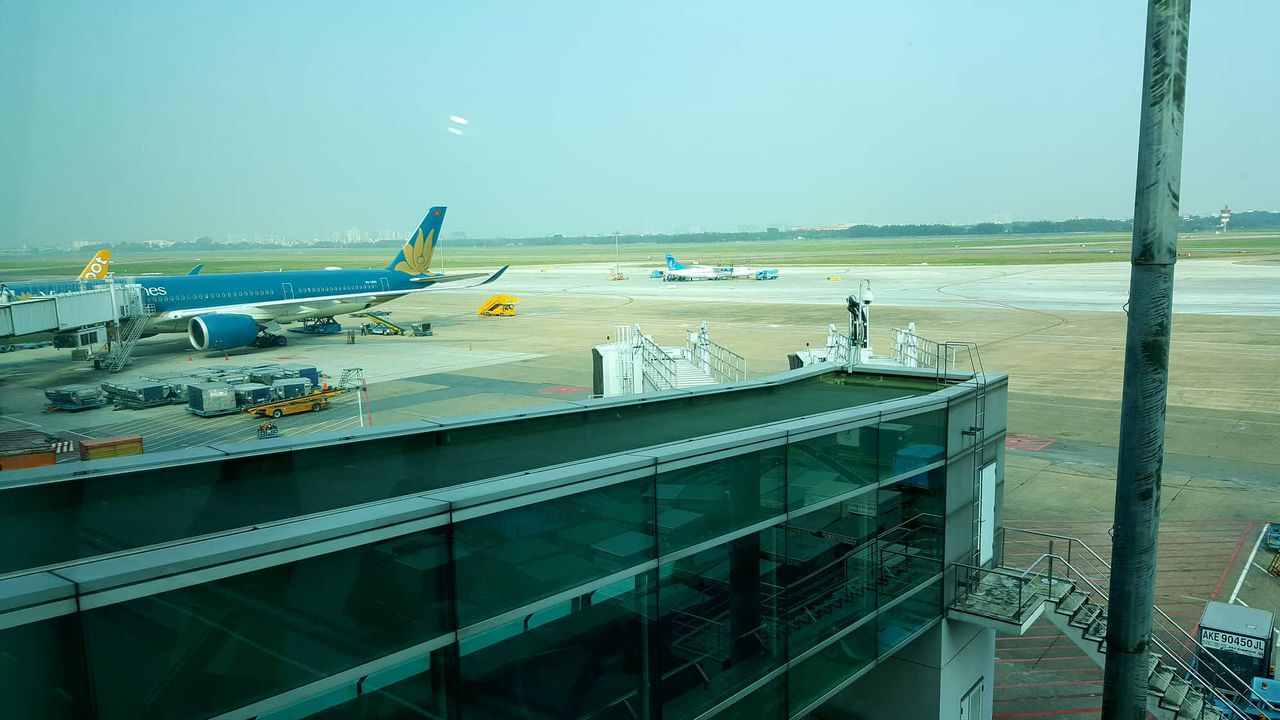 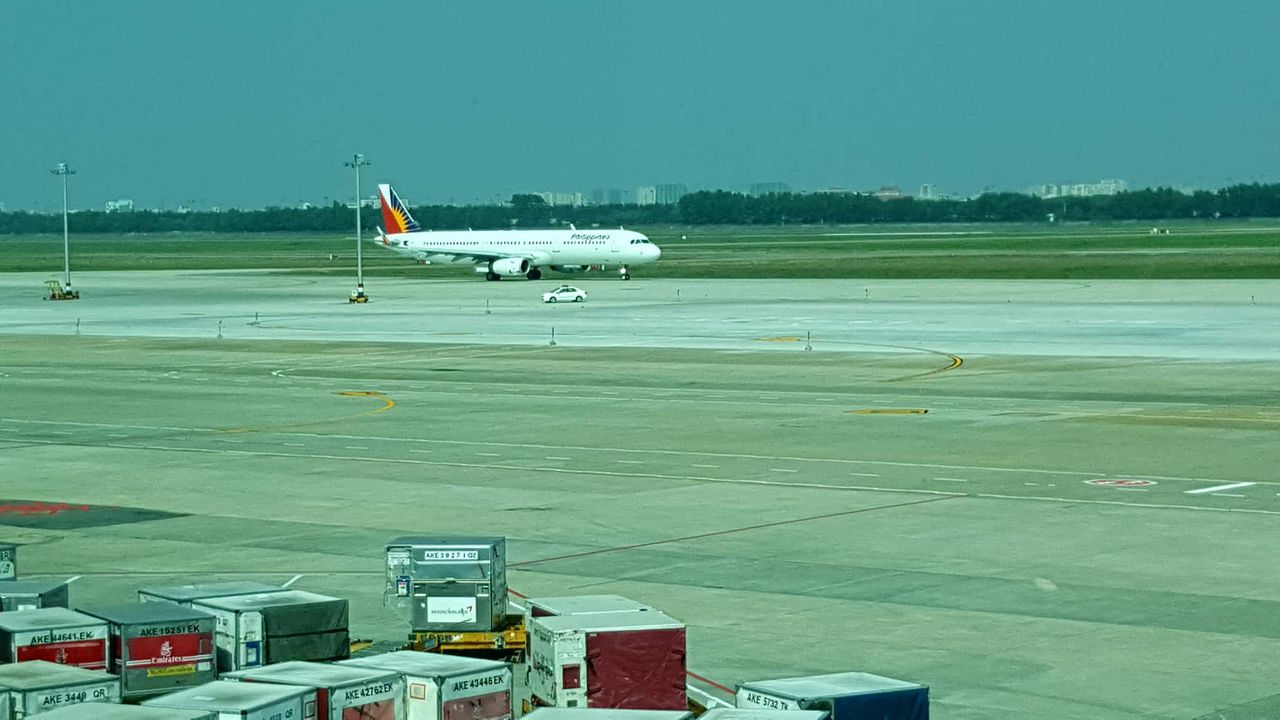 
Docked at the gate.


Next to Jetstar Pacific.


After the quick toilet break and plane spotting session, we continued walking to Gate 26 and when we reached there, we found that most of other passengers were already there. We managed to find some empty seats for our family and waited there until the arrival of our aircraft.

It was already passed 11am, but there was still no sign for the arrival of our aircraft. We expected that our flight would experience some delay. At 11++am, our plane finally arrived and docked at the gate. Passengers from that flight disembarked and passengers that going to KL including us were lined up and readied for boarding.

But almost 30 minutes later, the boarding process still didnt take place. To our horor, the gate agent on duty made an announcement to inform all passengers that the plane that would bring us back to KL was having a technical issue and our new departure time would be at 4pm. The agent also informed that our departure gate has been changed from Gate 26 to Gate 19. All of us then moved to Gate 19.


At Gate 19, every passengers of flight AK529 were receiving free food voucher courtesy of AK that can be redeemed in the airport's Orchid Lounge. Our family and most of other passengers went to the Orchid Lounge to redeem our free meals. There was a long queue before the order counter and the lounge was so packed with most of the dining tables were already occupied. We thought that we will be served buffet-style of meals, but instead each of us was only allowed to redeem 1 ala-carte meal and a beverage offered in the menu. Luckily for us as Muslim travelers that Halal meal options were also available. At this time, I was so tired and my mobile phone's battery was almost empty (yeap, I took all my flight report photos using mobile phone's camera), so I really wasnt in a mood to snap any picture of the Orchid Lounge or the complimentary meals that we received. The meals were just ok and nothing to shout about, but it managed to make us feel full for the next few hours.


After we finished eating, we returned back to Gate 19 for our flight departure. From here, I can see our aircraft that having technical problem being parked at the remote stand.


With limited number of activities available to do in that area, I tried to kill the long waiting time by doing more spotting. 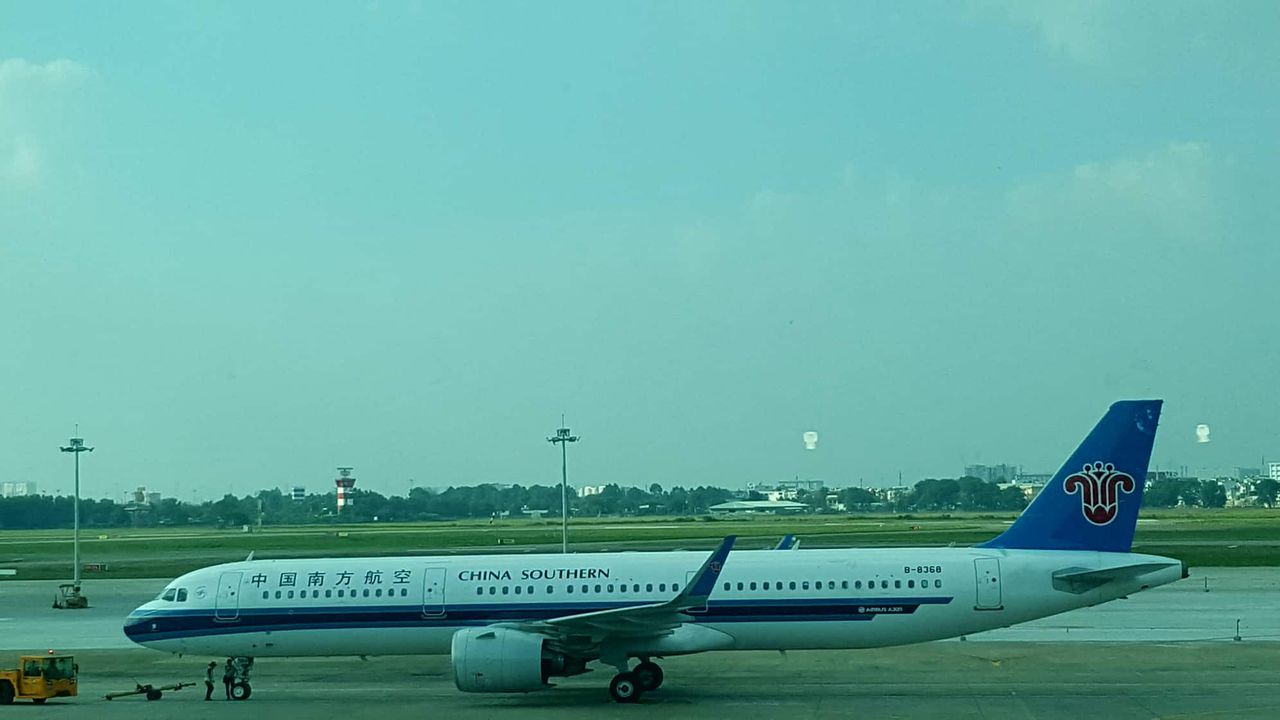 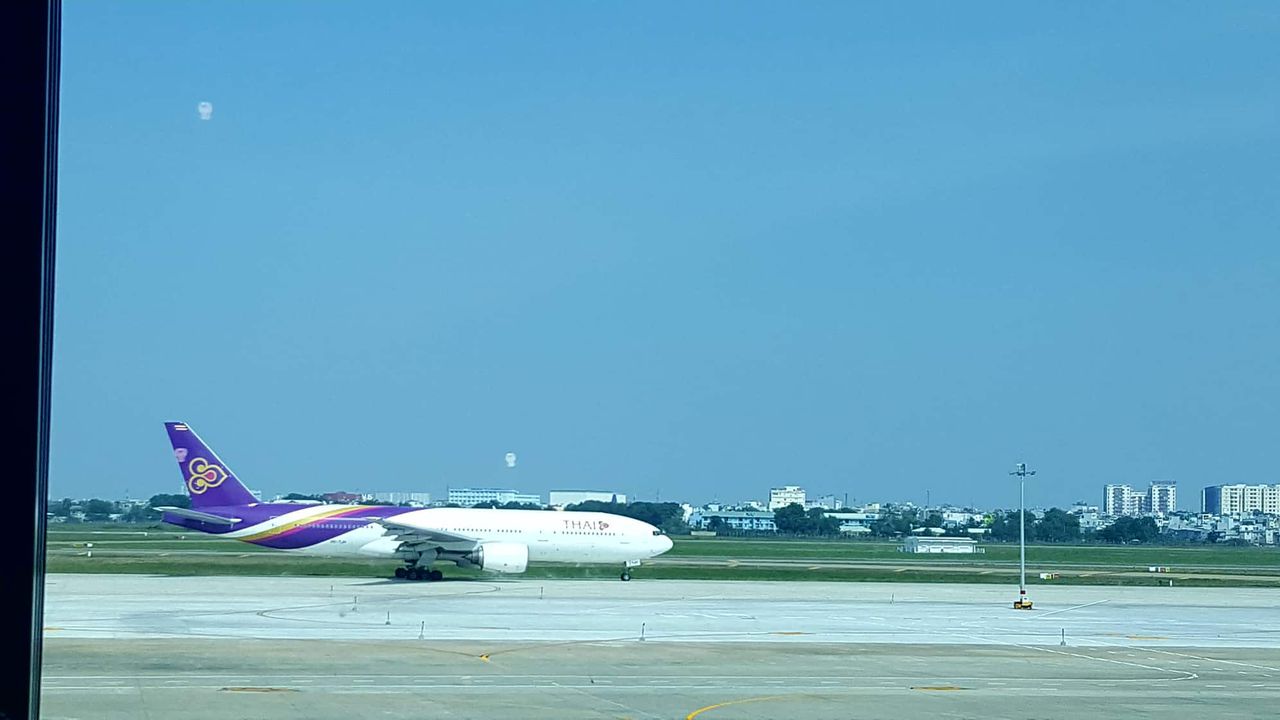 VN docked at the gate and a couple of Vietjet planes at the back. 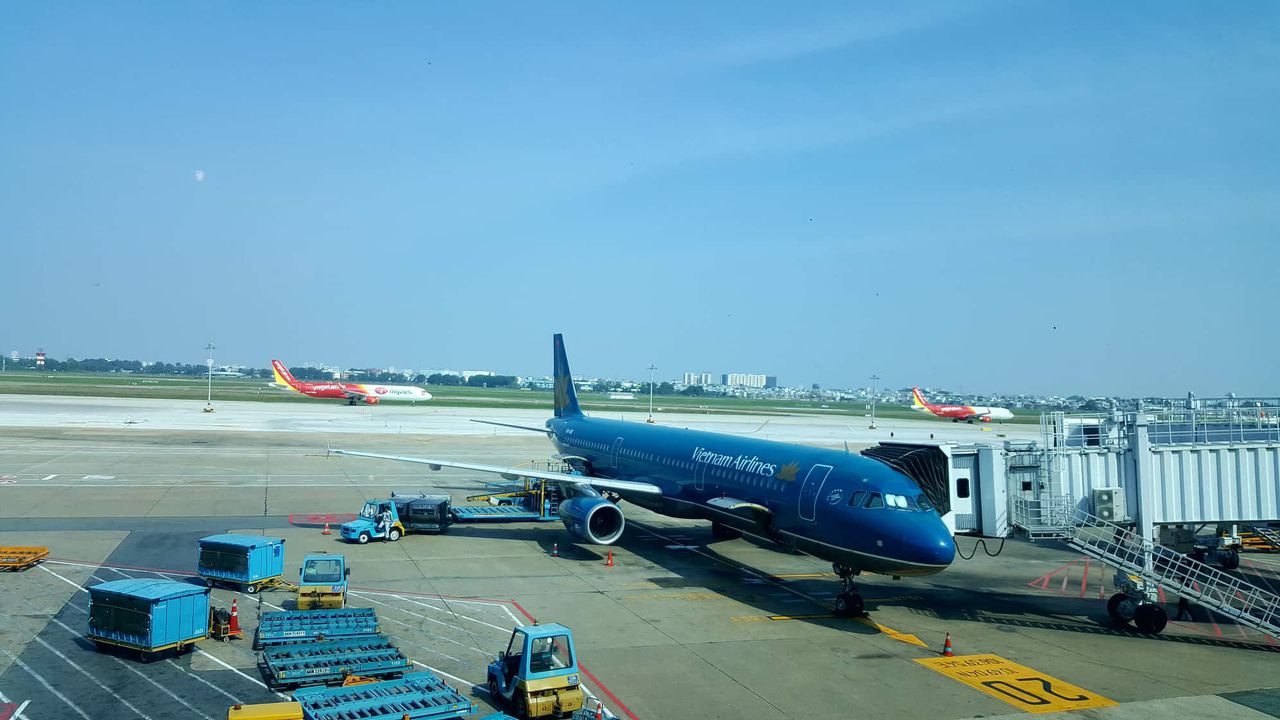 After almost 2 hours of waiting in Gate 19, the gate agent came again with another surprise announcement. This time, the agent told us that our departure gate has been changed AGAIN to Gate 14 and our new flight time may further delayed to 5pm. I can sense the feeling of anger and disappointment among the passengers about this latest update. I totally understand their feeling and I feel pity to them and myself as well to be caught in this situation.

From Gate 19, we moved to Gate 14. We hoped and prayed really hard that Gate 14 would be the very last boarding gate for us as we had no energy left to walk and move somewhere else in the terminal.

Thanks God after 20 minutes of waiting, the gate agent announced that our aircraft's technical fault has been fixed and it was ready for boarding. 2 buses were used to transport all of us to our aircraft where we will board in a traditional way via the stairs. 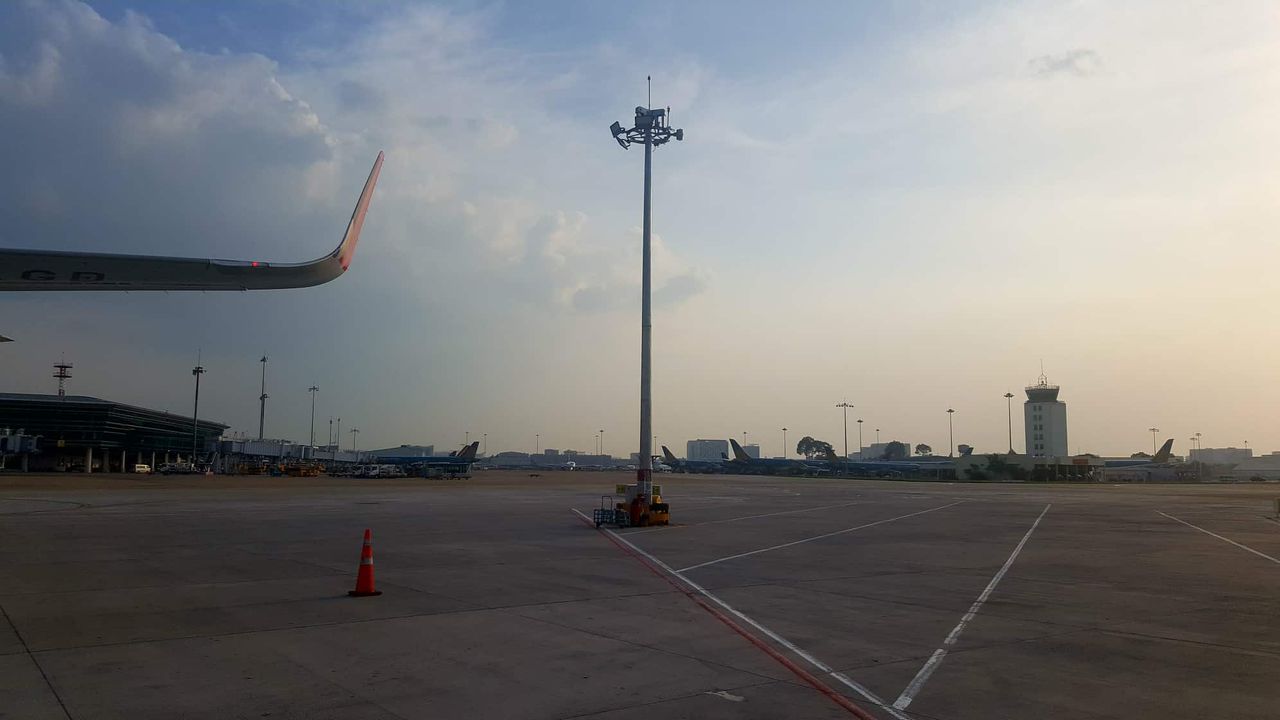 
My seat. Just like the previous flight, my seat was 1 row behind than the rest of my family members' seats.


The view of our plane's wing and Tan Son Naht Airport terminal.


More group of passengers from the next bus entering the aircraft.


The boarding session lasted pretty quick and once done, I was quite shock to see few empty seats remained as I thought it was going to be a full flight. Obviously some passengers had decided to book themselves into another flights that departed earlier than ours.


Once the door was closed, the safety demo was performed by the crew and our aircraft pushed back and taxied to the active runway for takeoff. Finally, our aircraft really left the ground at 5:35pm.

The takeoff was really smooth and around 10 minutes in the air, the inflight service started beginning with the distribution of pre-booked meals, followed by the regular BOB and inflight sales.


Initially, my brother had booked the same Roast Chicken with Pesto Sauce for me like the previous flight, but 1 of my nieces agreed to exchange her Chicken Rice with my Roast Chicken. We also received complimentary Mineral Water with the pre-booked meals.


The Chicken Rice definitely tasted so much better than the Roast Chicken. I glad with my decision to do the exchange!


The remaining of the flight went uneventful and I spent the rest of the time by looking the views outside.


About to land in KUL.


Touched down in KUL.


Taxiing to our gate.


And parked at the gate.

After we cleared the immigration, we reached at the baggage carousel No 10 where we found that our luggage were among the last to be collected. 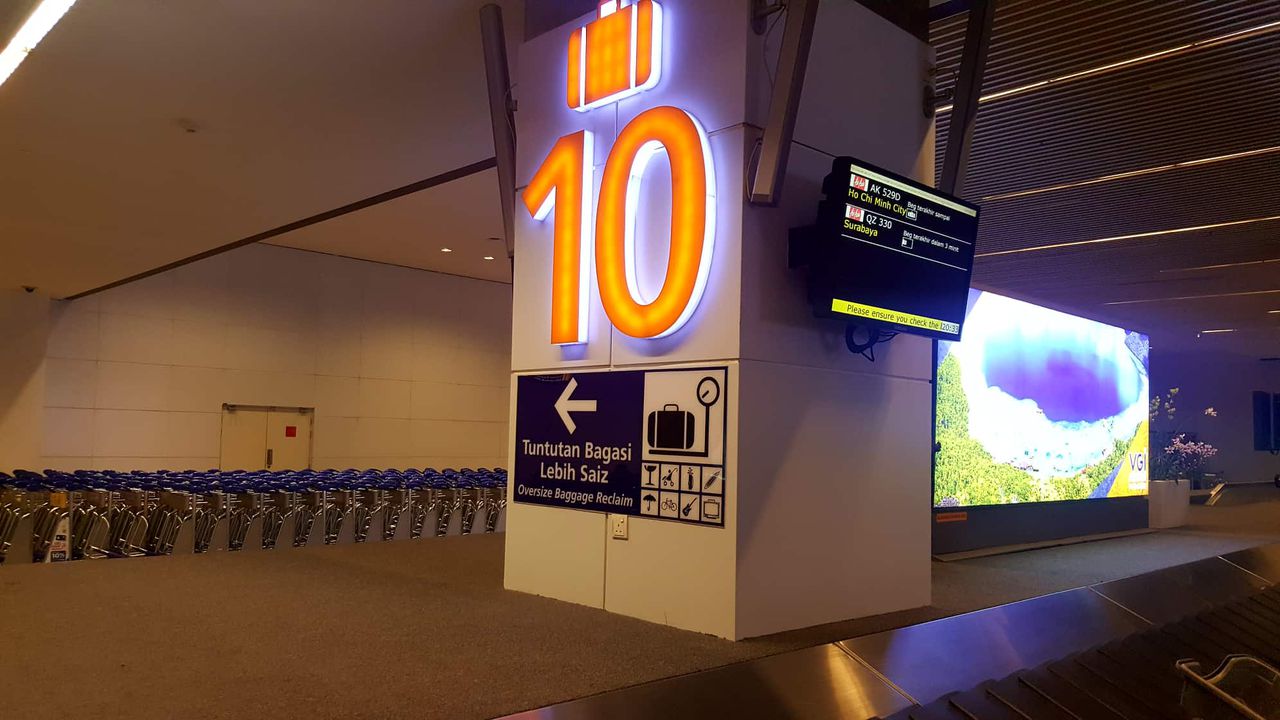 My mum and I waved goodbye to my elder brother and his family. Later, both of us went to Marrybrown for dinner before taking the Grab ride to return back to our home. We reached our house safely few minutes before midnight.


Bonus : Click here displayhide
I always take an extra leave day whenever I went to travel even sometimes that's not really necessary. The real purpose for the 1 day extra leave is for myself to get some rest and fully recover from the jet lag and tiredness of the traveling, but most of the time I would use this "special" leave day to go for outing and sightseeing. This time, I decided to pay a visit to "Kuala Lumpur Craft Complex".

The KL Craft Complex is located in Jalan Conlay next to the luxurious Royale Chulan Hotel. It is considered as a 1-stop center for local and international tourists who are looking to buy authentic Malaysian-made crafts and handicrafts products such as Batik, Songket, Silverware, Copper, Crystals, Pewters, Paintings & Potteries. Most of these items are sold in the Craft Complex's main boutique and souvenir shop, the "Karyaneka".


Thie design of the craft complex is heavily inspired by the traditional Terengganu-Malay architecture.


Located within the KL Craft Complex compound is the Craft Village where visitors can have a hands-on experience such as Batik Painting and Pottery Making in some of these huts.

Also located at the KL Craft Complex is this fascinating Craft Museum.


The free-entry museum provides visitors a great insight of how Malaysian traditional crafts and textiles such as the Batik Painting, Basket Weaving and Clay Potteries are made through interesting dioramas and video documentary.


There are also various Malaysian crafts products with interesting information of each of them on the exhibit.


A diorama of Basket Weaving.


Potteries made up of Clay.


A diorama of kitchen section in Malay Traditional House.

The KL Craft Complex along with the Craft Museum are 2 attractions that surely not to be missed by any travelers visiting the KL city. Even if you do not wish to buy anything, this Craft Complex is still worth to visit solely for its stunning architecture which would be great for photography!
See more

Another pleasant experience flying with Air Asia. The technical problem and long-hours of delay were really horrible and something unfortunate, but I guess the safety of all passengers should always remain priority and above all other aspects. The inflight meals onboard this flight tasted better than the previous flight while the cabin crew provided adequate service and assistance though not overly friendly. Nevertheless, it was a good flight and they managed to bring us to the ground safely ;-)