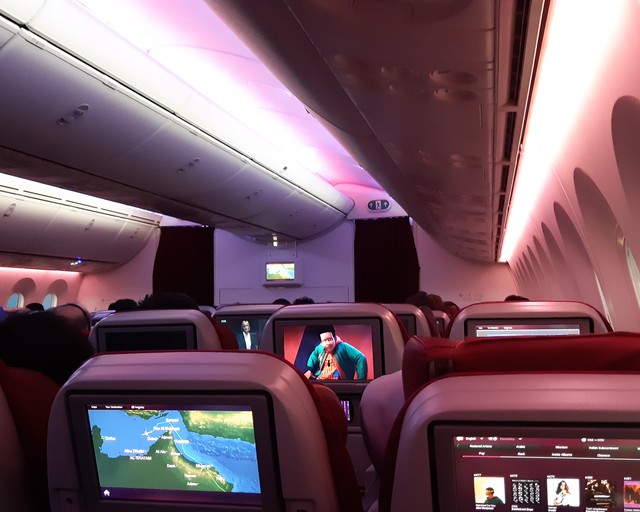 Below are the series of my flight reports, since this is the first one, the others will be coming soon, so stay tuned!

So, as not to prolong the introduction, let's proceed to the report…

To reach Soekarno-Hatta Int'l Airport from Jakarta city center, you have plenty of alternatives, from Damri buses that depart from many points (including Gambir Station, Jakarta's main train station), Railink airport train that departs from Sudirman Baru/BNI City Station (near Bundaran HI), and if you prefer more privacy for your long trip to the airport, you can either take the conventional taxi (Blue Bird or other companies) or the online taxi (GrabCar or Go-Car). Since my flight is after midnight, I took the airport train since I think it is the safest choice (I prefer to avoid any kind of taxis for evening/midnight trip to the airport since there are some accidents that happened at the evening/midnight hours on the airport highway caused by tired drivers travelling at high speed, and to avoid traffic jam I don't take the bus either). Long story short, the airport train wasn't even filled to half of its maximum capacity (as usual), and the 46-minutes trip to the airport went smoothly. 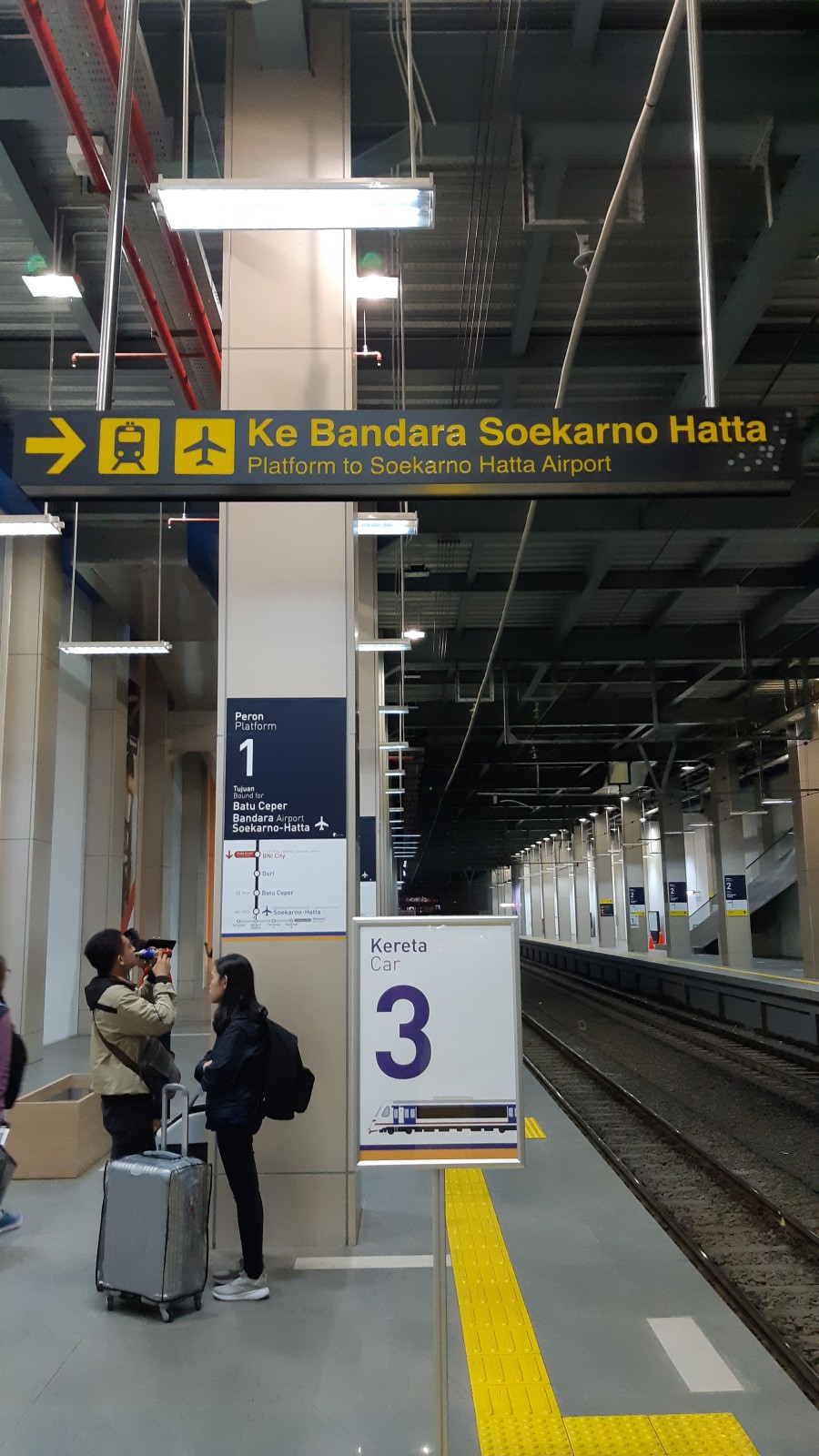 Arriving at the Terminal 3 of the Soekarno-Hatta Airport, I proceeded to the check-in island B. Previously, on our last pre-departure briefing, all staffs going for this trip (except me) didn't know that by the end of April QR has moved from Terminal 2D to Terminal 3, being the second last full-service foreign airline to left the old int'l terminal of CGK (the last was CX, that moved to Terminal 3 on May 1). Luckily for other pax, they finally got rid of the old, smaller terminal. But unfortunately, it was kind of "sad" news for me, since actually I loved the Terminal 2 more than the Terminal 3 because of its ornaments. I'd agree with others that Terminal 2 is outdated, but it still has more artistic feel than the plain, boring Terminal 3. And to make things worse, the authorities and airport operator claimed that Terminal 3 CGK is on par with… Singapore Changi Airport! Yes, the one and only SIN that got the title of world's best airport for consecutive years! While SIN indeed looks like the best airport in the world, (Terminal 3) CGK looks… well, big, very big and (indeed) spacious, but apparently still far from being the best airport in the world.

The international part of the terminal looks very similar to the domestic part, so I didn't take many photos since I got to fly with Garuda on most of my domestic assignment. Because the flag carrier of Indonesia is the sole airline operating out of the domestic part of Terminal 3, I will travel mostly through this same terminal, unless I got assigned on another airline that fly out of Terminal 2 or (worse, and LCC-only) Terminal 1. 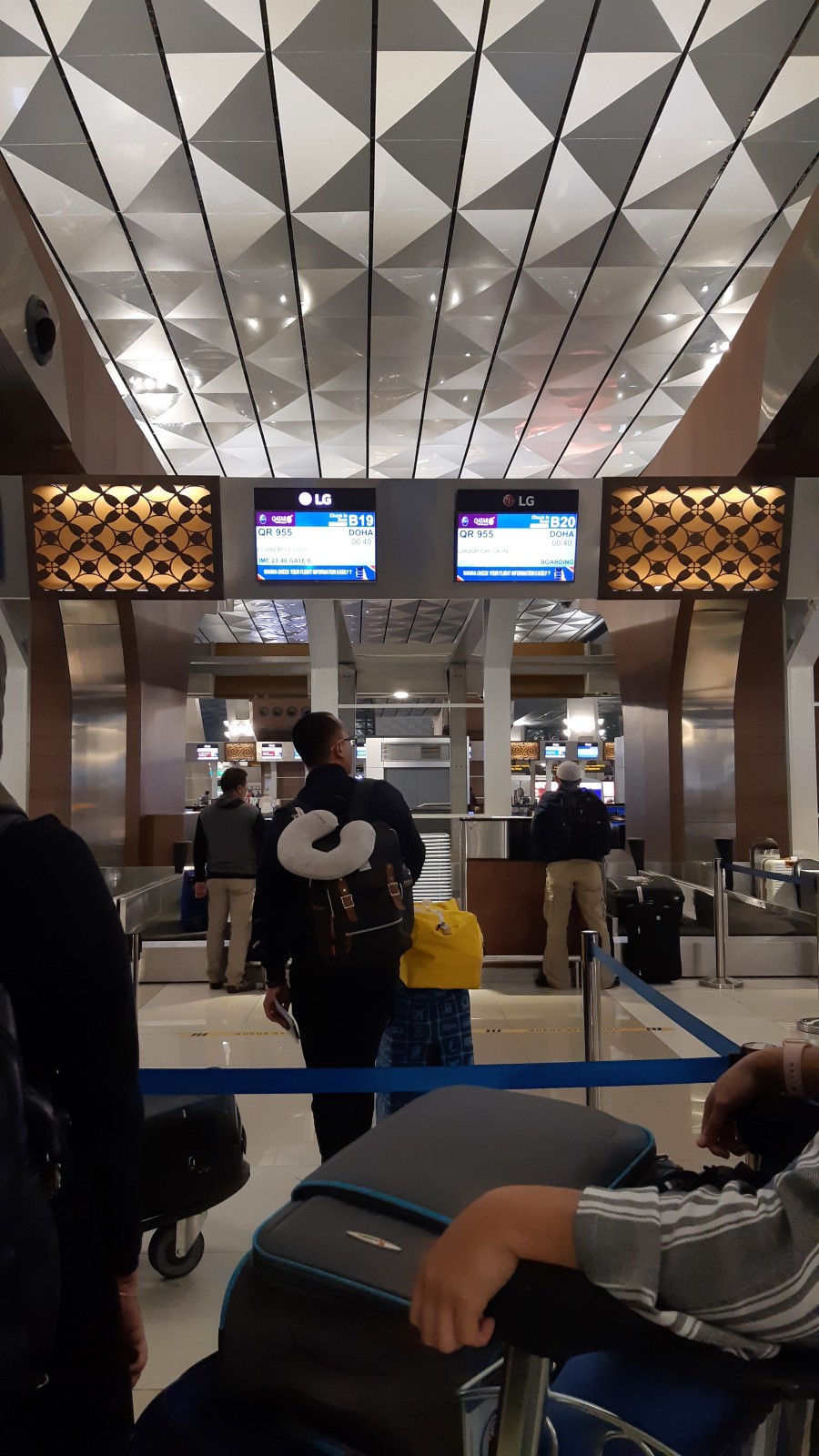 At the check-in desk, I asked the staff if I can get assigned aisle seat at the bulkhead/emergency row on my connecting flight to Houston, but apparently he couldn't do that, but then told me to ask for that arrangement at the transfer desk once I arrived in Doha. So, for the time being, I got the initial aisle seating arrangement for the DOH-IAH leg (18C), along with the window seat for the CGK-DOH leg (20K), which later I would regret about. 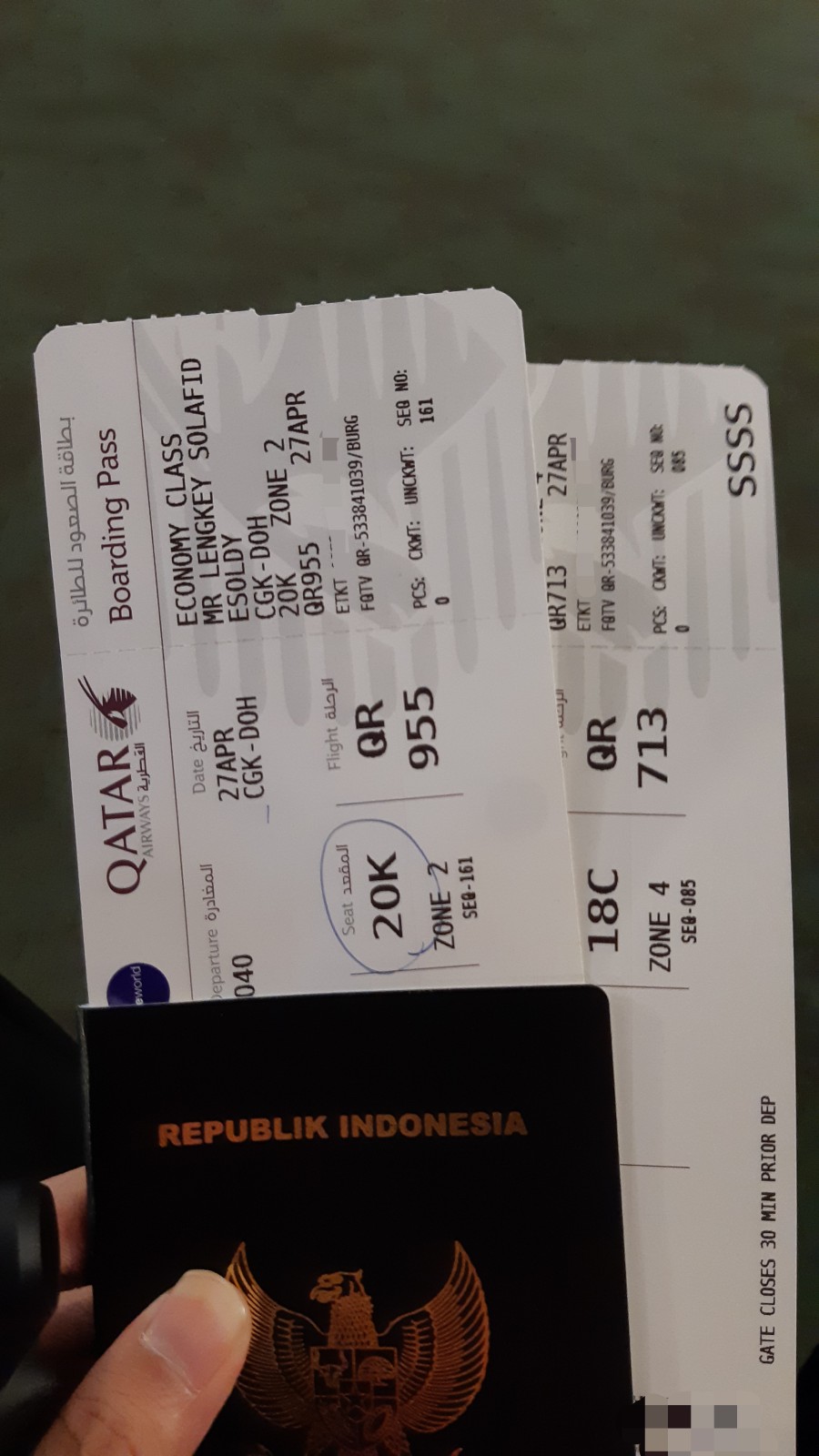 When I saw the infamous "SSSS" on my DOH-IAH boarding pass, I thought because that was my first ever US trip. But then, when I checked with my colleagues who were also on their first trip to US, they didn't get the same thing.
Long story short, I went directly to the immigration and to the assigned gate for QR955. I noticed that my boarding pass got stamped along with my passport, and from what I can recall, on my last trip abroad (to KUL on QZ) the immigration staff didn't put stamp on my boarding pass. I don't know if it was an updated protocol for Indonesian immigration. 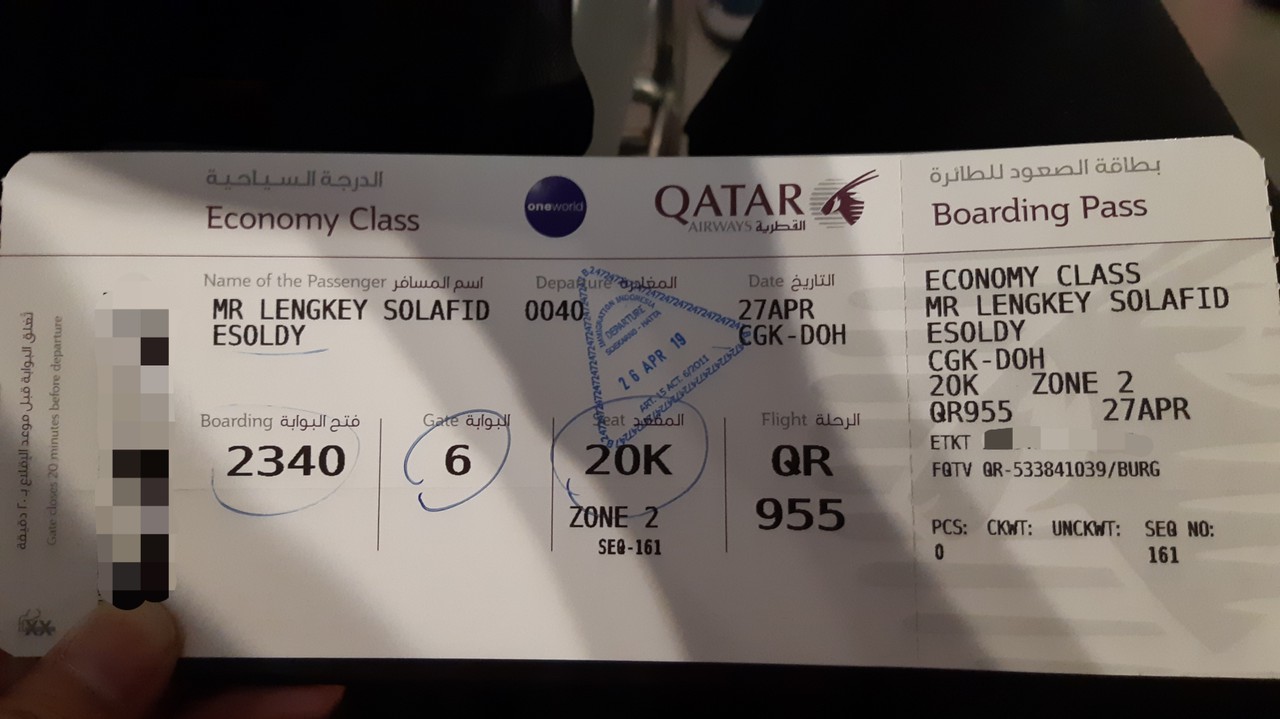 Boarding call came exactly at 23:40 and we were asked to queue according to the zone number written on our boarding pass, except for J-class and QR and/or Oneworld FF members. But since I was still a "beginner" member, I have to wait in the regular queue. 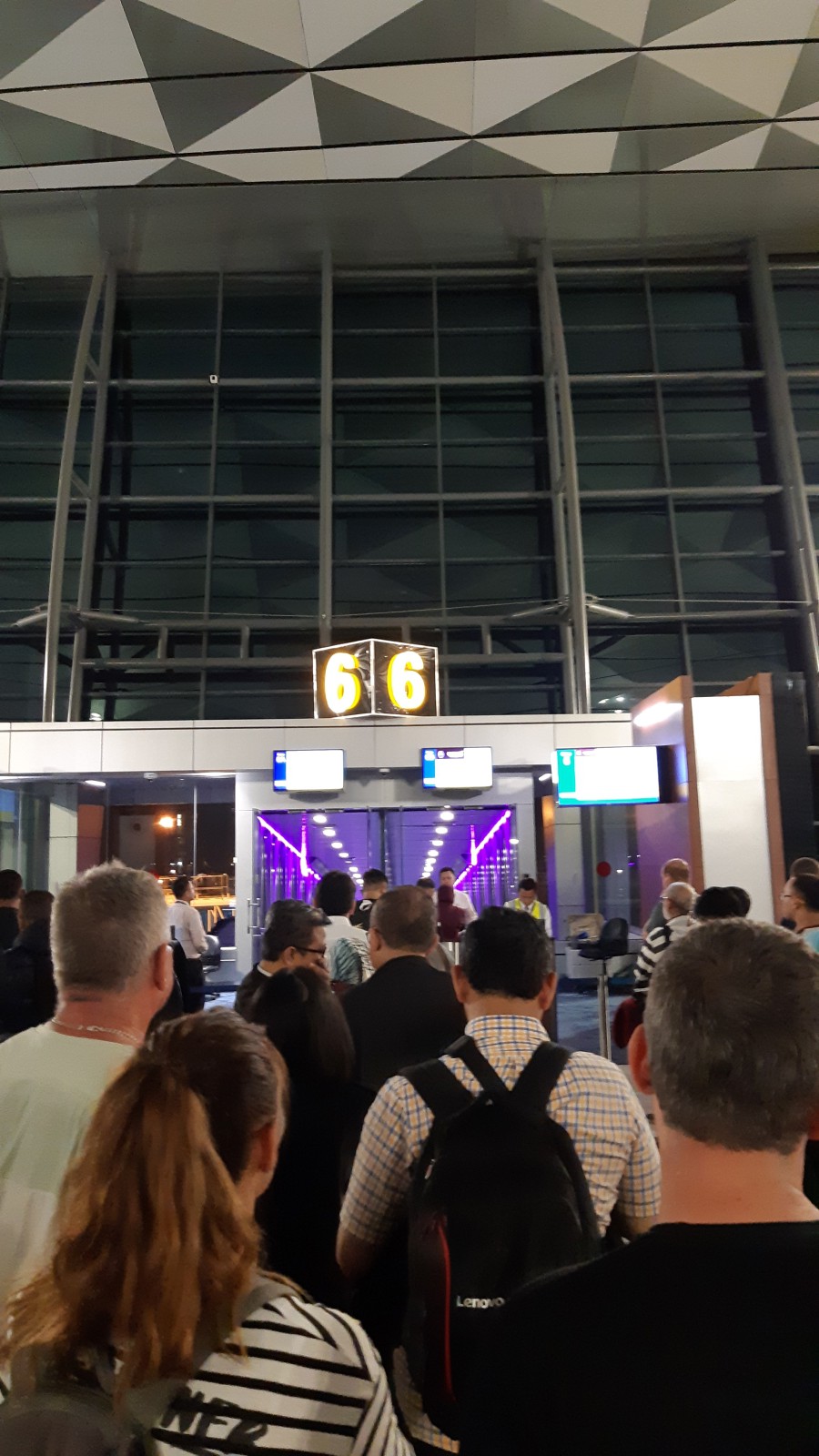 Compared to what I experienced at DOH (and later, on my way back, at IAH), the boarding process was longer here at CGK. About 15 minutes after we were asked to form the queue, we were still standing and waiting for the priority boarding to finish. And then, suddenly the lights around Gate 6 went off. Oh yeah, compliment from the airport claimed to be on par with the world's best, great! 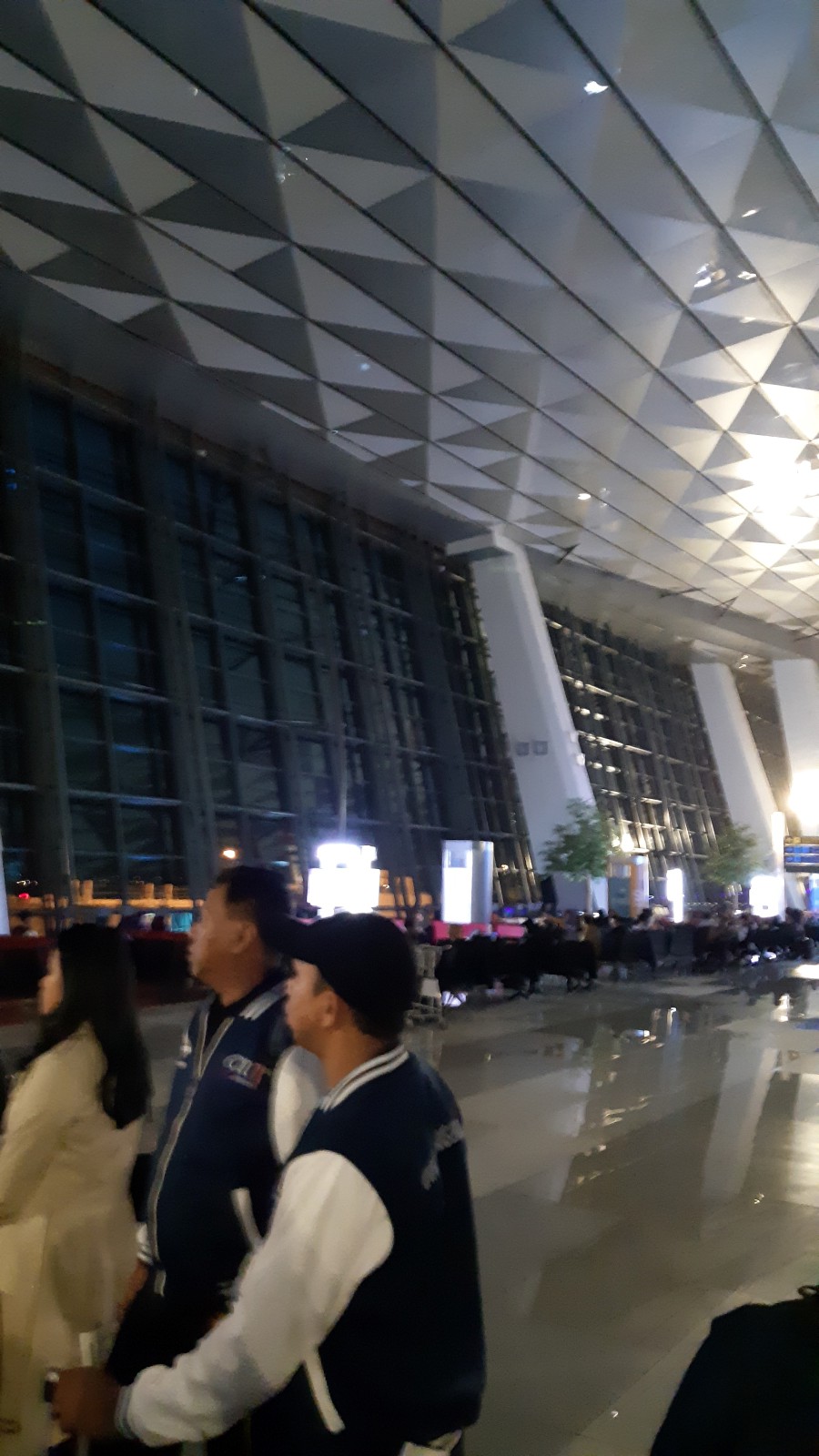 After standing in line for about half an hour, I was finally on board my first Dreamliner, A7-BCI. Here is the IFE screen and full touch-screen controller. 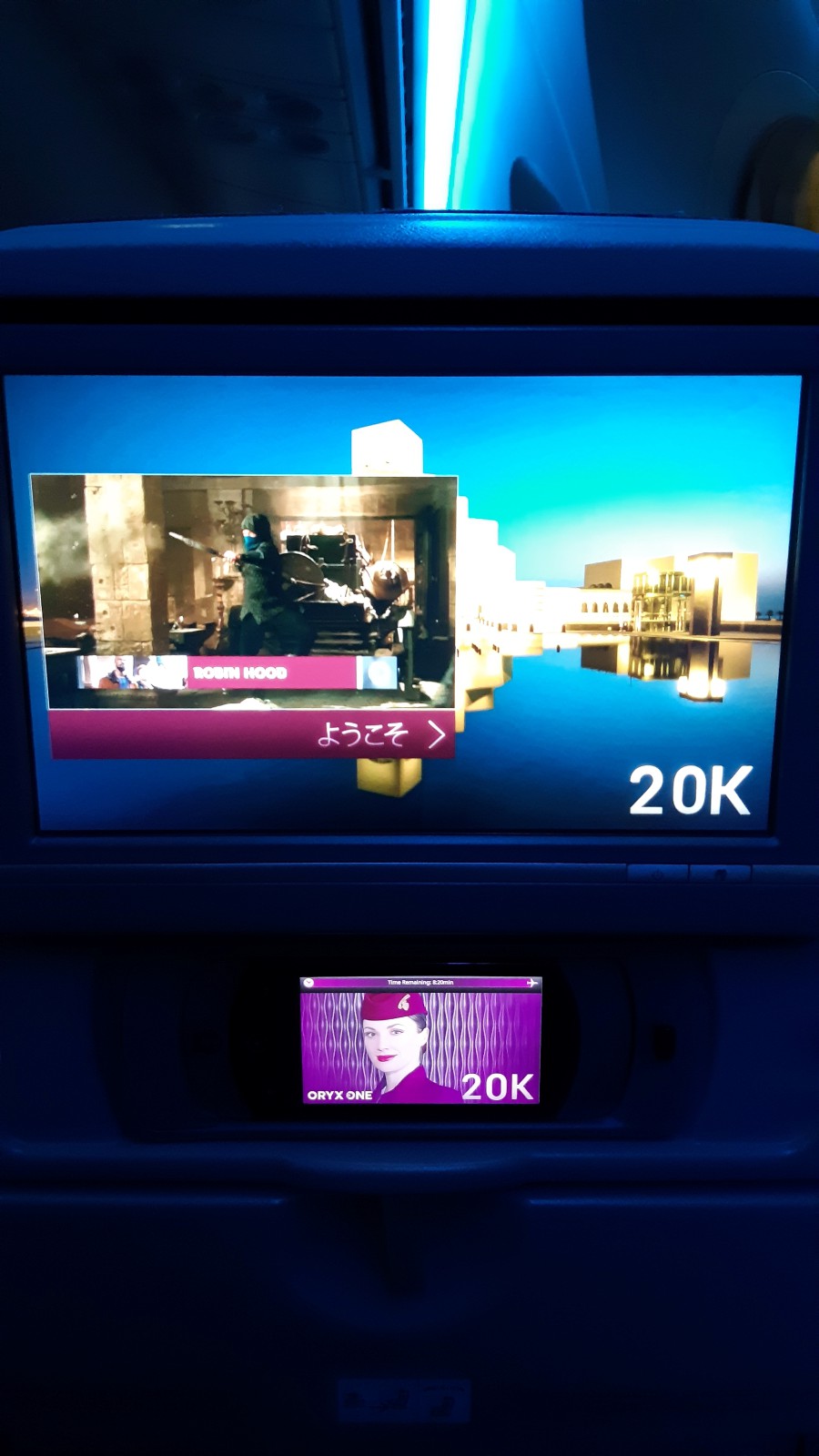 Ten years ago, the last time I flew QR, the CGK-DOH vv was still a 1-stop flight through SIN, flew with both A330 series. The only thing I loved from A330 compared to the Dreamliner I flew this time is the 2-4-2 configuration, something you won't find on other economy class cabin (except if you're seated at the last row, where there are only 2 seats next to the window side compared to 3 on other rows). This technical thing made me regretted the choice I made by taking the window seat, because I couldn't freely get off from my seat since I got two passengers to pass through. Anyway, beside the seat choice, I was happy that I finally could fly on a Dreamliner.

Long story short, take-off roll was at 00:57 (after a long taxi from our gate at Terminal 3 to Rwy 25L at the opposite side of the airport) and about 20 minutes later the crew gave the menu booklet for our flight. For the first and main meal, there were 3 choices of main dish, along with salad for appetizer and mousse for dessert. For the main dish, I took the beef with creamy mustard sauce (sorry that I forgot to take picture with the main dish opened). 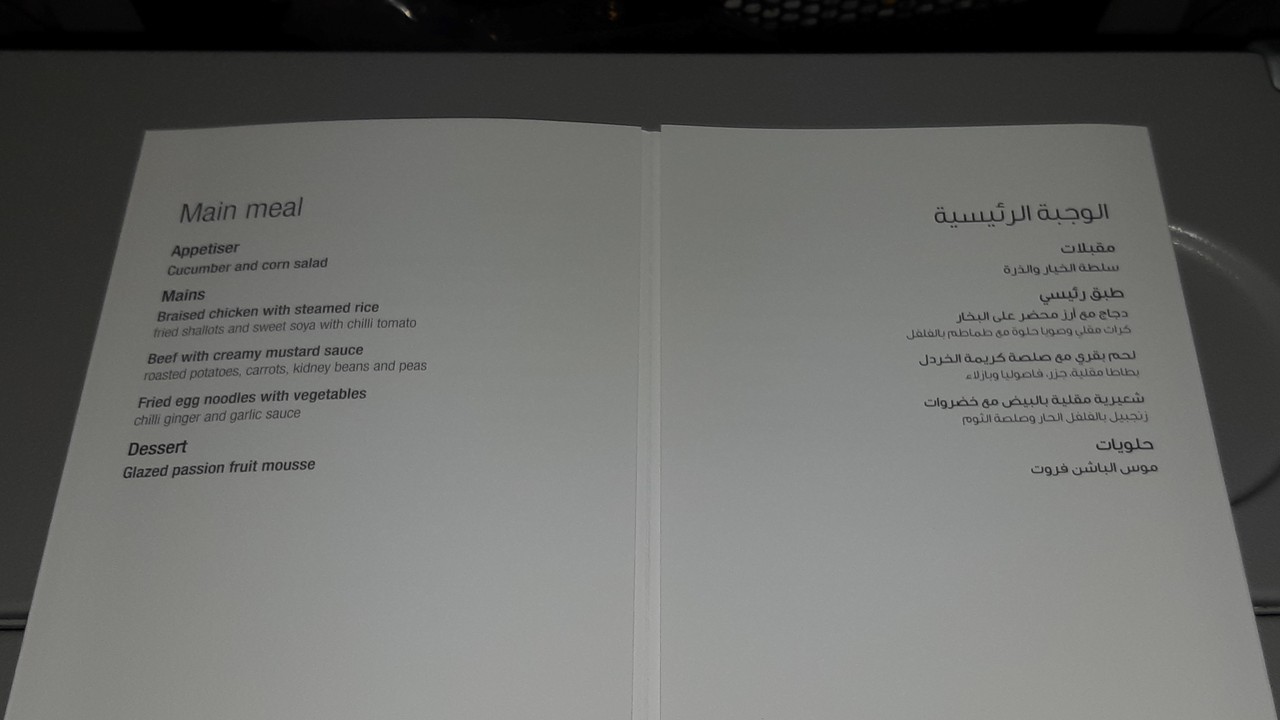 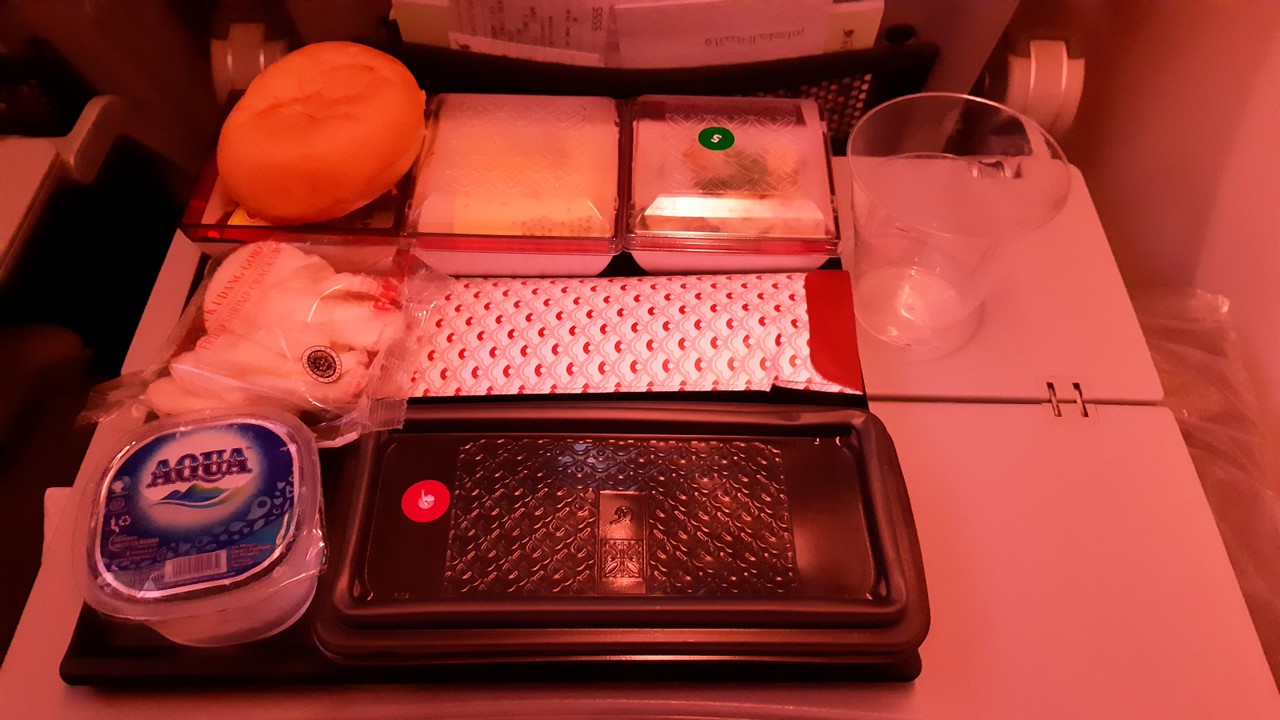 I noticed that the Aqua cup was smaller than what I used to see. I think this variant is only made for special purposes (like for airline catering, since it has to fit inside the small trolley) and was not for sale at groceries. And because of its tiny size, I eventually asked for extra glass of mineral water… 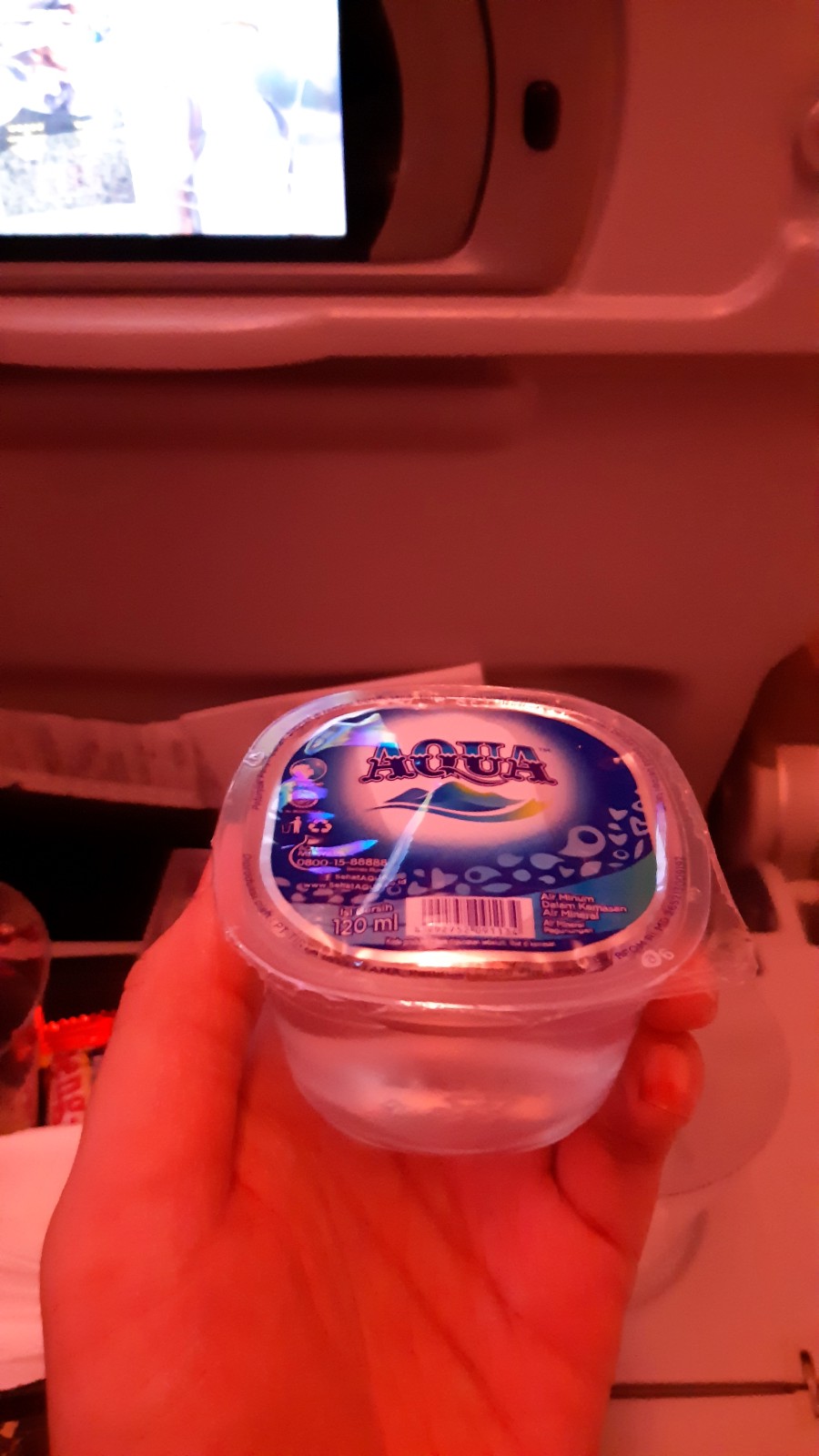 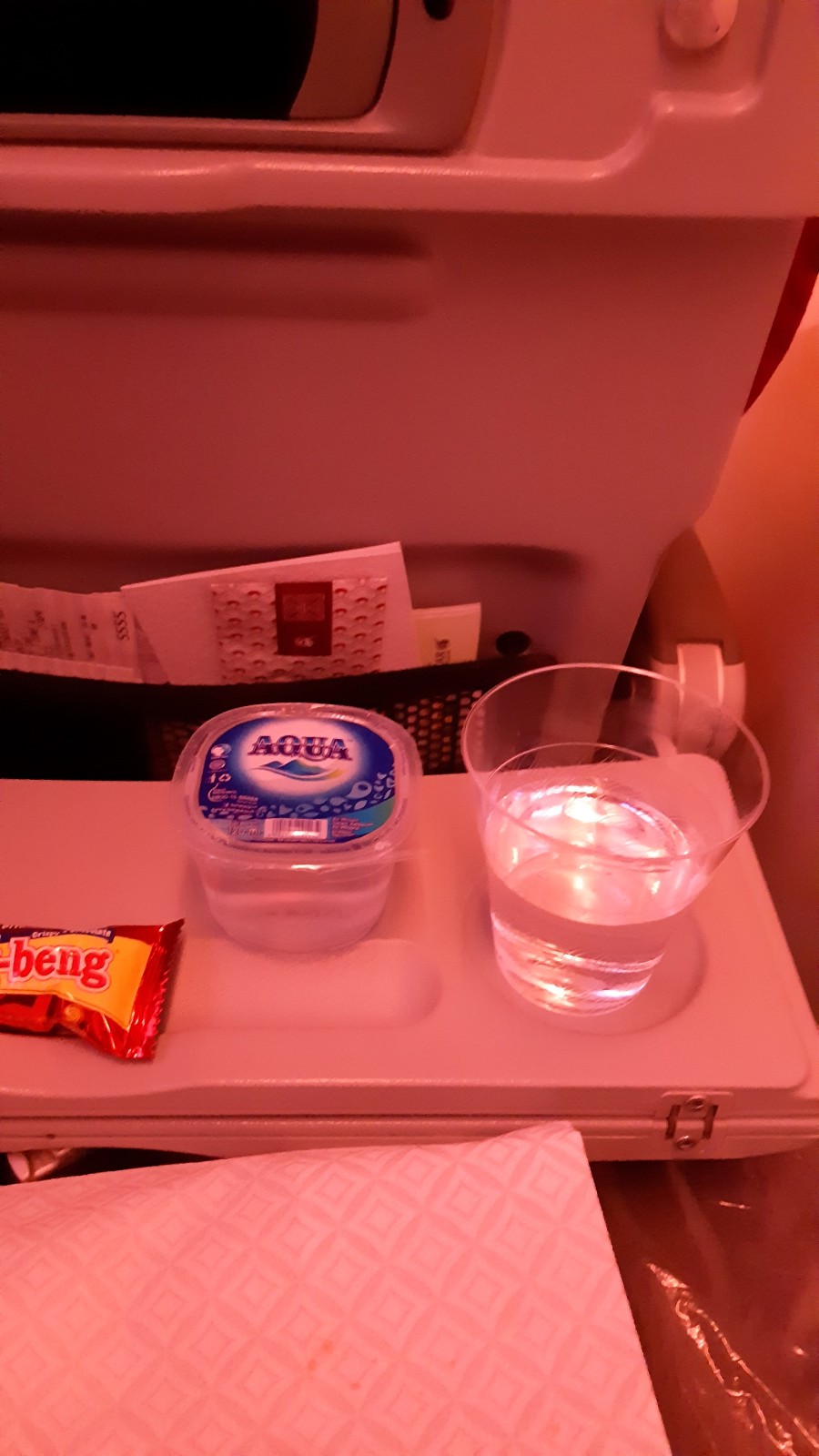 After finishing my meal, I took my first (of only two) toilet break and then going back and prepare to sleep, like the others. Photo before sleeping for the next 4 hours… 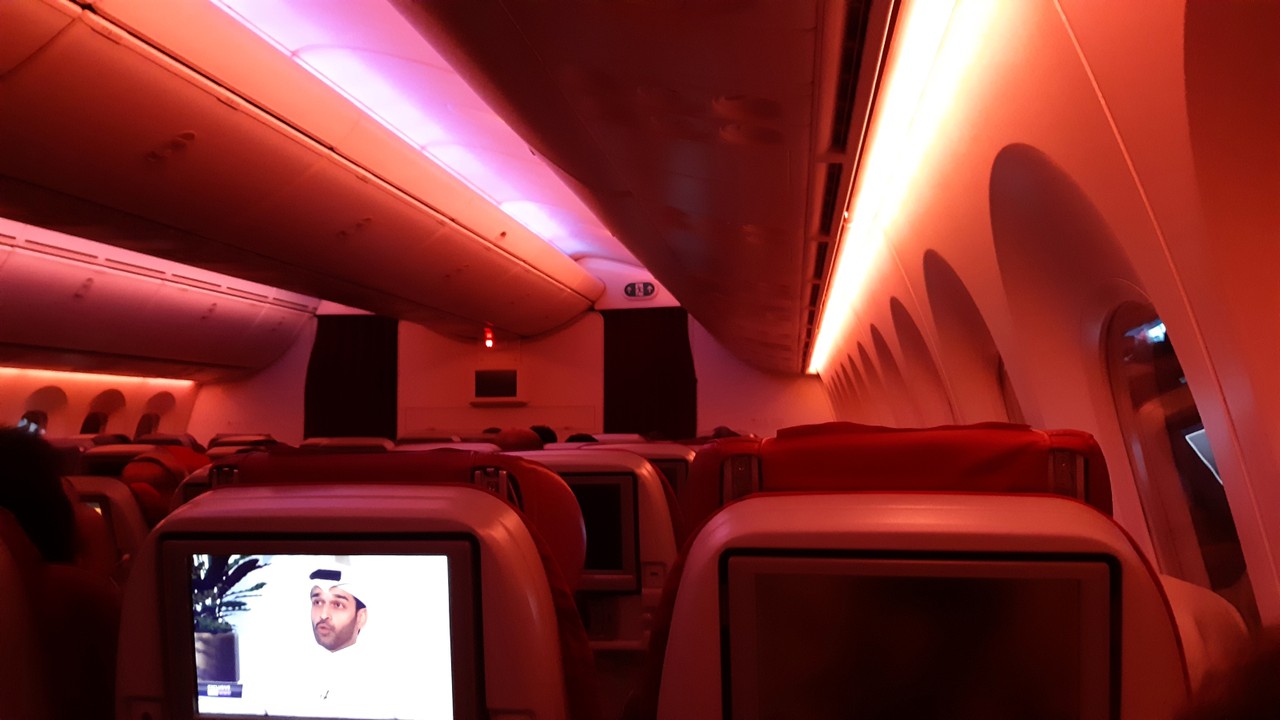 When I woke up, it was 7:30 am in Jakarta, and with 4-hours difference, it would be 3:30 am in Doha. The FAs come with our breakfast, from which I chose the shrimp nasi goreng. 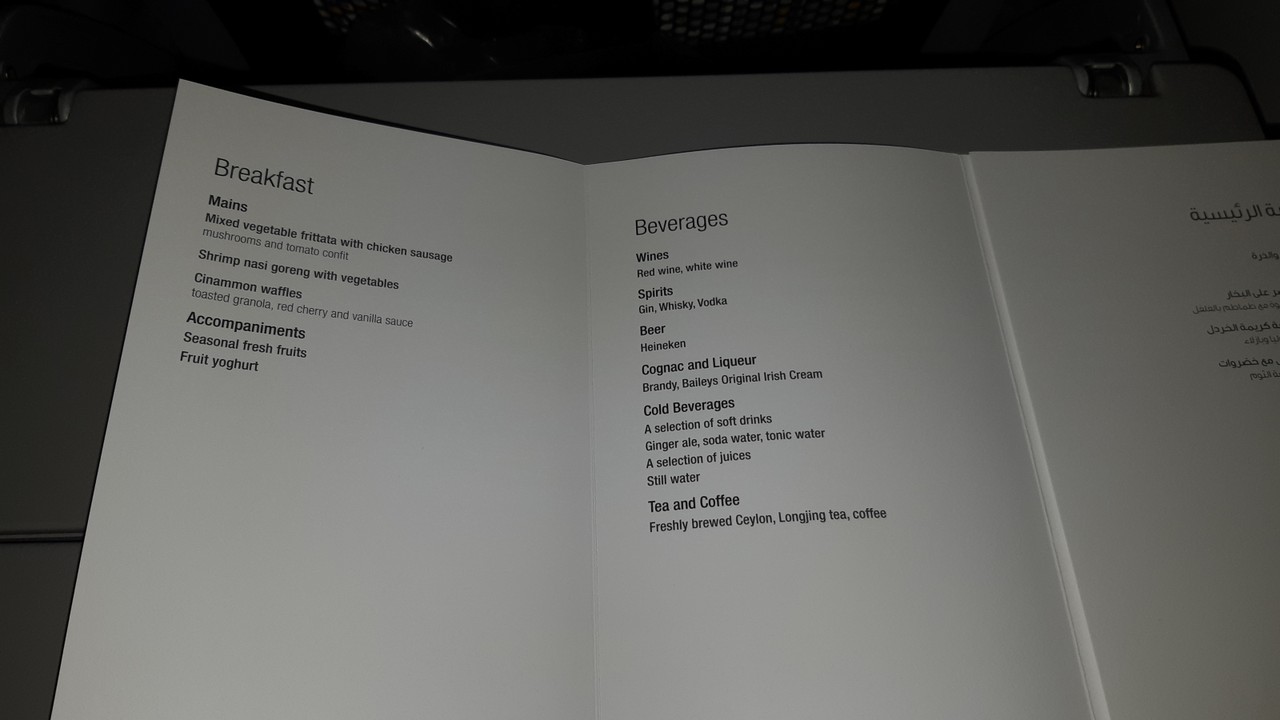 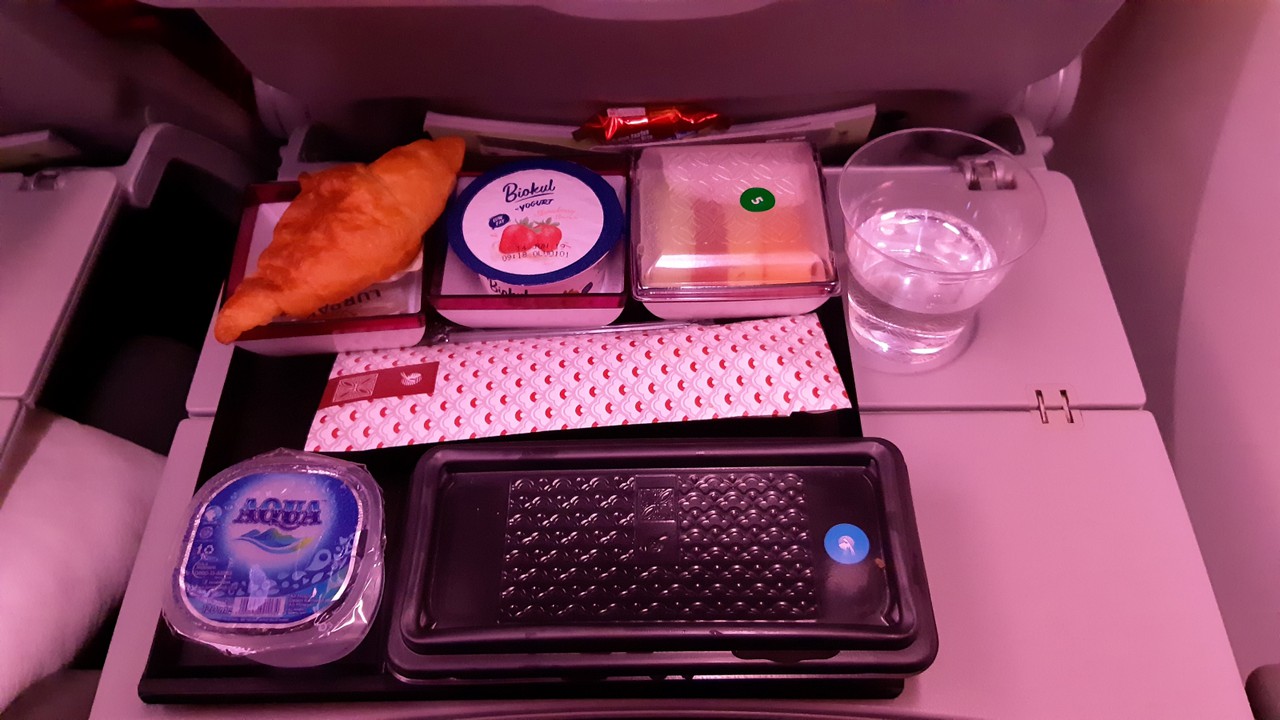 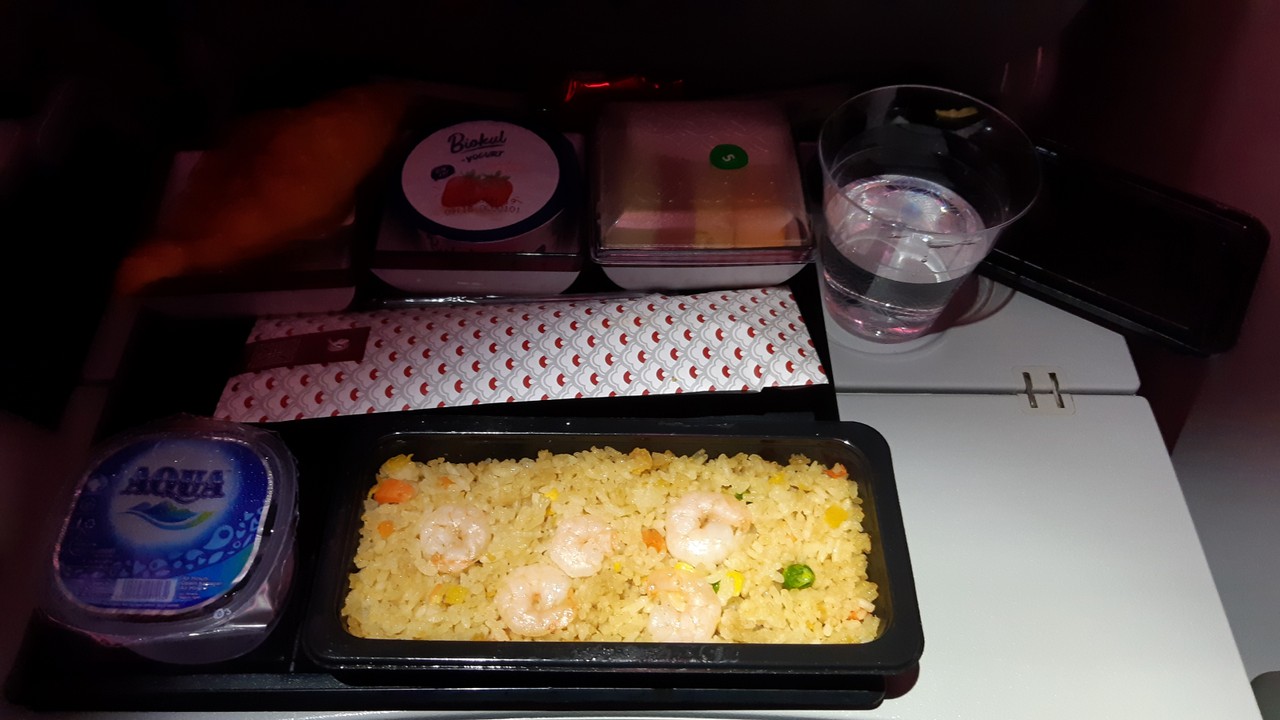 This would be my only meal on all of my QR flight segments that was accompanied with a croissant. Unfortunately, this particular flight was also the only one where the breads were not served warm. 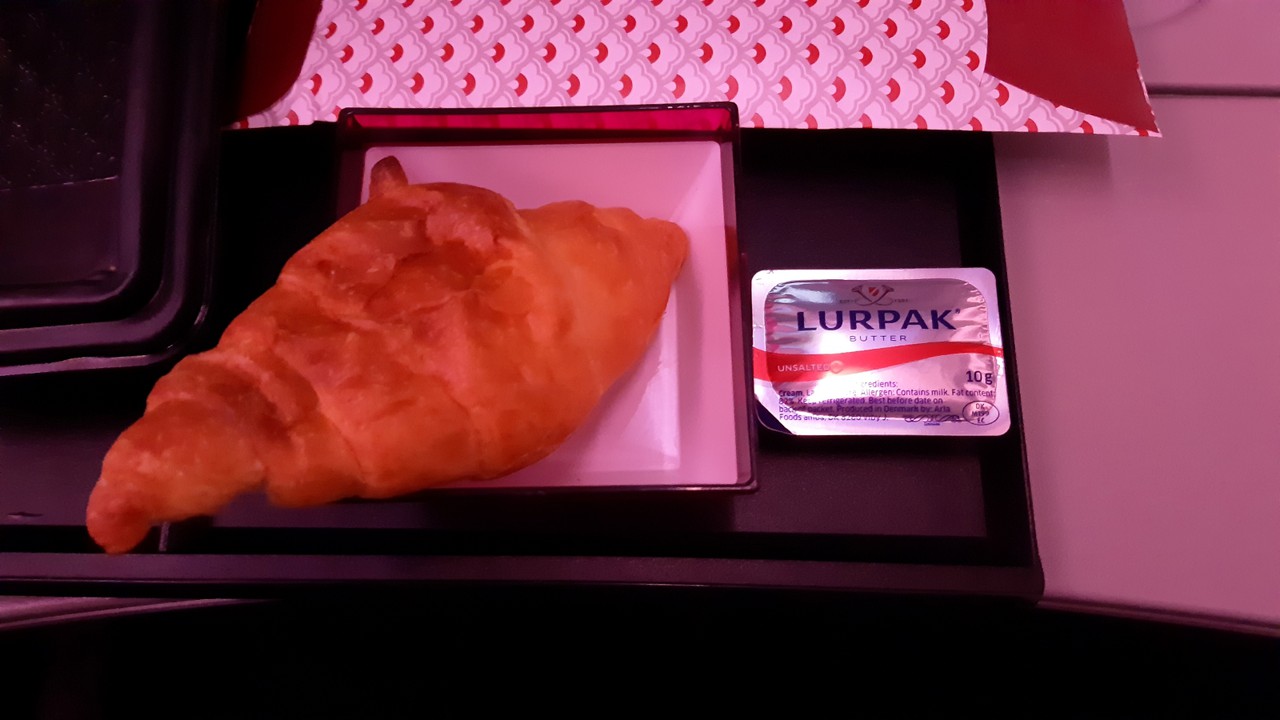 As is the case since the diplomatic crisis started in 2017, no Qatari planes are allowed to fly through UAE airspace, so my plane flew around the UAE northern coast before heading west again and started the descent into Doha. 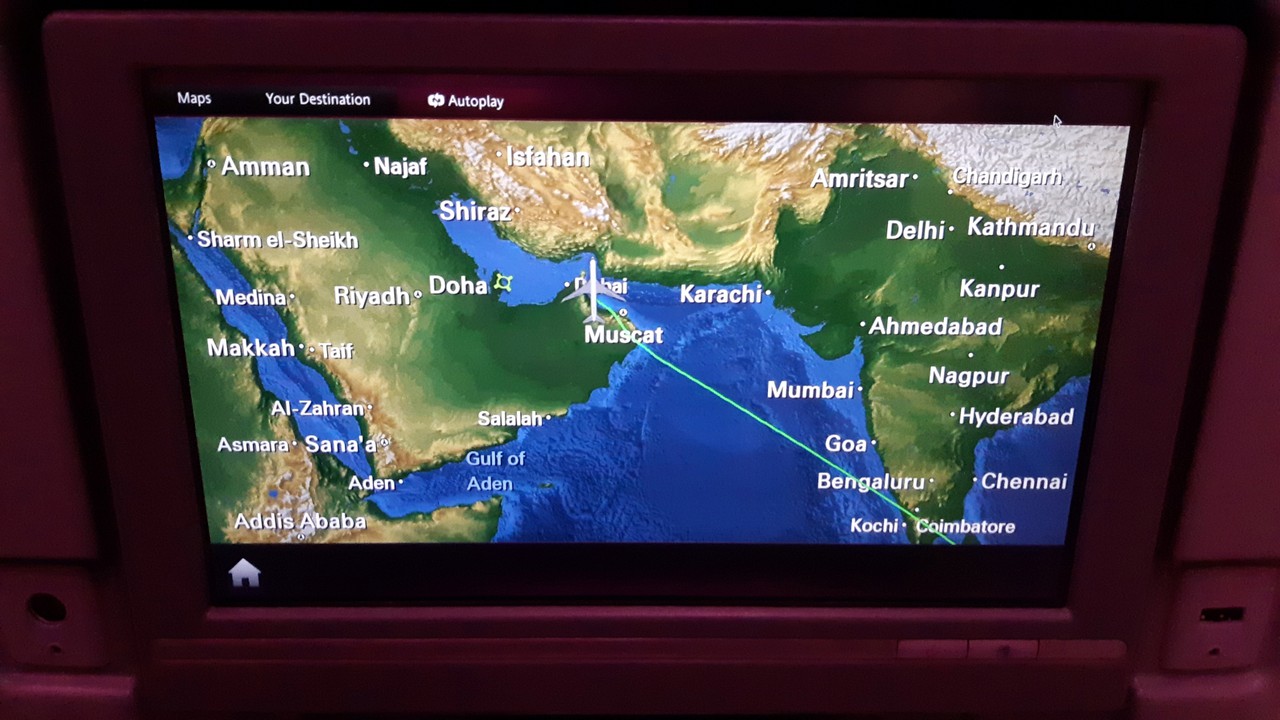 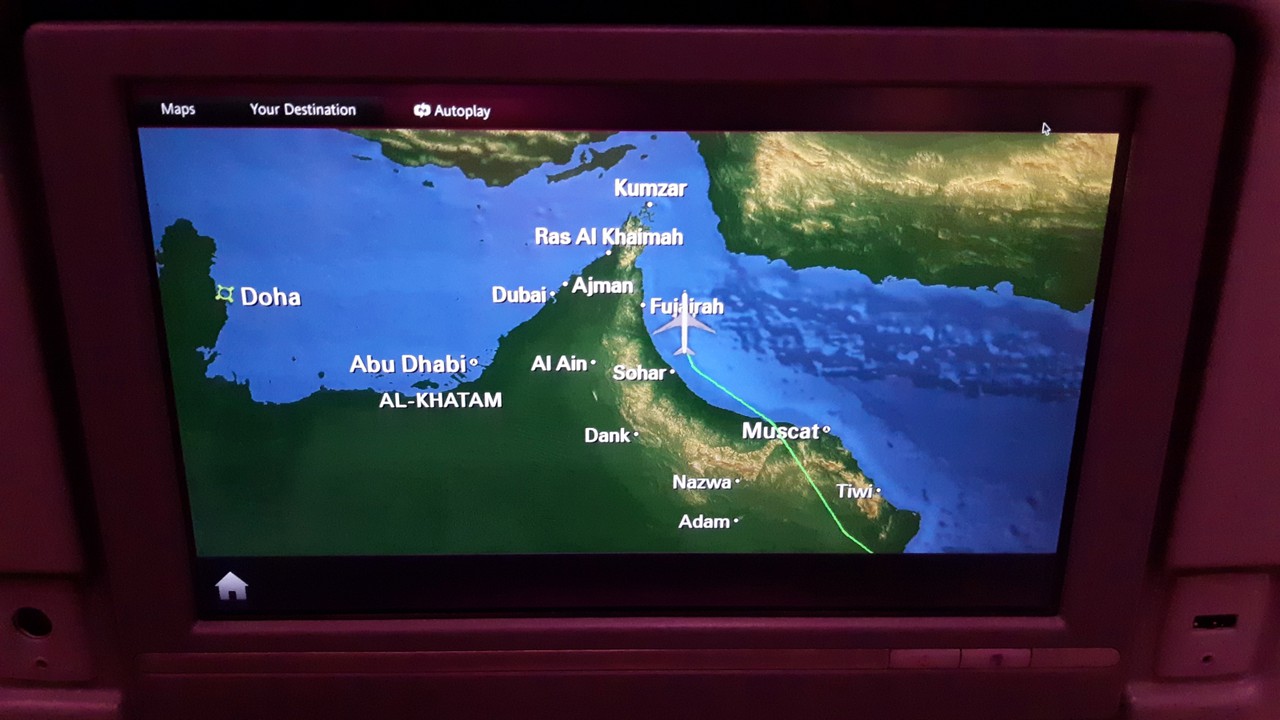 The local time was about 04:30 am so finally I didn't stare at blank, dark sky anymore. Well, it wasn't that bad at all taking the window seat, but for now, I will surely think twice taking window seat for flight longer than 4-5 hours. 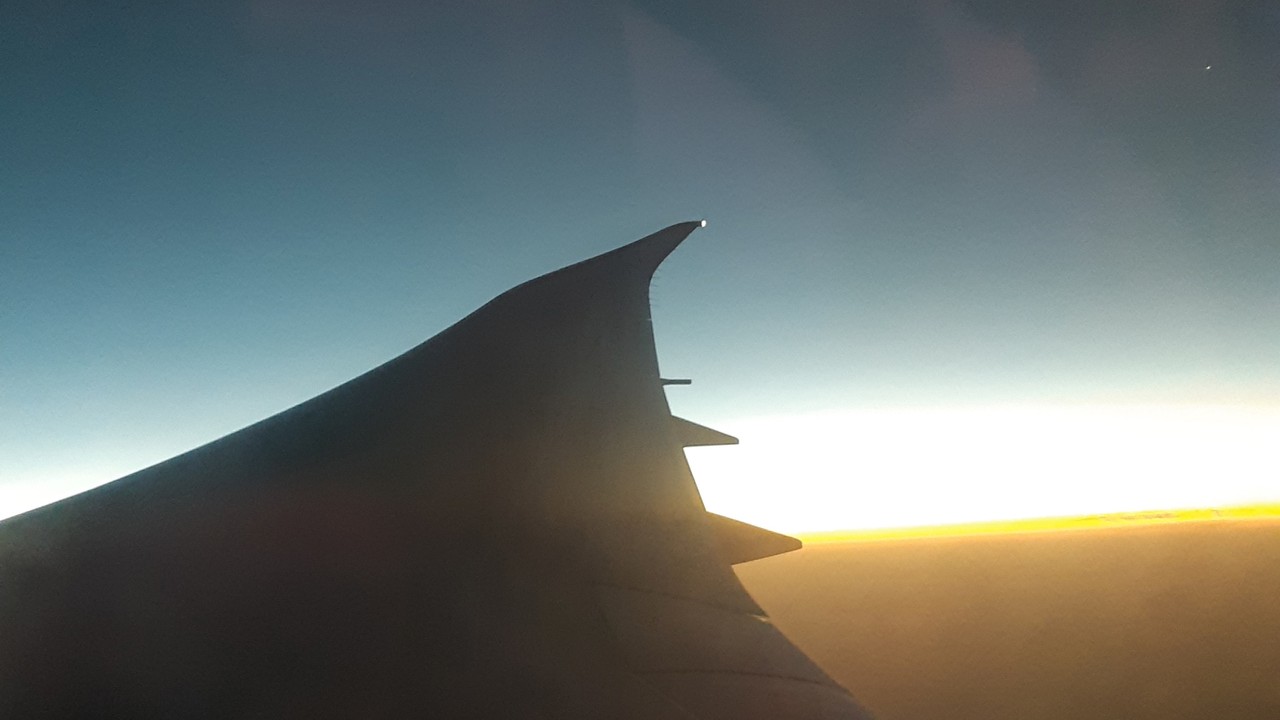 Another photo of the cabin, when the time to open the window blind has arrived. 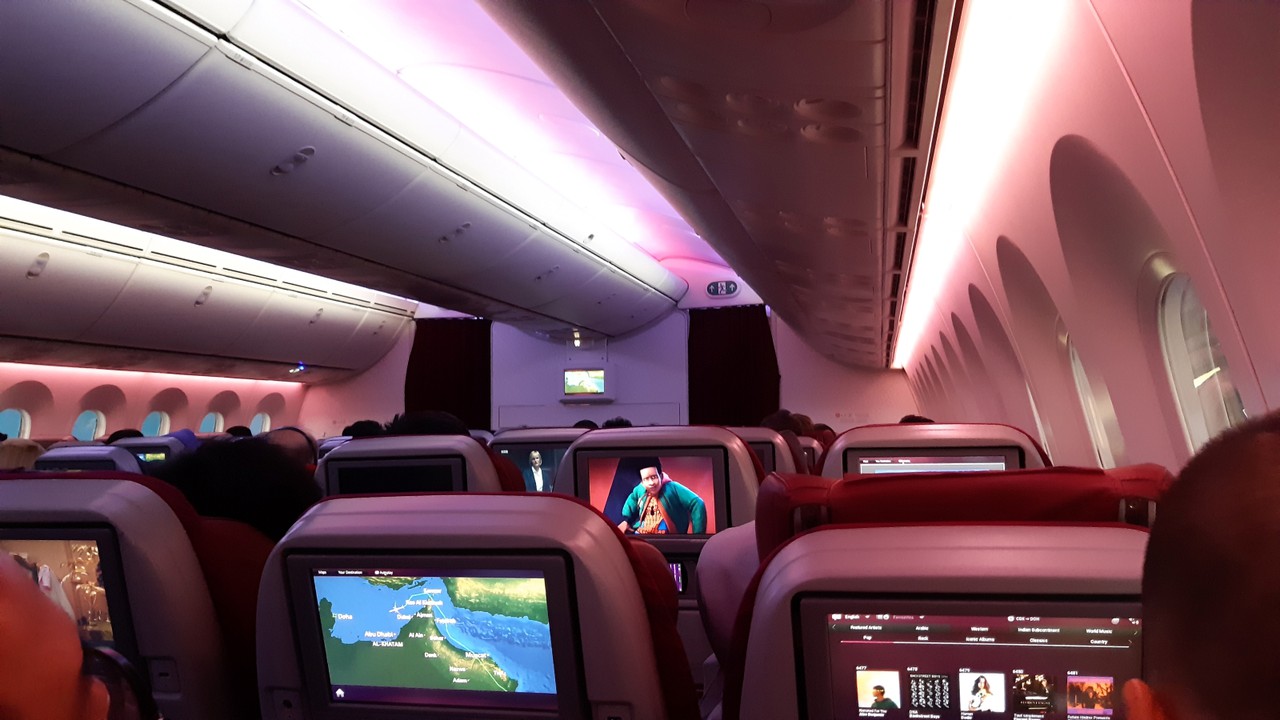 Touchdown was at 05:06 local time, and after that the Dreamliner reached the assigned remote stand 7 minutes later. 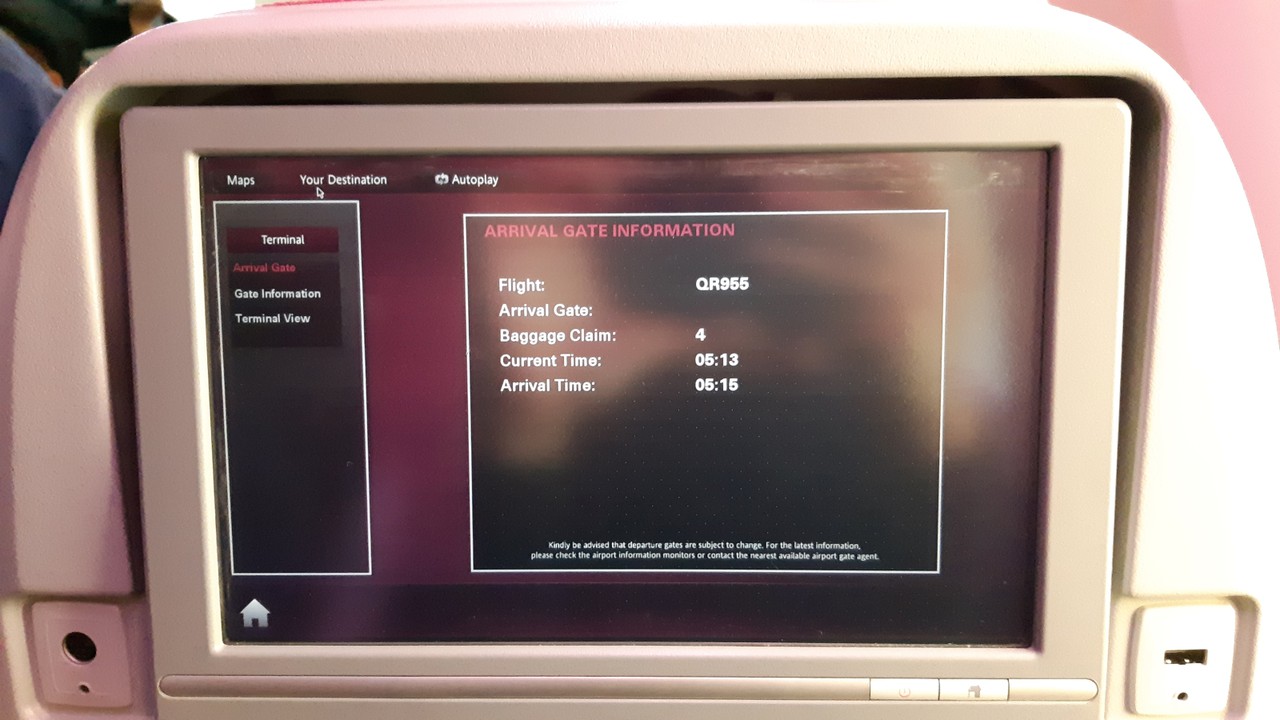 I was down on the bus about ten minutes later. The bus trip to the main terminal was kinda "throwback" for me, since the old Doha Airport didn't have jetbridge. But instead of seeing an Airbus parked at the remote stand, I got a Boeing. 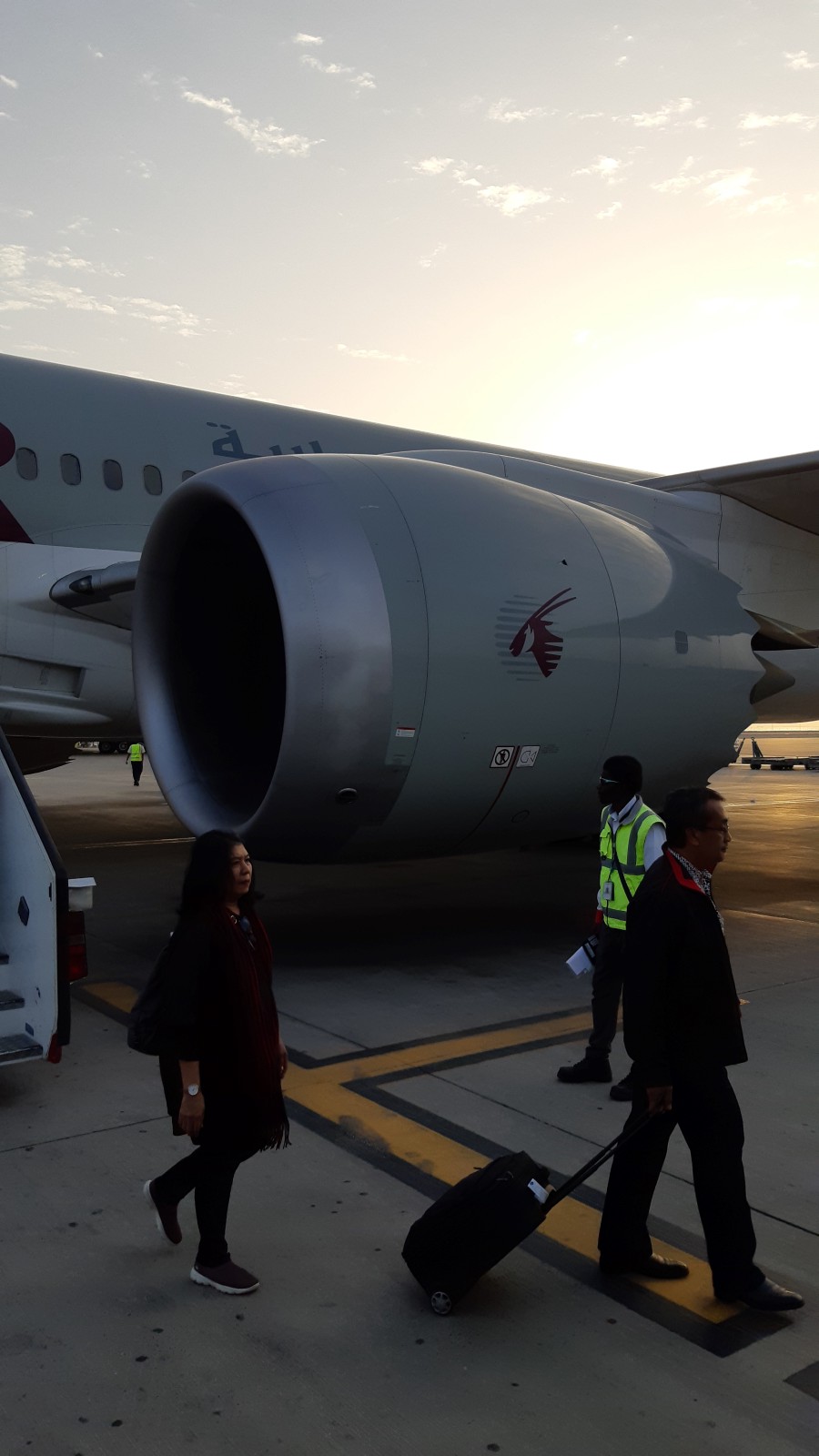 And it was not just a random Boeing. It was the Dreamliner. 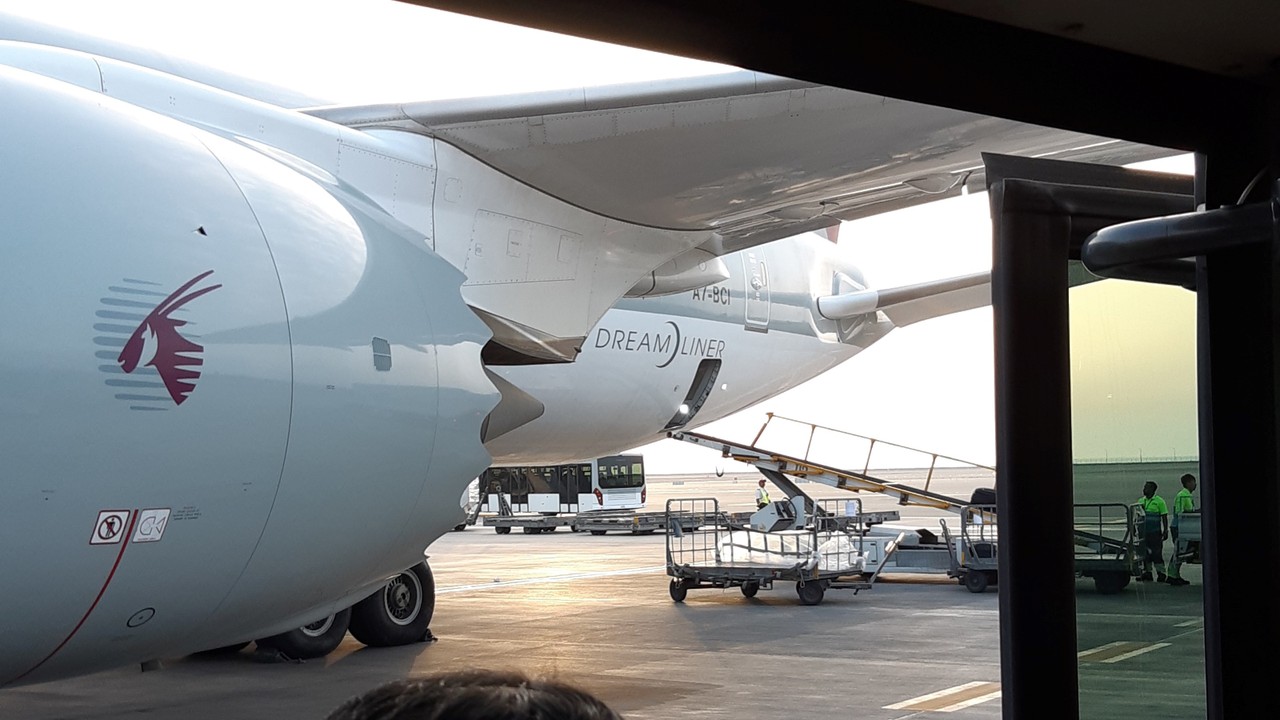 Since the transit time from my first to the second leg is less than three hours, I went directly to the transfer desk to rearrange my seat and then proceeded to Gate D3, from where my flight to Houston will depart.

On this trip, I also made a "mini" vlog report, hence the not-so much photos. You can also check my vlog below:

Well, that's all from my first flight report. I'm sorry that I didn't take many photos, since at the same time I also made a vlog about this trip.

I also remember that 10 years ago I bought an A340-600 die cast that was made by Herpa. Currently, QR still offers die cast planes to be purchased on board, but unfortunately it seemed that the manufacturer wasn't Herpa anymore (I can tell it because Herpa is very good at details, while the current product offered by QR isn't as good as Herpa products). Hope that should I hop on QR again in the future, the Herpa die cast will be back! (well, I know I can buy it from online store, but still I feel different if I bought it on board)

Anyway, the downside from this flight would be the on-board wi-fi. QR offered free and paid packages, but the free packages on CGK-DOH vv segments are only for messaging + "small" amount of fair use limit; meanwhile, the same free packages offered on DOH-IAH vv segments are available also for social media, and with no other than time-based limit. For the entertainment system, I think it's pretty good, but then on this flight I didn't watch any movie, just listening to some music available on the system. For the handheld control, I don't know why but I found that the old, keypad-only controller (like those I found on the 77L to IAH and back) is better suited for me than the new, all-touch screen one found on the 787.

As for the airport, the new DOH is very nice. It's way bigger and more spacious than the old airport I visited 10 years ago. Eventually it has some exhibits spread around the terminal. Terminal 3 CGK is also very spacious, but from design aspect, I simply prefer the older Terminal 2. I also think that the lighting at CGK is badly arranged, so that during nighttime at one place it could be very bright and at another place it could be dark. At the other side, even though the terminal is also big, the lighting at DOH is somehow better, both at accomodating natural lights during daytime and lamps during nighttime.

The contributors of Flight-Report published 3 reviews of 1 airlines on the route Jakarta (CGK) → Doha (DOH).

The average flight time is 8 hours and 26 minutes.