#12 out of 102 Airlines A minimum of 10 flight-reports within the past two years is required to appear in the rankings. 42 reviews

By TerryYong 3351
Published on 26th October 2013
Most people would visit Niagara Falls from late spring to early autumn as that is when most attractions would be in operation. For my visit in early March, the entire Niagara Falls felt like a ghost town, with most attractions like the Maid of the Mist and Caves of the Winds closed. However there is still a charm in visiting Niagara in winter, with no crowds to jostle your way through.

Rapids of river towards the falls.

Trolley bus shuttle within the park. There is a shuttle every 10mins!

The bigger Horseshoe Falls, where idiots went over in barrels.

Within the State Park

And lots of squirrels around! The little one preferred my potato chips to the berries it was originally eating on a tree!

As mentioned earlier, we took the Airport Shuttle back to Buffalo Airport in the evening, after having a light bite at Hard Rock Cafe Niagara Falls. The shuttle could be arranged at the Niagara Falls Visitor Center for only USD16 per person. Much lower than our USD70 taxi fare to Niagara Falls! Again, having done internet check-in earlier, we just picked up our boarding passes at the check-in counters at Buffalo airport. There were no queues at all as we were still rather early. 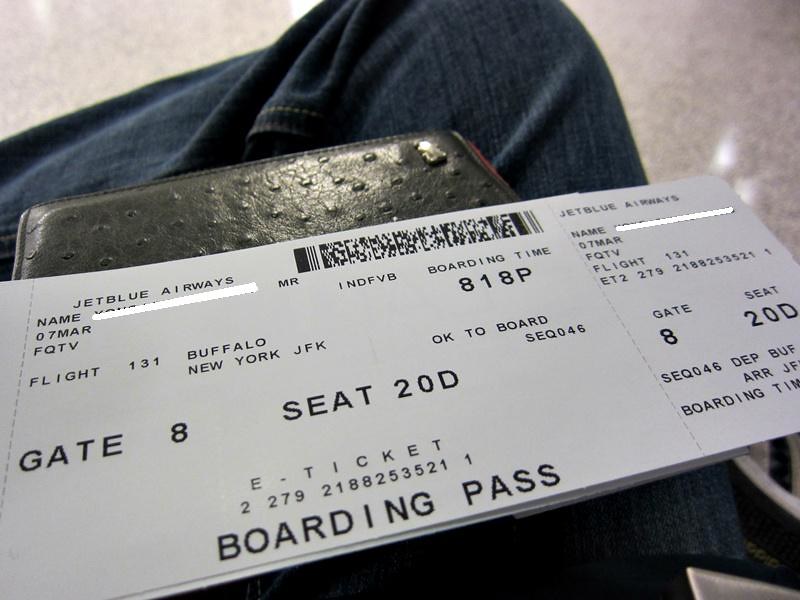 Off through security again with the same rituals without fuss and into the secure areas. I was getting quite deserted with most shops closing or closed, leaving only a restaurant still in operation till the last departure. 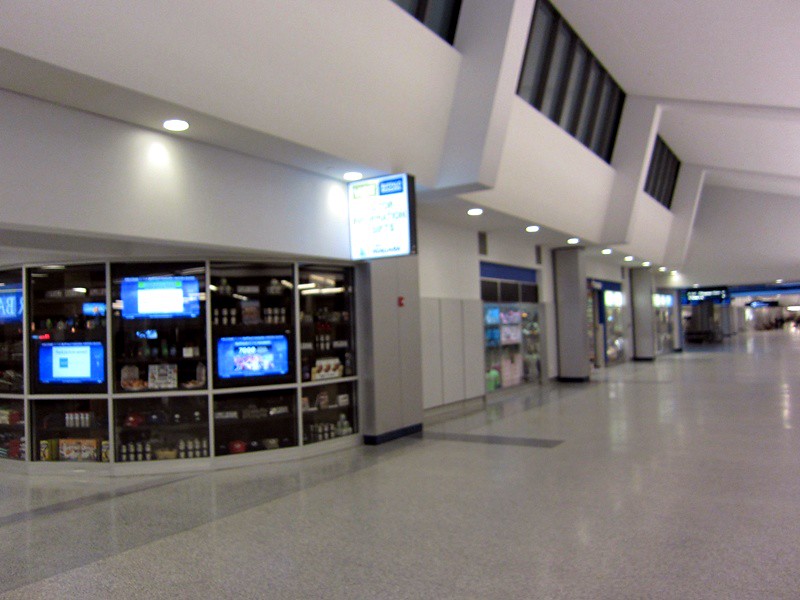 At the next gate was a delayed Boston flight due to bad weather in Boston. According to the flight information boards, all flights to Boston experienced lengthy delays that day. 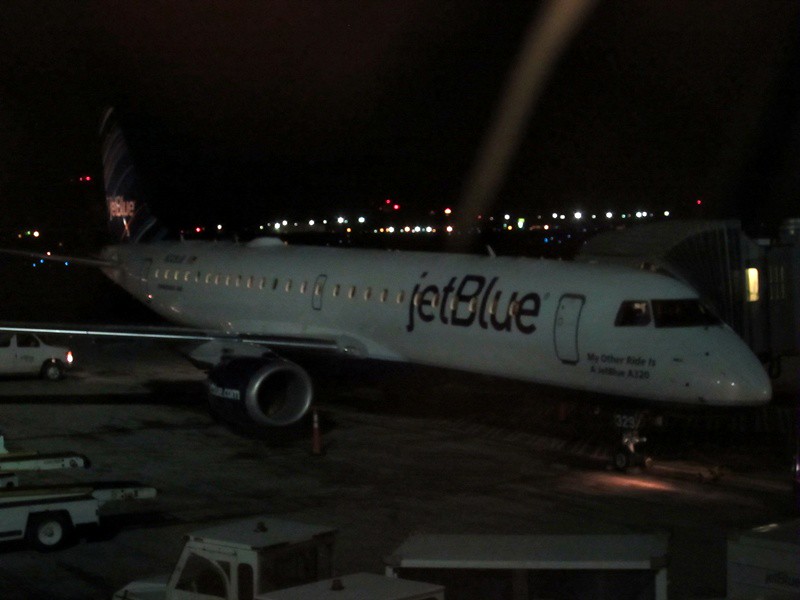 Soon, the gate agent announced that our flight would be slightly delayed for 20min due to late departure from JFK. Apparently the weather in JFK was also worsening with the snow storm approaching. I was just glad that the delay was not as long as the neighbouring Boston flight, which was delayed more than 2hrs! 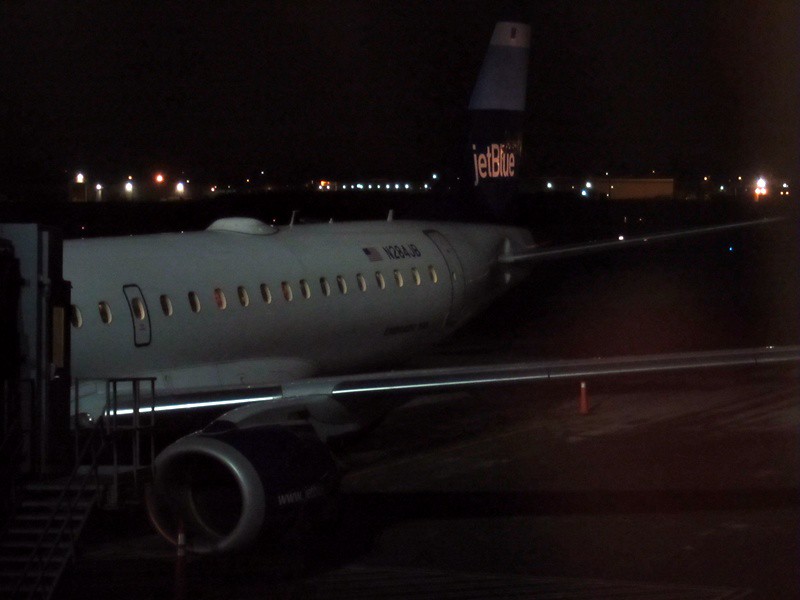 Luckily the turnaround was rather quick and the plane was rather for boarding less than 10min after the last passenger got off! It was my first time flying on the Embraer aircraft and even though the seat configuration is in 2-2, it still felt rather spacious. Jetblue's E190 was configured with only 100 seats, thus only 2 cabin crew were needed. Seats were the same as on the A320s. 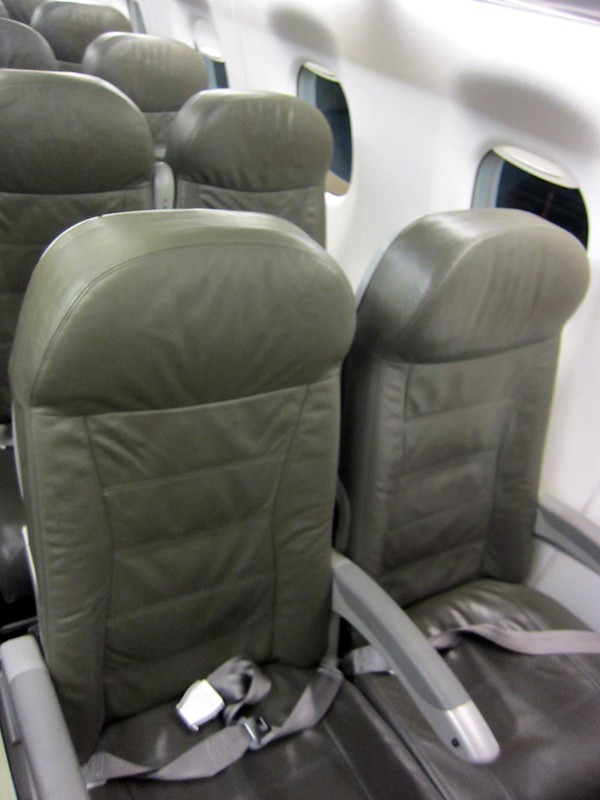 Legroom on the E190 was only 32 compared to the A320's 34, but still more than sufficient for the short sectors the E190 operates. DirectTV is also available. 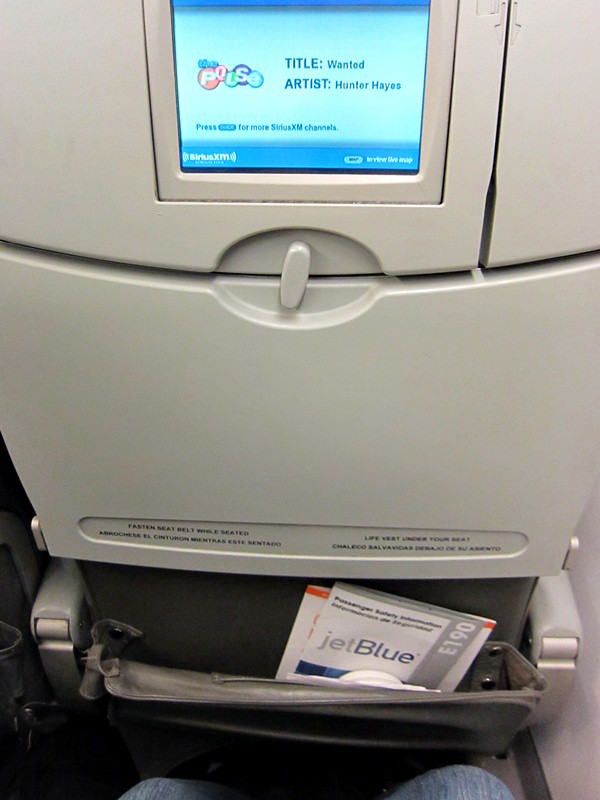 Safety card and inflight guide, similar to the A320s. 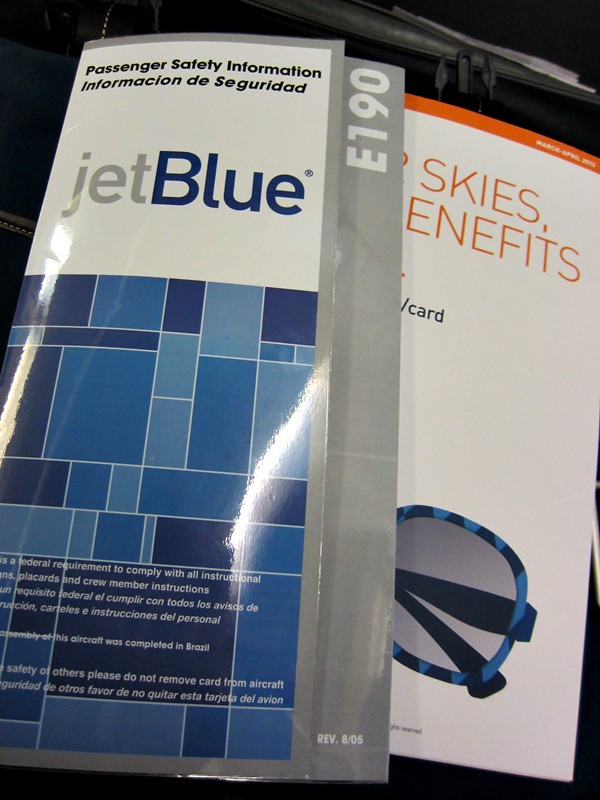 Boarding in progress, with seated passengers already channel-surfing on the DirectTV. 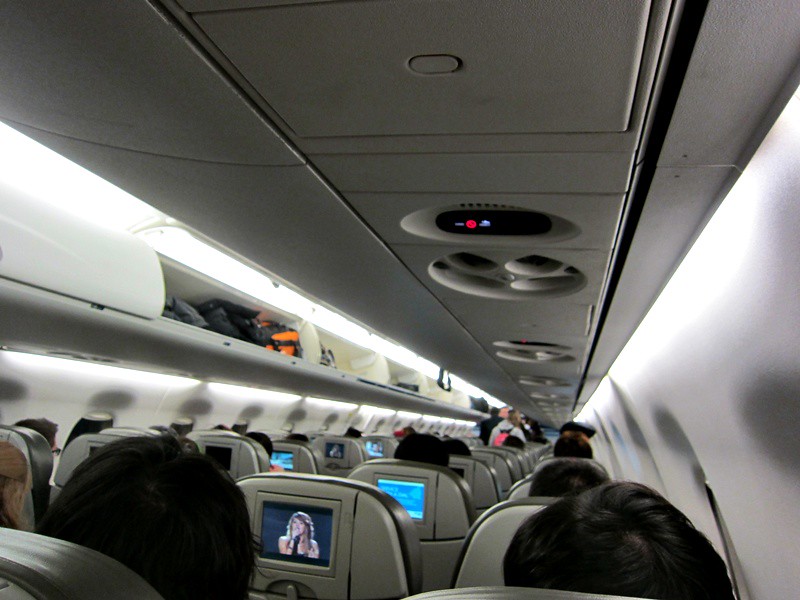 Plane being refueled. Another thing noted was that the windows of the E190 are huge! 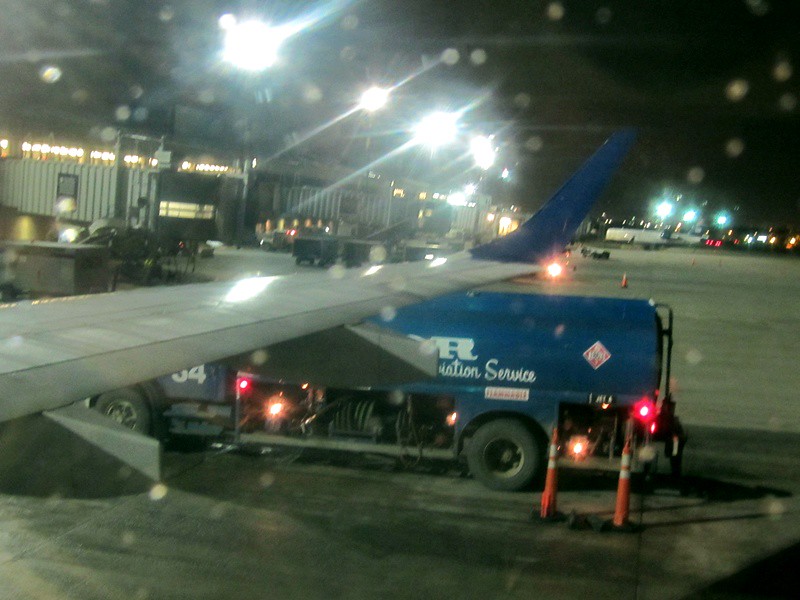 Very soon, all passengers were aboard. Almost a full flight this evening to JFK. Safety demo done manually and flight time announced as 1hr. We pushed back and taxied to Rwy05. 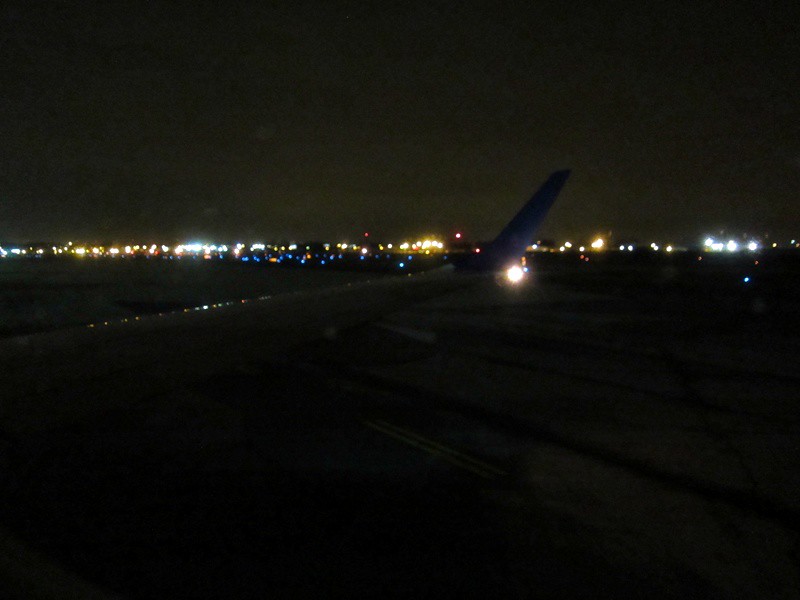 Takeoff from Rwy05, heading back to JFK.


We would only be cruising at a low 20K feet tonight. In fact, most of the time we were flying in the clouds, with lightning flashing out the windows. Surprisingly there were only minor turbulence, even though the seatbelt signs were kept on for most of the flight. 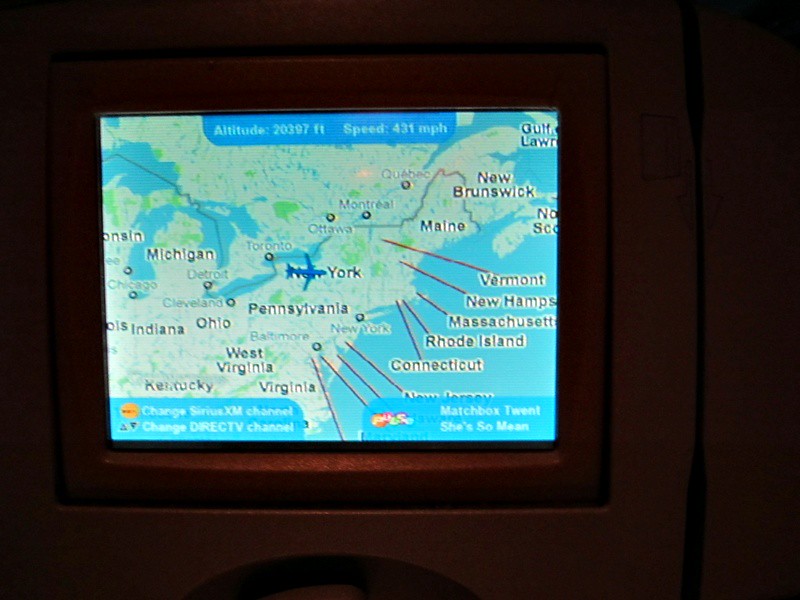 As briefed in the service announcement earlier, the Express service for this short flight would consist of a choice between animal crackers and mixed nuts, and beverage choices of water/coke/diet coke/sprite. Again, snacks were first offered from a basket, which the friendly female crew, who was conducting service at the rear half of the plane, offered us both choices each. This was followed by drinks from trays, where I had a Sprite. We were offered whole cans each, with cups of ice also available. I was seriously impressed with jetBlue for having so many cans of beverages on offer! On full-service airlines, SQ included, passengers were normally only served a plastic cup full. 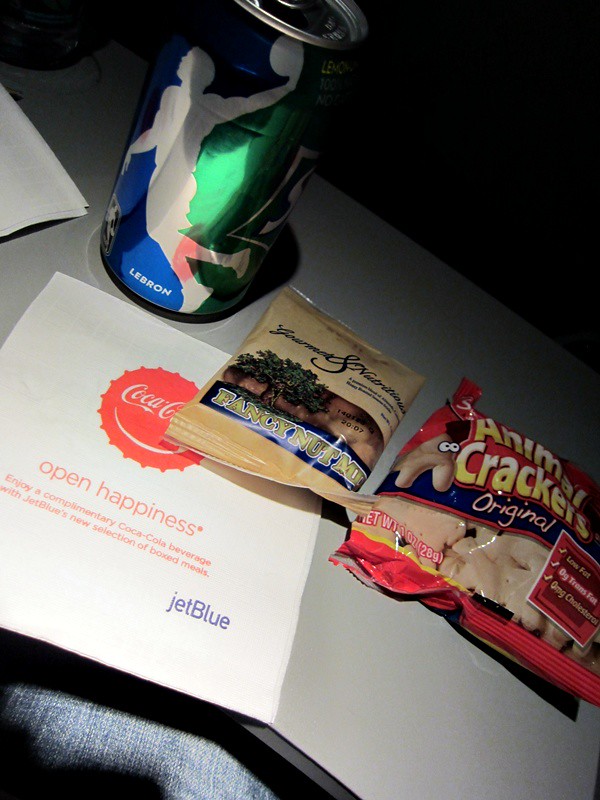 Animal crackers and the delicious mixed nuts. Again, more than sufficient for the very short flight. 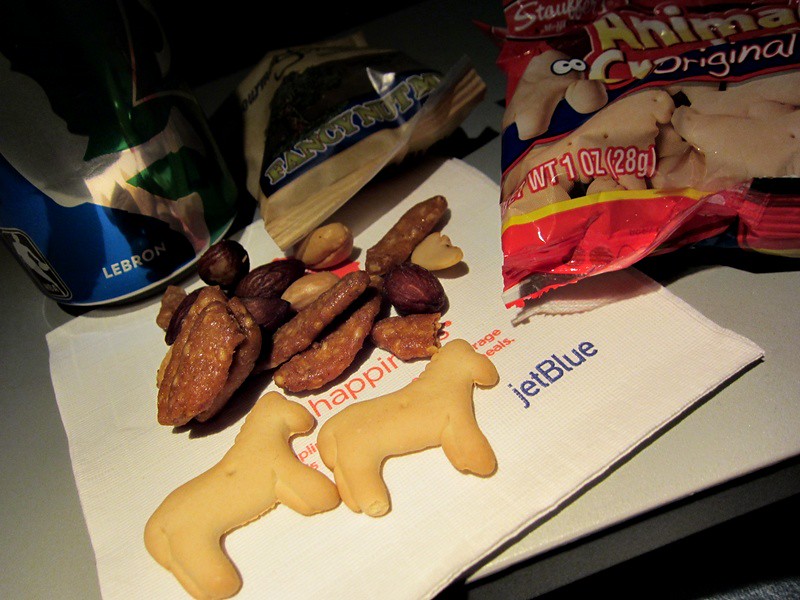 Watching the latest episode of Glee on Fox channel! 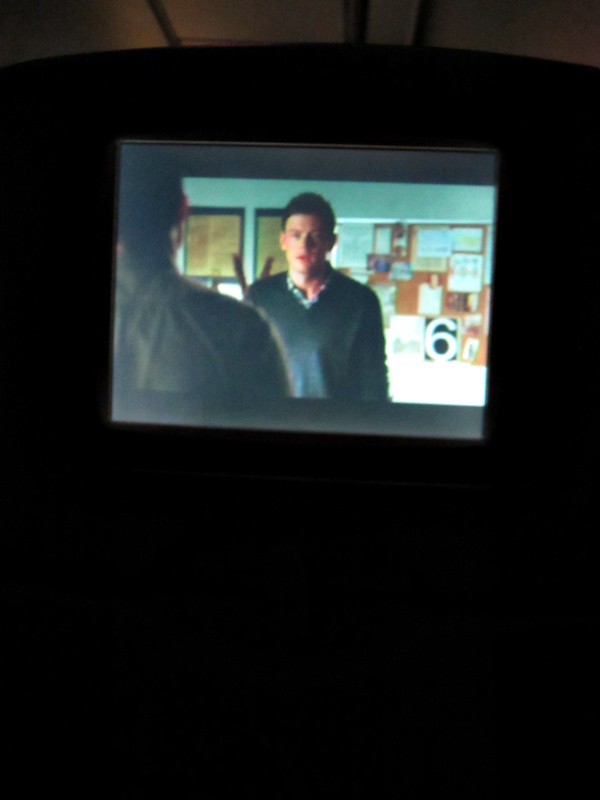 On jetBlue, cabin lights were kept dimmed throughout on night flights. The lights were only switched on for landing preparations. 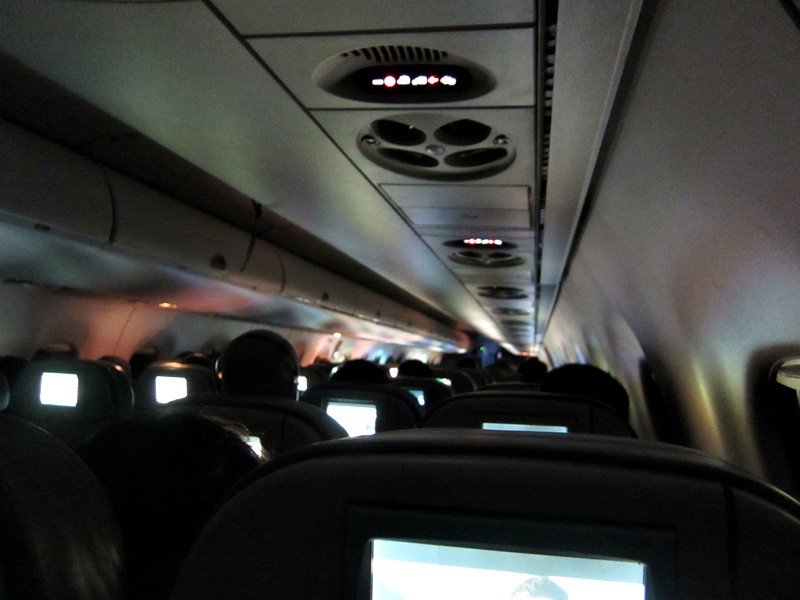 Lavatory of the E190. It took some time for me to locate the 'Flush' button. See the blue button above the toilet roll? I initially thought it was the cabin attendant call button! 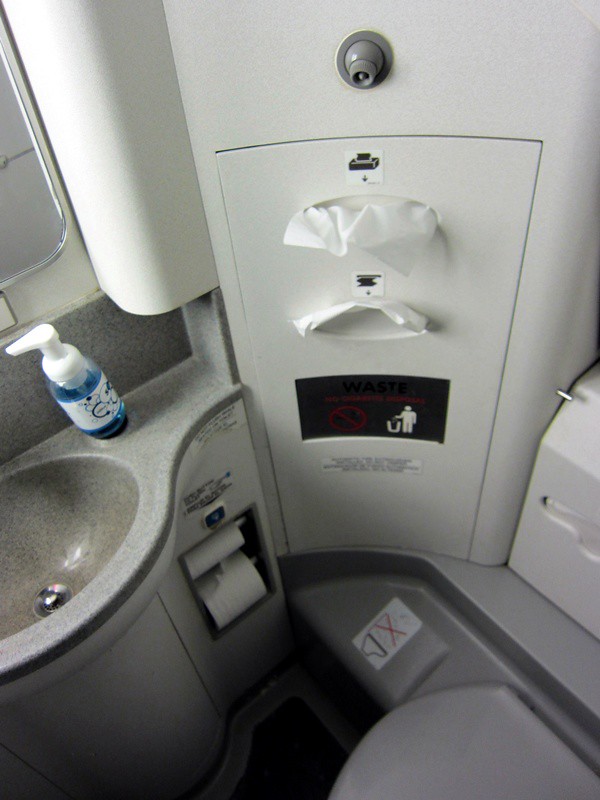 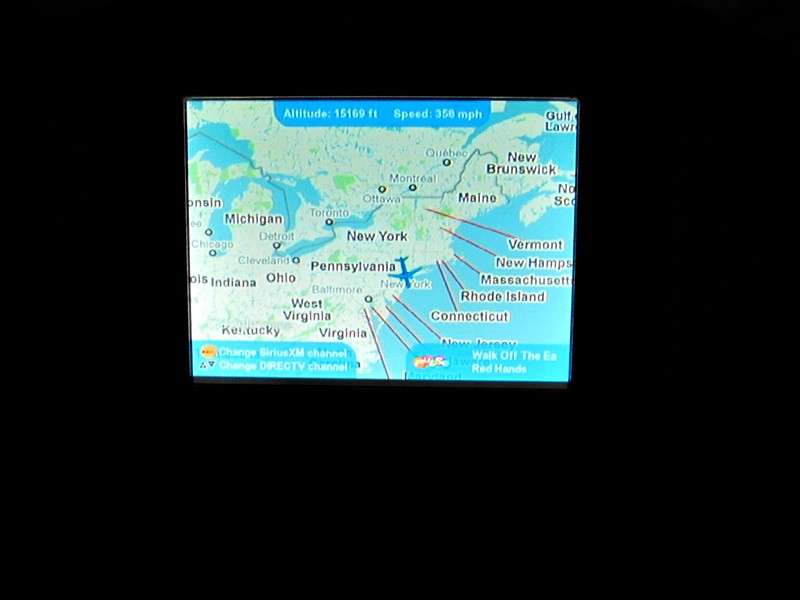 We landed on Rwy31R from the south.


Parked at Terminal 5. It was snowing rather heavily by now. 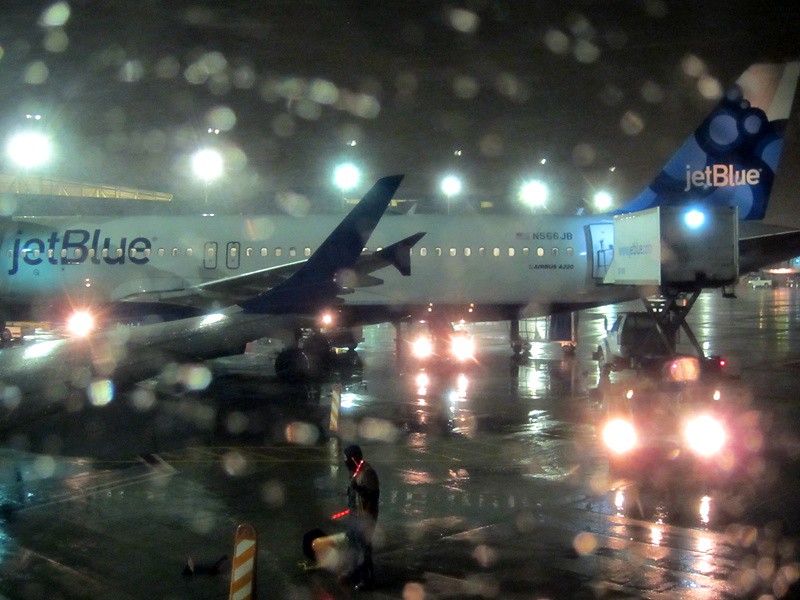 Disembarking. Comfortable seat pitch on the E190 as well. 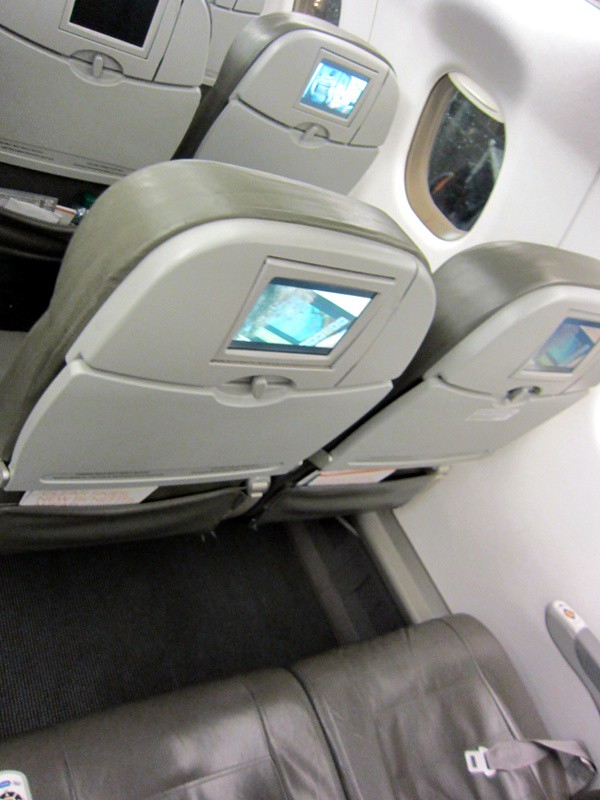 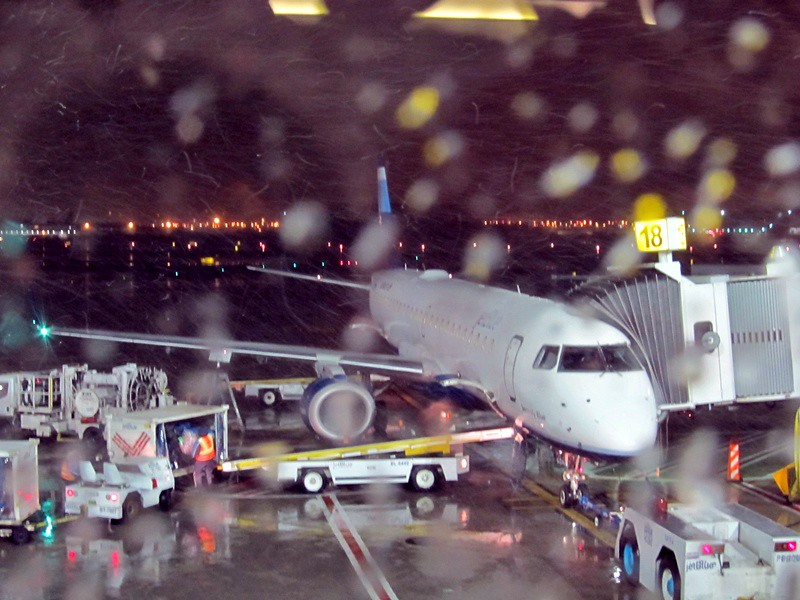 Luckily we had flew to Niagara Falls this day as the following day, there were major delays at all NY airports due to heavy snowfall overnight! Back to the hotel and rest for the night.


And this was what greeted me the next morning!

It had been snowing very heavily throughout the entire night till late morning.

Due to the heavy snow, we decided that it was not an appropriate day to explore NY city, and thus decided to go up to Woodbury Premium Outlets instead for some shopping! It was a correct decision as we felt as if we were shopping in winter wonderland!

After lots of shopping, it was back to Manhattan for dinner! By then, the snow on the streets had been cleared.

Again. a short and pleasant flight on jetBlue, despite the delay which was due to weather, so no fault of the airline.